sump dweller said:
I have never understood that 'ha - you lost to a girl' nonsense. It tacitly implies that men are superior, and shouldn't lose to women (which is a bunch of horse shit, especially when it comes to games like 40K.)
Click to expand...

I think that's precisely the point, and not too tacit either. As you say, a bunch of plop.
Reactions: Deleted member 10658
D

It’s not derailed just yet . To be honest, it’s a healthy topic, and it’s good to hear debate about something that isn’t Britain’s place in the European economic union lol. I didn’t mean to admonish anyone and I’m sorry if that’s the way it came off.

Besides, I think most of the derailment was caused by myself and @Resmire and discussion about our common experience. In fact, I think @Lyracian had a similar experience against @Edelweiss. I know my poor boy @Yaksam having won a battle against her watched as she rolled ‘full recovery’ for the 5 people he’d taken out of action and then proceeded to roll dead, dead for the 2 people she took down which included his heavy; she lost but her gang rating leaped up whilst he was left in tatters. He had to start again. I’m on the verge of starting a petition to ban @Edelweiss from playing any Wargames, she is an anomaly vortex. She is an anomaly of an anomaly because her anomalies are constant. She is the lasgun that takes down the bane blade, she is the proton torpedo fired without a guidance system that takes down a moon sized space station, she is the infection that destroys an army of invading Martians. She is Leicester City winning the premier league. @Edelweiss is the green in a red or black bet, she is the one who hits the small target in full cover that is fast moving with a BS of 2, she is the guardsman that defeats the hive tyrant in hand to hand combat. If @Edelweiss fell into the centre of a minefield she’d come out with an extra ice cream. She’s genuinely not bothered about her stat increases because even with a BS of 1 she’d still hit you in hard cover - and then you’d roll dead on the serious injury table despite wearing carapace armour and being hit by a thrown rock. She is the arrow in king Harold’s eye, she is the ball bouncing off Harry Kane's heel into the goal. She is the only person that would routinely win with a goblin only army (pre AOS). Edelweiss could roll a D6 and score 7. Don’t play Yahtzee with Eidelweiss, you may as well play “pointless” against google. She must be stopped before she ruptures the space-time continuum. Edelweiss has lead to a new branch of mathematics called improbability. If you need your new Juve to take down a bloodthirster, get edelweiss to roll your dice.

Don’t believe me? Ask @StusIdle what happened to his pitslave in the THUNDERCUBE!! Despite destroying the 3 other guys and charging Edelweiss, who up to this point had achieved nothing other than moving 2” and shooting 3 of her own fans - he proceeded to roll 3 ones on his attack dice and watched in horror as her pit slave nonchalantly picked him up and lobbed him into the death pit. She finished 3rd overall out of 25 despite having killed twice as many of her own fans than she did other pit slaves!
Reactions: Stoof, Gdolkin, radulykan and 9 others

I've just listed this all off to Katie on her phone, she's roaring laughing! Shes a monster!
Reactions: Stoof and spafe

Sorry for the derailment folks lol, back to some good ol’ fashioned terrain!

Sort of glad I missed the boat for Tribemeet 2019, I was sorely tempted to plaster everything in poster paint and have done with it readfor the event. Now I’ve decided to add a fuel tank to my “pond of death” terrain tile, here’s the progress: 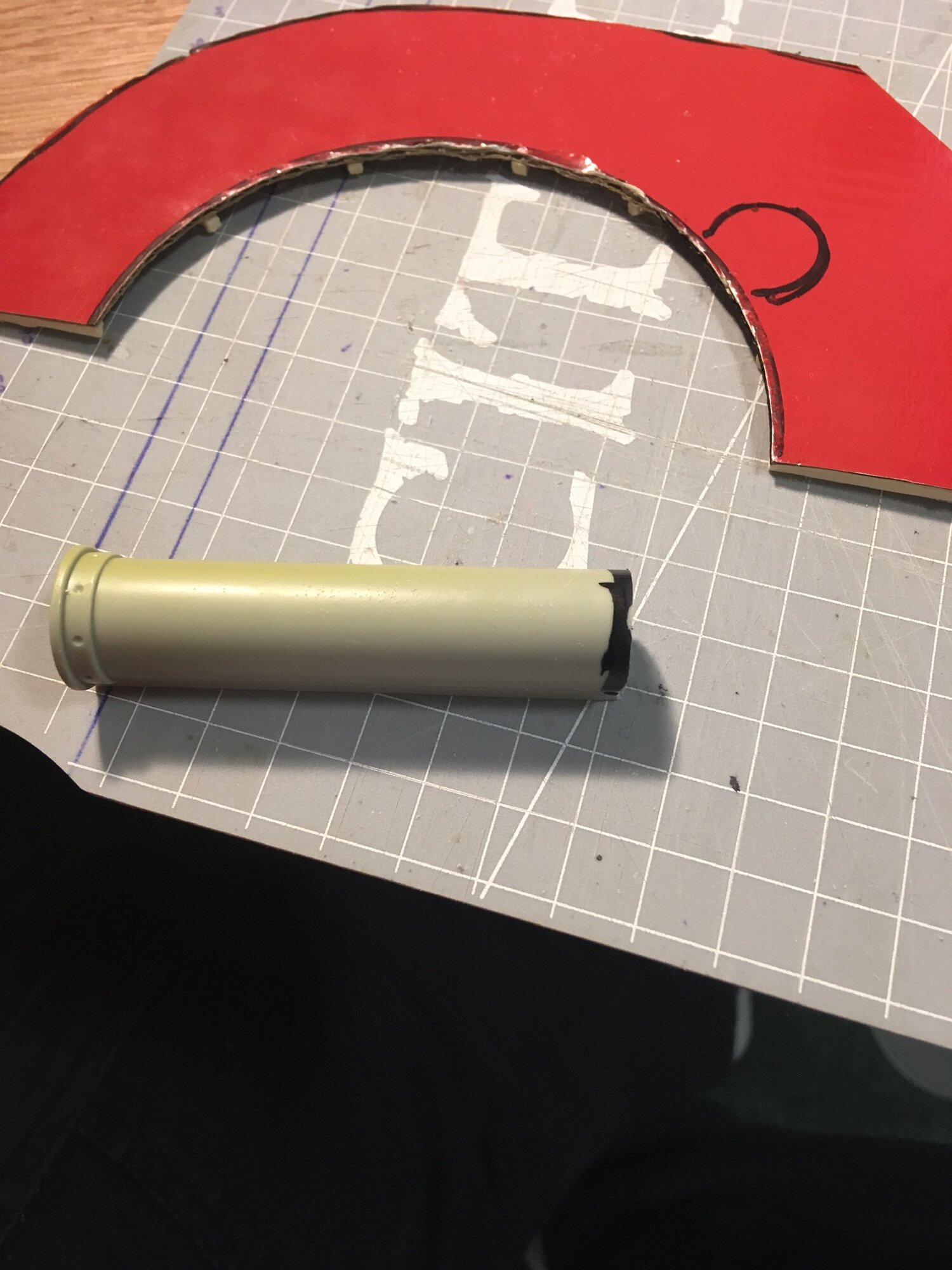 Marked out a bit of cardboard to be the walkway then cut down a length of resin pipe to fit it. The idea was to have something that looked legit but provided plenty of opportunity for falling in the drink. 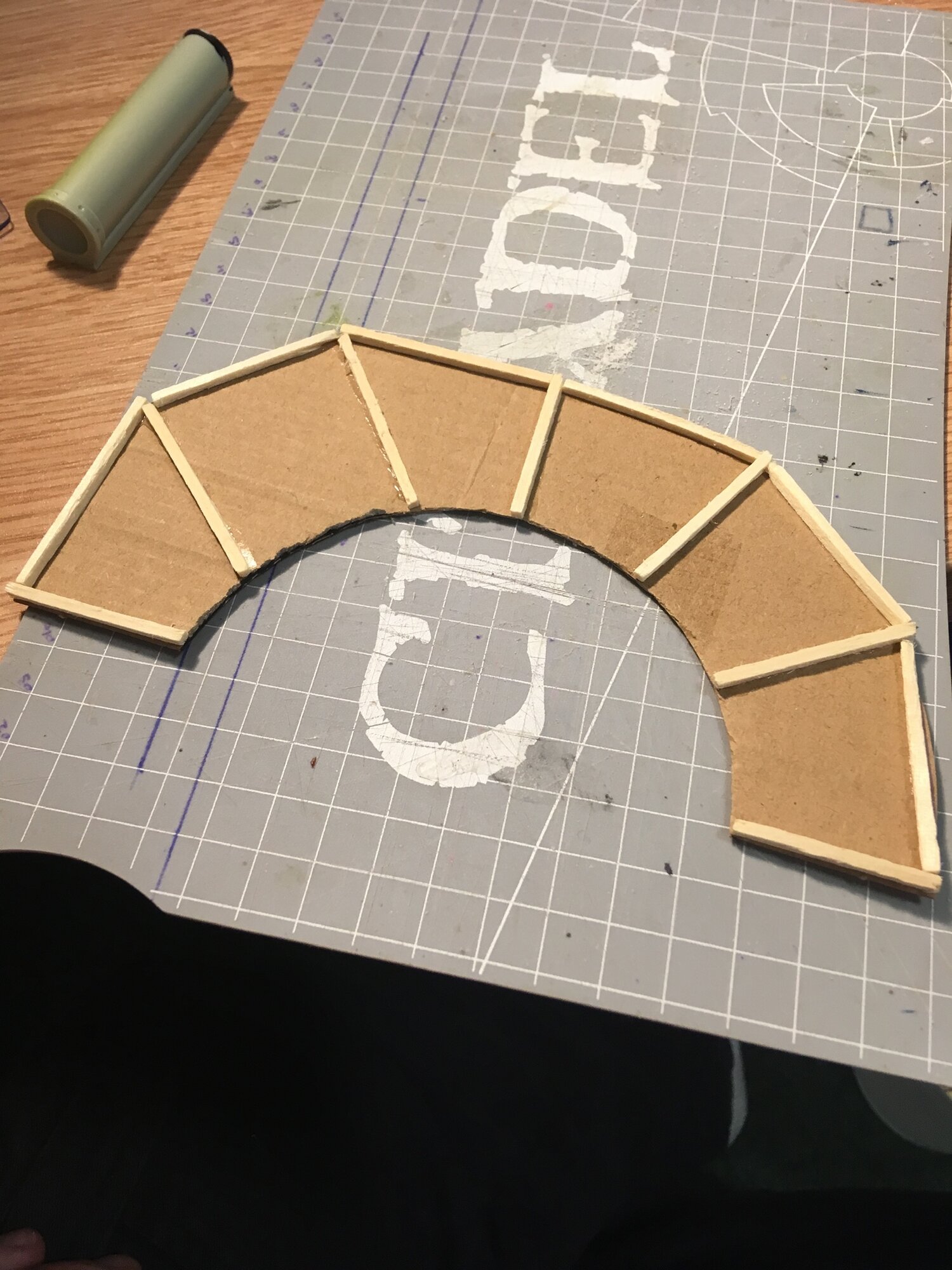 Nothappy with just a sheet of cardboard for the floor, I reinforced it will matchsticks from a craft store. 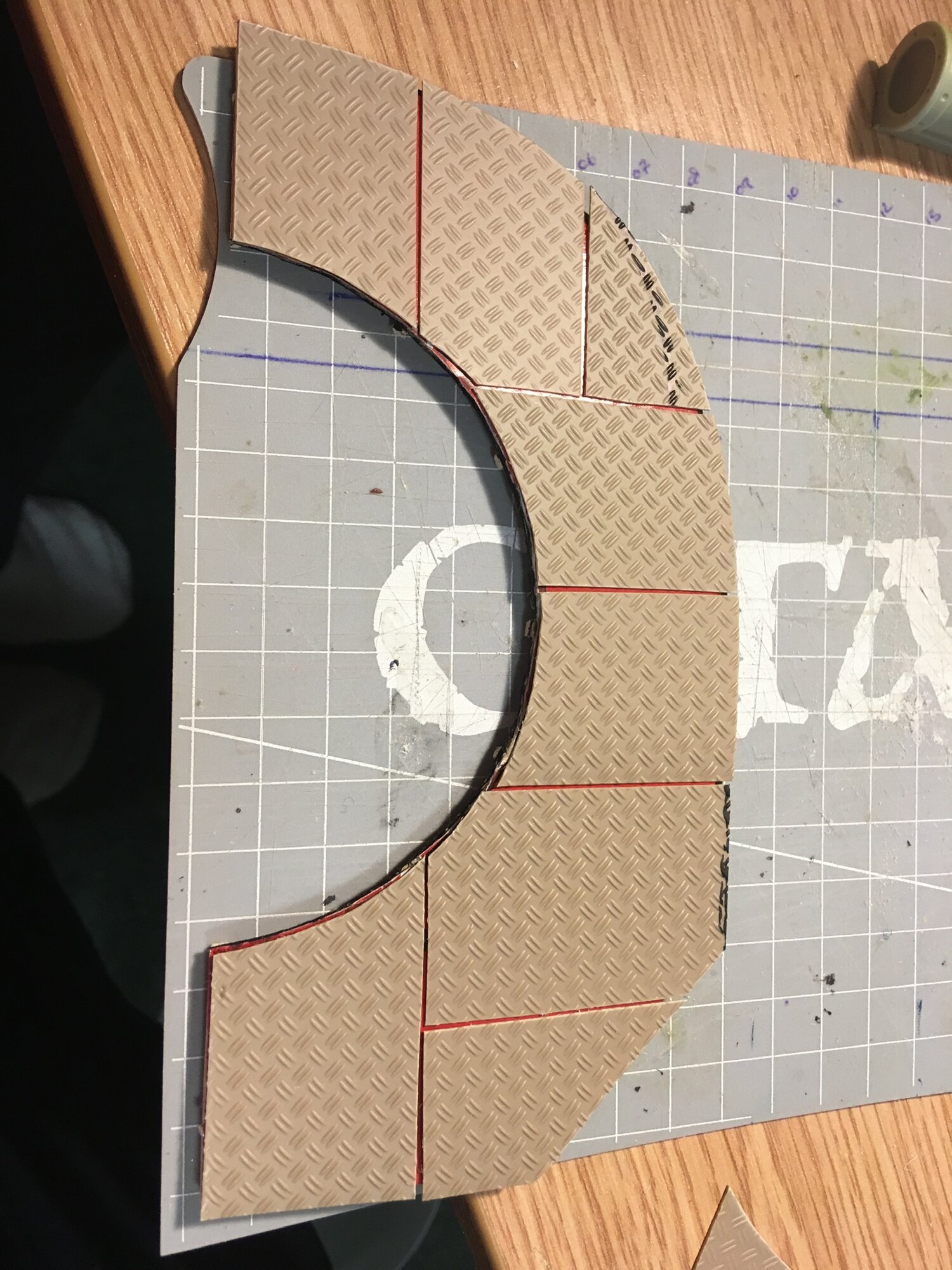 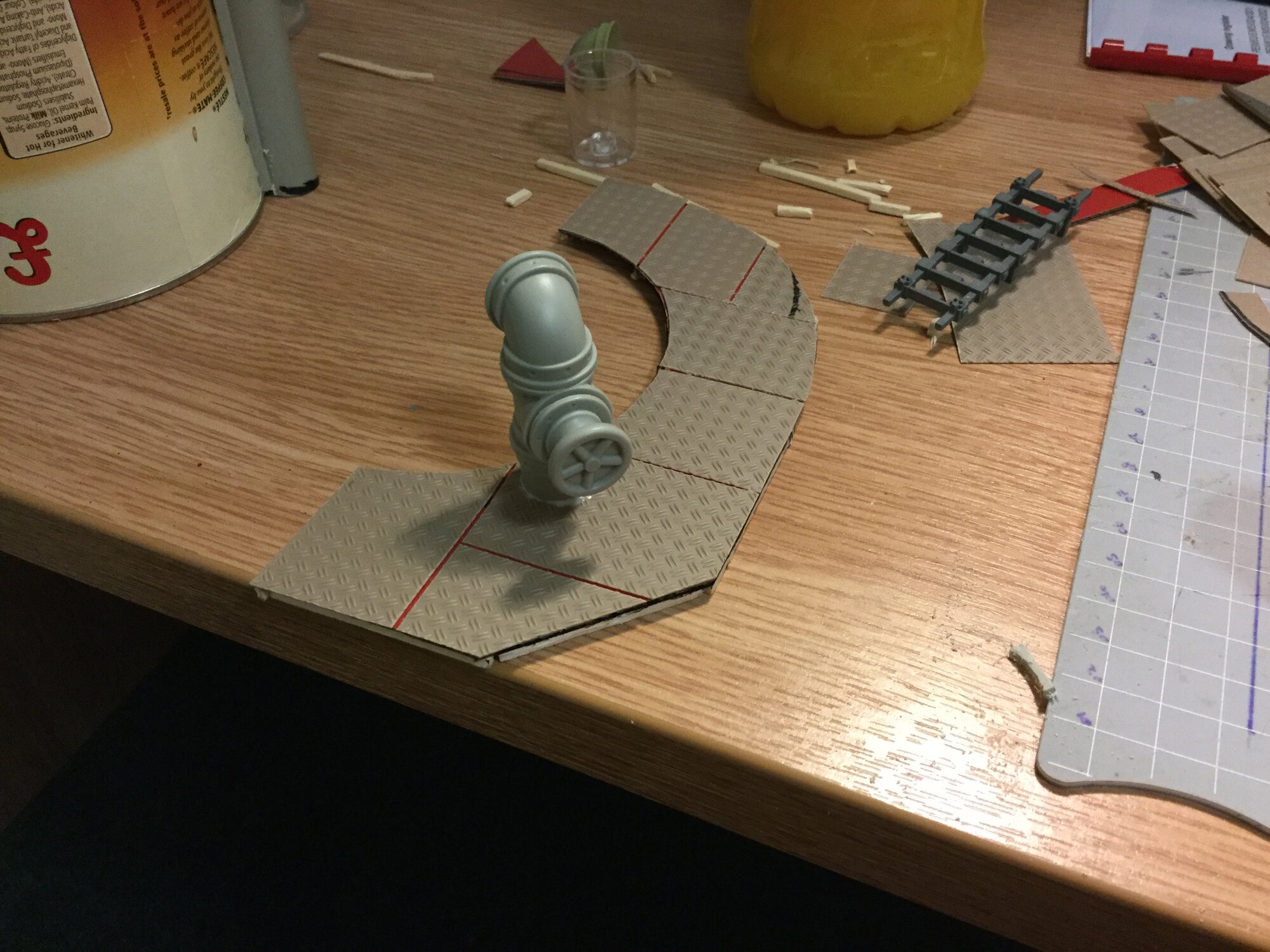 I glued some accoutrements to the coffee mate tin then did a dry test: 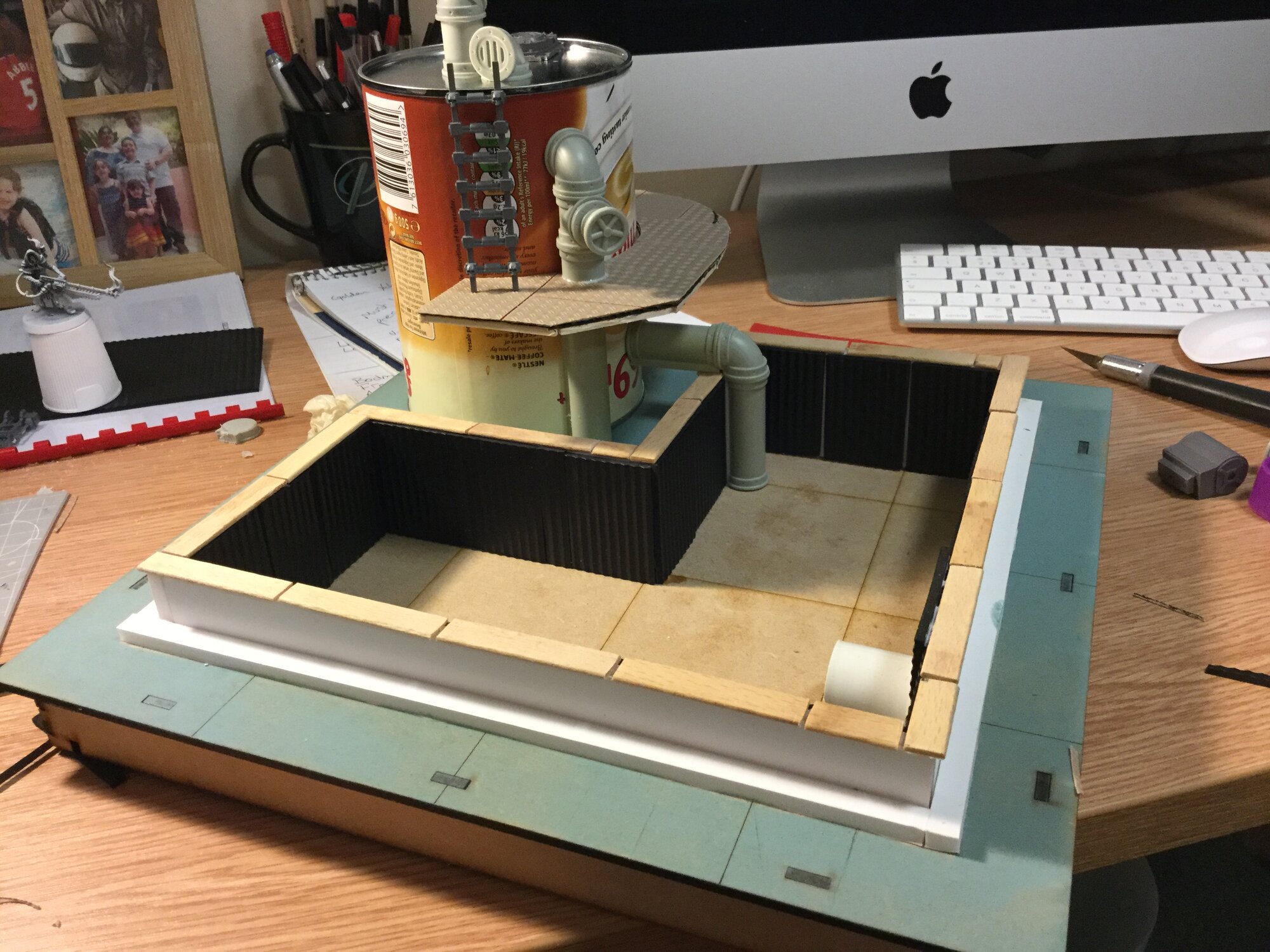 Note, by this point I had aLready lined the pond with corrugated material.
Reactions: KungFuPanda, ClockworkOrange, ThreeDice and 15 others

@MancInventor Looking awesome, how are you going to fill it?
Reactions: MancInventor

@Resmire I’m going for the slow and purposeful approach using lots of thin coats of varnish. I’ve also got a plan to have things floating in it!
Reactions: Resmire and dabbk

So you’re not going for my ‘actual toxic sludge’ approach then?
Looking great!
Reactions: MancInventor

CaptainDangerous said:
So you’re not going for my ‘actual toxic sludge’ approach then?
Looking great!
Click to expand...

I think I still have a t shirt with your “actual toxic sludge” on it!
Reactions: Azzabat and CaptainDangerous

I was merely helping to find the answering to an age old question.... “is that wet?”

Looking boss! Defo putting this into the list of ideas to rip off pile
Reactions: MancInventor
D

CaptainDangerous said:
So you’re not going for my ‘actual toxic sludge’ approach then?
Looking great!
Click to expand...

MancInventor said:
I think I still have a t shirt with your “actual toxic sludge” on it!
Click to expand...

CaptainDangerous said:
I was merely helping to find the answering to an age old question.... “is that wet?”

I am simultaneously intrigued and concerned by this conversation, and I am not sure if I want to know what you two are talking about

MancInventor said:
@Resmire I’m going for the slow and purposeful approach using lots of thin coats of varnish. I’ve also got a plan to have things floating in it!
Click to expand...

Awesome, I will be watching closely since i want to do some liquid pours and I want to see how it works. I was looking at water effects but they're stupidly expensive!
Reactions: MancInventor

Even before paint/effects, it's a lovely looking piece. Really looking forward to seeing it develop.
Reactions: MancInventor and Resmire

Thanks for the support guys.

So, I’m currently not in the country for a couple of weeks, internet is scarce too. But before I went I tried out a little something I discovered quite by accident.

Drawing notes on the back of a pad with a mechanical pencil and the lead snapped making a nice impression in the card. Looked just like a 40k scale rivet! 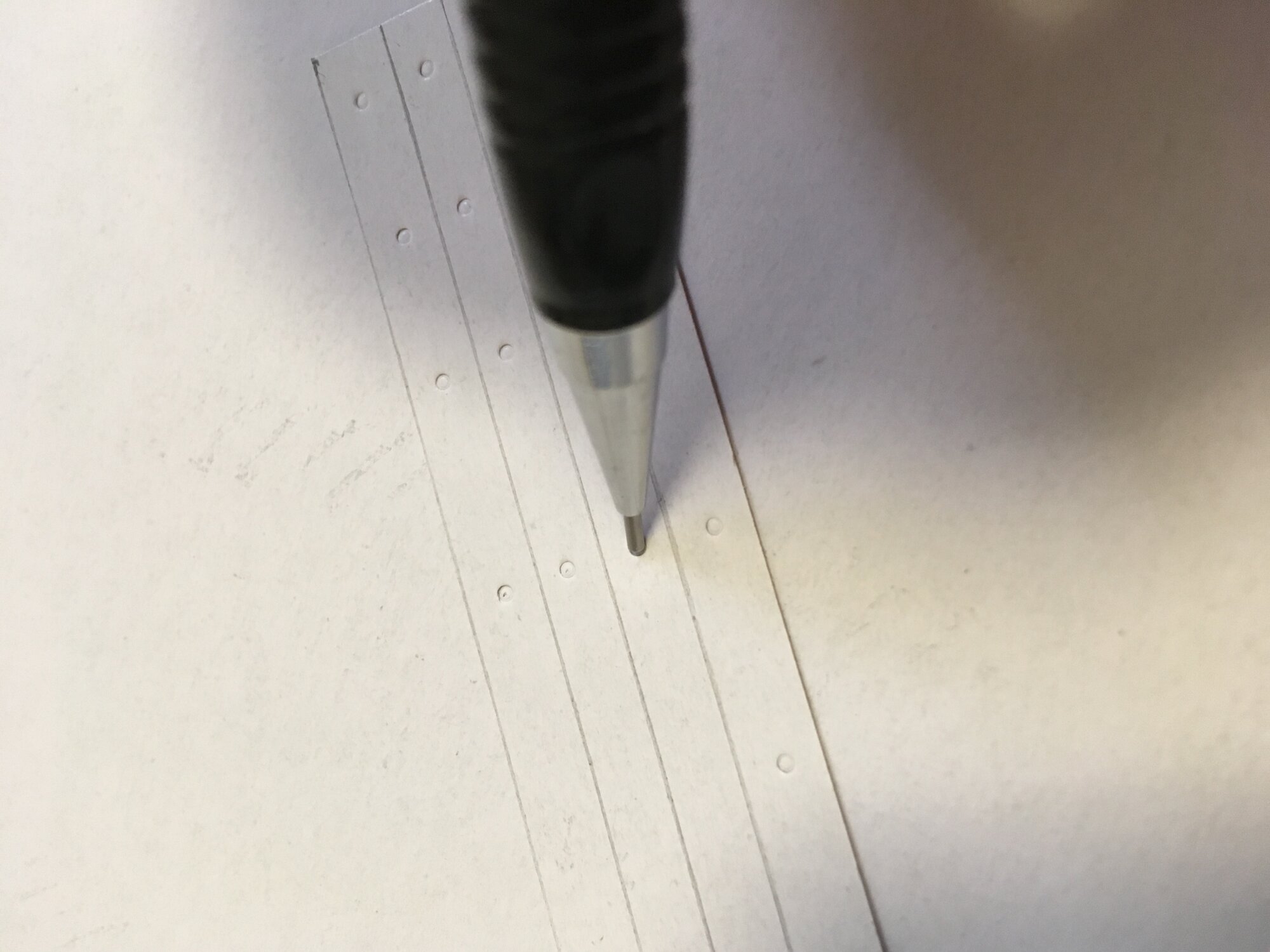 I measured the fuel tank and drew out some strips and embossed the rivets at regular intervals then I cut the strips out: 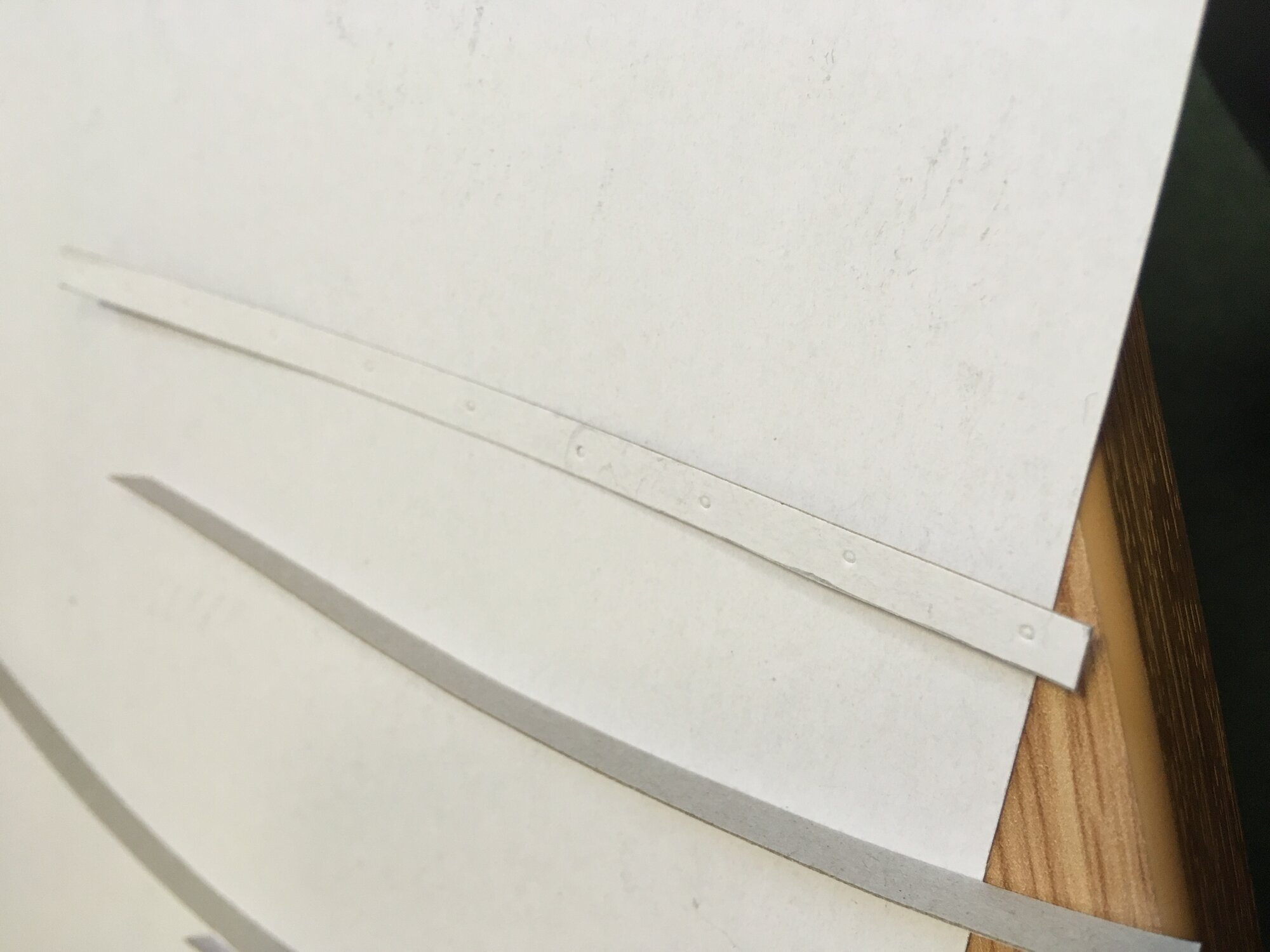 I’m really happy how they turned out. Then I just stuck them in position: 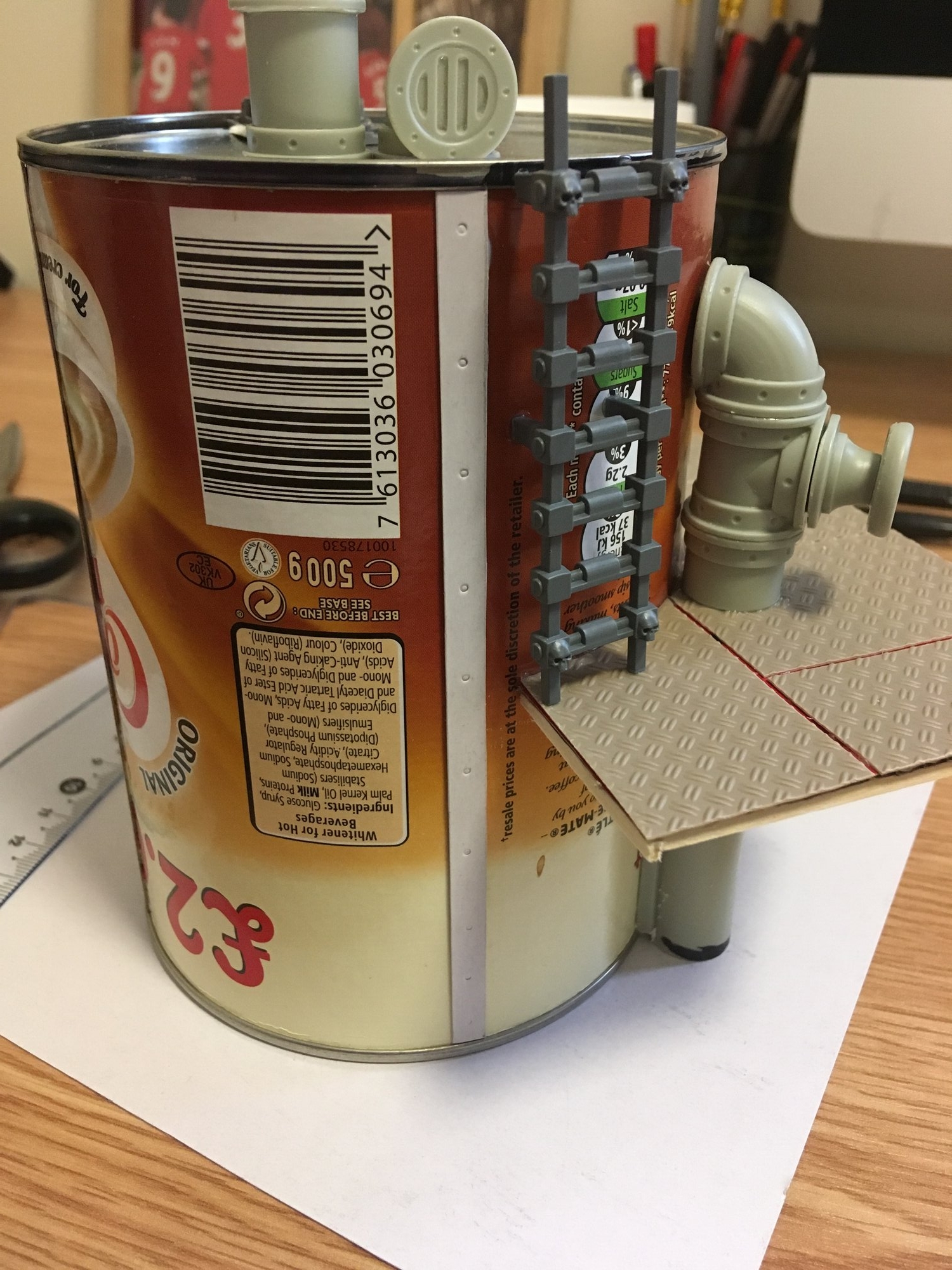 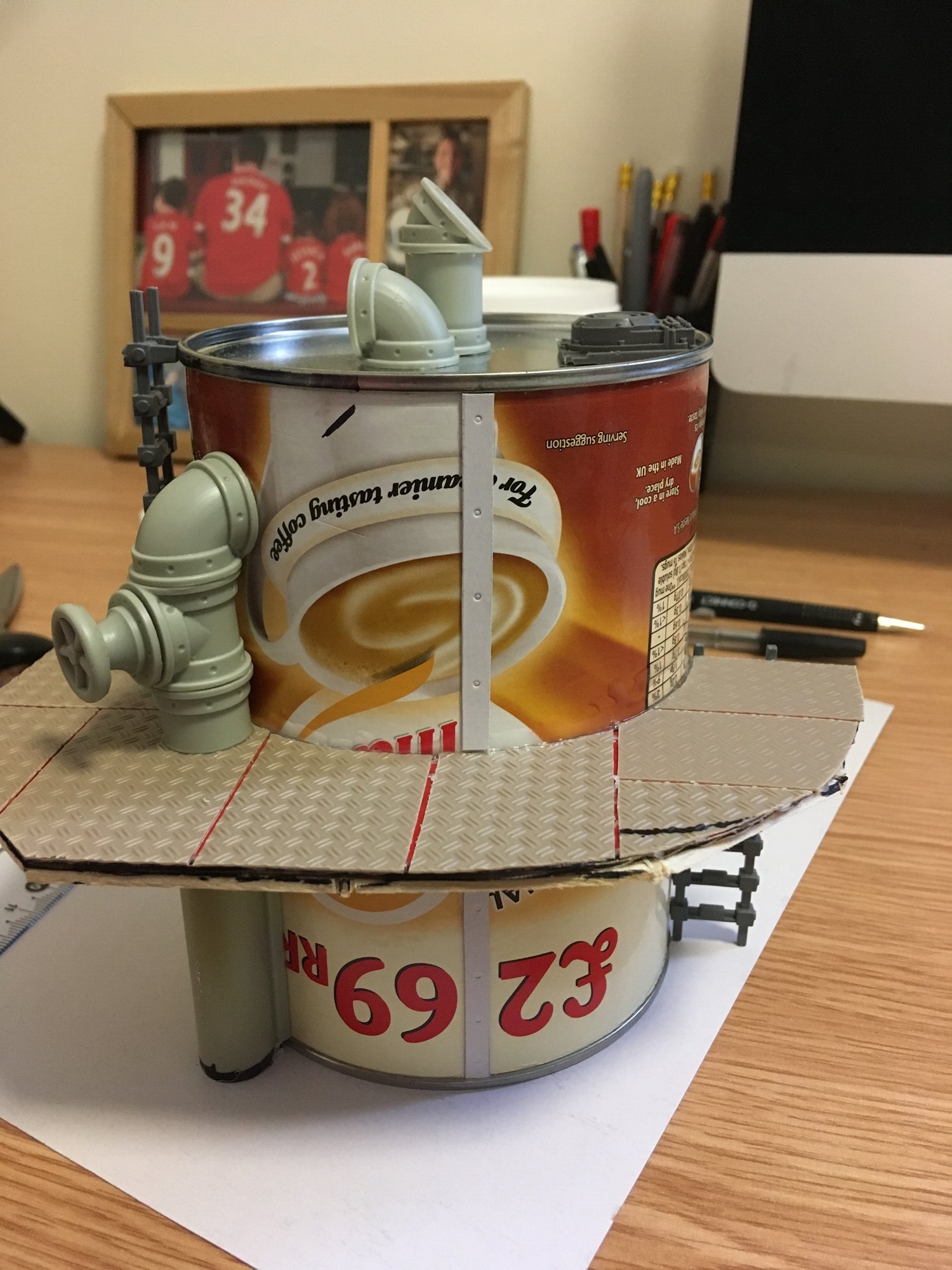 And it’s not all bad being here, when in Gibraltar: 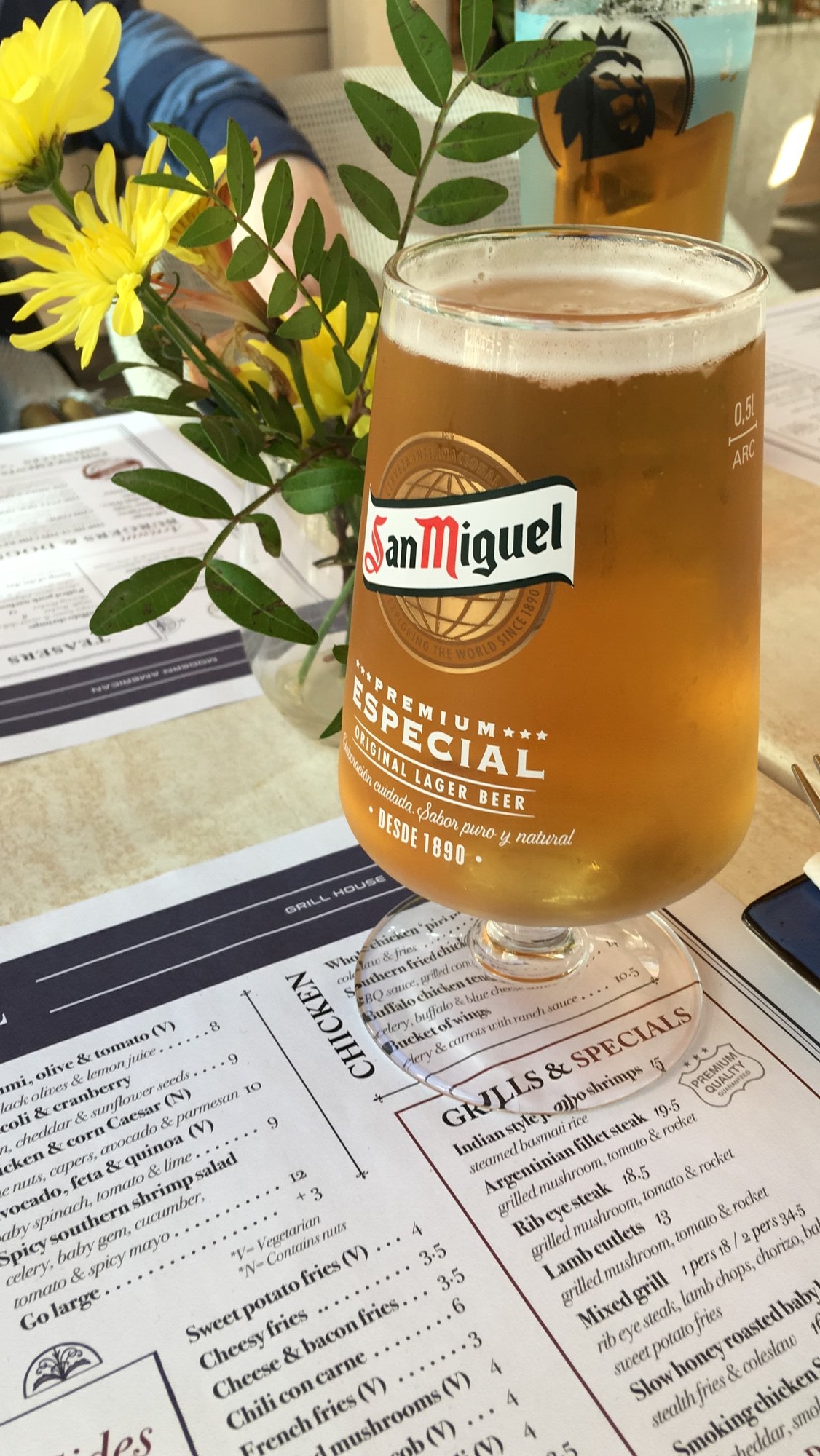 Such a hard life.

And here’s me not allowed beer until May. Voluntarily as well. Ah well, the dumb/smart balance is restored.

I’d love to see how those rivets come up when painted.
Reactions: Deleted member 10658, Resmire and MancInventor

About time we had an update in these parts. What with all the TT combat canal board pictures that predate mine and are therefore dirty copies/clones..
Reactions: Resmire and MancInventor

There’ll be a couple of updates soon, now I’ve repaired my airbrush I just wanted to lay some paint down. I’ve got an event I’m organising next week, after that I’ll be back in the game.
Reactions: ClockworkOrange

@MancInventor if you use resin Mixed with paint I don’t think you need to fill the groves on the board.
Show hidden low quality content
You must log in or register to reply here.