So, new Necromunda, new log! This doesn’t mean that I am abandoning my futile thread of unfulfilled and broken daydreams, but this one is going to be separate for my N17 gang(s).

Well, @Yaksam and I, like so many others no doubt, got Necromunda Underhive from Santa. YakSam took the Eschers leaving me with Goliaths. I’m not overly disappointed to be honest, I’ve had a Goliath gang before and enjoyed painting them up and I do like the new look so I started off with a bit of snip-fu to see what I could do without greenstuff:

This is my gang, TheWrecking Krew, glued together about 3 days ago. 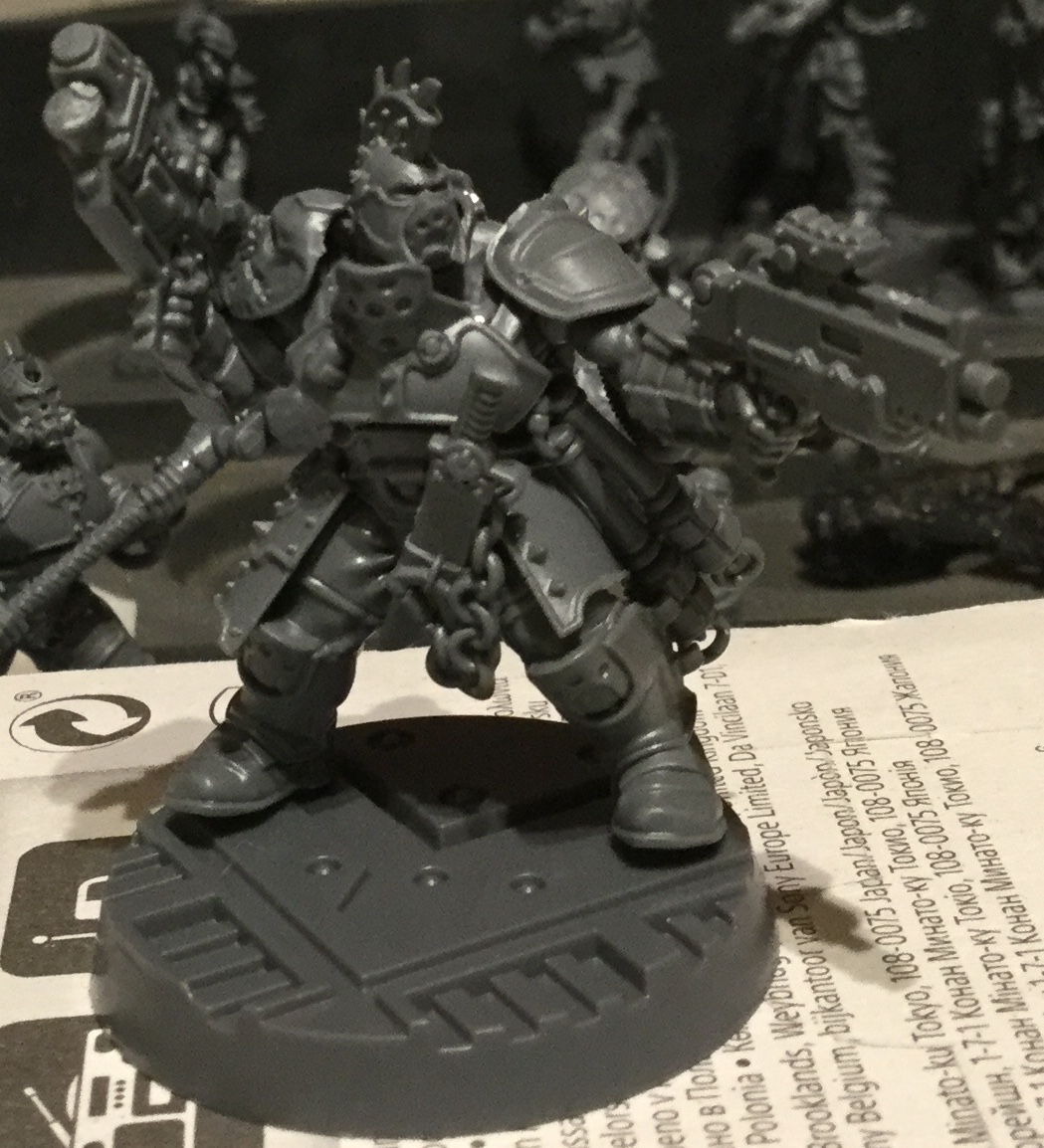 The leader Rex. I just tooled him up to the point he almost looks like a space marine. A simple hand swap for the combi pistol onto the grenade arm and I had to hack away quite a lot of the neck to get his head seated naturally looking down the shotgun. When it was all finished I realised that it wasn’t quite right, he was ‘front heavy’ with a really bad/ unnatural posture, so when I stuck him to the base I glued his heels down into a recess and this just straightened his whole body up and made a big difference. There’s a small gap now under his toes; I know it’s there so I might just fill it, otherwise it will make me itch. 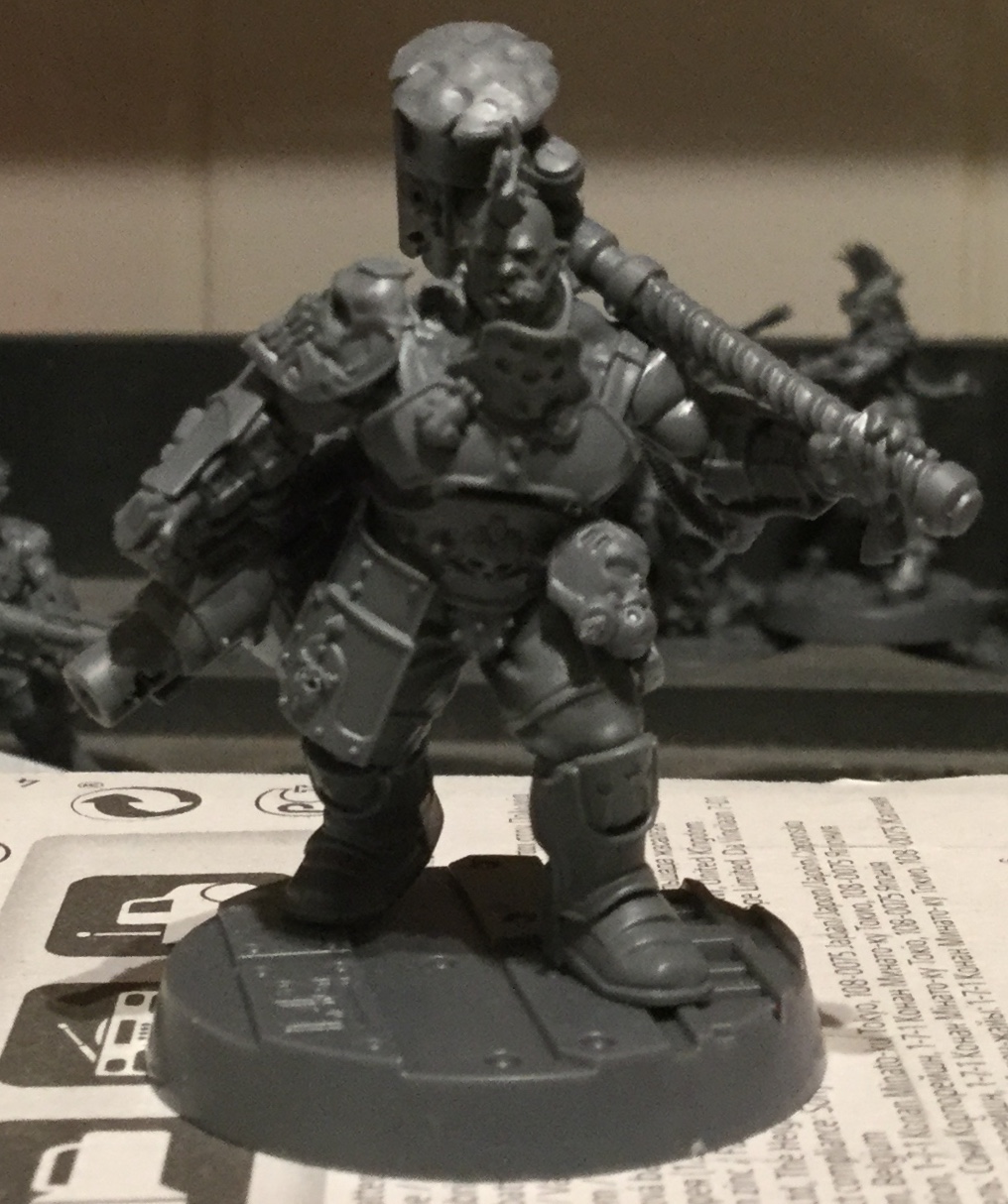 This is my champion Brutus. He was originally the leader until he spent 3/4 of a game trying to reload the grenade launcher after @Yaksam played the ‘click’ tactic in turn one. Git. Anyway, nothing fancy here, just an alternative weapon selection. Oh and an up-side-down leg plate. I’m going to file the glyph down before painting. 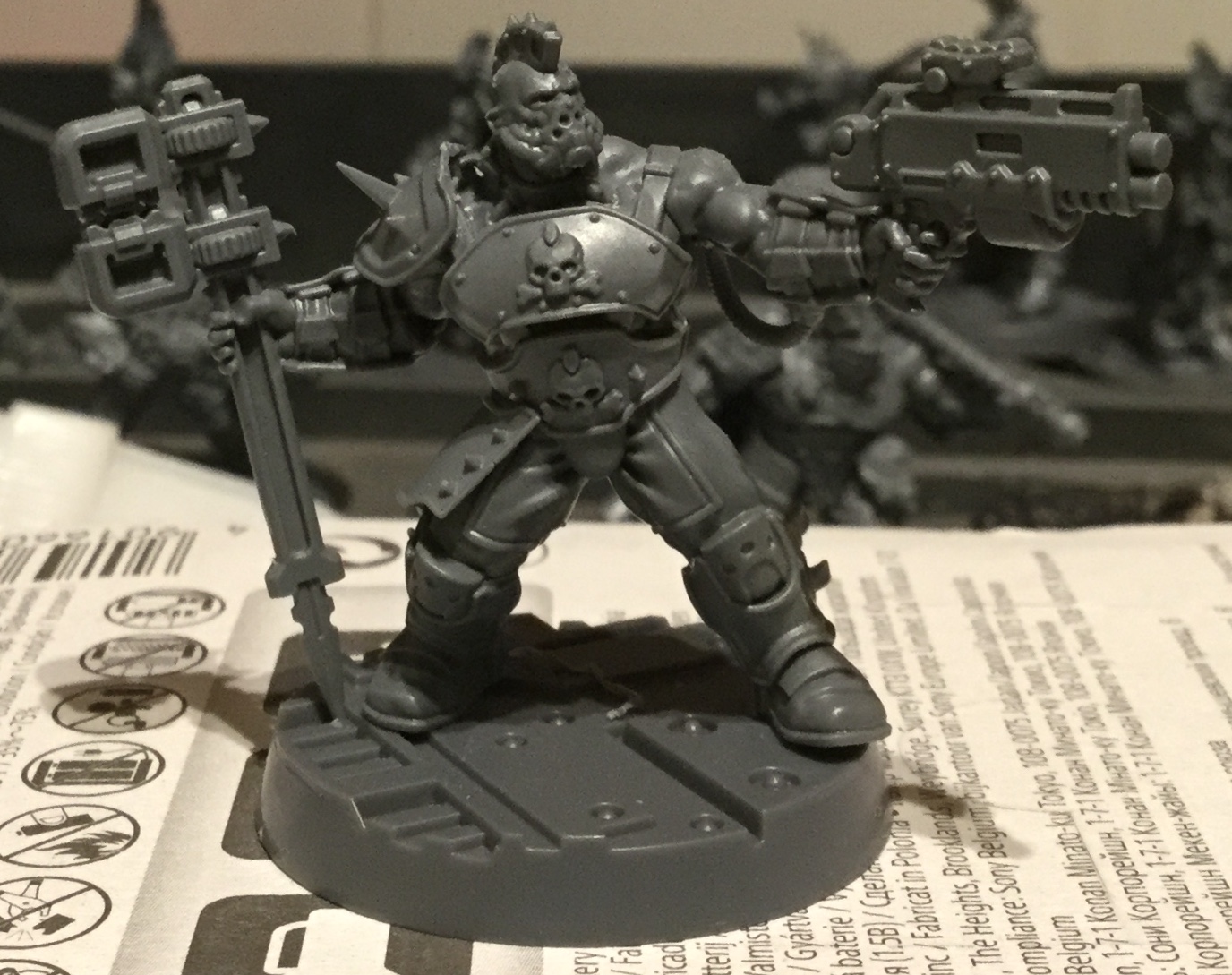 I’m cheating with this one, because a little bit of greenstuff is required at the elbow, but I love this pose. He was a champion in the first gang, now Brick is just a ganger! 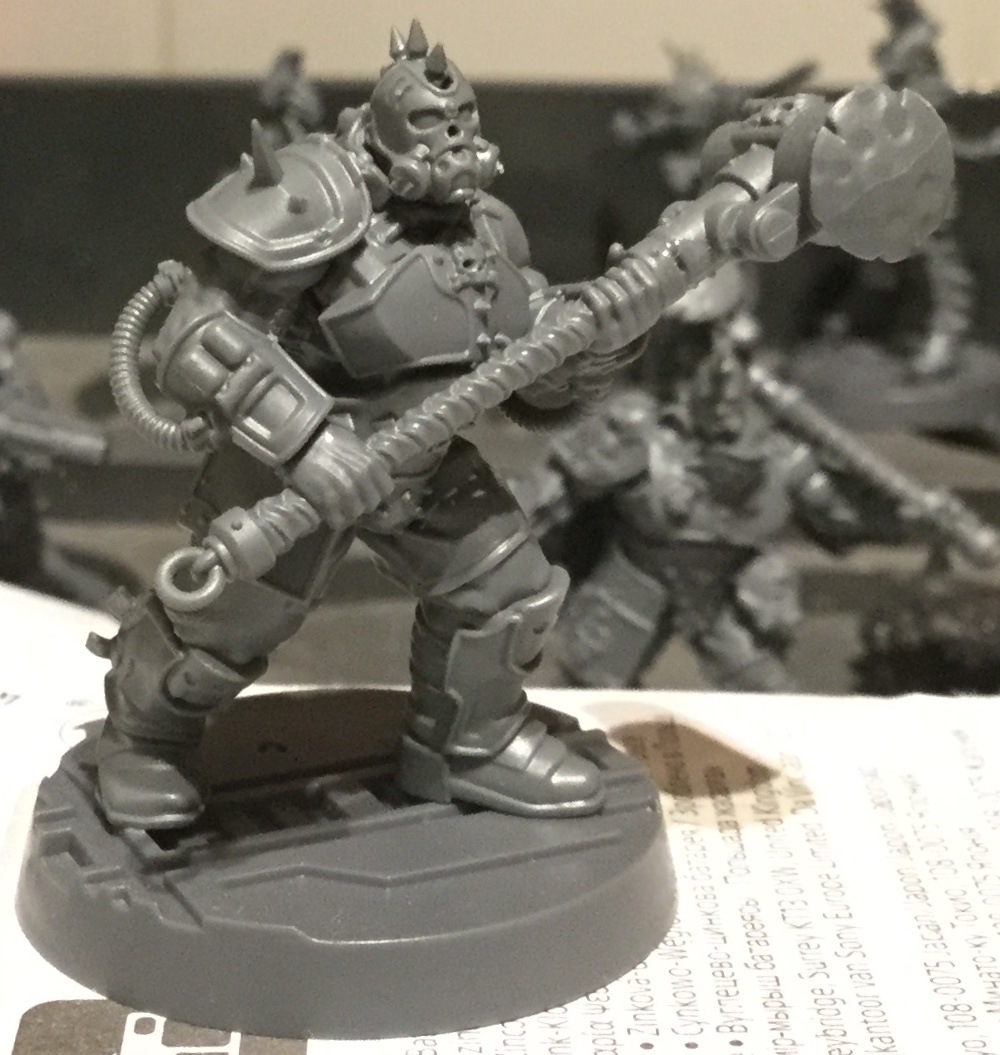 This is ‘Arry the ‘Ammer, snipped the head of the (in my opinion) goofy looking renderiser and swapped it to give him a massive power hammer. Extra long pin used on this to keep the head in the correct angle from all directions. When the parts arrive, I’m also going to strap a shotgun and knife onto his back (from an ork nob sprue).

These three finish the gang off. Not really done anything other than drill out the gun barrels. I’ve left all the extra armour plates off of the guy on the right, Pitbull, because he’s going to be my Juve. It’s a small difference but this, helped by the pose means that he’s not as bulky as the rest of the gang.

Most excitingly I’ve got the grudging approval from She-Who-Makes-the-Decisions to get each gang as it comes out.....Her one caveat being that the last one is painted and finished first. It shouldn’t be too difficult to paint 8-10 guys in 3 months now should it? (He says with approximately 1 month remaining until the Orlocks land!).

Will he make it? Stay tuned to find out.
Reactions: Mithrilforge, Deleted member 10658, chilipepa and 10 others

I think the pics might have flopped, @MancInventor...
Reactions: MancInventor

Oh dear, and it was all going so well. I think I might have messed up the settings on the album. I’ve changed them now, can you all see them?

Thanks for the heads up by the way

i could see them just fine (and they look great!)
Reactions: Deleted member 10658 and MancInventor

Surely with that incentive you can rope the juve into helping with hte painting? 2 brushes better than 1 and all that.
Reactions: Deleted member 10658, CaptainDangerous and MancInventor

Surely with that incentive you can rope the juve into helping with hte painting? 2 brushes better than 1 and all that.
Click to expand...

Very true, but the Juve has a glut of Eschers to paint!
Reactions: CaptainDangerous and spafe

great little conversions to get a unique look to your goliaths ! very good!
Reactions: MancInventor

The pics are working for me now and the assemblies look great!
Reactions: MancInventor
D

Great work with the little tweaks to make them more individual - it seems like you can't really go wrong with these models (I may have to buy a box of Goliaths, even though I already have a Goliath gang, they don't compare to these new ones!)
Reactions: MancInventor

Started painting. So far I’ve painted the skin, basecoated and applied the first wash to the trousers. 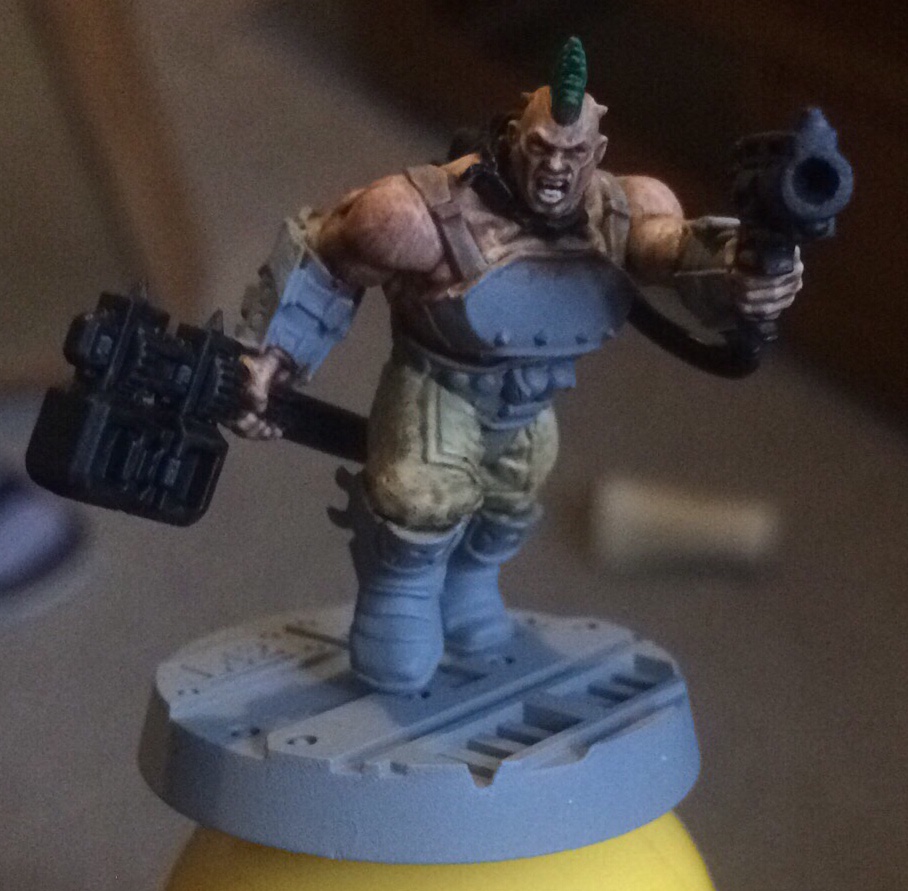 Skin done & first layer + wash on trousers.
Still not decided on a colour scheme yet. What I do know is that I’m steering away from black & red, that’s how I painted my last Goliath gang and I fancy doing something different. I’ve batted a few ideas around but I think I’m going to settle on a murky blue similar to the GW Tempestus Scions, but a bit more bashed up and weathered.

I’m hoping to get a lot done in the next week because I’m overseas for a month next Sunday, but we all know what happens to the best laid plans etc.
Reactions: Mithrilforge, CaptainDangerous, Halbling and 4 others

Nice choice with the green and blue. I'm pondering color choices for my Goliaths myself, and want to avoid the "official" scheme.
Reactions: MancInventor

is that blue your primer? i kinda like it with those pants.

Punktaku said:
is that blue your primer? i kinda like it with those pants.
Click to expand...

No, it’s a bluey-grey primer I used to undercoat the model. I must admit, I was thinking about working with it because I like it with the trousers too, I just thought it might end up looking a bit wolf-scout lol.
D

Great job on the face (I like the effect you have achieved on the skin - it loos like he is dirty, as if he has been too close to something sooty and ashy.)
Reactions: MancInventor and neil101

Added a bit of layering to the Juve: 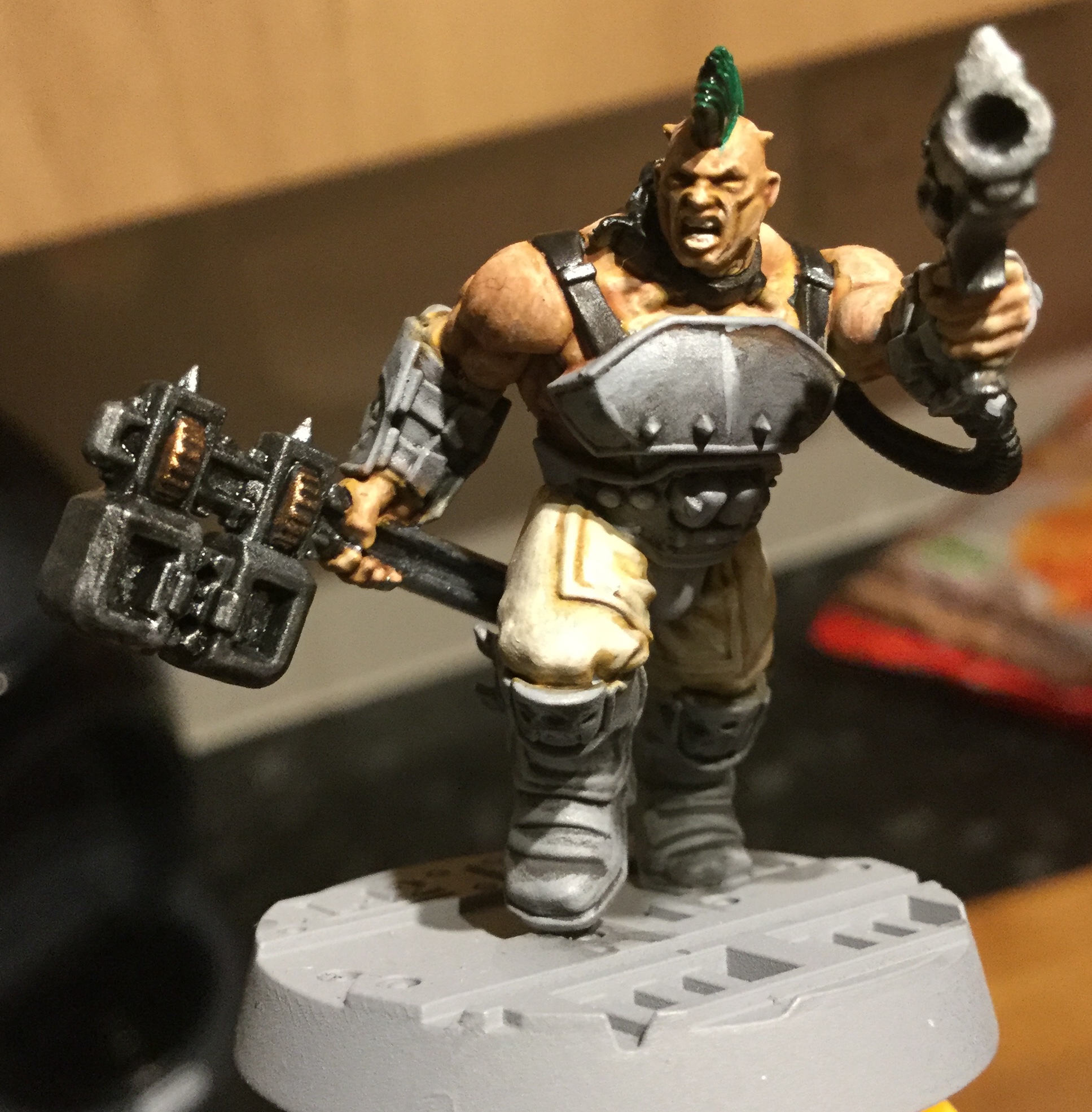 I decided to stick with the bluey grey for the armour. I’ve got a bit of tidying upto do, a highlight on the Mohawk and a bit more work on the metal. I’m undecided on leaving the straps black or making them another colour.

Lastly I need to decide what I’m doing with the base - do I make it a typical Zone Mortalis paint job or somehow match it with my game table. Decisions decisions lol.
Reactions: Mithrilforge, ThreeDice, Bilbostomper and 1 other person

I think it looks best if the bases, terrain and table all match.

Nice white on the pants, by the way.
Reactions: MancInventor

i dunno. sometimes it looks better when the carpet doesn’t match the curtains.
Show hidden low quality content
You must log in or register to reply here.

J
What do you think of this Campaign from A Dream I had last night?

J
N18 Can you do The Gang Cards for me and my Brother?

R
What I've been doing recently, a painting and modelling log...