So, I decided to get my own thread going. Updates will range from sporadic to non-existant, but hey, such is life. I am hoping to get some good feedback and advice from this awesome community, so don't hope for anything extraordinary here. There is some serious talent on this site (you all know them), and I will strive to better myself, although I will never reach the level of skill seen here.
But enough self-negging, time for some pictures and projects!

These first pics are just taken with my phone or laptop-camera, so they're pretty bad. Once I get some more work done I'll try and borrow a better camera and do a setup for pictures. For now, bear with me.
My main project ATM are my GW Wyches-turned-Escher. Again, these are blurry pictures, but you all know the models I guess, so hopefully they are good enough to show the poses and such.
I've filed down some of the spikes, and changed some leg combinations to not have them all running.

So there are five running, three standing (one not shown, as she has no base yet), one kneeling and one squatting. The flamer is a IG flamer, and the only glued-on weapon. The rest of the weapons will be interchangable, as all the arms are magnetized. Example: 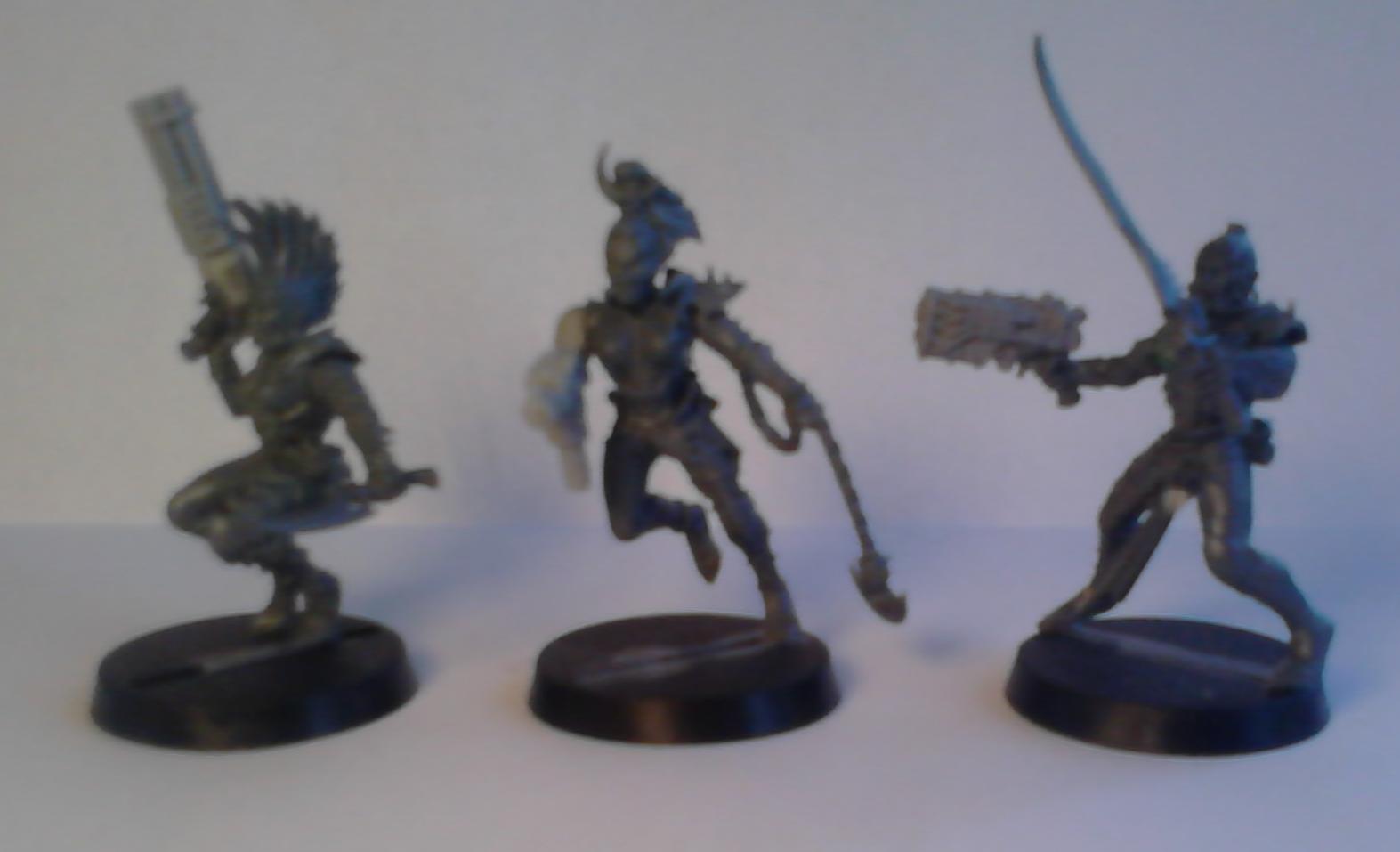 I've got more weapons to do, as well as basing for them all, but hopefully I'll get some paint on them soon(TM)...

I've also got some Van Saar, who've been stripped numerous times and are currently in some kind of painting-limbo. No pics yet.
My other gang is a Renegade, where most are also stripped ATM. I do have a few pics of painted ones, but these are some of the first models I ever painted 15+ years ago, so be gentle: 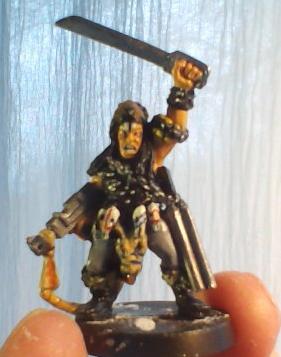 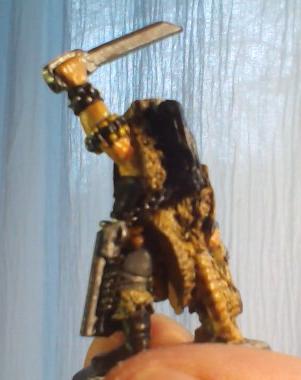 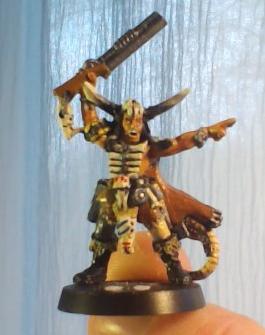 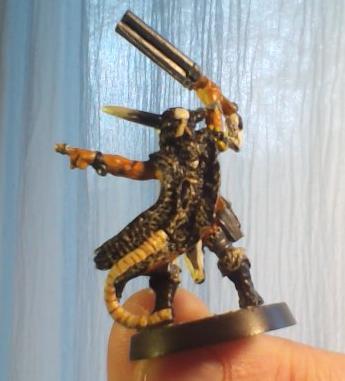 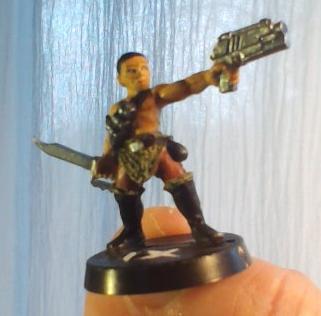 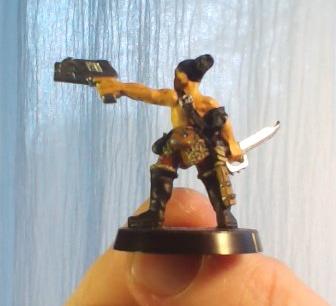 I also try and get some terrain done, but so far I've done two shipping containers, and they are at my friends house, where we play.

Summing up projects:
Escher - modelling and painting.
Ratskins - painting and maybe a few conversions.
Van Saar - painting.
Terrain, mostly scatter but might try and swing up to bigger pieces.
In the future I also might convert some Protectorate of Menoth infantry I have lying around into a Cawdor gang.

That'll be first post, I will try and get some work done, but hobbytime is very limited so don't hold your breath.
Reactions: ClockworkOrange, Nuttowntau, Draconic and 11 others
B

It's hard to tell from the photos, but did you green stuff the chests on those Escher? I assume that's to convert male to female.

I'm also impressed at magnetising those spindly little arms. It's easy enough with space marines, but those must have been tricky.

@Ben_S Yes, I've attempted to give the male models a little bosom with greenstuff. Time (and a better camera) will show how succesful I've been... Again, I apologise for the bad pictures.

I got some 2mm magnets, and decided to do the arms as wrists/hands/weapons would be impossible on those spindly models. The shoulder is just big enough to hold a 2mm x 1mm magnet, if you are careful. But it is rather fiddly, I admit.
Reactions: ThreeDice and Ben_S

So I had a little detour from my Escher (what, already? Yes already, alright!!), and made this miniature for my rival and regular/only opponent. Because I felt like it, and wanted to try and make an autoslugger, which isn't on Eschers' HWL.
Without further ado, Redemptionist Deacon with Autoslugger: 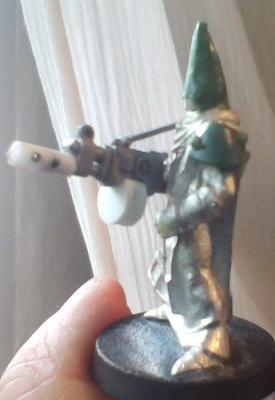 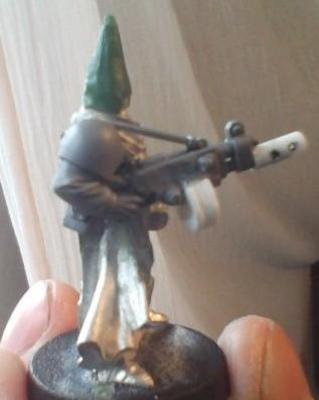 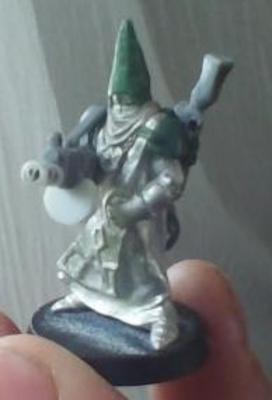 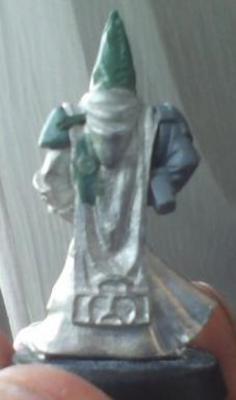 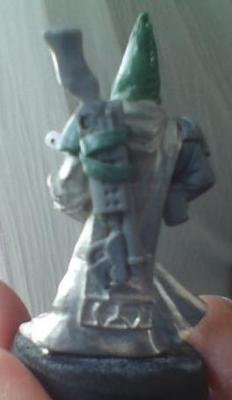 And because I went to see my friend yesterday, and wanted to give him the model, I painted it up while the kid was taking a nap. So not much finesse, just slapped some paint on him in quick fashion: 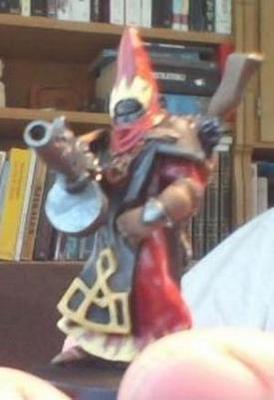 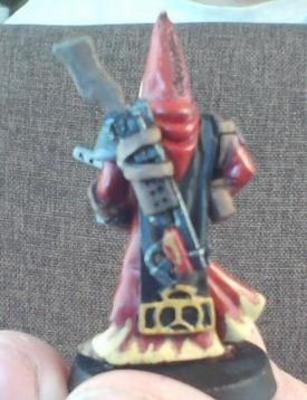 I guess I should promise cookies to anyone guessing which parts went into this, even though there are clues in other posts as to what minis I have available.
That's it for now.

Edit: I apologize for the blurry pictures, again... But then at least there is some challenge in guessing the parts for the conversion!
Last edited: May 9, 2017
Reactions: Nuttowntau, Domino, spafe and 9 others

Great model and a convincing go at an auto slugger!

It's a cadian flamer, apart from that you got me.
Reactions: MedMos

That deacon looks great - a lot like one of the John Blanche pieces from the ORB in fact.

What's the base model?

Thanks, guys! I'm pretty happy with how it turned out, and very happy you like it.

@Fold is of course correct that the base for the 'slugger is a cadian flamer. The base model is a Temple Flameguard from Privateer Press (the guy on the left sans shield and spear) with greenstuffed pointy hat. 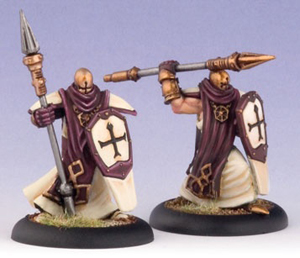 The shotgun is a goliath shotgun from the old plastics in the box set, cut down to one barrel to make it less bulky as I wanted to fit the exterminator on it, which is made from the filed down remains of the flamer nozzle. The rest is bits and pieces of scrap. A bit of plastic tube from a cotton swab (is that the right name?) for the muzzle, a bit of hard plastic for the drum mag, and more greenstuff for straps and such.

I have more Temple Flameguard that I should like to convert into a Cawdor gang, but I should really stick to the Escher girls for now...
Reactions: Domino, CaptainDangerous, hreikin and 3 others

As I don't want to anger @The Duke (), here is a little update on my progress. Known as

So as I felt inspired by Yakday I've tried to do a little work on my Wyches-turned-Escher lately. Five minutes here and ten minutes there doesn't get a whole lot done, but progress none the less, and I hope to keep the "momentum" going for a while.

The gang ready for primer: 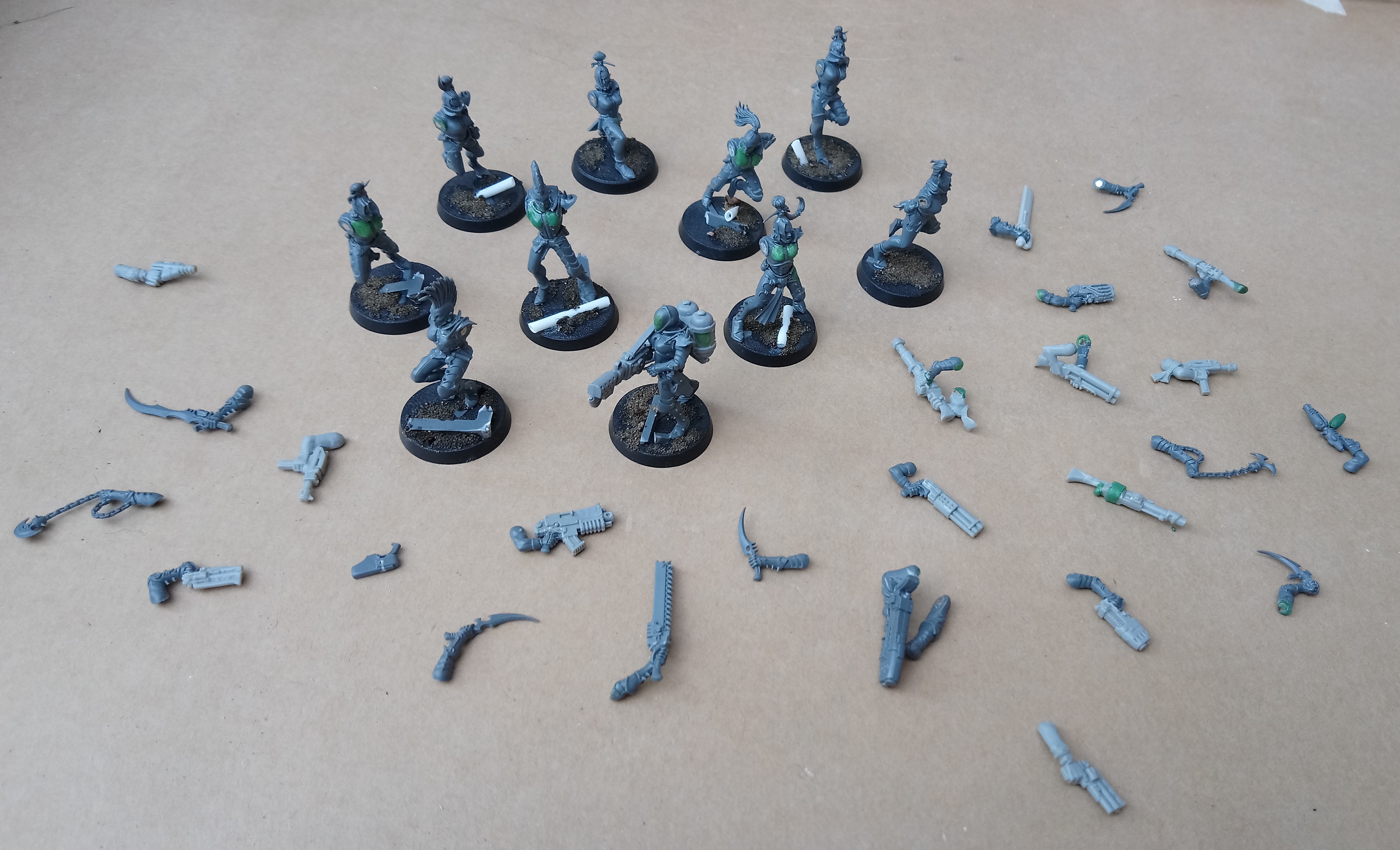 I've got a bunch of weapon options and all the arms magnetized, and found I will never be satisfied untill I have all possible combinations for all models. So I've called it quits on the weapons, with exception of a Heavy Plasma gun and Heavy Stubber that is yet to be built.

Models after primer, and hopefully in a better quality than usual (got a new phone, has a better camera).

Tried to put a filter on, for better detail, hope it helps. Once they get some colors it should be easier to tell what's what.

And a little teaser for coming posts, a WIP with a few basic colors splashed on there. 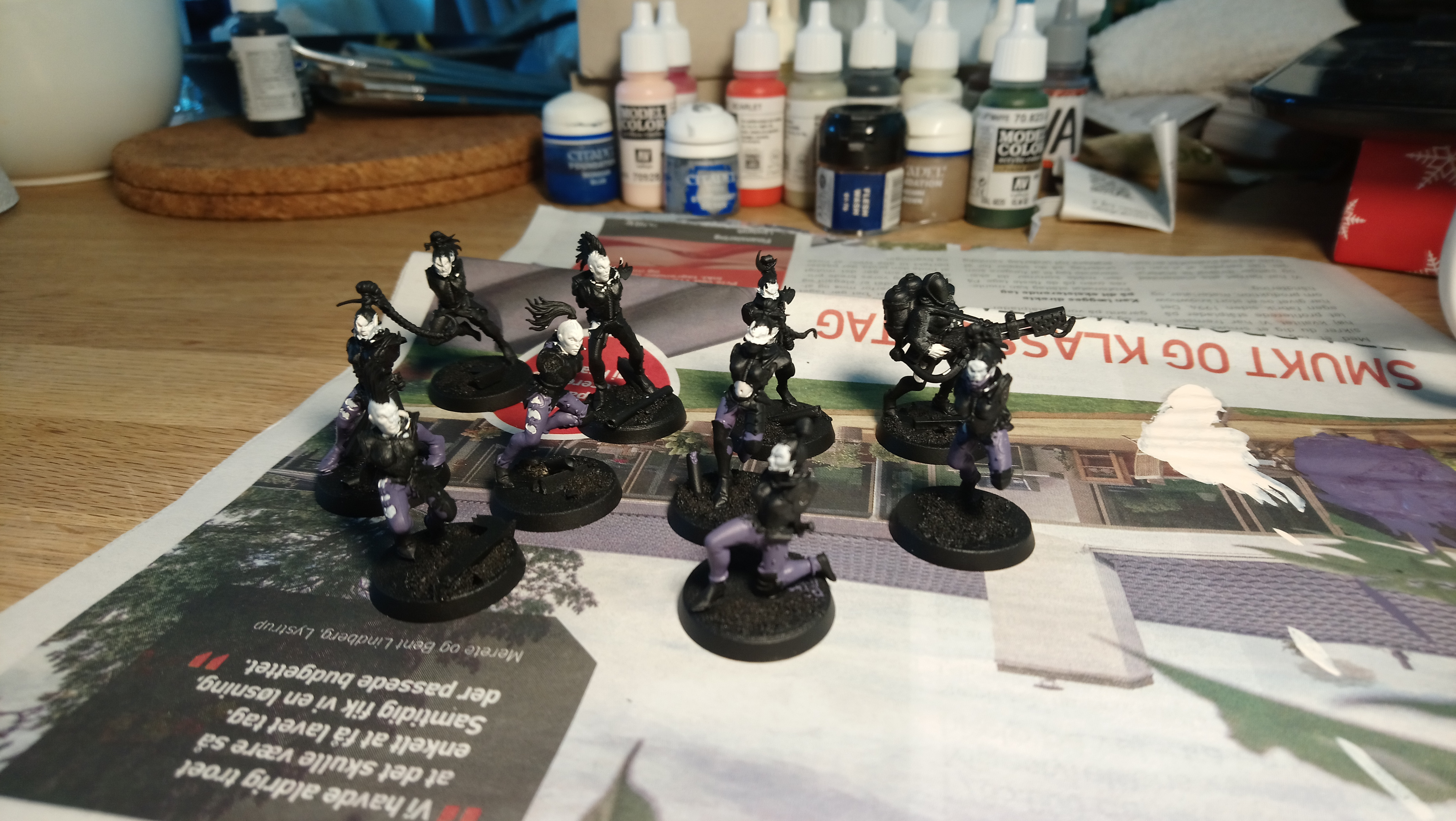 Reactions: Domino, spafe, Stoof and 8 others
B

I'm very impressed that you managed to magnetise those spindly little arms.

Some of those weapons do look huge though, even by GW's heroic standards.
Reactions: MedMos

Ben_S said:
Some of those weapons do look huge though, even by GW's heroic standards.
Click to expand...

Yes, plasma pistols among others look very big... I decided to go with it, and never magnetize to this degree again! A few models with a few options should be plenty. Big dreams don't always come through like you want them to. Live and learn.
Reactions: spafe and Ben_S

I think the magnetization was well worth it - great job.

The only weapons that look too big to me are the chaos marine plasma pistol (or is it from the Khorne berserkers?) and the boltgun.

I just saw the new Primaris Reivers kit, and I thought that their bolt pistols could make convincing boltguns on human sized models - particularly with a standard boltgun magazine instead of the very small one that they have.
Reactions: spafe, ThreeDice and MedMos

I wholeheartedly approve of this amount of magnetisation! Legion space marines have a much smaller, human scaled plasma pistol should you wish to seek one out.

Thanks a bunch, guys! I am sure I will appreciate the magnets once I get to play a campaign.

@sump dweller I don't know where the plasma pistols are from, got them from a guy I've played some fantasy against, he's got a bunch of 40k armies and one hell of a bitz box! Same with boltgun. Most of the other weapons are leftovers from the original box set, and a few from the Cadian command set. What I could scrounge up (bought the Cadian command though), as I'm on a tight budget.

@Fold I appreciate the offer, but unless you are close to Denmark it might not be worth the postage.

From The LEGO Movie. KRazy GLue.
Reactions: spafe and MedMos

Nice work on the Eschers! I too am impressed with your dedication to magnetizing them all so thoroughly, skinny limbs like those are a pain to do. Looking forward to seeing some paint on them

Orlock ones from the original plastics I presume?

Indeed they are, @Fold! Thanks, @maxwellrpower. I'm ambivalent about painting them, all those tiny arms... Maybe I should paint them on the models and take them off for drying. Or make a little holding mannequin of sorts...​
Reactions: maxwellrpower

I've been doing some magnetised arms on my Gorkamorka mobs and so far I've been giving the inside surfaces a base coat and a couple of coats of gloss varnish first for protection, then painting the whole mini with the arms stuck on. That seems to be the easiest way to hold them, though since they've got magnets in you could just as easily stick them to anything metal