Yakcomp #34 kicked off, and I plan to do a Cawdor Juve sneaking up on a Scaly, to try and stab 'im! Mad Robots Mega Challenge is also into round 2, so updates will shift between the two as progress is made.

First off, I found some bits for the comp. 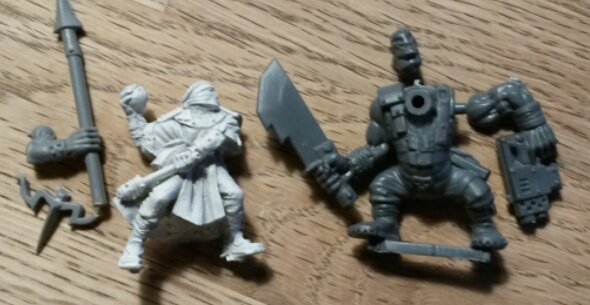 The beginnings of a Cawdor Juve and a Scaly...
I still need some weapons, I think I want a stubgun and knife on the juve. And probably a scratchbuilt speargun on the Scaly. Also a scenic base, so the Juve has some cover whilst sneaking! More to come soon(later).
Reactions: Nuttowntau, Biggle_Bear, trollmeat and 3 others

Last week saw very little progress, but I managed to get most of my support for the Witch's warband glued and put on the right bases. I still need to put gravel and cobble stones on there, and for some reason the last thief is impervious to super glue... But other than that, paint shall soon be applied. Quick wip photo of the unclear variety coming up.

Thief, archer, tracker, war hound, thug. Another thief and basing to be done before painting.
Reactions: Crazy Ivan, trollmeat, Ben_S and 2 others

I guess I'm a Monday-update kind of person now... It's been a week, and I've managed a little progress on the Frostgrave soldiers. A lot of my time this week has been spent on a short series of online lessons on how to get started or get moving with writing a book. I'll update as and when that becomes relevant. But here is my humble hobby progress, primed models, apart from the glue-resistant thief who is only now ready for priming (once the last bit of glue dries). For you Frostgrave aficionados they are, from left to right: archer, thief, tracker, war hound, thief and thug.

I'll see about getting them up to at least the three colours over the next evenings.
Reactions: trollmeat, RonBSM and Ben_S

First off, woohoo! I've got a game planned! Actually two dates, one in late July and one in early August. On these days, some Necromunda (NCE) will be played at my friends house, and I can't wait. Last time we got together for some games was April 2019.

Next item on the list, the Frostgrave warband. As I mentioned in the MRMC 2020 thread, it is sadly on hold. I soured on the project, and it was beginning to feel like a chore. I'll still do it, once I clear out some other projects. And I'd still love to do some Frostgrave, either single player or with the kids, but right now it is Necromunda that's being played so my motivation for that is bigger.

And finally, a little progress on my yakcomp project. My assassin just needs a base and he'll be ready for paint. I also put a head on the victim, but I'll show him when a little more is done. The assassin has had a hand swap and a weapon swap, to look like this. 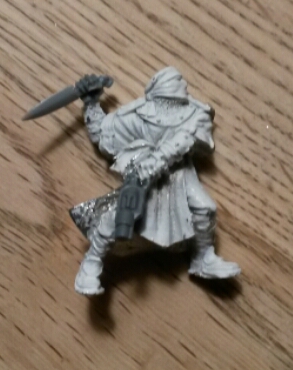 Ready for stabbin'! It was a little fiddly removing the club, but pretty happy with this simple conversion.

Also for the comp, I was having a hard time deciding on the terrain/backdrop/scenic base, because I wanted something I could use in games later. Then it hit me, I've got an untouched pack of Tabletop Scenics 'Iron Labyrinth - Death Quadrant Complex'. I'll do a wall section and a set of stairs the assassin can sneak out from under, sorted!

Lot of words. Will try to get more models and pictures done for next update.
Reactions: Loriel, Scavvierising, Chaos Moomin and 8 others

Nice! I particularly like how he's holding the pistol.
Reactions: trollmeat and MedMos

Thanks, @Howie! The pistol placement was very much determined by the position of the hand, but it kinda fits! "Yeah, I've got a gun, but I'm gonna stab this sucka".
Reactions: CaptainDangerous, RonBSM, trollmeat and 1 other person

A little progress on the comp, not much but I wanted to show the scaly starting to take form. Here he is, with the beginnings of a speargun and some extra ammo. 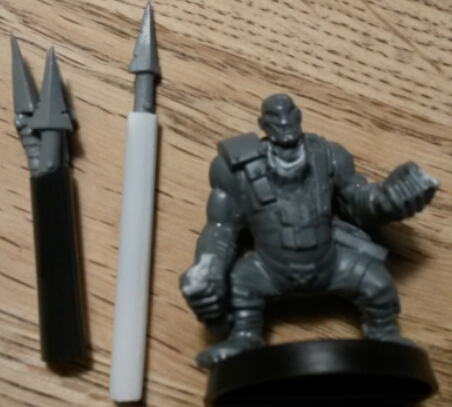 He will need some greenstuff to smooth over the rough joints, but coming along nicely so far, I think.
Reactions: Draconic, SuboptimusPrime, trollmeat and 3 others

I've progressed on the comp, here are quick snapshots of a "victim". 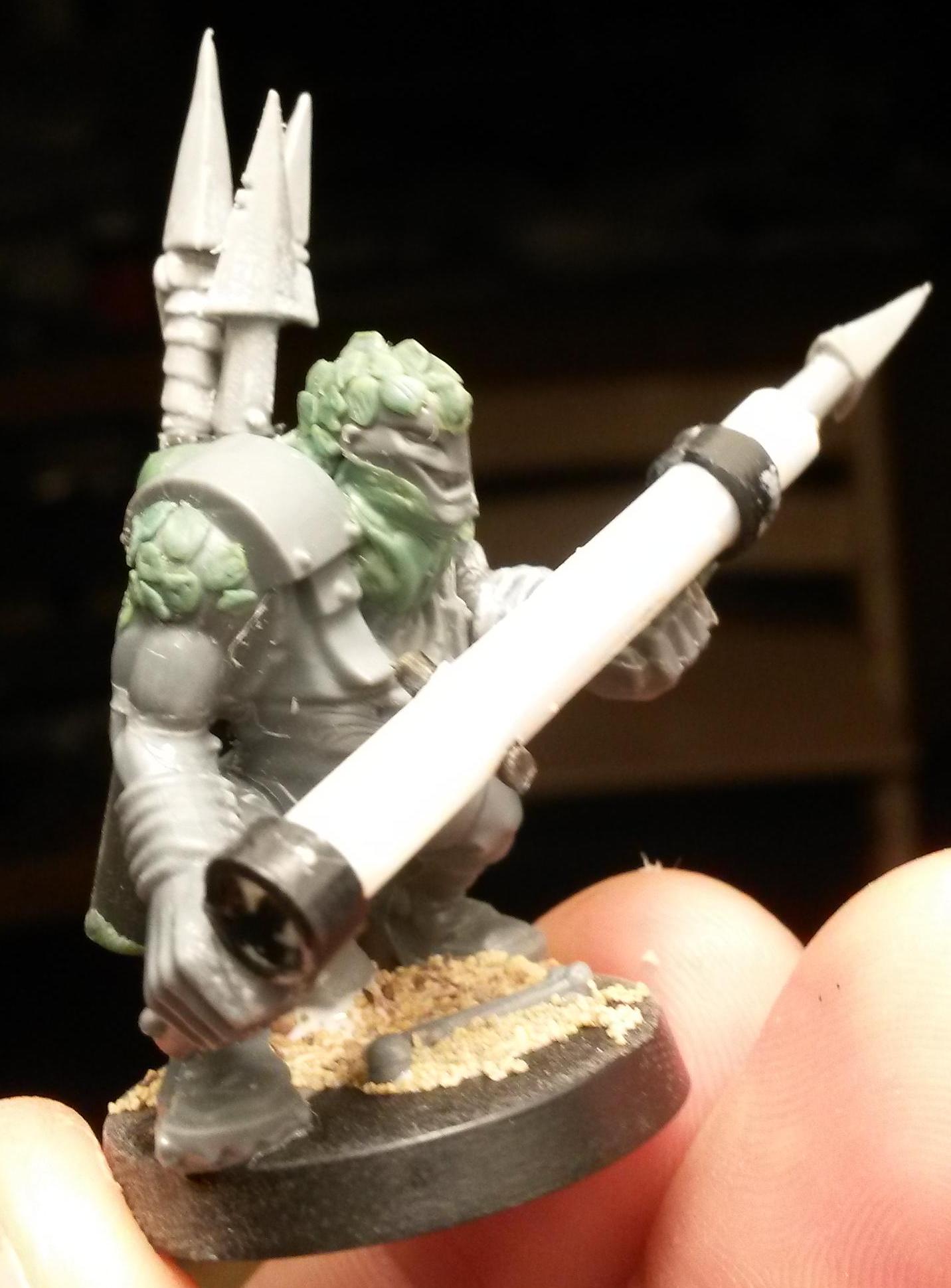 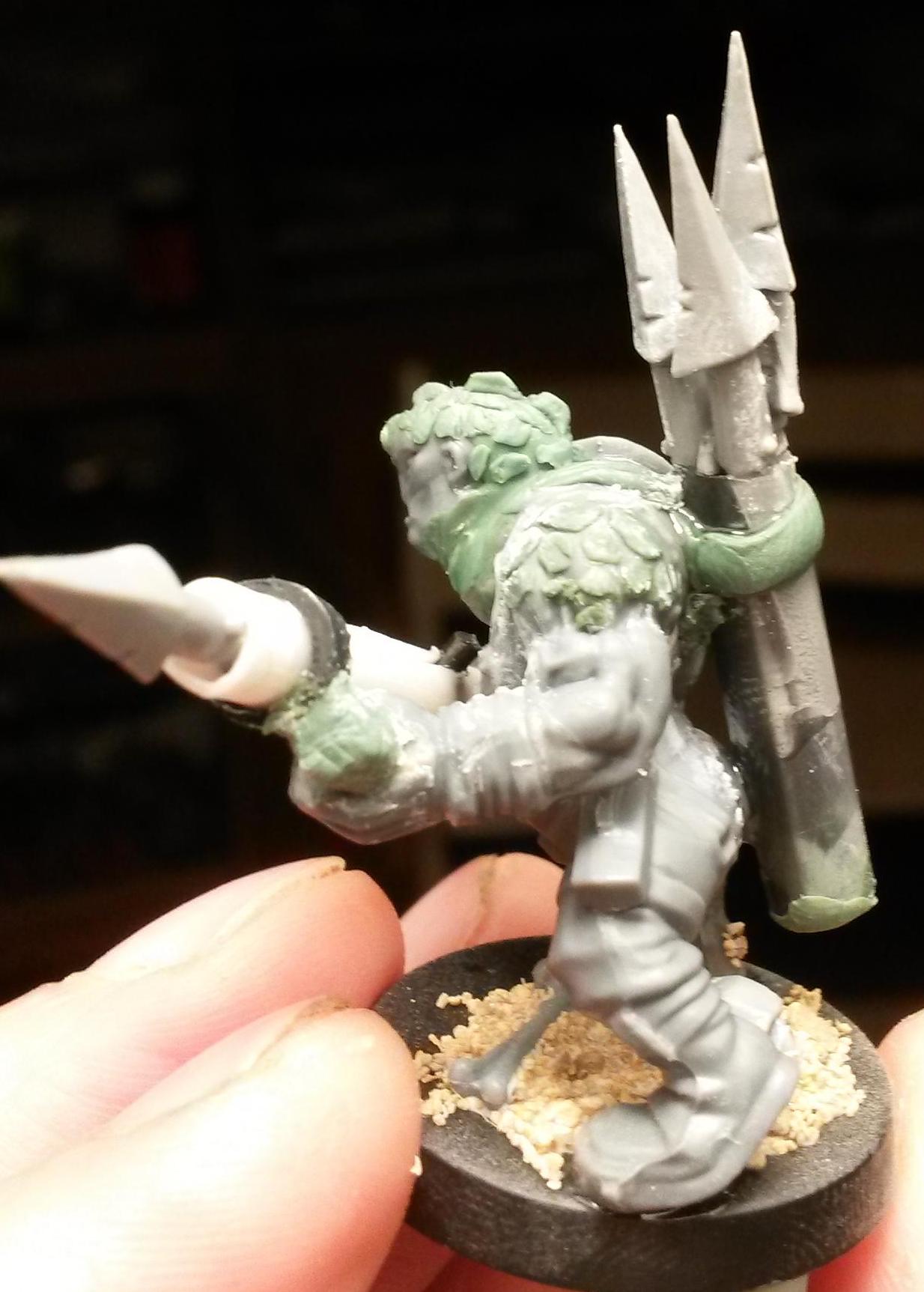 I had my doubts on how everything would fit, but smashing it all together with greenstuff and glue seemed to work alright.
C&C appreciated, but not much more time for building now.

Nice job on those scales. I wasn't sure about the head to begin with, but it fits now.
Reactions: trollmeat and MedMos

Ben_S said:
Nice job on those scales. I wasn't sure about the head to begin with, but it fits now.
Click to expand...

Thanks! I was pretty happy with them, though the pictures reveal the roughness. I had a bit of a battle with them, as they kept sticking to the tools or fingers. But I hope they paint up nicely.
Reactions: trollmeat
B

You probably want a bit of rough texture. They remind me of the Saurus from the 5th edition WFB set.
Reactions: trollmeat and MedMos

Every little step counts, I assume...
WIP of what I managed tonight, the littlest Yakling is a right pain to get to sleep these days. 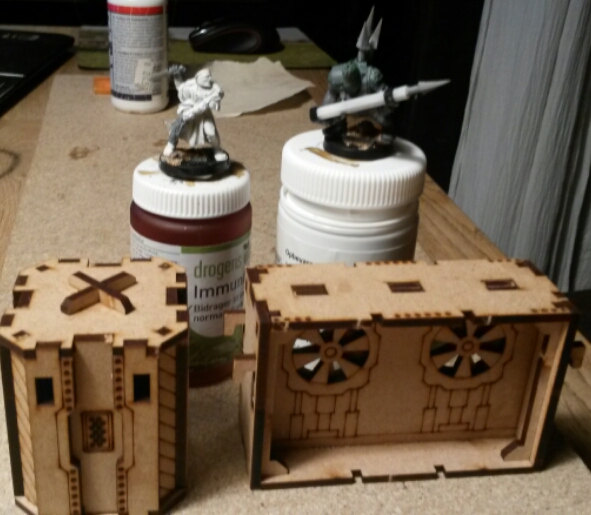 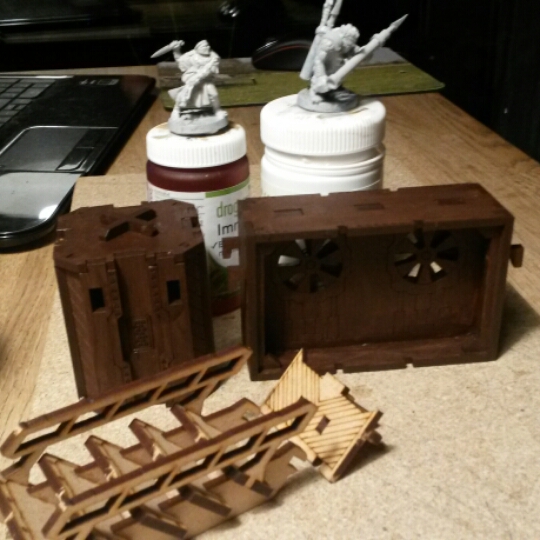 Another evening, another coat of paint. Hopefully tomorrow will show massive improvement, as I apply some colour to the sort of "zenithal undercoat" I got done today. 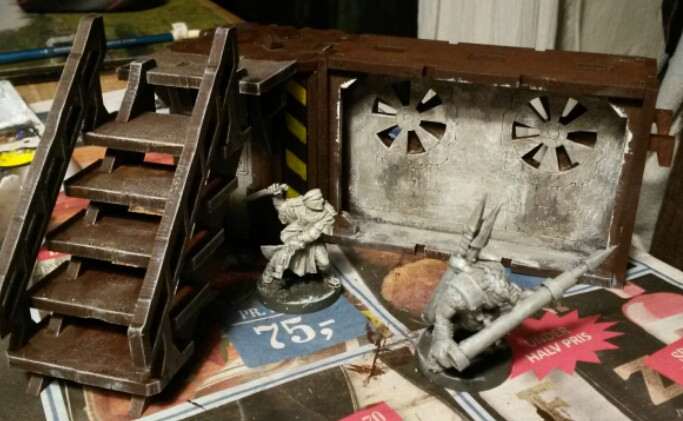 With the deadline looming, this is the final wip... Tomorrow will show how much more detail will be painted. 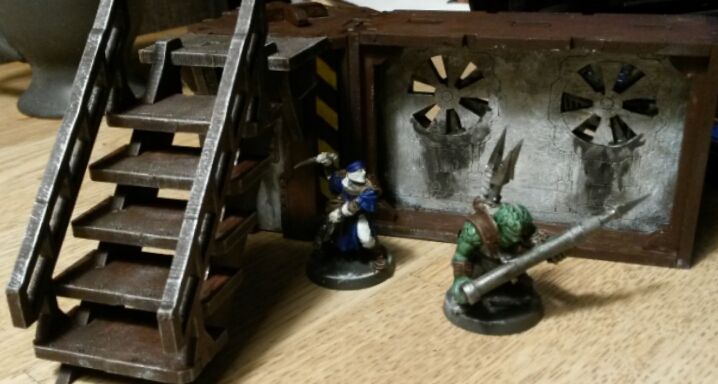 Since finishing my entry for yakcomp #34, I've been trying to get the rest of the 'Death Quadrant Complex' built. I hope to get as much of it done as possible before gameday at the end of this month. Here is the whole thing, in various stages of completion. 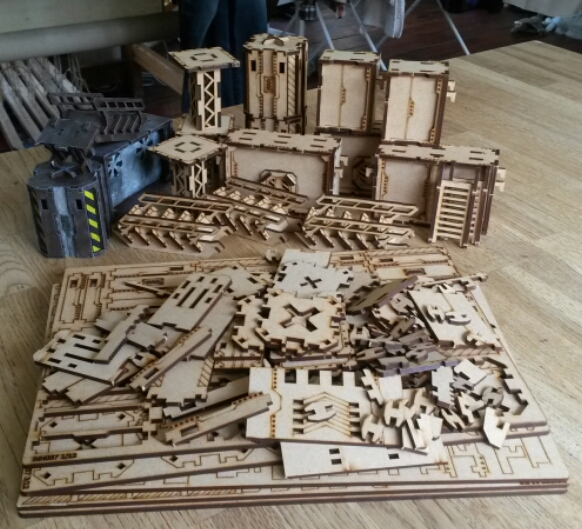 I'd say it's about halfway built by now, but there's a lot of painting to do! I'm not going crazy with details or weathering, but it'll take some time to get through it, I might have to step up the pace. Although with three kids home for summer and Mrs. Mos working most days, that might not be doable. We'll see...
Reactions: ClockworkOrange, Ben_S, Draconic and 4 others

Caffeine... and who needs sleep!

I've had more coffee in my 40's (I'm 43 now) than probably all my life before that... I need sleep! One of the disadvantages of having kids late, I guess.
But thanks, @Draconic. I'll take that vote of confidence and run with it!
Reactions: Draconic

Despite the best efforts of yaklings, I've managed to assemble the rest of the set!

I am not in the habit of making stuff strictly by the instructions, but this is my first set of mdf terrain, and a rather specific one at that, so I just put it together like in the picture. It's very modular still, so I'm sure we'll get a lot of use out of it! 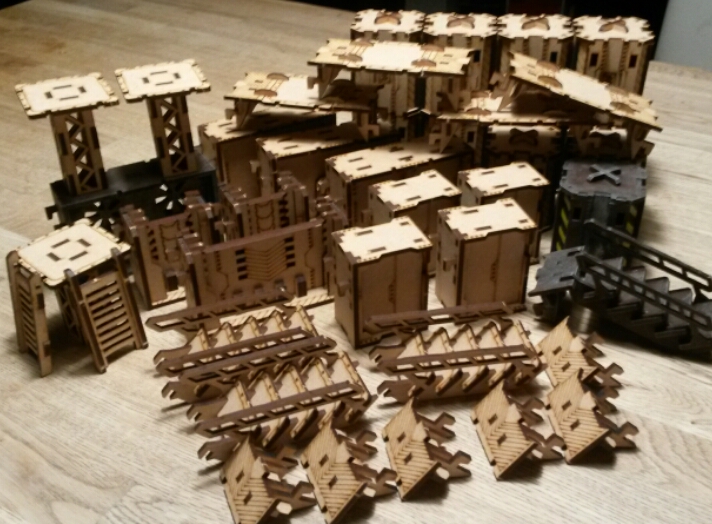 And of course, on top of that lot there are all the "hidden" bits! The extras and leftovers, with loads of lovely shapes, sure to come in handy at some point. 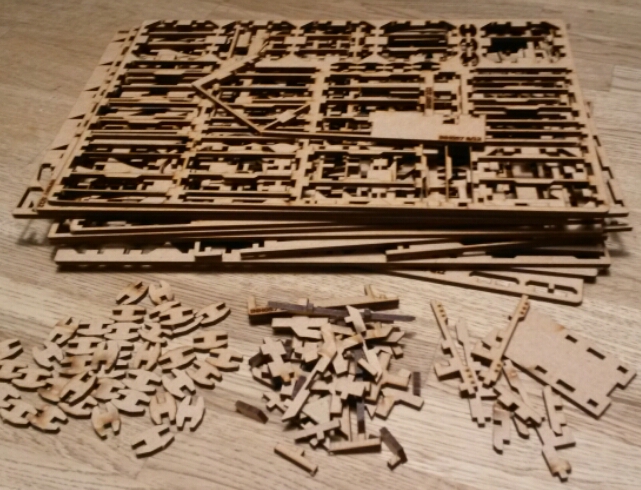 Now I just need to get some paint on them... But not tonight. Games will be played Wednesday of next week, so I will need to get going!
Reactions: ClockworkOrange, SuboptimusPrime, Draconic and 4 others

I did not manage to paint up any more of the terrain, we put up a tent in the field and spent the last few nights out there. Very cozy, but it cuts into my hobby-time. At least I finished assembling my Totem Warrior for tomorrows games. 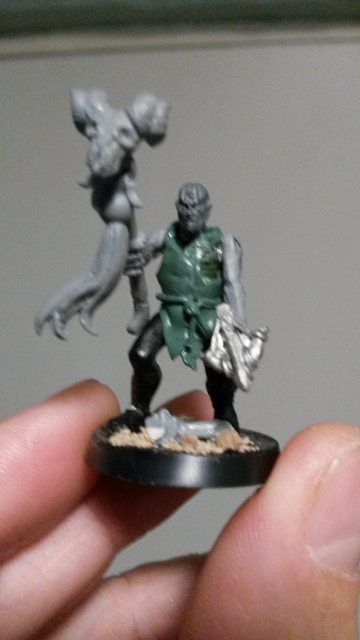 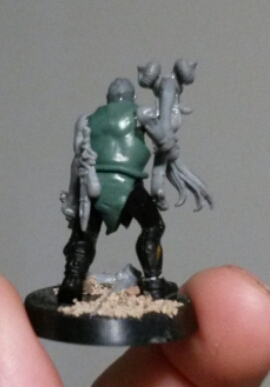 I've also put a coat of grey paint on him, as a primer. He'll have to eat bullets without a fancy paintjob, yet. I'll post again when I get some colour on him. Also, I've almost finished detailing the riser I made for the hazardous comp, was it around #30? Anyway, I'll get some pictures of the finished thing soon. So many projects to finish... Hope you like the Totem Warrior, he's not your standard buff-guy-without-a-shirt. I wanted something more worn and weary, for a lack of better words.

I've immediately jumped in on the next comp. Why finish all the other projects when a new one can be started...

The base material is here. 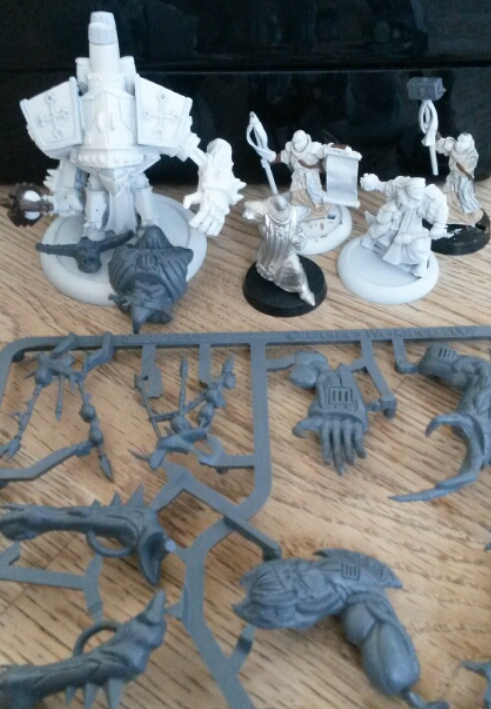 Full disclosure: I glued the hammer on the guy in the back before this comp started. I don't know if I'll even use him, but there it is.

The description of my project is in the comp thread, but I'll elaborate further here at a later time.
Reactions: Nuttowntau, CaptainDangerous, trollmeat and 1 other person
Show hidden low quality content
You must log in or register to reply here.

B
The Forgotten Cast