Very small update, I haven't been able to get a lot done, and some people are already done with their entries... Time has been very scarce, and I've considered dropping the bike and going for a sumpboat instead a number of times, in part because a bike is standard fare really, being done by others... However, I'm pretty sure I'll do a sump boat eventually, whereas this will probably never get done if I don't do it for this comp. And the image I have of this bike is pretty cool in my mind, so I'm sticking with it.
But after this comp, I've promised myself that any hobby time must go towards gaming pieces! So here's hoping the winner of this one accomodates my wishes.

Anyway, on to the building. As mentioned this is a small update, just to show a little progress. I've cut up some plastic, shaved off some bits and glued a skeleton together, so parts are getting closer to being ready for assembly, not very exciting... But today I lined out some of the pieces on paper, to give me an idea of fit and the size of the frame. 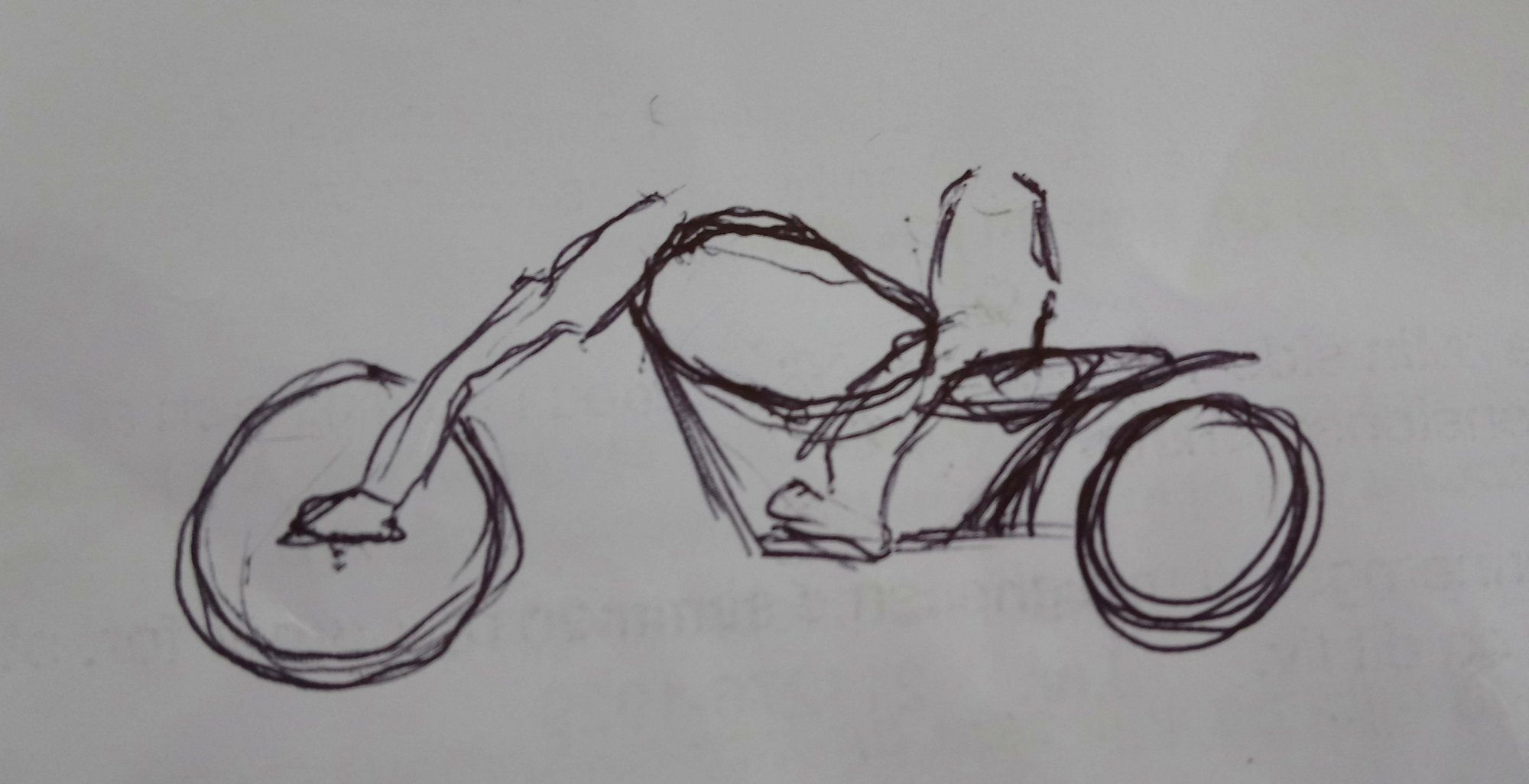 The gastank strikes me as being somewhat large, so I might shave it down a little...

I also started bending some wire, but forgot my clippers at home, so this is as far as I got. But I like it so far! 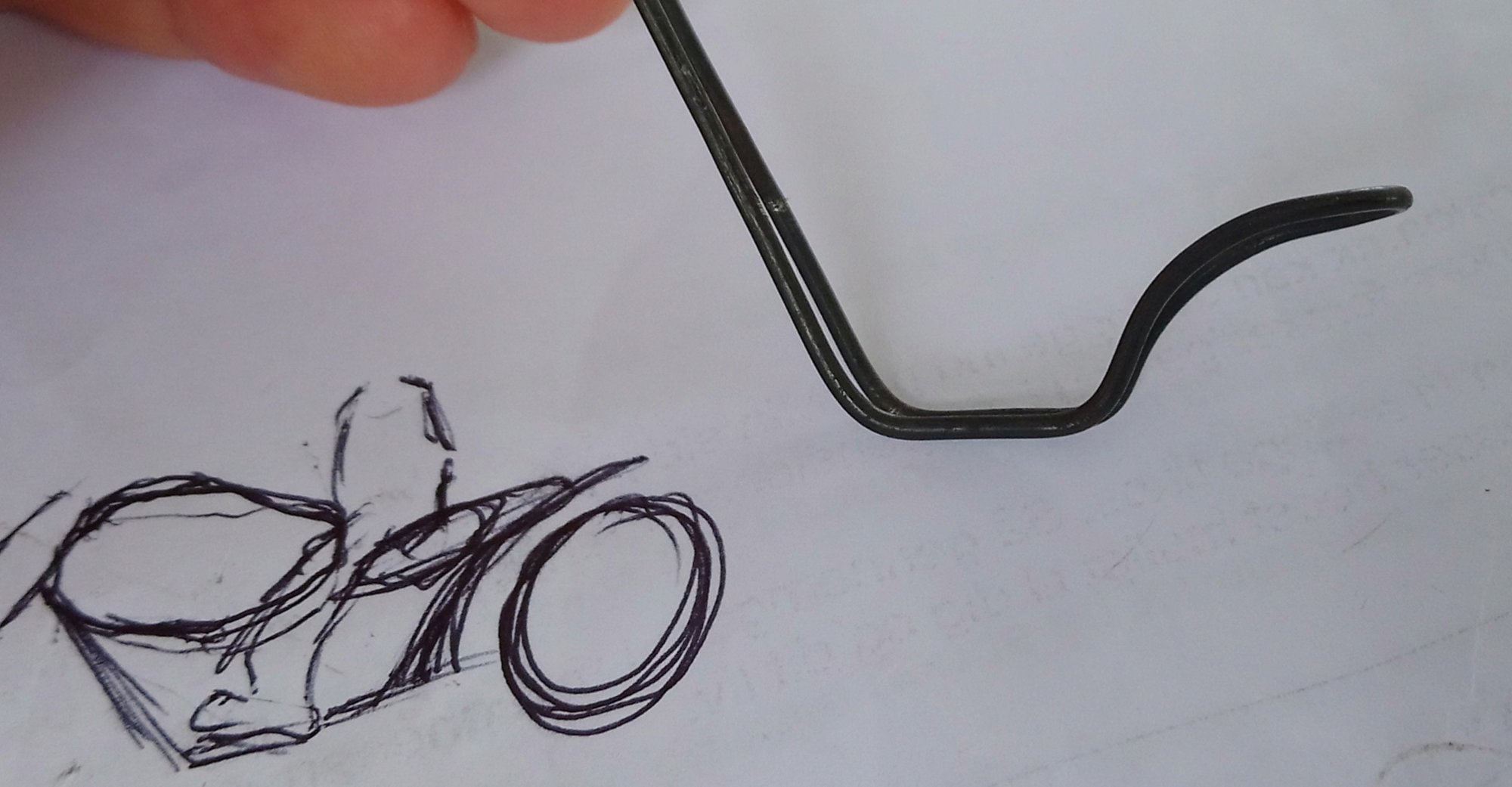 And a quick fitting of the key parts so far. 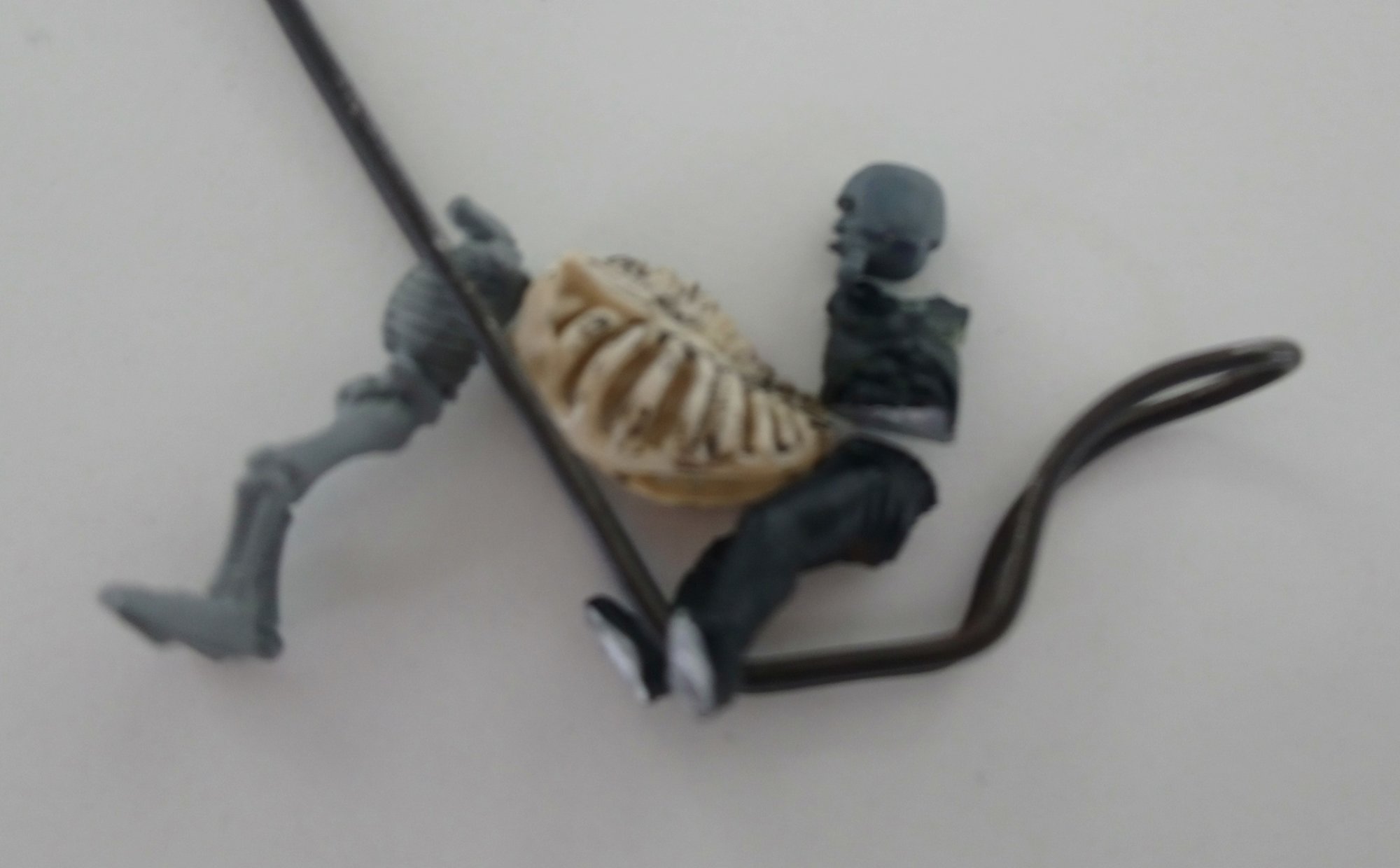 This is going to be fantastic, great concept

Is it going to have mounted weapons?

@maxwellrpower I don't think it will have mounted weapons, but he will have some scummer-appropriate weaponry.
And thanks, I hope I can do it justice!
Reactions: maxwellrpower

I'm afraid I am not familiar with the Discworld universe, @SirFrog... I hope I'm not in any copyright infringement/fan base alienation territory?

Dᴇᴀᴛʜ rides a motorcycle made of bones.
Which is very relevant to your work.
Reactions: MedMos

Ah, got it! My scummer won't be that guy, though I guess he'll smell a bit like it.

It is going to need a big pair of 'ape hangers' with the petrol tank being that big. It is going to look crazy - I am looking forward to seeing this develop!
Reactions: MedMos

@sump dweller Googled 'ape hangers', just to be sure... I could pretty much guess the meaning, but hadn't heard the term before.

A little update, things are moving very slow due to life happening. And apparently I'm building this thing like I'm working at OCC or something... Very fiddly.
Some pictures! 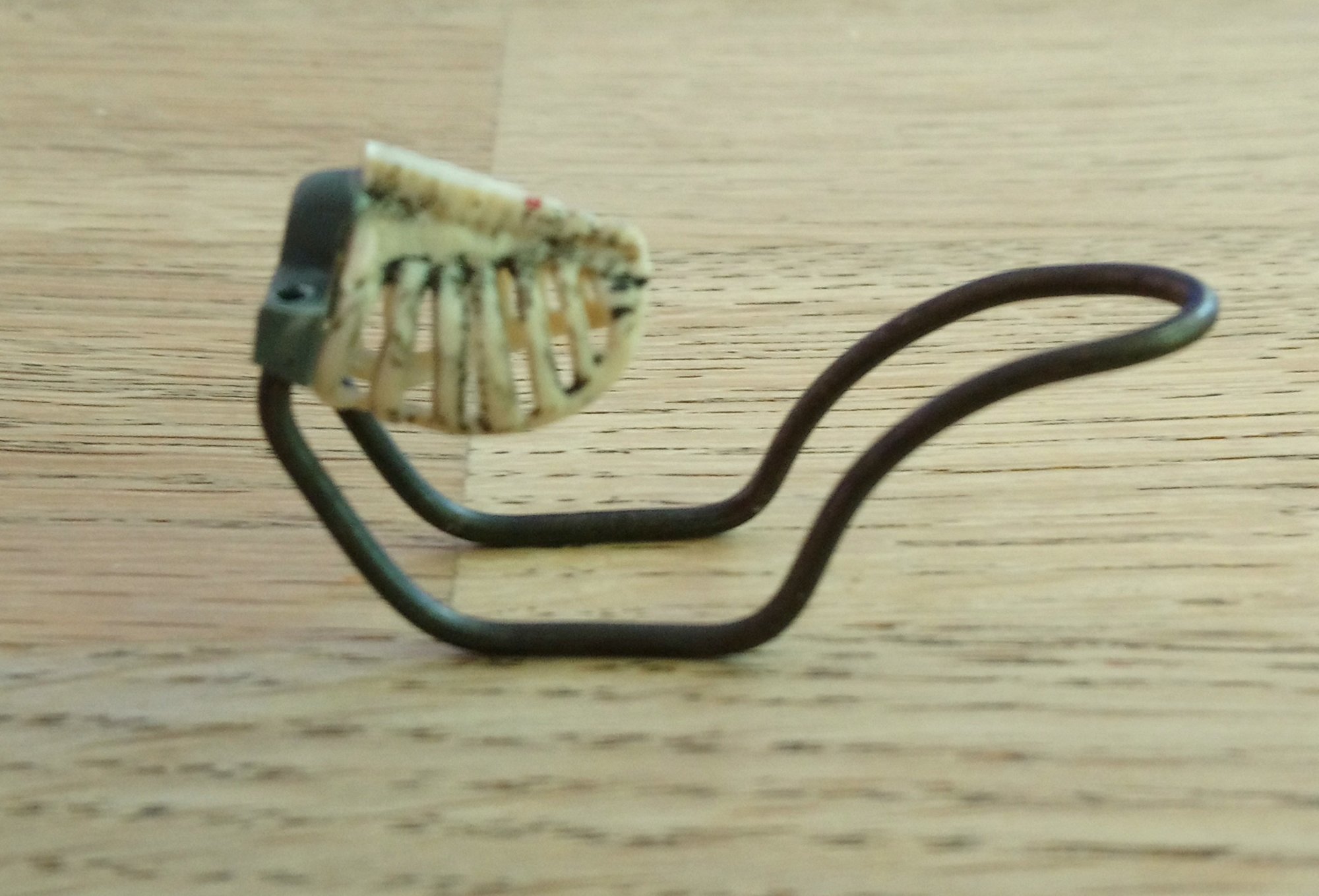 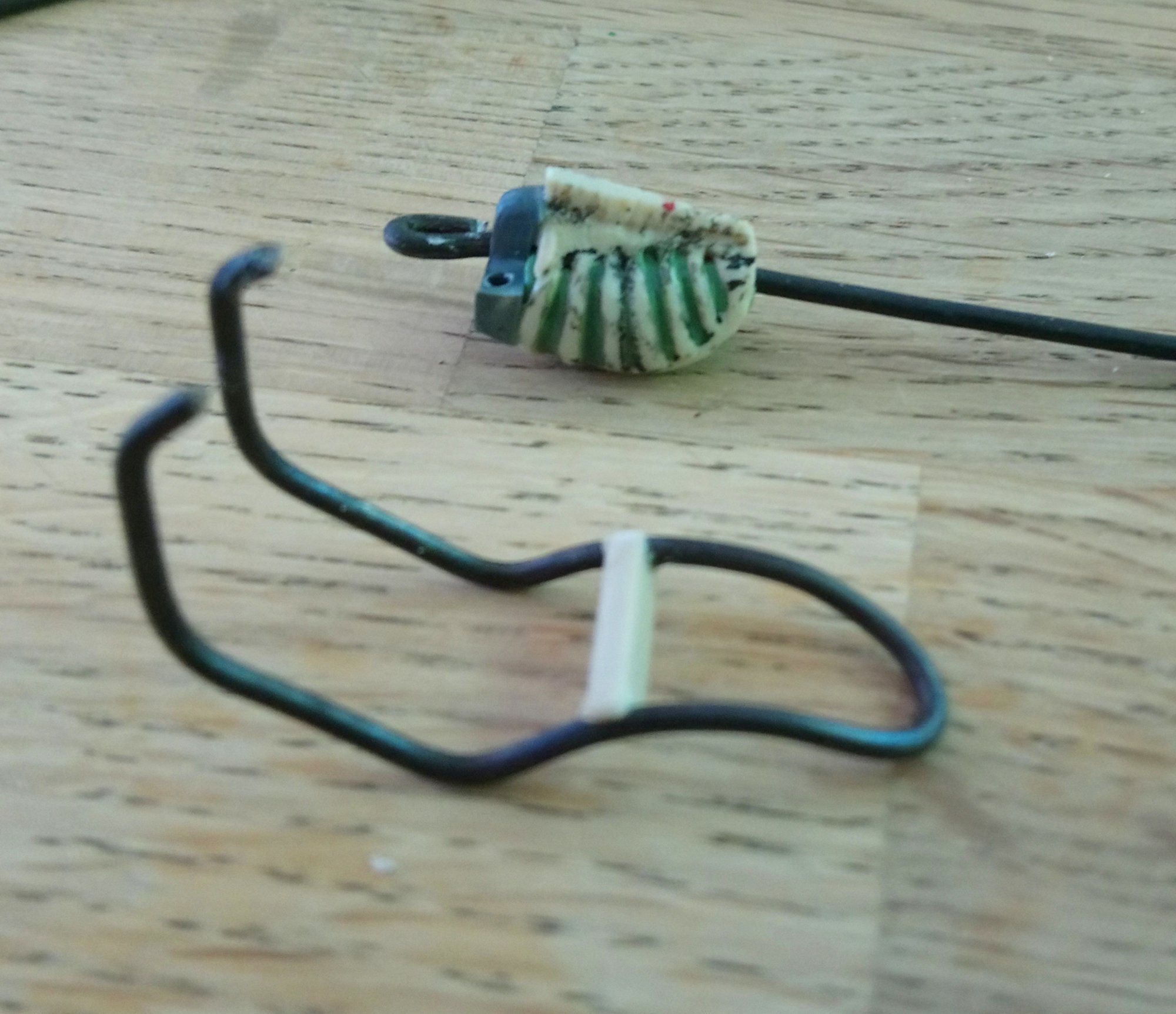 Dry fitting of some parts, and filling out the gas tank/rib cage with greenstuff is what I managed during nap time today. I shaved down the gas tank a bit, don't worry though, 'ape hangers' are still in the plan! And here is the progress so far, not much... But It'll have character! 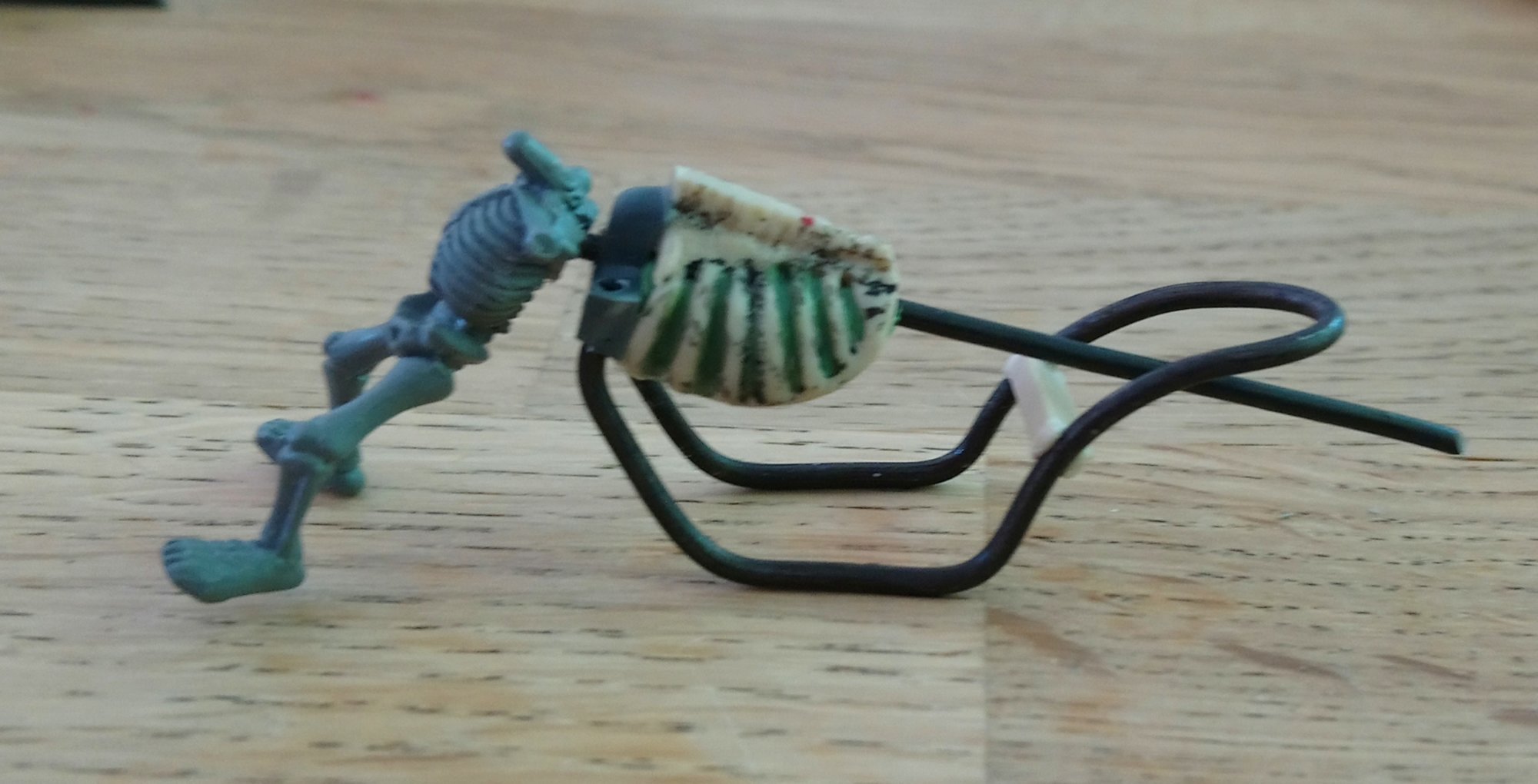 Another small step forward with comp 24. I need to get a move on!
I googled "plasma engine", apparently it's a real thing, so I made an engine that looked a bit like a mix between combustion and plasma, and plopped it in there. 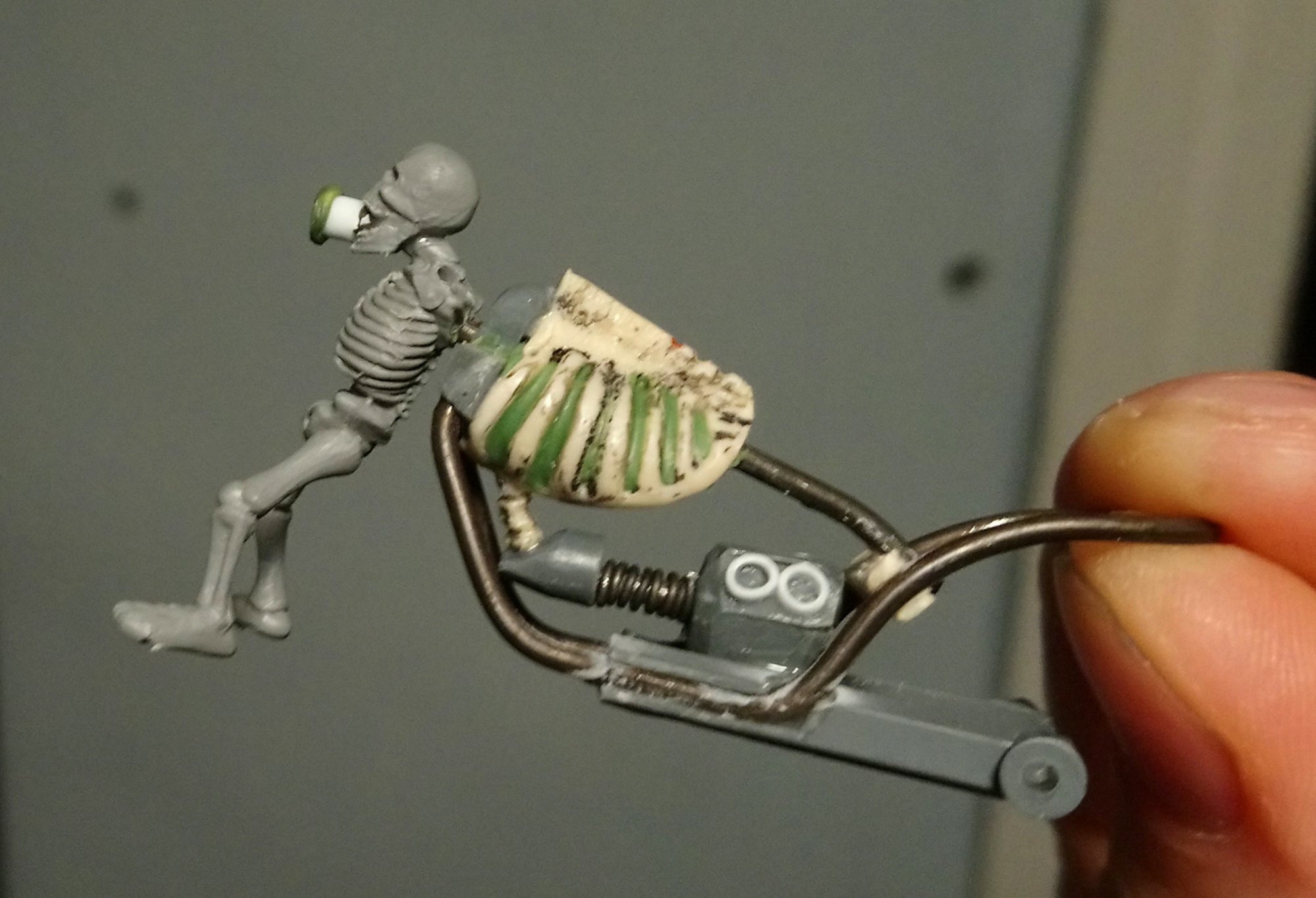 I also fitted a rear wheel that I greenstuffed some days ago. 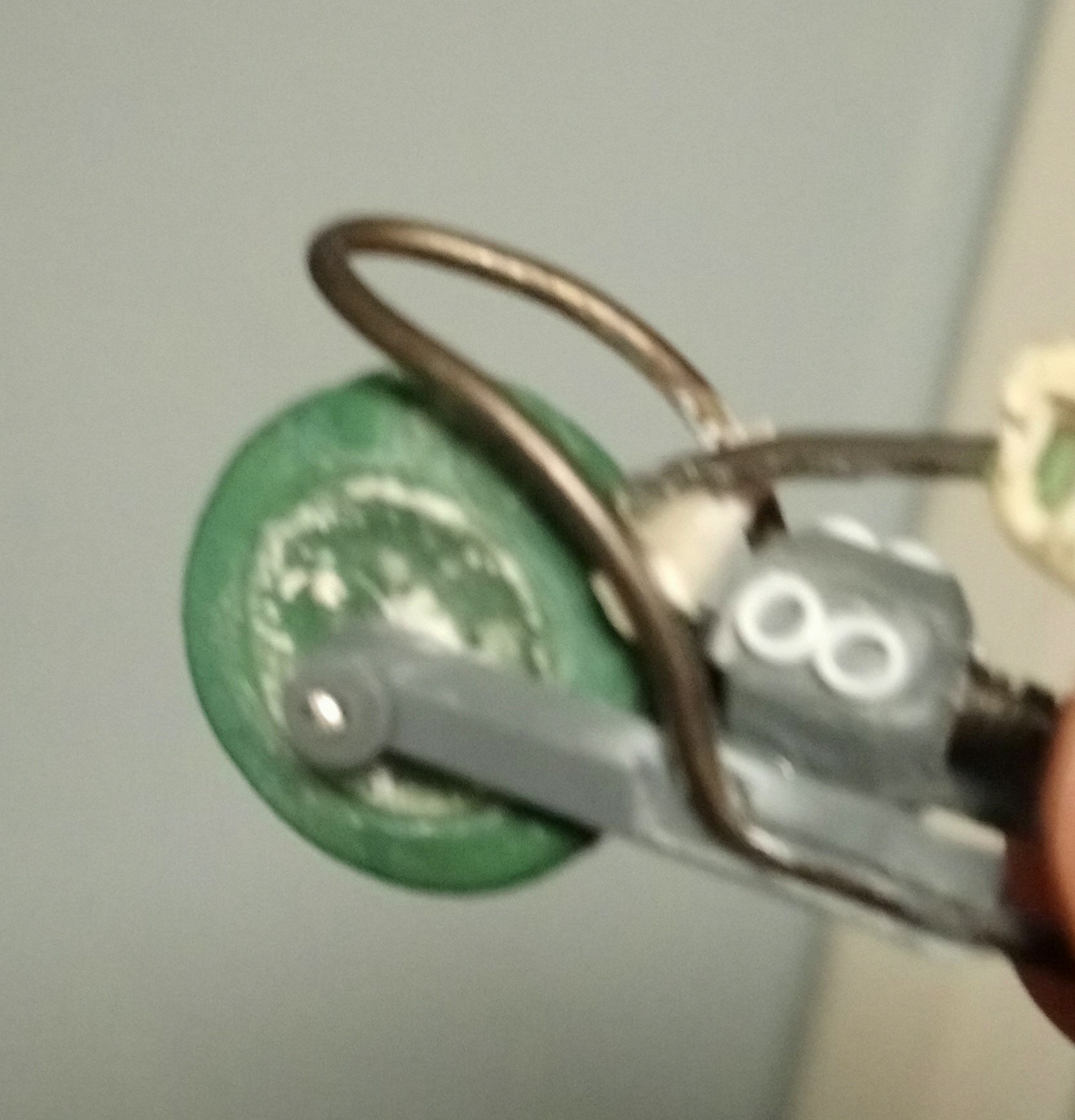 And then I greenstuffed a seat and called it a night to let everything dry up and set properly. 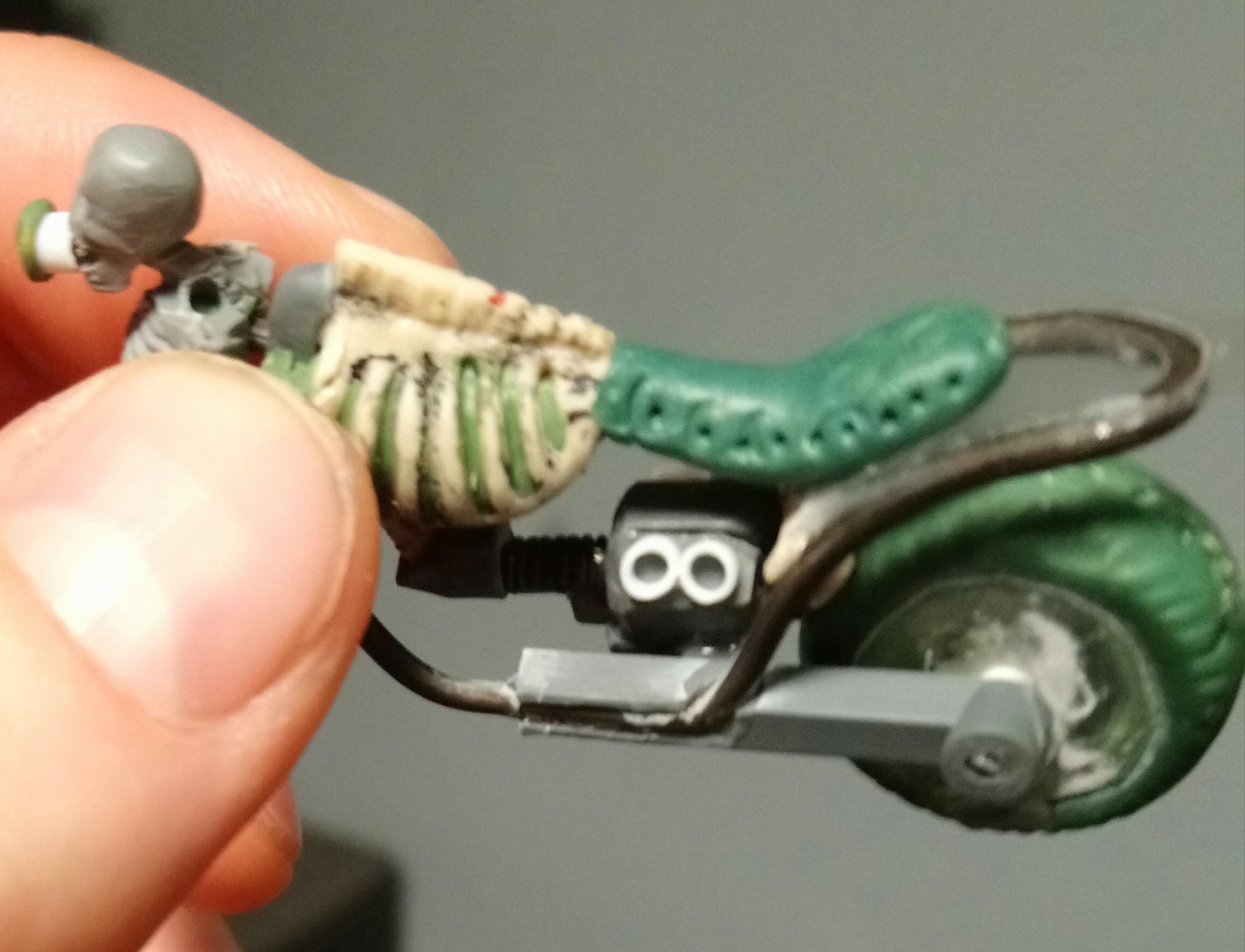 It looks looks like a mess, but I hope some paint will help...

Looks good to me - I am looking forward to seeing it finished, ape hangers and all!
Reactions: MedMos

This is awesome, can't wait to see the final result.
Reactions: MedMos

Thanks for the support, guys! I don't know what possessed me to build a bike with absolutely no bike-looking parts in my bits box... But hey ho, here we go, at least it won't look like any other bikes out there.
Reactions: sump dweller

Sorry for the lack of updates, I've literally worked on this in small chunks whenever I had time, so never took any pictures. But now it is ready for primer in the morning, and then whatever paint I manage to slap on it tomorrow before I upload to the comp thread.
I'll put up a few pictures, followed by a quick run down of what was added. 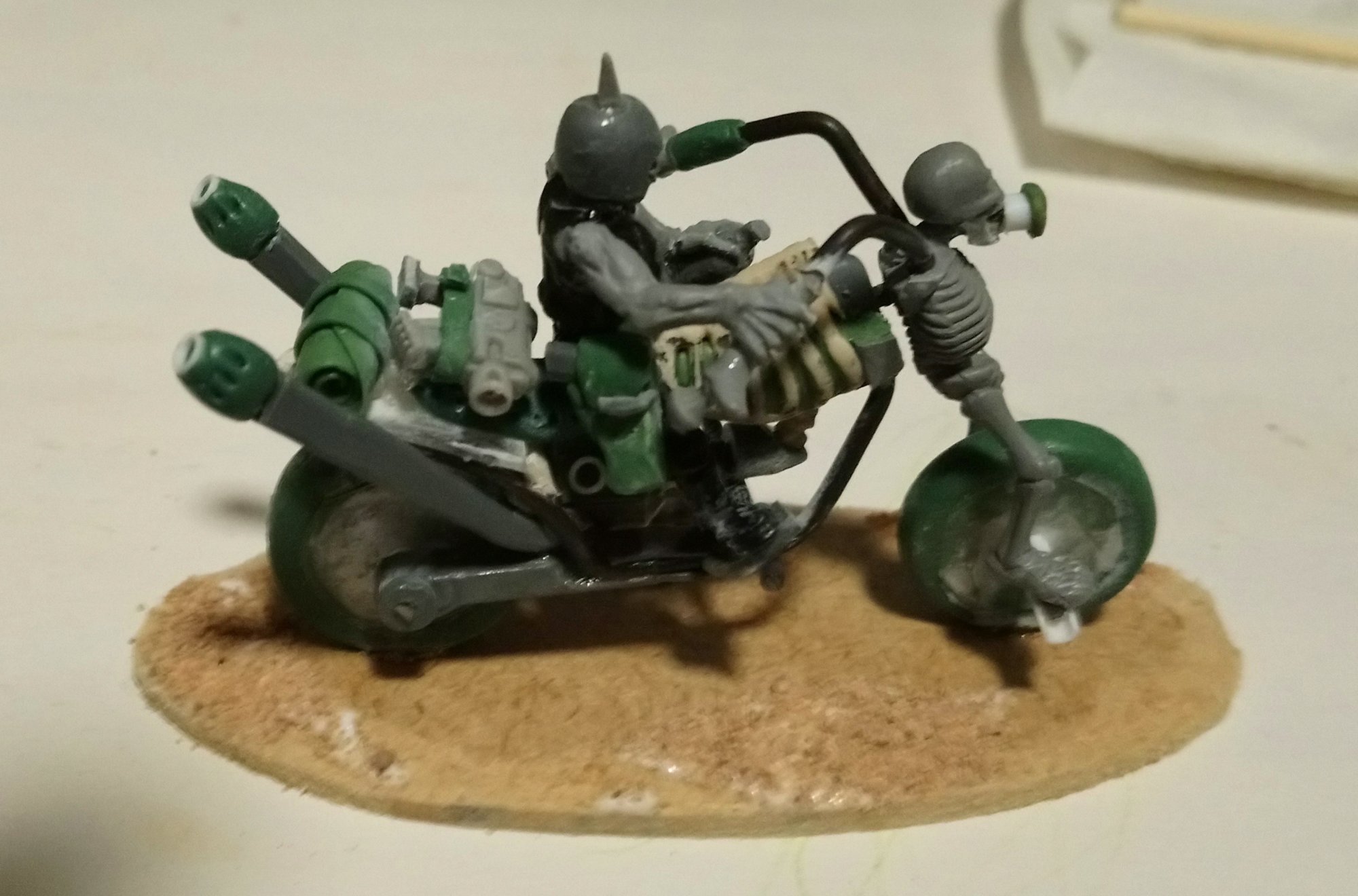 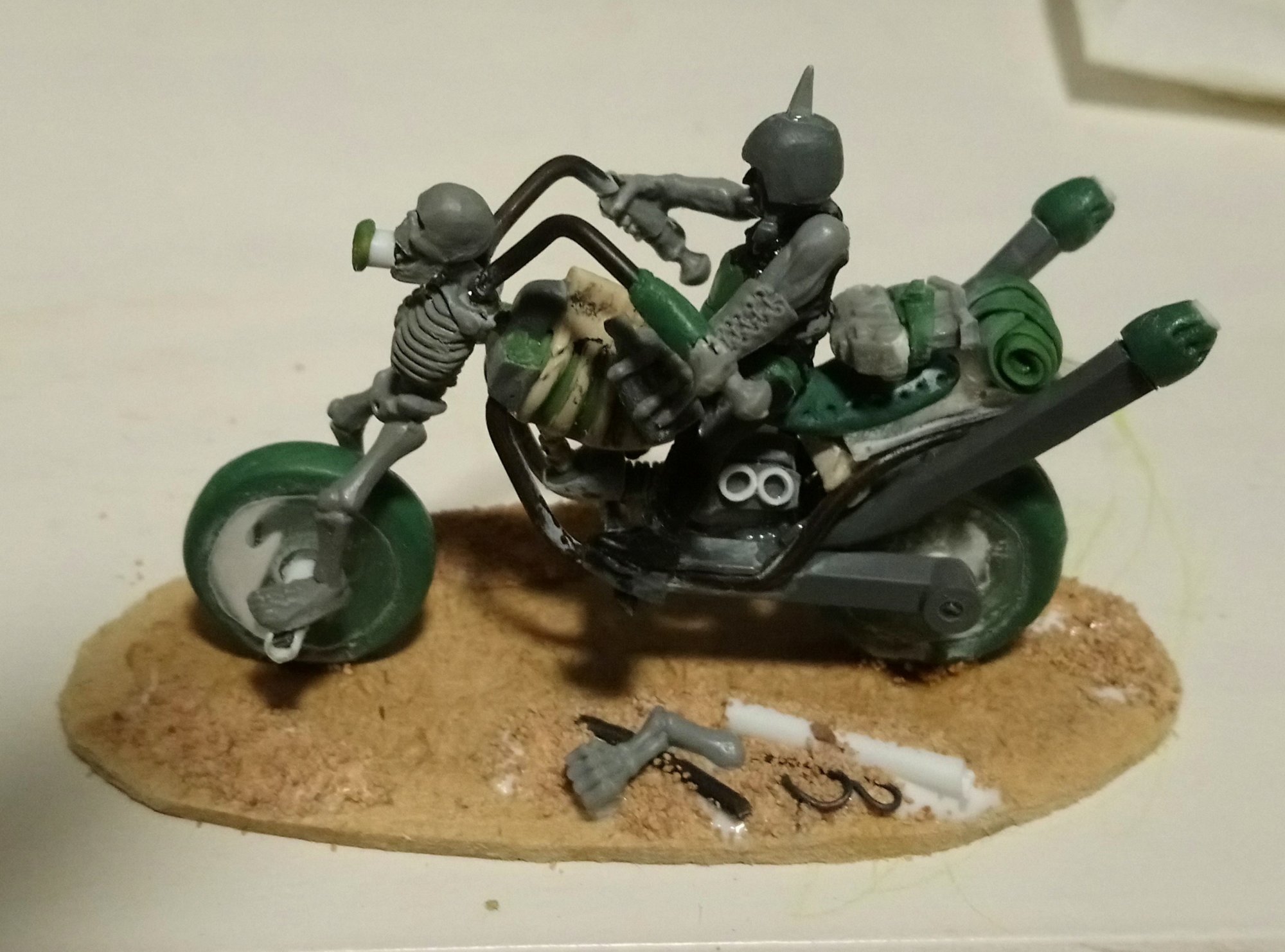 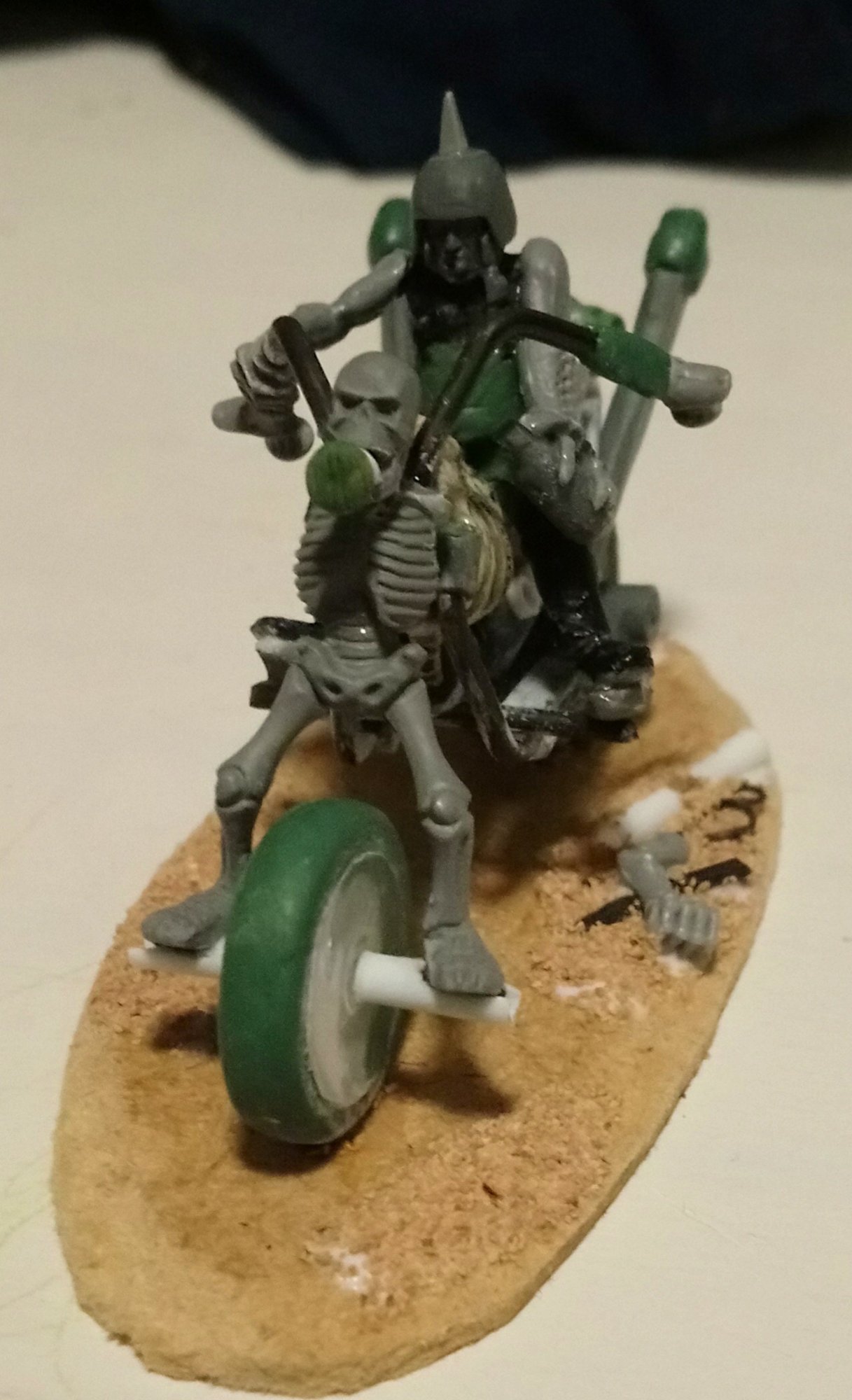 Front-ish view
Obviously I added the front wheel, handle bars (as ape hanger-ish as I could get'em), exhausts and the guy himself. What might not be immediately recognizable in these quick pictures, is the bottle in his left hand and the bedroll and bolt pistol behind him. I hope paint and better photos will bring out some more detail...

So far so good, time for bed so I can get up early and paint (read: spend Saturday with the wife and kids, hoping for a quiet nap time and early bed time, so I can get something done!).
Reactions: Draconic, CaptainDangerous, sump dweller and 9 others

That came together great!
Reactions: MedMos

Nap time for little ones. Got some base colours on the thing. 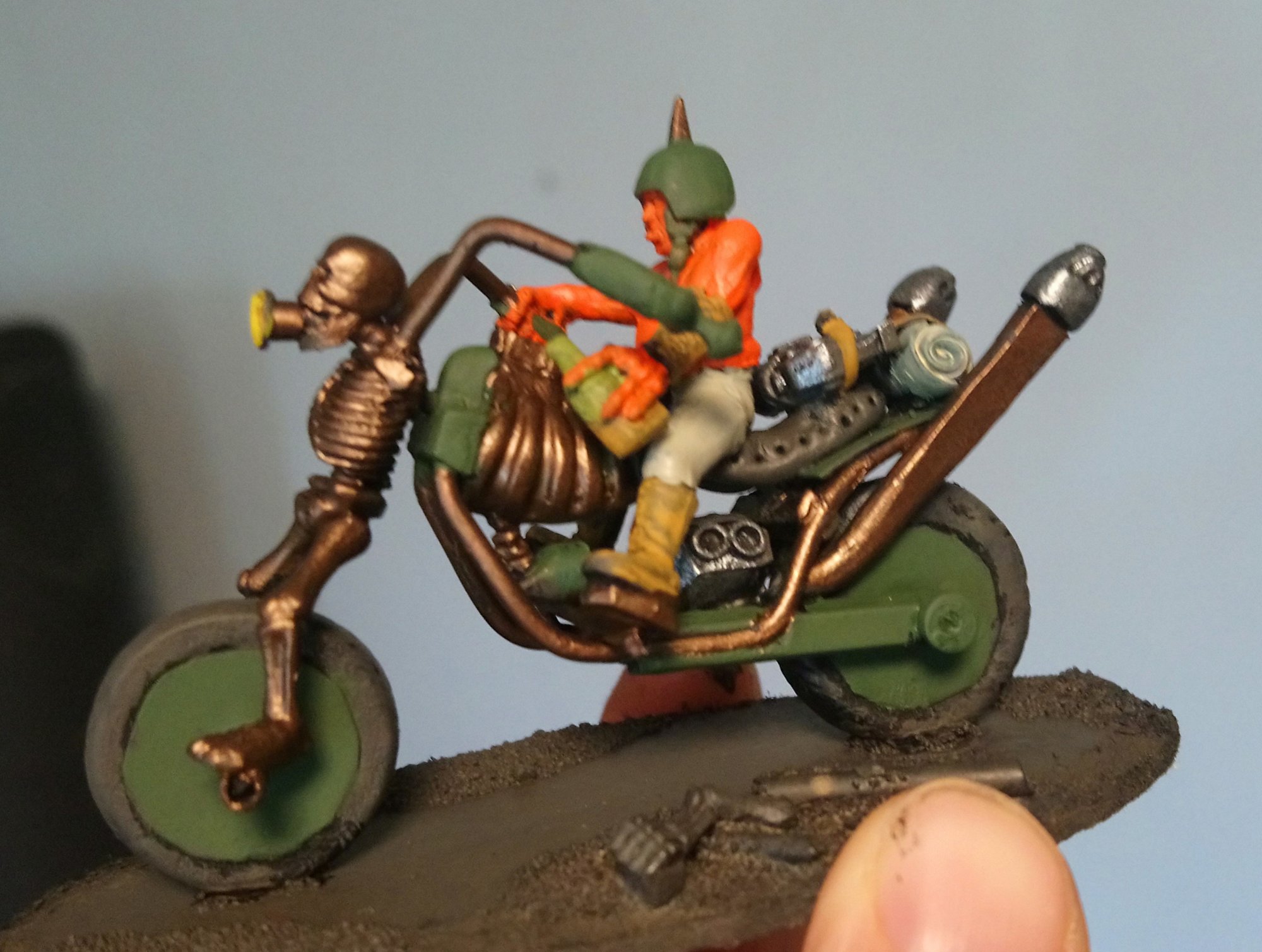 Base colours
Getting there, but it won't be done before later tonight.
Reactions: Fritz, sump dweller, Toffer and 7 others

Something about that reminds me of the ancient 'Sleazy Rider' sculpt, the first bike miniature for 40k.
Reactions: MedMos

I started a new model... I should really finish something other than comp entries, but I seem to have hobby ADD something terrible. So I have decided that I have to finish every model I start before I start building something new, and for every model I build I have to paint two! On the plus side I might get some models done. On the other hand I just might give up on batch painting. I am not really happy with my painting, so it is hard for me to get anything done, but I've decided to try and power through with single models, as getting paint on models is the first step to getting better.

All that being said, under the new 'code of conduct' here is my first build started! It's a wyrd telepath, and I only just gathered some bits and trimmed some of them down. Still a long way to go. 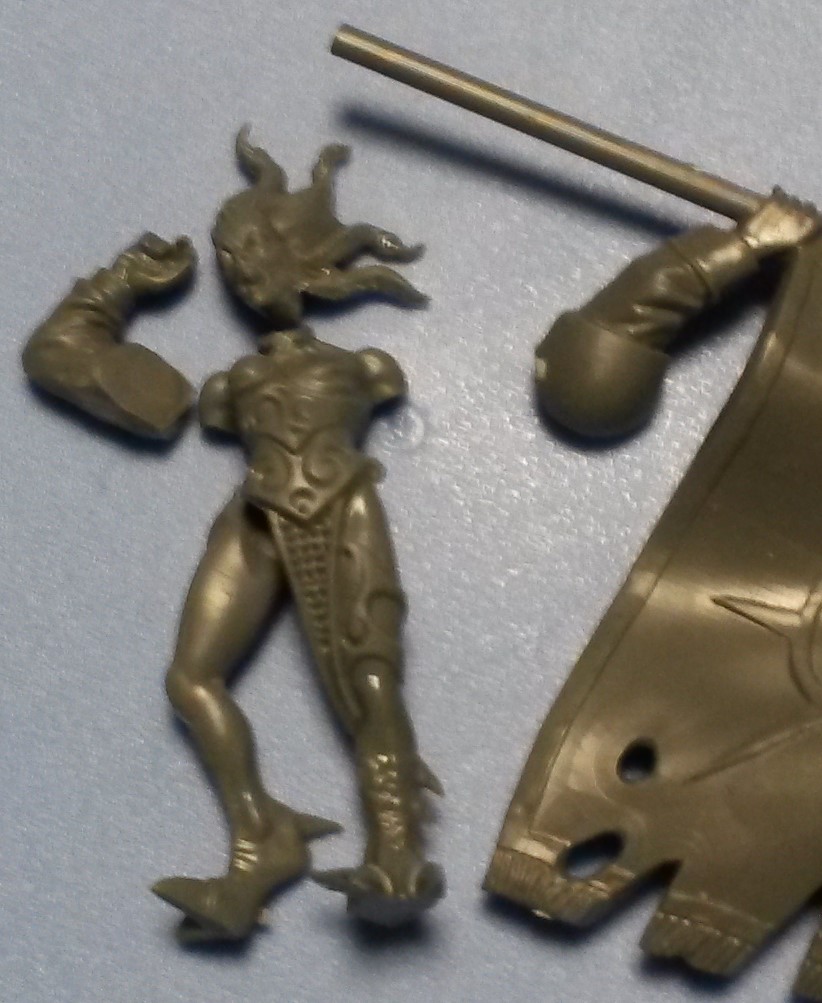 Bits: daemonette with cadian command arms
Don't mind the flag, it is already cut off, as that arm will hold a sword. The plan is to trim the feet and greenstuff boots, greenstuff a long coat of some description (think Delaque-ish but open/flaring) and pose her as if she is using her powers, sword before her and right hand at the temple. And of course shave off any remaining chaos symbols and generally make her less daemonette and more underhive wyrd.

Edit: I know it isn't a whole lot of progress to put up, but posting it motivates me to do more sooner rather than later.
Last edited: Aug 12, 2018
Reactions: sump dweller, Ben_S and Sethmerlin666
Show hidden low quality content
You must log in or register to reply here.
Share:
Link
Top Bottom