Now with a paint job. I've purchased a spare set of Necromunda barricades / objectives, and I'm going to poach one of the terminals, or more likely, the bone noticeboard thing, to mount it on. 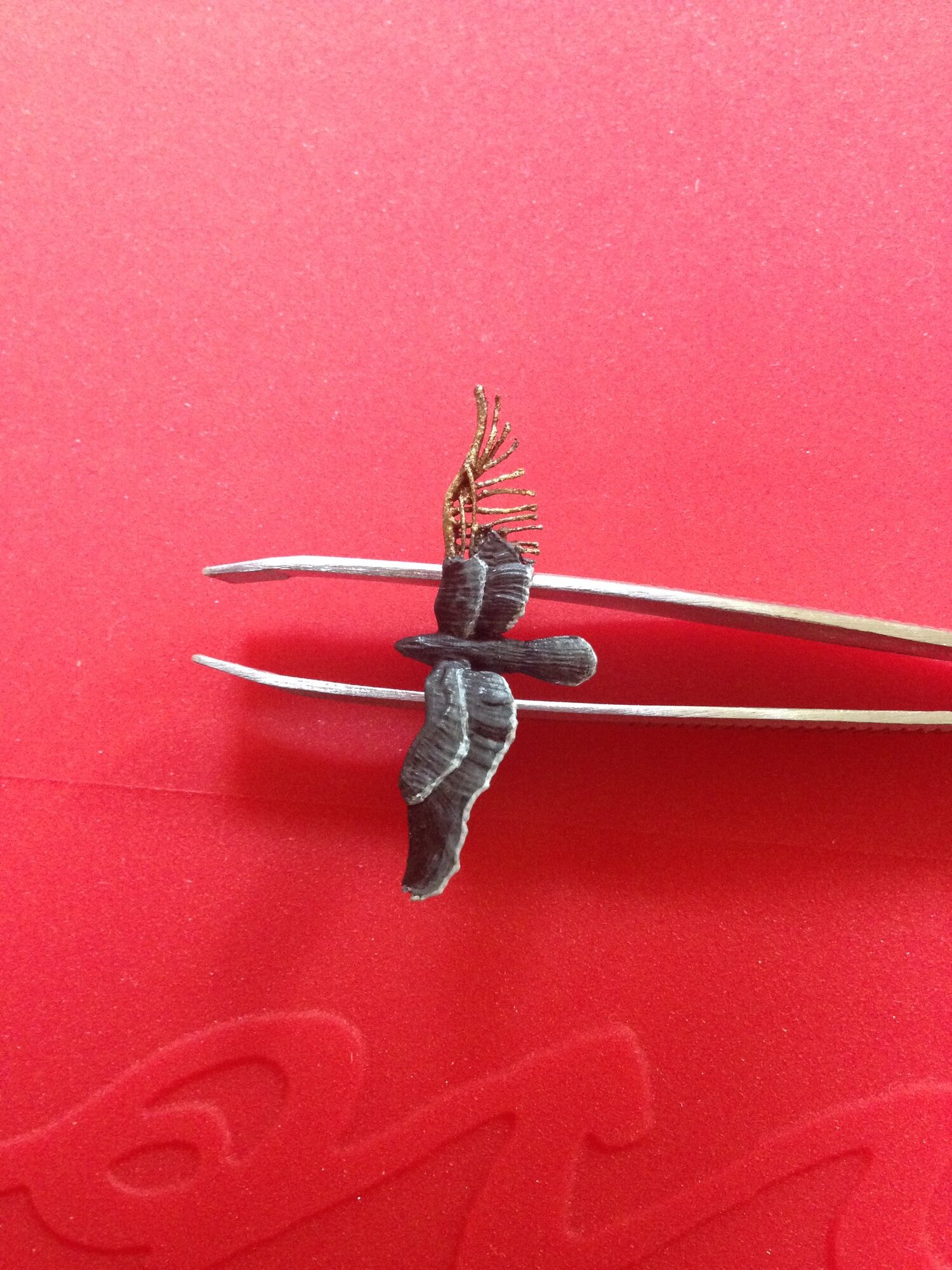 So in this thread, about tooling up a Goliath gang, I mentioned I had an idea for a conversion of a Goliath with Power Hammer as one of my Goliath champions: https://yaktribe.games/community/threads/house-of-chains-goliath-gang.10502/#post-239945 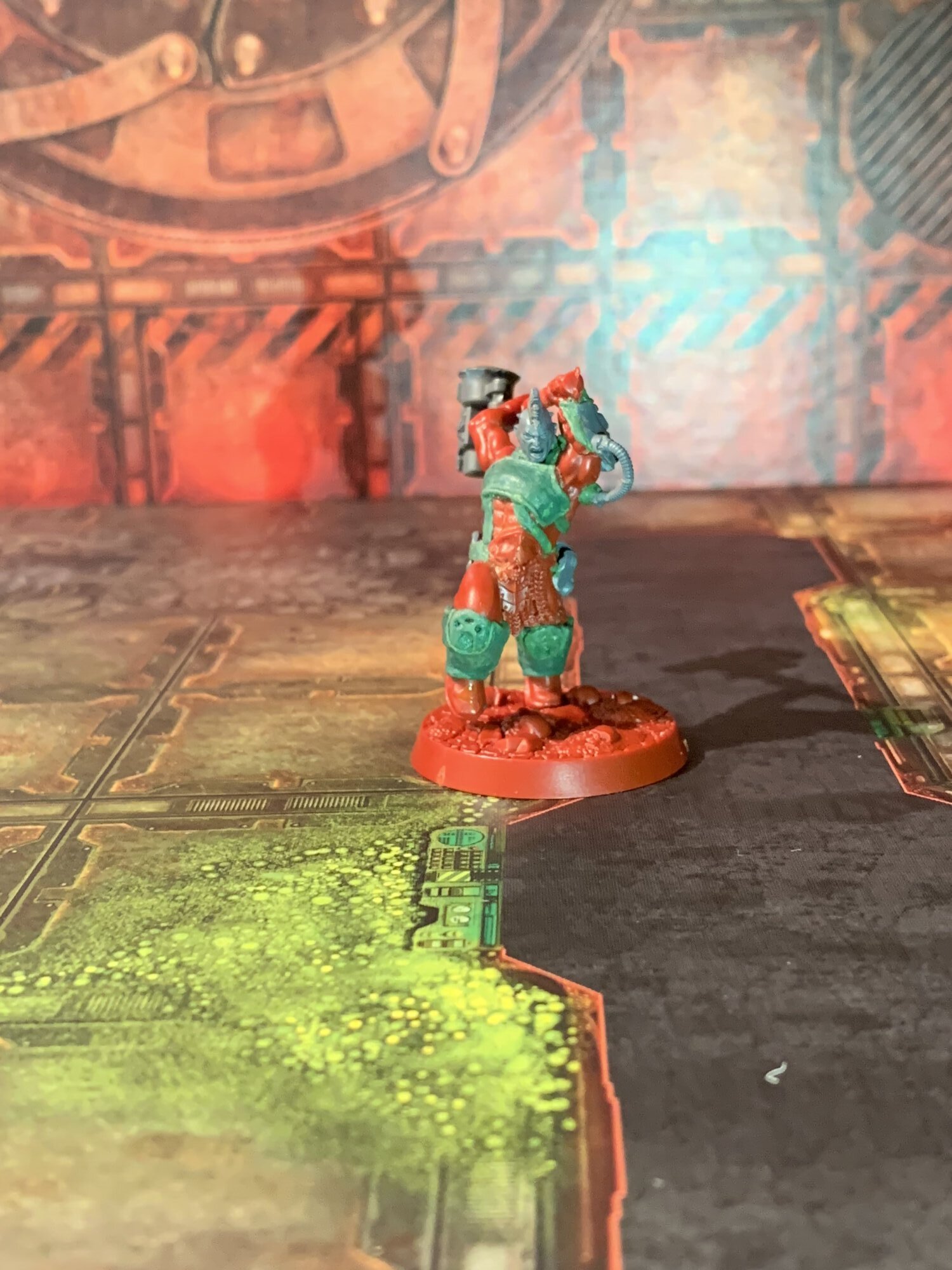 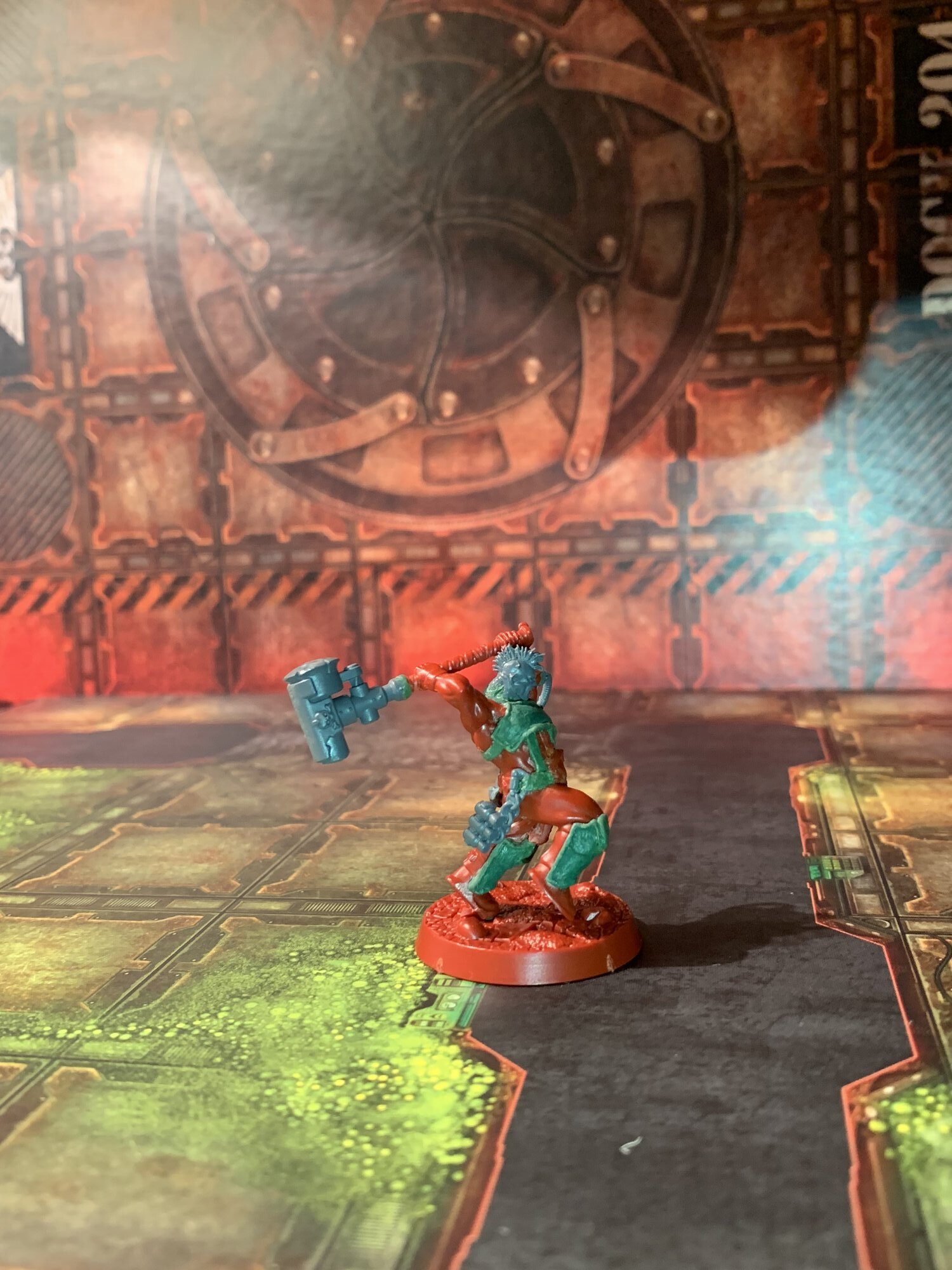 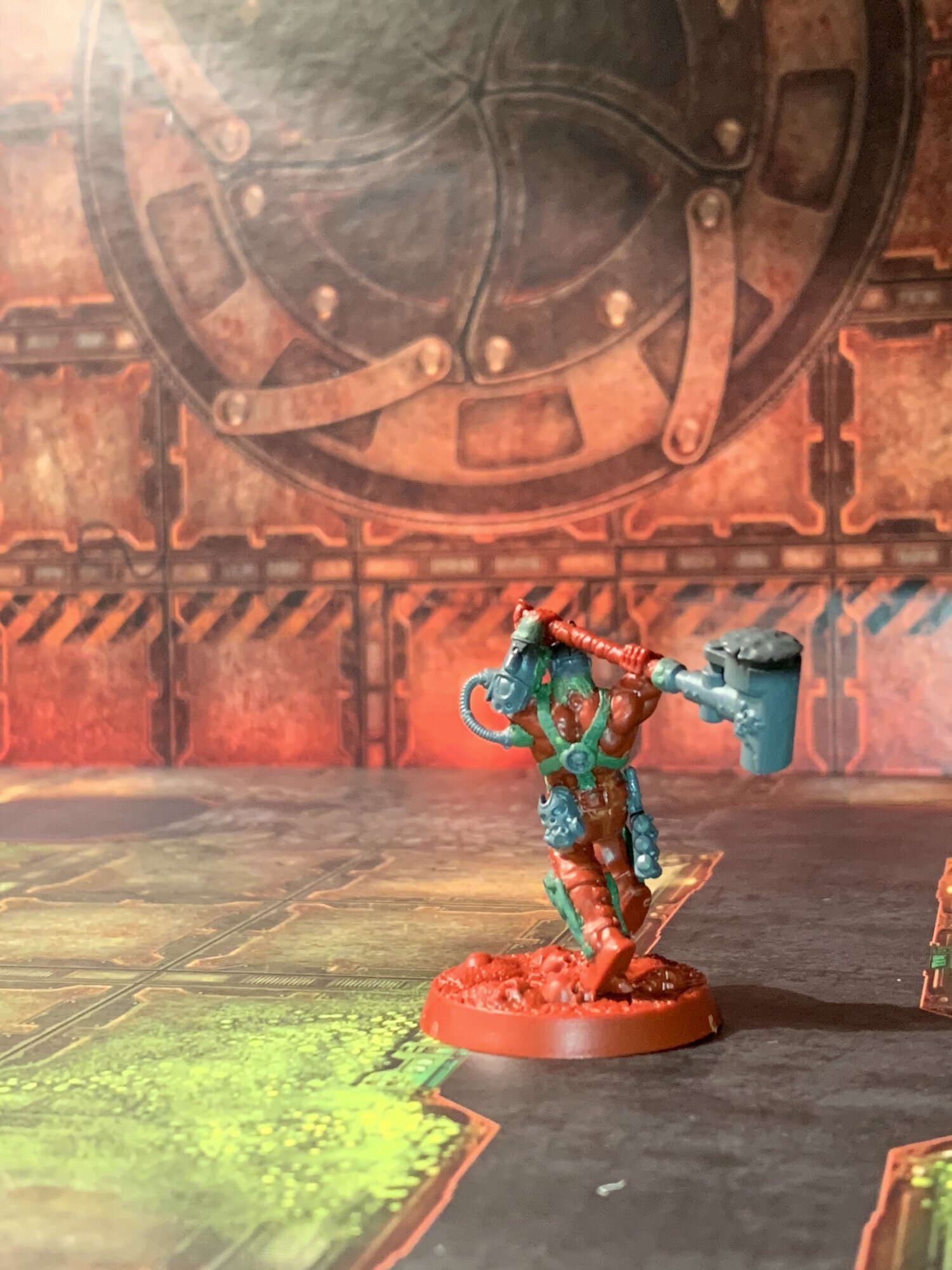 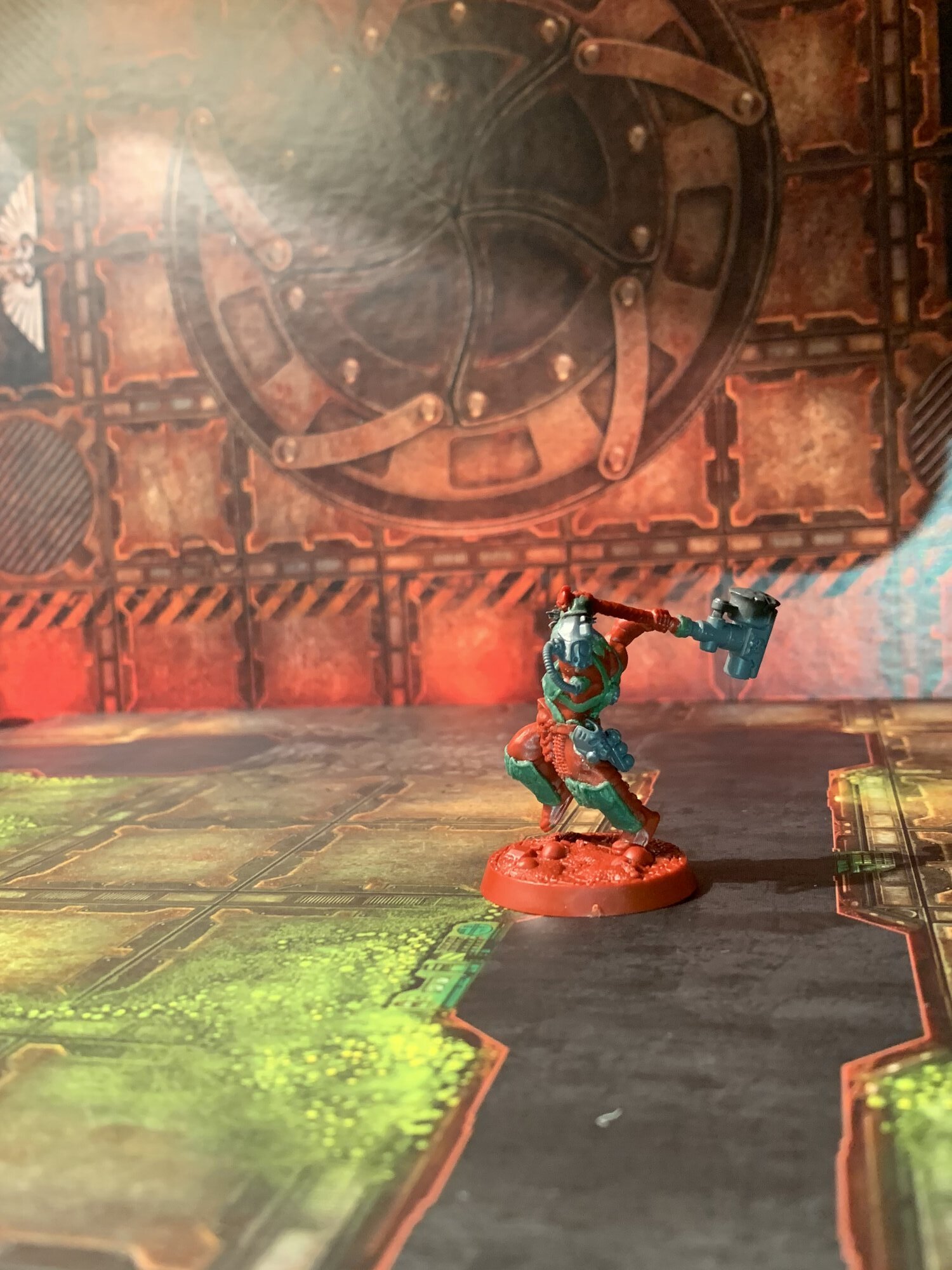 This was the first time I've used green stuff to do anything other than fill in gaps, so fairly pleased with the result (I can see some errors / problems, but I can't see that there's anything I can do now to fix those.

Anyway, the scale of the conversion kind of grew in the making. I was initially only planning on a head swap, and to add the Goliath hammer to the model and call it done.

But I did that, and it didn't really *look* like a Goliath. So I added the mask and the grenades, but they looked too much like accessories I'd added to Goliath it up, so I thought "Ok, I'll try and add a Goliath gauntlet (by the way, the method I used for this was, in retrospect, absolutely insane (at this point I was still trying to avoid using green stuff, because I was not confident of the results). Essentially, I took a Goliath arm from the Goliath sprue, hollowed out the under-side of the gauntlet until it was basically a thin layer of plastic (so thin it was almost like thin card, and bent the same), and then bent it around the (slightly trimmed down) existing arm of the model. And then I realised I'd have to green-stuff the back side of the gauntlet anyway, so it was all a bit of wasted effort.

Anyway, once I'd done that, it looked like a model that had had some Goliath accessories and a single gauntlet added, and it STILL didn't look very Goliath.

So I thought - well, it's because the model has a bare chest - if I add a Goliath-style breastplate with the suspender-type straps they have, then maybe it will tie the model in more thematically with the thing. So I did that, but then realised the breastplate I'd designed looked like it needed straps round the sides as well to hold it in place, and suddenly I had straps coming everywhere around the back, at which point I decided I needed to tie them together. I used a tiny piece from a Plague Marine (some of them have this trio of disks with skulls on hanging from their power packs, so I separated one of these out and used it as the centre of the straps).

And then it looked much more like a Goliath, but the greaves still looked a bit Khorne-y even though I'd tried to cut them down and soften the shape, and by this time I'd thrown caution to the wind, so I just kept going... and that's why he ended up with my attempt at Goliath-style legs as well.

Anyway, that's the story of how a simple head swap and weapon swap ended up with a weekend's worth of greenstuffing..

PS - sorry about the lighting, particularly in the first picture. The angle of the legs makes it very difficult to get enough light on the legs for them not to be in shadow, and the choice was between over-lit picture that didn't show up the hours of work I'd put into the legs, or an overexposed picture that did, so...

PPS - Sod it, here's a picture that shows a better image of the model from the front, even if all the time I spent on the back leg is essentially invisible due to the shadows.. 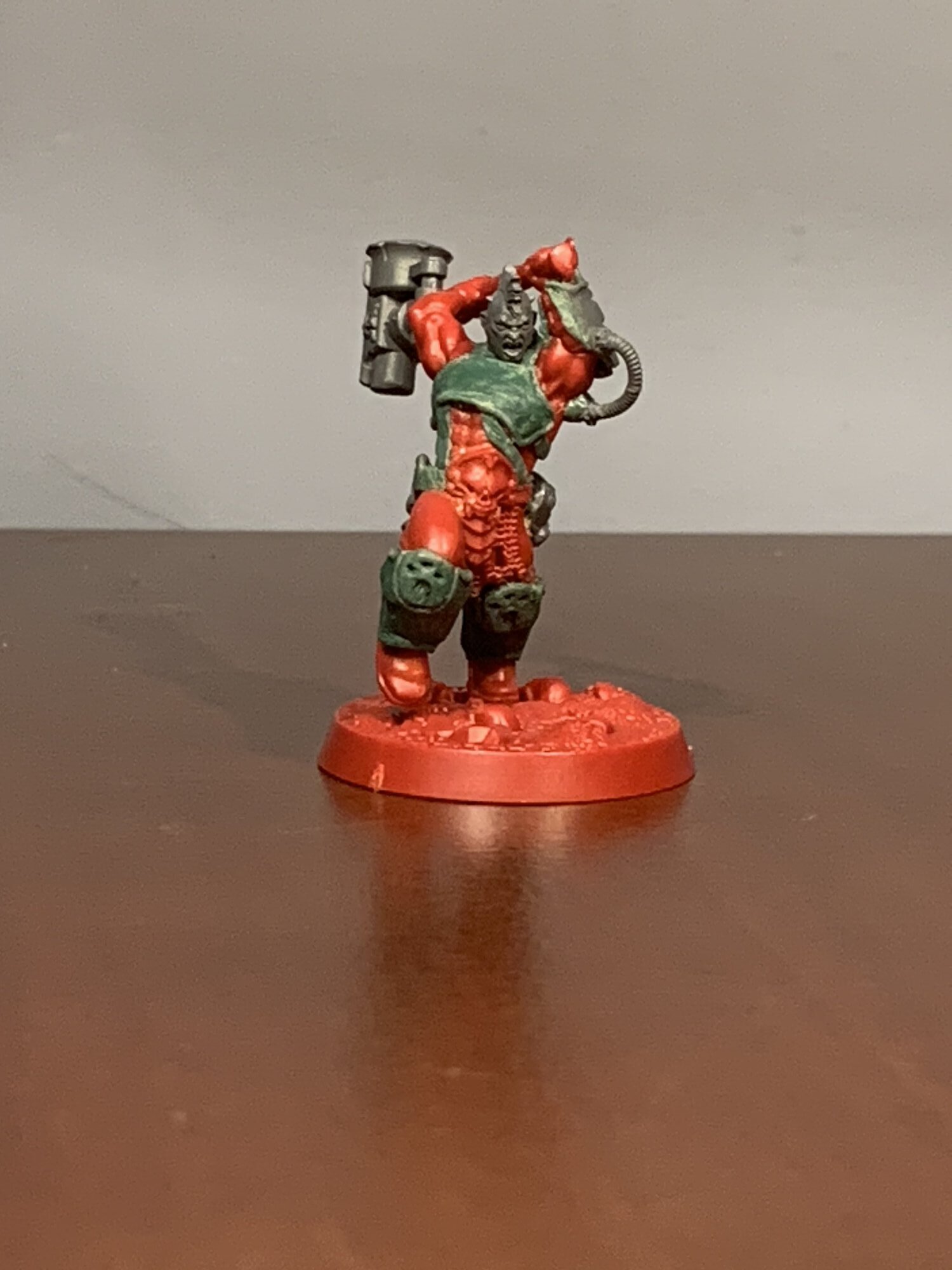 So, some more minor conversion work (some of the green stuff still needs tidying up). Hopefully gives some idea of how compatible with the Ork Nobz kit the Ogryn kit is - a few weapon swaps / arm swaps to get a bit more variety than the base Ogryn box offered! 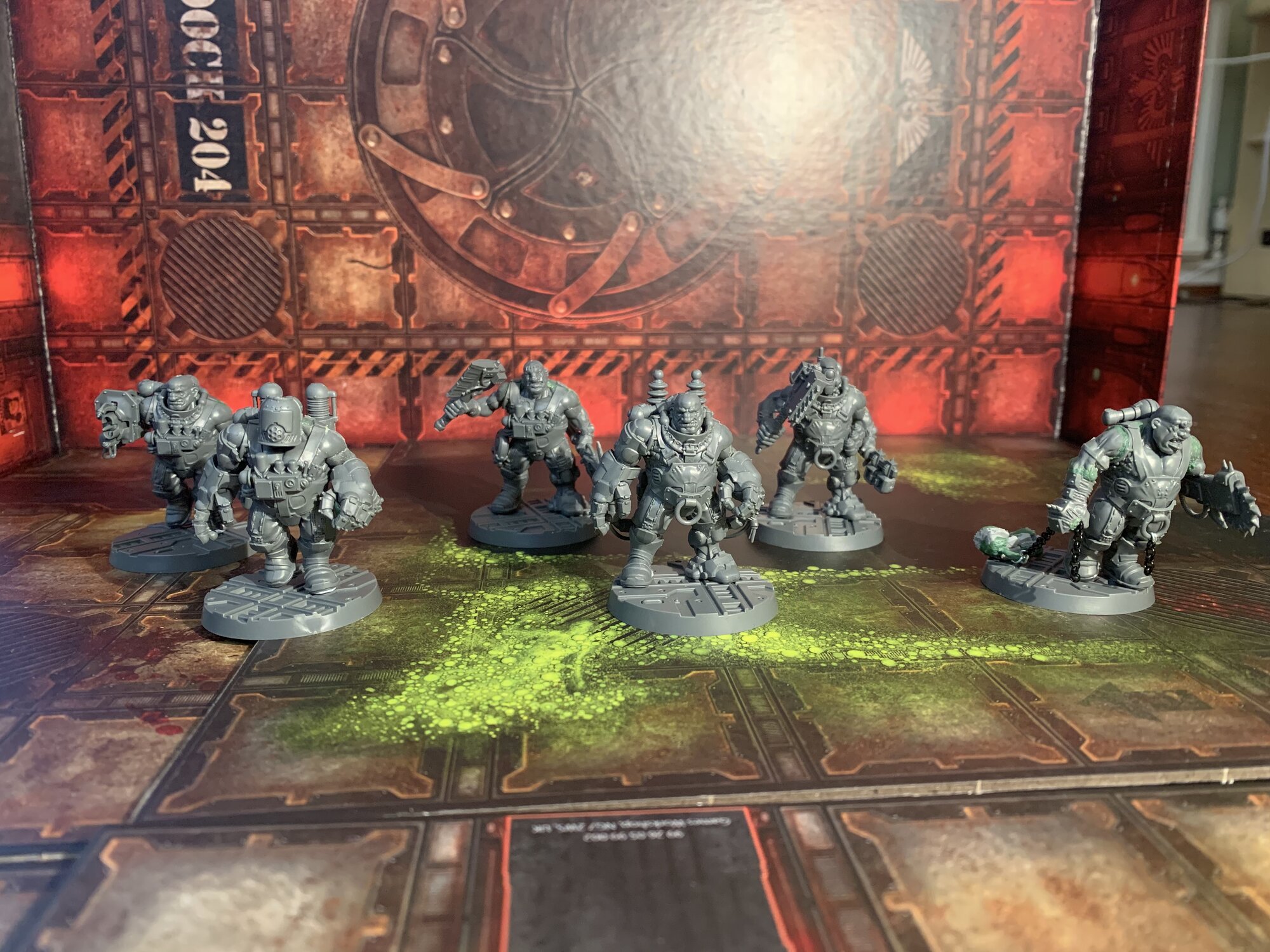 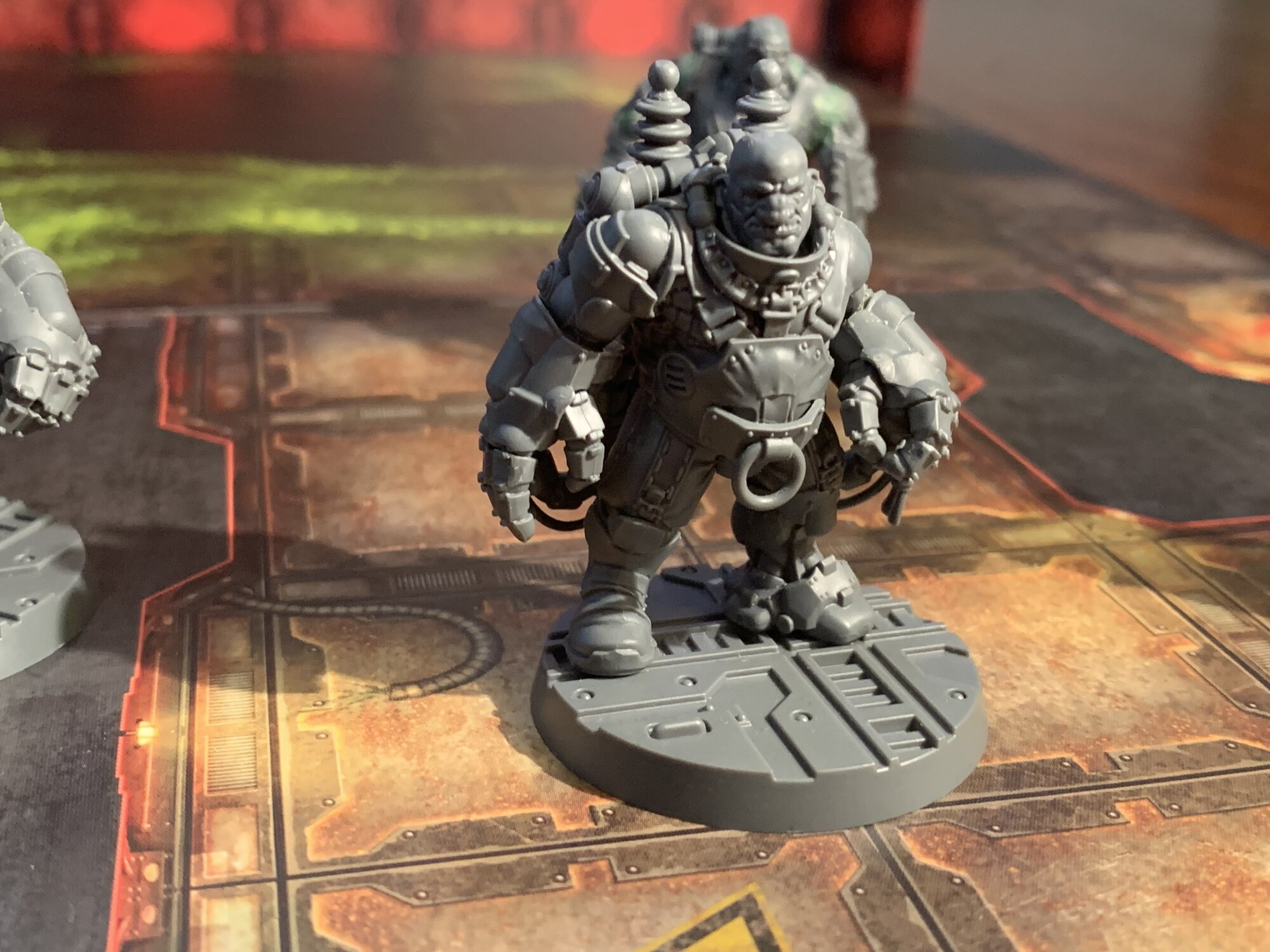 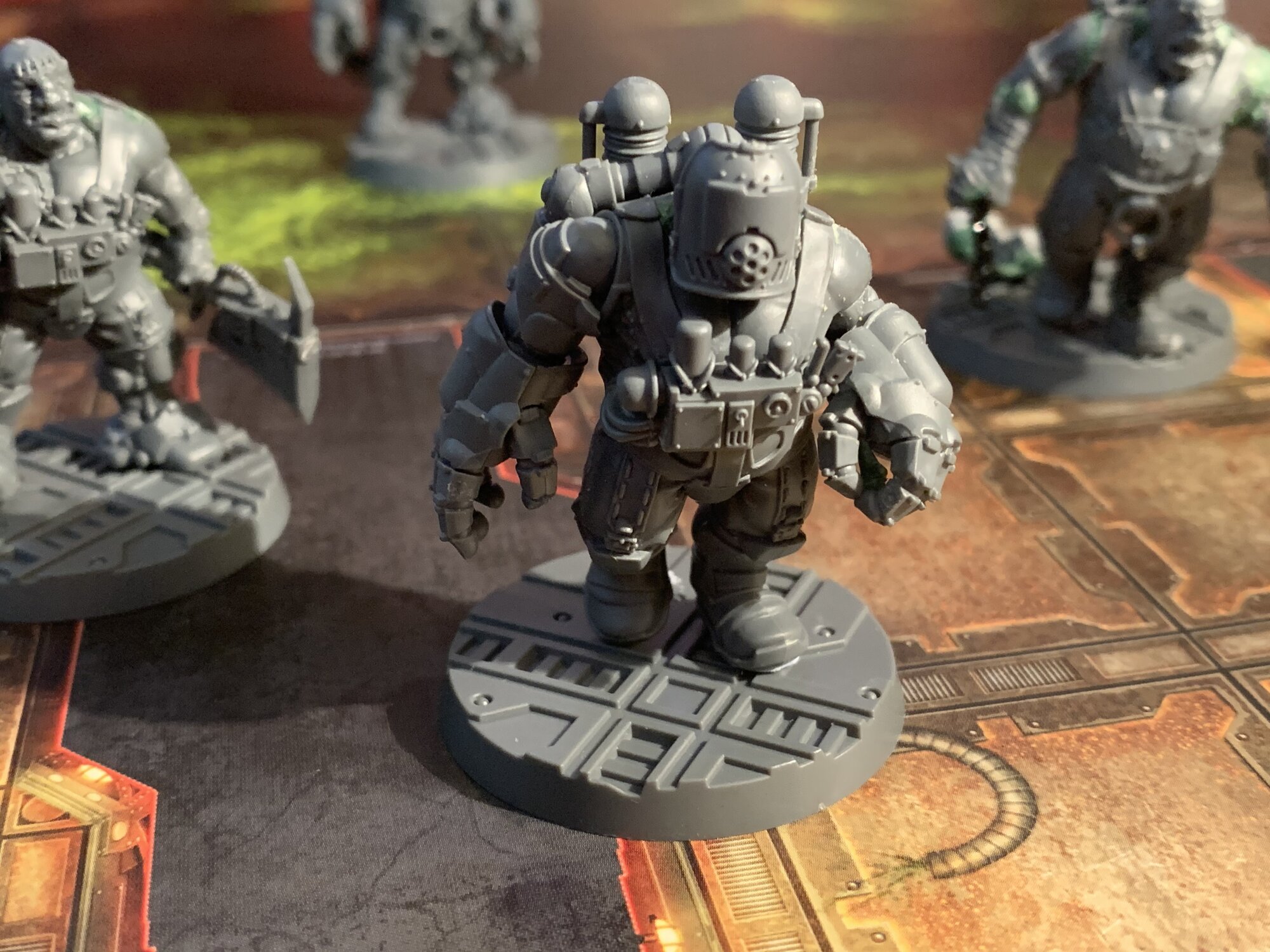 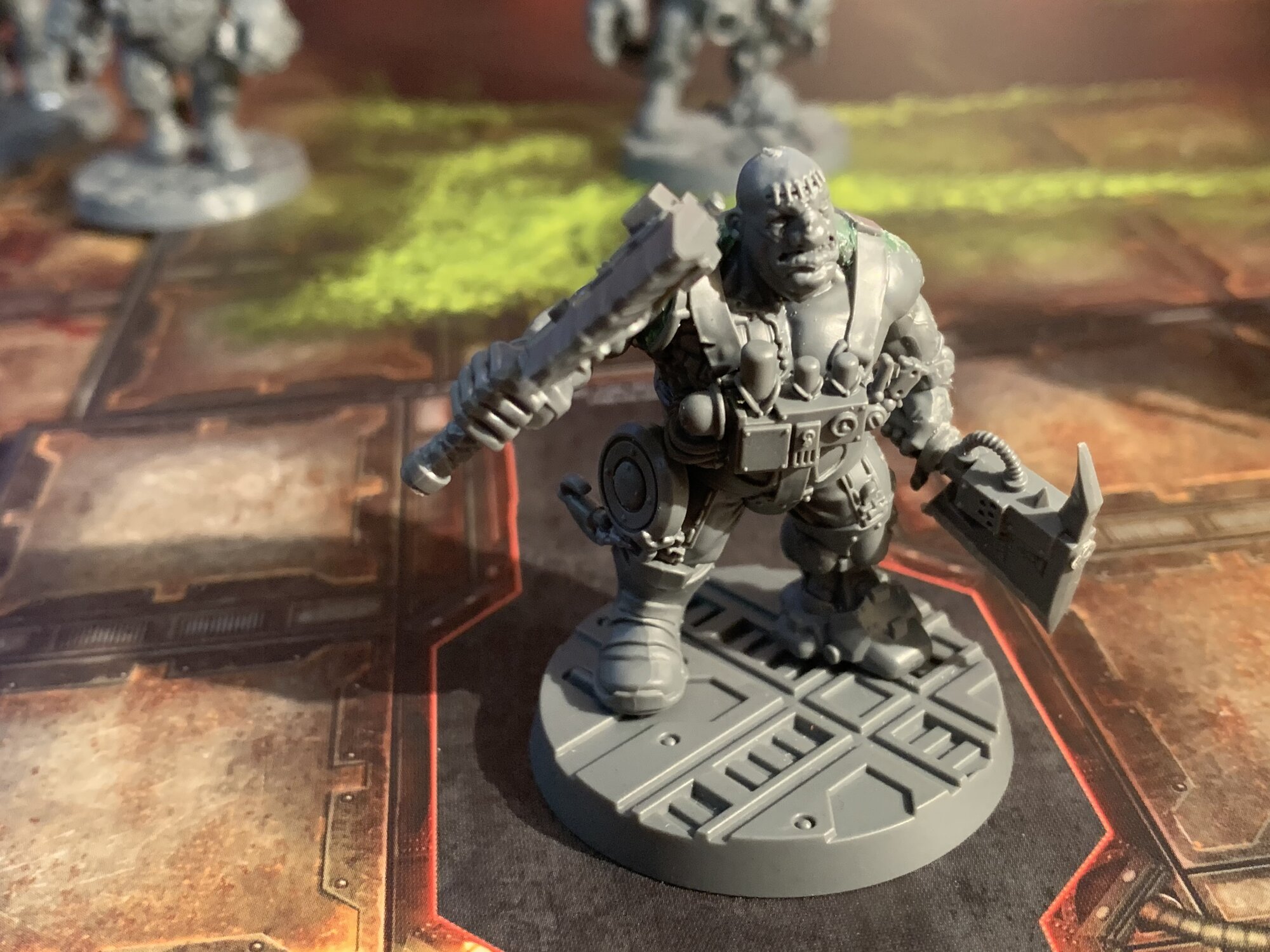 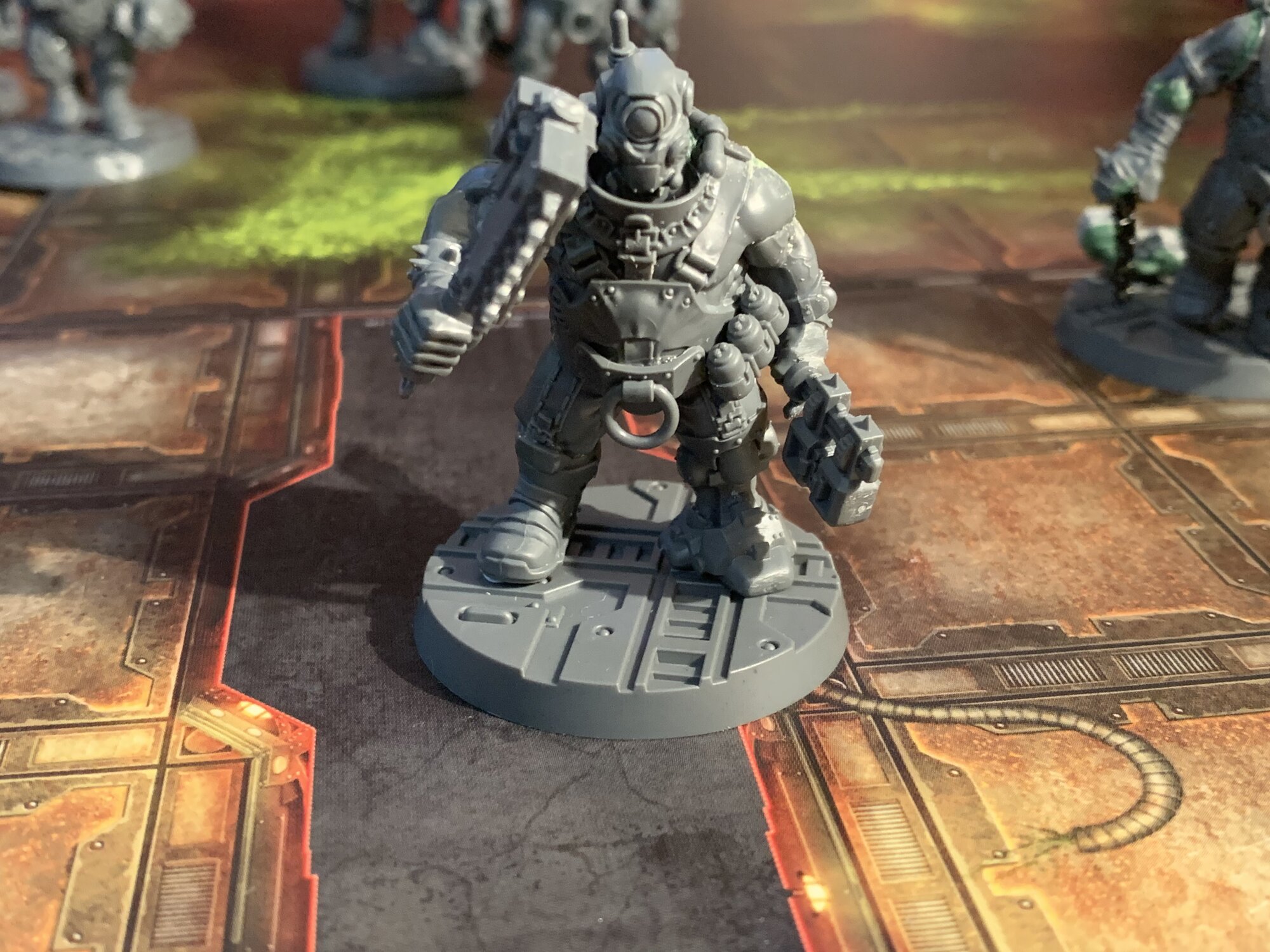 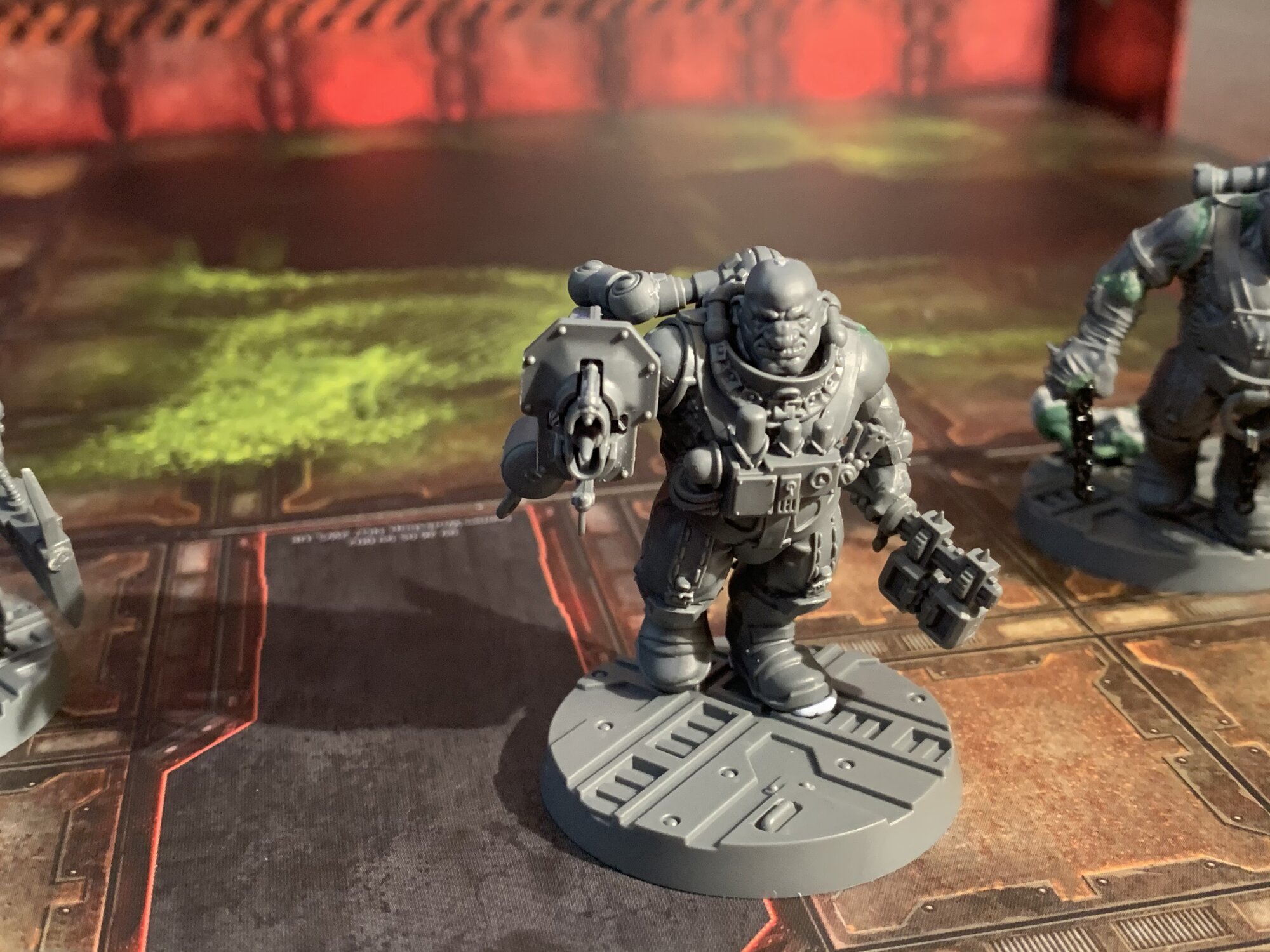 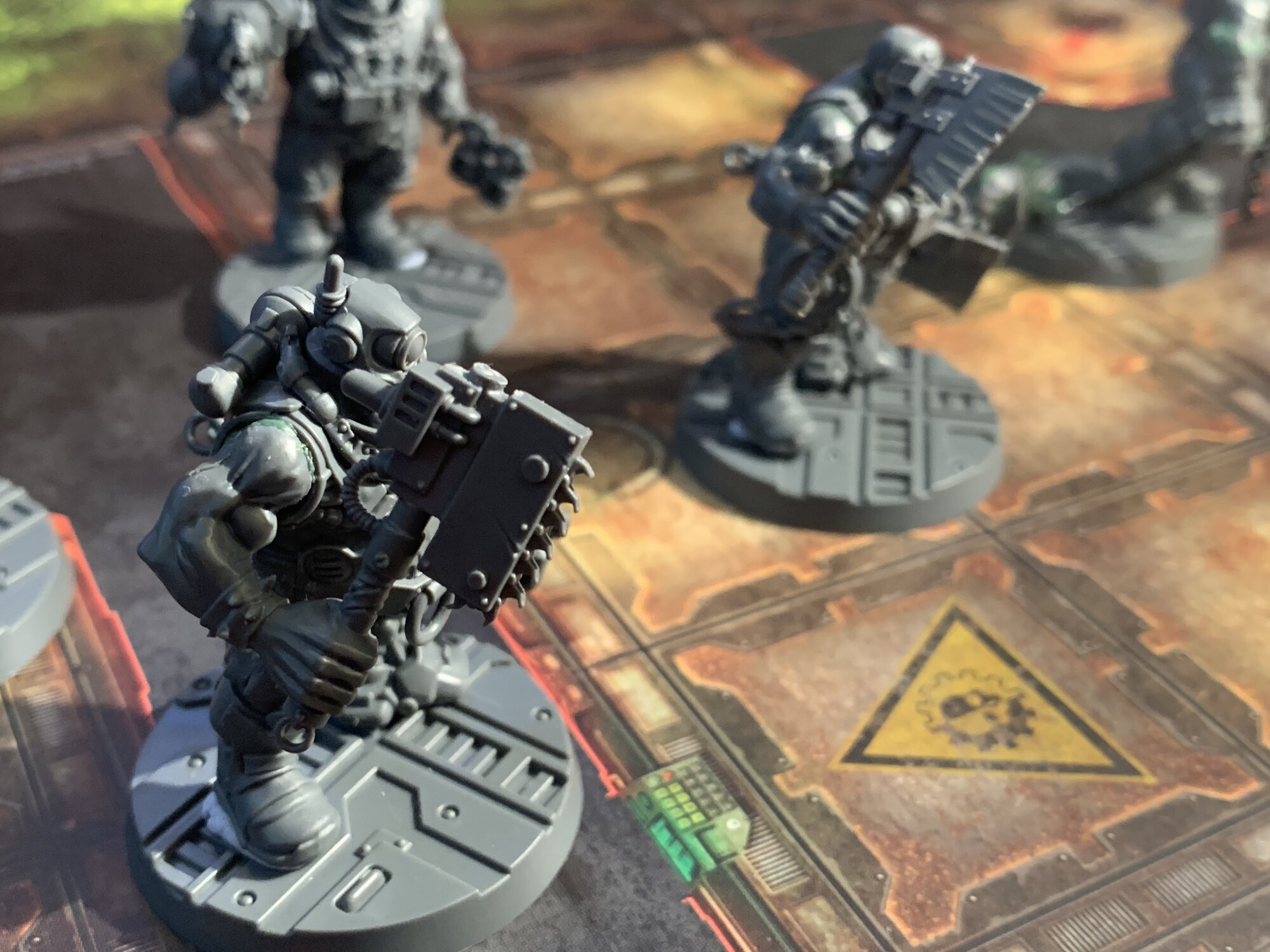 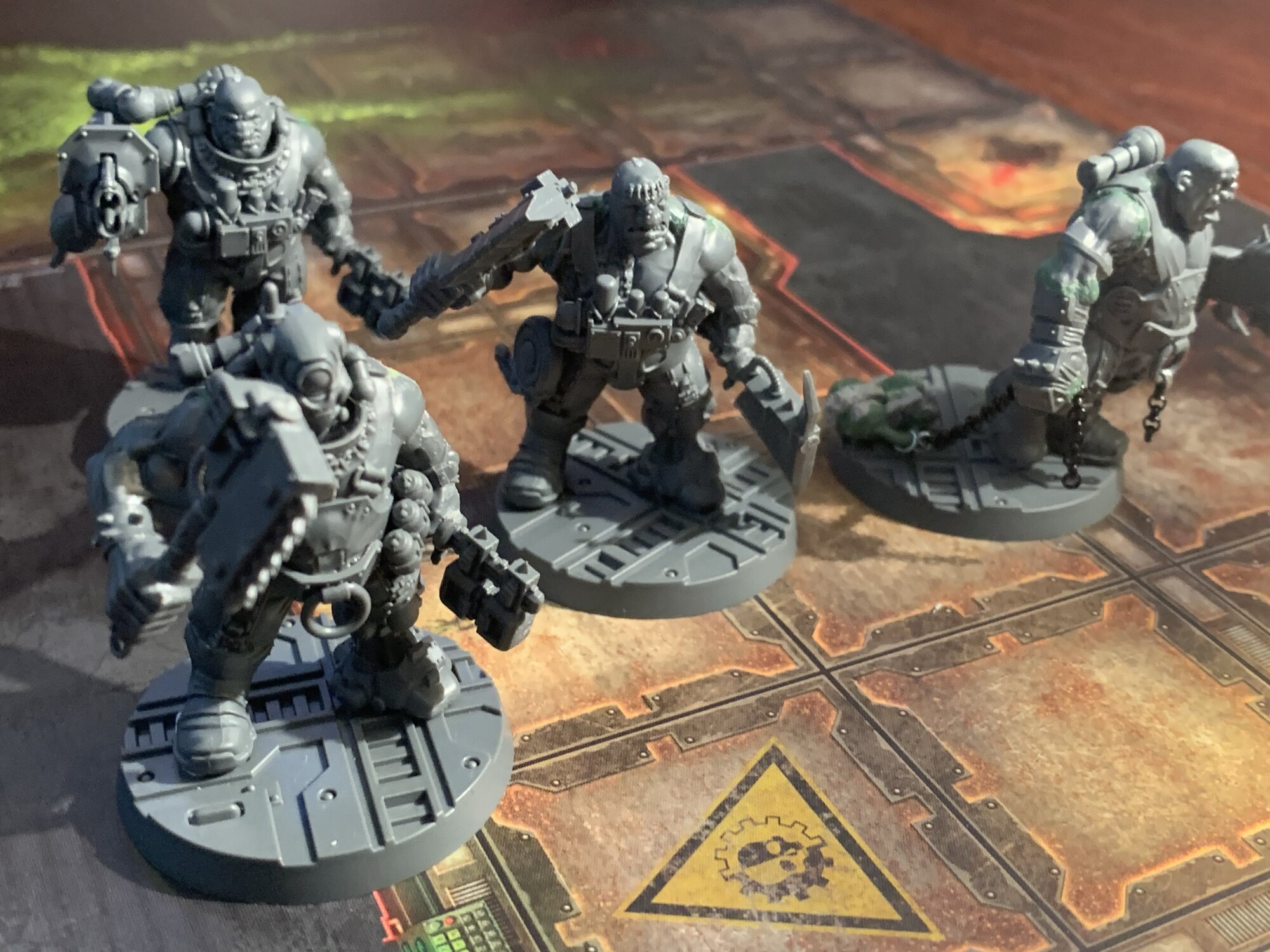 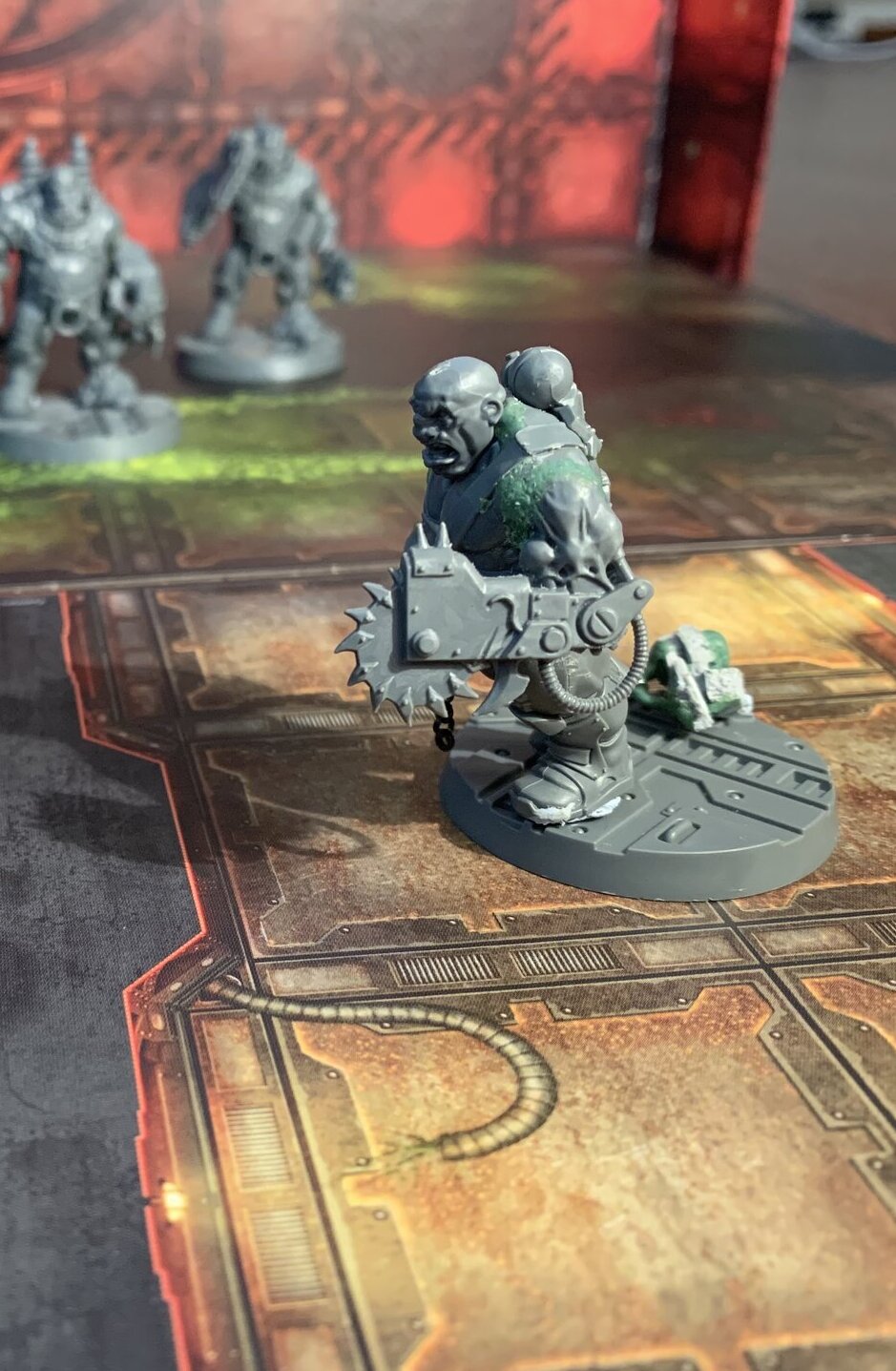 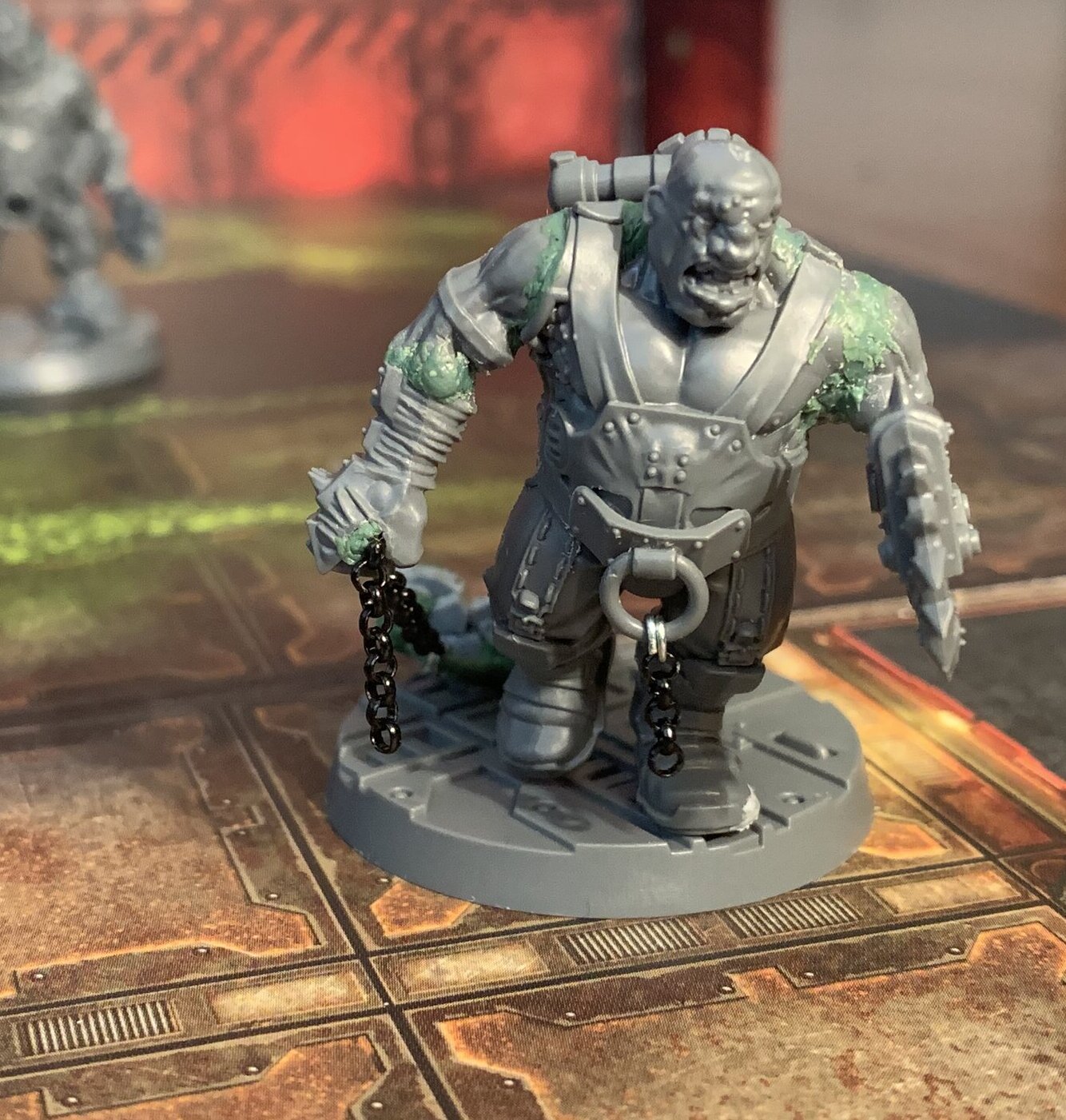 Don't know if it's super clear from the pictures, but the last guy is meant to be dragging part of the wall he was formerly chained to..
Reactions: Ben_S, Nuttowntau, Unslain and 3 others
M

I'm categorically incapable of staying focused on a single project at once.

Anyway, there's this pretty nice BFG miniature some dude did for sale on ebay (no connection to seller, beyond having bought one): 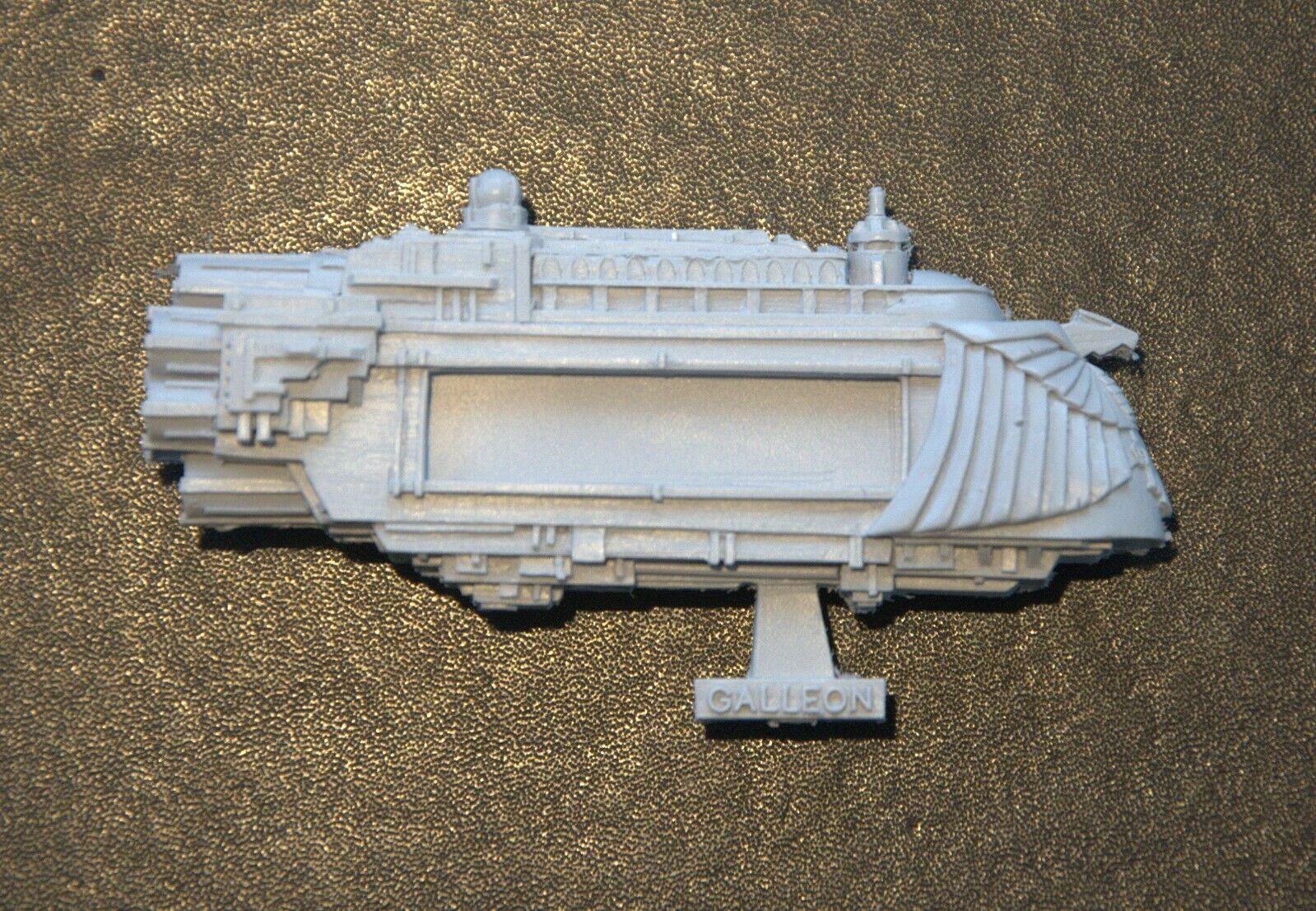 Only when I got it, it felt quite bare, even after adding weapon batteries (didn't have any originals left, so thanks Vanguard Miniatures* for the awesome replacements!) and a couple of fins to make it more "Imperial Cruiser" (yes, I know it was already a Star Galleon, but from a certain angle, without the fins, it kind of looked like a flying rectangle**). 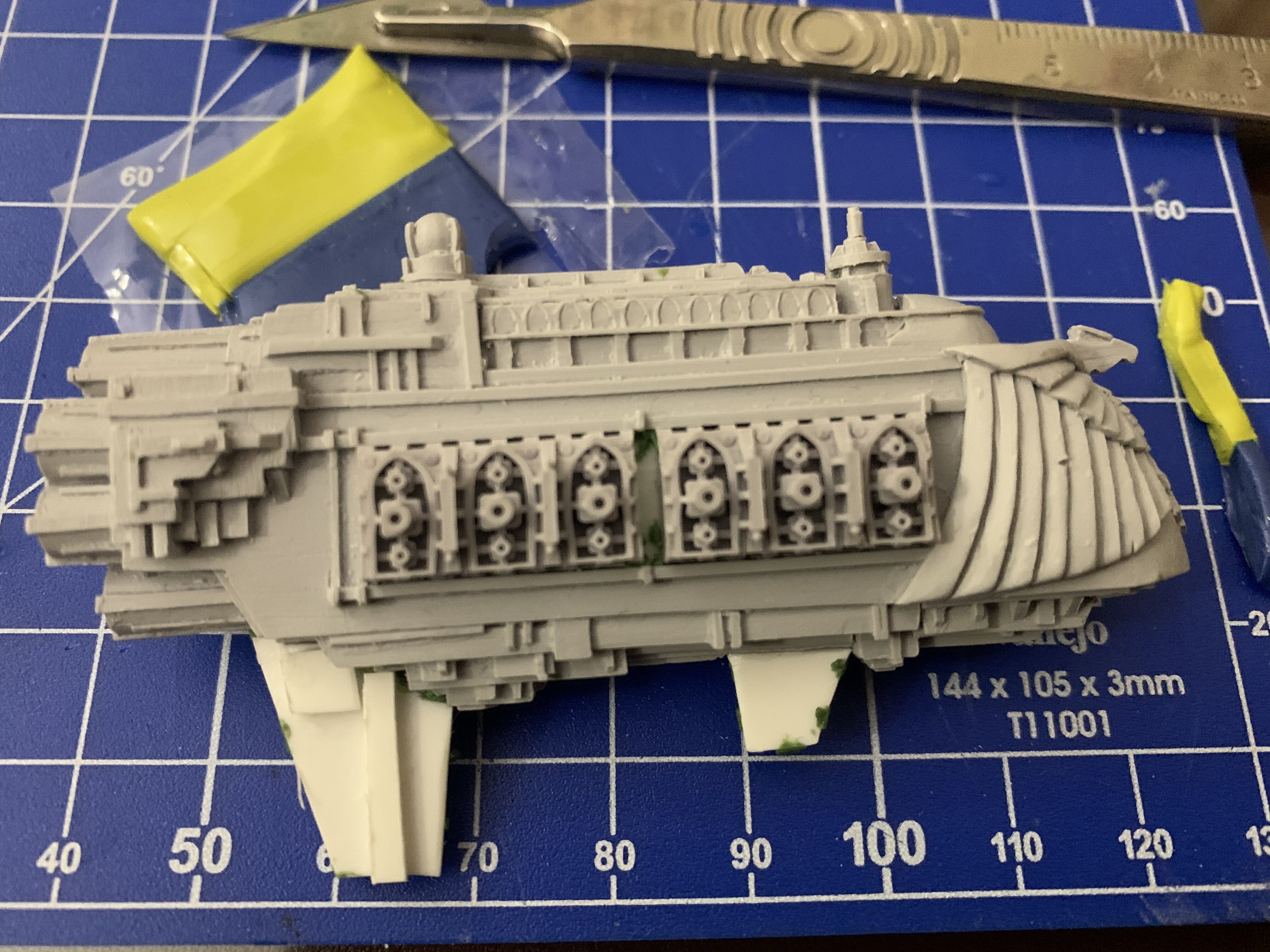 It's a nice mini, but I still felt there was too much blank space for Battlefleet Gothic's aesthetic. This isn't Battlefleet Minimalist! So I got to greenstuffing.

The greenstuffing was a long and incredible painful process. Maybe I've got huge fingers, or maybe I'm badly co-ordinated, or maybe everyone else is privy to some secret that I'm not, but working on such small details, and on a relatively small miniature which is essentially just one flat block, meant that I could only do a bit at a time, as if I moved on to try and work on a second section before the first one was properly cured, I just ended up smearing all the detail I'd spent the last half hour working on with an errant thumb. 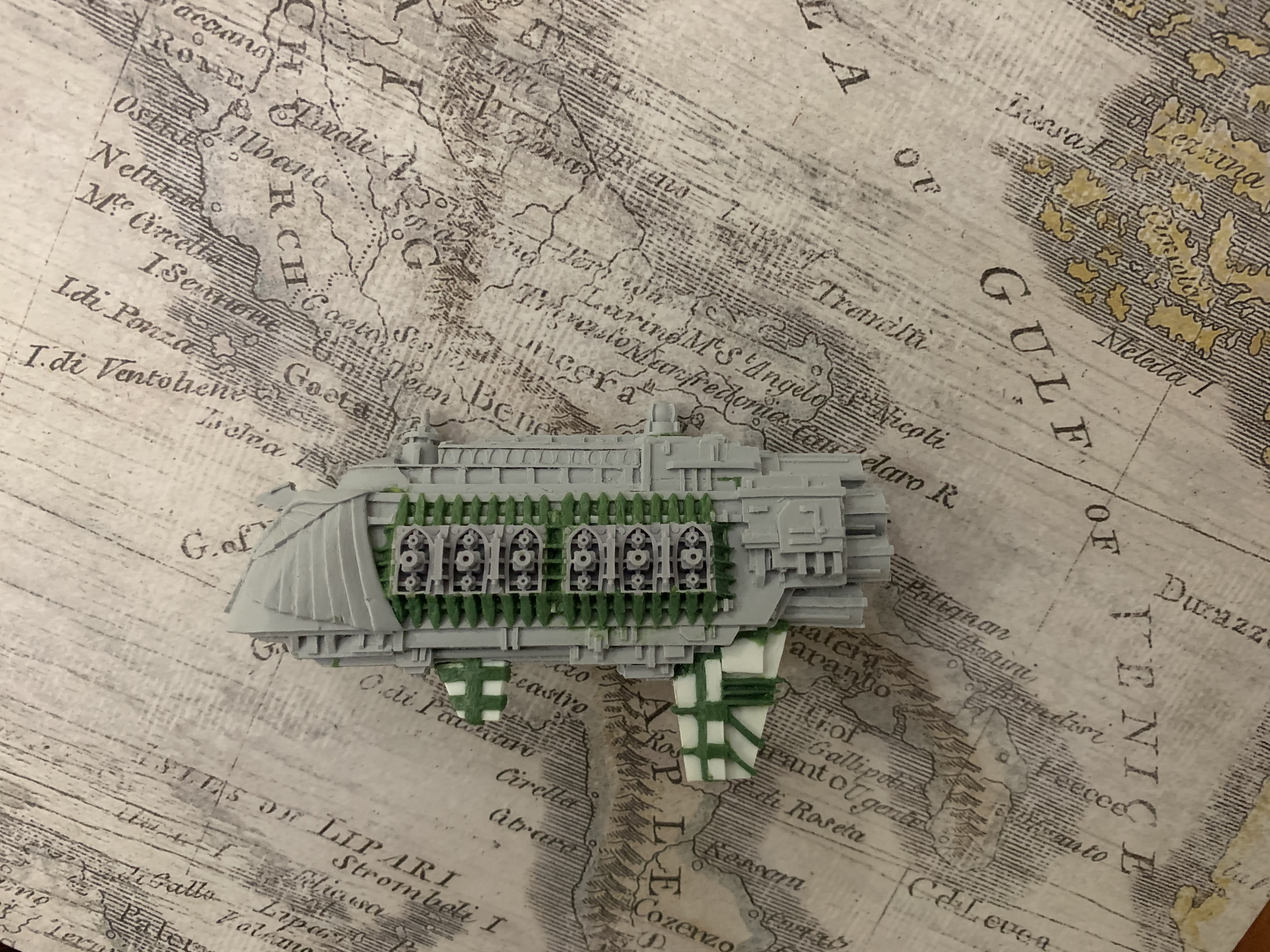 One thing which I'm quite pleased with, but which doesn't show up on pictures, is that I mounted the batteries proud from the model (rather than in the recessed hole the sculptor left for them) and the green stuff all around slopes out to meet the edges of the batteries on all sides - so the weapon batteries end up looking much more like the guns on the cruiser in the Battlefleet Gothic box art, which stand proud from the ship, than the flush batteries the official models actually ended up with.

* No connection to Vanguard Miniatures either.
** A beautifully sculpted rectangle for sure, but still a rectangle.
*** Points for first one to get the reference.
Last edited: Apr 16, 2021
Reactions: Unslain and cainex1

Wow, I see what you mean. I strongly dislike working with greenstuff, and that’s some fiddly detailing you did. But it came out quite nicely. Well done!
Reactions: Malevolent Pink Cat

That's a lot of buttresses to add in! Did you make a press mould or something to help get such a consistent shape and spacing to them all?
And those fins do improve the model no end, good move.

I still mess up with the wandering thumb of doom when sculpting; did last week in fact. For pieces without a base (based models go on a painting handle), I find a universal work holder useful. The link is just an example - the one I have is from hobbycraft and has a weighted base, though I see greenstuff world do one too. Sort of wish I'd got one with a handle, as I often end up picking mine up anyway and that's too heavy for any degree of comfort. The holder does restrict you to working on one side at a time, but then doing otherwise is almost guaranteed to result in squashed putty anyway.
Reactions: Malevolent Pink Cat
M

A press mould would have been a good idea - wish I’d thought of it!

Instead to do the buttresses (and actually most of the detail) I got the basic shape done with a sculpting tool, and then used sharp-nosed tweezers to finish the shape. A quick squeeze with the tweezers means you get both sides straight at once, and each buttress relatively even as a result.

In terms of spacing, if you look closely there are very small buttresses or ledges built in to all the edges of the weapon batteries, so that helped set the spacing - and then for the rest I just eyeballed it.
Reactions: cainex1 and Unslain
Show hidden low quality content
You must log in or register to reply here.
Share:
Share Link
Top Bottom