Sorry to hear about your loss. I lost someone last year so if you ever want to chat/vent hit me up.

Your painting looks amazing. Such attention to detail. I love it when folk use a reduced color palette like you have. Not a skill I can replicate but I can enjoy your work nonetheless.
Reactions: trollmeat, MusingWarboss, Blood Donor and 1 other person

The head on the Cawdor is very cool. I can't get over the pic of the construction apron with a chest mounted drill; I have no idea what job that would be for or why you would want your drill/impact driver holstered on your chest, but kinda want to know more of where you found those tool harnesses.
Reactions: trollmeat, Deleted member 10658 and MusingWarboss

i don’t know how i missed the first line. sorry for your loss, @MusingWarboss
Reactions: trollmeat, Deleted member 10658, Blood Donor and 1 other person

Thank you all, it’s a tough time as you’d expect... never realised there would be so much paperwork, phoning around and other stuff to do right at the time you feel least like doing any of that!

Getting there slowly but there’s something very intrusive about having to sift through and unravel someone’s life just after they’ve passed.


Blood Donor said:
kinda want to know more of where you found those tool harnesses.
Click to expand...

One for @cainex1 to answer there, he posted up those pictures.
Reactions: trollmeat, Deleted member 10658, Blood Donor and 1 other person

Condolences from me too.

It hardly matters in the circumstances, but the Cawdor/Bretonnian mash up looks ace.
Reactions: trollmeat, Deleted member 10658 and MusingWarboss

MusingWarboss said:
(because I can’t stick to one thing apparently).
Click to expand...

It's the damnation of (almost) us all, never done anything before starting a new one!!

Brother Ventaille looks great, both painting and conversion! Perfect also to represent a countryman of one fedual worlds maybe! Congrats!

Cool works on the goliath too, orange is one of my favourite colour so...
Reactions: Deleted member 10658 and MusingWarboss

So now that Hitachi is changing it’s name, are you going to alter your plan for the Goliaths?

Punktaku said:
So now that Hitachi is changing it’s name, are you going to alter your plan for the Goliaths?
Click to expand...

Nope! The Goliaths are going to carry on being angry construction workers and may now be even angrier!!

I didn’t have a plan for a guy called Hitachi so far... I may have to consult my list...

Yeah, not sure what went into that decision, but its looking like they kept their colors.

So in an effort to pick up some "hobby mojo" I did a delve into the murky depth of the ancient bits box. Ignoring most of the crap in there I discovered a few relics from 1995's boxed game which had been previously mauled and mutilated by an over enthusiastic younger me.

Salvage of old damaged and broken models is actually quite satisfying isn't it? Even though I really should be painting my existing models not making new ones to add to the ever expanding mass of forces that look at me and judge...judge..jud... Err... Where was I?

Oh yeah. So I cobbled together this cheeky little bugger from spare modern Goliaths and a leftover classic. 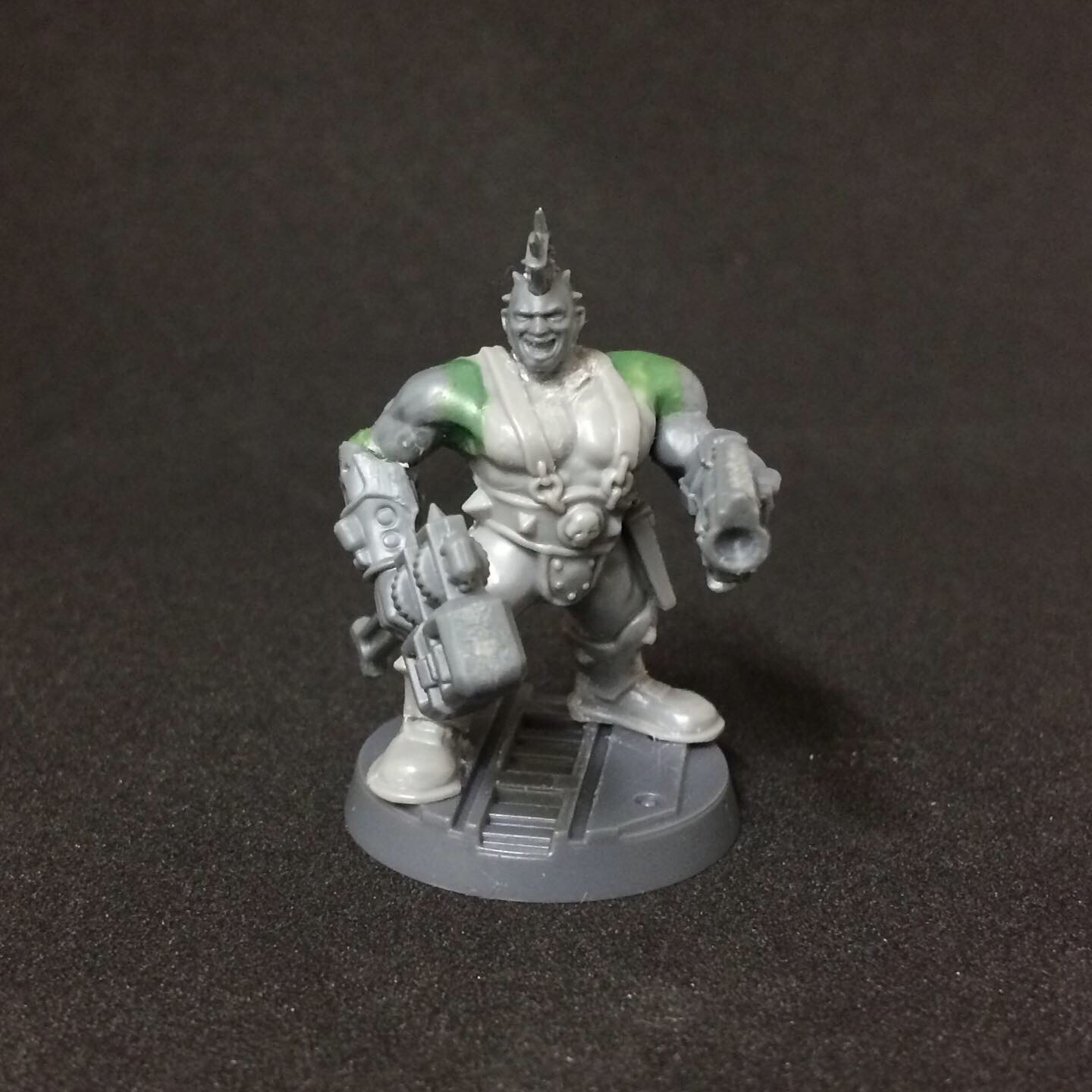 “Harris”
Happy chap isn't he? He likes painting hazard stripes, stimming, whacking people in the spuds and thinking he's the boss. He dislikes Escher as they're taller than him and he has a complex about it. One day he'll stimm enough to be as tall and beefy as the other Men. He also dislikes Escher as there are no spuds to whack. So he has to aim higher at boob level which also just reinforces his height issues.

Here he is hanging out with with Black and Decker. 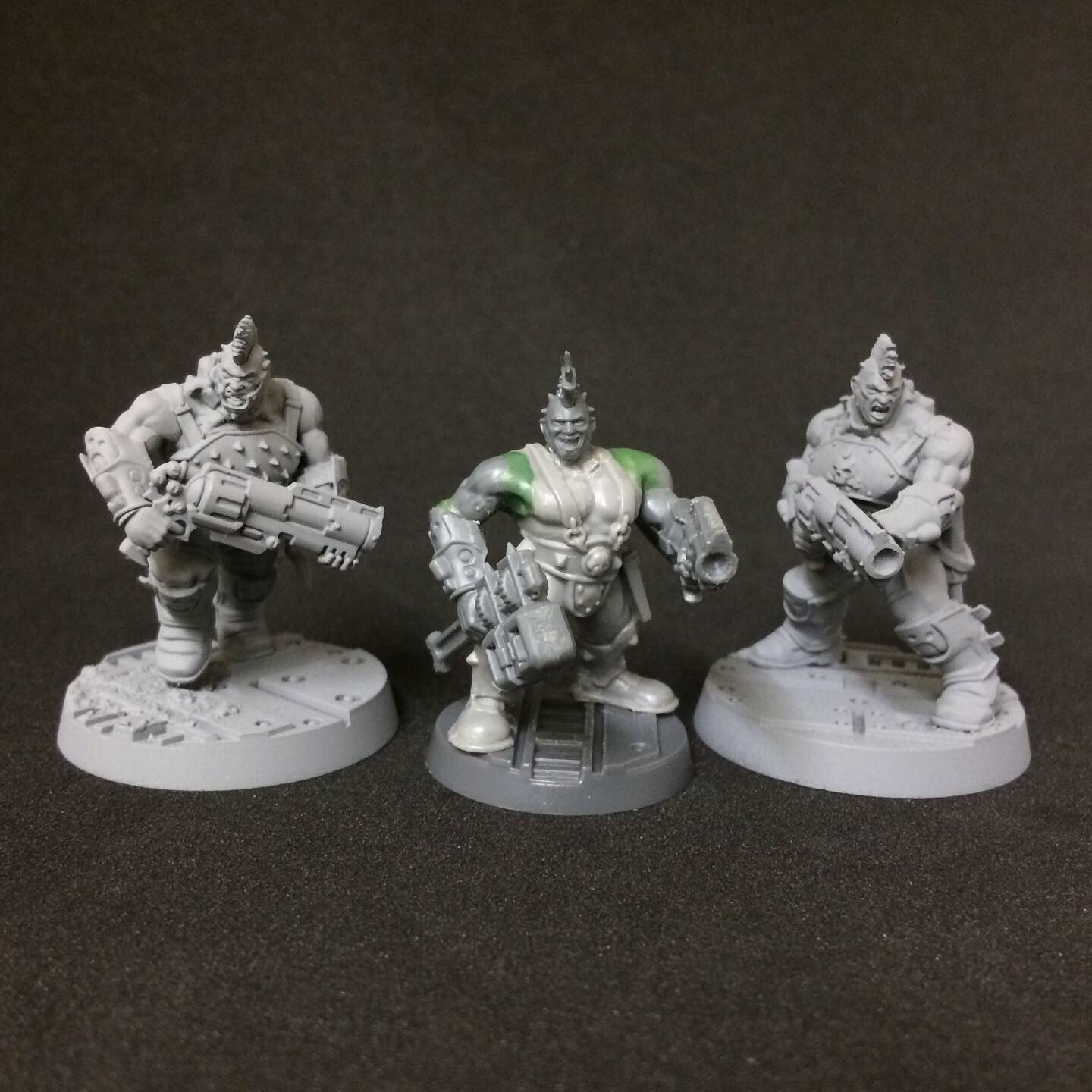 WIP of a Juve
He'd also like to point out that he's still working on his back, but he's proud of it so far. 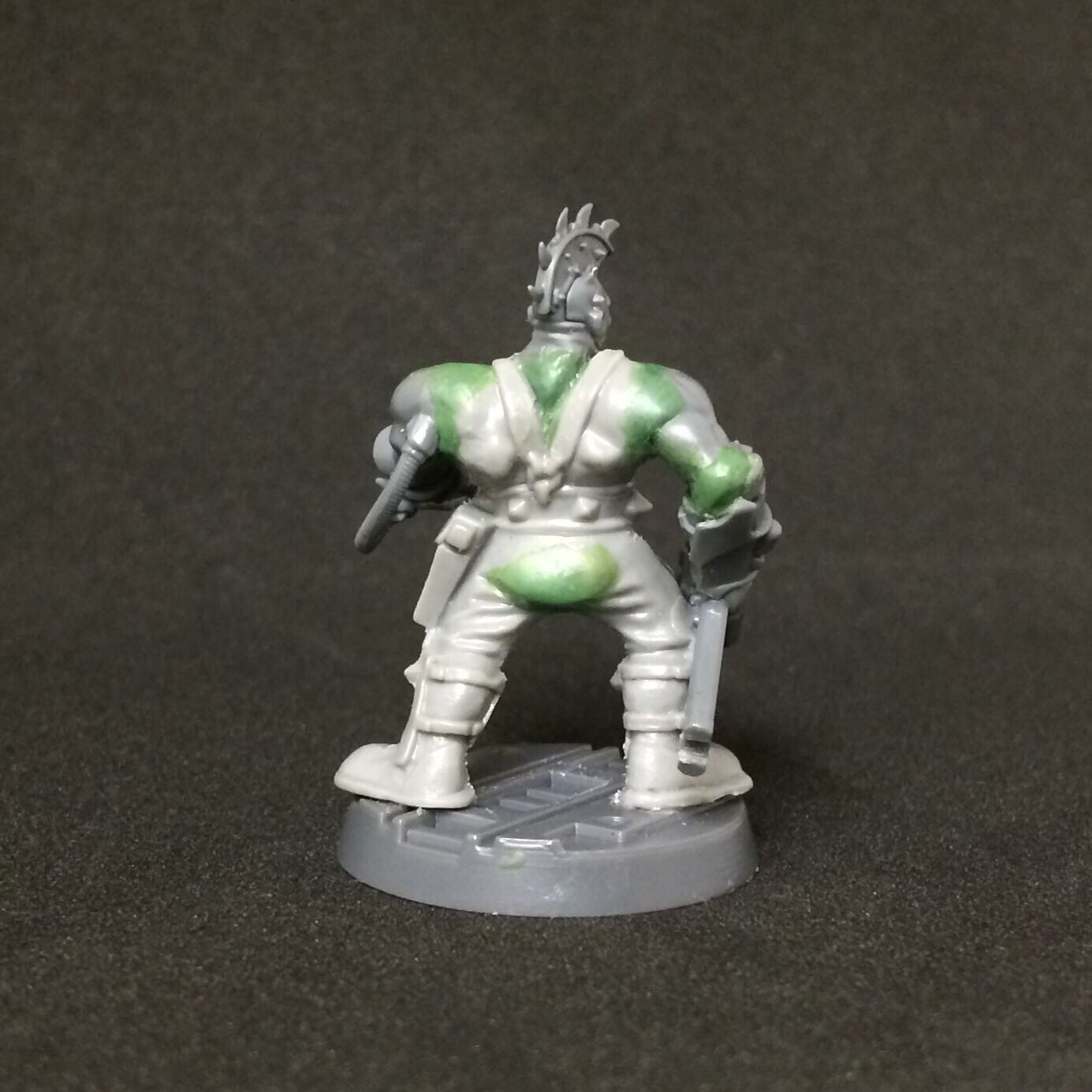 One day he'd like to join the gang and be all shiny and technicolor. For now though he'll continue WIP.

Shortstack is a lot of fun. The left arm seems to have a bit bigger trap than the right.
Reactions: trollmeat

The peril of stimming...

Which bit? Shoulder? Bicep? I'm waiting for green stuff to cure to avoid the dreaded fingerprint of ruination then I can tackle him again another day. The arms themselves are a bit freakish as the new scale is taller, so there was a bit of careful reposing on the two-part spudjacker one to avoid Gorilla arm as much as possible. The other is stock Stubgun so far, though it is let into the shoulder a bit.

I'll certainly look at a him with fresh eyes another day, he was a lot of fun to slap together and I think I'll have fun using him on the tabletop... IF I ever get him painted!
Reactions: trollmeat and spafe

Left trapezius, maybe cut it in to match the right trap a little more and also, cut the cable from the tricep and move it more right about 1-2mm, that would disguise the difference a bit too. Hope that helps.
Reactions: trollmeat and MusingWarboss
D

I wouldn't worry too much about it - all Goliaths are misshapen mutant freaks! (those old plastic ones especially.) @djmothra speculated that they may be part Ambull
Reactions: trollmeat, MusingWarboss and spafe
B

Nice to see the 'classic' models given a new lease of life.
Reactions: MusingWarboss

Ah, I get you. Yes, that area needs some sanding and work. I added more Greenstuff the other day as it was a bit low. That was his previous knife arm.
Reactions: trollmeat

Yeah. The originals really are knuckle draggers for sure.