I was itching for some good, old Necromunda tabletop mayhem after completing both halves of my new desert board, scatter terrain and five of my mercs. As the other factions were still languishing in their sprues I needed to come up with a scenario including some sort of critters. As a Borderlands fan Skags came immediately to mind. Because of the fact that I have only five Skags (aka WHFB Chaos Hounds) painted I needed to fill the gaps with other creatures. Looking into my glass cabinet the WHFB Night Goblin Squigs literally sprang into view.

Good, with all the models on board a reason for the scenario was badly needed. Again I was reminded of the Borderlands game how those Skags spawn onto the map via dens. Mulling over this fact it would make sense that the mercs needed to collapse the dens in order to restrict the amount of chaos inflicted from roaming packs of critters.

And now to the stats of the models. The mercs would adhere to the stats of the Palanite Enforcers with a few exceptions. The Leader model would switch WS stat with BS stat to show his military background and the specialist would have also access to Savant skills. All mercs would be equipped with the following (according to WYSIWYG): Power armour (3+save and various buffs vs. environmental hazards and status effects which weren´t important for this scenario), bolt pistol, bolter, frag grenades and one additional ammo pouch for each bolt weapon (i don´t like the N17 reload rules). The specialist in the team exchanged the frag grenades and ammo pouches (not modeled on him) for his wrist-mounted personal computer ("WMPC"). This gadget allows him to perform suitable actions in all following scenarios. In this one he can perform a double action in order to scan the board which allows him to identify (reveal) a blip.

The critters on the other hands have the same stats as their WHFB (edition around 2000) counterparts with a few exceptions: Gnashers (aka Squigs) have move 5´´ and "mental" stats of 9+ and Skags (aka Wolves from O&G) move 7´´ and have mental stats of 9+.


Scenario:
Fire in the Hole


Winning condition:
The mercs need to destroy at least more than half of the dens to be the victor. If they destroy 2/3 of all the dens it is a major victory and should they even destroy all dens it is a massacre. However should all participating mercs suffer an out of action result then the scenario is turned into a shameful defeat regardless of how many dens have been destroyed in the process.

Losing conditions:
The mercs destroy less than 1/2 of the dens which makes them the loser of the scenario. If they only destroy a 1/3 of the dens it´s a major defeat and if they don´t destroy a single den it´s regarded as a shameful defeat.


Placing the critters:
No critter is placed on the board at the beginning. After a merc activation ends critters may spawn randomly according to the following rules:

1. Check if there are four or less critter models on the board. If this is the case then a blip may be placed on the board. An unidentified blip itself counts as a single critter. Otherwise you may not place any blips at all. Spawning of critters via a blip occurs after all critters or unidentified blips have been activated.
2. Placing a blip: Roll a D6: 1-3: Northern half and 4-6 Southern half. Roll again a D6 to randomly determine from which den a blip emerges.
3. Blips spawning from a den can´t do any other actions than to be placed in contact to glass token from the originating scatter terrain. Should a merc has LOS to the blip then it is immediately revealed. Critters always look STRAIGHT AHEAD (important for doing charges later on in the game) when emerging from a den.
4. Unidentified blips may only do a single move action (5´´) in a turn. They MUST move towards the nearest merc as close as possible using the shortest route. If they enter his LOS they automatically reveal and stop their activation.
5. Blips were taken from the Space Hulk board game (around 2010). Blips which feature three creatures were removed from the pile at the start of the game.


Sequence of play:
The mercs start the game. Then alternate activations occur. At the start of all following turns the mercs AUTOMATICALLY win initiative representing their superior tactical skill as opposed to crude animal cunning.


Special scenario rules:
Desert Storm: All visibility is reduced to 12´´. This ensures that the mercs must put themselves in harms way in order to combat the critters.
Fistful of Dynamite: All models attacking a den with frag grenades NEVER need to check, if they run out of frag grenade ammo. This represents the fact that they come prepared to this scenario. However frag grenade attacks targeted at critters STILL FORCE the merc player to check for ammo as the mercs are not supposed to waste explosives on roaming critters but to save them for blowing up the dens.
Fire in the Hole: A den can only be destroyed by a weapon with the BLAST trait.
Home, SWEET HOME: Fleeing critters may only leave the board via corresponding dens (i. e.: a Gnasher may not enter a Skag den).
Merc Specialist (WMPC): Scanning for Lifeforms (Double Action). Can´t be chosen as an action while seriously injured, engaged or fleeing. Must reveal a single blip of his choosing anywhere on the board.

Declaring Charges [House Rule]: The target of a model´s Charge action must be in it´s LOS at the beginning of it´s activation.


Scenario Background:
A small group of ten mercs has been hired by a mad scientist to guard his underground laboratory complex in the middle of the desert. Despite collecting generous wages from this endeavour the Leader of the group (Lieutenant aka Lt.) has decided to earn even more bucks while also trying to gain the reputation of supervising a dangerous and capable group of hired guns. Therefore he has decided to regularly contact the indigenous population outside the safe confines of the lab complex, if some kind of work needs to be done. A local town official told him that his people were routinely plagued by ravenous packs of critters living in the same sector where also the lab complex is located.
However he can´t shirk his duties while "moonlighting" and so a skeleton crew of mercs (half of the gang or rather the unpainted ones; LOL!) always has to stay at the lab cleaning guns and polishing boots. 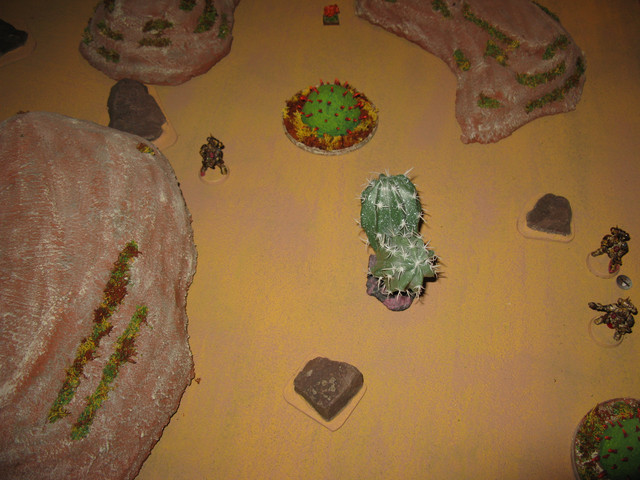 
Issues with pic hosting site:
Pics are queued in sequence in which they were uploaded. Sometimes a pic is uploaded faster than the previous pic, if it is comprised of fewer data. This means the order of the pics might be sometimes a bit off. If in doubt take a look at the pic name as the sequence of play can be followed there.


Gaming mistakes:
In one turn a pinned Skag panicked because of a wounded mate which is not possible. Despite this error everything else should have been played as the rules intended.
Last edited: May 4, 2022
Reactions: breegull
Show hidden low quality content
You must log in or register to reply here.