I started today work on my Ash Waste board. Although I will deviate from the lore and give it a generic desert theme so that I could also use it perhaps in the future for 40K or even Gaslands. This reminds me of the fact that I still need the rulebook for it. LOL!

Here is the link to the project:
https://ibb.co/album/PvBj3k

Apart from this I will take measures to differentiate all models which I will use for this game from my existing model collection. How so? Well, I am a fan of the Dark Sun setting which was heavily influenced by the artist Brom. He used for his art a limited colour palette. This means all kinds of brown, yellow and red will be used. What gangs/factions can you expect to see from me? Well, I haven´t started on any of my purchased N17 Necromunda models yet (oh, how shameful!) so everyone can profit from the Brom colour style:


As a Borderlands fan I also got an idea for a NPC cult (still have twenty chaos cultists models with basic weapons of the Dark Vengeance style unpainted in my drawer). Borderlands 2 had a quest which featured zealous bandits worshipping the Fire Hawk (Lilith). A few years ago I bought a giant scorpion from a toy line as a Kaiju for my Imperial Knight Mecha game. The scorpion has a fiery, magma theme going like those crystal creatures from Borderlands or even Age of Wonders Planetfall. This gigantic arthropod could really well function as a living deity like the ratskins which worshipped a giant spider in the Redeemer comic. I will post a pic of it tomorrow. So an advanced scenario could be that a gang needs to kill it just like in the comic.

And there will be another faction in my setting which also had been inspired by the Borderlands franchise:
Corporate Mercenaries aka Crimson Lance. Models used for these dudes will be the only Primaris models which I liked and bought: The Infiltrators. I will model them with the closed helmet option and give them a dark, red colour scheme. Still undecided about the insignia though. How about a dark sun? LOL!


Also being true to Borderlands I have some critters at my disposal for a nice scenario such as "Critter Hunt" or a special scenario rule which says that critters randomly enter the table to create havoc during gang fights:
- Squigs (from WHFB, also already red, Hi!Hi!)
- Chaos Hounds (from WHFB)
Still need a flying variety. Have to look how many flying critters I could get in the Dark Eldar beastmaster box.


Emphasis on this project will be on single-player experience and influenced by Borderlands. So there will be scenarios on foot and on vehicles or even a mix which I guess will also take place in the vanilla setting of the Ash Wastes as GW intended when they gave us the preview of the models on foot.

That´s all for now.
Reactions: Grognard Gluefingers, MusingWarboss and Greenthumb

Deviate from the lore as much as you like. My hive has a batman, judge dredd a leprechaun and is over run by squigs just to name a few non gw canon things that go on in my hive

I watch this project with interest

Greenthumb said:
Deviate from the lore as much as you like. My hive has a batman, judge dredd a leprechaun and is over run by squigs just to name a few non gw canon things that go on in my hive

I watch this project with interest

I have Ash from the Evil Dead, The Toxic Avenger, Pinhead and Frank Sidebottom running around my part of the Underhive.
Reactions: Grognard Gluefingers

Today I put another sand layer on the board but didn´t take a pic as it would look just like the first. Also started to assemble a few minis of my Corporate Mercs.

When the process began I got a visit from the Gremlins. You don´t know who they are? Mischievous, little, invisible fey creatures who delight into rearranging my stuff from time to time so that I have to waste energy to find it. So I started to remove the first item from the plastic sprue which was a leg and because of the tension it bounded away like Sonic the Hedgehog on Speed. First it hit my chest, rebounded to the table and slithered a few centimeters along it and f***ing disappeared before my very eyes. Vanished like Puff the magic dragon! I immediately stood up, cursed and looked under the table for the rotten thing. But nothing! NOTHING!

Then I had to search the room for christ´s sake! Looked under the couch, chair, second desk, again on the floor while shouting obscenities. I swore if I didn´t find the blasted leg then ALL the other items on the sprues would hit the dumpster today! Damn was I annoyed! In the meantime I had put all four sprues aside to get a better view at my painting table. When I picked ´em up again the missing leg FELL to the ground because it was LODGED BETWEEN THE SPRUES! Effing Gremlins!

After that horrible encounter with unnatural forces I snapped pics of a giant scorpion and a giant spider which will suit as critters. 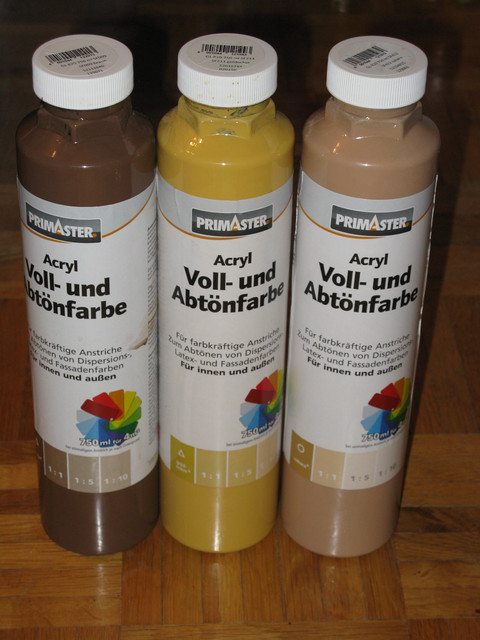 Started work on the second board. Poured sand on wood glue. Also drybrushed first board with Bubonic Brown but I was way too cautious with the amount of paint so that it still appears to be dark brown. Need to apply much more. Last but not least I was too lazy to work on the Mercs today. Will do better tomorrow.

Finished the two board halves but they were too dark. Should have done a test prior on working on them with a base. -Facepalm- Had to coat both halves with bubonic brown (tinting colour). Will drybrush them tomorrow with Graveyard Earth (tinting colour) and hope this will be closer to a sand board.

Also collected stones for scatter terrain. Already glued them on a base and poured sand on them. Base just needs proper colour like the desert board.

Slave to Darkness said:
I have Ash from the Evil Dead, The Toxic Avenger, Pinhead and Frank Sidebottom running around my part of the Underhive.
Click to expand...

I have a Dalek and a Sea Devil!
Reactions: Slave to Darkness
S

I see no problem with the deviation. You can lay it out and design it however you want.

Even if from space and around hives it appears that all of Necromunda is covered in Ash Waste, it will not be the same everywhere. Ash alone has colors from black to gray to white and we know so many different sand, rock and earth colors that almost anything is actually possible. Then there is environmental exposure and corrosion and the decomposing and ground to dust garbage and waste from millennia.

Certainly there will also be some valleys and areas that are not reached by ash storms and in which they have not covered everything and ground it to dust. Or the ground is so exposed to the storms that the bare subsoil comes to light.

The important thing is always the story and a suitable background and then you can do almost anything.
Last edited: Apr 13, 2022
Reactions: Slave to Darkness and MedMos

And the Necromunda fluff from years past suggest the ash wastes contained a shocking array of colors that to pollution. There’s no reason there couldn’t be a “painted desert” that looks like a bad acid trip come to life.
Reactions: Ben_S

Finished at last! I quickly assembled some scenery on the boards for a couple of nice pics for my future desert campaign. All of the cacti shown were previously used as "stinger cacti" from a Jungle Death World. And my overgrown, green ruins look really out of place on a desert board. Lol! I really need in a few weeks cheap mud habitats built from styrofoam which would be more fitting.

Another aspect I would like to do are sectors with a catchy name and a theme. Akin to locations in the Borderlands video game. For this endeavour I still have the Planetary Empires set with hexagonal tiles from 40K. Most of them are painted in a jungle theme but I still have some spares and all of them have TWO sides. That´s perfect to create a map located in another climate zone.

For my recent setup I have collected about twenty stones of which only twelve have been put onto bases. So the board will be dominated by loose scatter terrain as shown in my album and thus I will call this sector Sea of Rocks. This means when gangs later revisit the sector I already know how it is supposed to look like.

For the next days I hope to quickly finish my five Corporate Mercs. Then I will create a scenario in which they wander the Sea of Rocks because of some reason which hasn´t been determined yet. While they do this minor critters will ambush them because all participating minis will be the only ones battle ready for action as the N17 stuff still languishes in sprues. Lol!

Finished my first Corp Merc model today. I will paint the camouflage pattern for these guys individually because otherwise I won´t make fast progress. Painting a single dude took me quite some time.

Second merc has been finished. It´s the communication specialist with his Pip-Boy. Still unsure what kind of role he could fill in a sci-fi skirmish game. He could maybe have a "Hacker" skill. Funny note: Due to his positioning of his arms and direction of head he will be the only member without grenades as there is no space left on his chest. Lol!

Corp Merc #3 has been finished. All other mercs will be similar to this one as they will be equipped with bolter, bolt pistol and maybe grenades, if there is space left on the chest.

Finished #4 today but my eight batteries are all dead. So no pics.

Punktaku said:
And the Necromunda fluff from years past suggest the ash wastes contained a shocking array of colors that to pollution. There’s no reason there couldn’t be a “painted desert” that looks like a bad acid trip come to life.
Click to expand...

Sure though I want a more bright desert look.

Managed to take pics today of the fourth merc. Though haven´t started work on the fifth yet.

It´s been awhile since I last did something for my Necromunda/Ash Wastes project. I can proudly present today my first major terrain piece for my desert board. To illustrate the dimensions of this building I could enlist Mad Donna and an Ork Stompa (crazy duo!) to show it off. Enjoy! 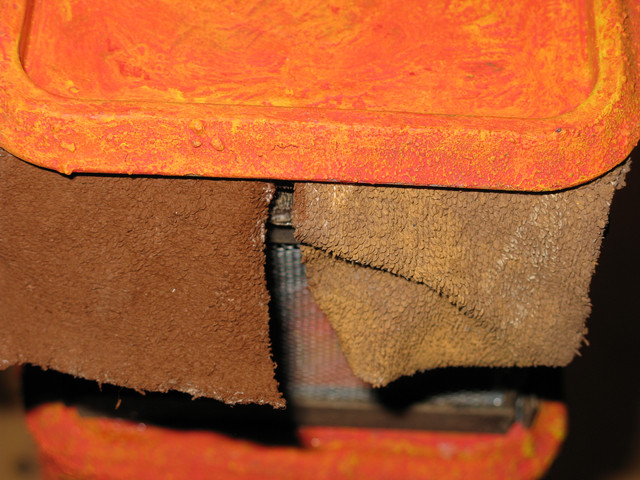 The "Red Tower" is made up of proper Ash Wastes material which means junk. LOL! It´s components are:

The base itself needed to be large to avoid toppling the tower easily during play. So as a foundation three large stones found outside were used to add considerable weight to the base. Unfortunately the base looked too barren with just three stones and as a consequence I had to rummage through my bitz boxes in order to clutter the base in good Borderlands fashion. Here are the additional components: