Don't think this is worth making another project log as this side project is actually already done with regards to building and painting the models and end of the month we plan to get some intro games in.

So some time ago someone asked If I was interested in the rulebook and cards and stuff that come with the latest killteam box (actually, the one before, with the Navy Boarding Team and Kroot, so not the latest I guess). I also found a hobbyist close by that wants to get into Kill Team so guess we'll get some games in soon. And that House Greim Attachée always looked like an old Rogue Trader to me anyways. So I was all in for a Rogue Trader counts as Elucidian Starstriders Kill Team.
Good thing this team has barely any moving parts, due to the original team being push-fit monopose models with no options. Good for casual player me. But I can equip some of them with carapace armour and hot shot las-packs. Pew-pew.

Once I figured out how to play this game I challenge thee, @NoOneII. Bubblegum wars in space!

May have to improve my impromptu photo setup as I think the models look much better IRL, seeing the pictures on a big screen I touched up some minor things already, but here we are.


Proud as a sumpkroc mother. 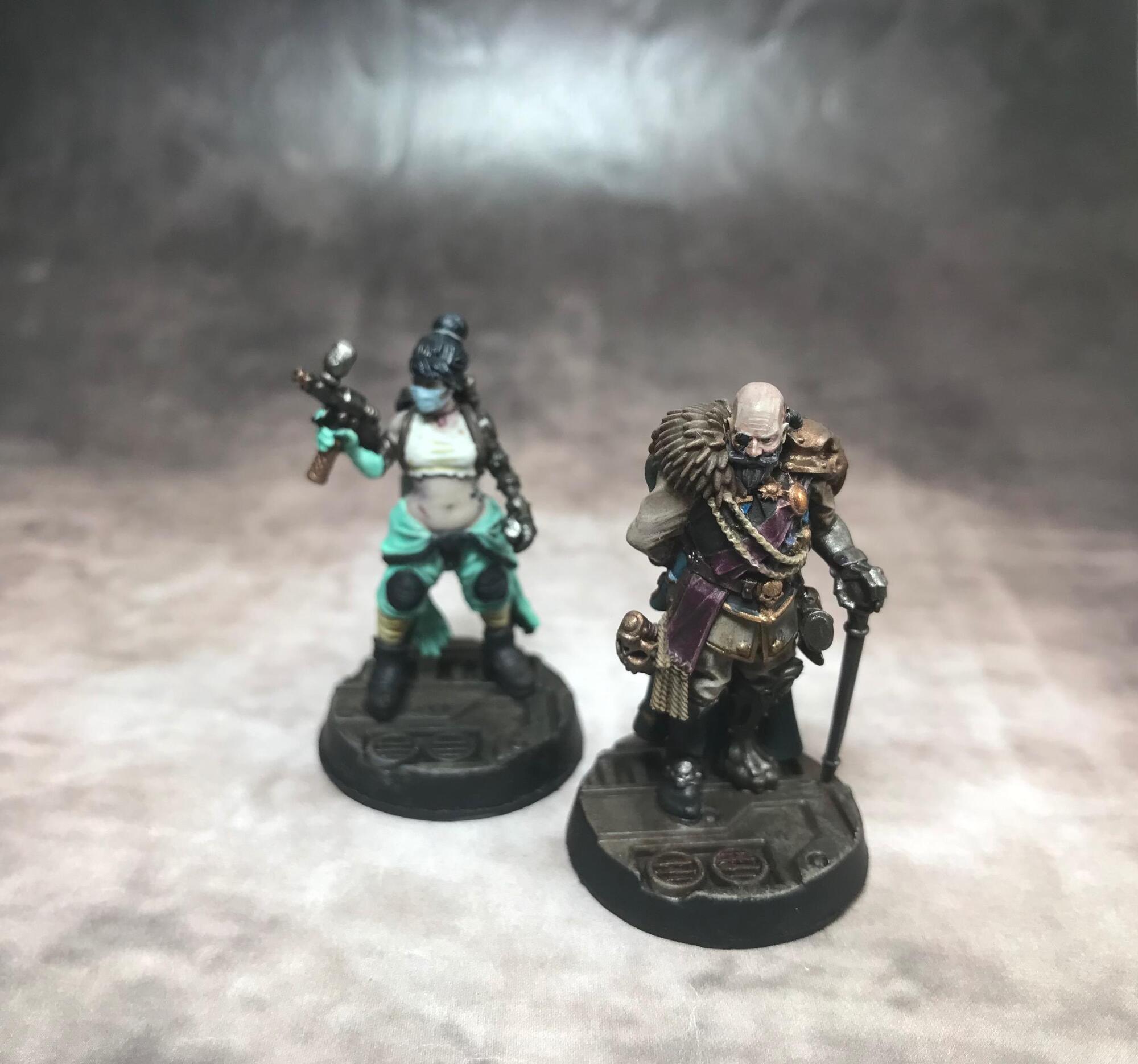 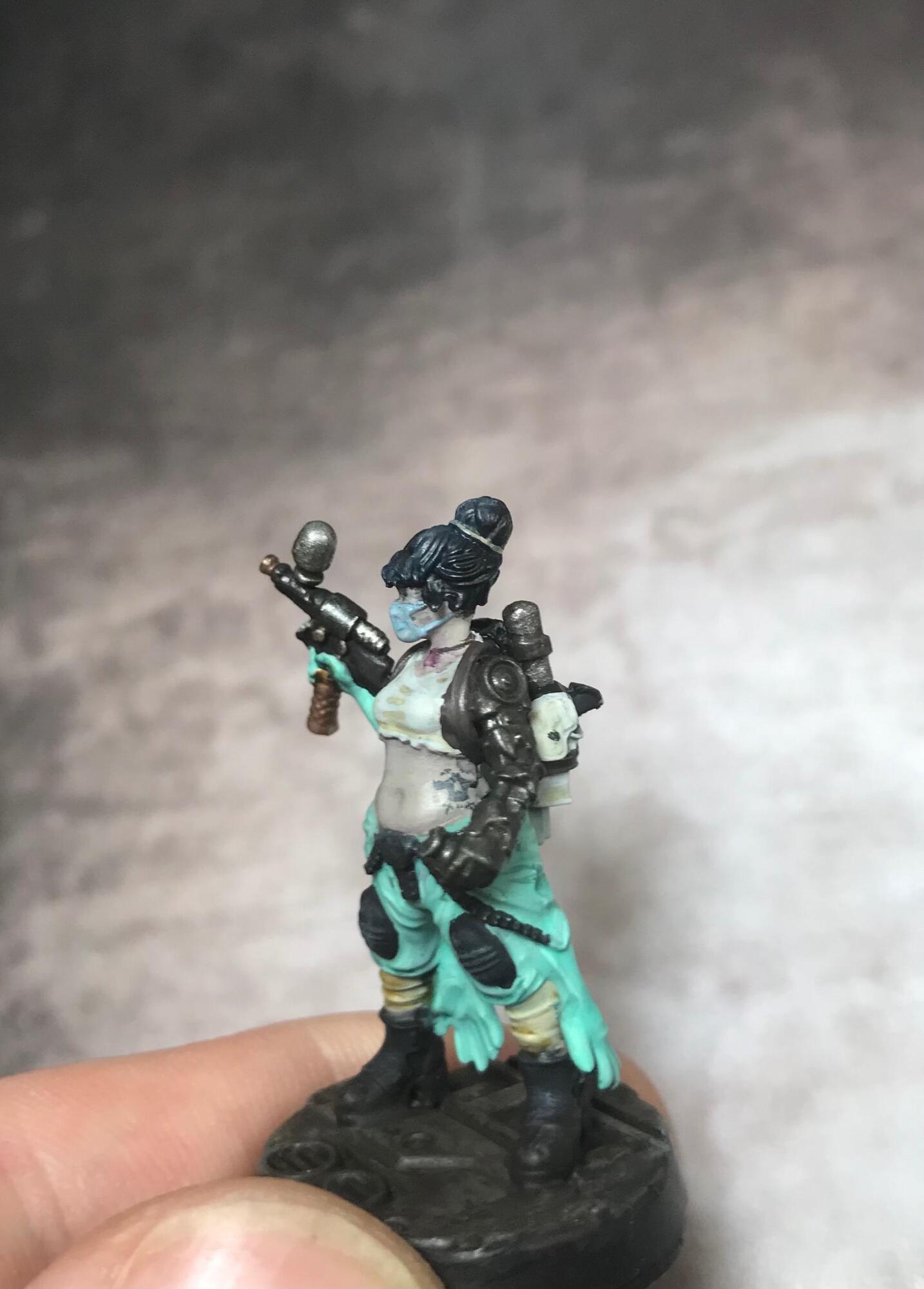 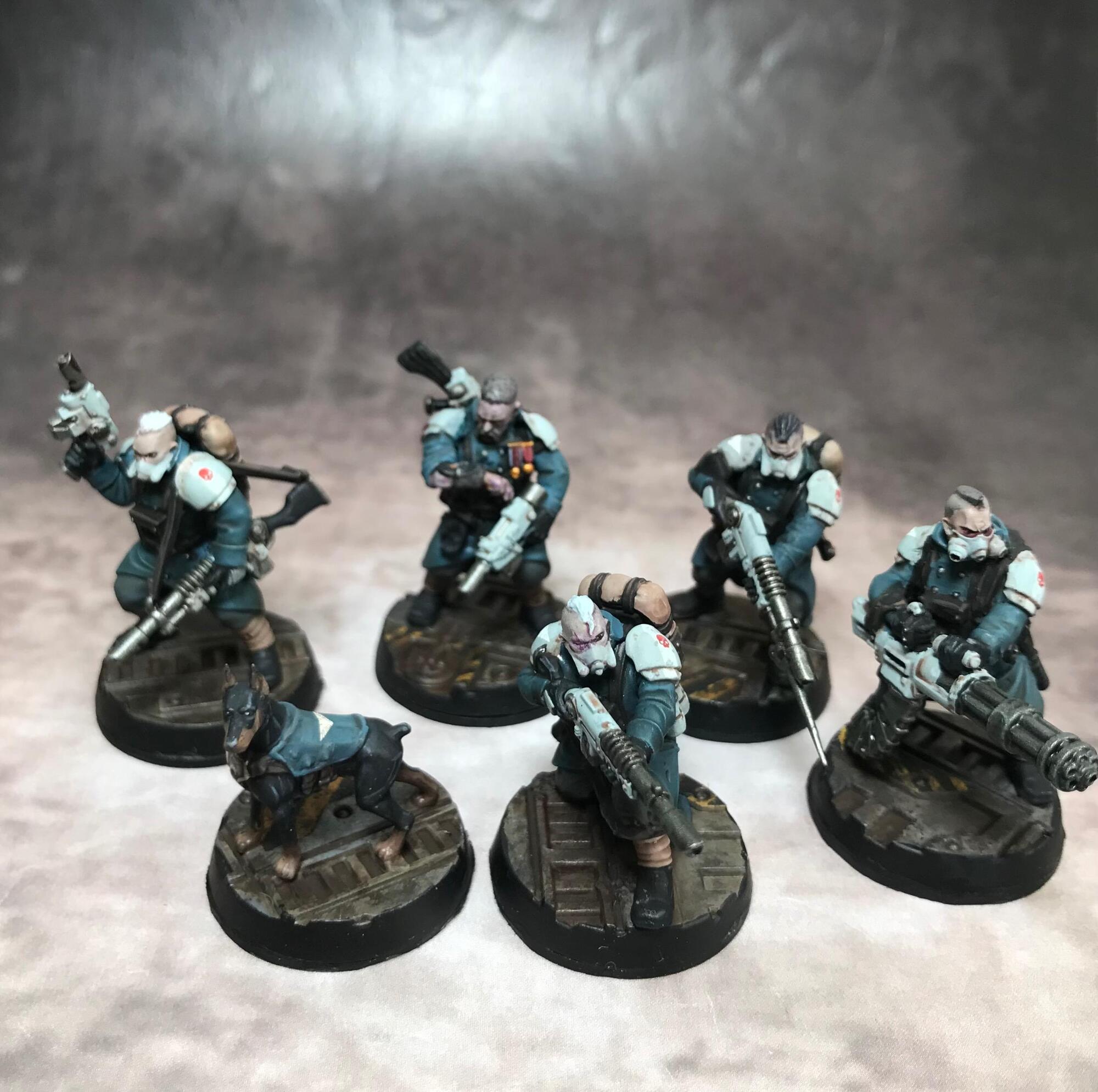 Lec...Laec... Meester... whatever that guy is. The Mechanicus Cult Engineer Guy. Silly model. But why not make an equally silly model?
Meet Navigator Haren van Eyck. Creepy mutant with big hat (or head?). 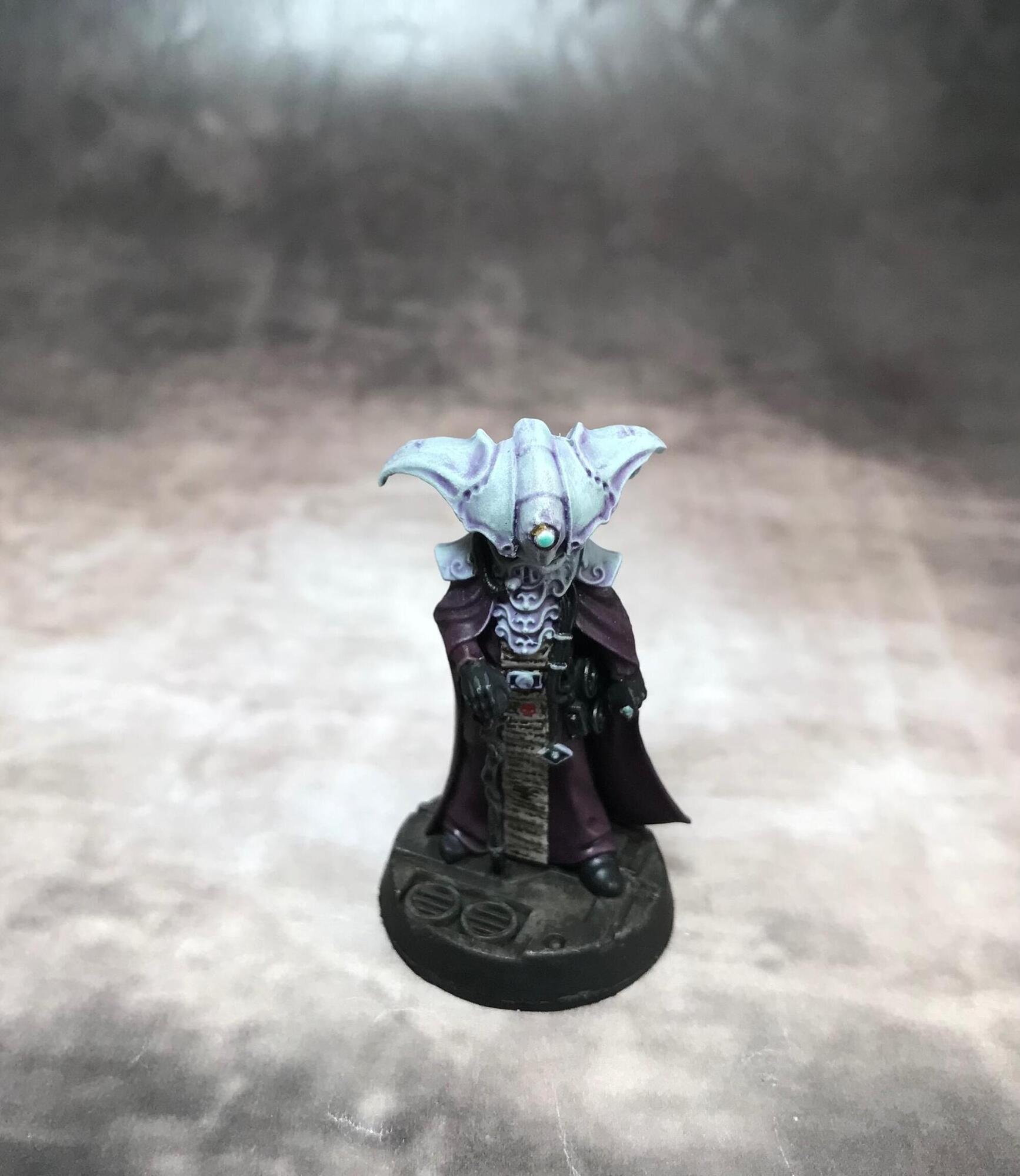 Deathcult Assassin a.k.a. The Null Maiden. May be an Aeldari Xenos lady, probably from a slaver's market, but no one dares to ask. 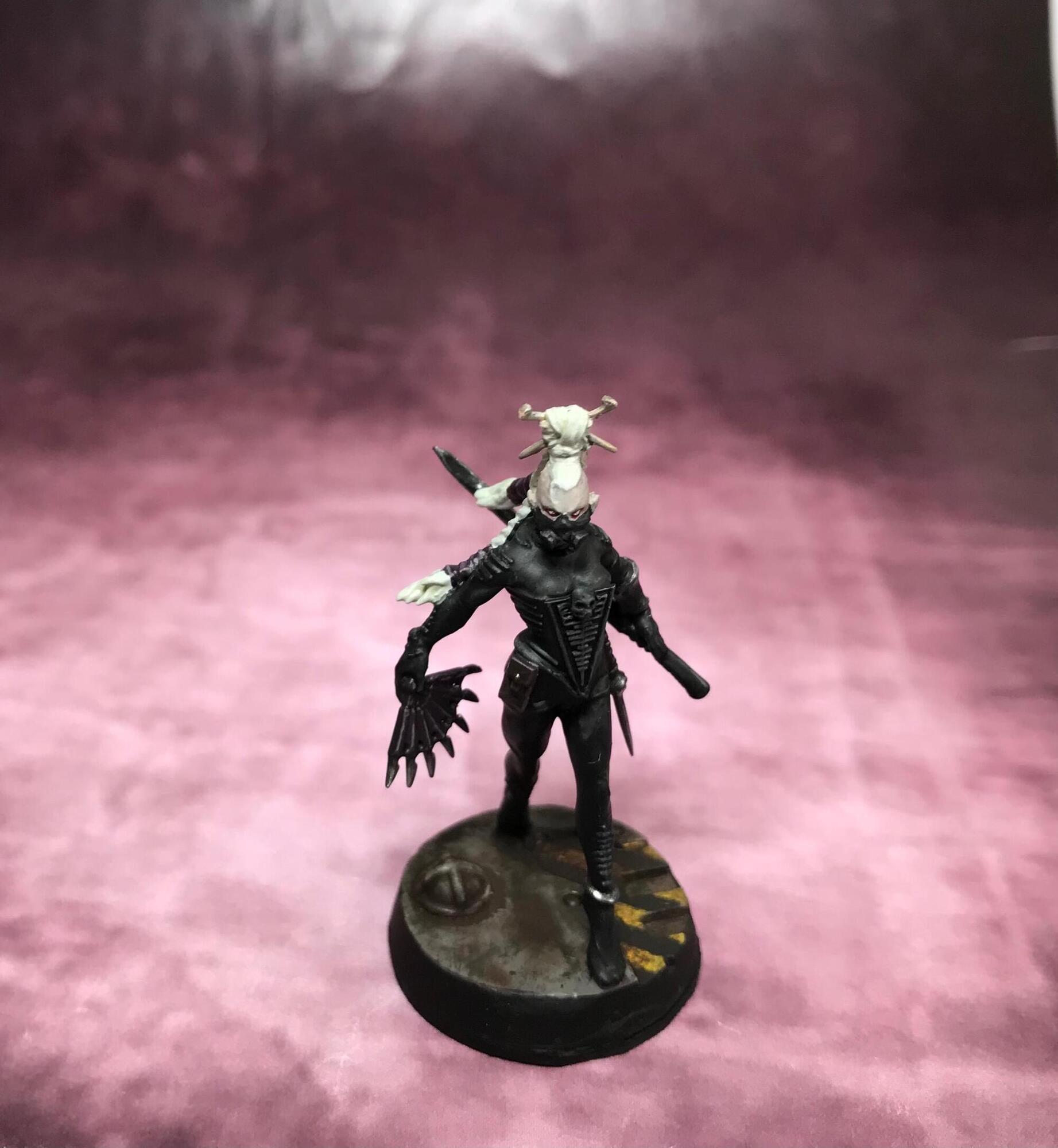 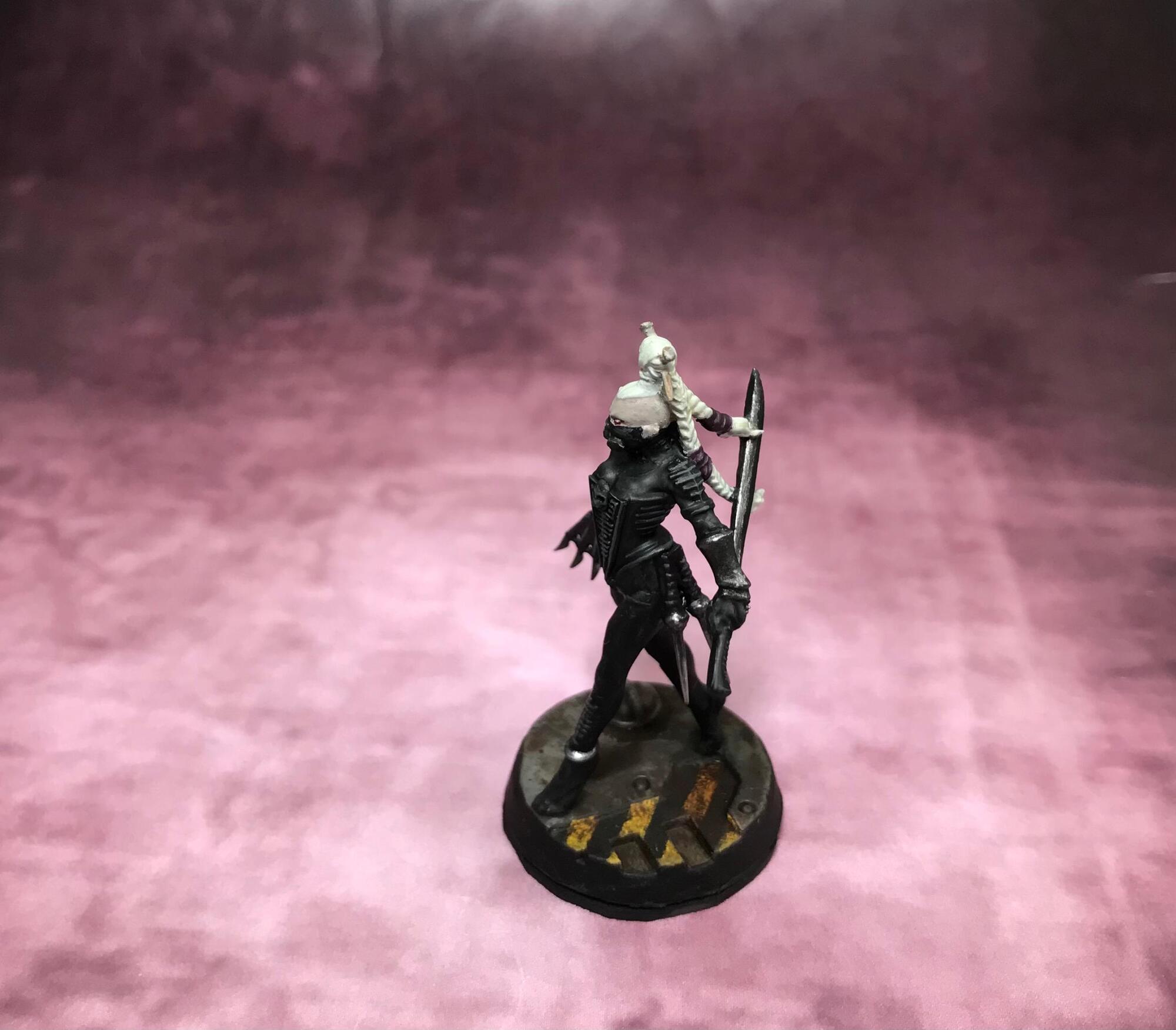 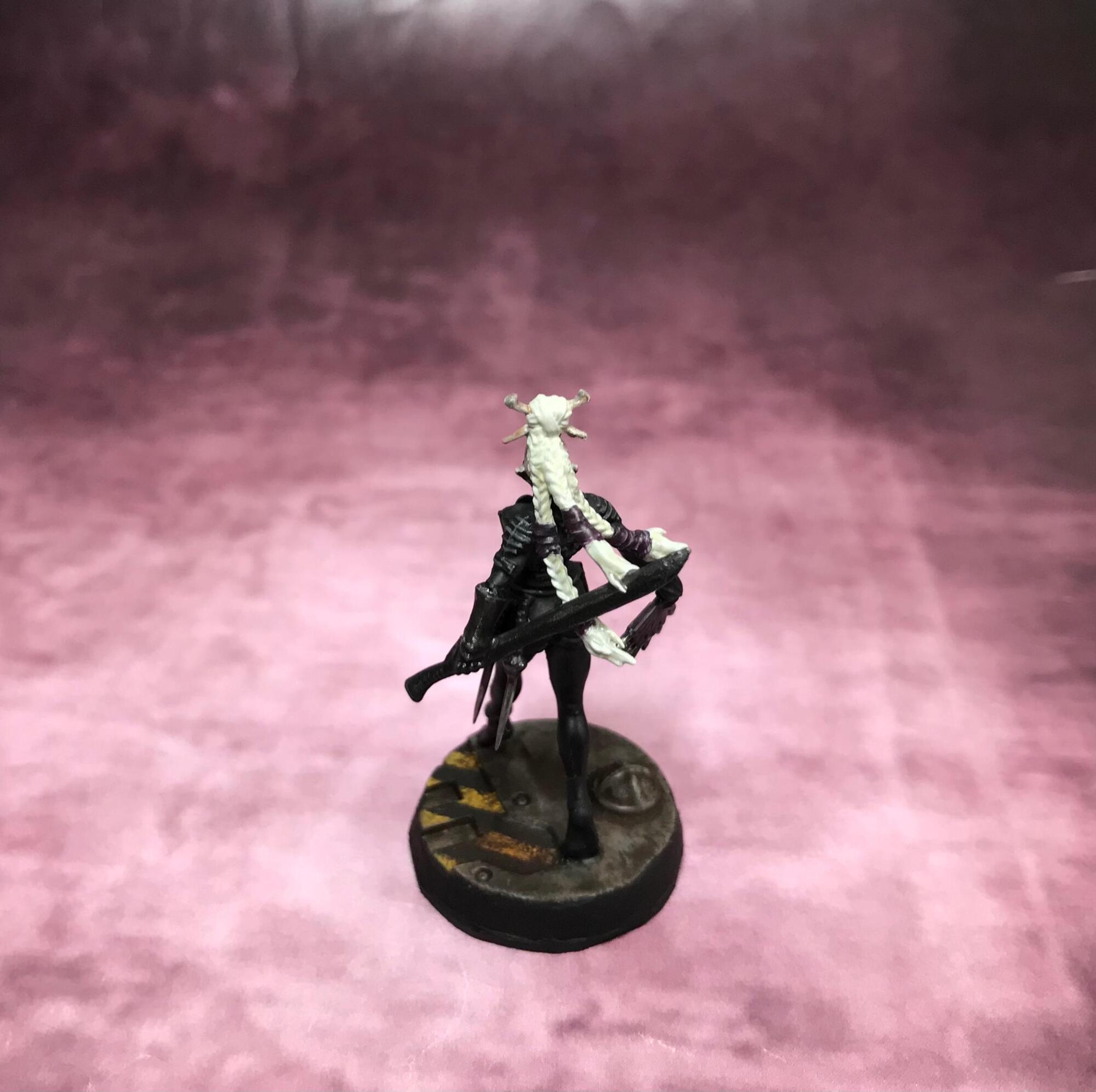 Tried new things with this project as well, mainly oil wash for the bases (Winsor&Newton oil paints thinned with odorless thinner) and hazard stripes with masking tape and then some stippling to make it look worn and torn. 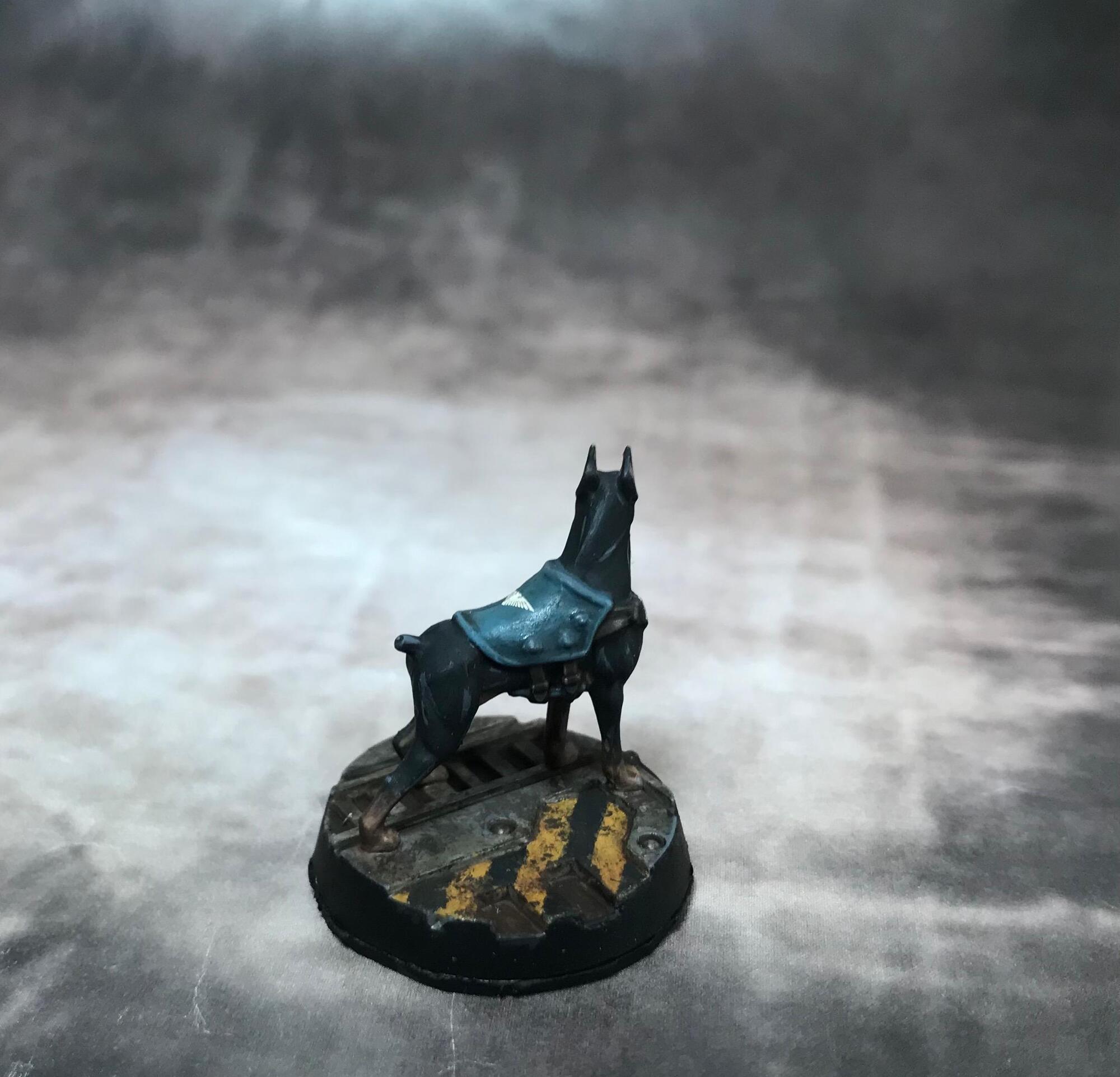 Want to add some hazard stripes and oil washes to my ZM tiles / board as well once I get round to doing so.

Because it still is spooky season there's an Underworlds Vampire warband on my desk that I been meaning to get painted for quite some time now.
But I'm sure I'll return to some Underhive goodness soon. I always do.
Last edited: Nov 2, 2022
Reactions: Halbling, Stefan von Kessel, Edster and 9 others

This may be related as well. Decided I probably won't need these Horrors for the Silver Tower so might as well put them on Underhive bases for use in Inquisitor. On of the characters I made is a Chaos-tainted Navigator after all. Navigator, Warp, Daemons. Yay! Painting these is so much fun. Repeat after me: SO. MUCH. FUN !

On another note:
Praise the cutest of the Dark Gods. Might as well be one of the Minions in disguise. Eh, Banana, Poquita? 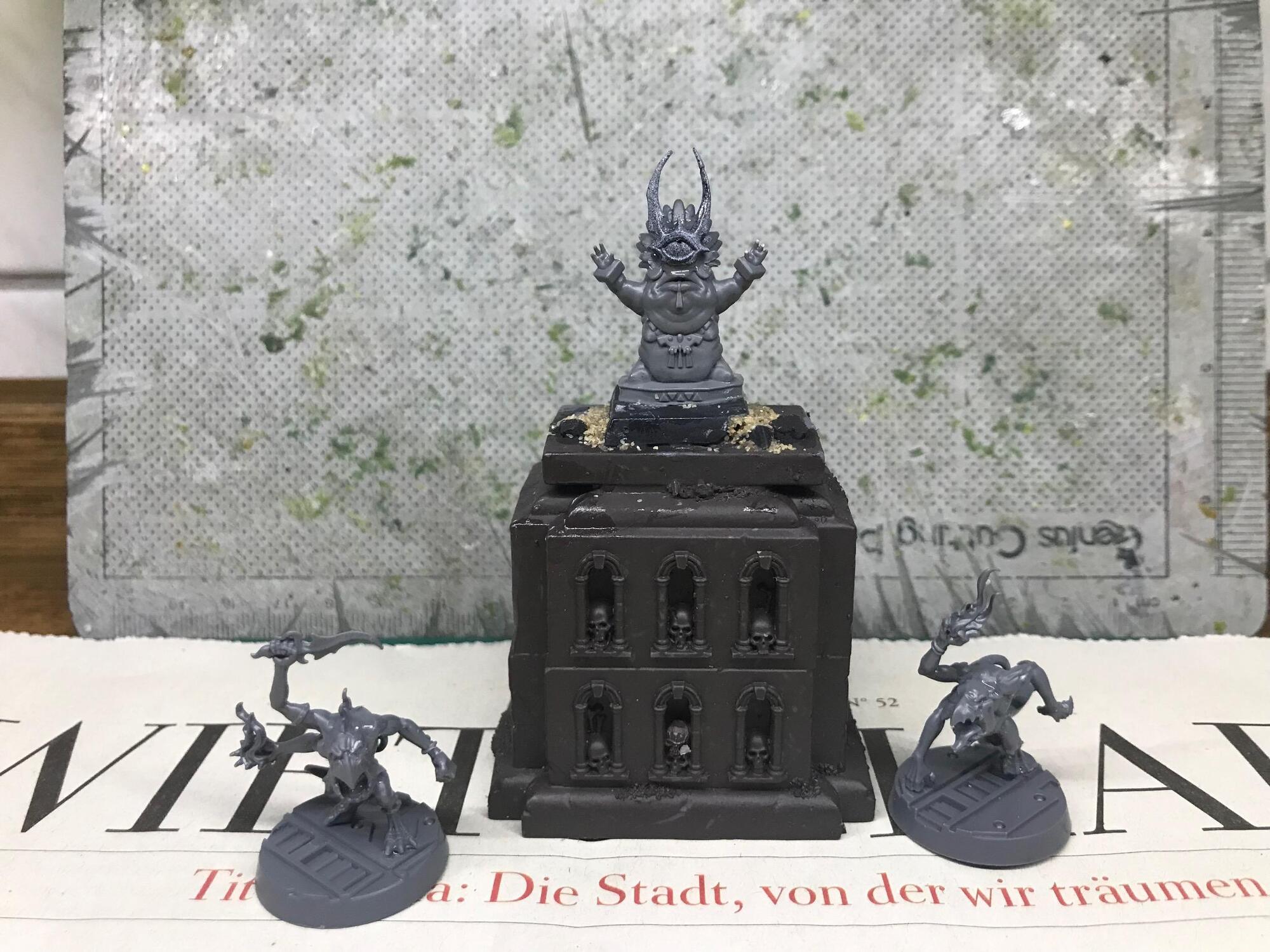 Is that a tiny Mazdamundi? Where on earth is that bit from?

Also: Now I kinda wanna know what city we are dreaming of.
Reactions: Sobek and trollmeat

SuboptimusPrime said:
Is that a tiny Mazdamundi? Where on earth is that bit from?
Click to expand...

Well now you definitely have to paint it yellow
Reactions: Sobek

SuboptimusPrime said:
Is that a tiny Mazdamundi? Where on earth is that bit from?

Also: Now I kinda wanna know what city we are dreaming of.
Click to expand...

That is correct. Got it off ebay. That dog chasing cars thing from the Batman movies. Had to have it only to have it sit in my box of bits for a long time.


trollmeat said:
Well now you definitely have to paint it yellow
Click to expand...

Will probably end up in my Warcry terrain collection so that would make it some kind of sandstone, at least the pedestal. We shall see.

Sandstone with some yellow paint smeared on it by the worshippers in times past?
Reactions: Sobek

Here's something I've been working on over the weekend as part of a monthly challenge with folks from my native German hobby forum.

The idea is to get classic Necromunda / Gorkamorka gangs painted in small steps over six months.

January was dedicated to painting two or more Juves.

Colour scheme is "everything everywhere all at once". 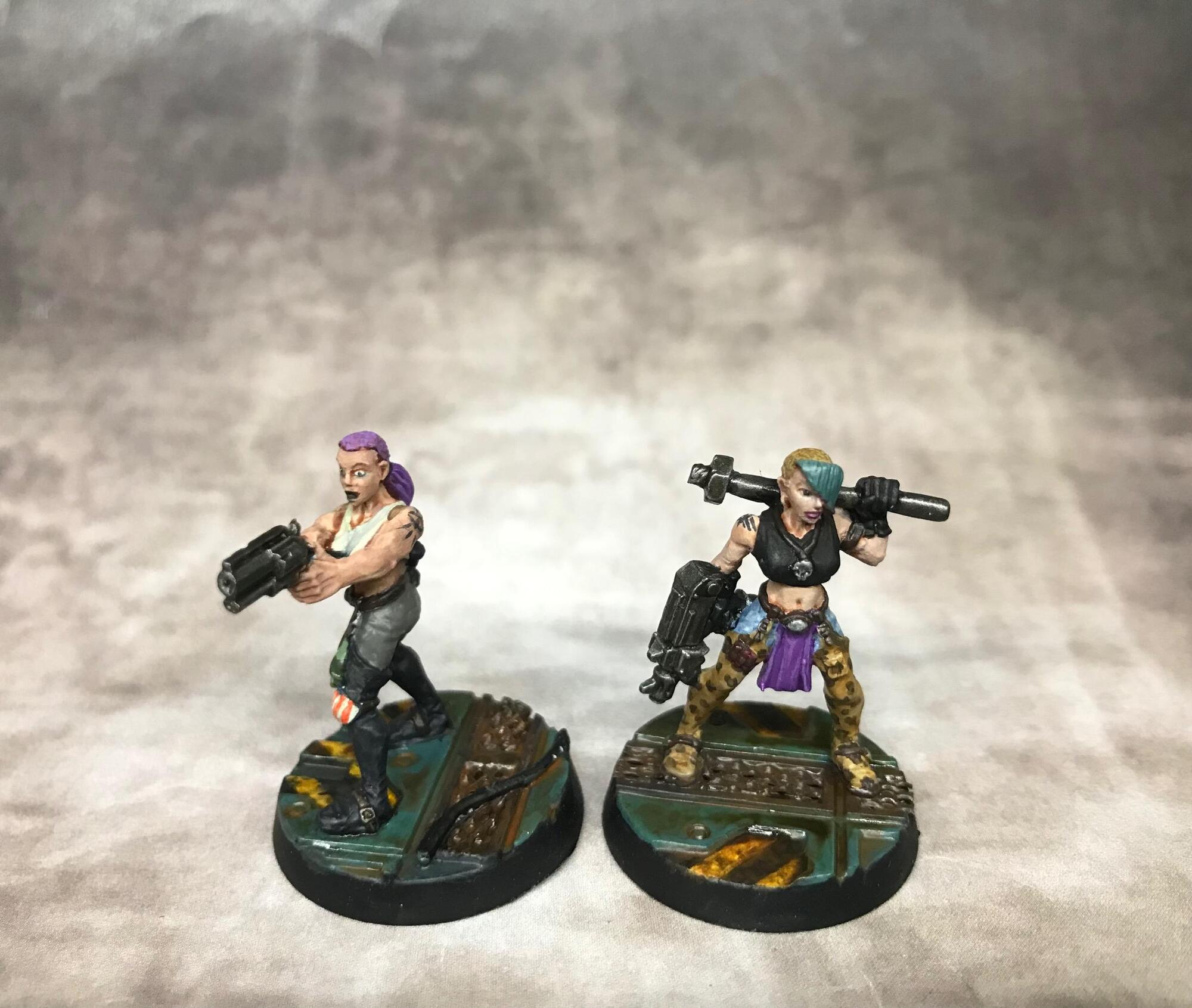 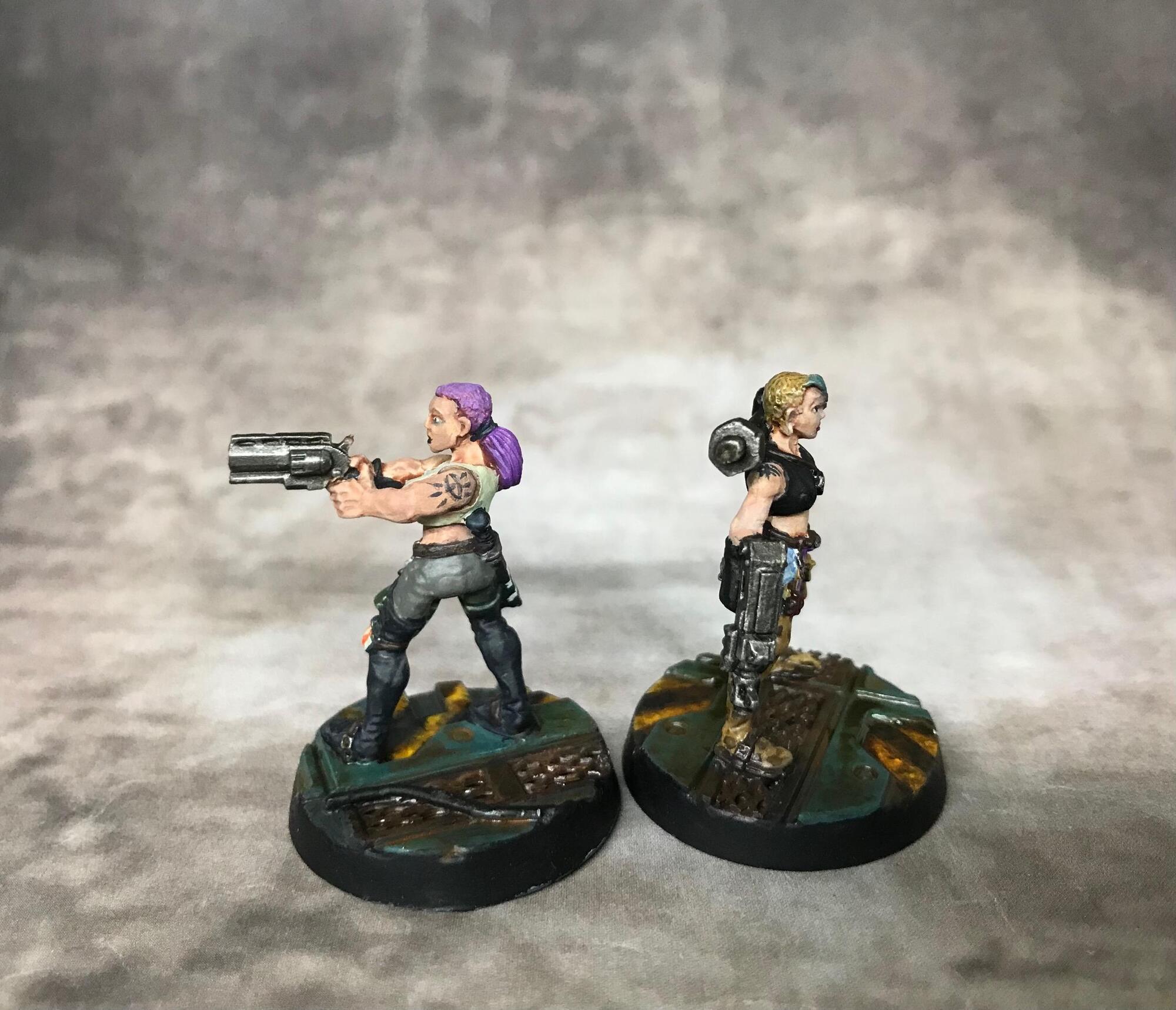 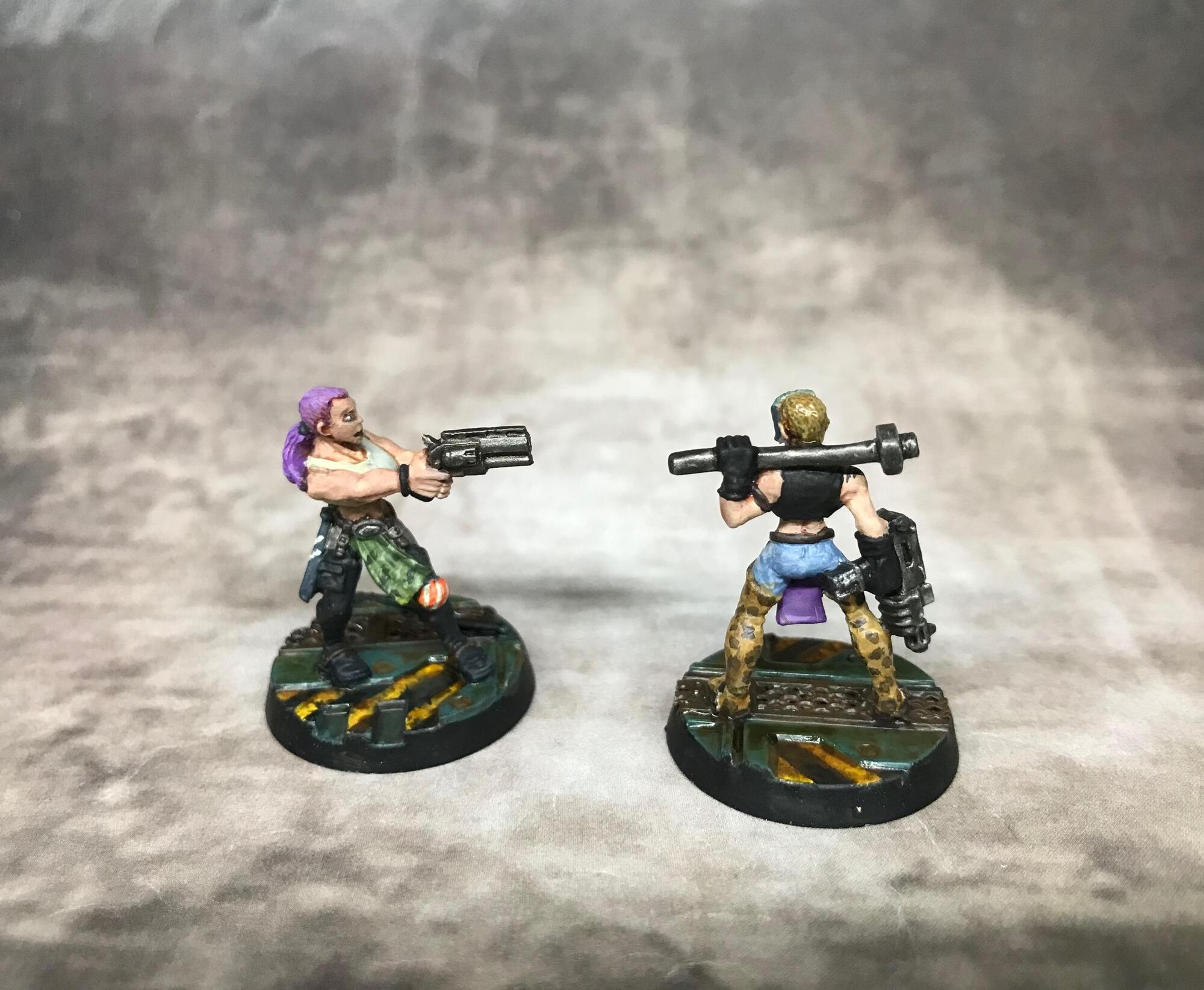 February will be (at least) one Heavy. I still don't like the Juve models all that much, but the Escher Plasma Heavy is one of my all time favourite Necromunda models!

Also based March's "paint two or more Gangers" models the other day; two Lasgun Ladies and a Laspistol / Flail gurl. 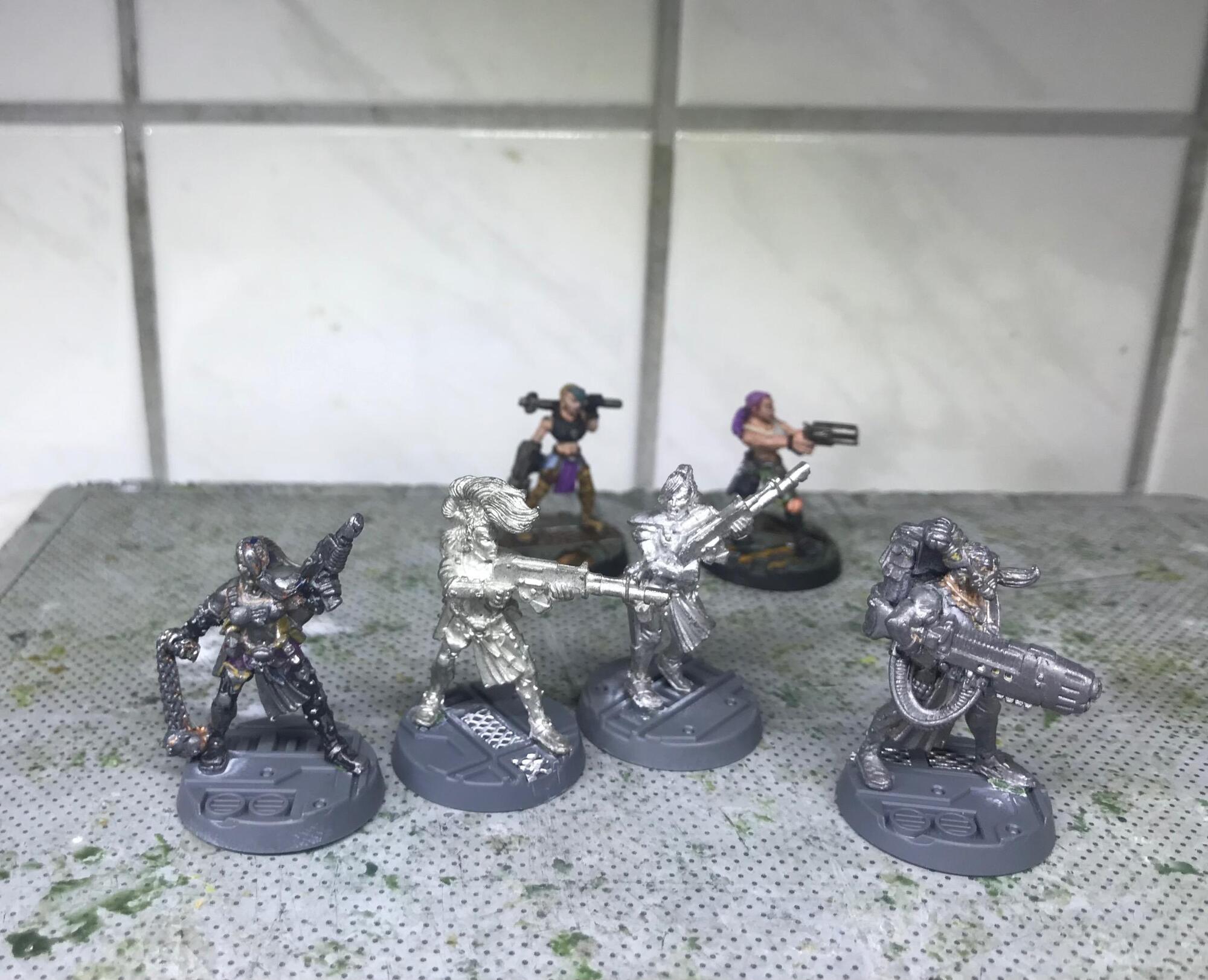 I'm through with Kill Team or Warcry or Underworlds thingies for the time being (until there's Warcry rules for the new Goblin Wolf Riders...) so might actually get back to painting my Underhive board. Or build some more Slaaneshii Pleasure Punks for our Inq28 campaign. Also there's a commission conversion project waiting.

Cheers.
Reactions: spafe, trollmeat, Ben_S and 4 others
Show hidden low quality content
You must log in or register to reply here.

Bits of War or TTCombat?