You are using an out of date browser. It may not display this or other websites correctly.
You should upgrade or use an alternative browser.
G

DerekDecker said:
Way to go double down on toxin weaponry for the best fighters, when goliath are virtually immune to them now.

And the new champs look really ugly. the needle gun look ugly and probably break off at some points.
Click to expand...

It's an ambitious take for Necro. Corpse guild tie in? Did anyone at all think Escher Re-Animator(1985) was going to be a thing? I feel like conversions will step in for the zombie ladies. The lightbulb fingertips aren't doing it for me. At least the veil's look better then the atrocity from Rogue Trader.
Reactions: Space Truckin

If nothing else, they will make great bits for other gangers and a base for what they are.
Reactions: Sackofmonkeys and cronevald

Grenville said:
It's an ambitious take for Necro. Corpse guild tie in? Did anyone at all think Escher Re-Animator(1985) was going to be a thing? I feel like conversions will step in for the zombie ladies. The lightbulb fingertips aren't doing it for me. At least the veil's look better then the atrocity from Rogue Trader.
Click to expand...

We are definitely seeing a pattern of awkwardly posed specialist champs and more appealing prospects, at least in my opinion.
Reactions: MusingWarboss, Hengwulf, Aulenback and 3 others
D

At least Goliath Stimmer look intimidating and come with a meme weapon. Better than...Jazz hands and water pistol as weapons, for the best fighters a gang can have.

Also doesn't look like the prospect come with any meme weapon like Forge born either. I was expecting something like Double barrel plasma pistol. But guess not, more toxin weapon!
Last edited: Mar 10, 2020

Yeah idk about the reanimated corpse women, the rest looks pretty good though. They are kind of interesting though in the sense they are a drab contrast to the rest of the house and would look distinct on tabletop. Nice to see some kind of exotic pets in plastic, overall it seems like a decent release.
Reactions: cronevald

DerekDecker said:
At least Goliath Stimmer look intimidating and come with a meme weapon. Better than...Jazz hands and water pistol as weapons, for the best fighters a gang can have.
Click to expand...

I'll agree that the Stimmers are better than the Death Maidens, but having built one now there's just something very off about it. He's got some OK angles but others that just seem awkward and wrong to me. I really don't want to bother with the running pose.

Death maidens are more Dark Eldar than the Dark Eldar. I thought someone had accidentally posted a picture from the wrong bit of the press release!

As for the others... Bows are unusual, don't think anyone saw that coming for Escher. I presume different kinds of arrow head such as gas, toxin, explosive etc. Doesn't really tie in with the Escher aesthetic though - the house which can easily buy needle rifles and pistols - arguably the most rare and expensive weapons in the Imperium - also relies on bows and arrows. Strange move.

The one holding up the leash is a waste of sprue. Such a dull and undynamic pose. Not helped by the continuing insistence on having models perched on bits of junk. I've never agreed with that - as they move round the table during a game I can't help but think of them picking up their bit of concrete or girder to carry with them so when they get where they want they can strike their pose again

I do like the prospects but I feel like there was a missed opportunity here. In my opinion Escher had the best sculpted and most iconic juves in the old ranges. It could have been nice to see a little callback to that with this release. I guess I can't complain too much as I still have and use all the old ones though.
Last edited: Mar 11, 2020
Reactions: Space Truckin and Aulenback

So, those are phelynx and not phyrr cats? Different name for the same thing? Specific species name? Something else entirely?
The one thing I'm certain is that they are not pretty.
They seem to have 2 different bodies and at least 3 different heads.

Wyld runners (Prospects?) are nicer sculpts and I kinda like the bow as a weapon. It continues the tradition of nu-Escher cannibalizing ratskins (or, more exactly, native-americans) for design cues (fur, feathers, and now primitive weapons... those gals look like Turok). They have two technically different but very similar poses (why?????).

I wonder why they went with a completely different paint scheme for Death maidens (Champions?)... I guess this may be one of the main reasons they seem so out-of-range. Apart from their head gear and claw weapon (more Toxin no doubt), they are not so different from stock Eschers.

Not terribly impressed by those gals but they are ok. If the phelynx are on the same sprue and eat valuable space that should have been devoted to more weapon options, I'm gonna be angry (I'll probably be angry).
Last edited: Mar 10, 2020
Reactions: MusingWarboss, Hengwulf, Aulenback and 2 others

Acid might play a role in the death maidens too, or other body chemical changes, to make them not just more toxin types. Also the runners' bow could have alternate ammunition too.

I do really like them - I feel death maidens could be very fun to convert. 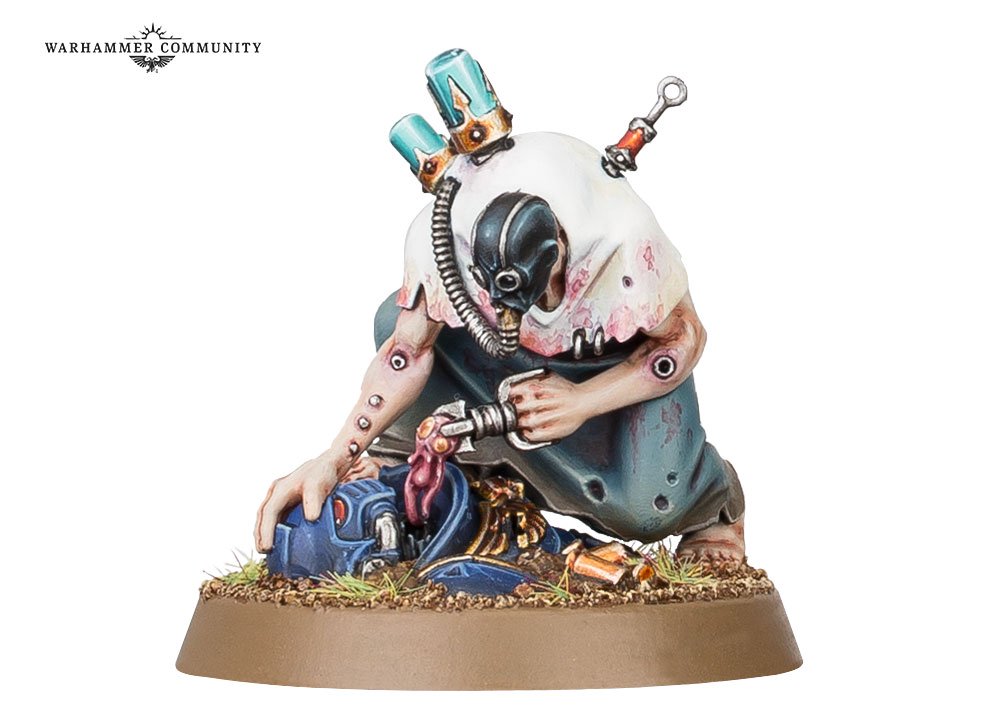 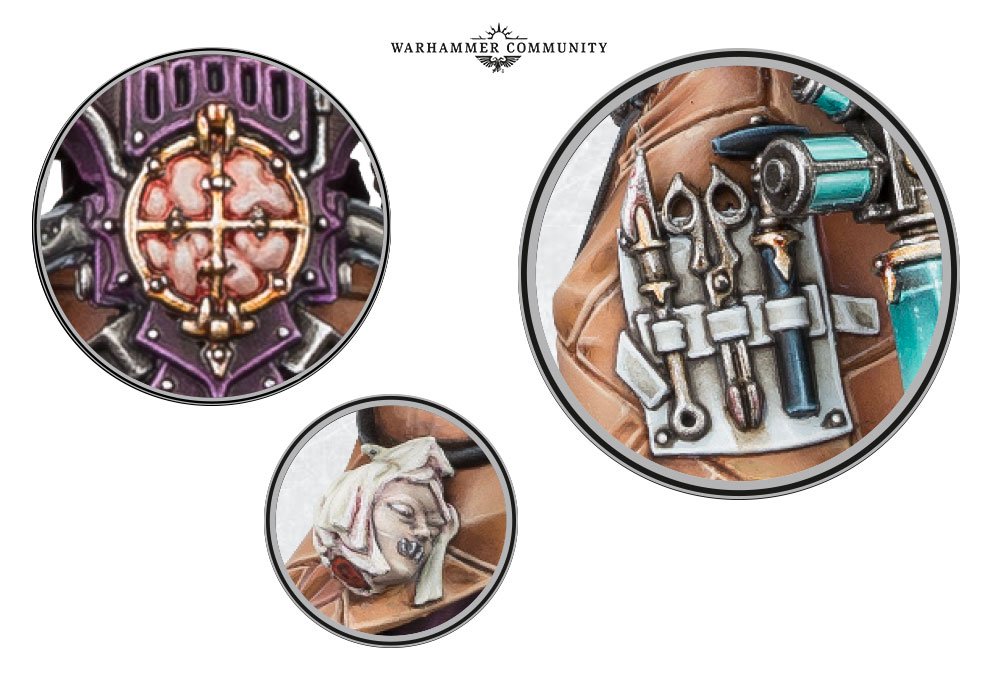 The wild runners look decent, presumably a go outside to prove yourselves and bring back the exotic creatures you find. High risk high reward bows would match the prospects we've seen already, and whips and knives make for a nice beast tamer/close combat annoyed.

The death maidens look a bit too dead but I think that's how they've painted them. Add a bit more colour and hint at death with pallid skin and I think they'll fit in nicely. Game wise looks like needle pistols, maybe shock gloves (?) and then i'm wildly speculating that they'll have resistance to injuries or perhaps a mechanism for making them from dead champions and leaders.

Designers did also suggest one gang wouldn't have prospects so it's possible Escher are it. Can't wait for more info this evening.

Hmmmm.... I quite like the archers. Still hate the heels... How can they run around with those? But I will just pretend those don't exist. But I like the archers. Not sure how they "fit" in the narrative, since guns seem to be rife... But I would happily see more gangs with less advanced weaponry, as it does look cool.

Those "Dead Lady" helmets look silly. Fine if you want to wear those during a ceremony or somesuch, but in battle you better believe those are going to be taken off.

Those beasts... I am sure it's the paintjob that make them look cartoony... I really dislike the current paint style of GW... But I am excited for the future. So much cool new stuff coming out!
D

No painter can make those rat skink look good.

At least you have extra head option for closed and open mouth rat. Such option, much wow!

Man I'm super disappointed with these! The vibe, new minis, everything. Nothing screams vicious punk ladies dealing plasma and toxin death and the feel is more fantasy than anything. Undead Escher, snarf cats, generic elf-like hunters - it's all so weirdly bolted on. Really, what are the bow girls doing there? Not even going to start on the zombies. Bah!
Last edited: Mar 10, 2020
Reactions: Space Truckin, MusingWarboss, Stoof and 1 other person
D

Bob played too much Crysis 3 that day, and then he start sculpting the new Escher.

Those deadmaidens fit better in a Chaos-themed gang, to my opinion.

Not really convinced yet by the Death Maidens, though other angles and another paint scheme might help there. The "jazz hands" look like they belong to Electro-priests, I wonder what they do...

I'm liking the Wyld Runners, I think there's actually a good case for bows to still be useful in the Underhive - at the very least, they're way more silent than most guns which is useful to a hunter. Their poses look good and I'm liking the slightly less "abundant" hairstyles they have as well. I'm thinking they are prospects because they seem younger (they appear somewhat slightler of build than the regular Eschers to me).

If they're indeed prospects, I note they have similar "collar armour" to the Forgeborn; makes me wonder if that's to be some sort of universal "prospect" indicator?

I quite like the lizard-cat things, as they do fit with the Escher background of being users of xeno-beast. A different paint scheme will help them, though, and if you prefer them more cat-like I think shaving off the fins will help a lot too.

At the very least, I hope this is a clue that we get dogs on the new Orlock sprue!
Last edited: Mar 10, 2020
Reactions: Aulenback, Petitioner's City, Sethmerlin666 and 1 other person

Like the girls a lot, not keen on the animals but think it's mainly paint....
Like the idea of bows, hoping they'll have a range of arrow types available and not just toxin
Reactions: sumpthing
B

My gf likes the cat-things. She warns me that if I get some (which is unlikely anyway) she'll call them Tiddles and Fluffy.
Reactions: jbrown527 and Hengwulf
Show hidden low quality content
You must log in or register to reply here.
Share:
Share Link
Top Bottom