Troubled Child said:
As a former Caledor player I did at one point really want an army that had loads of 3rd party dragons in it. Time is wrong though, you have to go back further than the new setting for it to make sense. Not that they'll let that get in the way I'm sure.
Click to expand...

There were always lots of hints in the fluff about the dragons finally stirring from their long slumber. Shame it never happened before the world went pop.
Reactions: Tiny

Troubled Child said:
As a former Caledor player I did at one point really want an army that had loads of 3rd party dragons in it. Time is wrong though, you have to go back further than the new setting for it to make sense. Not that they'll let that get in the way I'm sure.
Click to expand...

They’re revisiting the Old World in 2023 so there’s always hope. I dug out my 7th ed rulebook so I’m already revisiting it.
Reactions: spafe

If I had to guess there's a new Lelith Hesperax model incoming... also can't wait to get my SoB codex just as soon as the new one's available if the new announced model is any indication: 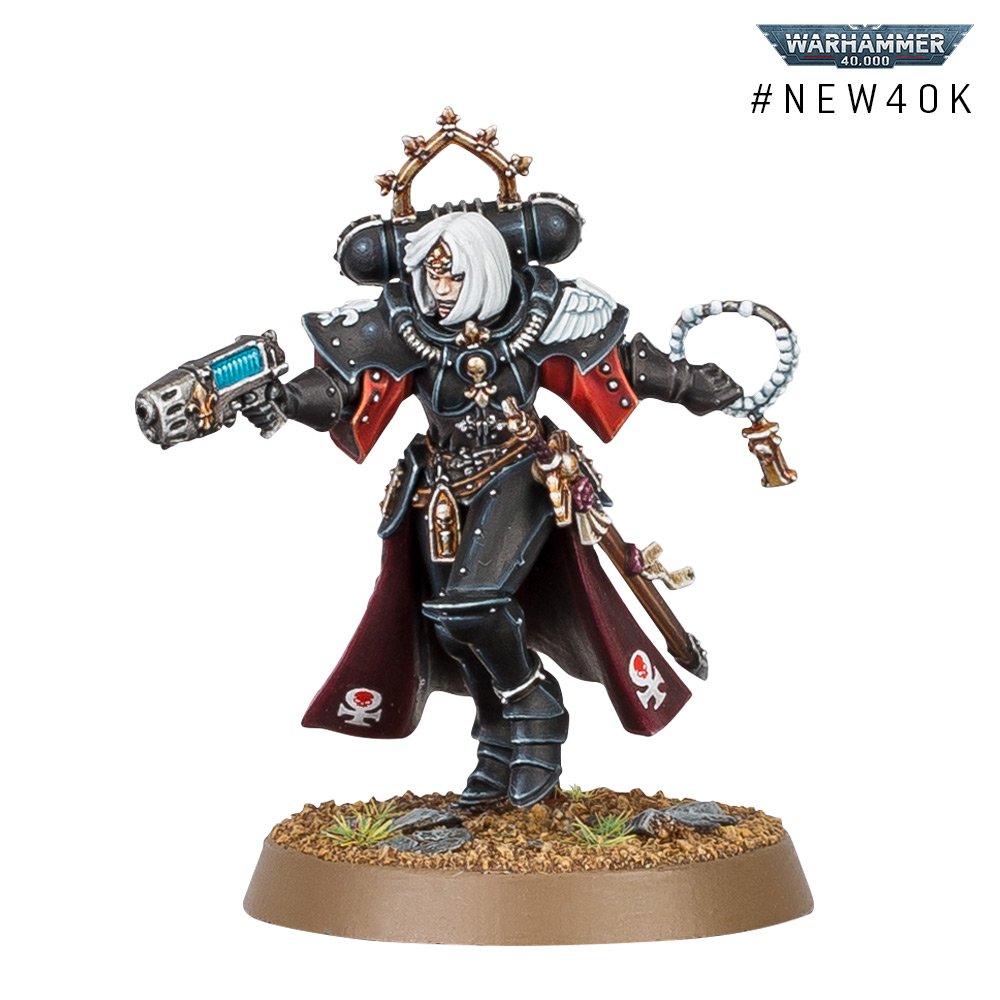 Hmmm, my only gripe with the model above is that there's absolutely nowhere for her power armour to fit under that demonstrably flexible basque.

Actually my second gripe (so two gripes) is that I'm not convinced that rosary is moving correctly/convincingly. Hopefully it's just the angle.

And as for the size of those shoulderpads... ah forget it, I'll come in again.

Otherwise a lovely model, my favourite lieutenant to date!

I hope you're right about that being Lilith, I'm optimistic we might have seen Urien Rakarth in that teaser video as well. May get myself the current haemonculus as a priority though, in case it's a generic replacement.
Reactions: undertaker

Maybe it's an angle thing... the shoulder pads *shouldn't* be any larger than the ones on any of the other sisters they've done, though I suppose they might've needed bigger ones to accommodate the pose?

Edit: Definitely using this as the base of my Canoness... can't stand that weird robe the existing one has.
Last edited: Jul 26, 2020 Yep - there are some more starter sets on the way for Warhammer 40,000. Check these out!

The biggest of which features that tank sat on a pipeline we saw on the box for the cardboard battlefield.
Reactions: Gunkaiser

Not great army builders looks like, but having a decent amount of included terrain is nice.
M

That's what it said in the BoLS text too - although it seems there's a different book too.

Forgeworld are releasing new models again, that Escher fighter we’ve been wondering about is a resin model. 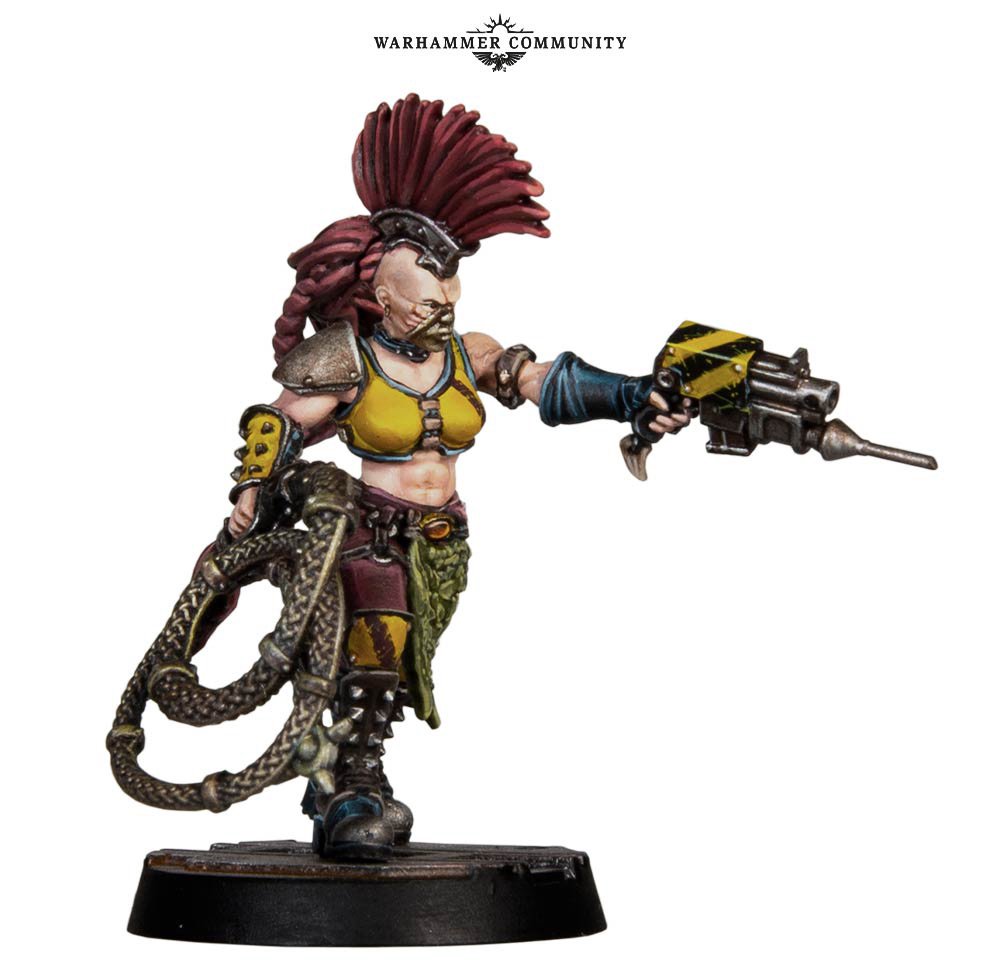 Bummer. Was really hoping for a new champion plastic kit (possibly with 'normal' juves as well).

If HoC is anything to go by, "juve" is now a term for an inexperienced gang fighter irrespective of age. 'Chains explicitly says that juves are represented by models from the gang box. And until they run out of other ideas for plastic kits or forgeworld gets around to making some, I expect that'll be the case for all gangs unfortunately.
Reactions: TopsyKretts

This was expected, right? Unreleased Slave Ogryns aside, did anyone really think Escher would be getting two plastic kits when House of Blades is released. My question is about the weapon options we've seen. Will these come with multiple options or will those be sold as a fourth weapon set for Escher?
Reactions: TopsyKretts

Might be the paint jobs but the new resin champions we have seen are shit. The new plastic box is nice tho.
Reactions: KuStrife

cronevald said:
This was expected, right? Unreleased Slave Ogryns aside, did anyone really think Escher would be getting two plastic kits when House of Blades is released. My question is about the weapon options we've seen. Will these come with multiple options or will those be sold as a fourth weapon set for Escher?
Click to expand...

It's my hope that they're experimenting a bit and what we're going to see is a resin champions kit (the article does mention champions in the plural), with a number of weapon options and possibly a rearrange of the weapon sets sold to date. For one thing, if the champion shown hasn't been cast to be compatible with the plastics and existing resin packs, then they've really shot themselves in the foot.

And with the more limited options for gangers and juves now, in forgeworld's place I'd be splitting existing packs into those for gang hierarchy (leaders and champions) and those for gang fighters (everyone else). Admittedly that delineation gets murky around specialists but unless the Escher ones are getting more than the three special weapon options their Goliath counterparts have, I reckon it would be a straightforward division still.

But I suppose if it turns out to be a case of buying a resin champion that has two or three options per arm, then at least prices per kit will be lower. I don't feel we've seen enough extra parts to fill out another weapon set but that could just be down to the previews.
Reactions: cronevald

I can dig the new, more practical-lookin combat boots, though. Although to be honest, I kinda liked the old, combat stilettos too, so eh.

Also, is that a new combi-pistol, or is it supposed to be the same kind of needle rifle/boltgun combi-weapon they already have?
Reactions: undertaker

I'm assuming a bolt/needle pistol. If that's meant to be anything other than a pistol, then I'd say that the selection of sculptors is getting worse.
T

Probably more filler from the upcoming book. Bolt/needle pistol combi. We already have the stats (unless they make another exception), so they only need to make up a cost for 'new' content. Without any updates to the trading post, this will be strictly Escher only. Perhaps they add it to some new hired gun as well.
Last edited: Jul 30, 2020

Right, this is more a notice for anyone who is near Warhammer World. I went over there today with a mate and while it's only shops open and full masked social distancing, I did notice they seem to have quite a lot of "OOP and Limited" stuff there!

So I picked up a 90s Jain Zar and a Ragnar. But they have 2 copies of Blackstone Fortress in there, a load of the Kill Team commander sets that were supposed to be OOP and some dice sets but possibly more interest to Necromuda fans they have 3 packs of the latest Goliath Tactics cards, five packs of CGC Tactics cards, six sets of CGC dice, four Enforcer dice sets, I think about three Enforcer Tactics card sets too. Also 4 sets of orange generic dice.

They also had two Underhive box sets in, three Dark Uprising, the plastic tiles, the barricades and original door sets too. Several of these don't appear on their websites now.

Loads of Blood Bowl stuff too, including cards and dice sets.

I'm not heading back any time soon but if there's anyone closer who can help any other Yaks out if they might want this stuff, or alternatively, maybe give them [Warhammer World] a call and see if they can post you one (after you've brought it obviously) then there you go.

Oh, 3 copies of the Realm of Chaos nurgle books, plus a few boxes of metal Sisters of Battle squads too.
Reactions: Space Truckin, Unslain, Galtarr and 1 other person
Show hidden low quality content
You must log in or register to reply here.
Share:
Link
Top Bottom