While building the last members of my Escher gang, I wondered whether I could ensure they would also be a decent starting gang for non-Newcromunda rules.
Most figures would ideally be shared, with just 1 or 2 being unique to either iteration of the gang.

After quite quickly going through the NCE rules, I landed on the following - is there anything particularly terrible about it, or indeed illegal, or should it be pretty okay?

Leader: the Duchess
-Boltgun
-Meltagun
-Sword
(She's modelled with a combi melta-bolter, and while I feel it'd be okay to just count it as a boltgun to begin with, it seems fun to have a melta from the start. Because it's a melta.)

Heavy: Kitty
-Heavy flamer
-Laspistol (heavy flamer looked like a good gun to have a back-up weapon with)
-Knife

Ganger: Valentina
-Shotgun
---Man-stopper Shotgun Shell
---Hot-shot Shotgun Shell (wondering whether to get these and the above, or a back-up stub gun for someone)
-Knife

Heavy stubber and 2 lasguns provide long-range support, rest of the gang obviously more close-range oriented with a shotgun, melta, heavy flamer and some pistols, with a bit of melee potential thrown in.

Any tips, changes or thoughts about the first expansions you would add to the gang (in terms of extra wargear or new warband members), so I can think of building the suitable models?
G

I asked for comments on two NCE gangs not long ago, and didn't get many replies. Seems there are not that many NCE players anymore. For what its worth, I also went with the stubber and heavy flamer combo. Your leader should be able to avoid combat the first game with that bolter, so I would drop the sword and use the credits on a ratskin. I haven't played NCE yet, but when I played the original N95 I found the ratskin to be worth every credit for its special rules.

One thing to keep in mind is that you start with 5 territories, but you only have 4 gangers. However adding a 5th will put you into a worse income bracket. In my own gang I plan to wait til either a Juve upgrades, or I can afford 3 more models. My experience with N95 was I usually got a territory that wasn't worth working. However it makes you play less aggressively because you can't afford gangers to go OoA and be unable to work a territory.
Reactions: Ben_S and Coenus Scaldingus

Thanks for the response!

Ratskin does sound like a fun conversion project, I'll look into that, and keep your other comments in mind too.
B

Gelugan123 said:
One thing to keep in mind is that you start with 5 territories, but you only have 4 gangers.
Click to expand...

I was going to mention this, but also I think the list's illegal - only 4 gangers out of 9. Don't you need 50%? Or has that changed?
G

I don't recall that ever being a rule. I don't see anything like that under Gang Recruitment in either my copy of the original or NCE. Are you mixing up "No more than half the gang can be made up of juves"? Or perhaps that is a rule in the newer Necromunda?
Reactions: Ben_S
B

Ah yes, you're right. I knew there was a 50% rule, but was misremembering which way round it went.

Funnily enough, it's not entirely consistent. Scavvies have to take at least 50% regular Scavvies (their gangers). But you're just capped at 50% Juves in House gangs.

That said, there are still serious downsides to running only 4 Gangers, as you pointed out above, depending on your selection of territories.

One question I have on gangers and territories - can you only send one ganger to each territory, or can you send more than one ganger to a territory after a battle? I can't find it explicitly stated either way but wonder if I am being blind...
B

It's on p. 93 of NCE, in red text (suggesting an addition to the original). 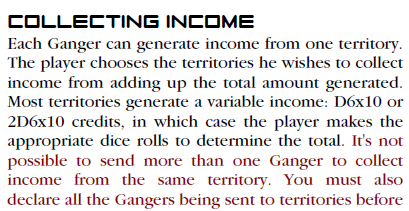 It may not have been explicit in the ORB, but it was clearly the intention (otherwise, no one would bother working less lucrative territories).
Reactions: MusingWarboss and Petitioner's City

Ben_S said:
It's on p. 93 of NCE, in red text (suggesting an addition to the original).

It may not have been explicit in the ORB, but it was clearly the intention (otherwise, no one would bother working less lucrative territories).
Click to expand...

Thanks! Somehow I didn't see this

It’s been a while since I’ve played ORB or NCE but your gang looks decent enough and has a good variety of weapons.

Are you writing knife after most fighters because you are purchasing another knife or to represent their free knife? If it’s the free one then keep in mind that all your fighters have one even if you buy better weapons and you can’t sell them.

The club juve is a bit odd. Not bad just odd as they are usually only given a pistol and used as cannon fodder.

Tactically it’s best to break them into groups of three for pinning support and to have a juve at the front of the groups that are going to be closest as the enemy needs to shoot the closest model.

almic85 said:
Are you writing knife after most fighters because you are purchasing another knife or to represent their free knife? If it’s the free one then keep in mind that all your fighters have one even if you buy better weapons and you can’t sell them.
Click to expand...

Yeah, those are just the free ones - just mentioned them for my own sake in case I want to model any of them holding knives, and to have an overview of everybody's main melee weapon.

The club juve is a bit odd. Not bad just odd as they are usually only given a pistol and used as cannon fodder.
Click to expand...

That one is just based on the model I have for him - the knife would be a stiletto in Newcromunda so a bit more potent, but I figured he'd fulfil the role of "standing in front" fairly well even without a ranged weapon. Then again, I can probably model another juve with a pistol down the line, but as you say the current loadout probably isn't the worst waste of points in the world.
Show hidden low quality content
You must log in or register to reply here.