gonna do this one part at a time.

chaosticket said:
I really would like to see people actually rationalize the things they want to put into Necromunda, but also why if
Click to expand...

it's the beautiful thing about freewill. it doesn't NEED to be rationalized if the people who put these things in enjoy their usage. don't like it, don't use it.


chaosticket said:
A they dont want to use any Fluff why they dont go to the combat based Warhammer 40,000,
Click to expand...

i can think of a number of reasons. 1. time, or lack thereof. takes a minute to build even a small battle force for a large scale game. 2. money, or lack of. cost of starting an army is somewhat prohibitive if you're working on a budget. 3. smaller skirmish games have gained popularity lately thanks, in part, to the previous examples, i assume.


chaosticket said:
B If they want more fluff and less combat they do not go to one of the 6 warhammer 40K RPGs, or
Click to expand...

some people don't like p&p rpgs. many of us cut our teeth on dungeons and dragons, but as time wears on so do tastes. using myself as an example, i have been a d&d players since the late '80's. when malo got me into my first game of necromunda i was hooked. we still played d&d and the like, but i really wanted to be wargaming. i currently have near zero interest in playing rpgs. i still play them as long as the concept interests me. standard swords and sorcery fantasy won't hold my attention, the scifi grim dark might interest me depending on who's running the game, mutants and masterminds entertains the fanboy in me, but only minimally holds my attention. just because the story isn't everything in wargaming doesn't mean it's nothing.


chaosticket said:
C Why play Necromunda at all if they dont want to play the Core concept of gang warfare.
Click to expand...

i think you're shining too narrow a light on the idea of "gang warfare." look at some of the scenarios GW gave us. ambush, for instance, if you replace the word gang with the word squad, the scenario turns into something you might have heard a war vet talk about at some point. the raid sounds like something seal team 6 might have had their hands in recently. same for rescue mission. a gang doesn't have to be a bunch of bikers, or a group of trouble makers from the rough parts of town. a grouping of people is all it takes to satisfy the definition of a gang. a specialized military unit could fit that description.

in no way am i saying you're wrong. frankly, i like the way you think. i may not agree with what you think, but critical thinking is the only way you can truly learn.
Reactions: trollmeat
C

Ive been accused of trolling by a staff member. Ive read statements implying that people are unable to fathom small scale games of warhammer 40,000k in comparison to small scale Necromunda games. Ive asked people for their own backstories, campaign concepts, and ideas but instead Ive gotten stand-offish responses like I am offending them by asking.

Sigh, it is a waste to keep asking about anything here. It seems to be the same inconclusive statements without anyone actually adding anything or even really saying anything in relation to the topic title.

Ive wasted over 2 weeks of my life asking for people to actually show their fluff.
D

Speaking as the person who's told you the key difference between (and reason to want to get more into the rules for) Necromunda and a small-scale game of 40k, it is frankly getting harder and harder to maintain a civil tone in the face of repetitive 'But why not just play small games of 40k?' I've told you why not about half a dozen times and now I'm the one who's unable to 'fathom' some unspecified 'comparison'?

At this point I consider Cardyfreak's 'accusation' proven and will not be intentionally further responding to you on this or any other thread. Have a nice life.
Reactions: trollmeat and spafe
C

That was an offtopic statement that proved my point as it has nothing to do with Fluff or House rules. It was nothing more than an insult and trying at getting in a 'Last word".
========================================
But Ill try to connect things back to the original topic starter. Warhammer 40,000 requires more suspension of disbelief that some people may think. In the series things get glossed over to make some races plausible in any area just to keep some campaigns or storylines going. Maps of the Milky Way galaxy are (obviously) limited in real life and Imperial Galactic maps are rarely shown, let alone recent ones. For the sake of argument its ignored that many of the aliens races are actually locked into certain regions of space.

The Eldar often times use ancient Webway Portals to traverse the galaxy, but one fundamental fact is that the former region of space occupied by the Eldar Empire 10,0000+ years ago was transformed into the Eye of Terror. This means Craftworld eldar are basically space-nomads and all types of eldar somehow have webway receivers in places theyve never visited.

Necrons have Tombworlds built in places nowhere near their old empire. Tyranids are invading from the southeast direction of the galaxy. Tau are just plain limited to the Damocles Gulf region and have short range warp travel, no astropaths, and far fewer worlds preventing them from traveling far or realistically being a threat to the Imperium as a whole.

If you think too much into it then you can kill fun with logic. Necromunda can have the same problem as you can kill or allow potential interesting ideas by how serious you are taking things.

I've always believed you should "never spoil a good storey with the truth". Having Just watched The Martian it's a good example. Fantastic storey, but if you start thinking 'truthfully' about the science it wouldn't have been half as good.

Just my 2 creds worth.

After replying with fluff that justifies aliens in Necromunda, direct from the book including page numbers, I have patiently read each reply as it has come in, and all I can really say is that someone is missing the point: I am going to assume it is me.

Every set of custom/fan made rules I have read has been fluffified(fluff justified), and they haven't even had to stretch to do so (each Hive city is a behemoth blight on the face of the planet with many stories written by Games Workshop about how small groups of Xenos can be found wandering around), so that can't be it.

Each fan/custom gang/squad/group is offered up so that players may choose to use or modify them in their own part of the Hive, or their own Hive World. As nobody is saying that you HAVE to use or accept anyone else's variants in your own gaming group that can't be it either.

It could possibly be a misunderstanding that Inquisimunda, which is a combination of Xenos from the Games Workshop game Inquisitor and the XP/advance/campaign system of Necromunda, but as that is set anywhere in the 40k Universe rather than on the actual planet of Necromunda it probably isn't that either...

Perhaps it is the Squad versus Gang language issue, but a group of Xenos lost/trapped in the Hive would function in the same way, scavenging in the wastes and lowering themselves to trade with filthy humans to survive so it can't..,

So this is where I am really stuck, every point has been addressed, including Official examples. I am completely failing to understand why there is any issue at all, but as for unofficial examples my Children of the Spore(Fungoids and Sporelings) were pointed out. They are creatures that do not exist in the 40k universe, that were inspired by D&D's Myconids, and while I have written some rules and started testing, they are not something I am trying to get others to play.

I've also started writing rules for using Beastmen in the Underhive, as well as my own version of a Pyro based Spyrer, a Genestealer Cult where the Initiates are treated in a manner similar to Henchmen in Mordheim, a Carnival gang with lots of mutants based on Scavvies, a dozen special characters that I've not posted here, and various other miscellaneous monsters/underhive denizens...

Would it help if I said that nobody questioned it for a second when we had an event where several gangs banded together to ambush a "sump monster", which turned out to be the remnants of a squad of Plague Marines?

*I* must still be missing the point, but I can only assume that the next reply will be a variation of the exact same "~why for xeno? you no fluff good".
Reactions: enyoss, spafe and djmothra

Beastmen used to actually be part of the Imperial Guard back in RT times - I think they still should be. Ah, I miss the original Ultramarine Librarian...an Eldar!
Reactions: spafe and trollmeat

What about the first Inquisitor? @djmothra ? 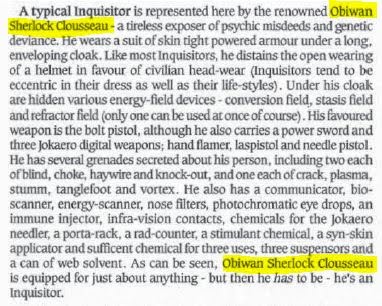 Given this is some 'official' stuff put out by GW, the stuff fans create to justify their own home made rules is significantly higher quality (in terms of realism), than some GW stuff. Don't get me wrong, its this silliness that has half the appeal, but that's not as relevant for this discussion is it...
Reactions: nooker, djmothra and trollmeat
Show hidden low quality content
You must log in or register to reply here.

Tribe News Today at 6:36 PM
Ben_S
B
R
Tanks are a waste of resources