Ostermark: A guide to the Empires East March

In the north, there is the arm of the Great Forest known locally as the “Gryphon’s Wood” that follows the line of the Upper Talabec and contains the province's new capital, Bechafen. The Gryphon’s Wood around Bechafen has long been the centre of Ostermark’s political and economic life, especially since the destruction of the old capital at Mordheim in 1999 IC. The region’s main exports are lumber and riverboats, the latter often built on the spot from some of the trees harvested that season.
Every Count in the Empire will maintain their own personal guard, these are Greatswords, veterans of many battles, almost as tough as my lads. Hertwig was no exception, he kept a retinue in his capitol, although also syphoned off portions to guard his commanders. The regiment that joined us was known as the Bears, both for their stubborn nature and the fighting bear they brought with them. As the Gryphons wood and northern border of Ostermark is so close to Kislev, the warriors there also share an affinity with Bears from their northern neighbours. 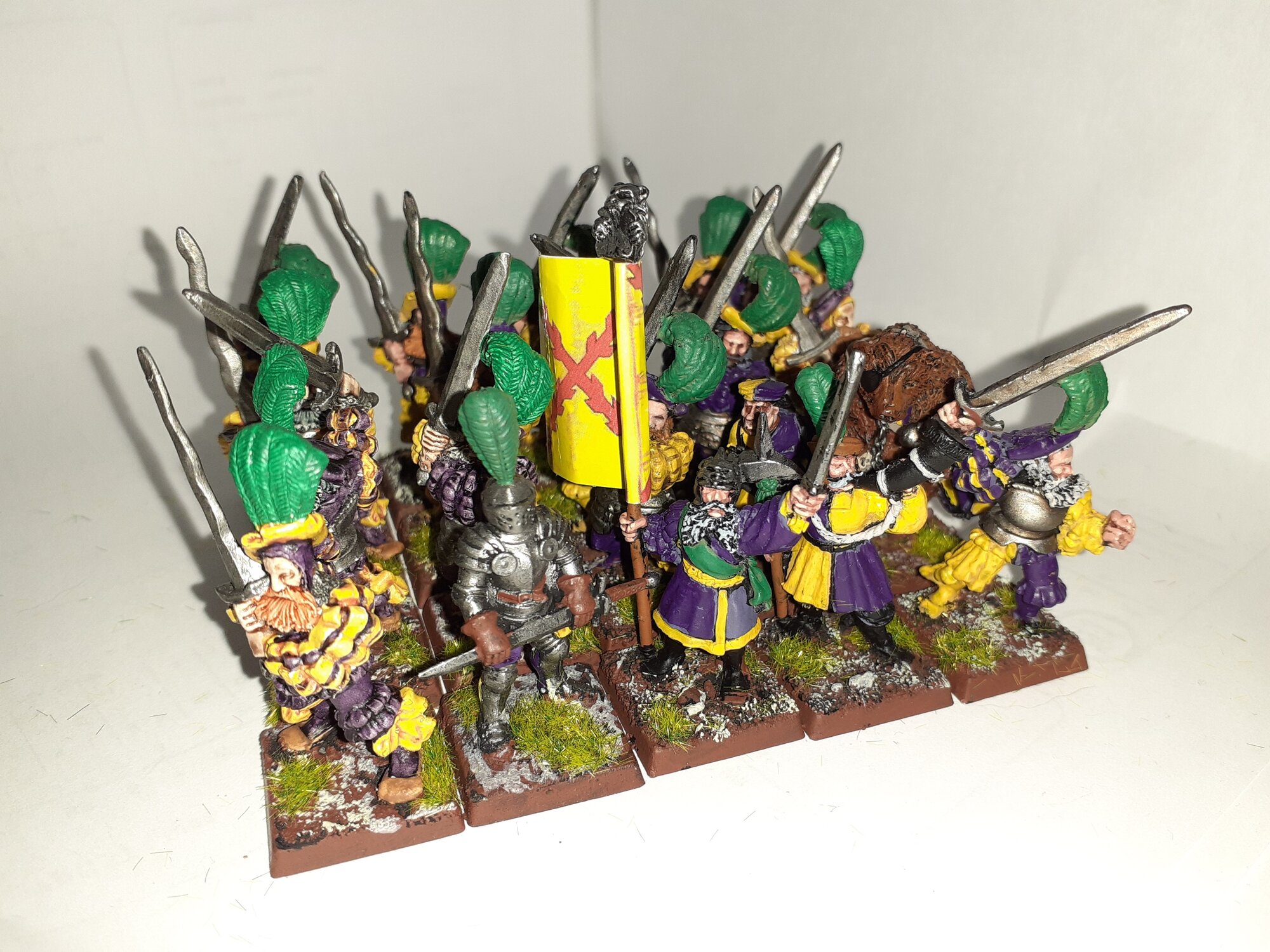 The Bears, Greatswords of Gryphon's Wood

These guys were great fun to paint. I love the old greatsword models. I really wish they had a couple of extra poses, but hey, they are a delight either way.

They are not great on the battlefield, always striking last, and only being str/t 3 with a 4+ save, they are basically a very middle of the road unit, that costs a lot. However I love the fluff and the models, so I'll be trying them as much as I can to see if I can find a niche for them. 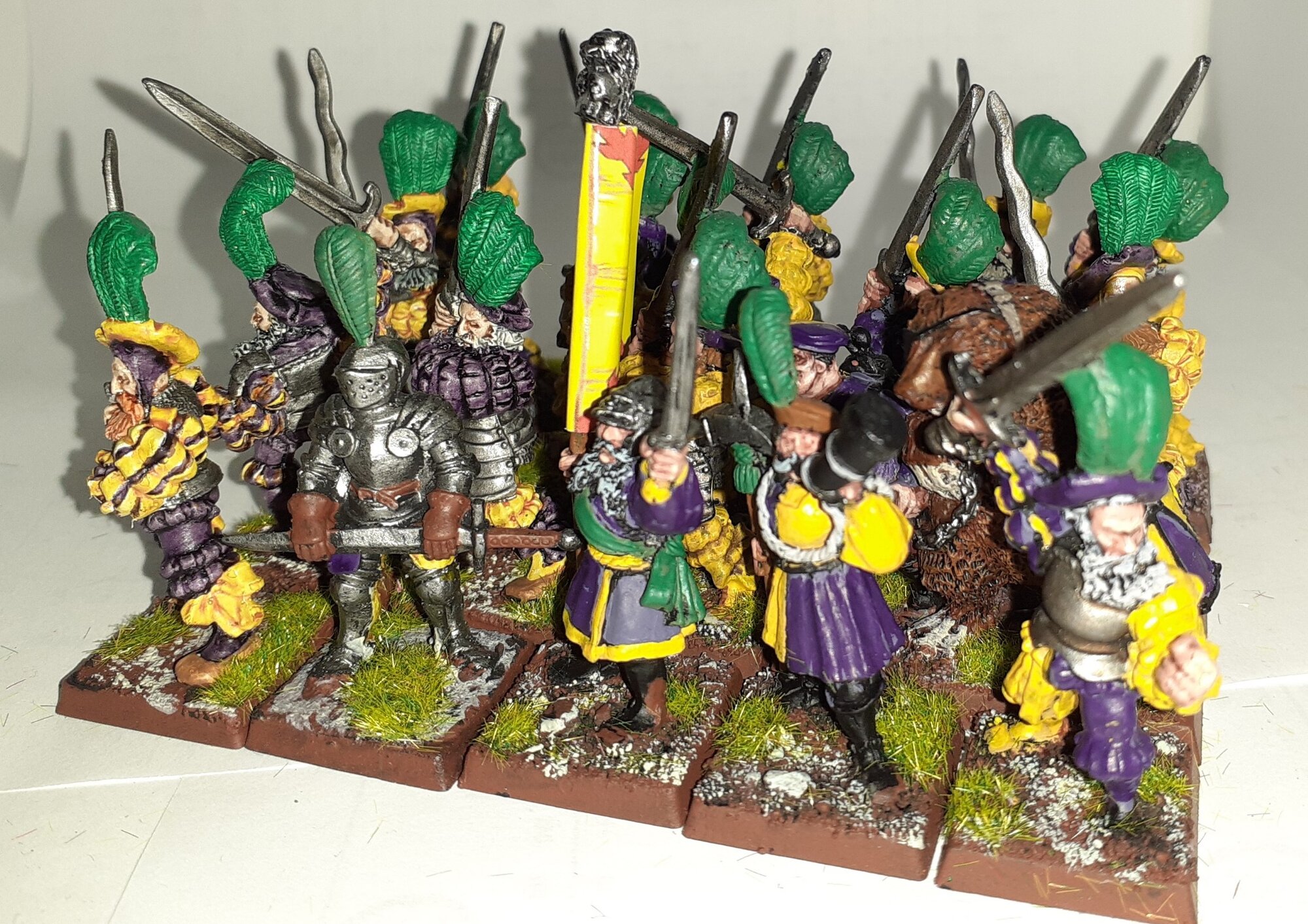 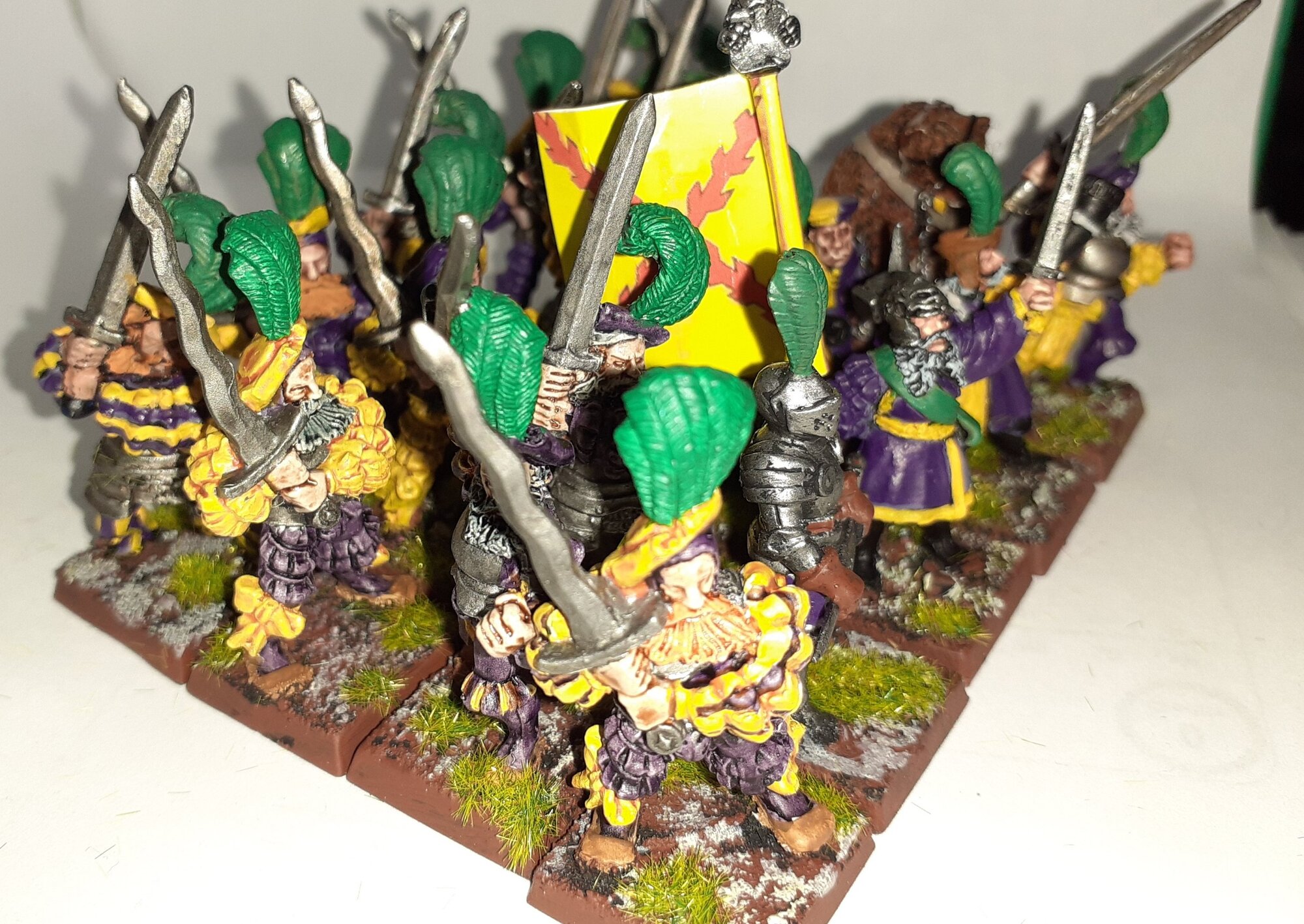 So, the battlefield is a confusing place, commanders must be able to identify their troops at a glance, sargeants will want to pull their troopers back in line, and know who is theirs. The way this is done at an army level is through banners, regular army will always march under a banner, each trooper knows their own, as that is what they must rally around. At a more local level, troopers regularly wear coloured feathers or other identifying marks of colour so they can tell their fellows from the rest in a melee.

The Counts Greatswords had green feathers. The gunnery college at Bechafen equips their troops with a blue feather. This is the only occurance where different regiments will have the same colour, as the pistoliers and the handgunners from the college all wore the same. There was a great rivarly between the two regiments, marksmen compeitions were regluar occurances, and as this led to troops from both practicing off their own backs, the champions of both encouraged this friendly competition wherever possible. The footgunners are often referred to as black and blues, due to the soot and smoke that would cover them after their first volley. They have adopted this with a level of pride, a sign of a hard days work, unlike the reckless riders of the pistolliers. 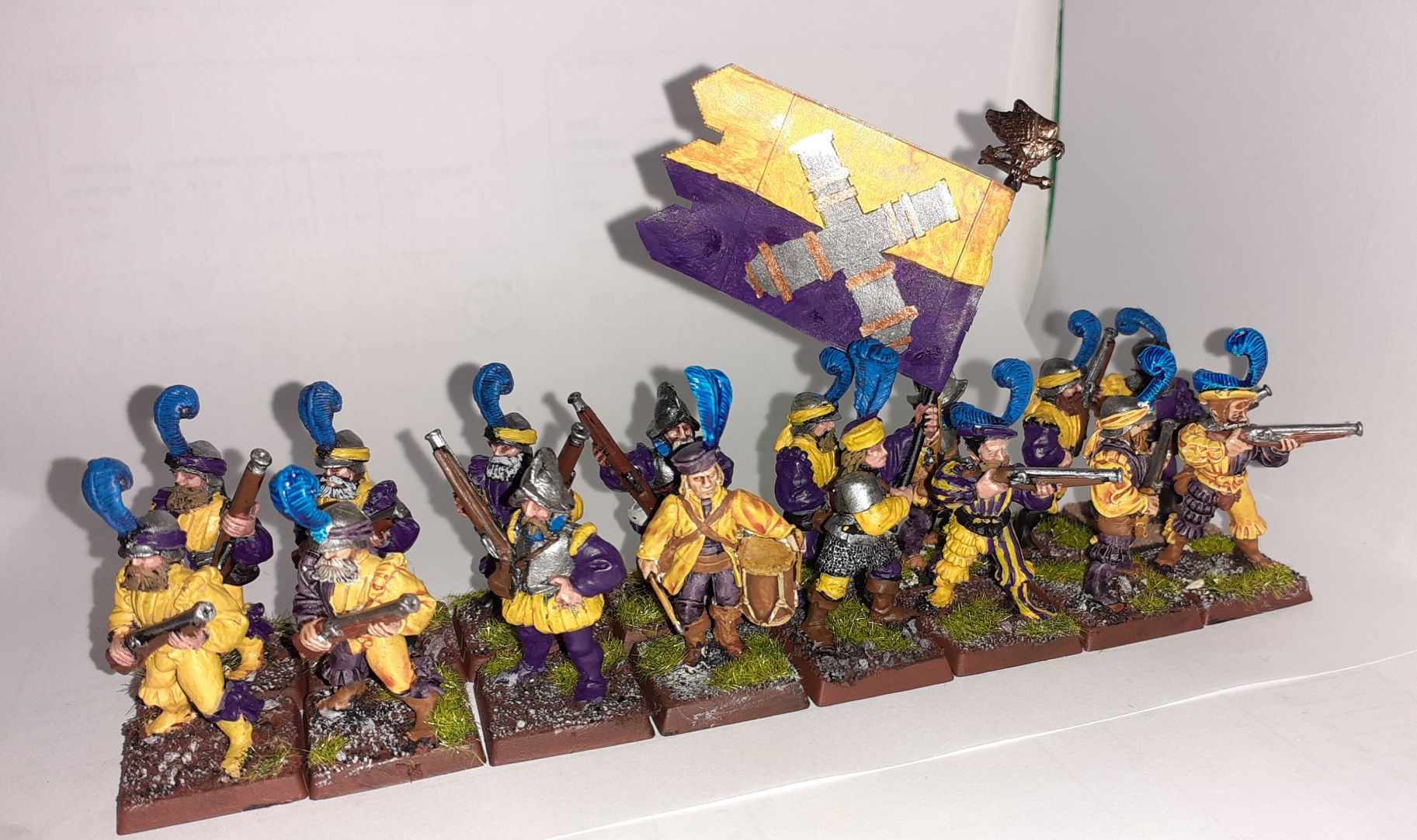 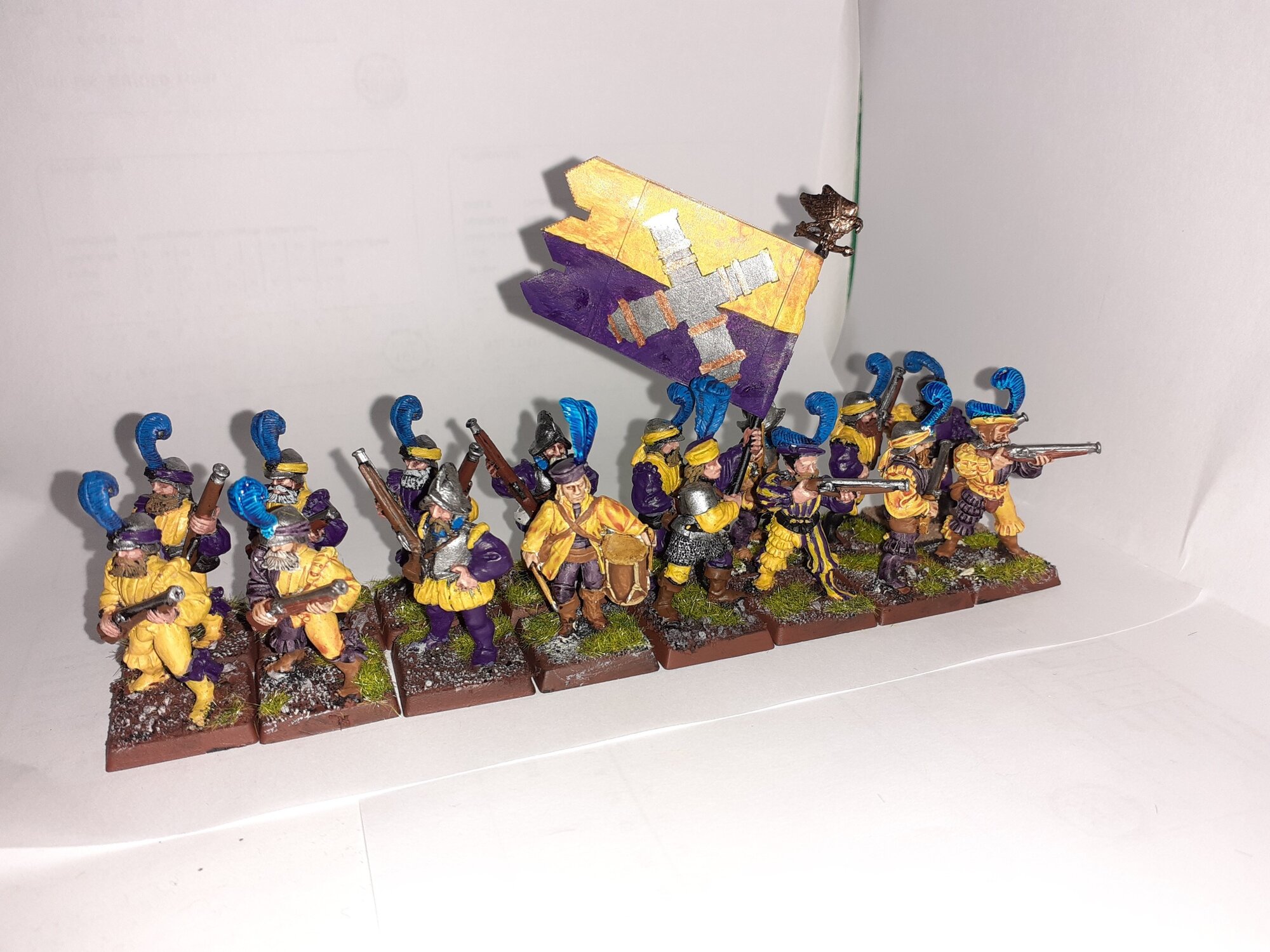 These are a really fun regiment, I have made a full command for them, although I suspect these will be the first things dropped when points are tight as they actually do very very little for the unit.

I'll try to put up my progress chart at the end of the week, more has been done, but progress has slowed quite a bit recently, starting to feel a little burnt out, and have branched out to get some other random models done as well. Also, I built a steam tank over the weekend, although it might not make it into the spreadsheet for this month.
​
Reactions: Crazy Ivan, Ben_S, Mutant Modifier and 4 others

Not a huge update today, but my months end progress report. I will try to get a couple of updates next week to show off some extra units. 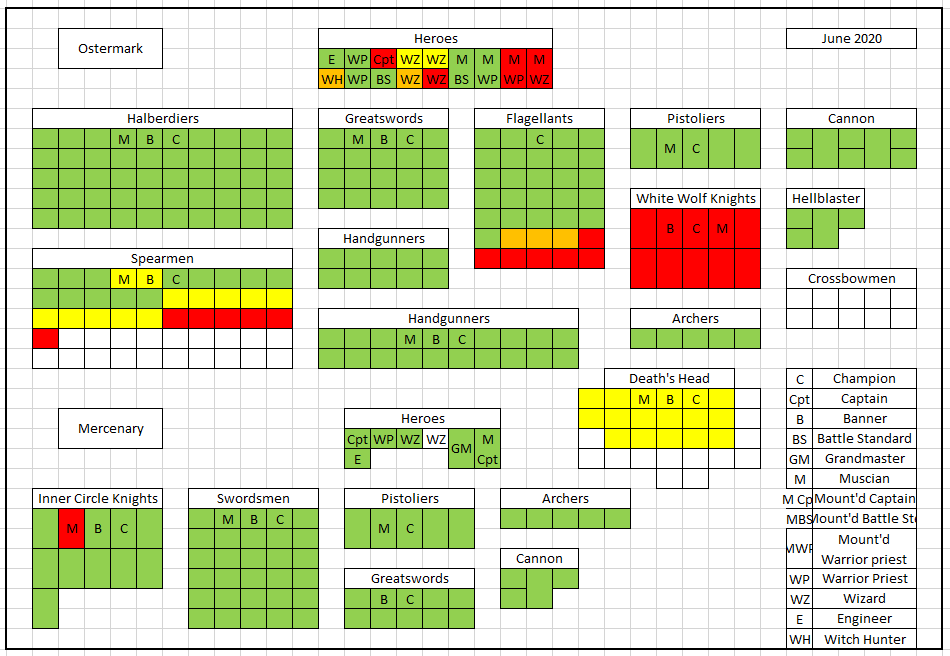 Ah, if it isn't the Boy! Been too busy for another of your history lessons have you? Put some logs on the fire over there and settle down.

The Gryphons wood is vast, and the Greatswords who come from there are few in number, most soldiers raised in the Count's tithes are not such fine examples of Empire military craft. Not as dangerous as other forested areas, the Gryphon’s Wood is home to many small villages and isolated steads, while ruins of older villages, and even small towns, lie deep within it. These villages and towns are frequently visited by recruiting sargeants who round up able bodies to serve in the state armies. Since the war began, the eastern end of the Gryphon’s Wood below Fortenhaf has become home to Kislevite refugees fleeing the devastation of their lands. Outlawry and river piracy have become a problem there, and the government in Bechafen is considering sending a force to aid the Margrave Röntgen in restoring order.

The troopers who come out of such areas are misfits, barely above a rabble of militia, but after a few battles, those who survived hardened up well and became a solid veteran core around which the Ostermark built it's armies. 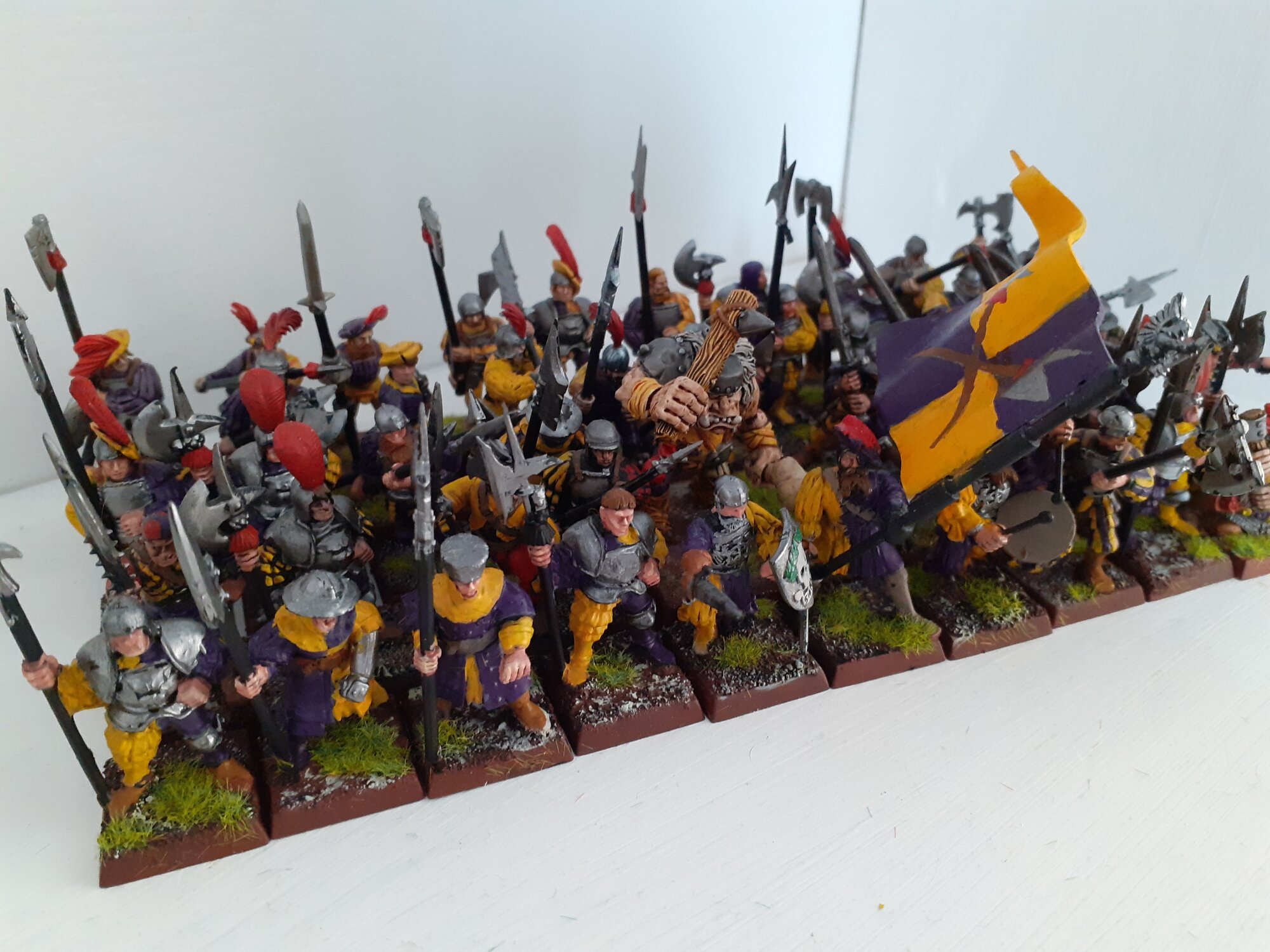 These guys were built over a long time, there are a couple of Dwarves in there, and a Ogre. The kits are old empire, new empire, middle empire, brettonian, milita, basically everywhere. Hope you like em! 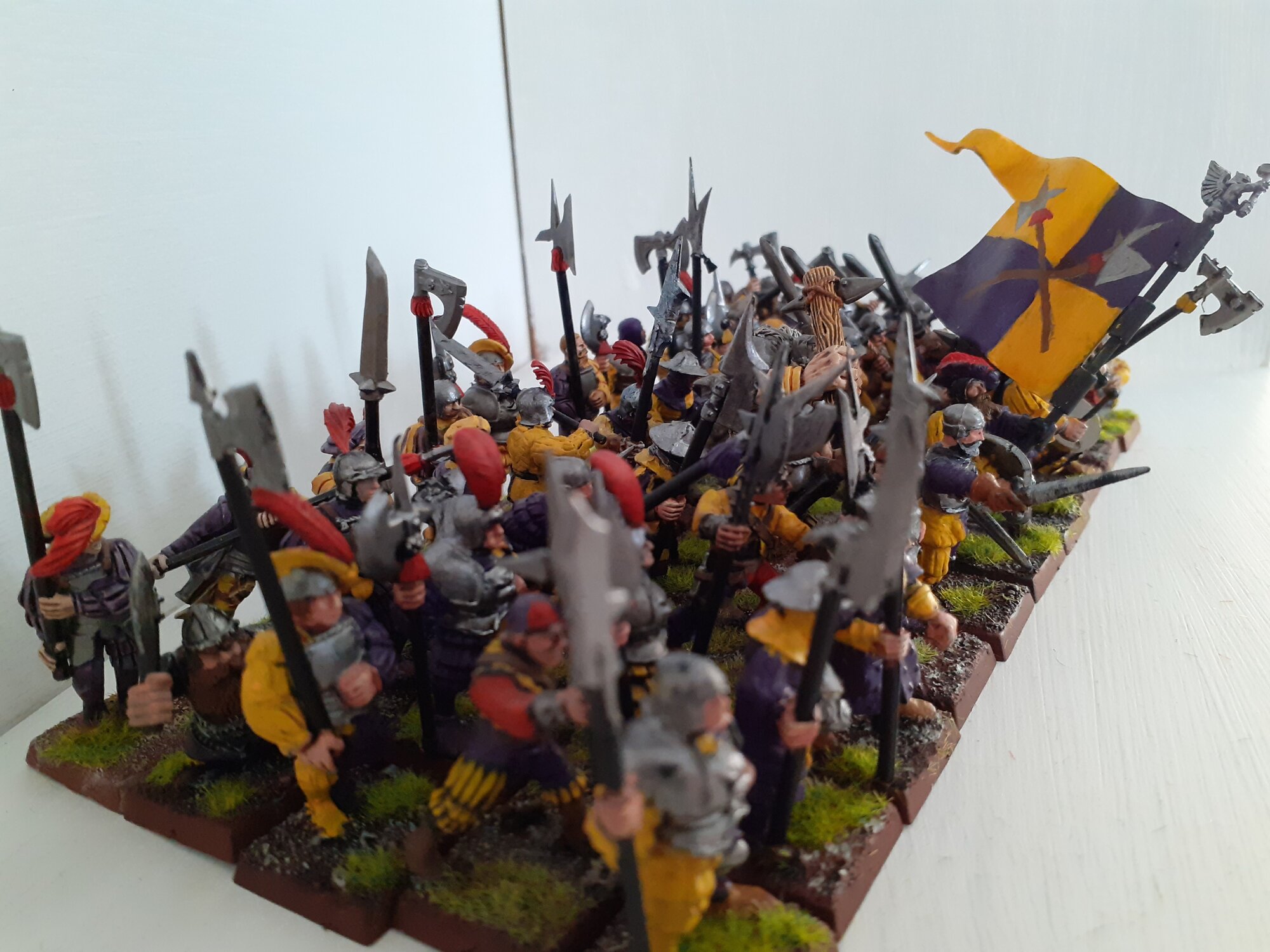 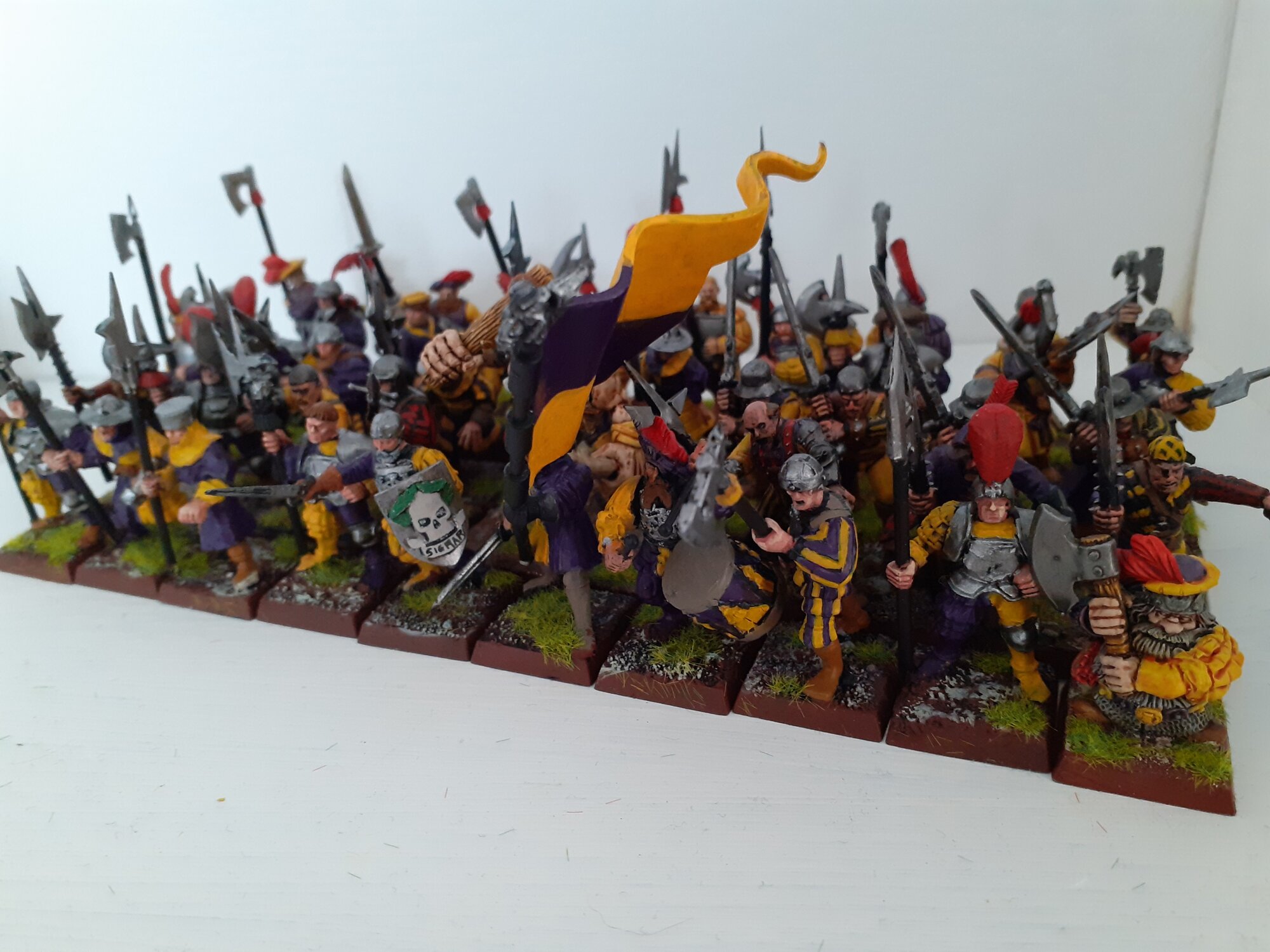 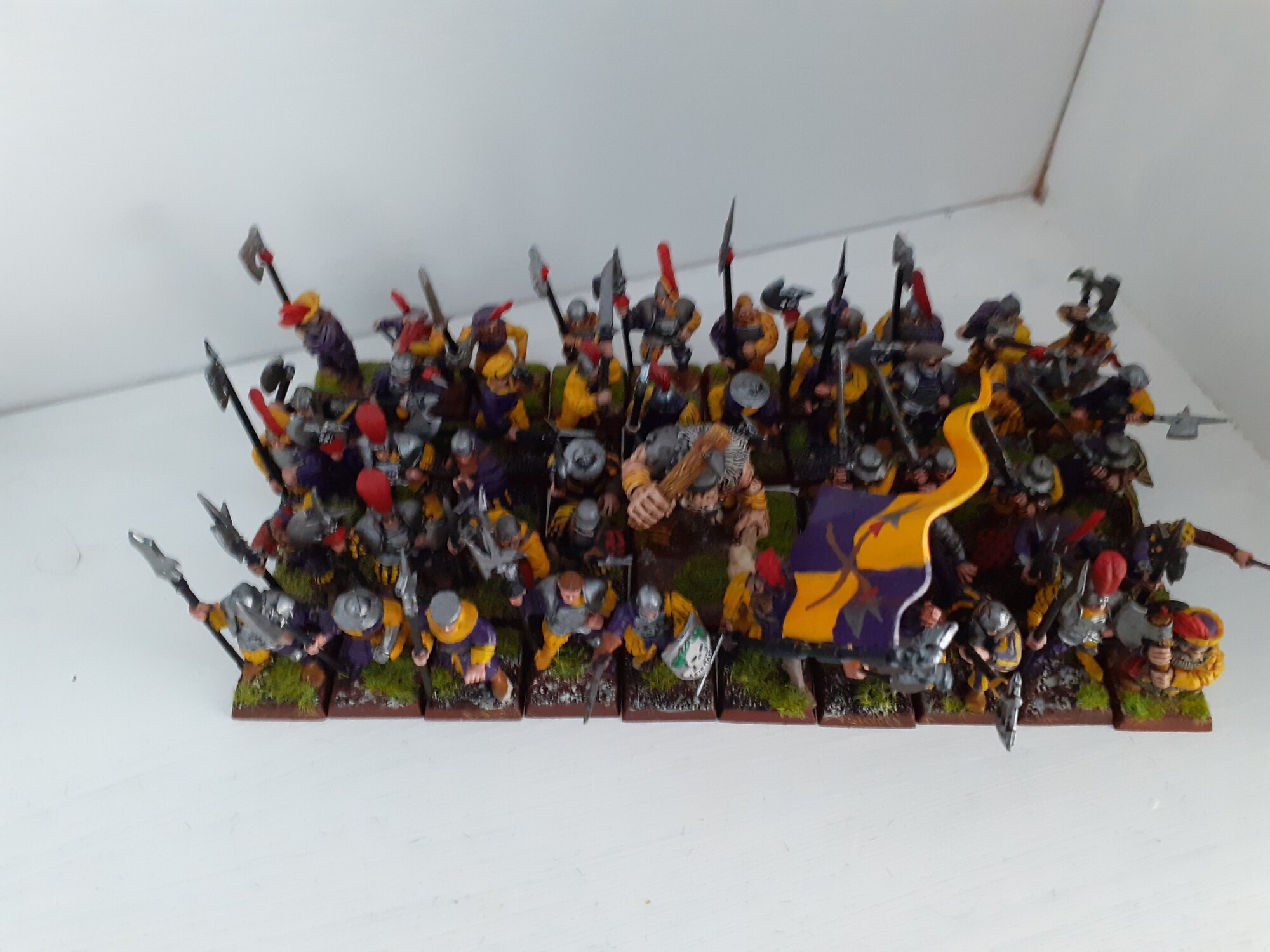 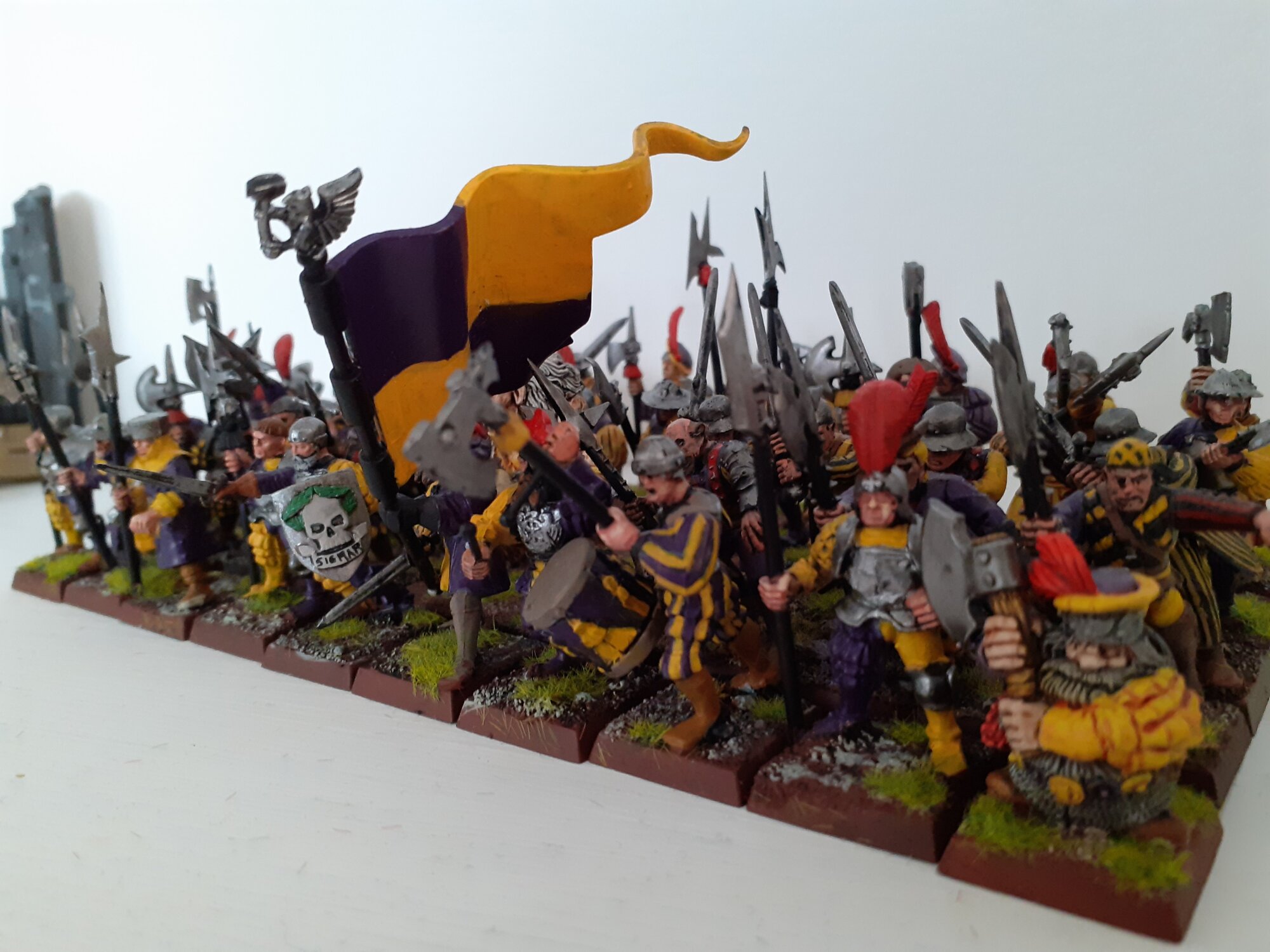 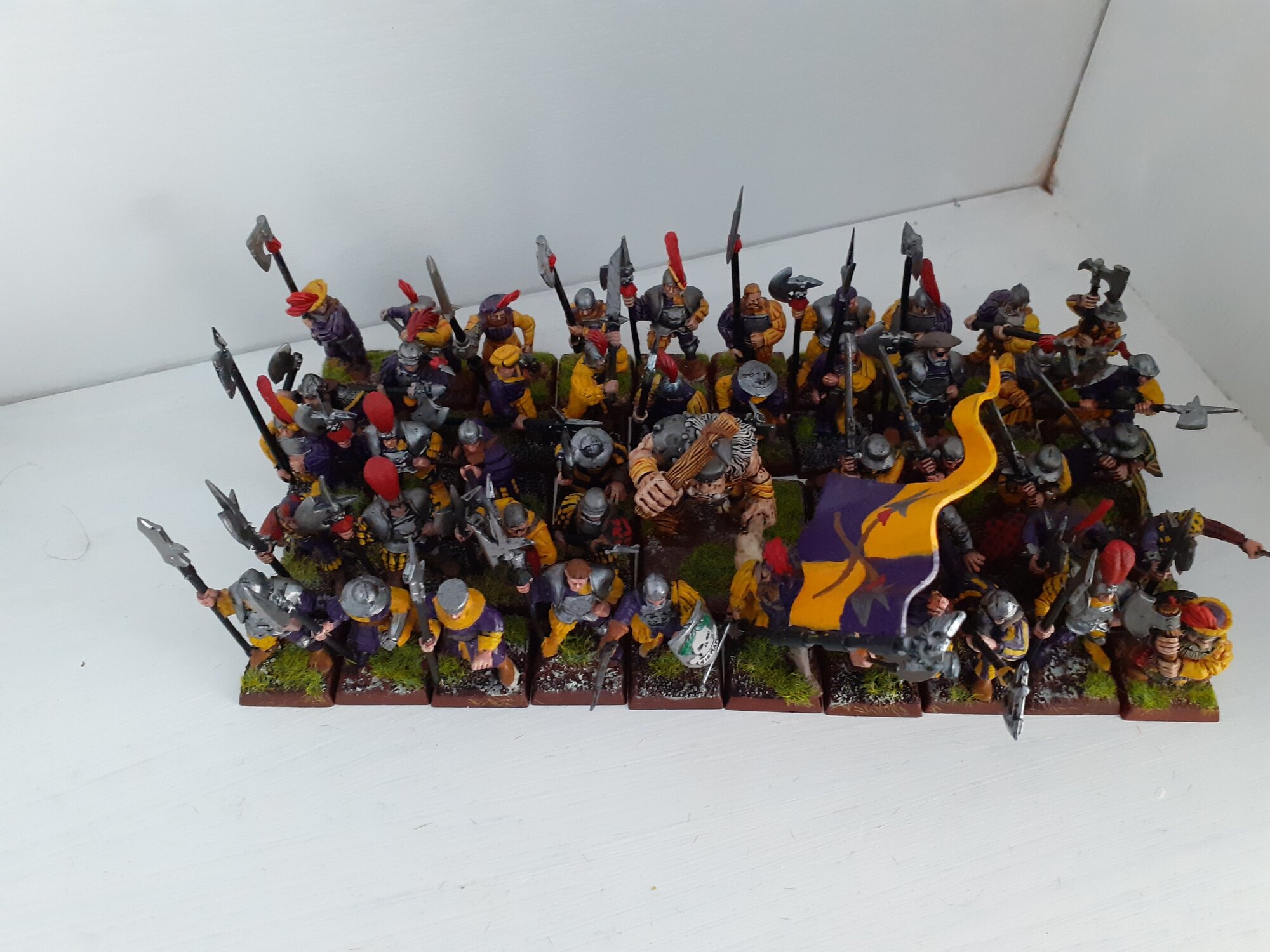 Ha! I know that cut, you've been practicing with a bow haven't you, hunting no doubt! Well I'm sure that smarts, right across the cheek. Teach you to show off trying to put too many arrows downrange too quickly though. Never be a proper archer with that sort of mistake! Well we might as well touch on the oft overlooked element of Empire military, of which the Ostermark is no exception. Not to the level of Stir's river patrol, or the huntsmen of Hochland, but certainly passable, and better than the mob we picked up!

The Bleak Moors occupy the central portion of the province, and include the Eerie Downs to the south. Both areas are thinly occupied, the towns and villages mostly clinging to the rivers. Within the Moors, sheep herding is common, though there are small herds of dairy cattle, too. Isolated farms and cottages are scattered across the landscape, the herdsmen and crofters living in them preferring their solitude and coming to town sometimes not even once a year. These hardy loners make fine archers and foragers for the Count's army.

Any travelling army will aquire some foragers to help keep the army fed, and our company was no exception. They were good enough poachers, even the officers learn't to stop asking where the meat came from, but they were piss poor shots in battle. Still, they got better, their accuracy anyway, even if their courage was always lacking. 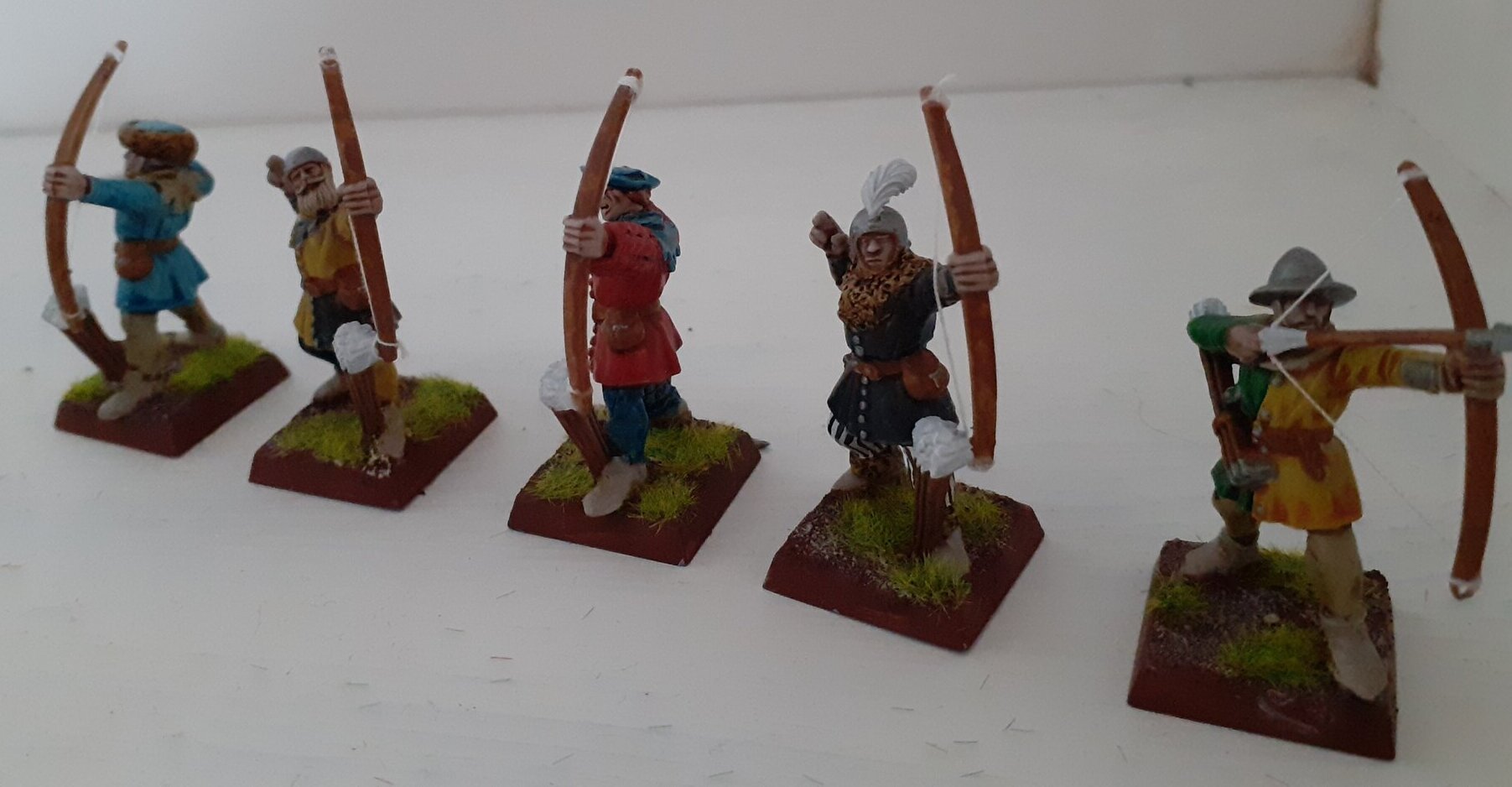 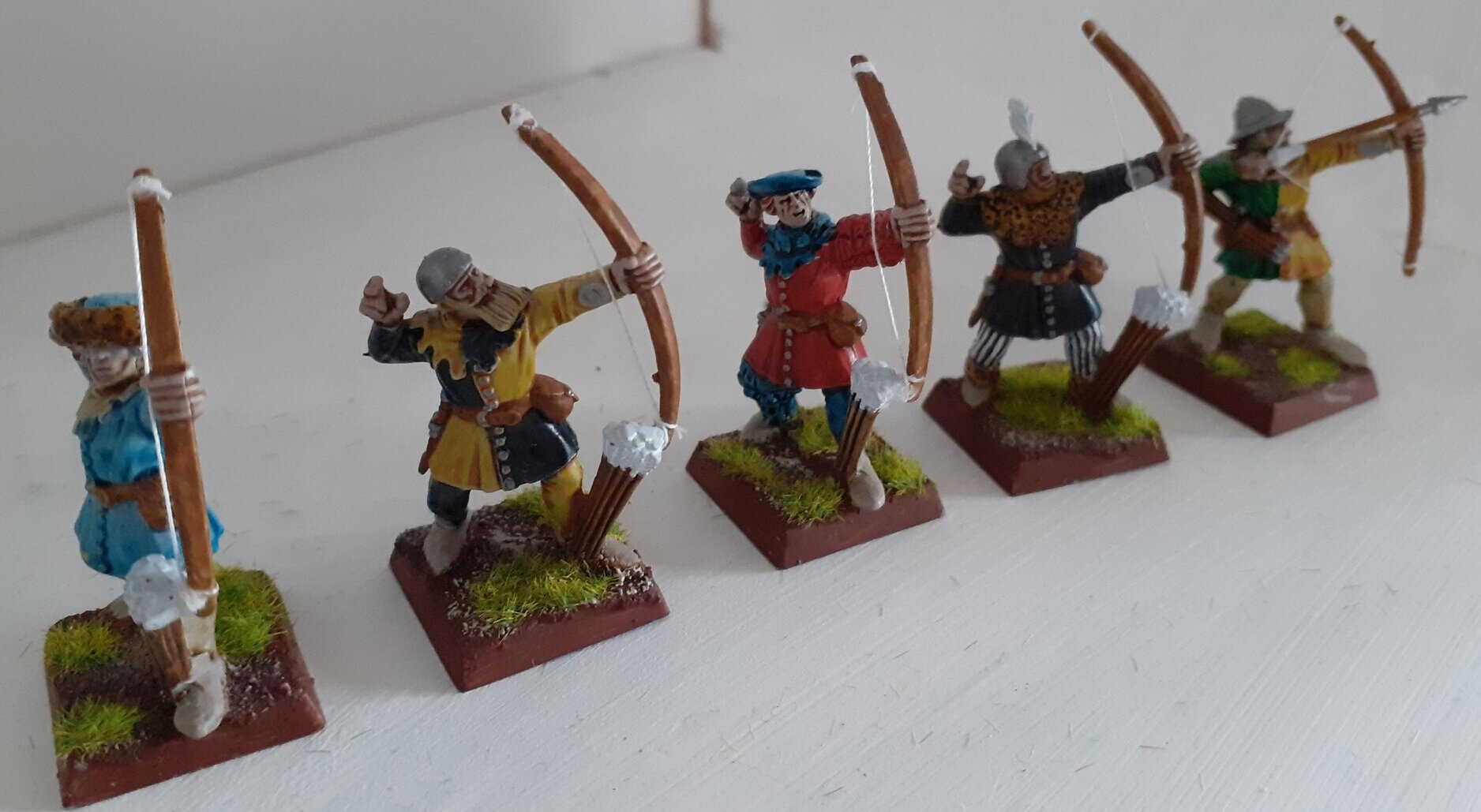 Anyway, enough of the riff raff, you likely want to hear about some of our enemies! Well there were a lot, and we'll cover them in more detail another time, but one I will tell you off. The drunks will tell you of rat-men, some vast empire living in our sewers, under our cities and towns. Well never listen to the drunks, thats why they are drunks! Beastmen, they are an enemy real enough. Those drunks just like making stories of some of the more odd looking mutants amongst those foul beasts. 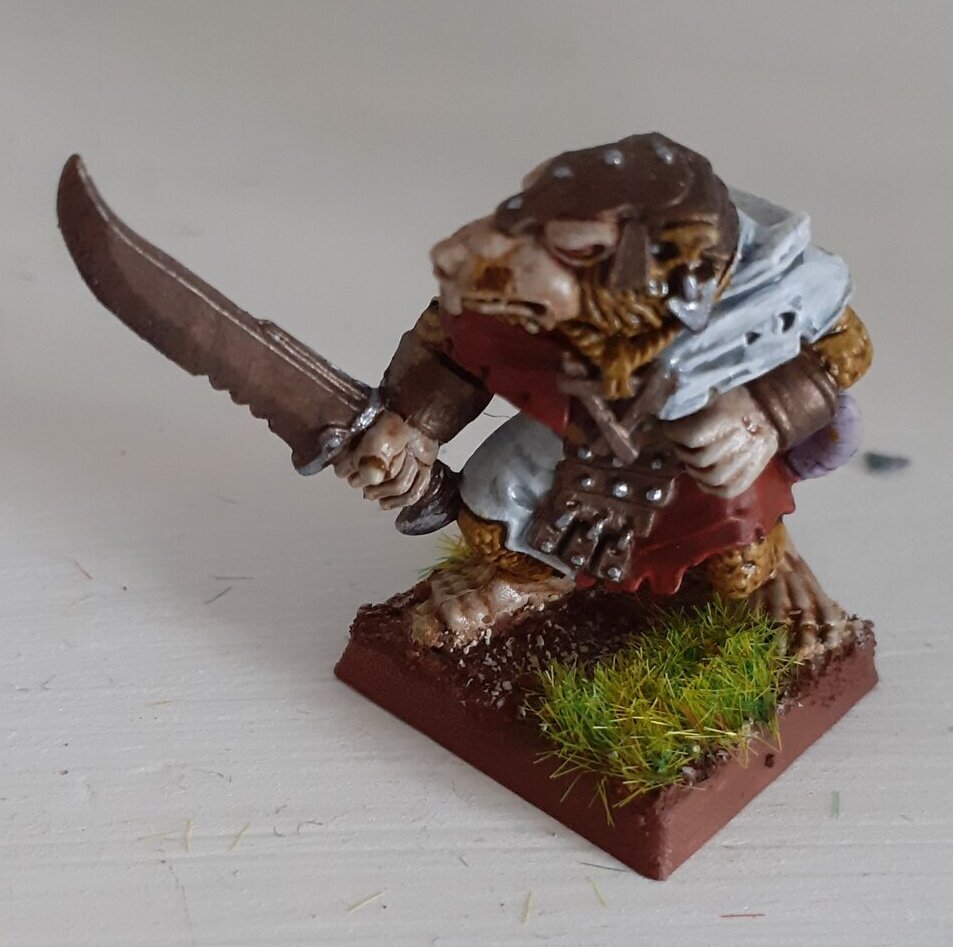 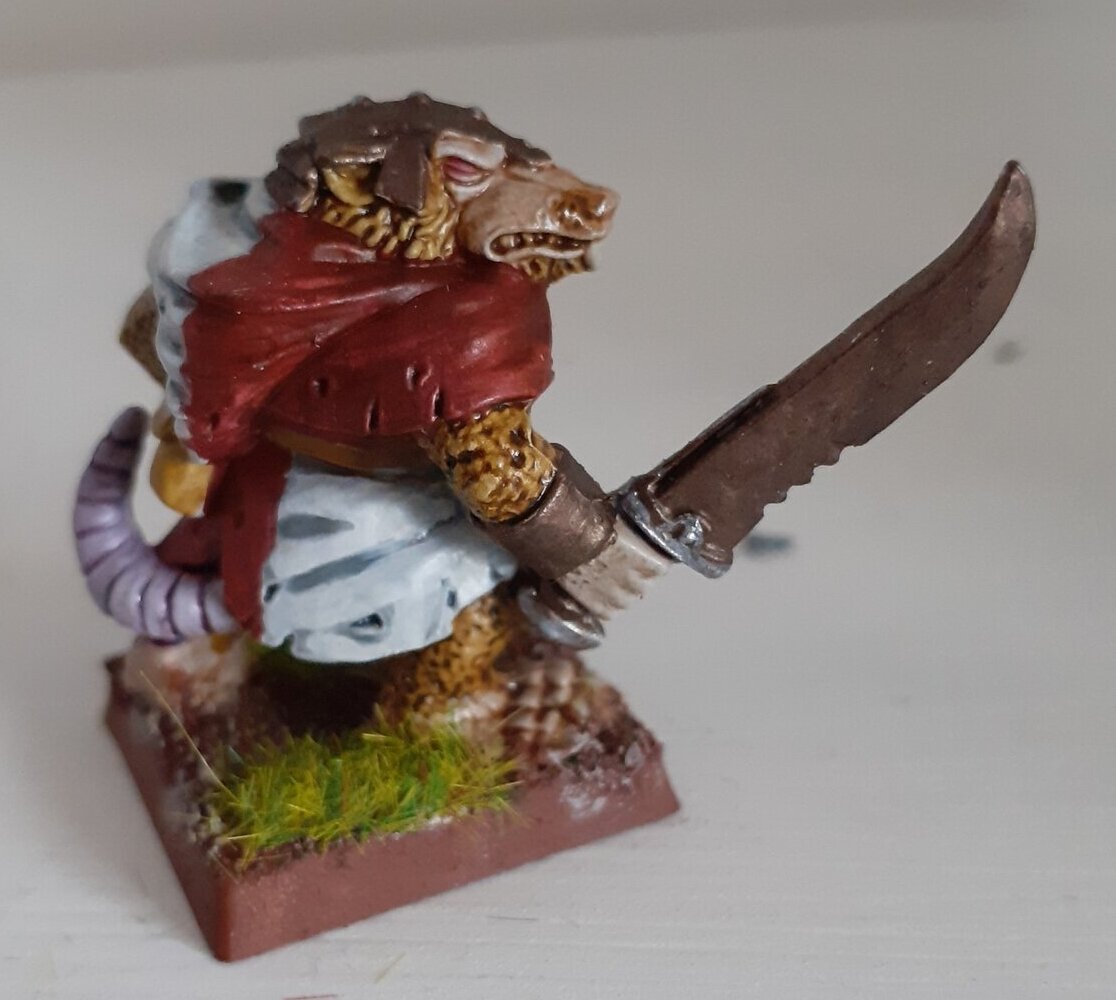 Bit of a scattered update today, finished all 10 archers for the ostermark colours, although I might revist and add bow strings in the future. The merc ones took a bit longer, had some fun converting them a tad more, and have already done their bowstrings. I have 5 more of them to do in the future too, so might wait til I've done them, then do all remaining bow strings at once.

Hope you like them all, any comments or critiscisms always welcome. more updates soon.​
Reactions: CaptainDangerous, Stoof, Crazy Ivan and 2 others

Have you got something that you could colour the bow strings with? They look too clean to my corrupted hive eye.
Reactions: spafe

I'll try giving them a sepia wash this evening see what they look like
Reactions: ClockworkOrange

That should do it.

Okay, I have been making progress, but sadly I keep adding to the growing tally. I've now added a tracker of how many models are at each stage. For the record, my total models for this army each month are: 276, 276, 330, 343, now 383. I did however manage to reach 300 complete models for this army, meaning there is only another 83 to go (assuming I dont find any more to add to it). More soon! 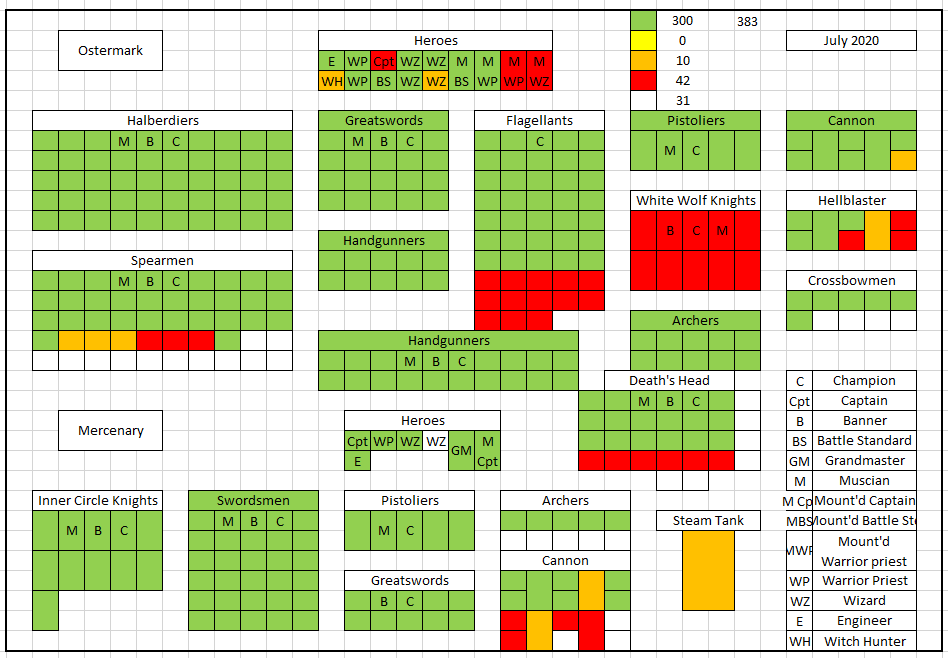 I stopped getting updates for some reason so I thought you'd stopped. Glad to see you haven't! Really liking the ogre and dwarfs mixed in with the regiment of spearmen? halberdiers? Are you going to just count him as 4 boys?
Reactions: spafe

halberdiers. But they are such a mishmash of weapons as they are the general populace drafted into serve the counts army. The more prosfessionally armed spearmen are hopefully going to be completed this month.

Yeah, he's just going to count 4 guys. It's mainly a place holder since regiments get so large in 8th so some fun stuff to mix into regiments really breaks up the monotony.

My aim for yesterday until the end of July is to average 1 model a day, so hopefully next time I put an update on it will have at least 33 more models finished.
Reactions: sedits and CaptainDangerous

OI! LEAVE HIM BE! C'mon now lad, you should know better than that. You two, yes, you! Give that man a hot meal and show him to the stables for him to bed down. If I find he's been bothered I'll hold ye to account. I'll take 'im up to the brothers in the morning.

So lad, wipe that look off ye face. War is hell, I've been trying to tell you that for sometime. It breaks men. That man deserves your help not your scorn. The Sigmar brothers will care for him, he's finished with fighting. But you must keep your wits about you, not all who are mind broken on the battlefield are peaceful like that one, some are so broken they become doomseekers, flagellants, men of Moor. These men will flock to battles, band together and fight with a frenzy not achievable by those of sane mind. Many a general has sent them away, not wanting to worry their army. However a canny general will send them a priest to guide them and keep them on the outskirts of camp. In battle they are capable and, as they seek out their own end, ultimatly disposable. There were plenty of these bands of touched men roving the East March, the constant assault on the province, not to mention the city of the damned sends many folk over the edge in that land. 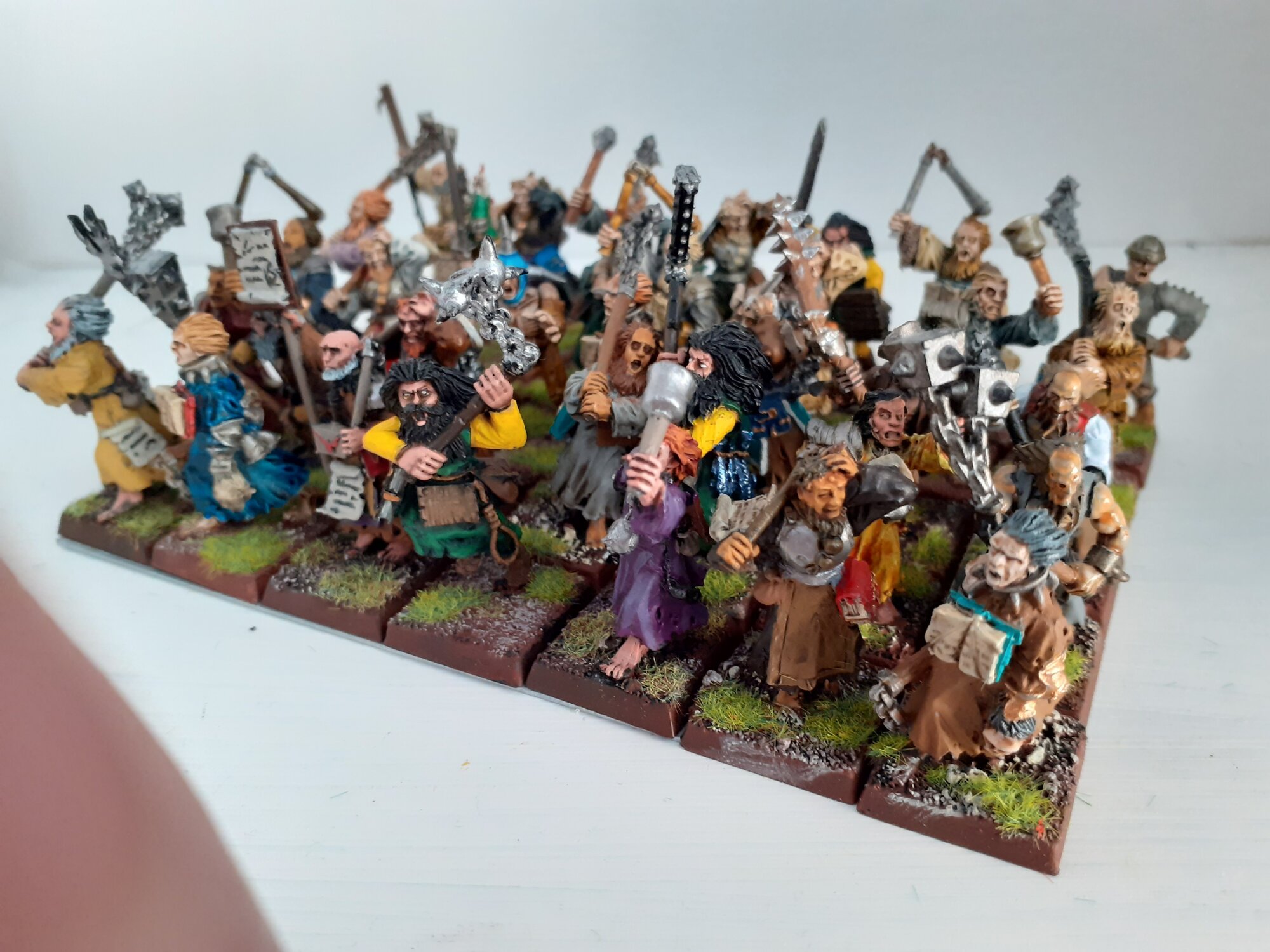 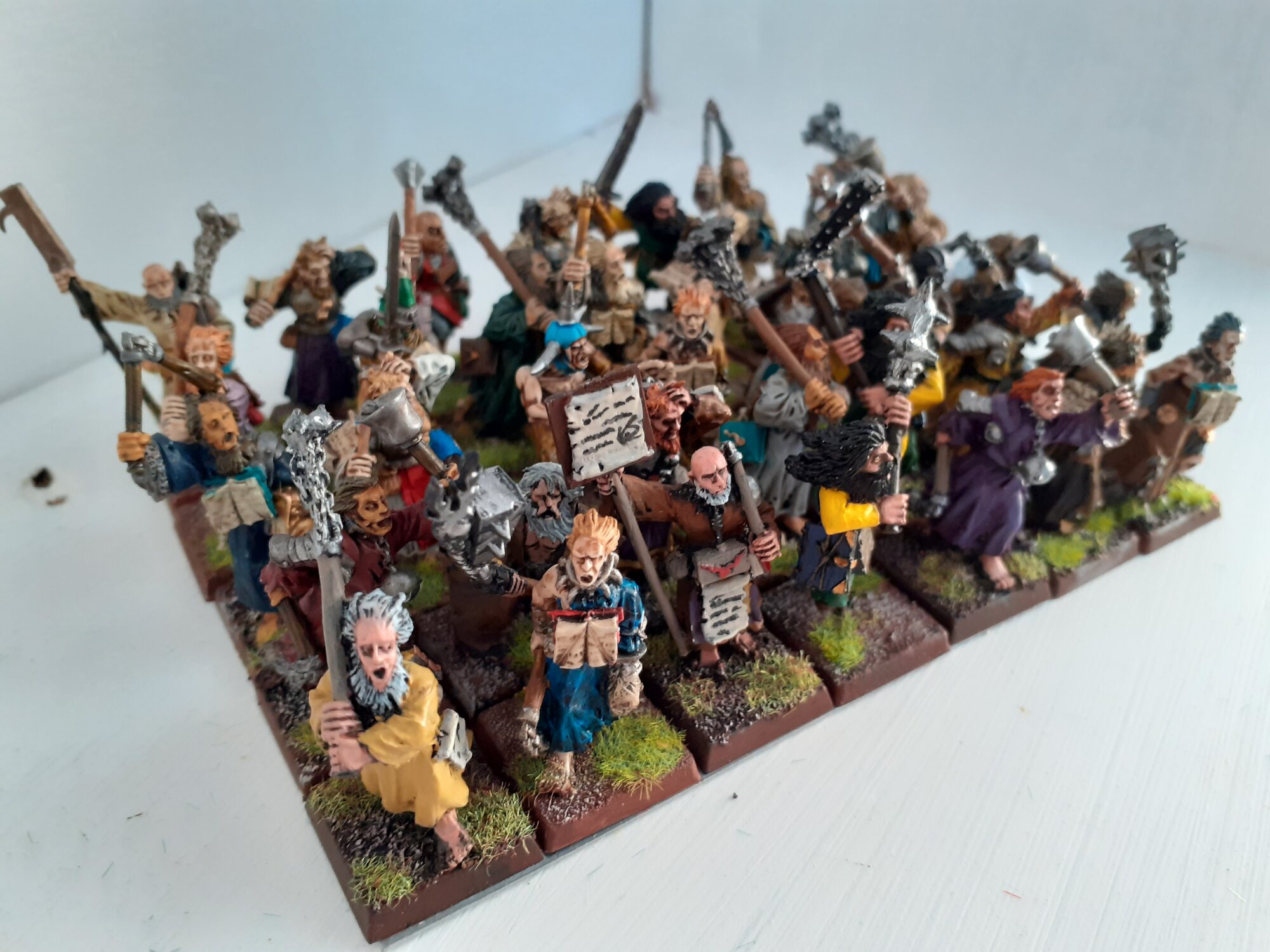 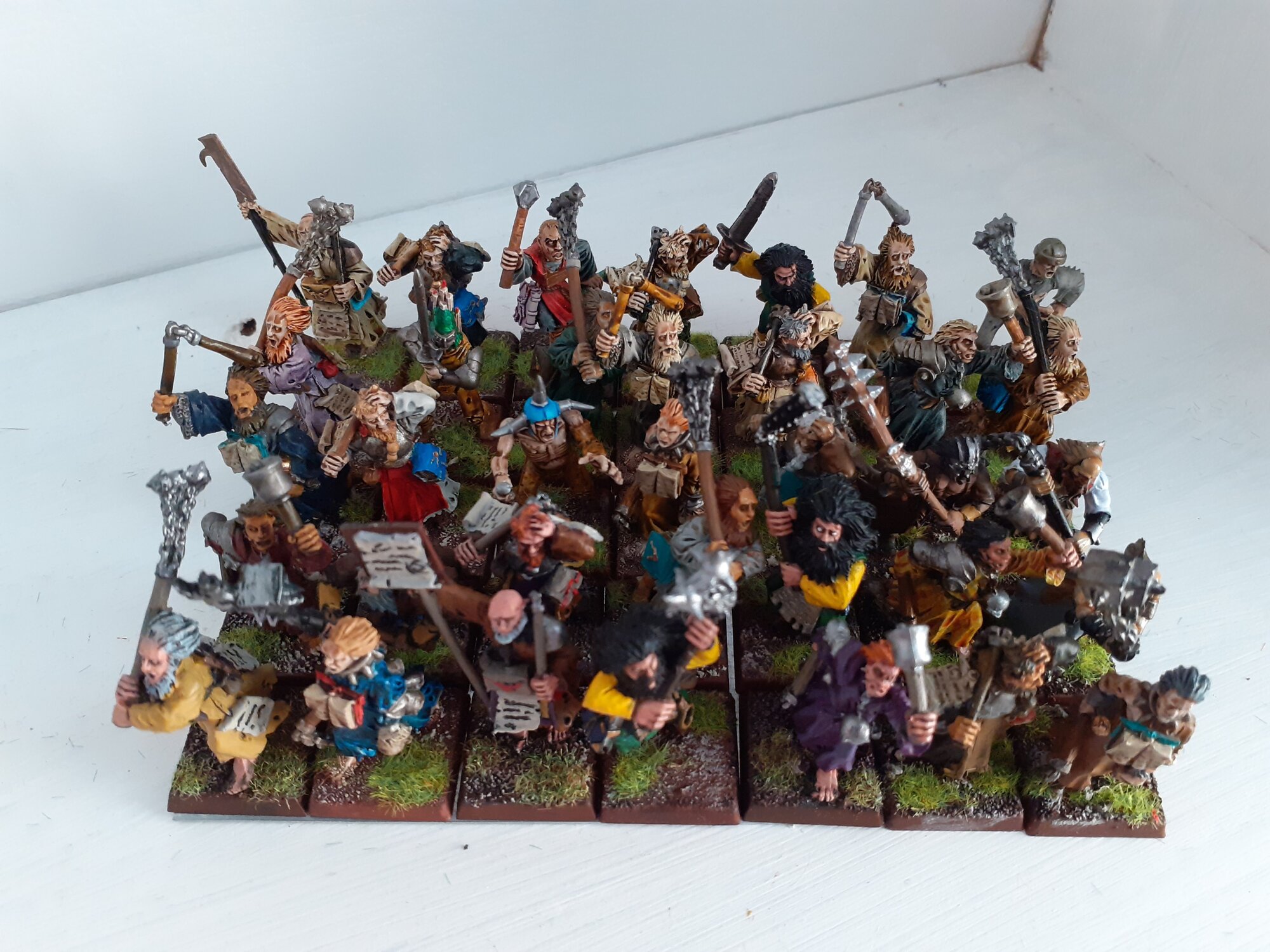 This is the first 35 finished, I have another 13 to polish of the mob. I really like the old metal ones (6th edition era I think), but they are also bulked out with newer plastic ones and some conversions using a mix of zombie, cawdor and empire parts. I go through phases of really really loving to paint these guys, and other times where they are a real chore. Hope you all like em!

I'll have the first 5 white wolf knights to show later this week, they will form a huge block of 15 knights when they are finished.​
Reactions: CaptainDangerous, sedits and MedMos
Show hidden low quality content
You must log in or register to reply here.
Share:
Link
Top Bottom