N17 Reach for the stars

So has been about two years since being away from the hobby (painting/modeling wise), but in that time have purchased Bloodbowl, N17 and Kingdom death (another great gem I have wanted for quiet some time).

I struggle to paint most of the miniatures I make and tend to just kit bash mini after mini. But after trolling sites like:
- Ironsleet
- Big boss red skullz
- Echoes of imperium
- WilhelMiniatures
and many more I have been inspired to paint up some of the minis I have sitting around.

One of the main reasons I find it hard to paint up my minis is that I hardly ever get the opportunity to play any actual games, also a very busy life schedule. But after playing Kingdom death with my Wife and then solo, I am going to try and develop a solo narative style campaign.

So the idea is to create a gaming board, if not to play on tp at least display some of my finished minis.

ATM I have started to paint my War boy/goliath gang members. 1 is complete and I will try and take some photos and upload him and the rest of the gang. On my work bench I also have a Astartes gang I have kit bashed using the human players from Bloodbowl, who need some greenstuffing and then are ready for paint. Looking through the GW1-3 books I am further inspired to make a few low level scums, Bounty hunters, hanger ons, etc to basically fill out the environment.

So let me introduce you to the setting..... 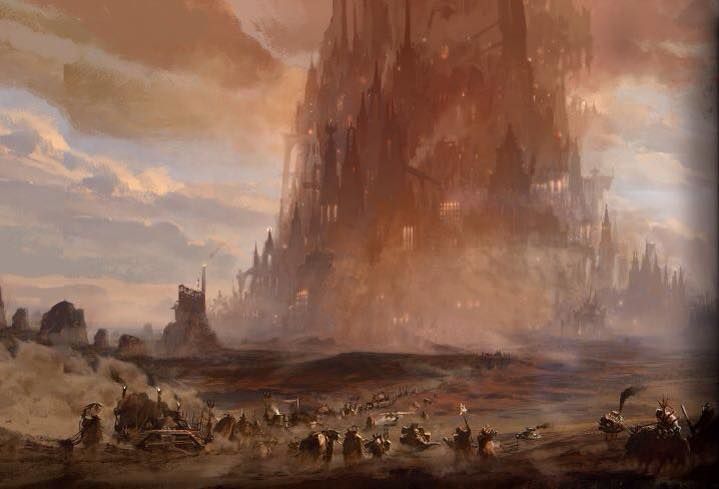 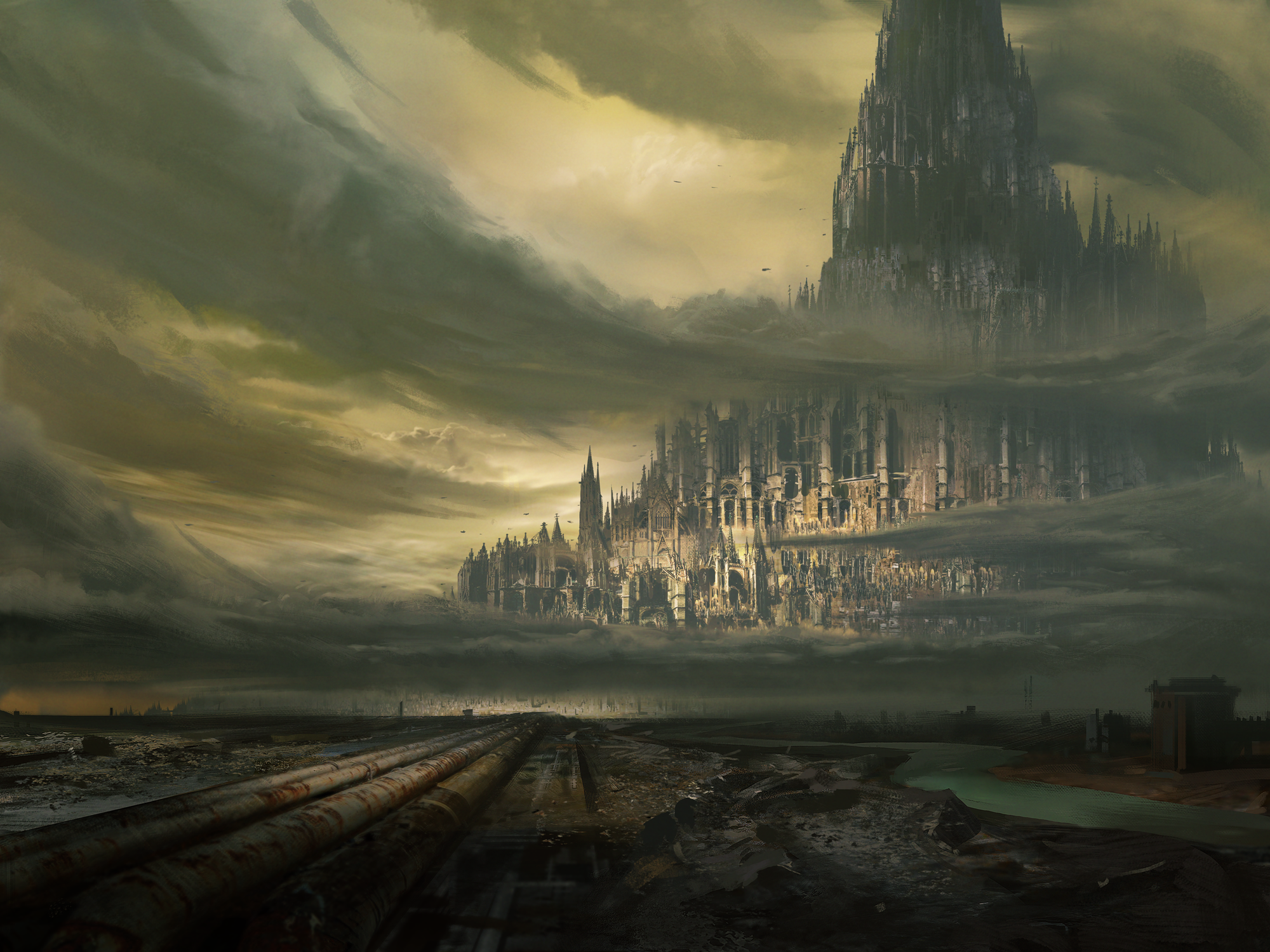 At the lowest level of the outside of huge spires on Necromunda there are numerous Shanties. Small and large makeshift buildings errected against and within the actual walls of the hive. Where the most unfortunate souls, mutants, outcasts, criminals, lowlifes and miscreants scrounge to make a living.

The Shanties are the fist line of defense against Ash waste Nomads, mutties and Scavies who attempt to enter the these Hives by any means. Especially while there are many entrances to the forgotten old factories, undercities and even the forbidden cities bellow each hive. Further, many High level Spire Gangs and Aficionados run Illegal Spook and other Drug factories and mines from the Shanties. More reason for constant attack from both within and without. Because of this Shanties are not exempt from the harsh reality of Gang warfare either, with Gangs fighting over turf, factories, mines, entrances and even disputing racing disagreements and outcomes. None of these are more vast than the Shanties of Hive Acropolis.


SO my plan is to build a forked Valley, with three entrances to the Hive. Dividing the inner City from the outer Ash wastes. The landscape will be a built up mountain like structure, built up from numerous ash storms, with hundereds of small shacks sprawled along the valley. With Towers, Air vents, Sludge pipes/tunnels and gantries/boardwalks surrounding the valley. The valley will open up to a flat open surface, room enough for if I ever get to making/purcahsing Vehicles (which I really wanty to do). 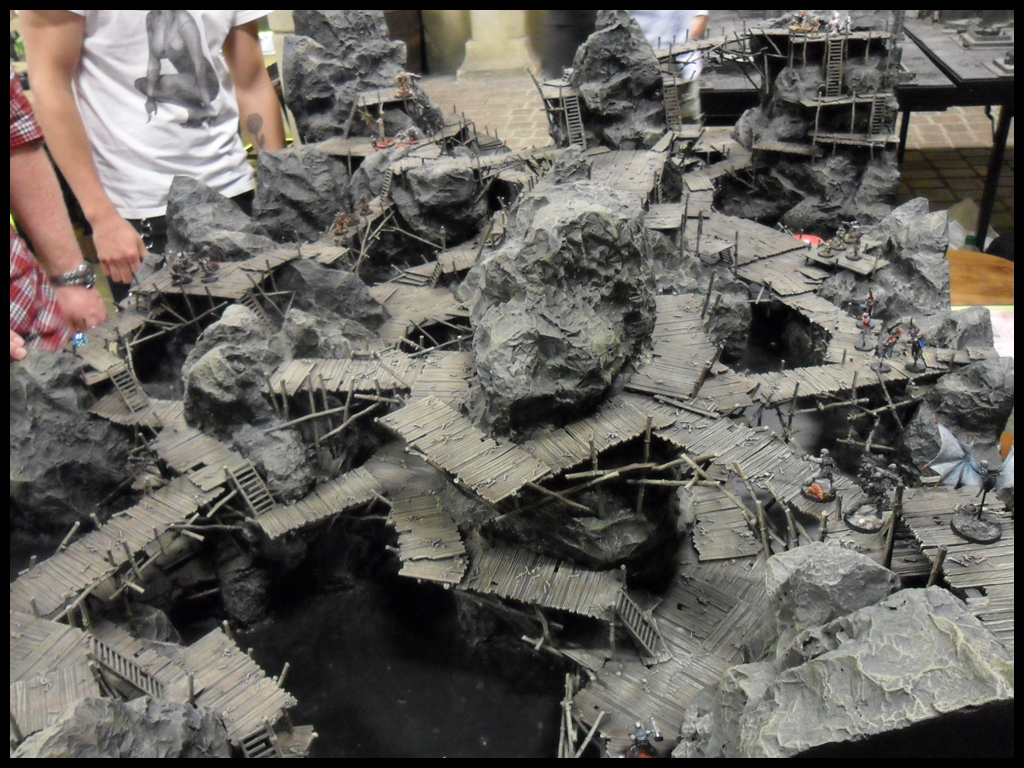 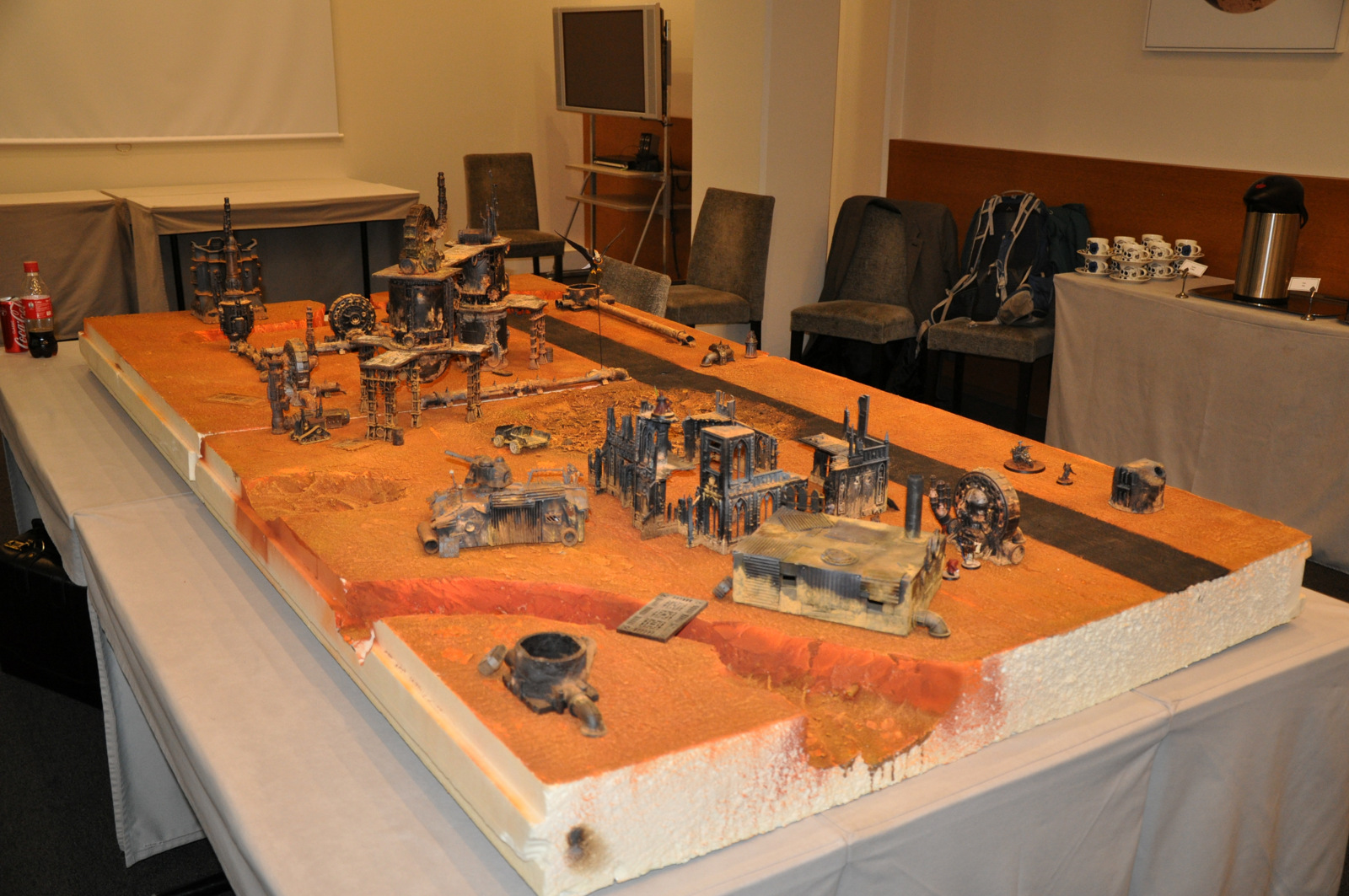 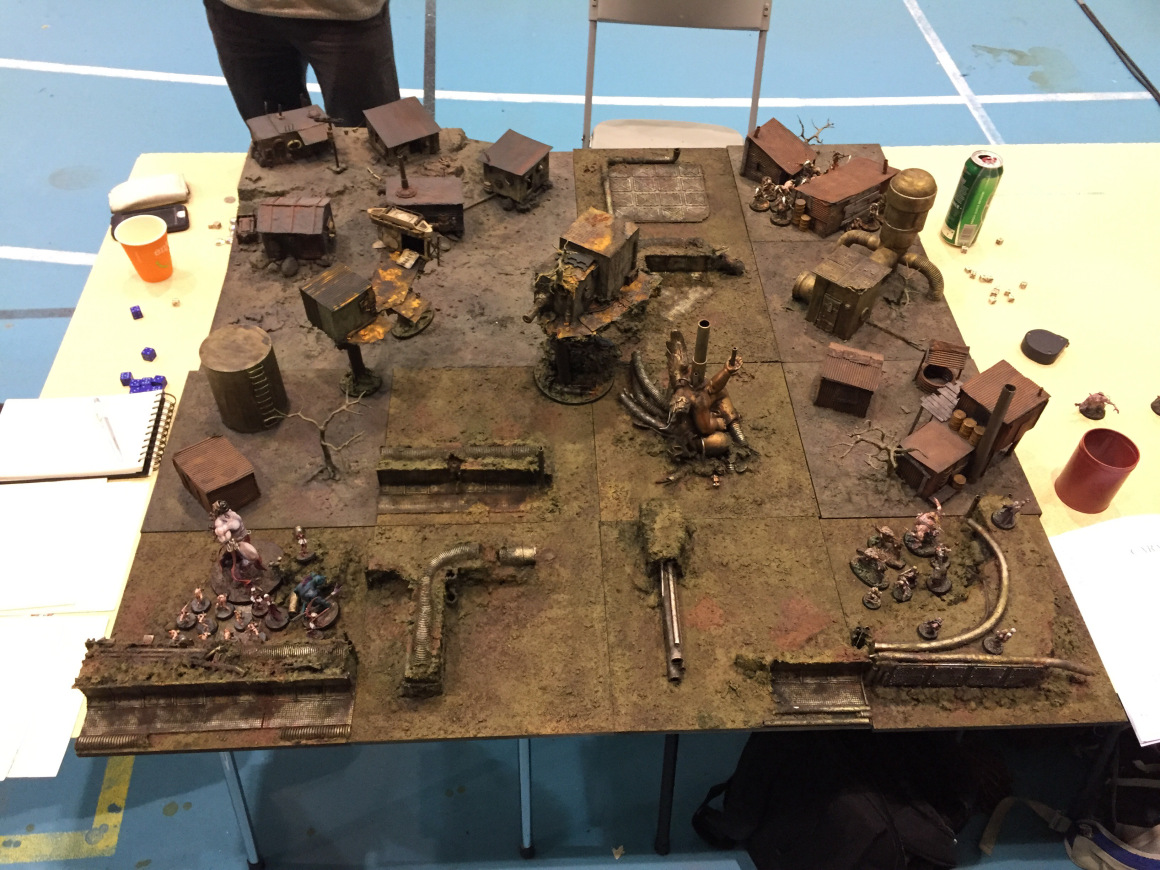 SO this PLOG will follow my Foray into building my first ever Terrain/gaming board, the development of the lowest scum of the Acropolis Hive "Reaching for the Stars" per say. The lowliest of the Hive making their employers happy by doing the smallest to largest of favours. It may take me some time. I will be trying out completely new ideas creating this terrain (as I never have before) but come along for the ride.

Welcome to the Tribe - I hope to see this project progress into something that matches your imagination.

Welcome to Yaktribe, it is a silly place, and hoo boy yeah I wanna see more of this kind of thing
Reactions: CaptainDangerous, Sethmerlin666 and Deleted member 10658

Thank you all for the kind words.

Hopefully I can see it through!!!

SO as promised some images of what I am working on atm. Long post inbound.

First one was a test model, "Jigsaw" Champion with Renderizer axe and Stub Pistol. Going for the Warboy (Mad Max) look, with Goliath Rules for if I ever get to play a game/campaign. Nearly completed just maybe some final touches like the blacks of his eyes and highlights. Poor Photos from my Iphone. 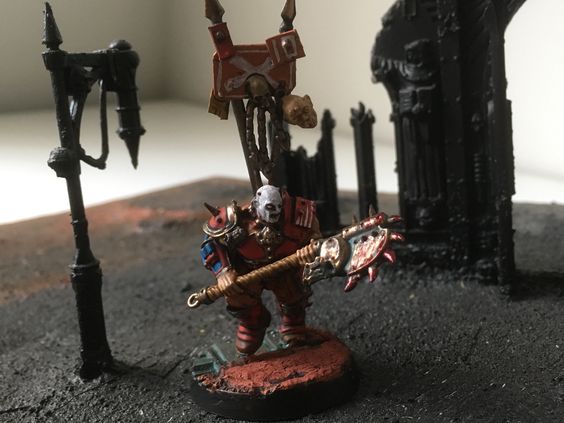 Second image is Jigsaw (again), with Kruger (grenade launcher) and Grendall Gor (what was to be the boss, with Stubgun and Power hammer, but looks to similar to the boss out of the box IMO). Both not yet finished. 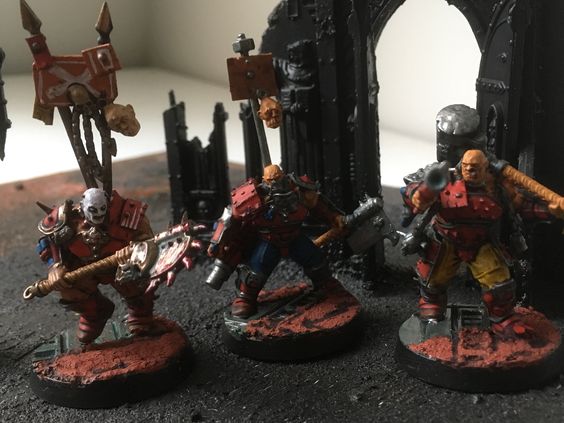 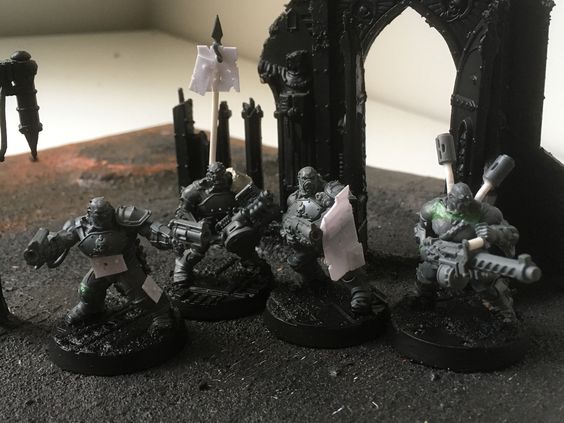 Now I had this guy sitting on my workbench from a previous build that I never finished, so I got out the knife and did some alterations. From this: 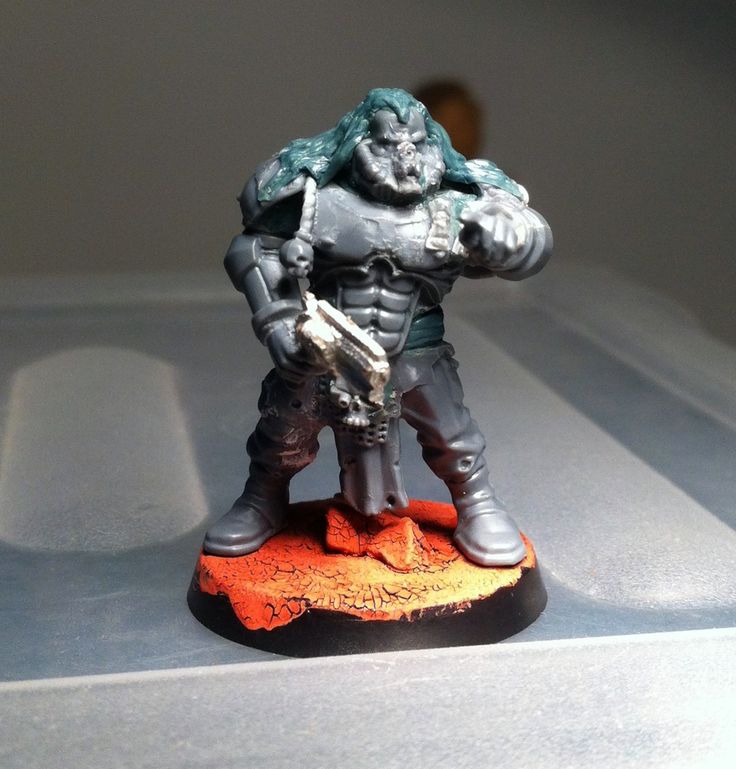 To now this:
The new WarLiath Boss, (Power Claw/fist whatever works once I look at the GW2-3 Rules for it, with Autopistol) the other hand I have an idea for a power maul using a blight knight weapon and bits from an ork kit I have, Thinking of giving him a Shot gun as well from the ork kit, for some long range. 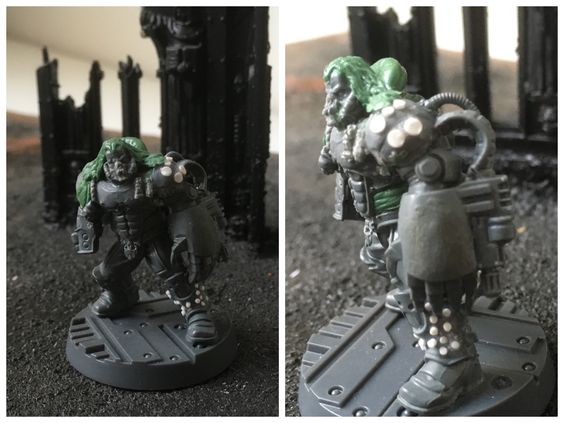 In between paining I couldn't help myself and started to convert up my Arbites squad. ATM it is a 4 man squad and a hound, but have also started on a 5th man (with Grenade launcher). They all have helmets strapped to their backs. Leader with Auto Shotgun and Power fist, 1 with Heavy Boltgun + Rig, 1 with Power maul and bolt pistol, and 1 with Combat shotgun. 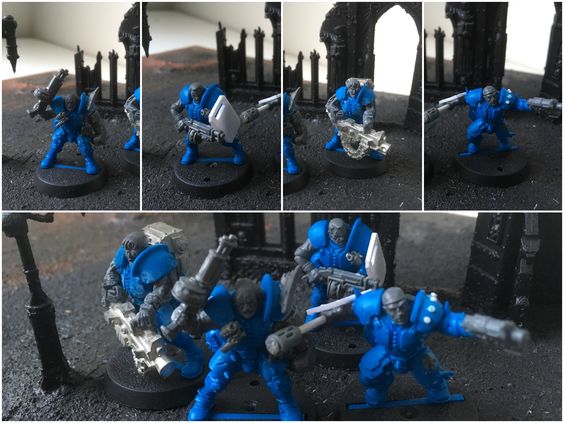 And lastly a sketch or basic plan (sorry it is on its side) of what I want my terrain to be set out like (what I plan to make in a few weeks when I am on Holidays and have some free time). I am thinking of making the West shanties more of a sheer cliff/Rock face similar to say a limestone quarry with shanties built up it. Tiles 4,5,6,7,8,9 will have more free space were I will eventually build some scatter terrain, cliffs, mountain spires and watch towers (more like obstacles) for the idea of eventually allowing Vehicular combat. 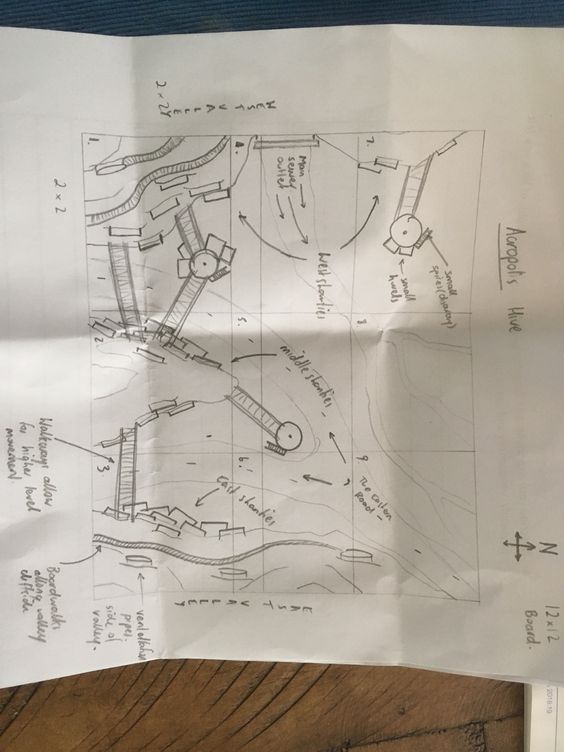 So once again sorry for the long post, as you can maybe tell I have a lot of ideas running through my head atm, also have my Escher and an Idea for a Scavvie/Muttie/Ashwaste raiders gang which will require a lot more converting and GS. I didn't get a chance to paint anything all weekend though. So hopefully find some time this week.

Let me know what you think.
Reactions: Deleted member 10658, CaptainDangerous, Loriel and 9 others
B

PEBB18 said:
They all have helmets strapped to their backs.
Click to expand...

Well, at least those helmets will be some use if they get shot in the back

Nice work. I particularly like Jigsaw. A lot of the N17 stuff looks samey now, but he stands out as different.

Thanks Ben_S. Ha yeah don't try no tricky shit, sneaking up behind them and shooting them in the back that's for sure!!!

I do agree some of the N17 stuff is getting repetitive, but have to say the new models are awesome and allow for so much possibility.

PEBB18 said:
Hopefully I can see it through!!!
Click to expand...

Well, you are off to a good start. 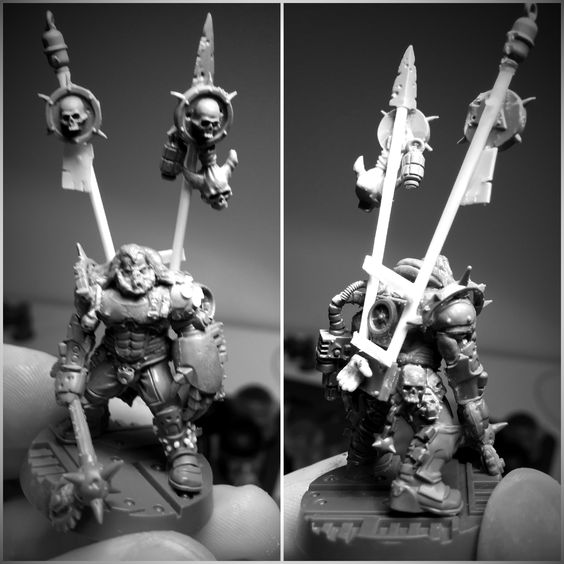 Armed with a Power Fist and attached Autopistol and some form of hand weapon. He likes collecting Skulls.

For my terrain I am thinking of using cardboard to make a number of Shanty shacks, that will be built up on the side of each of the cliffs. With Ramps and gantries intertwined and linking them. Allowing for a lot of vertical terrain.
Something like this comes to mind. 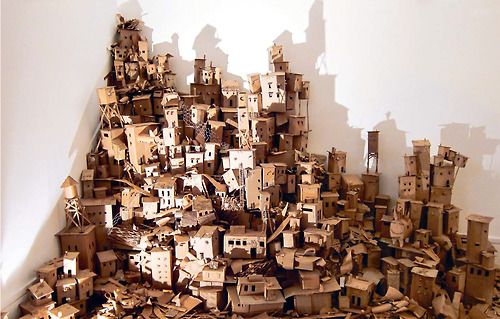 Any ideas what cardboard I would likely need to use? Also was looking into terrain Doors and Grates earlier to add for a more post apocalyptic/scifi Hive city feel, does anyone know of any good sellers of terrain accessories?
Reactions: Deleted member 10658, CaptainDangerous, Aulenback and 6 others

I also have the original model of this sitting on my work bench. 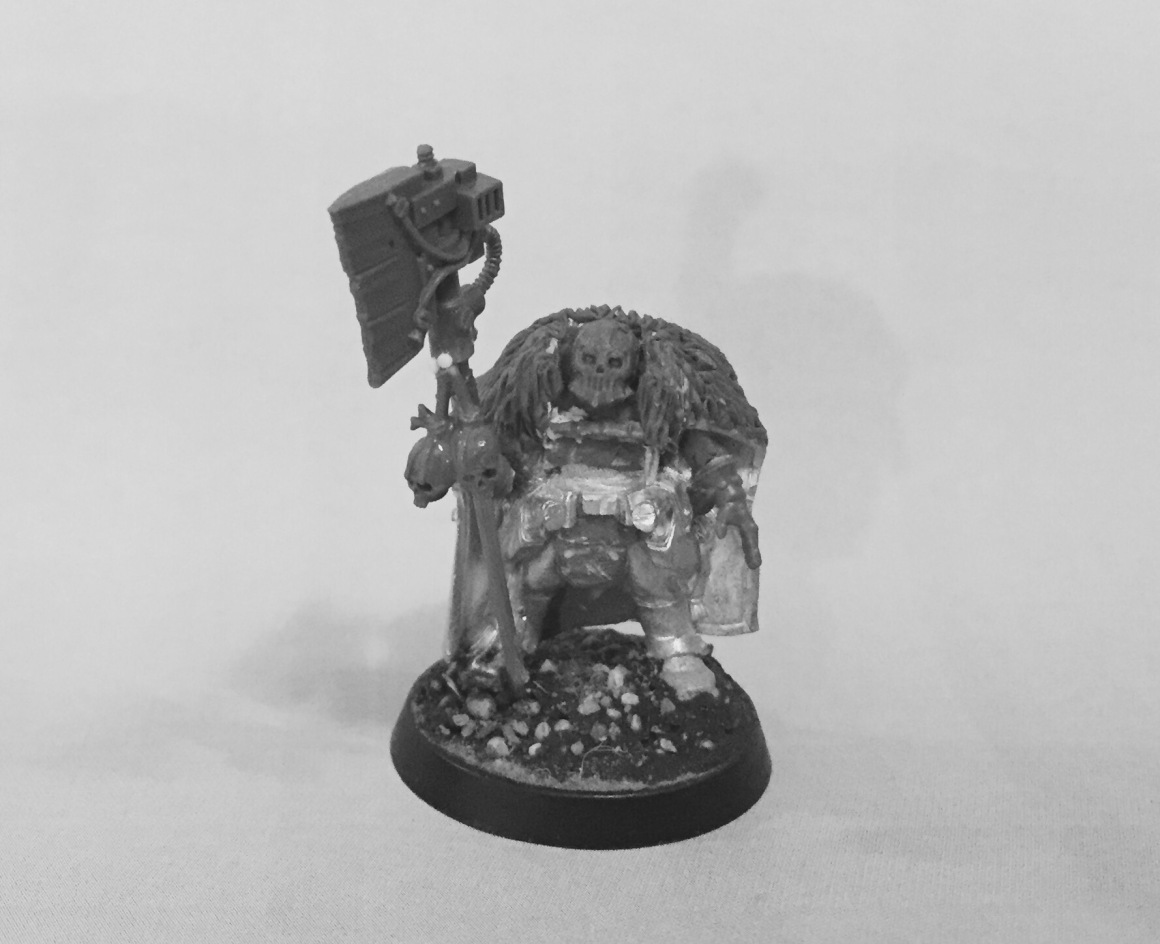 Just don't know if to make him an ash waste nomad or a mutant Scavie Leader.

The Nomad would likely have a long rifle or Spear/pole of some kind with a Chaos sheild as a helm to cover from the toxic waste. The mutie uncertain yet.
Reactions: Deleted member 10658, CaptainDangerous, Ned Noodle and 2 others

I never though of doing the Underhive in a favela style. That could really work, especially on the economy of materials, favelas are as shanty as shanty can get, cardboard will be perfect, especially to peel off a layer and have the corrugated tin look here and there

THIS IS MY AXE!

Where is that favela model from ?

THIS IS MY AXE!

Ha its not my axe but that model is on https://bigbossredskullz.com/category/vortapt-iv/page/2/ His Blog is inspiring.

Where is that favela model from ?

I don't know, searched cardboard cities on google and pinterest. But want to try and make something similar with Gantries and Boardwalks.

cainex1 - I plan to have 4 say cliffsides filled with these buildings built on top of each other, with pillars, barrels, rails, gantries, grating etc for extra cover and to allow movement between levels and from one cliffside to the other. The central Cliff I want to include maybe 1 or 2 Large Tunnels as access from the West to East Valley. I think the cardboard can suffice with additional scifi doors/grates/ladders/cabling and plaster weathering where layers of ash waste have accumulated over the years.

I just picture these would be like the shanties at the bottom of the hive built at the base to a certain height, each Ash storm the inhabitants seek shelter, brace for the worst and then once it passes make new hovels or break open the doors and clean out the vents. Other less fortunate are buried alive.

Also there would be many sewer exit points that drain the waste of the hive out to the Ash waste.
Reactions: Pie Vendor and Gdolkin

Oh, on the outside! I didn't get that, it will be absolutely perfect for the near hive stuff.

it would also work as a town climbing up the side of a partially collapsed dome.
Show hidden low quality content
You must log in or register to reply here.

U
Transporting The Underhive

W
Anyone have any experience in making and/or finding ready made rifle scabbards?