The purpose of this thread is to identify what is what and what looks best for it.
I've done what I could to bring everything together from official concepts or licensed stuff so here we go. 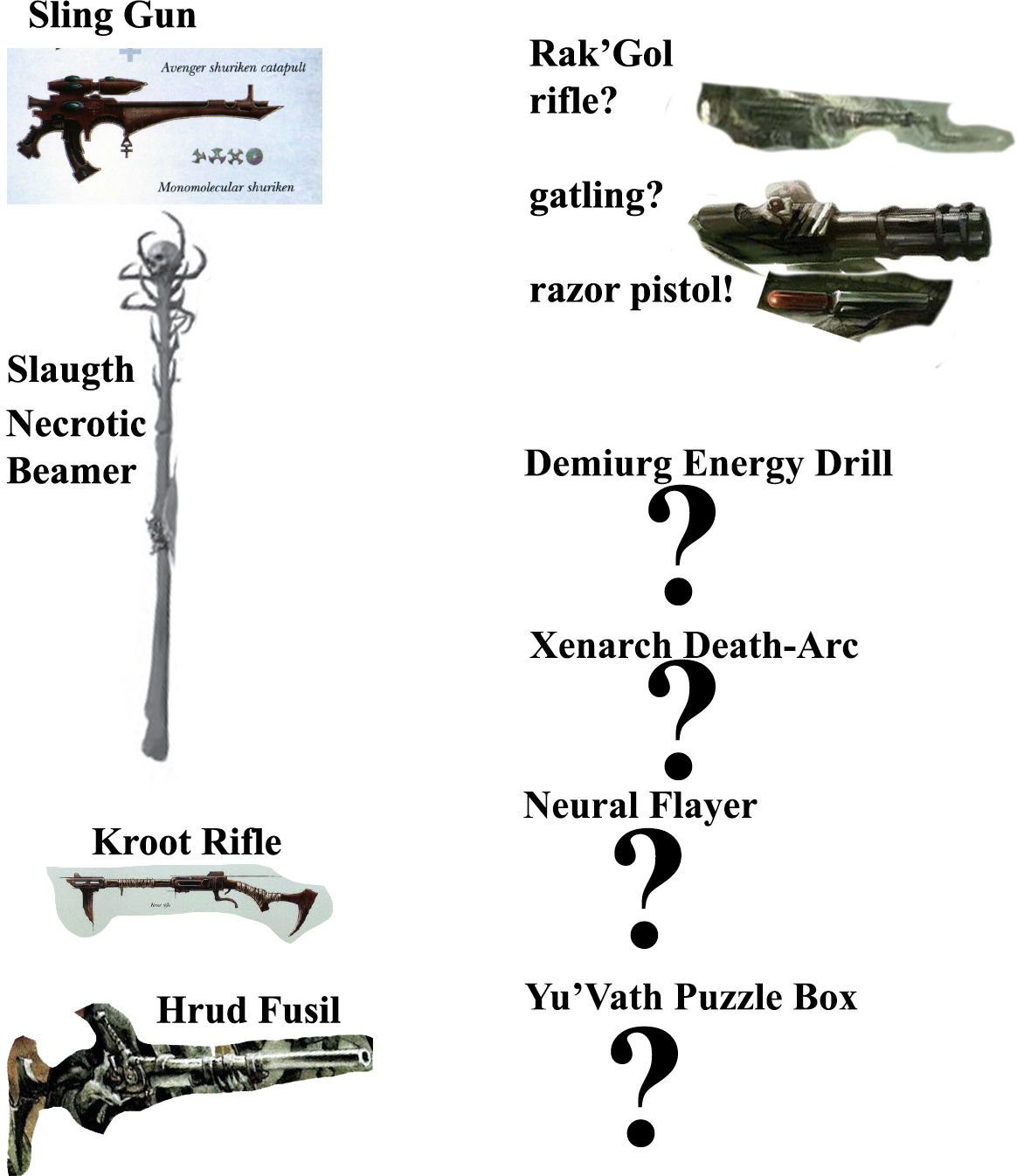 None fall into the pistol category so the razor pistol is a no-go obviously but I wanted to include it because it's the only officially named weapon for Rak Gol. They have some kind of cyber axe and chain sword arm but that's of no value to this conversation. At least the pistol gives me an idea where to begin.
The Necrotic Beamer is essentially any lich's staff so thats going to be nothing to do for anyone.
The only art for anything Demiurg is a rough sketch from Jes, one weird looking survey tool and either 2 or 3 ship designs.. so I'm open to any ideas.
The Xenarch Death-Arc is mentioned in some FFG game as a rifle sized thing but thats about it aside from an image of one weird piece of tech that looks like a Baroque Google Glass
And the Yu Vath are either some king of energy being or mish mash construct from what I can gather so I'm just thinking go Hellraiser with it

So, anyone got any answers and did I screw something up terribly here?

Update based on info from the invaluable @Punktaku 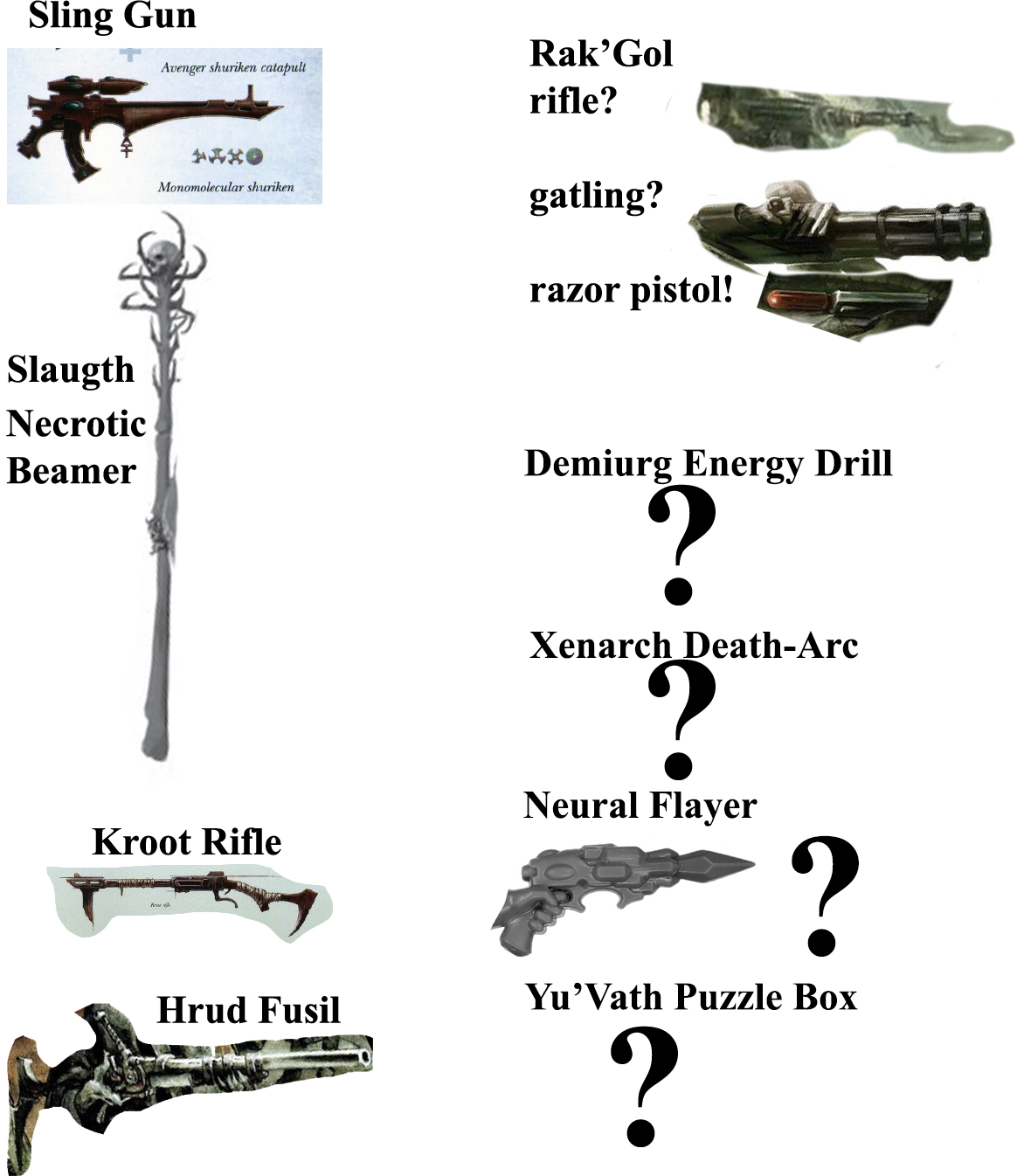 What is this about?
R

Pretty sure the new book has a set of illegal xeno weapons, the ones on the picture were mentioned in the live stream.
Reactions: TopsyKretts and Aulenback

reough said:
Pretty sure the new book has a set of illegal xeno weapons, the ones on the picture were mentioned in the live stream.
Click to expand...

Exactly right. I'm trying to put the gear to it's official model or art, provided such a thing actually exists.
Reactions: Paupoi
M

For some reaosn I have in my head that the death arc is a crystalline weapon. Not idea where that comes from.

Based on stats although it doesn't have the side arm trait i would have it down as the shruken pistol not the "rifle" but that's just me.

I don't know anything but Imperial tech so if the statline is more pistol than that's what I'll use. It is completely understandable that a human wouldn't know how to use an Eldar pistol properly.
Reactions: Ml2sjw
M

It's more that it makes it a simpler modelling option aswell when you don't have to carve out a hand to fit/ have them single handing an assault rifle...

Well, this is me. So fiddly, tedious modeling is totally what I do but I think either would work because they're much closer in scale than bolters and las weapons.
Reactions: TopsyKretts

Demiurg’s are essentially space dwarfs that are allied to the Tau.

They are the source of the Tau’s ion technology so it’s plausible that their energy drill looks like an ion cannon.
Reactions: cainex1 and Ml2sjw

could the “razor pistol” be a Dark Eldar splinter pistol? or have the DE been retconned away from Splinter weapons?

any chance some of those weapons could be unique? the xerach death arc name makes me think of Maugham-Ra’s scythe-shuriken cannon combo.

I would say maybe but they are specific on the race.
The funny thing is they attached to race name to the stuff thats harder to get.

it’s just Xerach is awful close to Exarch. so...

Ml2sjw said:
For some reaosn I have in my head that the death arc is a crystalline weapon. Not idea where that comes from.

Based on stats although it doesn't have the side arm trait i would have it down as the shruken pistol not the "rifle" but that's just me.
Click to expand...

From the book: "A relic of the Xenarch strain of the Galactic Northern Rim, the Death-arc is a potent energy weapon. What makes it so effective is its cyclonic charge cells that generate prodigious amounts of energy, and even replenish the weapon's stores as it unleashes a storm of electrical death upon the wielder's enemies."

It is classed as a close combat weapon with melee, plentiful, rapid fire (2), shock, and versatile. So effectively it is a handheld device containing a perpetual energy source in the form of a never-ending storm, and it can fire chain lightning blasts at a short range (5").
Reactions: BearsWillEatYou and Paupoi
K

My copy came today, and I was laughing like a lunatic the whole way through the new equipment/wargear section.

There were *SO* many players who hated the new ruleset for giving gangers Tactical Marine-tier equipment... I wonder how they feel now that a fighter can out-gear, like, a Chapter Master.
Reactions: Thorgor, Paupoi, TopsyKretts and 1 other person

An inquisitor would be green with envy ad everything a ganger with means can access now. You can ALMOST build a Spyrer out of whats available.
Reactions: Ml2sjw
M

I like it personally, adding variety and chaos (with a small c) to the game and the setting for me it's better seen as parallel universe like blood bowl with the old-world on Warhammer. But hey also watch out for the can of worms....

I'm thinking if in a perpetual type campaign all costs need to be increased and or rare values to increase reputation needs. All this stuff is super cool but way too cheap and accessible unless playing very short campaigns...
Reactions: TopsyKretts and Ml2sjw
M

Yeah like it or not they have a specific campaign length in mind when they designed N18 and it was a short burn, splinter gangs and the like reset it whilst keeping some of your "characters" I still haven't played full campaigns as time factors mean I have mostly been skirmishing but I think then "aim" is an almost role play story arc where you one of your juves advances over several campaigns until they are leading their own gang. If this is possible I don't know but the grand scheme is a nice idea
Reactions: Vonvilkee

Don't you think these weapons are totally out of setting?
Will be OK for a campaign based on off world exploration or in the Eye of selene, even as some exotic equiptment of a very special character
But for sale in the underhive?
Show hidden low quality content
You must log in or register to reply here.
Share:
Link
Top Bottom