I've been putting together a new inquisimunda campaign and I made a newsletter to keep track of the progress on it, as well as having a space to record battle reports later on. This is my first 28mm scale campaign I've done in a quite a while, having mostly been doing 6mm scale stuff for the past few years- Inq6 & micromunda! This is a continuation of the same lore/background we've been using for our 6mm scale campaigns.

Our campaigns are not set on Necromunda, but rather on our own campaign world of 'Gorgades', but thanks to some warp shenanigans, much of what is local to Necromunda is able to bleed through the realities and into our own hive world, so there are many, many similarities between the worlds (Ie: a lot of lore breaking will occur and this stops anyone (else) complaining!). My previous Inq6/28 stuff has been very 'Grim-serious' but this time I'm taking a lot more relaxed approach and there will be a lot more (god awful) easter eggs and nerdy references and way more (god awful) humour scattered throughout the campaign. (I couldn't face another grimdark campaign right now, having been stuck at home for months & months)

I discovered the Sump City radio podcast this week and after listening to the first two episodes, I was enjoying it so much that I was able to finish off the first newsletter with some of their community page adverts/posters!

So here is Volume 1.1 of the 'Gorgades Gazette': 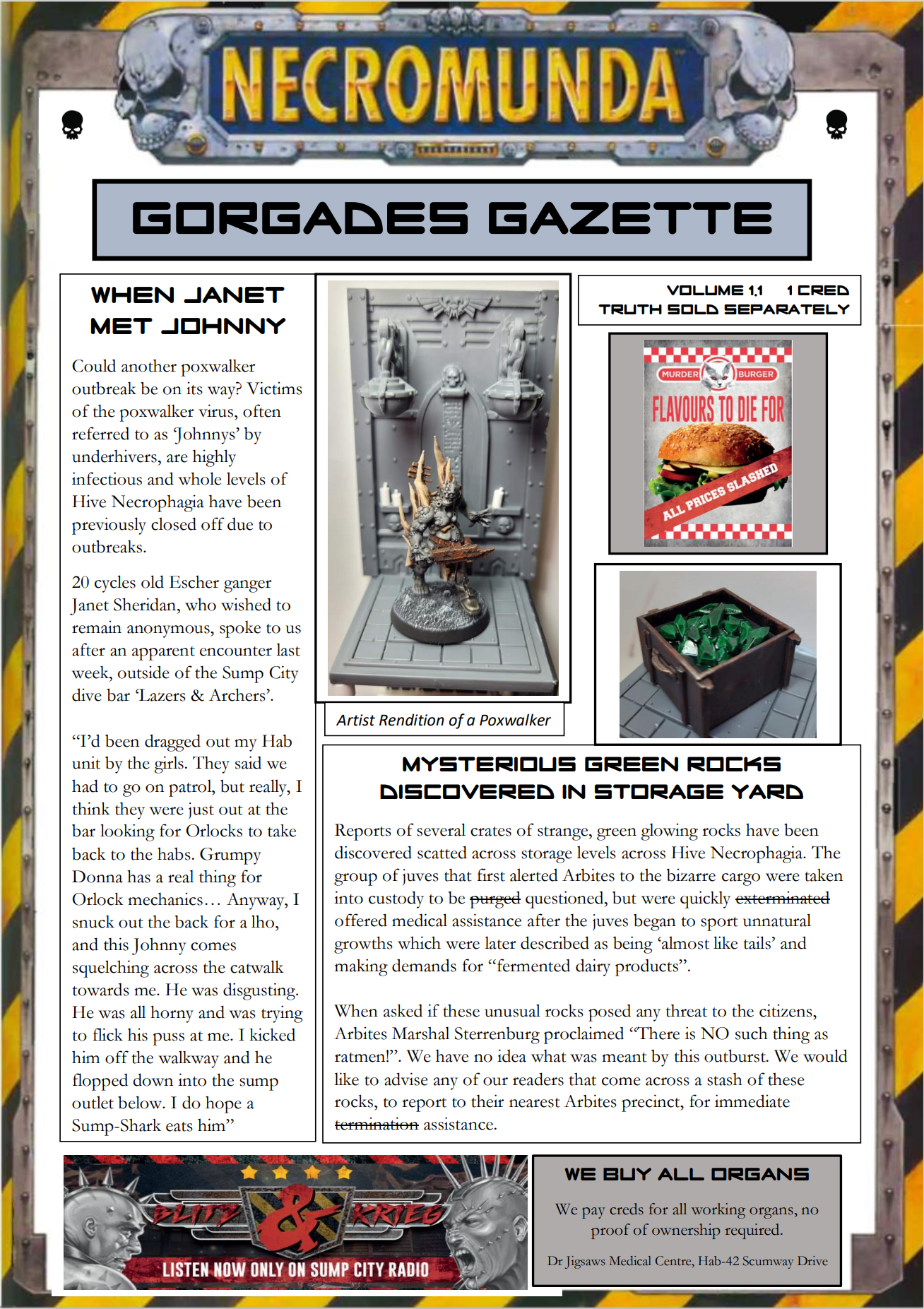 Promising start, always happy to welcome another storyteller to the 'tribe! Will there also be picturesof gangs and terrain? Because if it's mostly newsletters and battle reports, you might want to consider moving this to the campaign section?
Anyway, watching with interest!
R

MedMos said:
Promising start, always happy to welcome another storyteller to the 'tribe! Will there also be picturesof gangs and terrain? Because if it's mostly newsletters and battle reports, you might want to consider moving this to the campaign section?
Anyway, watching with interest!
Click to expand...

Sorry for the very late reply, but Thanks! I kind of packed the hobby up for a while as I finished my degree and got settled into my new job, all from home still, 17 months pretty much stuck in except for a handful of times so painting took a huge backseat for a while!

So in answer to your question- these newsletters here are just a fun way for keeping my group informed at what I get painted each update. As the resident painter I've a lot of backlog to get through but it also means I get to build the table of my dreams! The newsletters here are just a fancy way of being able to post WIP or finished bits to the group chat (especially since live gaming has been on hold for so long now!) mixed with a little more narrative than I'd usually get away with posting!

Battle reps and the like will get their own individual newsletters! (and popped into the other section!)

Update time! I got a bit more work done on various bits before RL break took over. Also got some great deals from trade pages, amongst them some classic Orlocks & Scum to strip and give some new life too! I also didn't stop buying terrain during the painting downtime, so I've got a lot to catch up with!

Volume 1.2 and 1.3.1 of the Gorgades Gazette were completed a couple of months back! 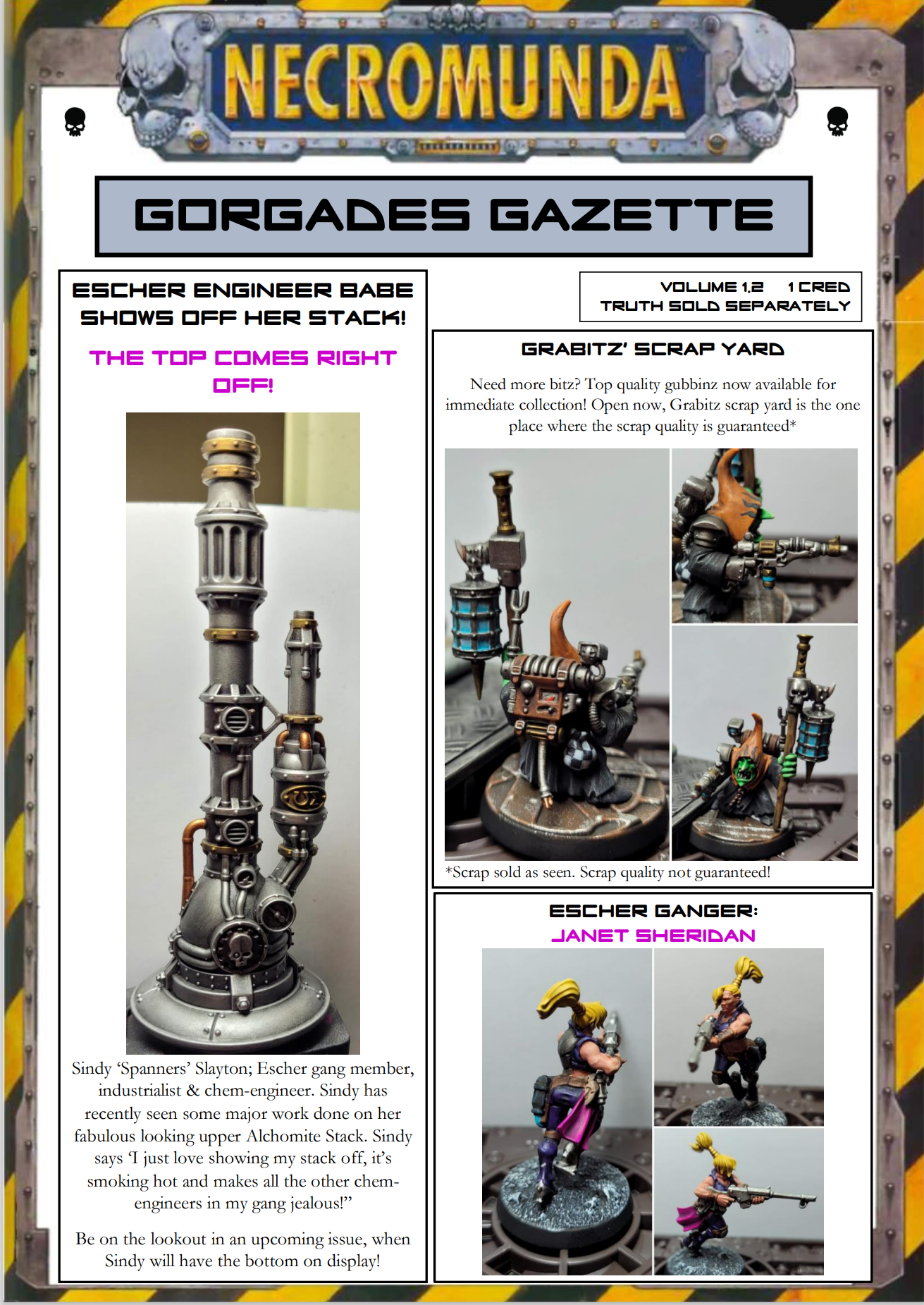 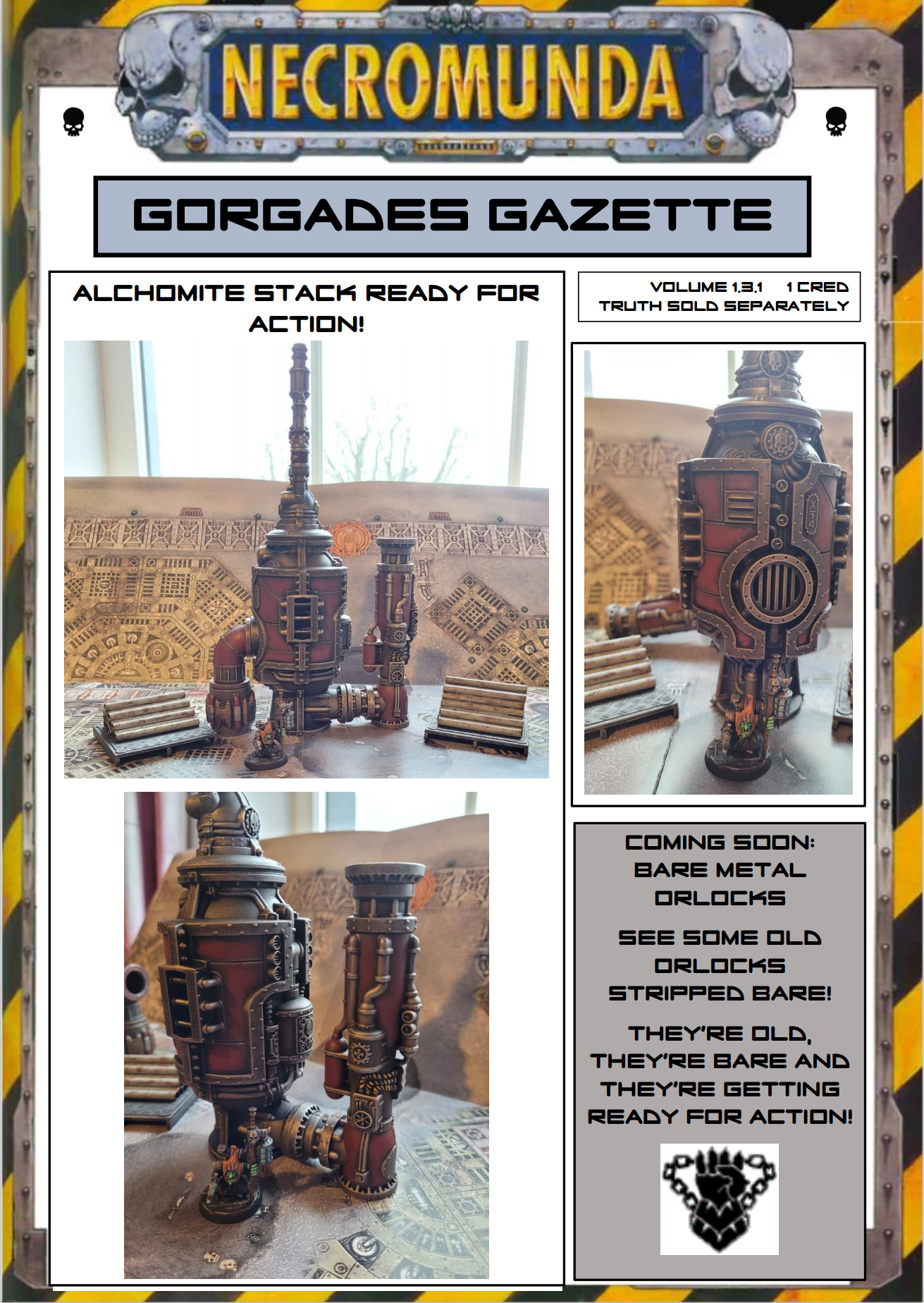 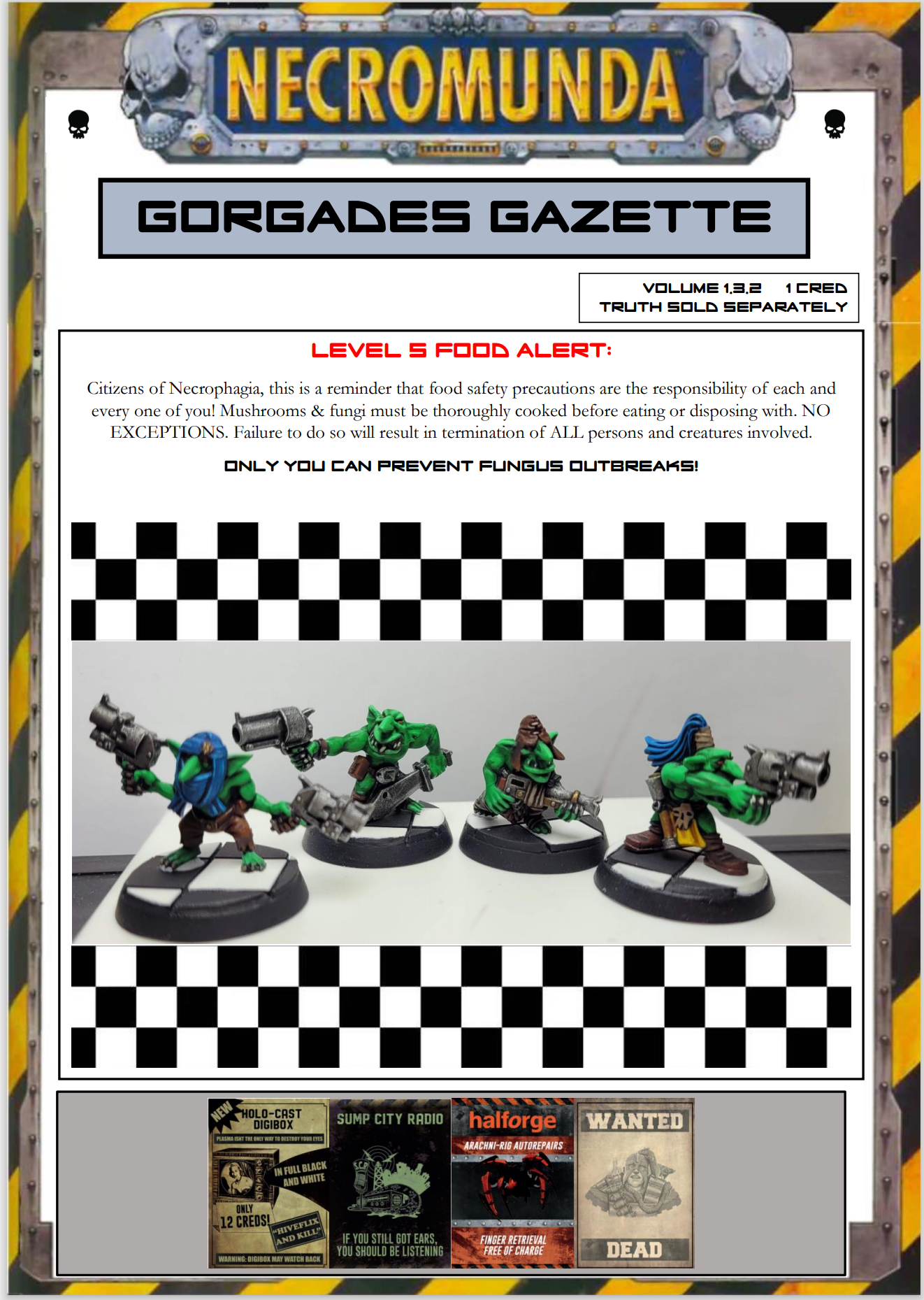 I got bored waiting for certain plastic items to come back into stock, so I've started using MDF terrain to expand the table. I did a quick test peice to get the feel of working with the kits and whilst I've had to alter my painting technique I used on the plastic stuff, I think I've now gotten the hang of MDF terrain and whilst I can't get the exact same effect as I do on the plastic, they are close enough and give some nice variation to the colour scheme anyway. Brought an absolute ton of MDF stuff and now working on planning combining the two sets of terrain into one.

Also picked up some absolute steals this week- a whole lot of '95 Escher gangers, closer to completing my collection of them now! Also managed to snag a sealed Karloth Valois and a almost-new copy of outlanders! Picked up some cheap LED sets when I was out shopping as well, so I can start lighting up the terrain now, though I do still need to get a whole bunch of other colour LEDS and start wiring up stuff myself, the shop brought LEDs are nice and easy to use but I'd like to learn how to do my own and light the table up in the way I want it to be! 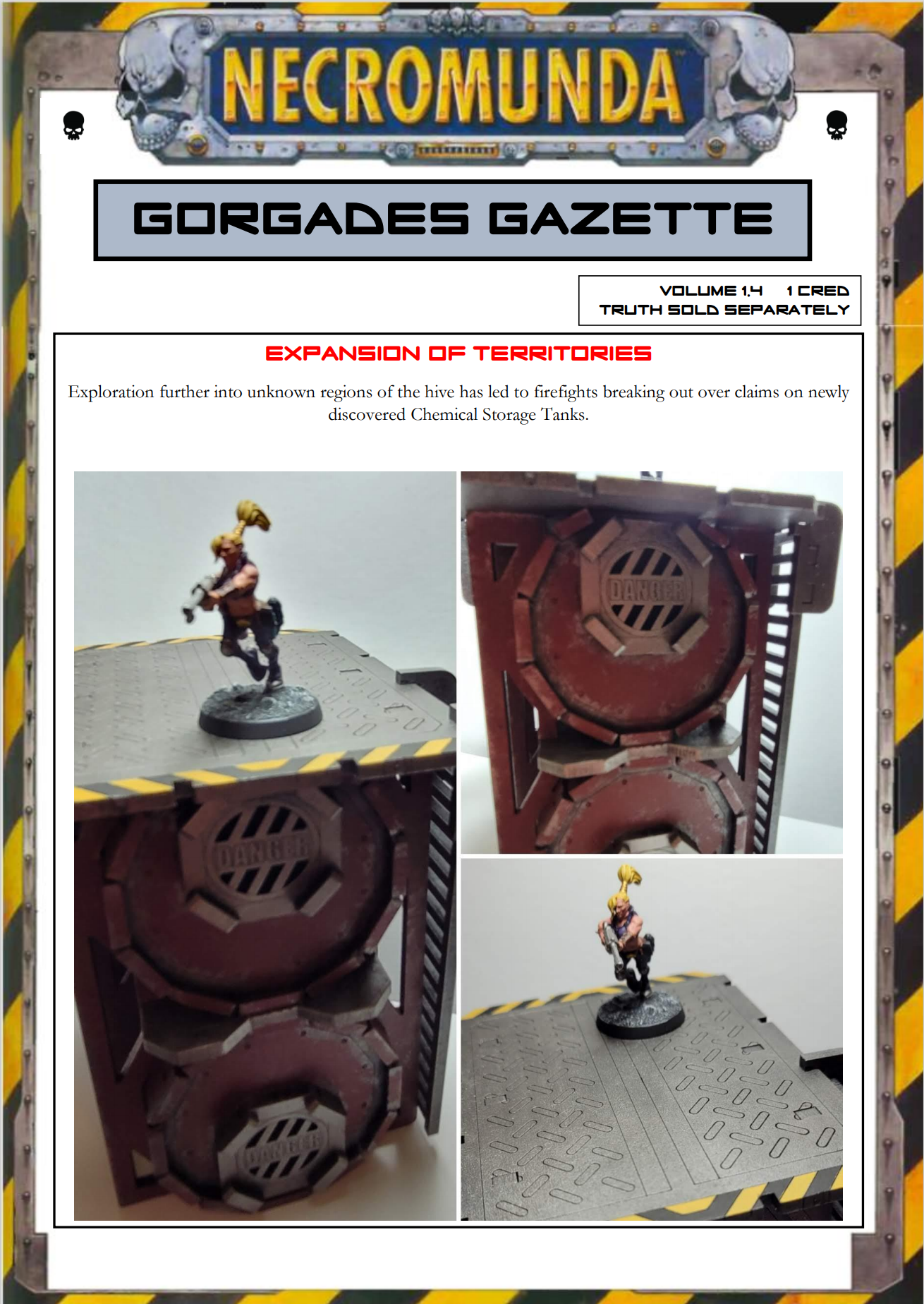 Needed a break from building and painting terrain, so built and painted a Wretched Orc Bounty Hunter.

Have just realised I missed the band on his arm, so will have to go back and do that and tempted to try adding a tattoo, but for a speed paint whilst watching a film I don't he turned out to bad and is fine for adding to the NPC character pool. ……as fungoid creatures, do orks even have tallywackers?

Punktaku said:
……as fungoid creatures, do orks even have tallywackers?
Click to expand...

He's just a guy that glued on some rubber ears and painted himself green. You know, to stand out a little, be more intimidating. And reduce the number of people asking "why is your tallywacker out?"
Reactions: RexHavoc, Pagumb and Punktaku

Makes as much sense as anything else.
Reactions: MedMos and Pagumb
R

Punktaku said:
……as fungoid creatures, do orks even have tallywackers?
Click to expand...

I try not to think about it too much, but if I had to give an answer, I'd assume they still need to be able to drain the Squig brew after a heavy night!

MedMos said:
He's just a guy that glued on some rubber ears and painted himself green. You know, to stand out a little, be more intimidating. And reduce the number of people asking "why is your tallywacker out?"
Click to expand...

Either way, I dont see too many people lining up to try and catch him and force him into a pair of pants!

No newsletter this week- I've injured my eye and have to reduce screen time as much as I can. Still working on terrain though and painting when its comfortable to do so. Got some more batches of 1995 models come in from the trade groups so thought I'd best start reducing the backlog of models! Gave this Goliath a strip and a new set of skin. 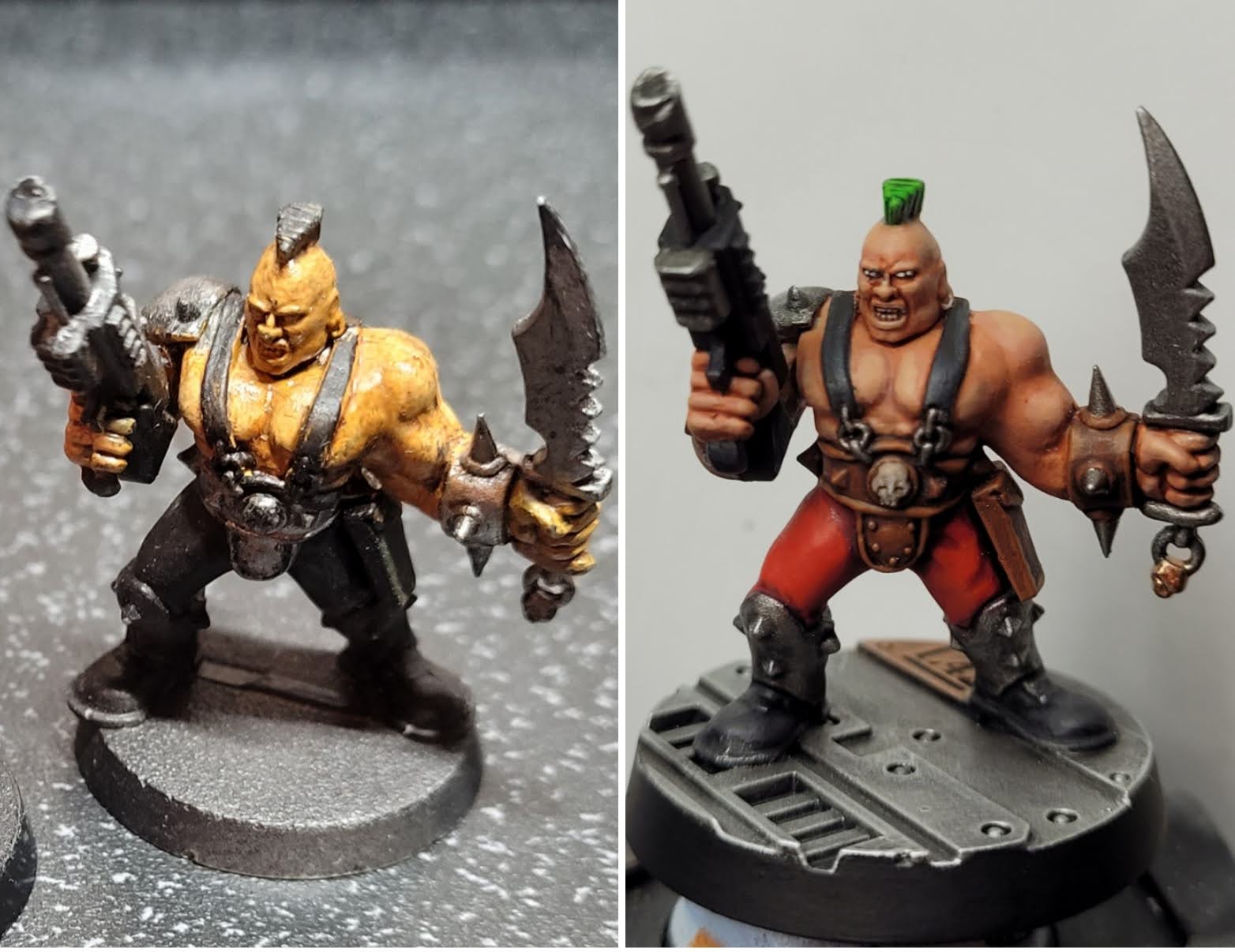 Not been able to do much for months as my eye is still bad and still waiting on the hospital to clear backlog from the last two years. But I've started getting some small bits done here and there, as long as I'm careful I can get away with a few minutes putting models together every couple of days without making anything worse.

Finally got my hands on some of the plastic tiles a while back, so finally getting to mess about with the plastic scenery that I've been hoarding. Started work on my Space vermin (Skaven) warlocks secret liar, an arcane library tile. 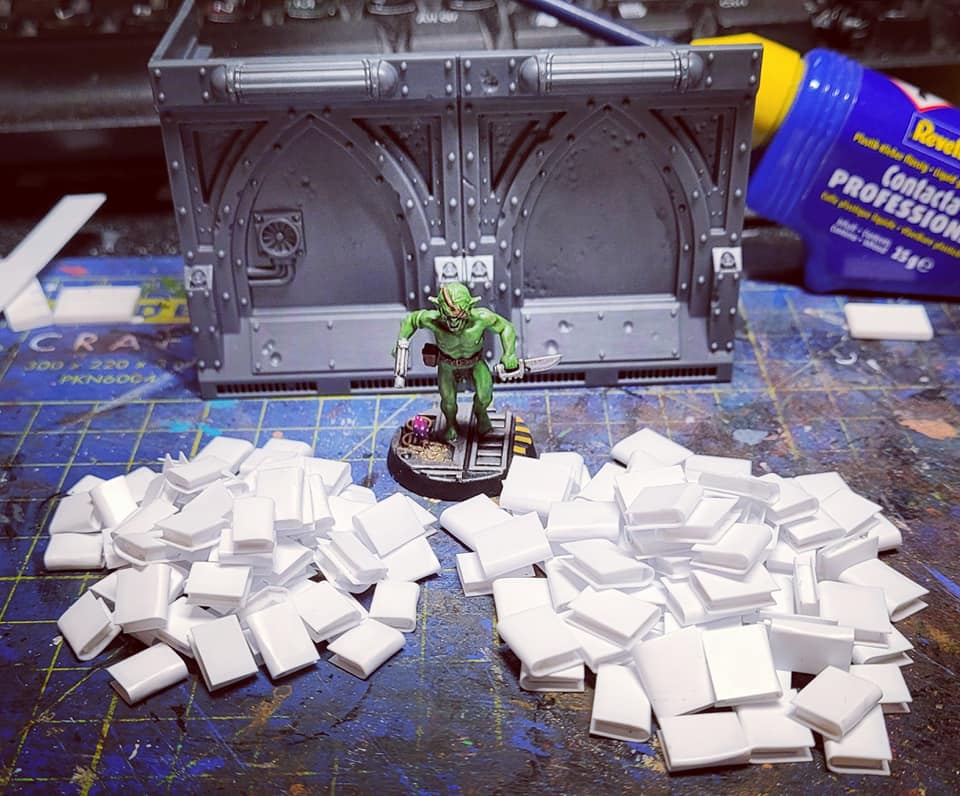 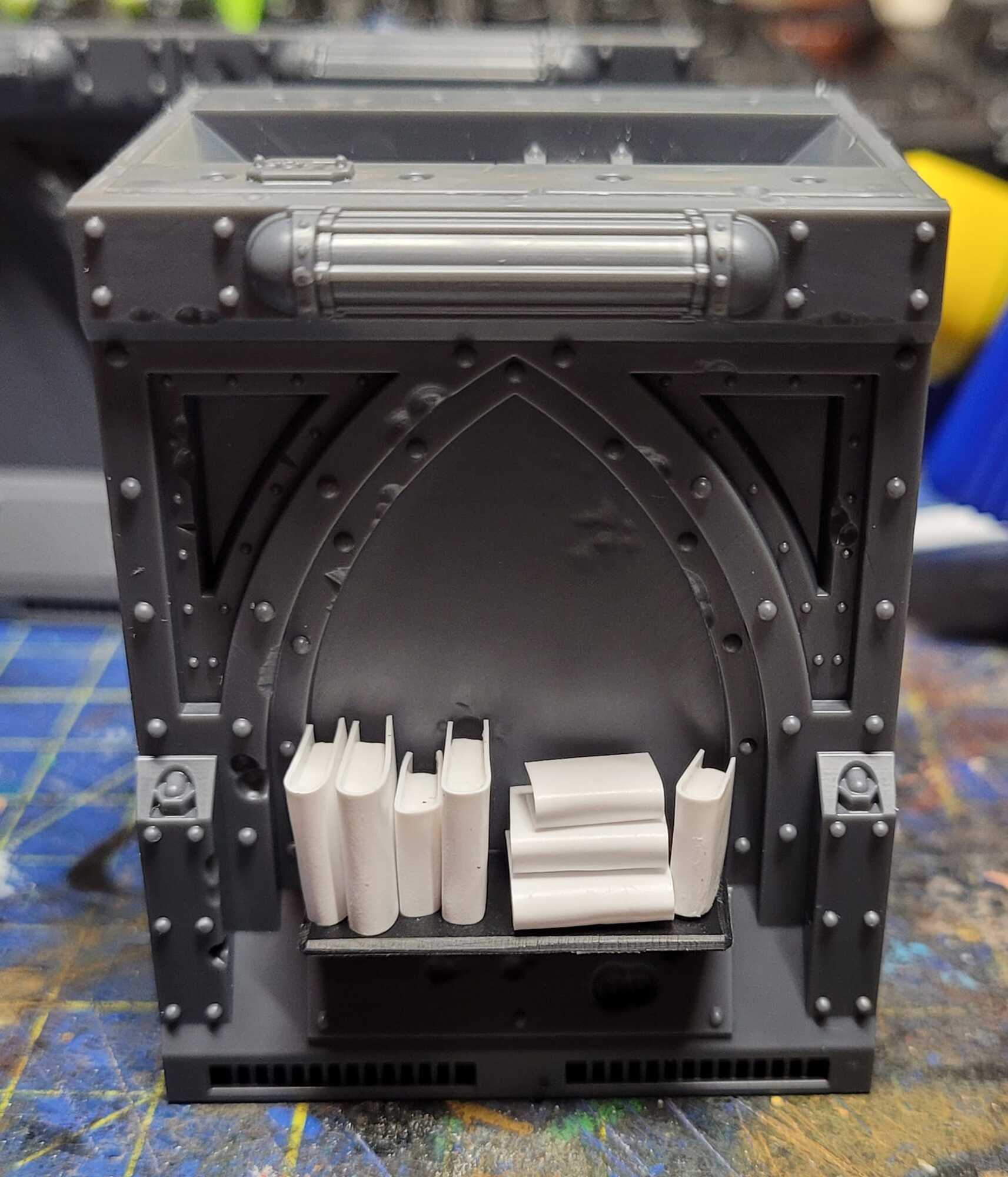 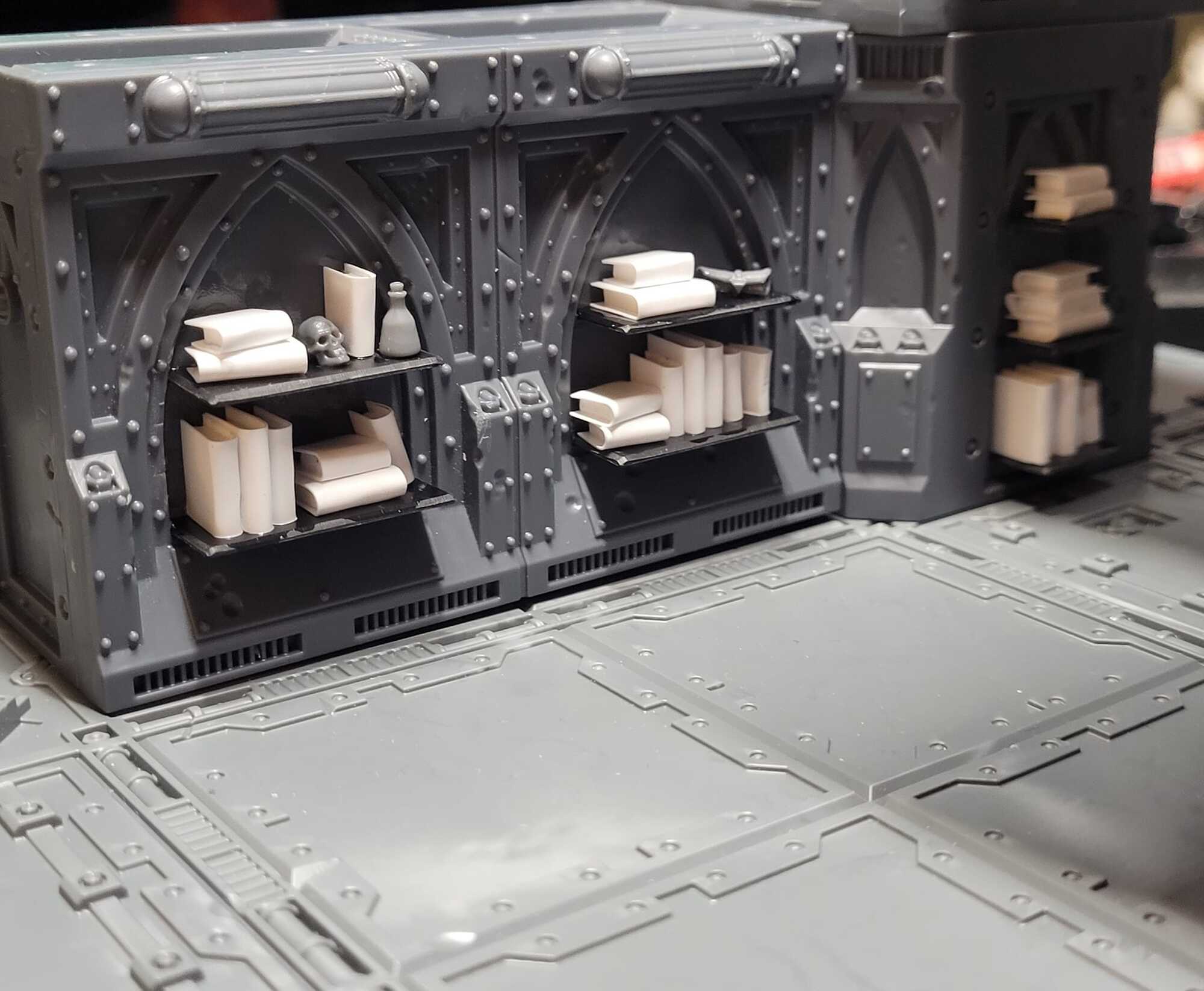 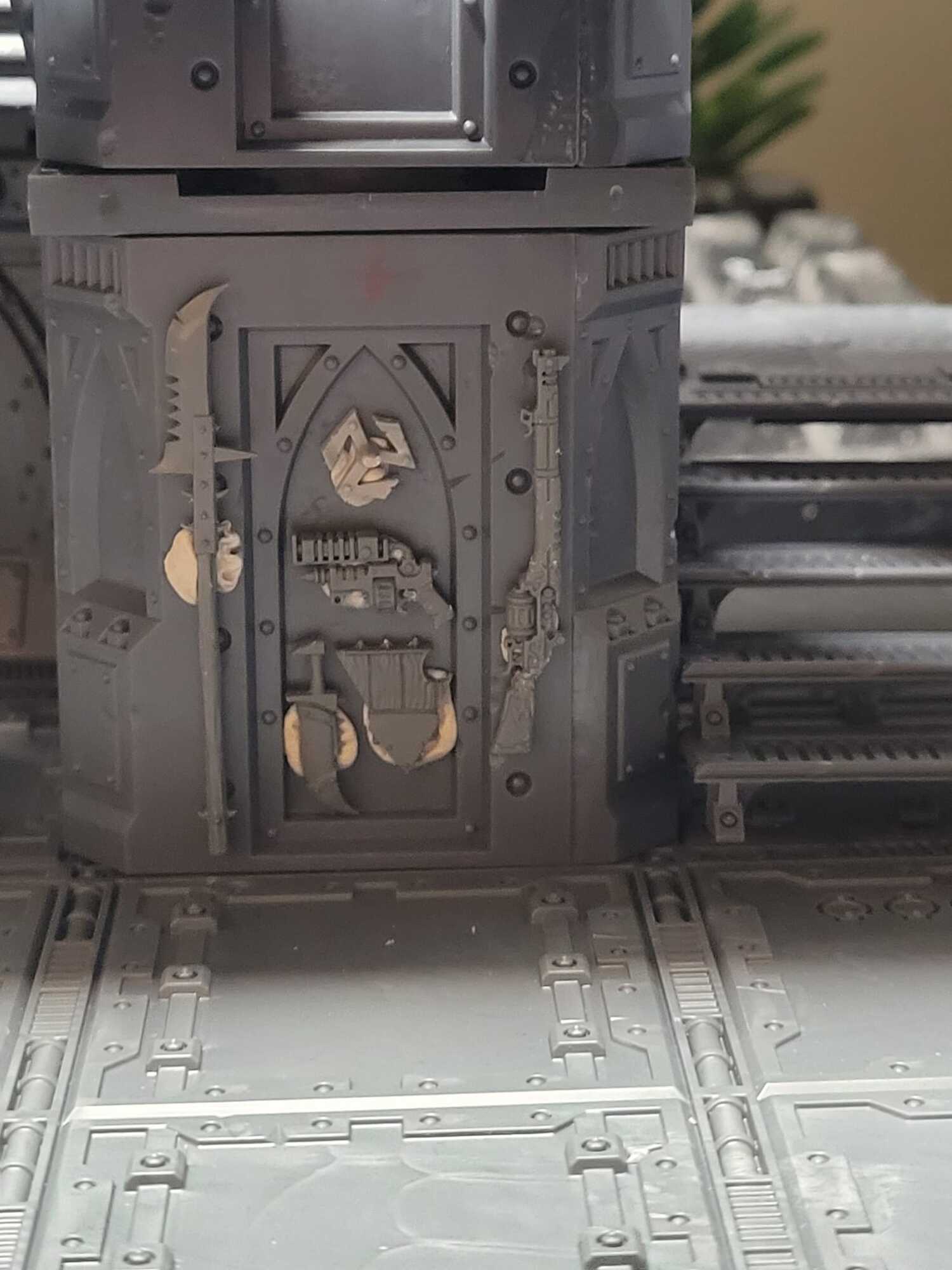 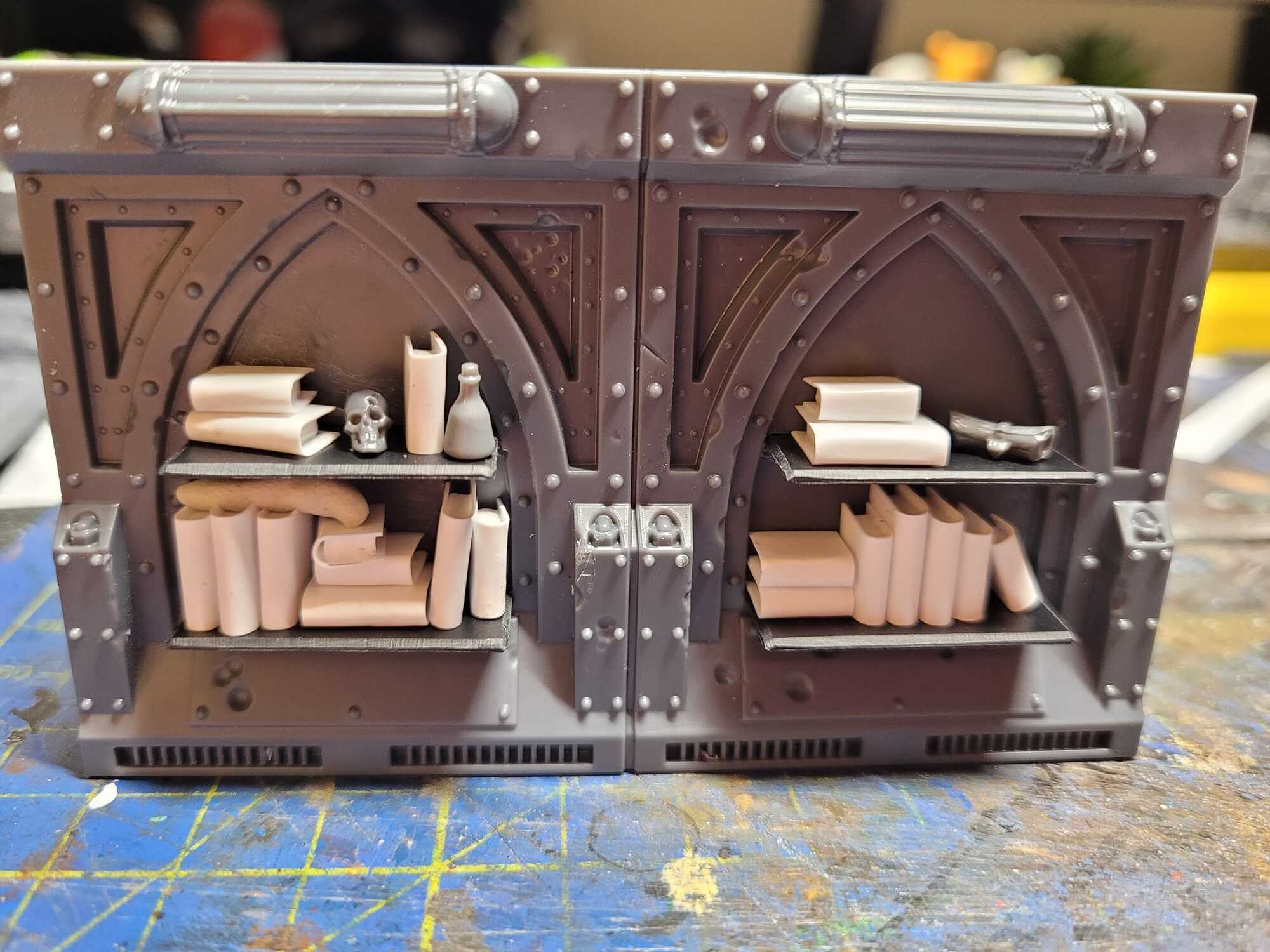 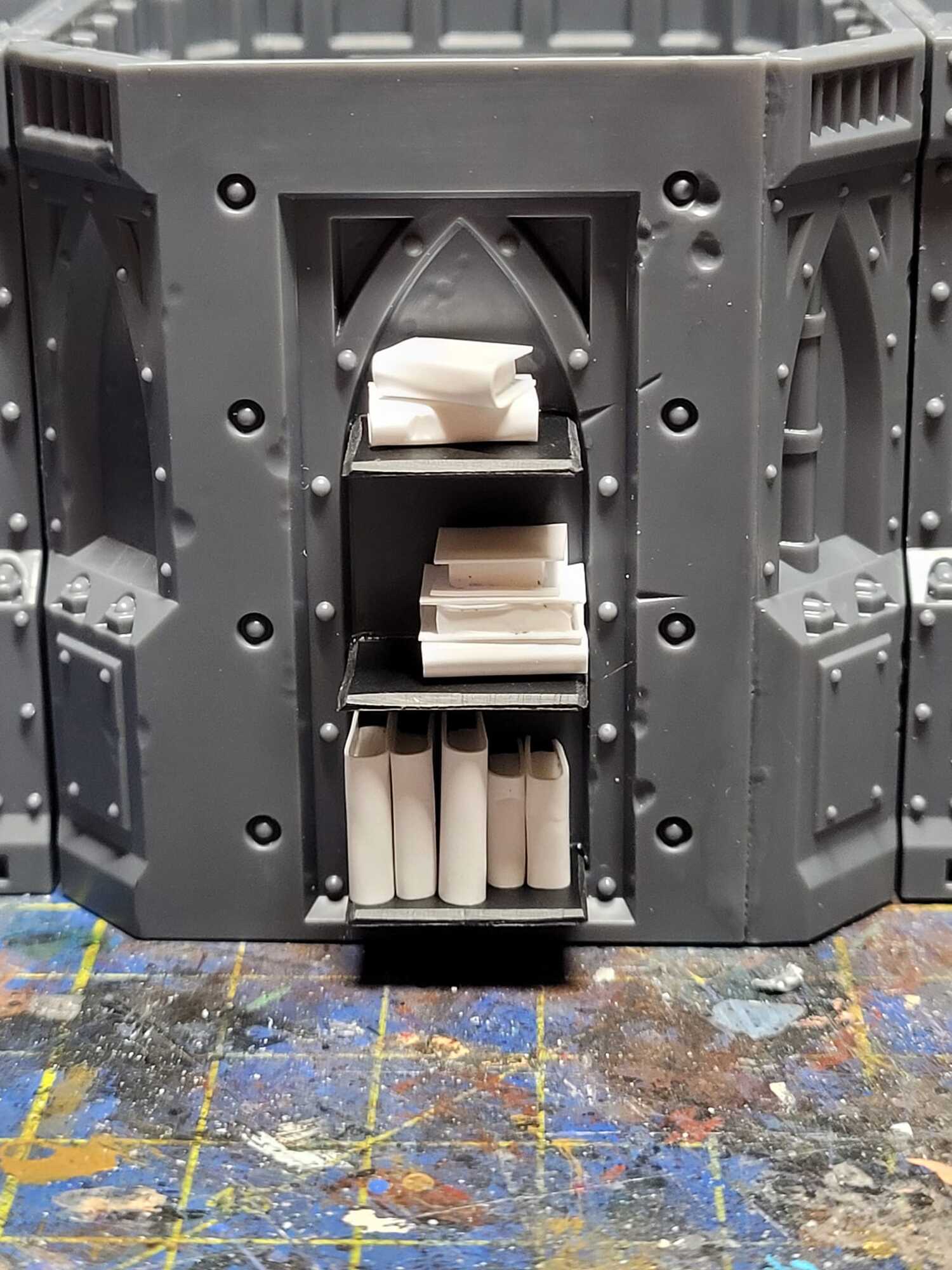 I've ordered some green LED string lights, which I'm hoping will give the tile the proper spooky warpstone glow, so just waiting on them before I start gluing these down and starting work on the 2nd layer.
Reactions: breegull, Karandrassh, Mr. M and 3 others
R

I'd gotten some more work done on my tile, but something was off with it. I had the walls set back a bit further but the tiles are not really made to support this and there were huge gaps between the walls and the columns. I liked that it created a cool looking alcove but it was just too awkward to fit these kits.

I could have filled the gaps with pipes or other junk, but I didn't like the look and wanted to keep the library tile looking less scrappy and ramshackle as I have plenty of other tiles that will go for that style of the underhive.

But the re-jiggle still looks OK and I think by moving the weapons column to a wall section I can still bring in that alcove look. Thinking of adding some wall panels to the edge of the tile so the stairs are blocked in a bit more, making it more of a 'secret' location that the open floor plan it has right now.

Started adding lighting as well now, but cutting the holes in the walls is hard work, I might leave it at the handful I have done and just have the rest of the lights under the stairs/celling tiles. 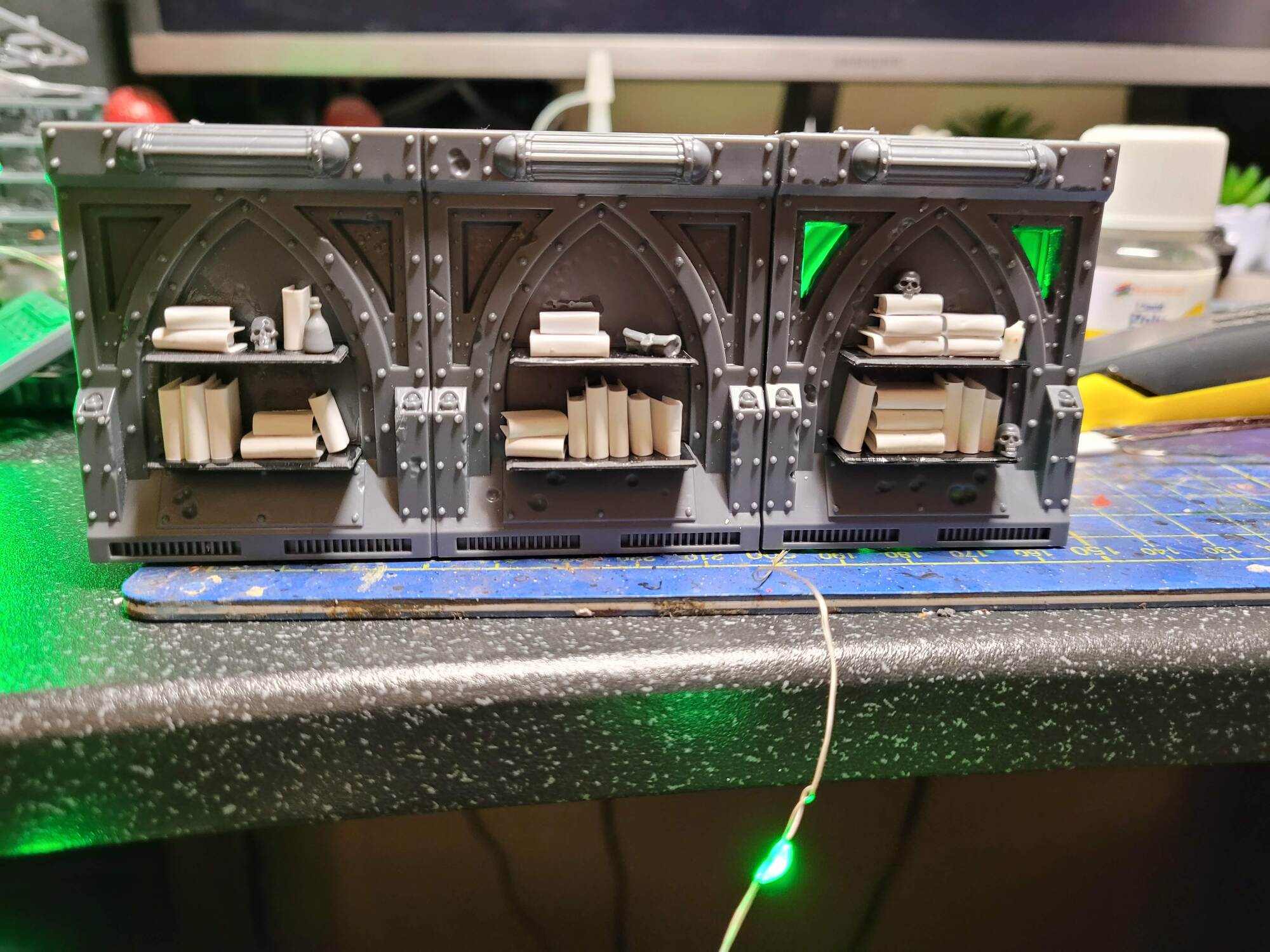 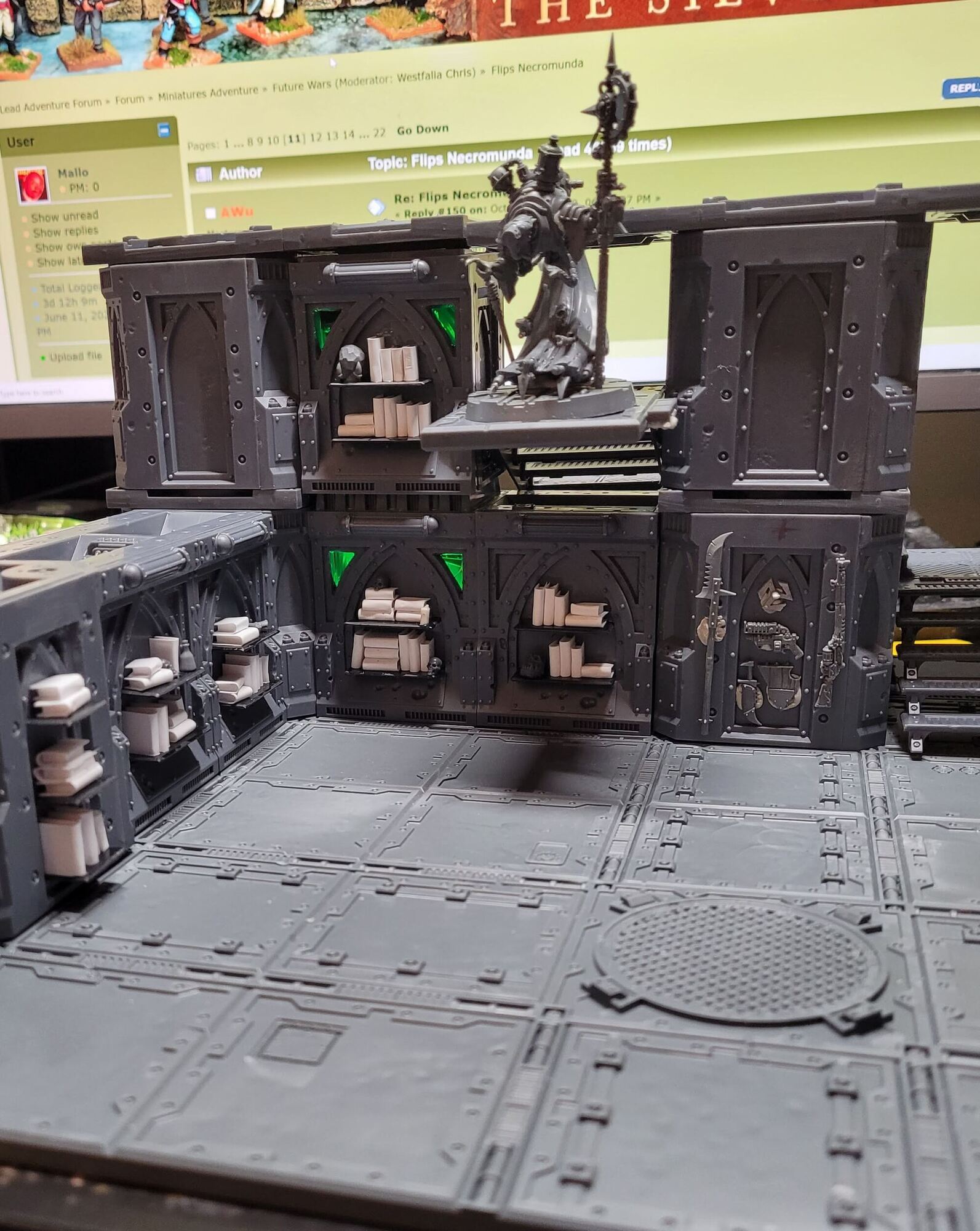 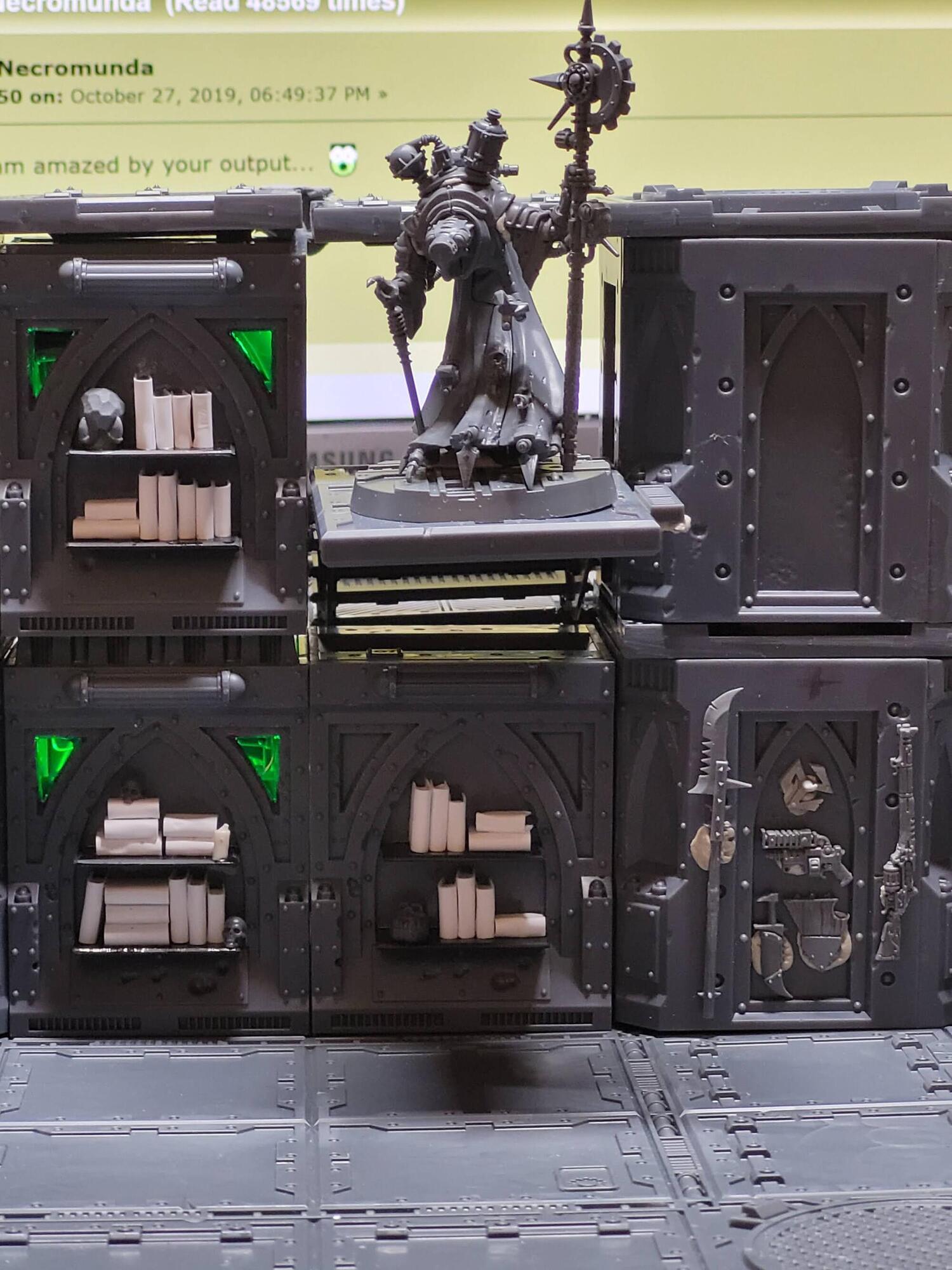 Had to take a break from making walls and books (Partially due to needing to rest my eye and also a little bit so I didn't go mad!)

Catching up with the backlog of Sump City radio episodes and had a bit of a play around with some parts to make a 'proof of concept' Squat bartender. I'm sort of 50/50 on him, can't quite tell what he's missing. He's armed with a rat basher and a mega pint.

I might try a change of heads, I have plenty to choose from and might find a more casual head works better than the fantasy helmeted one (I choose this one as I like the face) Not sure if he needs his backpack or not, as there is the odd bar on his back but it does change his profile. 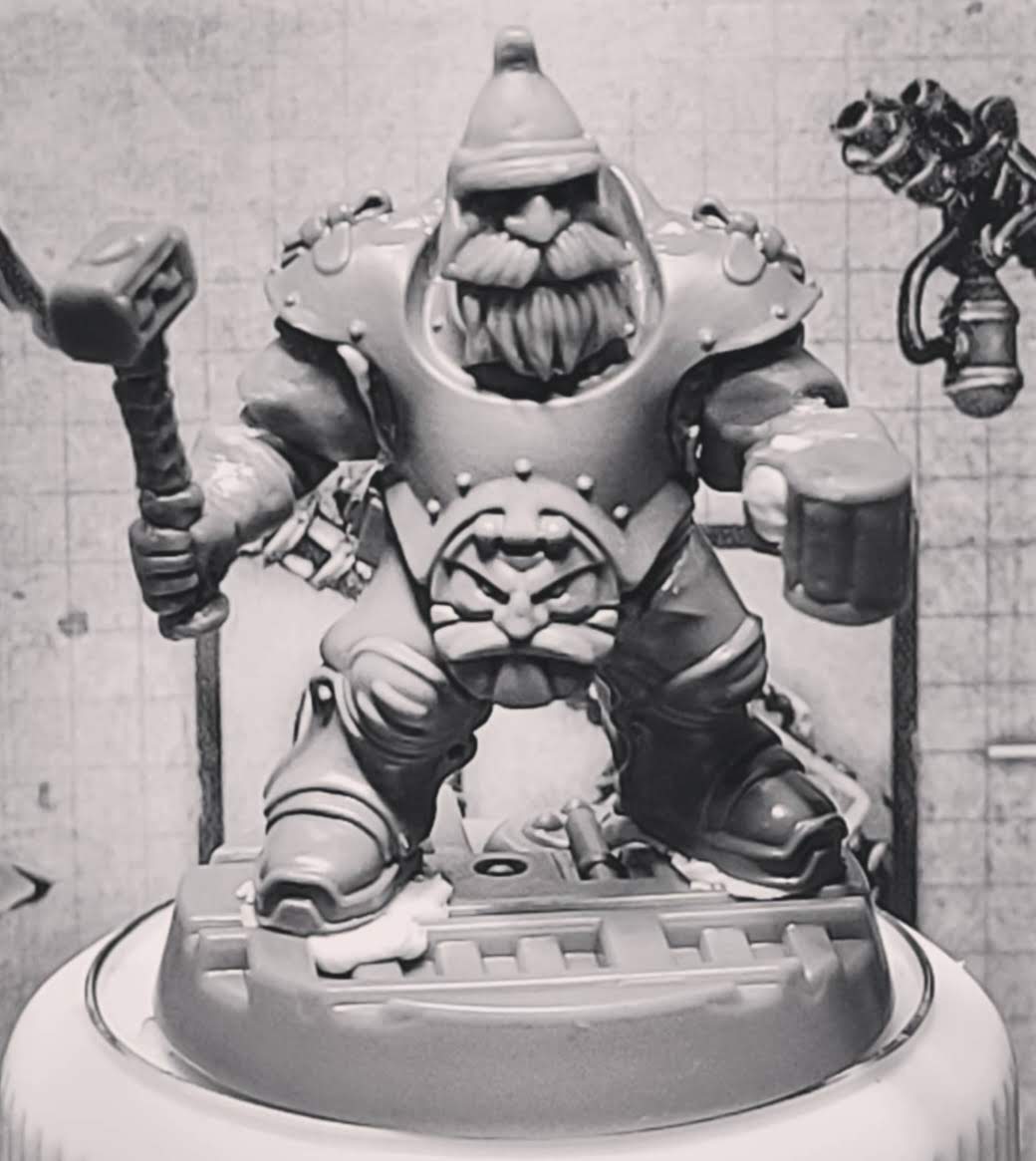 I think the helmet and chest plate make him look more like an adventuring customer than a bartender. Maybe an apron would help?
Reactions: RexHavoc and Chaos Moomin
R

Punktaku said:
I think the helmet and chest plate make him look more like an adventuring customer than a bartender. Maybe an apron would help?
Click to expand...

Yeah, I think I agree. I'm going to stick him on the back burner until I can source either a better body part.

The library is aces. The books are made out of just bent sheet styrene, right? They look great. Only thing that would make them perfect would be a bit of texturing, scuffs, scratches, bookmarks, skulls....
Show hidden low quality content
You must log in or register to reply here.

Necromunda: The Book of Guilders-Ford

U
Necromunda Gaming Board Build