From my experience sticky fingers are needed, at least to disallow swapping weapons willy-nilly between fighters in recovery.
I'd allow fighters to swap items/weapons when they level up. Otherwise serious injuries lose their impact.
Reactions: Petitioner's City, Al_Weeks and Ledward
T

Why wasn't this a problem in NCE?

JawRippa said:
From my experience sticky fingers are needed, at least to disallow swapping weapons willy-nilly between fighters in recovery.
Click to expand...

That doesn't make it needed. It that's your issue, then there are other ways to achieve the same result.
We could restrict sticky fingers to fighters in recovery (fluff justification: their weapon got damaged at the same time they got injured and are in need of repair)
Alternatively, sticky fingers could be restricted to special and heavy weapons, or weapons that cost more than X credits (as I guess nobody cares if an autogun gets swapped around — fluff justification: those weapons are more complicated than common weapons and getting used to them takes time)
Alternatively, a fighter who is given a new 'complicated' weapon suffers -1 to hit during the first battle they use it (same fluff justification)

As for the clipper justification, it's tied to wysiwyg (and wysiwyg is tied to GW's need of selling more miniatures). Get rid of wysiwyg and it becomes a non-issue.
Reactions: Petitioner's City and TopsyKretts

I think it's possible that there is a compromise solution that addresses several concerns and desires with regards to sticky fingers.


I think it needs it's own separate thread though.
Reactions: Ledward

I'm strongly in favour of WYSIWYG, and it's not just about selling miniatures.
It's about reducing confusion on the tabletop.
Reactions: TopsyKretts, kendoka, Al_Weeks and 1 other person

I agree there was not a problem in NCE. NCE also had random advancements for all gang fighters.

I'm also not saying it has to stay.

I also played a lot of oldmunda and never had any issues with swapping weapons and wargear between fighters.

I guess it comes to the desired goal of the Community Edition. Are we tweaking and making minor adjustments to the existing rules a la the NCE, or are we overhauling?
J

Most of the movement-related things I wanted to point out have already been mentioned, but here's some extras:

Dangerous Terrain:
As written and using their example you can end your activation standing in a vat of molten metal with no ill-effects! I would like to include wording to prevent ending of activations in dangerous terrain.
Separately, the Dangerous Industrial Terrain from Badzone 7 is not, in fact, Dangerous Terrain. If we end up looking at that too I think some rewording would be needed.

Pitfalls:
They aren't actually in the core rules, but are one of the most common hazards

Leaping Gaps:
As the rules are very specific to gaps, I would not be able to leap over the vat of molten metal in the Dangerous Terrain example unless you were using the Badzones rules for it. I think leaping over difficult or dangerous terrain should be a thing.
Leaping over an obstacle should also be possible: Odd that I could jump a 6" gap with a Juve but not hop over a 1" pipe.

You can only make a jump if you have enough movement to complete a jump, but what happens if you don't? Since you don't have to declare that you're making a jump you end up in a strange situation where if you say 'I'm going to try to jump this gap' and don't have enough movement you don't fall; you simply don't jump. So I think that declaring the intention to jump at the start of the move should be introduced.

Leaping Gaps should be based on Base Movement, if we introduce such a concept. It immediately removes any mad stacking issues like Sprint and Stimms allowing 20"+ leaps.
Need to clarify what counts as having made it! I've seen people argue that you can jump a 4" gap with 4.1" of movement based on RAW even though this technically leaves only a scrap of their base on the terrain. I'm not sure if there is a rule about what happens when your base is sticking off the edge of the terrain, but some clarification here would be good. I'm sure I've read that you need to able to actually balance the model on the terrain, and that if any amount of your base overhangs an edge it's an initiative check, but damned if I can find it.

Jumping Down and Falling
There's actually an argument that this and Falling have the same break points as anything over 2" when jumping down is rounded to 3" and so on. However, this is not very clearly conveyed. Falling looks as if it is structured around rounding up distances to the nearest inch but does not convey this.
Reactions: TopsyKretts and Ledward
J

Jumping across and down:
What happens if I want to jump across a 4" gap to a ledge 3" down? Mathematically this is a 5" straight line jump, but I've also tried treating it as a 4" jump across and a 3" jump down (2 initiative checks). Don't mind how it pans out, but a clear rule would be useful
Reactions: Thorgor
T

I don't think that's supported? Either you jump vertical to a ledge on the same level, or straight down.
J

TopsyKretts said:
I don't think that's supported? Either you jump vertical to a ledge on the same level, or straight down.
Click to expand...

Well I guess that moves from a discussion point to a suggestion, then, because I'd love for it to be supported by the rules.
Reactions: TopsyKretts and Ledward

If anything, leaping to a lower floor should be slightly easier (and leaping to a higher floor, if possible at all, should be way harder) because it's a parabolic trajectory. Falling damage should be a risk though.
Reactions: kendoka and TopsyKretts
J

Yeah, that's what we reasoned with the 4" + 3" thing. If you can make a 4" horizontal jump you should be able to make the 4" jump that would be easier in real life, and then you just have to stick the landing.

There was more too it, as well... I'll see if I can dig out the notes. It was something about where you fell depending on whether you failed the first or the second initiative check
T

Speaking about falling damage, we have to standardize the incremental distances between jump modifier and falling damage. What GW did in this case is abhorrent: 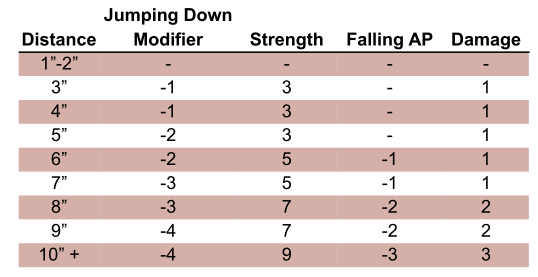 The only reason I'm willing to accept is they forgot what the increments were, and too lazy to check them up, made something separate. I don't care which way it is, but it HAS to be the same.
Reactions: JawRippa, kendoka and Thorgor
T

Icedman said:
I agree there was not a problem in NCE. NCE also had random advancements for all gang fighters.

I'm also not saying it has to stay.

I also played a lot of oldmunda and never had any issues with swapping weapons and wargear between fighters.

I guess it comes to the desired goal of the Community Edition. Are we tweaking and making minor adjustments to the existing rules a la the NCE, or are we overhauling?
Click to expand...

We are mainly overhauling, but I believe the rules for sticky fingers is dirty and contradictory. I don't want everything to fall back on NCE, but if a mechanic has degenerated, it would be better to use NCE solution as default.
Reactions: Thorgor

Could we streamline moving over obstacles (anything less than 2" but more than 0.5") to be a flat 1" penalty to movement? It is pretty wonky having to measure every fence a fighter steps over for exact numbers.

TopsyKretts said:
Speaking about falling damage, we have to standardize the incremental distances between jump modifier and falling damage. What GW did in this case is abhorrent
Click to expand...

I'd also like to see jumping down any height less than 3" not to require an initiative check. I think that it decentivizes moving around the battlefield.
Reactions: TopsyKretts and Ledward
C

We all done with new ideas?

A silly sidequestion, is it possible to move through your own fighters? I've always treated them as they were not on the battlefield when moving models. Same question for pinned/injured teammates. After re-checking core rulebook I couldnt find the rule for it.
Last edited: Oct 2, 2020
Reactions: TopsyKretts
T

Game is extremely clunky if you can't move through friendly fighters.
Reactions: Al_Weeks

IIRC, there was a rule for moving through friendly fighters in the N17 book, but it disappeared in N18 (you were just not allowed to finish the move with the bases overlapping, of course).
Reactions: Al_Weeks and JawRippa

Would be worth explicitly stating it though. Just to make the rules a little more intuitive.
Reactions: Thorgor, TopsyKretts and Al_Weeks
Show hidden low quality content
You must log in or register to reply here.
Share:
Share Link
Top Bottom