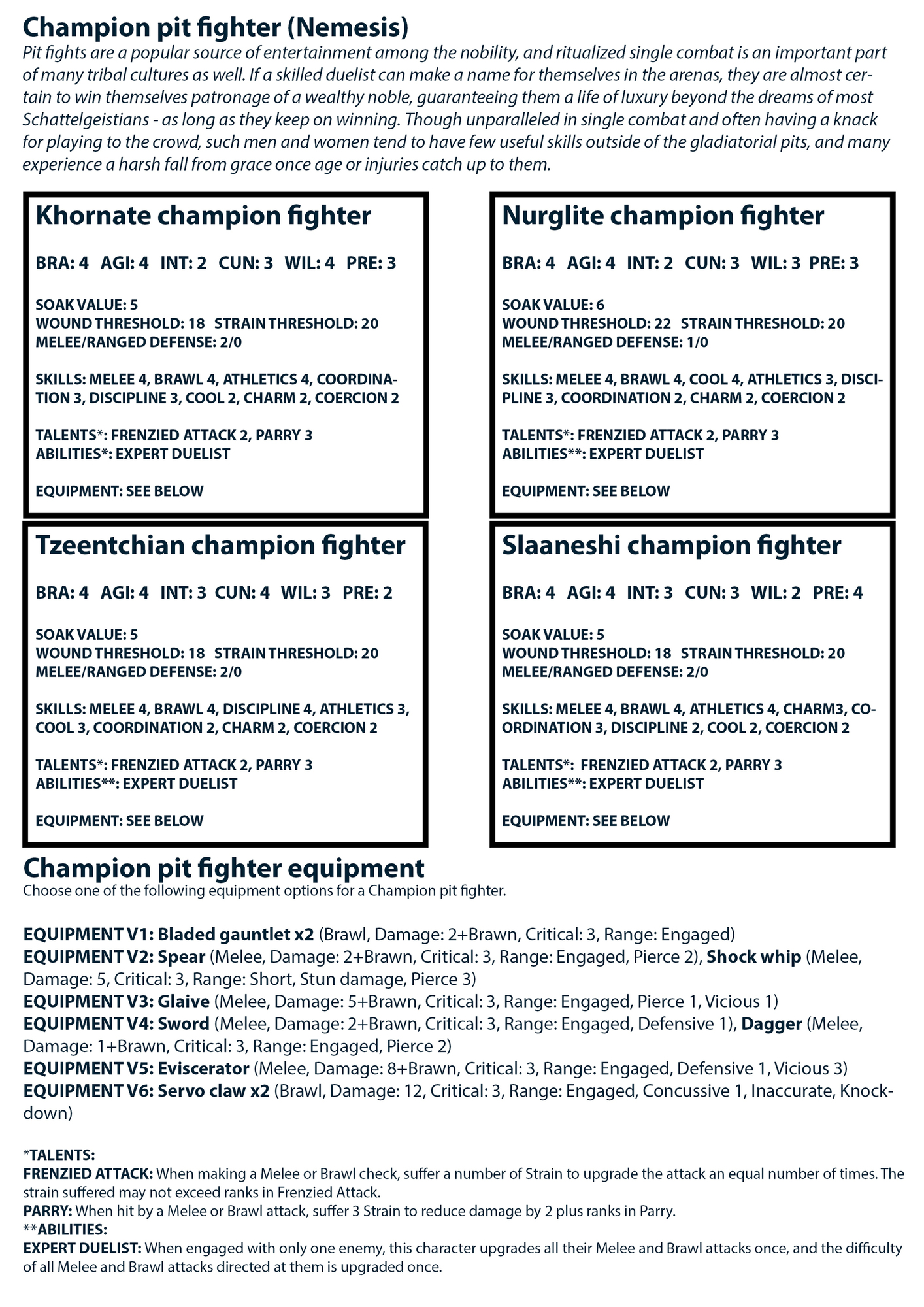 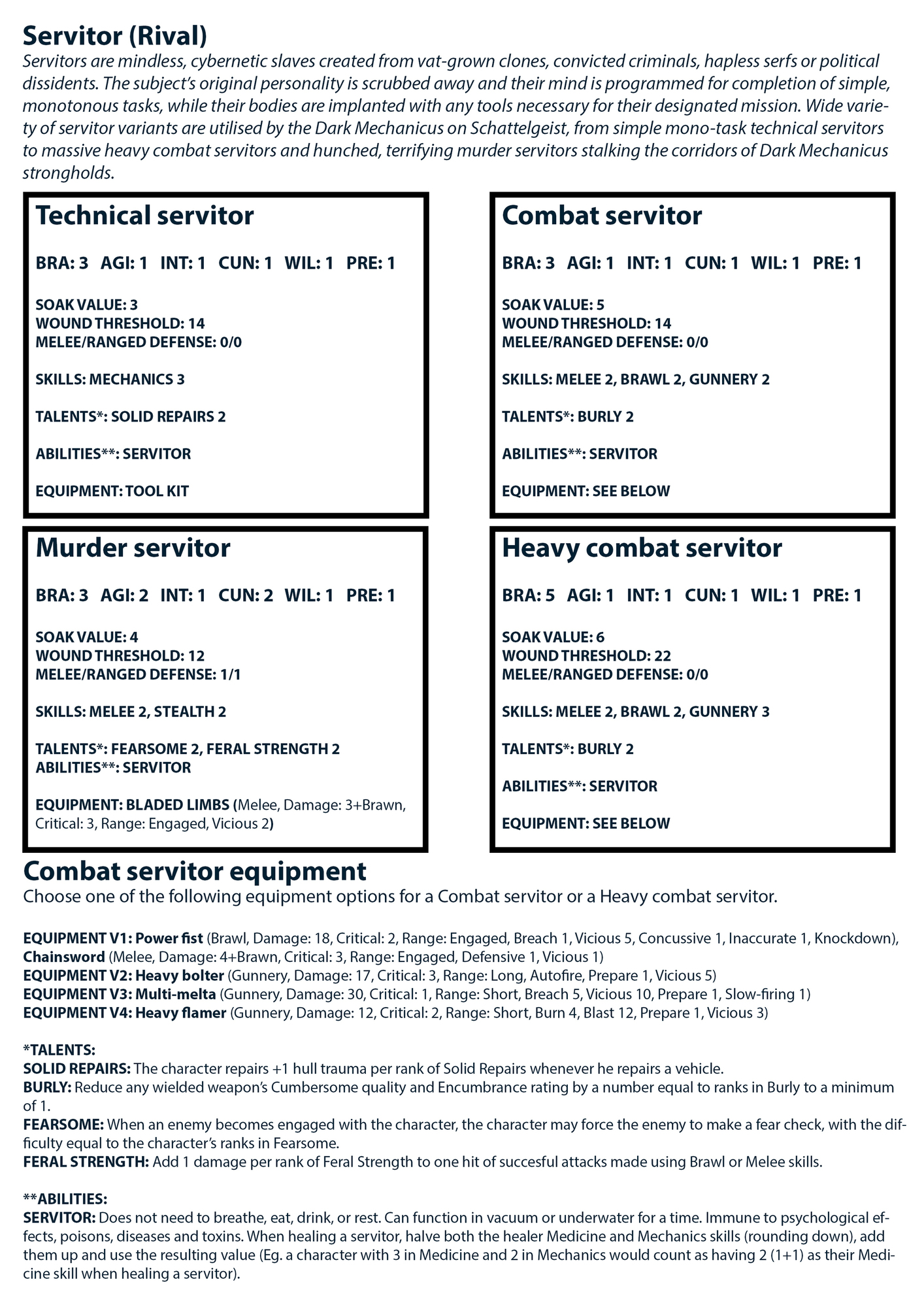 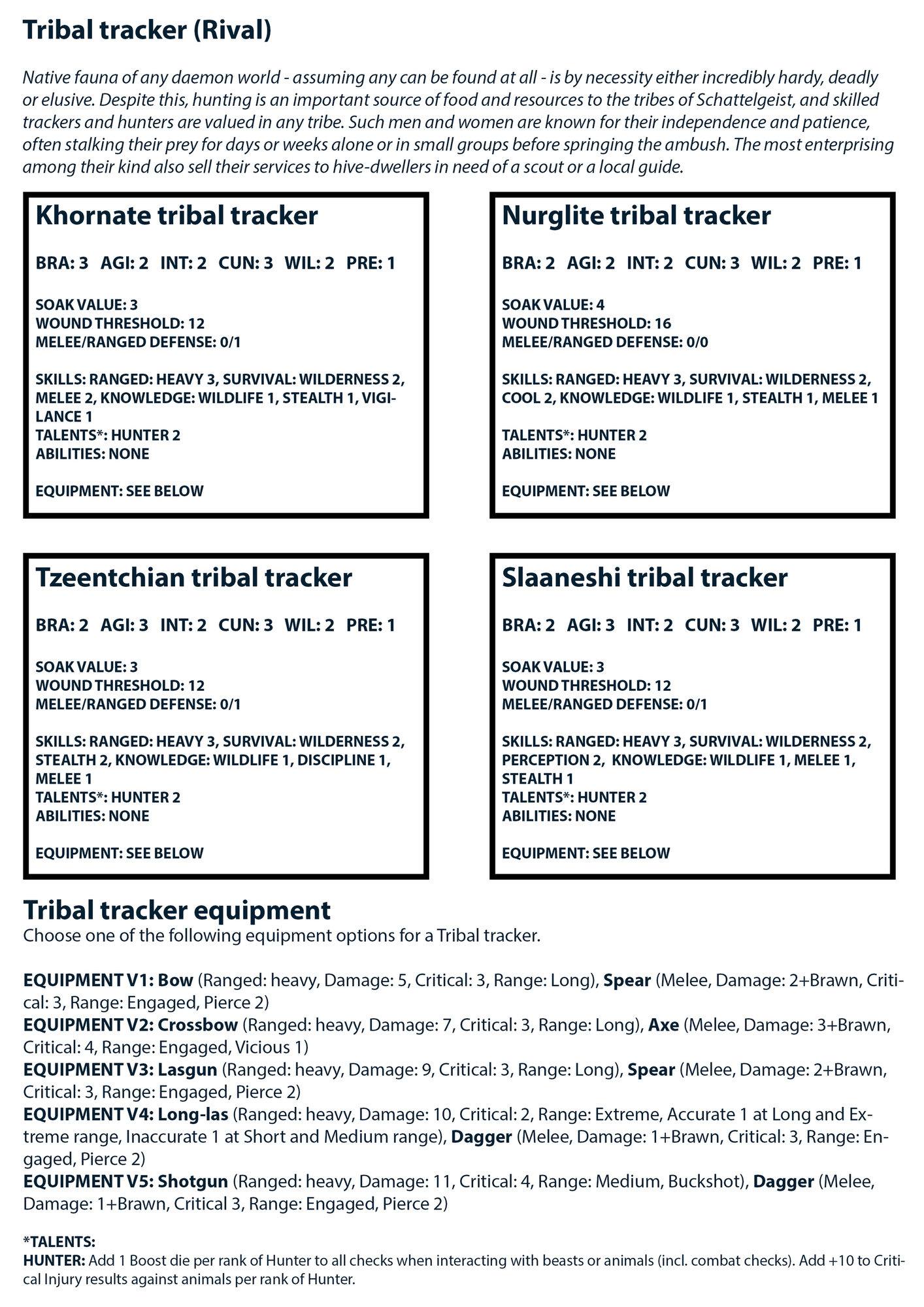 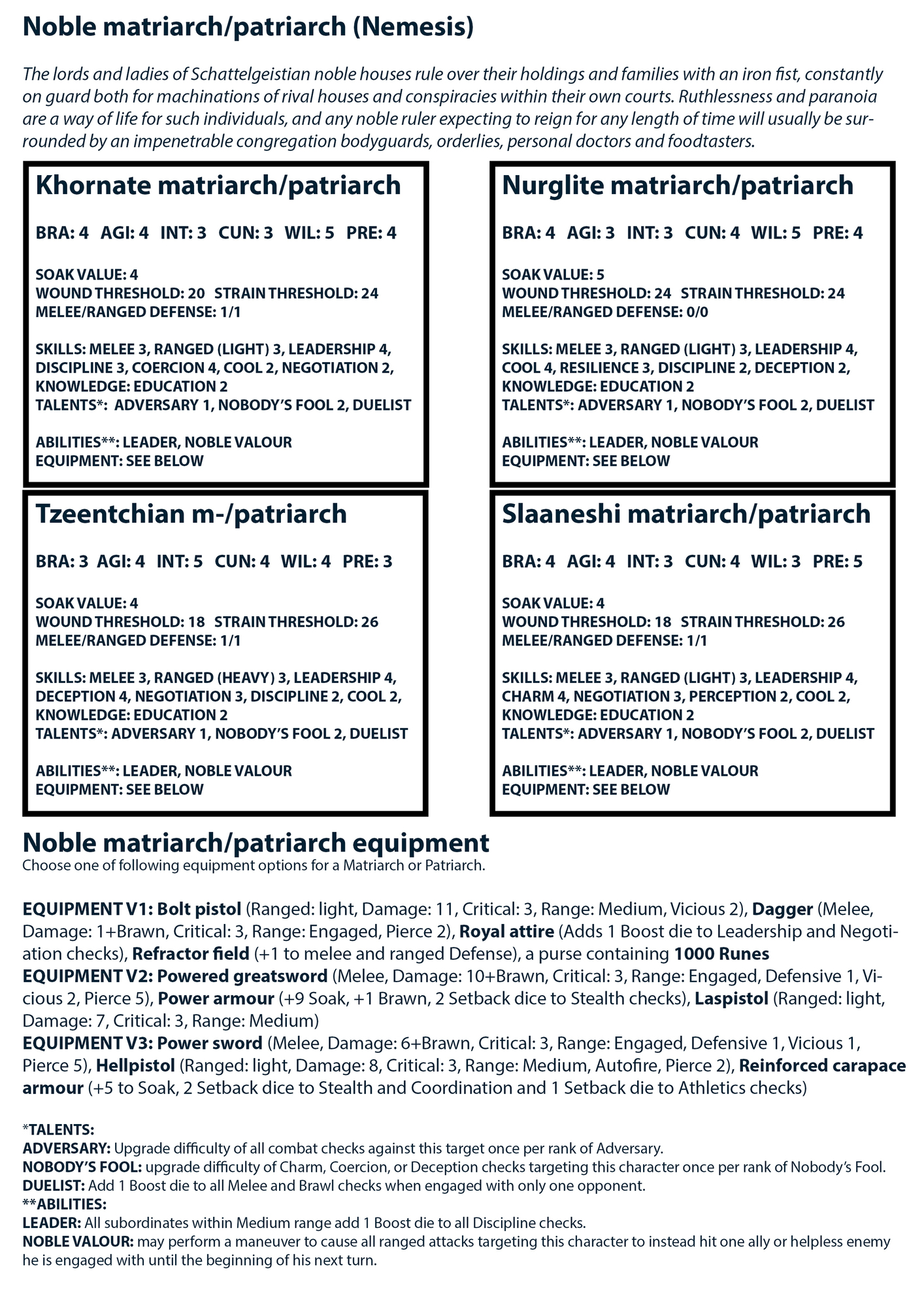 can never have too many bad guys
Reactions: HorribleHedgehog

True that. I like to have stats ready for any eventuality.

I managed to squeeze out one more Minion-type NPC template out - the cannon-fodder of beastman herds, the Grunt. 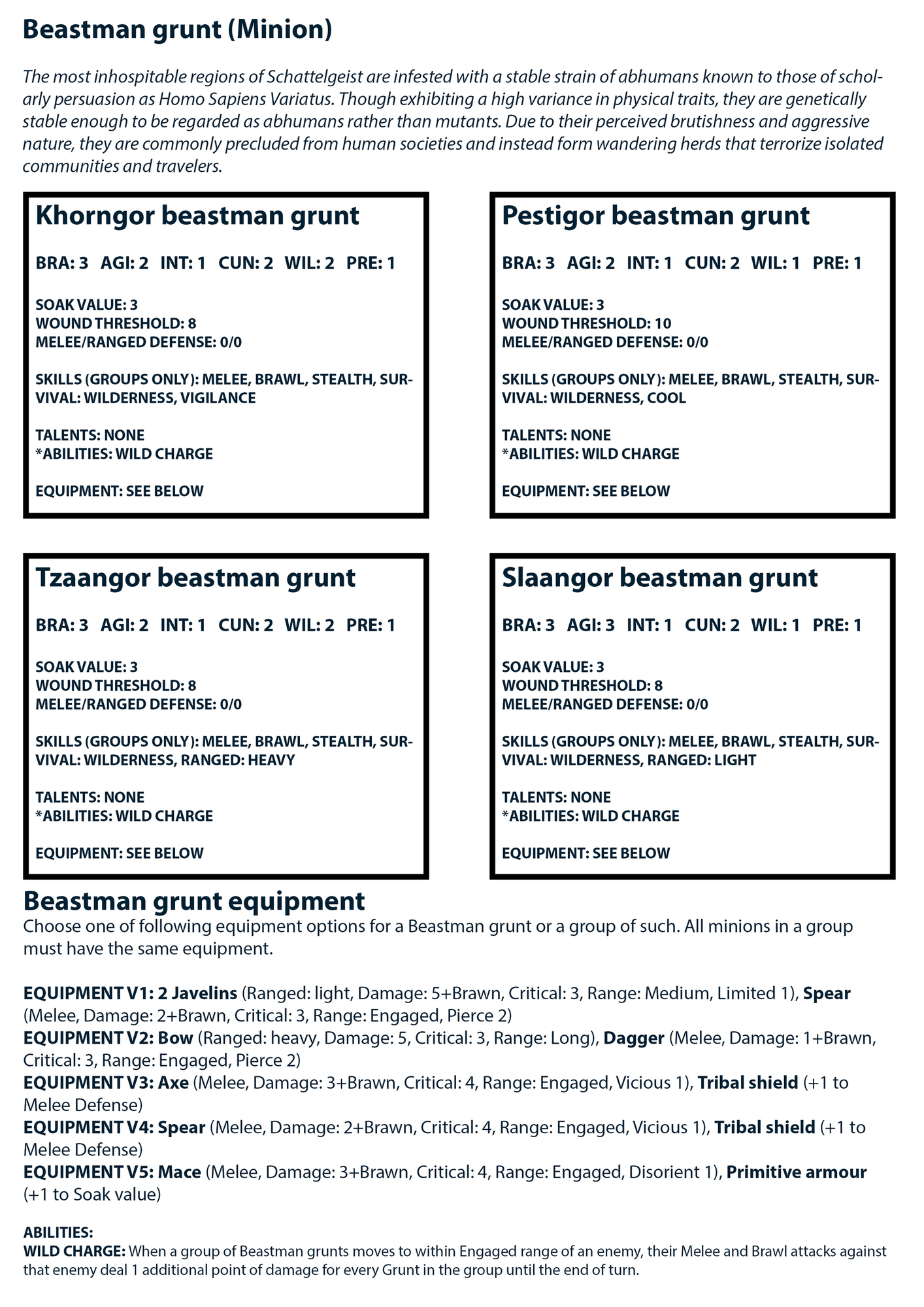 I've been too busy with school to work on rules much, but I did knock out some flavour quotes to sprinkle around the final document. Whatcha think?


"Look to your armaments - they are your tools of worship. A weapon ill-maintained is an affront to the Lord of Battles."
- Harrakarak, Gunkeeper of the Eight Fingers tribe

"And on the seventh day, they and all their kin will be visited by fourty-nine plagues and torments, and before the fourteenth morning, every last one will have accepted the embrace of Father Nurgle..."
- Excerpt from Prophesies of Flies, Rats, and Endings

"The wise understand that madness is inevitable, and prepare accordingly. Only a fool believes their mind impregnable."
- Sepharique, the Eldest of the Bonecrowns

"A warrior fighting for a master will never equal one fighting for their own sake. Loyalty is a virtue for the weak and craven."
- Eater-of-Hearts, Champion of the Abraenix Coliseum

"Let me make this clear, captain - the lives of your men matter very little to me. The attack will proceed as planned. If you find yourself lacking courage for this line of work, you'll be replaced by someone of firmer resolve. Someone with more understanding of their position relative to mine - a good soldier. Being a good soldier is all I ask of you. For your sake I hope it's not too much."
- Apothecary-captain Al-Azhazrek of the Mournguard

"Model 7 Ovligath-pattern lasgun. Known as the Whip of Khorne by the Ashfeet, and Long-death by the Harrokinites. Palers exchange them as they exchange companionship vows; Lasians take their name from it. Acidmantidae gangers believe it holds the wielder's soul within it. Semi-auto, enough punch to put a fist-sized hole in a man's torso at 800 meters, comes with a rechargeable power pack, capacity 120 charges. This is the one thing on this rock that will never, ever let you down; you have my guarantee on that, friend. An absolute steal for 1500 runes!"
- Honest Jaah'n, weapons dealer
Last edited: Nov 3, 2019

I've given some more thought to the workings of nobility. The most powerful eight noble houses reside in the spire - they are commonly known as the hive nobles, while the noble houses residing outside the hive are referred to as the waster houses; however, to enforce competition, every 37 years one hive noble house is kicked out and replaced with a waster house that has sufficiently pleased the prince.
Reactions: Punktaku

it’s an intriguing idea. certainly could be the basis for some lengthy campaigns. (even some quick games of Necromunda, where the outcome of the game affects the campaign. don’t think that should be “official” though)

No real reason, I just figured it sounded mystical enough. Although 3 is a magical number and 7 a lucky one... Lately I've been thinking about the Prince's alignment and the Malal-aligned prince angle has been growing on me. Maybe 38 because 3+8=11? Or 29 using the same logic.

Malal-aligned prince would explain a lot of stuff, from the roughly equal power distribution between the main gods, as well as the planet itself being somewhat mundane (ie. habitable) by daemon world standards - I figure that a Malal-aligned prince wouldn't be as powerful as one dedicated to the big four, and hence have limited ability to mould their planet. Or maybe they just don't care enough.

I'd love to sneak other games into the campaign, like using a Total War skirmish to simulate massed combat. Damn I wish my laptop could run Total War: Warhammer...

First observed in the downhive Hab-block 77.b "Puke", puke rituals refer to a variety of bizarre, cacophonous ceremonial get-togethers popular in the underhive of Hive Ovligath. A typical puke ritual consists of inebriated locals banging walls with metal pipes and incoherent anti-authoritarian ranting, in what is thought to be a crude imitation of an uphive music fair. Most respected scholars attribute these repulsive cultural tendencies to low intellect and moral degeneracy of the downhivers. Puke rituals have numerous regional offshoots, such as the nurglite "crustpuke" subculture or the aggressively self-destructive "malcore".
... Too on the nose?

at first i thought you were going for a take on the Roman vomitorium
Reactions: HorribleHedgehog

I actually didn't know those were a thing!

It's been a long time since my last art distraction, so I was bound to trip up eventually... sketched up a siren. ATM it kind of feels too 'normal', and I'm not 100% on the servo-skull speakers. 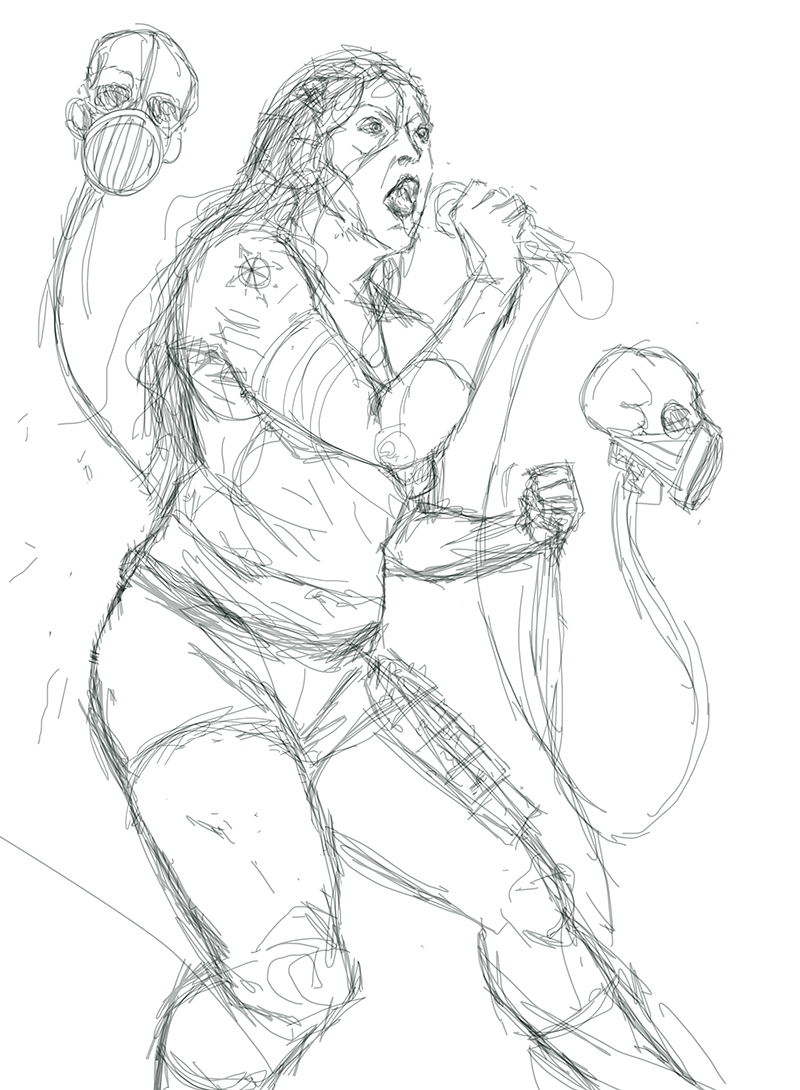 i see what you mean... she’s too “Earthy Metal Singer Chick”. i think you need to go to the extreme in either direction: Unearthly Xenos Beautiful Songstress or Terrifying Song Monster. Guess it depends on which Ruinous Power she follows. A combo of the two would be a challenge (i imagine, as someone with 0 drawing ability).

the noise marine sonic grill (speaker mouth) has been used before... the servo skull speakers are interesting, but pretty Imperium. maybe a combo? like a creature/device mounted on her back with speakers or speaker heads that come over her shoulders (like the old Harlequin grenade launcher)?

an entourage of speaker -beasts could be interesting. small tweeter beasts and huge woofer monsters. (wouldn’t do much for your pic, unless they’re faded into the background)
Reactions: HorribleHedgehog

I'm not set on a god yet, but Khorne seems like the obvious choice given the extreme metal frontwoman aesthetic. Then again, I'm concerned that Tzeentch and Nurgle are underrepresented in these character pieces, and I should try to balance things out...

Back-mounted speakers is a good idea - maybe some sort of a smaller Doom Siren -like rig, or speakers integrated into armour to make it clear this is an RPG character who probably gets into fights a lot.

You've got a point with the servo skulls being a bit too imperial, at least as they are. Maybe servo shrunken head speakers instead? Or keep the skulls but give them horns or chaos star/god rune headcrests.

Speaker beast pack would be amazing, but a little too much for a piece like this. Maybe I'll try to sneak in a little woofer rodent somewhere on her, though.

Edit: Okay, now I can't stop thinking about a nurglite siren followed around by a swarm of screamer-rats amplifying every word they say. That's gonna become a fluff piece, if nothing else!
Reactions: Punktaku

I had to get the amplifier-rat-swarm-siren thing out of my head, so I wrote a short fluff piece. Now I can hopefully turn my attention back on the illustration, and then back on to the rules...


”This is it. The big door at the end of the hall, besides the big guy” Griever murmured to the men behind him. ”Check your rebreathers and put those ugly faces on.”

The instruction was hardly necessary. Their demon-face rebreathers had been checked and double-checked barely five minutes ago and the Sangu brothers did not need to expend effort to terrify people. Armed all the way to their rotted teeth, with muscled arms carpeted by scar tissue and painted faces of rough-hewn granite, they looked as mean and nasty as any who had walked Ovligath’s underhive.

Three-fourths into the hall, the door guard noticed them. A bloated mountain of a man, he positioned himself between the door and the interlopers, began to rumble out a challenge. He didn’t get far before three lasbolts punched sizzling holes into his torso. The brothers put two more into his skull to be sure.

Griever was appreciative of the fact that his rebreather protected him from the stench. Nurglites never smelled good, but they were even worse when they burned. Gesturing the brothers to stand guard, he got to work on the door. The locking mechanism was standard issue. Bypassing it was a matter of minutes.

A series of clunks, then metallic scraping sound as ancient servos began to drag slabs of reinforced steel aside. Griever and the brothers positioned themselves to face the doorway, weapons at the ready.

The first thing they noticed were the rats. The spacious chamber was overrun with chittering vermin. The room was furnished with things that would have been expensive in their better days, but now bore testament to the god of entropy. Amidst the time-worn clutter, a tall, gaunt figure dressed in moth-eaten ballroom dress stood facing away from the doorway. If the occupant had noticed the intruders, they didn’t acknowledge them.

A vague feeling of unease came over Griever, but he forced it aside and tried to focus on the job. Taking a few careful steps towards the gangly being, he raised his voice and declared: "You've got three laspistols aimed on your head, Nurglite. Turn around slowly, no funny business, and we won’t fry you.”

Long seconds passed without the tall figure acknowledging the threat, or indeed, the presence of the thugs. His patience wearing thin quickly, Griever took a few more hurried steps before he was stopped by an unearthly sound, seemingly coming from everywhere at once.

”YOUR PRESENCE TELLS ME ULGO'S GONE TO JOIN GRANDFATHER NOW. AS ALL WILL, IN TIME.”

The strange voice, a droning legion of mourners, submerged the gangers in a sea of dizzying echoes. Shaking his head to ward off the noise, Griever took aim on the figure again, only to realize his body was answering his commands with drugged, shaky, sluggish motions, much too slow to take the shot before the voice ripped into him again...

"A LAMENTATION, AND A CELEBRATION, FOR POOR, POOR ULGO... YES. HE WAS ALWAYS A MOST FAITHFUL SERVANT. HIS FLESH WILL NOURISH A MILLION LIVES."

Shaking violently, Griever's weapon slipped from his grasp and clattered on the floor. A sharp crack of a laspistol pierced the disorienting echoes, the lasbolt slamming the far wall harmlessly - Griever's panicked mind told him it must have been one of the Sangu brothers. Finally, he could see the figure turning around, revealing a profligate death mask of lavish makeup, behind which icy eyes pierced into him, their insane gaze giving rise to a whole new level of terror welling up inside him. Without shifting his eyes from Griever's, the figure began to sing, a crawling, terrible dirge that made him crumple like a mannequin whose strings had been cut. As blood began to trickle out of his ears and his terrified mind tried to will his body into action, Griever noticed one of the rats scurrying into his field of vision. The rodent was wearing a harness with an attached miniature amplifier, transmitting the Nurglite's harrowing song.

A rat-mounted miniaturized morivox system, what remained of his rational mind reasoned. As the rat-swarm began to gnaw on his carcass, Griever despondently ruminated how unfit of a Blood God's servant his death would be.
I'm not much of a writer, so any constructive criticism would be greatly appreciated. 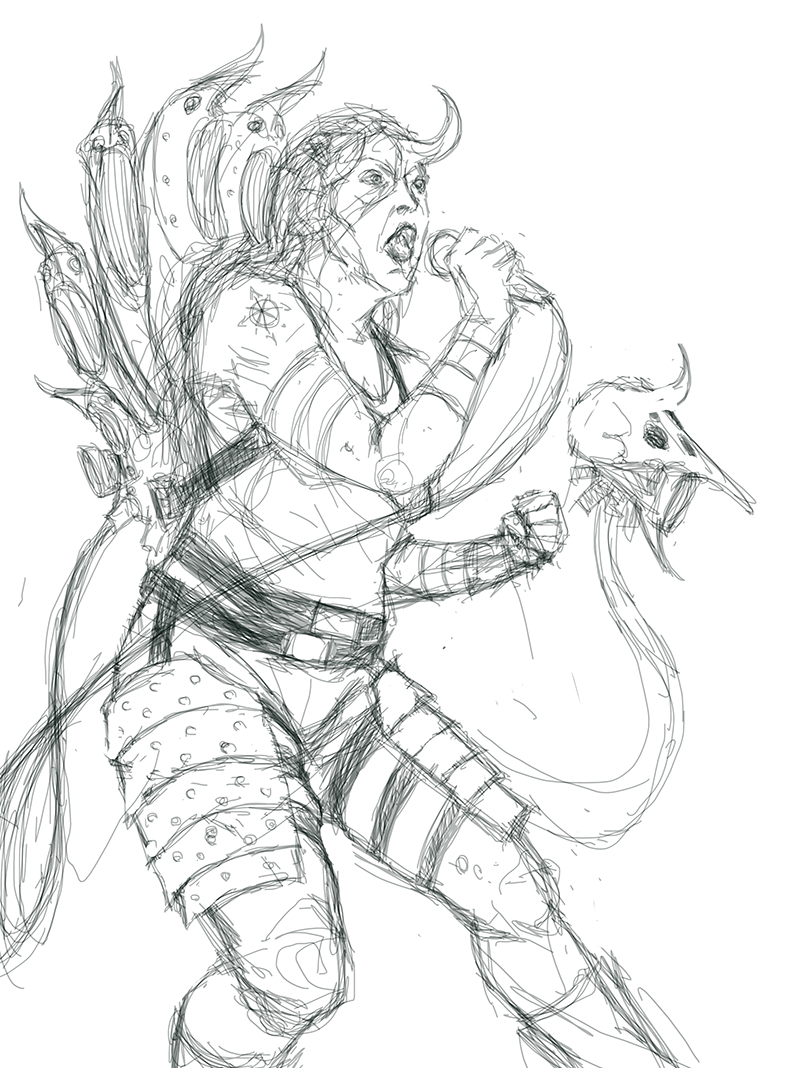 gotta put on a show for the masses! busy doesn’t mean bad. the unwashed will eat it up
Reactions: HorribleHedgehog

Started on the shading. 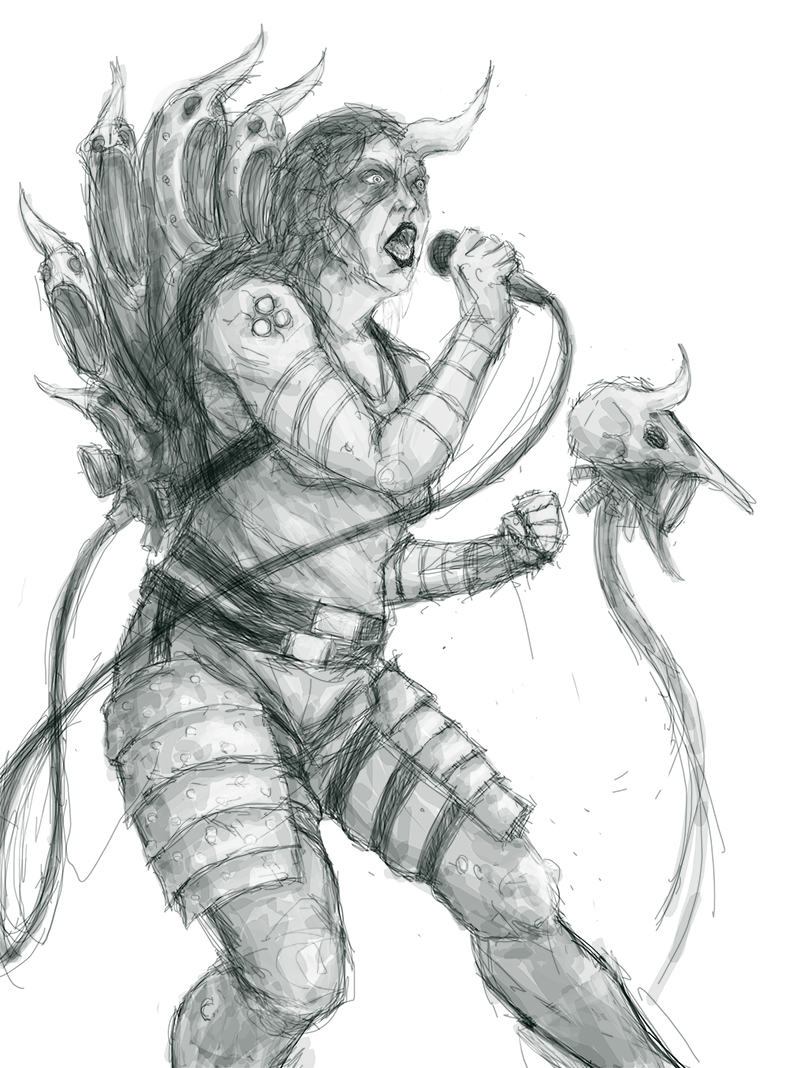 a swarm of nurglings with stomach mounted speakers could be fitting as well. maybe the rats are treble, Nurglings cover the mid-ranges, and maybe Beasts of nurgle bear the woofers? or just variable sized rats?

Beasts of Nurgle could prove a bit problematic - I assume that as daemons, they are untrainable, and would probably just try to play with the audience or the performers, which as we know, rarely ends well. Normal animals, on the other hand, could be trained or cyberized, and Nurglings are too small to cause real problems (well, aside from spreading disease, but that hardly matters to Nurglites themselves). I sense this calls for an item - "Carrier beasts", increasing the character's carrying limits.

Almost done with the siren. Needs a bit of cleanup and detail work but the overall mood is just about right as it is. 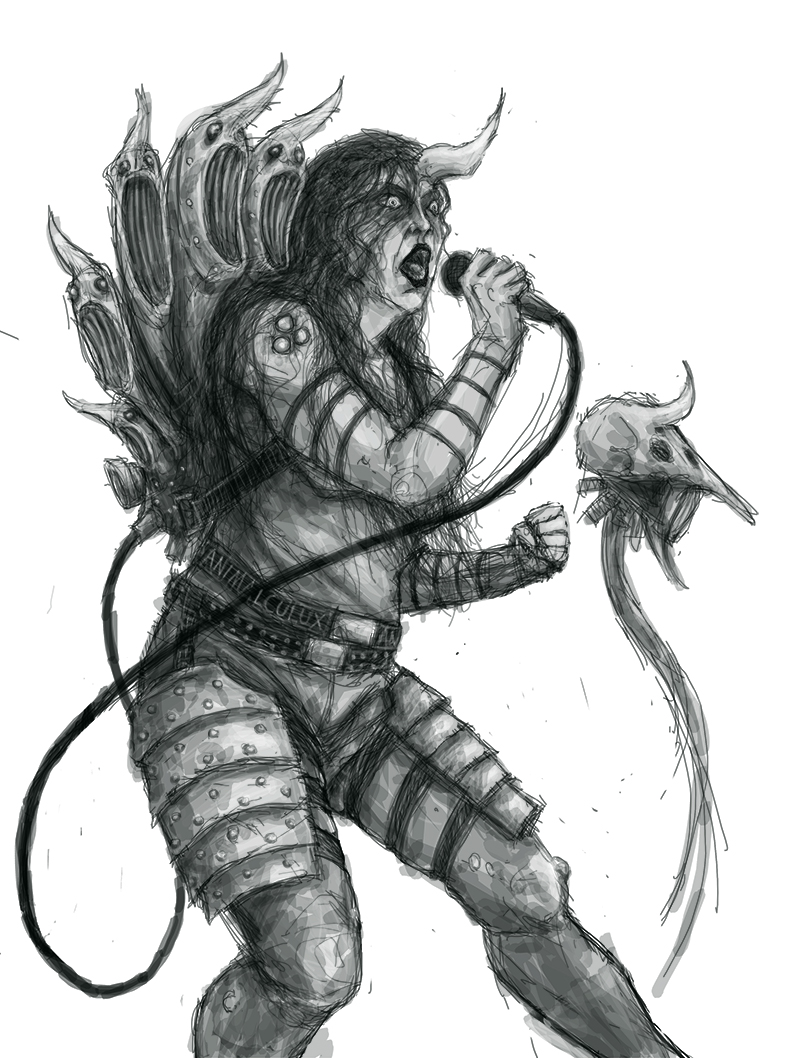 Alright, I'm calling her done. Now to concentrate on the rules again. 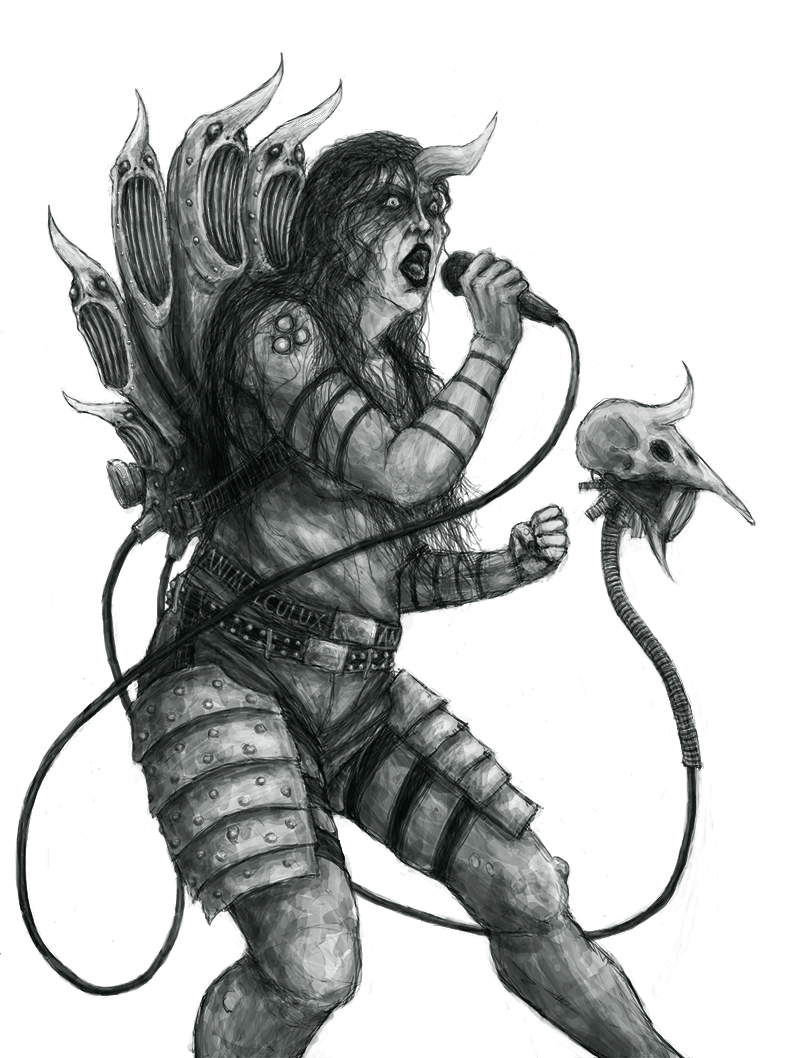