I've reached a new level of disorganization - I can't even seem to finish a simple piece of art without starting a new one. On the plus side, I'm really quite very happy with this one, an Imperviant. I need feedback on one thing, though: would it be too much to have a forearm bone sticking out of the arm clutching the side wound? 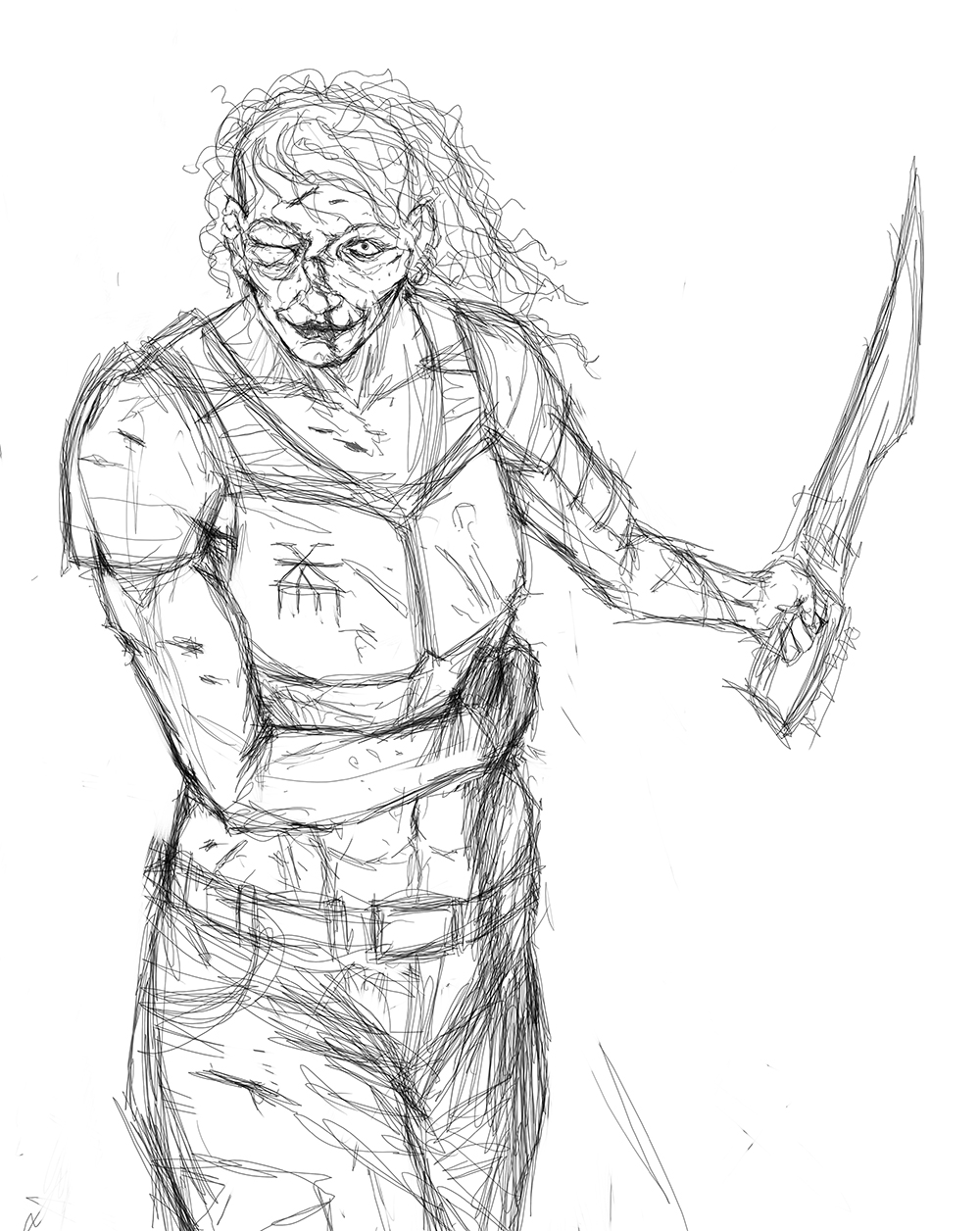 if the one is sticking out, they probably won’t be doing much clutching?
Reactions: HorribleHedgehog

I have to admit I'm not very knowledgeable regarding serious injuries, but shouldn't an arm be theoretically usable to some degree if the other forearm bone is in one piece and there's no serious nerve damage, ie. only one broken bone that punctured the skin in such a way as not to damage the musculature too much? Of course, using an arm in that state would be unbelievably painful, but that's the point!

i have to admit my familiarity with grievous bodily injuries is limited to doctor shows and horror movies (neither of which i’m a fab of )
Reactions: HorribleHedgehog

I'll have to ask around - I'm sure there's someone in the sites I frequent who can give me an expert opinion.

Bandages, stitching and scars will certainly also feature, but I want the focus of the picture to be on recent, untreated injuries - like they've just taken their opponent's best shots and smiled all the way through.

So, according to my research it is indeed possible to use an arm with a compound fracture - excruciatingly painful, of course, but that suits this piece just fine. I got a lot done, though there's still plenty of fiddling and cleanup to do. The wound-clutching arm in particular is turning out to be a royal pain. I got the hand to proper proportion, but now the forearm is looking too short... I'll have to see about fixing it tomorrow. 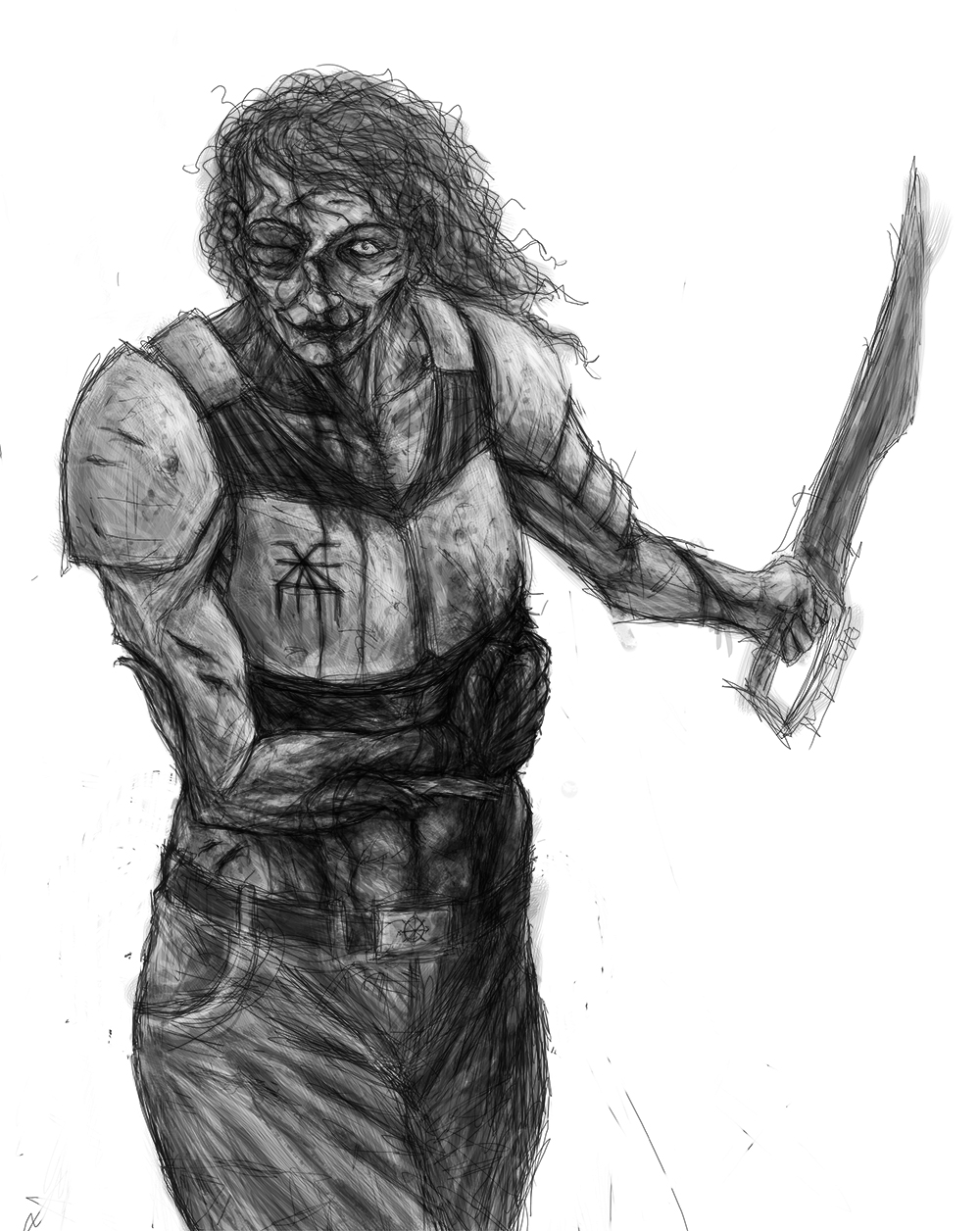 Okay, the imperviant is done. I've been really inspired by this specialization and will probably try to come up with a talent tree and fluff for them next. 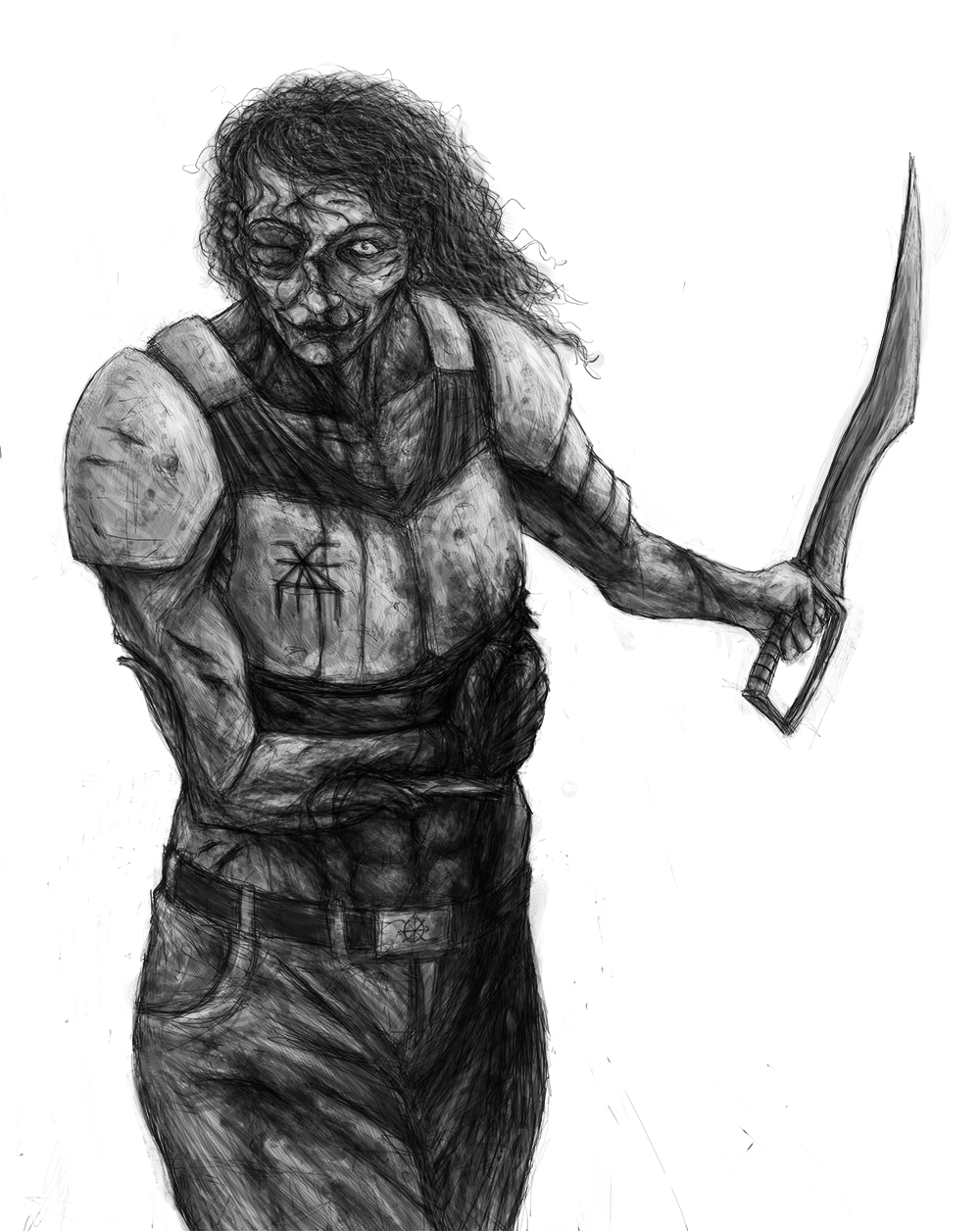 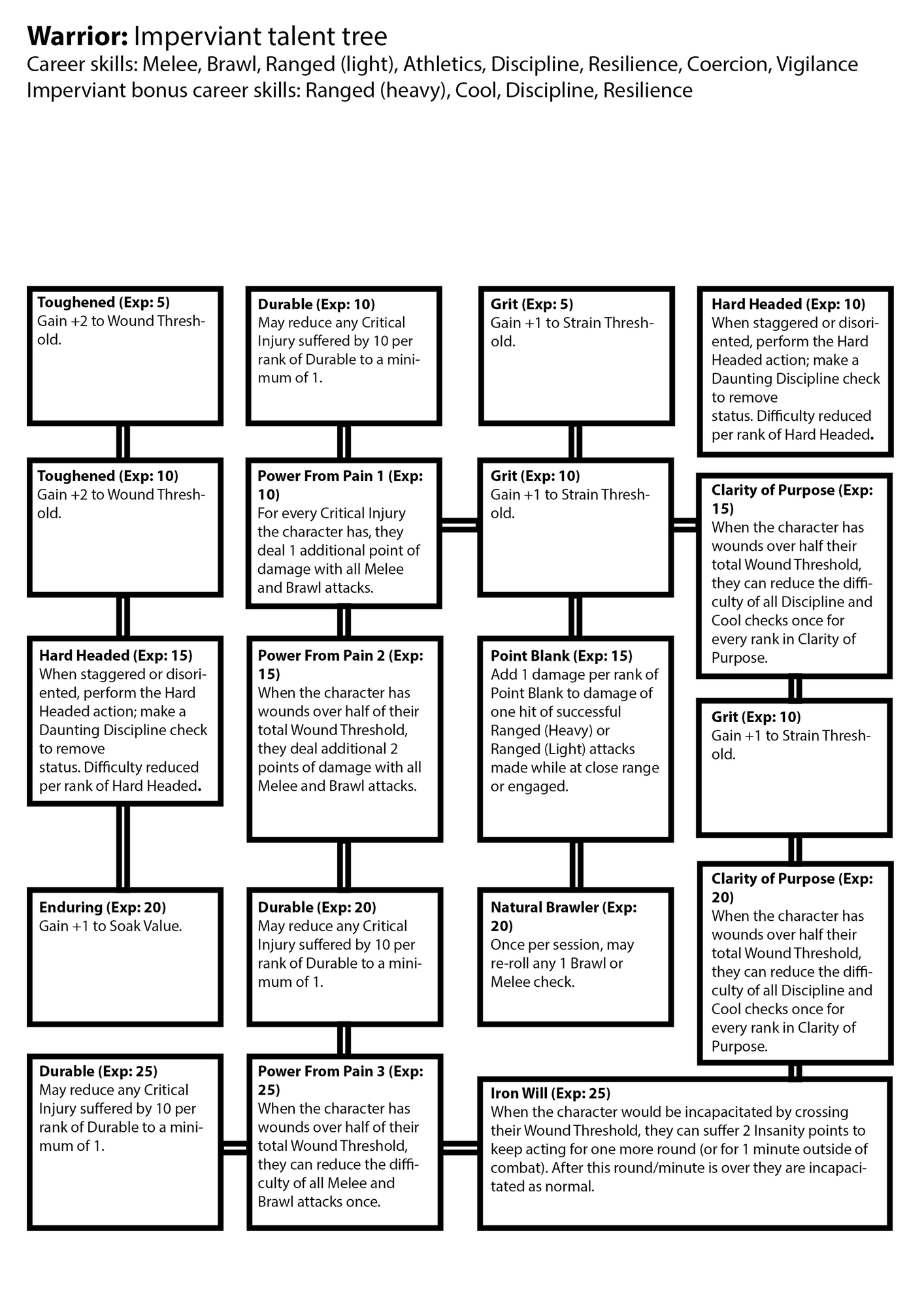 I wasn't happy with the talent tree, so I fiddled with it. Feels about right now, although it's difficult to tell without playtesting. 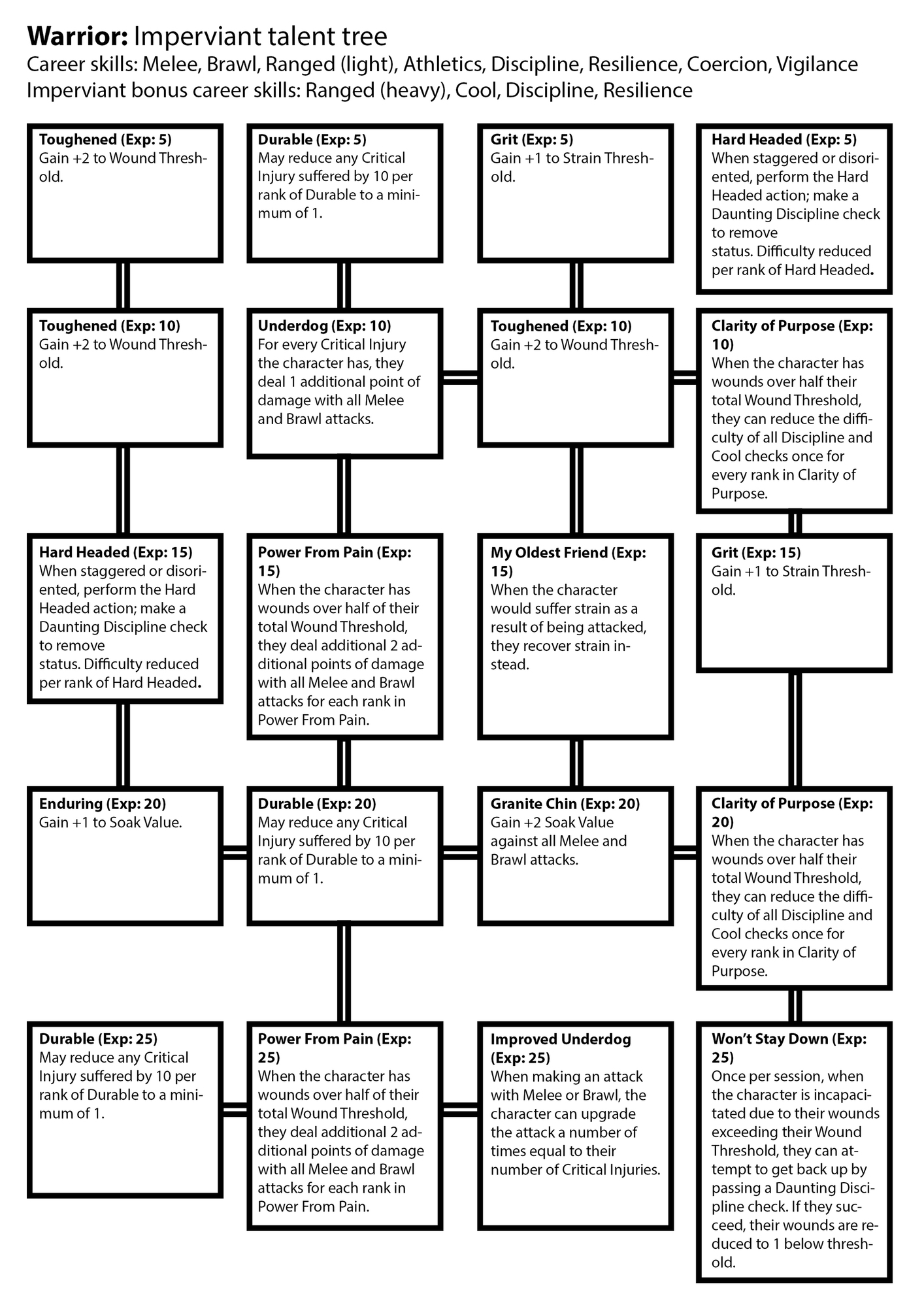 i’m not familiar with the EotE system, so i can’t really comment on the trees. i mean, it seems ok to me, but i dunno

I just realized I haven't drawn any of the stealthy classes yet, so I set about rectifying this by starting on an illustration of a hunter. 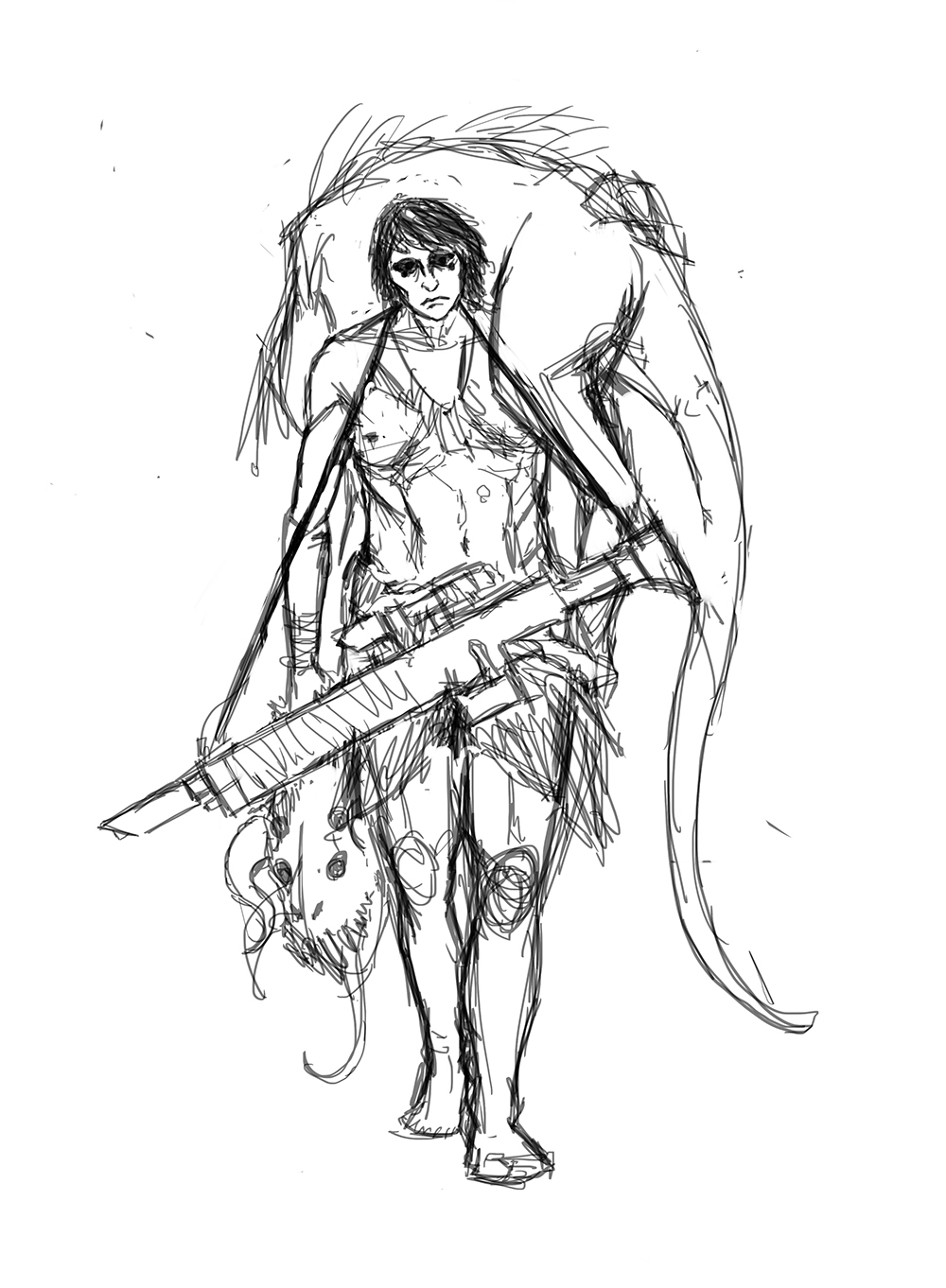 Did the talent tree for the pit fighter. That's 2 specializations down, 13 to go... 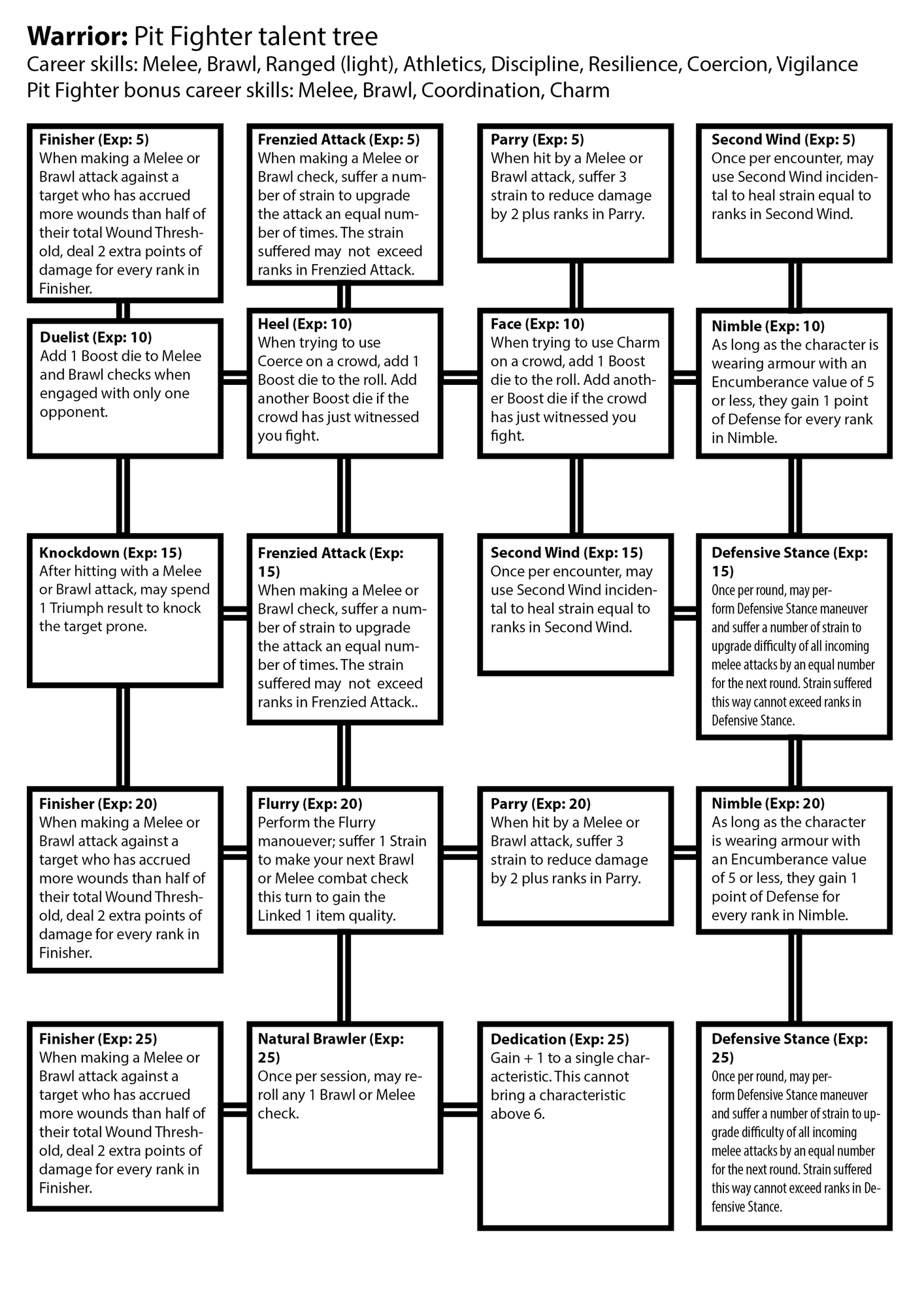 It's been a productive night - I got the Champion's talent tree done as well. With that, I've officially finished 1 out of 5 careers! Woo! 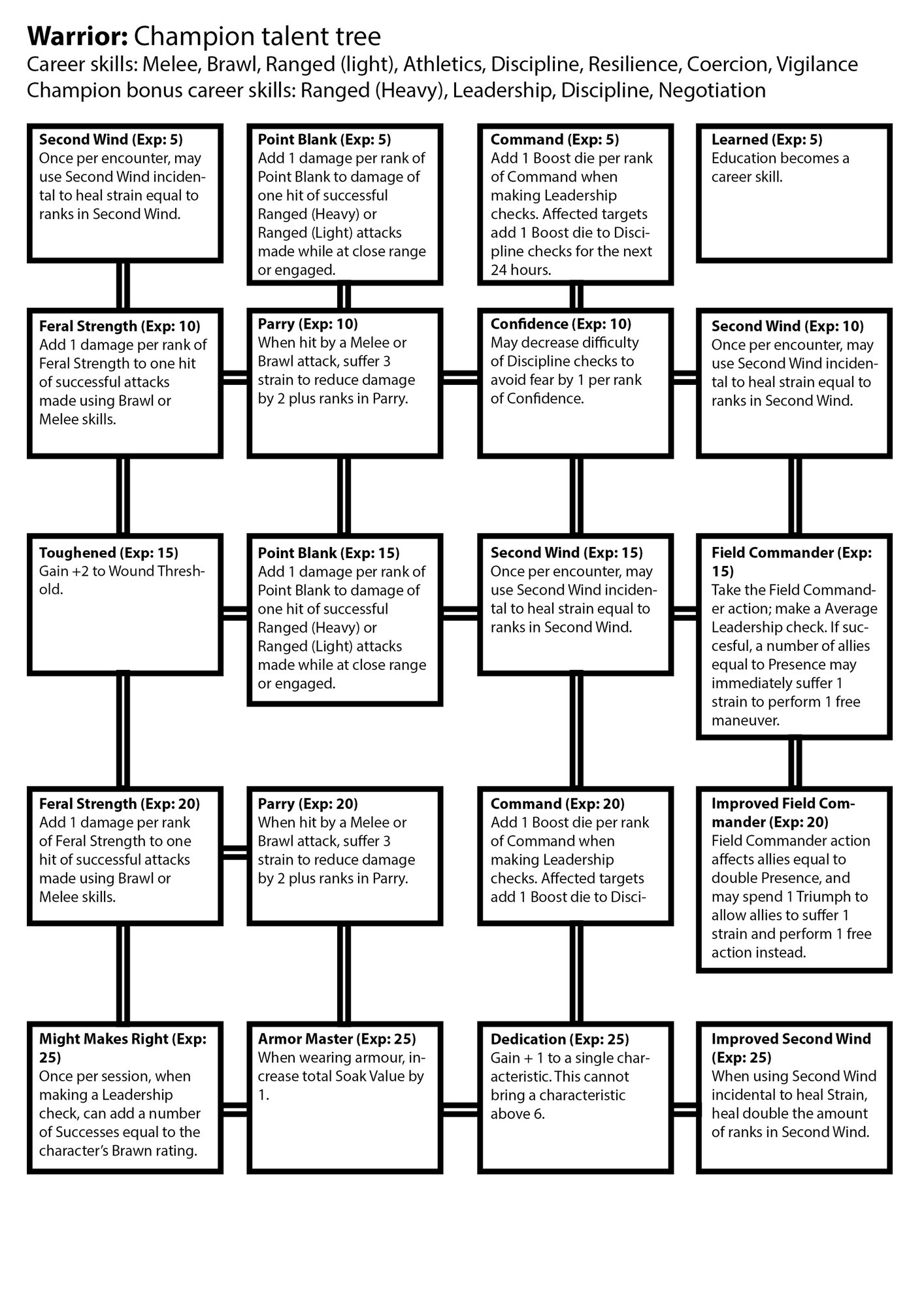 I'm on a roll; the hunter and the scavenger now have talent trees. 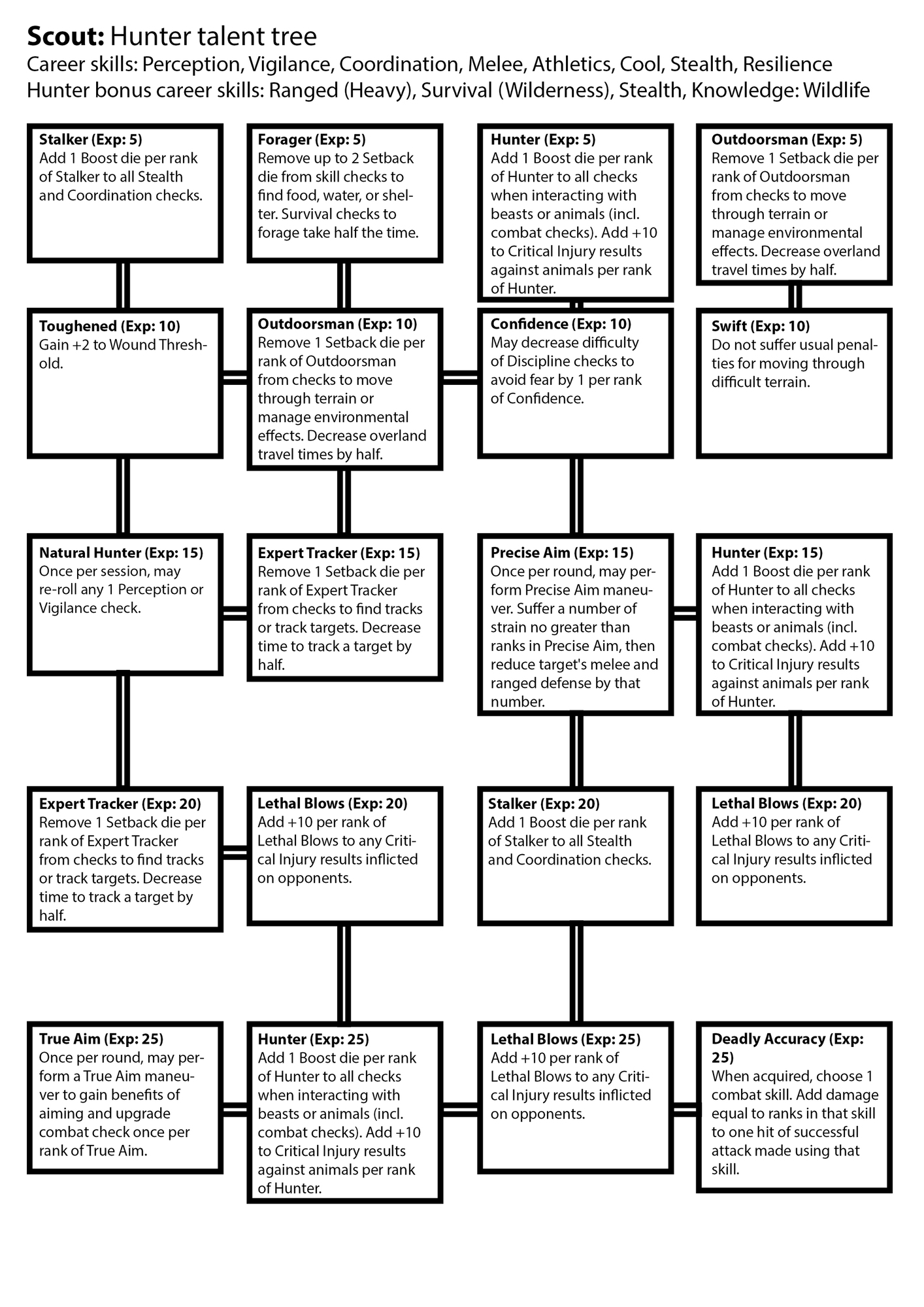 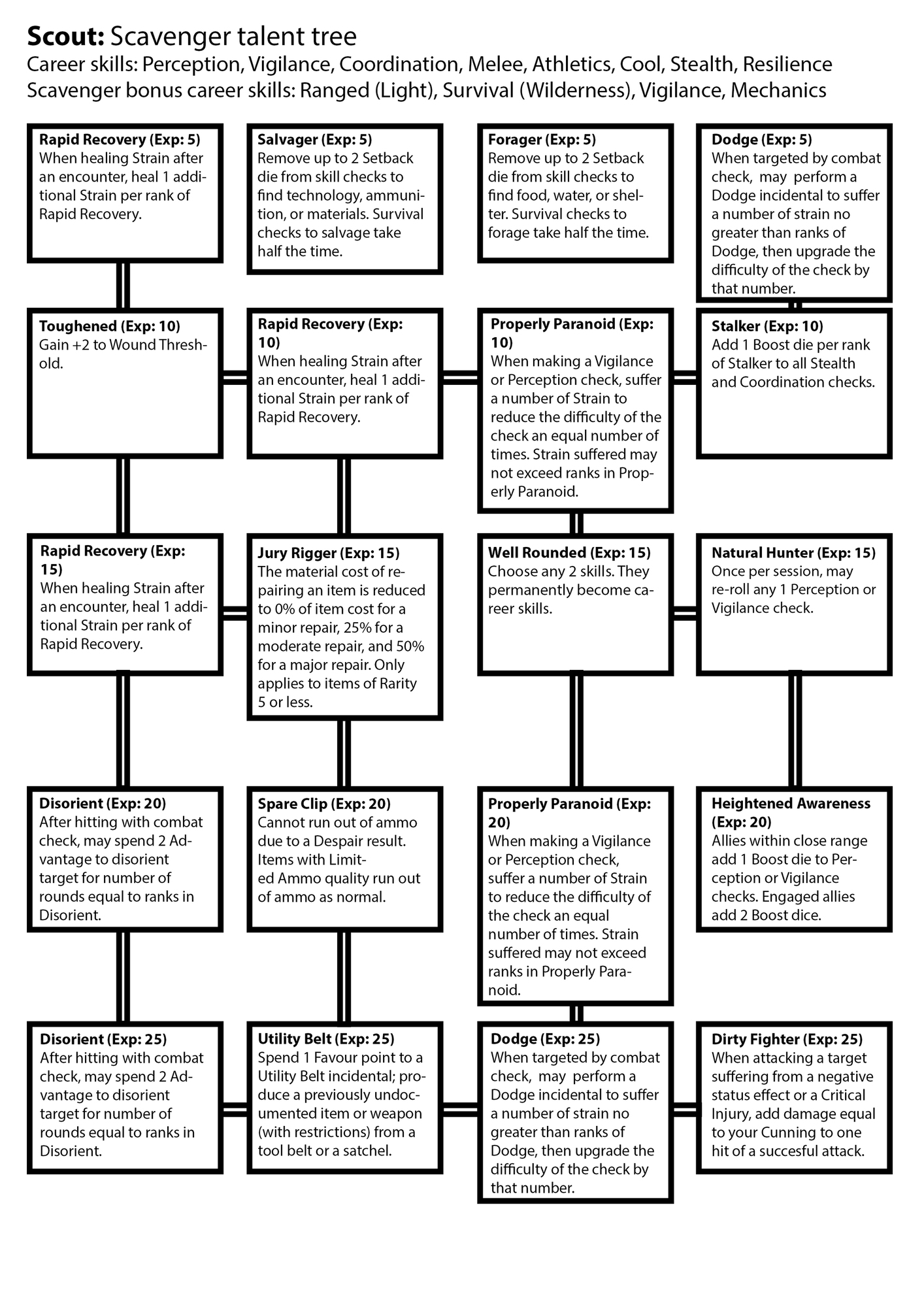 I haven't updated this thread for a while, since I've mostly been making talent trees. I'm now stuck on the psyker ones - it's difficult to balance the risk/reward ratio of psychic powers - so I figured I'd relax a bit thinking about some background stuff. Hence, the prince's bodyguards and enforcers, a band of renegade space marines known as the Mournguard: 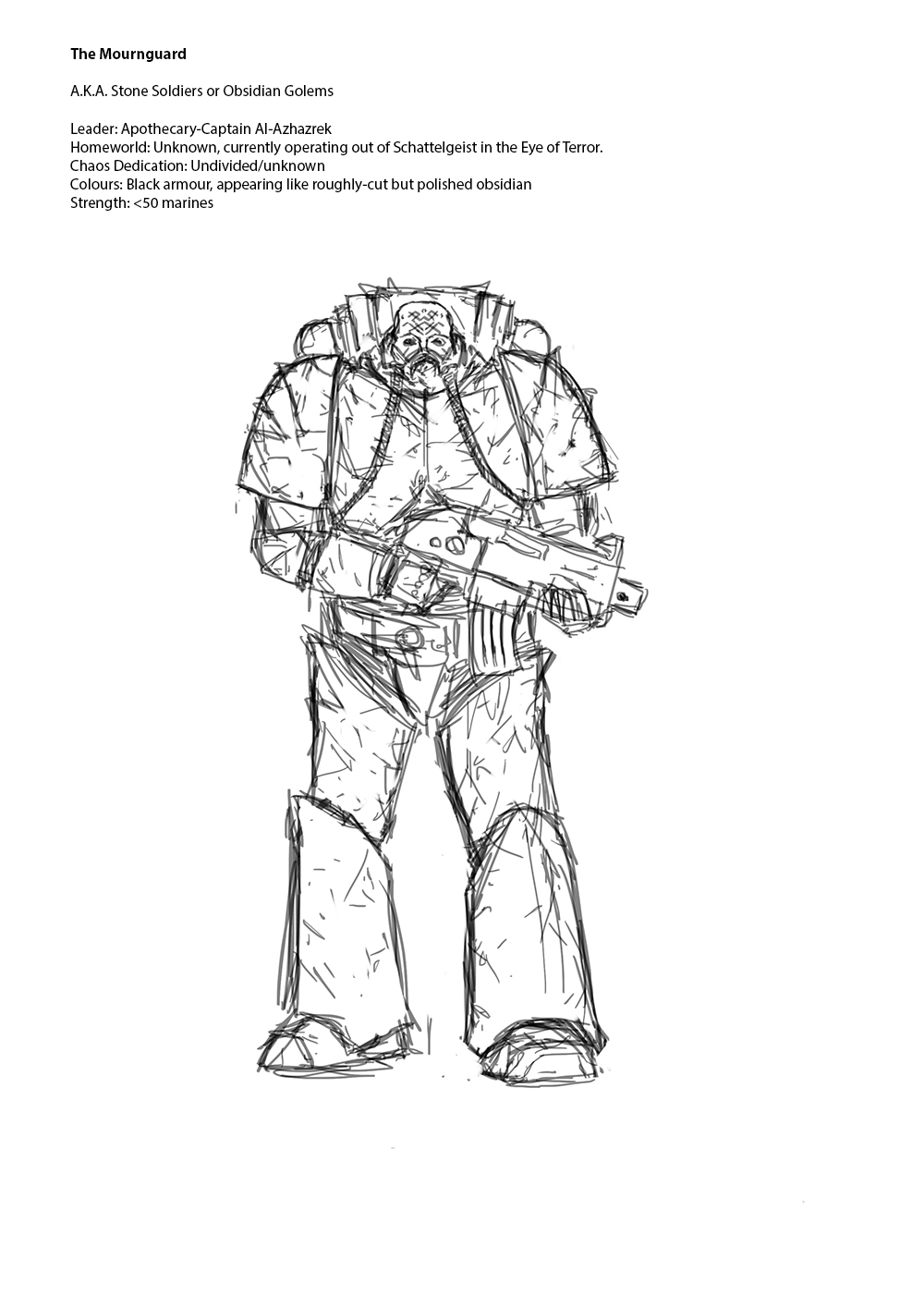 An imaginary cookie for those who get the reference

I'm still nailing down a backstory for them - I'm currently at "a company of loyalist marines were sent to the Eye to chase a mysterious band of renegades who stole some nifty relic, were defeated and tortured by the prince's forces, broke down and swore allegiance to the prince, and were sent out to steal the relic from their past selves in a baffling display of warpy time-****ery." I'm not sure if that works.

I dread having to paint the shiny obsidian armour. I'm taking for suggestions on their culture, combat doctrine, backstory, anything really.

no, i think the warpy time-***kery works fine. “how do they know our fortress monastery so well?” “how did they break into the vault? what do you mean they didn’t?!?” and that sort of thing.

i think the rest of the questions around them would depend on their Loyalist origins. Are they an official chapter? were they one you’ve invented? that could determine a lot of their “culture”. do they follow corrupted versions of their old doctrines? have they embraced the opposite of what they used to believe? maybe they have a whole set of beliefs based on the Prince with just a few die-hard ingrained practices left behind (like bolter drills or armor care)
Reactions: HorribleHedgehog and trollmeat

Punktaku said:
no, i think the warpy time-***kery works fine. “how do they know our fortress monastery so well?” “how did they break into the vault? what do you mean they didn’t?!?” and that sort of thing.

i think the rest of the questions around them would depend on their Loyalist origins. Are they an official chapter? were they one you’ve invented? that could determine a lot of their “culture”. do they follow corrupted versions of their old doctrines? have they embraced the opposite of what they used to believe? maybe they have a whole set of beliefs based on the Prince with just a few die-hard ingrained practices left behind (like bolter drills or armor care)
Click to expand...

I spent some time thinking about the story and got some more details straightened out. The chapter they hailed from was known for their strong bonds of brotherhood, and the marines' torture included intense psychological manipulation to make them believe the whole chase was nothing but a suicide mission to rid the chapter of "undesirable" brothers. Part of their deal with the prince included getting some payback on their chapter.

The process of their corruption instilled them with a strong sense of paranoia; though nominally loyal to the prince, they trust no one outside their group and only look out for themselves. Captain Al-Azhazrek, former company apothecary elected to leadership position after the previous captain fell, is fanatically devoted to preserving the lives of his men at any cost.

I think going with an original chapter is the easiest route. In addition to their origins, their present situation probably also influences their combat doctrine a lot; they're too few in number and consider their brothers too precious to risk in frontal assaults, for example. I doubt they have any qualms about employing underhanded tricks or terror tactics either.

I've been busy with school for a bit, hence no progress on the ruleswriting front. I have, however, done some landscape paintings: 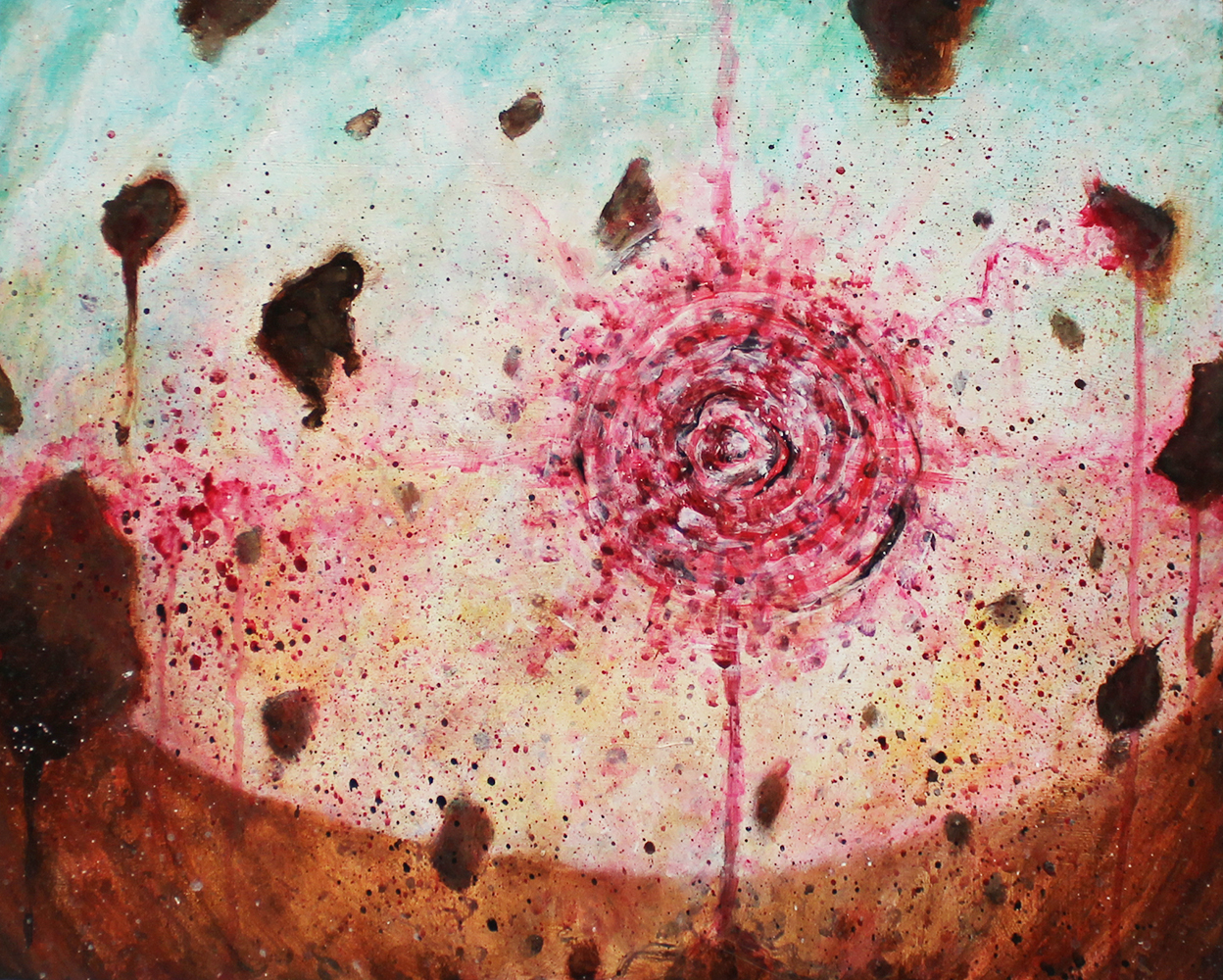 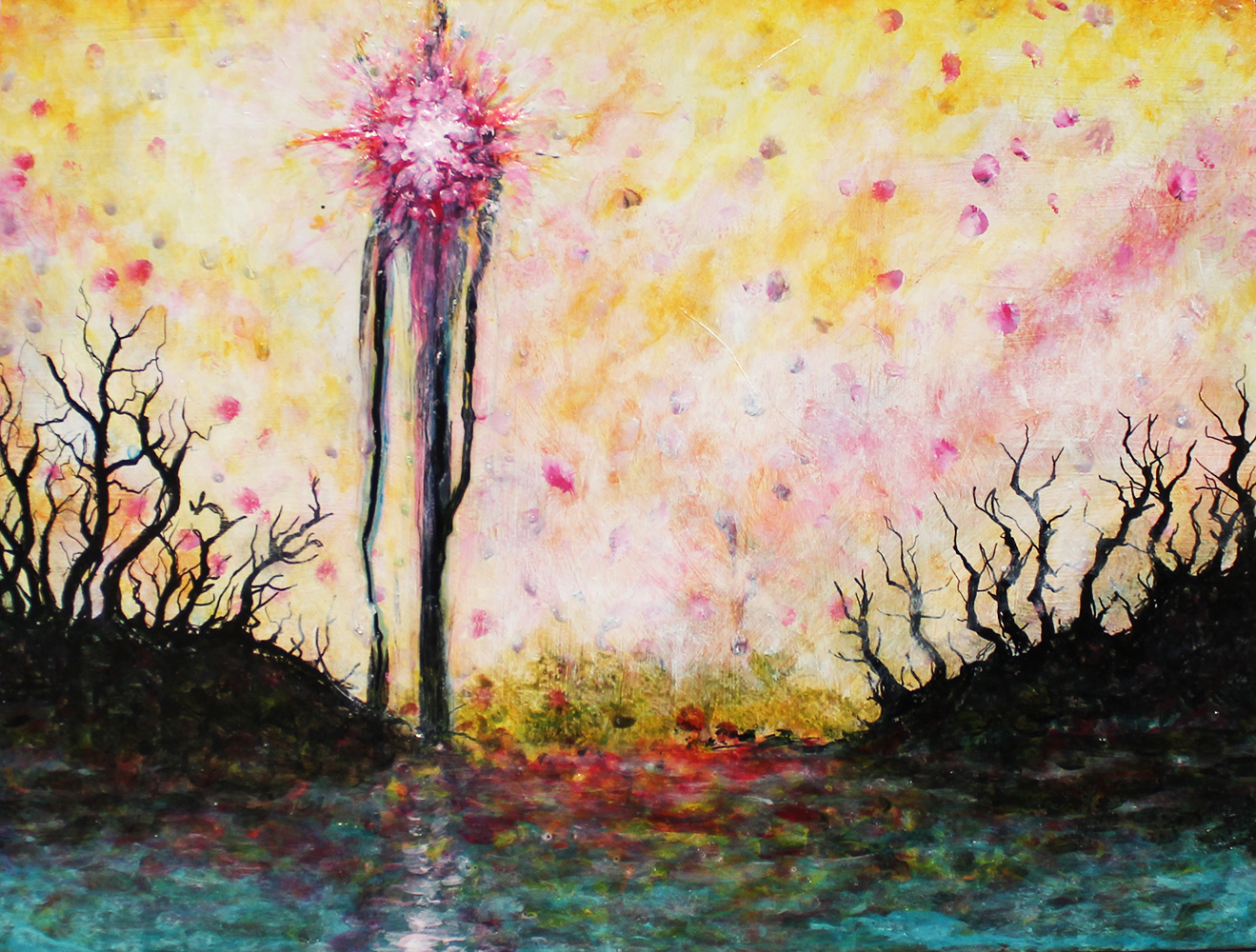 I've also been thinking some more about the Mournguard's combat doctrine. Due to their limited numbers and desire to maintain them, they make heavy use of human auxiliaries, always maintaining as strong a force as they're allowed (probably on the region of 300-500; I doubt the Prince would allow them a force that would be a serious threat to his power). These auxiliaries are moderately well trained and equipped, but nevertheless expended ruthlessly as needed in diversionary attacks while the marines' strike teams perform terror raids and decapitation strikes to demoralize the enemy.

I also thought the marines could have small deposits of obsidian-like mineral forming on their skin, because why not - It's the warp, I ain't gotta explain shit.

I got some ruleswriting done - in my effort to put off working on the psychic powers I statted up some basic enemy NPCs. Little EotE-exposition on enemy distinctions: Minions are basically mooks, often encountered in groups that act as one, while Rivals are more dangerous (but still largely inferior to player characters) individual enemies. There's a third category, Nemesis, who basically boss enemies/recurring villains. Here I've got basic Minion and Rival types for wasteland tribals, with stat variants by deity and some equipment options. 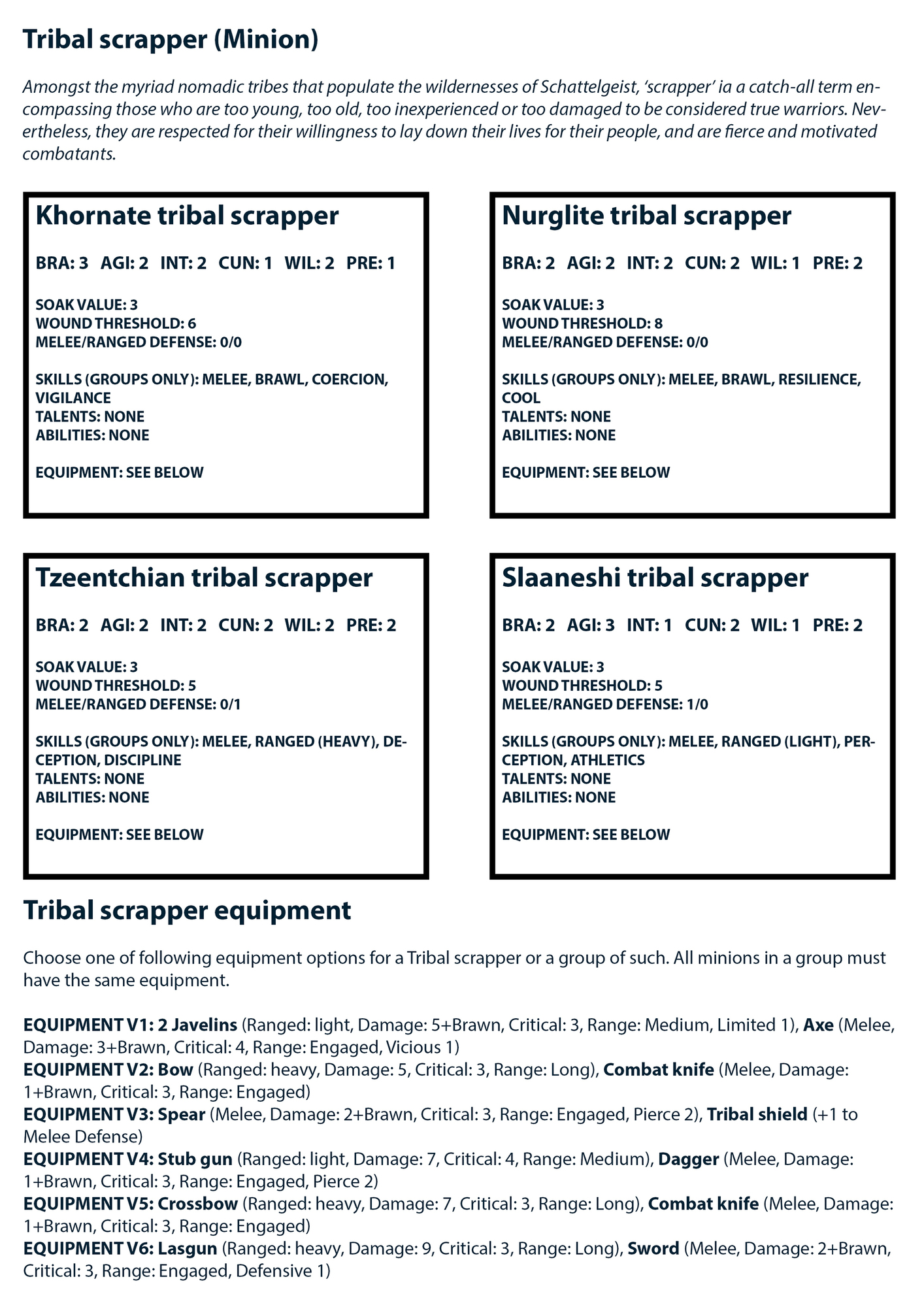 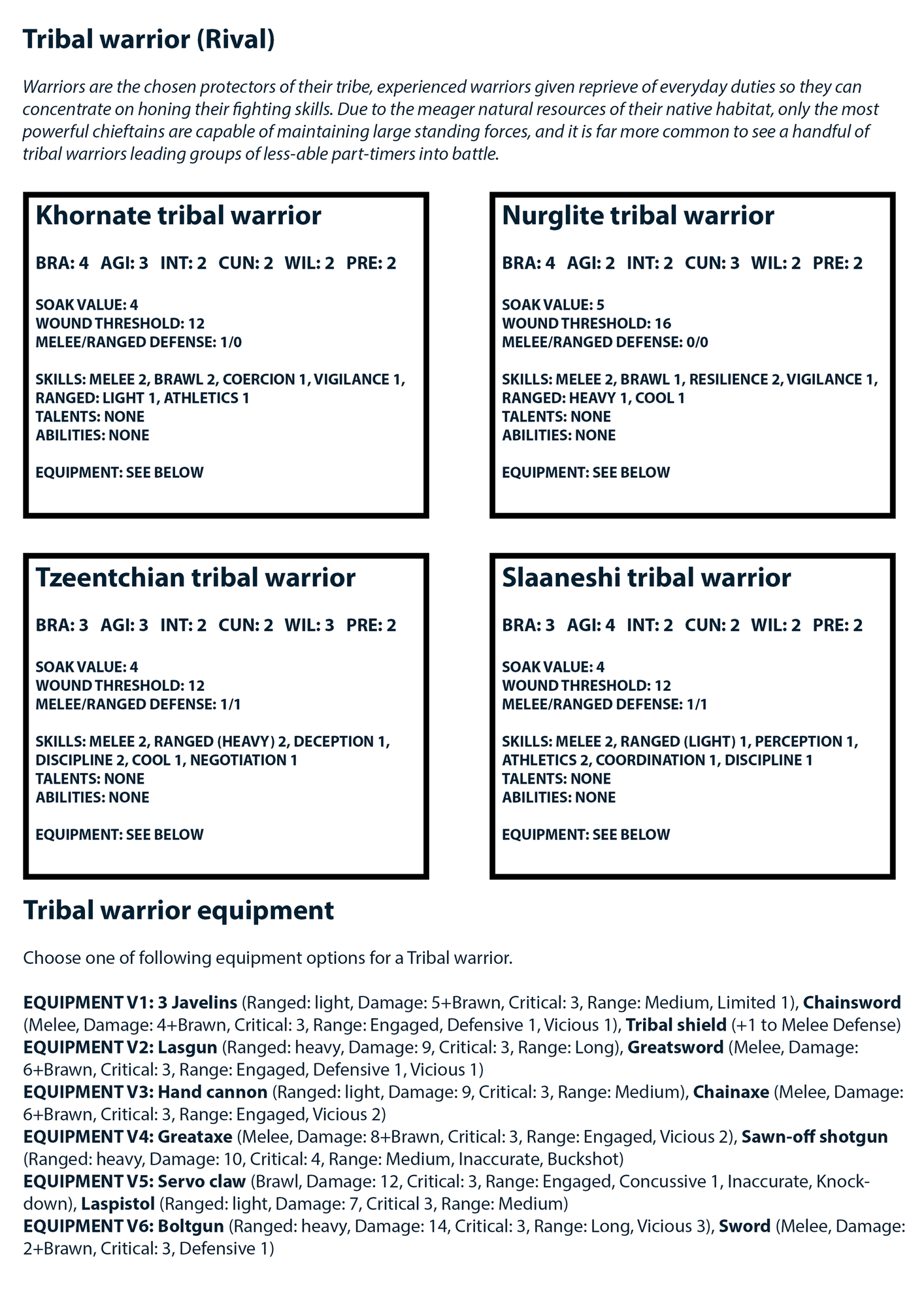 Further generic NPC adversary ideas, organized by affiliation or habitat - I'm taking suggestions to fill out this list (Edit: I marked the ones I've done already):

RL's been pressing as of late, but I've got some more generic NPC templates done. Tribal mechanic, witch and the first Nemesis of the bunch, tribal leader. That's the tribals handled, at least. I also added beastmen to the list of NPC factions, since there'll definitely be some lurking in the most inhospitable corners of the planet. 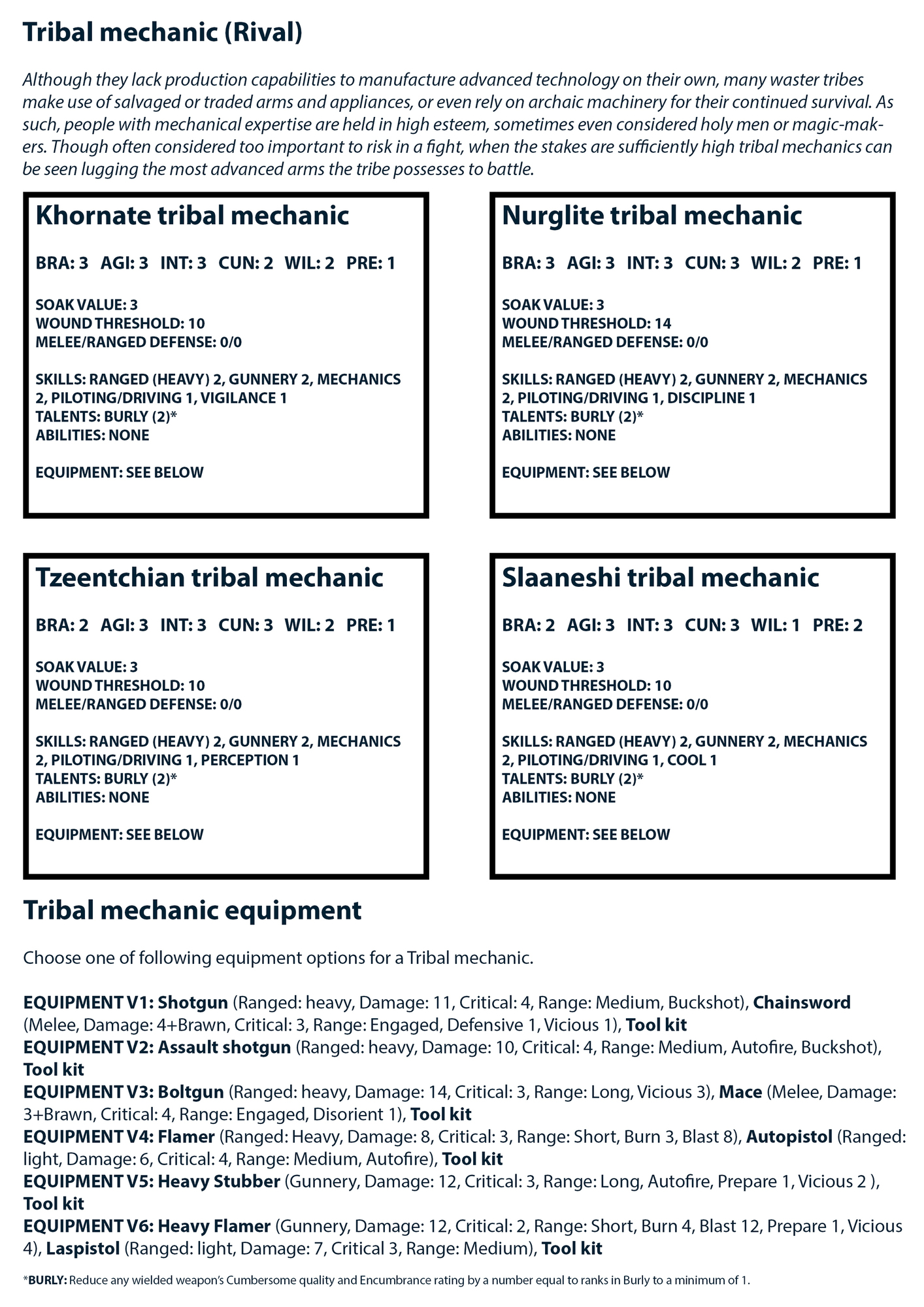 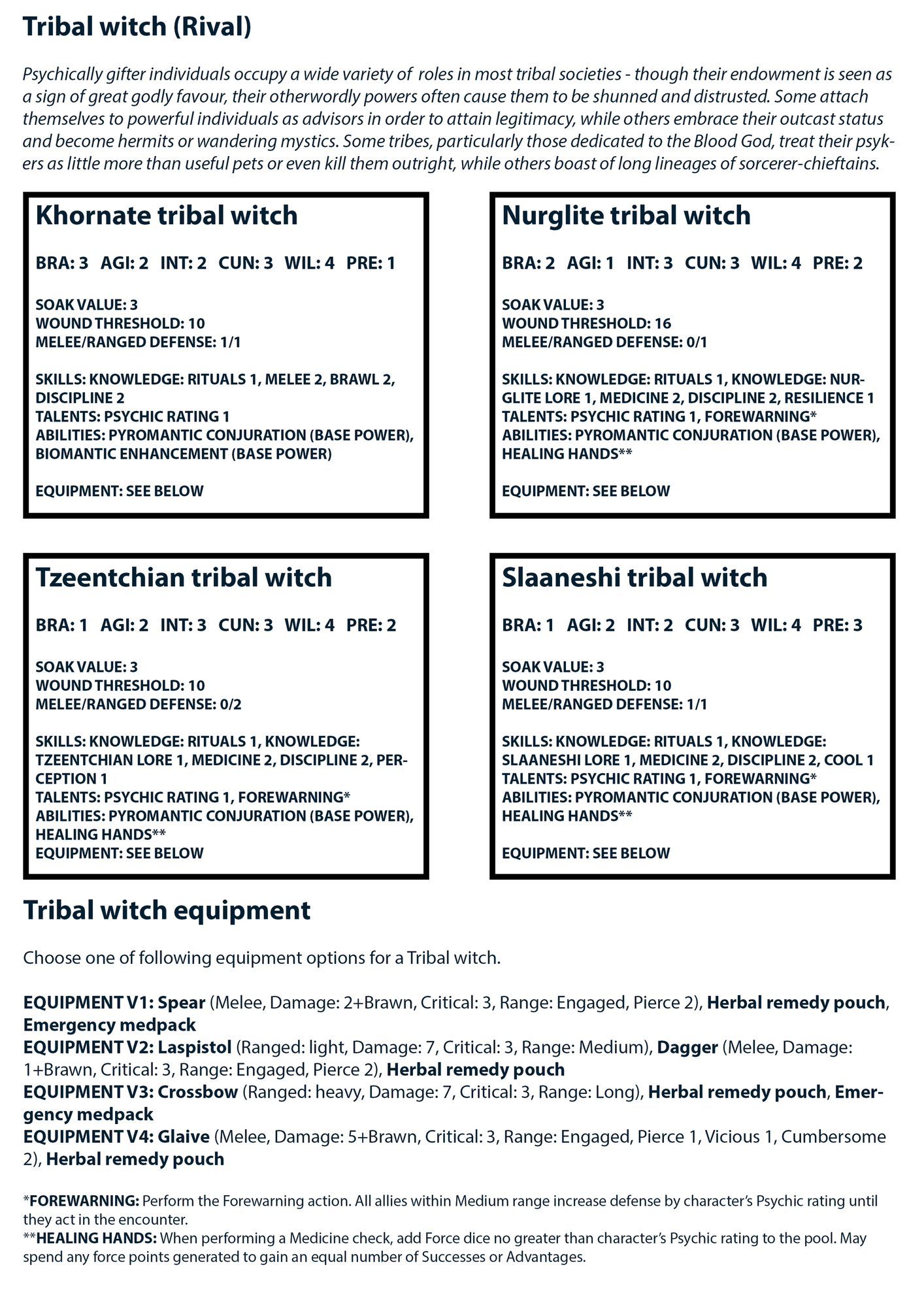 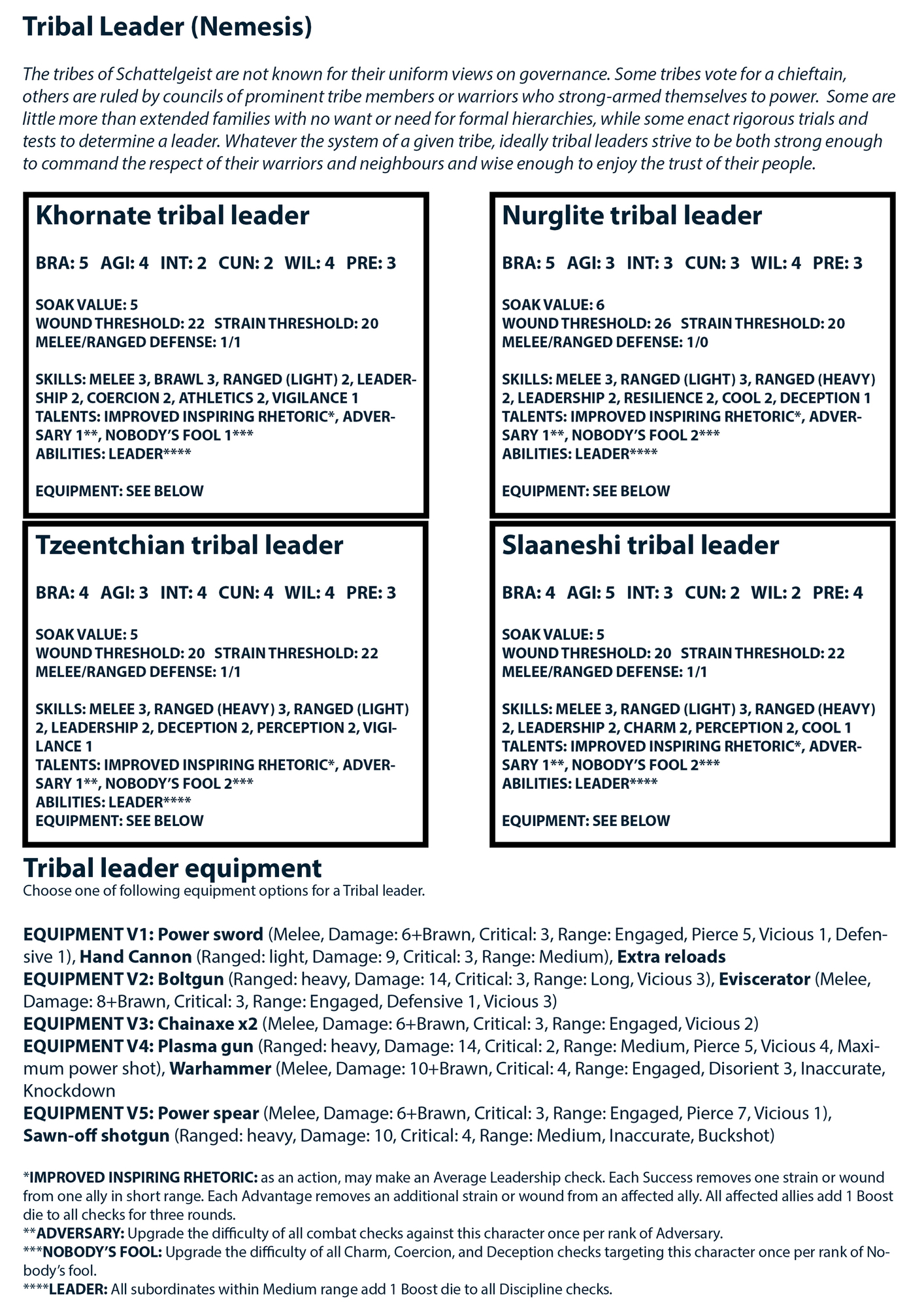 Once again, I've been busy with RL, but at least I've gotten some more adversaries statted out. Noble warrior, hiver conscript and Mournguard marines, for when you absolutely need to teach your players a lesson in humility. 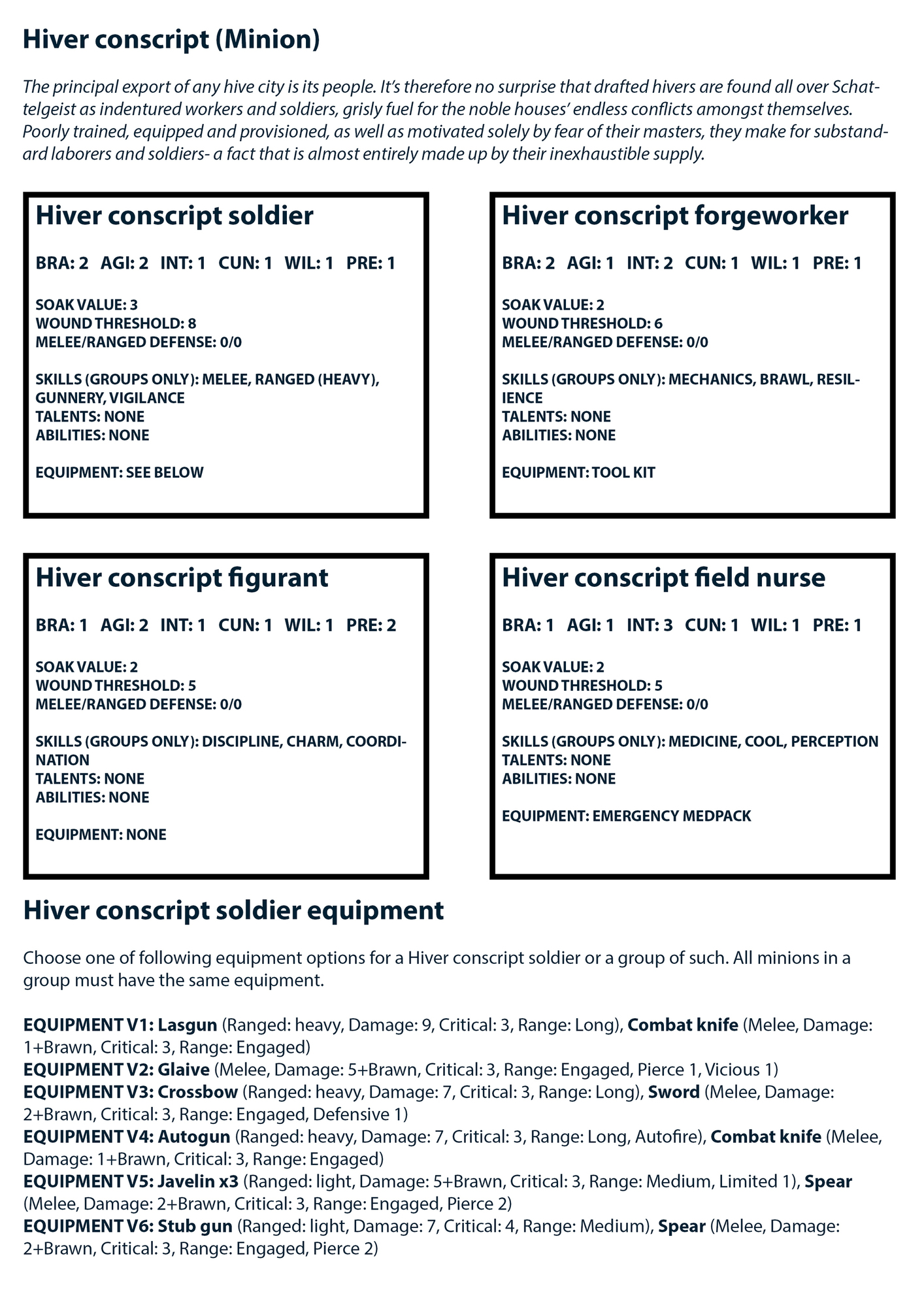 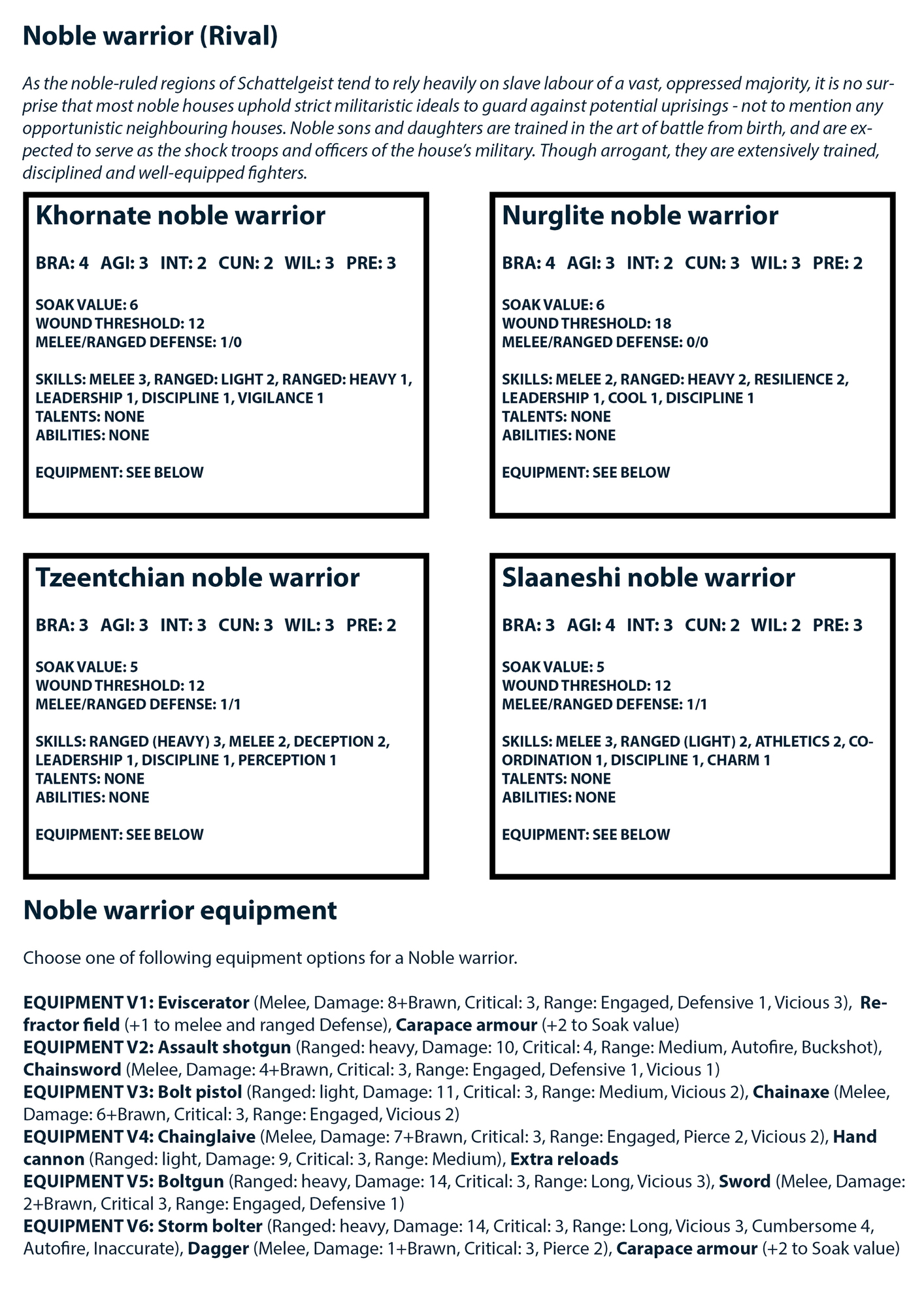 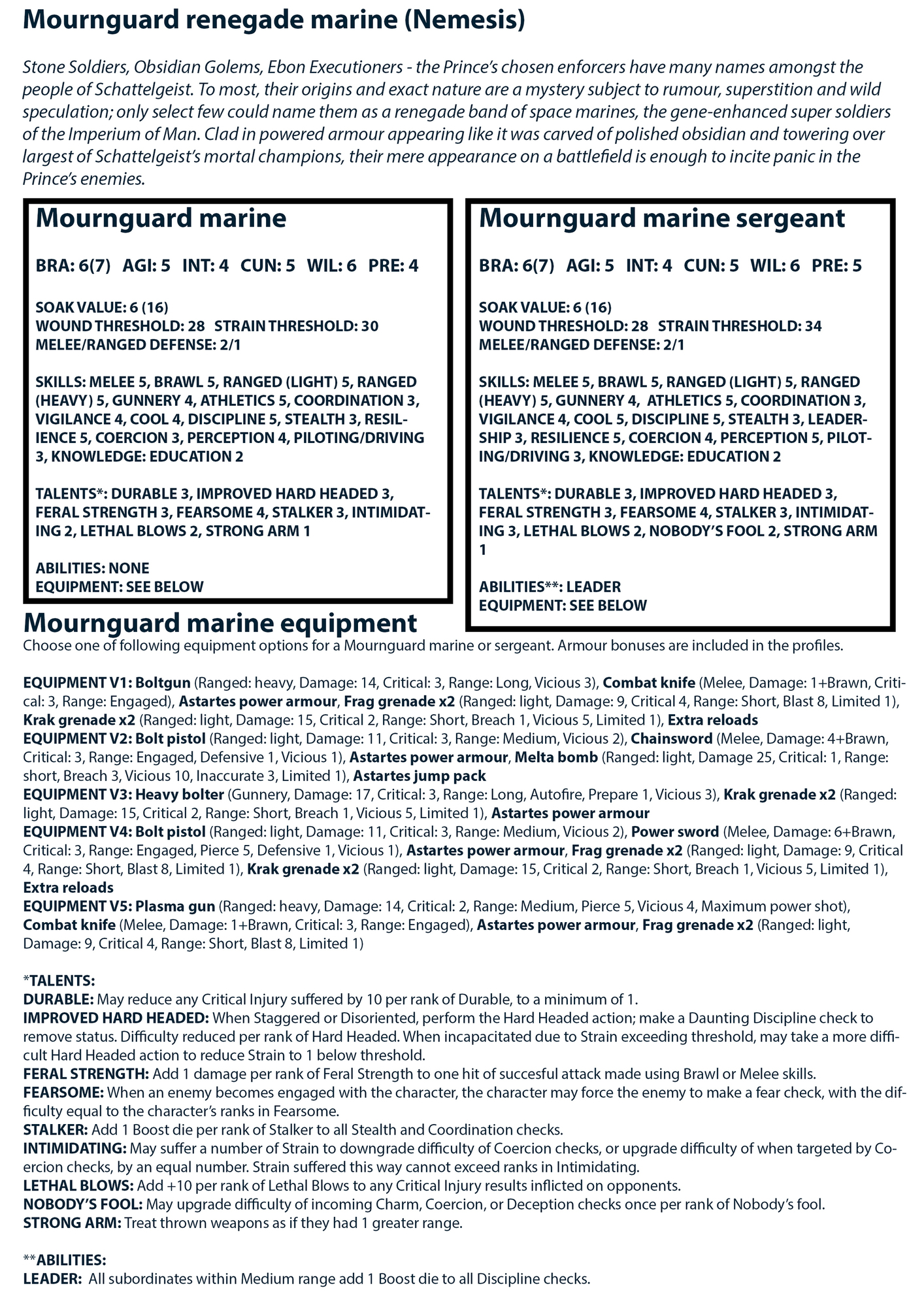