I've been on a civilian vehicle kick for a while. I'm going to do like a parking lot and a motorbike store.

I found some other affordable trucks, etc. from Driven, and Maisto brands. Some of the 6 wheeled Maisto Quarry Monsters would make great land train lead vehicles. 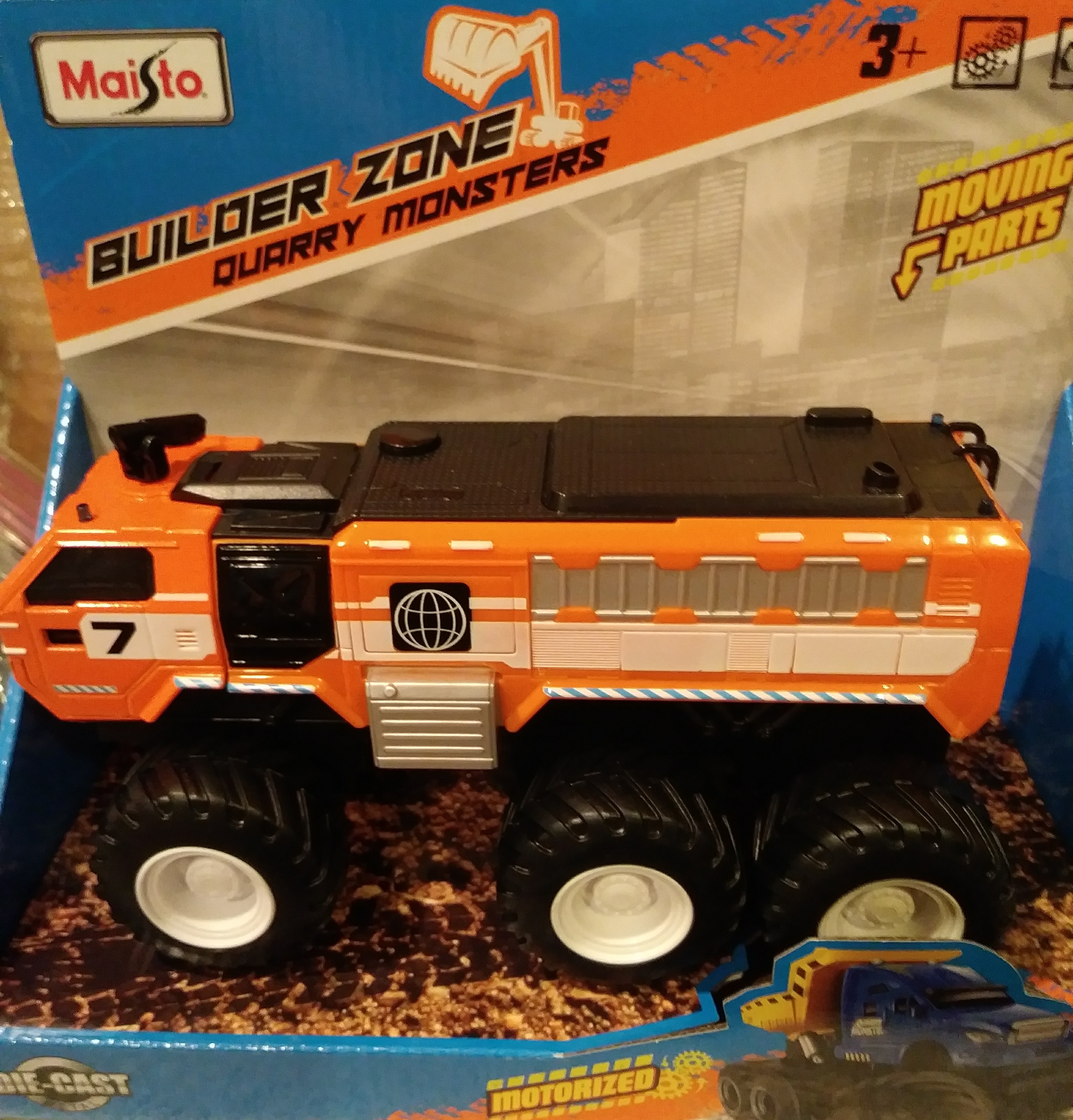 Cargo 8 Ridgehauler substitute. $11
Reactions: Raindog, nooker, Stoof and 7 others
B

If it's in scale, that looks great.
Reactions: Sundown Dreamer and Mr. M
P

Ben_S said:
If it's in scale, that looks great.
Click to expand...

Maisto 2022 catalog says those vehicles are approximately 8 inches long but offer no scale.

Yes they are in scale, judging by the cab door and ladder in back.

Found this bit on the bottom keeping the three-pack together. Usually this is a cheap flimsy plastic, but this thing is surprisingly firm. Got two. Think they’ll make good sump seas obstacles. 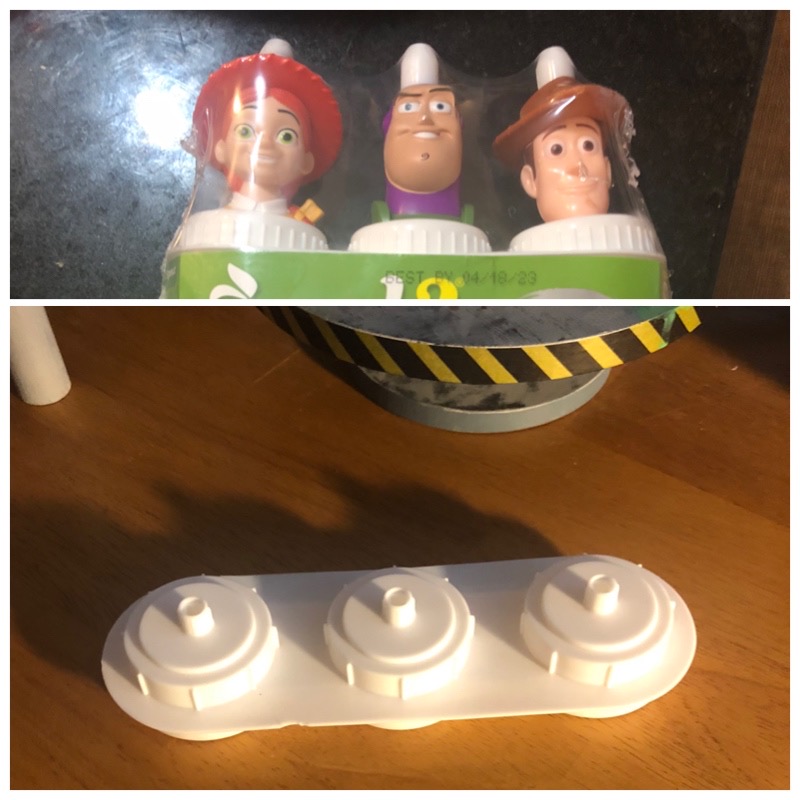 They look like vats built into the ground. Kind of like in ground septic tanks or sumps with pumps if you add some pipe work coming out of the top.
Reactions: Grognard Gluefingers, Stoof and cz_Samuel

These are some sort of weird twisty fidget thing my kids are/were into. They snap apart into nice pipe bends and are a nice, hard plastic! 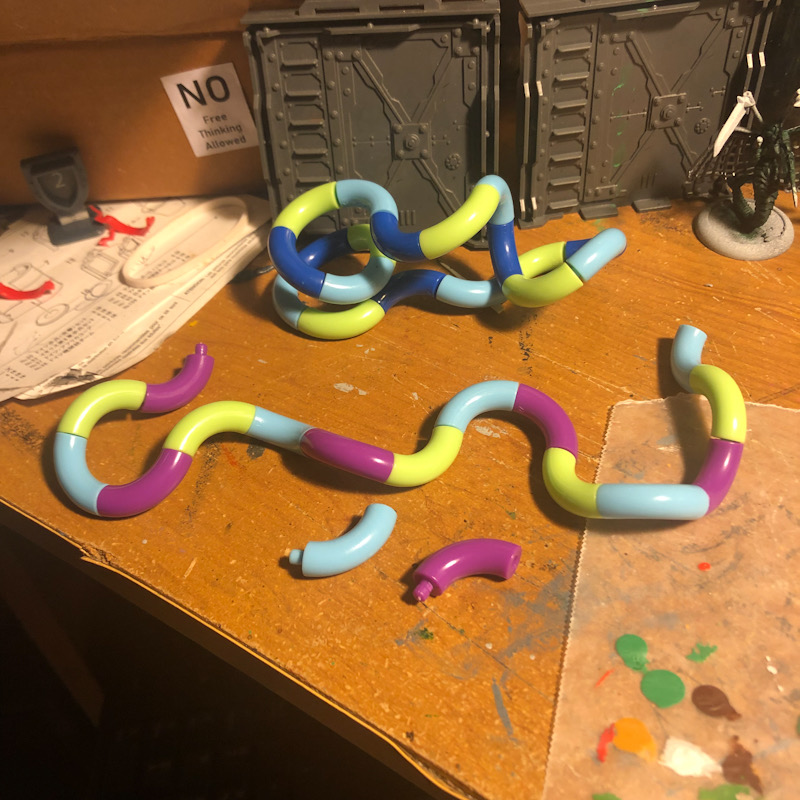 Gonna quote myself here from the "what's on your mind" thread, because here is more appropriate:

I was in Smyth's toys today with my kids and spotted some really cool ships from the Lightyear film, they're called the "Hyperspeed Series" - they're not particularly expensive (£9.99 each) and they're a pretty good scale for Necromunda/40k. Good spaceport terrain I thought. I particularly thought the number 15 one looked fairly 40k, but I like the no.2 as well. 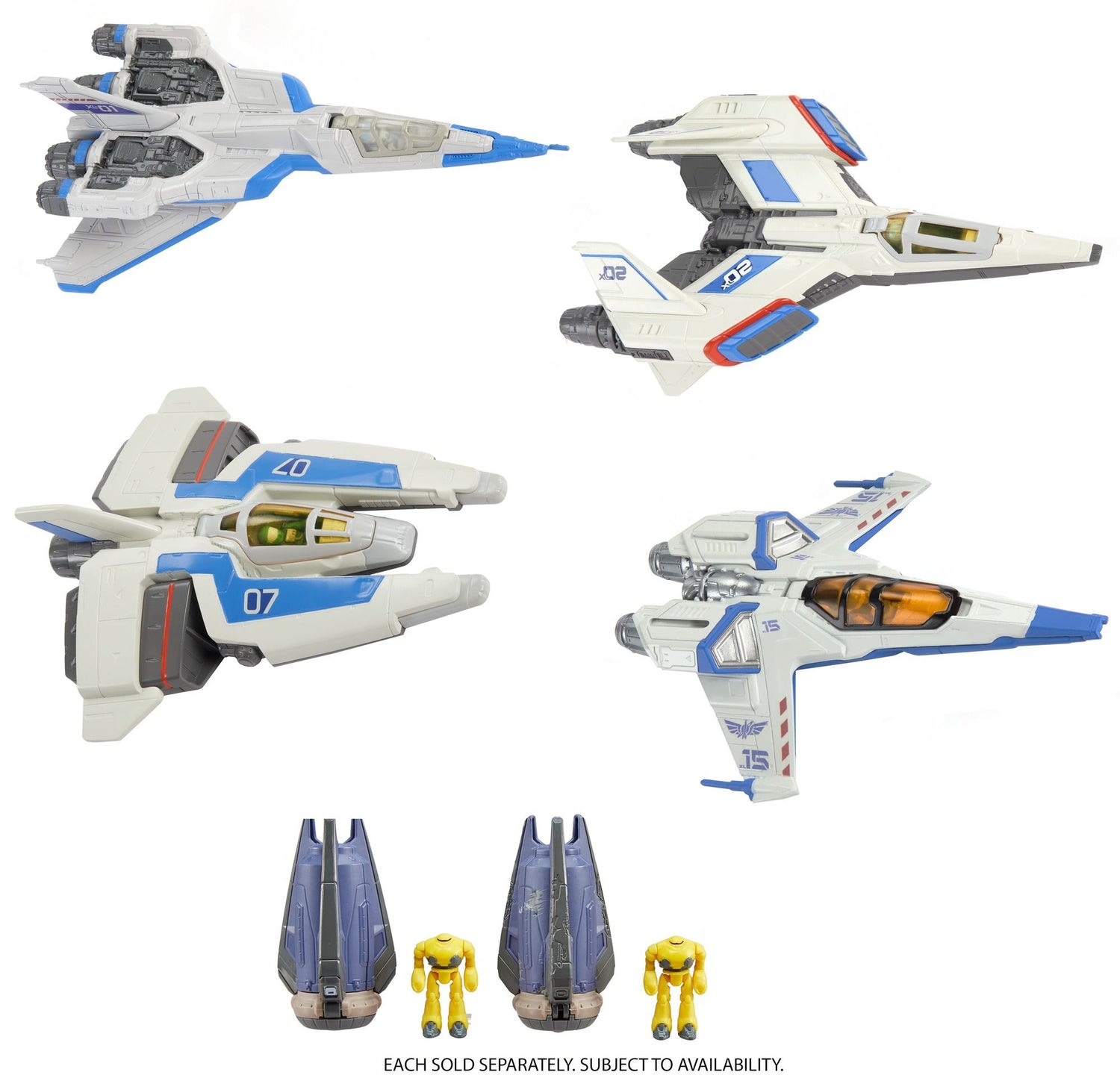 I knew I'd seen a very similar 40k design, but I want sure what it was called. It also reminded me of the old Wipeout ships.
Reactions: Tiny

The McDonald’s toy I turned into a shuttle looks nothing like any of those…. I wonder which one it was supposed to be…
Reactions: Tiny

I just noticed that the drop pods even look like 40k ones.
B

I saw someone recommend these in a FB group:

£7.49 for a 50 piece tub, which is 25 animals (in various different sizes/scales - some of which may be useful) and 25 pieces of seaweed-type stuff. Here are the two highlights of the set with a 1990s Goliath for scale. These ones, at least, look better than I expected.

View media item 78488
Quantities do seem to vary. I think I had five of the green piece on the right, which could pass as a gnarled old tree with a suitable paint job, and four of the piece on the left, which looks like some kind of weird alien vegetation. Plus at least three other types which are a bit less promising (rather two-dimensional) but probably still useable somewhere. And I think I'll find use for at least a few of the animals too.

Edit to add: These were an Aldi 'special buy' advertised as starting on the 4th. I made a special trip to my local store on the day and they didn't seem to have them yet, but my mum managed to pick these up for me from another store. She said this was the last of the aquatic animals on the shelf at the time. They do also have dinosaurs and farm/safari animals, which come with plastic plants and rocks. They don't look so promising, but I didn't get to see them in person.
Last edited: Aug 8, 2022
Reactions: Sundown Dreamer, Tiny and Mr. M
T

Rather than glue the lids on, glue some small bits of cardboard or plastic sprue so the lid (upside down) sets on top without sliding off. That way you can remove it to move models inside. You don't need to model the inside in any great detail. Just paint - walls and floors a different color. Super quick and easy. No furniture required. Just a little color to make it look "finished" when you open the top. If you want to go a bit farther, mask off the top or bottom of the wall and paint a different color for an institutional two-tone wall look. If you're really nuts, cut out lots of squares of masking tape and lay out the floor in a checkerboard pattern, and paint a second color. Throw on a few posters and blood splatter. A chaos star painted in blood certainly tells a story...

Glue several together with walkways, stairs, supports, and even mount them on a big cardboard tube (some pipe that runs vertically through the dome - don't know what's in it; don't know where it's going...) for a shantytown stack.

May also mesh with the Ash Waste terrain if you mount it on stilts.
Reactions: Ben_S

In another episode of "I'm not stealing my kids toys honest" - this garage and tanker are available from Tesco in the UK. The garage is a pretty good 40k scale. Taurox parked on it to demonstrate, you'd get two Chimaeras or Leman Russes without sponsons in as well. The garage door on the left slides open.

I thought it would be a good enforcer vehicle pool.

The tanker is just about the right scale but comes seperately. 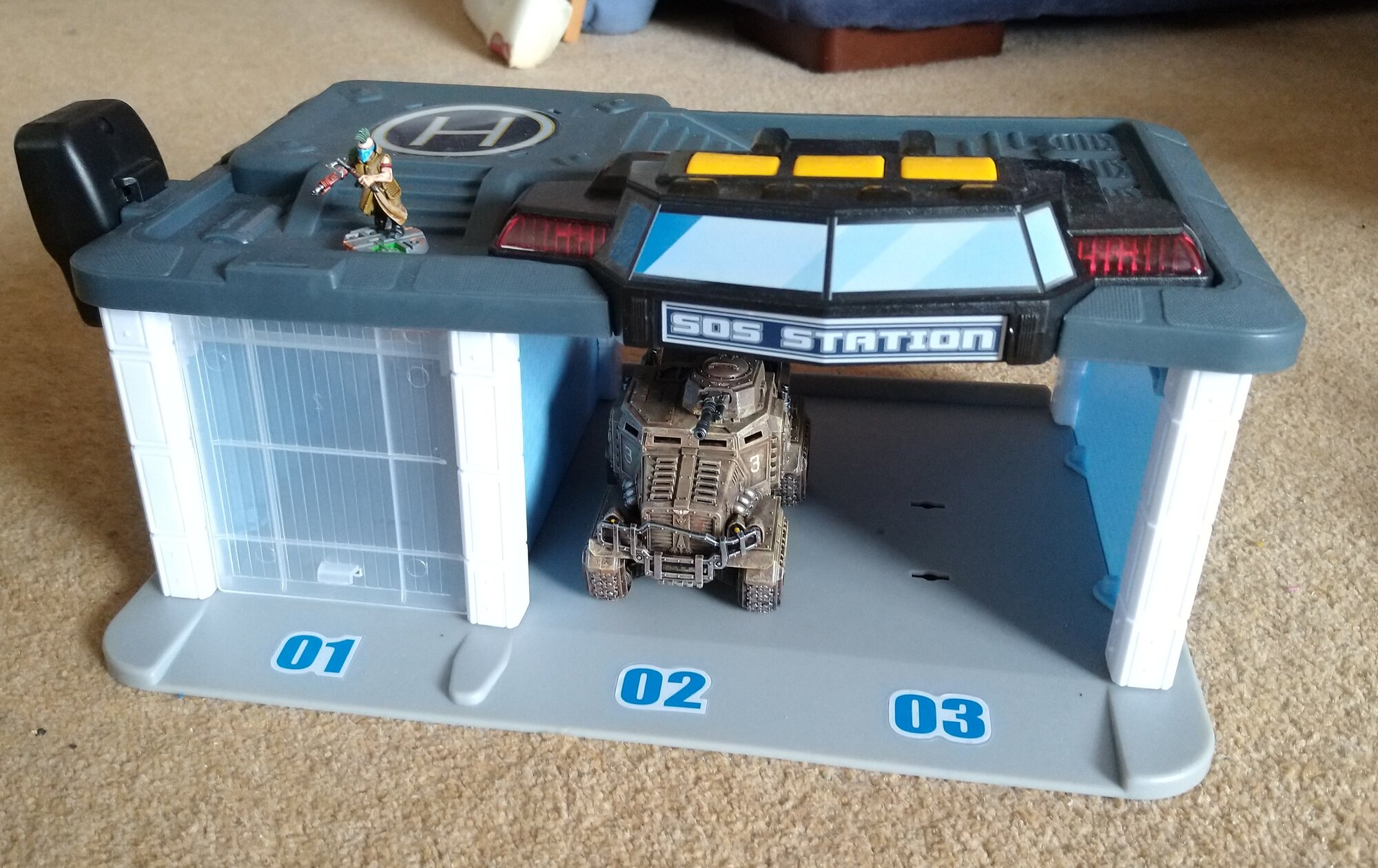 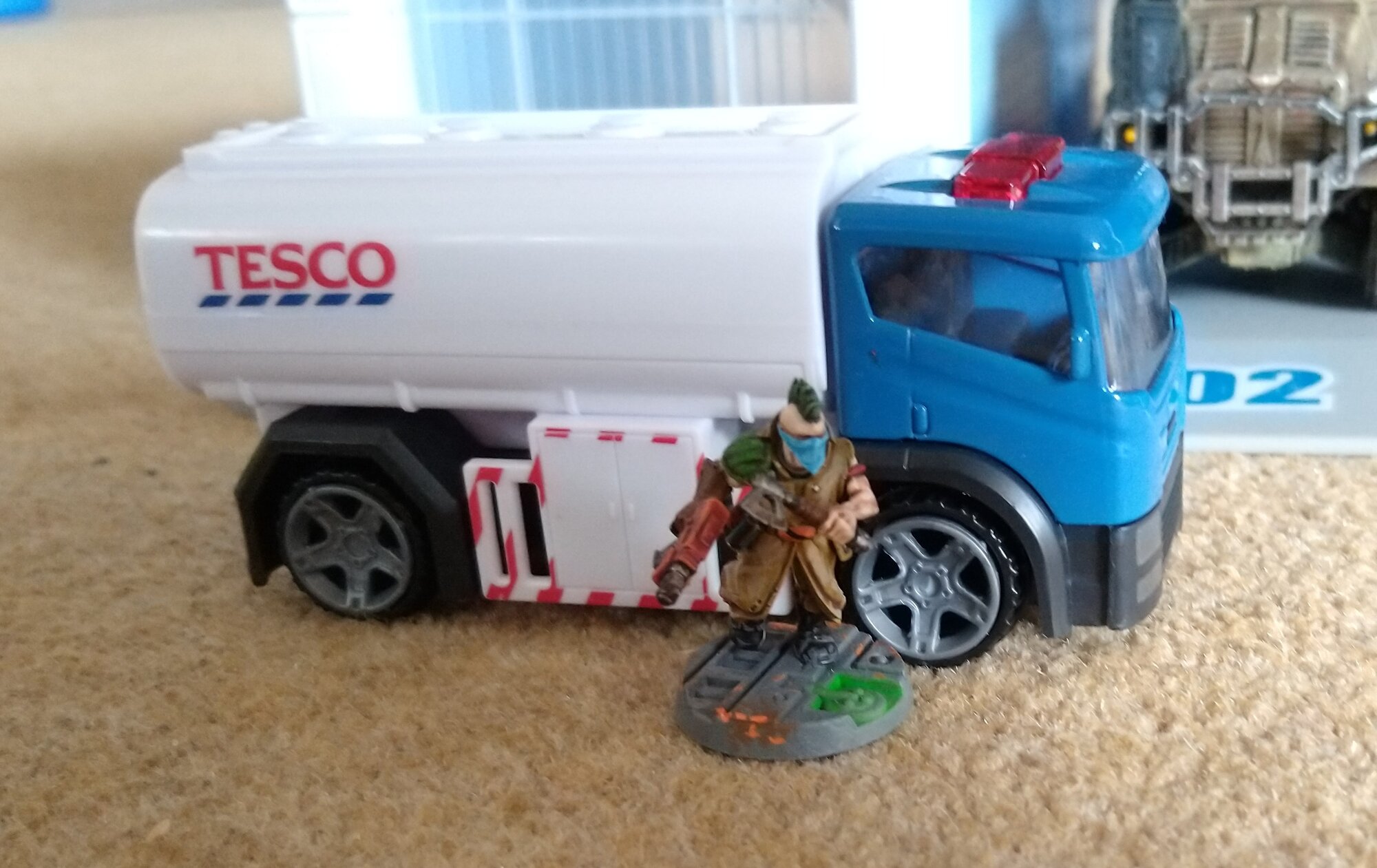 What is “Tesco’s”? All I know about them is they sell water pistols (“just don’t tell them we got them at Tesco’s” -Mike)
B

It's a big supermarket chain - like Walmart (I think, though I'm no expert on US stores).

I had a quick look and couldn't see these from Tesco online, though Smyths have something similar, if not the same:

For those in the US, you're probably better off with dollar store items:

The Smyth's one is very similar, but way overpriced - the Tesco one was £12 and came with three vehicles as well (they're slightly too large scale for our purposes).
Reactions: Ben_S

Not if you turn them into wreckage!
Reactions: spafe, Stoof, almic85 and 2 others
Show hidden low quality content
You must log in or register to reply here.