September "One of Our Ladz is Missin"

"One of Our Skavz iz Missin". Never leave a Skav behind! The SkimmaSkavz (me) went in to get one of our Ladz back from the mighty, TRUKKOSAURUS! The mob that which must always be spelled all-caps.

Da Fort in all it's glory. Mobosaurus captured one of my Boyz last game and we iz gonna getz im back! 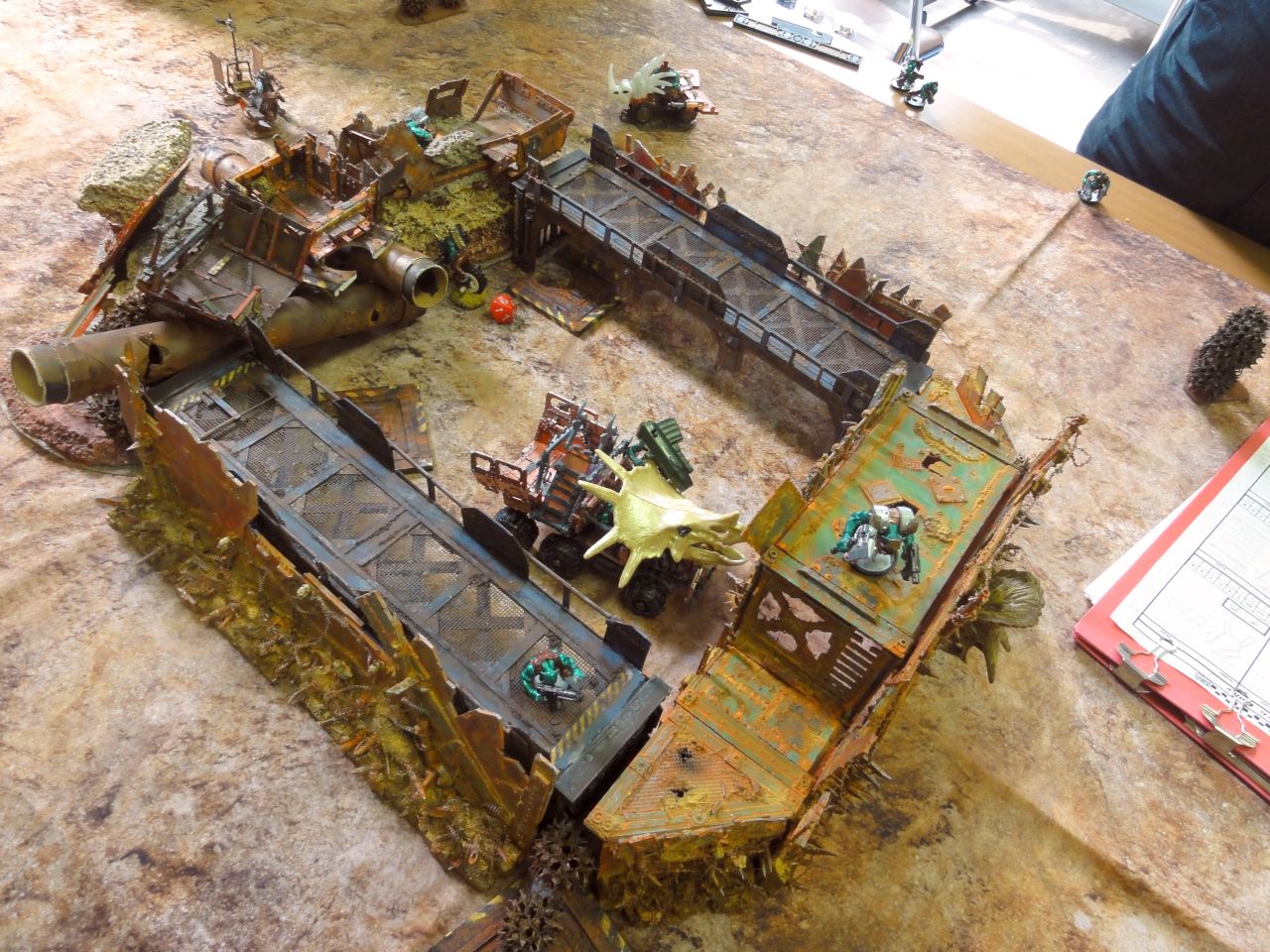 Clankity, clankity, clank, da gate comes down and TRUKKOSAURUS roars out into the sands to meet the Skimmaskavz face on! 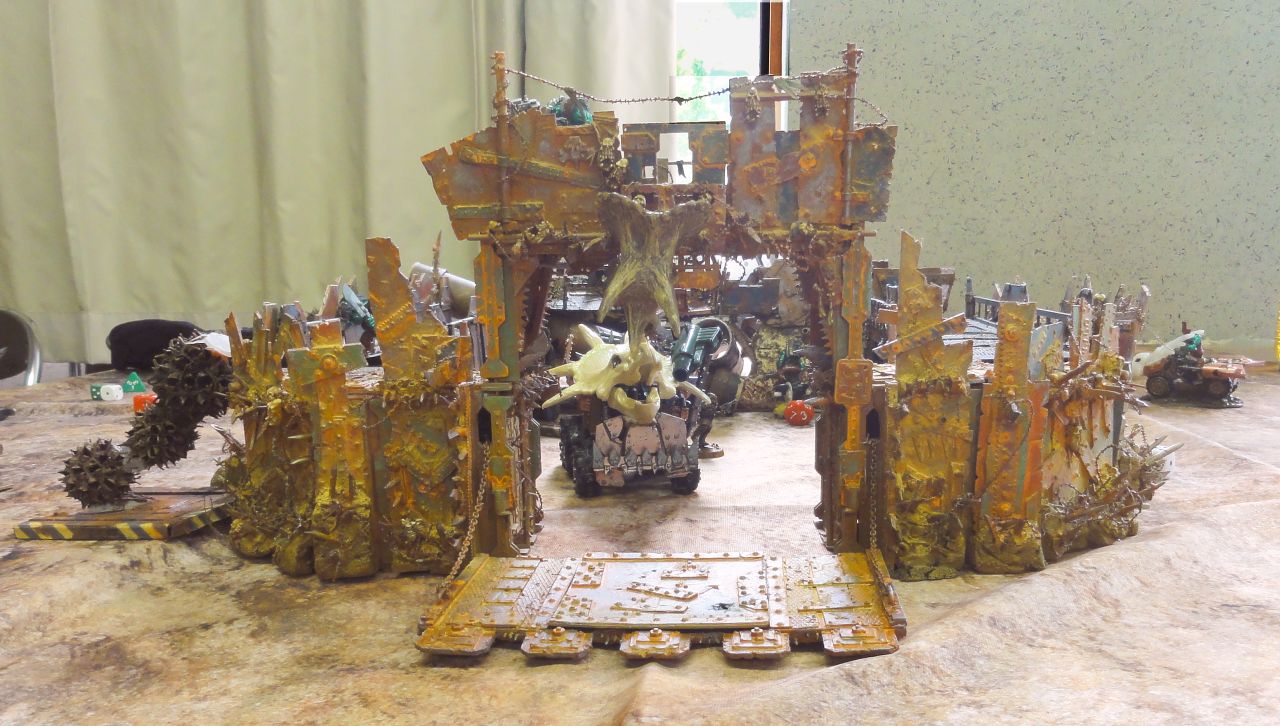 Da Skavs reinforcments show up, swooping in from the surrounding desert. 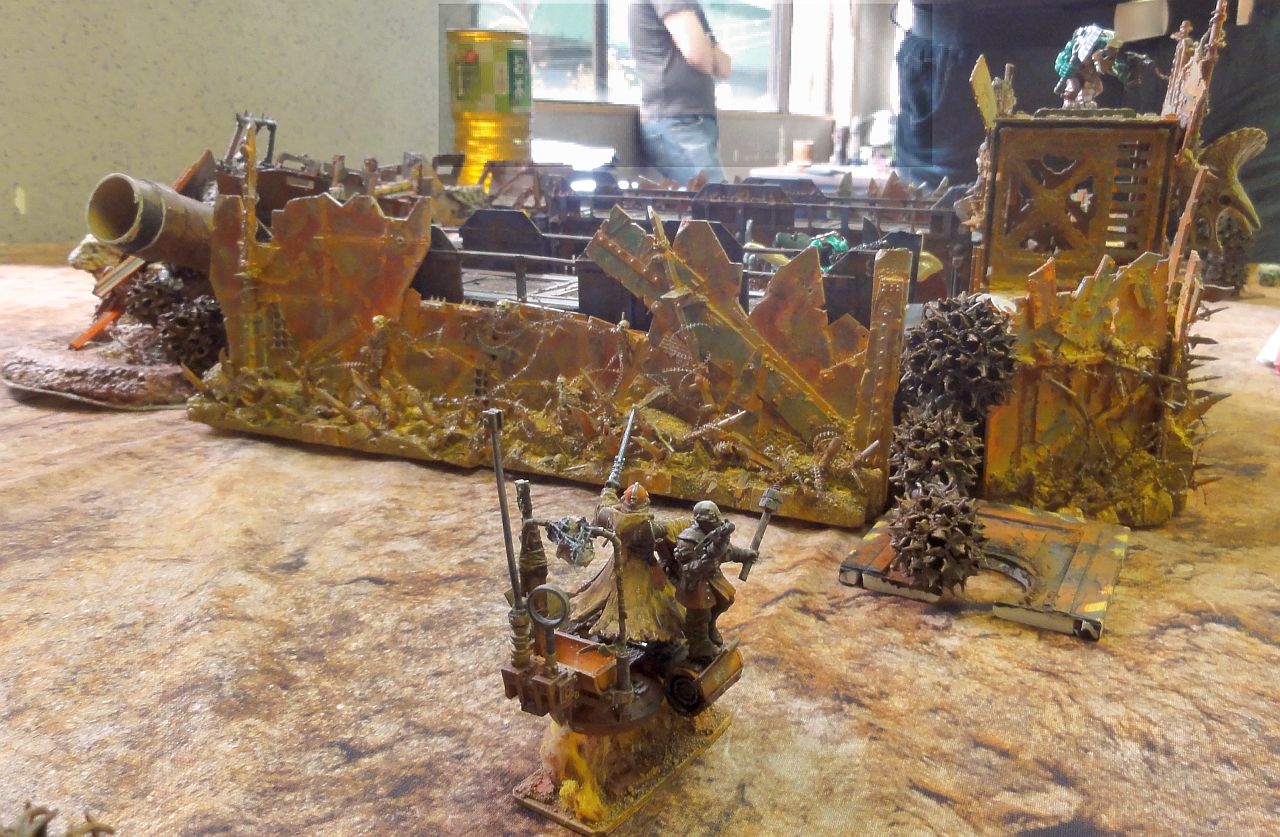 Bikes dog-fight in front of the gate until the scene is lost in plumes of dust. 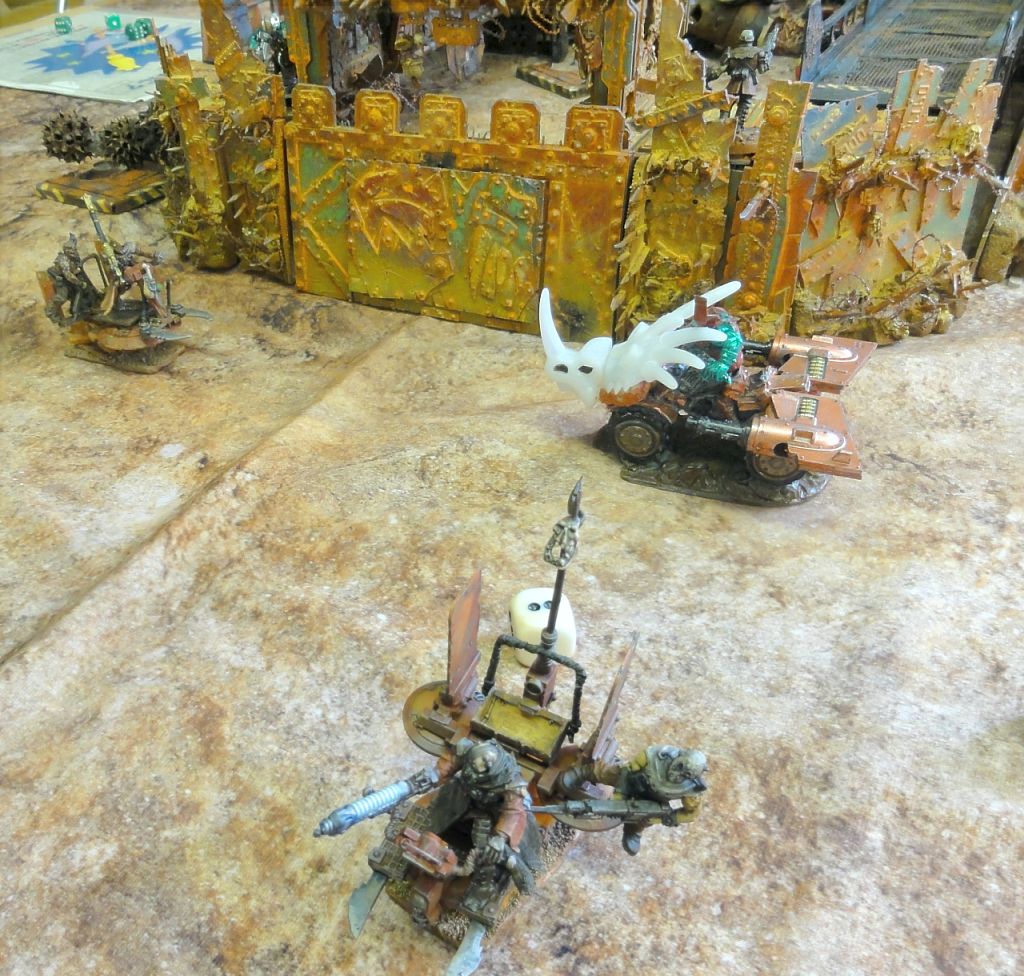 BIKE-OSAURUS! rams headfirst into a Skav skimma-bike (oops, I got a bit too close.....). The fragile craft is smashed into the sand, but while BIKE-OSAURUS! is relatively undamaged, it too is immobilized. The ensuing melee over the wreckage results in a pair of dazed yet living Skavs pulling themselves from the smoking wrecks. 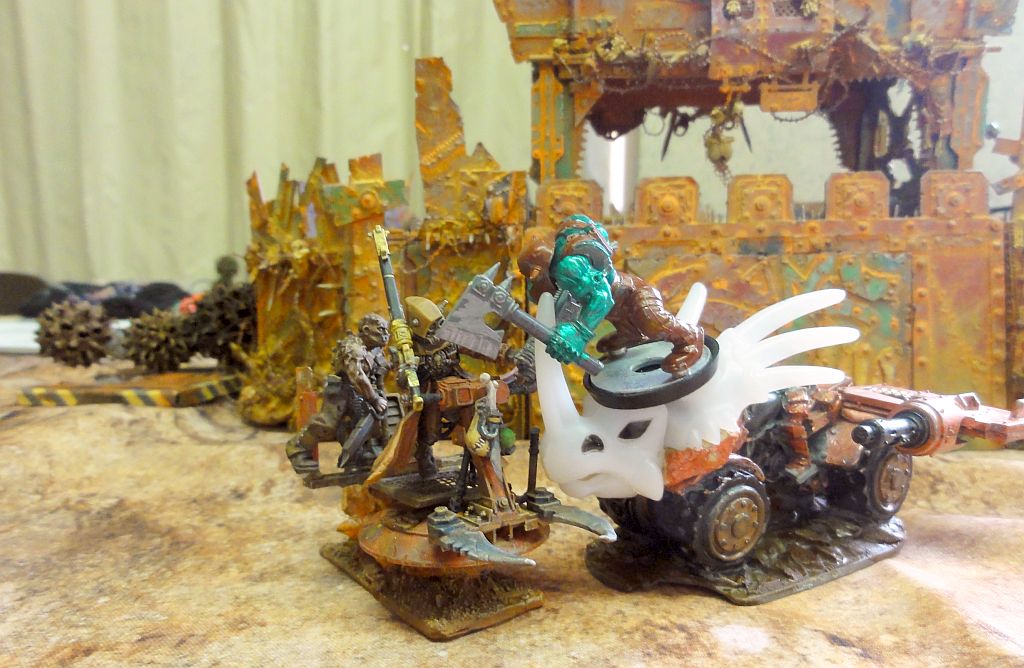 TRUKKOSAURUS goes in to crush another skimmabike. In Gorkamorka head on rams are resolved be secretly deciding which direction your vehicle will swerve. If both sides swerve the same way, crash! He figures I'm figuring to pull my bike left, I figure he figures I'll figure I ought to pull left, so I just go straight in as he swerves to the left. Never try to out-kunnin' a Skimmaskav! Slippery devils every one of 'em! 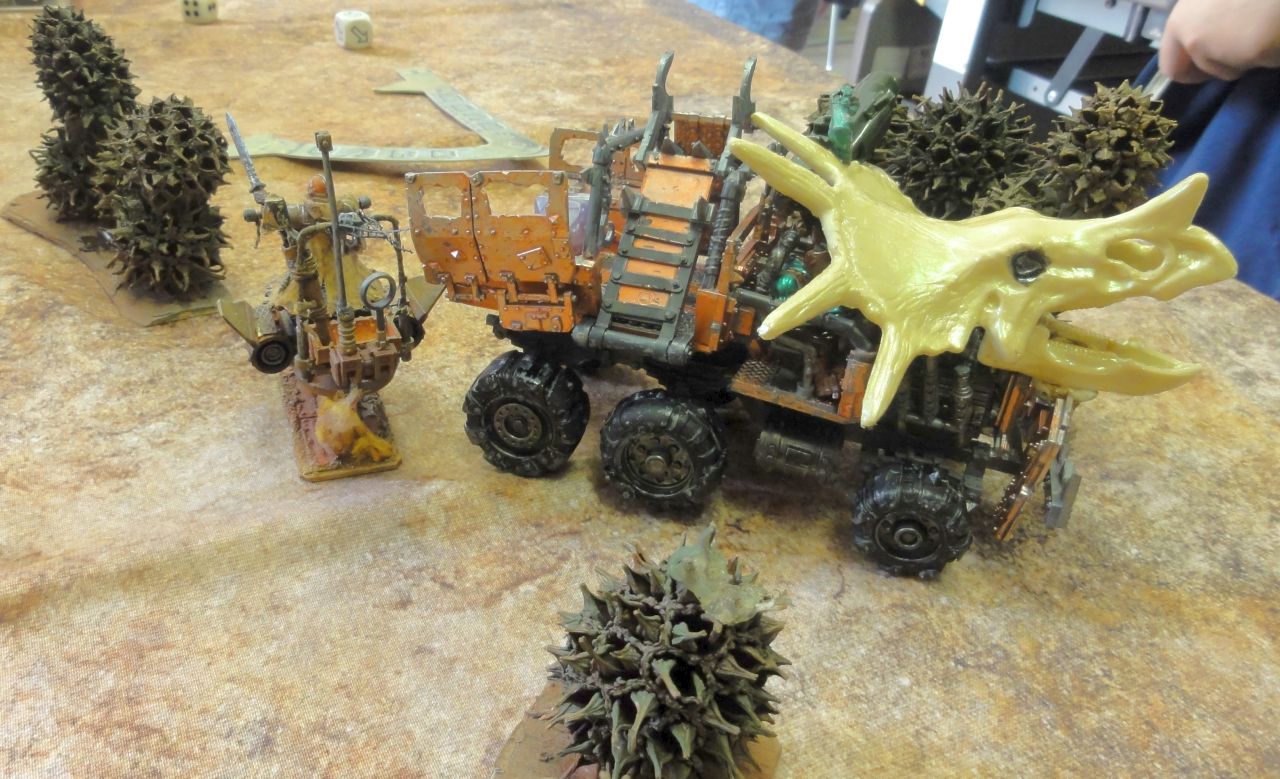 He has held the fort, and I don't have the forces to overcome his defenders still within. Both sides are totally hammered and have been making Bottle (morale) tests and at last TRUKKOSAURUS sadly fails one and runs away, abandoning Fortosaurus to the maurading Skavs. Really close game and could have gone either way.
Then in the post game TRUKKOSAURUS had 3 of his Boyz die on him. He rolled five "1"s in a row. 11, 11, 14, dead, dead, dead. He has a bunch of teef saved up, so he can re-build but by Gork (or possibly Mork) it was brutal!
Reactions: BearsWillEatYou, daveh, Stoof and 2 others
Show hidden low quality content
You must log in or register to reply here.

Bug Bug in the Ash Wastes Nomads Manager... and not the ones they ride of course...

Yak Mechanicum Wednesday at 7:18 AM
Kavnx

GorkaMorka Jun 17, 2022
Skarboy
S
J
N18 How do you rate my cousins planned Delaque for A Aranthan Succession Campaign?