Ben_S said:
Sounds like those Delaques managed to sneak dud ammo into the Eschers' supplies.
Click to expand...

wasn’t that an event card in the original version? “bad batch of ammo” or something

Punktaku said:
wasn’t that an event card in the original version? “bad batch of ammo” or something
Click to expand...

Evidently there was. Found them in the vault.

"Bad Ammo
This card can be used after an enemy fighter makes a ranged attack. After the shot has been resolved the fighter must take an ammo test. If he passes the test, hand this card to your opponent."

We would have to have had around three of them floating about in the game to generate the number of weird things that happened.

That looks like a great day's gaming. Unfortunate that it happens so infrequently, good luck changing it, but those cinematic moments like Woo's big gun down, or hilarious ones like EVERYONE MISSING EVERYTHING, are what the game's all about, and linger in the mind.

Lovely table, and thanks for the batreps. Also good to see Escher on top, where they belong.
Reactions: Rusty101 and timdp

Had our annual January Necromuda battle day this past Saturday. Unfortunately for the gaming front there was far more arriving late, socializing and drinking than gaming... On the social front we had a Juicy Juve Secret Santa where we each had painted up a Juve for another randomly selected gamer in the group. Giftee gangs were known so we knew which gangs we needed to make a Juve for. I needed to make one for Ryder's Cawdors, Redemptionists or Scavvies and Trevor needed to make one for my Eschers or Orlocks. There was some initial confusion as there are two Tims, I ended up opening the one marked Tim instead of the correct package marked Tim D. This package had a wonderfully painted cross dressing dude dressed as an Escher, but it was not to be... I also manged to not get the sim card into my camera so all the pics are phone pics

The Escher I received and the Cawdor I painted. The Escher is going to need some more weapons... 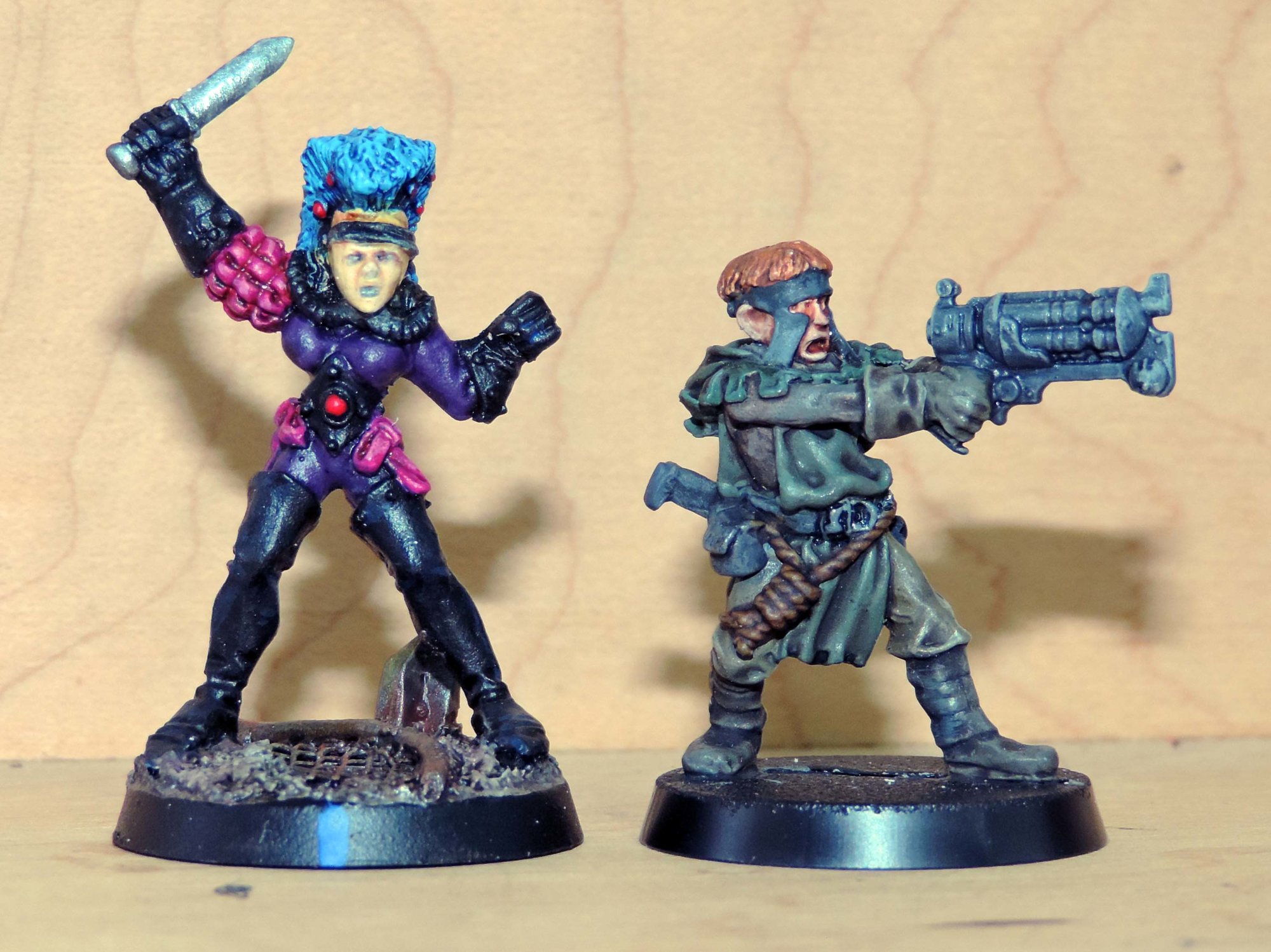 Here are all of the figs: 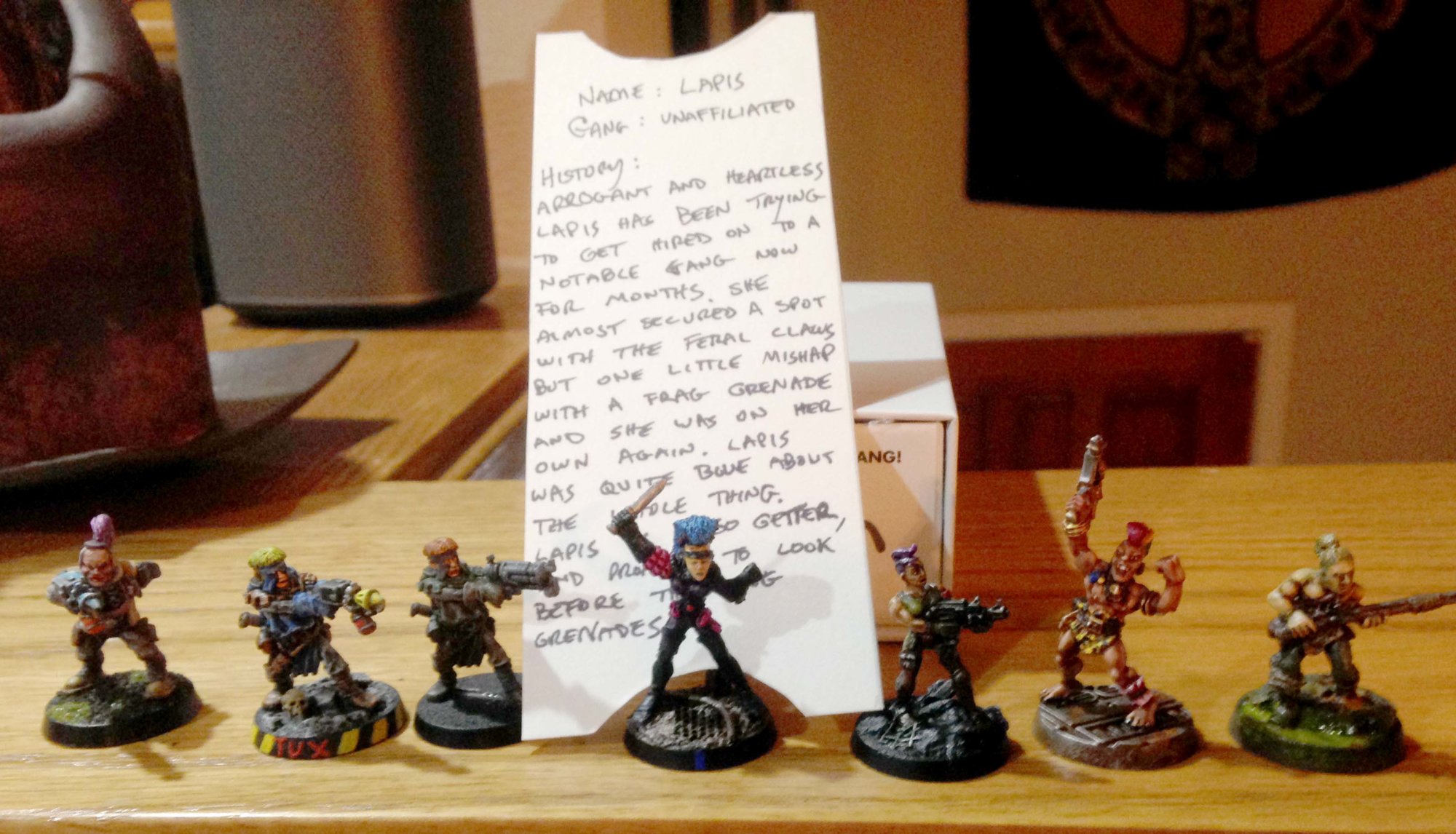 On the gaming front I got in one game with my Eschers (3300) against Tyler's Cawdor (1800). He picked the Ambush scenario which led to a complex deployment: I placed three in the center of the table and then he set up his gang 12" away from my gangers in cover and hiding. I then placed one group within 4" of my original placed figures and and another group "anywhere" eight inches away from his figs and then my Infiltrator. At the end of my fist turn I placed my three "vents" gangers.

Ambusher gets first turn so he fired away from two sides, knocking a brand new Juve off the upper level to take her out of action (and eventually be captured and sold to slavers for a grand total of five credits!) and another Juve down. Grenade launcher pinned my heavy and best HTH fighter.

In my first turn a sprinter climbed up a level and charged the grenade launcher guy and took him down and out of action and consolidated to a nearby Juve. My leader did the same and charged his leader, needing a 4+ on the Leap roll to get into HTH. Rolled a two, so she is left standing in the open... My very limited return fire did thankfully take his heavy stubber guy and one more ganger down.

His second turn fire somehow only managed to pin my leader (leader and one more ganger shooting at point blank range at a target in the open).

My second round fire took down two more of his gangers and the close combat phase took three more out of action. He then bottled.

He ended up with seven gangers out of action resulting the death of two Juves and various injuries.

These pics were taken after movement but before shooting during my turn two. Pics start on my left flank and move to the right: 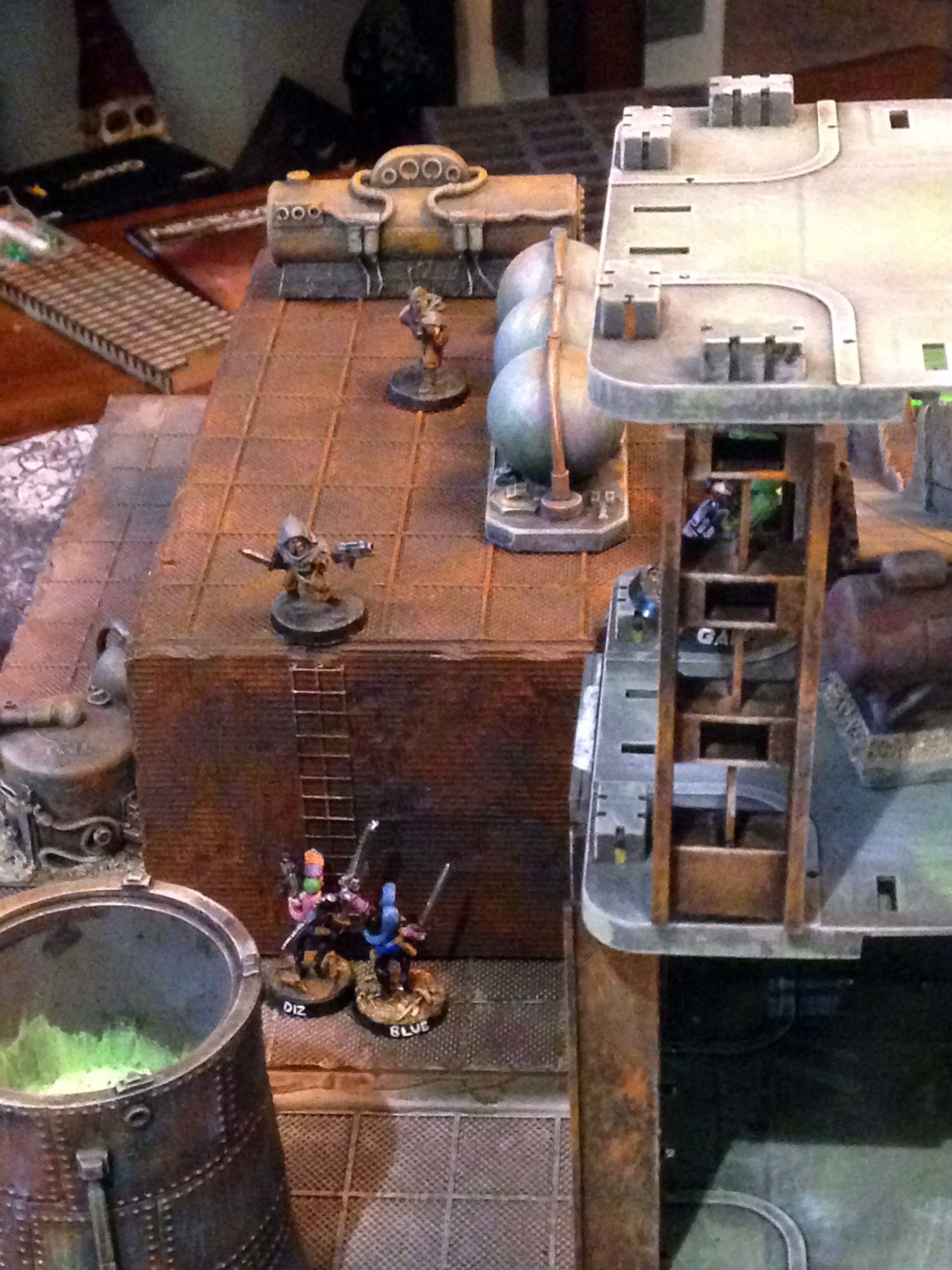 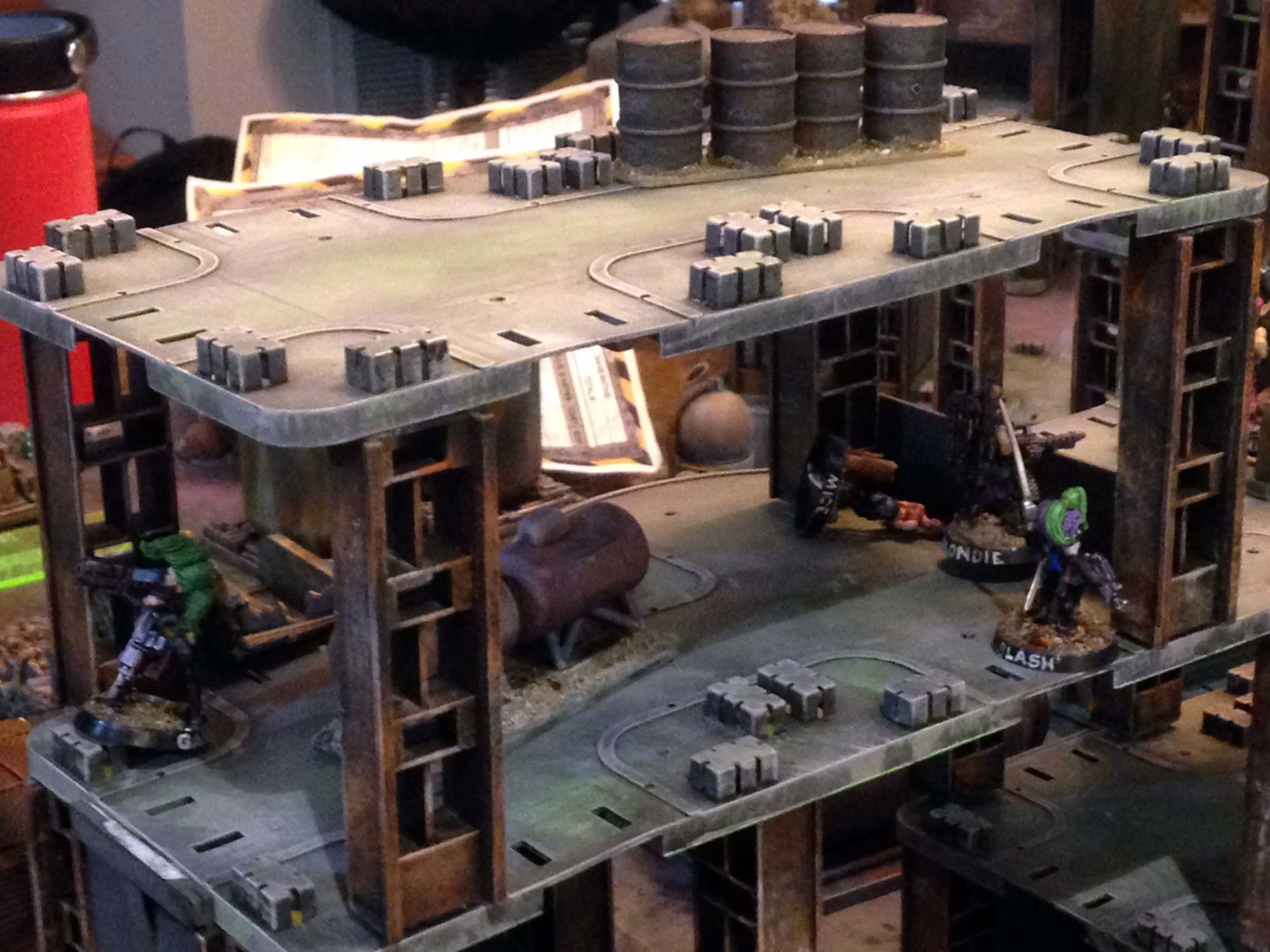 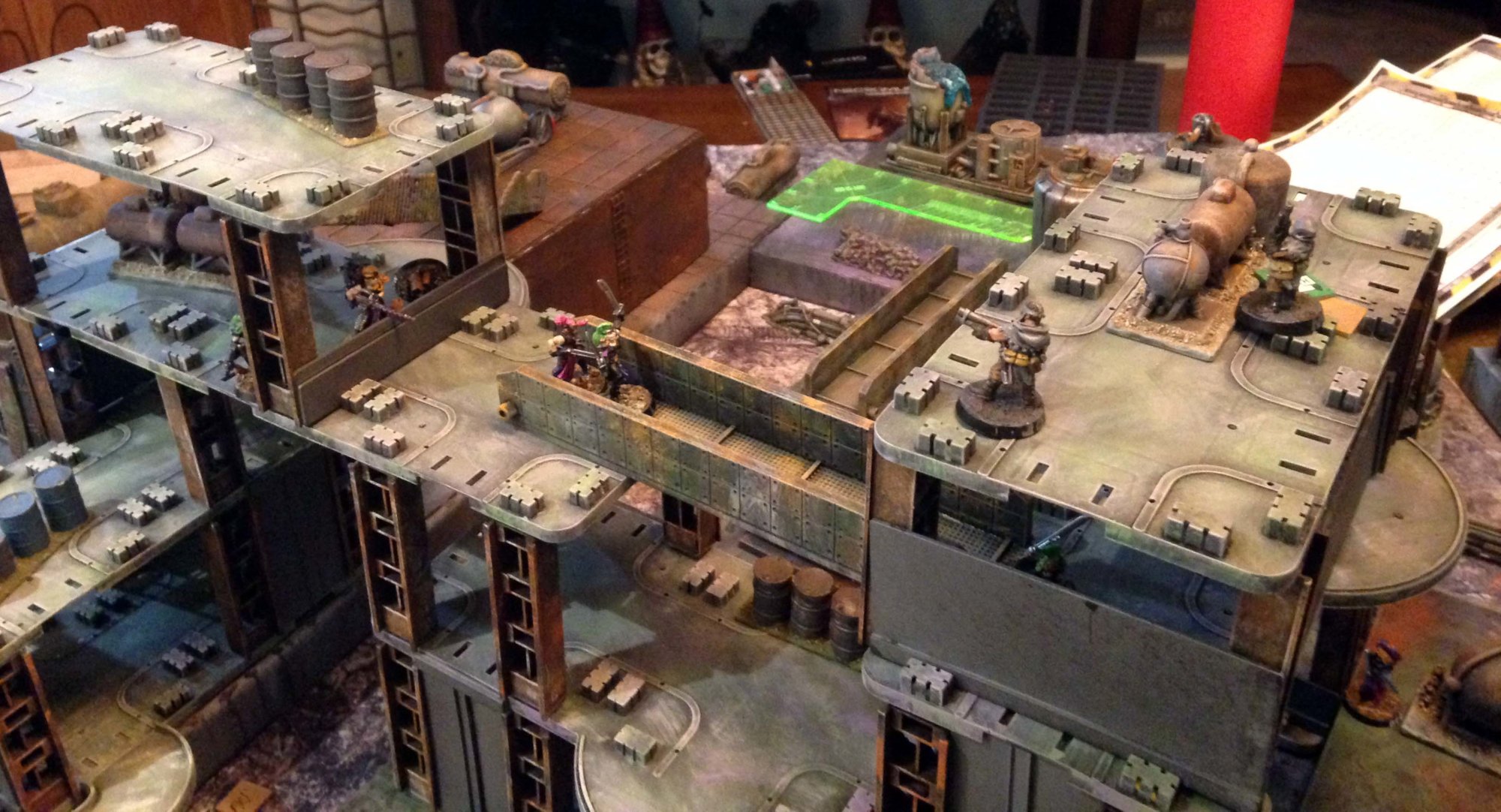 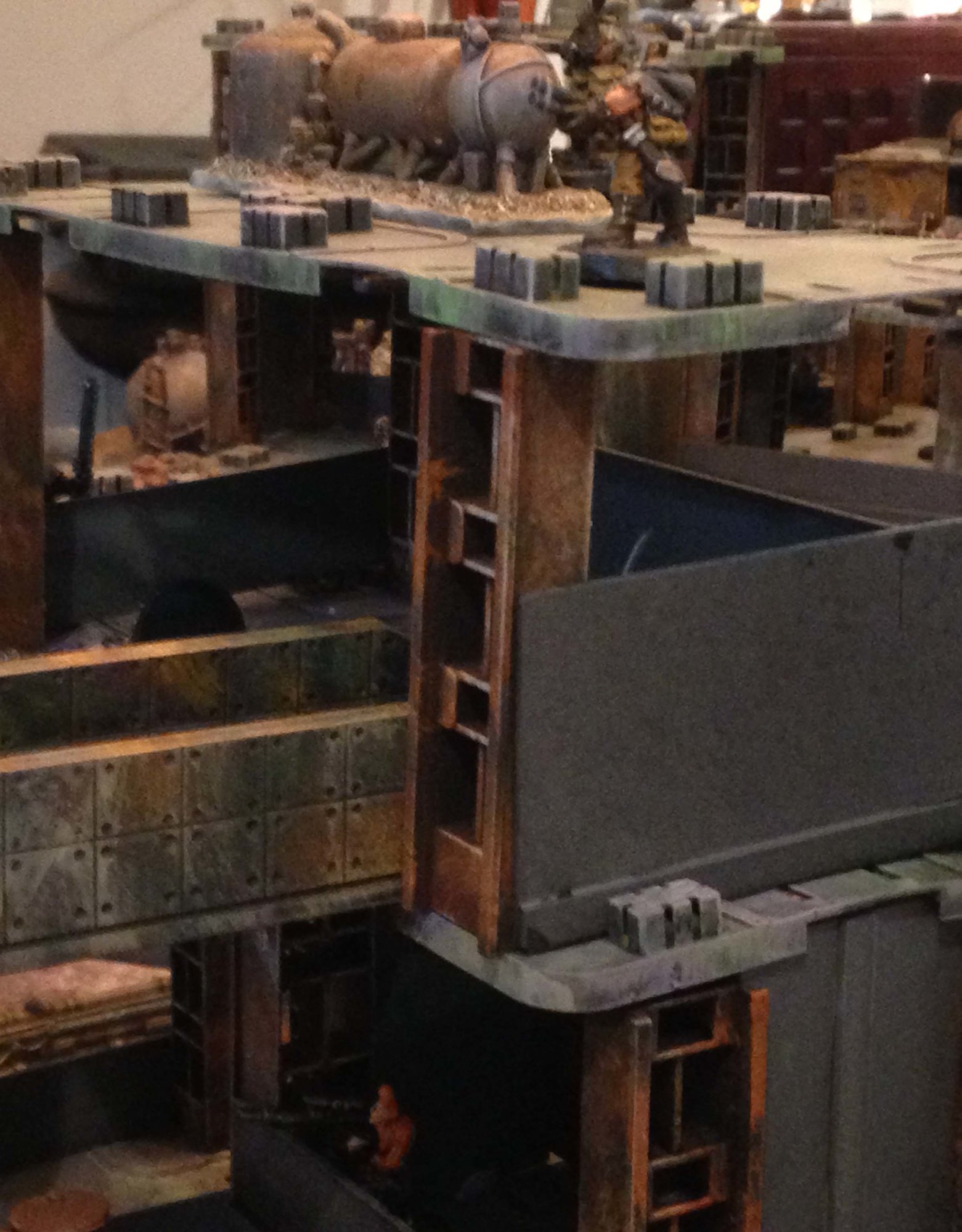 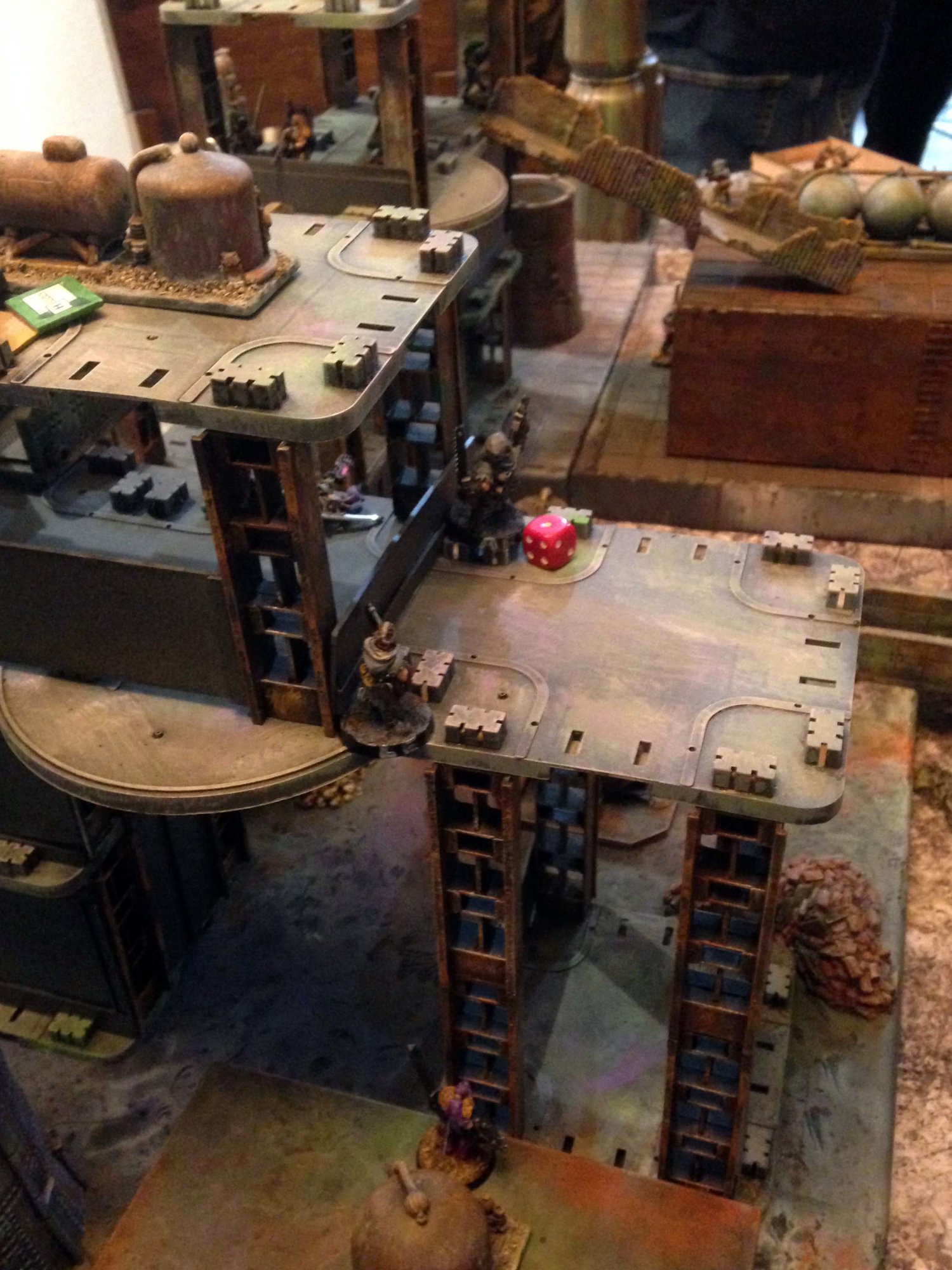 Clark later ran a short three game campaign for all the new Juve figures. Each player had 50 creds to buy a Juve. Set mine up with autopistol and sword.
Scenarios centered around the events at an Underhive fair. Juves have no cash so need to sneak into the fair. They found a hole in the fence but need to cross four feet of mostly open ground with limited cover without being seen by a watchtower with a 90 degree arc of vision in the middle of the board. Movement was by playing card based initiative and the last one to move could rotate the tower for the next turn. Anyone spotted by the tower had to move four inches backwards. Both running and Hiding were also possible. Since the gangers were moving on both sides of the tower it was critical fro each side to get the last movement and be able to face the tower towards the other side of the table so that gangers on their side of the table could advance. We did mostly make it across and the first Juve to the fence hole got the pick a Stealth skill. Everyone also got D6 exp. My Juve got two.

Now that we were inside the fair, the next scenario was at a shooting gallery, shooting at giant Necromundan rats as they charged at you (actually moved only one inch per turn). Whoever killed the most rats got to select a Shooting skill and everyone got D6 exp. Got five this time.

Next game was a HTH test. We set up set up in initiative order and had to set up in base to base with one of the already placed Juves. Then HTH commenced starting with the first placed Juve, who had Juves on either side of him and went down and out. This continued until one Juve was left standing. My Juve's sword helped her until I rolled a one and a two in the combat to my opponent's four (and he had charged). I forced a reroll in hopes of him possibly rolling a bit lower, but it was not to be as he rolled a six, so down and out I went. Winner got a skill and everyone got D6 exp. Six this time!

We then rolled exp based advances (two for my Juve: Leap and +1 Init.)

The big Arbitrator surprise was that this Juve now joins your gang, with gear, advances and exp intact.


These are just random pics of the boards after the two games. Ran quite a bit less scatter than on previous boards and they seemed to work well. 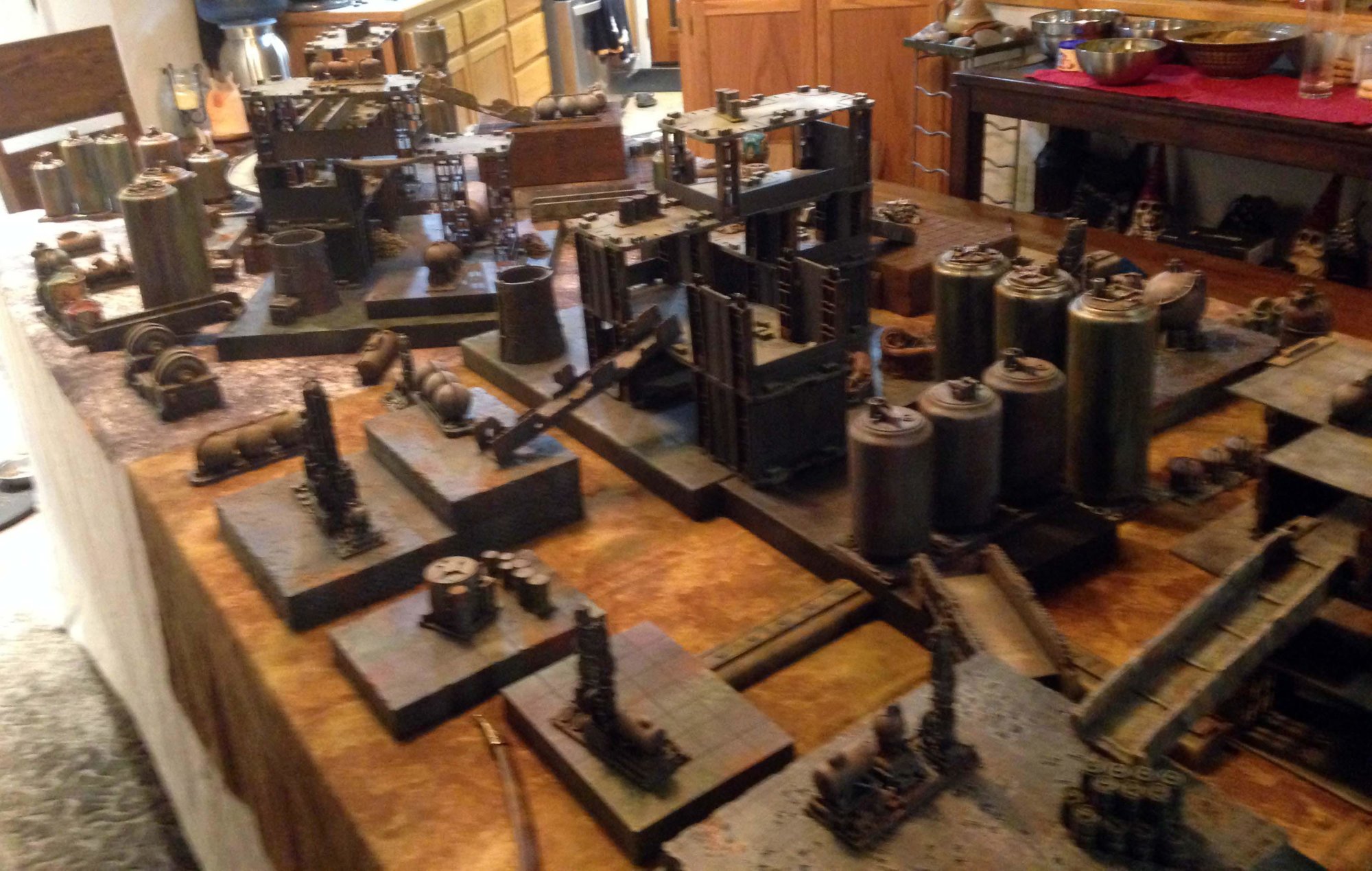 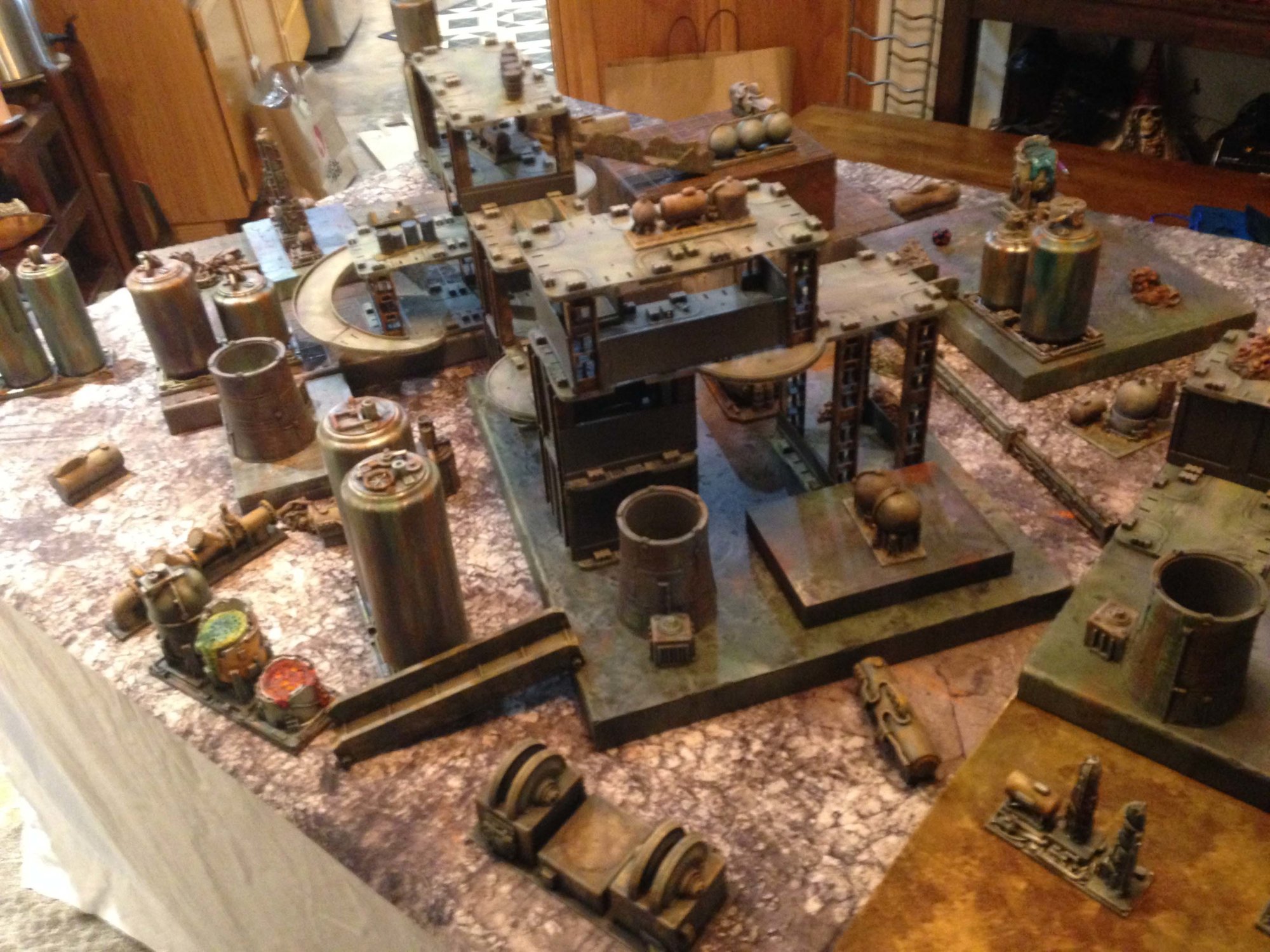 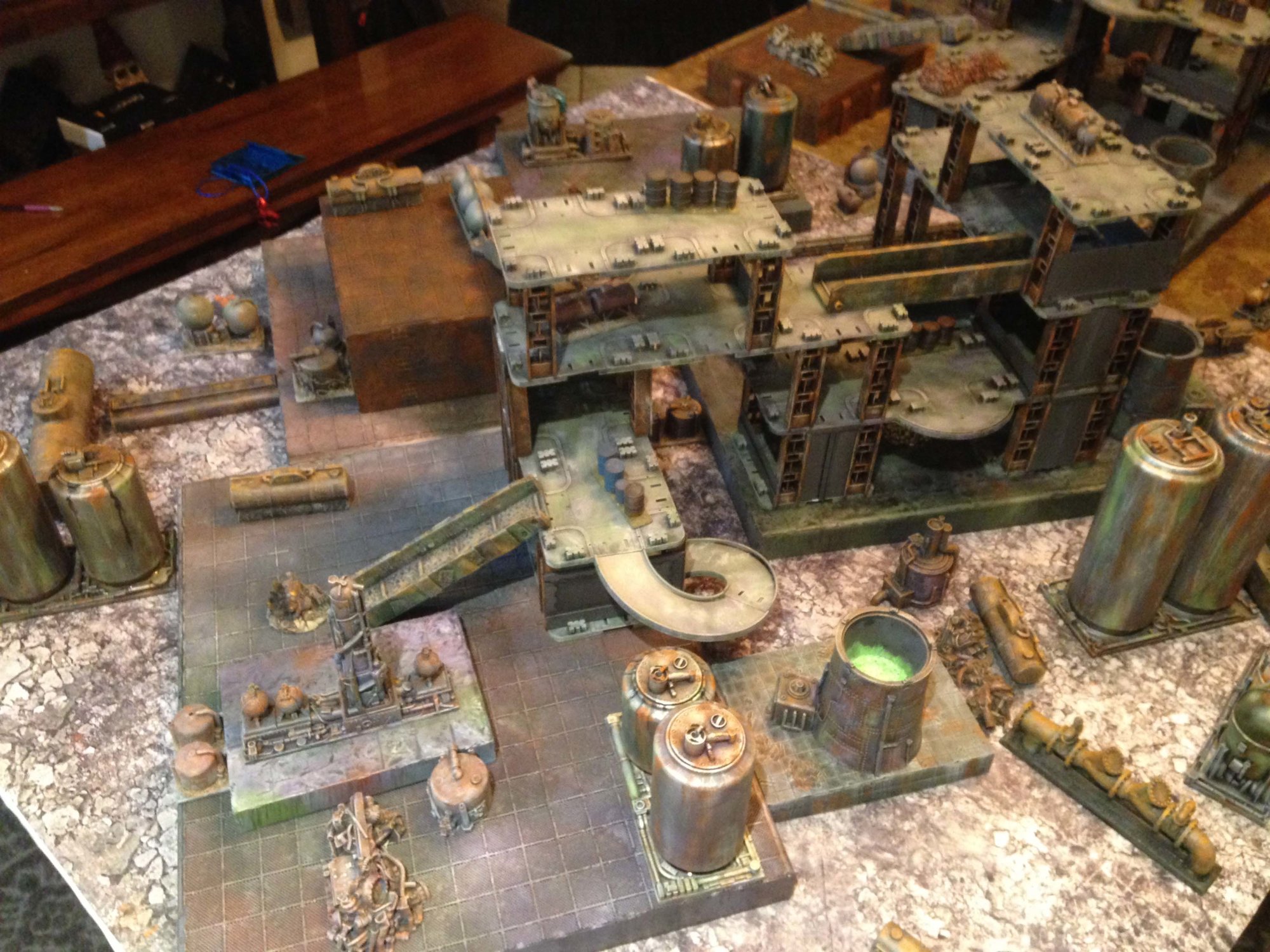 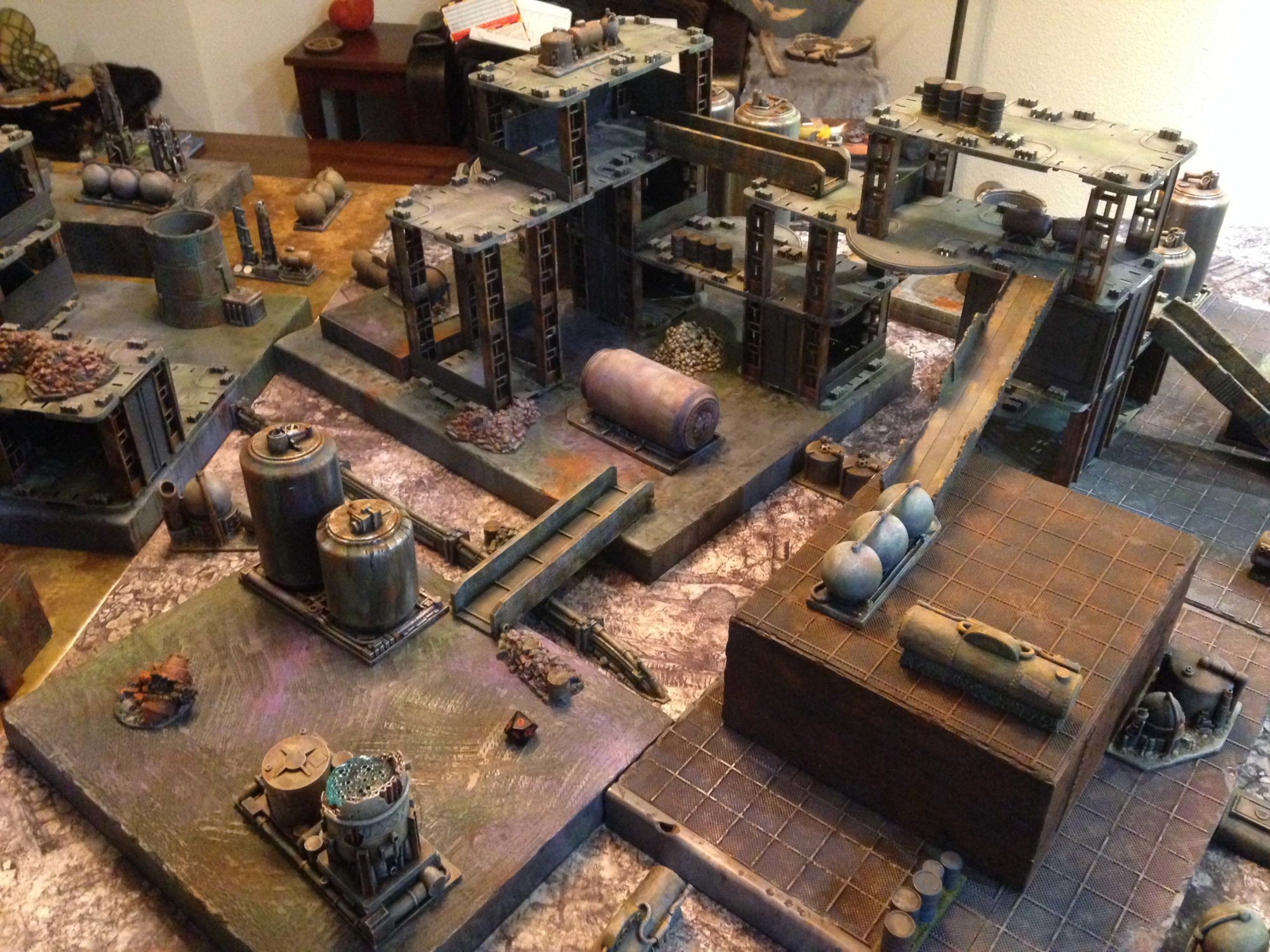 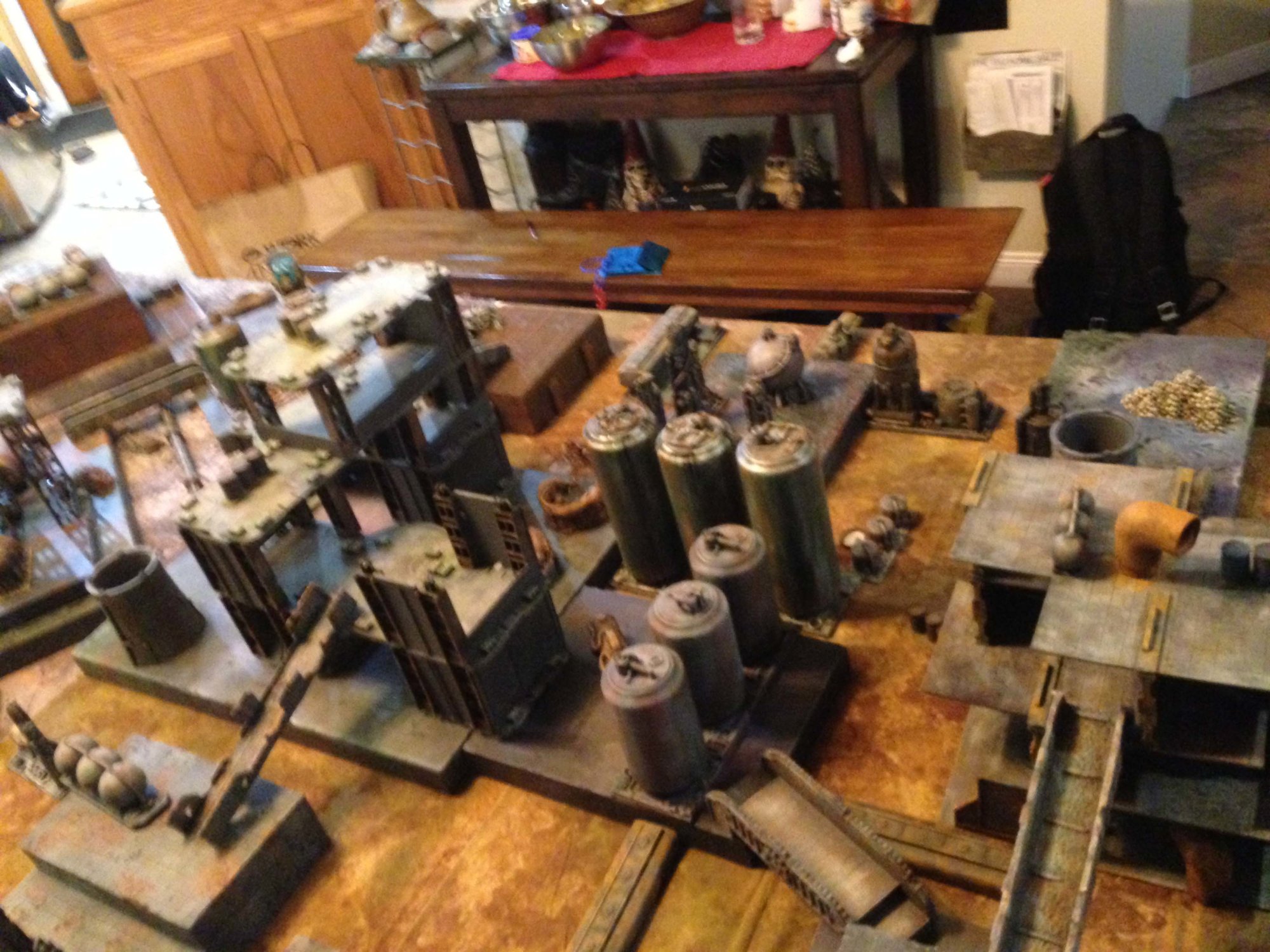 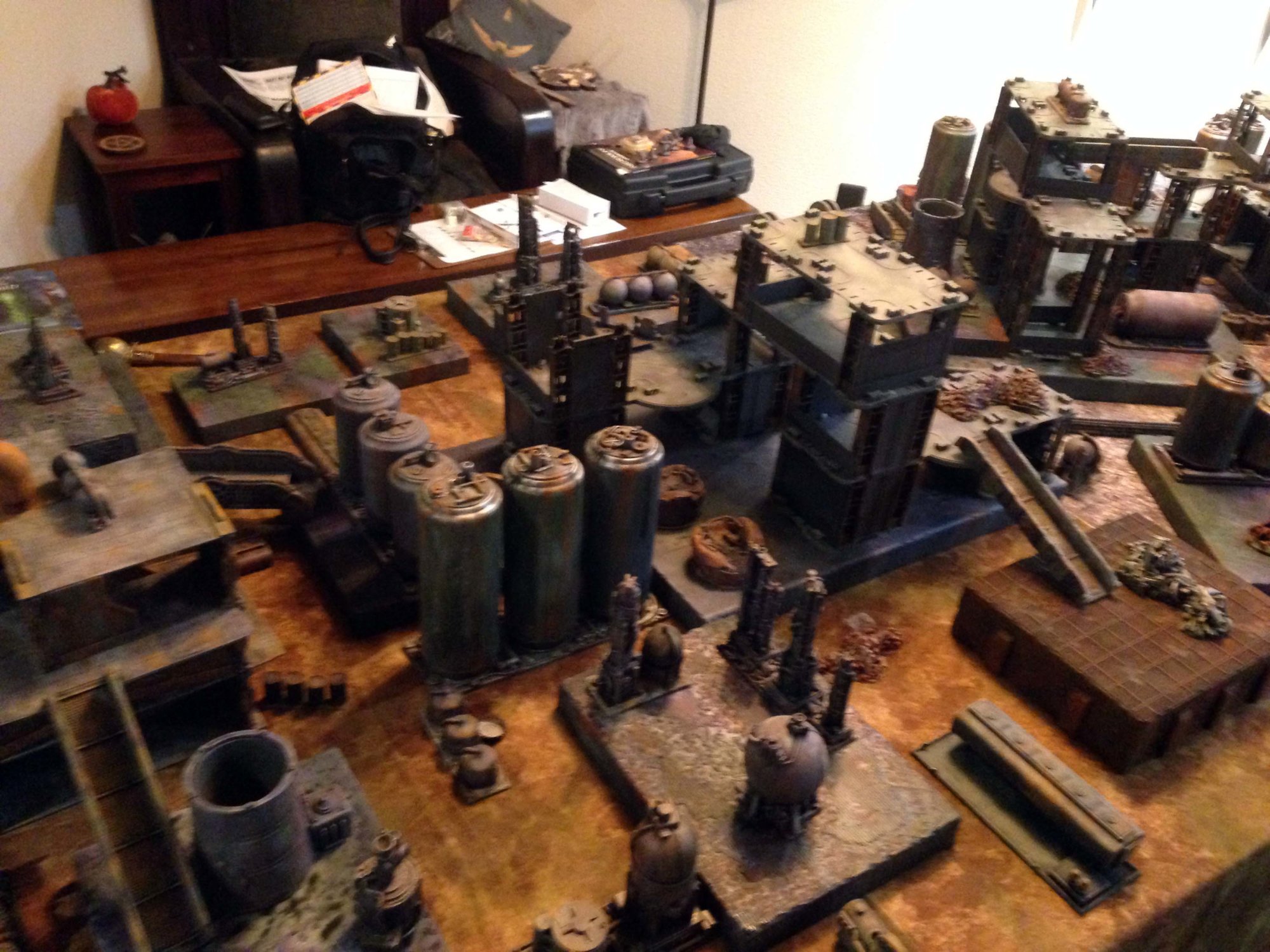 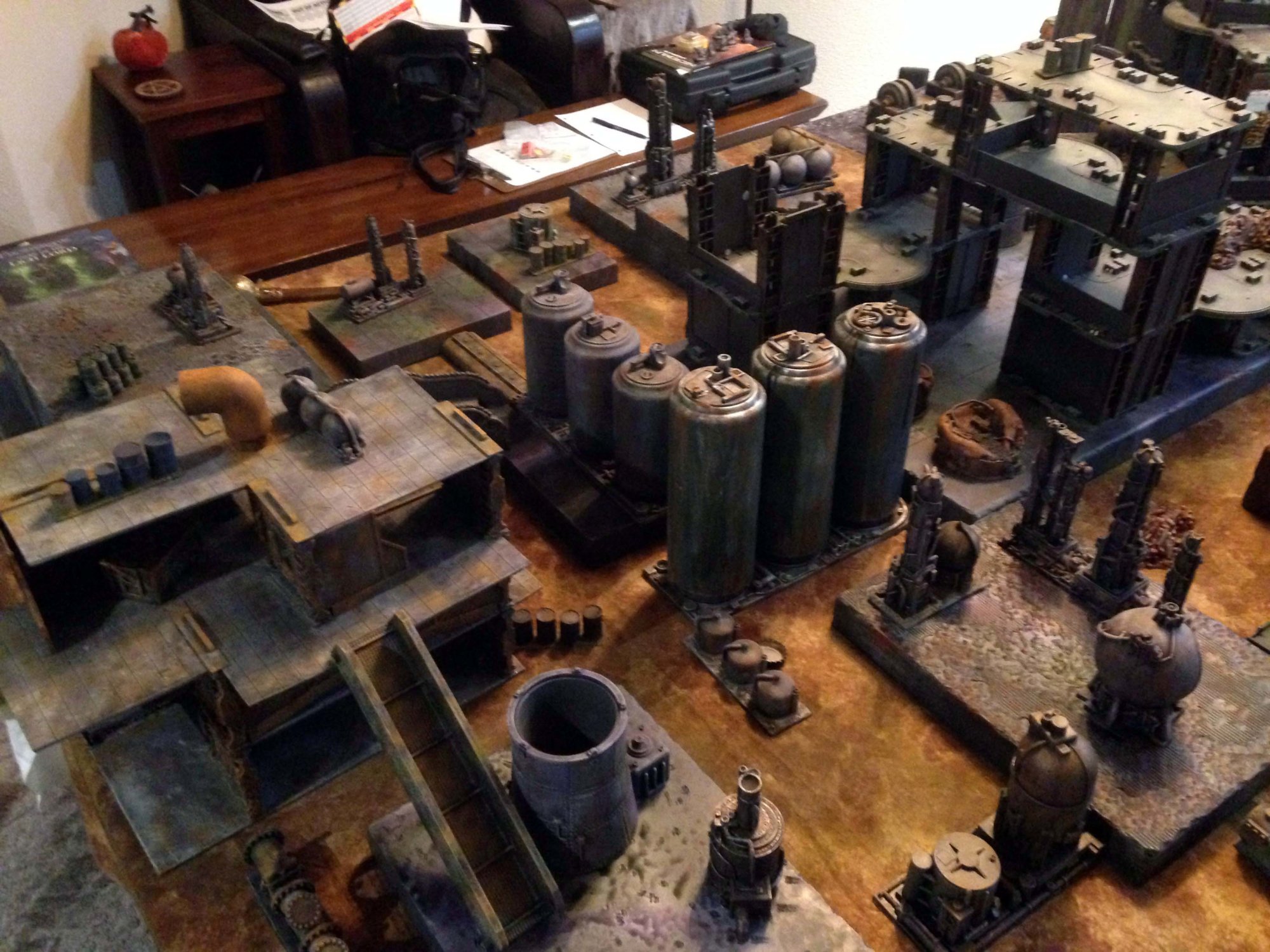 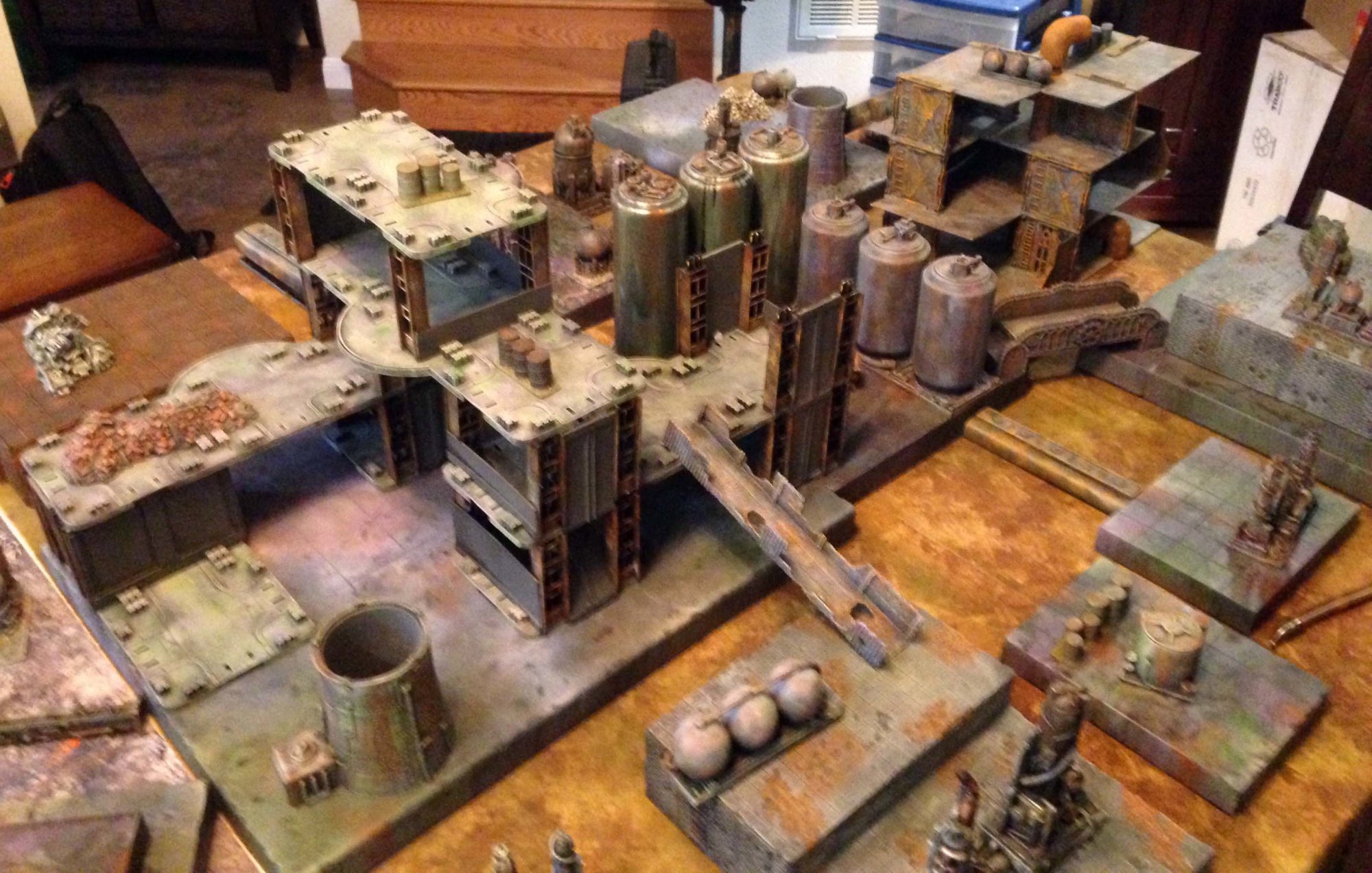 My my my, that is some lovely terrain!
Reactions: prewarsalad and timdp

More work on the Necro box terrain. Still needs something though...

The occasional spot of colour would do them wonders methinks. Stick some print-out posters and hazard stripes on them:

I agree with @undertaker. A touch of spot color, like a red or green light/switch.
Reactions: timdp and undertaker

Same, those doors and bulkheads are perfect! All they need now is a little character.
Reactions: timdp and undertaker

I dunno, I kind of like em as they are.
Reactions: Ben_S, timdp and Punktaku
B

I agree with @Kitcar - some spots of colour wouldn't hurt, but I quite like my terrain to be fairly plain, so that it fades into the background rather than overshadowing the models.
Reactions: CaptainDangerous

Group painting day! Much paint was flung and beers were consumed. Had seven painters dropping by during the day on somewhat overlapping shifts. My friend's Necromunda terrain for running con games need updating. Much of it was primed and/or base coated but needed washes, highlights and more color in general. There was just one tub of terrain, but there was a LOT of stuff in it!

With the exceptions of the barricades, containers, building corners and Alan's scratch built dome, everything is Armorcast resin. No gray, white or black paint was used! All color all the time. New nickname for the paint style of the brighter pieces is "Pretty 'n Gritty". 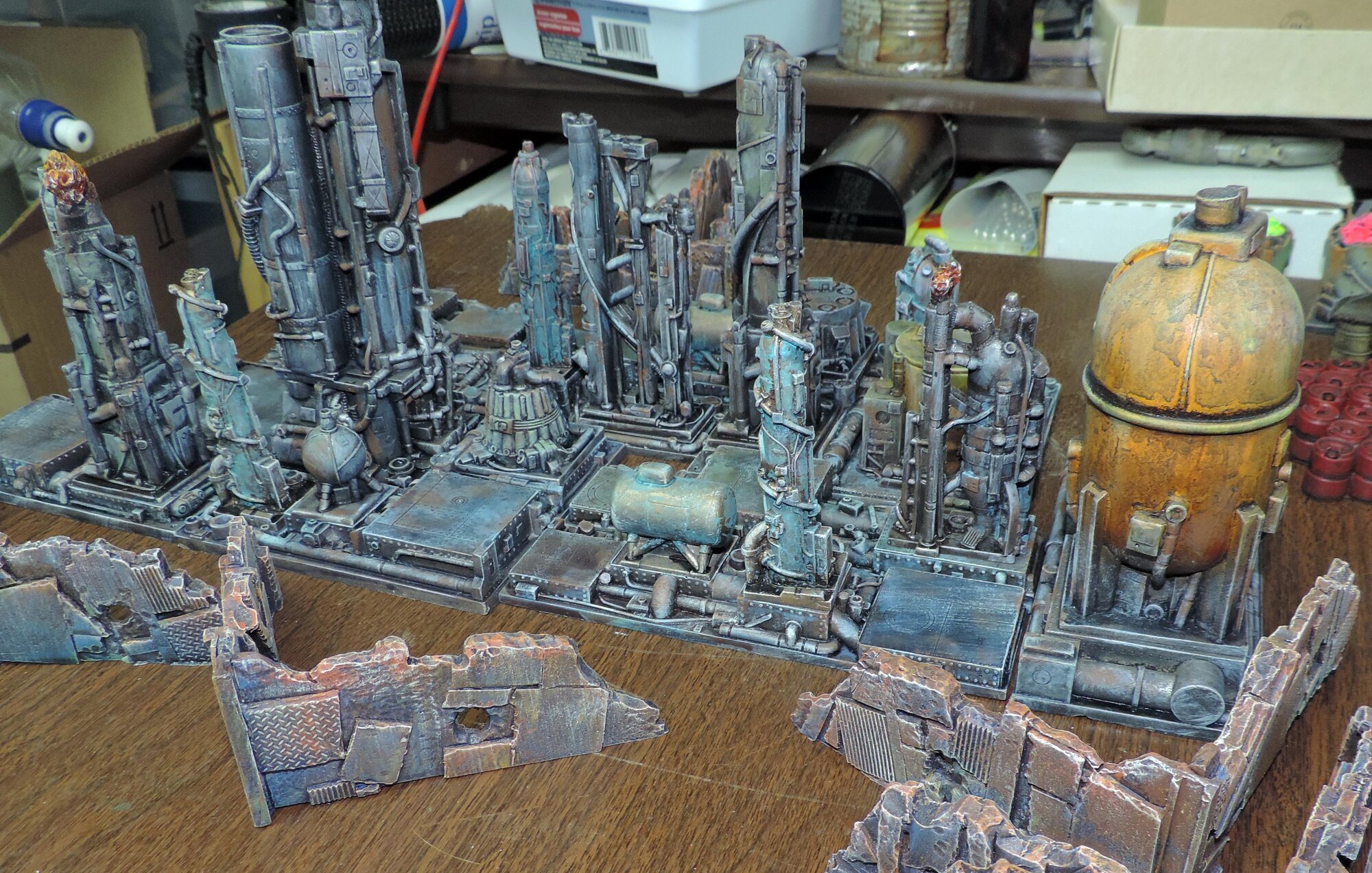 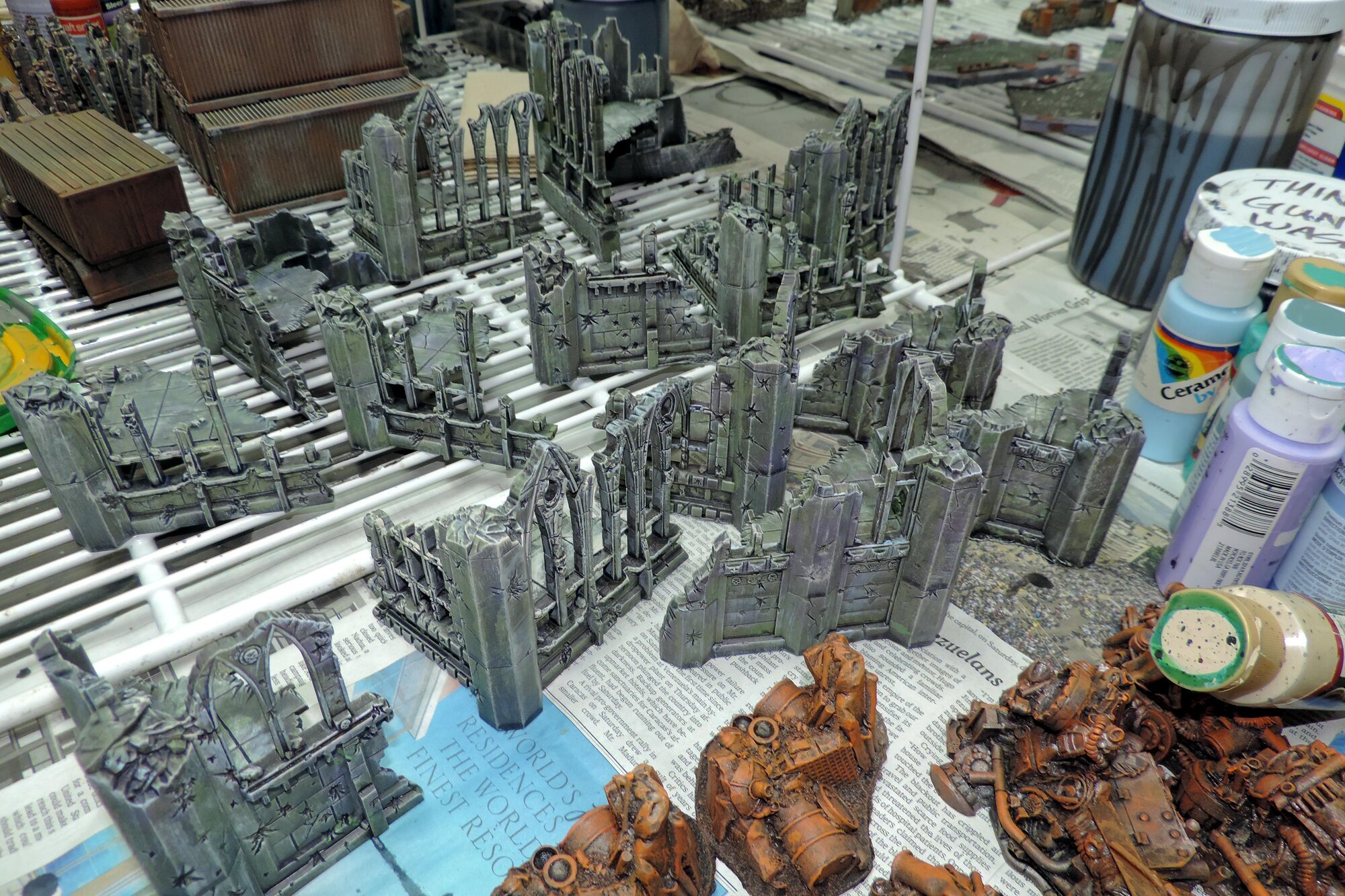 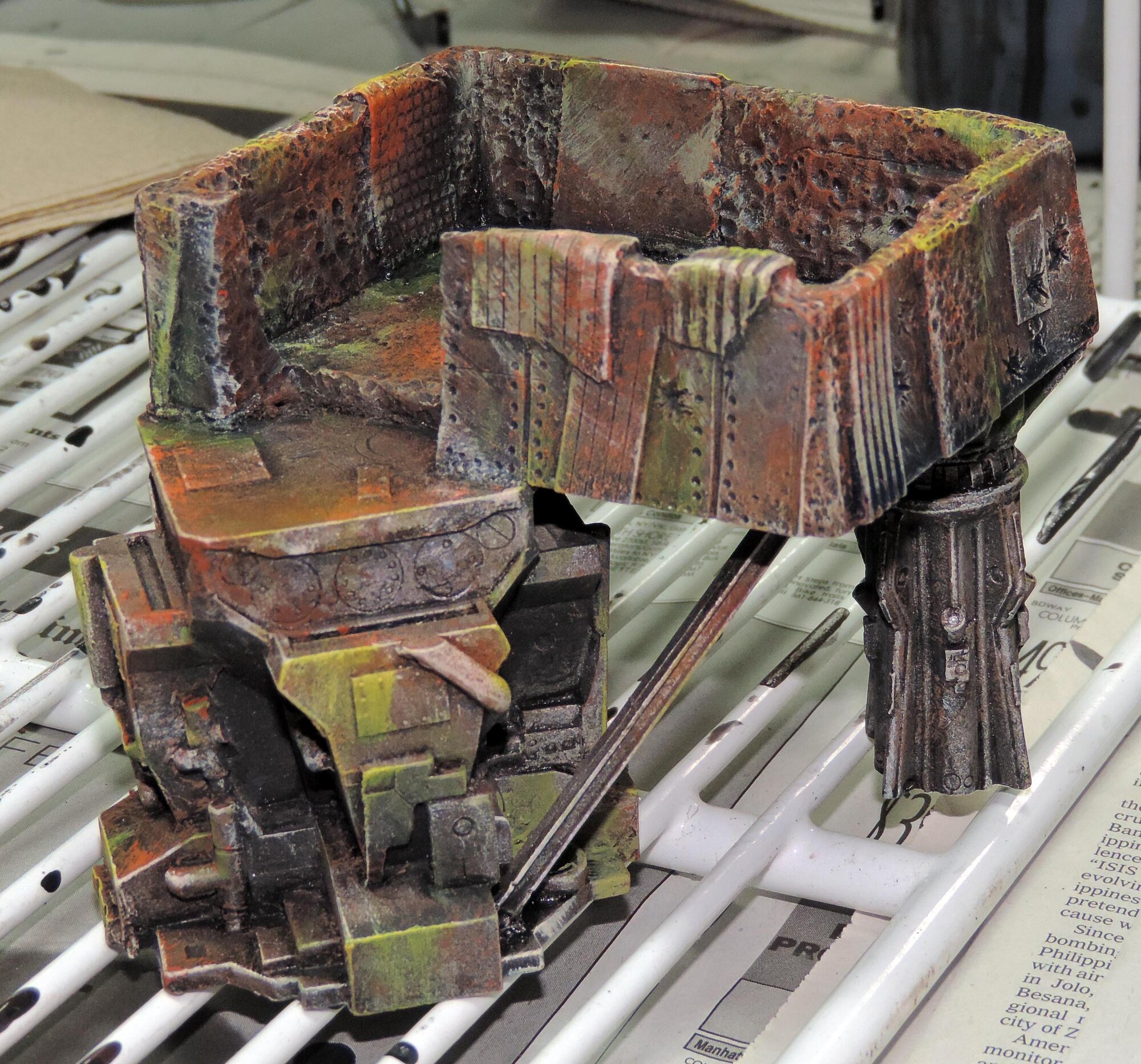 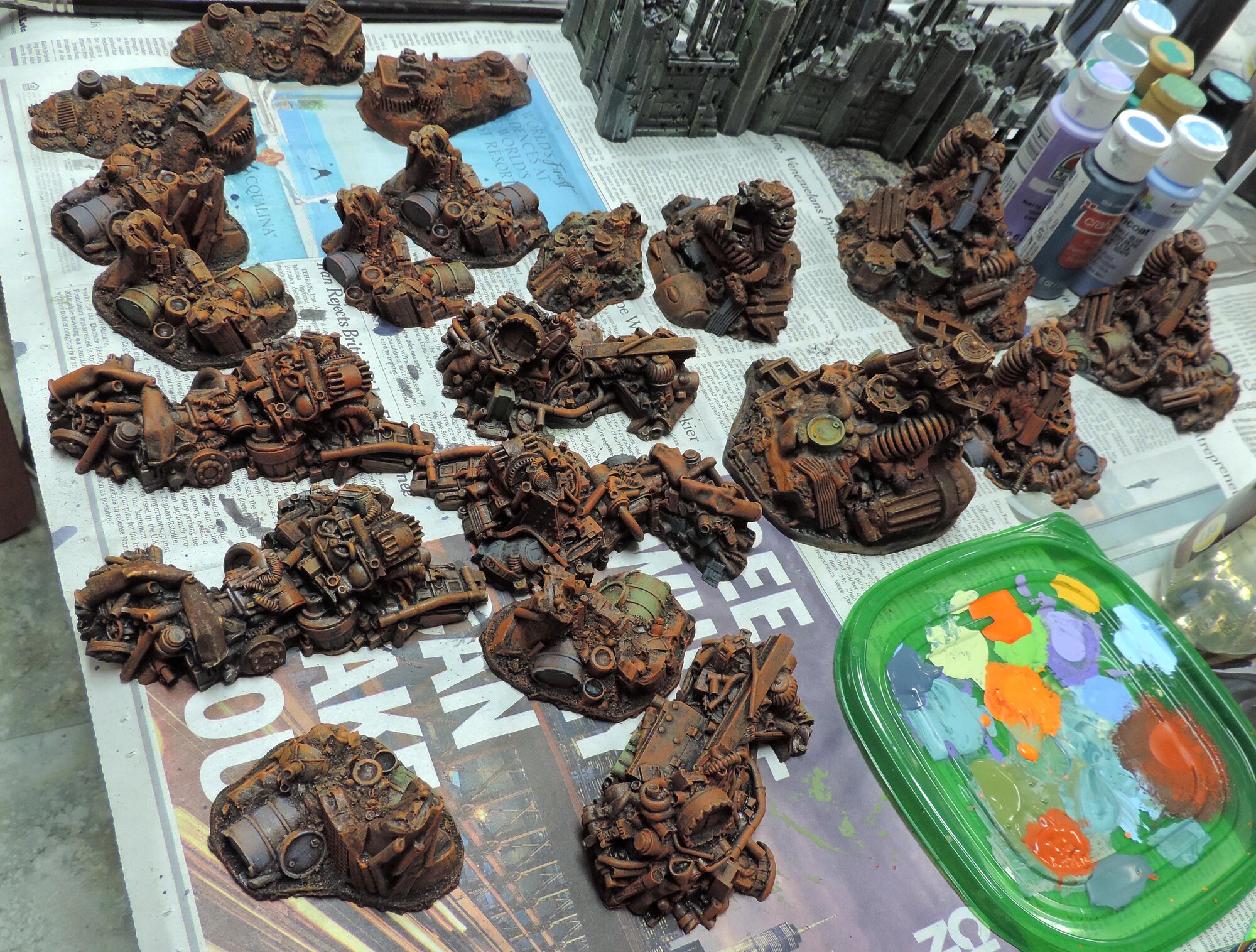 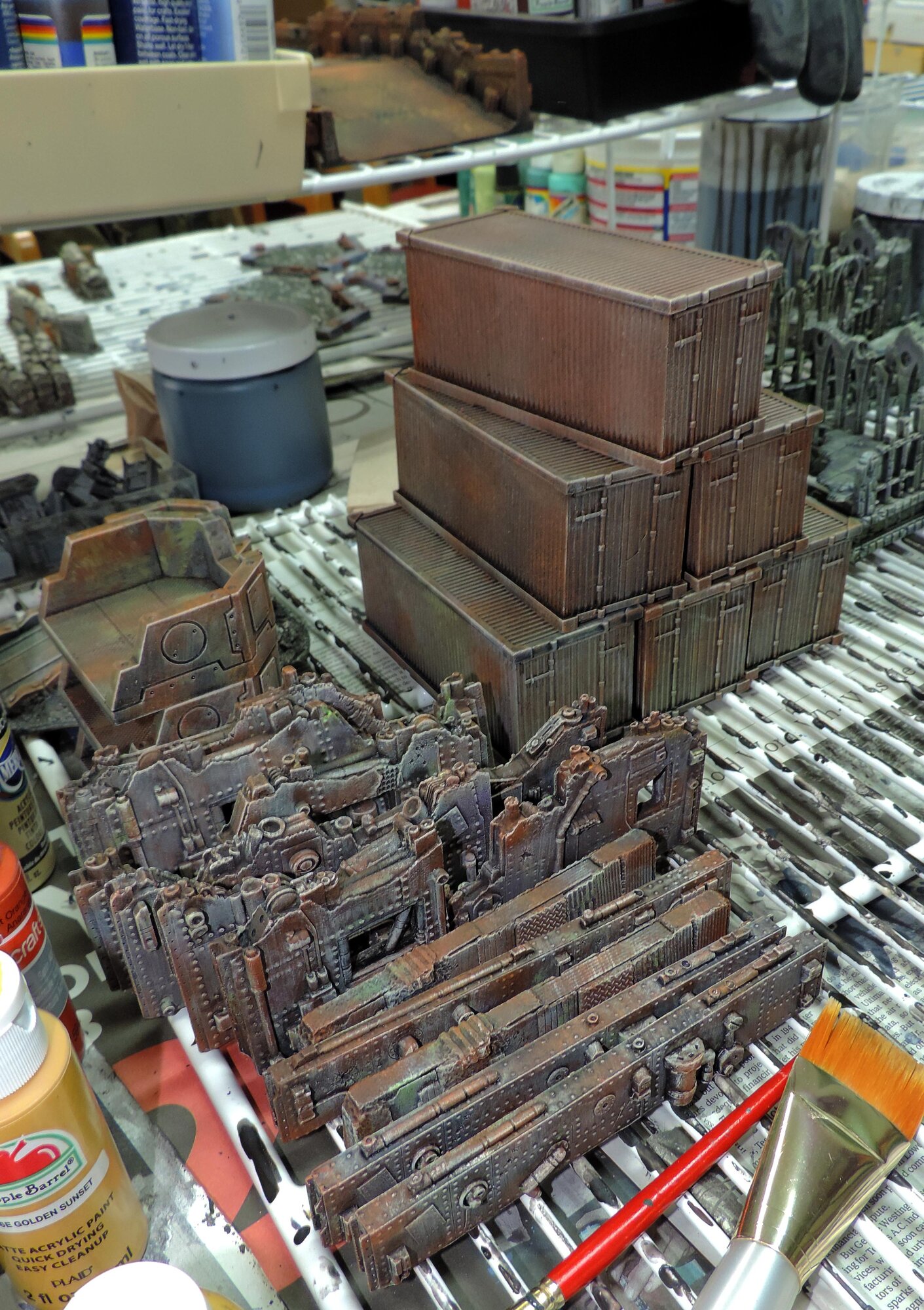 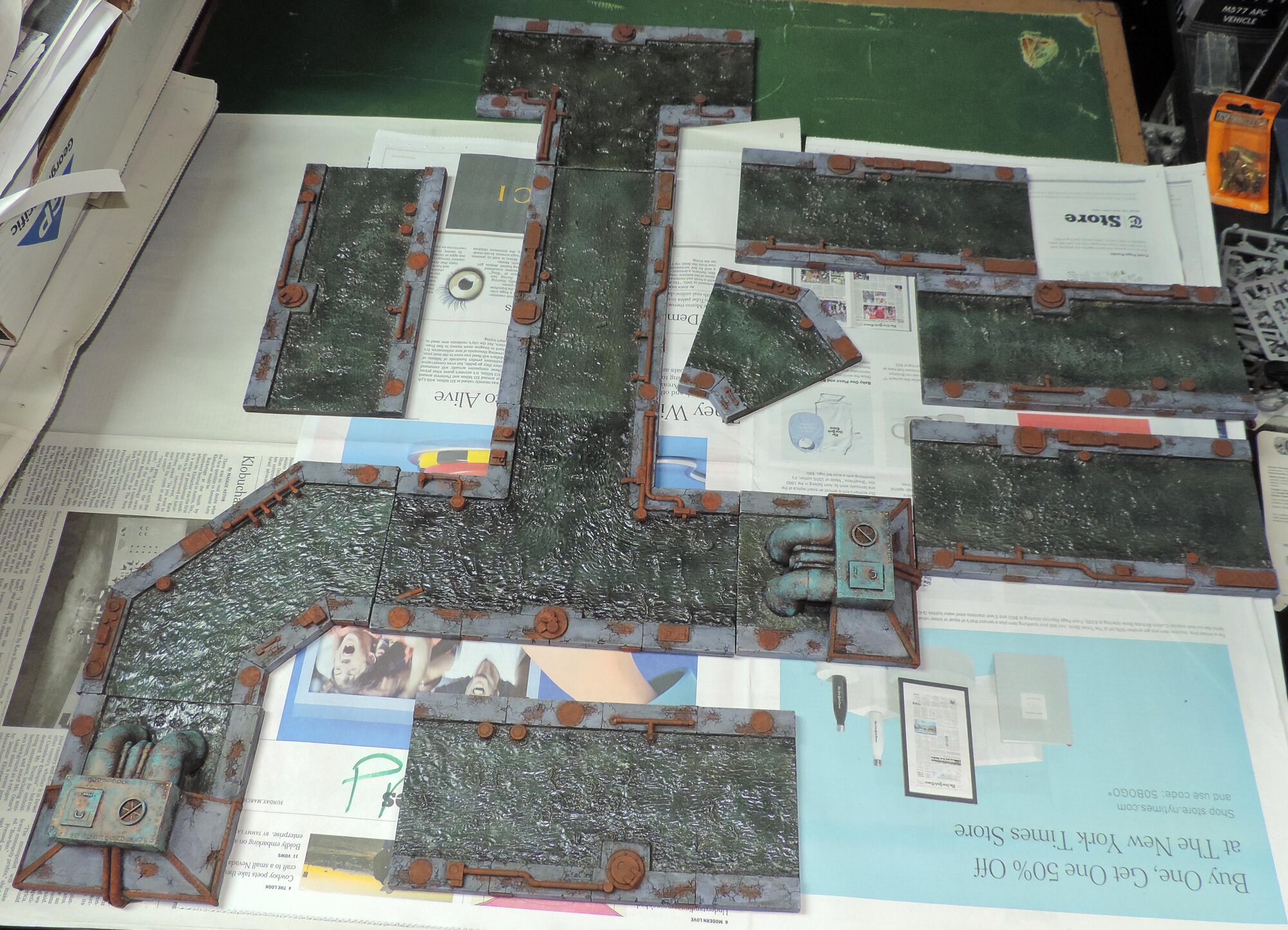 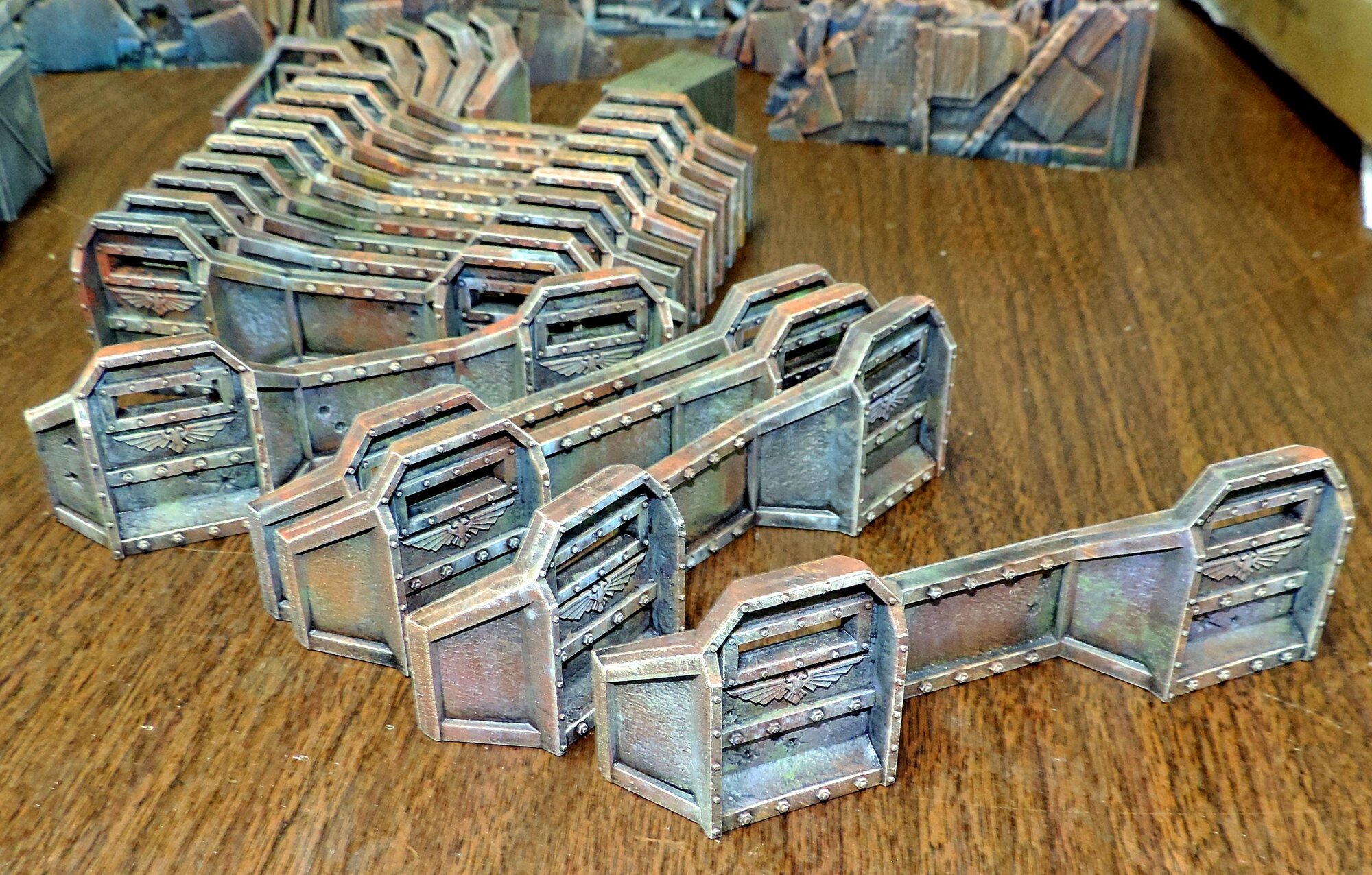 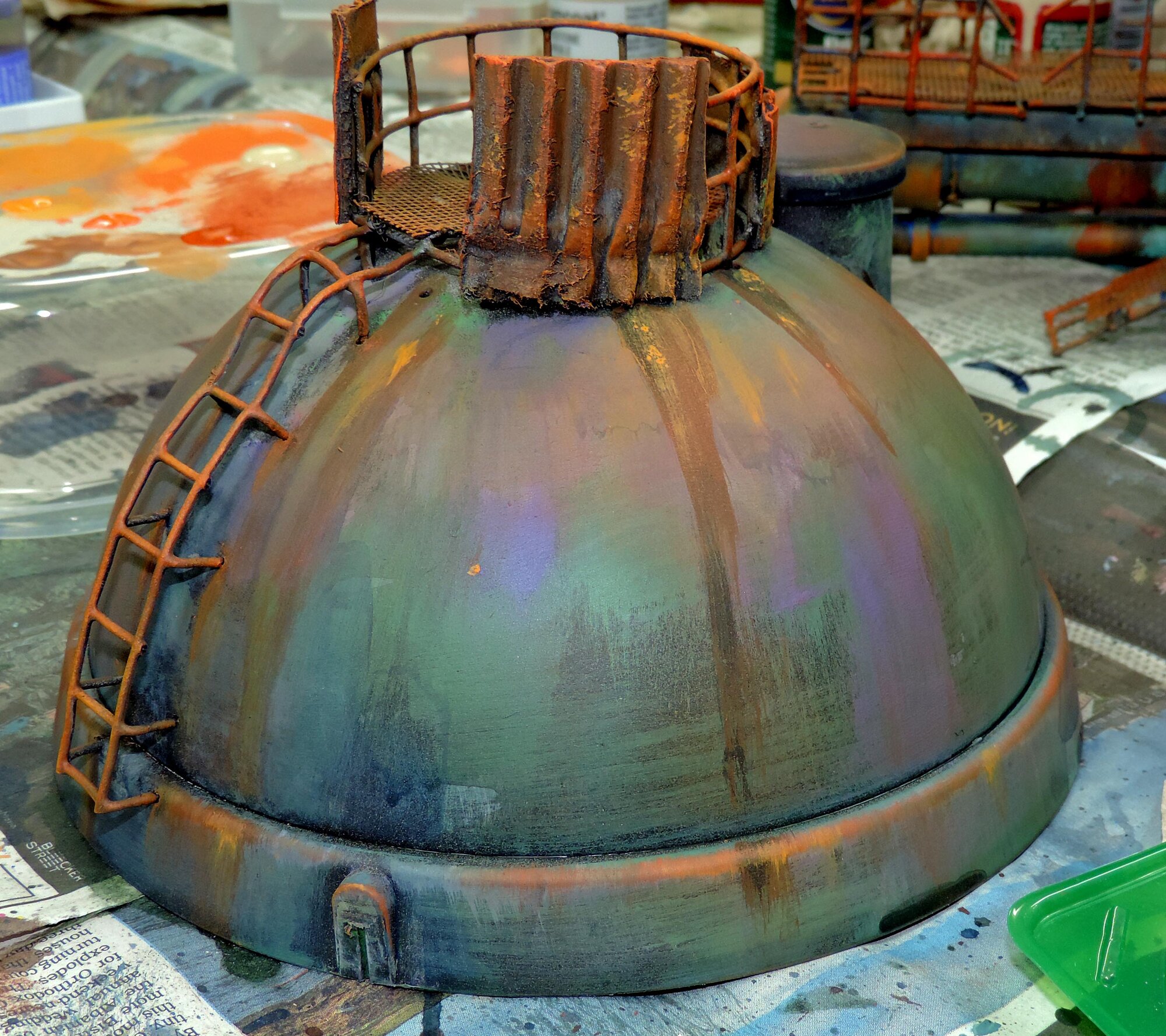 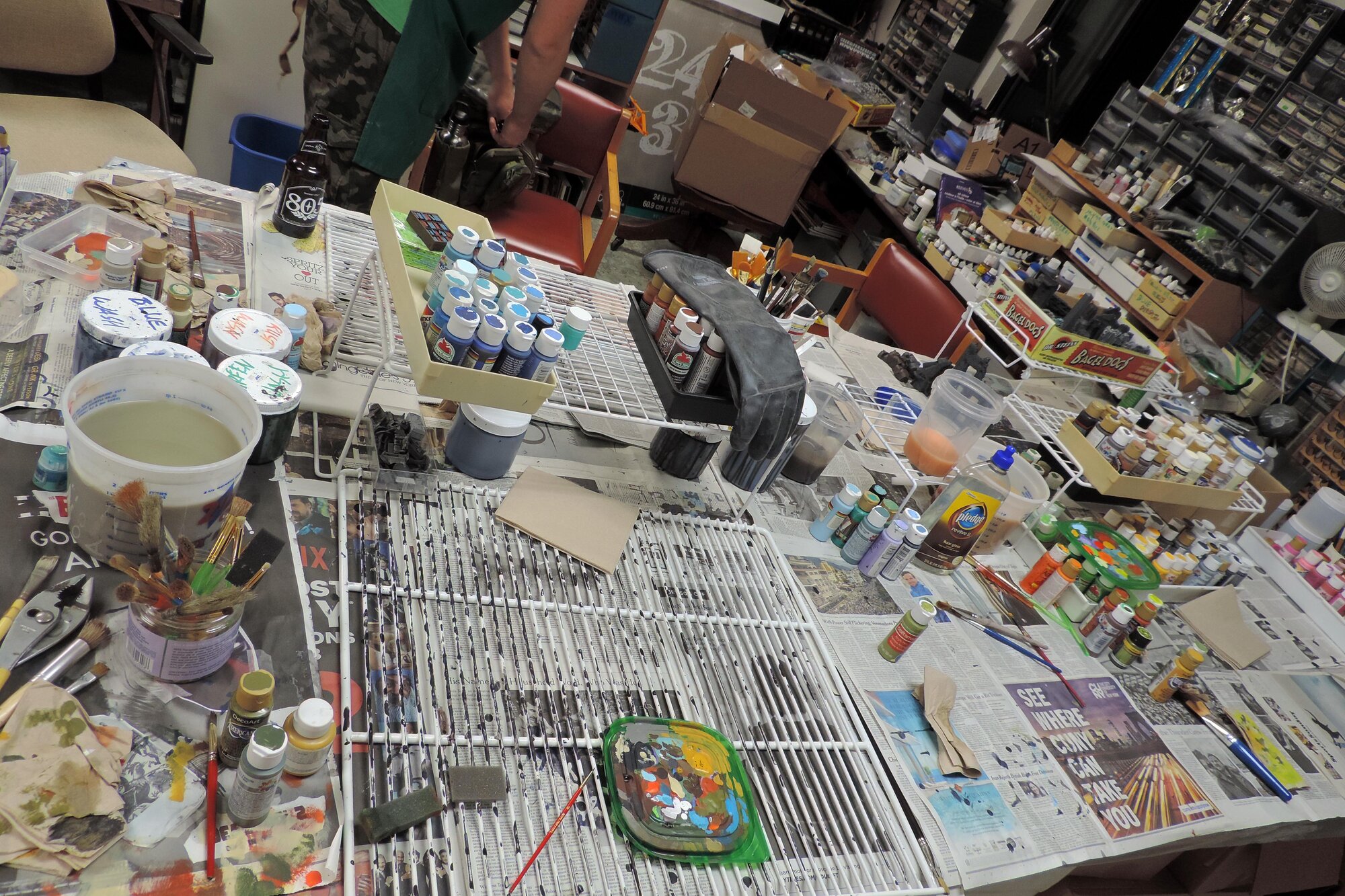 It's really hard for me to imagine not using black and white, but I like it so I liked it!
Reactions: timdp

Very nice. I like the refinery in particular.
Reactions: timdp
D

It all looks bloody fantastic!

What is the technique for the quick paint rusted crap?
Reactions: timdp

What is the technique for the quick paint rusted crap?
Click to expand...

LOL! That should be "scrap", not "crap". Edited...
These had been sprayed with a medium silver metallic paint or bronze metallic paint. Some of the larger pieces had details that had been painted with that two part rusting paint, so I tried to leave those details alone. 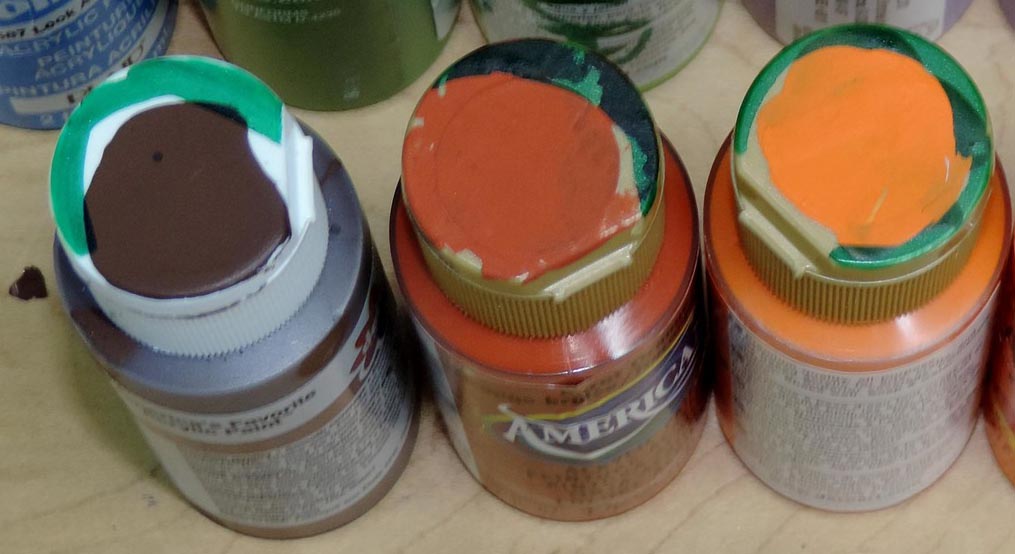