Show us your Blood Bowl teams! 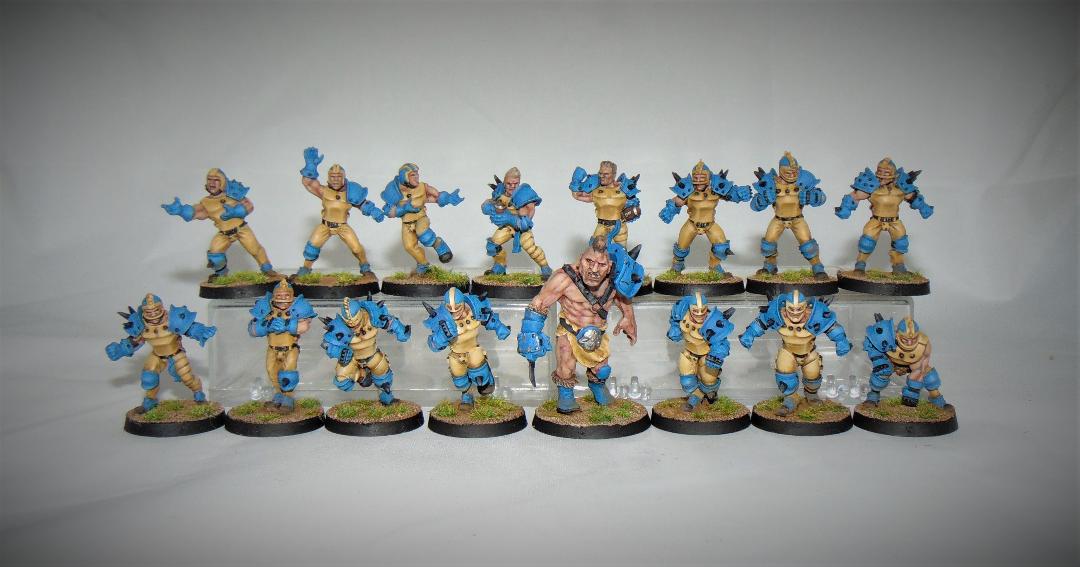 Reikland Reavers in their 2nd Edition colours.
P.S. I
Reactions: almic85, DArquebus, Biggle_Bear and 6 others

'If it's an album on here, the camera icon in the reply, click that and you can select any photo fro myour albums in a bit that appears below the post.'

It is indeed, very nice dude!

Reikland Reavers in their 2nd Edition colours.
P.S. I
Click to expand...

Nice Reikland Reavers. Where have you hidden Griff Oberwald & Zug? These two played for a long time with the Reavers.
B

I'm currently re-varnishing a lot of my stuff, but I hope it will give me chance to show off some of my complete teams. I did post some of these guys early on in this thread, but here I have the full squad (24 models):

Before varnishing them, I took the opportunity to paint the base colours, as some opponents have had difficulty recognising some models (Blitzers mainly).

They're designed to do double duty as Pro Elves (or in fact any of the four Elf teams), hence the four Catchers (and two Throwers). In a Dark Elf team, I'll probably use one of the Catcher models as my Runner, but I don't think that would be too confusing.
Reactions: DArquebus, celticgriffon, CaptainDangerous and 4 others

Wasteland said:
Nice Reikland Reavers. Where have you hidden Griff Oberwald & Zug? These two played for a long time with the Reavers.
Click to expand...

Oh i've got two different Griff's, and a couple of Zug miniatures (including the rare one holding his helmet in the air). They're just painted in different strips due to them being star players so wouldn't fit in with the team strip.
B

I think all of these have been in my plog at some point, but here's a chance to show them together, which is helpful since they complement each other.

First of all, the main part of a Nurgle team - Beast/Rotspawn, Pestigors, and Warriors (I made six just so I could model Claw options):

Obviously, they're not a complete team without the Rotters, so here are my Rotters:

The ones at the back (Chaos Marauders with Zombie heads) were originally made to be my Rotters, but they can also double as Marauders for a Chaos Pact (or Renegade) team, hence I made the Goblin, Elf, and Skaven in the front - though these can also fill in as extra Rotters if needed.

The Warriors were done long ago, when I was working on my WFB Warriors of Chaos army - hence the square bases (I'd sometimes use these at the back of a unit, where being unarmed wasn't obvious).

The Beastmen were done more recently, when we were playing a 7s league. While 4 Warriors and 7 Beastmen is *just* enough for a full team, my intention was to do another batch at some point. It's not pressing though, as I can supplement them with Pestigors from the Nurgle lot above if needed.

So, that's 32 models but it gives me a complete Nurgle team, a Chaos team (no Minotaur), and most of the options for Chaos Pact (I just need the big guys and an Orc). Had I been more interested in efficiency, I could have cut six Warriors and done it all in 26 models.
Reactions: almic85, DArquebus, Biggle_Bear and 6 others

It’s been a long time since these have been out the box but this is my human team from the box set....

They’ve got a game tonight so wish me luck!
Reactions: almic85, DArquebus, ThreeDice and 7 others

Cheers Spafe! Don’t know yet but I’ll try and do some running commentary on the grim dark north east thread!
https://yaktribe.games/community/threads/the-grim-dark-north-east-uk.5507/page-18#post-168170

Managed to steal.....I mean take some photos of @MordianBlue’s teams last night!
All credit goes to him so please save any likes for if I can manage to coax him here!
Come @MordianBlue, take a bow and explain your teams and any prolific victories? (Don’t include the one from last night!) 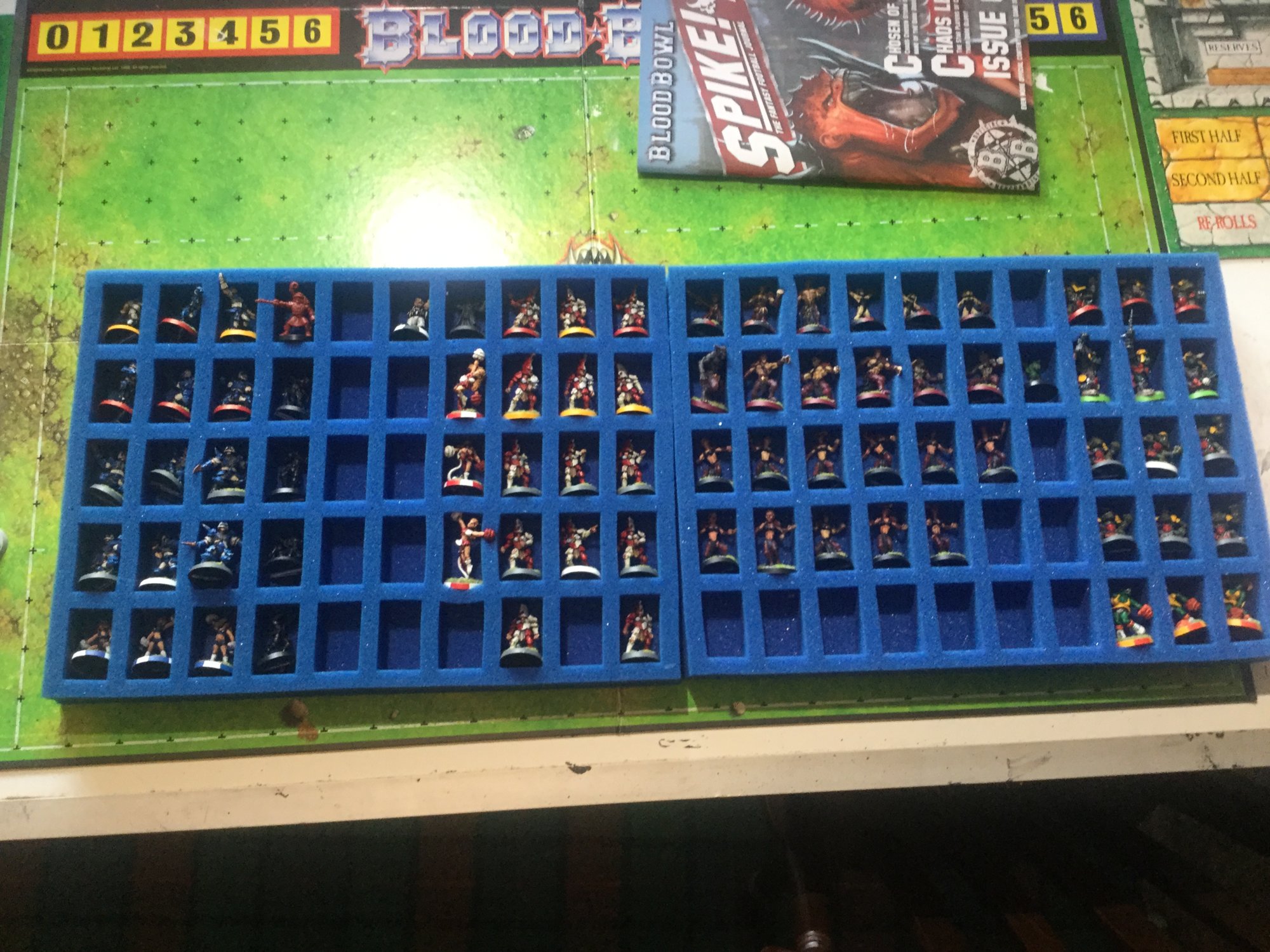 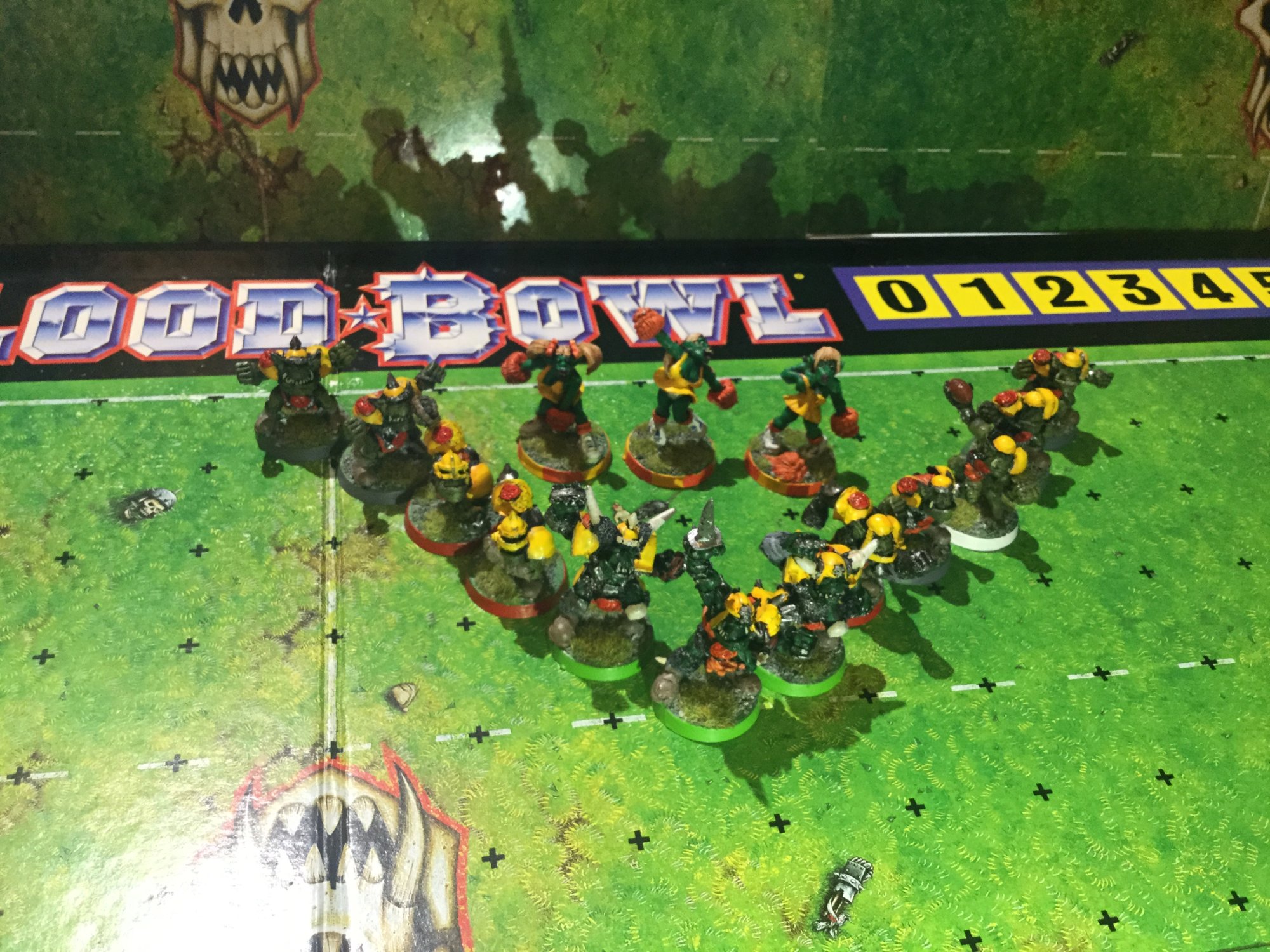 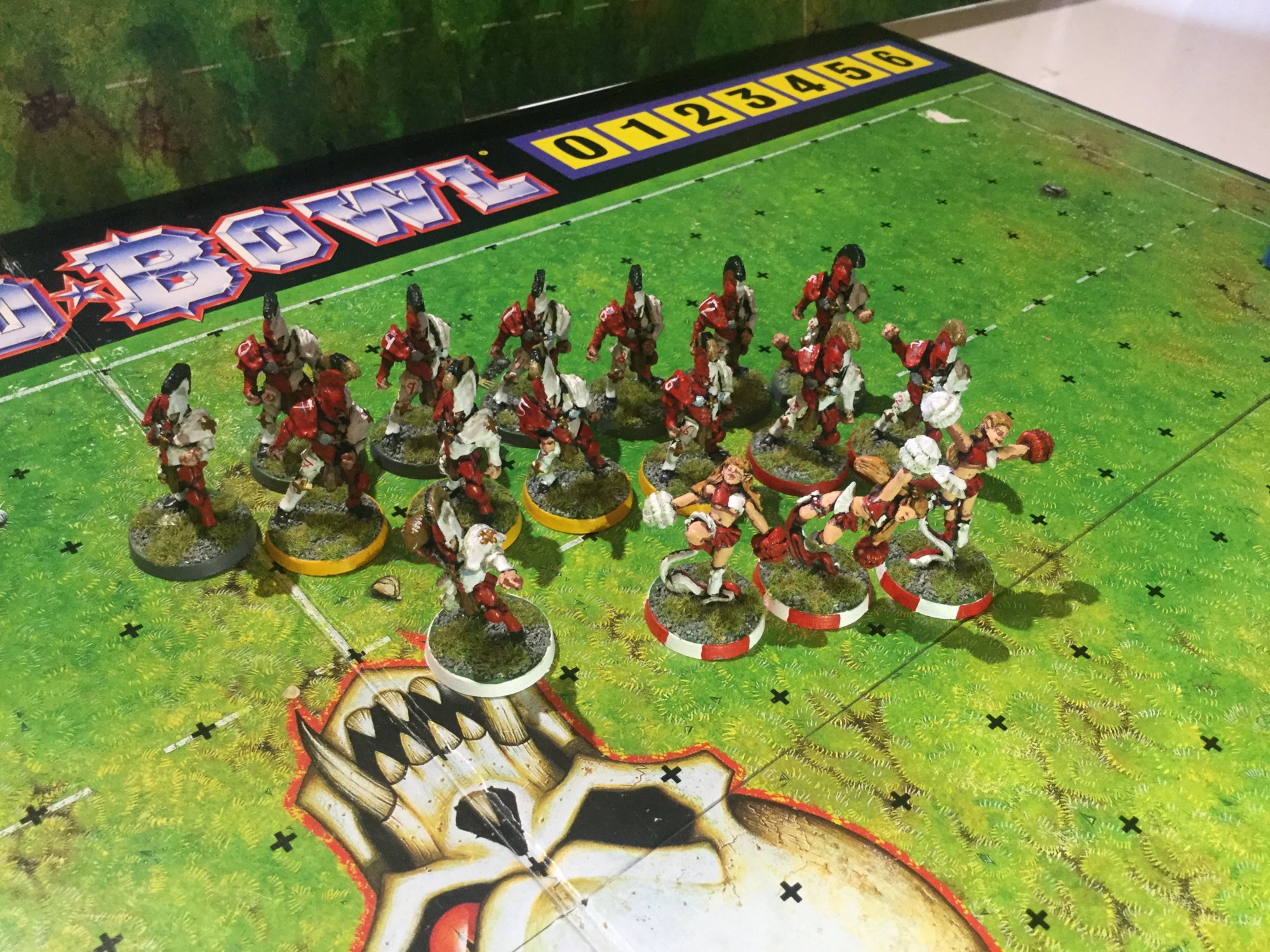 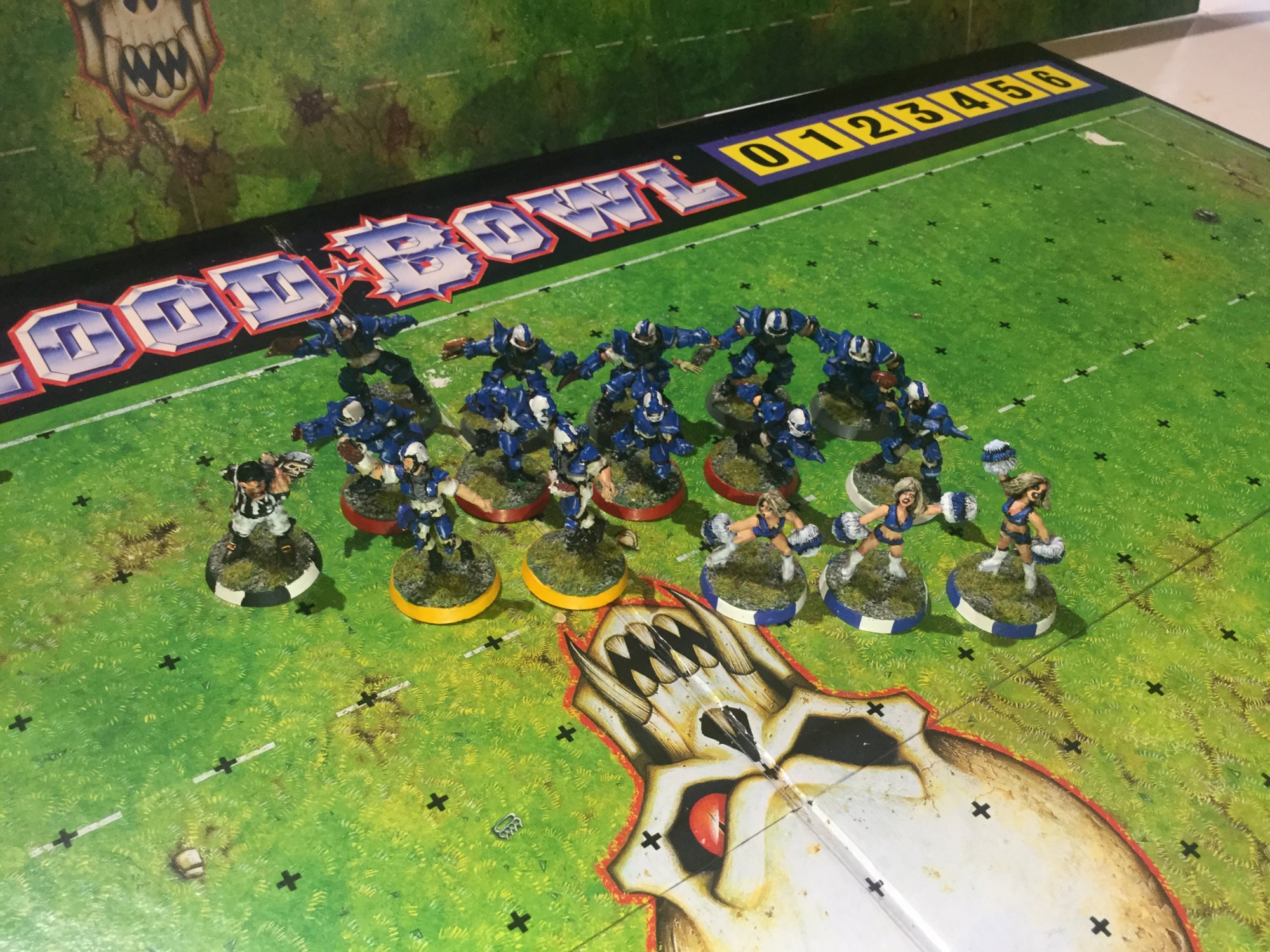 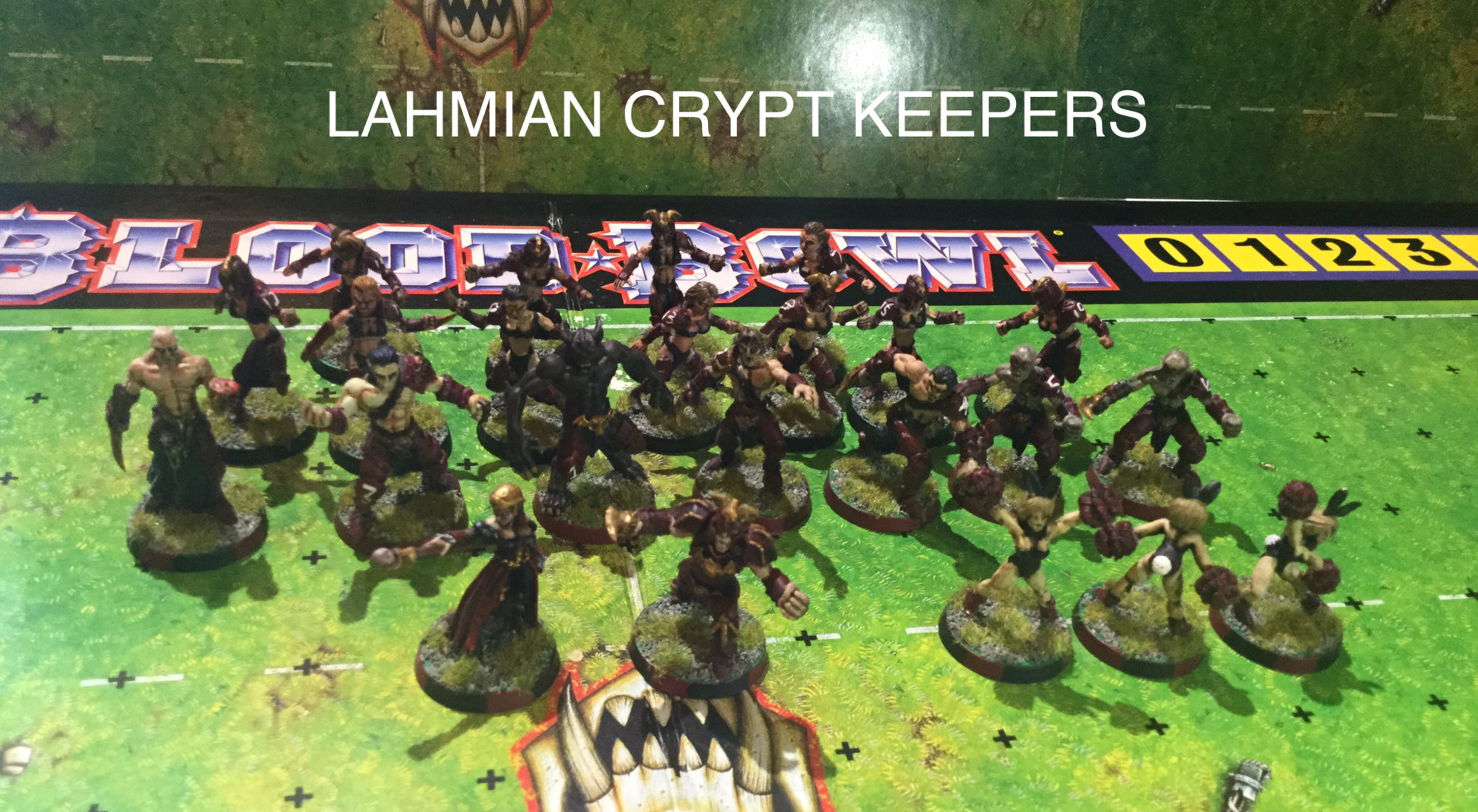 Yup those are my teams, no real notable wins to speak but I'll explain what they are:

Vampires
The only team with a name the: Lahmian Crypt Keepers
The vampires and thralls are GasperzArts miniatures, the cheerleaders are shadowforge and the coach is a Warhammer Fantasy Lahmian vampire.
-Painted by @pressure

Humans
5th edition Games Workshop human team with shadowforge cheerleaders and the good old ref keeping an eye on them.

High Elves
Models are Black Scorpian human team, not much difference between the positionals so had to paint the base rings and then extended that to all my other teams, they also have shadowforge cheerleaders.
Reactions: ThreeDice, DArquebus, Biggle_Bear and 4 others

The Hel Fenn Headstones have appeared on Yak elsewhere before but not in this most appropriate of places. 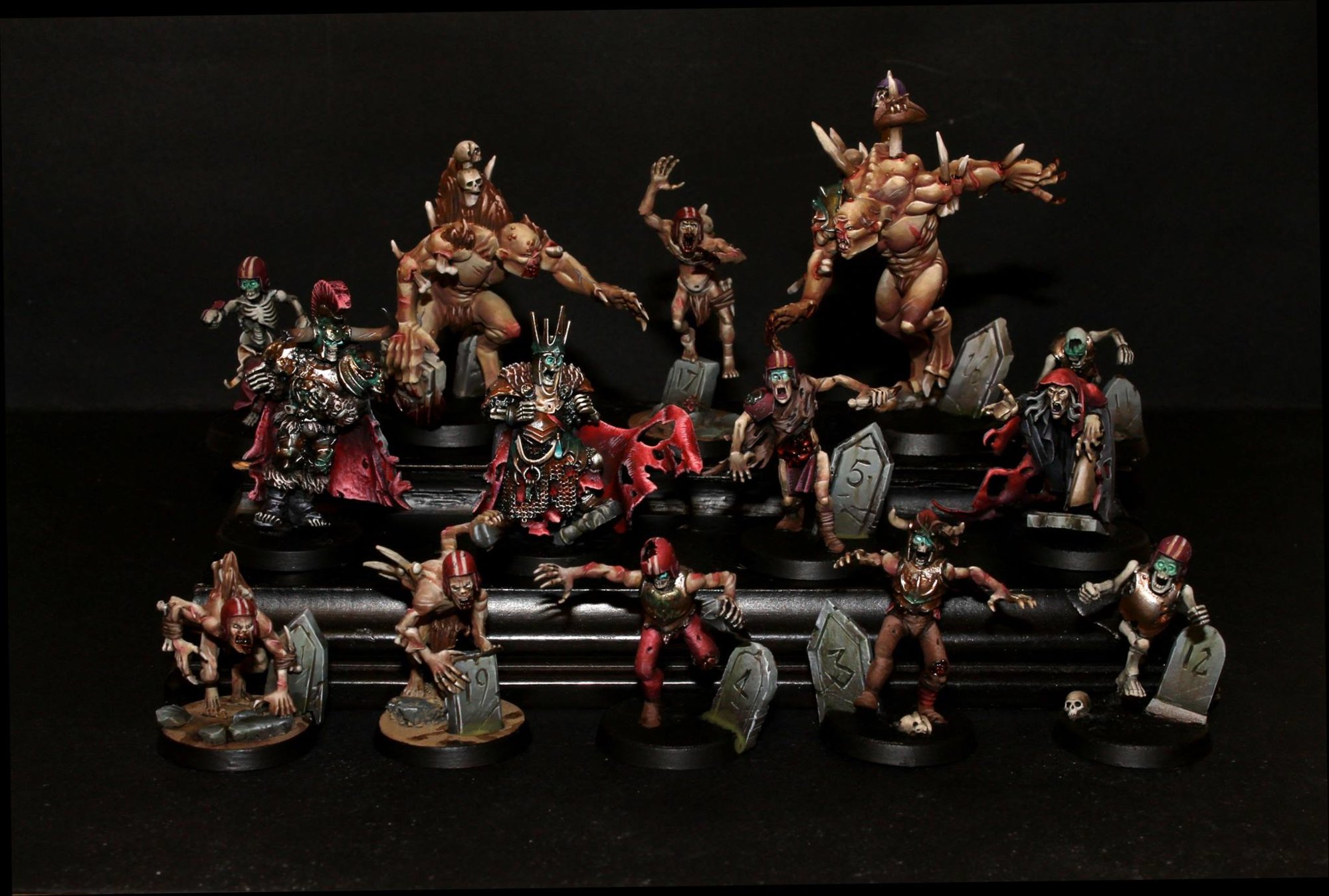 These are all GW ghouls, zombies, eights, skeletons and crypt something or others... big ghouls let’s call them, from the Warhammer range. I used the big ghouls instead of mummies as mummies feel out of place in the otherwise Old World located Undead team. Helmets from Comixininos and lots of modifications completed the models. I spent so long making them that I both couldn’t face painting them and wanted to have an extra special paint job on them so I got them commission painted by a pro painter who now works for GW and paints all their blood bowl teams (among other things)!
Reactions: almic85, Howie, Aulenback and 12 others

They’re almost as nicely painted as that pro painted gor half horn you got for secret Santa!
Reactions: Biggle_Bear

Arguably the coolest Blood Bowl team I have seen. The conversions and paintjobs are simply outstanding. Nice work on those!
Reactions: Fold

I'm annoyed that I could only *click* like just once for that team. Absolutely fantastic with the painting and conversions.

The captain and made these teams ages ago. 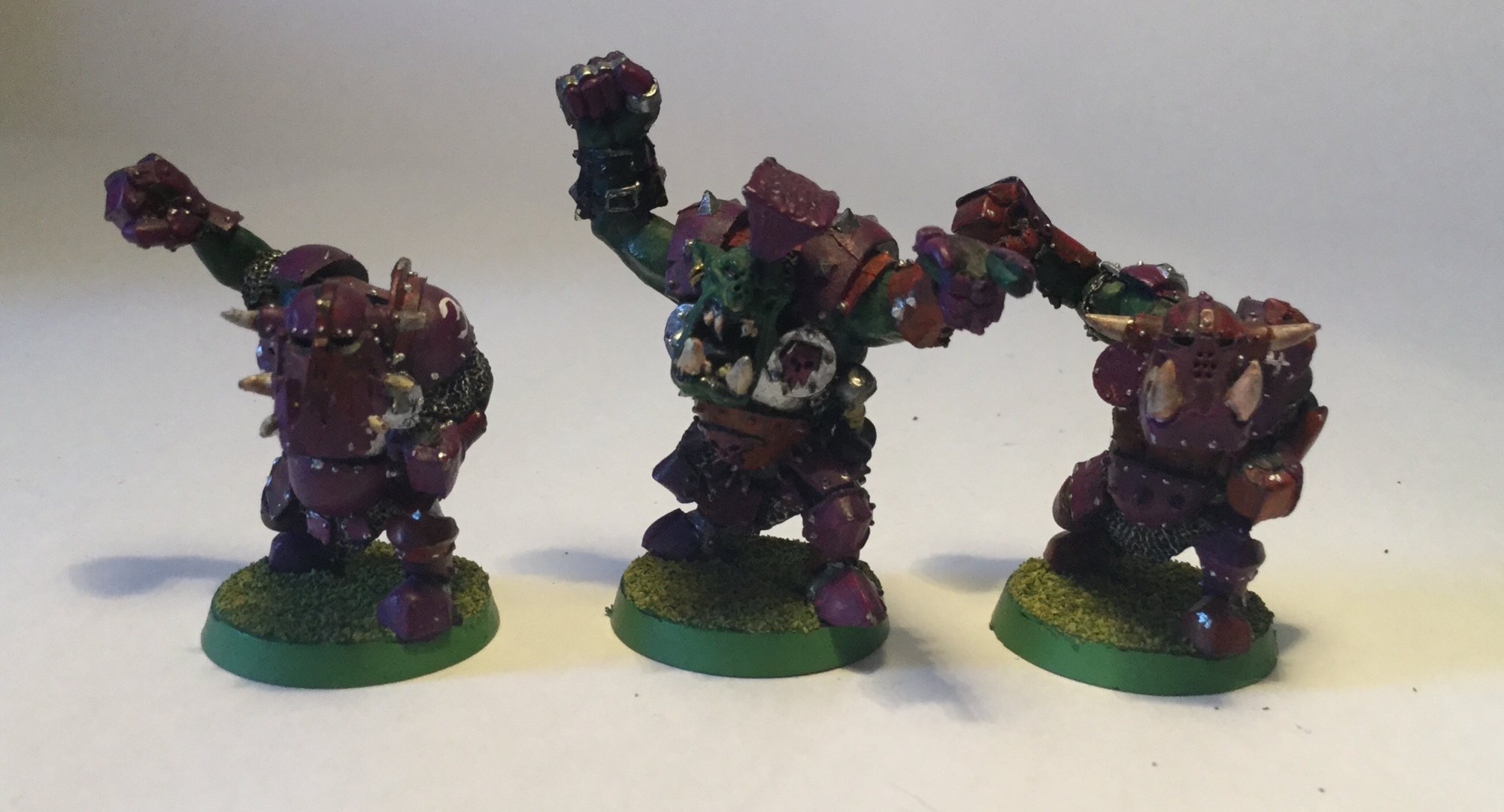 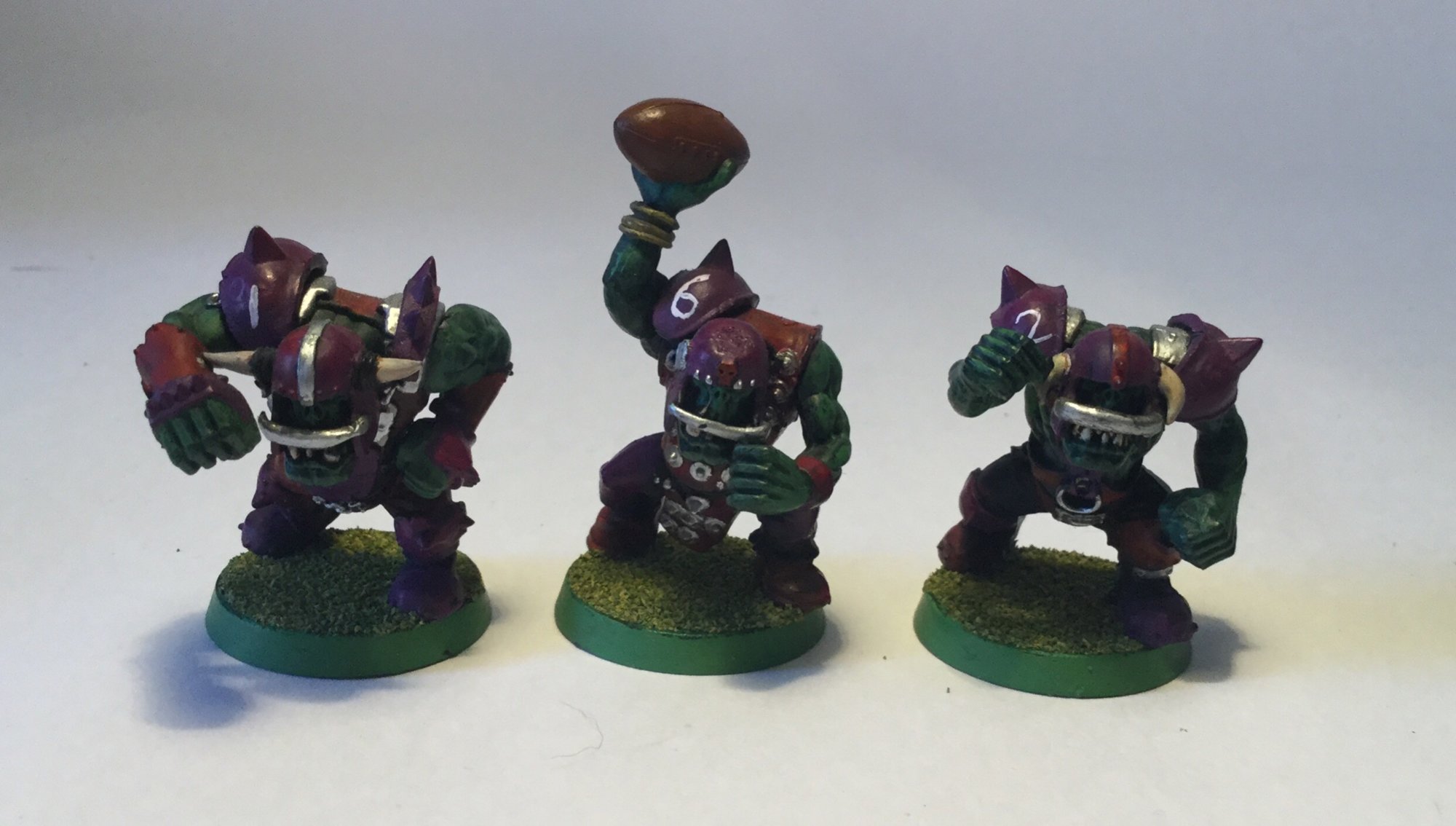 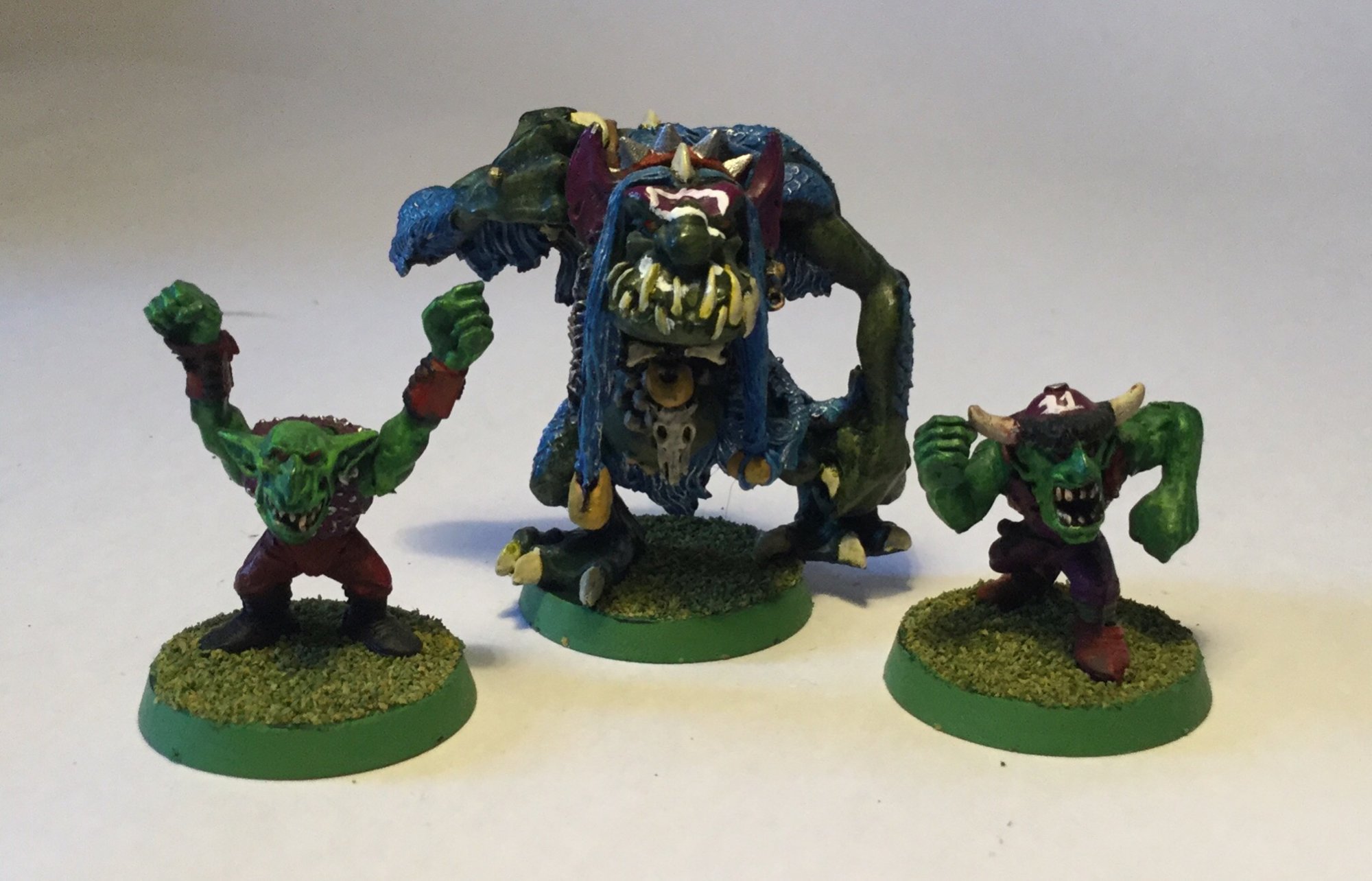 My orc team. I think they only saw one game.
Reactions: almic85, ThreeDice, Ben_S and 4 others 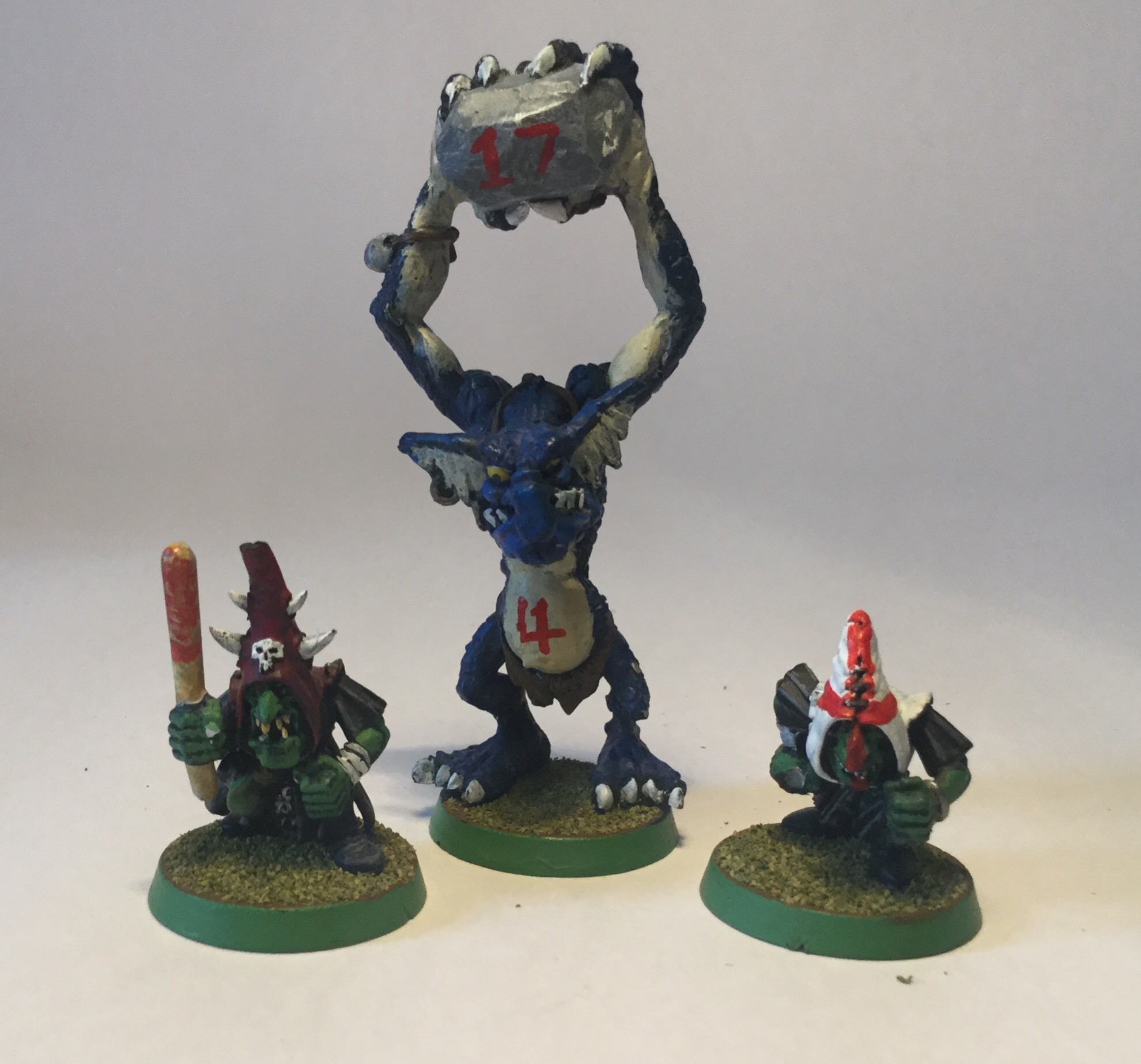 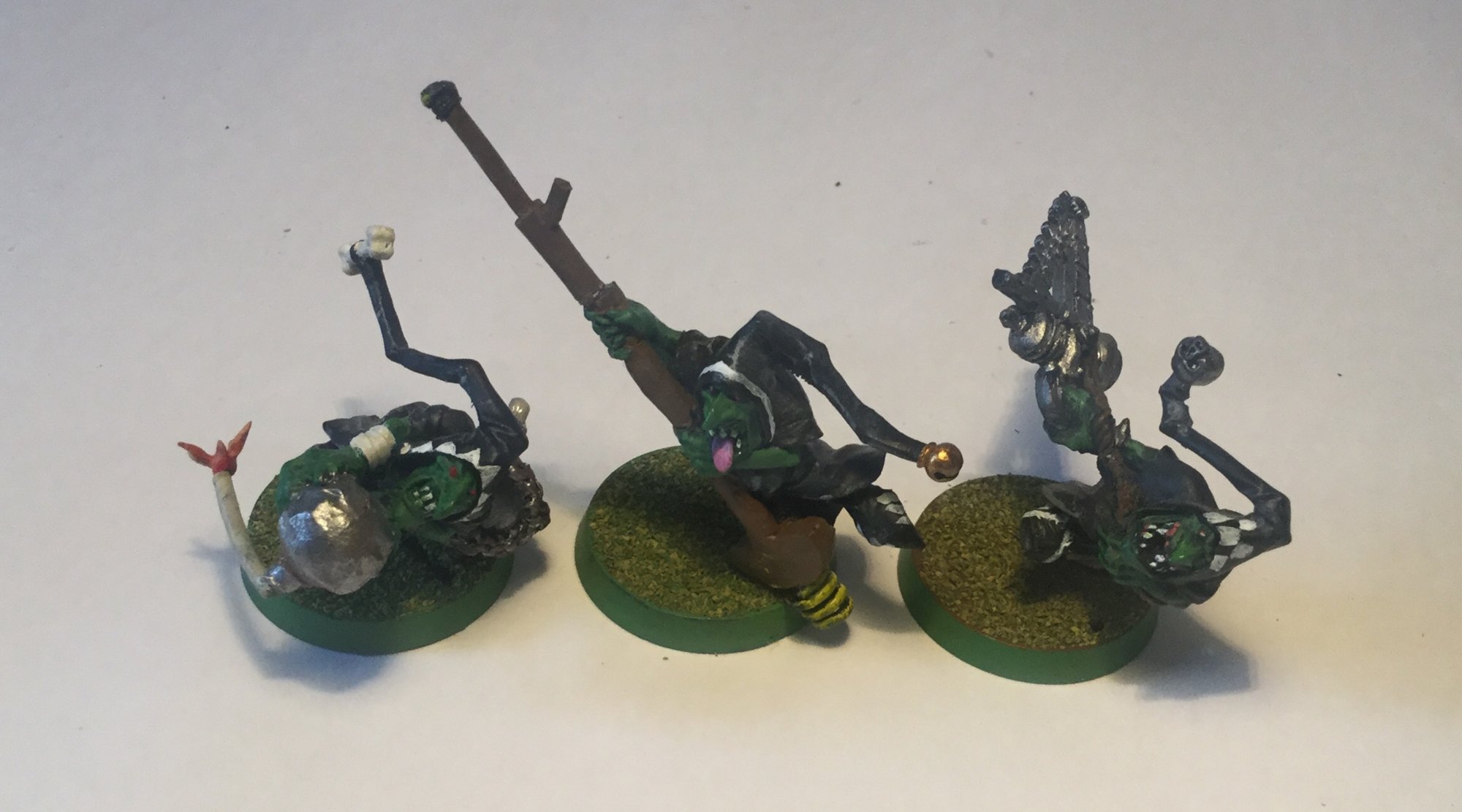 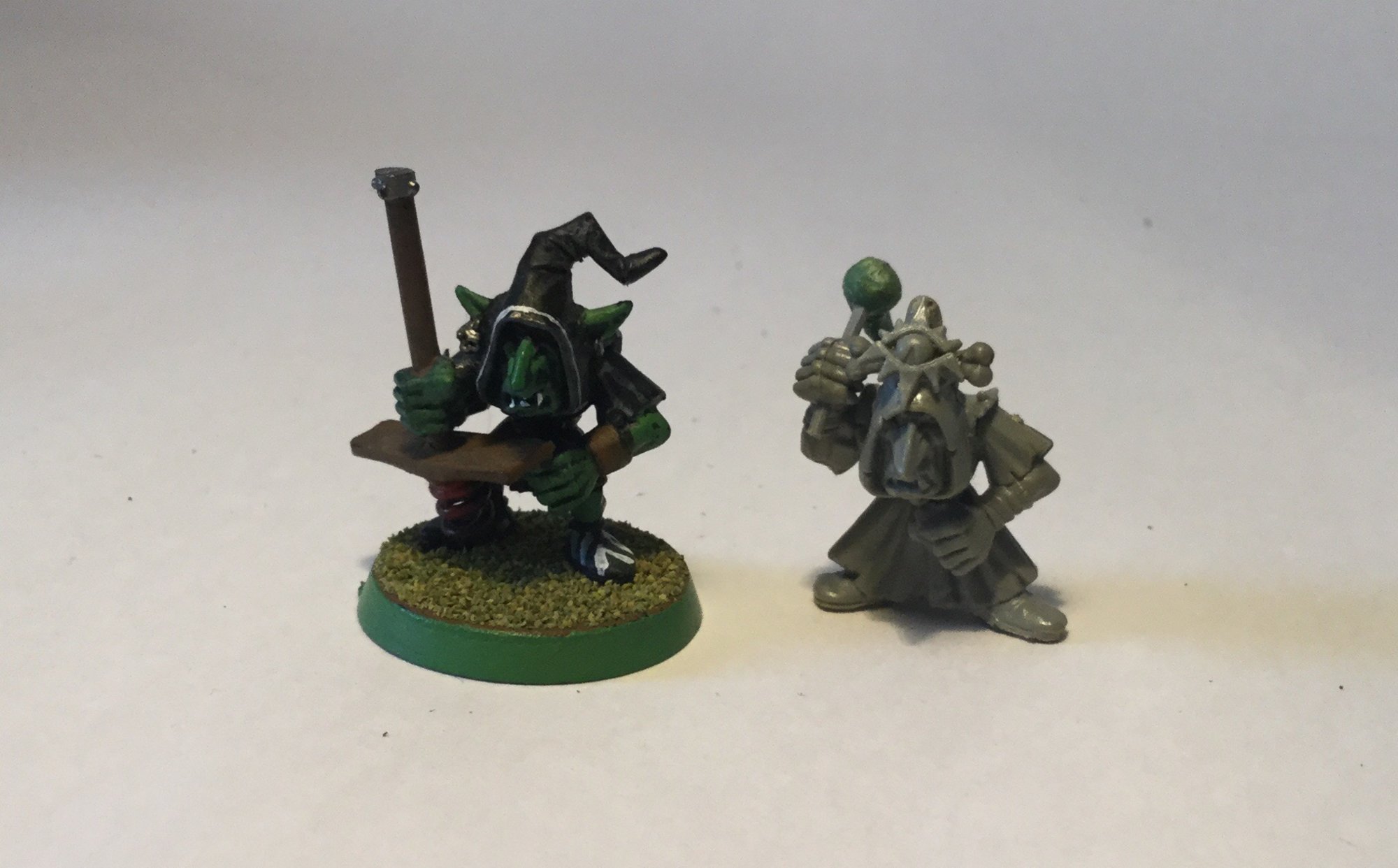 Goblin team. These were so much fun to play, and surprisingly not so uncompetitive as I thought.
Reactions: almic85, Aulenback, ThreeDice and 5 others

I like the idea of having a player number on the rock
Reactions: Aulenback and Biggle_Bear
Show hidden low quality content
You must log in or register to reply here.

Anyone have the chainrasp hordes instructions?