today i decided to make a new thread to show you my necromunda "wip" conversions.

probably u know my GorkaMorka-thread, here i want you to show all minis i make for Necromunda.


first i start with a mini i made this weekend. i had so much fun with converting the new GWs khorne- minis for my gorkamorka DIGGAs so i wanted to make some conversions for Necromunda.

All my gangs started with a leader.... i will make some really "big" Goliaths (like my big Diggas in GoMo.)

The leader is made from the new khorne wrathmongers. witch a magnetic torso to habe more options in a campain. the head is from a space wolve (i love this "war-screaming" face) 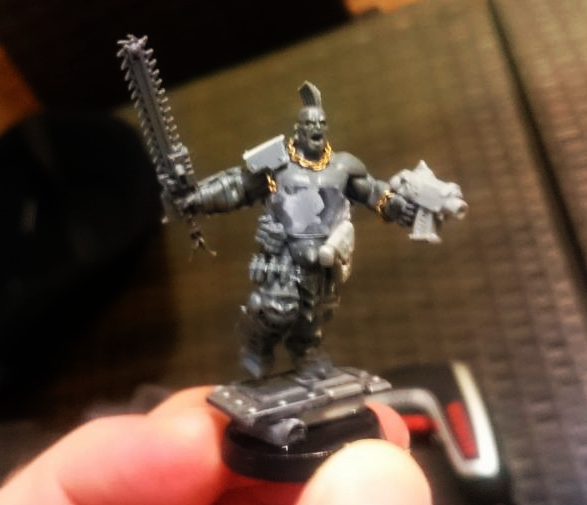 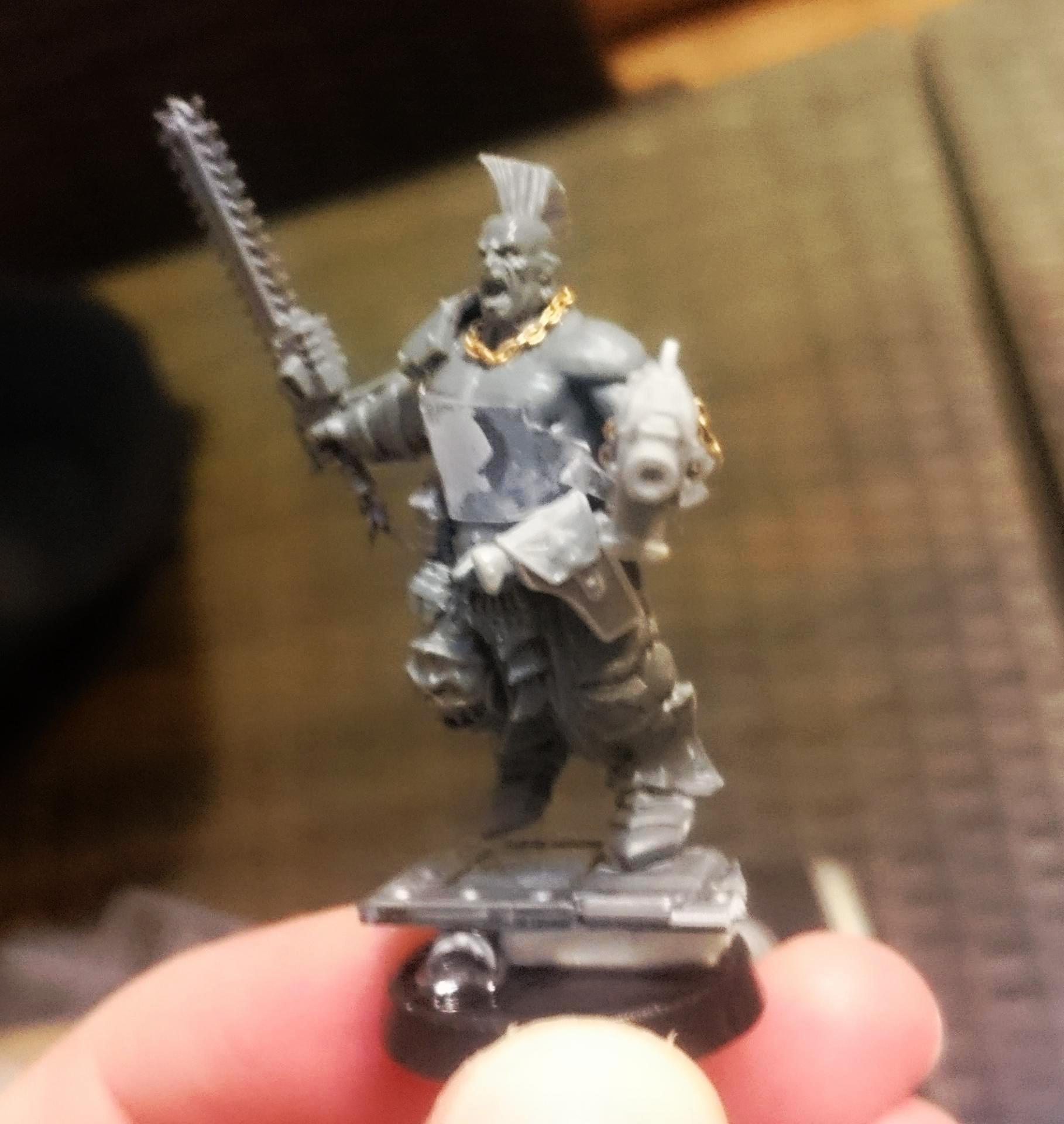 im not sure with the base. i think i will make a smaller base. this is to big and distracts from the mini.
Last edited: Jan 9, 2017
Reactions: FerociousBeast, dabbk, Loriel and 6 others
B

You could make a smaller base, but I don't think that one detracts too much from the miniature. The key to avoiding distraction, I think, is to keep the colours on the base relatively uninteresting.

He is amazing meine kommisar! I think when you do the rest of the gang maybe do less for the bases, but for this guy what you have is great! I especially love his pose! He looks so fearless!
He cares not for enemy fire, his chainsword thirsts for blood!
And (along with the chains) I think the belly plate is becoming your signature! Really cool, can't wait to see what's next! (Or to see more of your amazing painting)
Reactions: Kommissar Shriken

hello Captain! its always a big pleasure for me to read your feedback. this gives me a lot of motivation! many thanks!

haha this would be a good title for me "belly plate wearer" :-D


Today i have no Update, but some pics of a running idea from 2016 i never accomplished.

i always wanted to make a Necromunda-Gang from the old metal- Space Marine Scouts because i love the mini and pose from the Scout-Sergeant.
But i need a Dremel to cut of the Imperial Eagle from the Armours. And the Weapon-Changes are very hard to do with the old metal-minis. 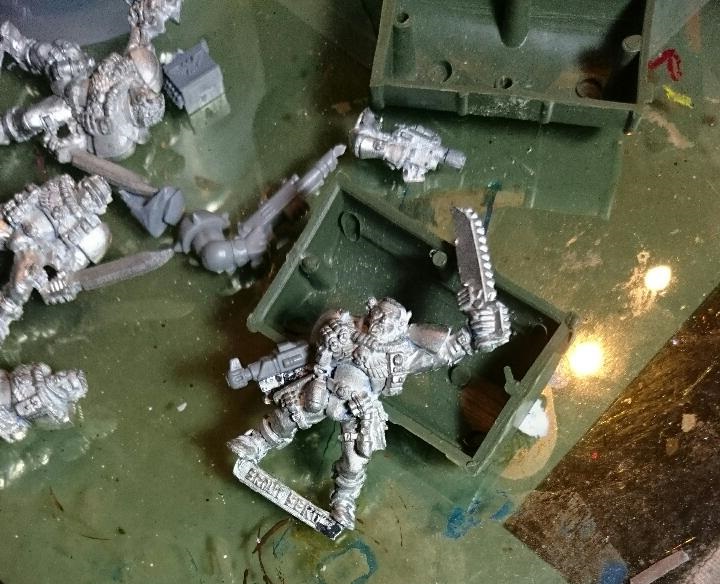 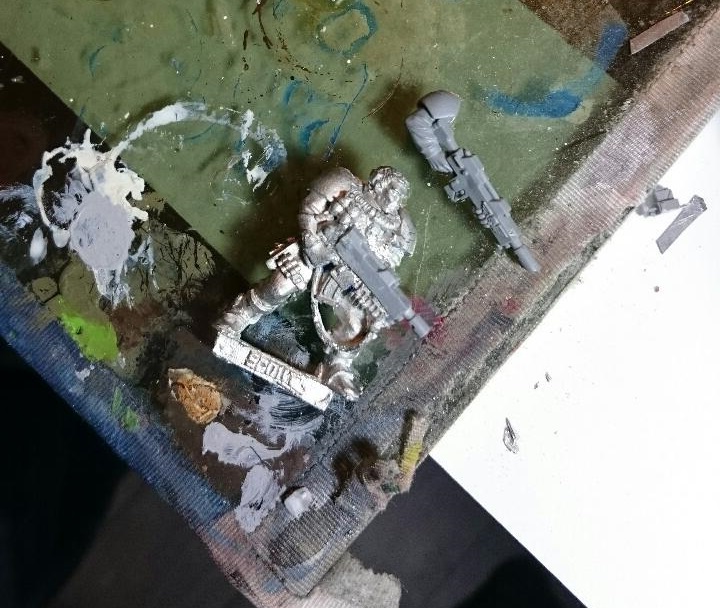 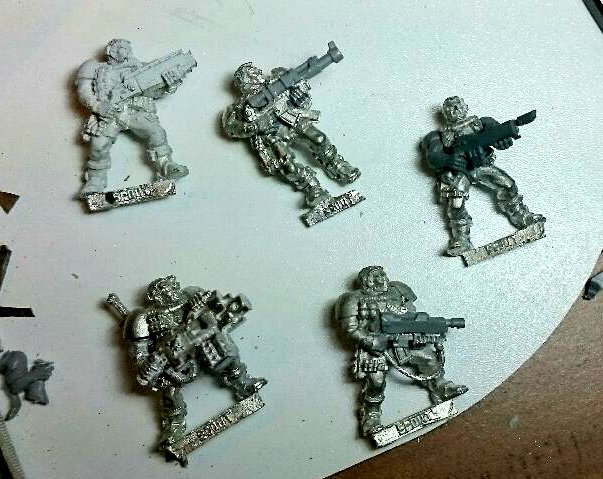 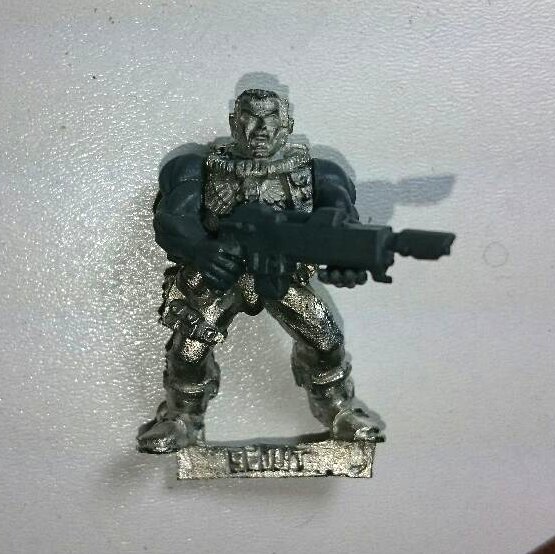 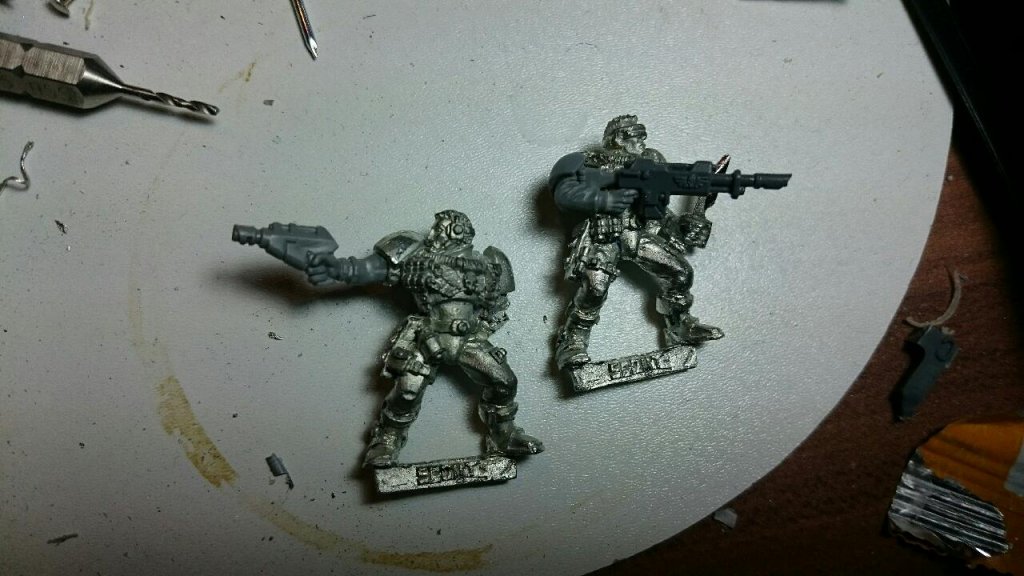 yesterday my son don't wanted to sleep, so this was my only evening- employment :-(

But i buyed some new minis on ebay.... now i need your help. what should i do with them? 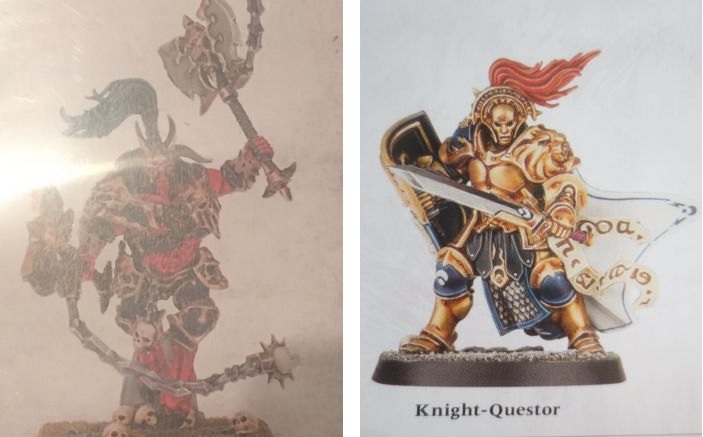 the knight-questor will be probably a good inquisitor ?
Reactions: CaptainDangerous

Also, I wouldn't worry about the aquila. Just say they repurposed some PDF or AM gear.

I think that's spot on xavier bacon, except that I'd probibly give him the bounty hunters load out, taking mesh armour as the extra. I know you already have two, but doing it this way means you know what weapons to model on him, he starts with decent stats and the special capture rule totally goes with a judges character. Also being able to play him with any law abiding gang is a big plus!
I can definatly imagine him with a space marine scout shotgun if you have one, and I wouldn't use the questor helmet as its abit too iconic....and oh...really loving the scouts! The effort of making the weapon swaps totally pays off! Will you be using them as van saar?
And the khorne guy is abit harder to call, especially with the cloven feet, maybe he could be a leader for a really corrupt group of Cawdor? Like they worship him as a reborn primarch or something?! He's a great model regardless, got tons of movement, can't wait to see what you go with!

hm a rly hard decision... i think i must wait for the delivery. when i hold the sprue in my hands and see the exact scale its easier to decide what to do. playing the converted "knight questor" as a bountyhunter is a very good idea. it goes with the enforcer-backround and the inquisitor-backround. i have no arbite or scout-shotgun for use but a lot of bits from my grey knights....

jeah and the khorne-daemon. puh ... i have absolutly no idea :-D
Reactions: CaptainDangerous

I've probably got a spare Scout shotgun, but posting to Bavaria might be trickier!
Reactions: Kommissar Shriken

For the boss' base, I would definitely avoid adding height, but detail is always good.
Reactions: Kommissar Shriken

@Xavier Bacon : oh many thanks, but no problem with the shotgun. if i make the arbitrator i will give him a powermaul and a shield
normaly bevore i start the conversion i place all the bits i want to use in front of the mini and hold every bit on it to look if i like it or not. so i will do this at this conversion to.

I'm actually fancy with this guy 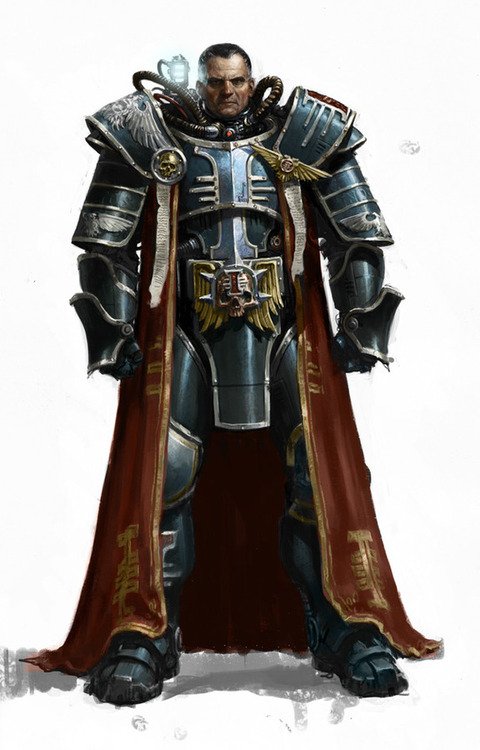 @sump dweller : thanks. yes this was really difficult to do. i worked hours with a sharp cutter and a metal-rasp. i think irasped and cutted more of my fingers than of the minis. :-D

Update:
i had a very short weekend but still i had a little bit time for my hobby.

because my digga-gang is ready for painting, but i havent enough time to do this, i worked on the new goliath-gang.

at first the finished goliath boss with a smaler base 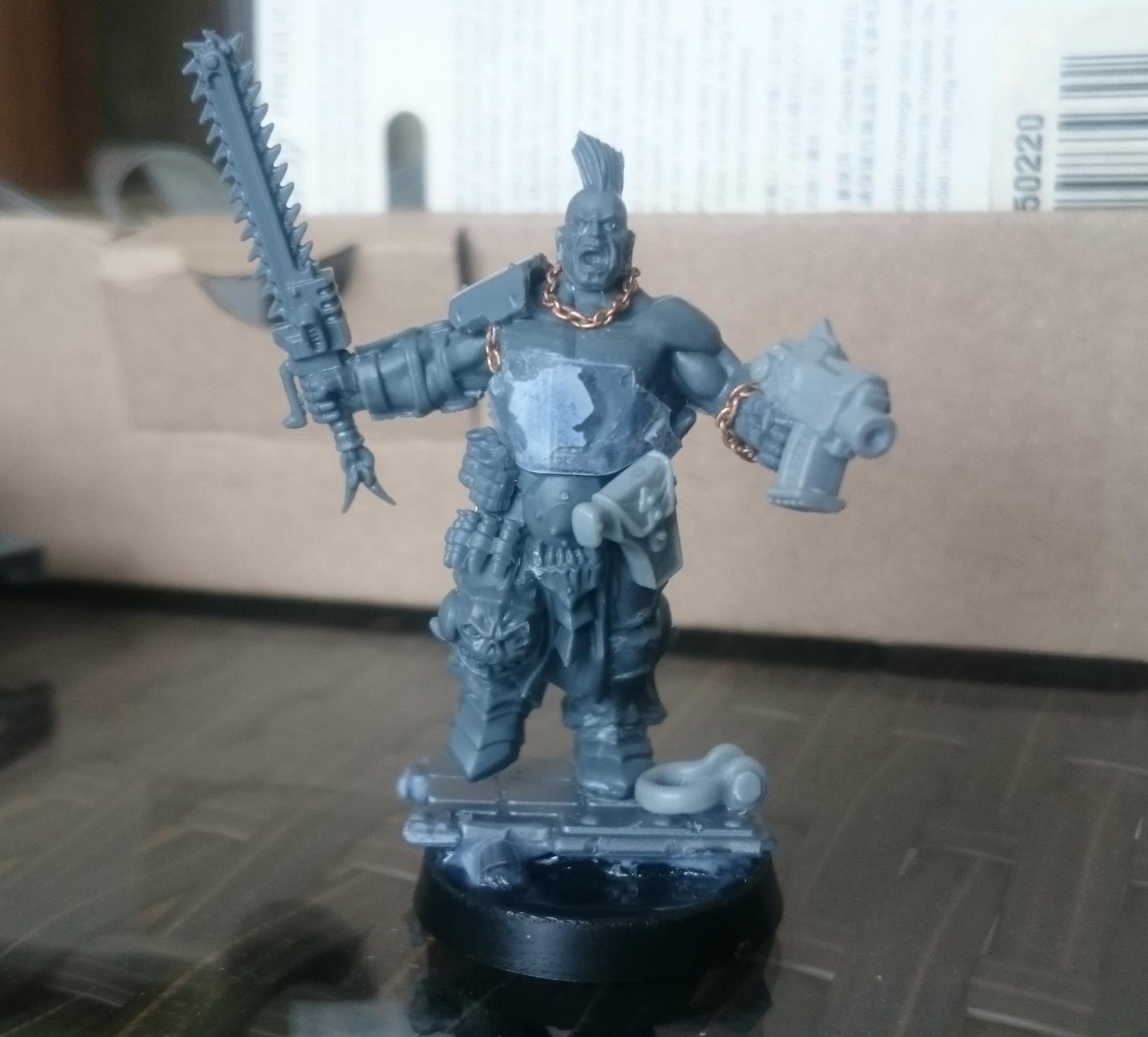 than a new heavy. his name is "arnold" you know why 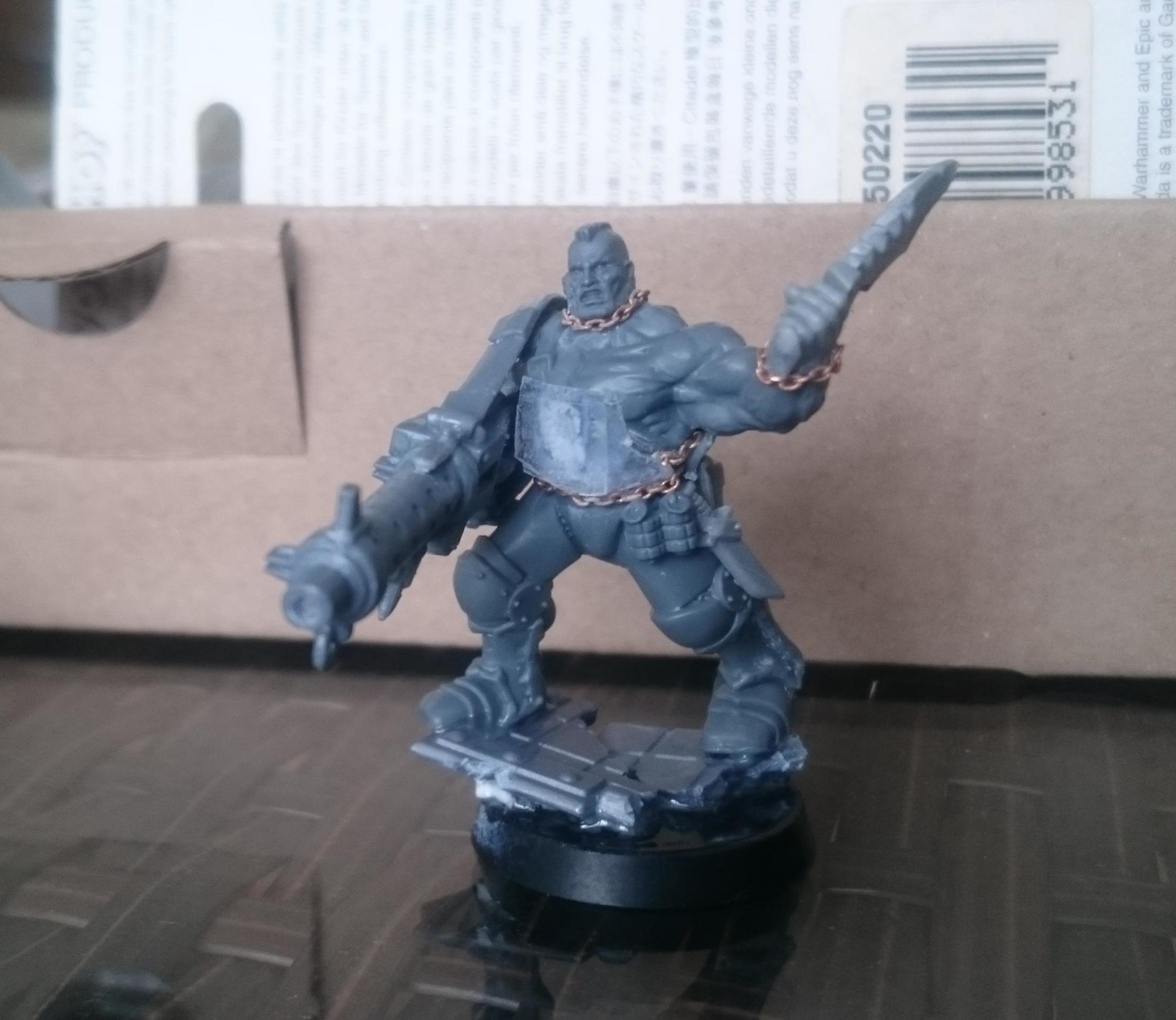 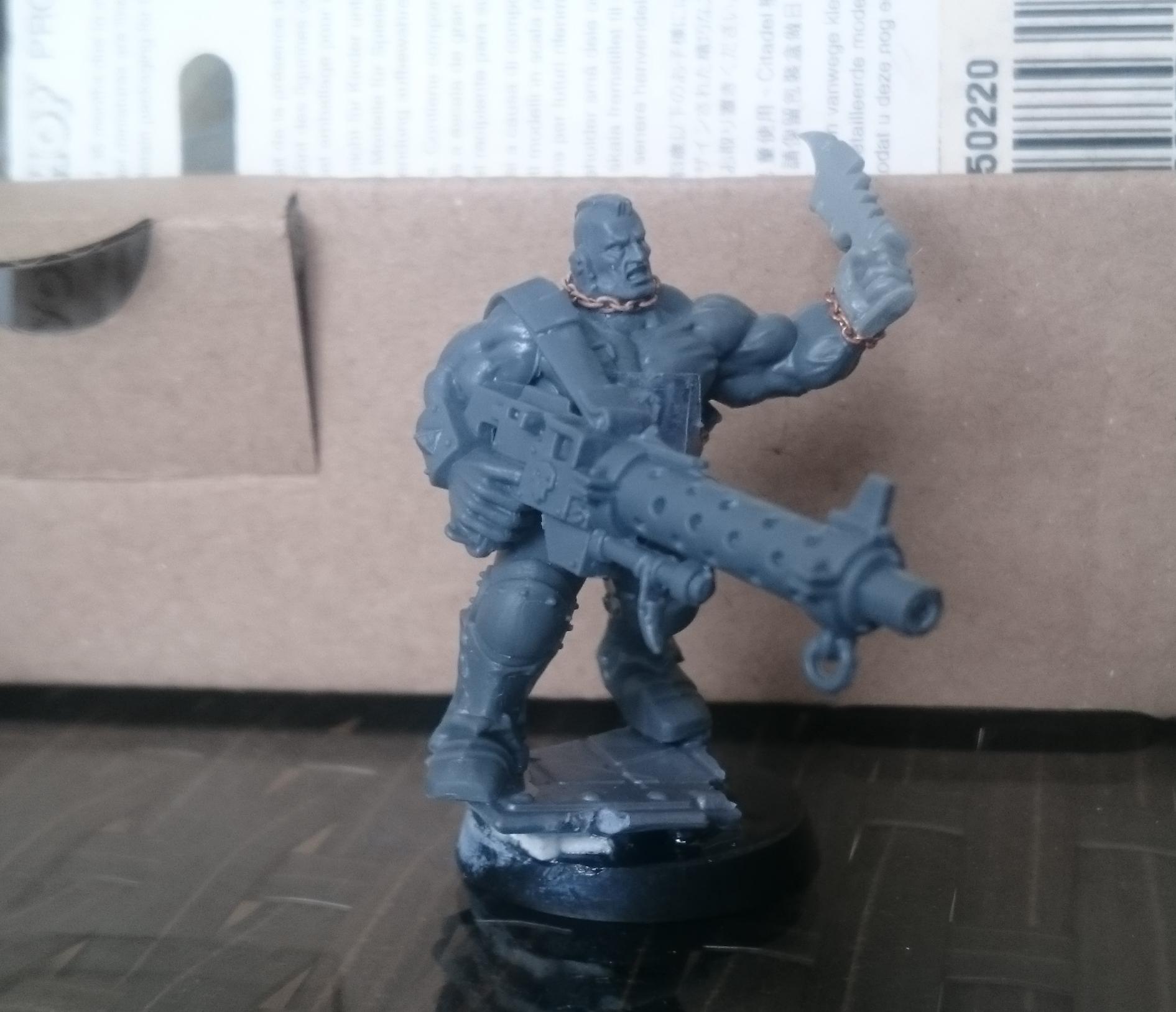 i also borrowed the idea from @Xavier Bacon with the dwarf -gang.... my implementation was.. not every goliath can be so big and strong. in the underhive between nuclear radiation and toxic chemicals thery are mutants "everywhere"...

i really like xavier bacons dwarflooking-gang and i wanted to have one dwarf in my goliath-gang to. because the other goliath are so big, he must be also bigger than others so i can't use the old gretchin- modells from the space orks. i used the new ork-legs and made the "pelvic bone" a little bit smaller to look more human-like. the torso is from the chaos marauders with catachan- arms and a head from the new bloodreavers.

so this is "tiny Pete" .. he is a goliath and he also want's to be strong.... i will give him some grenates and pocket's too. he gets his punk-hear probably today. i will make it with greenstuff. what do you think? 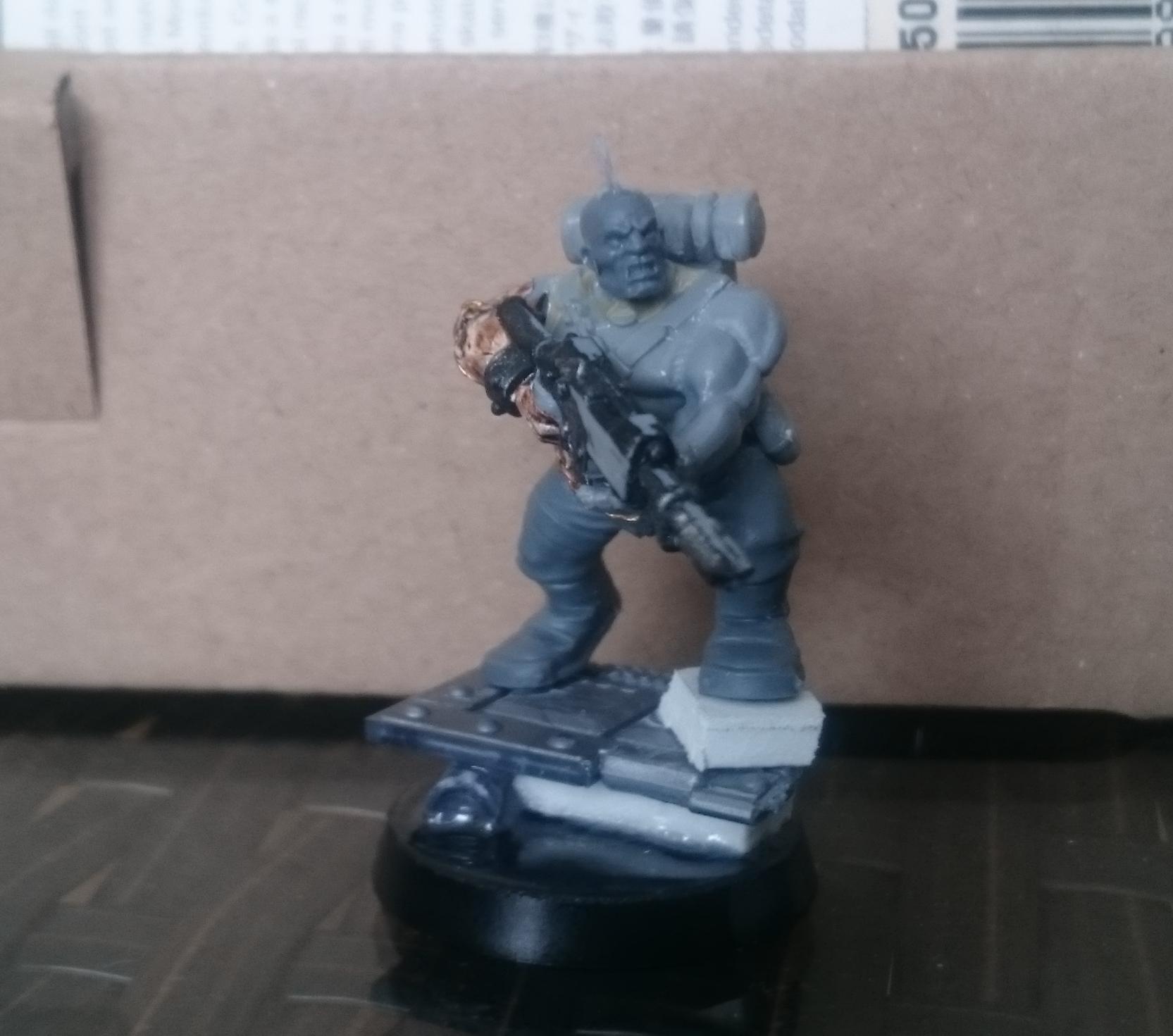 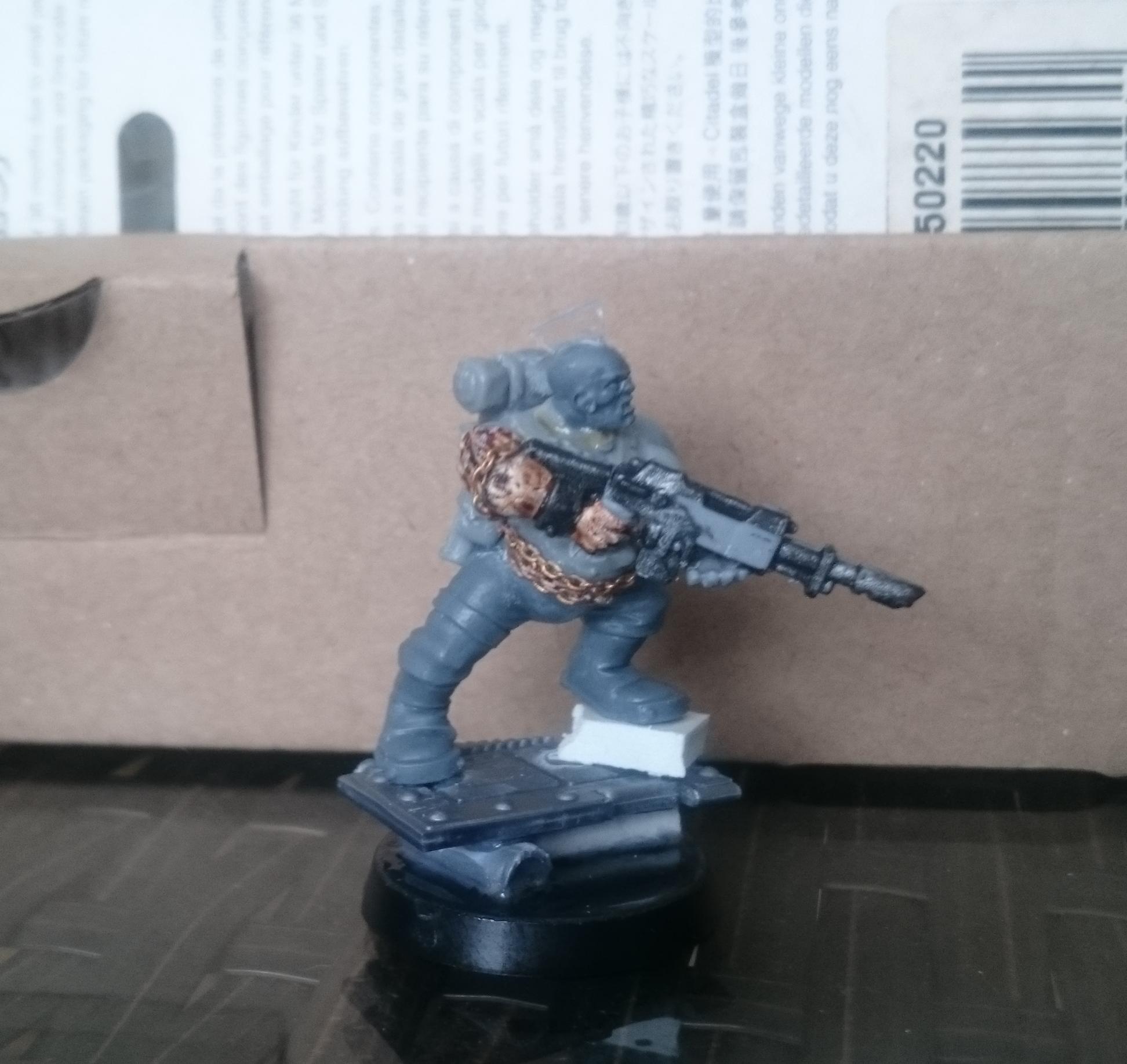 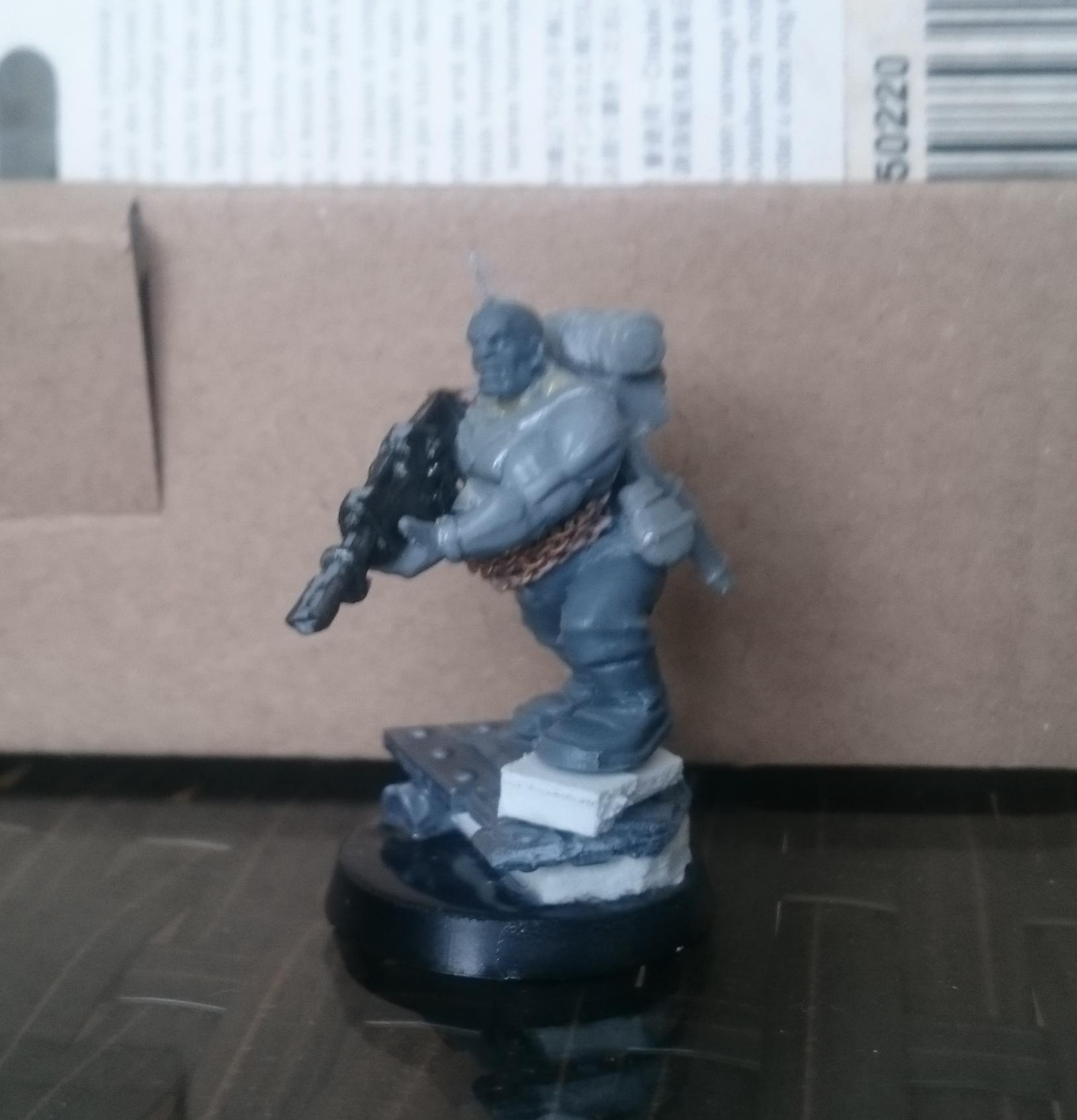 Great work on the Goliaths. The boss and 'Arnie' look good, but the little dude is excellent!

If you want to see other examples of the 'token little dude' in gangs, ask @KungFuPanda for a picture of his Goliath gang (he has a really short ganger.) I can't seem to find it at the moment though

many thanks sump dweller!

the gang from your link is awesome. the little goliaht-guy looks great and so cute ! hm i think i will make a secont "little goliath" now i have a new idea. many thanks for this ! awhh i love this forum!
Reactions: sump dweller, CaptainDangerous and KungFuPanda

Your work is kinda like my weekly dose of inspiration!
If you gave 'tiny pete' a beard, and hair that is the opposite to a Mohawk, then it could totally pass for me in real life!
And I really love 'Arnold'! That guy looks like he has muscles, on his muscles!! And firing a heavy stubber from the hip.....what a Goliath to behold! But the only thing I'm not sure about is his knife arm, when I first looked at him I thought he would look brilliant if he were feeding the gun, but it wouldn't be worth losing all that great detail, perhaps using the ball and chain (minus the ball) from the slaughter priest might suit the angle of his arm, or mebees turning the knife so he's holding it downwards might work!? Like he's about to stab someone in the neck! I also think you should make a juve to go with him, and model the juve with a massive backpack and ammoboxes to signify that Arnold could carry his own ammo if he wanted.....but he isn't going to!
Also like your reference photo for the judge! I just know you are going to ace it!
Reactions: sump dweller and Kommissar Shriken

hey captain! many thanks! i'm proud of it, that my conversions are a inspiration for you!

jeah the Knife-Arm from Arni is a little problem.... the khorne-wrathmongers all have arm-poses to "swirl" with the chain- hammers.
so the arm is static upwards. if i replace the arm - the muscle-fibre from the new arm does not compair to the muscles from the torso (sorry for my bad english, but i think you know what i mean ) so i had to give him somethink to hold it in the "air" ... should i give him another weapon?
probably some chains or like you said the ball from the slaughterpriest?

but the Juve with the Ammo-Box is a brilliant idea! thanks for it! coming soon!
Reactions: sump dweller and CaptainDangerous

Your English is great!! It's my bad explaining that's the problem!
I hope I'm not to late but the arm is good, it's the hand I meant! I think if you either turn the knife around so that he is holding it with the blade at the bottom of his hand like how the special forces use them, or if you used the hand and chain from the slaughter priest (don't use the ball).
Pleased you like my juve idea!
Reactions: sump dweller and Kommissar Shriken

hello captain! ah ok i will try it with the slaughterpriest-hand and the chain. i like your idea. thanks for it!
Reactions: CaptainDangerous

sump dweller said:
Then there is this example
http://spikyratpack.blogspot.ie/2013/08/confrontation-40000-wasps.html
Click to expand...

Kommissar Shriken said:
the gang from your link is awesome
Click to expand...

It sure is - that guy's work is inspirational. That was the picture that made me want to make the 'little dude' for my old style Brat gang.

By the way, I don't see a problem with Arnie's knife arm - it just looks like he is about to slash at someone standing in front of him in the general direction that he is looking.
Last edited: Jan 17, 2017
Reactions: Scavvierising, Llewy, CaptainDangerous and 1 other person

It's not the arm per se, it's just I feel the way the blade is facing draws your eye toward that point, as in, that's where all the movement and focus is. I think with either the blade facing inward or his hand doing something less dramatic, the models focal point would be more toward the centre of the model. And it's just what I would change, I think if my Goliaths challenged his to an arm wrestling competition he would just win by mercy!
Reactions: Kommissar Shriken and sump dweller
Show hidden low quality content
You must log in or register to reply here.
Share:
Link
Top Bottom