Currently trying to build my slave ogryn box, and I don't like to do that without a gang in mind.

I want to use at least one Stupid Welder, even if just because it looks awesome on the model. Current thinking was as follows:

It uses 6 models, which is *totally coincidentally* the number of Slave Ogryns in the Ogryn box set.

I've got some spare Nobz arms with Choppas (and one with a Circular Saw, hence the Heavy Rock Saw), which is how I plan to make up the "missing" arms.

Just one word on that - having spent some time with the Ogryn box, the lack of "normal" arms is a bit of a problem for using the sprues for a whole gang (even one with only six models). There's only one "bare" left arm (holding the spud jacker) and NO bare right arms - so you're limited to making one-armed Ogryns (which I don't like - hate having maimed / bionics at the beginning of a campaign), or using the augmetic fists / power fists as "bare" hands - not great from a WYSIWYG perspective. And yes, I have spare Nobz arms, but not an unlimited number...
Reactions: BearsWillEatYou and alexcragg

First, that is a pretty good looking list in my opinion. Six bodies is a good start and you have some of the best equipment in my opinion (arc welder and rock saw). The augmented fist champ is appealing for the weight of attacks. I assume you plan on buying armor and grenades ASAP ?

What skills are you thinking of taking?

If you are really dedicated to the storm welderI think you are better served by putting it on the Ogryn with the spudjacker, and give the spudjacker to the lobo. The e 6+BS skill makes it basically a suicide device. On the regular ogryn you have a marginally better chance to hit, and can get up to 4+ in short range.

The slave ogryn kit is frustrating due to it's lack of options. I picked up the Guard Bullygrun box and it adds 3 bodies (for growth and variety), four suits of carapace armor that can be fit on the slave ogryn models, and a ton of arms (three great left arms with mauls). I did a lot of basic swaps and have been very pleased with the results:

Picked up a box of the slave ogryn gang and the guard ogryn box. The slave ogryn are great models but depressingly limited out the box... stupid spud jacker anyways, I messed around and made my leader. The 40K box is great as you have arm options and 4 suits of carapace armor

One option you have is to use the right augmetic fist arm, but remove the actual fist part and replace it with something else. It's pretty easy to do and I've built one ogryn with a simple Ork choppa stuck on as a brute cleaver.

It creates a bit of a pit fighter vibe as long as you're ok with that!
Reactions: Malevolent Pink Cat
M

Thanks both, helpful suggestions on modelling.

On the list - grenades and armour definitely the next buys. Good point re: the storm welder - had missed that the Lobo Ogryn has 6+ BS. I really want to include one, because I just love how the model looks, but the more I think about it, the more I can't see why it's in the Ogryn list at all - they don't have the BS to make it work, they're all multi-wound models but a misfire on the Storm Welder ignores, and it makes an already expensive (admittedly, good for price) base ganger member even more expensive. I'll still include it (because model), but it is super difficult to justify.

Alex - glad to have your input - I'd seen someone else's (your?) 9 body initial list on this forum, so good to have some feedback e: 6 models!
Last edited: Sep 16, 2020
Reactions: alexcragg and BearsWillEatYou

I saw that list as well (not mine) and it's not without merit. I personally think it's really important to get a few of the augmented weapons in your list early, otherwise you are banking on adding them during the campaign and that can be rough, needing to save up 200+ credits to add a champ with a good weapon. But flooding the field with ogryn does seem like a viable tactic, I prefer having some units I can rely on to excel and not risk getting bogged down in slow resource accumulation.

I am looking at doing six models at the start.

Not sure of the skills for the champs yet and the point gaps will be filled with armor and grenades. I plan on leaning heavily on the leader early campaign as he shuold be nigh unkillable (until everyone starts loading up on melta guns). The lobos are pretty reliable in CC with the Brute cleaver (hit on 3's wound most models on 3's) so they are a legit threat to regular gangers.

Slave Ogryn are (by design I believe) a very limited gang and will run into lots of hard counters (CGC, Toxin, Melta) but dang they just seem fun to play!
Reactions: Malevolent Pink Cat
M

... Strikes me that leader is going to take a LOT of fire. He's so scary that if I saw him bearing down on me, I'd be emptying everything I had at him (although probably to little effect).

Interesting that we've ended up with similar lists (although maybe not surprising given the lack of options). How are you planning on modelling the Rock Saw?
Reactions: alexcragg 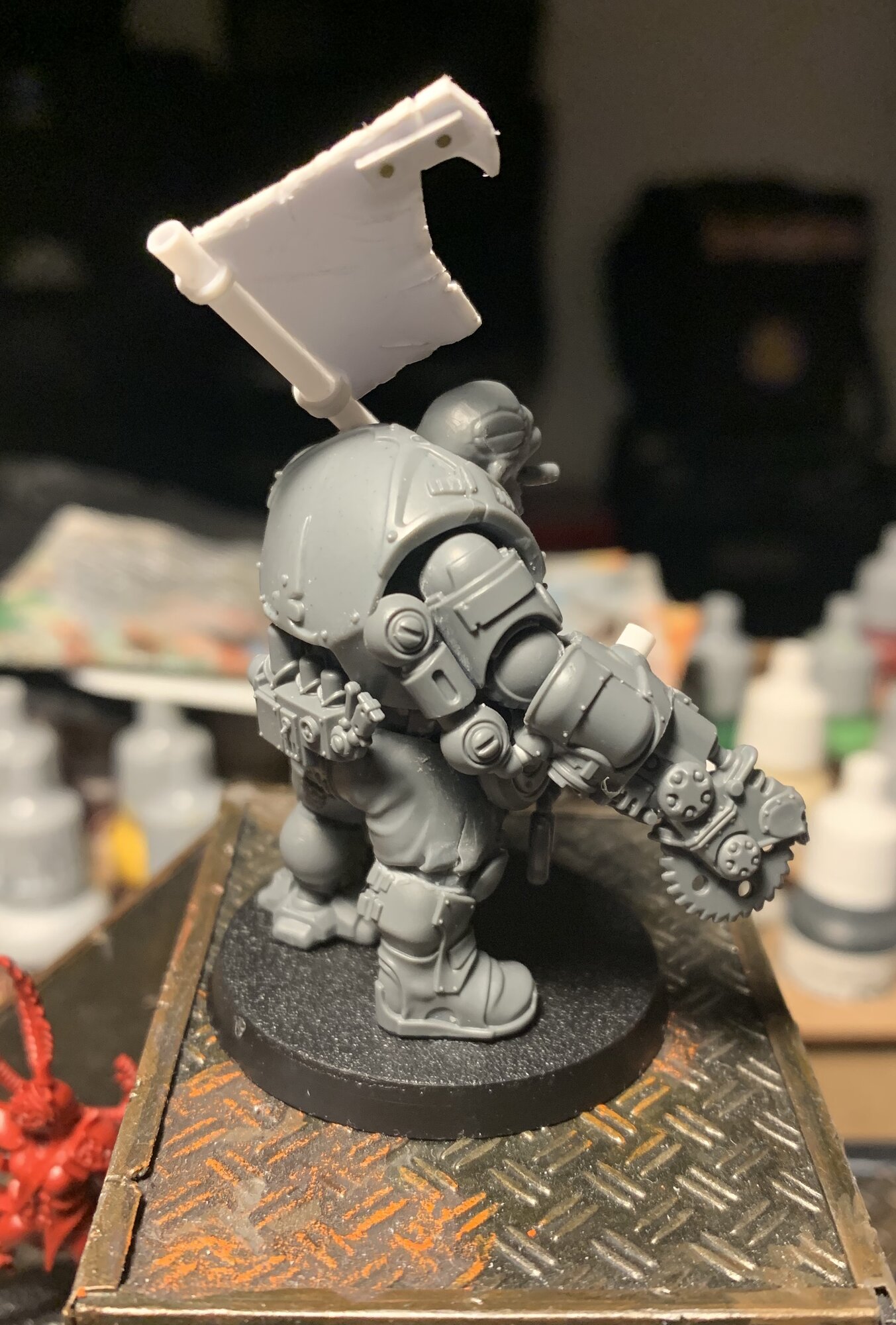 I used an augmented fist arm and added a rock saw from a Goliath forge born.

Yeah list similarity is probably a result of the restricted option. But great minds think alike and all that
Reactions: Covenant, Roughneck91 and Malevolent Pink Cat

And I assume the leader is going to be a fire magnet, and early campaign he should be able to tank most of it. Especially with the ‘walk it off’ skill letting him heal as he plows forward.

I think one of my first goals will to be buying Falsehoods for my leader and champs. 40 points to be immune for attacks turn one and two will really help getting into position
Reactions: Malevolent Pink Cat
M

In a world where Lobo slaves exist, why would you ever want to have regular Slave ogryns? The ability to ignore pinning is just too powerful to pass up, especially for an all out melee gang.
Reactions: Sundown Dreamer and BearsWillEatYou
M

Ok that's a pretty awesome-looking conversion, although I was planning on using both the rocksaws in the Goliath pack for the Prospects.


MrAndersson said:
In a world where Lobo slaves exist, why would you ever want to have regular Slave ogryns? The ability to ignore pinning is just too powerful to pass up, especially for an all out melee gang.
Click to expand...

Purely, PURELY because I don't really like the idea of Lobo slaves. The poor Ogryns are brainless enough already - did you really need to take out more of its brains? After a certain point, this gang is more an RP gang than anything.

By the way, am I right in thinking that Ogryns CAN buy heavy ranged weapons from the trading post after the first game, or am I overlooking some rule that says that they can't?

MrAndersson said:
In a world where Lobo slaves exist, why would you ever want to have regular Slave ogryns? The ability to ignore pinning is just too powerful to pass up, especially for an all out melee gang.
Click to expand...

Variety. Move 5" vs 4" is a huge advantage in my opinion, or I am just biased from playing Goliath. The extra BS is nice for a bit more reliability on grenades.
On paper I agree that the Lobo is better due to their immunity to pinning and cost, but I feel if you field all lobos and characters it will just funnel target priority to the character.
Reactions: Malevolent Pink Cat

I would give the Storm Welder Ogryn on of the weapons from the Lobo so he has something to do other than feel compelled to commit suicide.

I think it's a good build relying mostly on the bitz available in the slave ogryn kit.
Reactions: Malevolent Pink Cat, BearsWillEatYou and Vonvilkee

I’m pretty sure that Ogryns are limited to using whatever weapons are on their house weapon list.

I’m also pretty sure that house weapon list doesn’t include a heavy rock saw, but I may be wrong.

They get the Rock Cutter and Rock Saw as augmetic weapons options on every fighter.

My list, that Strenght 5 it's too cool to throw grenades

BearsWillEatYou said:
They get the Rock Cutter and Rock Saw as augmetic weapons options on every fighter.
Click to expand...

Just double checked and you’re 100% correct, though they are almost double the cost of a lascutter for a very similar profile.

I might still have to borrow some arms from my centurions though.
Reactions: BearsWillEatYou

I like the hazard suit on the lobos, it makes them immune to quite a lot of effects

What made you give Naaarrrgghhh! to a champion? I struggle to see the utility of that skill

alexcragg said:
I like the hazard suit on the lobos, it makes them immune to quite a lot of effects

What made you give Naaarrrgghhh! to a champion? I struggle to see the utility of that skill
Click to expand...

Everyone seems to rave about it because it gives you an extra action in one turn, but to be honestly struggled to see how to actually use it with that third action until I looked at versatile weapons.

With the Las cutter he is able to double move next to someone and then fight them with the 2” versatile weapon before being pinned and hopefully being unable to be targeted by enemy shooters.

He can then stand up and attack if someone is still next to him in the next turn.

Still to be honest I’m not sure it’s a good skill. Iron man and Walk it Off both look a lot stronger to me than any of the other skills on the list.
Reactions: alexcragg, BearsWillEatYou and TopsyKretts

Yeah, that about a sums up mynthoughts

If you can get access to the combat skill that makes attacks a simple action and you can fight three times it seems good. Otherwise I feel like it’s a silly way to move three times in a turn, then deal with the after affects

Walk it off seems really good on ogryn early campaign

If you can get access to the combat skill that makes attacks a simple action and you can fight three times it seems good. Otherwise I feel like it’s a silly way to move three times in a turn, then deal with the after affects

Walk it off seems really good on ogryn early campaign
Click to expand...

I think Iron Man is probably my favourite skill in the tree as it helps to stop an ogryn from being slowly whittled down by flesh wounds, though walk it off is a close second.

Fists of Steel has a niche spot if you want to take an unarmed ogryn champion running around with grenades (and possibly a storm welder), but will run out of oomph later in the campaign when people start armouring up.

Naargah ends up being the default third place skill simply because it has some utility and the other two skills (Immovable Stance and Unleash the Beast) are complete garbage.
Reactions: alexcragg
Show hidden low quality content
You must log in or register to reply here.