Been knocking this one about in my head. I know Imperial Fists occasional go for a stroll through the underhive to look for recruits and generally kill folk (everyone needs a hobby) is there a scenario for this?

I mean could it be one marine against a gang? Lorewise this is meant to be utterly one sided. I mean isn't it ten can more or less do over an entire hive? I dunno I thought I head that...

Anyhoo. Then I thought what about without armour and in cognetio. Might be bored and fancied a challenge or this might be how they recruit (I'm ignoring the Space Marine book completely here, it was toss)

Then I thought what about a marine finding a gang battle and the scenario was which gang could escape first. The marine would just stroll through and try to kill the nearest ganger.

Yeah I just wondered what everyone thought. 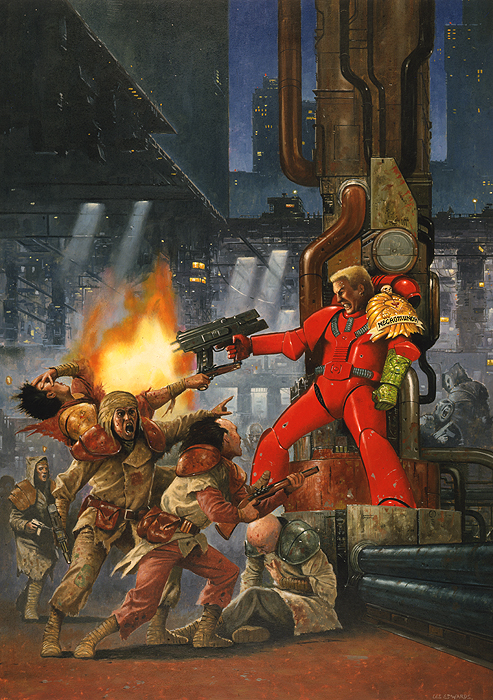 I’ve seen a few iterations of this idea but can’t find any to actually link to.

You could use Murder Cyborg or Monster Hunt as the basis for something like this and just replace the titular character with a space marine.

The fluff though is all over the place about how good/effective space marines actually are compared to a regular human. In some instances a squad of ten marines can pacify a whole planet and in others it takes three legions of space marines to take a single city.

The crunch (rules) is also all over the place on how good they actually are as well. In 40K proper they are marginally tougher than a standard human but in Necromunda people love to buff them up to godlike levels. A melta gun should kill them in one shot in both versions of the game but often doesn’t in people’s headcannon of Necromunda.

If you do go down the Space Marine route I would suggest rather than making them S10, T10, W10 monsters that you instead make them S4,T4, W2 fighter with a 3+ save, 2 bio-boosters, respirator, photo goggles, infrasighted boltgun, immune to break tests, immune to pinning, ALL the Brawn, combat, ferocity and shooting skills plus some of the Muscle skills like walk it off and iron man. I would also add in a rule that he can’t be seriously injured and treats those rolls as flesh wounds.

Essentially what you then end up with is a fighter that always has a toughness of 4 and a 3+ save that recovers flesh wounds each turn and can rip people apart on the charge, survive a charge from a good combat fighter, and shoot nearly anyone on the board. Arm him with a master crafted boltgun, master crafted bolt pistol and master crafted chain sword.
Reactions: Casual Tea

Personally think leave the stats as 40K stats but give (any imported military figure) a free re-roll to represent the military training etc... That free reroll can per tweaked from perpetual/once per round/activation etc.. to suit the level You're after. The beauty of this approach is it can then be used to import any 40K figure. And any 2 imported figures should then maintain Relative power levels ( or even lose rerolls if facing off).

Plus, through in a bunch of what @almic said about equipment...
Reactions: almic85

I think a marine would not fight head-on with a gang that has access to things like melta or heavy bolter. I think a marine should act like monster in scavenge - he attacks fighters who are out of position, and you never get to shoot him.
Reactions: Space Truckin and Crazy Ivan

Isn’t that space marine dude Djangar gun fists or someone like that? I’m sure I recall this theory being confirmed by official channels somewhere…
D

I've been working on it myself, just for my own amusment.

I don't think Necromunda stats port over directly to 40K. It's quite possible to get a Goliath with S7, T7, 5W with Genesmithing and Advancements, and I don't think experienced Space Marines, especially in their power armor, would be much inferior to that (I know some Goliath are reputedly bigger than Space Marines, but I don't know that means stronger--or just bulkier). I don't think they would have WS inferior to some of the best Eschers (and the same with their Attack characteristic), nor would they have a BS a lot lower than the best Van Saar.

It depends on the 'reality' you want in your game, of course, but I wanted a 'cinematic' Astartes, who was far superior to the Underhivers, and could reasonably threaten even an experienced, gunned up gang (but would still run a good risk of dying from a meltagun to the face). I basically figured out what the best stats they could achieve were, and gave him those. I also gave him any skills, from any lists, that I thought were appropriate, as well as any wargear that I thought was appropriate (though some 'skills' were actually wargear for him, and some 'wargear' were actually innate abilities in an Astartes. These guys are trained for decades, so any number of skills doesn't seem implausible to me.

It made an absolute beast, that was terrifying in combat, but not someone that could not be taken out of action by a sufficiently grievous injury (but was almost impossible to whittle down with little attacks or sneaky gas/toxin injury rolls).

Space Marines? When it comes to galivanting about the Underhive, they are kind of above the fray. Maybe if they had a Genestealer Primarch cornered, or a Chaos Lord. Otherwise they'd probably leave the filthy and foul Underhive to their "Juves." Space Marine Scouts! Those would have compatible stats and Skills, and reasonable armor and weapons.

For the record, I am NOT promoting 40K in Necromunda. Perish the thought!

if interested I summarised his skills on the "Gang Notes" tab. in addition, the model I based this on is the Indomitus Captain with the shield.

IIRC, the old Necromunda had rules for marines (Shadow War Armageddon certainly did)

D
What would be the appropriate statline for Standard 40k and Necromunda?