I tried 98.3 Superfly, Kronehit FM, Energy, Radio Jugoton, Radio Seniorkom (which was dead air), and I think a couple others.

I didn’t realize how tiny Austria is. It seemed like I’d move the selector just a bit and I’d be in different countries.

Punktaku said:
I tried 98.3 Superfly, Kronehit FM, Energy, Radio Jugoton, Radio Seniorkom (which was dead air), and I think a couple others.

I didn’t realize how tiny Austria is. It seemed like I’d move the selector just a bit and I’d be in different countries.
Click to expand...

"The population of New York City in an area the size of Maine" is a good metric I used when explaining my country in the States. Except Maine isn't mostly covered by mountains, but it gets the idea across. But if you think we are small, check out Switzerland, they're nothing but mountains, smaller but have roughly the same population. I wonder where they're all hiding...
E

SuboptimusPrime said:
So with the Orc done, I can finally get around to doing the conversion of my Van Saar leader, which is not the product of a dream, but rather the product of insomnia last weekend. I wanted to use the leftover Necron space wizard arm as a bit of Archeotech he found in the wilds, but the hand was way too chunky for a human. So what to do? Servoarm time. Directly touching strange artifacts is bad luck anyway. So I'm using the Archeotek as a base because he comes with weird kit and a rig welded to his back already. 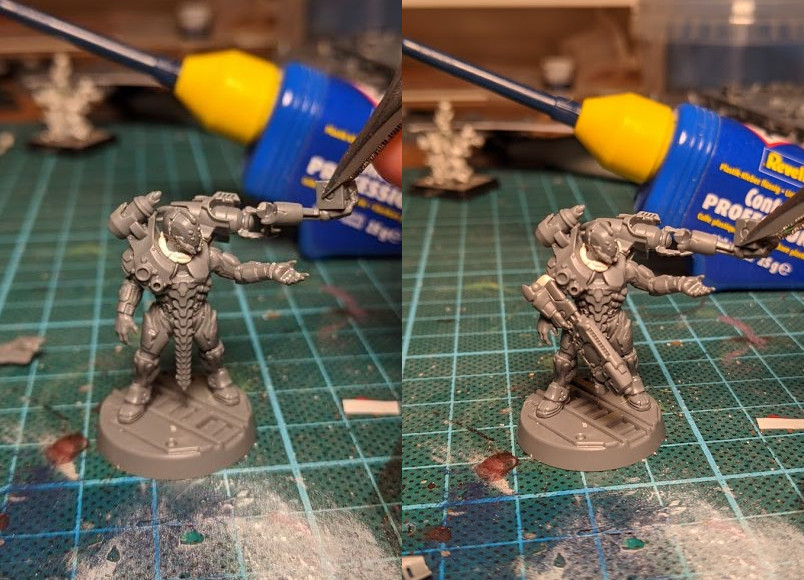 The original plan was how it's on the right, with the gun cradled in his right arm, and the left directing the servoarm with the eerie alien cube. But I am at the stage where I have to remove the original right arm, and since I kind of dig his "I am a generous god" pose, I hesitated. So now I'm mulling over whether I might want to add the plasma gun via a second servo arm or something, or if I'll stick with the original idea and replace his arm.

I'm gonna contradict everyone and promote the gun pose @SuboptimusPrime !

I really like the sci fi utilitarian weirdness of having 4x arms with the servos carrying the heavy or mysterious and ultimately dangerous paraphernalia of his occupation.

To me he feels more deadly and has a more dangerous presence because he is packing a big gun too.

Finally, maybe the subjective reason why I like it, is because it reminds me the Corvus Belli Infinity range TAGS Armoured suits - I just love those models!

Either way - he looks awesome dude so go with your gut 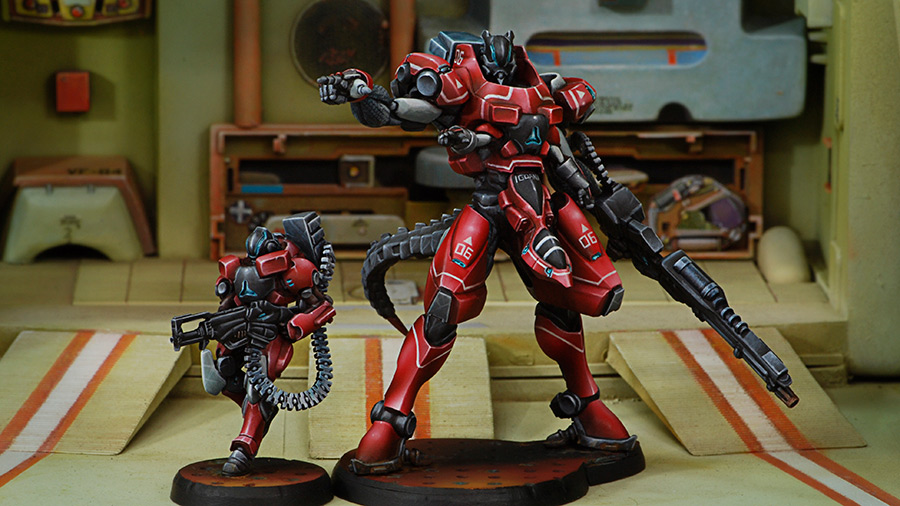 "Generous god" is winning for me. If the shape of the rig allows for it, I'd put the plasma gun stowed on his back out of sight, possibly on its own servo-arm, so as to keep what is a really cool silhouette.

Otherwise, maybe stand it loose in front of him on a spindly tripod around waist height as though it's almost autonomous, or on a chest harness. Both of these would require a new stock though unless you can cut the arm away pretty easily.
Reactions: Malevolent Pink Cat and Edster
M

If you’re really committed to plasma gun, you could try having it in his hand in the same pose as the right hand armoured suit from edster’s post - that way it doesn’t obscure the model, and shouldn’t have such a big effect on the lines. I personally think having the gun passing in front of his body would detract from the model, however.
Reactions: Edster

This spun out of control a bit, but this project has devolved into a series of scenarios testing my tendency for executive dysfunction and choice paralysis.

But I eventually (after much tortorous internal debate) decided to go with the gun option, the one where i remove the arm specifically. I did make a plasma gun bit with another Necron arm for the other side to really emulate the TAG unit, but that looked liked it offered about 50% less firing arc than having the gun in his hand, and also weirdly lopsided. I also tried to orient the gun downwards, but then the muzzle was almost on the floor. And while I do not remember much from my very short time in the army, I do remember what the armory seargent said he'd do to us if he ever caught us resting our rifles on the muzzle brake, so I imagine doing that with a highly unstable plasma launcher is also a bad idea. 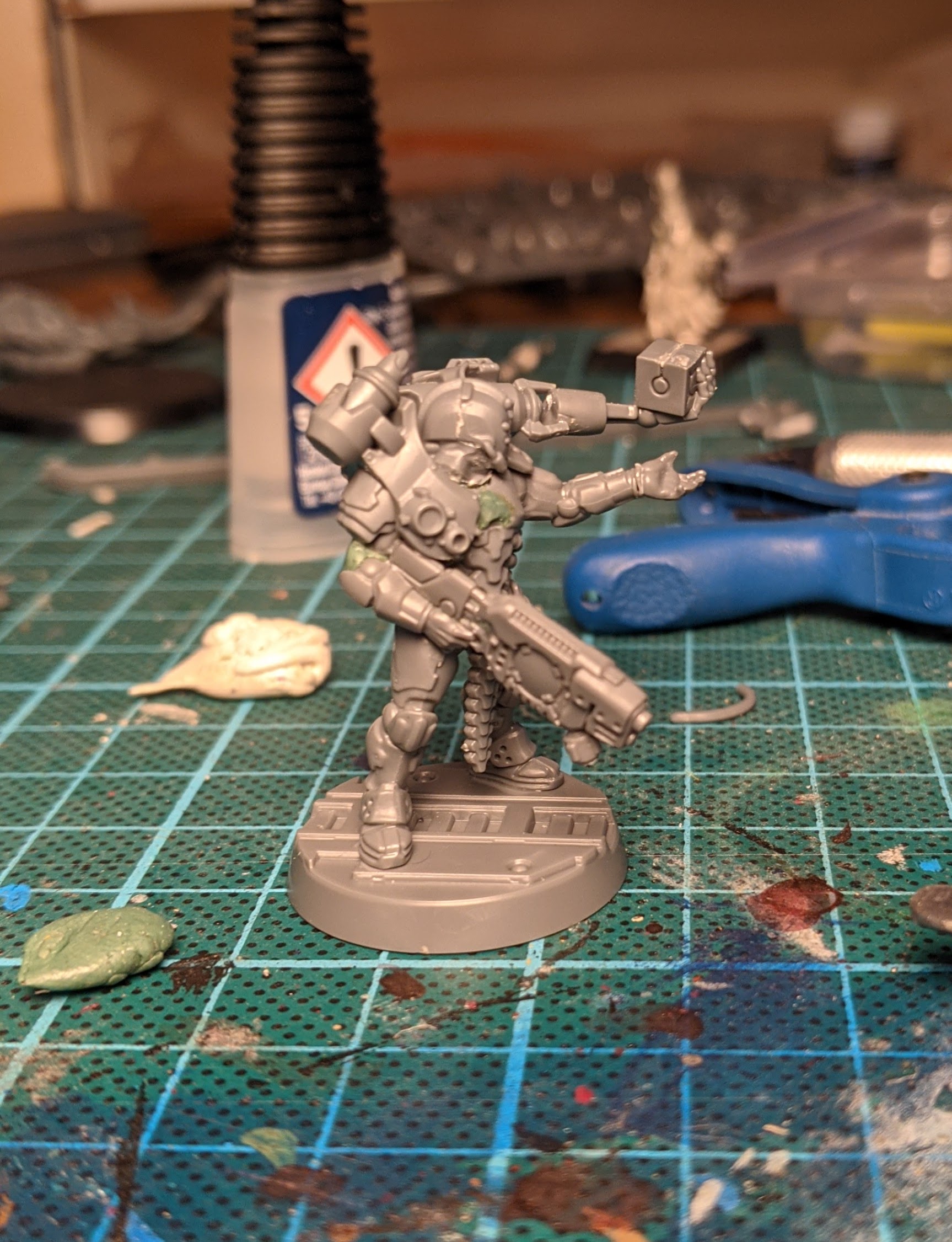 So he looks like this now. The fact that it changed the model's silhouette is actually a plus for me, as I plan to build a regular Archeotek as well, and they'd look very alike otherwise. Also interesting, the necron arm bit slotted into the socket for the rad-beam weapon without problem, and stuck there with tension alone, making it a super easy gluejob. Almost like it always belonged there...hm...
Reactions: Mutant Modifier, radulykan, Schank23 and 8 others

That looks great, excellent idea for the leader. Can’t wait to see him painted. 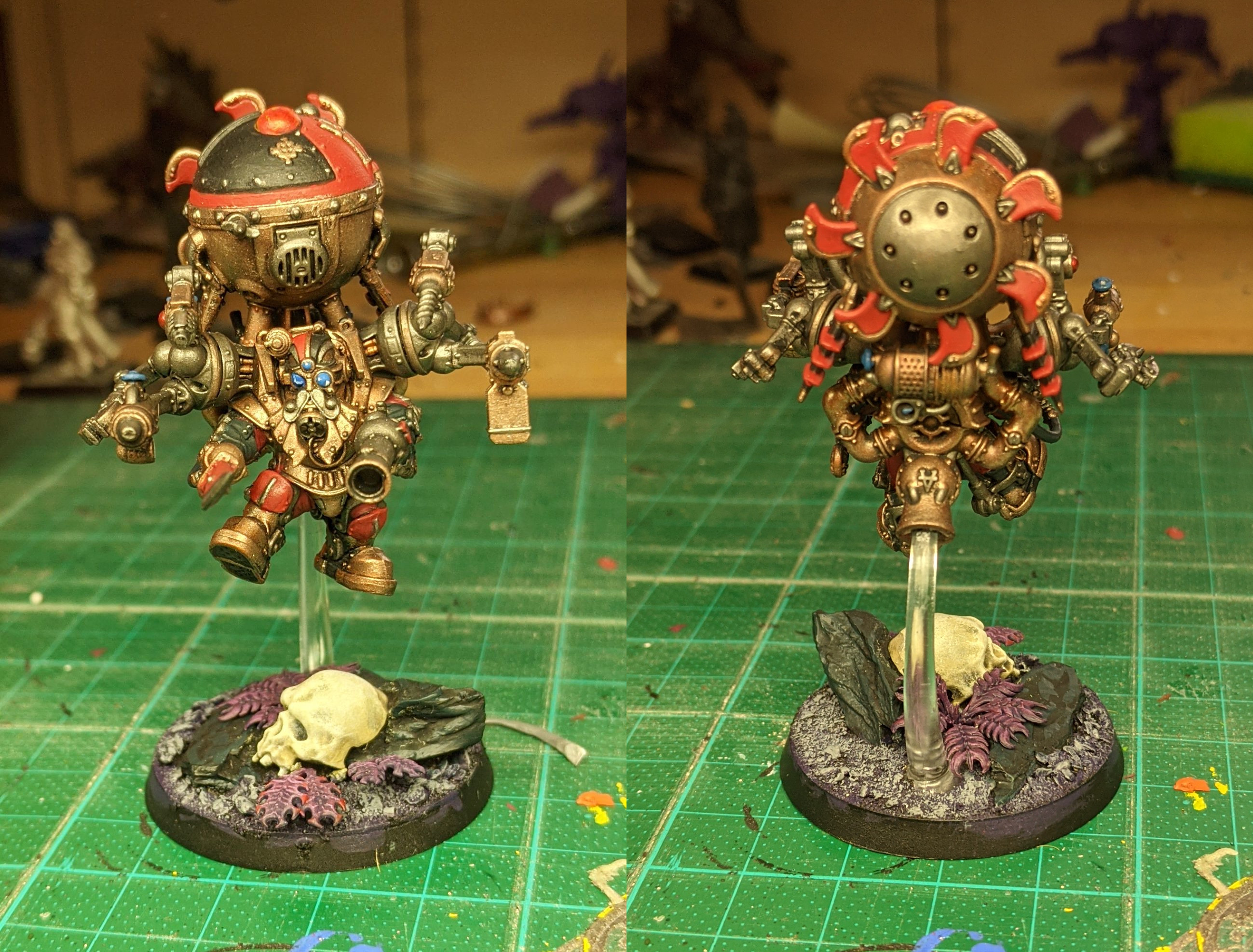 Now if I can get paint on his...oh Omnissiah, 18 buddies, I'll have all my Endrineers painted. Oh, and I have two unpainted Endrinmasters on foot as well, so it's 20 buddies. This is why I always have at least a few Kharadrons on my table.
Reactions: Loriel, Mutant Modifier, Schank23 and 3 others

TL;DR I need ideas for a chapter symbol for my Marines, and you can help! 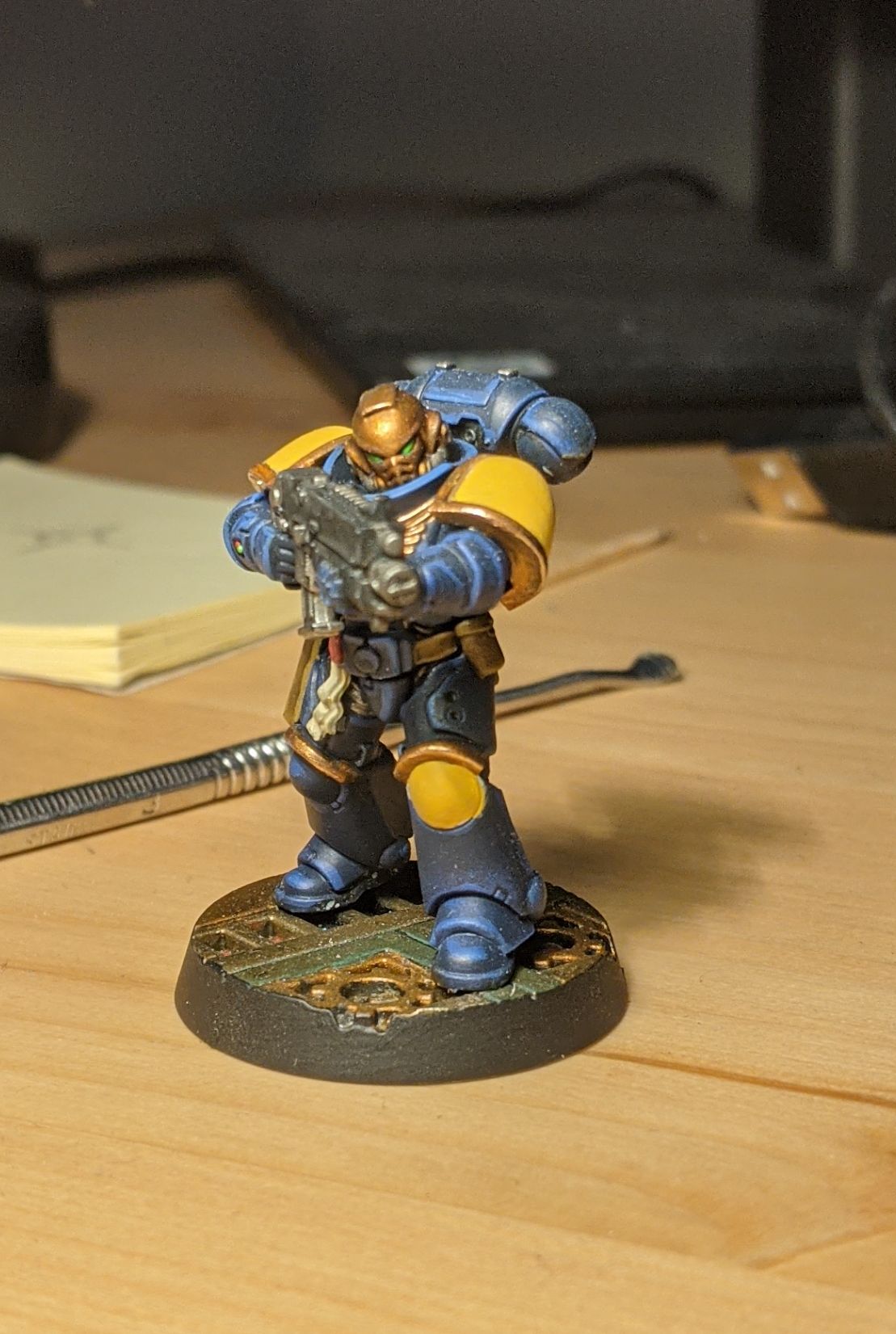 This dude was a member of the Void Tridents, until I discovered three things: 1.) White is a super hateful color to paint, even in patches. 2.) Their company symbol is harder to paint than I thought and transfers for the standard roles in red are almost impossible to get for some reason 3.) Most importantly, they're an all-Primaris chapter according to their fluff, and I have a ton of regular OldMarines I want to fold into one superchapter, so that's a no-go.

But I liked the whole "blue armor and bright shoulderpads" thing, so I invented my own chapter, the Knights Solar. Don't worry, I won't bore you with the fluff, let's just say their thing is that they worship stars as gifts of the Emperor's will, so they love kicking the asses of things that damage stars (*cough* Necrons *cough*) and have an unhealthy obsession with plasma weaponry (That's me. I have an unhealthy obsession with plasma guns in any scifi setting). And their home world of Parallax is orbiting Proxima Centauri. Because for some reason, that system is almost completely unoccupied in the 40k lore I found, go figure.

What they don't have yet is a chapter symbol. Can't think of one, kinda stumped. Any ideas, oh Hivemind of Yaktribe?

Their thing is suns and stars, and they love plasma. Only requirements beyond that: It needs to be either a widely available transfer, or simple enough so I don't kill someone after painting it about 20-40 times. Oh, and, it has to be visible on yellow shoulder pads. Easy, right?
Reactions: Loriel, Edster, Mutant Modifier and 1 other person

If you care for a nod to WFB, how about using the badge for the knights of the blazing sun with the colours reversed? (I'm thinking the simplified version on the model at the bottom of the linked page.)

A black circle is relatively straightforward, and any variance in the rays you paint would be a matter of individual heraldry. Or if you can get access to a printer and transfer paper, it should be possible to create your own sheet for uniformity.
Reactions: Crazy Ivan

Borrow some symbols from the land of the rising sun?

maybe the Ra disc from Ancient Egypt?! (The Aten)

A simple black sun (circle, a few rays) superimposed by a yellow sword, would be my suggestion.
Reactions: Schank23

Today, you can learn a German word. The word is "Verschlimmbessern" which is untranslatable as is, but means "making things worse when trying to make them better". And that is just what happened to the camera on my phone, since the last patch it has been glitching something fierce, which is why I gave up trying to take pictures of these dwarves after 12 tries.

These took about 5 days, which is another record, considering there are 10 of them.
Reactions: Edster, Crazy Ivan, Mutant Modifier and 3 others

Tiny update just so you know what the hell I am up to, I decided my project for April (no fooling whatsoever, by the way) will be assembling and painting 2 Grundstok Gunhaulers side by side, because I realized I only have two boats painted for my boat dwarves, and that cannot stand. 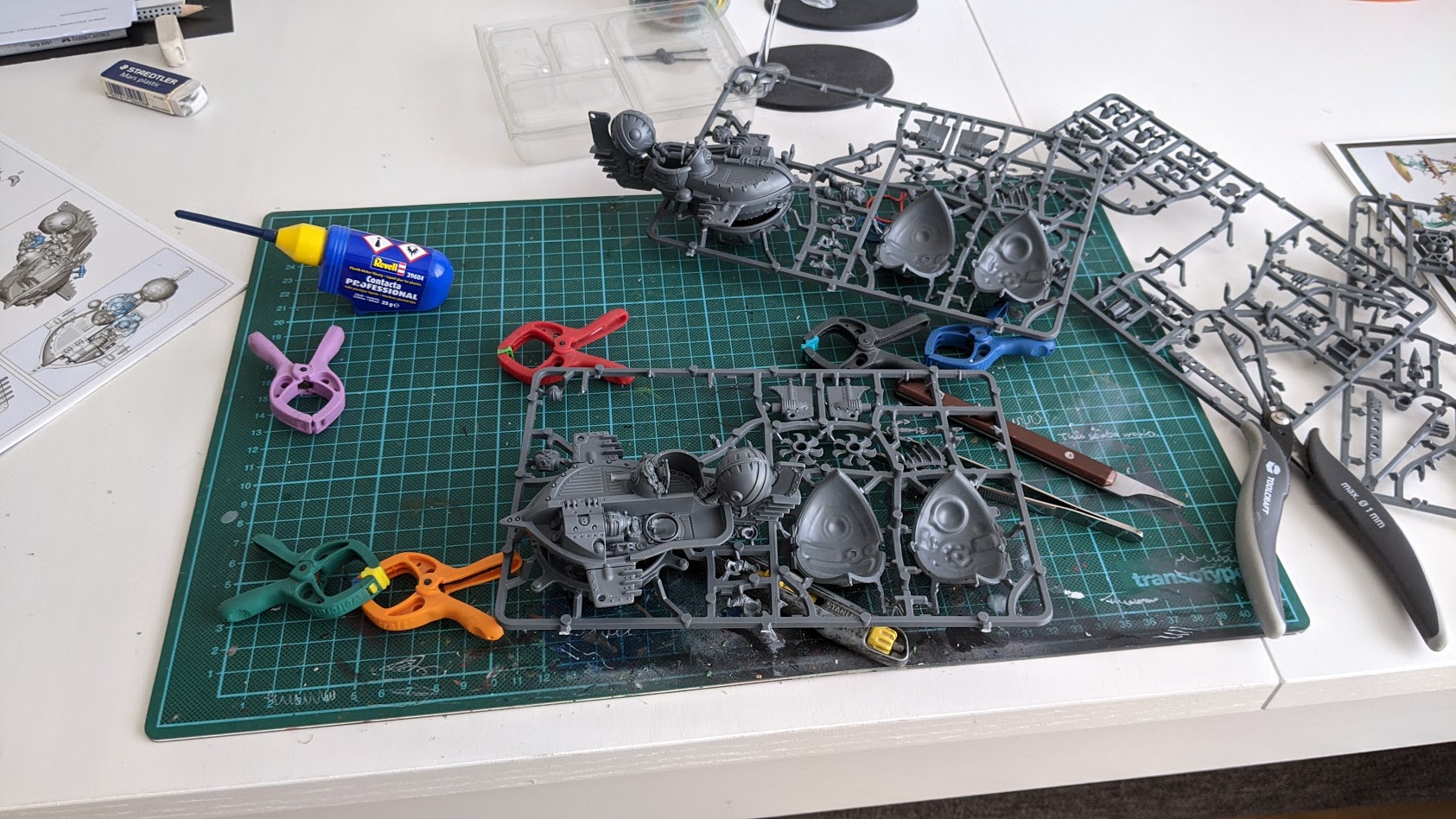 Fun fact: The ether-endrin part of an upturned Gunhauler sprue is the perfect stand for a half-assembled gun hauler, which is otherwise a massive female dog to keep level while the glue dries. By size, it would also make an excellent egg cup for a large goose egg, an emu egg or the eggs of various kinds of monitor lizard. Science!
Reactions: Punktaku, MedMos and Unslain

Spamming my own thread here, I was just cleaning up the hobby room after a debauched weekend of scraping mold lines, and found a "Start collecting: Kharadrons" box I forgot I bought. An entire box. My name is SuboptimusPrime, and I have a boat dwarf problem. 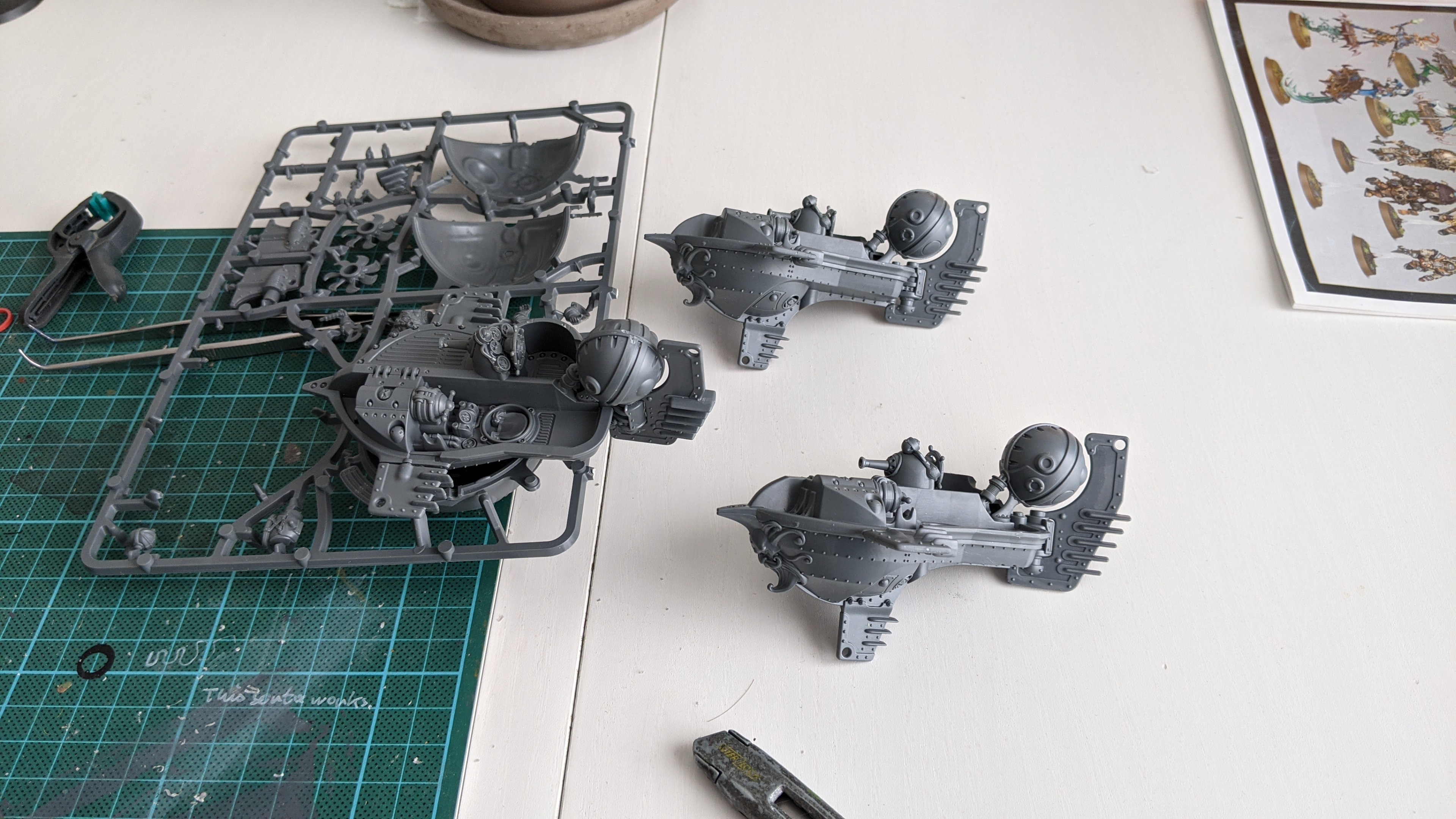 Welcome to the group, SuboptimusPrime. We are all here to help each other. Now about these dwarf boats... Are you really sure 3 is enough?
Reactions: Mr. M, Punktaku and SuboptimusPrime

Oh don't be silly, it's 4. One is already painted. And since 1 Ironclad, 4 Gunhaulers and 1 Frigate is kinda lopsided, guess who is getting another frigate as well?
Reactions: MedMos

I think what that unit needs is a core ship to rally around. Like a battleship or a dreadnaught. Aircraft carrier?!?

I mean, there is this thing: 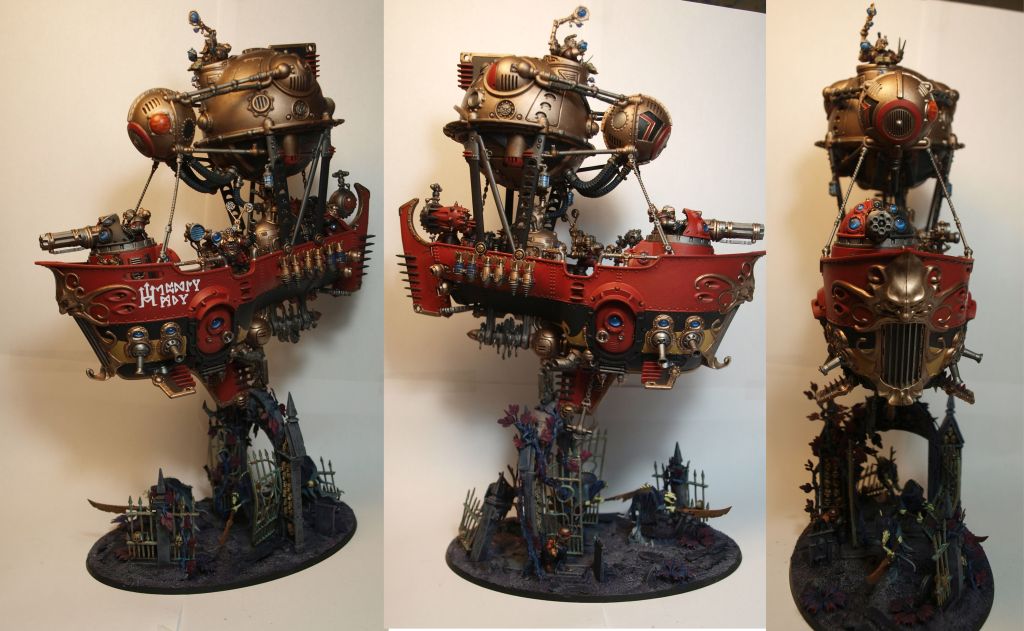 Yeah, but wouldn’t a battleship or dreadnaught be, well, MOAR!!!!

an aircraft carrier might be too big (ha! As if!).... unless, just maybe, the surface of the aircraft carrier IS the table top. Could also work for a dreadnaught class... giant gun turrets to fight around... both have superstructures that grow out of the deck... loads of scenery possibilities...

Edit: plus they would both need large crews... armed to repel boarders... and Captains!
Reactions: SuboptimusPrime and Unslain
Show hidden low quality content
You must log in or register to reply here.
Share:
Share Link
Top Bottom