I like the little base diorama, but I sure hope the pilot (driver, whatever) is careful where he's putting his feet...

Ben_S said:
I like the little base diorama, but I sure hope the pilot (driver, whatever) is careful where he's putting his feet...
Click to expand...

Princeps, and I can guarantee you they aren't, and nobody gives a damn. A few flattened guardsmen are the price you pay for stopping the Heresy. Or keeping it going, depends on your perspective I suppose.
B

The old WFB giant kit came with a trampled snotling (or goblin maybe). Perhaps the titans ought to come with flattened guardsmen.
Reactions: Unslain and SuboptimusPrime
P

Your wound counters for the IG could be the same sized base with some teased out cotton ball material flecked with Blood for the Blood God or the gauze used to staunch your latest modeling injury. Either should work.

I like the flattened guardsmen idea too. Titan toe jam. Should be optional toes for the feet of the new models.
Reactions: Unslain and SuboptimusPrime

After pondering on how and where best to attach Keith the cybercherub, I decided to first try the dumbest approach, to get it out of the way. Which was of course just gluing him to the plastic scepter end I pinned atop the metal staff. And thus I tried to attach angel and staff to each other, via the contact area between Keith's flapping grimdark party streamer and the skull, about 1 square atom. 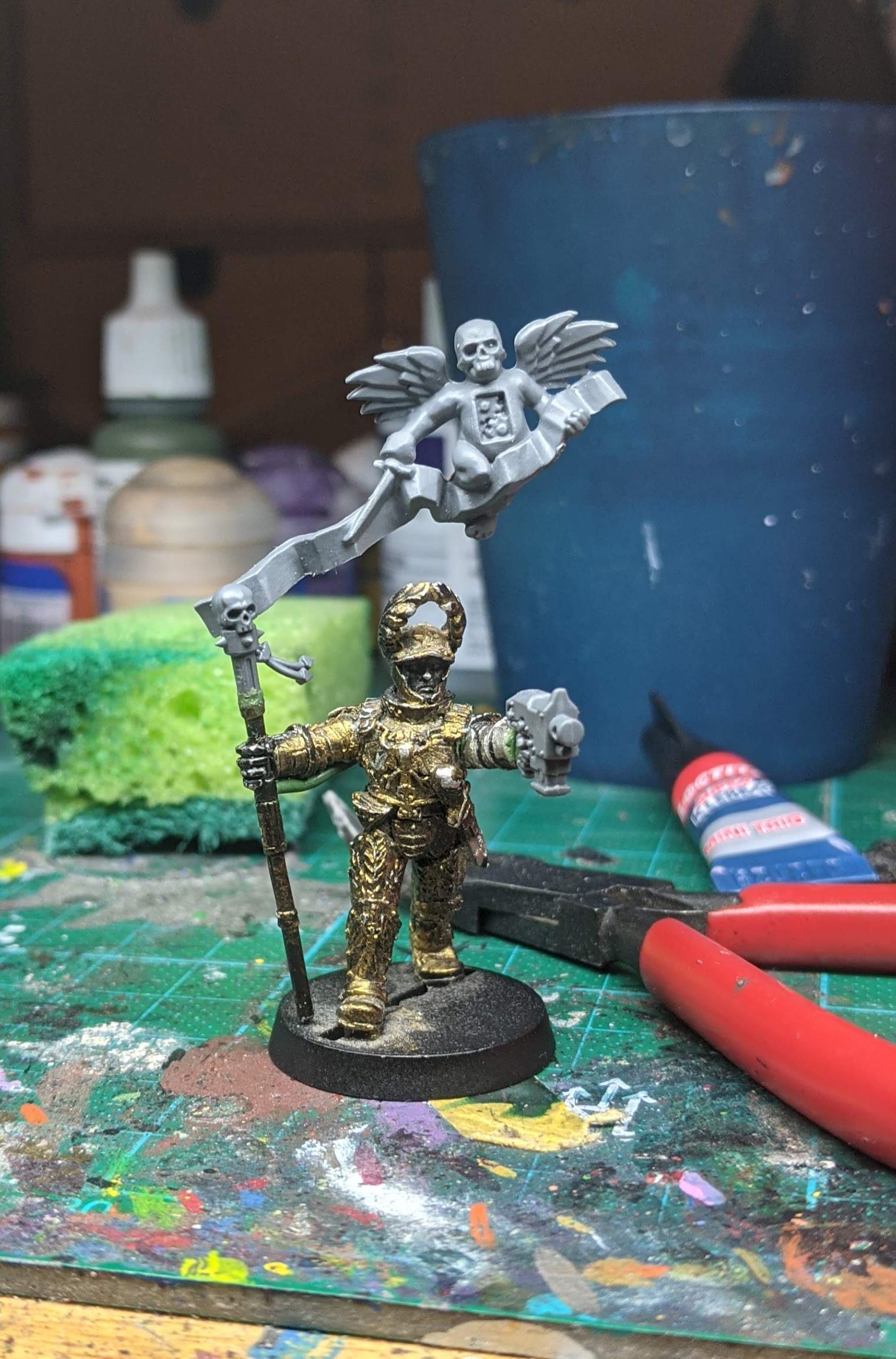 Lord Solar Macharius and Keith the cybercherub.
So very well, actually. No idea why, physics has decided to stop working I guess. Keith is quite securely fastened to his friend Solar Macharius, with a little spring to the whole thing, which is quite ideal.
Reactions: CaptainDangerous, Crazy Ivan, Ben_S and 3 others
P

It's not a mechanism in your thread but I'm torn between upvoting that you make an epic version of Mach and Keith or the 40K cultists that secretly believe Keith is the reason for their crusades successes. Ah heck just go ahead and do both.
Reactions: SuboptimusPrime

Hm, using the rules for a Helot cult to represent a heretical "living saint" who is convinced he is Solar Macharius himself (or maybe he IS Solar Macharius reincarnated, what difference does it make?) who don't sacrifice to the dark gods but "feed the holy Astronomican" and are accompanied not by Chaos Beasts but "blessed servants of the Emperor" ... there may be something there once project "All Gangs" winds down...
Reactions: Unslain and Pagumb

So I did a thing:

But I did another thing, or more, I finished a thing. And do you know what that is?

Ladies, Gentlemen, mix of both, attack helicopters, cyborgs, six-dimensional beings from Oort-98 and everyone else! It is done:

I HAVE PAINTED ALL THE GANGS!

All the gangs, all the time.
*servitors cheer and dance, several distant explosions rattle building*

Well, that's easy, I already have four out of six "house of" boxes lined up, those need to be done. Enforcers are probably the next whole gang, as I have those already, after that it's probably Helots, the Cult of the Necronomitelecomnicon has a branch on Necromunda after all. Oh, and I wanted to build at least one figure for every hanger-on. And maybe a brute or two, I always wanted to convert that Blood Bowl Ogryn I have. Venators are an option too. Also there's my Kharadrons, not to mention Mechanicus and...
Last edited: May 13, 2021
Reactions: Edster, Sundown Dreamer, Sump Duck and 10 others

I lose track of my followed threads for a few days and next thing you know, @SuboptimusPrime has indeed finished all the gangs. Awesome. My Mark X helmet off to you, good adept, and a high mechadendrite-five. Good to see also that the Quest for Knowledge (of painting all the things) does not end here. In my totally unbiased opinion, you should do Enforcers next.
Reactions: Space Truckin, Pagumb and SuboptimusPrime

Right, sharing what I did on the weekend here. A friend overheard I was getting into Titanicus. And he asked me if I wanted his Titanicus, as he didn't like the ruleset, but didn't feel like selling stuff on Ebay. I asked how much, he said "Eh, take a look and pay as you like" driving out to his house, I was expecting two Warlords in relatively good state of assembly. Well... 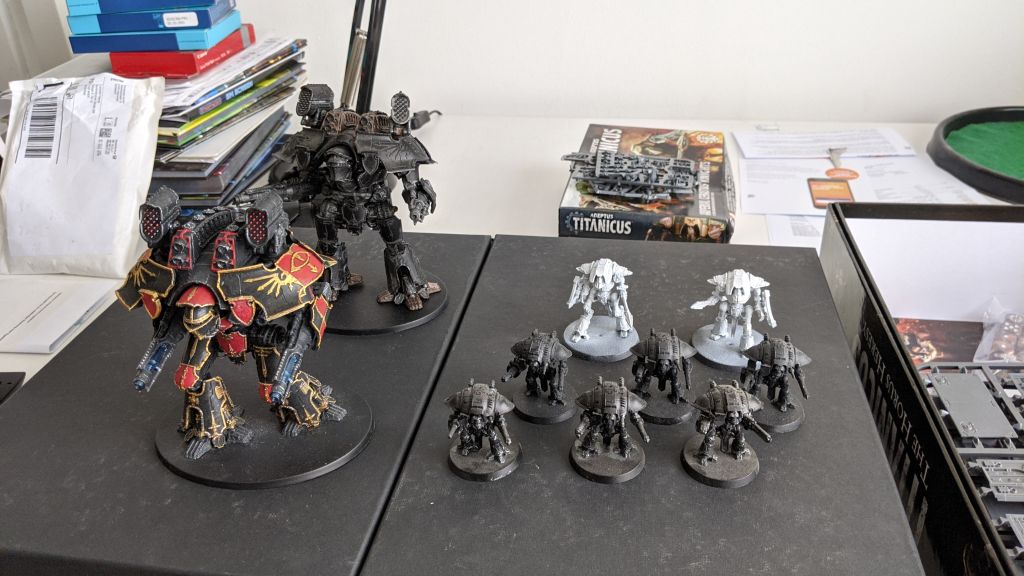 What you get after you say "Yes" after a friend asks "Do you want my Titanicus stuff too"?
A bit more than 2 Warlords. There were also two Warhounds and two Reaver Titans, but those I picked up for another friend I who said he was maybe vaguely interested. Because of course I flog plastic crack to my friends, and of course the first hit is basically free. If there is no player base, you must build one yourself, and exitus acta probat. 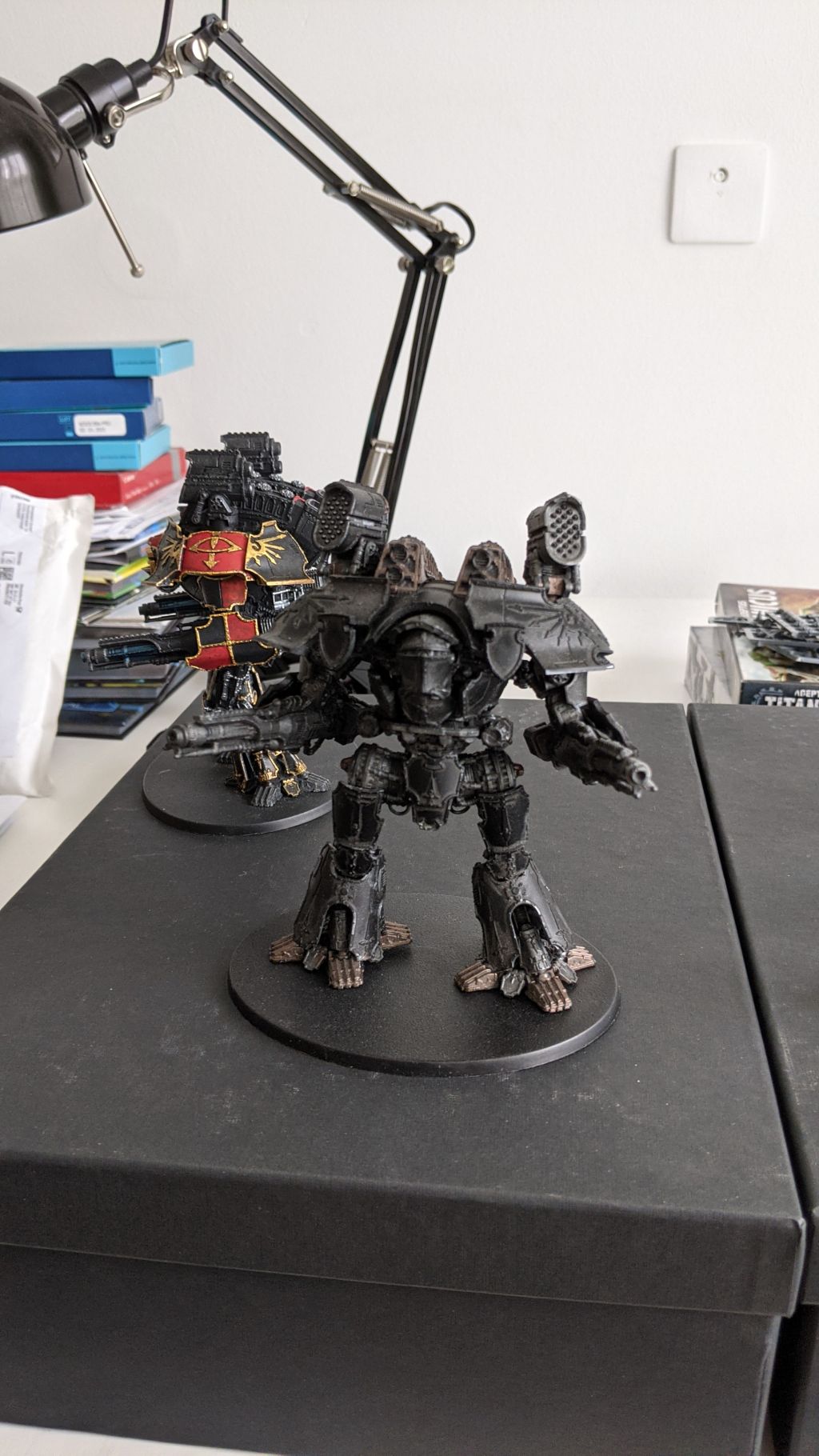 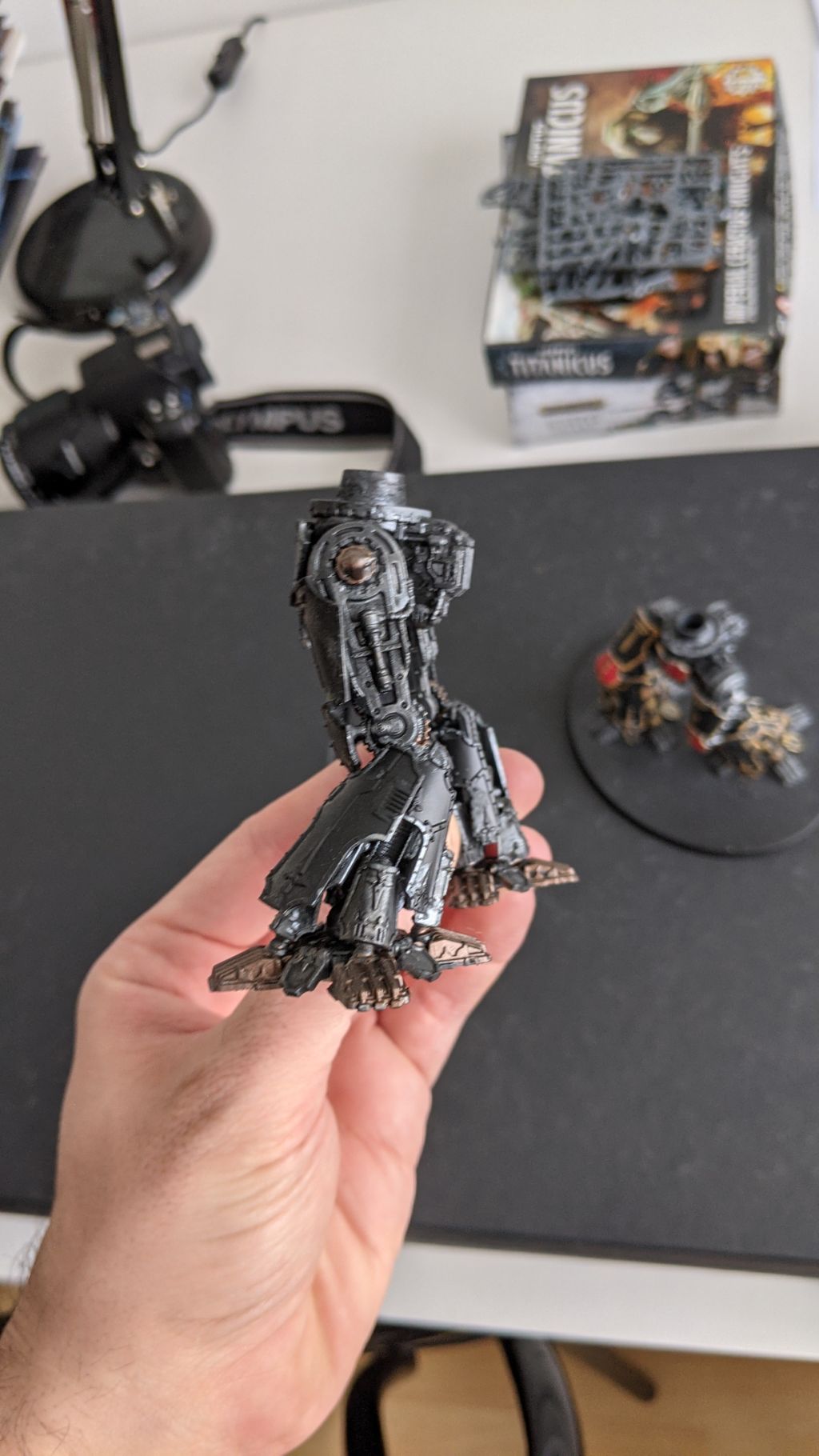 Because of this knee probably. Not on board with that assembly decision, but considering how...
Clear case of "just because you CAN move it that way doesn't mean you SHOULD, Moderatus!"

Anyway, all of this plus a Heldrake for 100€. He insisted I take the Heldrake too because 100€ was too much for the rest of the stuff. The man used to work at a game store, so his backlog fills an entire shed in his backyard (and I do mean fill, as in from floor to ceiling) and consists mostly of stuff he got discounted or as store freebies as well, but still a massive steal. Also because it included "the boxes". The boxes were mandatory, he really wanted them gone. 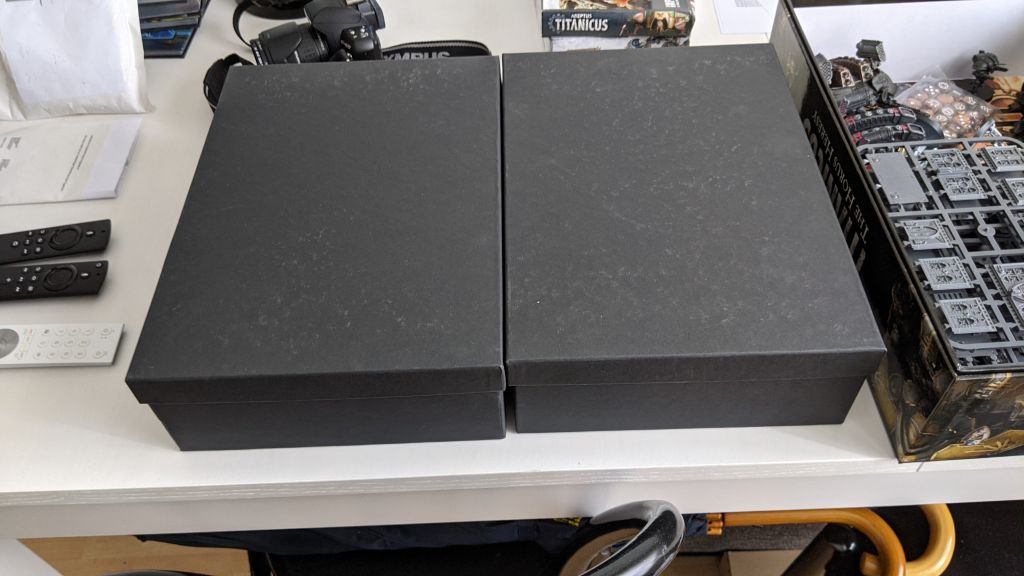 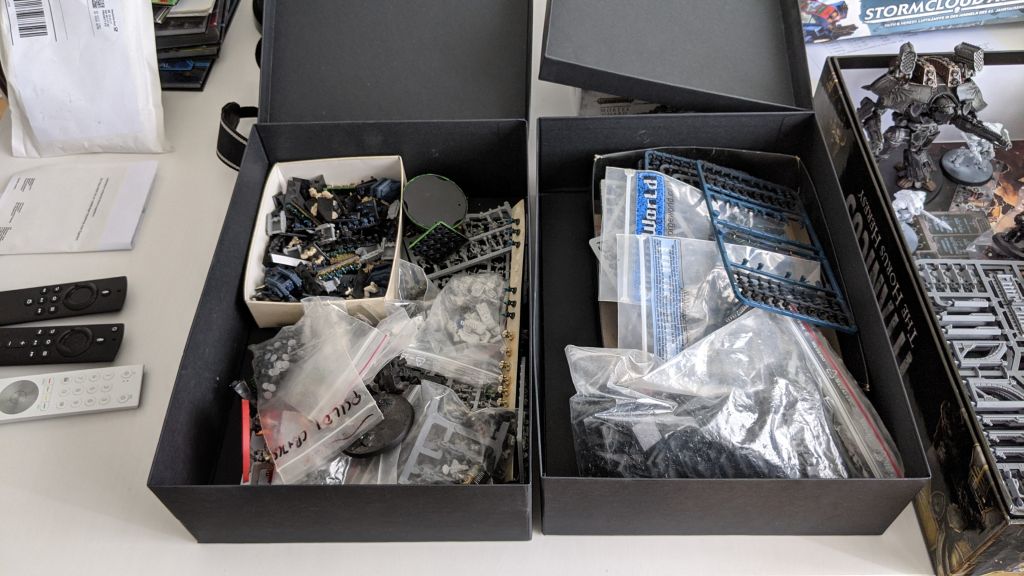 Some?
That is a bit more than "some". 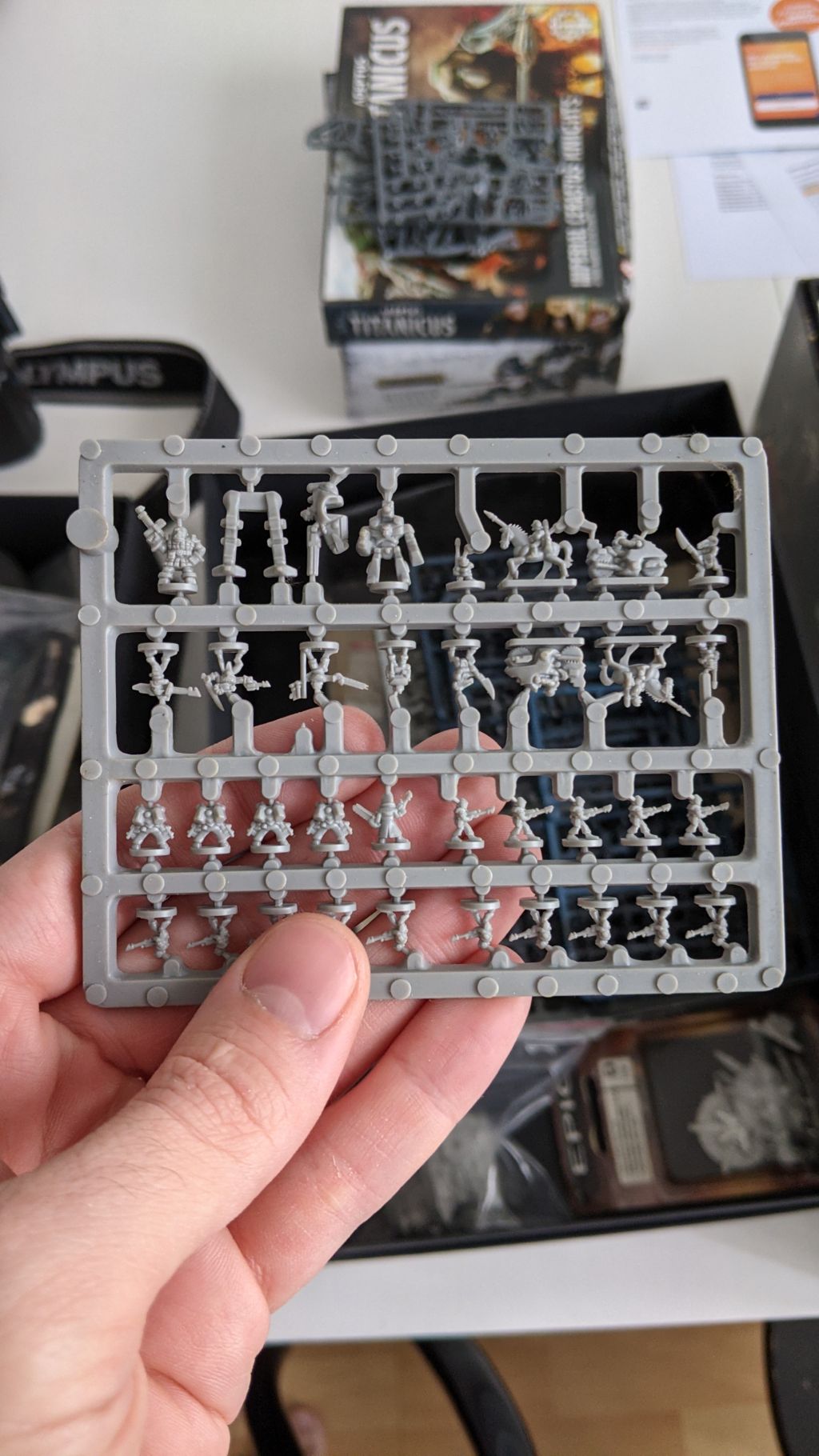 When guard still had beastmen. And motorcycles. 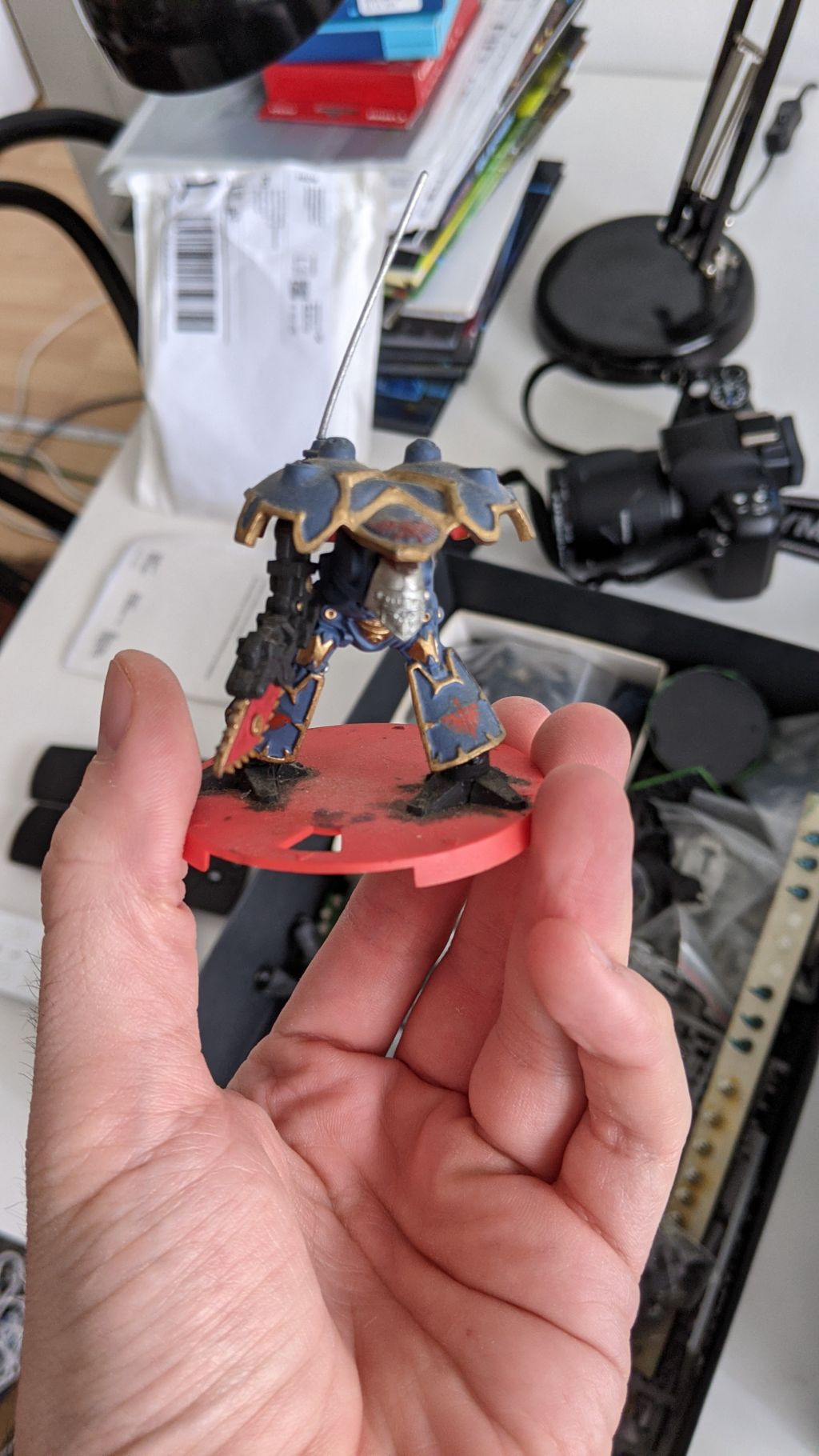 It belongs in a museum.jpg

This I know, an original beetleback Warlord. Crazy. 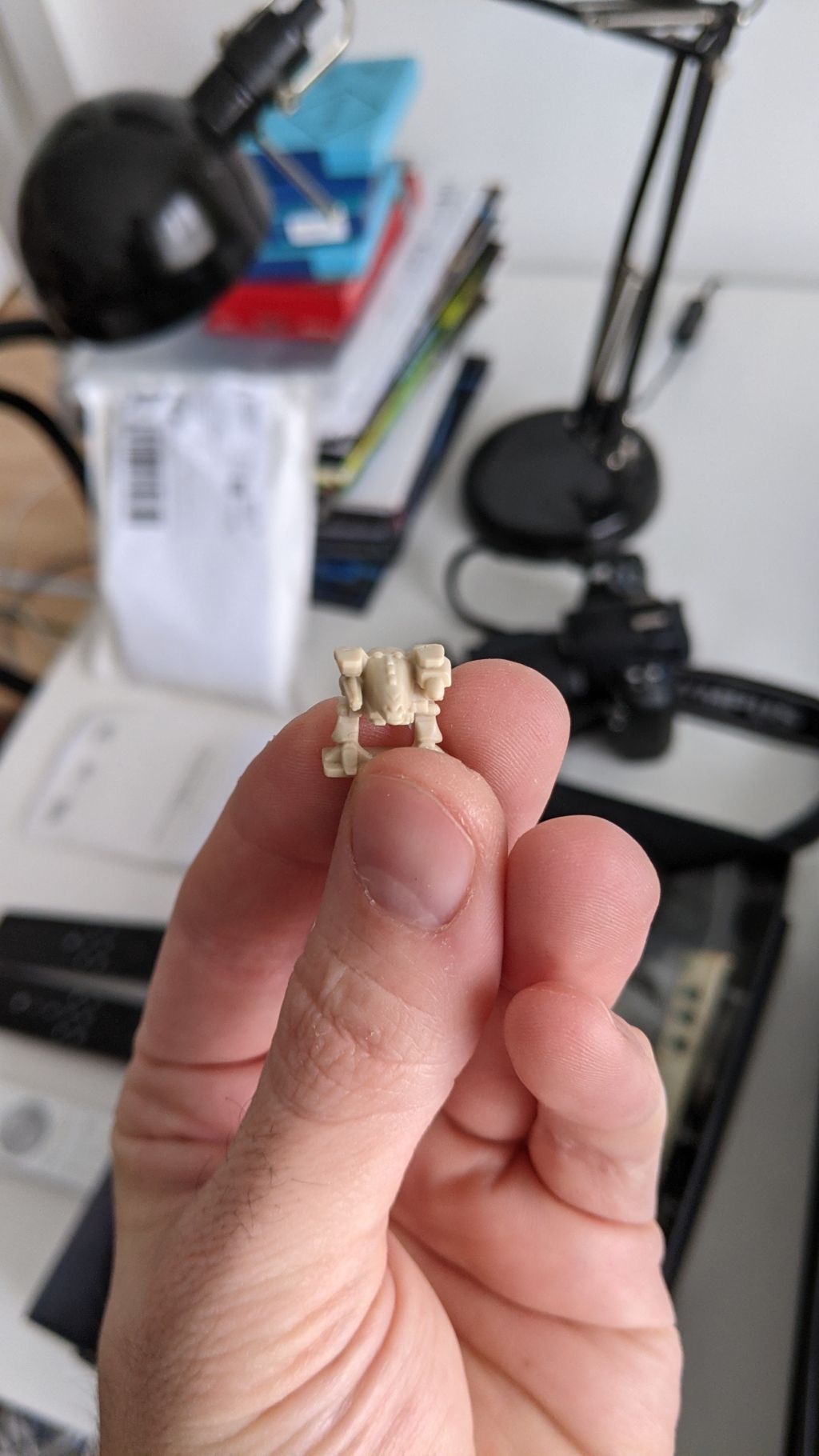 I can even remember what this is.jpg

I think it's a Dreadnaught? I am too young to know this.
Woah, blast from the past. I don't even know what that little plastic dread-thing is, I think I vaguely remember seeing a full-size one in Space Crusade pictures (Edit: Have since confirmed, it's a Space Crusade Dreadnaught. Didn't know they made those in 6mm scale). There's probably 2-3 armies of Epic 40k stuff from various manufacturers in there. The bag of Space Marine vehicles alone is at least 20 Rhinos and Land Raiders plus a bunch of Predators from third-party manufacturers.

Ah right, the Titans were of course from the slightly odd "can't use this in a normal maniple" grand master set. So I got a set of Civitas Imperialis as well, plus all the cards, markers and everything, neatly packaged or still on the sprue. Praise be to friendship.
Last edited: May 17, 2021
Reactions: Edster, Sump Duck, Mutant Modifier and 8 others
B

I don't know what that kind of stuff usually goes for in Euros, but I know that was a bargain.

Bargain is an understatement. The warlords alone would be 170€. The Grandmaster Set they came in went for 240€ if I remember correctly, and the grab-bag of Epic stuff is literally priceless, as in you probably can't find the prices a lot of this used to retail for. Current value, well, a casual glance at Ebay prices, even when adjusting for scalpers, tells me it's A LOT.

With anyone else, I'd figure they didn't know what they have. But that particular friend has been wargaming for longer than I've been alive, so he knows damn well, he just really doesn't care as long as the stuff is used in any way and not languishing in a storage unit.
Reactions: cardyfreak, Ben_S, CaptainDangerous and 2 others

I'm taking the next two days off from work because tomorrow at noon I shall go and see Jab 2 - Son of Jab. The upshot of this is that I may finally get around to painting again, and my cogitator banks have decided that my first Warhound titan is next. To that effect, I am giving you an insight into the process by which I choose paint schemes: 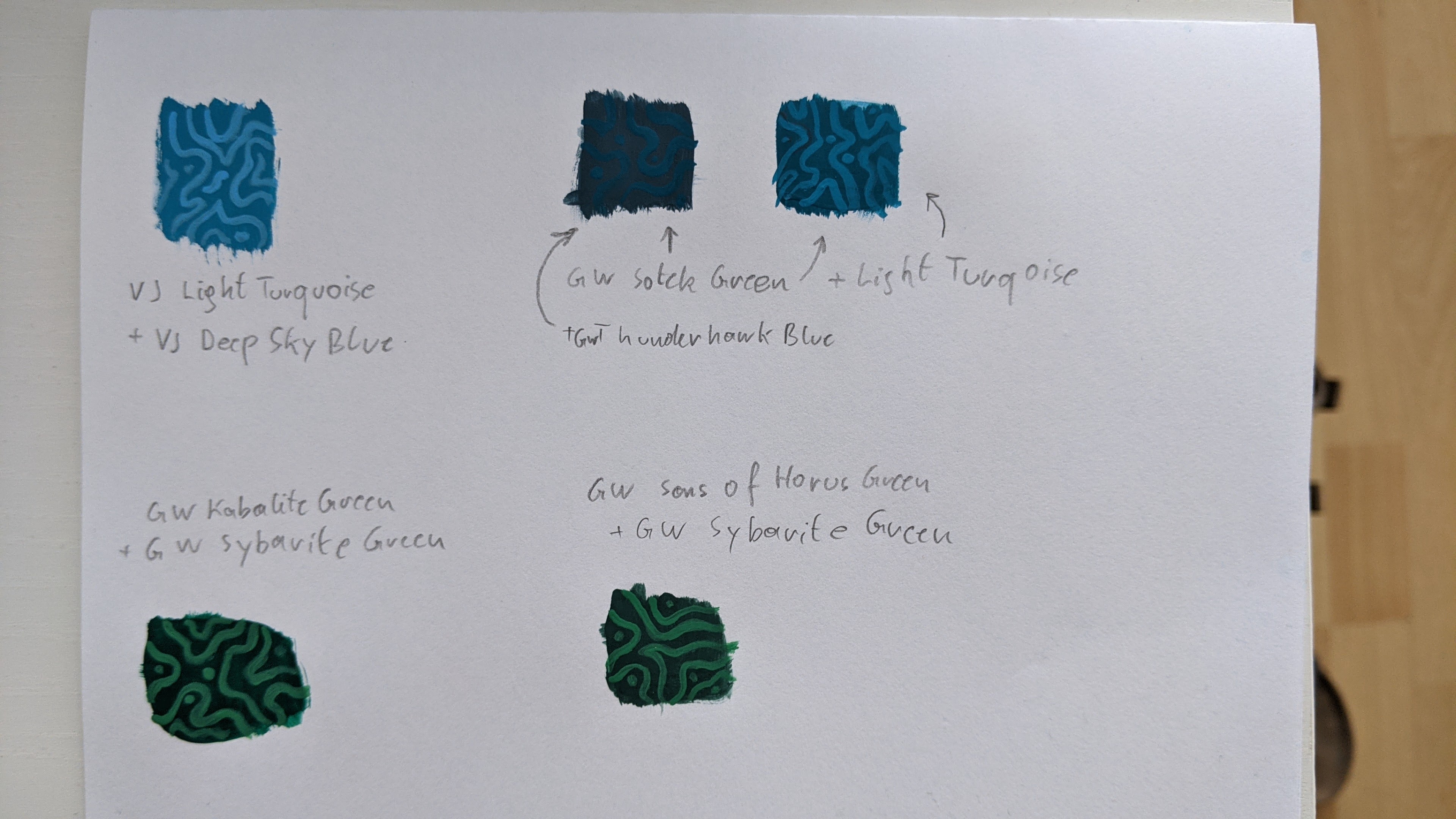 The pattern could maybe be familiar to people who played Warframe. My tendency so far is upper left, because my custom Titan League has a bit of a nautical bent, but also a fan of bottom left. Any comments? Edit: The cellphone camera made the contrast at the bottom ultra-harsh, it almost looks black in the photo, as I just noticed. It's actually a dark green with a very light green over it.
Reactions: Mutant Modifier and Edster

Out of those selections, the bottom two are my favorites. The both look very similar on my phone’s screen.

Top left would be third. The tones are too similar. The bottom two have more contrast.

the middle one looks like a single color. And the top right doesn’t look...right.

Watching the parental outpost over the Pentecost weekend is an honored custom alternating between my sister and me. But as is sadly also custom, whenever I do it, it's a rainy and cold weekend. So any plans of just lazing about the yard and drinking beer like some sort of indolent ratling have been thwarted. Yet, praise be to the order meteorologis, I was forwarned and brought stuff: 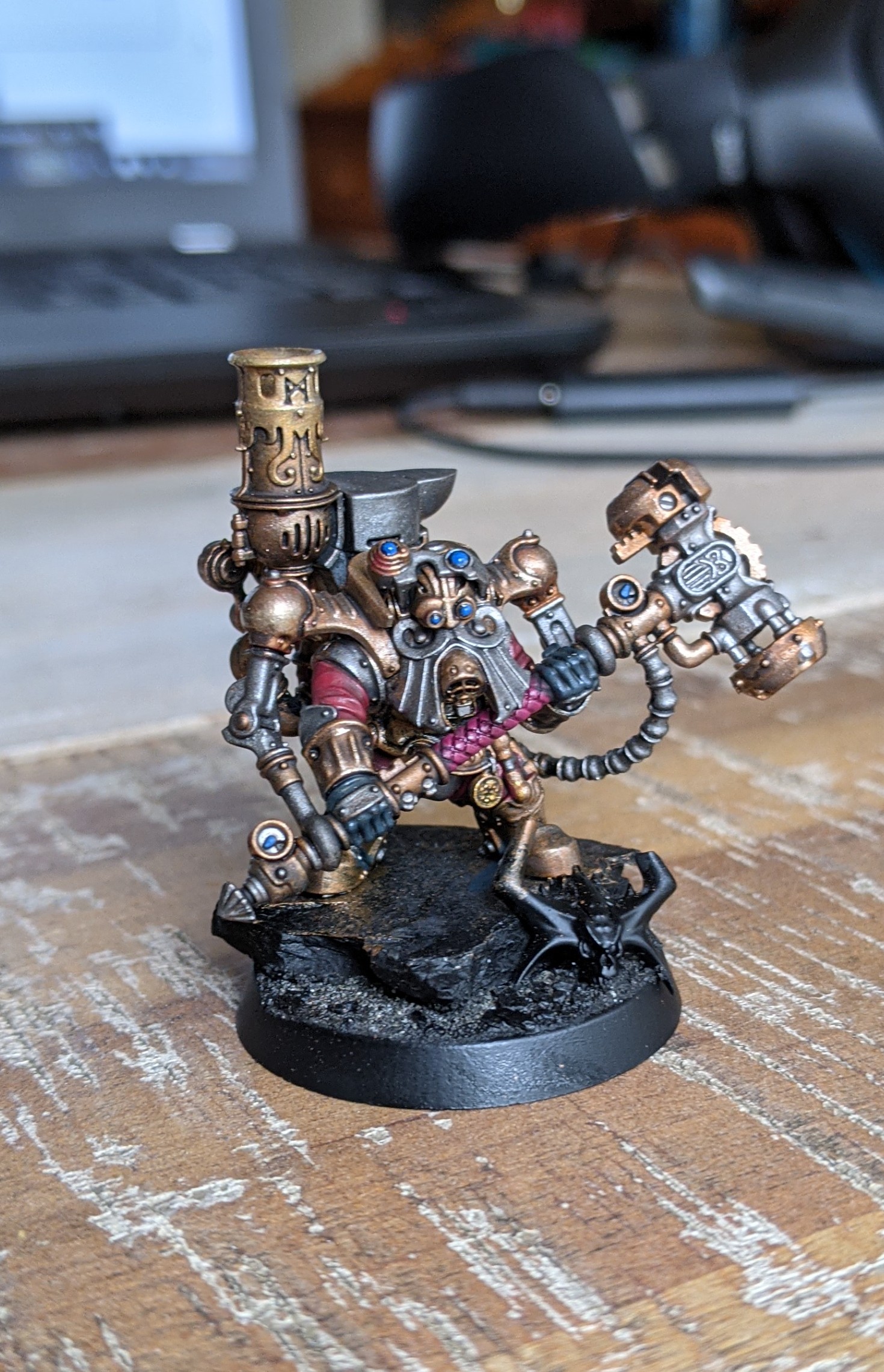 I also forgot to bring the colors for the base.
Last edited: May 22, 2021
Reactions: Vertico, Sump Duck, cardyfreak and 5 others

That is a nice piece! I really dig your techo-dwarves. And their ships!
Reactions: SuboptimusPrime

After chipping away at the unit for what feels like ages already, I slogged through the last steps to finish one Endrinrigger, so I have a model to orient myself and gauge how much more work will go into this. 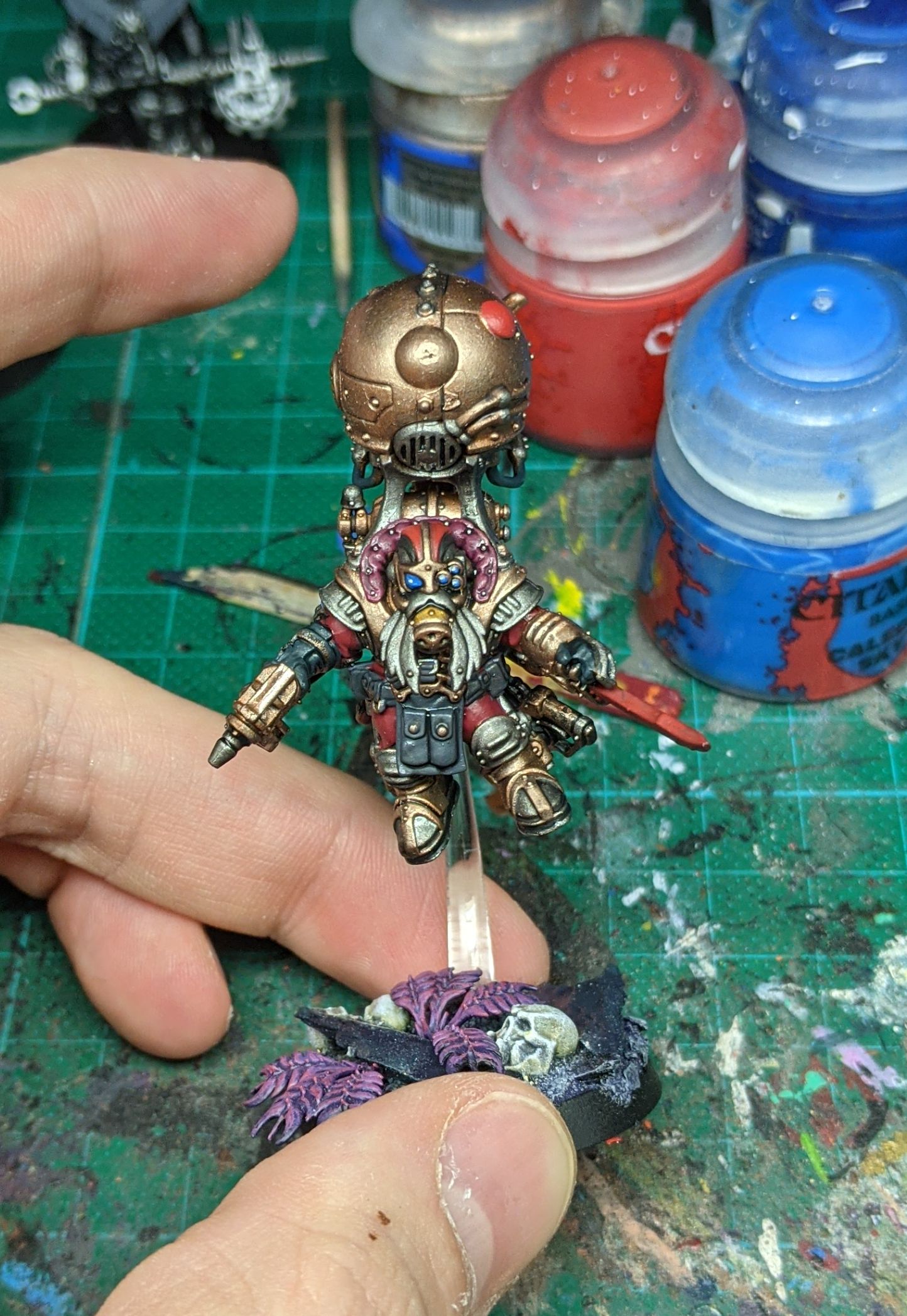 So. Many. Tiny. Details.
So short answer: A lot.

Long answer: Wow, that is one weird first-world problem to have, my steampunk dwarf pirates have so much lovingly sculpted detail that I keep missing tiny bits and getting slightly overwhelmed.

Upside: Six more Endrinriggers and a small boat, all of which are more than 50% done, and my goal of painting a table-ready army of these is, err, reached. I vastly underestimated how much Kharadrons cost points-wise.
Reactions: Edster, cardyfreak, Crazy Ivan and 3 others

And after much slogging and almost another week of getting very little painting done (this time the blame is on a few friends gifting my Deep Rock Galactic and us playing the damn thing until our eyes bleed) I present to you: Dwarves. With BALLOONS. 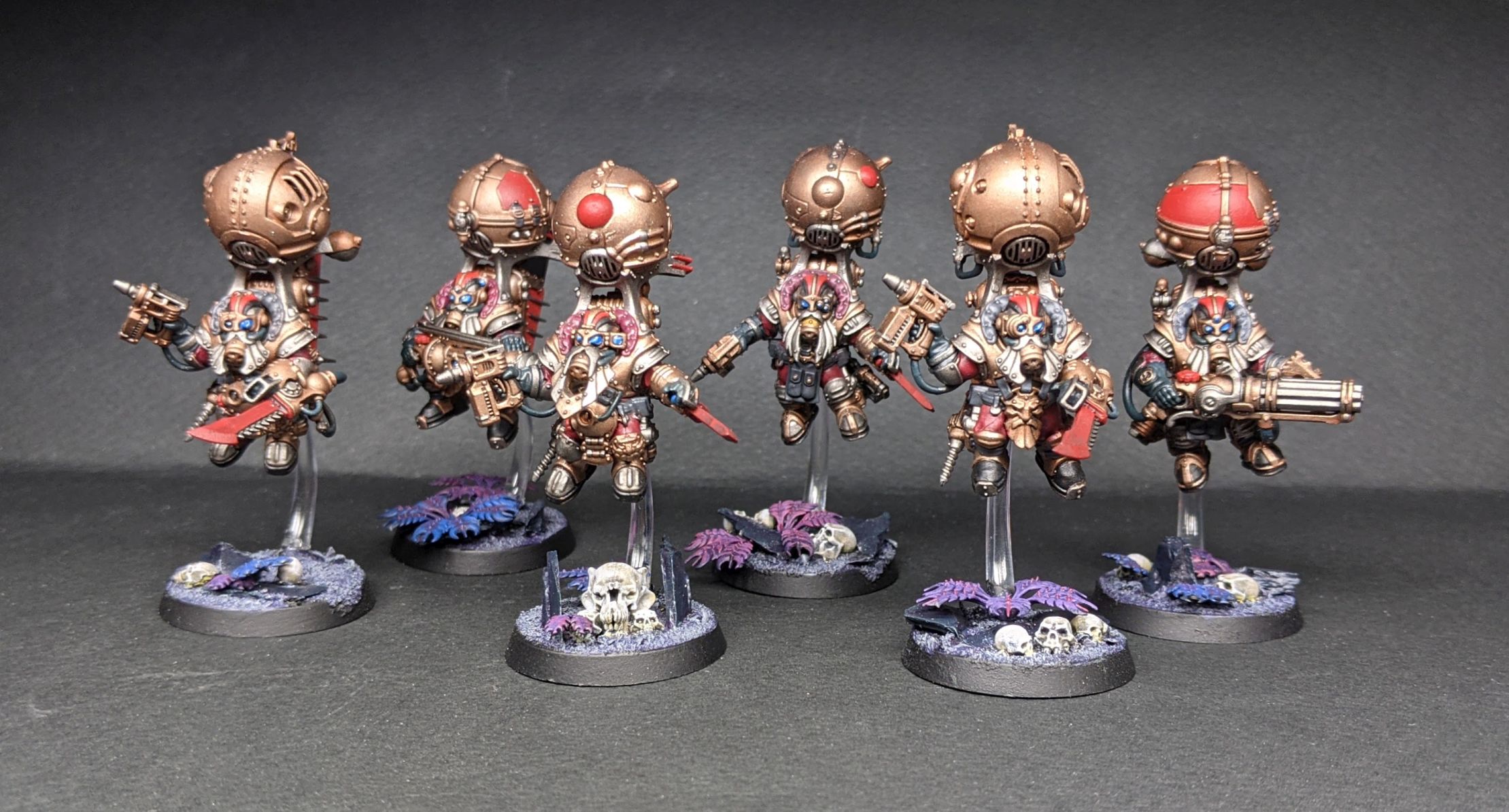 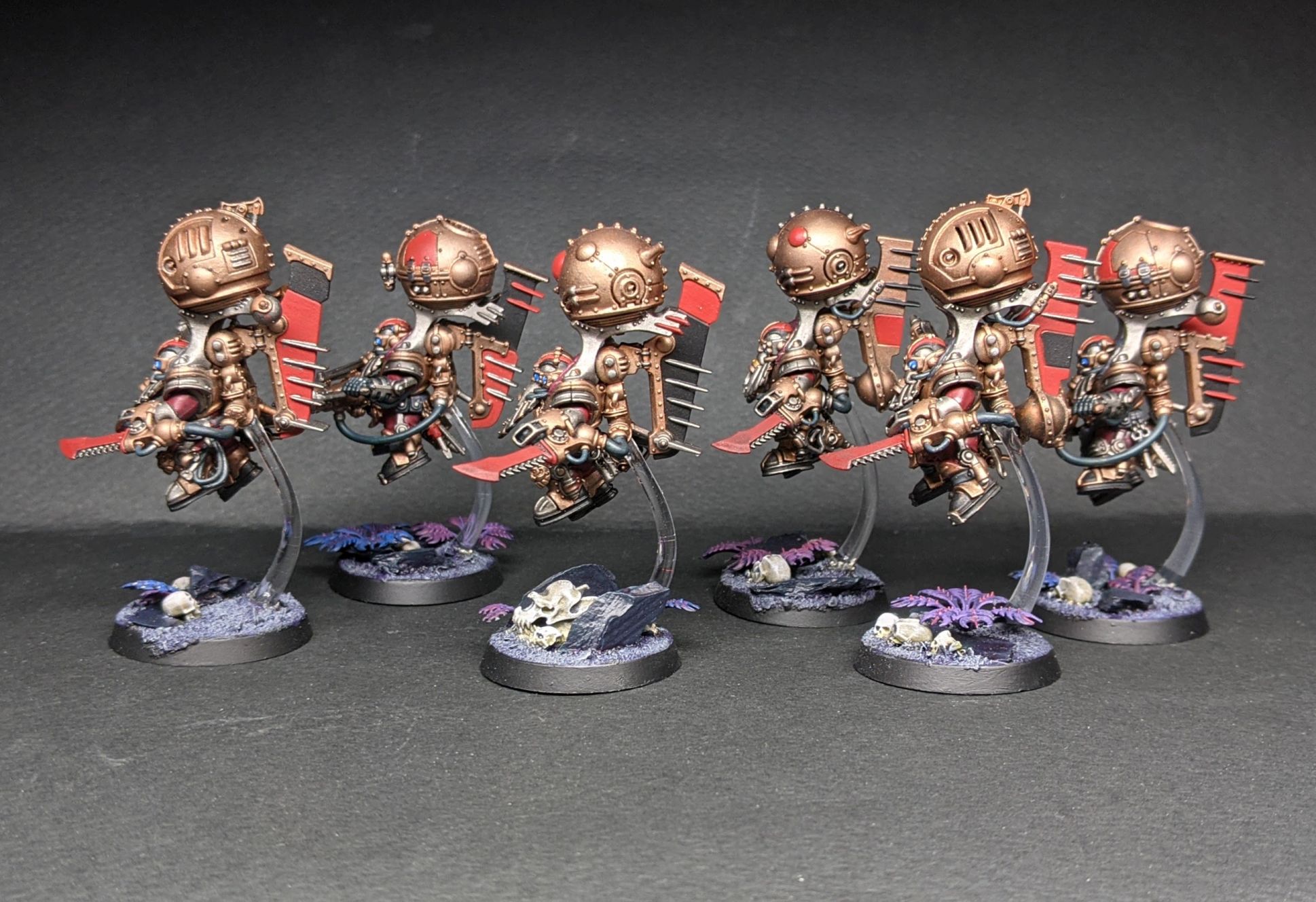 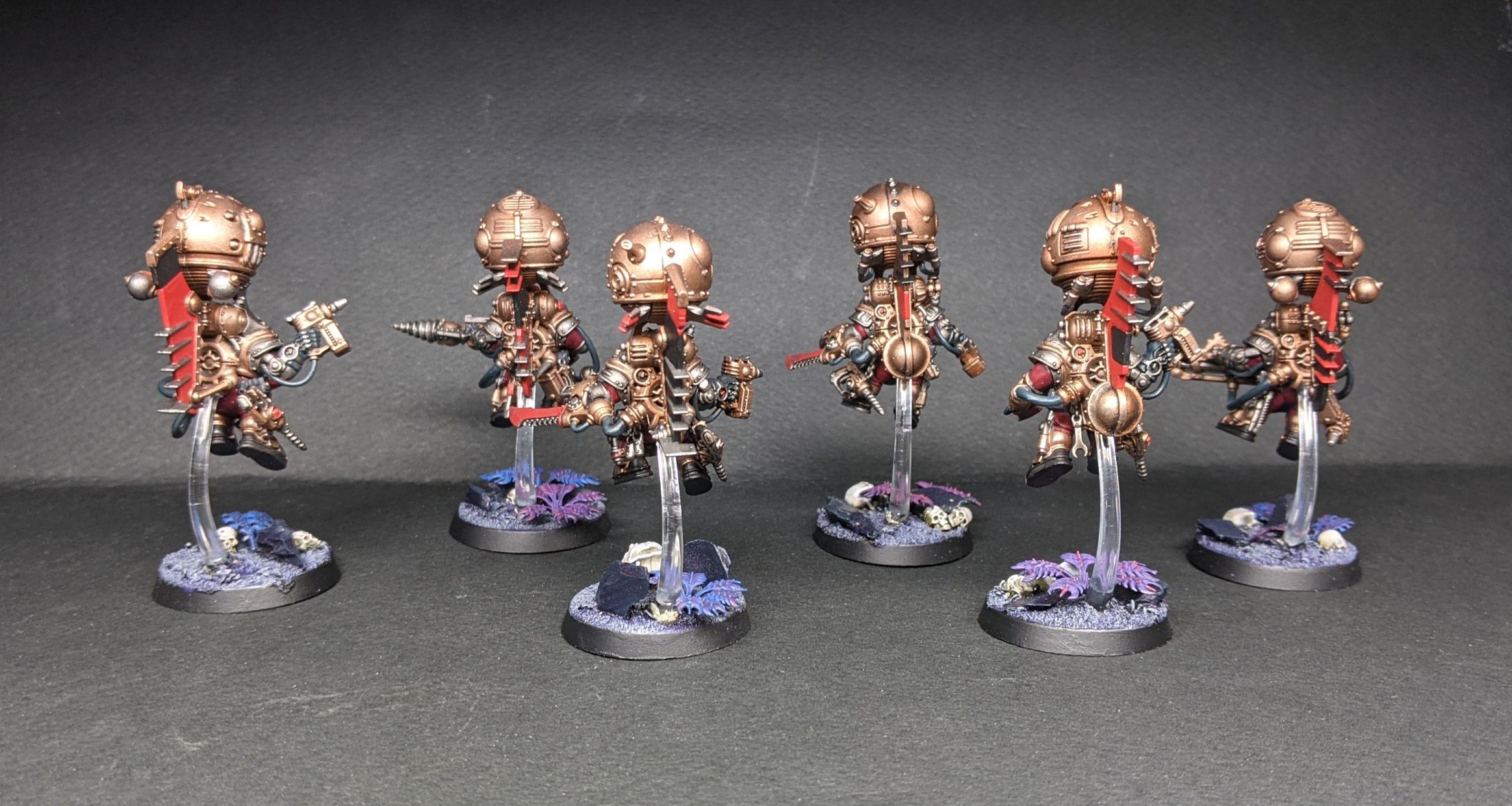