The Cold and Dangerous North Hive

Good evening, everyone! I suppose it's more like morning, but anyway.

I've been seeing quite a few WIP threads, so I figured I'd chip in with my own works. Progress will be patchy and probably come in bursts as inspiration hits me (and when exams permit), but I'm trying to work my way through my older gangers again, since their models need a bit of improving.

The campaign I've been playing in, up here in the cold (and currently very wet) north is mostly a four-way battle between The Black Oaks, an Orlock gang hailing from the Black Oak Settlement, The Queens of Noise, an absolutely lethal Escher gang notorious for containing a few human blenders as well as broken but competent fighters. Third is The Saints, an ironically named Delaque gang who could not care less and will shoot you in the back. Last and certainly most disgusting is The Megablock Reavers, a group of rag-tag misfits and mutants who should be shot on sight! Still working on that last bit, though. 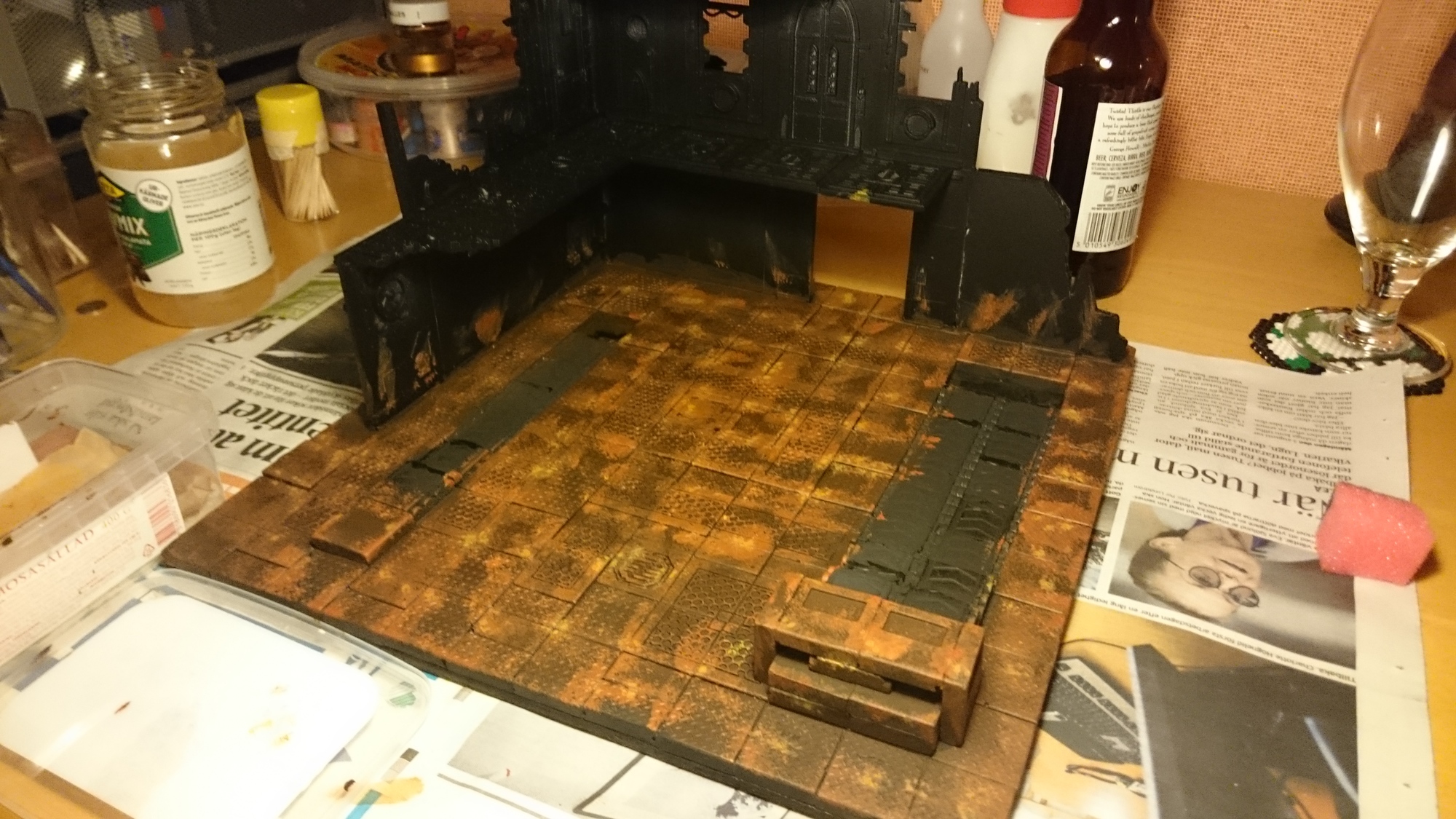 Preparing the floor for hairspray weathering. 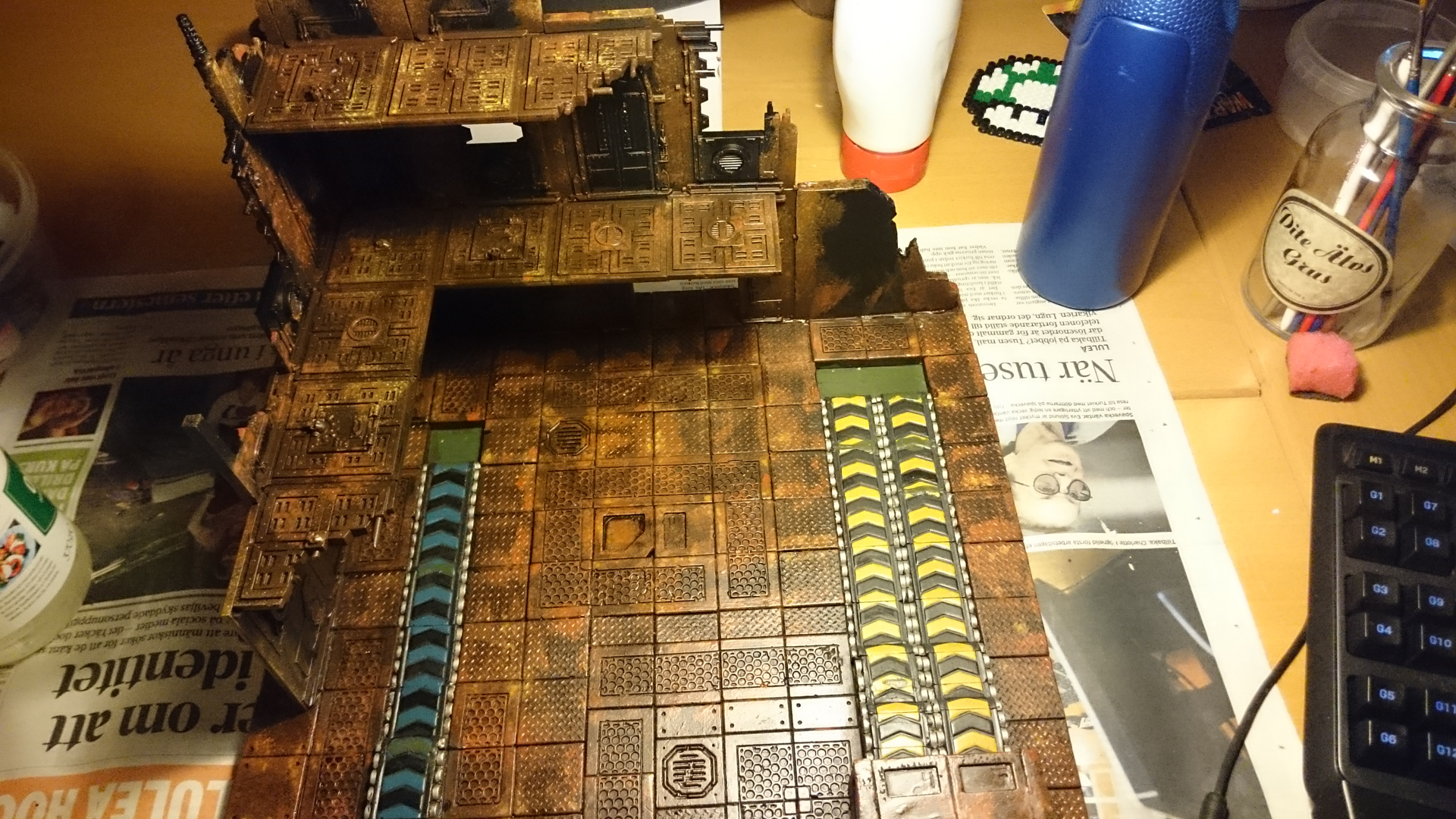 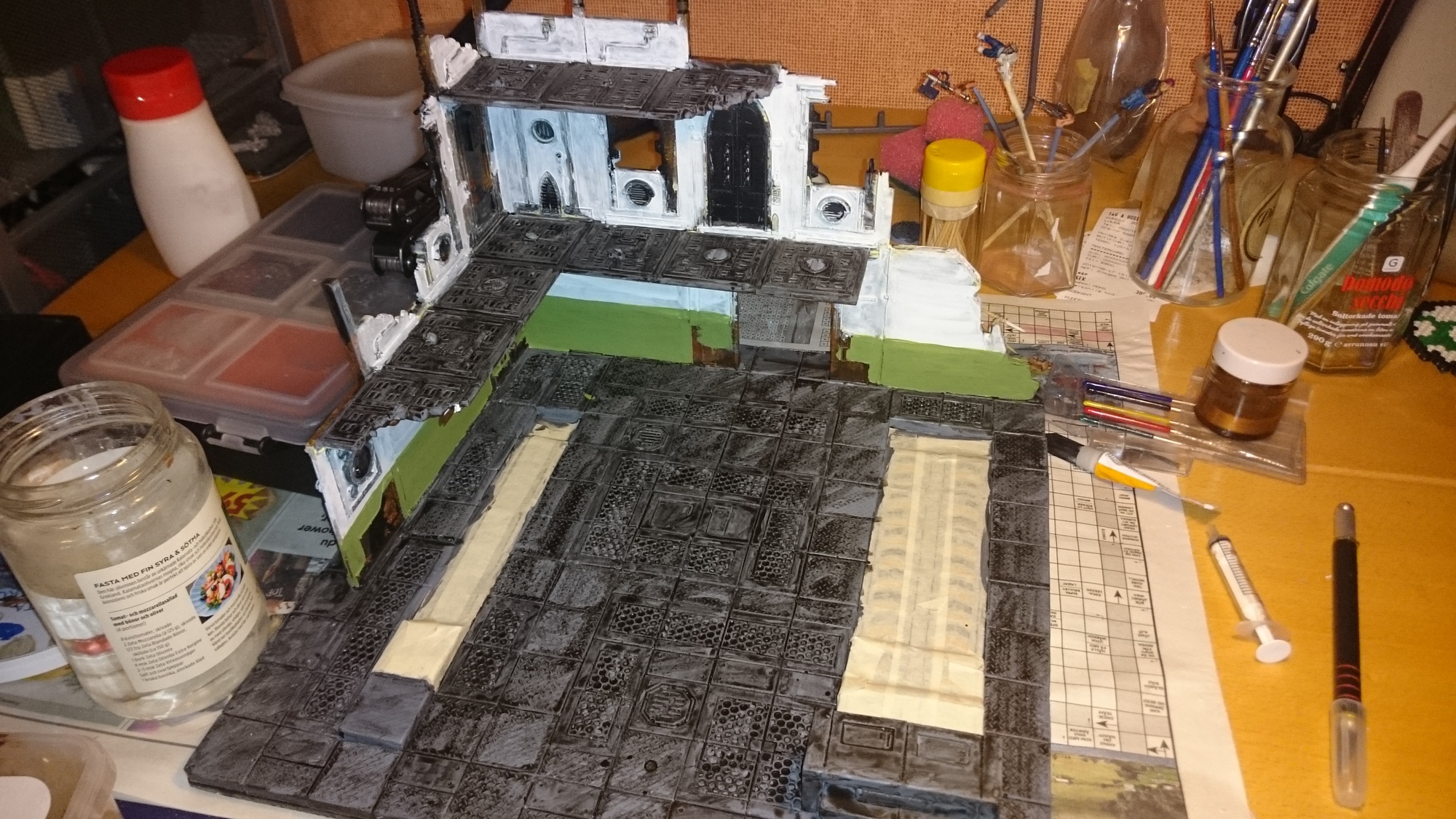 Floor and walls covered up with their proper colours. I hate white.
Some hot water and an old toothbrush later... 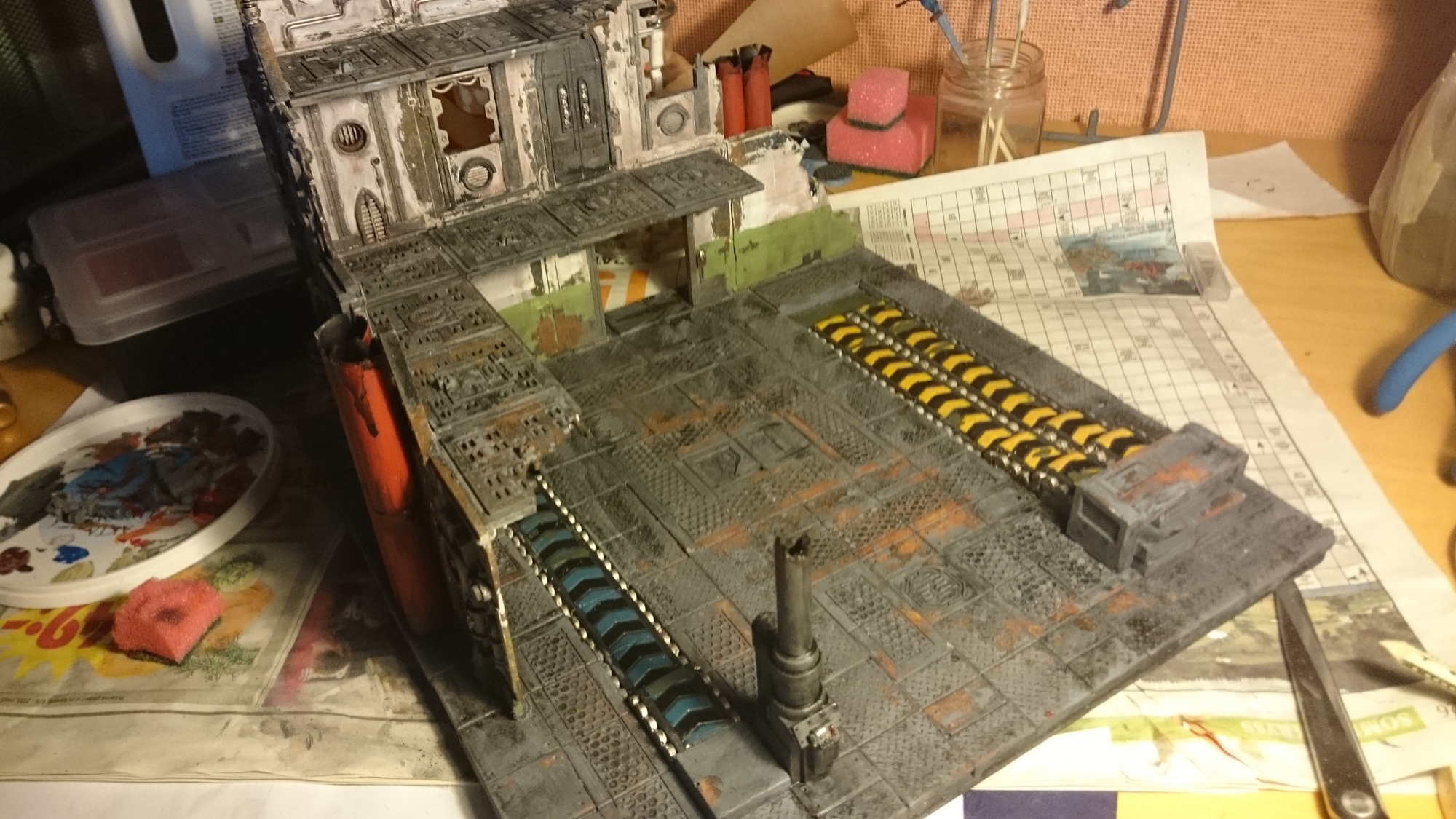 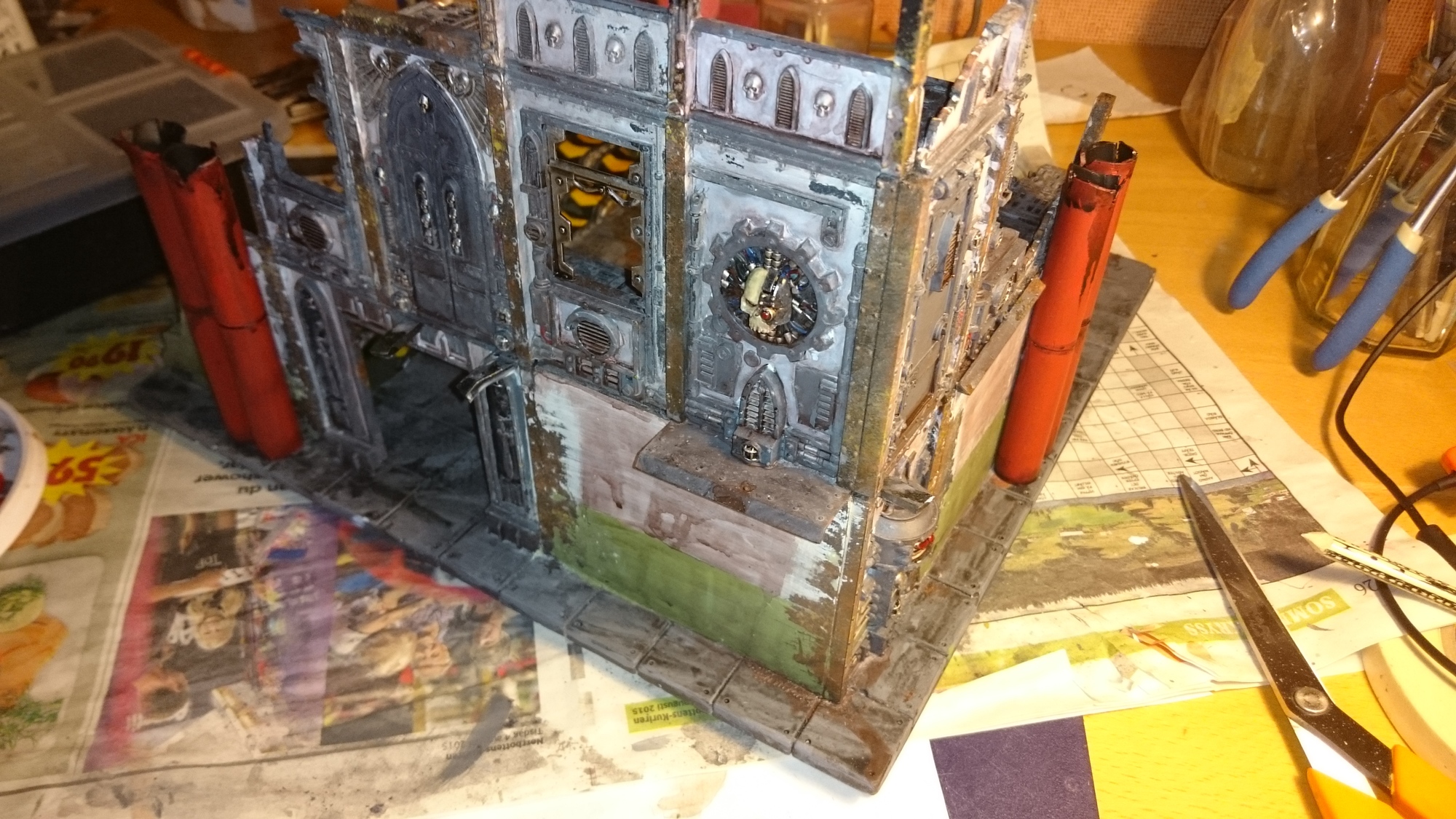 Also comes with a neat Mechanicus logo and lots and lots of dirt! Planning on adding some posters to this to bring some additional life into it.

First, we have Old Man Heat. His name is actually Ivan Danko, but he's been known as Heat since forever, and recently got the Old Man title to match his grumpiness, stiffnes and bad leg. 'Fraid I haven't got much in the way of WIP on him, just some of him all finished. 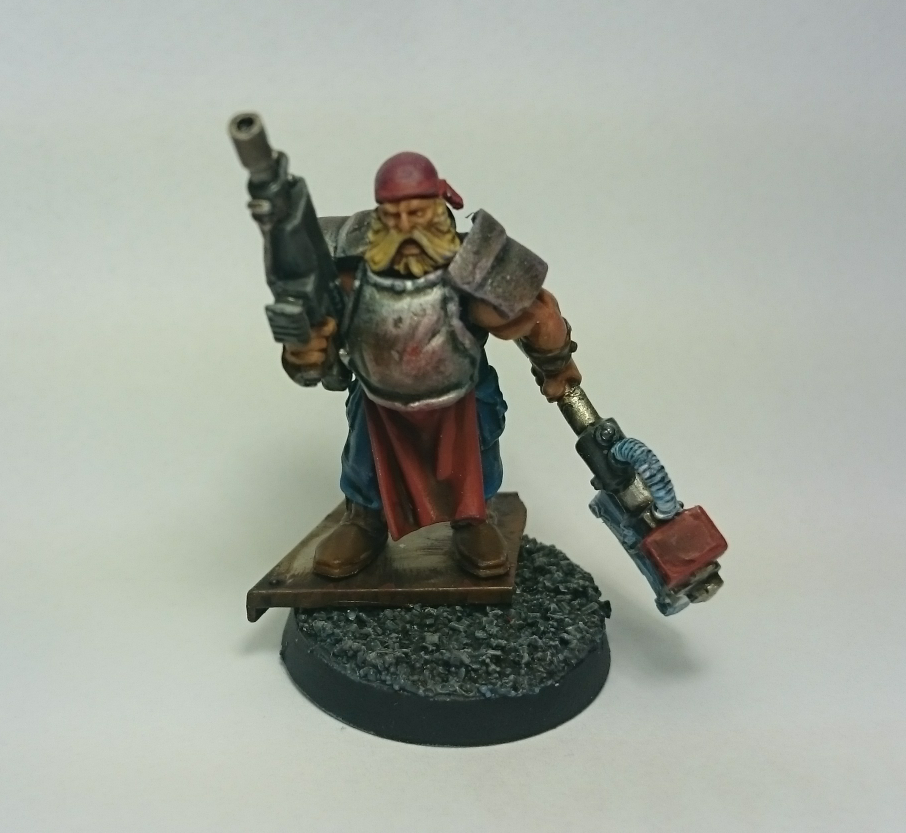 Some side views, taken before I gave him a base. 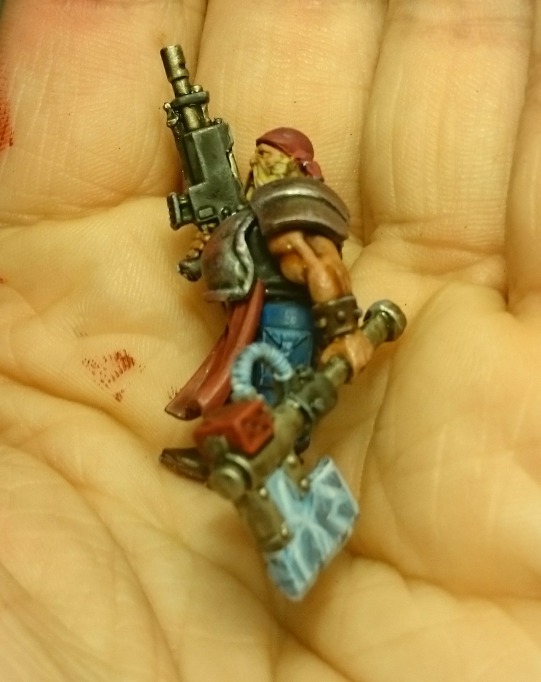 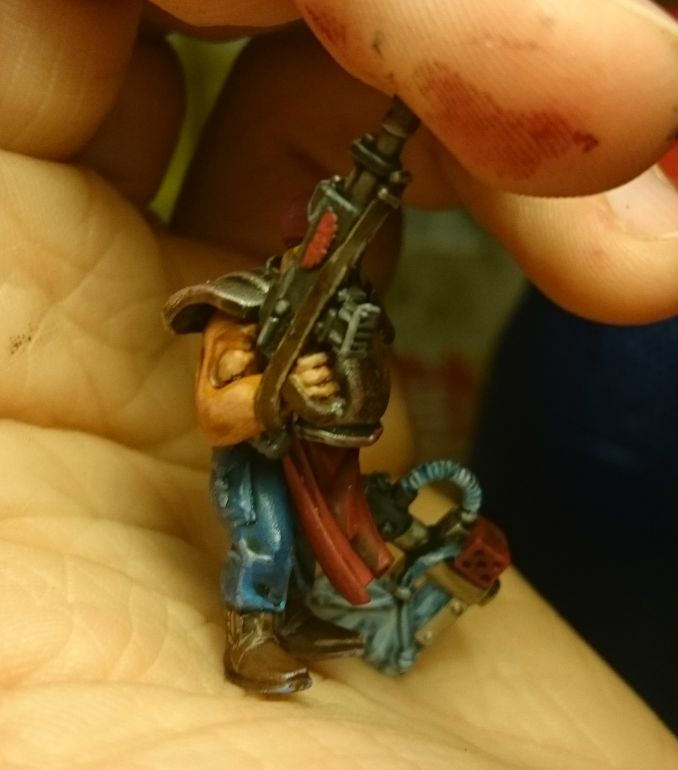 He's quite the scary fella, with WS6, BS5, Power Axe and Carapace Armour. Just too bad about the Leg Injury. 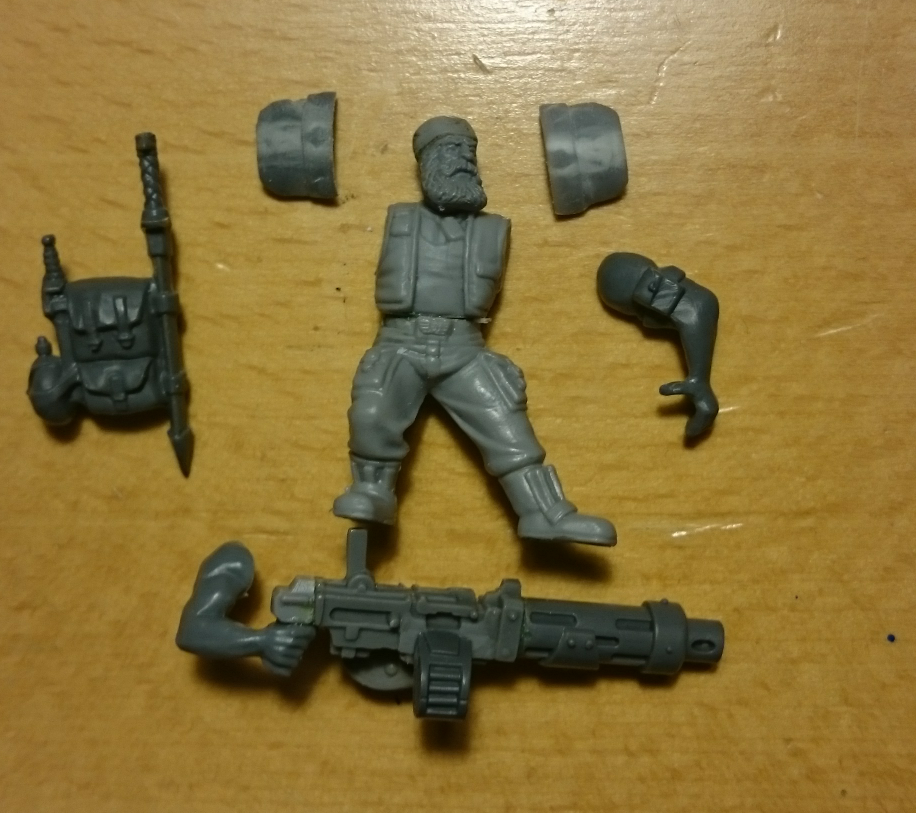 Here he is, unprimed. As you might have noticed, I kitbash. A lot. That's because there's a common bitbox at my gaming club, so everything that isn't used is thrown in a great big pile that anybody can loot from. Playing "guess those bitz" gets kind of difficult after a while. 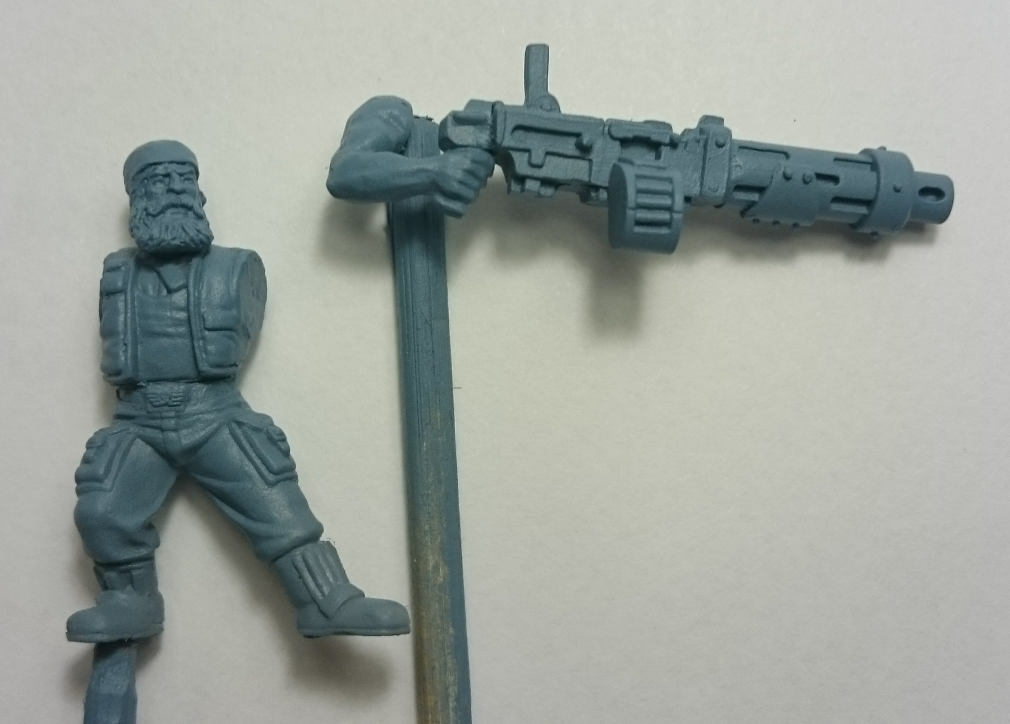 And, one paintjob later:

And we have ourself an Orlock Heavy. He's not really that cool, with BS 3. However, he does have a Mono-Sight, so there's that.

I'll be returning with more pics tomorrow. Or, well, technically, later today, I guess. I need to get to sleep earlier.
Reactions: Corporal Chaos, Edster, Creative_Destruction and 18 others

Colorado, US of A

A communal bitz box wouldn't last long with me around. You sir, have phenomenal self control.
Reactions: Ben_S, Edster, Creative_Destruction and 4 others

Badaab said:
A communal bitz box wouldn't last long with me around. You sir, have phenomenal self control.
Click to expand...

Well, a lot of those bits are unsuitable for Necromunda, like tyranid or daemon prince bits, but with a bit of creativity you could easily use Ork or various Chaos or Space Marine bits. Recently, however, the influx of AdMech bits in that box makes me want to get a hunting rifle and some cybernetic arms.

Nice that somebody caught that. Haven't gotten any custom rules through for it yet, though.


Anyway, more models in a little while. Gotta go do some studying.
Reactions: Creative_Destruction, Punktaku, nooker and 1 other person
B

Nice kitbashing, but I'm most interested in the board. Are the tiles made from Hirst Arts? Or something else?
Reactions: Creative_Destruction and trollmeat

All right, some updates! Seeing as I technically already have a gang, I can't really show you much pictures of their WIP. However, they were literally the first minis I ever painted, barring a space marine and a LotR Orc I did when I was eight. Thus, I intend to make new minis for them all in time. Either way: 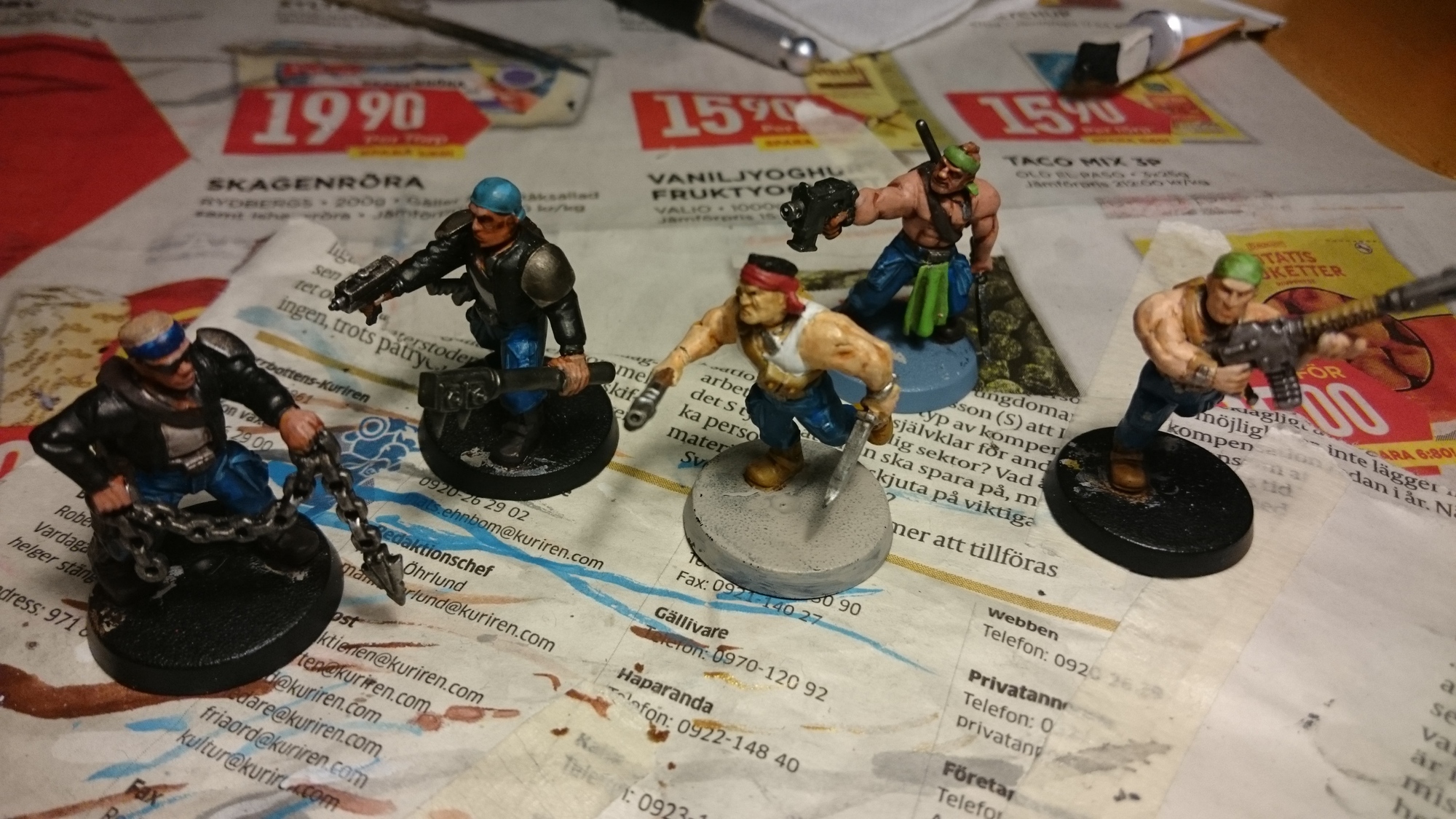 Here we have the to-be-stripped-and-broken-up-for-parts pile. From the left, there's Julius "Double" Benedict, Victor "Frosty" Fries, John "Copper" Kimble, Harry "Task" Tasker and Ben "Rat" Richards. Unfortunately Rat died last game, but he also had seven injuries. They're some of my less awesome sculpts, so they're going as soon as I can make replacement models. No, wait, Task shouldn't be in that group. My fault. Next up is the just-finish-the-highlighting group: 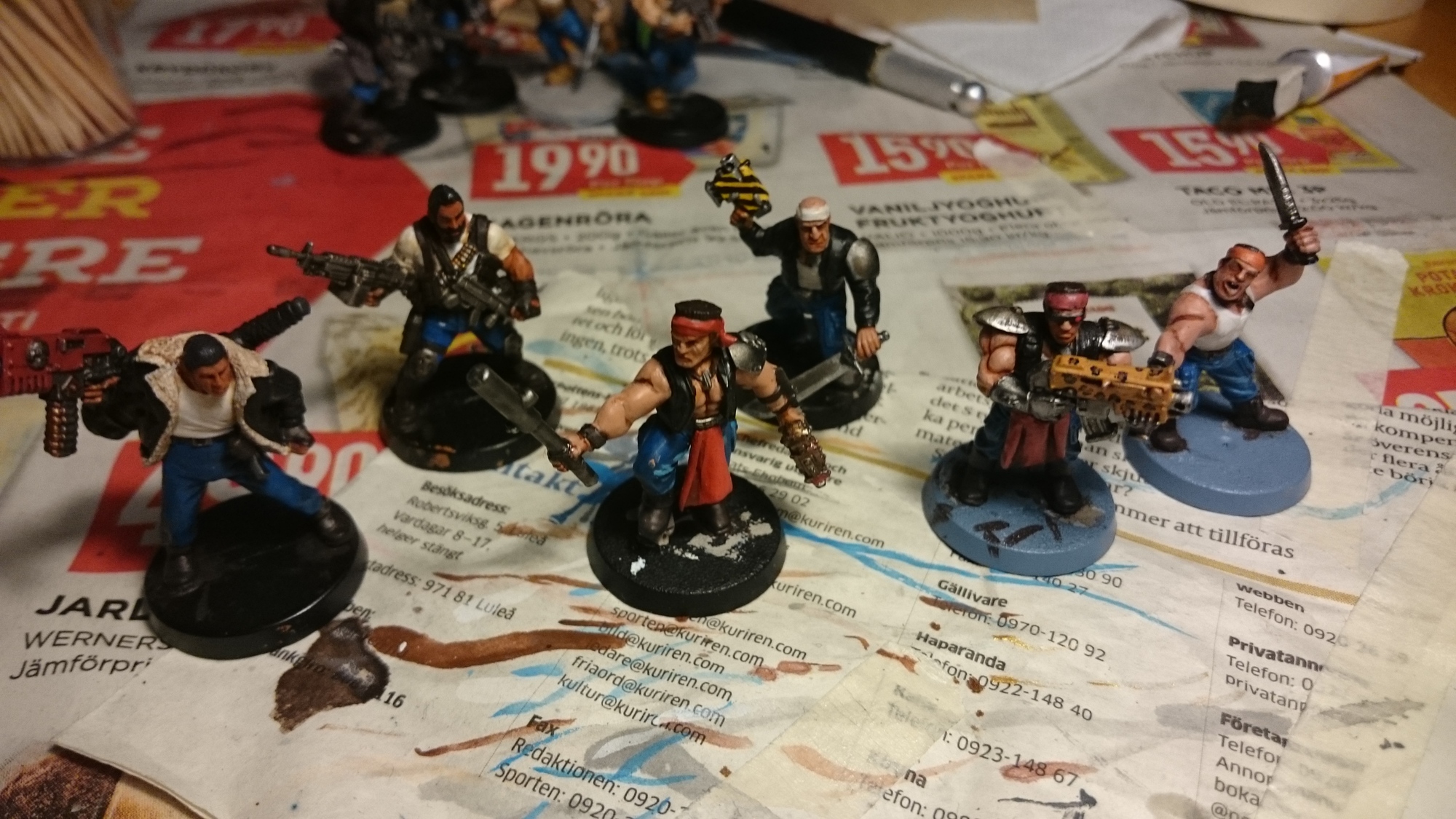 Here we have Jack "Slate" Slater, my leader, Ray "Mini" Owens, the old Heavy with autoslugger, Gordy "Drink" Brewer, John "Nick" Nicolay and Jericho Caine, useless ex-juve. Slate and Mini are both Hasslefree sculpts, although Slate has obviously had some modifications done. Might strip Mini and fix the base coat on his hair.
Reactions: Nuttowntau, Corporal Chaos, Mad Sergeant and 3 others

Ben_S said:
Nice kitbashing, but I'm most interested in the board. Are the tiles made from Hirst Arts? Or something else?
Click to expand...

I have no idea. I "inherited" the piece from a guy at the club who doesn't paint anymore. I think there's several boxes of that stuff and some pillars and stuff still around.
Reactions: trollmeat and Ben_S

So finals eventually let go of their choke-hold on my free time, so here's some updates form the coldest hive.

The old manufactorium has finally been finished: 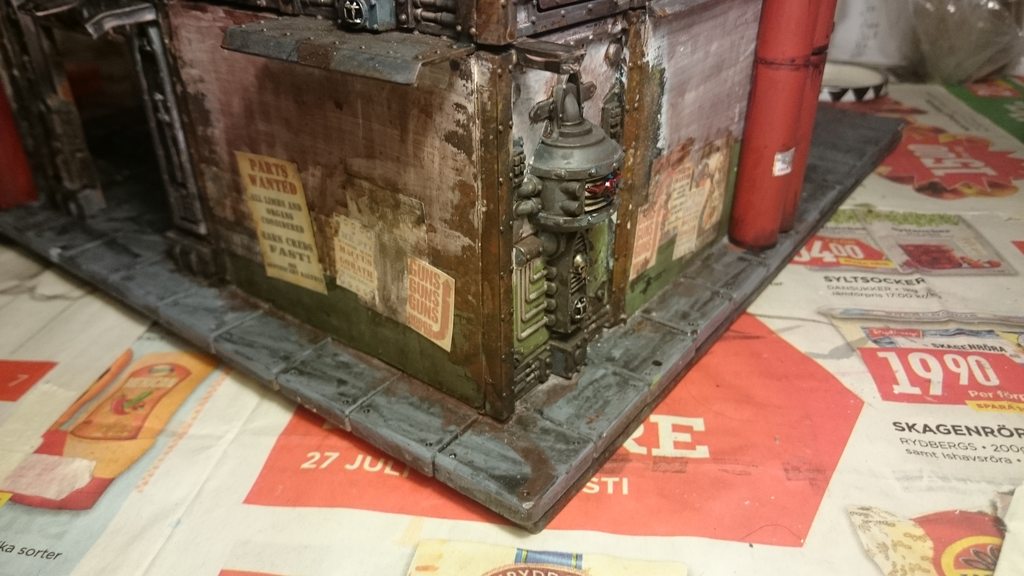 Some posters have been added, really. Oh, and some details has been added. 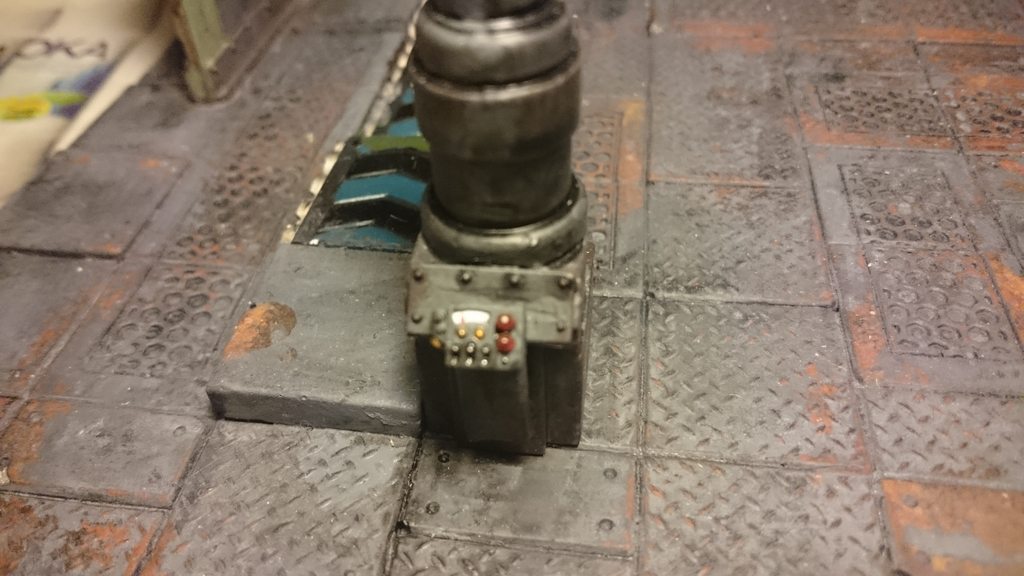 Here's a machine thingy made from an old broken Basilisk cannon. That, and a bit of controls to the conveyor belt. 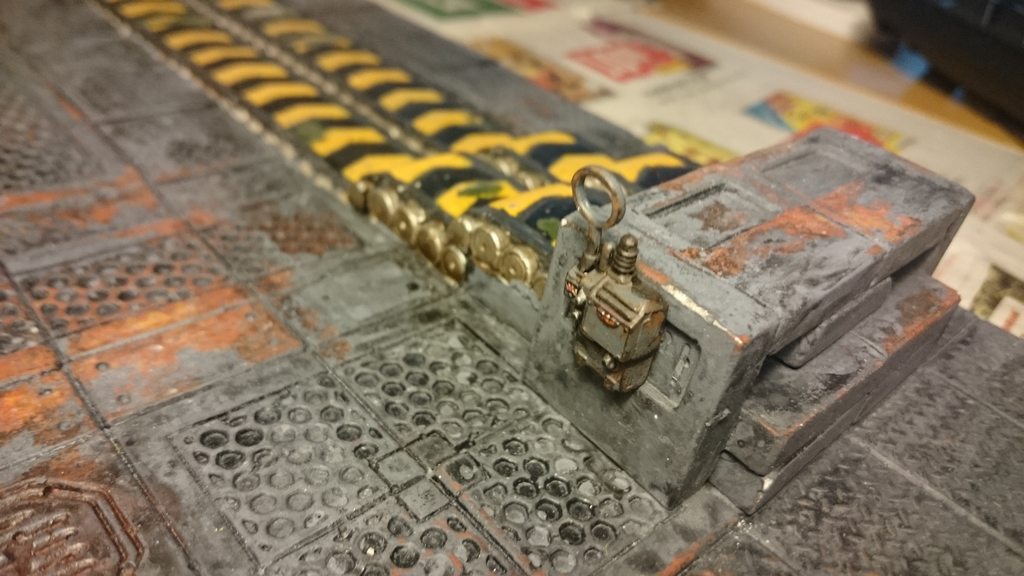 On top of that, we return to our friend, the humble walkway. Because Necromunda would be silly, and frankly pretty boring, without them.
Had to get some supplies from the local scale train modelling shop, though. Had some steel wire and mesh around the house, though. 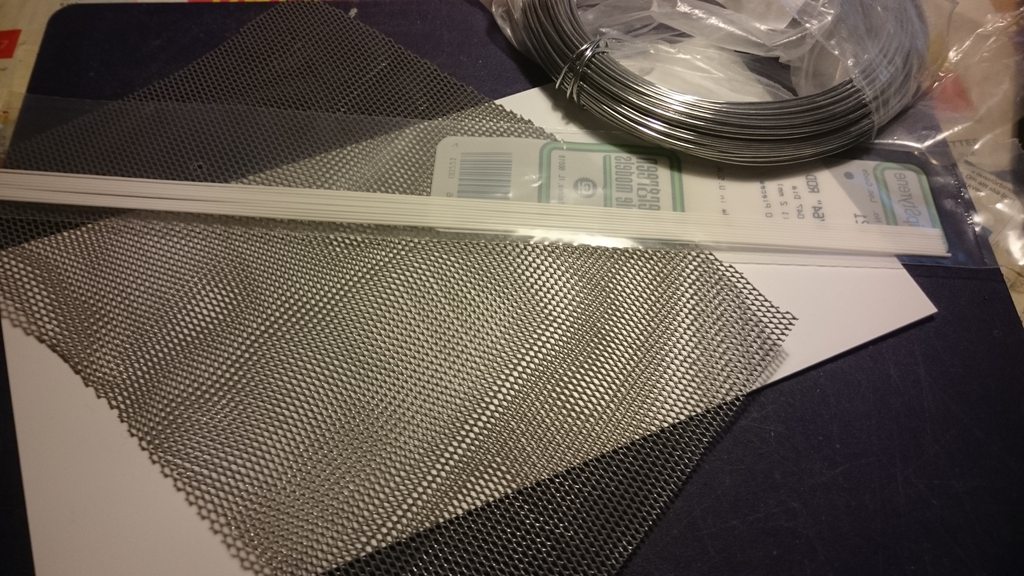 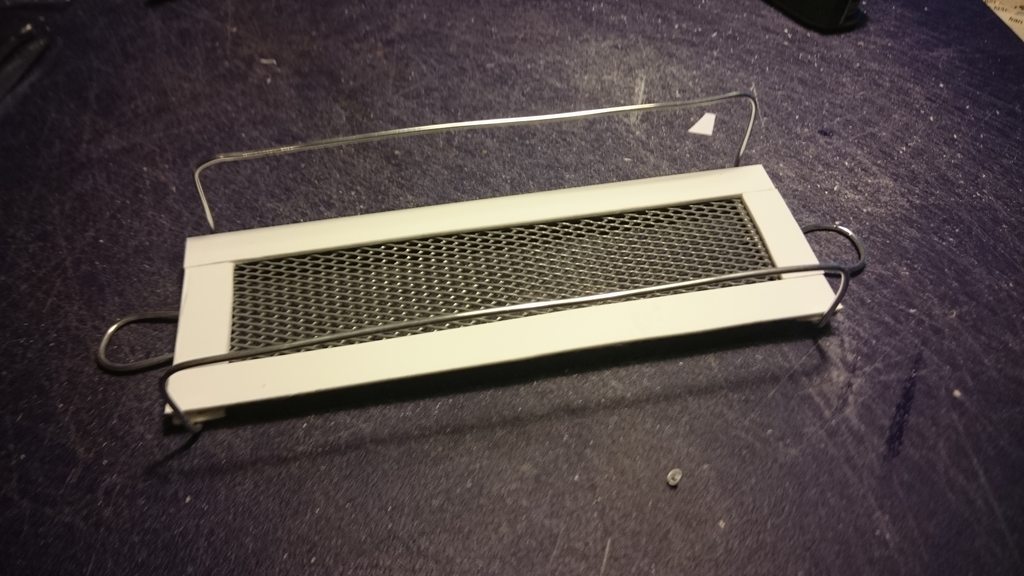 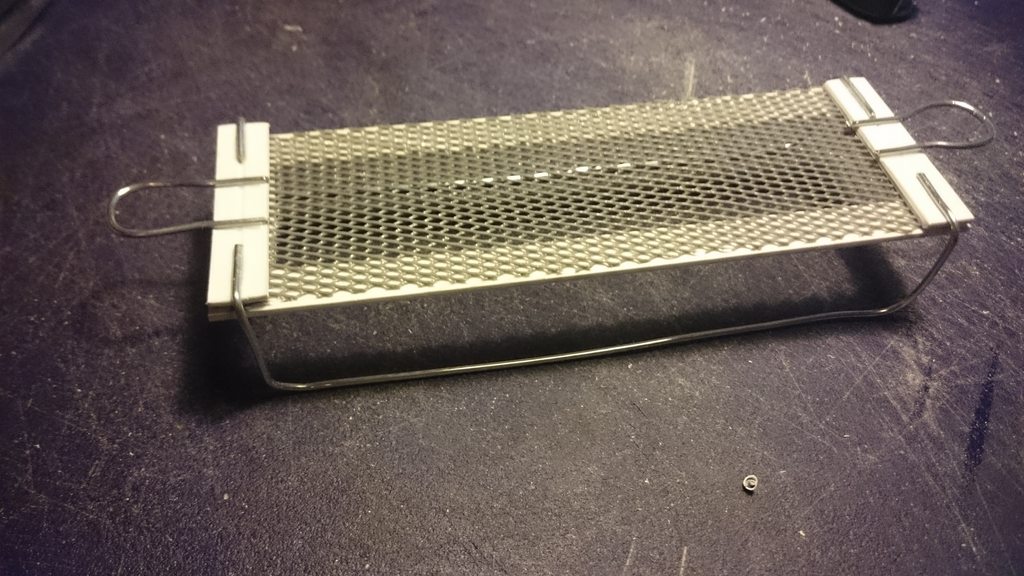 The railing will probably need to be beefed up a bit, though.

And, because I can't stick to a single project at one time, here's a juve and ganger, currently held by blu-tack: 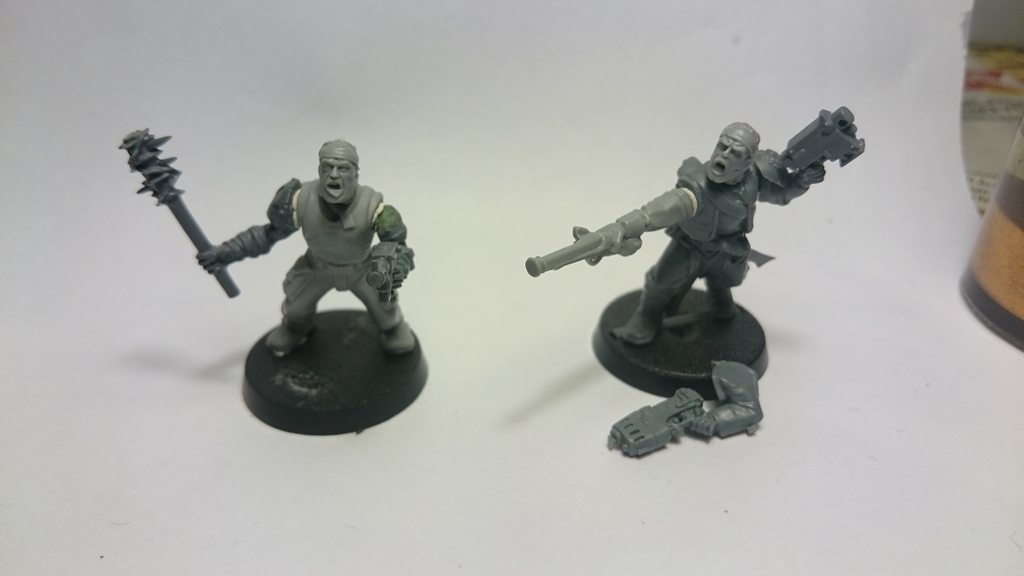 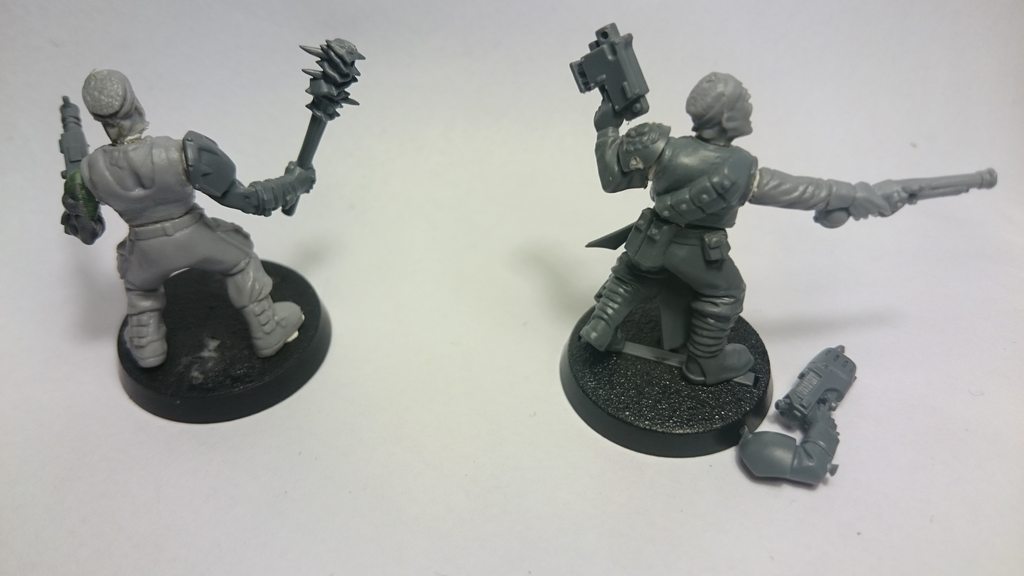 Still unsure if I want to keep the sloped pistol grip on the old Empire pistol or if it'd look better with the regular plasma pistol hand.
Reactions: Corporal Chaos, Nuttowntau, Mutant Modifier and 6 others

amazing mate, are those hook pieces at the ends of the walkway enough to keep it stable?

spafe said:
amazing mate, are those hook pieces at the ends of the walkway enough to keep it stable?
Click to expand...

I hope so. Otherwise, I'll cut them at the top of the loop and bend them outward to a pair of wider supports. The wonders of steel wire.
Reactions: spafe

The empire pistol looks.... Strange to say the least. I could see it working with some sort of scope to bring it into the 40k universe, but wysiwyg is a thing.
Reactions: Ben_S

Bloodbaron said:
The empire pistol looks.... Strange to say the least. I could see it working with some sort of scope to bring it into the 40k universe, but wysiwyg is a thing.
Click to expand...

Yeah, after trying to draw up some kind of mock-up for the slanted-handle plasma pistol, I concluded it's way too difficult. So, instead, I'm gonna cut him of at the wrist and stick the ordinary Plasma pistol hand on there. I've also looted an arm to steal just the cuff from, so I get both sleeves to match.

Also, despite having way too much to do, I've managed to do some things. 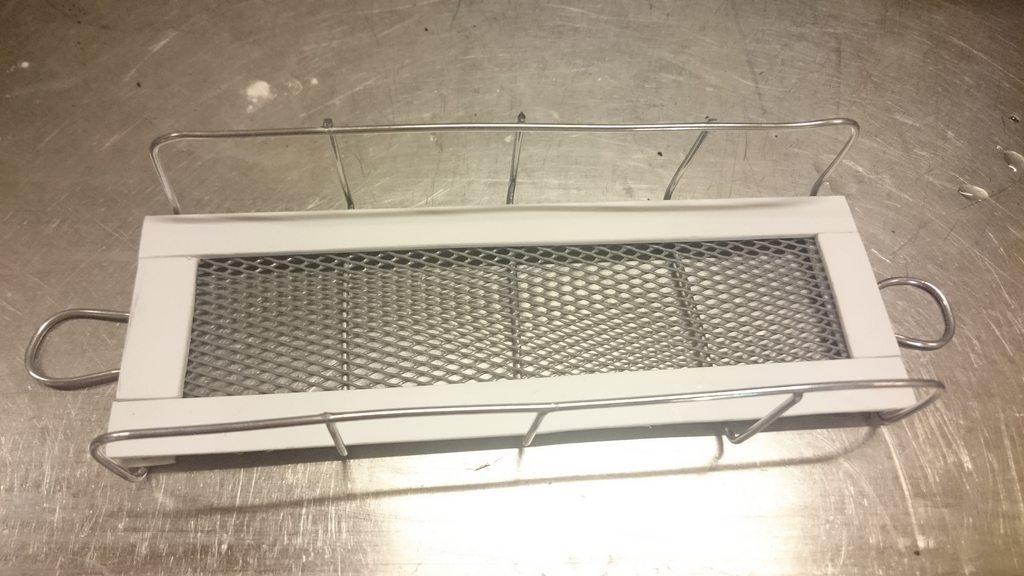 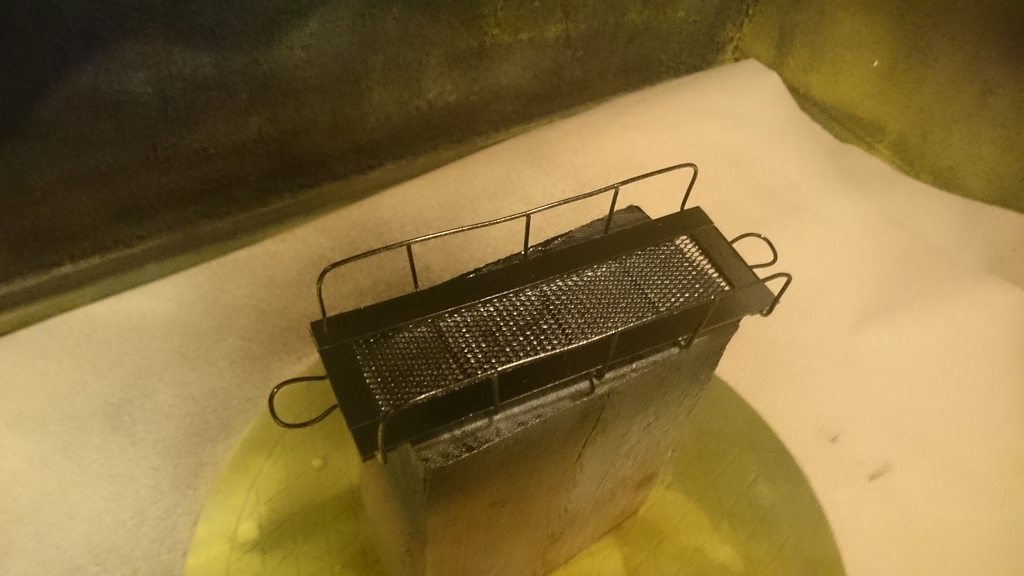 Beefed up the handrails, and sprayed it all black. There's gonna go some rust paint on it, and then hairspray weathering. I've actually managed this, but I have no picture of just it, only of it in use: 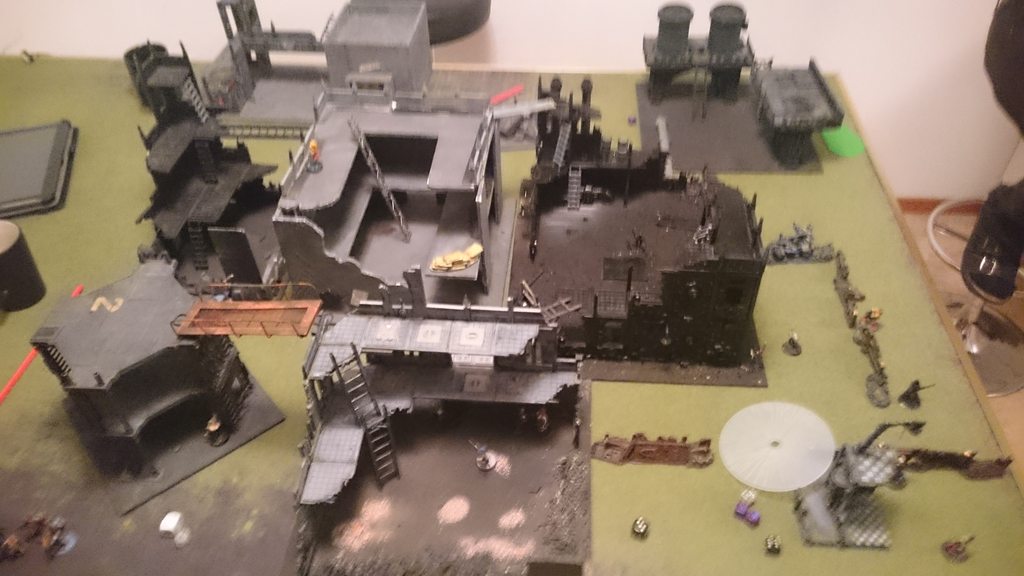 Image is a lot blurrier than I originally thought (I blame the lighting), here's a shot of a battle of my Black Oaks versus The Queens of Noise, a crazy-scary Escher gang owned by the dude whose foot is visible on the top left. The walkway, with finished rust paint, is visible in use to the left.

I should be able to take some time to paint next week, assuming things don't go ploin-shaped with the control systems course. I'm just glad somebody pops in here and looks at my humble attempts.
Reactions: Corporal Chaos, Edster, Mutant Modifier and 6 others

I do care about who I shoot first....have my own threathlist....

After some hiatus due to having way too much work at university, I return with updates. Not much, but something. 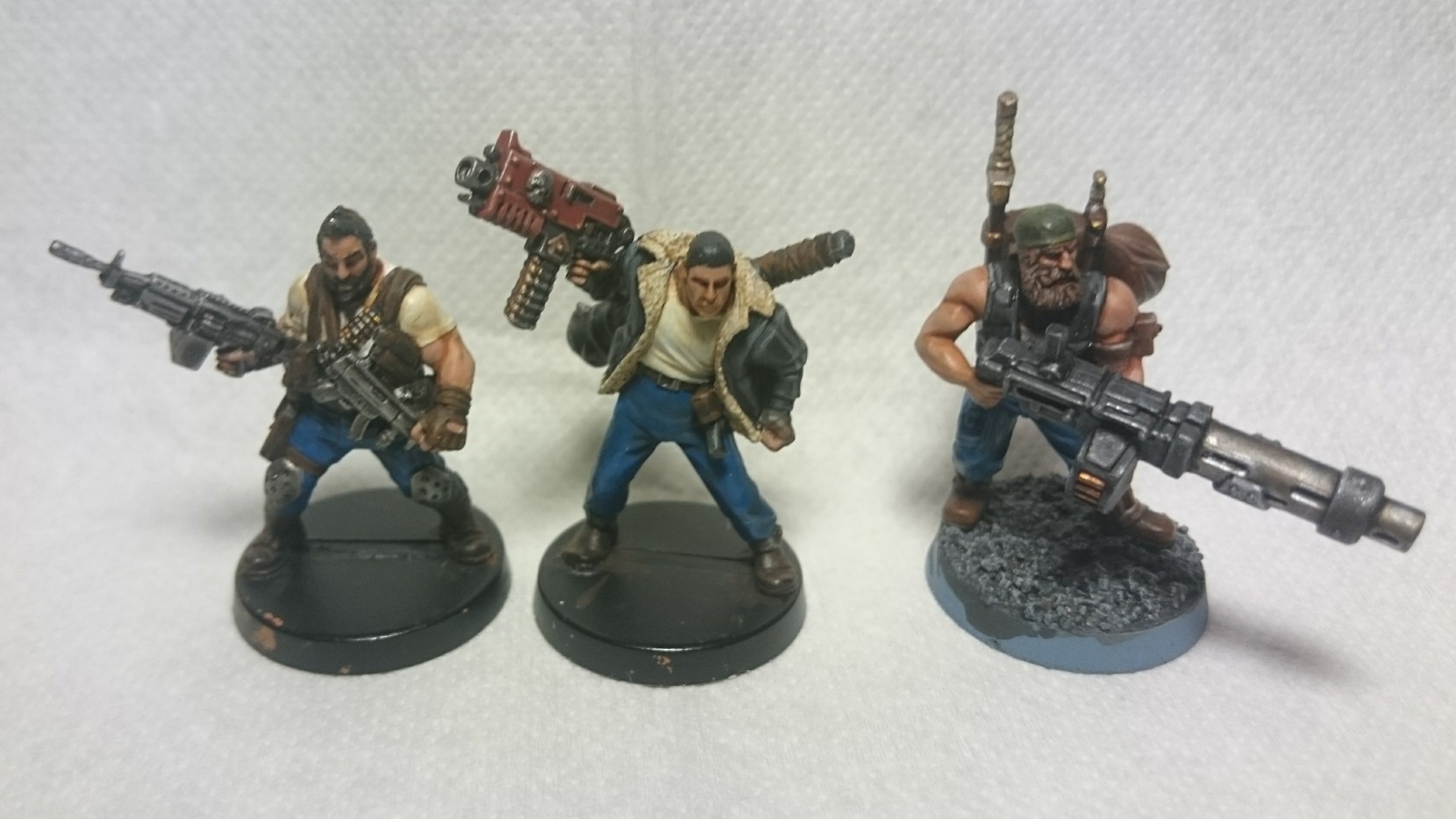 Here they are, the big three of the gang. Matrix, to the right, got himself a base, and I got some highlights done on Mini and Slate. I've still got hair to do on both of those, though. 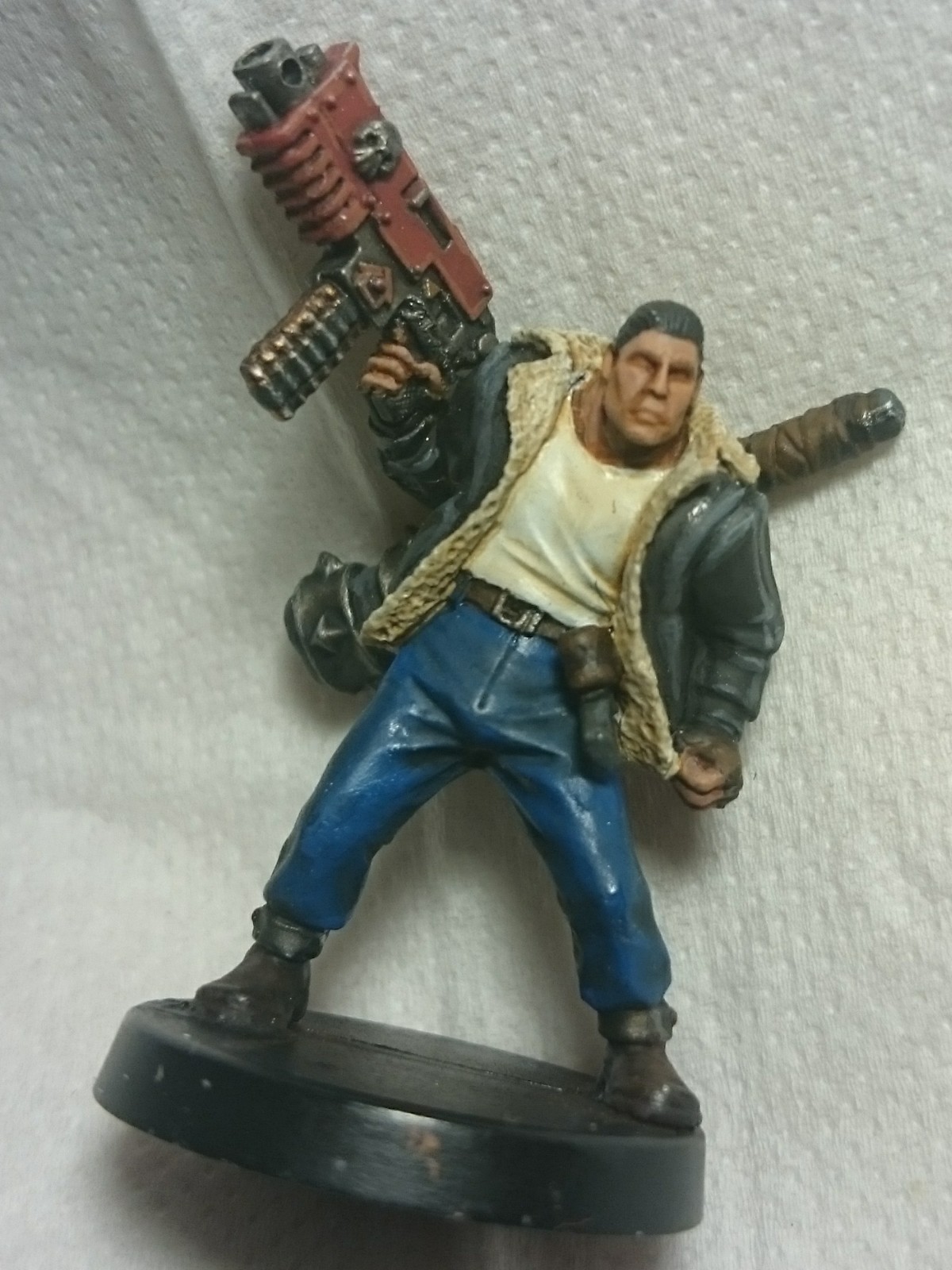 Here's a better closeup of Slate, who's had the most improvement.

I'll get some more pictures done after I finish the two other WIPs I've been working on.
Reactions: Corporal Chaos, hpm60, CaptainDangerous and 6 others

Managed to finish up Slate during the day. 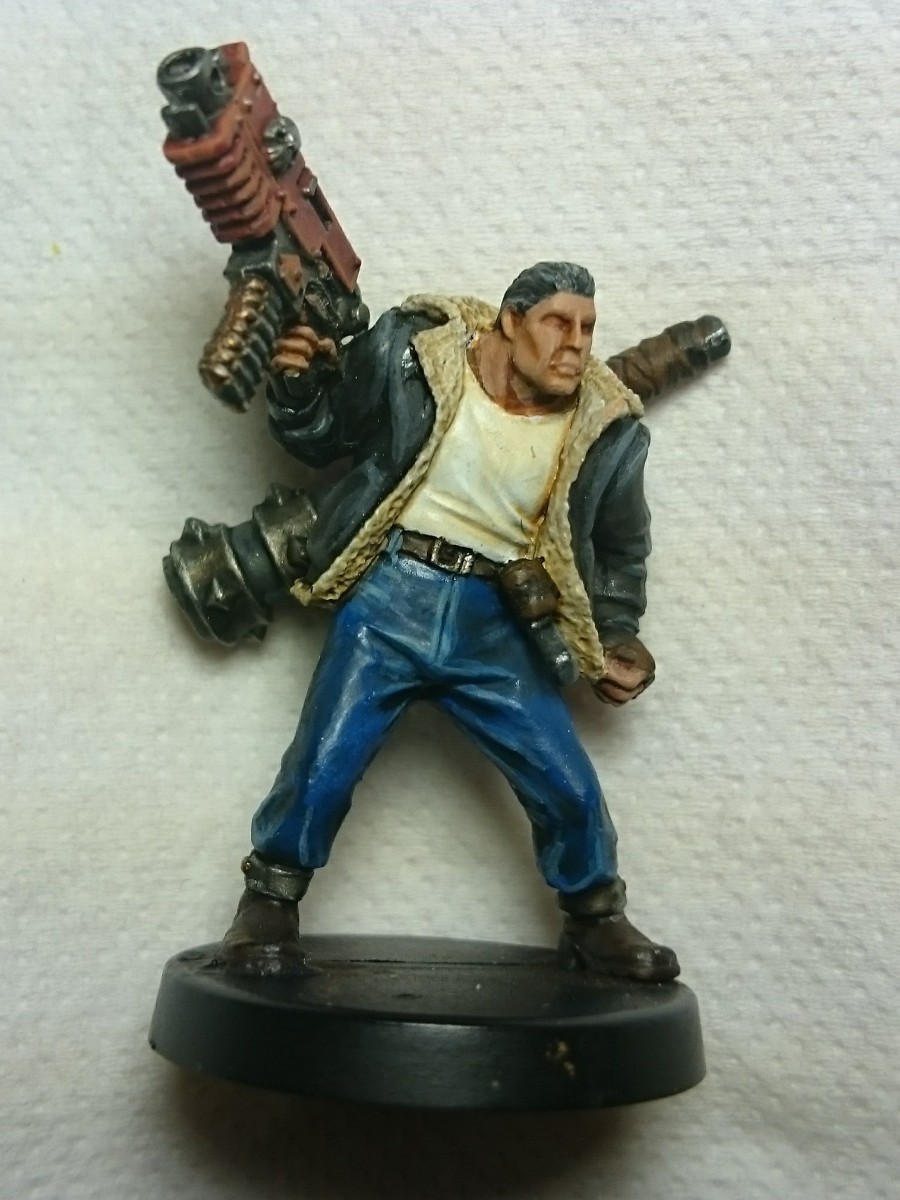 The setup is a bit smaller than usual, but cozy. 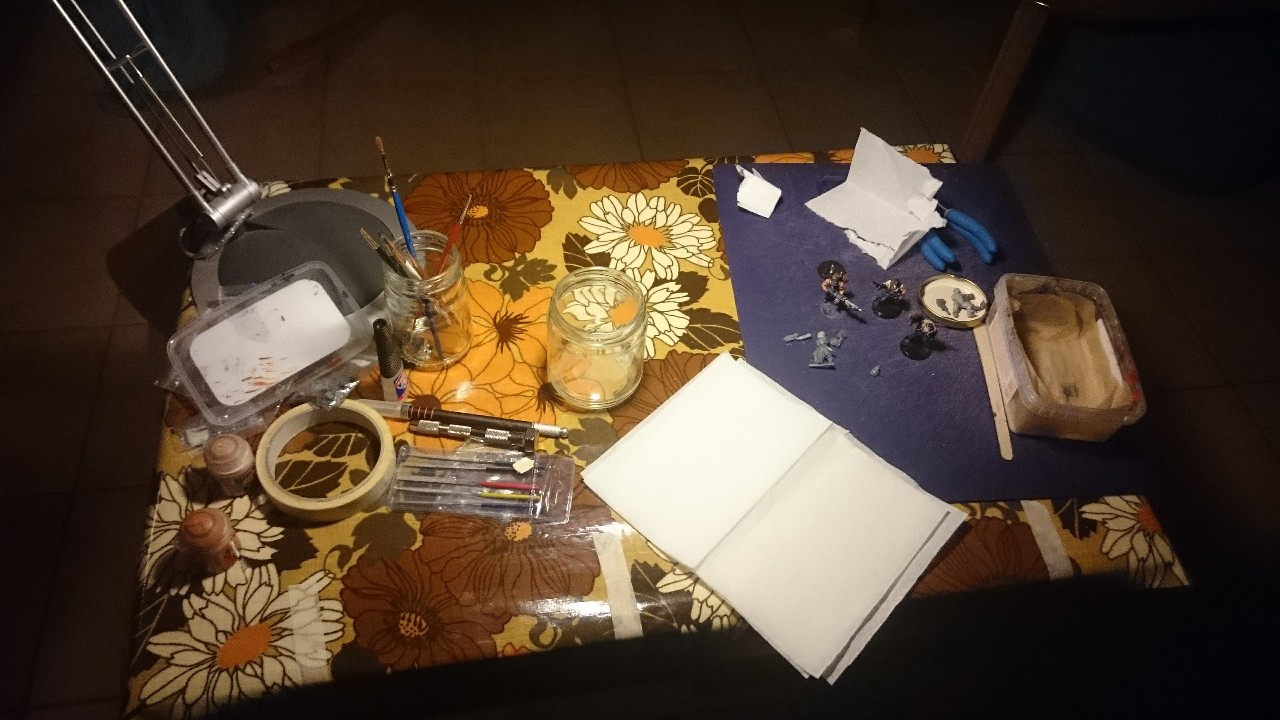 Now just to worry about spray primimg my next few projects while I'm here, considering the cold.
Reactions: CaptainDangerous, Mad Sergeant, catweazle77 and 2 others

Finished two more Orlocks. Sort of finished, anyway. Need to finish the plasma pistol and base. 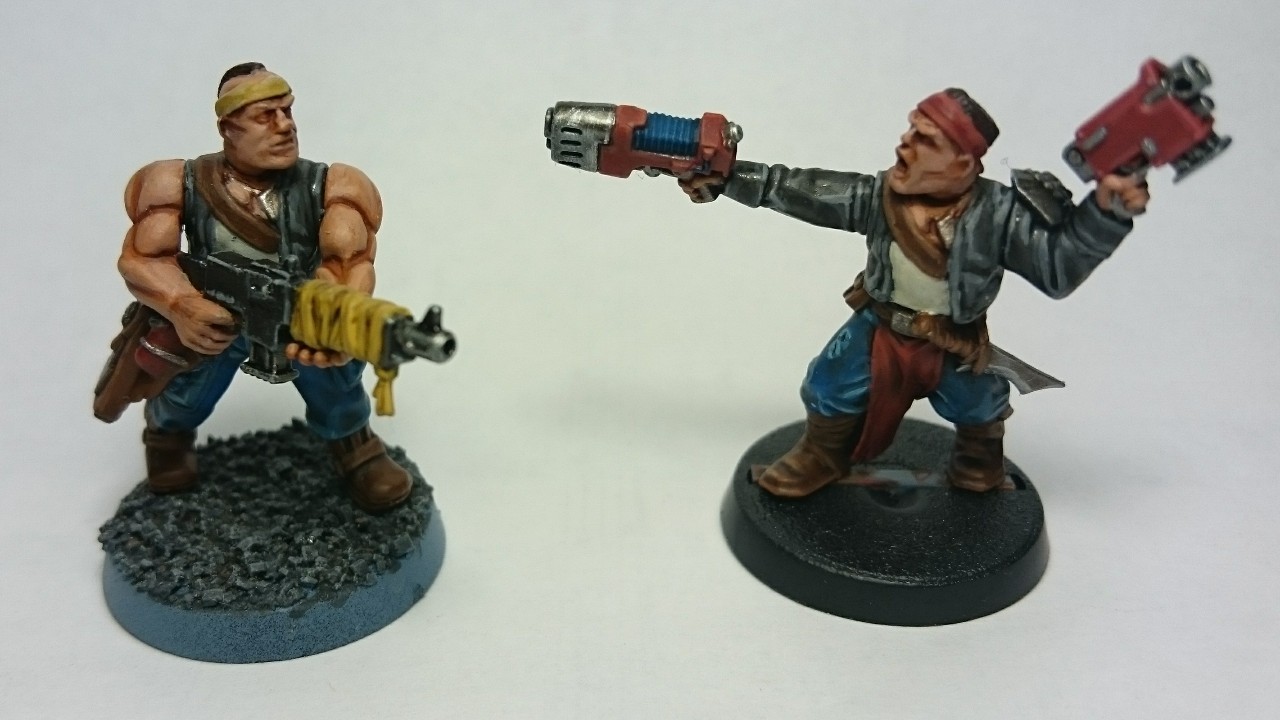