The Glorious Meatcakes at Revelation’s Steeple (ended, just some pics and stories)

This is the fluff I wrote for the campaign “Revelation’s Steeple”, about my Goliath gang “The Glorious Meatcakes”. Random pics included.


The Glorious Meatcakes are a Goliath splinter faction that takes genetic manipulation to a whole new level of fanaticism. Their belief is that they can save all of humanity by sharing their dna and strength, to this end they seek brave new genetic materials from all across the Hive, attempting to improve and perfect their advanced Genesmithing techniques.

For those who willingly join the cause they offer numerous post-birth supplements, muscle grafting, and the latest most fancy biosurgical enhancements. No matter how puny new recruits are to begin with, they will end up being Glorious Meatcakes. If you want to upgrade yourself to become a Glorious Meatcake, head on down to their new turf The Glory Hole, in Revelation’s Steeple. The Glorious Meatcakes want you and/or your meats!

...though, there are whispers that those who do not “volunteer” to join them in their augmentation addiction are spliced up for organs or secreted away and implanted with multiple bioadaptive embryos, which extract the “best traits” from their unfortunate host before erupting from their stomachs. Most people believe these rumours are direct result of Vatborns struggling to comprehend basic human reproduction, despite their Natborn brethren teaching them about the “birbs and beez”.
***

Lead by the prime specimen Mr Macho Himself, with his trusty missile-man Clarke (aka Superman) by his side, The Glorious Meatcakes quickly became renowned. The main reason for this, however, was the uncontrollable and nigh on unstoppable Stimmer known only as “Juice”, who often tore through multiple enemy fighters swinging his excessively oversized barbells.
Casualties were few and far between, other than the notable disappearance of Hernia, a lowly forge born juve, after having injuries tended to by a rogue doc, and Lefty who fell victim to some face stealing Delaques.

***
Clarke (aka Superman) gets an upgrade. 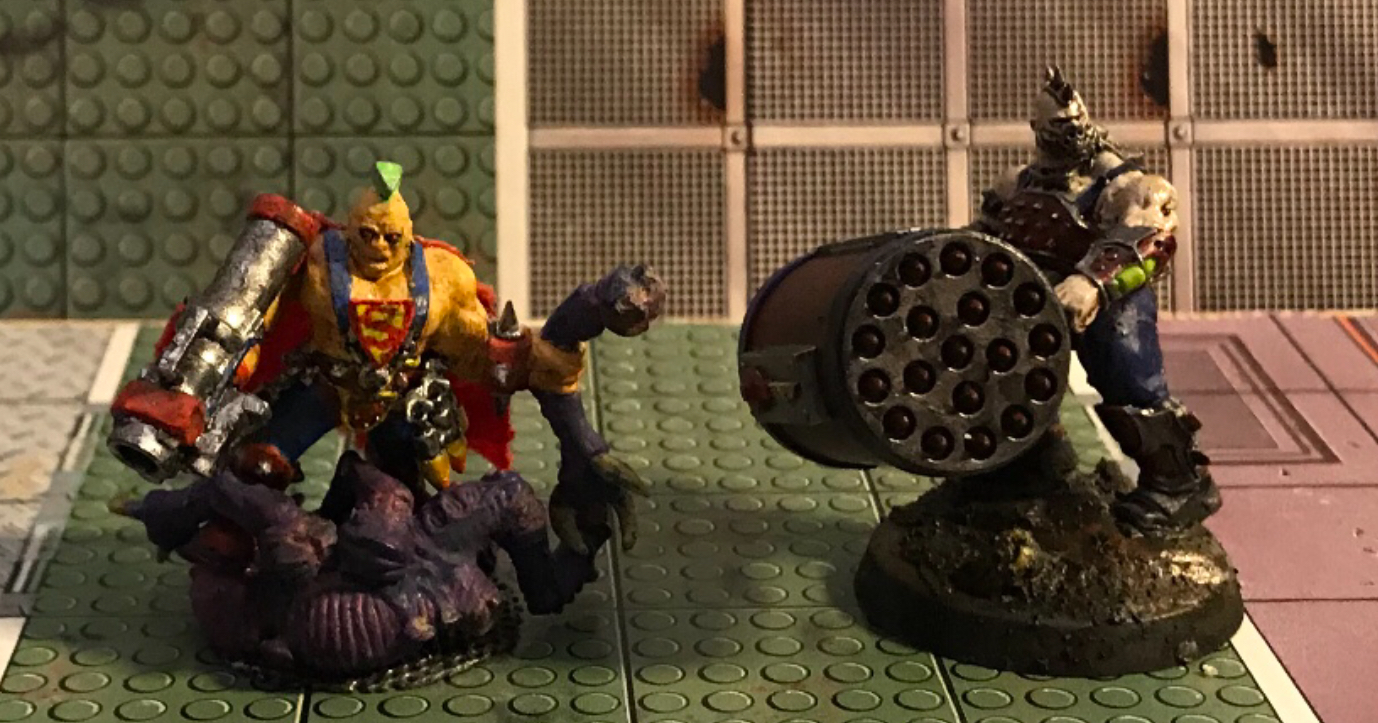 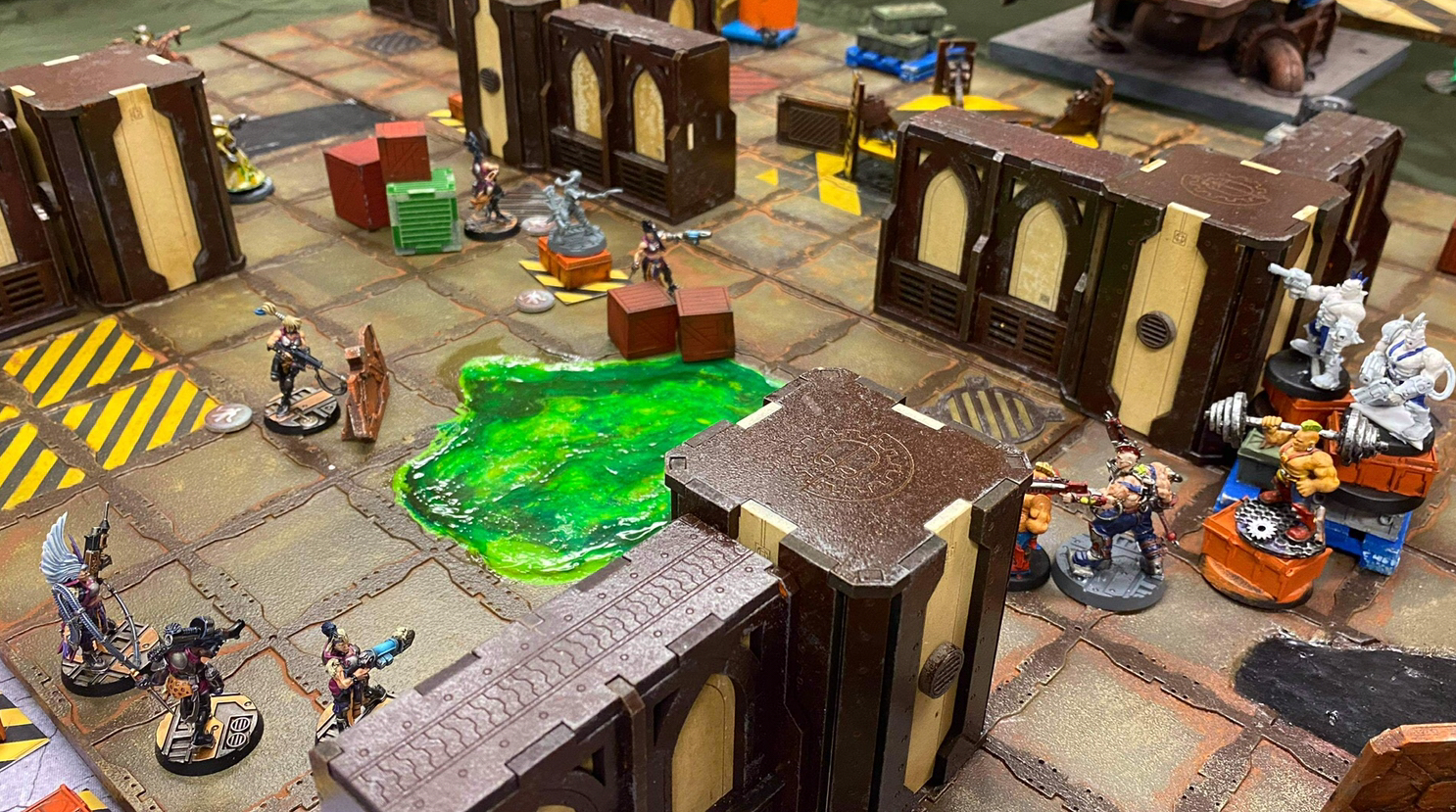 They were forming a meat wall to protect the important characters, as they moved towards the toll bridge, but all hell broke loose and Juice, the seemingly invulnerable Stimmer, ended up squishing a fair few Delaques.

In their pursuit of perfecting Genesmithing, The Glorious Meatcakes have sampled the best traits from any and all unfortunate enough to be in their path as they venture further downhive and away from those who frown upon their unscrupulous activities.

Their experimentation, while they seem to think has had great benefits, is not entirely with its downsides. One example of this is that the last few generations of Vatborns seem to have been getting paler, which is an unappealing trait belonging in House Delaque and has required a much more liberal application of bronzers and many hours under tanning beds.

Another unexpected side effect, is that some of their Vatborn have started to sprout an extra arm or two. Usually mutations are weeded out early on in the cloning process, but The Glorious Meatcakes seem unusually pleased with these results and even started to praise them as the next step in human evolution.
More limbs means more muscles, and more muscle is more human, right?

In their very first skirmish, they ran into two other gangs. One looked like some barely notable generic rabble, and the other was another Goliath gang. While the rabble snuck around the perimeter, Mr Macho Himself felt compelled to prove that The Glorious Meatcakes were truly the Goliath Kings of Revelation Steeple.

Even when offered a truce and a cut of the spoils, Mr Macho Himself could not shake the feeling that he not only had to stop these other Goliaths, that should by right be allies, and protect these seemingly insignificant rabble while they snuck around doing some kind of important and probably nefarious activity.

What unsettled Mr Macho Himself most about this, was that at the time it seemed more important to focus fire on the other Goliaths. For some reason these unknowns felt more like brothers than the Stimkrue ever could. 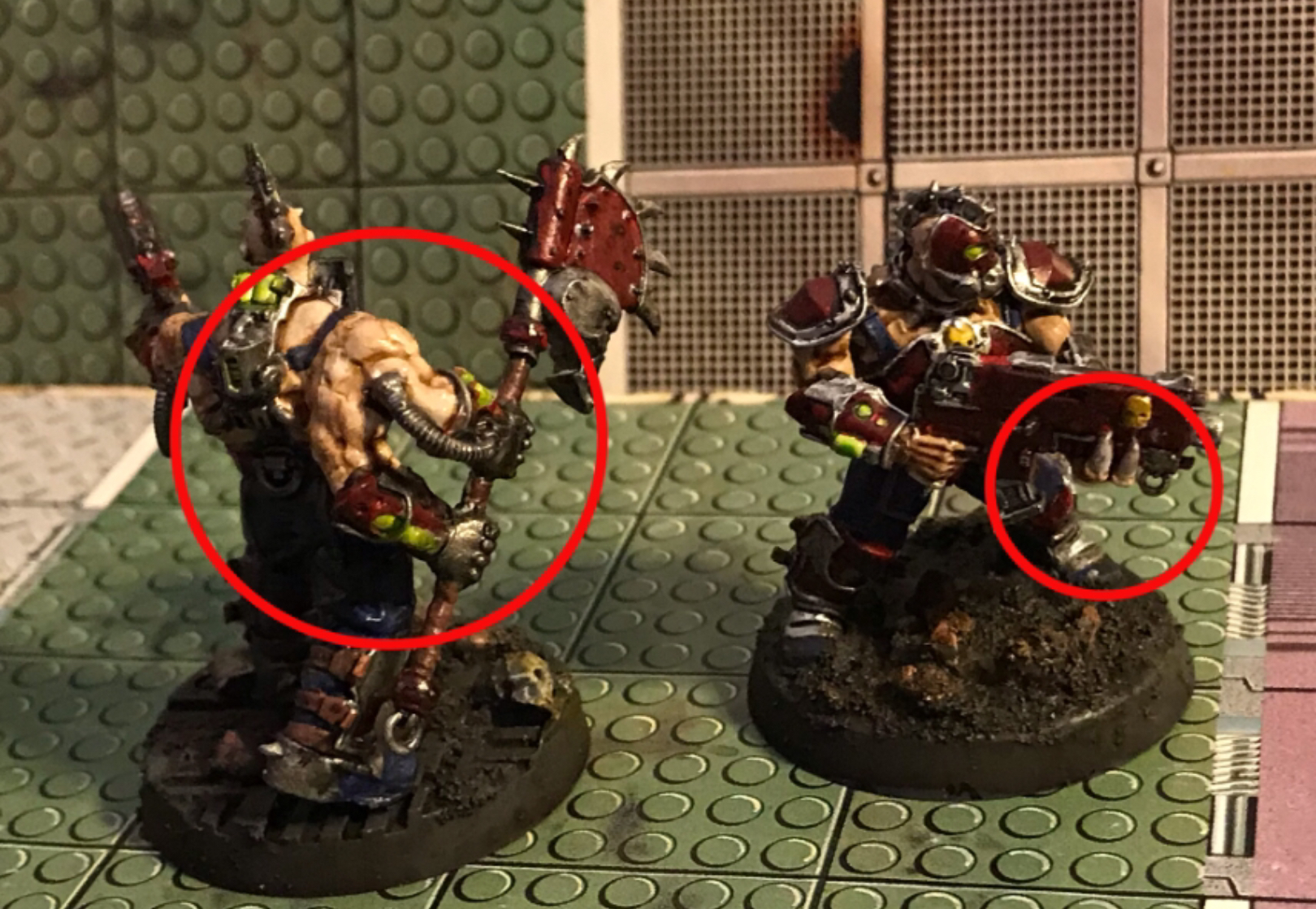 Juice, a Stimmer with no genesmithing upgrades, managed to win the hearts and crush the brains of many foes. Here is a montage of a few of the times he was smacked down (including by the Manticore Legion, which became a sore point). 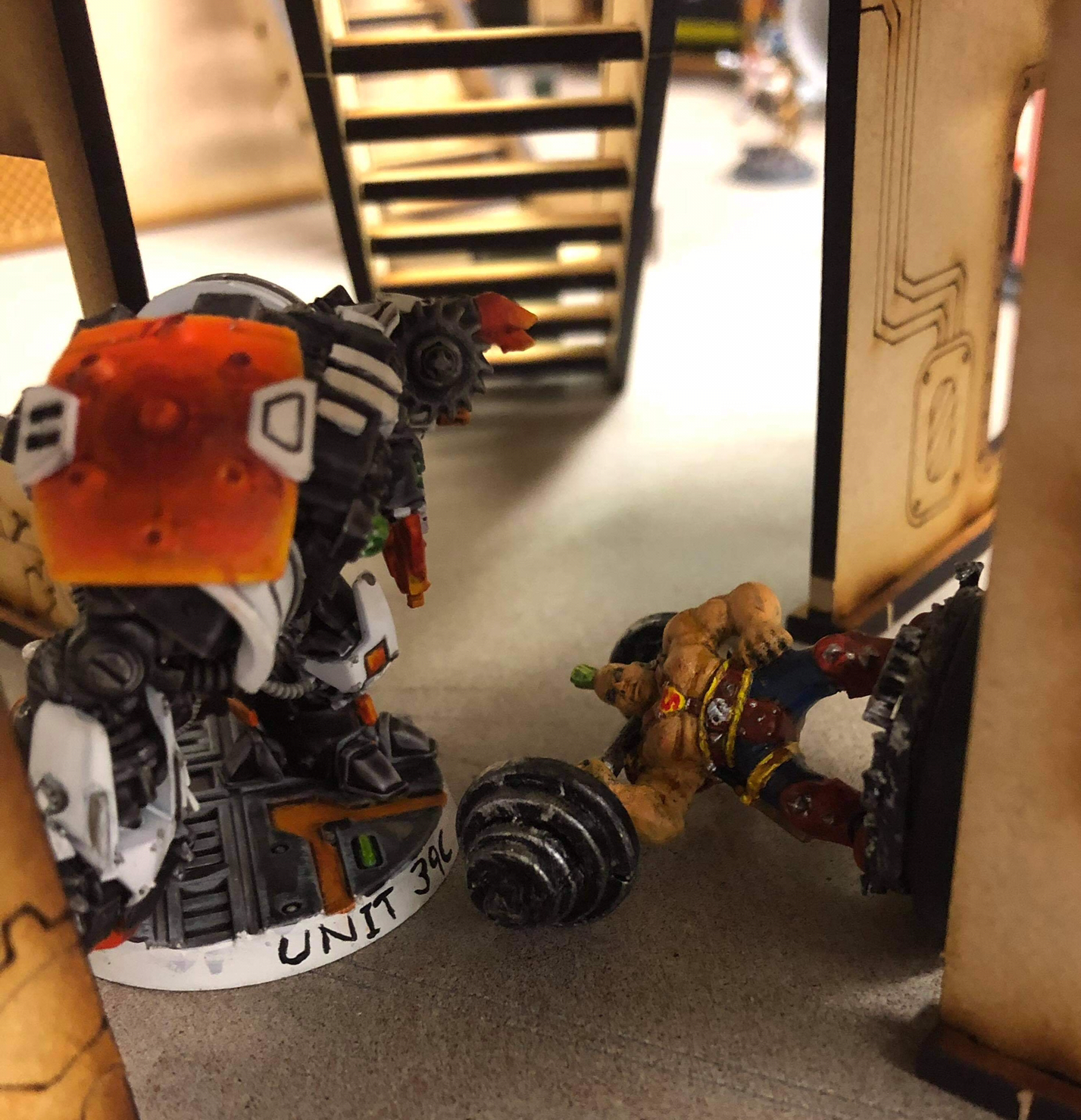 While using an Ambot on Juice, Manticore also Melta’d Mr Macho Himself. 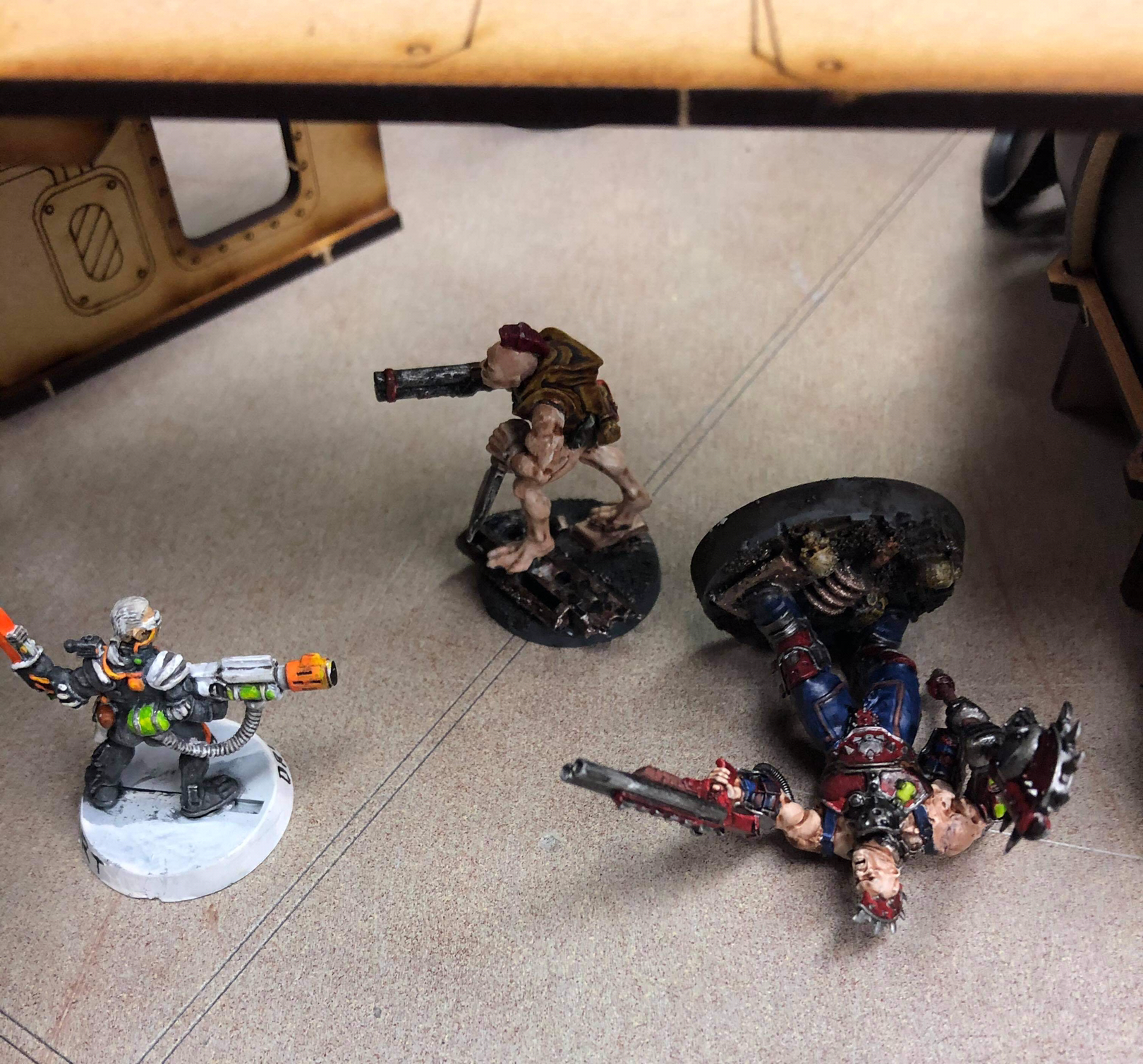 There are many more pics of Juice laying about injured and broken, but this is enough of an example. 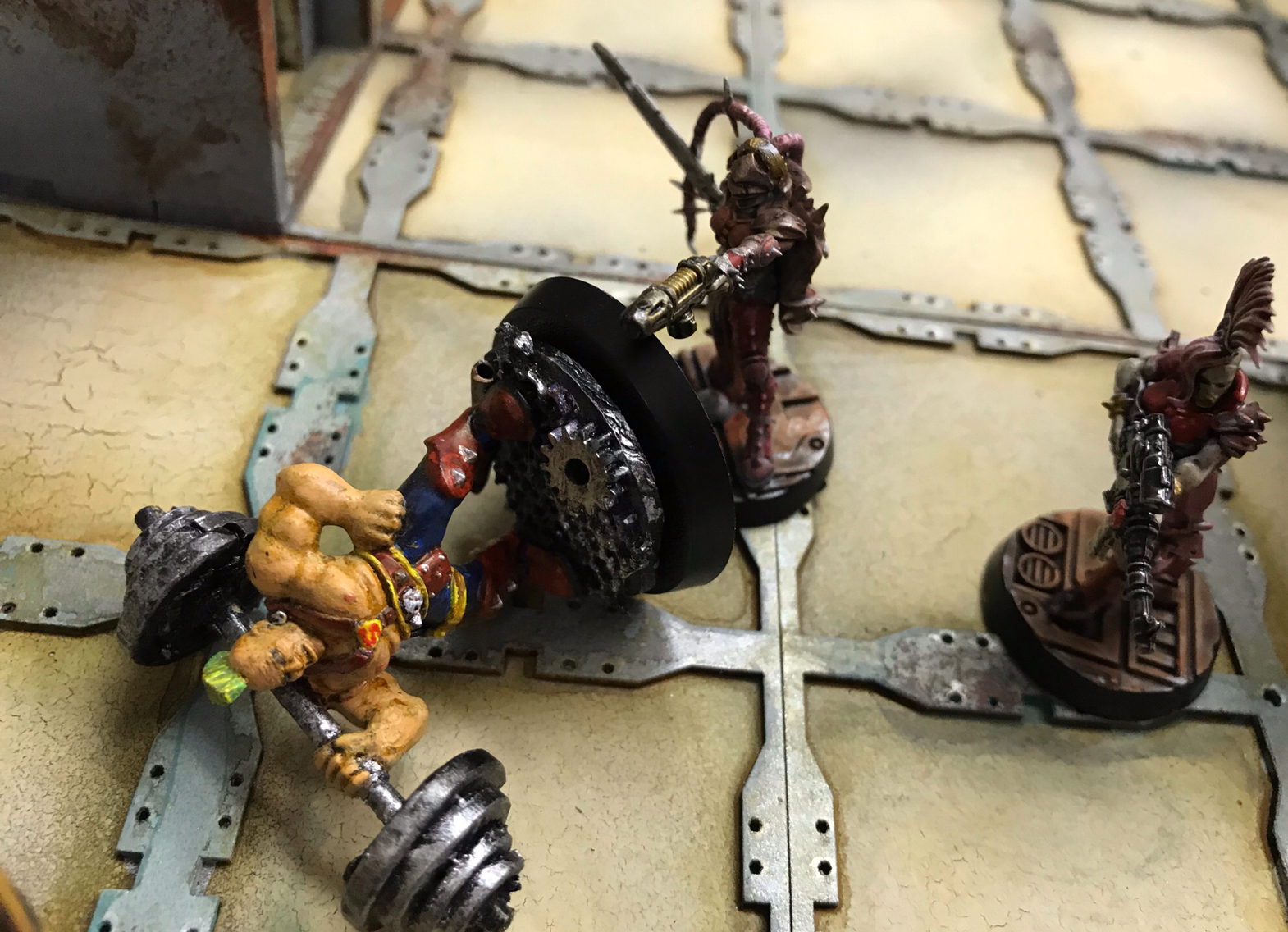 As Juice was exemplary, I was thinking of giving him an upgrade (as I had Clarke), but this concept sketch and mock up is as far as I got. 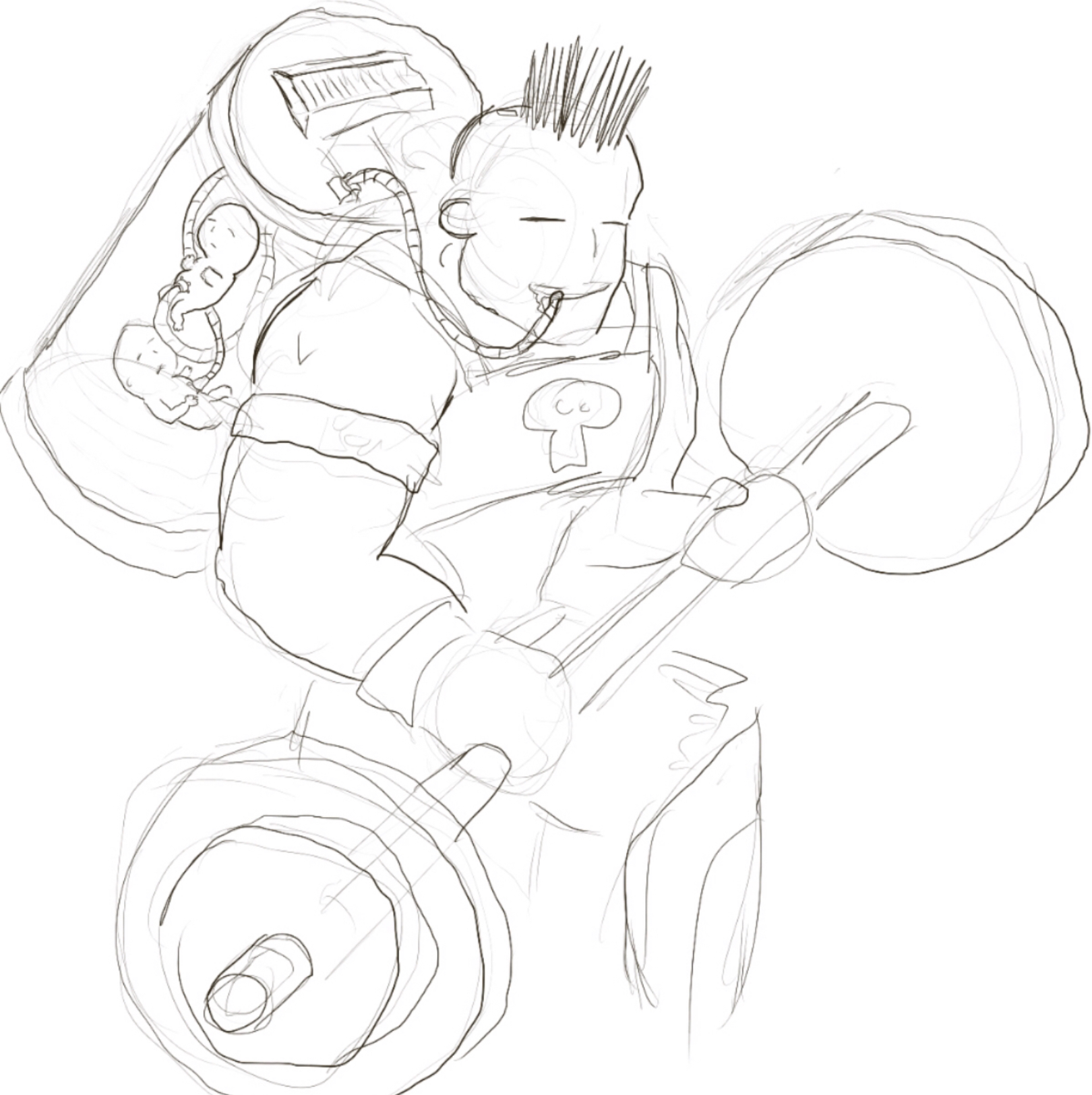 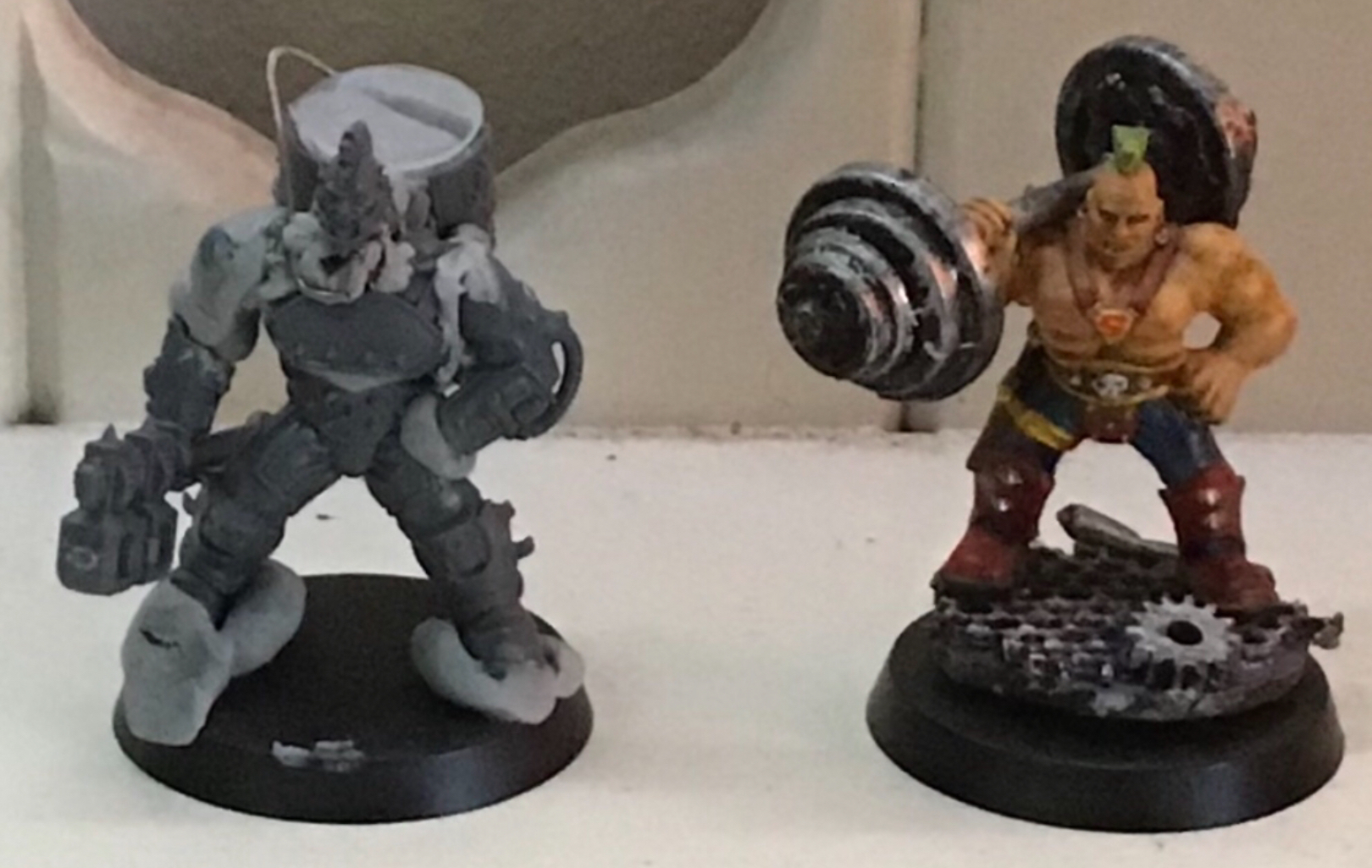 ———
Early in the campaign, one of the other Goliath gangs laid claim to a settlement which they named ‘Roid Town. They lost it before even taking control of it so the Cawdor named it Rat Town. There was an epic battle involving six gangs, 3 Goliath gangs teaming together to try to reclaim it. This is a pic of the leaders gathered before the assault. 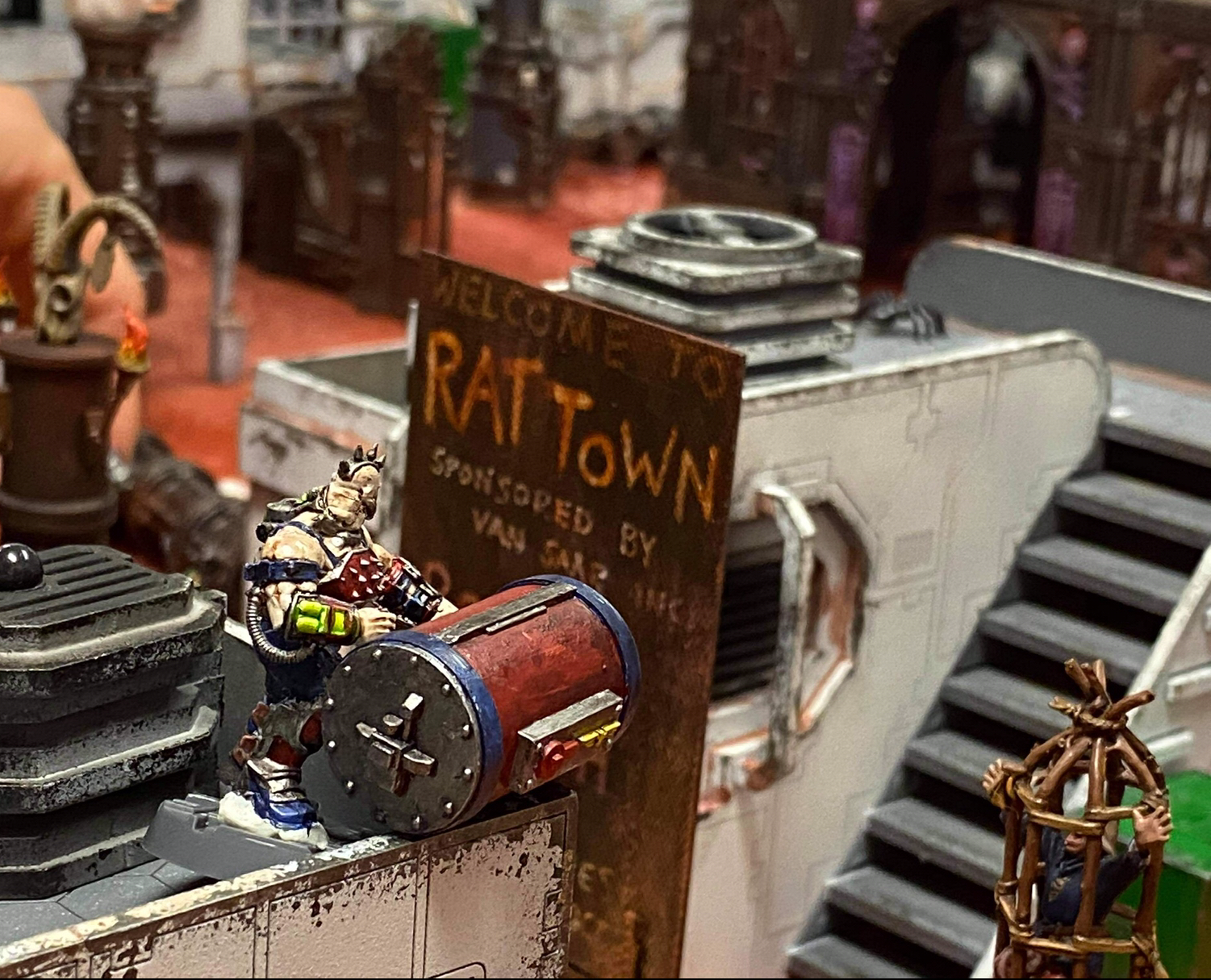 Struggling with the duality of having accidentally incorporated alien DNA into their genesmithing pool, but also enjoying some of its benefits, they continue to push forwards. The alien parts of them whisper in the back of their minds that they need to absorb more and more fresh meats, which was their objective all along...
...how far back does this tainted DNA go? Can they reclaim what is left of their humanity or do they fully embrace what they can and will become?

The other Goliath gangs won’t bow down to Mr Macho Himself and make him King Goliath. Juice is losing what little sanity he had left and regularly charges blindly around corners when he sees his friends taking shots, recently resulting in him screeching to a halt at the feet of a massive tin can that pulverised him leading to Mr Macho Himself eating a melta to the face...

Shaking his head to clear the whispers, Mr Macho Himself looked back at where it all started to come apart. It had to be the failed battle to retake ‘Roid Town, trying to win favours from the other Goliath gangs. The whole thing just wasn’t right, the entire fight he kept thinking he should be turning his weapons to the sides, at his Goliath allies, but despite their being three enemy gangs holding down the fort every single Meatcake focused all their energy on trying to crush the Cawdor and their dirty little rats.

Then it clicked. It was revulsion. Where these filthy rat lovers had embraced the voices that were twisted in their minds, especially their insane leader Zoon, the now Inglorious Meatcakes had been struggling to find an equilibrium, to take the best of both worlds and push aside the tainted whispers that would turn them on their own kind.
...but no more time for contemplations, the evacuation klaxon started blaring. The old videograph blaring orders to grab civilians, citizens and family and to get out. Something big was happening, and, Mr Macho Himself thought, they were telling us to collect some fresh meat for the journey.

***
Note - Zoon and his Cawdor gang had also been genestealer tainted, but neither of us knew the other had

———
At this point the campaign was wrapping up, and the last battles had all players fighting either for good or evil (gsc&chaos combined). Whole bunch of two player battles between the good and evil and the results tallied to find out the fate of Revelations Steeple.


Chaos and Genestealers won, Enforcers and Imperial Fists came to cleanse the area and basically levelled the whole dome complex

Ears ringing and blood dripping from his lips, Mr Macho Himself uttered bitterly “Manticore, it had to be them”. He knew there was something off about them when they had been such difficult adversaries, touting warp tainted weaponry, on their most recent meeting.

Holding up both of his right hands he tried to count the fingers. Everything was blurry. Blinking and shaking his head he slumped back down into the debris, maybe his eyes would clear if he closed them...

He was roused again realising that he was being dragged through rank “water”, he could faintly make out Juice’s voice shouting something. They’d stopped and he was being shaken, opening his eyes he could see that Juice was shouting at him, directly into his face “...they killed LaserShark, man!”

Glaring through still bleary eyes Mr Macho Himself told Juice “I know! Wait!” then focused all of his willpower on clearing his mind and feeling the surrounds. While he was in agony and still new to his powers, he could feel the life forces of his friends blink out one by one as the Imperial Fists and Enforcers relentlessly pressed in on them.

“Only one way out”, Mr Macho Himself stuttered, Juice leaning in closer to catch the words, “...you have to take my chit”. Juice look appalled, and was about to object when Mr Macho continued “...and give it to that guy”.

Mr Macho nodded towards an undersized and cowering Hive Scum, covered in slime from the sewer and dust from the explosions. The scum looked up as Mr Macho said to him “Get my chit to house Goliath, when I have a new body with these memories you will be greatly rewarded. They need to know what I have learned about Manticore, and about ourselves”.

Juice stared eyes wide in disbelief at Mr Macho, grinned and said “Well, ya only got two arms now they’ll totes let you past the blockade”, then his voice took a serious note, “but why trust this scum over me?”

Glancing down at the stump of where his left arm had once been, Mr Macho sighed, “Neither of us are making it out of here alive, but you might be able to hold them back while this two faced little scum squeezes their way out through the pipes.”

Juice was twitching, his stimmplant had been damaged when he dragged Mr Macho down into the drain, and his injuries were causing him more pain than he had ever known. Shaking his head he sombrely said “...but I don’t know how to remove your chit, and I aint got them tools for it neither”

“You’ll just have to take my head. I might be reborn a corrupted slug, but the House needs to know what is happening to the Meatcake clade, and everyone needs to know that Manticore Legion is tainted by chaos and that their archeotech warpgate device has already been taken out of Revelation’s Steeple”

Picking up Mr Macho’s serrated axe, Juice stood over his leader’s crushed, broken, and now headless body. He watched for a moment as the scum clambered through a tiny gap in the rubble, then turned to face the approaching Enforcers. 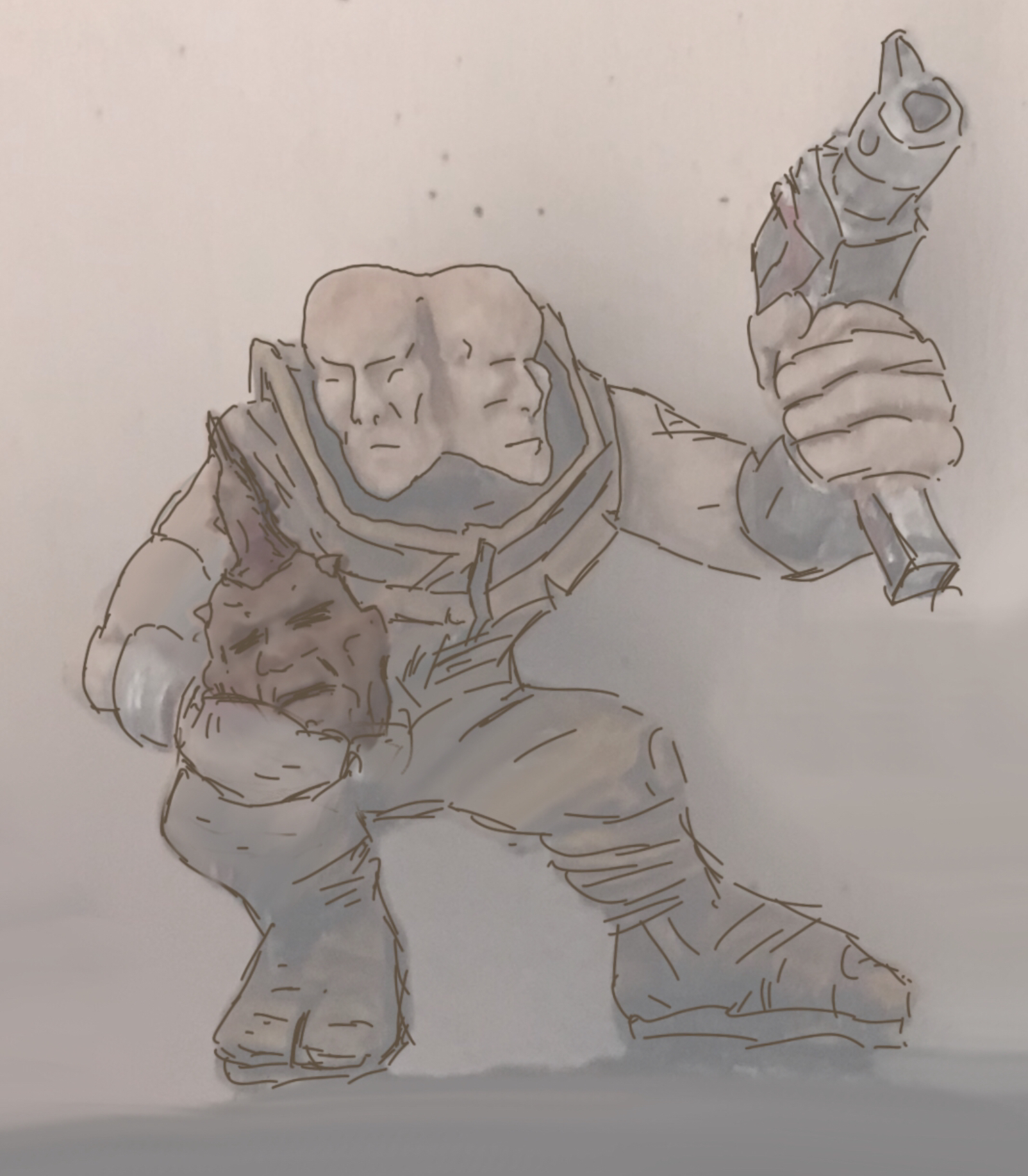