When it comes to everything officially published Exodite has us covered but for everything else it's a bit of a wild west. As time goes on it's increasingly hard to find - lots of the stuff was on GeoCities, for example.

Being the resident crazy person I've decided to try to hunt down whatever I can and try to make it available again. The problem here is I'm trying to do it legally. That means no copying their work without permission. Wherever possible I'm trying to arrange to license things under Creative Commons (this sort of thing). That would mean they could both be freely distributed and also that anyone could build on them. (That probably sounds a bit scary but it's actually pretty straight forward)

Once we're sure about the legal stuff the rules will be given a lick of paint and laid out in the modern tUGS template (as seen in Depiff's Sumfink In Da Sand rules). Oh and released on tUGS and wherever else is interested.

At the moment things are split into four categories: relicensed rules, rules we're still trying to reach the author/s of, orphan works, and lost works. The goal is to get everything into the first category!

Lost works
So what can I do to help?
Firstly, do you know any of the people we're trying to reach? Are you one of them? I can be reached by email or you can post here.

Secondly - what have I missed? I'd already got a folder of this stuff when I started writing this topic and found out about Cheesie's now inactive site before I even finished compiling the list. There's bound to be other stuff out there!

Thirdly - Do you know of any Gorkamorka stuff that isn't in English? Adding that to the collection would be rather fun!

Fourthly (is that a thing?) - Yes, this topic is fairly old, but I've loved Gorkamorka since I was eleven years old back in the late 1990s and I'm not planning to stop any time soon. Go ahead and contact me about this stuff!
Last edited: Dec 31, 2021
Reactions: P1glet, begleysm, JawRippa and 6 others

Great work! I'm looking forward to seeing all of this in Vault!

Sadly, I cannot be of any help to this project, seeing as I got all my Gorkamorka fixes (read pdf's) from your awesome site! I've done some searches for stuff, but I don't think I've actually come across anything that's not on your list.

How about this stuff by Doghouse (one of the first to ever build true scale Space Marines), sort of a 'sequel' to the GorkaMorka/Digganob setting. Besides background it also includes rules for Dredds and Weirdboys.
Reactions: Blood Donor and Flamekebab
T

i have a scenario that i found on the nets a while back, not sure from where, called Da Sacrifice, a mutie scenario. if its not in the collection yet, id be happy to link
Reactions: Ben_S

theslasher99 said:
i have a scenario that i found on the nets a while back, not sure from where, called Da Sacrifice, a mutie scenario. if its not in the collection yet, id be happy to link
Click to expand...

That'd be the one Matt wrote for tUGS. It hasn't been redone in the new template (it's still using the old one), true, but it's readily available on tUGS (check the download section for others) and it's already licensed under Creative Commons (although it's an older license).

Generally the sort of thing this project is aimed at is stuff found on sites like this:
http://web.archive.org/web/20030915...ww.flashback.net/~kharn/gorkamorka/index.html

Lots of the stuff is still available in some obscure archive but I'm trying to contact the authors so they can be re-released.
Reactions: Blood Donor

Scratch another one off!

So that's a couple more new scenarios I had not found before. Thanks, Ben.
Reactions: Aulenback and Flamekebab

I trust you have seen the two bits (one race scenario, one rules for exploding terrain) posted today to the GM Facebook group, from issues of the Citadel Journal?
Reactions: Redsunz2000 and Flamekebab

Aulenback said:
I trust you have seen the two bits (one race scenario, one rules for exploding terrain) posted today to the GM Facebook group, from issues of the Citadel Journal?
Click to expand...

Likely, but you aren't going by Flamekebab over there (heh!).
Reactions: Flamekebab

Aulenback said:
Likely, but you aren't going by Flamekebab over there (heh!).
Click to expand...

I have... opinions about how Facebook handles names. I'm stuck with people calling me "Ben" because Facebook doesn't know how to deal with people who use their surname as their main name (My friends call me "Fox"). Leads to some awkward conversations...

Anyway, those Citadel Journal submissions are tricky as I've no way of tracking down their authors. The stuff that was posted on websites tended to have an email address or a unique username of some sort. Anyone know a James Reichelt who lived in Cheltenham in the late '90s? How about a Neil Campbell, of parts unknown?
Reactions: Aulenback

Switch your 'given name' to 'Mister'? Though then you'll have to put up with Dahl references... [grins].
Reactions: Flamekebab

Aulenback said:
Switch your 'given name' to 'Mister'? Though then you'll have to put up with Dahl references... [grins].
Click to expand...

I don't want to be one of those people that has a deliberately awkward name, I just want people I meet through Facebook to not have a confusing time when they meet my other friends! Technically they support a nickname field but it's shown basically nowhere so it might as well not exist. If it was less hassle I'd get some ID done with a mononym on and send scans to Facebook.

Flamekebab said:
Anyone know a James Reichelt who lived in Cheltenham in the late '90s?
Click to expand...

Thats me!
(guess who was trying to find something with his name attached on Google today)
Reactions: JawRippa, Flamekebab, Punktaku and 1 other person

Jamesalone said:
Thats me!
(guess who was trying to find something with his name attached on Google today)
Click to expand... 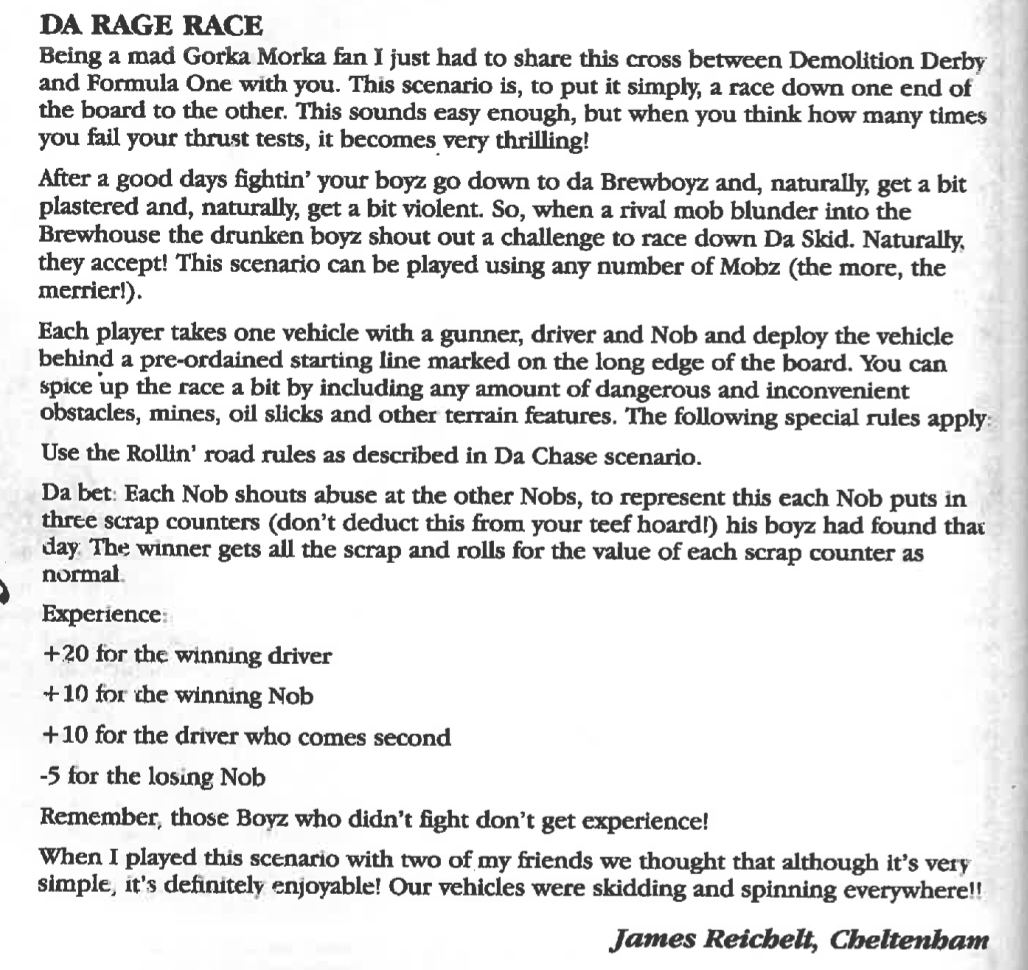 As far as I can tell letters, unlike article contributions, aren't signed over to GW. You up for having your scenario licensed under Creative Commons and re-released, @Jamesalone ?
Reactions: Aulenback

by all means.. I must have been... 14 years old at the time They sent me a copy in the post! (Which I've obviously lost)
Reactions: spafe, Punktaku, Flamekebab and 2 others
L

I'm working on some stuff, I would be happy, nay honoured to have some of it at least reviewed for the book. It includes my hired gunz stats and an alternate setting, a necromunda-like ruined imperial city on one of Angelis' other continents.
Reactions: Flamekebab
L

Making progress on the Tilewayz rules. I'm basically done, although I might think of some things. Here's the current vault link, although I don't think it has been approved yet.
Last edited: Aug 17, 2021
Reactions: Flamekebab

La'ayiv said:
Making progress on the Tilewayz rules. I'm basically done, although I might think of some things. Here's the current vault link, although I don't think it has been approved yet.
Click to expand...

Interesting stuff! Would you mind picking a CC licence for the rule set?
Show hidden low quality content
You must log in or register to reply here.

S
What major problems exist in each edition?