CaptainDangerous said:
Hey drew25a!
I won’t be able to make next Tuesday but I’ll definately have a look down sometime!
....even if it’s just to give @Patch the evils for not inviting us sooner....
View attachment 89691

In his defence tho, he did mention your group ...and besides, I don’t think I could stay mad at someone so pretty!

I would also like to return the offer and if any of the raiders fancy a try at frost grave in the next few months they are very welcome to join our painfully slow efforts at learning the game!

My humble apologies el Capitano - I thought you guys had all but wrapped in on N17! x
Reactions: CaptainDangerous

Cheers drew25a!
Really looking forward to meeting more of my wargaming kinsfolk!
Does my gang need to be registered or will it be a more relaxed, jump in and out, kind of campaign? And also, are there any restrictions on starting gangs or is it just regular 1k credit set up?

Hey patch!
We totally had! (Personally I blame the awful release rather than the actual game, but that’s a topic in itself!) but we had a great time last year playing gaslands, afew big games of 40k, and ended the year with a six game blood bowl tournament - The Grim Dark Cup! (Note to self: finish the report!)

Unfortunately we havnt had a game of anything since, but hopefully @Ardavion has thrown some henchmen together for tomorrow?
If our paths cross at the raiders I would very much like to have a rematch against you! (It was great fun playing intentionally bad an letting you win last time)
(....and the time before that)

Unfortunately @CaptainDangerous it is a double whammy of not having made any henchmen (FG, I assume - although they are on my to do list - and I'm looking at putting together and painting my wizard and apprentice as a minimum this week towards the FYSC) and being on late shift this week so I'd not finish until 8pm, so I'll not be turning up tomorrow.
Reactions: CaptainDangerous
D

CaptainDangerous said:
Cheers drew25a!
Really looking forward to meeting more of my wargaming kinsfolk!
Does my gang need to be registered or will it be a more relaxed, jump in and out, kind of campaign? And also, are there any restrictions on starting gangs or is it just regular 1k credit set up?
Click to expand...

It’s 1k set up. And I’m using the dominion campaign rules for the first one. So if you let me know your gang name I can add you
Reactions: CaptainDangerous

A quick note to anyone who might be coming to the pub tonight - I’m going to be at The Raiders club this evening but it would be great to see you there if you fancy coming along?
It starts at 6, is on at Croxdale Community Centre (super easy to find), and is free for your first day.
They have tons of stuff going on, but I’m playing in the necro campaign, hopefully I can bag a territory tonight!?
+pics incoming+
Reactions: Drew25a, MedMos and Ardavion

Week 1:
Beaming into an abandoned workshop, Redshirt Team Alpha are confronted by The Cult of the Enlightened Children! 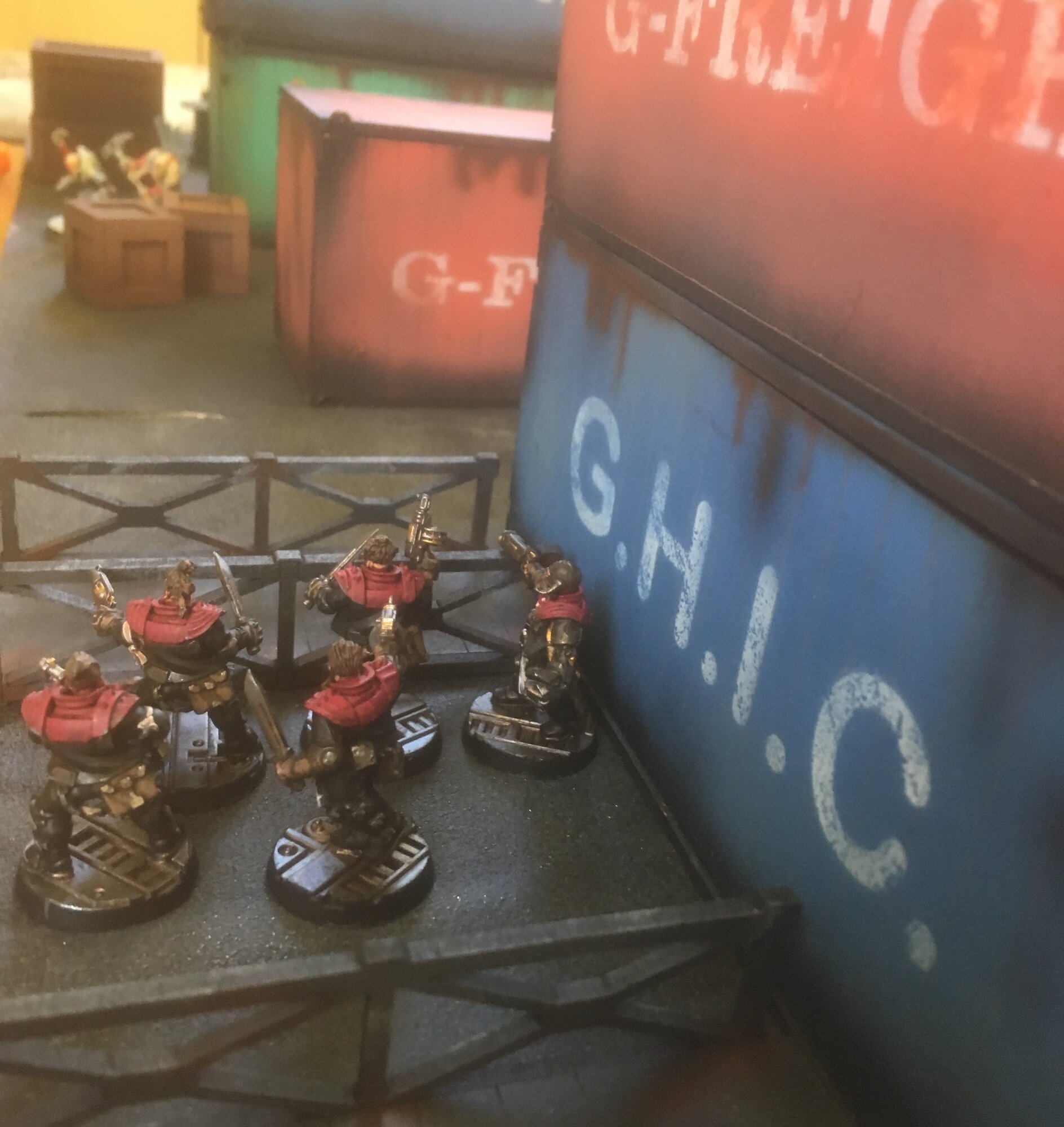 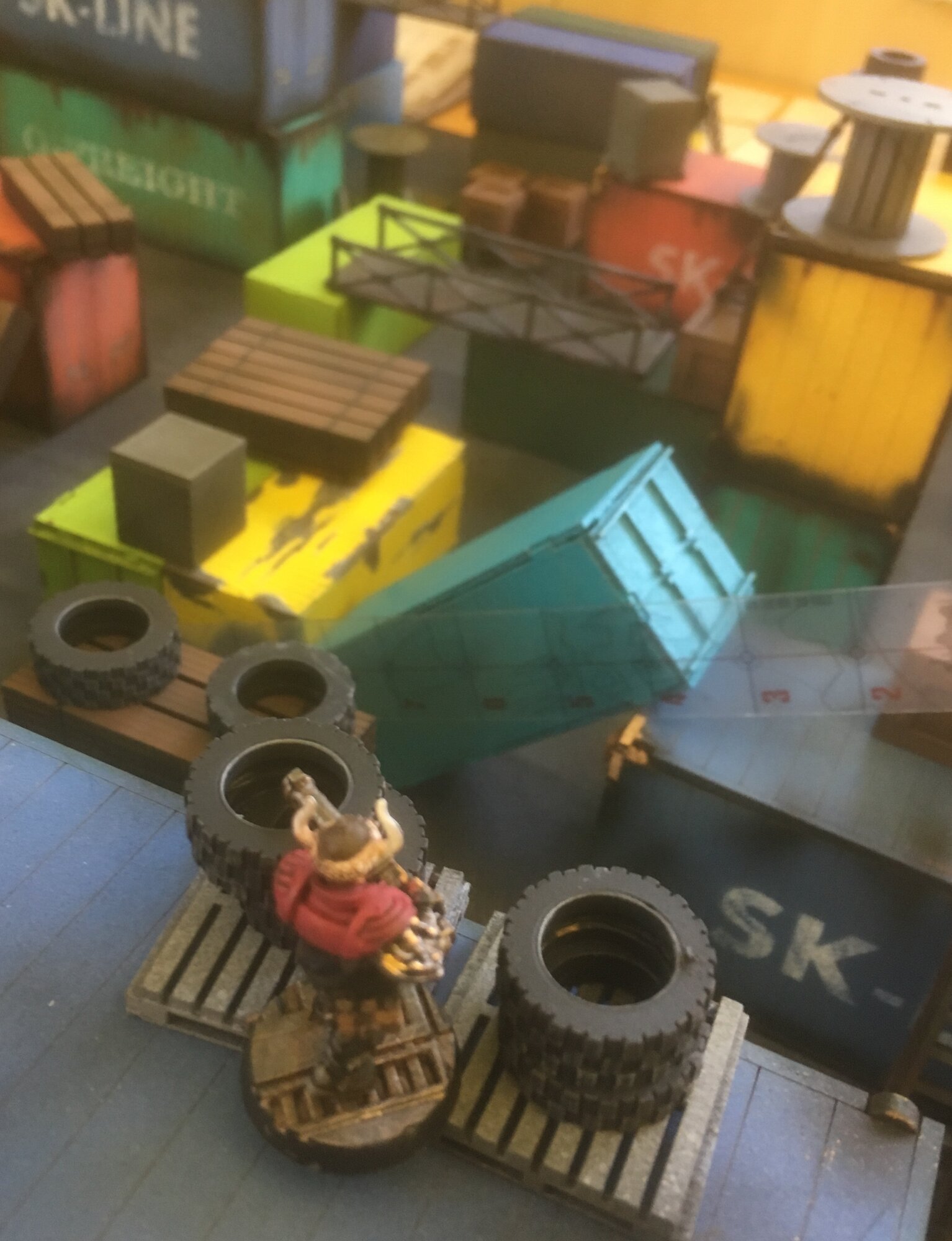 Two crewman catch a glimpse in the shadows, their suspicions confirmed when one gets his fingers bitten off! 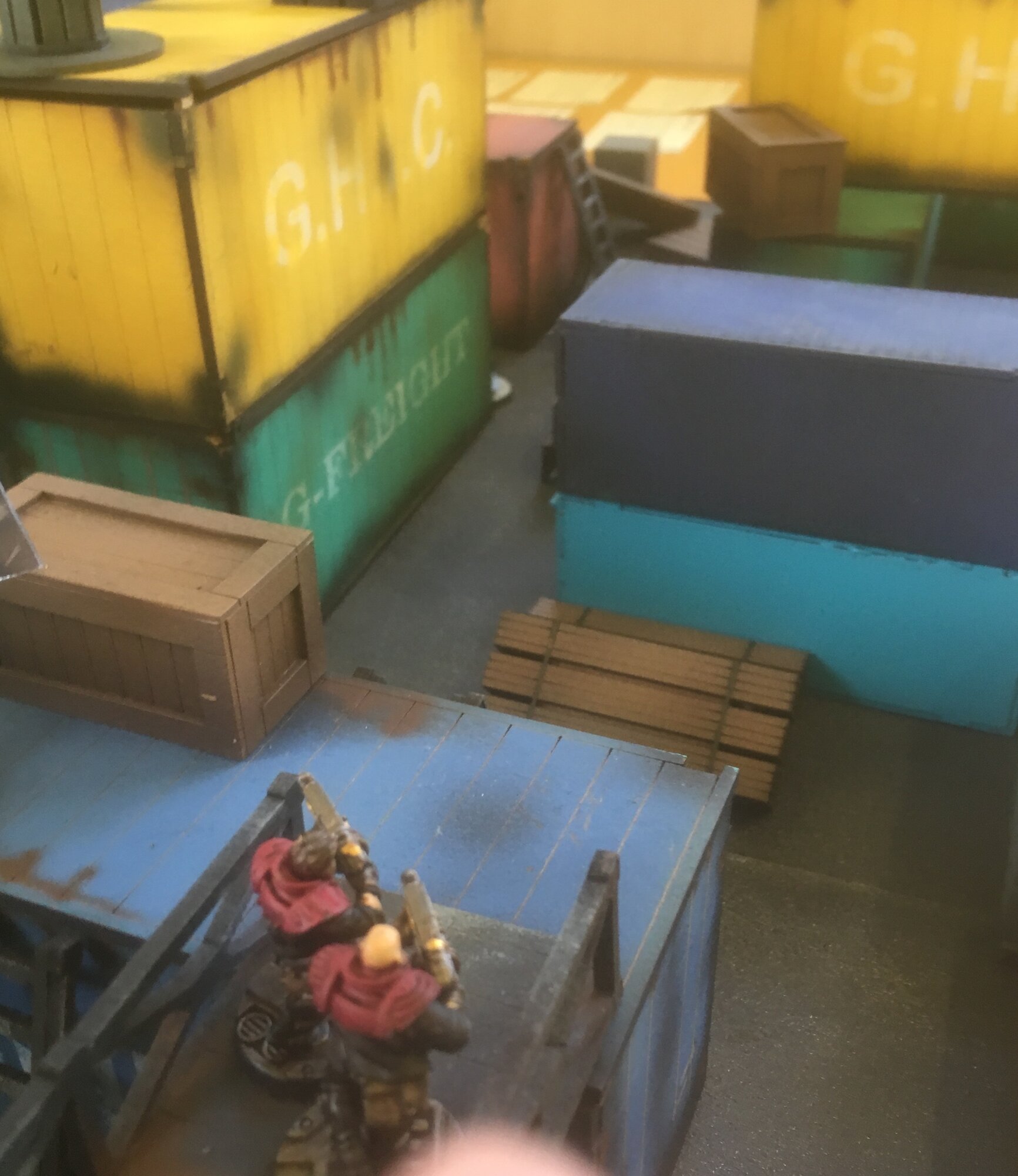 An aberrant surges from the smoke and rends a cruel wound upon Sergeant Shave! Leitenant comander Shortsight makes a tactical retreat with one of the crew and they are soon joined by a terrified Cadet Moustache! 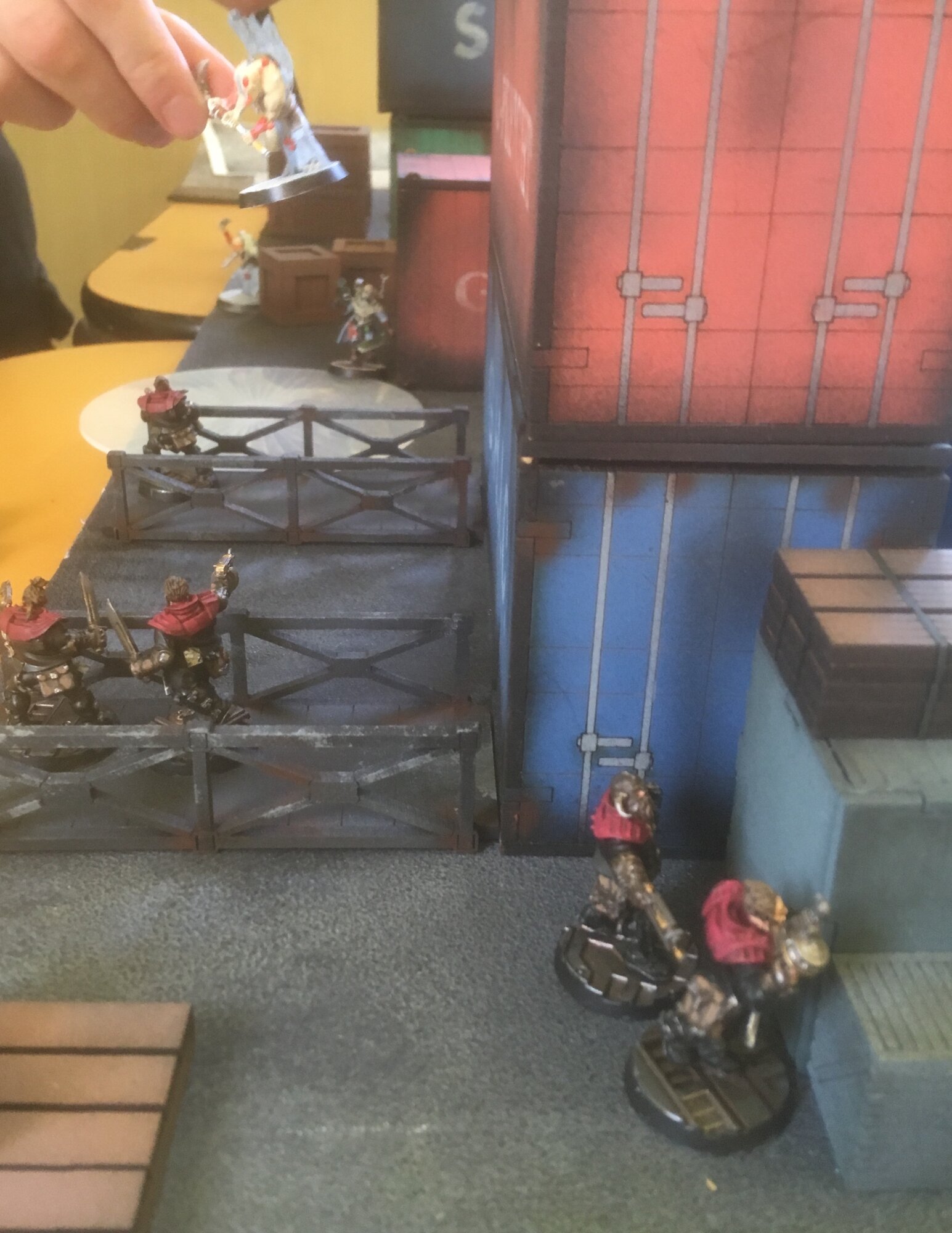 Crom eventually finds a target, and team alpha make a determined counter attack when the cult Magos gets his warp in a twist. But it is too little too late and Shortsight calls for an immediate evacuation.
Reactions: Drew25a, MordianBlue, ThreeDice and 3 others

Wary of teleporting into the unknown, Team Alpha decide to enter the dome by more conventional means. After a short navigation through some old ruins they come across a Toll Crossing. 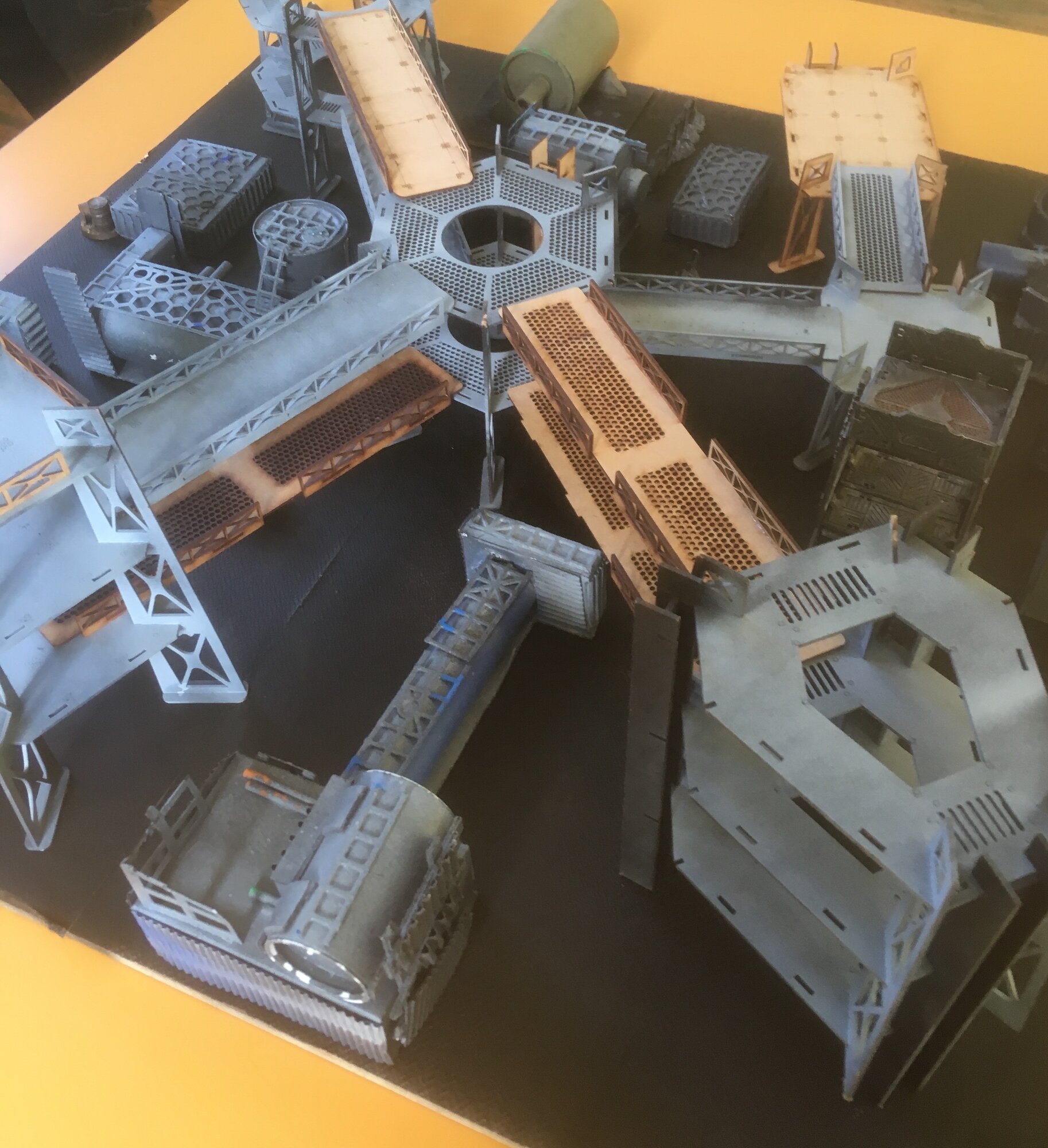 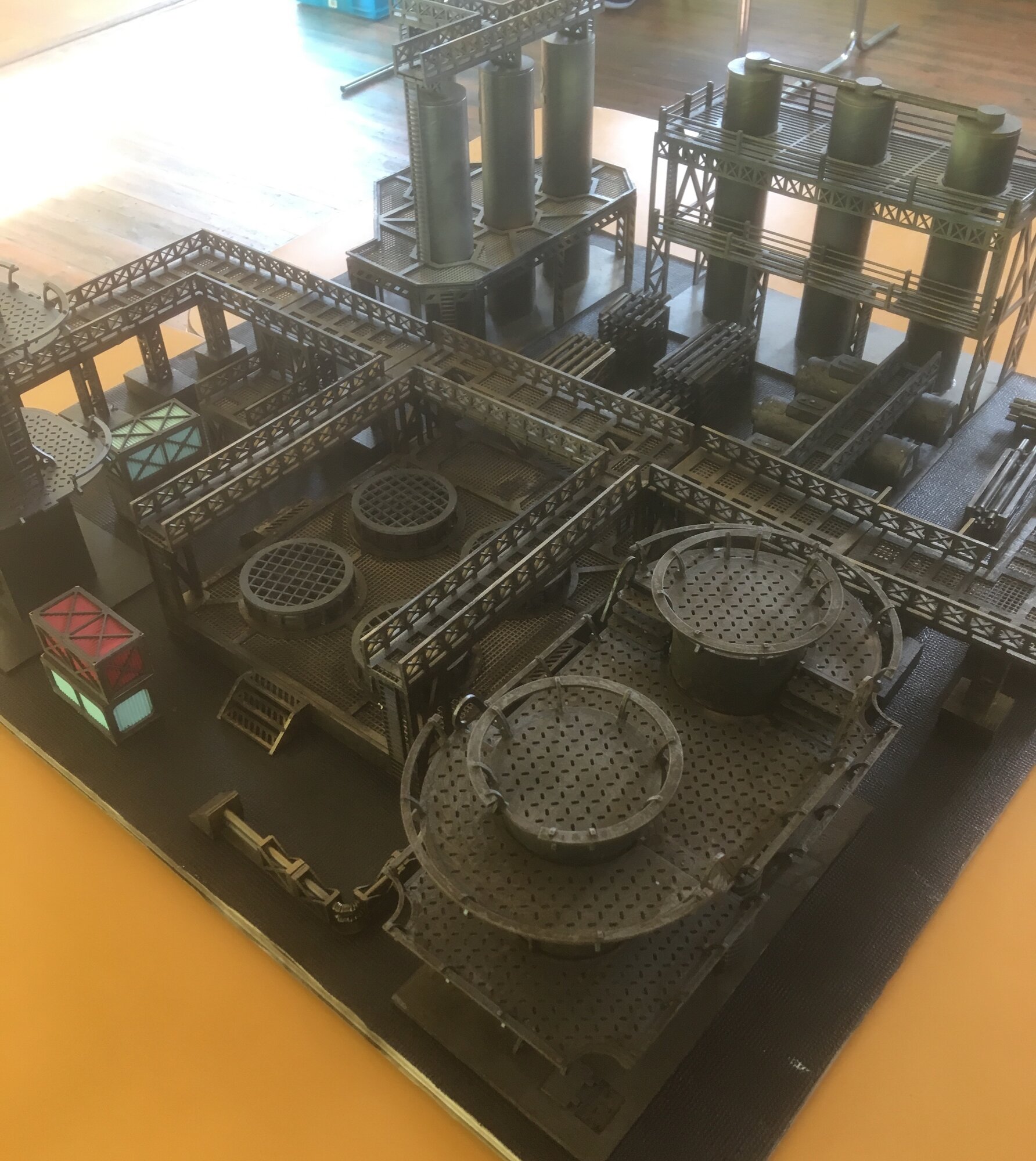 Crom takes possition on his perch as the crew push forward to meet any resistance. 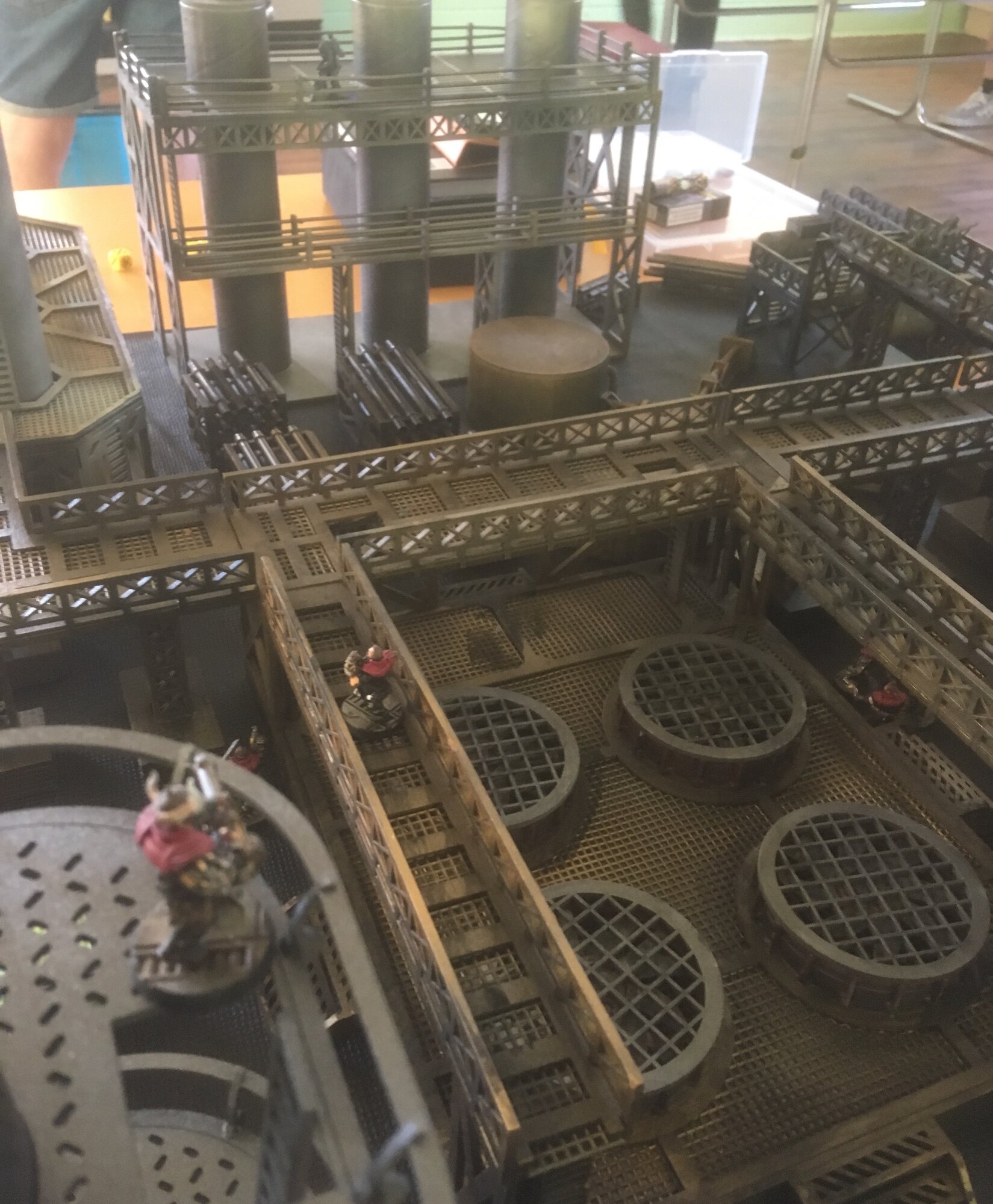 A well aimed blast of light erupts from the gloom, the unmistakable sound of a mining laser gives the concealed enemies position away and identifies them as being The Cult of The Ordeal! 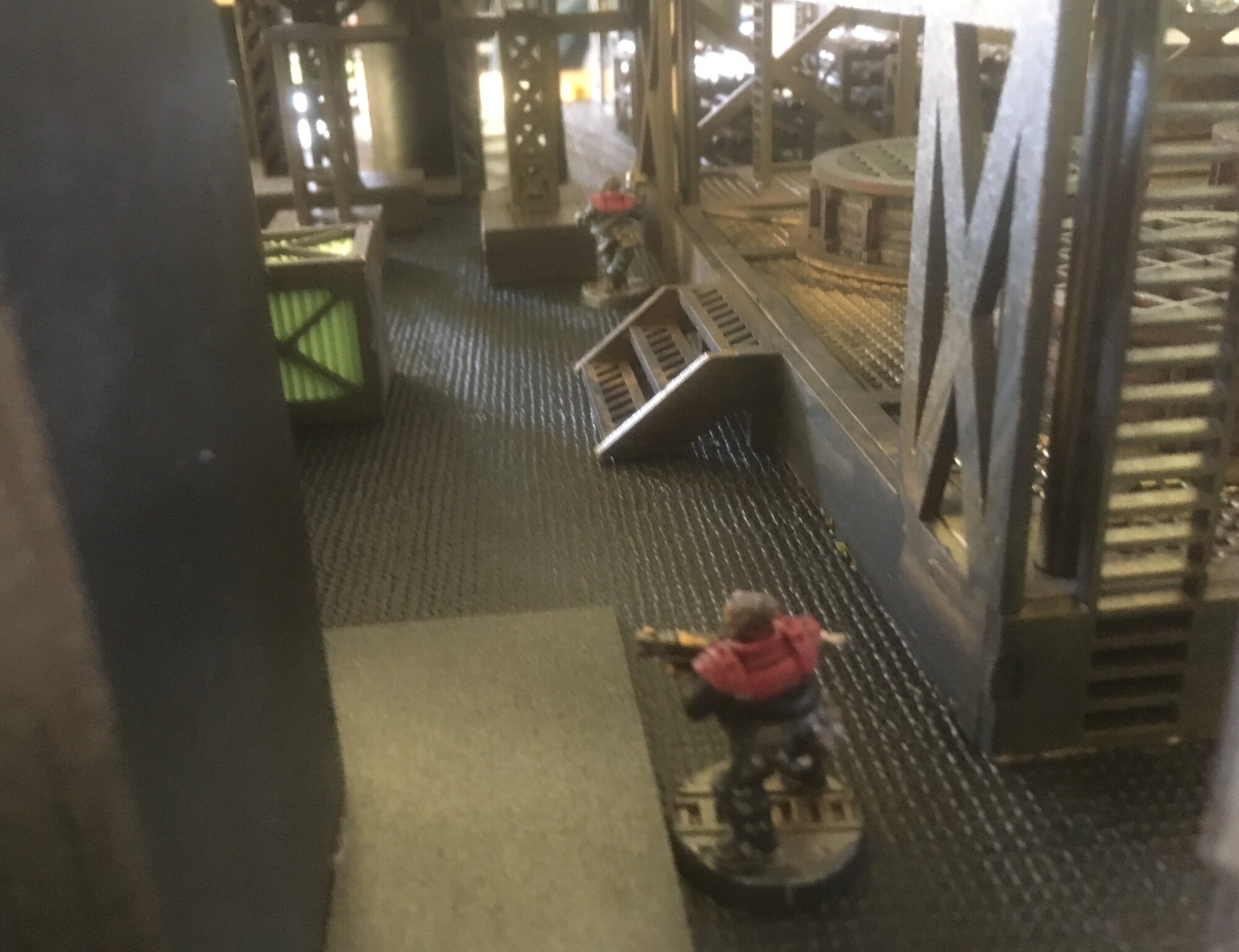 Crom swiftly takes out the mining laser but jams his weapon in the process. Crewman AA ignores his las melted armour and gets back into action laying down covering fire. The rest of the gang push forward unafraid, led from the front by Shortsight!

Too engrossed in a close range firefight, The Lieutenant Commander failed to spot the hybrids up above on the gantry, they throw a demolition charge which Cadet Moustache eargerly tries to catch but ends up exploding in his face! 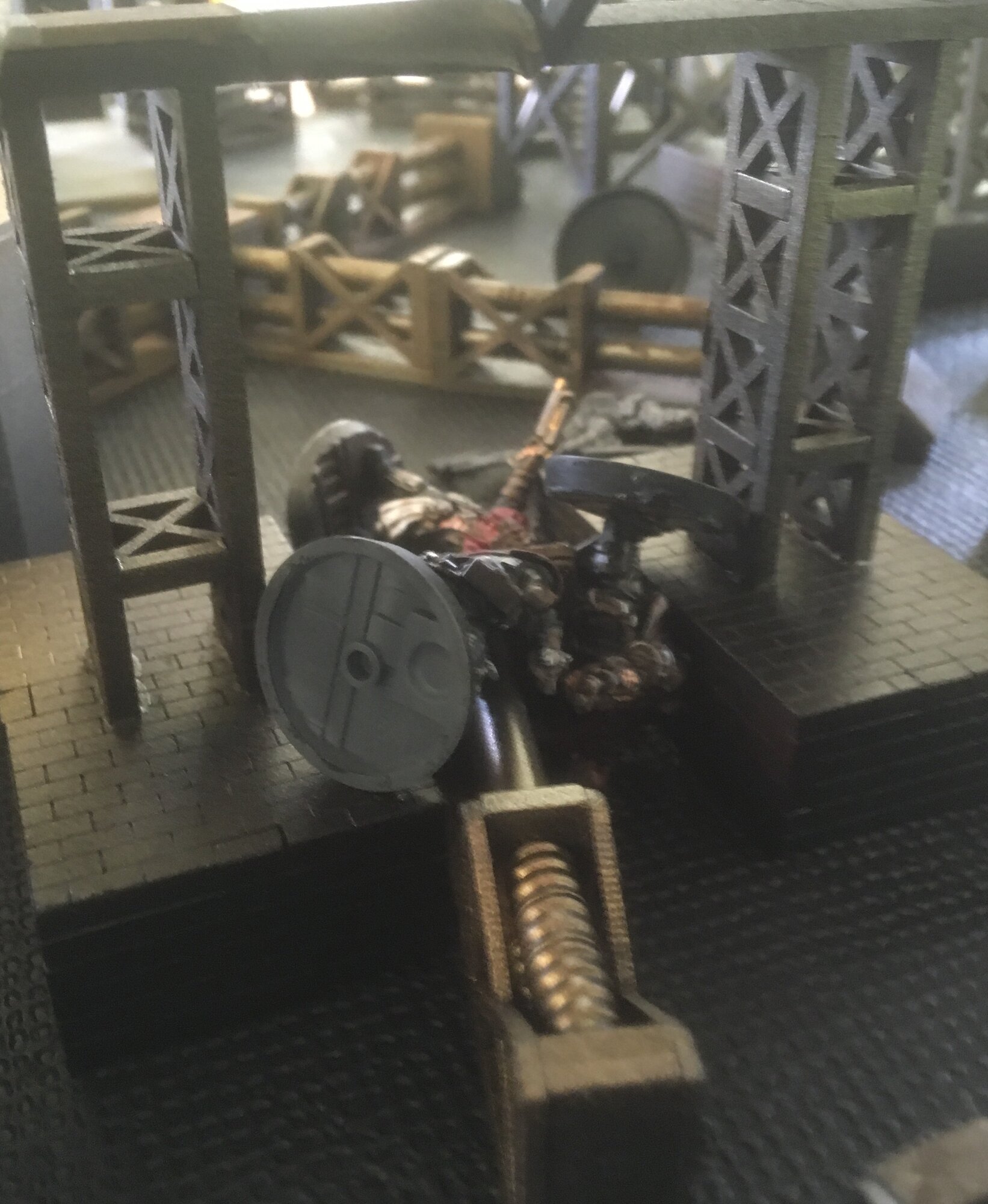 Unaware of the Cadets critical condition, Shortsight (his armour almost impenetrable) wades into the nearby Xenos, taking down their magos! But with Croms gun silenced and his support suddenly gone, the retreat is sounded “Beam us up Snotty!”

Safely onboard (The ship ISS Crumpet), Moustache is rushed into surgery and after a difficult operation, his Moustache makes it through safely, but one of his eyes doesnt!
Crewman AA also visits the Docbot, but after a direct hit from a mining laser, a burst of autogun fire, and a two story drop, he just gets some sudacrem to put on the burns and a lolly pop for not crying!
Reactions: Drew25a, MordianBlue, MedMos and 4 others

This may have taken more than half a year to write up, but here’s the report of the last fight of The Redshirts!

Pitted against yak man @Patch Escher (the violent femmes), the gang were given the task of shutting down the lively lasses gambling den in order to buy up the guild rights to the property when its value dropped!
So the plan was: to sneak around the back of the club when it was in full swing and destroy the promethium power generator before an alarm could be raised!

Team Alpha split into 3 and got into position... 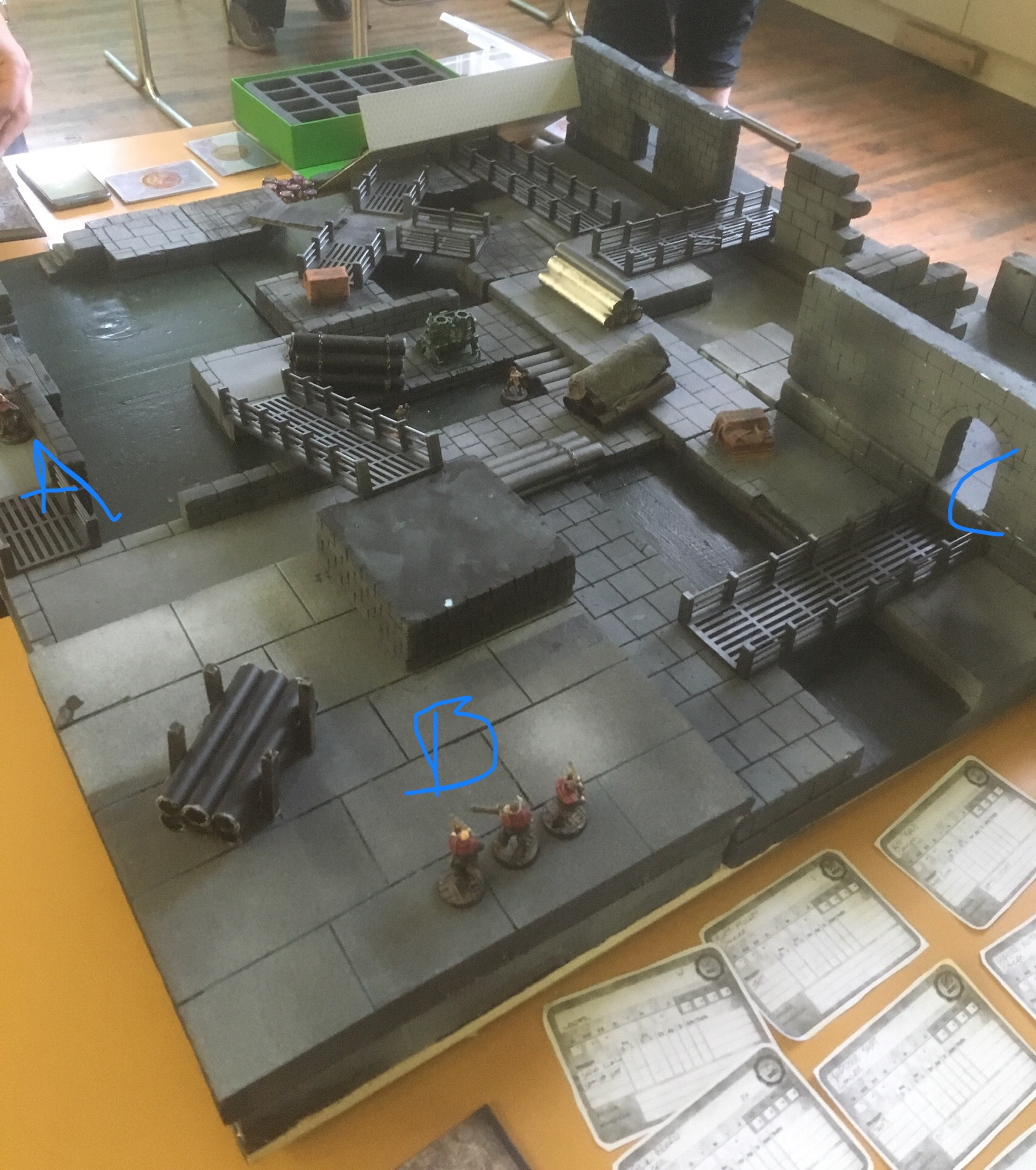 Squad A reach the objective undetected, two hapless Escher youths think they hear movement but the heavy baselines coming from the club masks the redshirts movements! 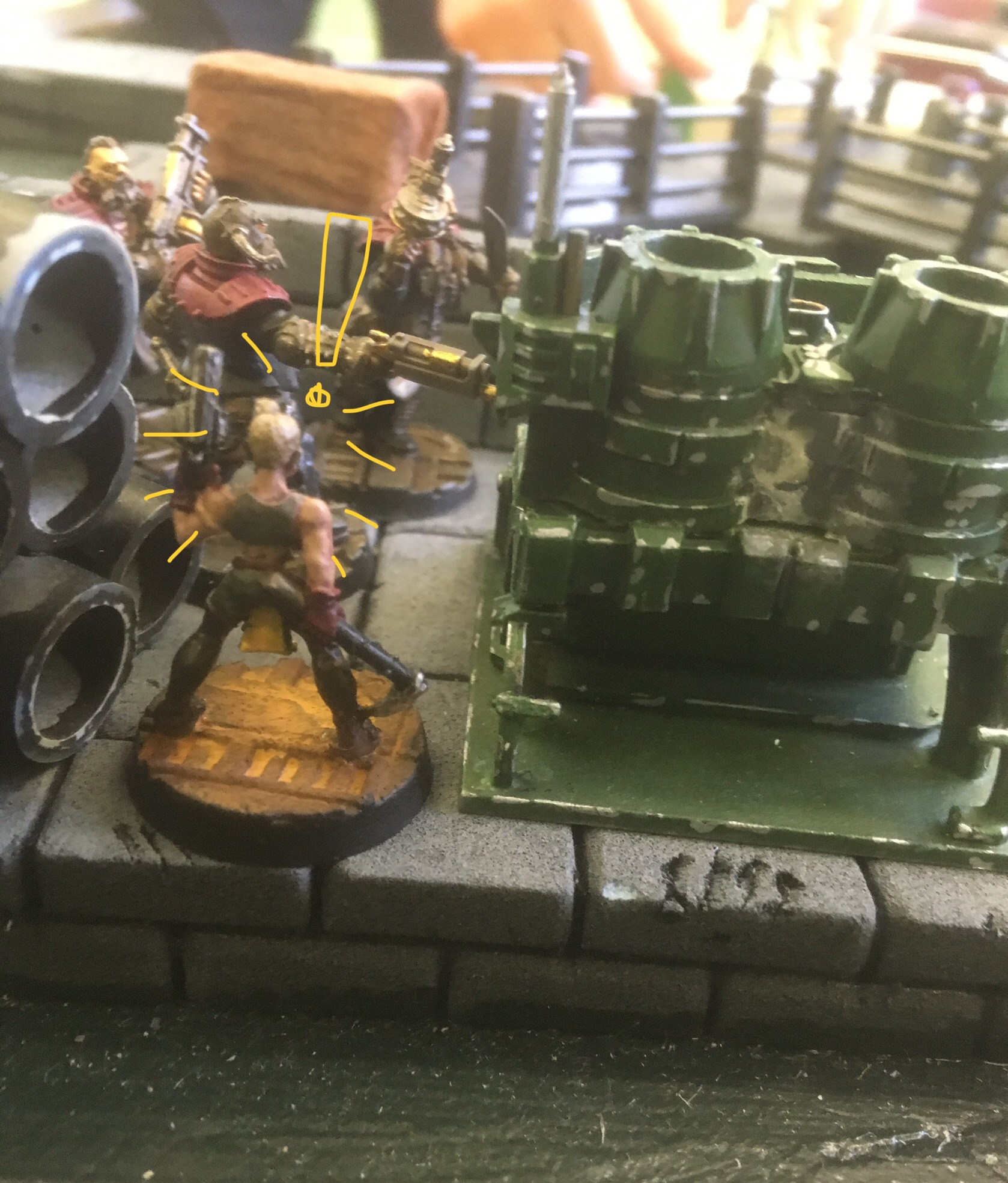 The Redshirts leader stands on an empty crisp packet which somehow pops!
The Alarm is Sounded and the tunes from the club end with the scratch of a record!

The juves spring into action...

Escher reinforcements arrive and pin the overwatching squad B...

After a tense close quarter engagement, the orlock leader finally makes a wounding shot with his sawn off, as one of the crew makes a flying head but straight into the generator console!...

The leader, looking worse for wares, lands the final (servo clawed) blow to the ancient machinery!
It there is an underwhelming explosion and it disappears in a puff of smoke!...

The retreat is sounded and the redshirts claim their first victory!
...despite completing their mission, all contact has been lost with Alpha Team! It is rumoured they have gone awol in Escher turf and help run the former establishment they had a hand in taking down!
Reactions: Punktaku, MordianBlue, Ardavion and 1 other person
D

we are about to start a new campaign at Durham raiders
Reactions: CaptainDangerous

I’m definately up for it!
Is it a continuation from the last one or will it be a complete fresh start?
how did the last one pan out? (I can only see the territories and battles on the campaign page for it)
Team Alpha‘s Gambling Den has a strict 2 arm/no chitin door policy!
Show hidden low quality content
You must log in or register to reply here.
Share:
Link
Top Bottom