I've been posting photos from my games so far onto the Discord, but of course that's only a small part of things.
Shouldn't be too difficult to copy what you post here over to there if you'd like me to?
Reactions: spafe

That'd be great if you could mate!
Reactions: BearsWillEatYou

spafe said:
Cheers bud. I really should put some of this up on the discord too... might volunteer one of the others to do that as I find posting on phones a pain
Click to expand...

The webclient of Discord is really good! You are on the BFG discord?
Reactions: spafe

BearsWillEatYou said:
I've been posting photos from my games so far onto the Discord, but of course that's only a small part of things.
Shouldn't be too difficult to copy what you post here over to there if you'd like me to?
Click to expand...

Hello!
I suppose mine's a fairly recognisable username. Good to see you here.
B

spafe said:
That'd be great if you could mate!
Click to expand...

Cool- I'll try to get that done ahead of this months session so there's less to catch up with later.
Reactions: spafe

horizon said:
You are on the BFG discord?
Click to expand...

I am indeed, very handy for the lore chat and for any rules queries! just find longer posts and pics are awkward as sin. Part of being a luddite.

I do agree that, as old school, I have a preference for forums but the picture sharing in Discord is just really great. Plus it's smartphone friendly. And as said the webclient of discord works really good.
Reactions: BearsWillEatYou and spafe

And to add, for my online gallery I use Instagram.
Reactions: spafe

And here are the records unsealed of the 1st month of the Hazeroth Incursion. Chaos have claimed two regions, the Orks and Imperials one each. The Tyranids were unable to secure any further harvesting grounds, while the Tau seemed to be inactive at this point in the campaign. 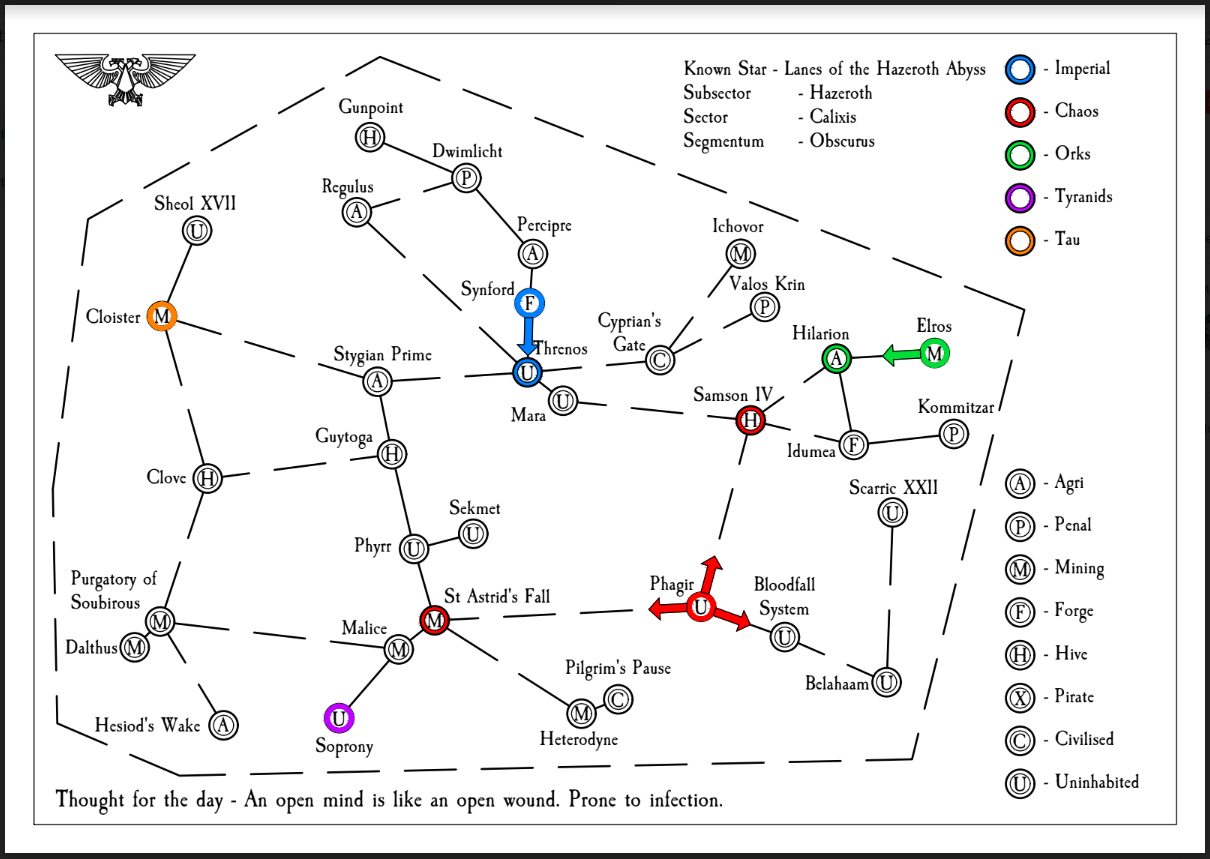 At this time its worth noting that Imperial quartermasters deemed the value of the sector in terms of resource output against resource to hold as being circa six standard months, at which point the progress of the allotted battlegroups would be assessed. If they held more than any other faction, they would have warranted further investment and the full might of the imperium would be brought to bear, securing the sector. If, however they had not managed to secure enough planets and one of the other factions had more then the sector would be deemed not to be worth the investment of further imperial strength and the sector would be abandoned to the heretics and Xenos until such time as conditions were more favorable.
Reactions: Stoof and BearsWillEatYou

-Excerpt of the heretical 'Treaties with the Xenos'-

One example of Imperial commanders looking to shore up their positions can be found in the records of the Hazeroth abyss incursion. The Admiral of the fleet based at Synford requested a fleet of Astartes [Ref. Blood Angels fleet dispositions 23-22.26Alpha-Epislon] to push towards the incursion and take them away from his base of operations. The Emperors Angels were judicious in their persecution of the Emperors foes, securing Threnos and pushing on to secure Cyprian's Gate. While this is sound strategy, using the Blood Angels as the shock troops they are, it also allows the Imperial Admiral free reign to secure his grip over Synford and manoeuvre politically to secure himself. With little-to-no military progress, he dispatched envoys to invite the Tau to expand out secure the imperials western sector, thus shoring up a buffer of Xenos who would not destroy the worlds they claimed. This foresight and diplomacy is questionable at best, and it is only the authority of one such as a High Admiral who could even consider such overtures. The successes of this strategy are not relevant to the lessons within, only the consideration of when it is worthwhile to open diplomatic channels with the Xenos, and how to be in a position to maximise the benefit. Thus we can see that the aim was to remove the staunch Imperial forces who would never countenance such a move, while using them to their full potential, and create the room to negotiate without hinderance. 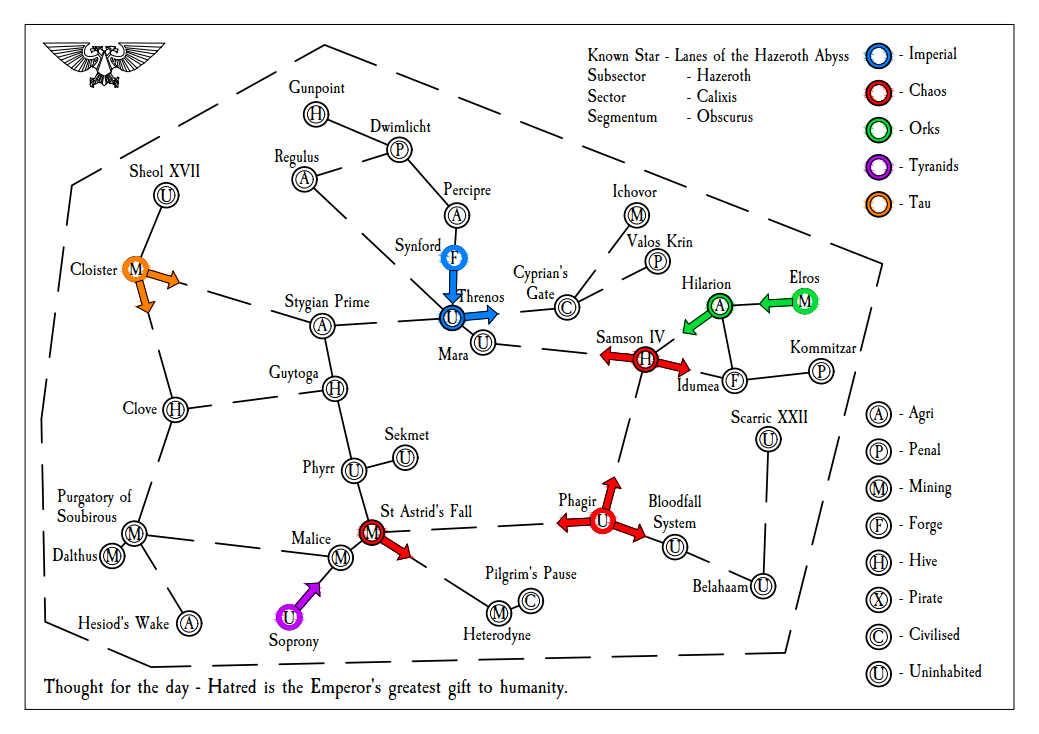 So this is round 2 of 6. The attacks are shown above. Tau have sprung into action, pushing for Clove and Stygian Prime, Our imperial player is MIA, but the Marines are still waging their crusade for the imperials into Cyperian's gate. Chaos are pushing on all fronts, trying to take Mara, Idumea and Heterodyne (the attack to the bloodfell system is a cartographers error). Meanwhile the orks are trying not to get boxed in, by taking Samson IV from the chaos. If this attack goes well, it could mean the Chaos empire becomes scattered and potential targets open up for a lot of mayhem. The nids are still trying to progress to Malice to get out of their cul-de-sac.

The games are being played this Thursday, and then it is a bit up in the air if we have round 3 in Dec or Jan, so might be a little bit of time before the next round, so we'll be aiming to make this one a good one!
Reactions: Stoof, andrewedwardbrown, radulykan and 1 other person
Show hidden low quality content
You must log in or register to reply here.

N18 Enforcers as a "neutral" element and how to balance them

N18 Setting up an eternal campaign