Necromunda The hive in a box project

So I've been playing roleplaying and boardgames from sometime in the late 80's. For a long time I was scepitcal towards miniature gaming.It was a little prejudice against actually playing with toy soldiers, but foremost that I suspected what is now known as "the hobby" would consume some time – and money. Anway a couple of my gaming buddies talked me into trying Munda some ten years ago. "There's not so many models to paint and stuff and stuff, and supposed to be great fun". Well I tried it, and I did love it. Immideatly. However "the hobby" was still daunting.

Last fall, anyway, I finished renovating my flat and had some spare stuff around, so I figured I'd make some simple terrain. Well, all my suspiscions hit hard. The hobby eats you in. And I shall never go back.

Here's my new big project, a magnetic "Hive in the box". Inspirations are the terrain from the original Munda box, both how cool it looked and simple it was to assemble, but also how light it was with terrible result if one somehow shook the playing table. And now i've been seeing magnficent magnetized terrain online, so I've given it a go.

Concept:
-Sixteen 30x30cm tiles with precisely placed magnets combined with magnetic metal spread around in a random pattern.
- Board shall be self contained with simple magnetic pieces, but also look great and be a battlemat to put bigger unmagnetized terrain on.

Don't know how many hours I've put in. It would certainly have made more sense to just buy a battlemat. Here it is, regardless, the first set up of my "Hive in a box", unpainted and with my three hive megastructures.
Last edited: Jul 12, 2018
Reactions: Aulenback
B

No, obviously it's not. Had to just post anyway, time spent writing and such. How now do one get images up in thread in a forum like Yak? I've done it before, and it's easy (but complicated) when one knows how to . Seems I'm back to square one again. I shall however adapt and overcome.
Reactions: Punktaku and Space Truckin
B

So, I have to make an album. Where is "create album" buttom? Why was I not born in the middle ages? I could have worn a cool chainmail and carried a huge sword. Chances are of course that I would be a starving, dirt digging peasant. But I would never have to deal with all these computer related issues. Or Trump.
Reactions: Punktaku
D

Up on the top bar there is a tab called "Gallery" click that and select add media.
B

Yes, I was there but didn't see the "create albums" in the folder option. Blind again. Thanks anyway, now I did actually see it!
B

So there is some development, but most of my files were too huge. One I cropped was not. The task of finding out how to scale pictures in Images I shall never endeaveour to find out. Tomorrow I'm renewing my Adobe license. Anyway, for now

Well, that went real well.
B

My last two attempts. After tonight I shall never again use a computer. Rigt now, however, I will listen to music and enjoy my last two beers.

are you using the little camera button to pull in pics from your gallery, or putting in the URL? i’ve read on other threads that using the gallery URL causes issues, so use the camera button instead.
Reactions: Benoksen

I just use photobucket. I copy the link & paste it into the image dialogue.
Reactions: Benoksen
B 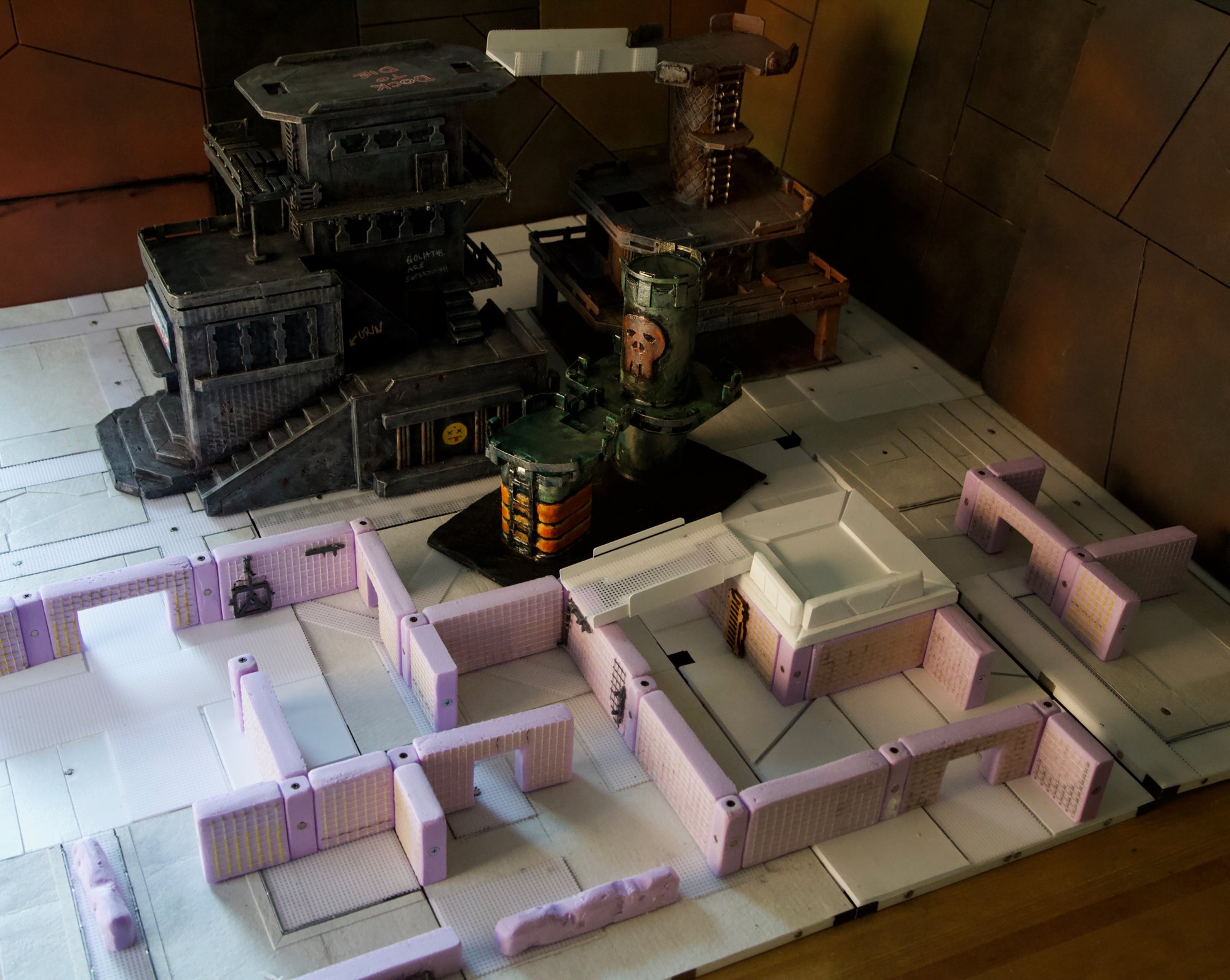 Walls are made of 20mm pink (more solid than blue) insulation foamboard.
Thanks, guys! I don't use Photbucket or any other online image bank presently, but the camera buttom seems to have something going for it. Lets try:
Reactions: Toffer, Blood Donor, ThreeDice and 5 others

one good feature about the Gallery is it sizes your photos down to a max size (i think 2000x2000 or something). cropping does help. just using iphone pics i had over 4mb of pics. i downloaded Photoshop Express (free!) and set it to resize photos. i replaced a few and added hundreds of pics and i’m just over 3 mb now. yes, added hundreds.

Cheers buddy! However I must get Photoshop and Lightroom back on. Used to have the whole Adobe license, but it got a bit expensive. The photopackage, isn't really expensive at all. Just have been lazy. That's no good. All Adobe programs are superior, and dealing with a program such as Images after having learnt Photoshop and Lightroom to an least decent level is like sitting with hammer and letting it fall to your knee, again and again

is that the pink insulation foam?

No you’ve got one photo up - post moar!
Reactions: spafe

As a Juve to upload images you need to have made 10 posts, so browse the site and comment on a few threads to introduce yourself - this is to ensure you’re a real person not a dastardly Russian bot (bizarrely we get bots trying to post about health drugs the most).

Once full access has been granted use these buttons.

To add images to a gallery; 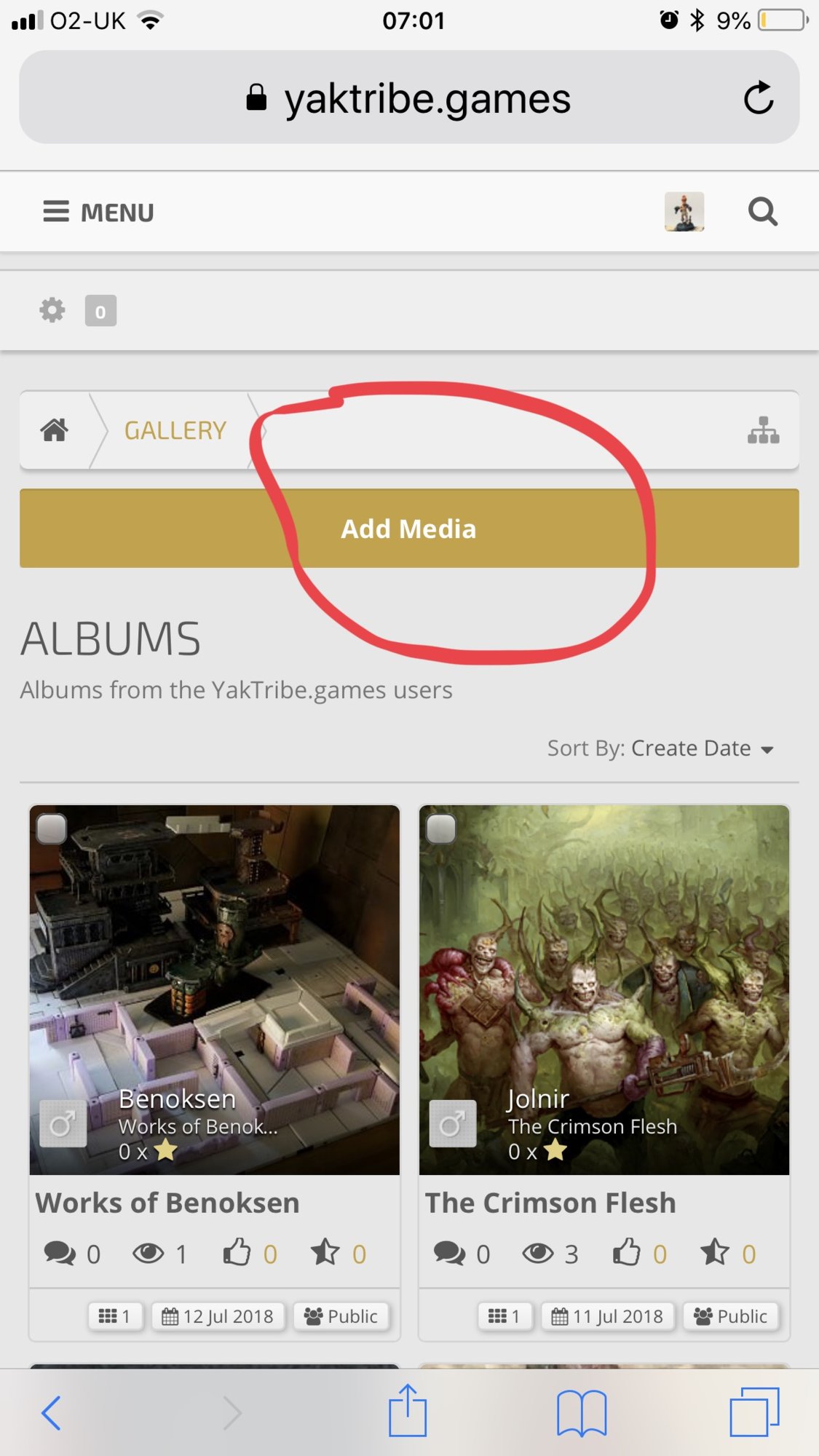 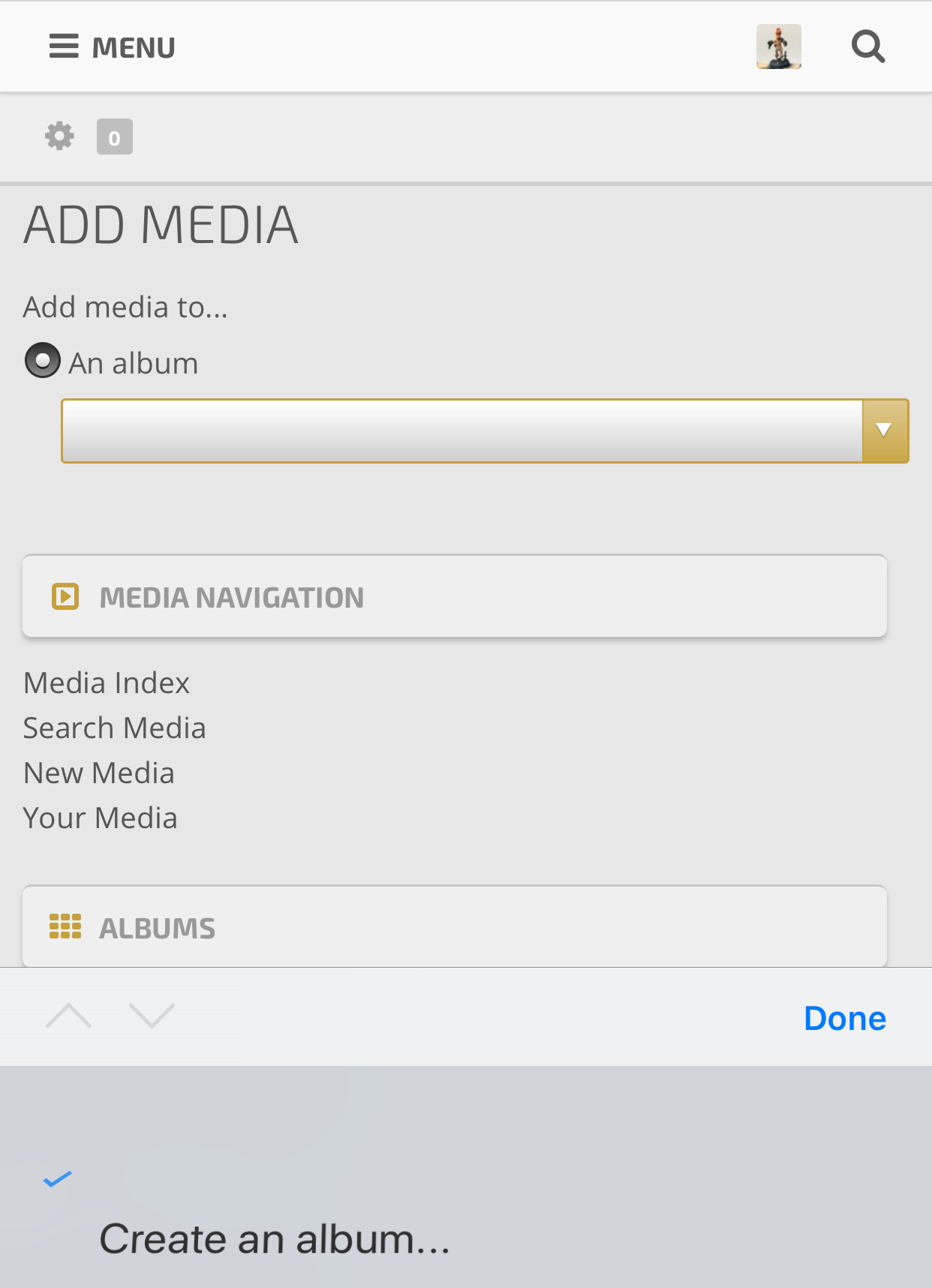 Once added to the gallery add to a post by clicking the top camera button; 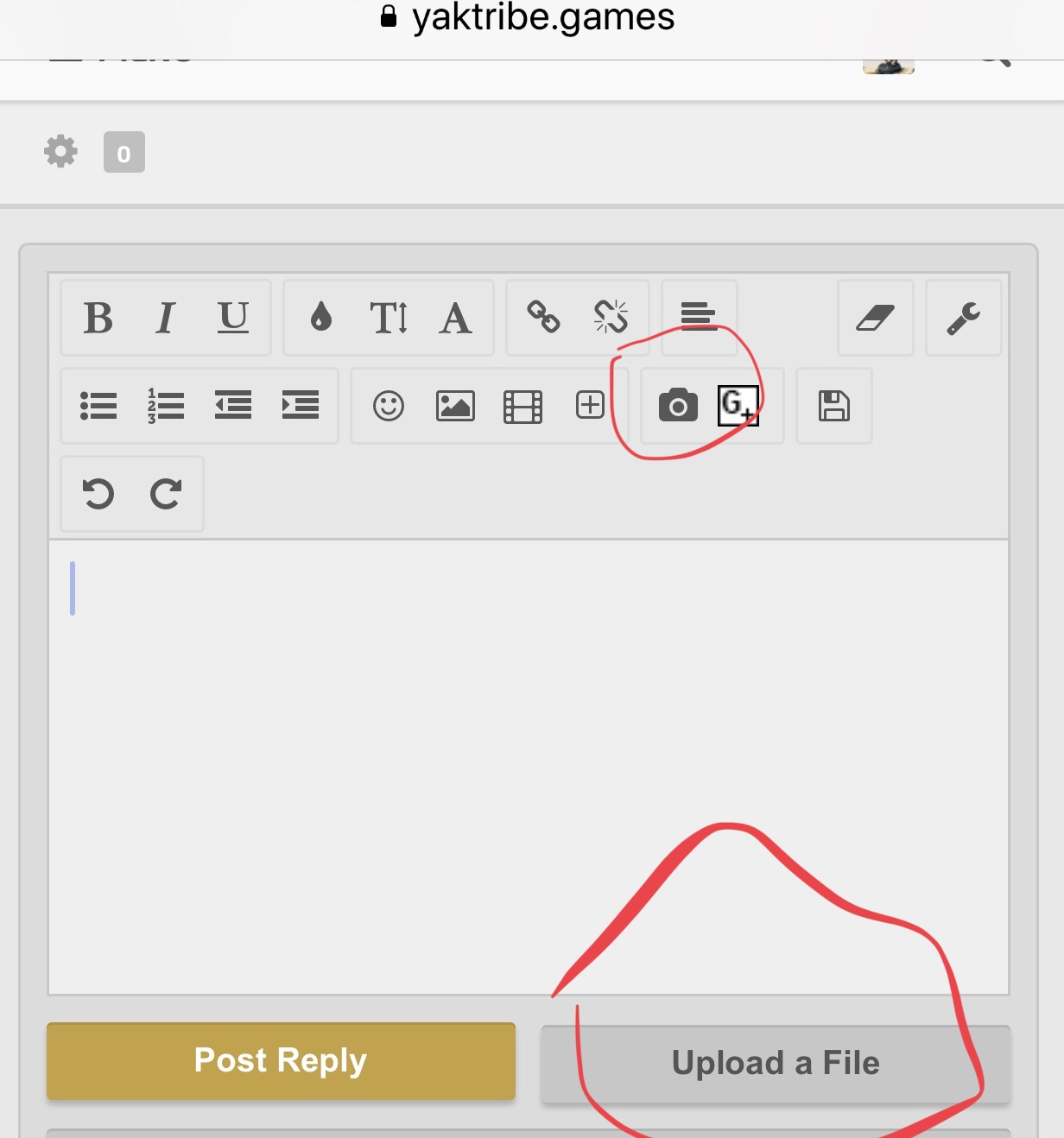 Or add a file directly via the bottom button.
Reactions: ThreeDice, Benoksen, Ben_S and 1 other person
B

Red_Starrise said:
I just use photobucket. I copy the link & paste it into the image dialogue.
Click to expand...

I thought Photobucket stopped people actually using their site for image hosting (unless you pay a subscription).
Reactions: Blood Donor and spafe

I should have also said - there’s no need to edit you file size etc the site does it automatically to reduce the strain on the servitor bots or something. He who shall be obeyed apparently knows how this all works, I just think it runs on fairy dust....
Reactions: Aulenback, Blood Donor and spafe
B

Thanks again! So then I will start working on my juve status and let everyone know how things should be regarding everything. Hehe. First I'll adress the N17 juve mess, then go into more depth of the complete lack of logick and coherence in the gang rate and campaign system. Will be going to Poland for a week, though. They propably have internet there, but I will leave the laptop at home.
Last edited: Jul 12, 2018
B

Punktaku said:
is that the pink insulation foam?
Click to expand...

When I get the rest of the photos I have up, I will come with a complete list of materials and specifications. For now, yes it's pink insulation foam. What I can get locally is pink or blue foamboards, and the pink is more solid. This especially is an advantage for screwing screws into, which is a key part of the build.
Reactions: Punktaku
Show hidden low quality content
You must log in or register to reply here.
Share:
Link
Top Bottom