Started playing Mordheim again this past Saturday and today I realised a few of my heroes. The Priest has been painted by someone else, I just washed it (tho somehow that went wrong overnight). The others are re-assembled Mordheim plastics with heads from I think the Pistolier kit. The Captain, I must say, turned out quite nicely. A good ol' DV Cultist and some quick snipping and viola!

Now I just need to rescue this Captain from my friend's Possessed warband... his Possessed took him out in the first game and of course he ended up captured. So we'll be playing the Scenario from TC6 where they have 12 rounds to sacrifice him and I have 11 to save him. (I have to now, I've made a model for him!) 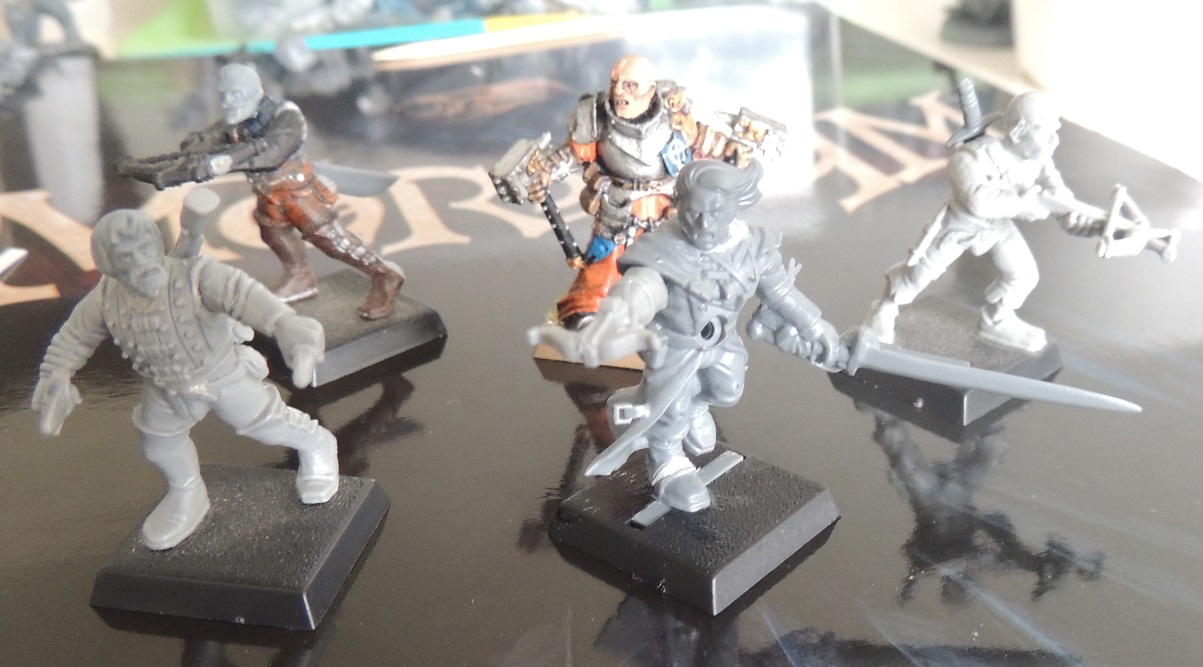 Ooh, I like that DV cultist being used like that...consider the idea stolen
Reactions: trollmeat and Tulkas

Here are a few more, because your comments and likes give me a sense of worth and the self appointed right to bully people online.
First the bossman, Darren Hearne (quick and stupid name meaning translator said Darren* meant Witch and Hearne is Hunter.) 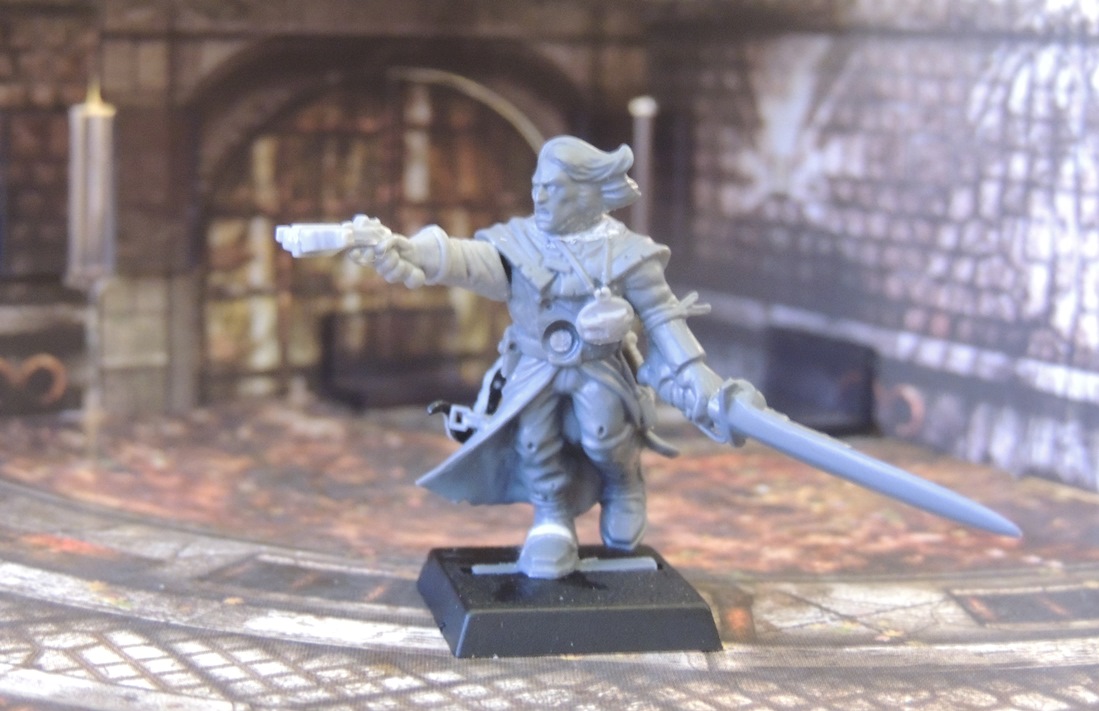 Two crossbowpistols, because I hope to give him a brace of those soon (if he survives this weekend's rescue mission). And everyone needs a good hangin' rope! 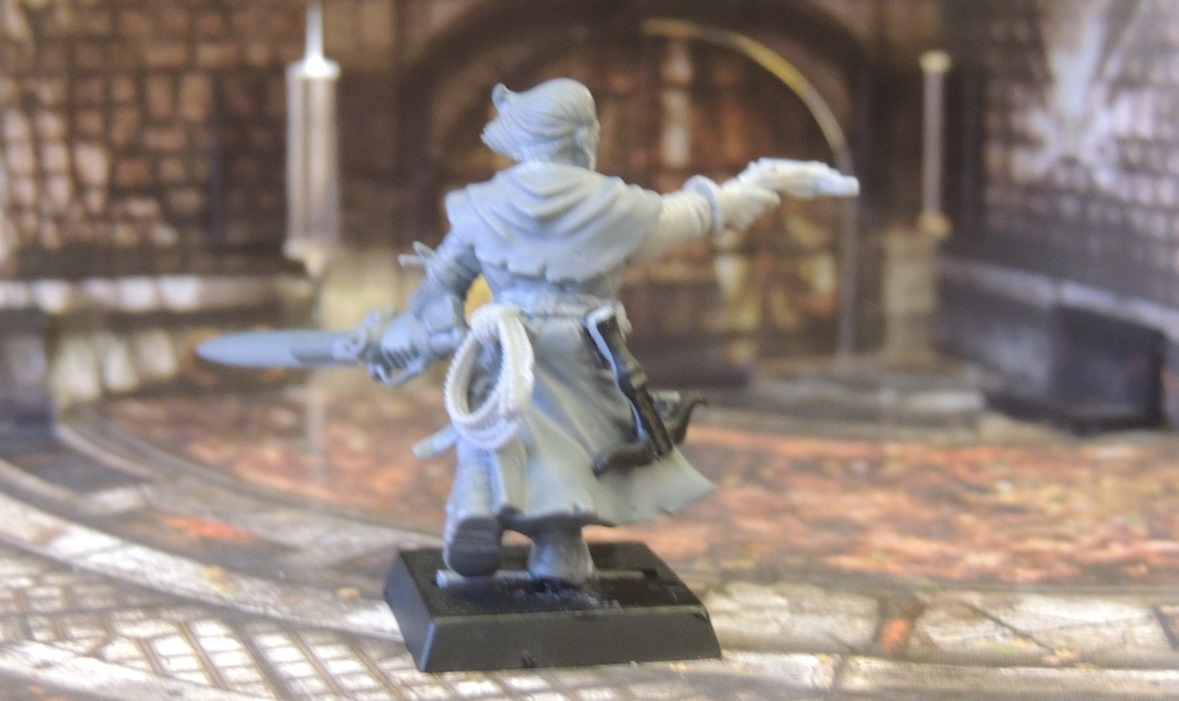 His wily amigos, of which only the guy on the right (for the viewers at home) has a name at this moment; Holter (also means Hunter apparently). Both him and Darren have a wolf token, as they are both members of the Brotherhood of the Wolf. I had to make that up to replace the Chaos icon the original Cultist would have had at the end of his neck-lace. 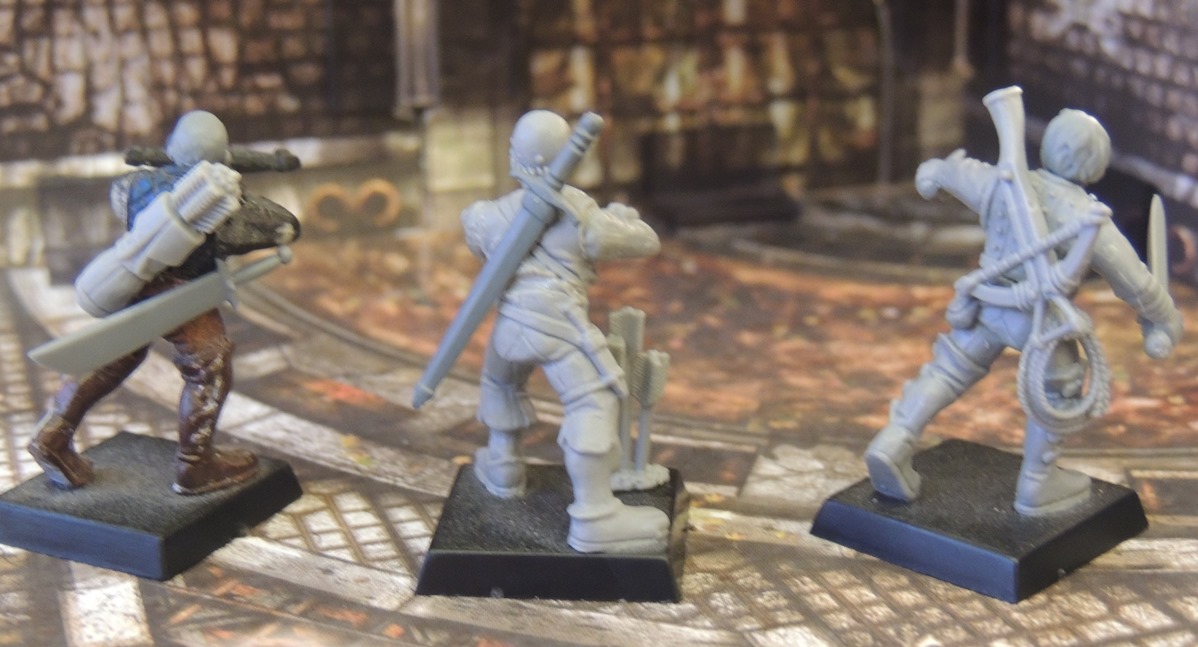 One more close up of Darren looking menacingly (in a dashing way). Also, that's my knee, in case you watched too much South Park recently. All that's left now is the effort and will to fill up the gun-pin hole in his gut. First I'll see if he survives this weekend. 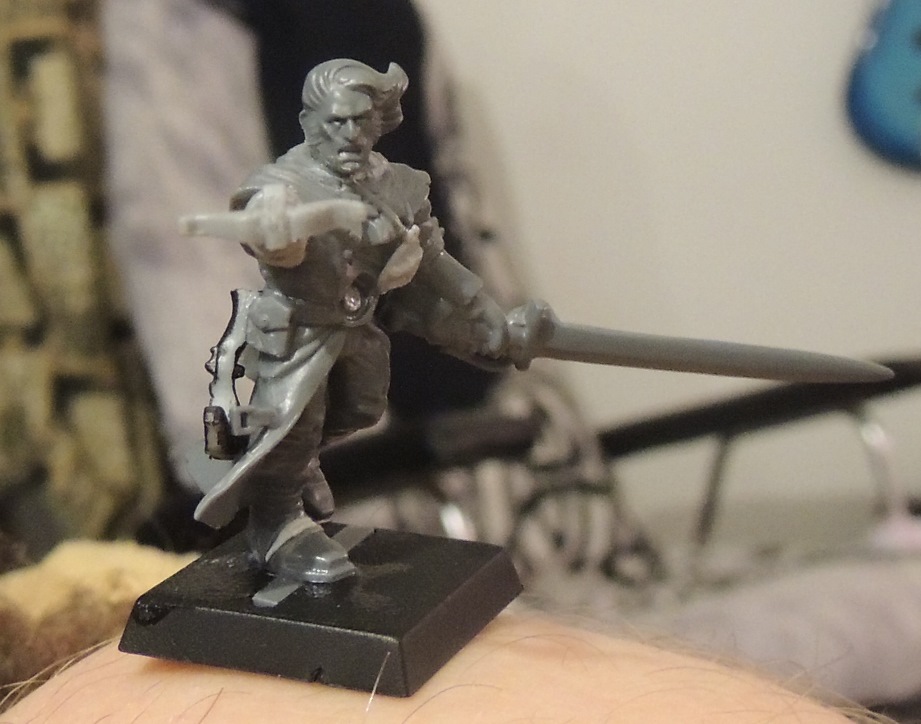 *apparently this name was in the list, because it was the guy's name on that very long ago tv show "Bewitched". Still, it fits my character.
Reactions: Brendan, trollmeat, Rusty101 and 3 others

They are looking awesome mate! let us know how the rescue mission goes, I hope you've made a suitable sacrifice model to use up until the dashing capitan is rescued (ddont those silly possessed know the good guys always win!)
Reactions: Tulkas

Right. The warrior Priest is clear. His name is Father Ham. (short for Abraham, meaning "Father of a multitude). Found this when I was looking for a name meaning fat.
Now I show you a few more, each with or without names. Mostly I want to show you my work finished short of some greenstuff and paintwork.


Holter. He comes from Marienburg, as can be seen by his puffy sleeves and thighboots. (Leather is pricy, he can afford it, ergo he's a rich boy). Name means "Hunter". From the same order as Darren Hearne (as can be seen by the matchin pendant both carry). 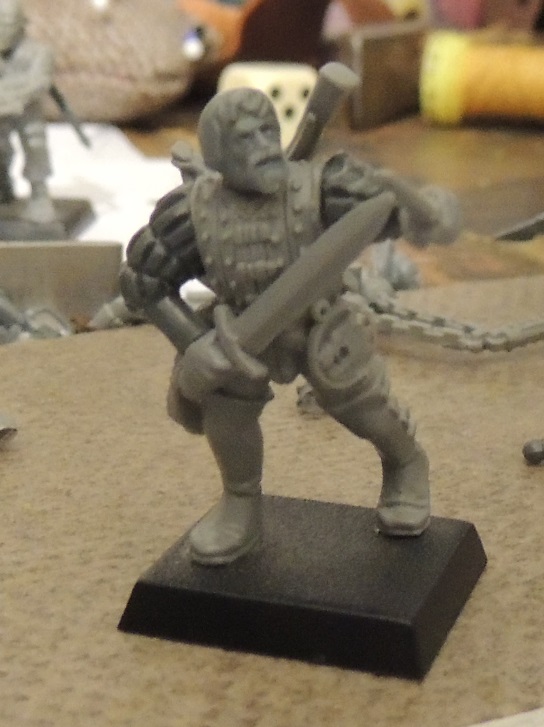 Unnamed zealot. I haven't made up my mind yet if I'll replace the head or not. If I don't, I'll take out the bionic eye. (The thingy on his back is now a vial). Mold lines will be dealt with accordingly (as is the fate of all mold lines and heretics). 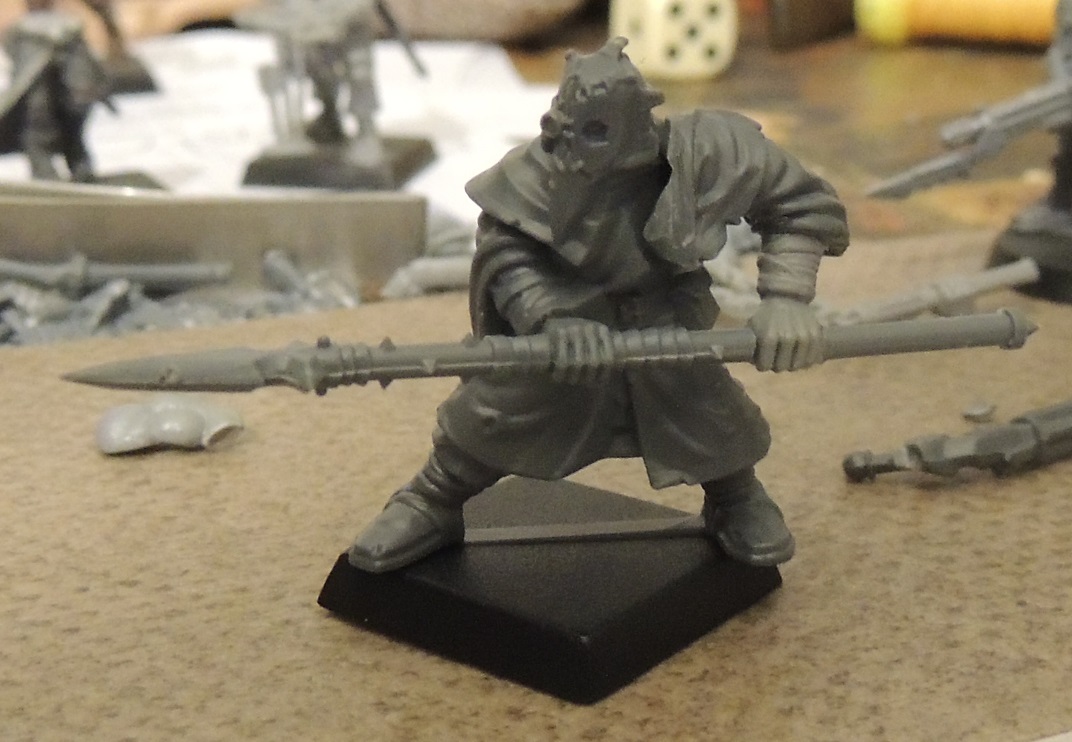 Chap with the axe: I hope for a Flagellant rolling Lads got Talent soon, then this guy will become that hero. Obviously he will be de-Chaosified. He will just be called the Executioner. Latin for Execution is Carnifex (no big surprise there), so I'll just stick to Executioner.
The guy on his flank doesn't have a name yet, I haven't thought of a backstory yet tho I think I'll let him hail from the Border Princes area. Needs to switch bases, other than that, quite a happy chappy (me, that is. He's a mean bastard). 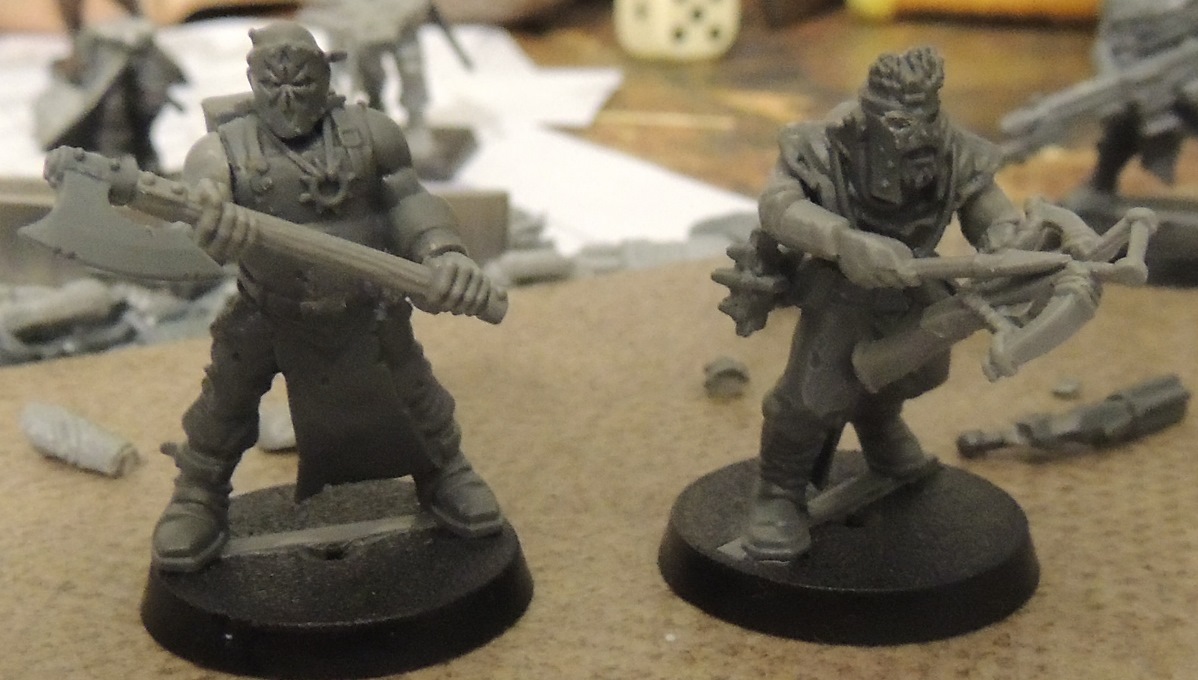 Hope to play the Kidnapped scenario (TC 6) this weekend, Hearne's life is at stake after all. It would be so sweet to capture one of his guys in return, then the same scenario will be played, except his guy will be the one getting hot feet! I would appreciate a little input about "alternative" rewards for Witch Hunters who'd manage to win a scenario like this. A Possessed warband who manages to sacrifice their victim gain +D6 xp to distribute freely and 2 Rewards of the Shadowlord. Xp's xp, but how would the rewards be represented to Witch Hunters managing to burn a heretic at the stake?
Reactions: Brendan, trollmeat, Rusty101 and 1 other person
R

Not seen the DV cultists used in a fantasy setting yet, they look really good especially the dashing capitan hairn ( I would change his name to this purely down to the models wavy locks)
For the bonus for burning a heretic, maybe the +d6 experience and just give all your warband +1 leadership in the next d6 games as their belief in their righteous cause is strengthened? Nothing too powerful but nice for a bit of fluff?
Reactions: trollmeat and Tulkas

Yeah I have to join in too with praise of converting 40K mini's into fantasy mini's. The other way around is doable, but needs to be done right. SciFi to Fantasy is something I had never thought possible, and yet here it is done very well. Hot shit @Tulkas, the kids are gonna have to start calling you the Incredible Tulk. But in order to drive the legend every time you get mad you will have to use Green Stuff...
Reactions: trollmeat and Tulkas

Is there anything those beautiful cultists can't do?
Reactions: trollmeat and Tulkas

Ive found they make a shit pot of coffee, other than that...
Reactions: trollmeat and Nevie

Update: the Hunt failed. 4 died, 1 got captured, the sheet got flushed. I hate Mordheim and now I'm going to sit here and cry in my big girls blouse.
Reactions: trollmeat, Blood Donor and Nevie

Ouch I feel your pain. Did they at least die good deaths and take any of the heretics with them?
Reactions: trollmeat

Sigmar was taking a dump. Lets keep it at that.

On a side note, does anyone have the Cultist Champion in the trenchcoat (see avatar sans zombiehead) spare? I have another cool idea for a Witch Hunter captain, I just don't have the parts.
Reactions: trollmeat

I guess 'the unending hunt' may have been a little overambitious?

Call the next warband 'The Hunt We All Hope Will Go On For A Really Long Time'.

Edit: My commisserations for their tiny plastic widows. Do witch hunters have wives? Probably the rabble do. Not the flagellants.
Reactions: trollmeat

I don't Tulkas but hopefully I'll be getting the set off eBay soon I'll see about sending you that model if I do.

@ntw3001 of course they do . Why else do you think they'd rather be out flagellating themselves? I kid I kid
Reactions: trollmeat and Tulkas

Well, unending is in regards to the weeding out of corruption in society (whether Chaotic corruption or just greedy bastards in government).

@Nevie that's wonderful mate, only do if you can spare it tho, and PM me with anything you might be needing and I'll see what I can do to get it to you.
Reactions: trollmeat

Crying like a girls blouse is what the heretics want you to do! Be strong and gathe a new band of rightous men of sigmar to hunt down this filth and avenge te last warband
Reactions: trollmeat

Lol yeah, that's the plan. I strategically planned the build up of my new warband so that I have an underdog rating of +1, so my henchmen (four Flagellants spread over four groups of one) will get an upgrade after the first game. Has to be a LgT in there somewhere. I'll be using the same models again obviously, tho I might need more flagellants.
Reactions: trollmeat, spafe and Nevie

Lol although I must admit it feels like "quitting", I created a Dwarf Warband today and played a rather succesful match. I had an Underdog rating of +1 so all my Henchmen got XP (all my heroes as well, for that matter) even rolling a Lad's got Talent. I must admit that for once, I rolled pretty good (although my Noble had the hitting power of a wet paper towel). I have two shooting orientated heroes with a skill that I have yet to decide, and a trollslayer as well, who I think I'd like to give Monster Slayer, although I'm not too sure if it's effective enough to take, as I can also just take Strongman and a DH weapon. Still, I think it's fluffy (odd choice of words, concerning a Slayer but still). I have the Grim Ironjaw model from Bloodbowl that I use for my 2x mace Trollslayer, would be pretty cool to have him with Monster Slayer, then no matter what he stands off against, he'll be wounding it on 4's all the time. Oh well, just more to ponder on I reckon. (And muse about randomly).
Reactions: trollmeat and spafe

Can we have pics? I have a upcoming project that will have me make a Treasure Hunter Warband - using the Mantic Dwarves - and I'm looking for some ideas...Scavvies first though
Reactions: trollmeat and spafe

I always use Marauder era models as much as possible for Mordheim, so no fancy converting, tho I reckon the nearly finished paintjob on these lads warrants a picture... Ill see what I can do, was thinking of finishing their paintjob first.
Reactions: trollmeat, spafe and djmothra
Show hidden low quality content
You must log in or register to reply here.
Share:
Link
Top Bottom