The ghostly cloaked figure abandons the vault door. It immediately whips around and begins to hover back towards the bridge. 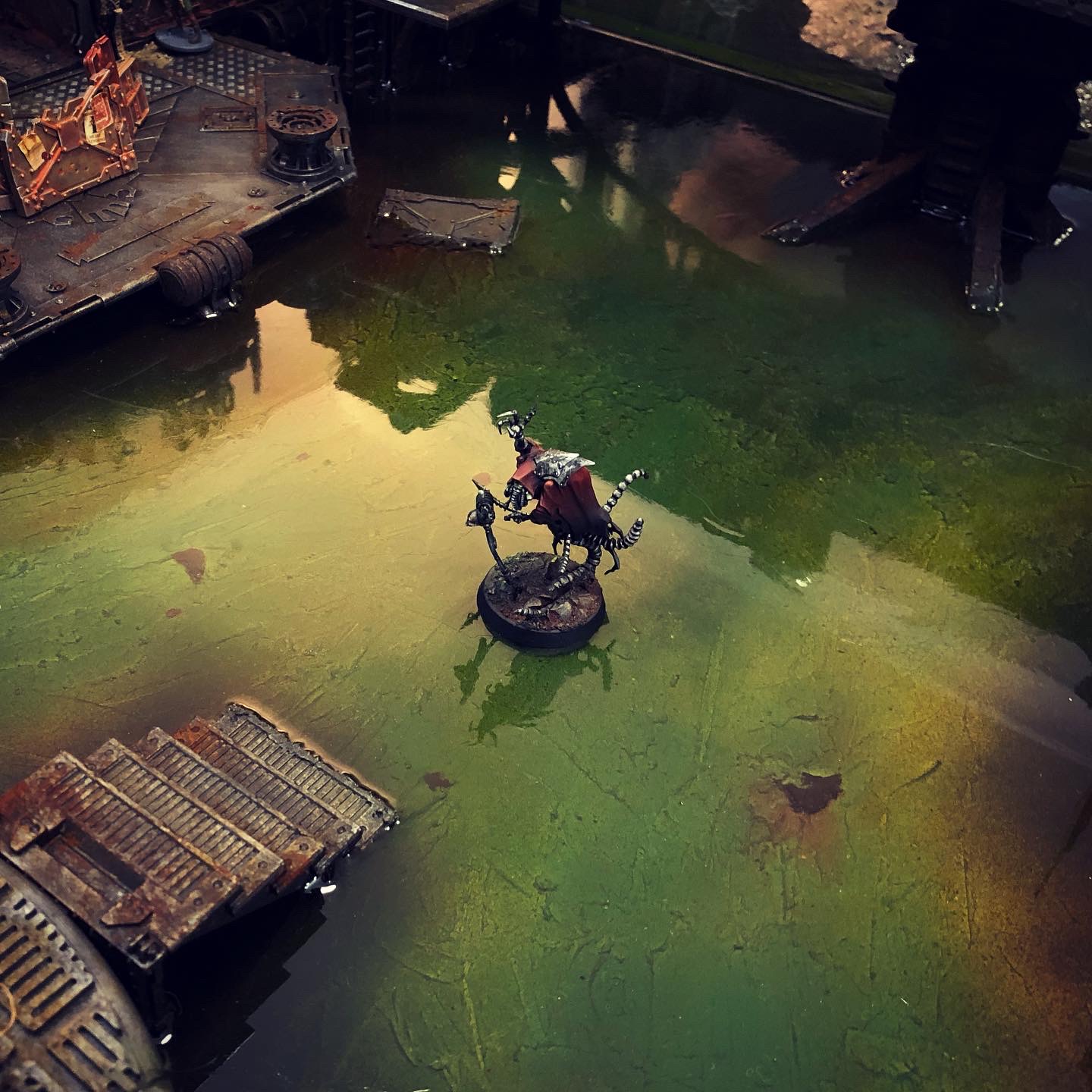 Caulder Looks to Happy. He’s viscously locked horns with Karloth but the longer their fight continues the more and more zombies begin to draw towards them. Karloth begins to tire to the relentless blows from the overstimmed mecha abomination. He weakens and Happys giant chainsaw breaks his staff and buries itself deep within his chest. Happy then turns to face the masses. Soon Caulder can’t see him. Just a sea of bodies spewing into the crater. As they pass, a lifeless Happy lies trampled underfoot. 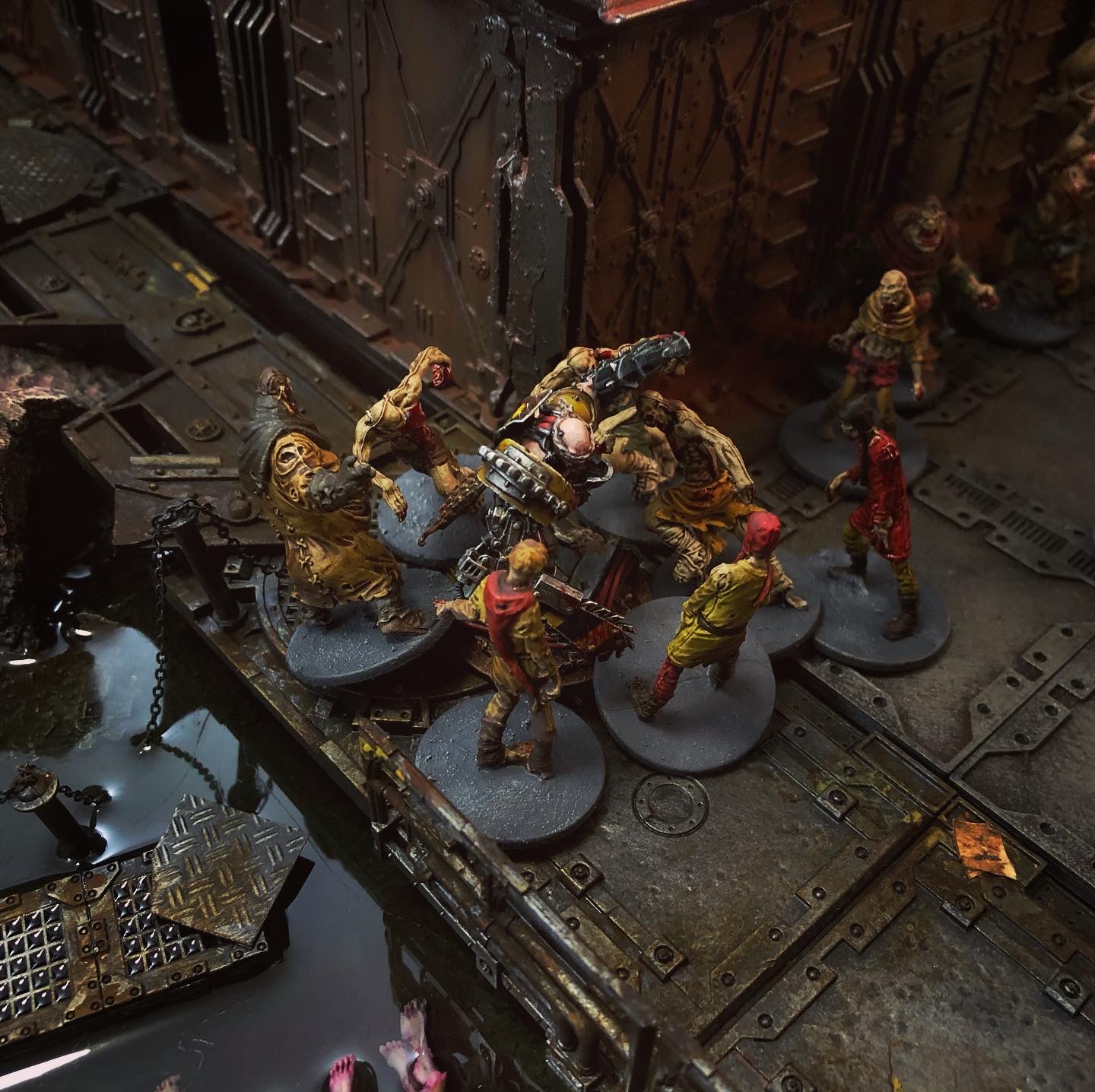 “We’ll catch up to you King! Meet the others at the extraction and clear the exit!”
Joe yells as he and Tubal race to the bridge railing to shoot at the dark tech monstrosity whilst it still hovers over the sump. Its mechadendrites flailing angrily.

Dweeeeeeeeee once again the plasma guns fire in unison. Joe’s shot hits home but the tech priest shrugs it off, thankfully the hand cannon stays stable. Tubals shot just giving the priest enough time to use his deflector shield to shun the attack.

Joe turns to see Tubal. His gun glowing red hot strewn from his arms as he lay knocked on his ass. He crawls a few feet and pulls out his sword but it’s too late. soon the zombies engulf him. 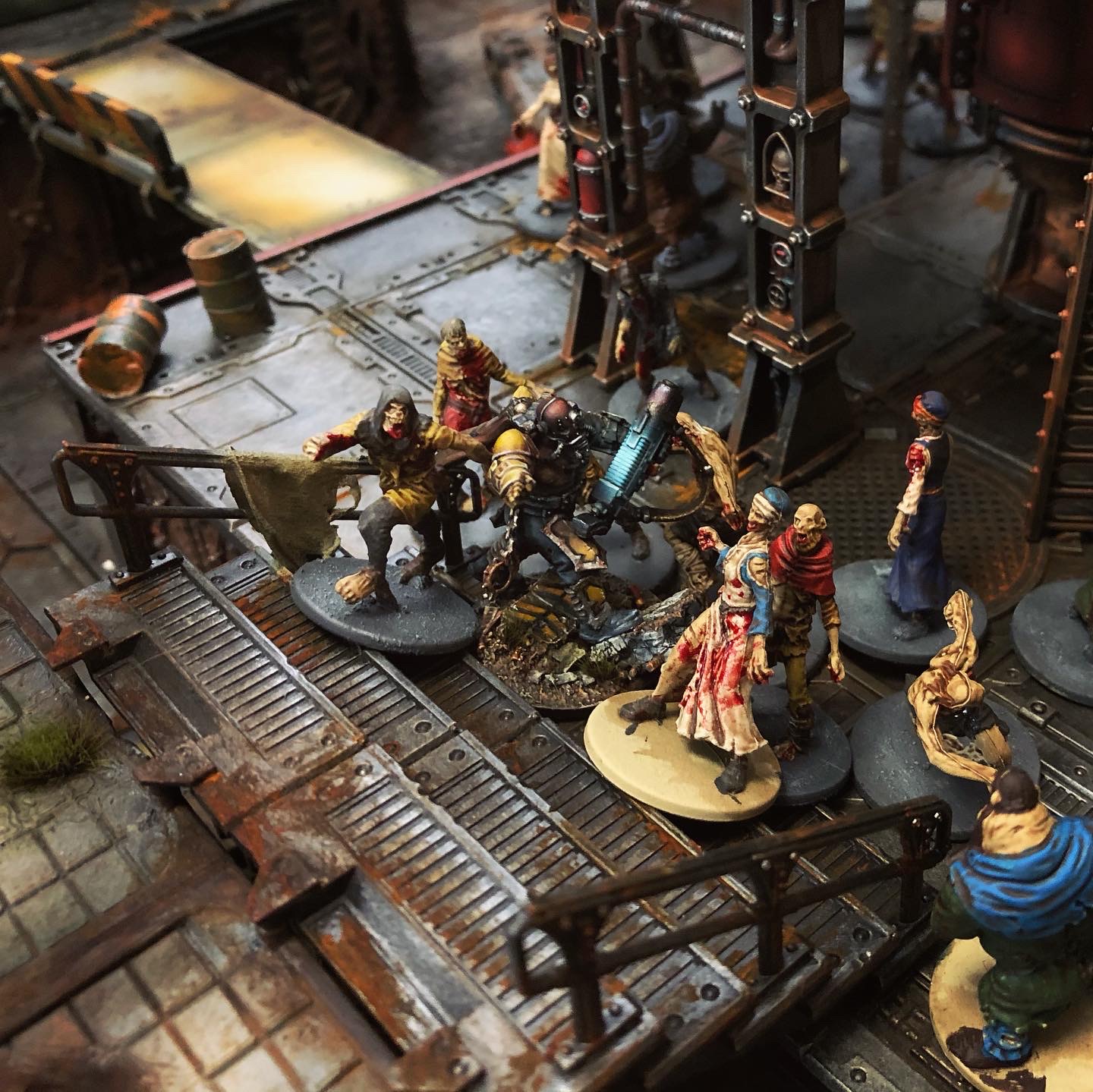 Soundtrack to scene:
Caulder makes it across the bridge. No sign of Blackblood and the reinforcements…

The Scavvies clambering into the mining drill already despite the extraction zone still crawling with zombies.

He looks back at the south bank. Mean and Joe still tiredly hobbling over the ruined bridge. The zombie horde chasing them closely and it looks like they might not make it. Guilt creeps in.

Mean lags. he stops and takes one look back over his shoulder ready to accept his fate.

“What are you doing! C’’’mmmooon Get to the Drriiiiilllll!!!” Joe yells at him. 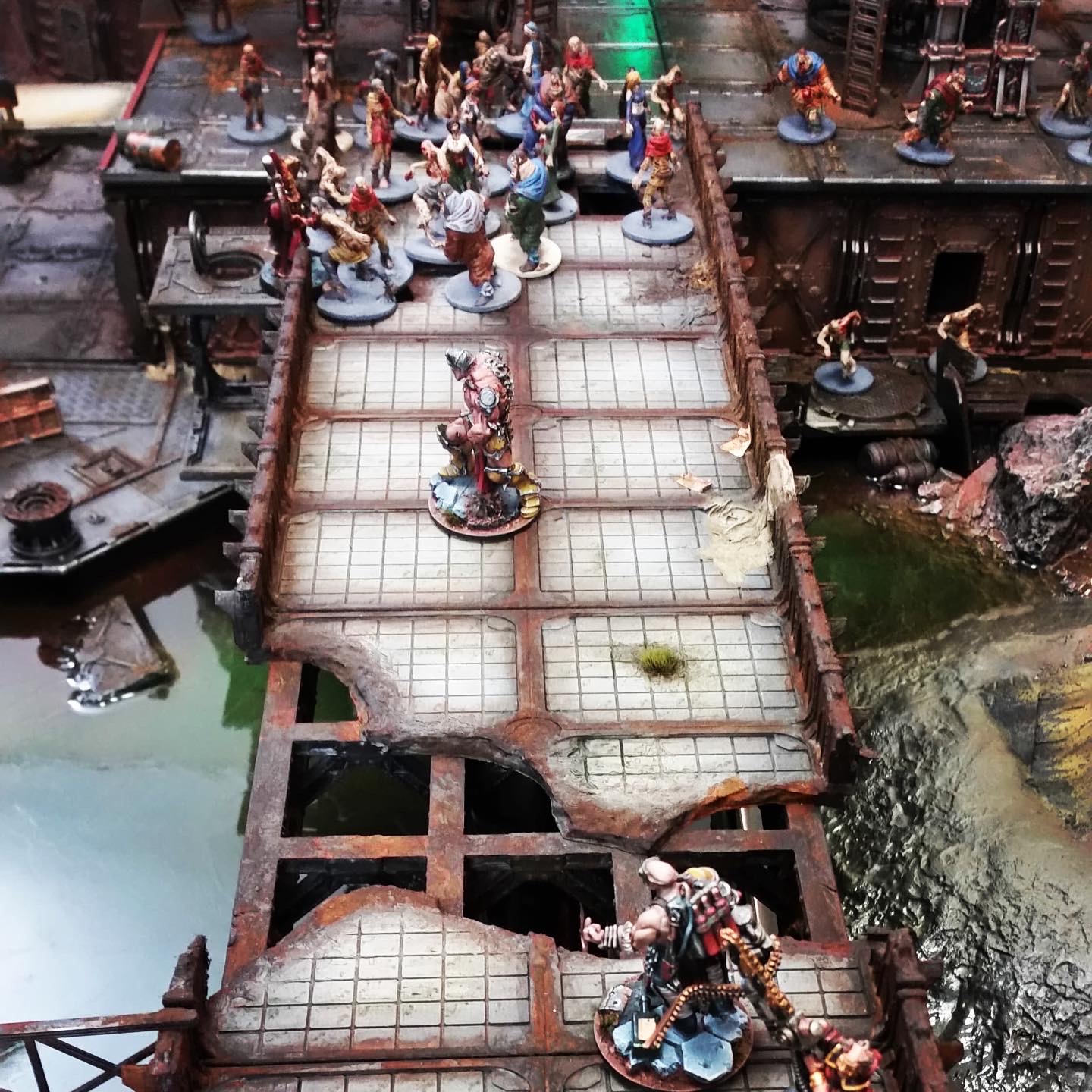 Cmon get to the drrrriiillll

Suddenly the horde slightly divert their attention to the tall pointed red hat of the Brotherhood leader. God knows where he had sprung from. The holy tome of the emperors word held high swatting away zombies with one hand and a chainsword slashing at their foul mutant flesh with the other. His voice steely. His resolve unfaltering despite unsurmountable odds. 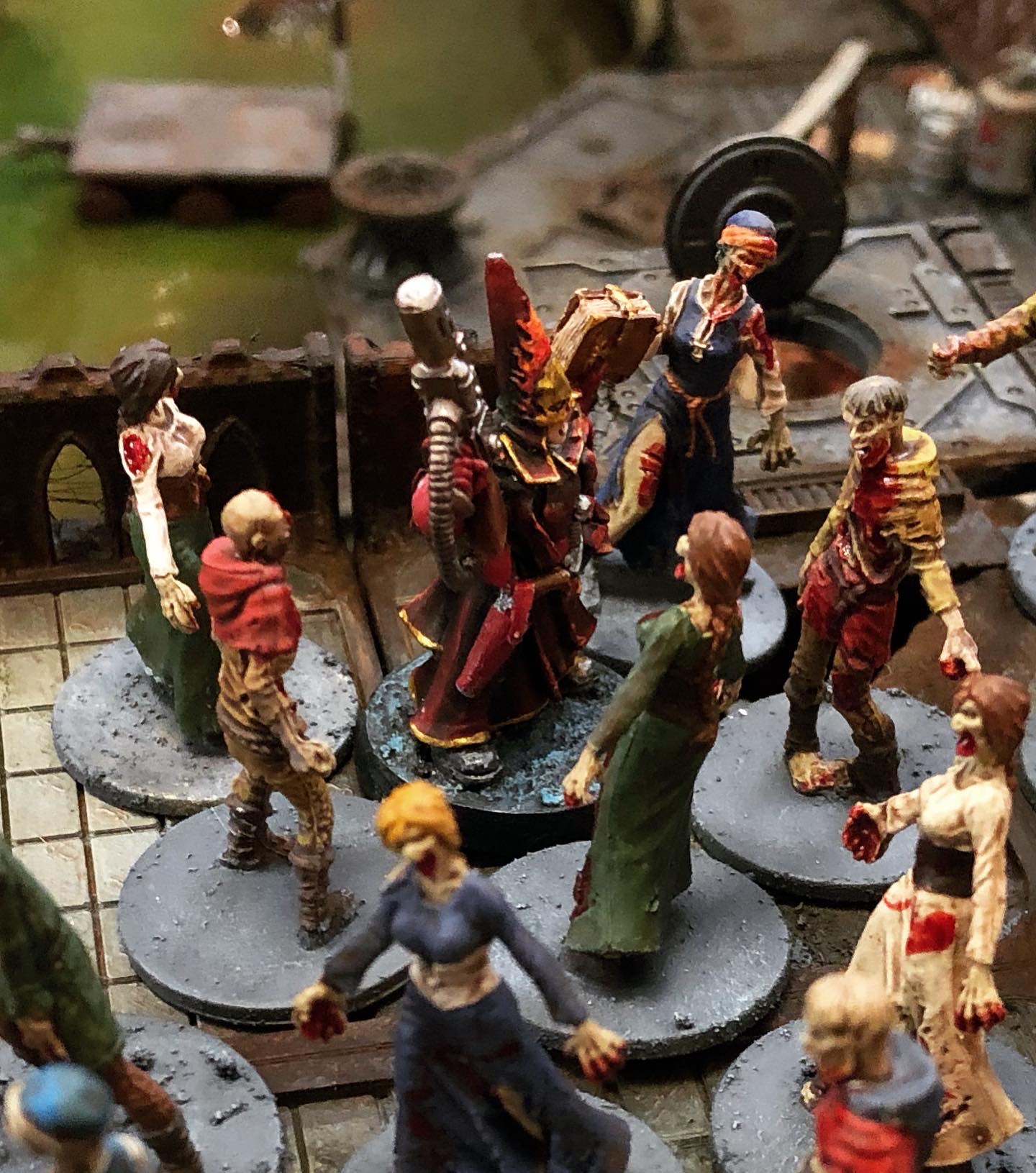 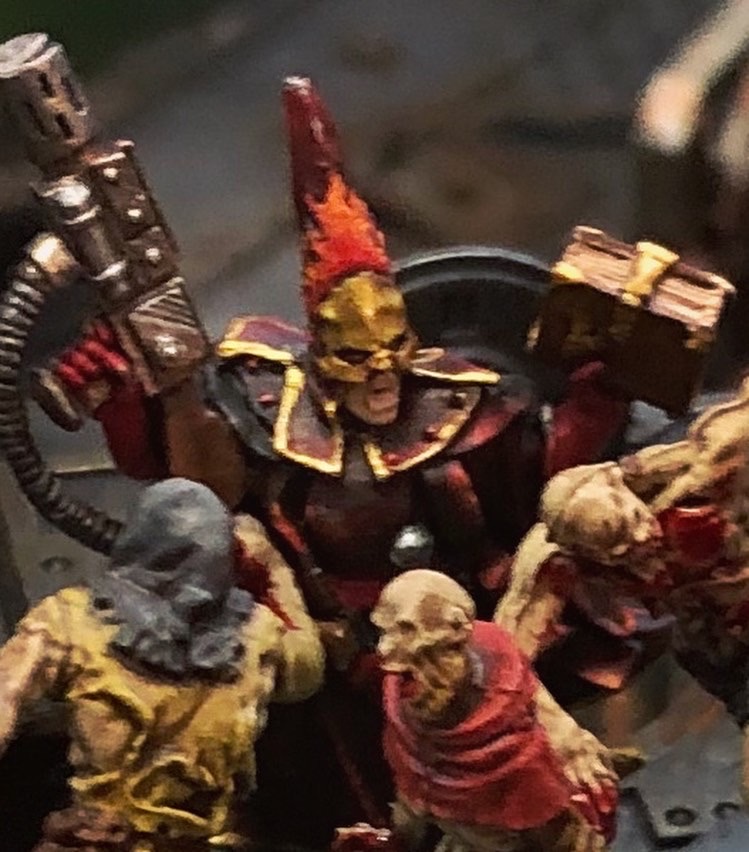 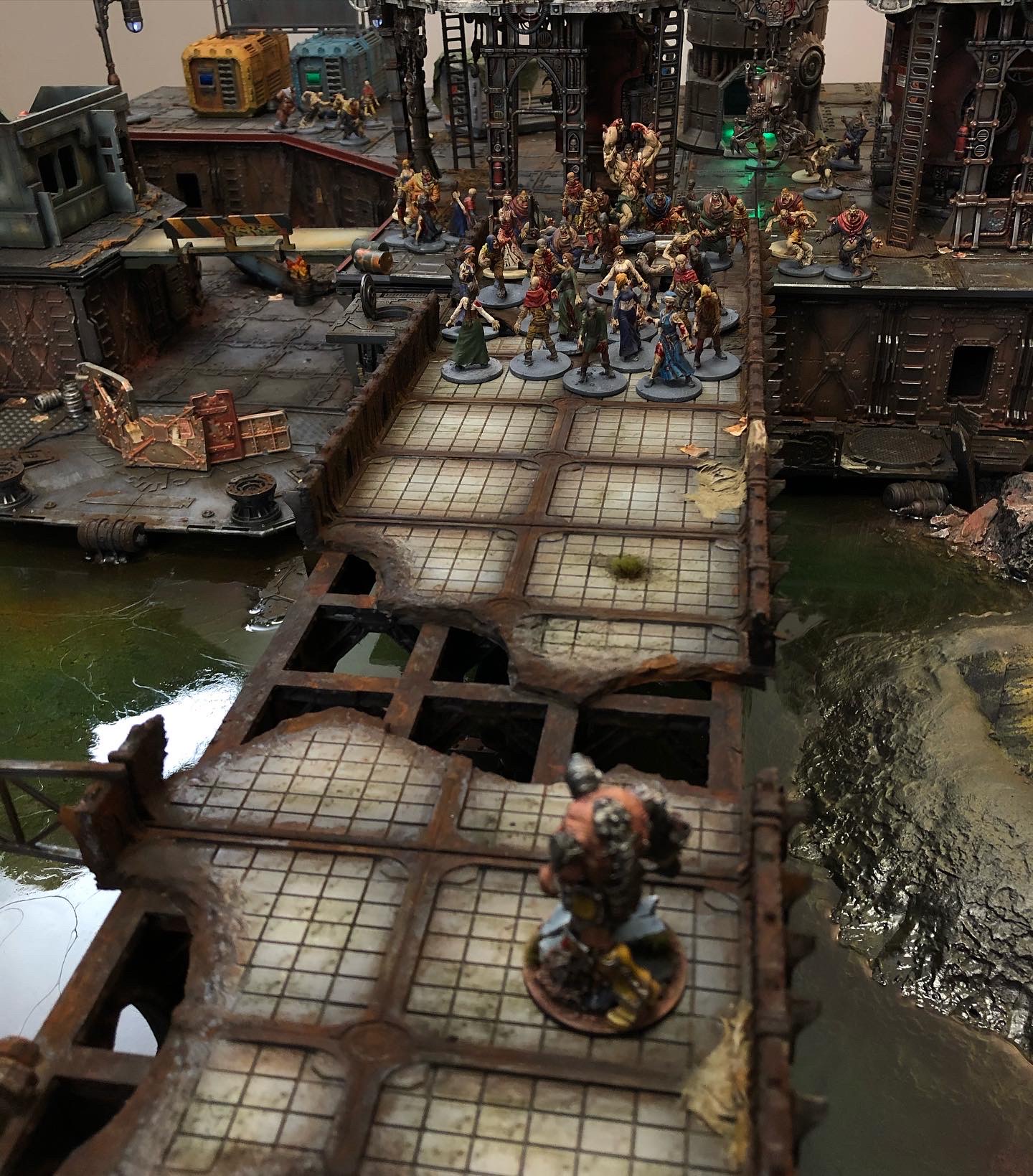 In mere moments he disappears in the horde but his voice carries through.
Reactions: CaptainDangerous, MusingWarboss, Ben_S and 3 others 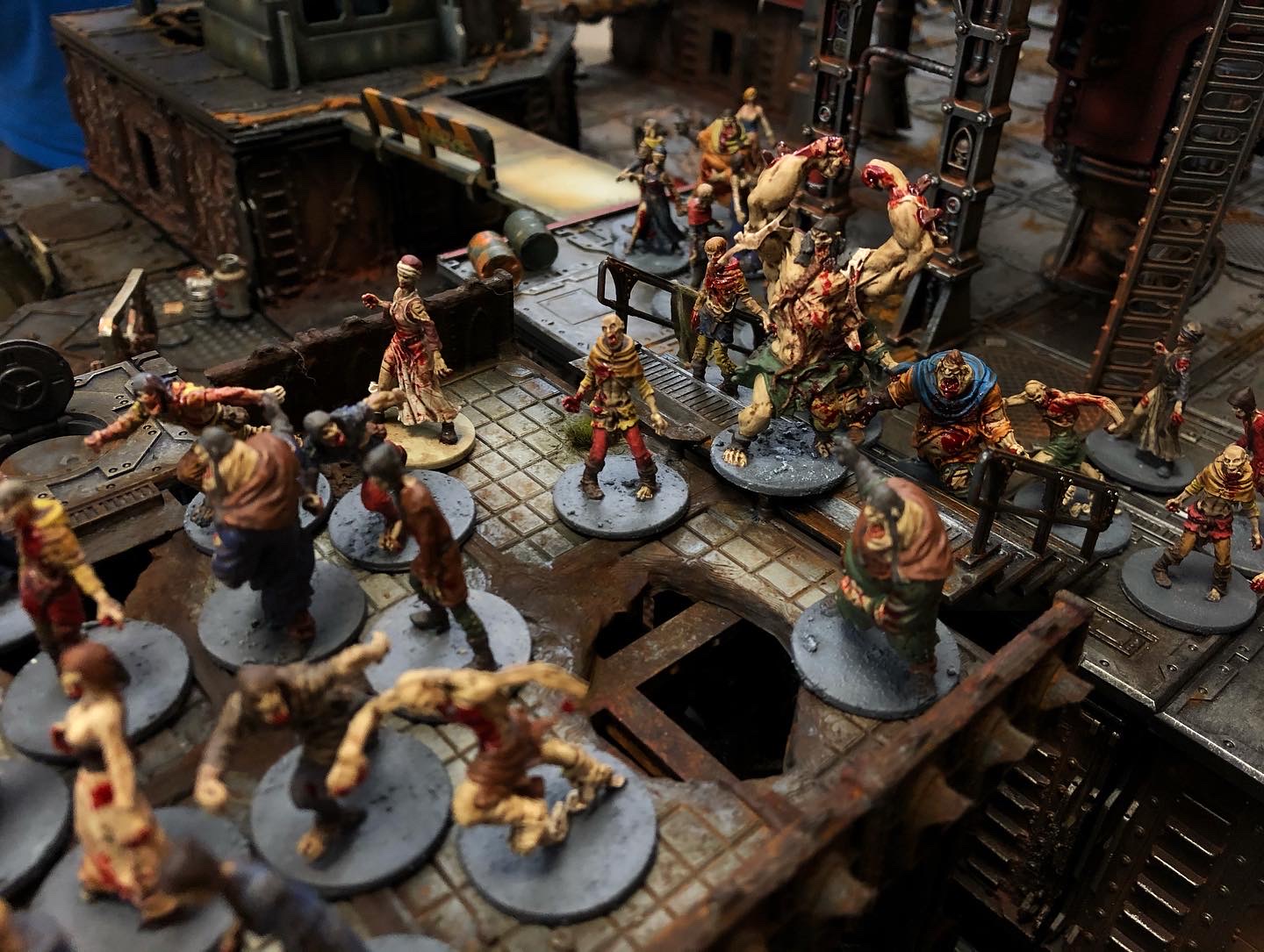 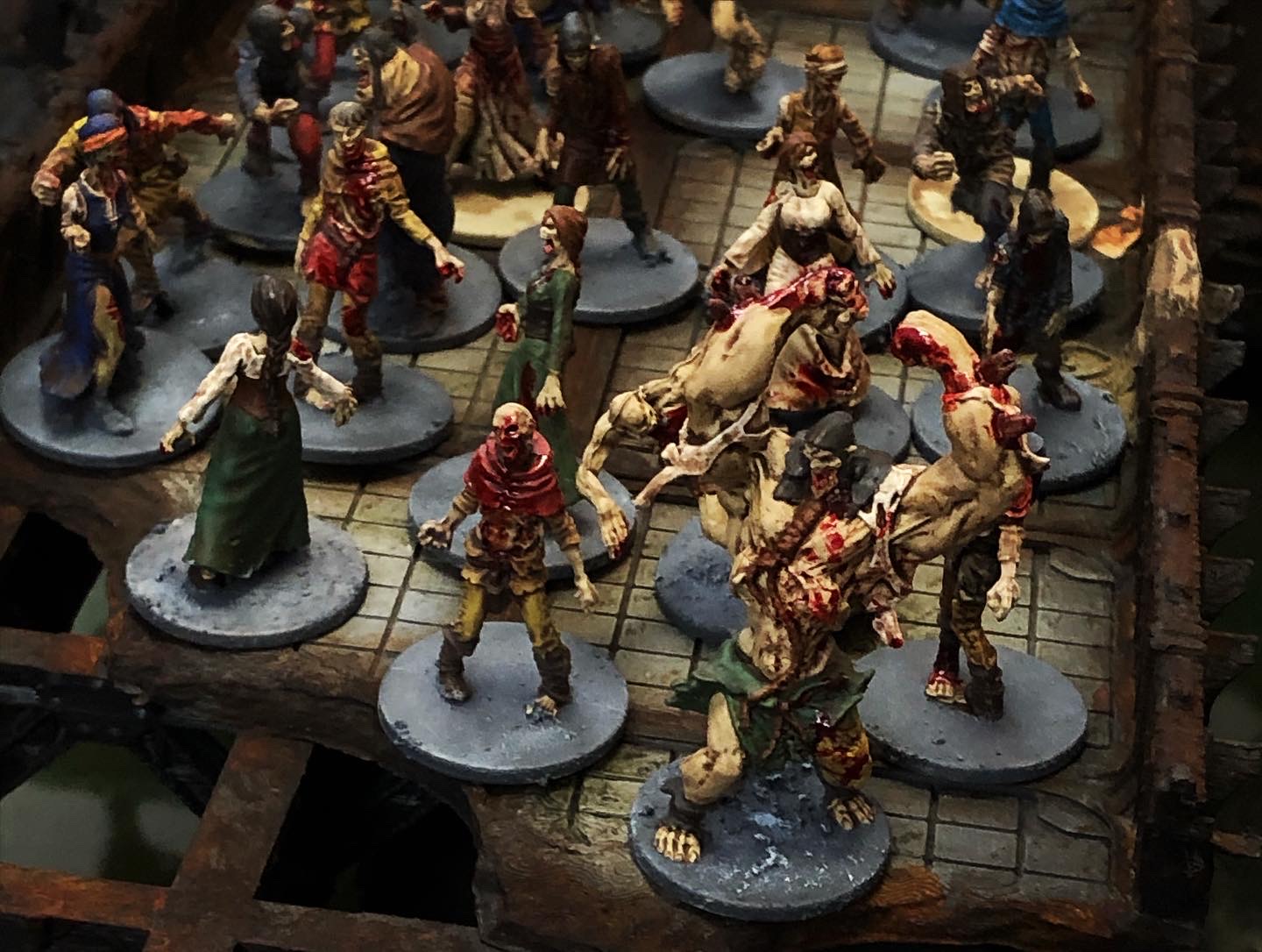 Without warning a missile lands right into the front of the pack absolutely obliterating the front line. Soon its followed by another.

“Fuuuuccck Yeah” Joe exclaims and he flips the zombies the finger. It seems despite taking some heavy losses a dedicated few Van Saar decided to help the last of the redemption and slaves cross the bridge. 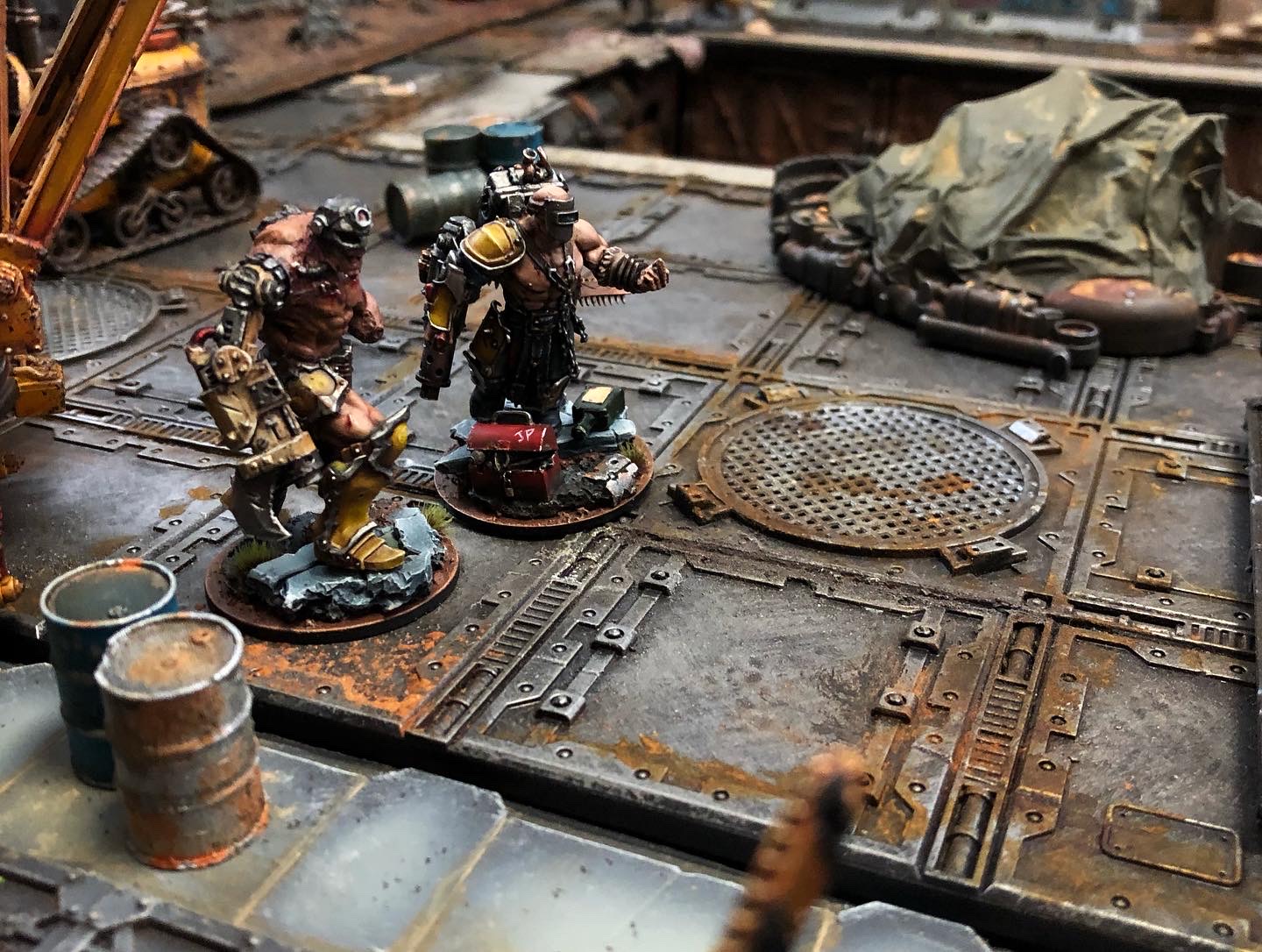 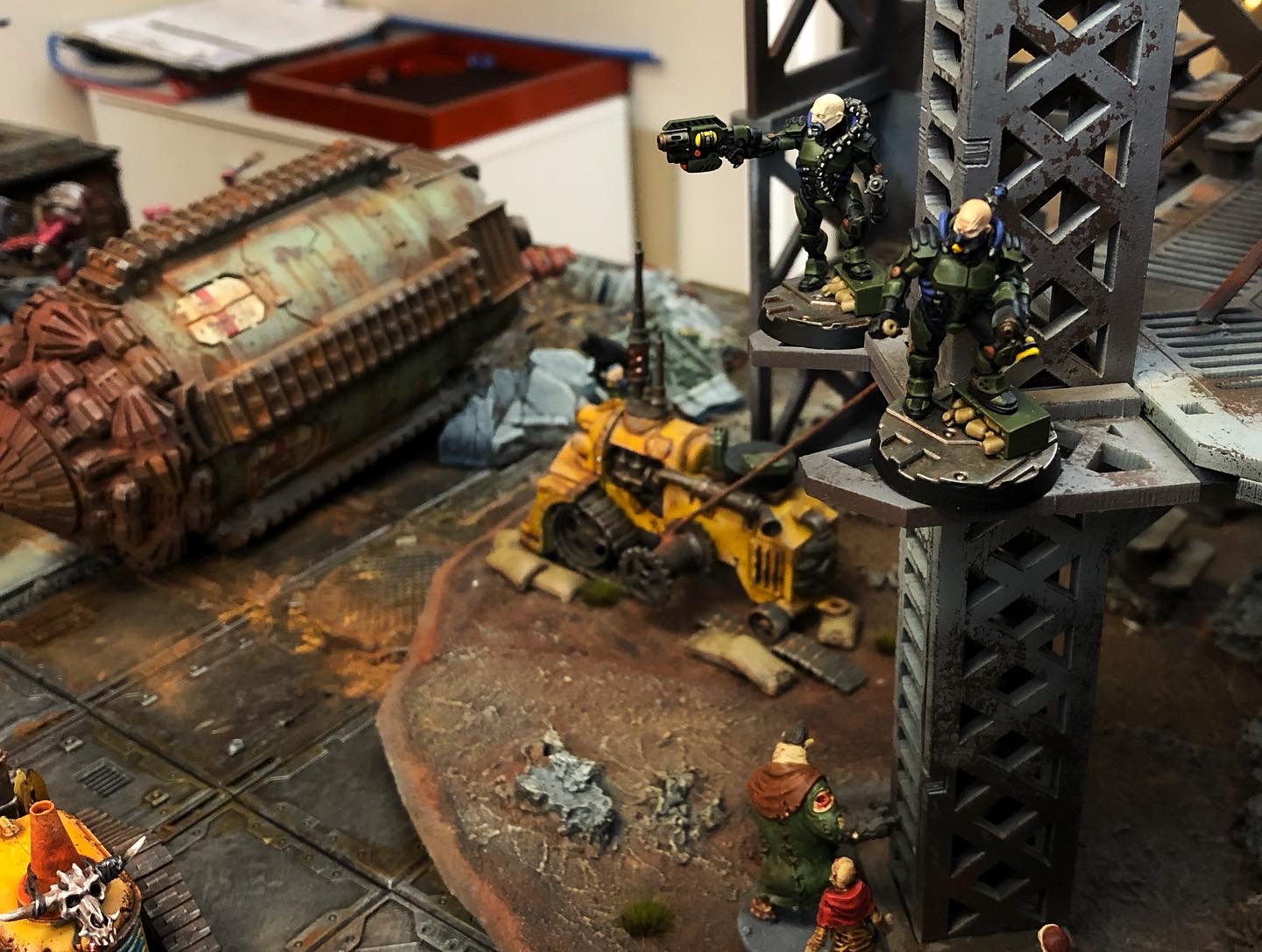 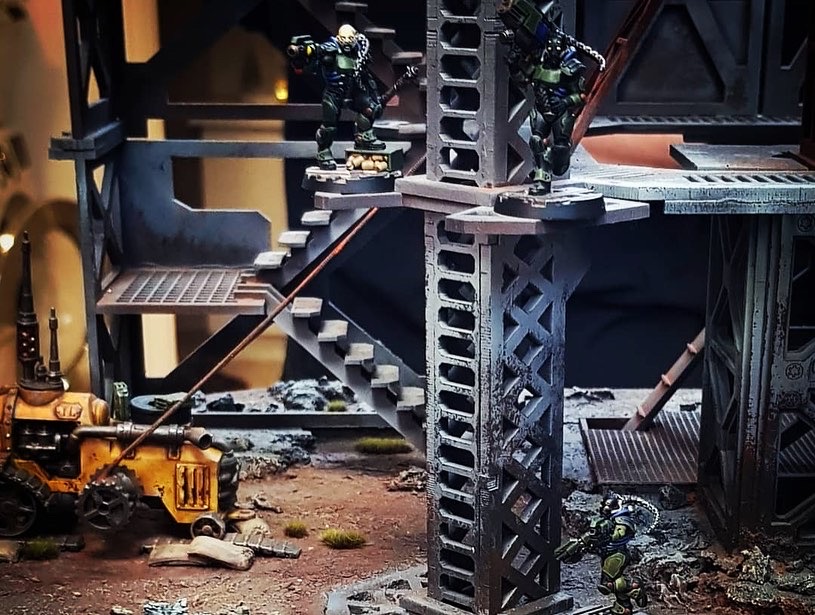 When the van saar player buys a rocket launcher for the finale..

Caulder helps Joe and Mean into the Drill and waits for the lone Van Saar gunman as he runs down from his tower. 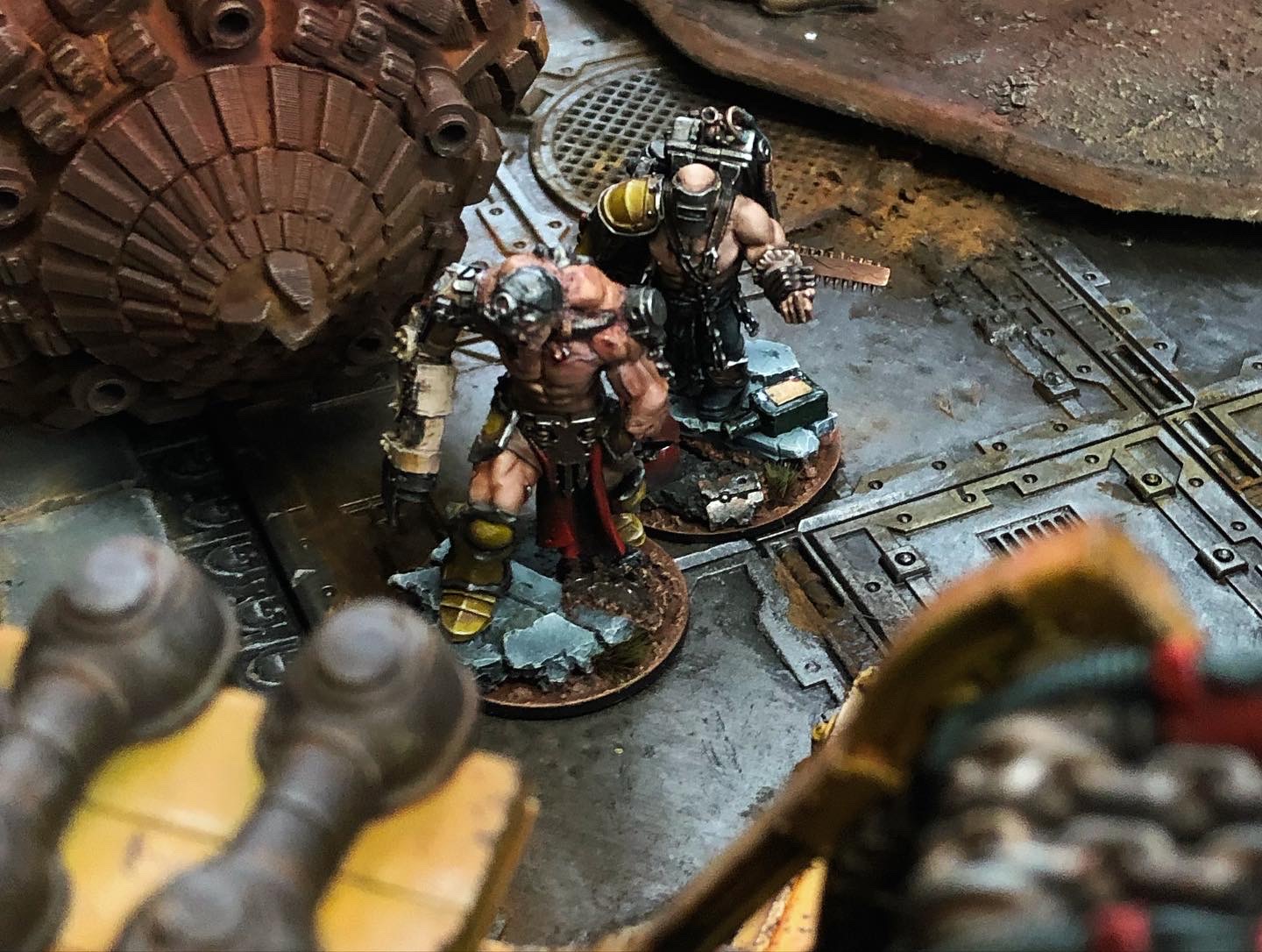 Get to the drill! 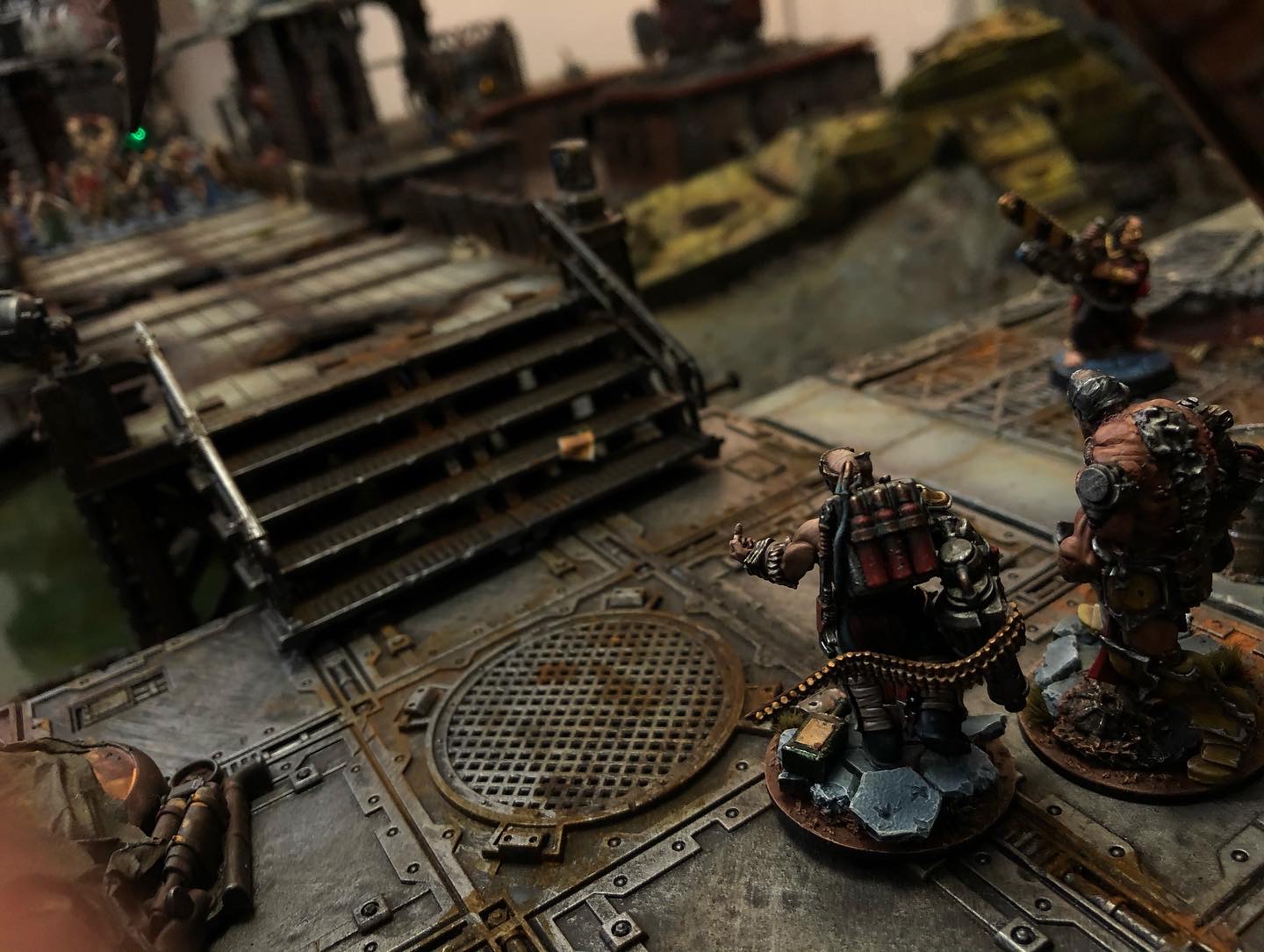 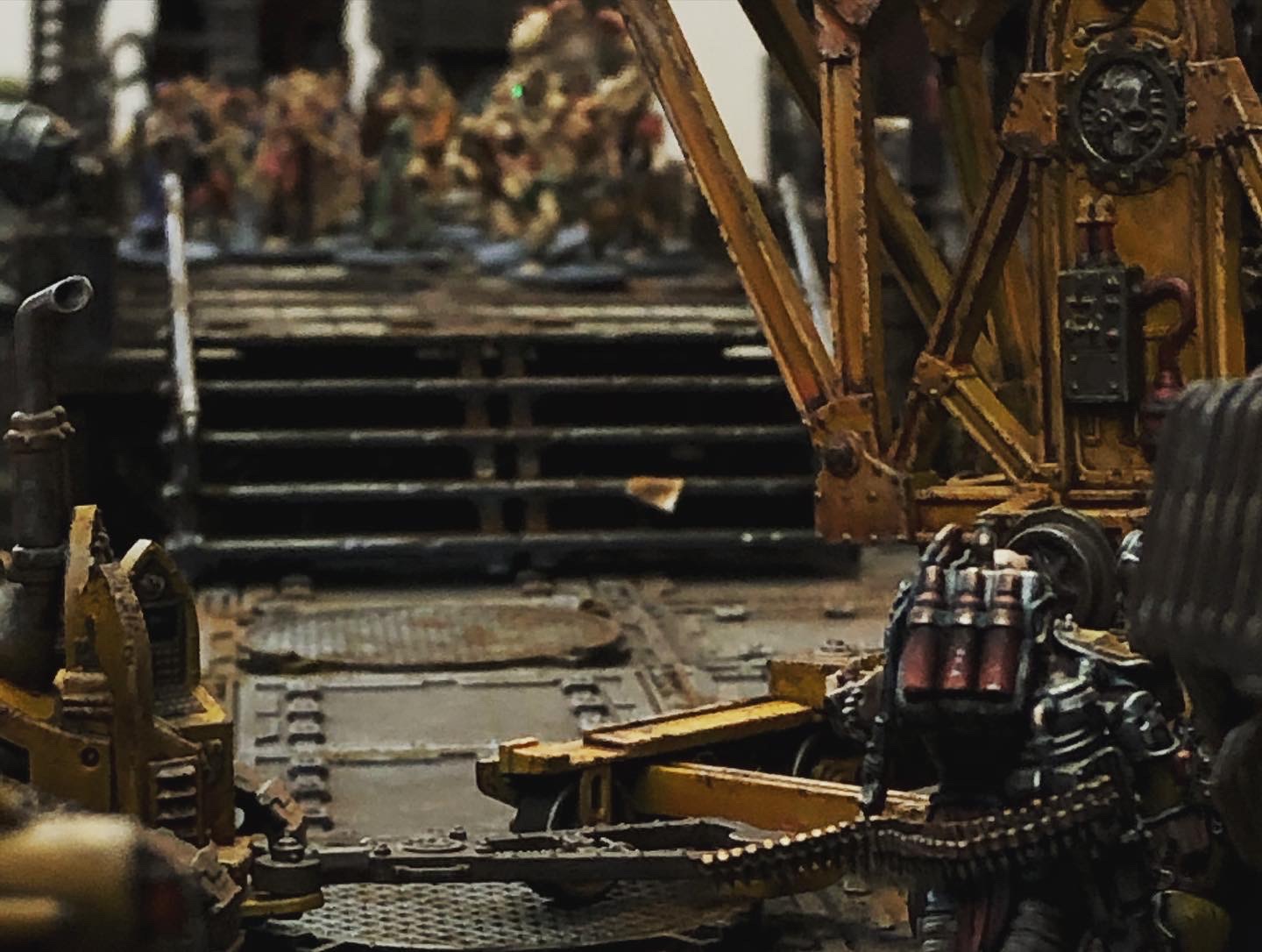 “What happened to the tech priest?”

“Fucked if I know boss, I think the other gangs smoked him!let’s get out of here. This place is collapsing!”

Caulder gets a nod from one of the van saar and a keen young brother with a golden sword, the scavvy skulking suspiciously quiet In the back of the drill. They close the drill doors just as it gets surrounded. The sound of beating fists and scratching claws softly heard over the drills motors as they spool up. A Van Saar pilots the rig with a barely conscious Ash assisting the helm.

Caulder surveys the wounded, the heroic few, as the drill begins its journey under the impenetrable dome walls. A strange and very rare few moments of empathetic elation and emotion. To be forever the unlikely heroes of this story. And one that likely no one will believe ever happened.

The release that Happy so longed for. A cruel and unachievable joke 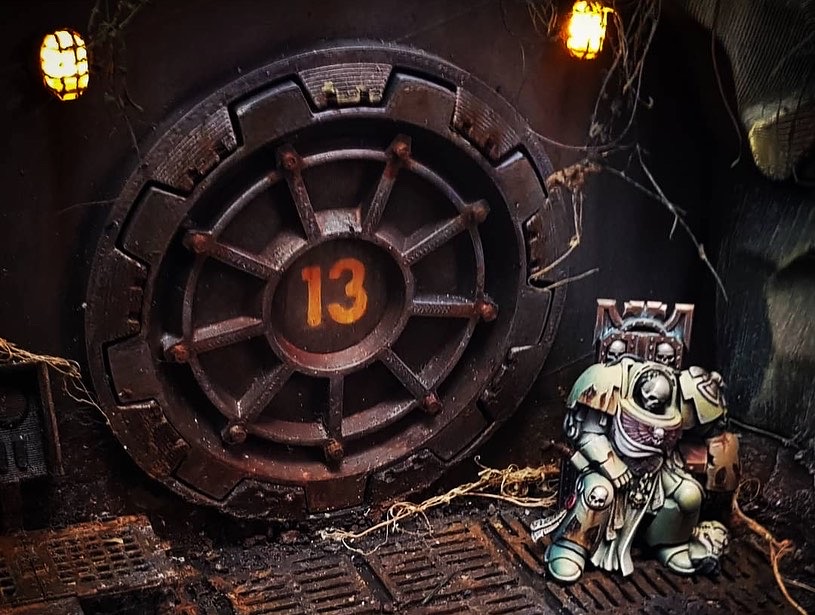 This is the kind of campaign most of us can only dream of being in. I'm in awe.

The Last Hope – Protect the Hive (Final Finale)
Music:
Gunther woke early, he had hardly slept, today was his big day. As he pulled himself from his bed, his letters rustled in his robes, his hands smudged from his latest one. He looked around at his sleeping brethren an eerie glow filtered through the church. His eyes settled on the kneeling figure in the centre of the church, Father Chester Minit, bowed, deep in prayer. Gunther quietly woke his brothers and they gathered around Father Minit. Waiting.

There was a deep breath and Father Minit spoke. “Brothers today we take battle to the enemy for the last time. If we fail, the world fails”. “Today we fight for family… for loved ones… for those lost in this carnage. We fight to protect what we hold dear … our people … our hive and most importantly for The Eternal One, The Burning Light, for The Emperor!”. He pauses. “Our glory we give to him, let him watch and delight in our offering. Brothers let us celebrate life by giving ours … come brothers let us save the world, let us bathe in his Warmth one last time.” Father Minit rose and set off out the door. Gunther and the brotherhood silently followed.

The Redemptionists entered from the South. Gunther peered into the expansive sump, covered with walkways, bridge, and toxic green water, it was the lowest level of the underhive. The air was damp. An unsettling moan radiated through the dark chasm. A disturbing shuffling came from humanoid shapes. The Pit Slaves, Van Saar and Scavvy had also arrived heeding Ashes request.

Upon the bridge, Ash laid injured, her backpack hanging, an iron guard protecting her. Below the bridge a dark figure, Vardos, was moving toward the vault doors. Gunther and three brothers were tasked to clear the way. Brothers Nik Ovtime, Ty Meeup and Father Minit to protect the rear and the remainder to assist. They readied their weapons.

From the west, more zombies appeared. “Brother Ty Meeup head them off! And watch for Vardos he is nearly at the vault door,” Father Minit directed. Unexpectedly a Scavvy flyer swooped to the bridge. Grabbing the backpack, it hurriedly rummaged through the bag and pressed the detonator switch. There is a pause. The sump started to rumble.

Vardos stopped and turn “You dare foil my plans?! Prepare to die!” he bellows. With a psychic blast he strikes Ty Meeup forcing him to fall into a crowd of zombies. Ty Meeup is quickly engulfed. Shouting Father Minit directs Nik Ovtime to defend while he takes a shot with his meltgun at Vardos. A miss. From above a krak missile hits Vardos wounding him. Swiftly Father Minit re-aims and shoots. A beam of light pierces Vardos then explodes out his back. A direct hit! Vardos falls into the toxic sump.

Father Minit is then surrounded by a horde of zombies. Drawing his chainsword Father Minit defends himself, bellowing to his brothers “Keep pushing forward! Vardos is dead, the Mechivore destroyed, we have succeeded! Go … I will keep these heathens at bay!” Slashing and parrying Chester roars “Gunther lead the brothers from this hell hole, I will protect you all!”.

Another missile hits the bridge decimating some advancing zombies, seizing the opportunity, Gunther hastily leads his brothers across to the safety of the drill-rig. As he enters the drill-rig, he looks behind to see Nik Ovtime fall, the red hood of Father Minit with bible in one hand and chainsword the other, slicing and batting away zombies. More zombies appear and Father Minit is overwhelmed. Father Minit falls into the toxic sump. With a great splash he disappears into green water.

The door is closed, and the drill-rig starts digging, the sound of beating fists and scratching claws can be heard over the motors. There is a strange truce between the fugitive Pit Slaves, Van Saar and Scavvy and the brotherhood. Gunther is now the leader of the Redemptionists. He reaches inside his robe to check his letters are still there. Father Gunther Lunch can finally deliver them himself.

The drill-rig leaves the sump and the zombies calm. They shuffle and amble searching for meat. A moan emanates through the dark chasm. All is quiet again.

A robed figure emerges from the water drenched, bleeding and torn. Arch Deacon Chester Minit hauls himself out of the toxic sump. Breathless.
Last edited: Jun 25, 2020
Reactions: MedMos and Draconic

Thank you @MedMos I tried to make it engaging. In the end i think most of the players wanted to move to the new edition and It didnt help that i stalled it a little with the terrain building. Overall i was really happy that the end came together well, and rather fitting. The scavvy player won the crowd rep award and the van saar player won best and fairest. Leif and i just got the cool hero moves at the end. It will be interesting to see what we can do with the new rules and a bigger playgroup now. We also have some new players who are more interetsed in writing fiction so that excites me.

Heres a final bonus video... Where are they now!?

Ungrateful bar stewards... No, I totally understand wanting to move on to the new shiny (as it were). I don't follow the new edition, but the promise of write ups is always something I look forward to.

Ok. Post up for fellow yakkers that were waiting for the Redemptionist story. This one took me many hours to write. Hopefully, you enjoy