Hey guys, I was flattered by the likes my gang got in the Newbie thread. I am really glad to have found this site and this community. The Necromunda hobby is exactly what I was looking for. This thread is for my finished stuff; questions and comments are welcome and greatly appreciated.

first up we have a tower or structure with lots of graffiti. 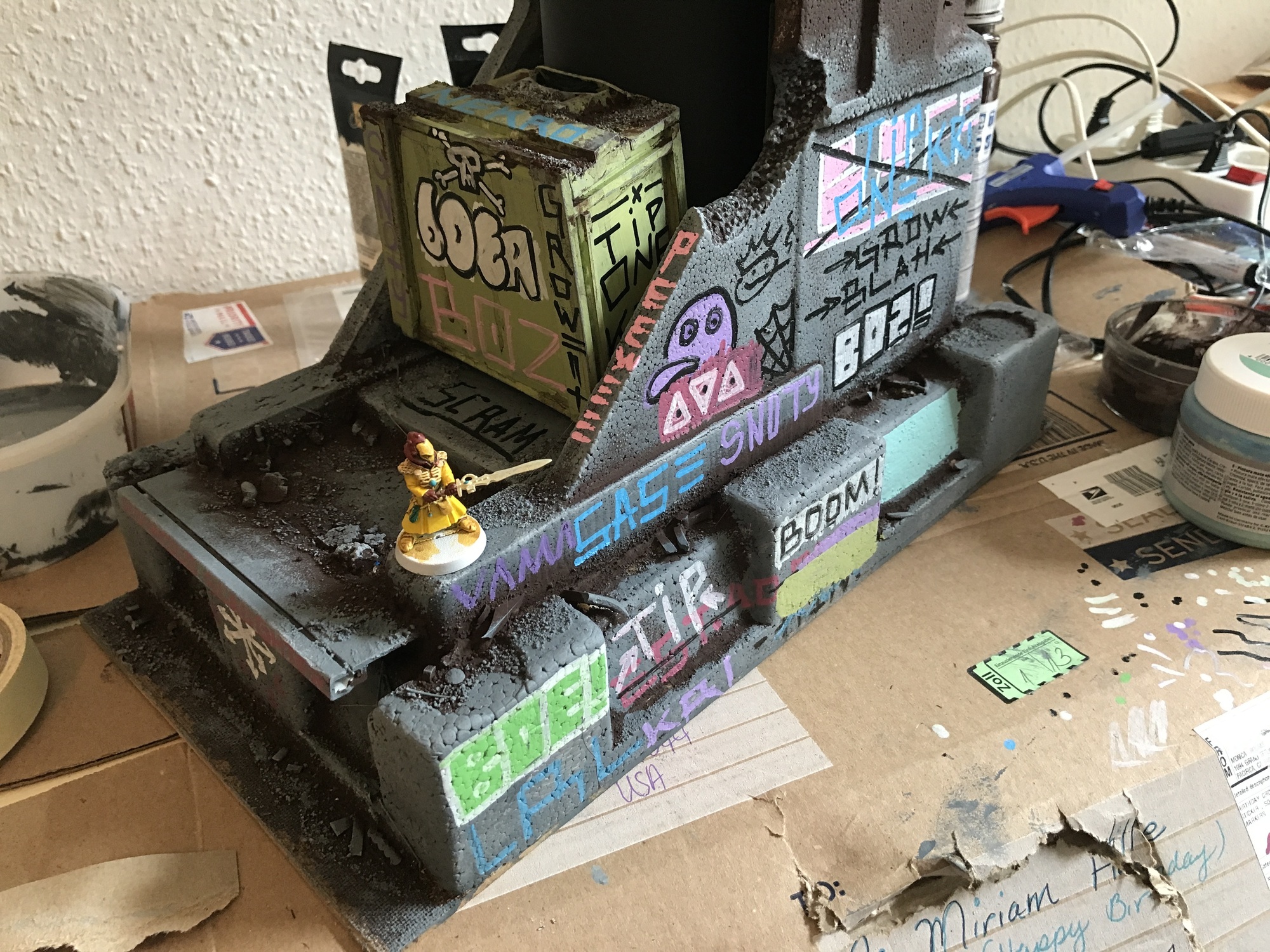 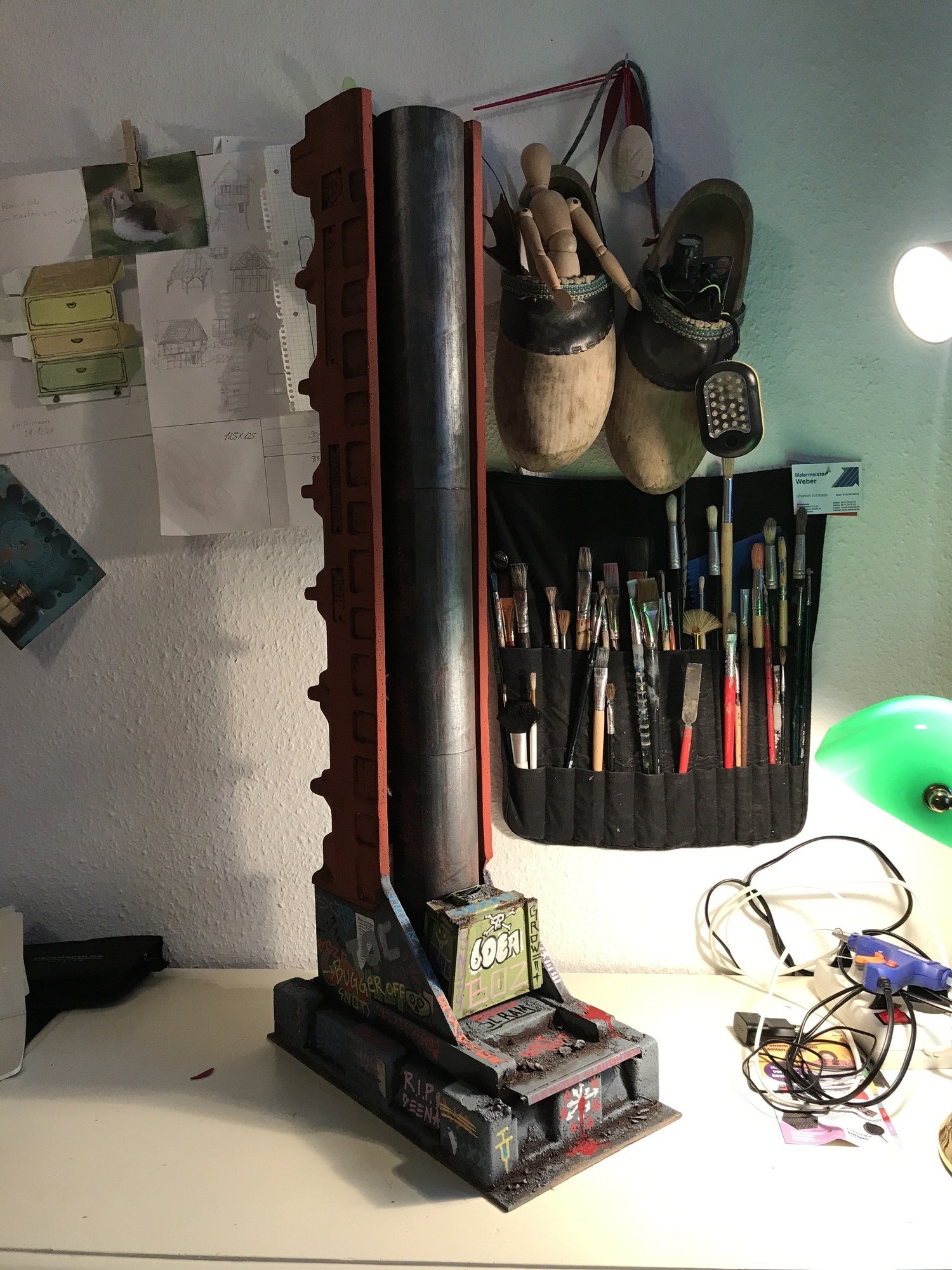 We played the scenario Urban Renewal from the Book of Ruin and this was the structure we had to destroy. 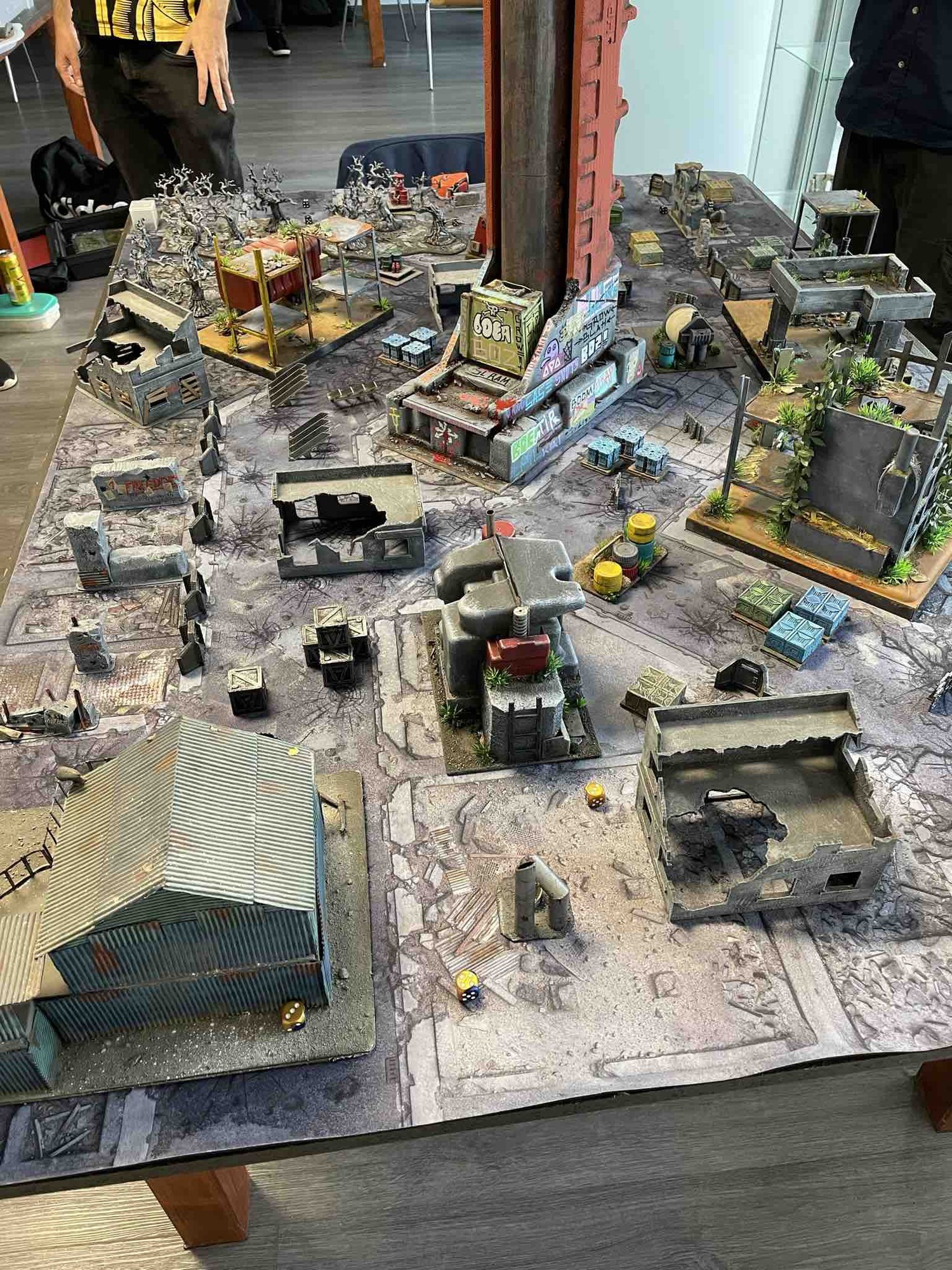 you can read more about our game and the campaign, Into the Unknown on our Clubs Website.
Moving on to the figures, arguably the most important part of creating a great narrative. I originally wanted to make a ton of different minis and GM a sort of Blanchitsu/INQ28 one-off game, but in the end I got connected with a few other 40k/WFB guys that wanted to try Necromunda. And thus, my INQ28 warband became a Helot Cult. 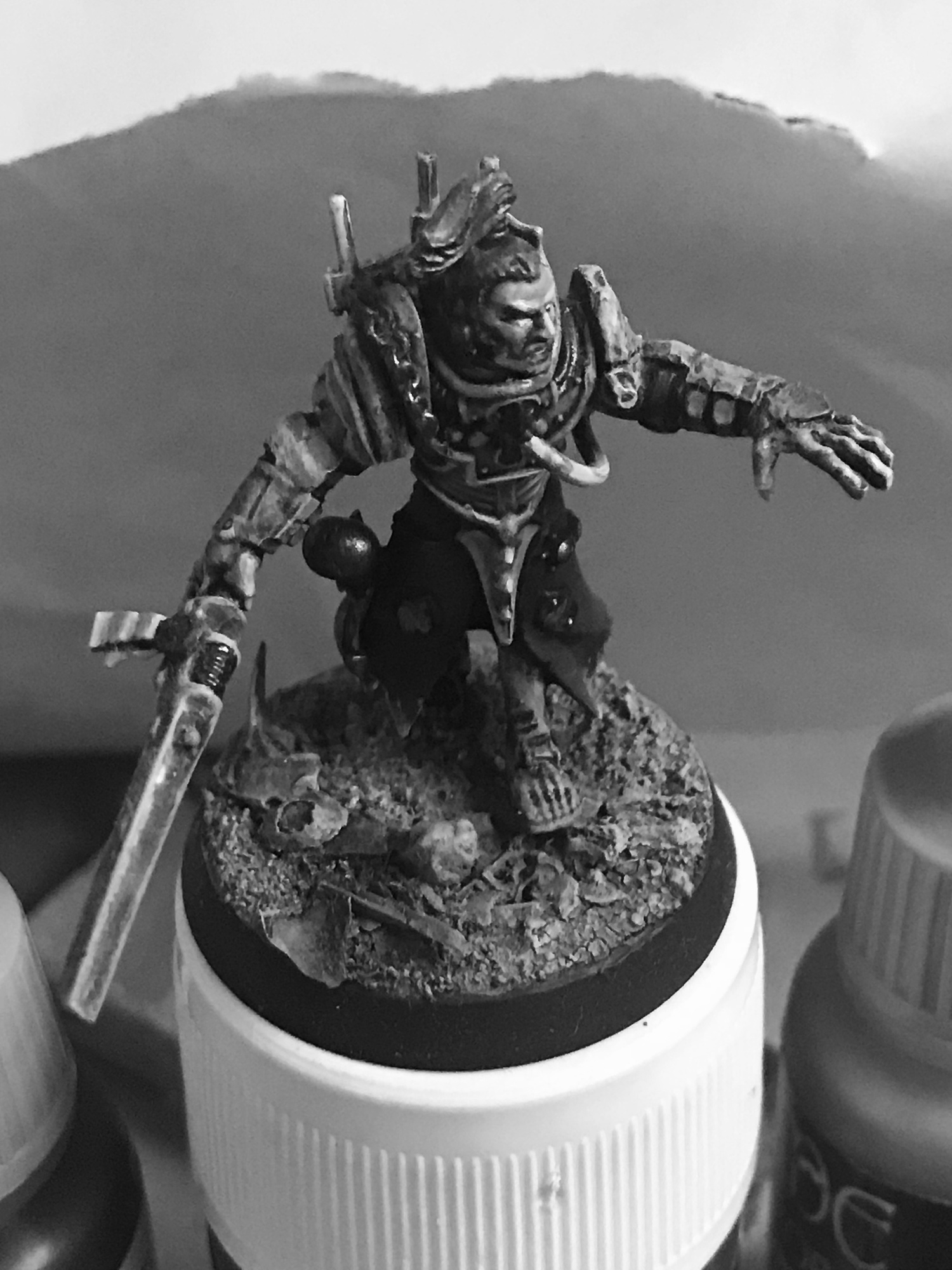 This is/was my radical inquisitor and current Demagogue. An outcast acolyte left to rot in the underhive… 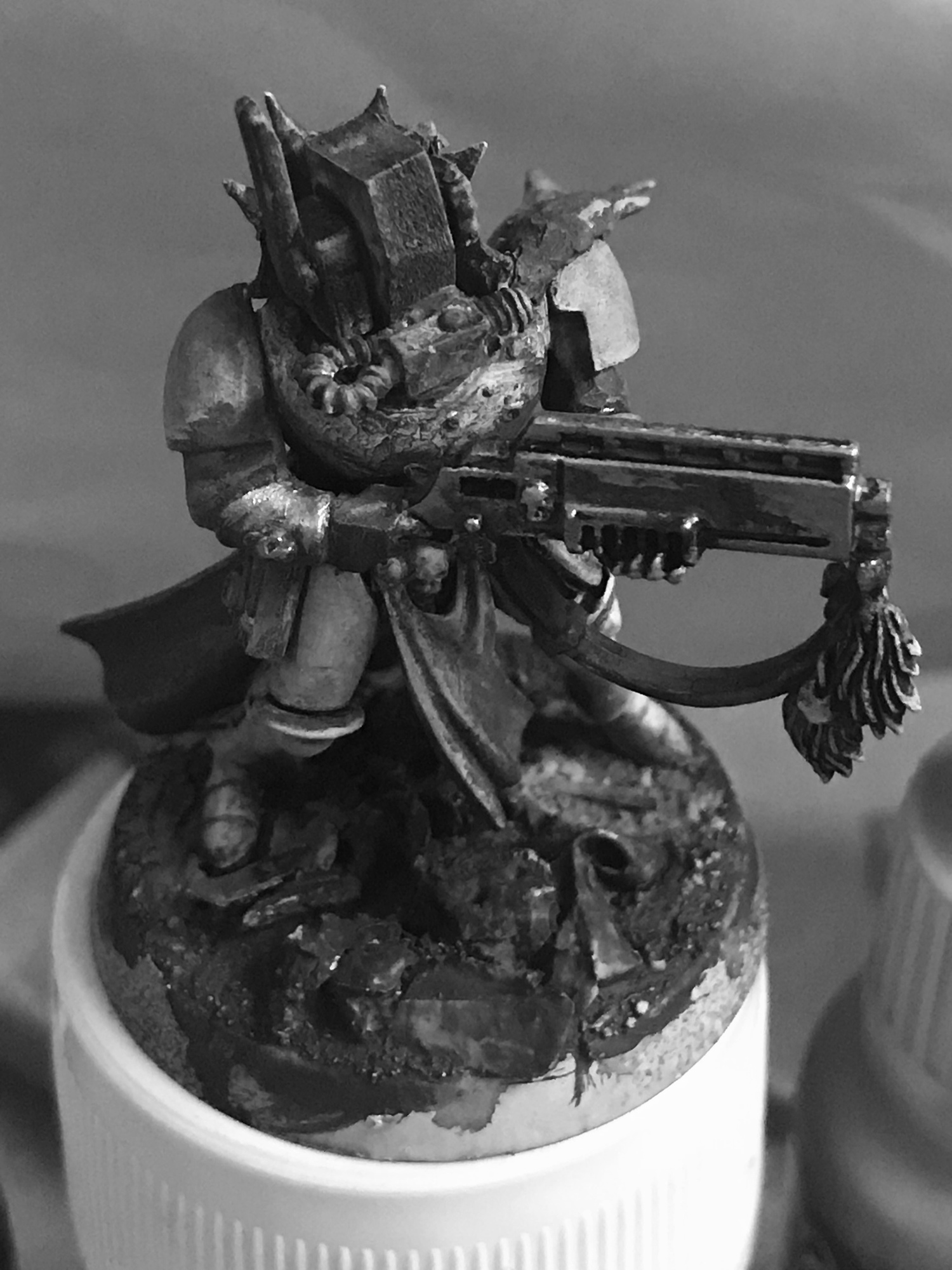 One of my Disciples, with a shotgun. A deserter, renegade and road agent. His head is a piece of rigid foam with a few bits cut off of T’au weapons and an AdMec backpack. 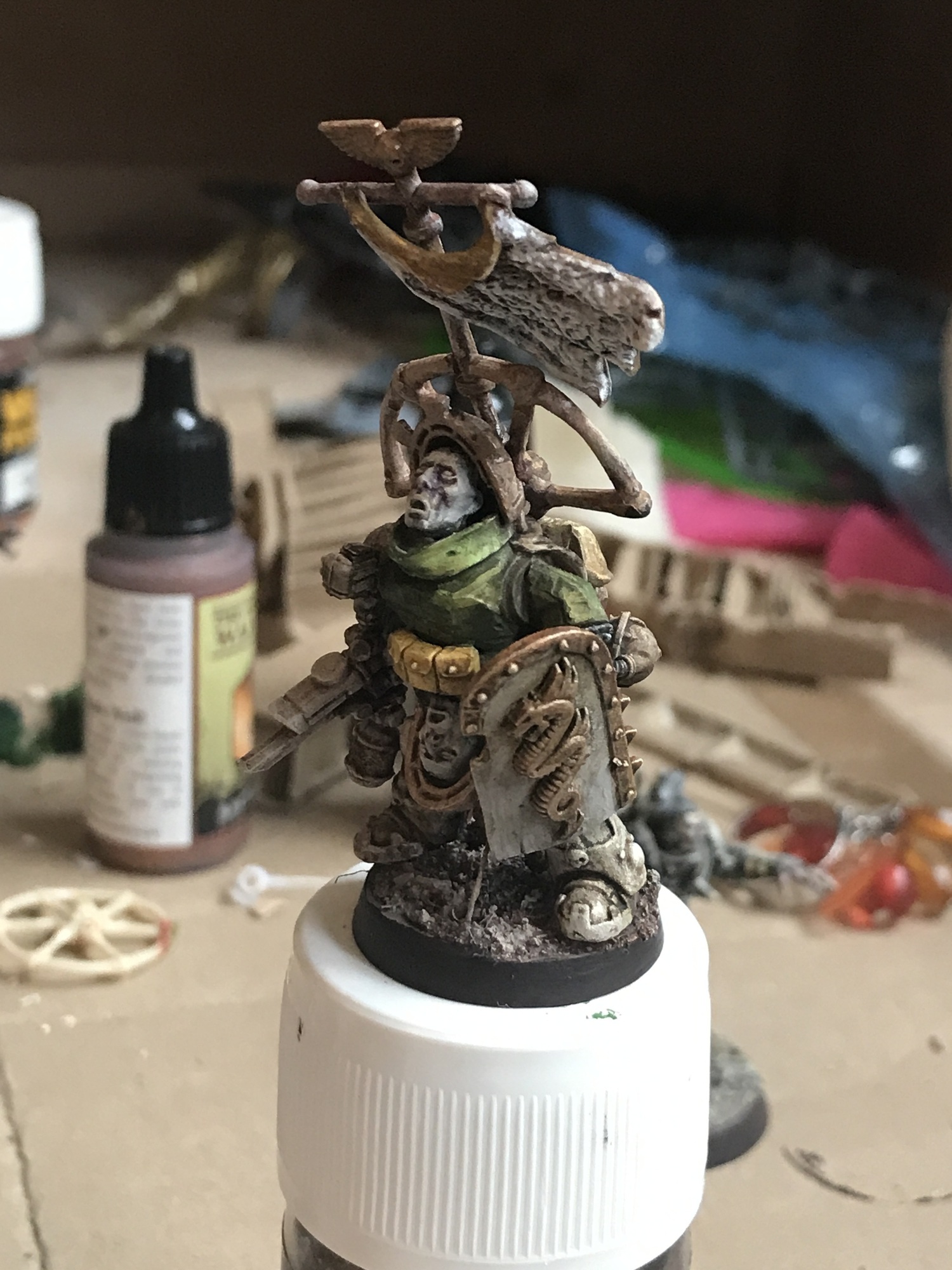 My idea for this guy is that he is actually a pair conjoined twins, each with savant-like abilities that contradict one another at times. I use him as a heretek in my gang. 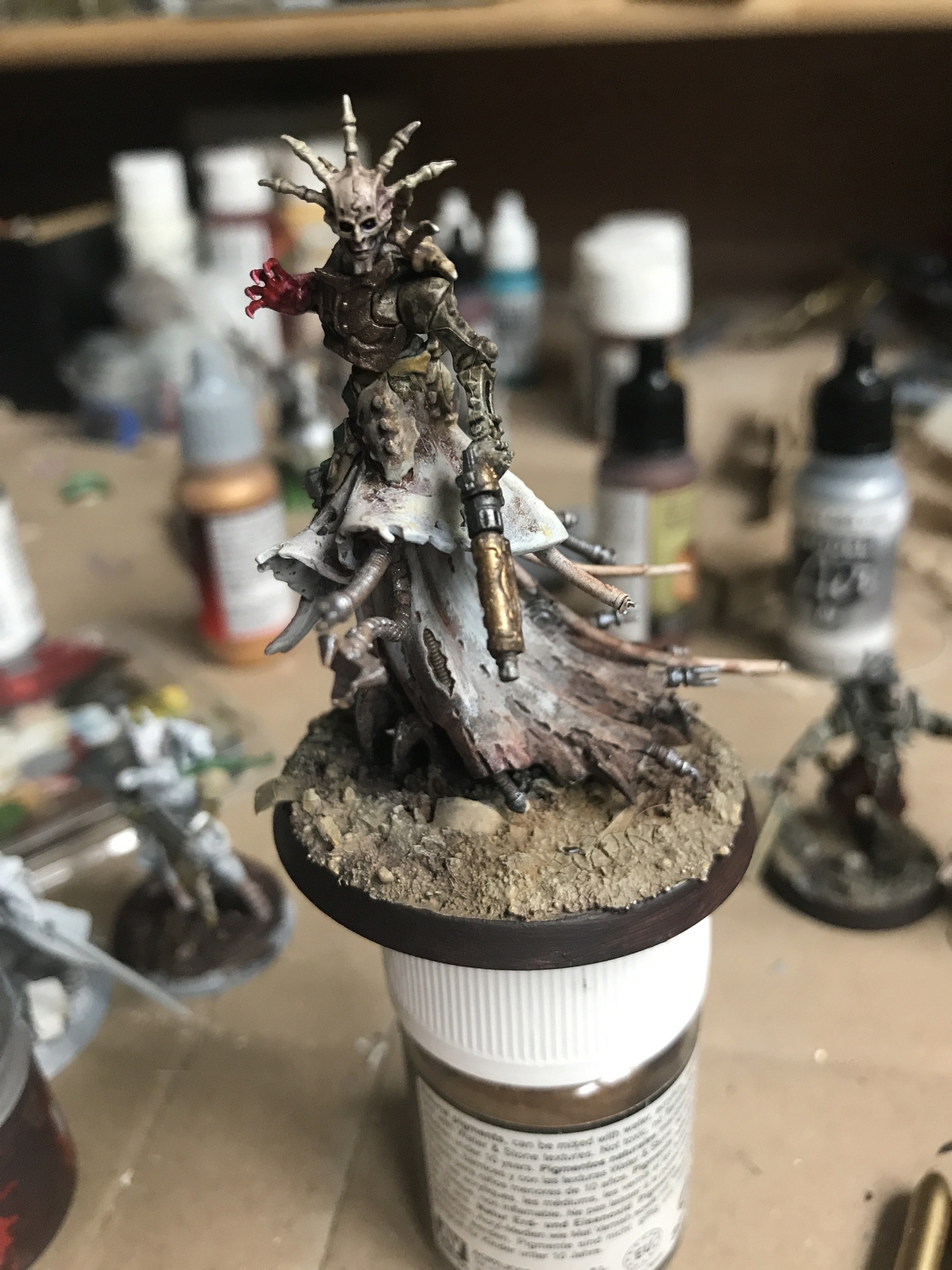 As I mentioned before, my plan was to use this figures in a single big game. This would have been the villain/nemesis of my inquisitor, but in Necromunda he is a cult witch. This is really my favorite guy out the bunch, because it is the first figure I have made that truly frightened me. Too bad he is a real zero in-game. 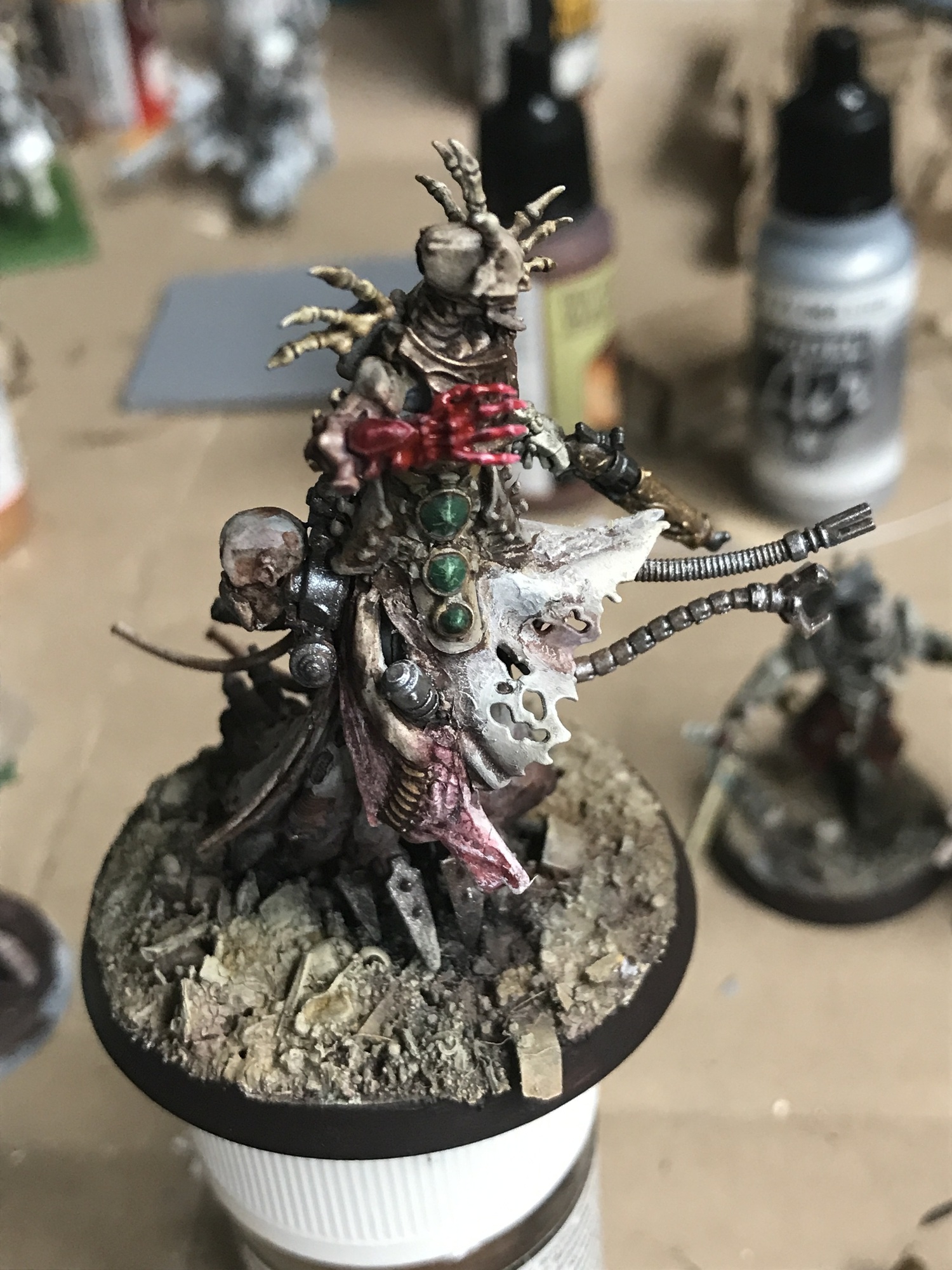 More terrain. I built this during the lockdown at some point, back before I got into the underhive aesthetic. Jungle plants and ruins are synonymous with 40k (I got into it back in 2000)… 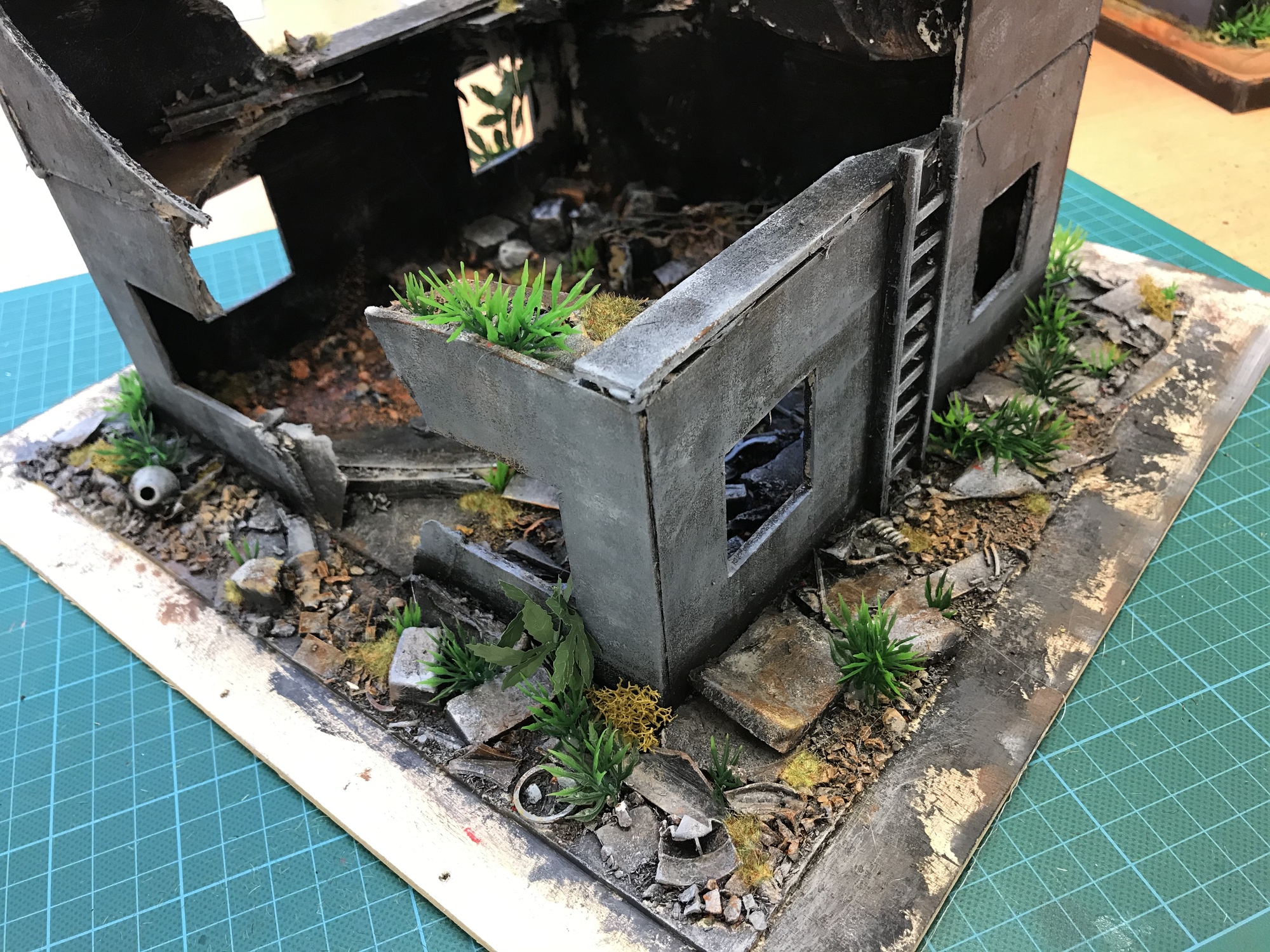 That’s the first few pictures. I have a bunch more and will try to post them when I have time. Have a great week everyone!
Reactions: GreyMatter, ClockworkOrange, Greenthumb and 15 others

Nice work! I think the Disciple with the funky head is my favorite. There’s something so odd about the head shape, but it works. It makes you wanna ask “what’s this guys story?!?”

Punktaku: thanks! Yeah, I think atmosphere is so important in this hobby. I like the new models for necromunda especially. Head swaps for example, can change the entire look of the gang.

Here are two gangers. Many of the models I use in my gang were built from Bitz-boxes I bought off eBay. There was some serious gold in there and I was able to create some unique figures. 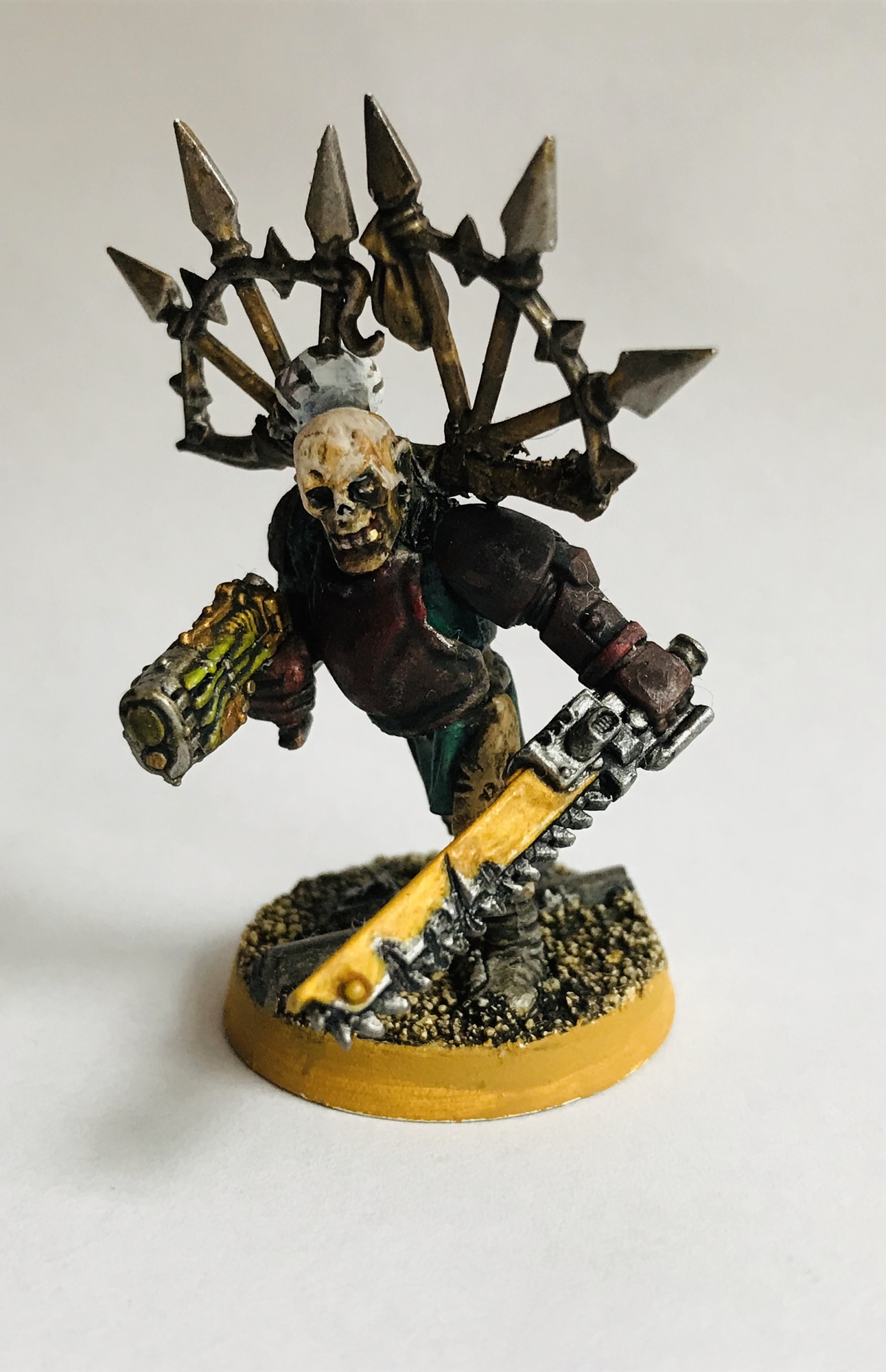 This guy is really special to me. I Love the idea of barbaric feral humans being drafted into the Imperial Guard, especially when they maintain some of their savage culture. I wanted to make him look battered and burned, a true survivor. 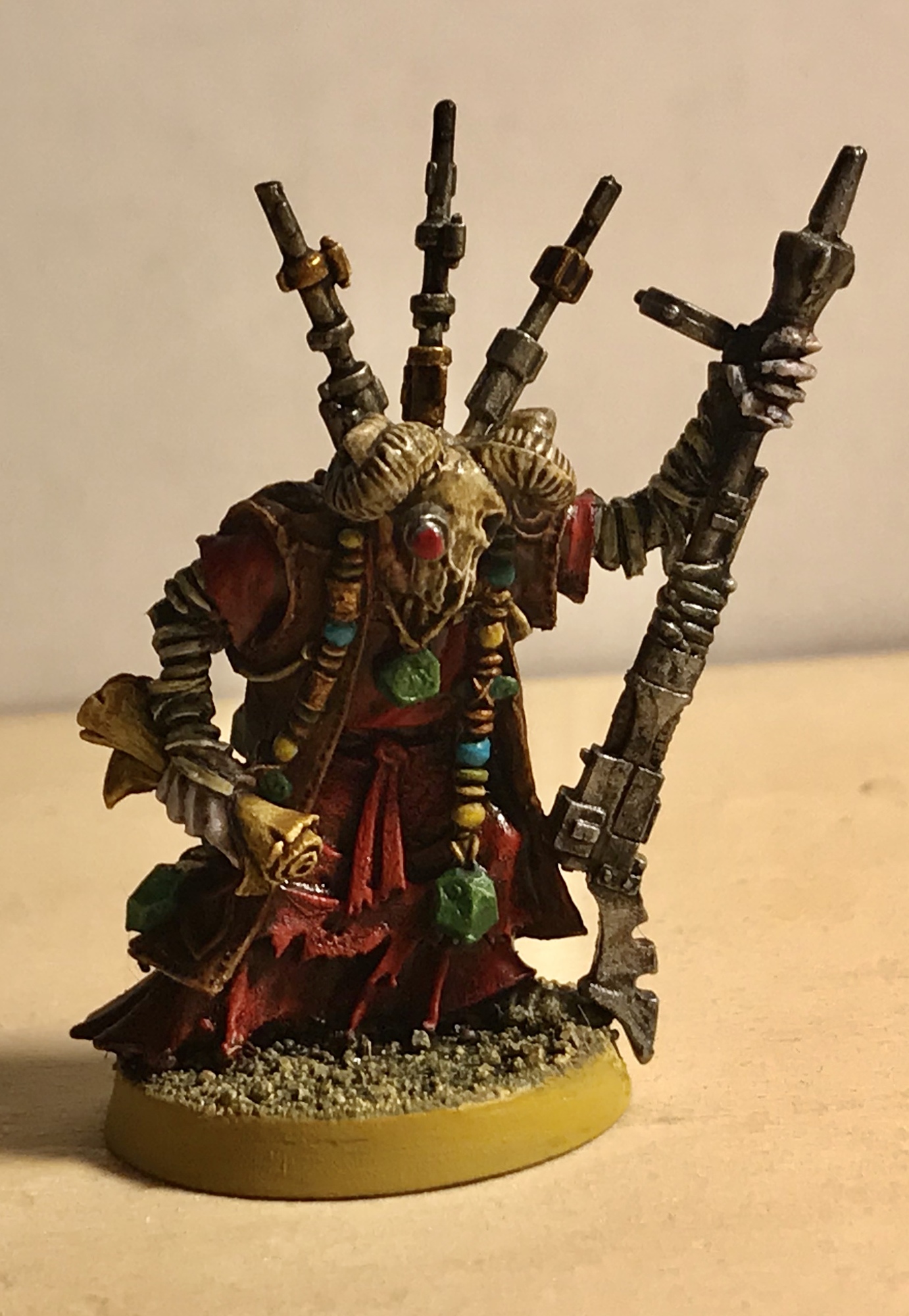 This sniper guy has since had two eye injuries and will now be stalking his enemies with a flamer. I‘ve converted another model to represent him now that he is irrelevant for shooting.

The bases on these two have since been redone with a technique I saw in Weirding Ways thread on Dakka Dakka. He uses scraps and bits of plastic waste from his conversions to base his models. The result is a polluted moonscape look where indiscernible junk is hidden beneath layers of dust and grime. It’s perfect for my vision of the underhive, so I have utilized for my terrain and figures, hopefully making it my own.
Reactions: BearsWillEatYou, Tiny, cainex1 and 4 others
M

That is some excellent terrain! I love all the details - nice work!
B

That graffiti would have been perfect for the current competition (YakComp #40) - shame that entries have to be new work.

Thank you. If the theme is fitting then I’d love to participate in the next YakComp. Does the project have to be begun after the competition is announced or could I take an existing WIP in a new direction? 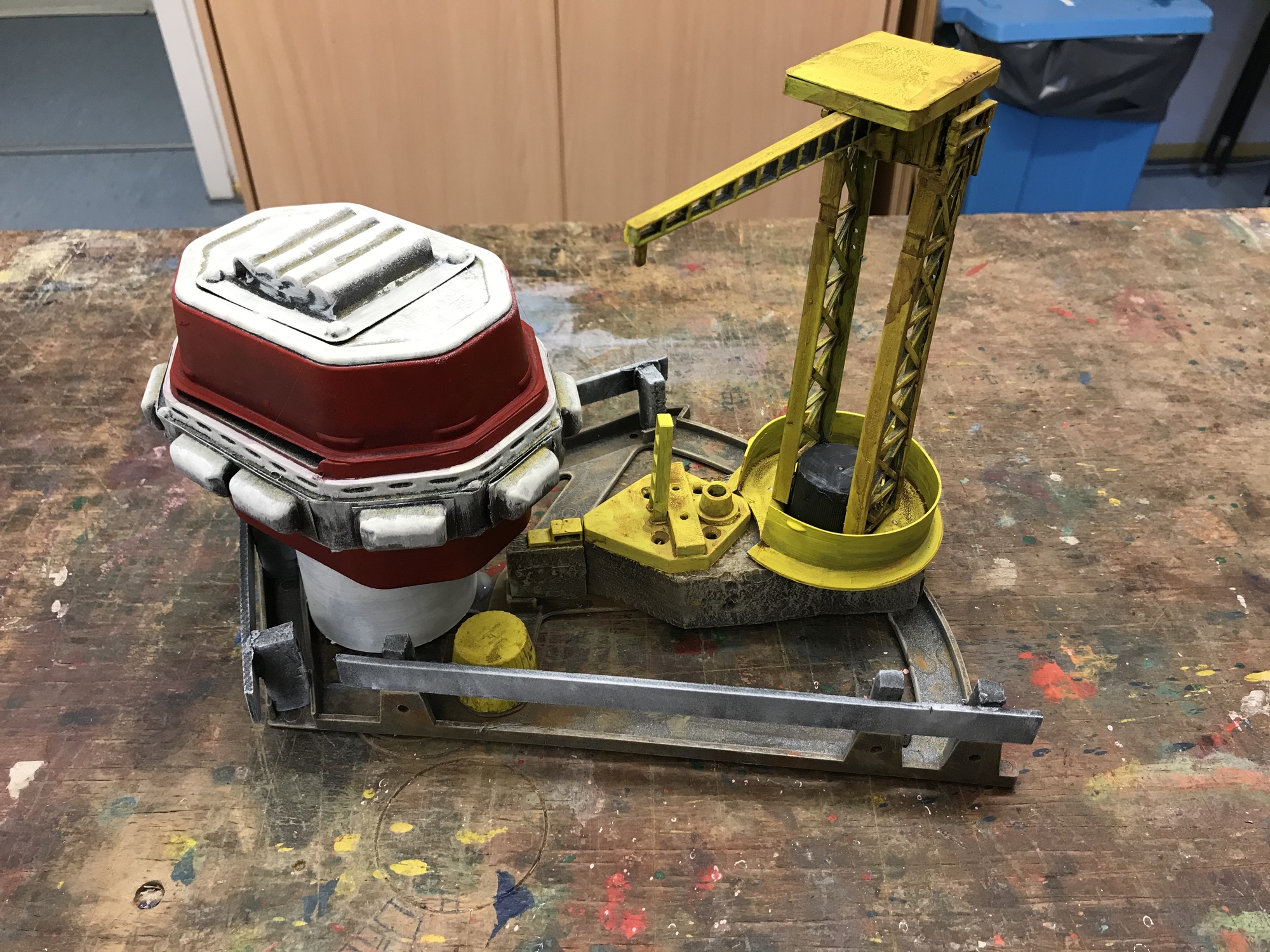 I haven’t based this one. I’d like to keep it as is in case my dream of a fully modeled terrain board comes to fruition… 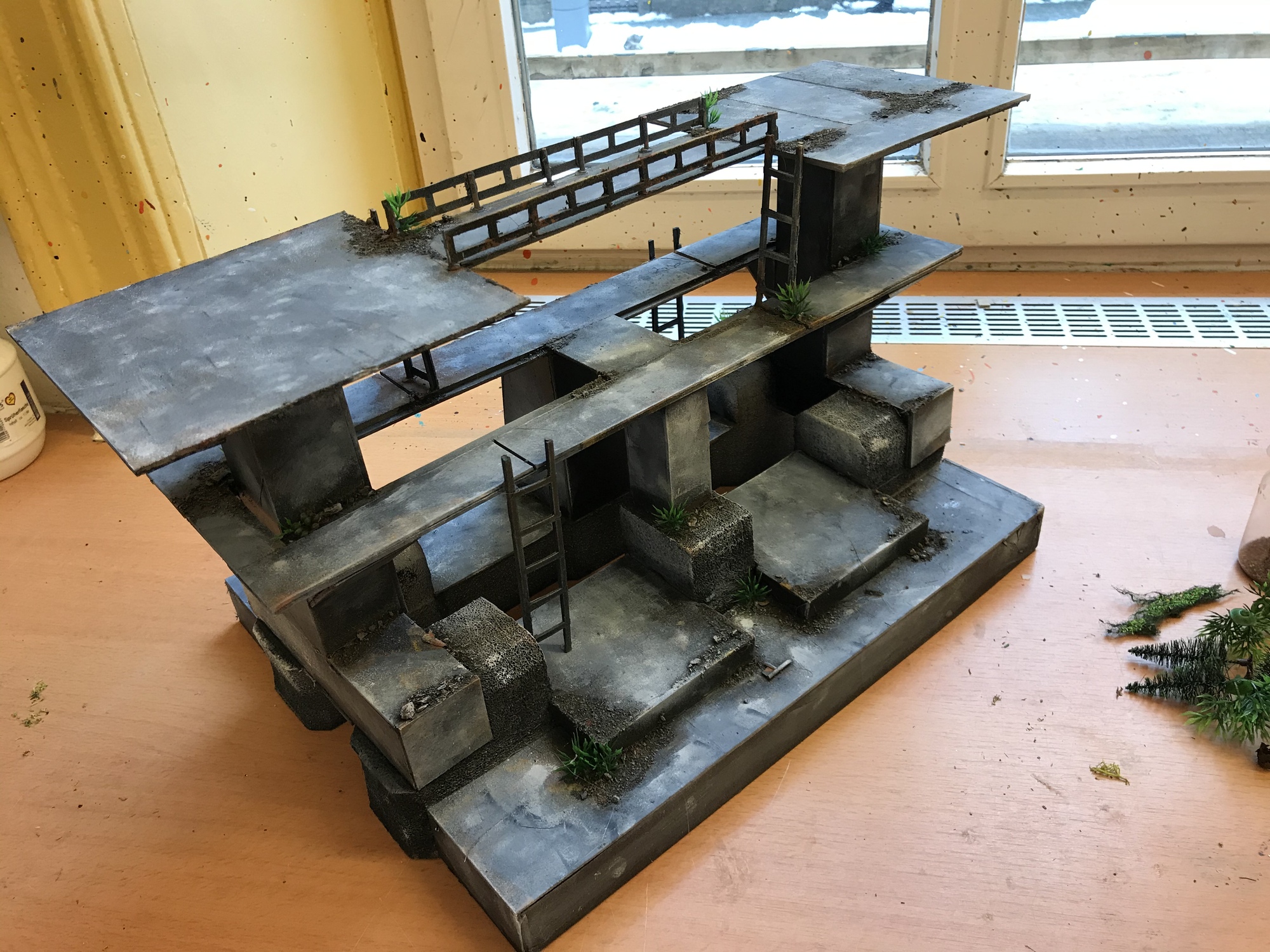 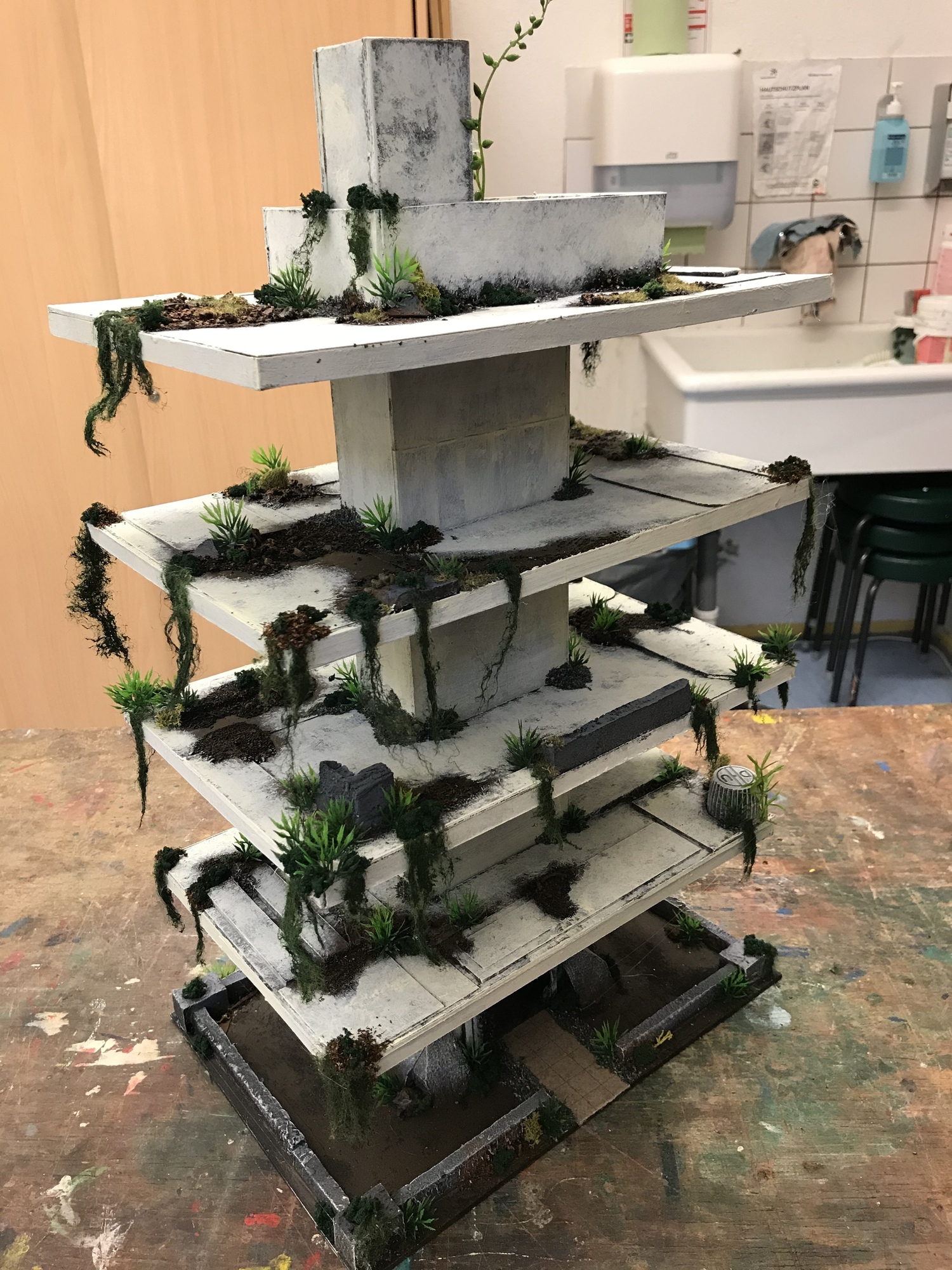 Uh, what is that fibrous stuff hanging off the edges in the last image?
I like those.
Plumber's hemp?

As the comp rules stand, entries must be started new. But I don't know if it's time the rules were discussed/revised after the current comp ends. 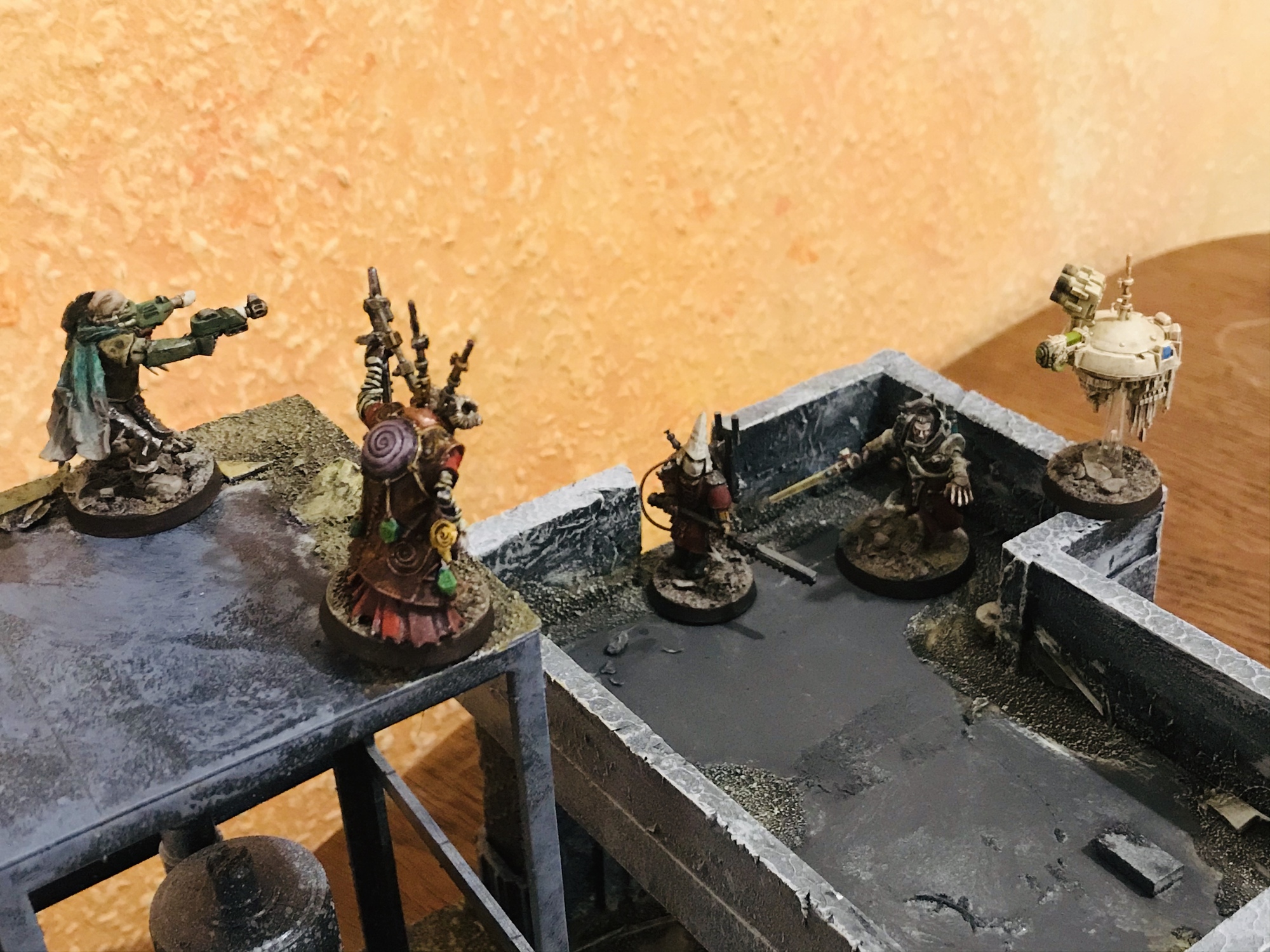 Isaak and Murkth get the drop on Gregorio, Inquisitor Tiktaalik and his weapon drone…
Reactions: Stoof, Ben_S and Mr. M

NoOneII. said:
Uh, what is that fibrous stuff hanging off the edges in the last image?
I like those.
Plumber's hemp?
Click to expand...

It’s wool that I dyed with poster paint. It’s the type of wool that you use to make felt for handicrafts.
Reactions: Mr. M and NoOneII.

This is the first scratch built thing I made after seeing the crazy stuff these Japanese guys post over on Twitter. I wanted to make a counts-as Valkyrie or thunder hawk for my warband, but I had no model for reference so it is way too big, about the size of a box for Timberland boots. This will probably be terrain of some sort for games, but right now it is hanging from my ceiling. 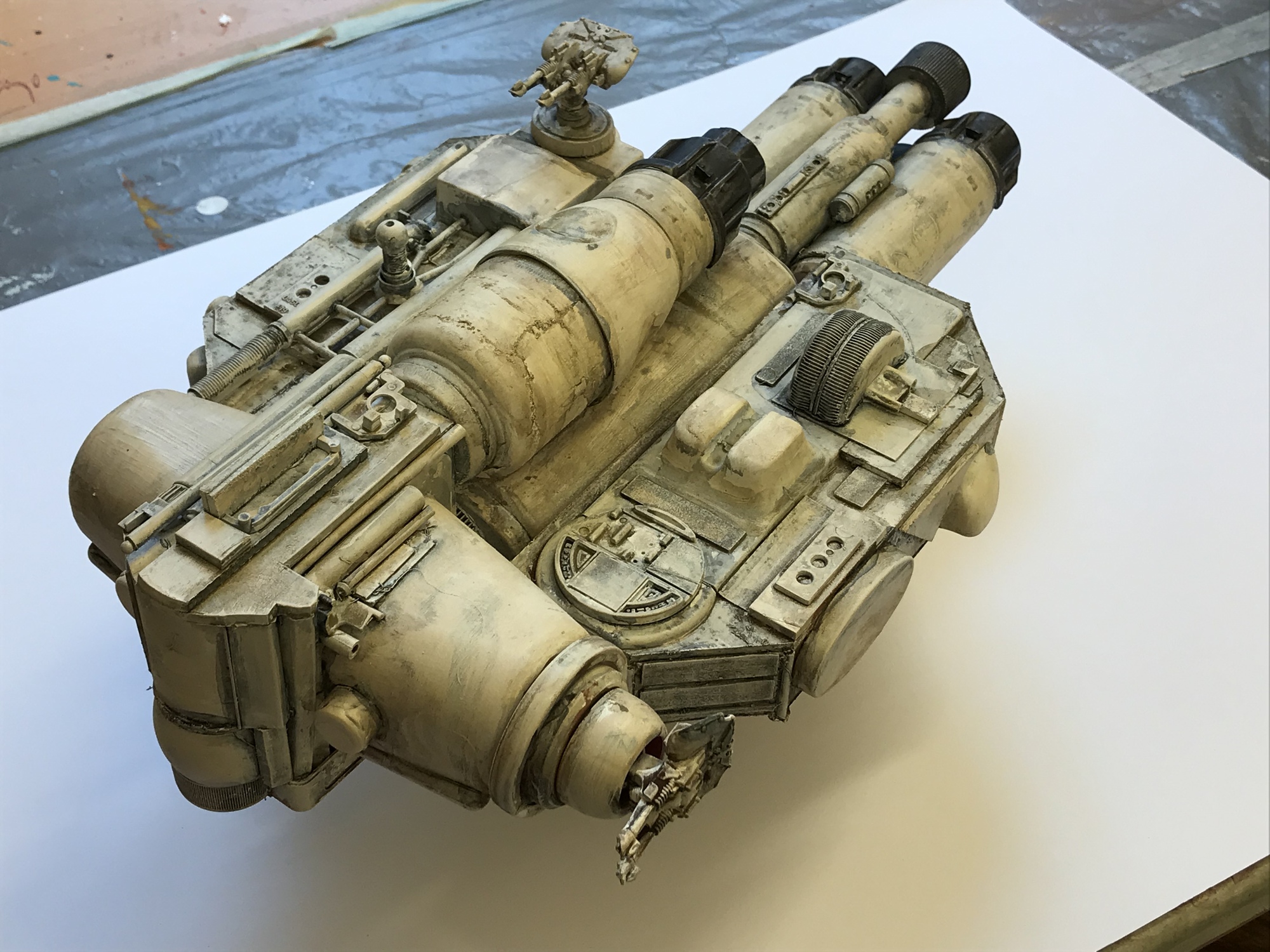 That's an awesome trash-bash ship! It really came together well!

Combat modified shuttle? I imagine it will make cool terrain, but it seems a shame not to use it as what you made it.

Thank you very much! I will buy a flying stem soon then.

I‘ve been into The Ossiarch Bone Reapers for a while now. They have a very sinister, evil look to them and make perfect villains. I’d like to use the one on the left for the Master Charlatan. Excuse the awful photos, does anyone have tips for a DIY photo box? 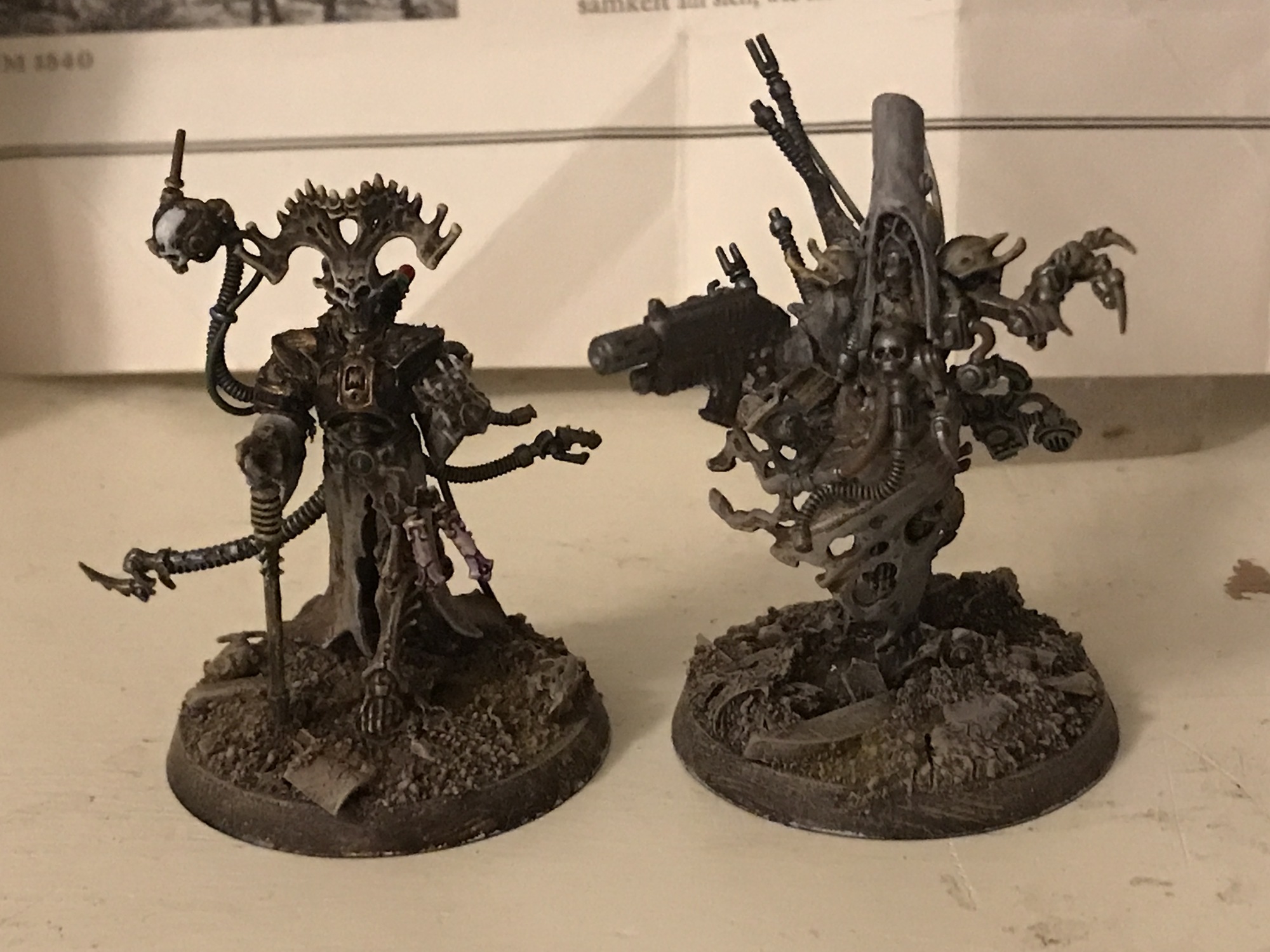 I just use a swing-arm desk lamp pointed at the ceiling for indirect lighting. I try to use something solid colored as a background…. Try to…

I built a little light box with a cardboard box lined with white paper and a small LED… Here’s the result. It’s an improvement at least. My new gang is Corpse Grinders. The kit is really versatile so I may pick up another one next year at some point to make other henchmen of some sort. The only thing I don’t like are some of the heads. Almost all of them actually xD 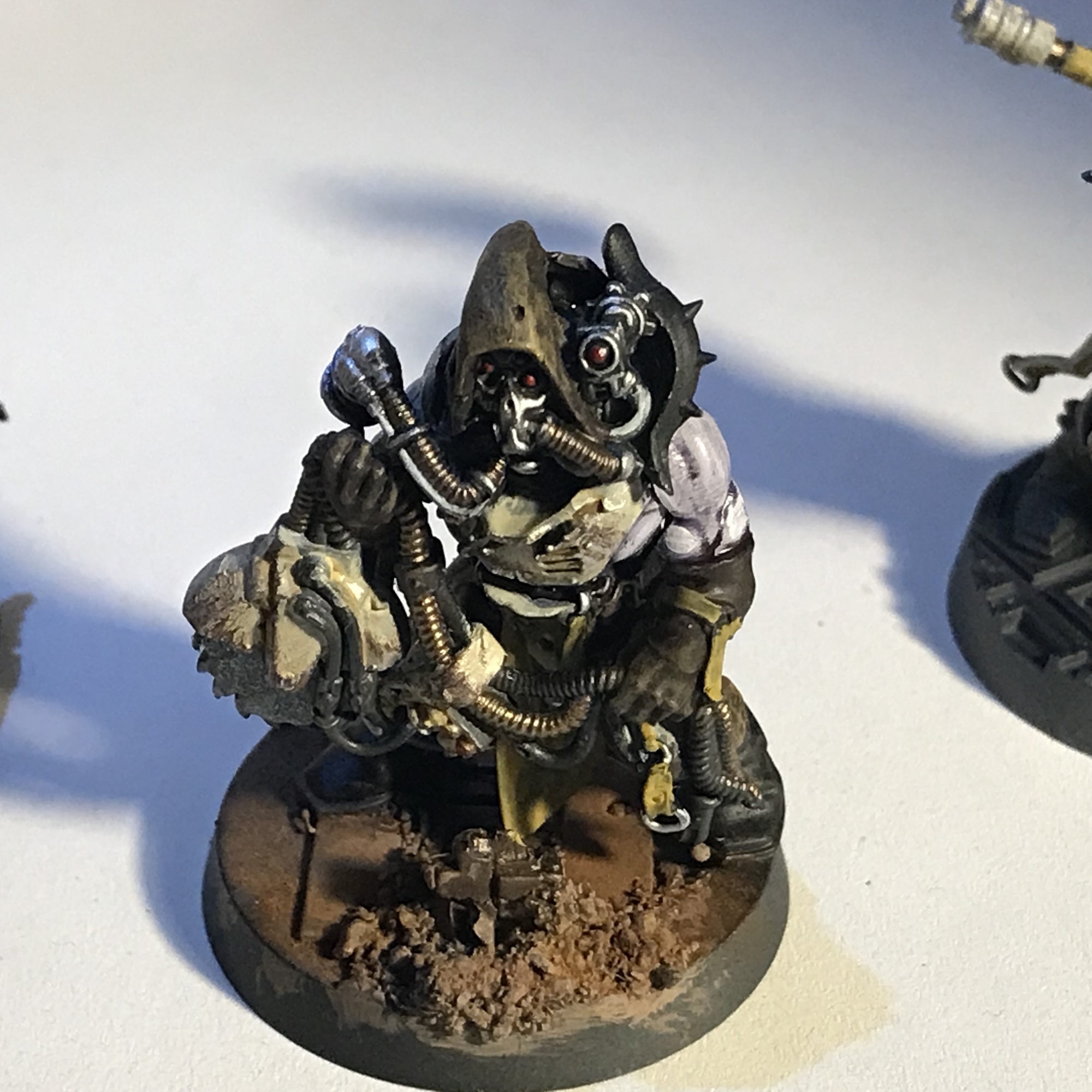 In the original Inquisitor book there were descriptions of assassins and imperial death cultists being fitted with devices to help them grind and devour their victims. I was inspired by these passages because they show how mankind is teetering on the brink of damnation, even among the elite specialists employed by the inquisition…
Reactions: cainex1, Ben_S, Pagumb and 1 other person

I’ll be posting some Necromunda terrain this week. I’m happy to report that I have some great stuff coming down the pipe. Scatter terrain, buildings and maybe another spaceship… 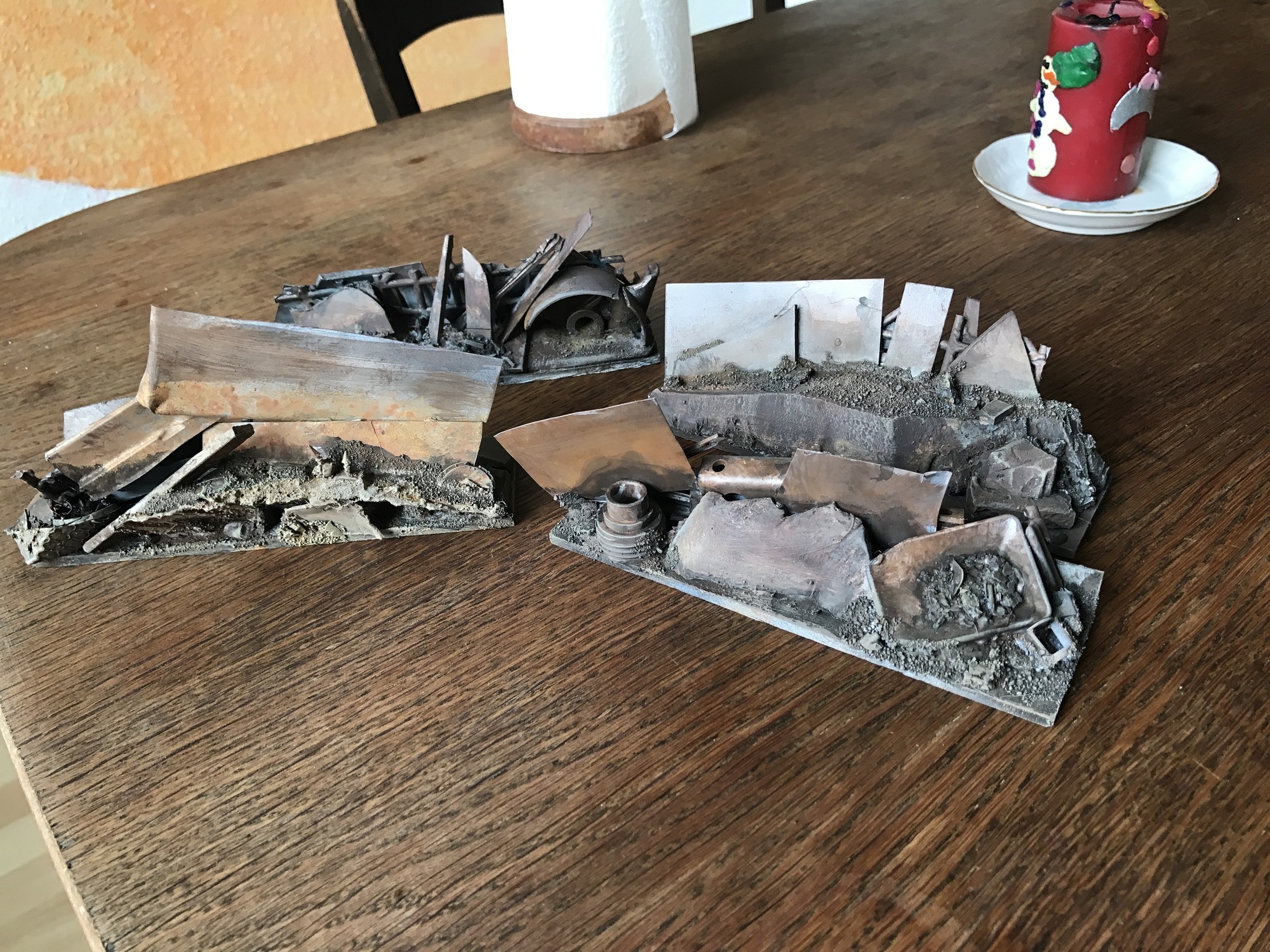 I can whip these barricades up really fast. Basically it’s just a chunk of XPS on a bit of wood. Then it’s just off cuts of plastic card, bits, more bits, plastic wast, popsicle sticks and sand. The only problem is that there are a lot of voids where it’s tough to paint over the white primer.
my Newer stuff uses the zenithal method which makes more sense for Necromunda I think. 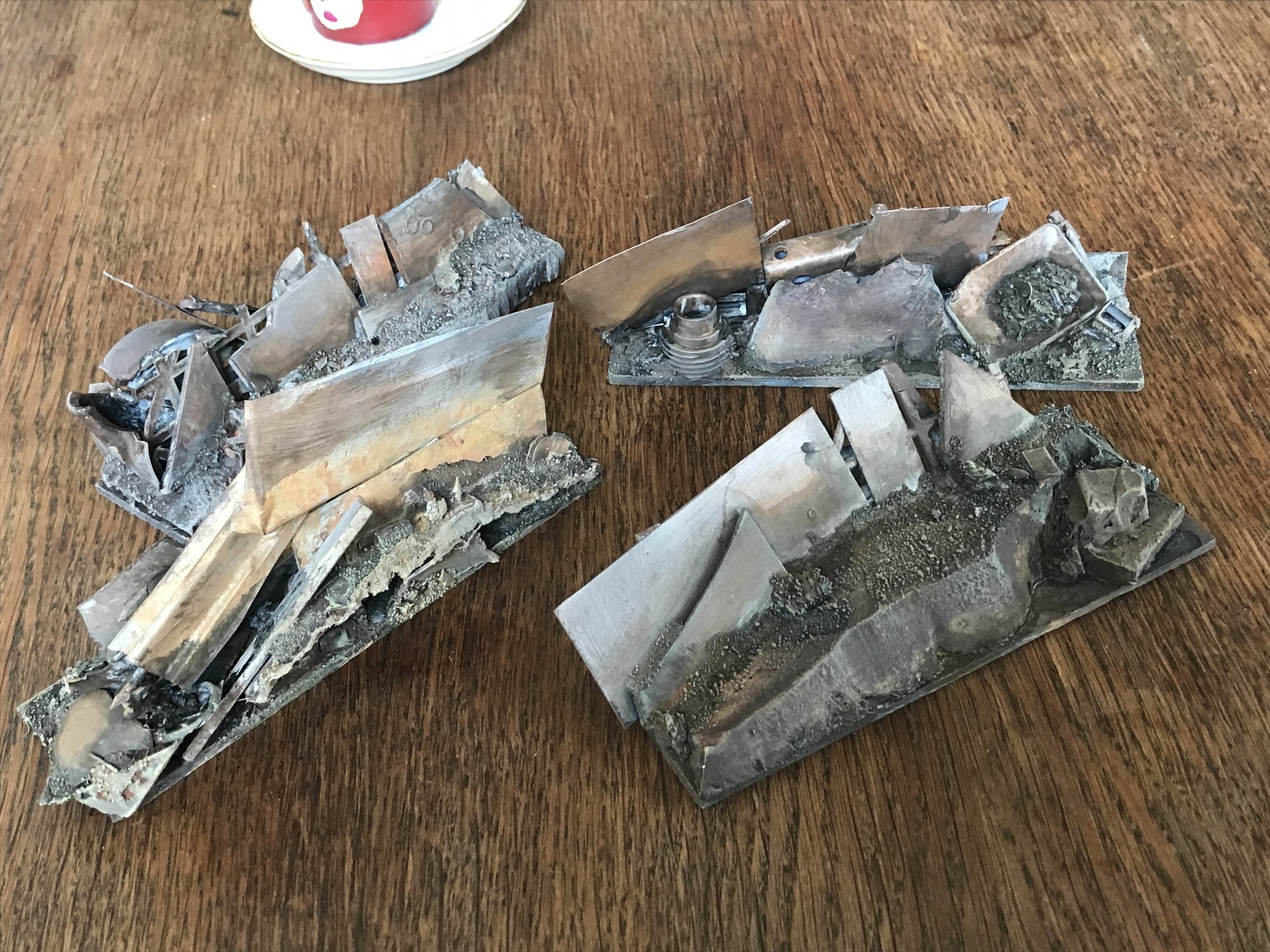 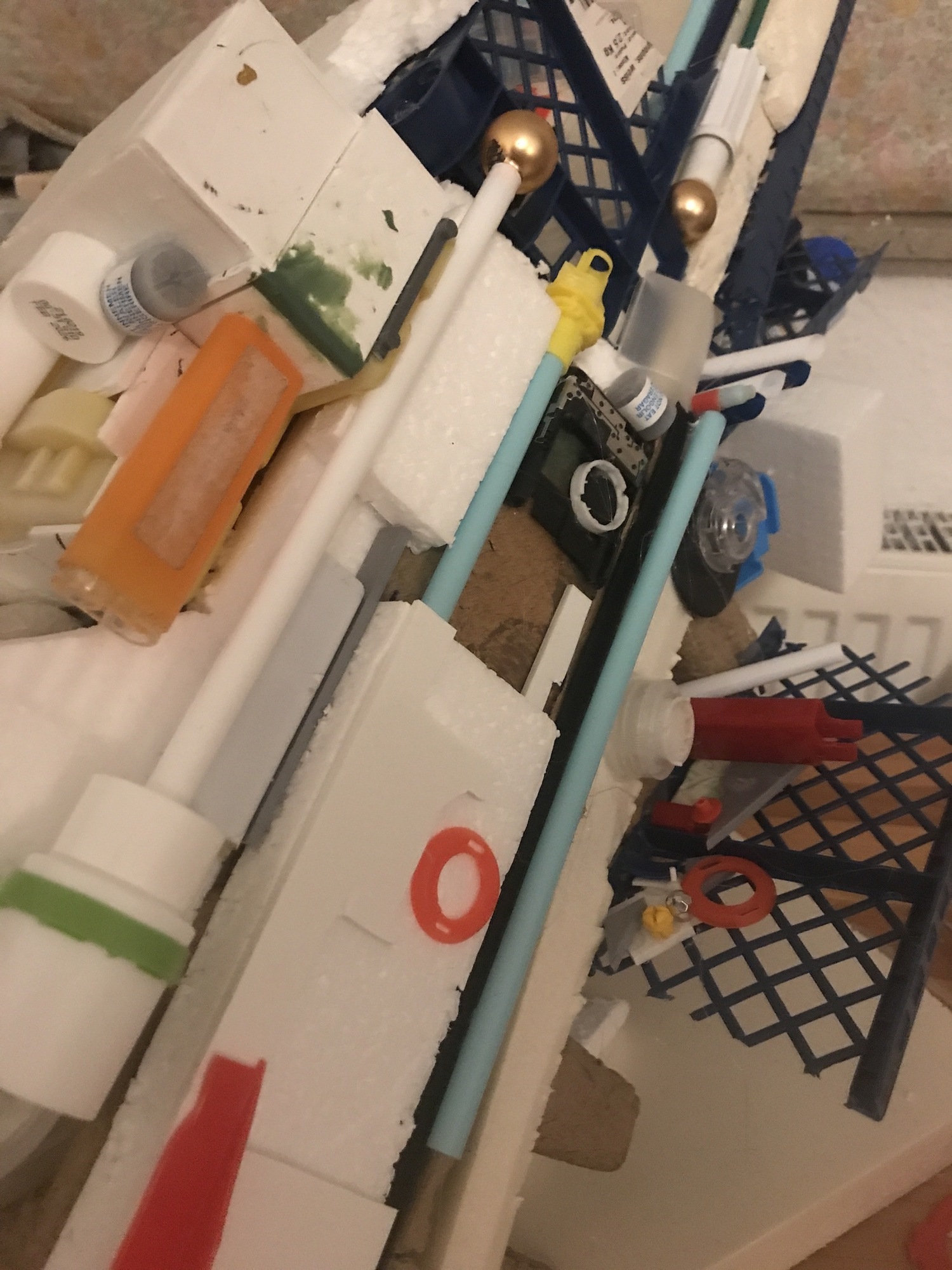 What really helps is to put some Paint into the White Glue. Makes the process much easier later on.
Reactions: Kitcar

I was going to reply to this thread, but I realized I don't have anything finished. Ever.

@NoOneII. : That is really brilliant, thank you! I’ll be making black glue now

i have started Threads on other sites where I show WIPs. For some people it helps keep them motivated, I could never follow through. I am finding it easier to post things as I finish them. 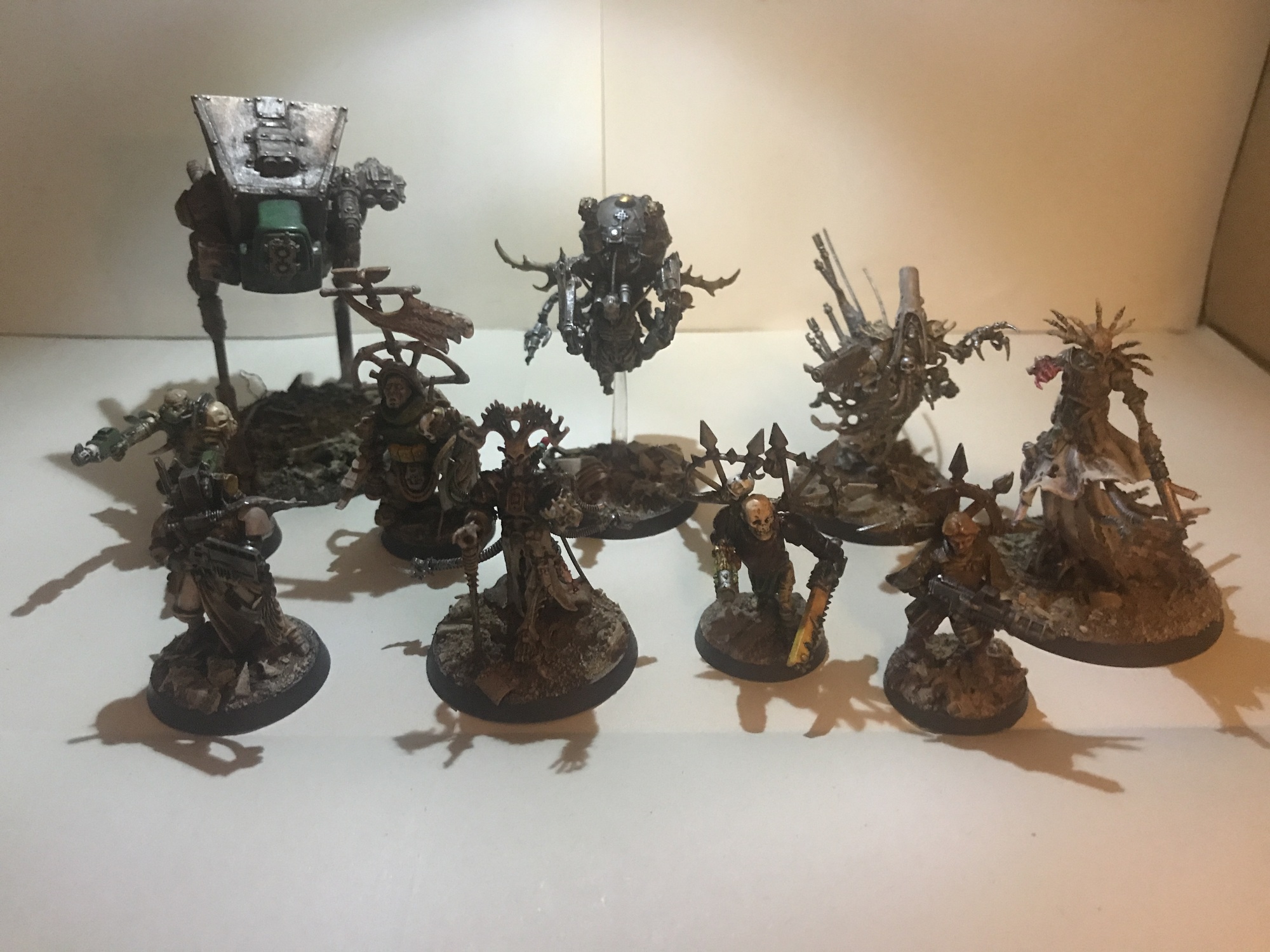 more heretical guys
Reactions: BearsWillEatYou, Tiny, Biggle_Bear and 5 others
Show hidden low quality content
You must log in or register to reply here.