For the record, I'd be interested in seeing work in progress pictures - either during progress or once you've finished - but post what suits you. I'm happy to wait to see stuff like this. 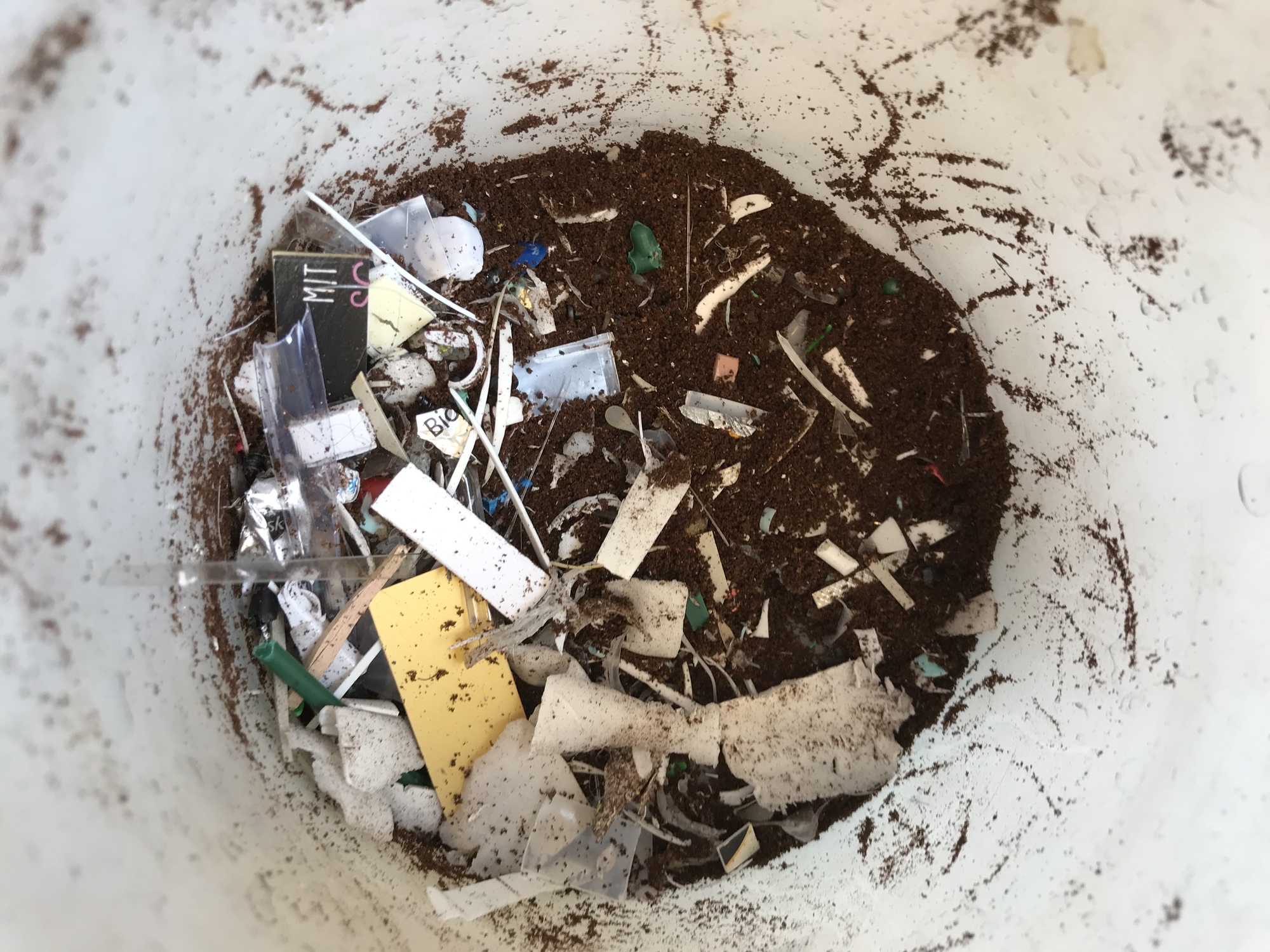 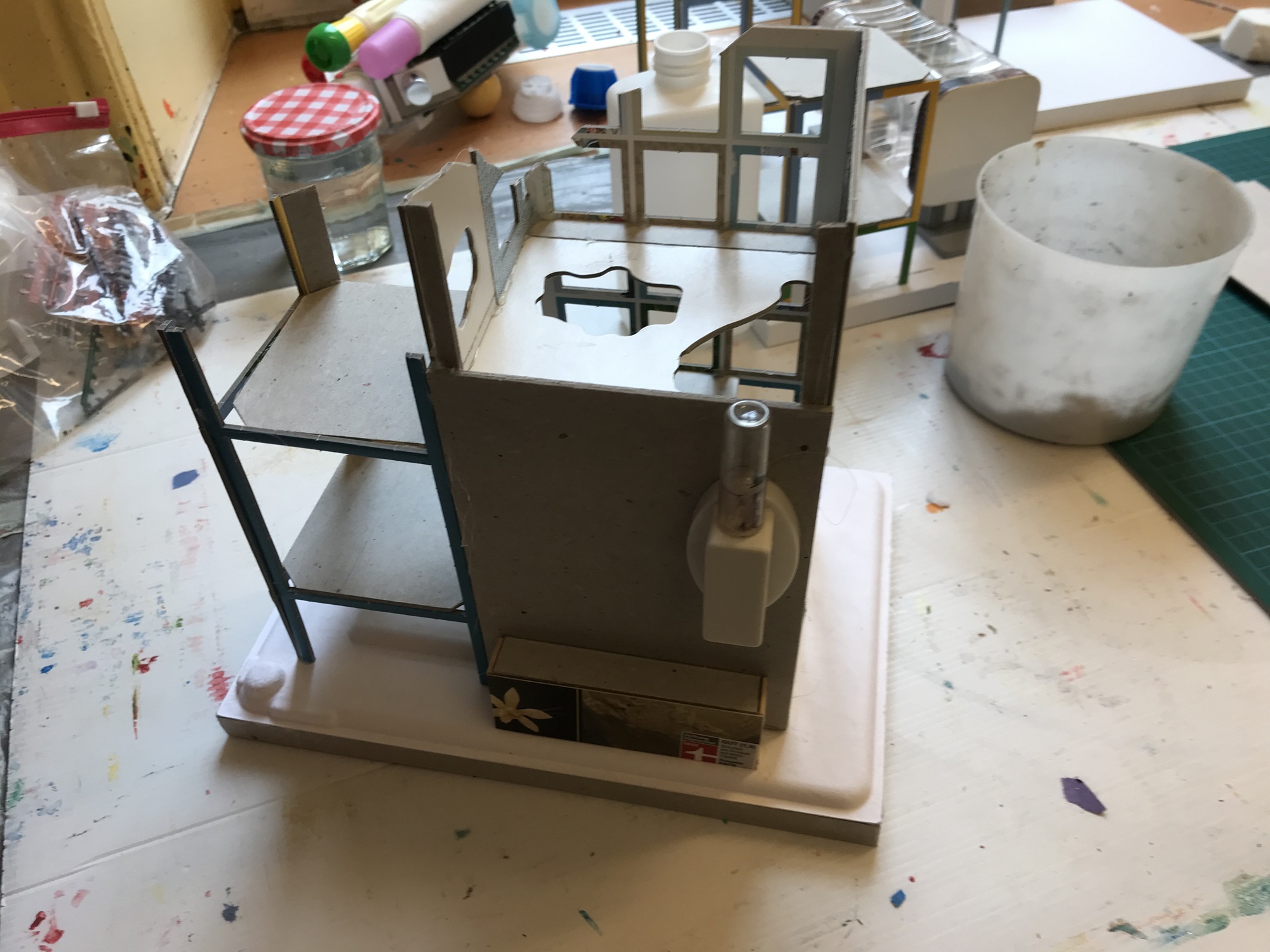 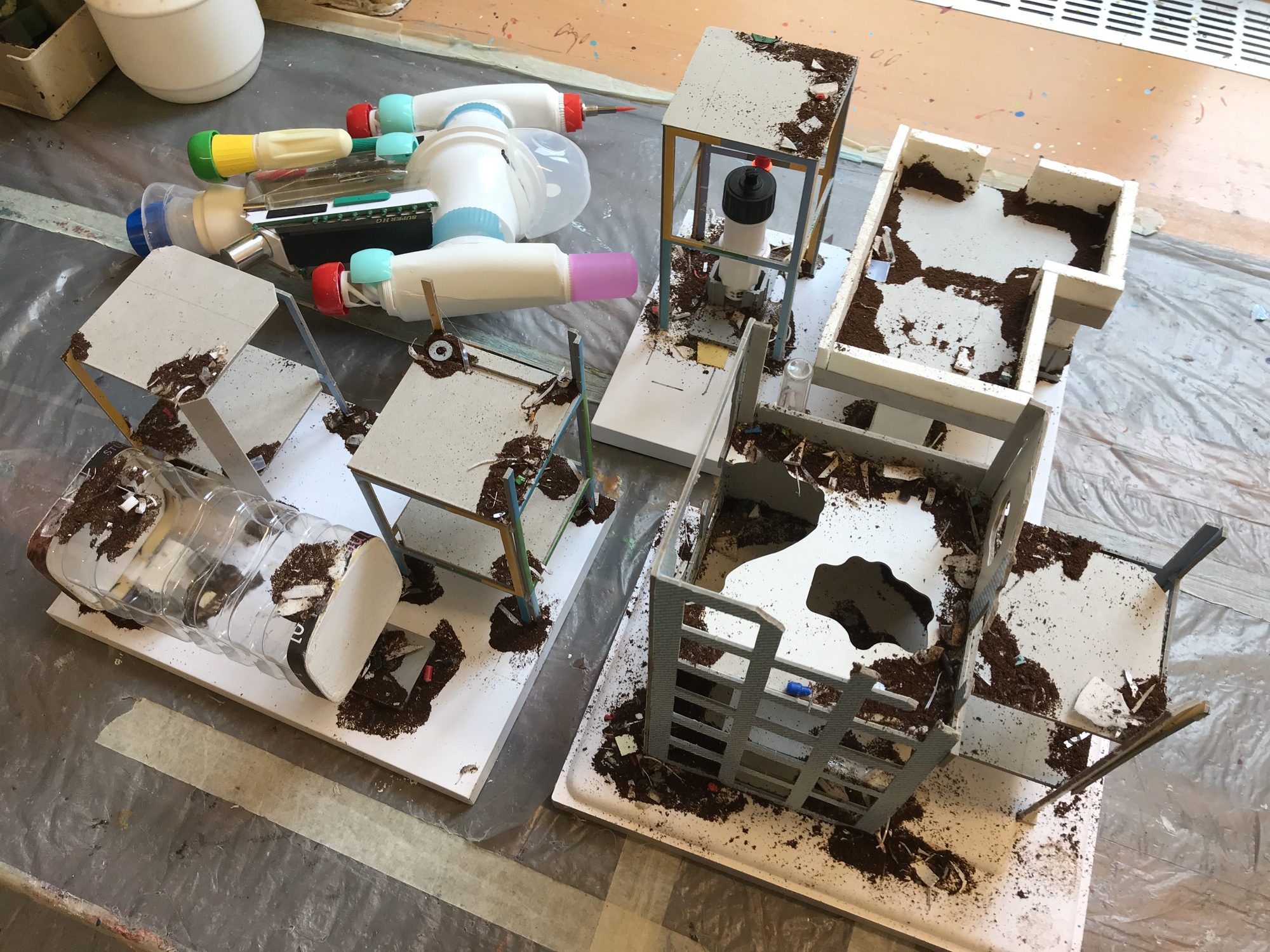 Coffee, chopped up Bitz of plastic glued to the scenery. 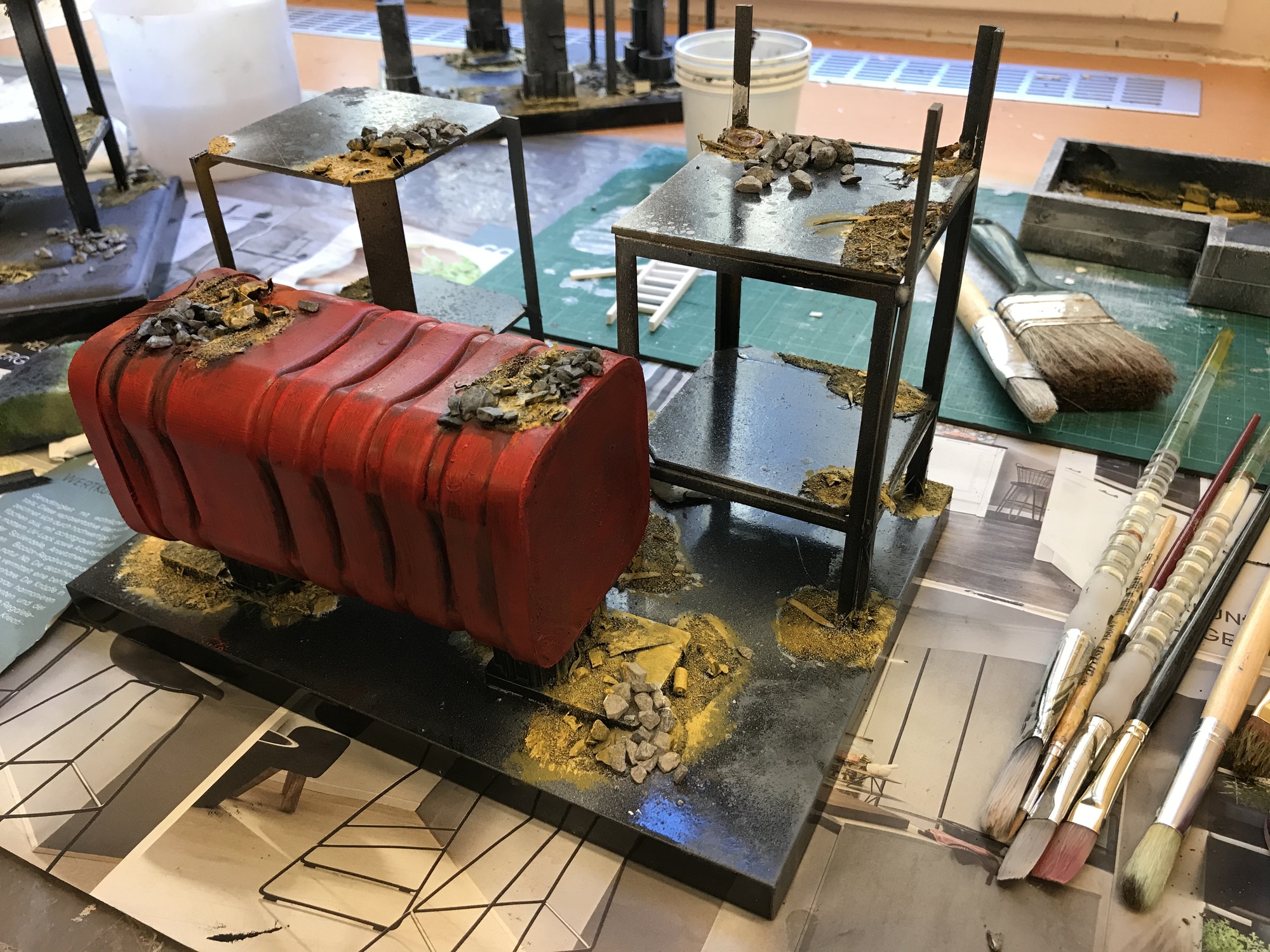 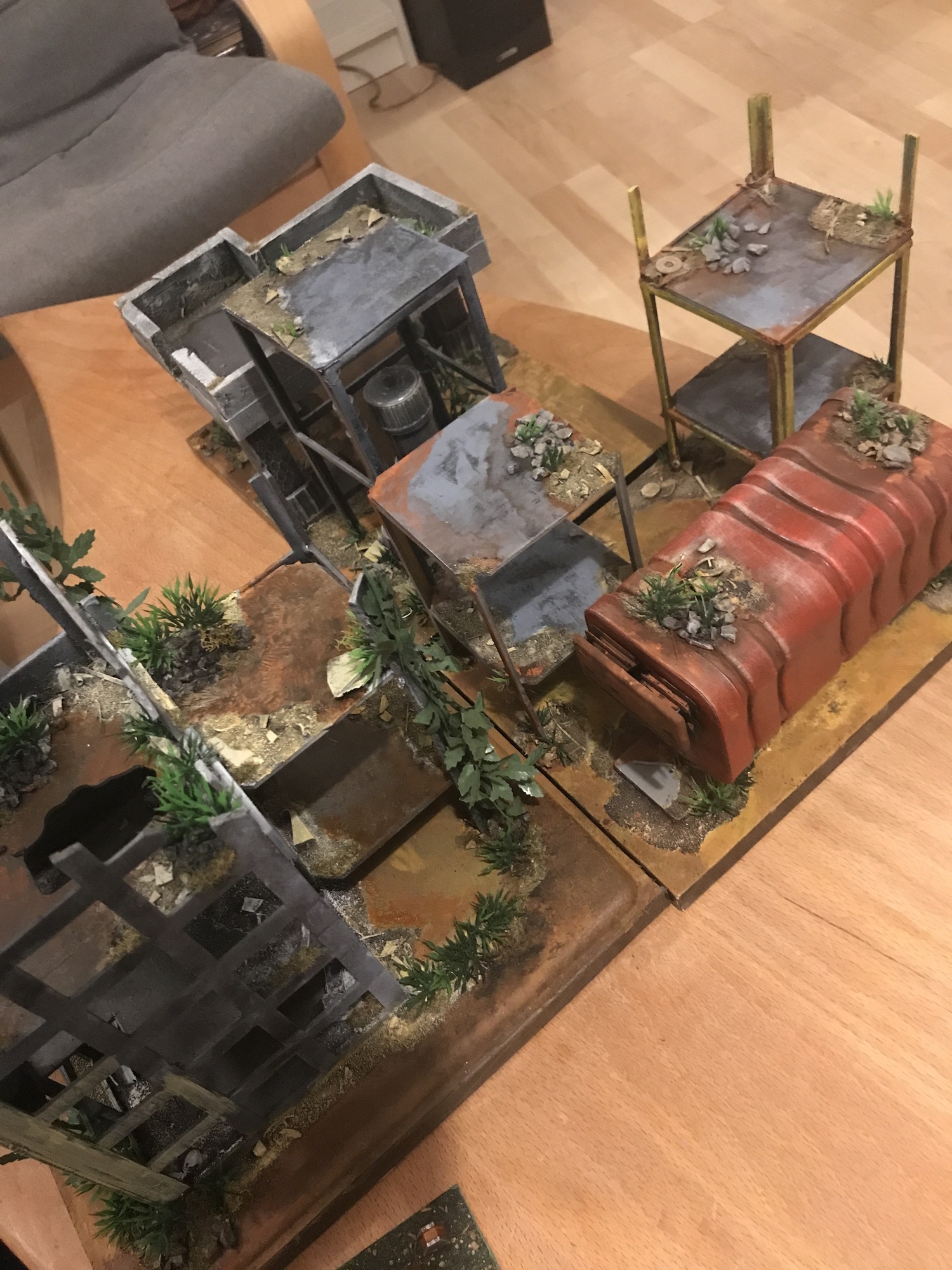 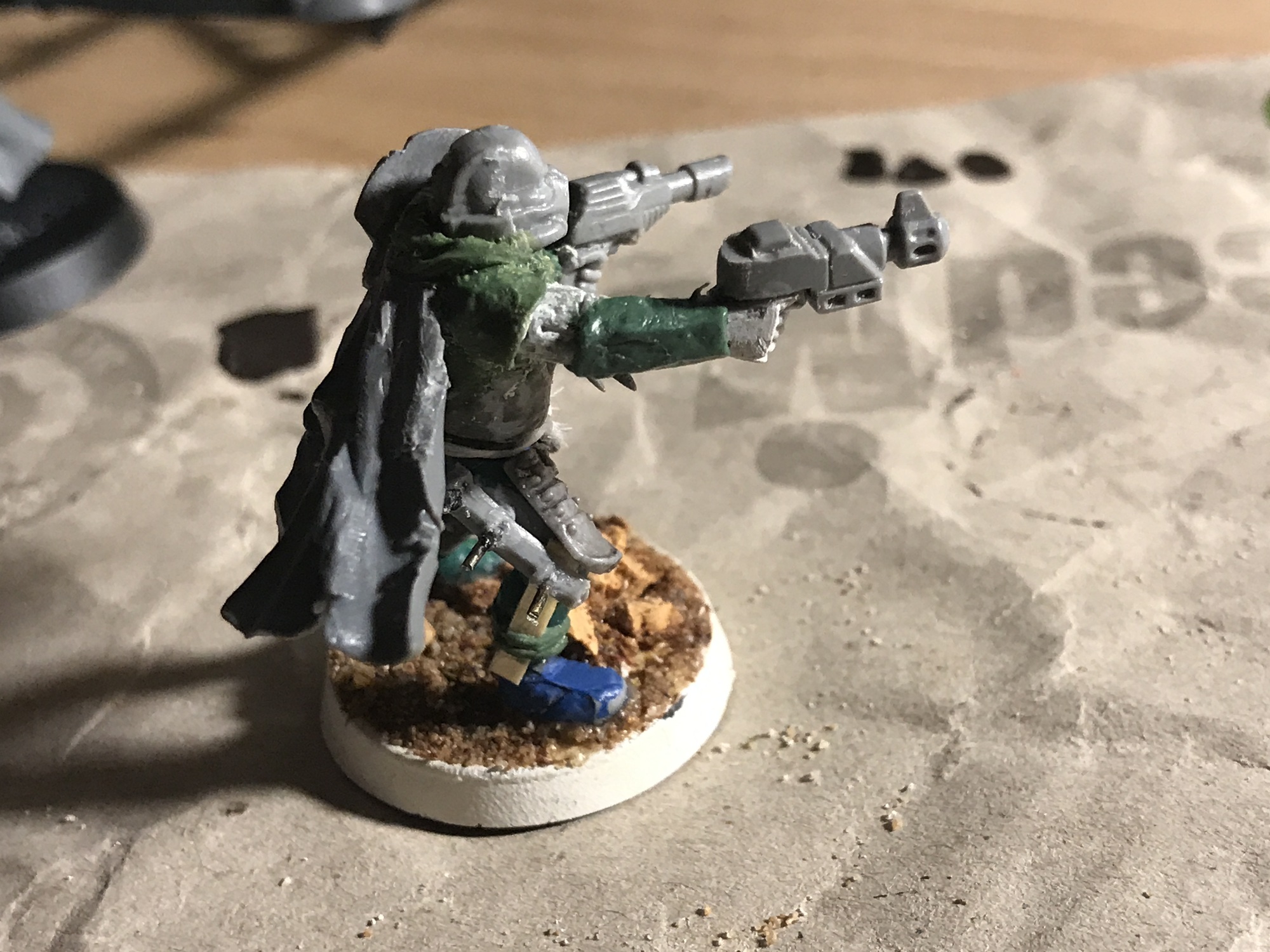 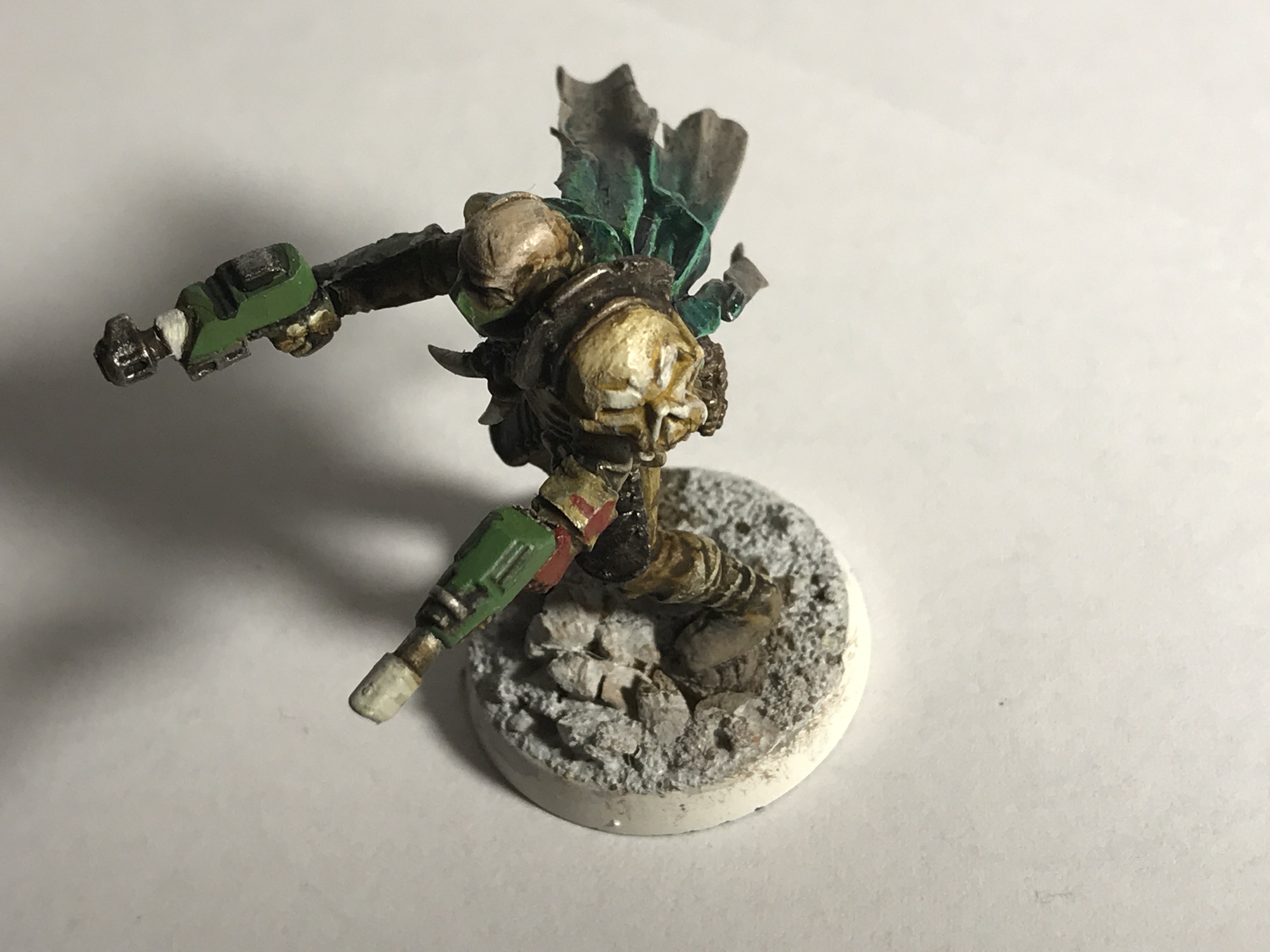 Thanks. It's always interesting seeing how things were done.
Reactions: Mr. M

Nice terrain pieces. For general wargaming, or your version of a more greenish underhive? I kinda imagine there to be plant life throughout the hive, but maybe more fungus, moss, mold, that sort of thing.
Reactions: Mr. M and Punktaku

originally I wanted to do an Inq28 thing on a sort of lost imperial settlement…
Reactions: Mr. M and MedMos

Alright folks I’ve finished the first pain phase of my wrecked spacecraft. I posted the WIP shot before it was primed. I tri something different this time; I used this granite look spray paint from the hardware store and I really like it despite it being expensive. It doesn’t melt styrofoam and gives a pretty dusty, crusty appearance and texture. 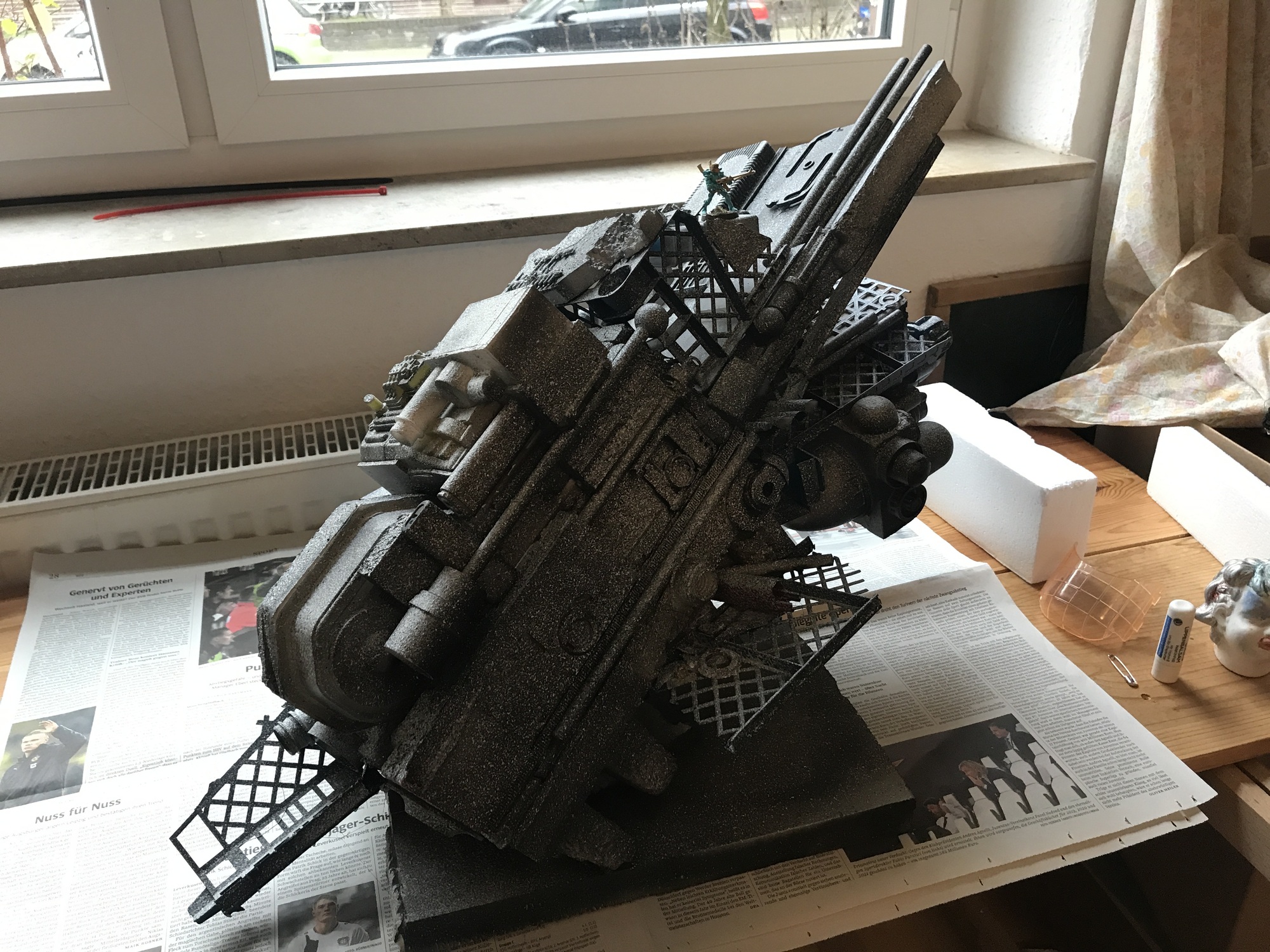 The guardian on top of the ship was hard to find in the picture after I took it, so I am looking forward to there being a skirmish on top of it!Because this thing is huge! I might add some details and drybrush a few metal areas, but the ship is table ready as it is. 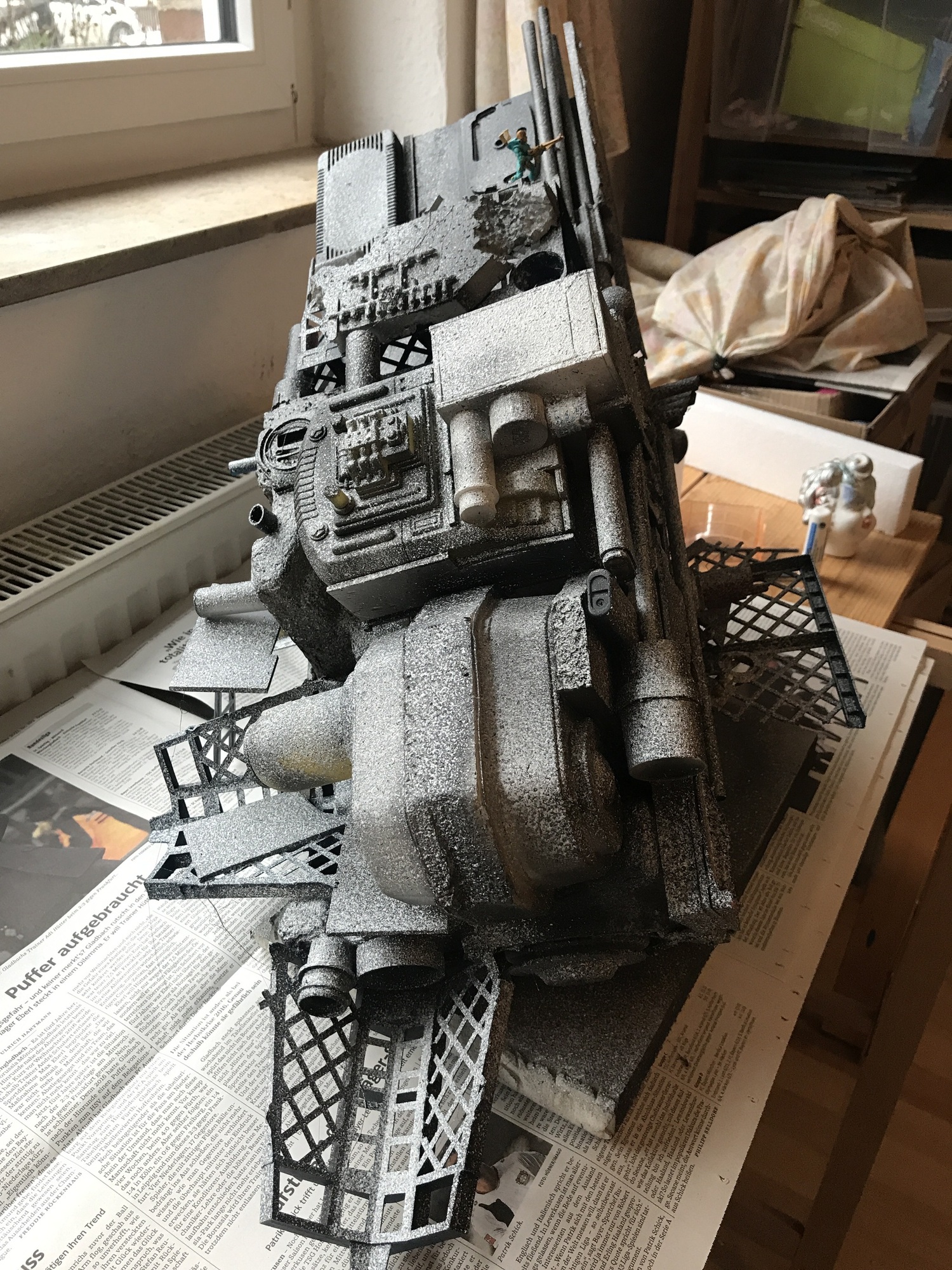 The model represents a ship that has crashed landed into a hive city, causing major damage and altering the daily operations in the surrounding areas. The authorities have taken pains to hide the ship, especially the reason it crashed and the nature of its cargo.

Our GM has plans for a psychic creature of some type that we will have to battle, which is a good idea imo. I would also like to involve this terrain piece in some way, having it move around and gain abilities as more and more gangers are injured or taken out of action.

Let me know if you have any suggestions or expertise in writing rules or scenarios for Necromunda. My strength has always been more about the conversions and writing the stories for them. thanks for looking
Reactions: cainex1, Biggle_Bear, Ben_S and 3 others
M

That would make an awesome centerpiece to build a collapsed dome around! Nice work!

As the Tyranids battle Vin Diesel during an eclipse.
Reactions: Mr. M

Hey you all I am swamped with work, illness, family and baby jesus so I’ve not been doing much warhammerin‘ as of late. Here are a couple of pictures to tide you over until next year… 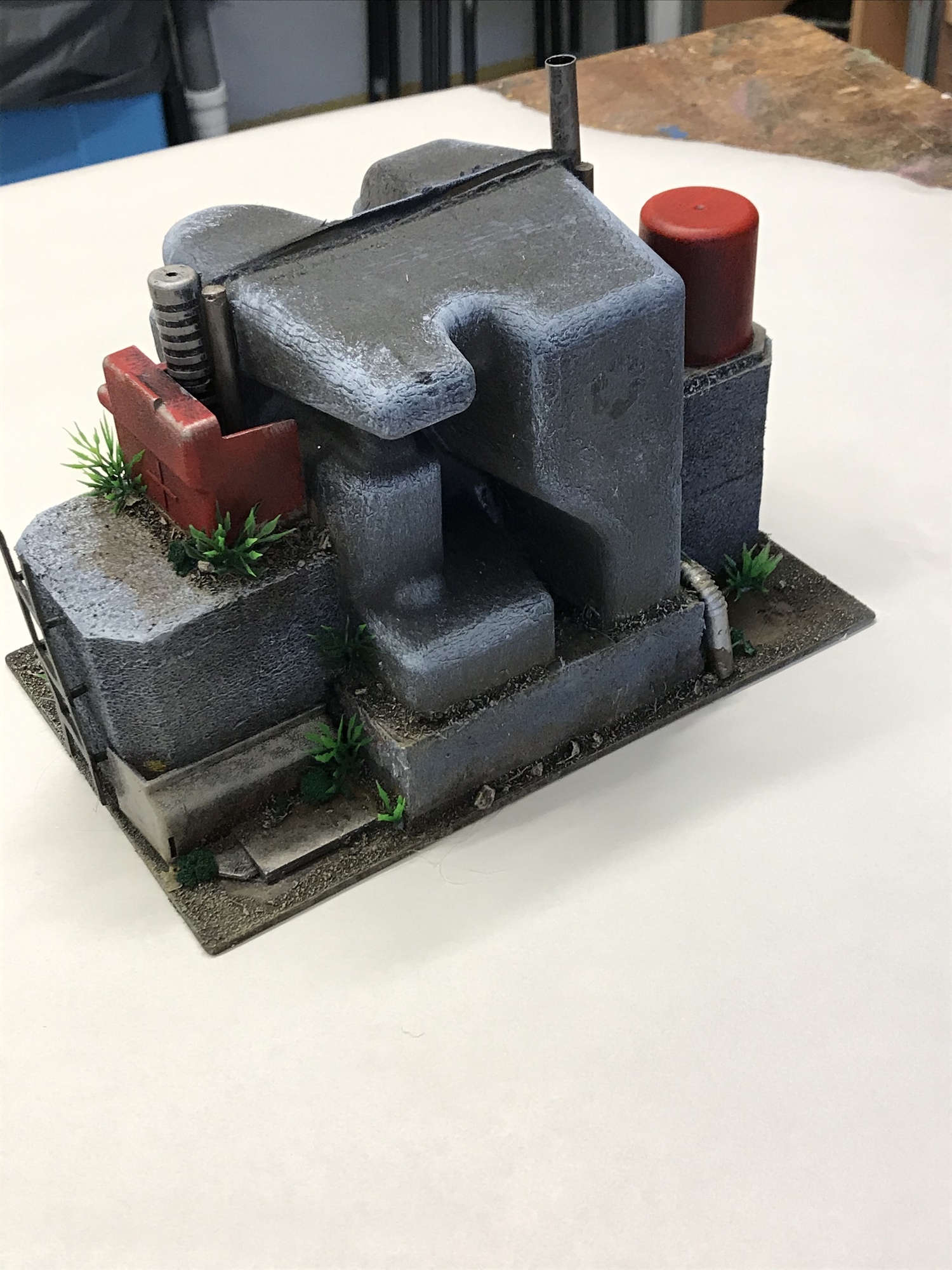 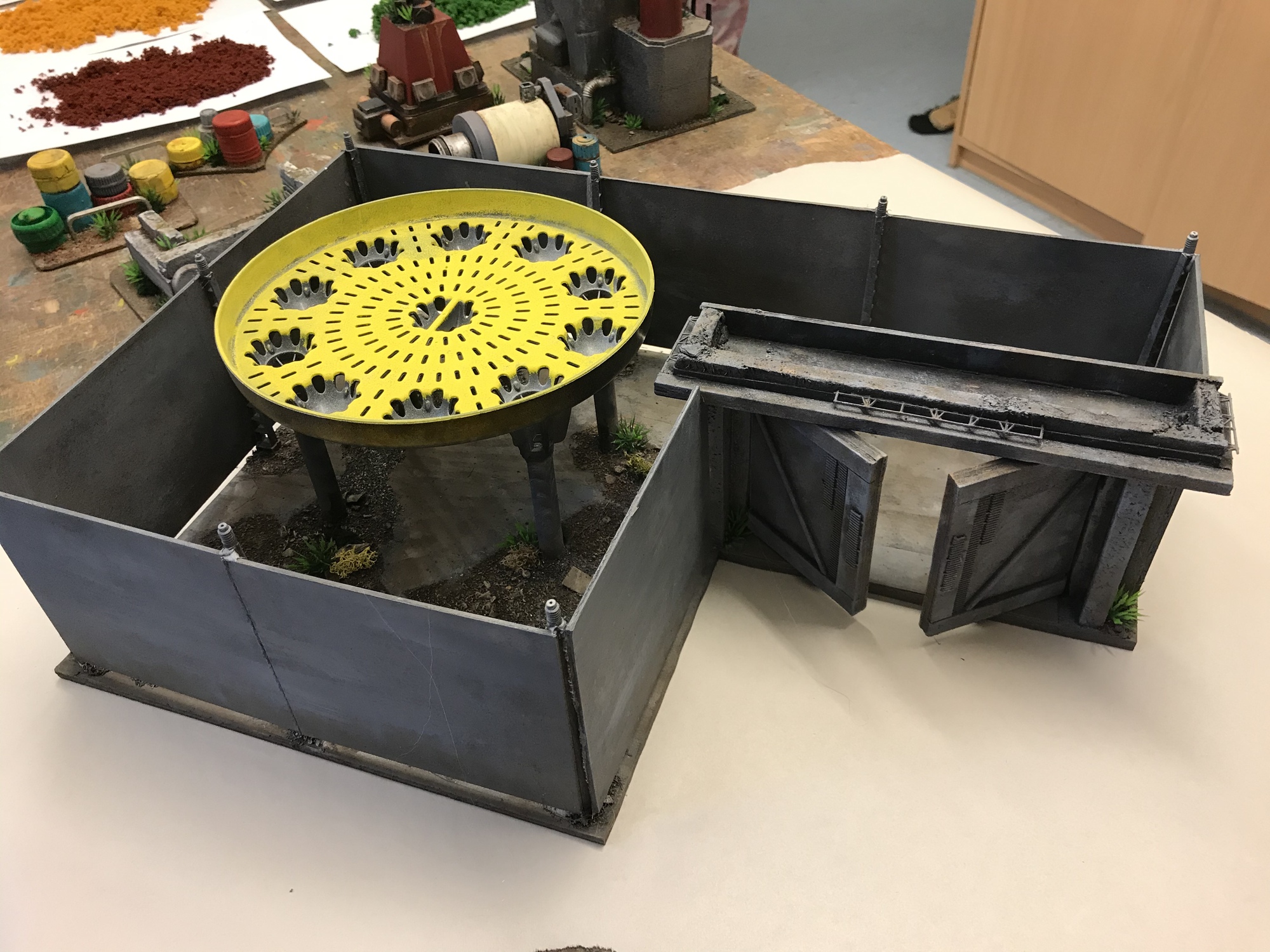 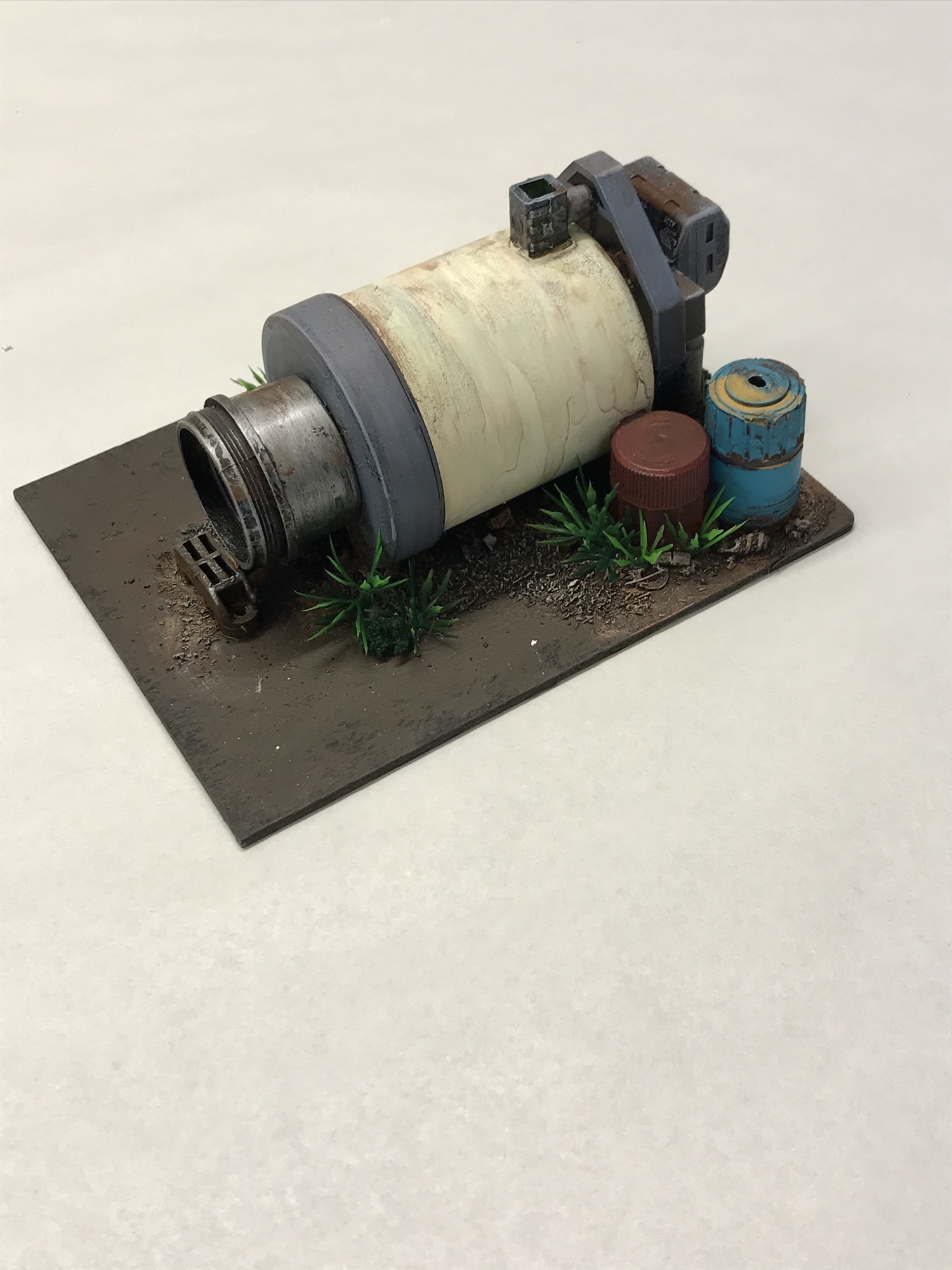 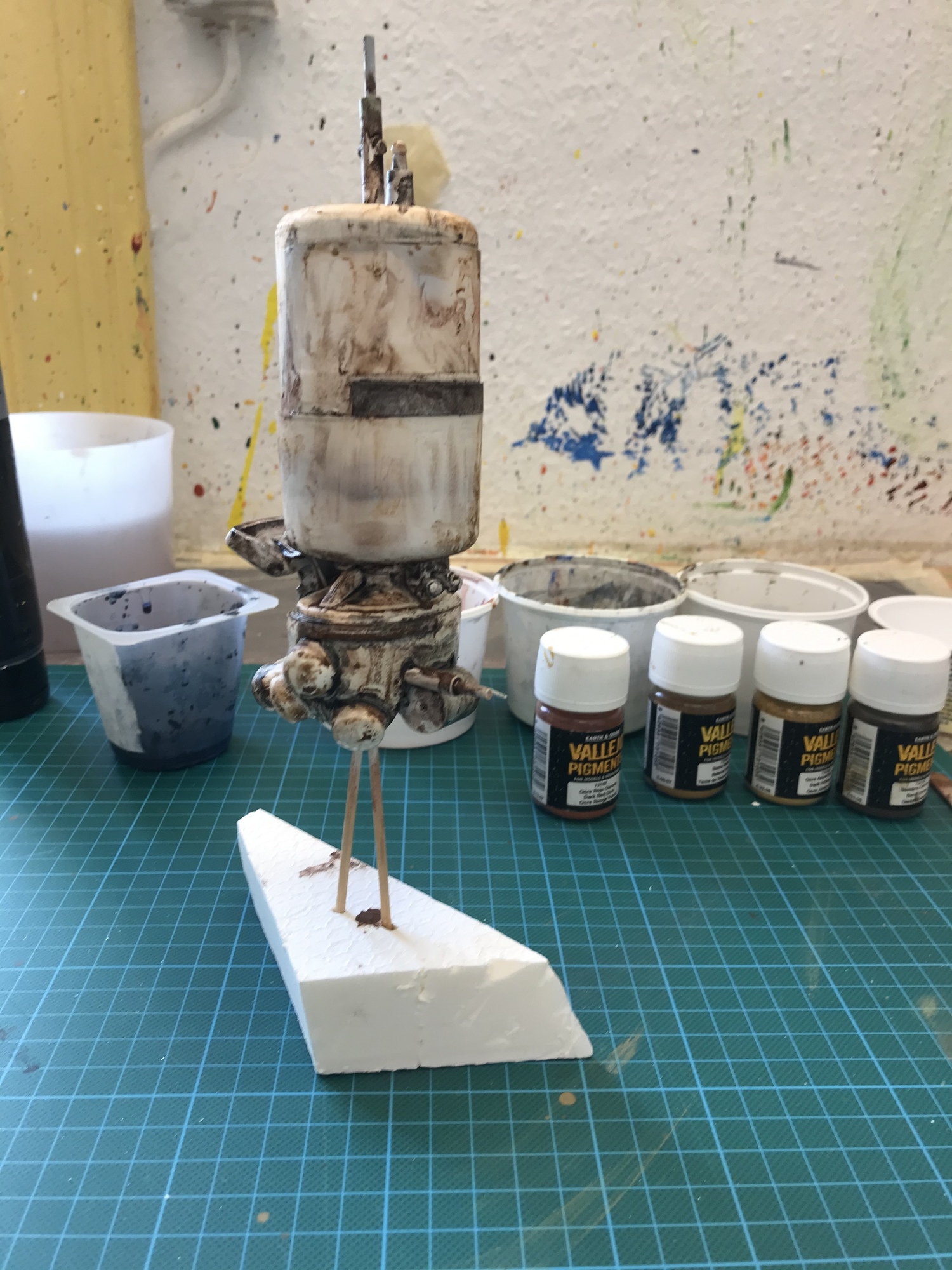 Those are some excellent trash-to-terrain pieces! I especially like the walled compound - that came out really well!

What was the origin of the yellow thing in the walled compound?

Punktaku said:
What was the origin of the yellow thing in the walled compound?
Click to expand...

It was a plastic accessory from a crockpot that use to steam vegetables.

thanks for the lovely comments 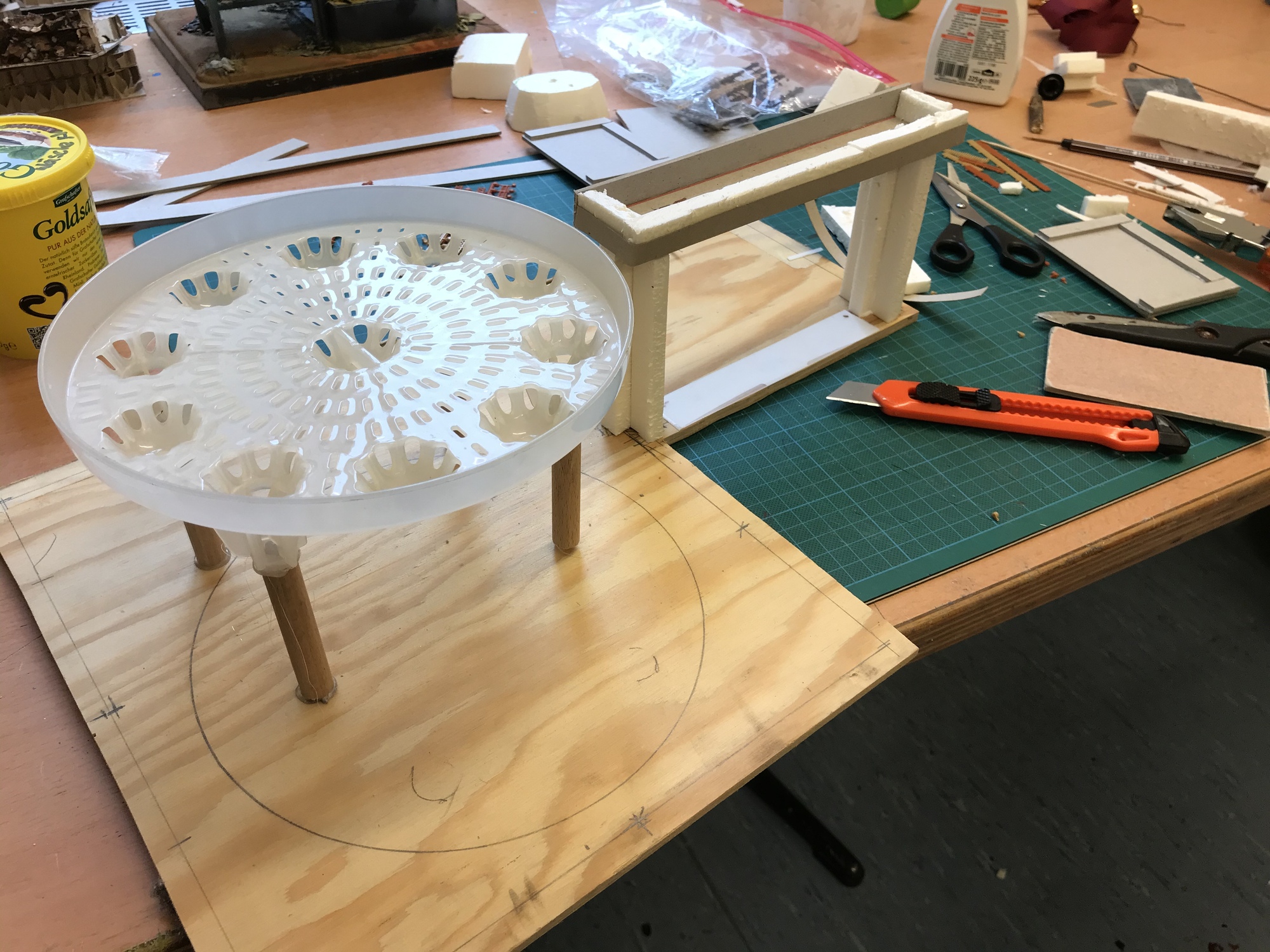 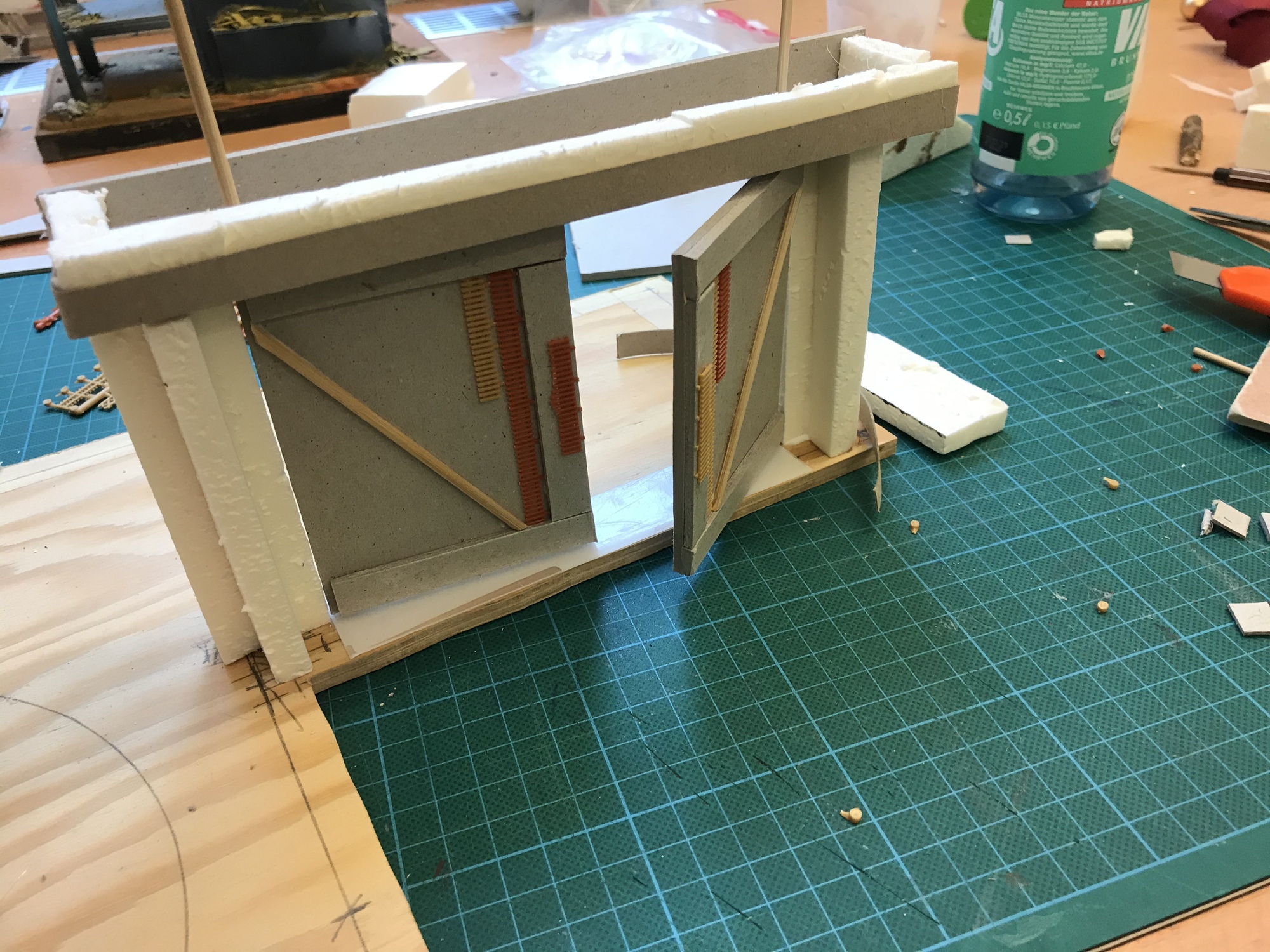 Merry Christmas to all, and to all a good night 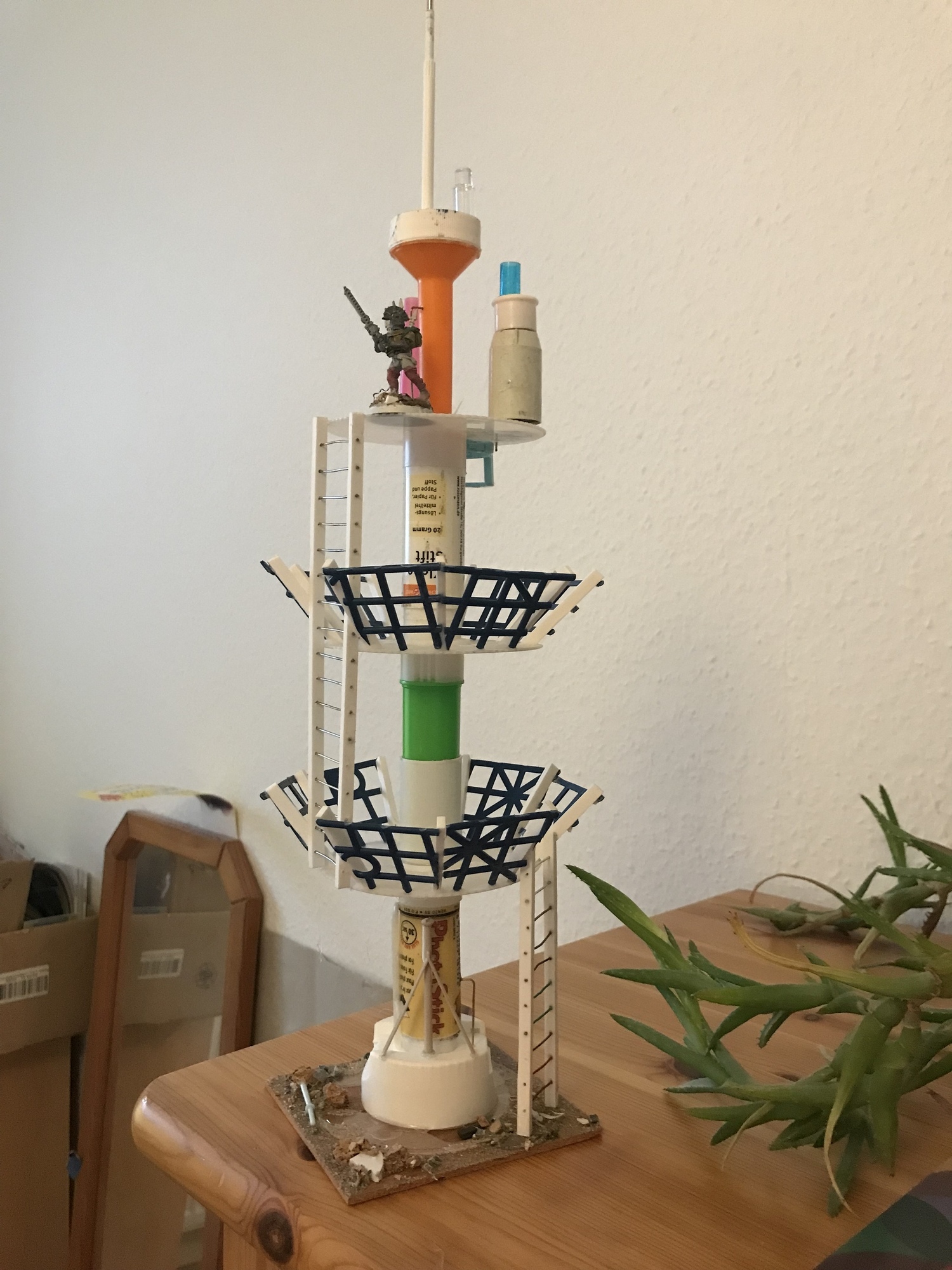 Got a new WIP coming in hot… I’ve been hoarding supplies and now the Styrofoam Thunder Dome is taking shape. 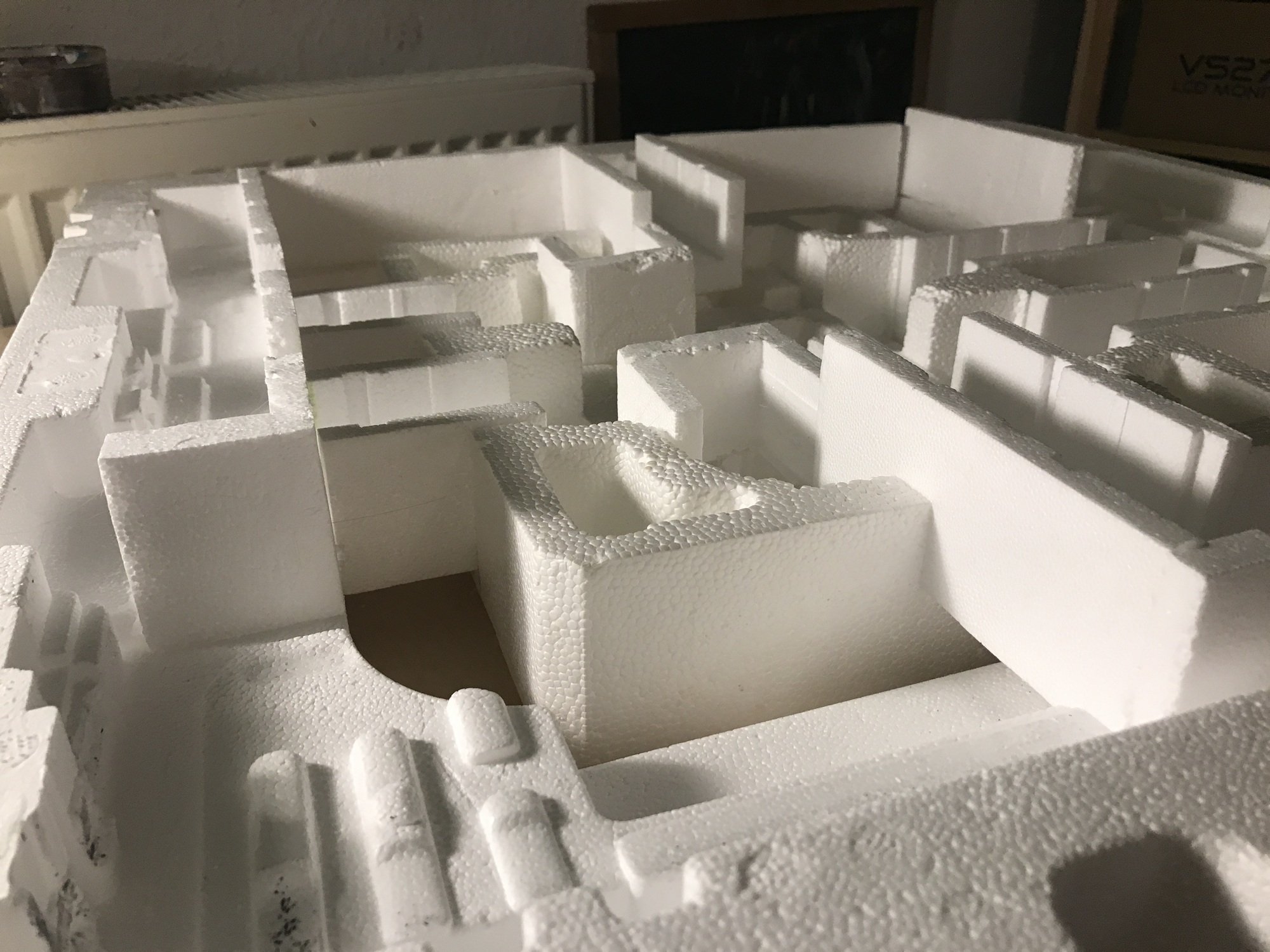 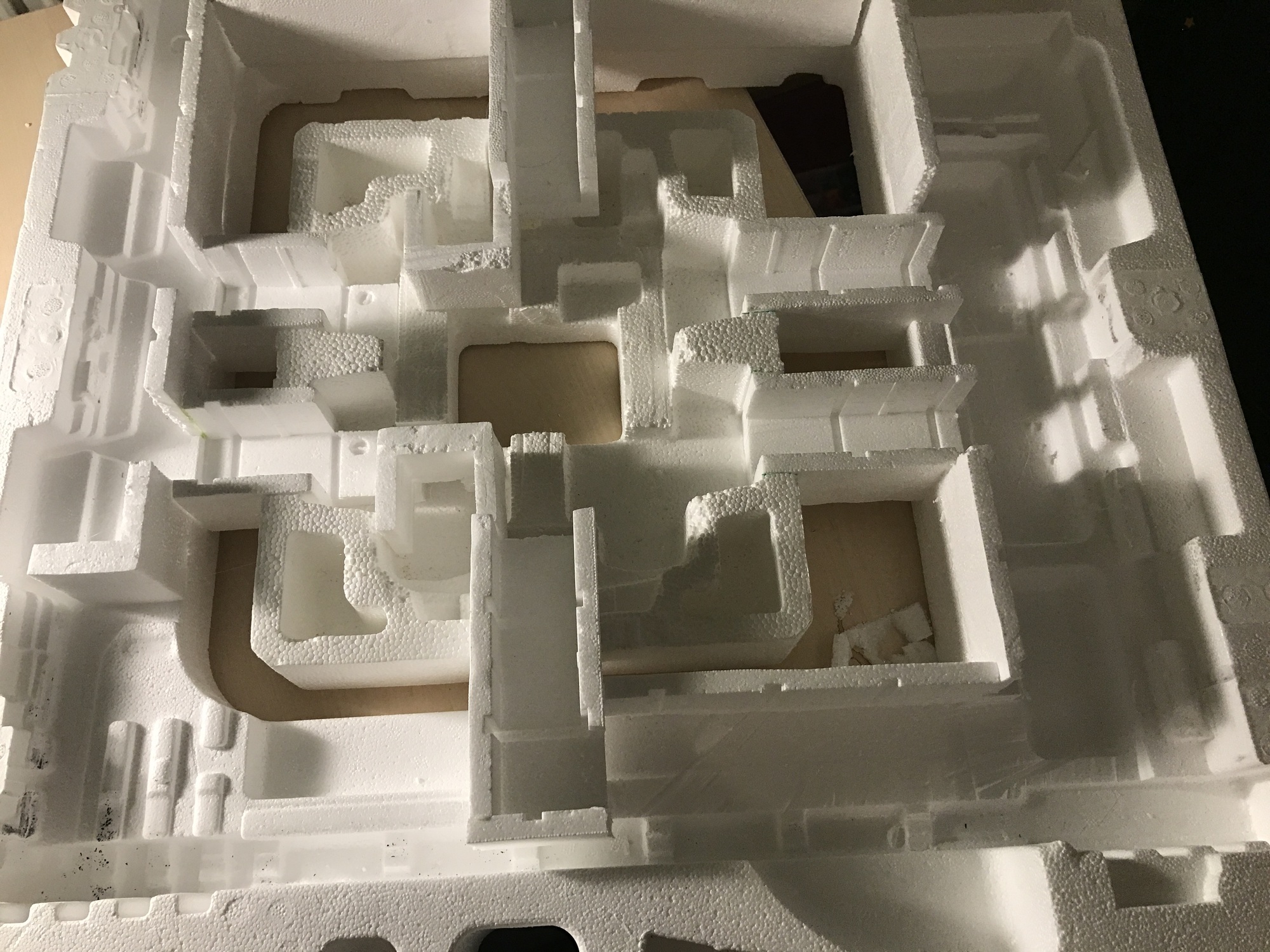 This one is going to be a smoothie. That means there won’t be any paint or details besides a bit of filler for weird gaps or awkward spots. I don’t want to spend too much time on this thing in case it cracks in half in transport or during a game. My goal is to create a uniform look, like the inside of a spaceship or one section of one factory Building.
Reactions: Greenthumb, Biggle_Bear, CaptainDangerous and 6 others

Very cool idea. I believe it’ll look even better with 3 colors: outer walls, inner walls, floors. Is that one big piece of styrofoam? Like the bottom of a fridge box or other appliance?

Thanks guys. It’s two styrofoam pieces placed one inside of the other. I found them on the street so it could be any sort of electronic stuff. the outside edges are a bit more than two feet long. The corridors are what really sets it off. They are edge protectors from a wooden door that this carpenter was installing in my apartment building. It’s as if they were made to construct terrain with.
Reactions: Punktaku

I used up all of the styrofoam stuff that I had so I’m calling this build finished. It’s was a lot of fun, in hindsight I would have made it more symmetrical without the vertical piece jutting up on one side. i may change that. 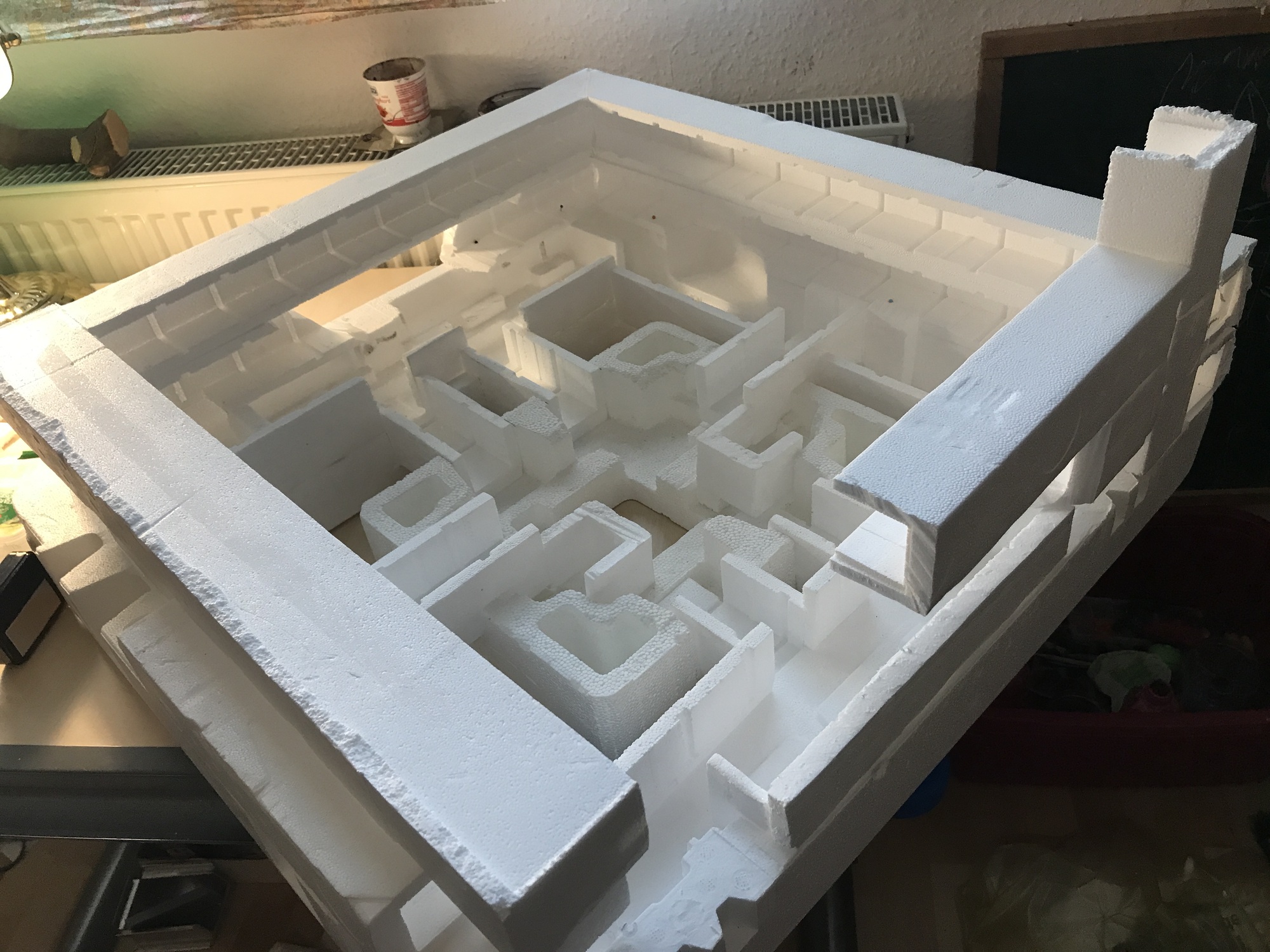 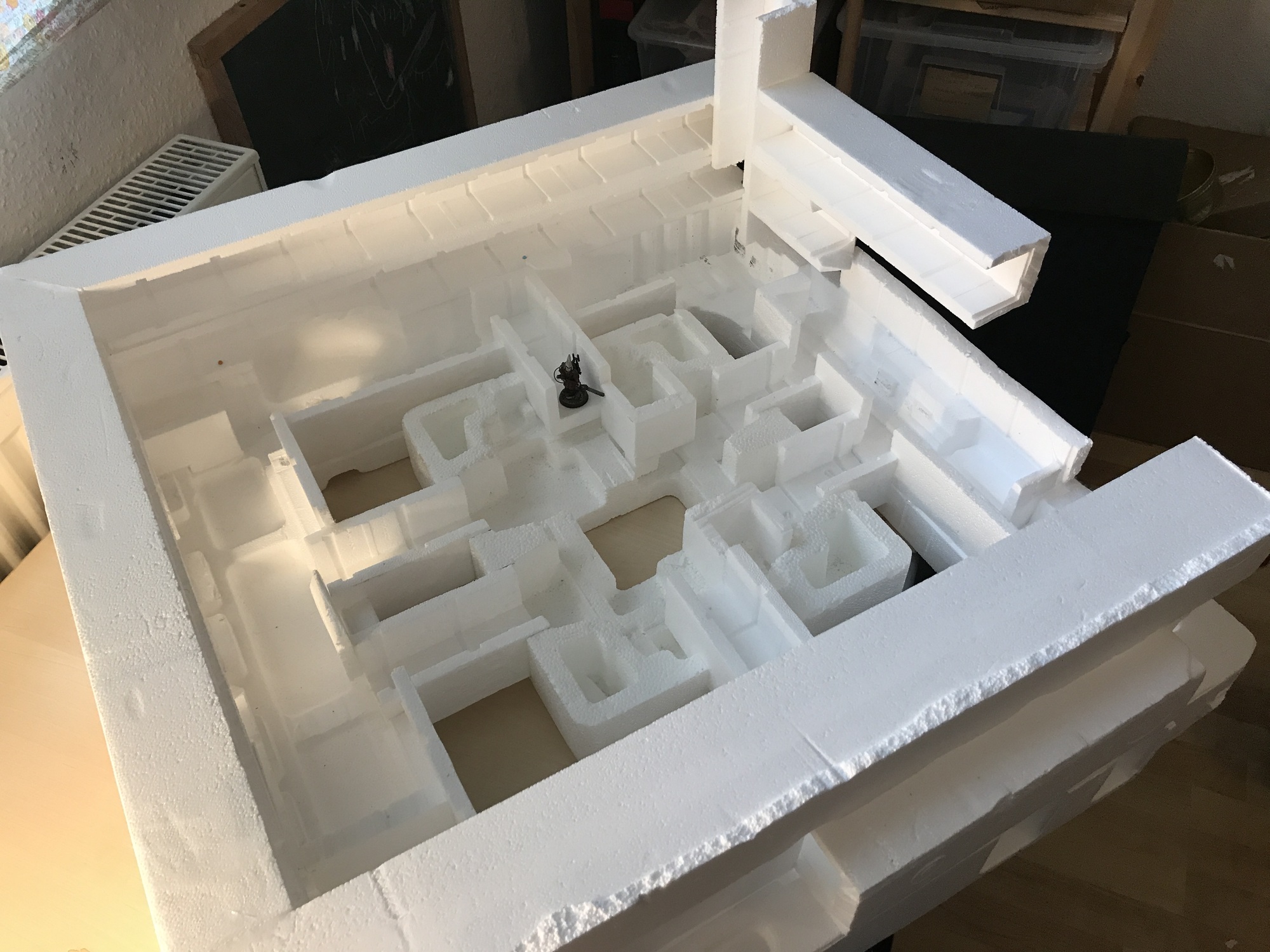 Reactions: GreyMatter, Tiny, Biggle_Bear and 5 others

I think it’d look more “Thunder cubey” without that part.
Show hidden low quality content
You must log in or register to reply here.