@maxwellrpower How did that bowling club work out for ya pal? By the looks of the tables and models, would have been a first rate affair!
Reactions: maxwellrpower
D

Ended up going to House of War as there was only a few of us
Reactions: maxwellrpower 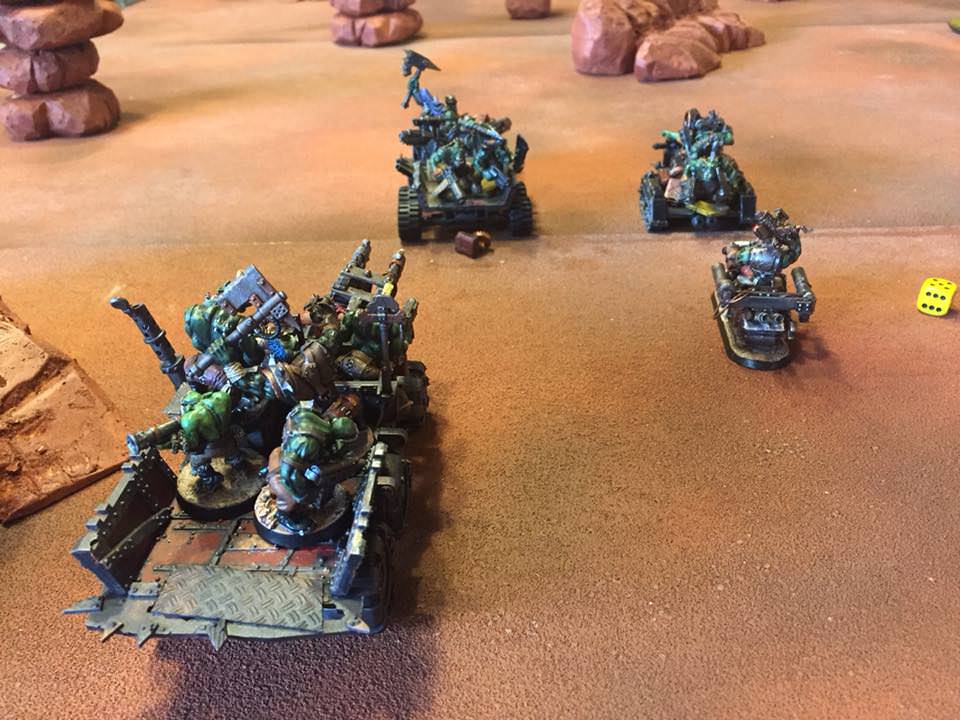 Muties appeared in turn two and began to wreak havoc for both mobs (unfortunately I didn’t get any good photos of the amazing conversions, but maybe if you ask @Zeebogie real nicely...) 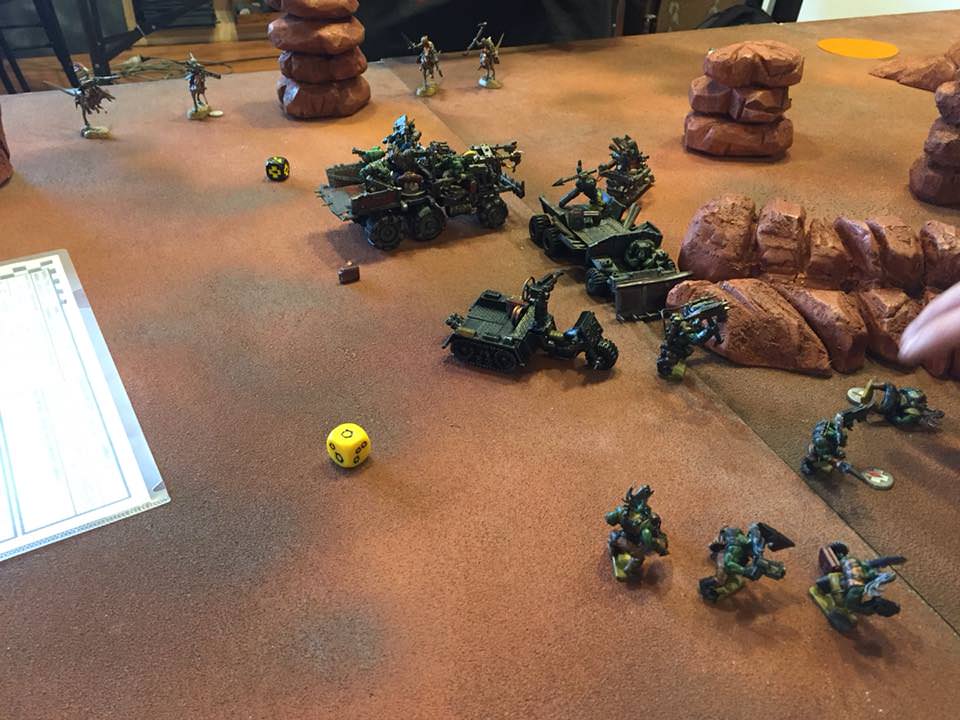 They were forced to bottle after a couple of rounds of devastating shooting, Aristhrottle of Da ‘Ard Finkers was the only driver who managed to keep his buggy from being immobilised, pulling out an emergency stop that threw almost every passenger out into the sand.
Reactions: Crowbarr, spafe and CaptainDangerous

When I get the gear back from @Crowbarr and his recruitment drive I'll try to do a mass upload now o know how to get stuff onto the site
Reactions: Crowbarr and maxwellrpower

Game 3 - Dey got one of our ladz! Wazsnagga leads his mob in a raid on Da ‘Ard Finkers to rescue his gunner Ubax, who'd been grabbed in all the Mutie induced chaos of the last game. 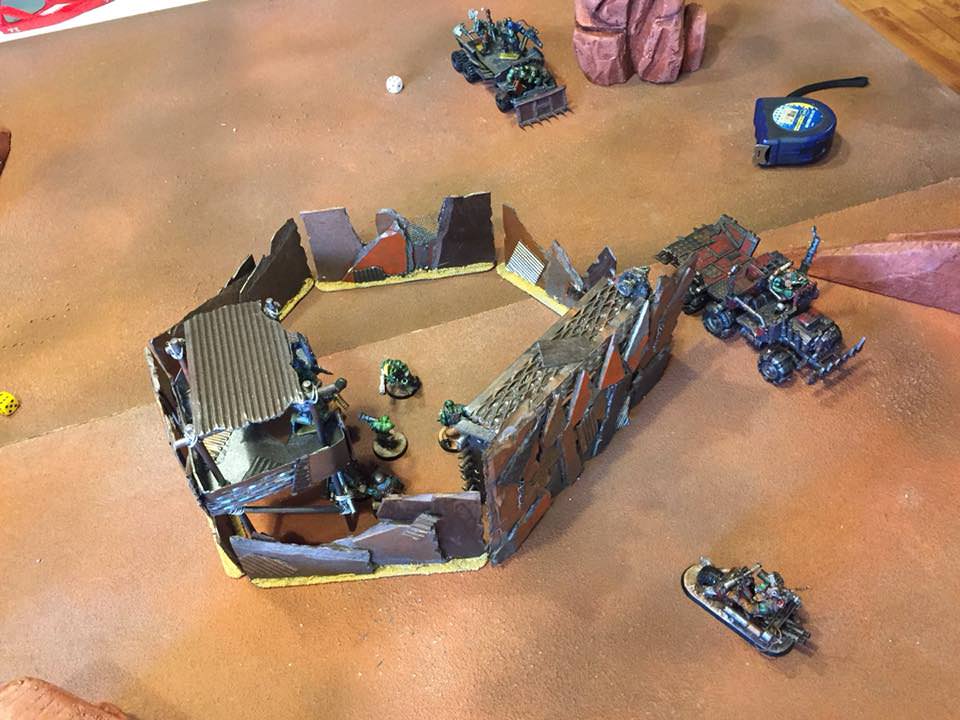 Da ladz got over the wall with no problems and quickly overwhelmed the two defenders, poor Runty was thrown off the watchtower by Wazsnagga himself. Meanwhile three turns of shooting from Gutzog’s twin kannons had left the gate totally unscathed. Grubnutz arrived with his trukk from the wrong side of the board and floored it towards the fort, totally losing his nerve at the last minute and failing to make the turn to come around and ram the gate.
To make matters worse Da ‘Ard Finkers’ buggy Da Salty Punt caught up with Grubnutz’ buggy and sprayed it with it’s scorcha. The helpless spanner was immediately set alight, sending him diving from the buggy to roll in the sand and sending Da Waggin out of control. 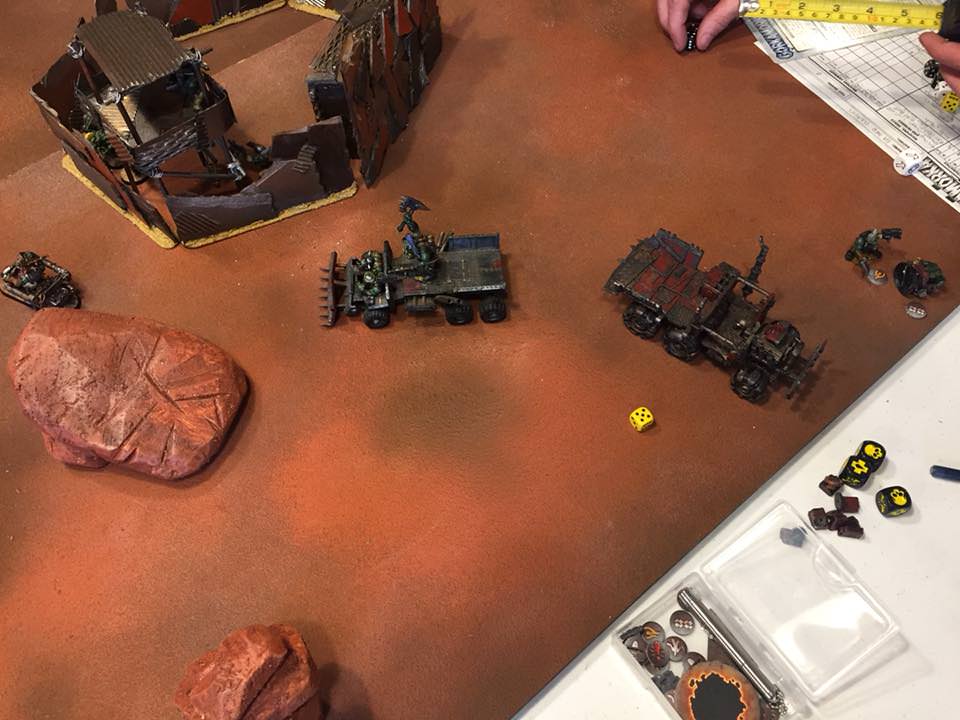 Wazsnagga and his lads, having managed to free Ubax and stomp the fort's defenders, jump over the wall and leg it into the dessert with Gutzog racing to catch up on his bike. Da Salty Punt gives chase, ramming poor Gutzog and leaving him lying defenseless in the sand. 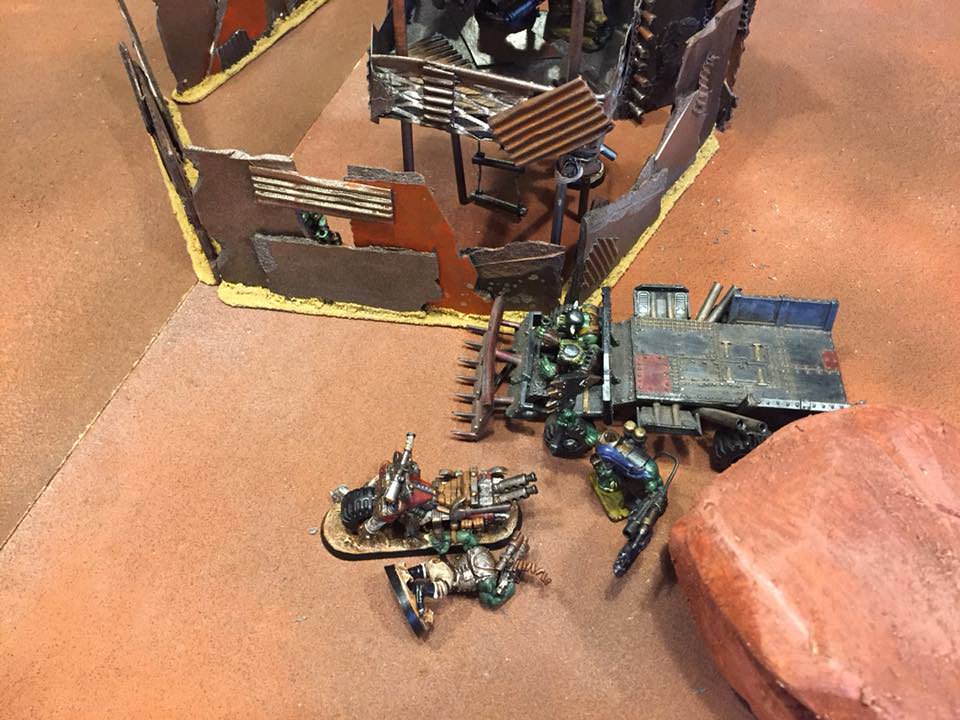 Da 'Ard Finkers nob (sorry @Crowbarr, what was his name? Aristhrottle is so good it just eclipsed my memory of the rest) gets out and sprints after his fleeing prisoner, pausing briefly to stomp poor Gutzog, but with such a massive head start Wazsnagga and his lads easily get away. 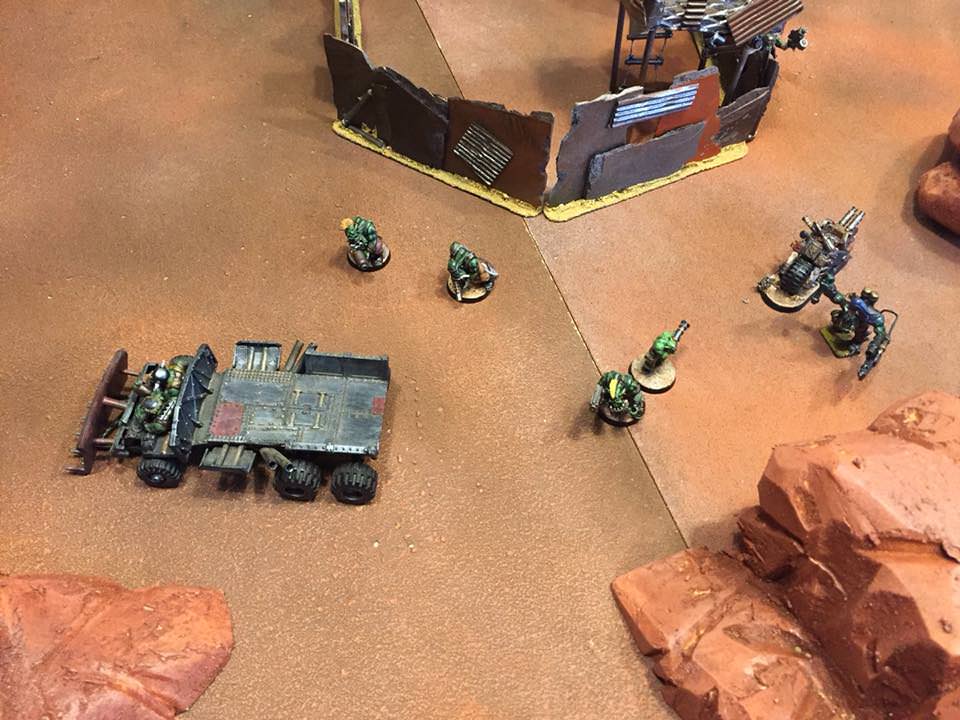 @chef0death Unfortunate that we ended up with too few people to go ahead with the Bowls club, but they were super cool about me calling up to cancel the evening before, so good on them. Will keep them in mind for future events for sure.

It went pretty well though! Four people was enough to get plenty of games of Necromunda in and three was perfect for GoMo really. I had heaps of fun, definitely keen to do another one some time
Reactions: Crowbarr and CaptainDangerous

Hopefully, if you pull this together again around same time next year I might bring a few guys down with me! Might get a bit of a State of Origin showdown thing happening!
Reactions: CaptainDangerous and maxwellrpower

I'm actually thinking about doing it again in September...
Reactions: Xeptance and CaptainDangerous

Ill see if I can scrounge up some interest. I know a couple guys who are dead keen on oldmunda and gorkamorka that live here. I think the new Van Saar might just give them the nudge I need to get em playing N17 too.
Reactions: Crowbarr, CaptainDangerous and maxwellrpower
D

maybe by September we might have all the core gangs released for N17 and maybe a few of the others as well.

I doubt we’ll have all of them but we’ll have Van Saar and probably we’ll have Cawdor too. I’d be more interested in playing NCE at a Tribe event personally, I can get a game of N17 anywhere, it’s a special kind of nerd that’s still willing to play the old rules we’ll see what everyone wants to do though.
Reactions: Xeptance and CaptainDangerous

I haven’t had much of a recruitment drive just yet as I’m too busy painting my own ork trukk now, but I’ll ask around and see if some friends are interested
Reactions: maxwellrpower
D

maxwellrpower said:
I doubt we’ll have all of them but we’ll have Van Saar and probably we’ll have Cawdor too. I’d be more interested in playing NCE at a Tribe event personally, I can get a game of N17 anywhere, it’s a special kind of nerd that’s still willing to play the old rules we’ll see what everyone wants to do though.
Click to expand...

maybe offer a campaign in both
Reactions: maxwellrpower

wow i know its last post was 2017 but i dont think ive posted since 2015 how are you all doing?
Reactions: Stoof and spafe

We are mostly alive.

almic85 said:
We are mostly alive.

@maxwellrpower any chance of a 2019 event?
Click to expand...

We had one in March, which went fairly well. I would love there to be an event in March 2020 as well but frankly I'm hoping someone else will step up to organise it. I'm not particularly good at such things, but if someone does it I'll be there and happy to lend a hand with everything.
Reactions: Deecee, CaptainDangerous and radulykan
R

Do it!
The uk one is in March as well so having a Skype during the events with some sort of tie in would be great

TribeMeet 2020 is a gathering of nerds and enthusiasts of all things Necromunda for a weekend of action-packed gaming among friends (28-29 March 2020)! The campaign will accommodate both the Community Edition (NCE) and Newcromunda (N18) rules, so bring whichever gang strikes your fancy. The...

We are happy to share all resources developed for our meet - rulebooks etc etc and advise on Kickstarter etc if that helps? You’d just need to find a local printer and venue.
Reactions: spafe

Well, alright, that's a bit difficult to turn down (especially in light of some masterful manipulation from our beloved @CaptainDangerous behind the scenes).
Reactions: spafe, ClockworkOrange and radulykan
Show hidden low quality content
You must log in or register to reply here.
Share:
Link
Top Bottom