Lol those were some powerful skill combinations. The plan was to let one side almost win then realease the squigs on the winners, either through the ratskins calling on the hive spirits or as it happened, a beastmasters psychic death scream. Your guy was some kind've embodiment of all of the hive spirits though and didn't have to break a sweat as he waded through beast master after squig after beast master etc maybe he comes back next time with a load of rat skin renegades in tow? Unfortunately the toxic waters have robbed him of some memory and all those skill combos have been forgotten
Reactions: CaptainDangerous and Biggle_Bear

Through my games I saw an exciting arc emerge.
My first game was a scavengers scenario using captives as the loot the second was a hit and run. Biggle's motive was to terrify the inhabitants into fleeing the area with acts of terrorism, but that didn't work, necromundans have become desensitized to such atrocities. We then reached out to an esher gang for help but our cultural differences, esher and people of another dimension, was too great and we quickly fell into a pitched battle. Partly from the corrupting influence of the universe and frustration of losing to our betrayers a member of Biggle's own gang turned on him and took leadership of them. After that they turned to acting in their own self service and trying to carve their own little section of the area. Unfortunately they failed and continued to suffer losses and greater poverty. The Justice Friends finally left the universe back to their own, worse for wear for their experiences./SPOILER]
Reactions: CaptainDangerous, prewarsalad, Resmire and 2 others

Kitten heard a noise from the pile of rubble that she had hoped would conceal her position, but wasn't surprised to see Biggle standing there above. The jerk let out a laugh at the sight of her.
"Kitten you smell aweful. And you look like you spent the night in the belly of one of those beasts!" But Biggle's grin disappeared when she leap the distance between them and gave him the same stare as the last one to disturb a nap.
After a moment that felt like an eternity she snatched the hunting rifle from him and told him plainly "next time I'm going to be the sniper and you can get your but kicked."
At that moment Biggle realised that many of her body parts had dematerialised. She would soon need to respawn to avoid dying, but it was a process that would sever the strengthened bond she had to the laws of physics that developed.
As she walked away from Mankfester Biggle interceded "but we still need to save these people."
"Sod 'em!" Snapped kitten in reply. And with a sigh and a heavy heart Biggle conceeded that he wasn't going to be able to accomplish anything in this city.
Reactions: Ardavion, Scavvierising, CaptainDangerous and 2 others

You're making me really regret not being there for the second day. 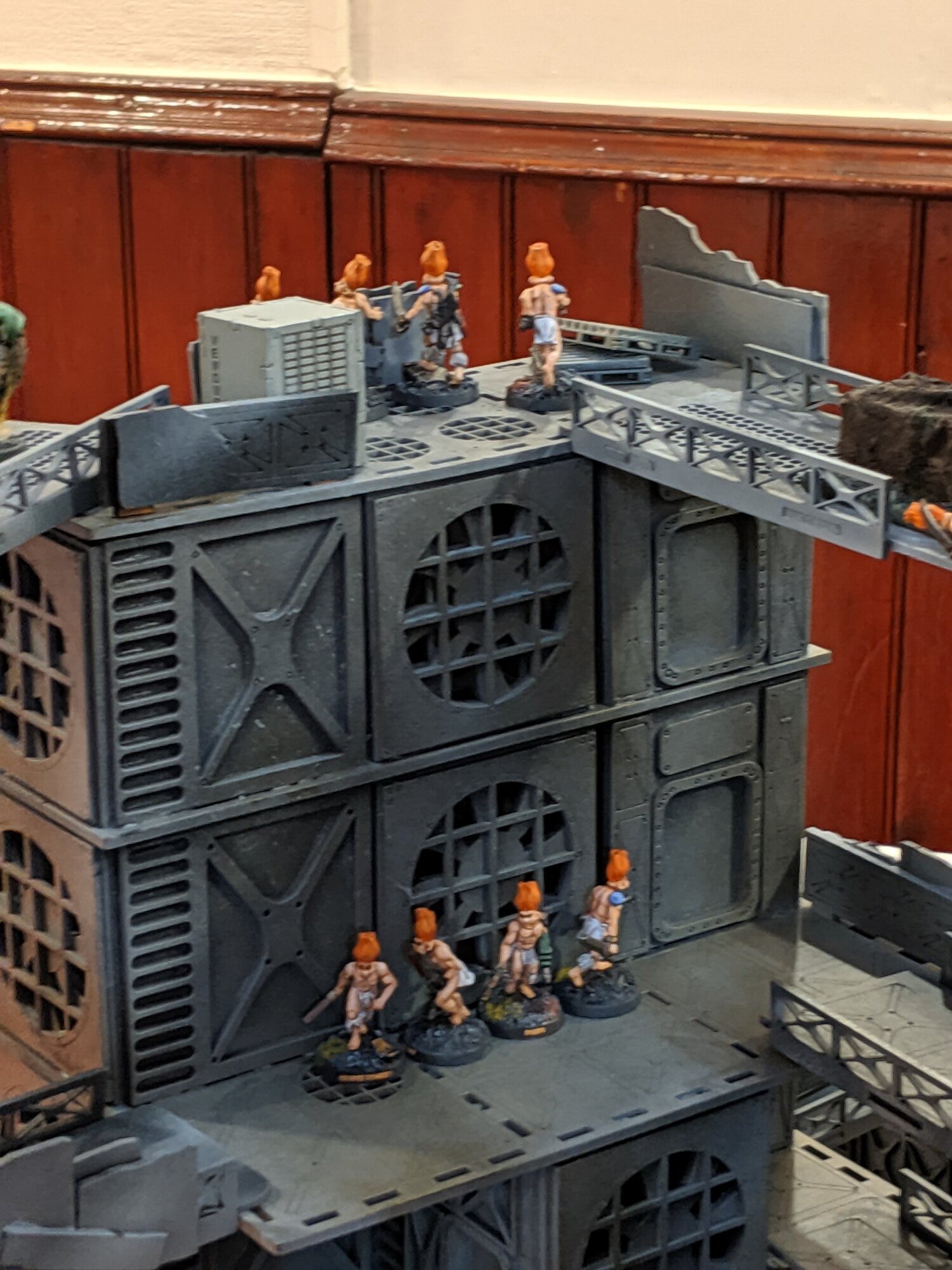 Do we have a pic of the troll conga line?
Reactions: CaptainDangerous

radulykan said:
Do we have a pic of the troll conga line?
Click to expand...

Conga line? didn't realise they had the brains for that kind of thing
Reactions: CaptainDangerous, ClockworkOrange and =][=SW1=][= 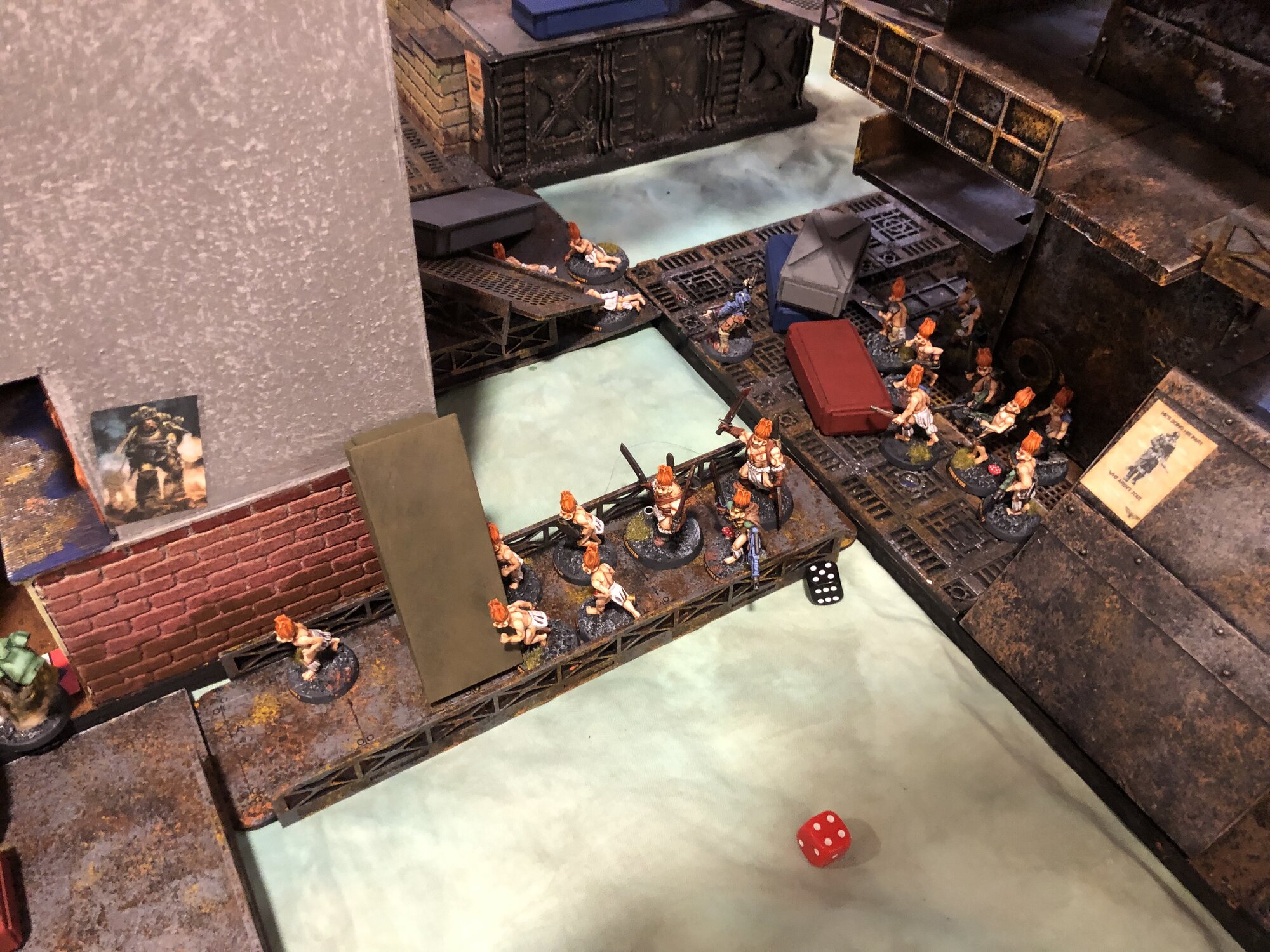 This was taken before the party really got going. I think @CaptainDangerous has one of it in full swing!
Reactions: MedMos, =][=SW1=][=, undertaker and 3 others

More of a case of my side of the board kind of forced me to start low down for the most part.... and had plenty of squigs and zombies to keep me down there unfortunately....
Reactions: ClockworkOrange

They just weren't getting there fast enough... it would have been a case of whack a mole, each person coming up the ladder would have been swatted back down again haha. Ah well, theres always next time...with lots of templates....
Reactions: ClockworkOrange 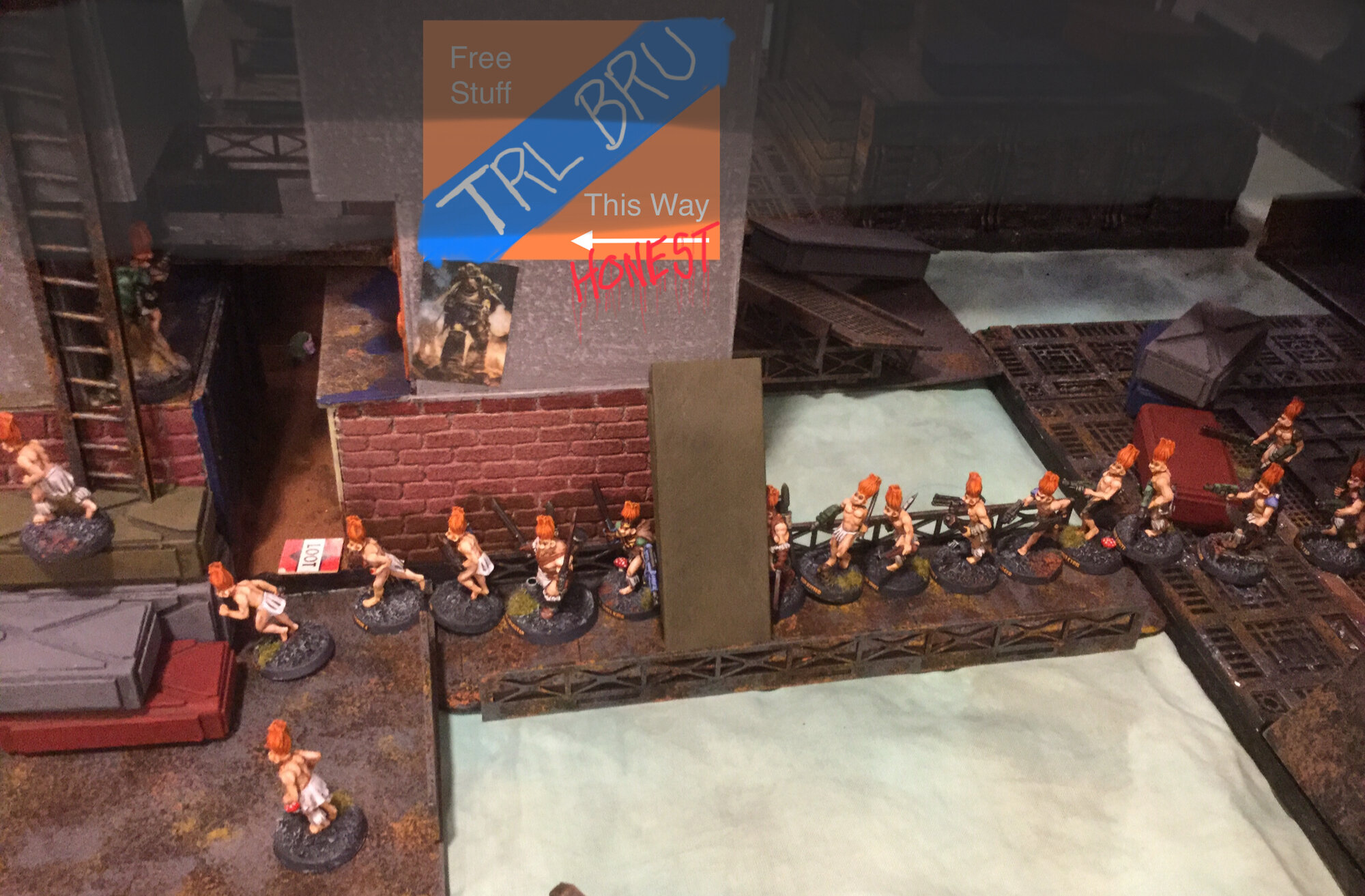 Oh the conga line of death! We will miss you Rex the 1st. Long live The Rex!
Reactions: CaptainDangerous and ClockworkOrange 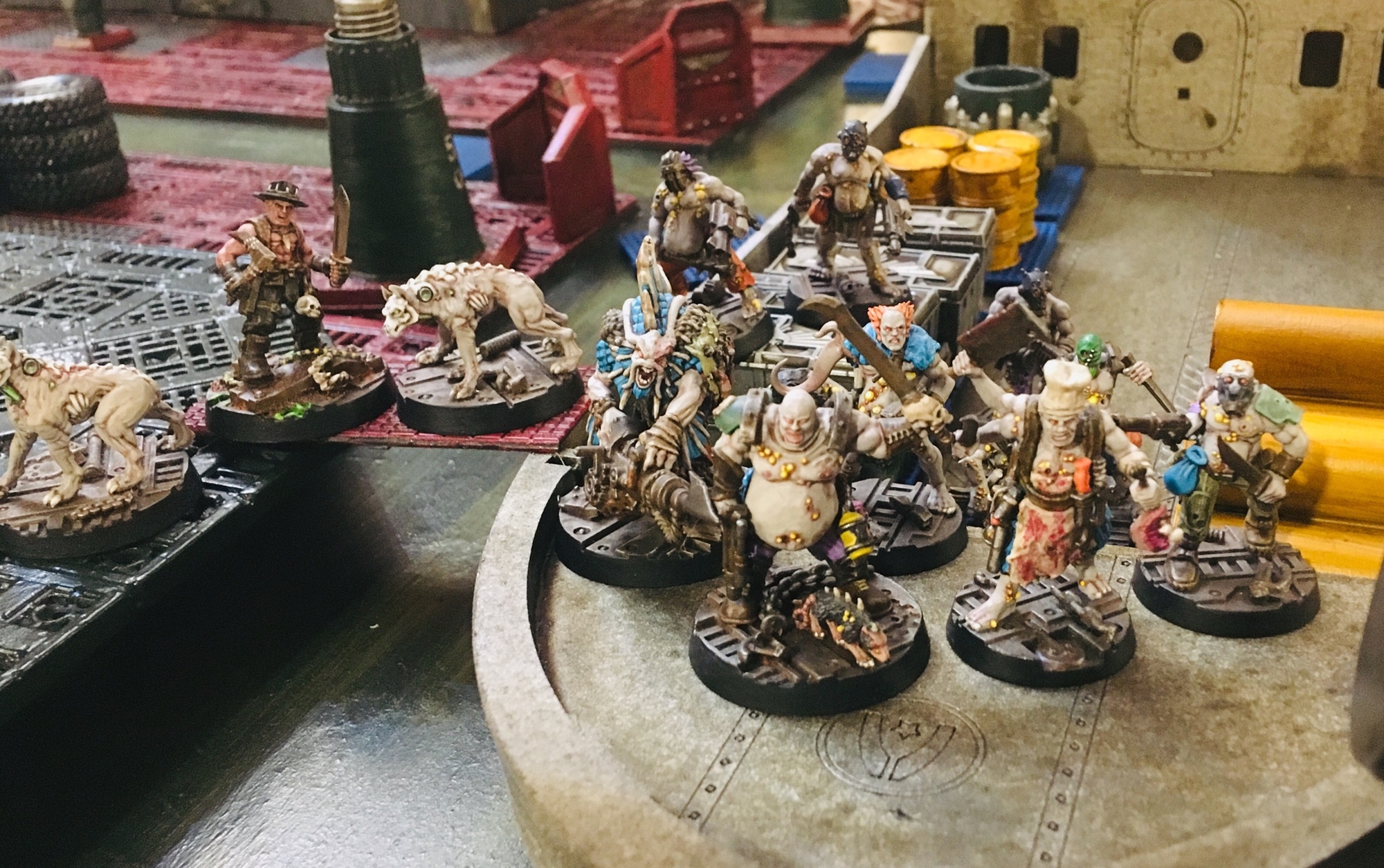 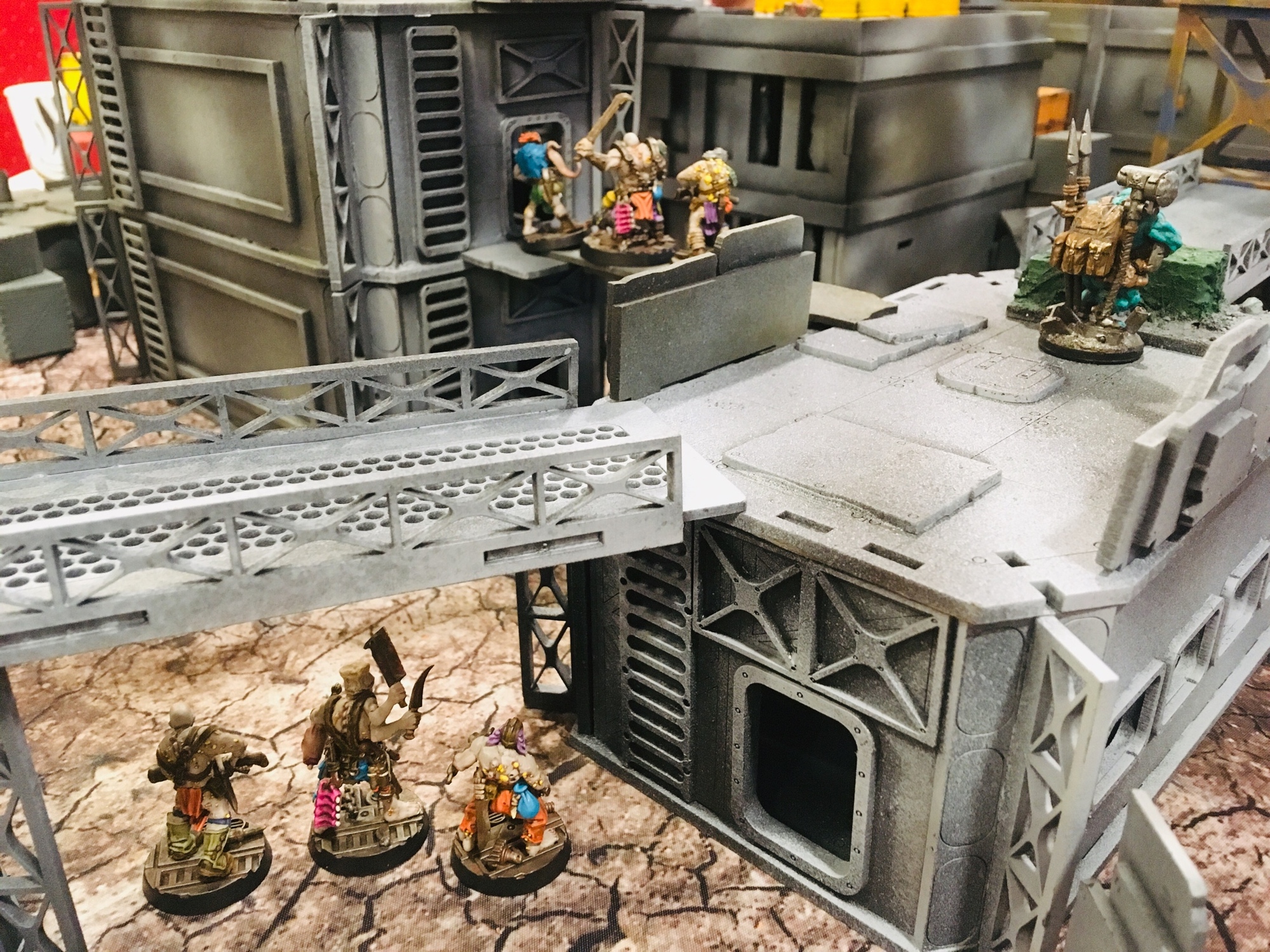 The first thing on their minds once they arrived in Mankfester was to feed their grumbling bellies, so they headed out to see what delicious treats the dome had in store for them. 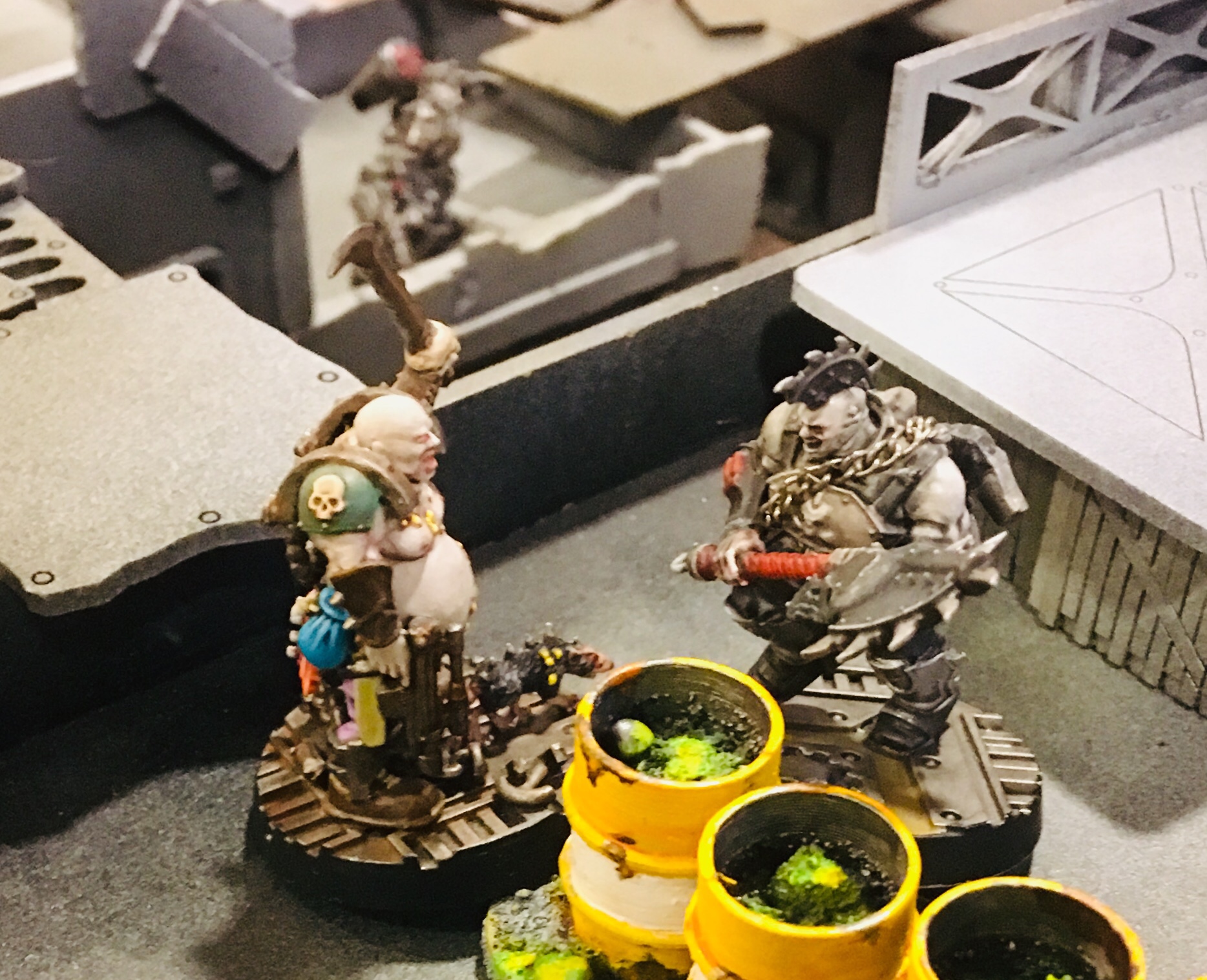 But Gastron was soon in bother when he decided to ask an axe wielding maniac for directions to the nearest hive guys, who showed him exactly were to go, only it wasn’t the answer he was looking for. Marco took vengeance for his bosses beating by hacking another rival ganger to pieces with his trusty, rusty cleaver, but it was of little consolation to Gastrons pride. 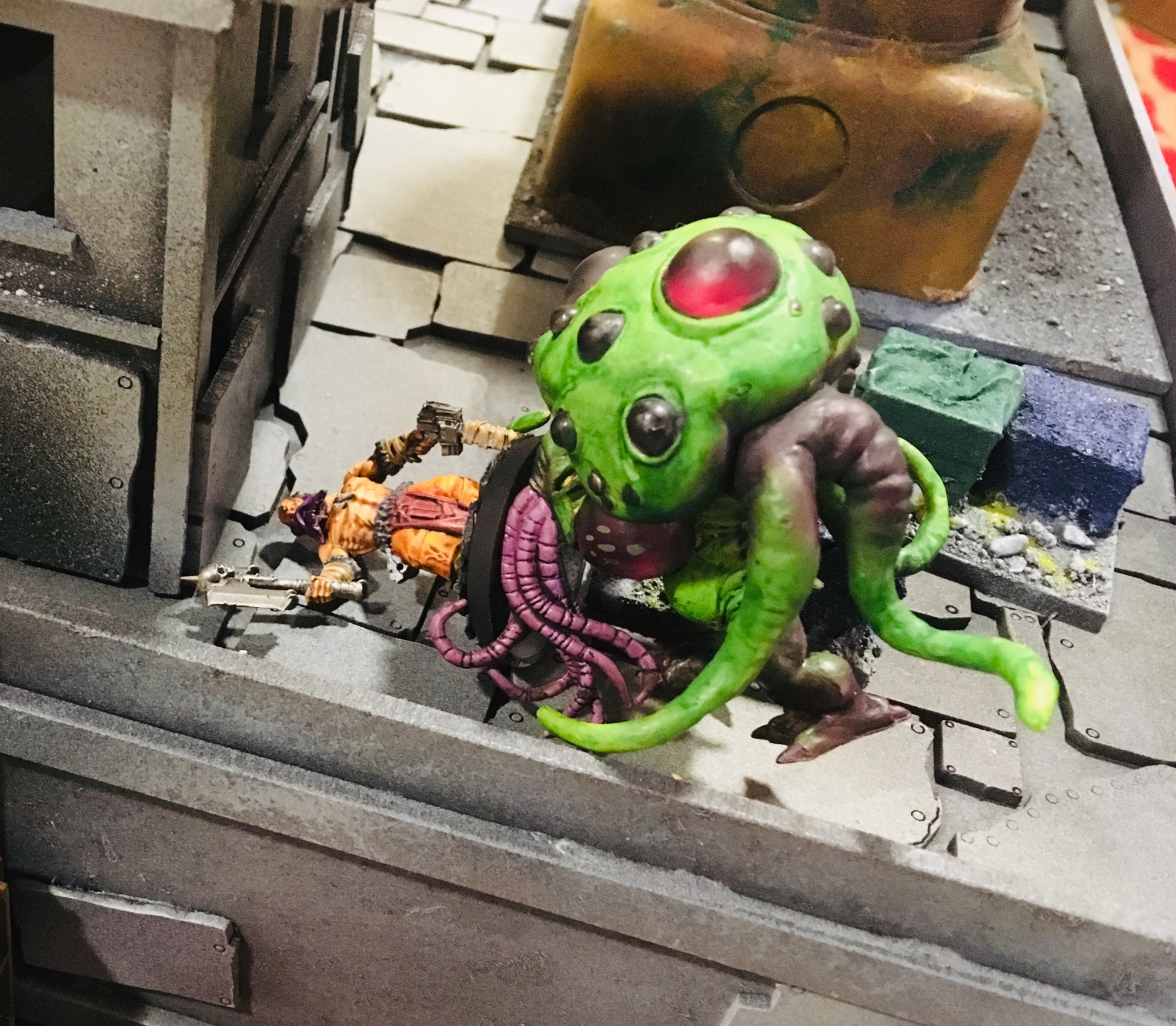 Then when everyone suddenly remembered that the area was rife with mutant horrors, when one reared its mangled form and dragged a hapless ganger to it’s sumpy grave.
The rest of the Ghouls grabbed the wounded Gastron and legged it. They’d have to get fed elsewhere. 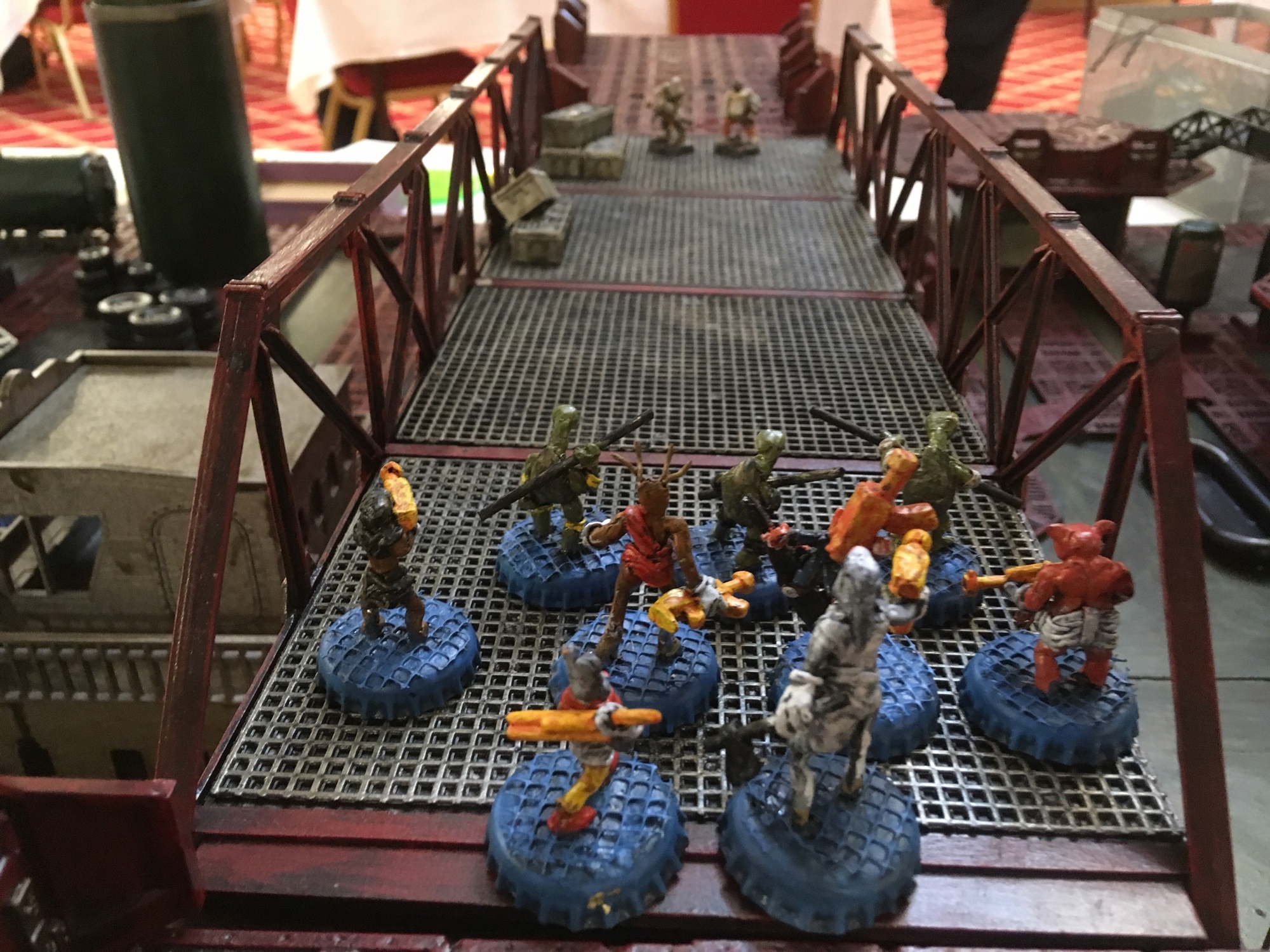 The Ghouls, with the help of animal tracking expert Mick Fungee, happen upon a delicious looking minagery of a gang. Imagine the things Marco could whip up with this little lot. They set up the ambush and..... 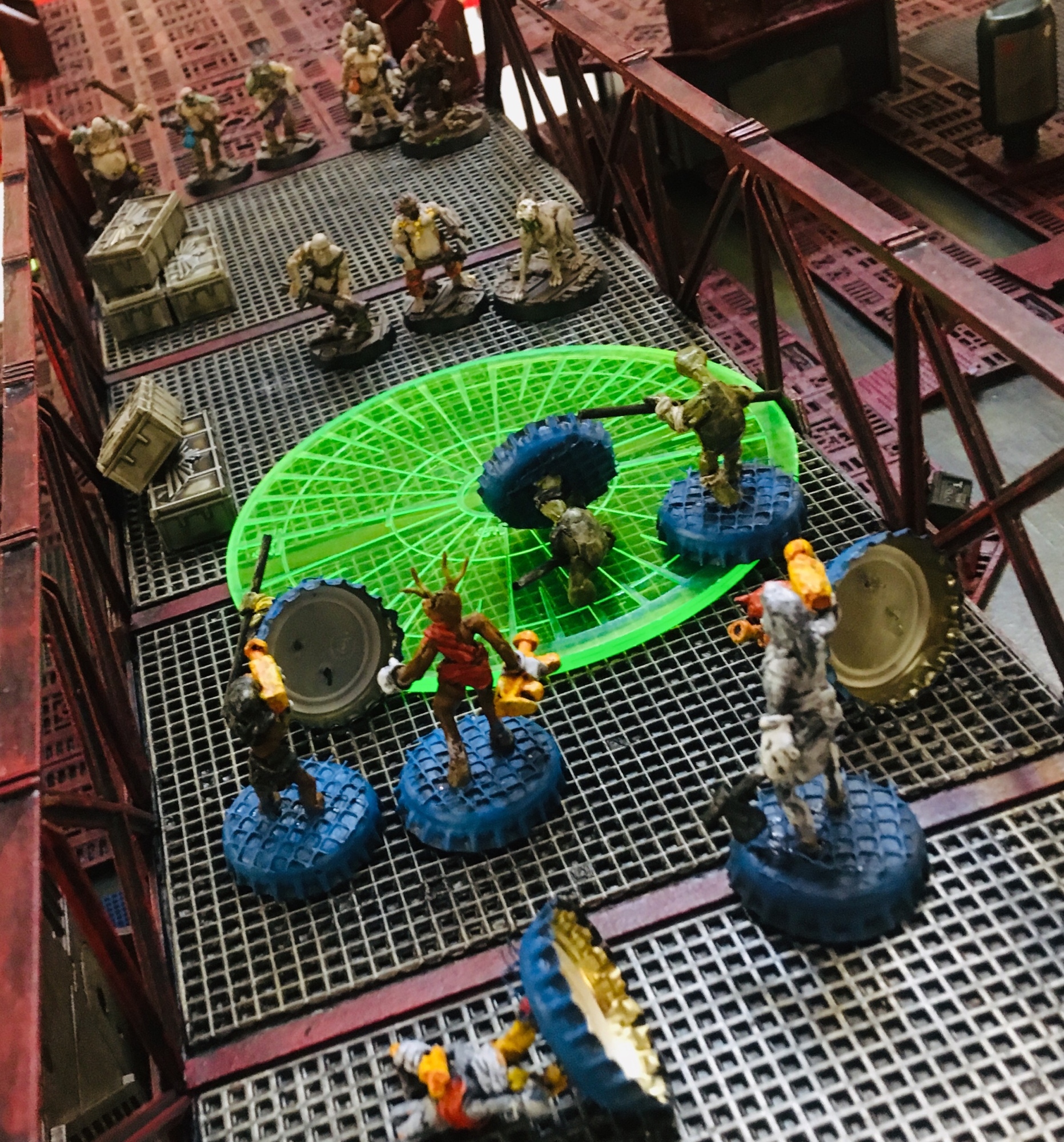 Tox bombs, bullets and spears are flying everywhere as the Ghouls prep their next meal. Horse burgers, weasel kebabs, space kitten pie, it’s all on the menu tonight and nothing beats the tang of tox bomb marinated meat. But no turtle soup I’m afraid, Gastron got a special job for those four mutant turtles. 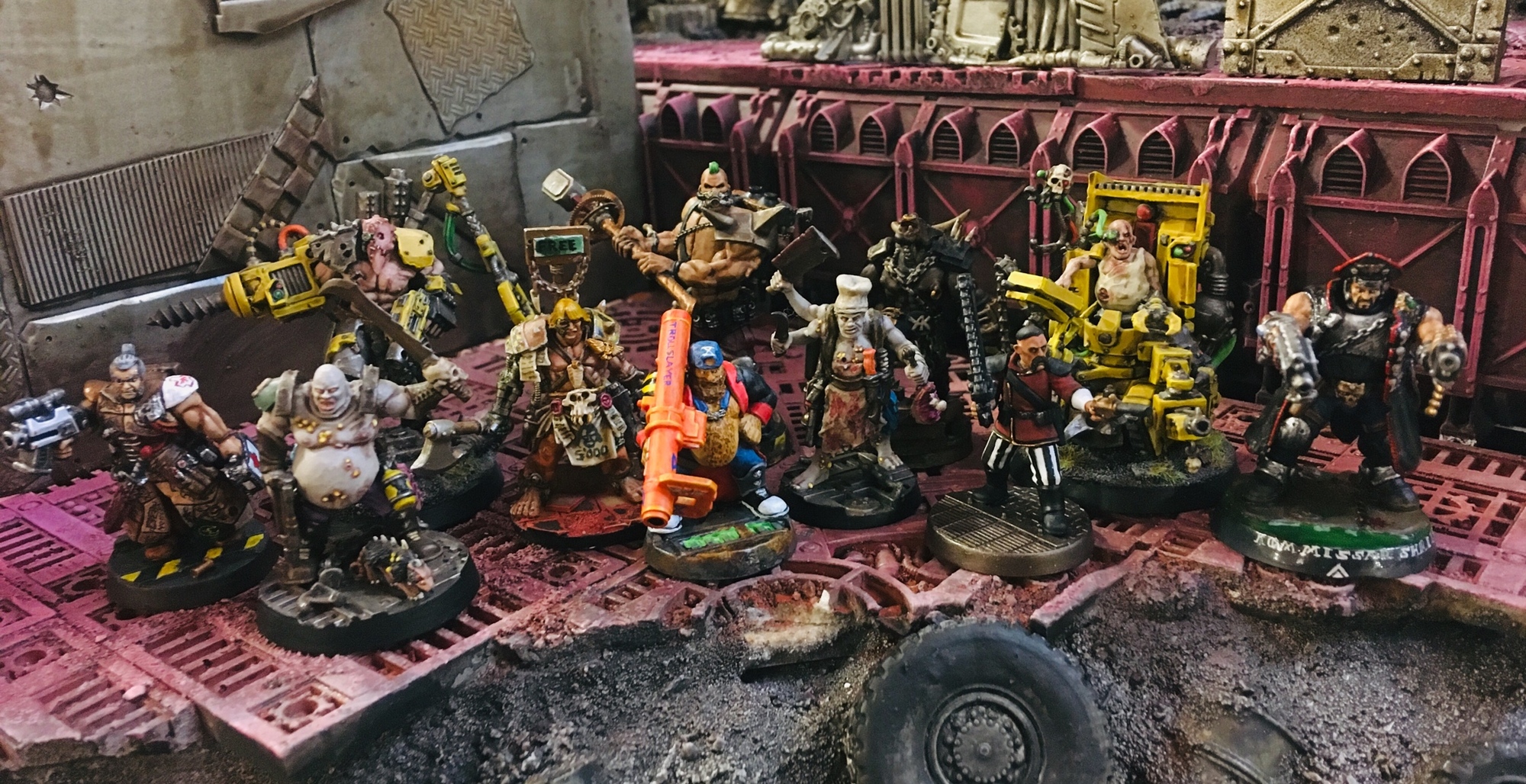 With their stomachs well lined Gastron and Marco join the rest of the lads on the Captains stag do at the pleasure cube. What happens on tour, stays on tour, but I can tell you, no, assure you, the captain lost more than just his eyebrows.
Bebop of the deft punks was invited on the do but didn’t make it unfortunately, not sure why, Gastron swears he sent an invite.... 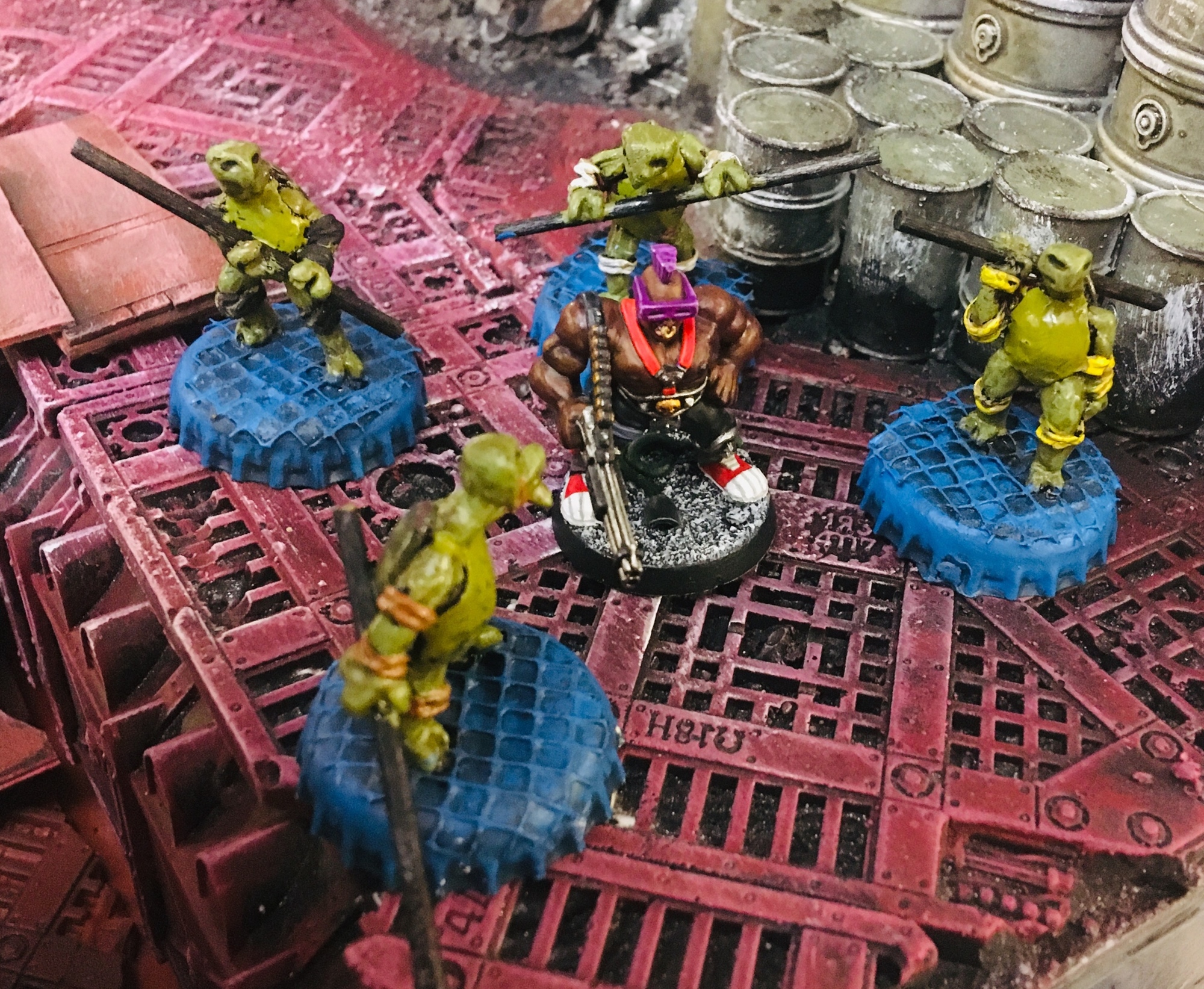 Hey bebop! Remember when you said you had Gastrons back against Stoof-209 and then did nothing as he bravely fought the beast single handed...... Pay backs a bitch! 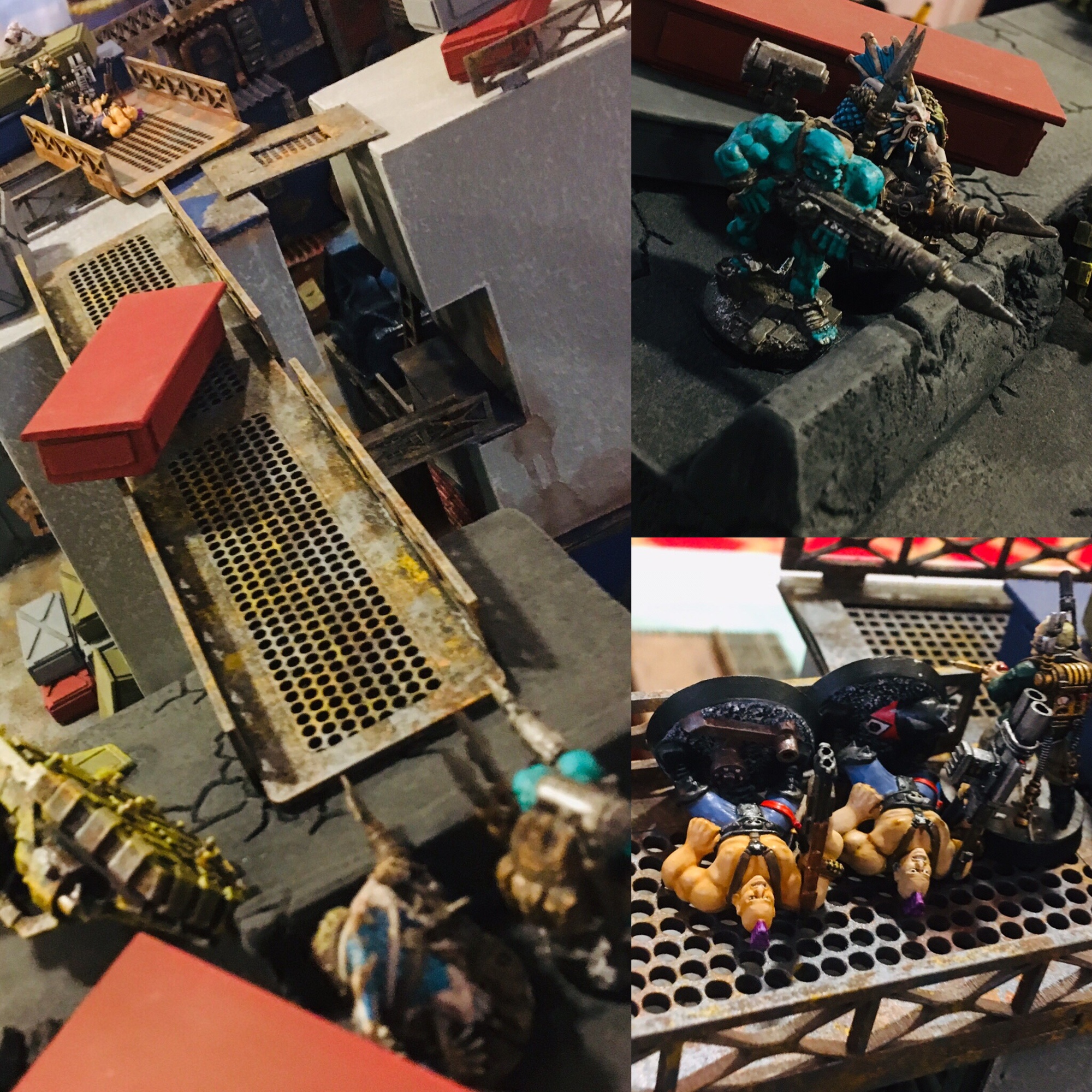 Meanwhile, the Ghouls two scaly brothers, Eddie and Mutant Dangerous, took it upon themselves to heap more misery on the deft punks by staging a hit on there unsuspecting leader while the rest of the crew enjoyed the stag do. First skewering the leader to one of his own men then wildly miss throwing a tox bomb that some how landed at the skewered pairs feet and blowing them of the tower and into the sump below. *scaly fist bump.
The Deft punks boss was later seen emerging from the sludge, limping and with a radiated glow. That guy must be line with lead! 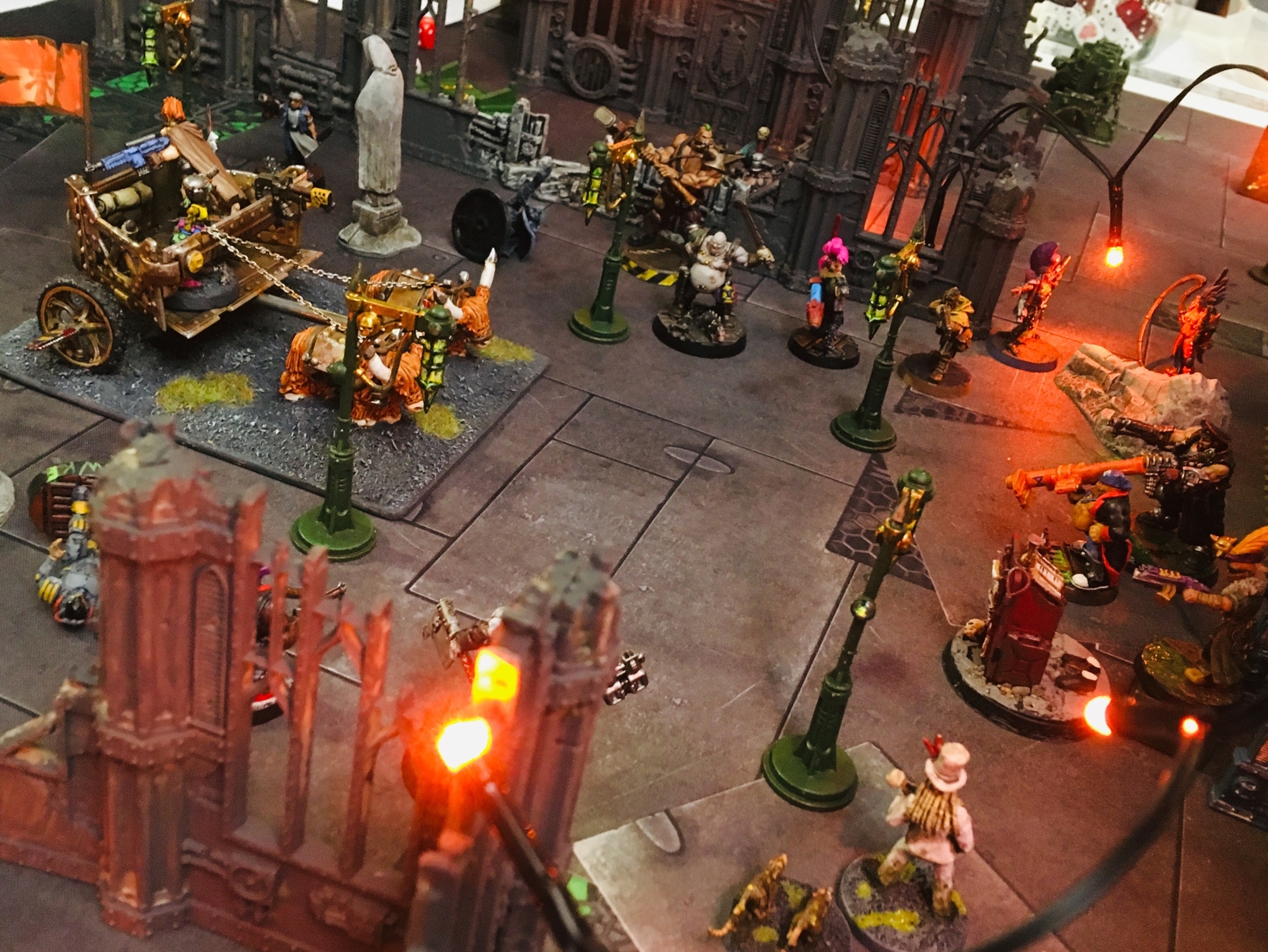 Then it was the big day! The cathedral of Mankfester was festooned with fancy lights and the isles were bustling with expectant guests. Gastrons attire didn’t seem to be going down to well with the other guests, as he’d lost his suit and chose to wear nothing more than a dickie bow, and had to deal with the mutterings of “who’s the naked guy?” the whole day. The bride couldn’t have made it half way down the isle before all hell broke loose and the bullets started flying. The priest was the first to bite it, obviously, but the troll king seized the opportunity to take out Gastron early doors. Knowing full well Gastron was a dangerous, fearless, handsome and down right awesome opponent, the troll shot him in the gut before he could even draw his gun. So, badly wounded and seriously hung over Gastron makes a hasty exit and along with the Ghouls, slinks back off into the underhive. Despite getting hit with a massive axe and shot in the gut by the troll king Gastron had a ball in Mankfester, the stag do was legendary and he did manage to get off with one of the bridesmaids....Their the hairy orange ones pulling the cart right?

Thanks to everyone who help organise this brilliant event. Thanks to all the awesome providers of beautiful terrain to battle over and thanks to everyone who attended for making it a great weekend of gaming with a great bunch of yakkers.
Reactions: MedMos, KungFuPanda, Punktaku and 11 others

I'll get you Gastron, you great fat stinkbag!!! - Bebop ☠
Reactions: Ned Noodle, spafe, CaptainDangerous and 2 others

The Trolls will not forget which side of the Cathedral you chose Gastron, one day the Scavvy tribes shall meet in battle!
Reactions: CaptainDangerous, Ned Noodle and spafe

@=][=SW1=][= how about "squigs are not a resource" as graphitti? Or a wanted poster of some of the outlaw gangs?
Reactions: =][=SW1=][=, CaptainDangerous and prewarsalad