Thanks for the great battle reports. I hope everyone made it home ok. I wish I could have been there.
Click to expand...

I assume you know that @CaptainDangerous has a little Scummer Squat called Biggle? Yeah. He got into close combat with the Reaver. It was not kind to him (*splorch*).

Hopefully Captain will be able to upload some of his pictures and fill in the blanks of his battles - probably after a nice big sleep!
Reactions: Ned Noodle and CaptainDangerous

Driving six hours, late at night, on a pitch black empty road is no fun at all .......especially for ardavion when the captain starts falling asleep!
Reactions: Ned Noodle, Deleted member 10658 and Ardavion

Yep! I've done the A90/A1 drive down to Gateshead whilst tired at night and it can be tough to stay focussed! I found the trick was to make myself uncomfortably cold with the aircon Glad you made it back safely.
Reactions: Deleted member 10658, CaptainDangerous and spafe

Cheers stoof!
Thank you both for such a great weekend of gaming and sword waving!
You have such a beautiful home and family stoof, games aside it was a real pleasure to be there!
And well played adavion! A well deserved win, even tho team 9 softened up lil revie for you to claim the rewards!

Iv updated my previous posts with captions if anyone was wanting abit context to the pics, and sometime this evening ill be reporting on sundays action and the big race!
Reactions: Ned Noodle, Deleted member 10658, Malo and 1 other person

Thank you, and my pleasure. If you're ever up in the frozen north give me a ring and we can sort something out for a game or two.
Reactions: Deleted member 10658, Ardavion, Malo and 1 other person

Photos look great and sounds like it was a fun YakDay!
Reactions: Deleted member 10658, Stoof and CaptainDangerous

Thanks @CaptainDangerous and @Stoof for a wonderful weekend playing Necromunda!

For those that are interested, I've updated Doxxer's Midnight Wreckers in the Tools, so you can see how they fared; an unbelievable amount of full recoveries, a chest wound and one death that became a personal goal; replace the dead Techno!

I'm happily surprised that I managed to win overall up North; it was mainly down to luck in quite a few scenarios, and I lost the Hit and Run scenario against Stoof quite down to my own mistake of running 25% of my guys into the path of an overwatching plasma gun, so my overall head for tactics shows there...

Vehicles are a Pit Slave's friend, as they count for an unbelievable amount of additional armour. Small arms fire basically couldn't do much, if anything, most of the time, which makes a change to my squishy Pit Slaves having to fork out for armour plates to last longer.
The tactic of having the bikes go ahead as a screen against people shooting at the truck, carrying pretty much the rest of my gang, paid off; while the bikes usually ended up ploughing into walls, the only persistent damage was an annoying squeak that - because the bikes kept ploughing into walls - didn't really make any impact.
The vehicle rules are in-depth, very in-depth; there was lots of head-scratching and referring to the rules for pretty much every aspect. I think if the rules are used constantly, and/or reference sheets for the rules were available (are they?) then it would have made the vehicle movement/combat/boarding actions much simpler.
Don't run into the path of an overwatching plasma gun.
Reactions: Ned Noodle, pressure, Deleted member 10658 and 2 others

I did get lucky in that Hit-and-run scenario - having reinforcements arrive directly behind one of your remaining gangers, outnumbering you right away and immediately high-impacting one with crazy melta powers was pure chance.

I was prepared to lose that scenario right away when I only rolled to have one ganger on the table to take on four pitslaves Necromunda can be a cruel mistress!
Reactions: Biggle_Bear, Deleted member 10658, CaptainDangerous and 1 other person

A couple more pics I forgot to upload:

Who's this unfortunate creature, caught mucking about in a Guild Family's out-of-hive storage facility? 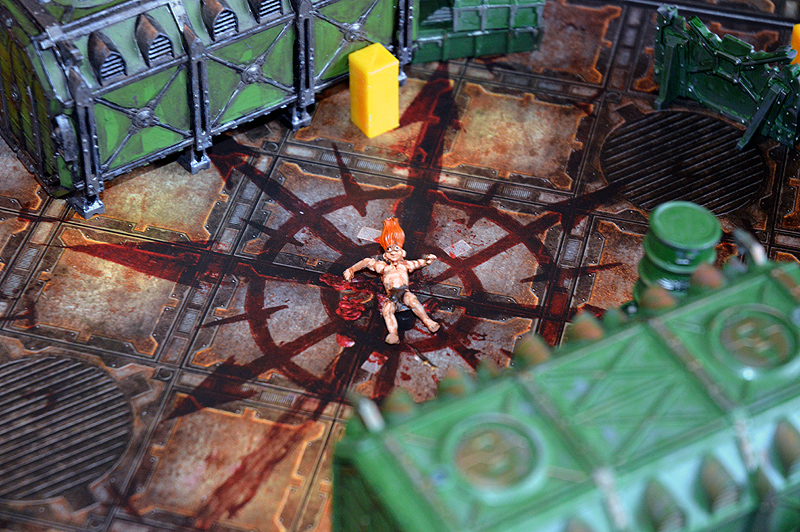 A rather unimpressed Guilder with the excitable Captain and permanently ragey Shrieken, trying to burn the racw winner with unholy mind powers "congratulating" the race winner... 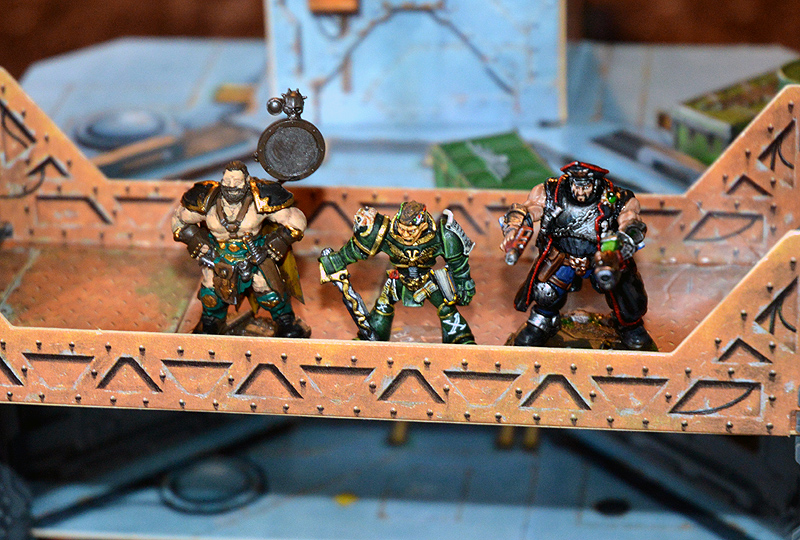 Day 2:
With the dust storms becoming a barrage and the surface radiation levels rising, the Gangs duck below the dunes into the sprawling under city...

Attracted by a pretty glowing light in the darkness, doxies free cyborgs get jumped from both sides. Seeing the Guilder again sends the group into a rage but they get fought back, not before taking the hapless bait plasma gunner!

Storing their ammo while the rest of the team search for new spore sites, number 11 and his subordinates get distracted by the friendly tunnel scum Dirty Ned. Bearing the gift of a captured troll, the servitors forget their primary objective and go to town water boarding the little mutant!
Misinterpreting it’s screams as a maiden in distress, the wreckers send a fighter to quickly steal some ammo while the rest investigate! A firefight breaks out and there is a struggle until the pit fighters discover the source of the screams. They attempt to put it out of its misery before getting enveloped by the the returning team 9, only just escaping.

Successfully returning with wild mushrooms and mineral spores, team 9 get to work processing the harvest. The Hawks, sensing an easy prey, sneak up on the busy servitors ready to pounce! All they need to do is get someone past to reverse the vats and all the captains labours would have been for nothing, teaching him that only the guild have the right to new products!
The ambush almost works but Dirty Ned shows up just in time and gets behind the van Saar line! The hawks send biggle ahead, hoping he would be too small to notice, but Disaster strikes and the Hawks leader and heavy both get killed in the resultant crossfire!

Smelling blood and forming an unlikely truce, the wreckers and team 9 head straight for the Guilder storehouse, knowing that it would be unguarded wile the Hawks lamented their dead!
What both groups didn’t anticipate is the guild sanctioned killing machine on sentry standby!
Turning a corner, a group of servitors led by Ned, are faced with an Ed-Stoof-209 affectionately known as a lil revie!
Ned instinctly runs for cover and takes a chunk out of the mechanical nightmare, the rest of the group aren’t so lucky, one servitor exploding in a direct missile strike!
In the storeroom the captain comes face to face with his ally, and promptly opens fire! A well thrown grenade takes the captain and his heavy out of the fight, but not before Doxie falls to a shotgun blast.
Hearing the explosions and feeling the ground shake as the robot enters the room, the captain sounds the retreat.
The Pitslaves then grab as much as they can as revie trains it’s weapons on them
Biggle, who led the slaves there, and two fighters charge! Biggle tells them how best to fight it but gets kicked across the room by a giant metal foot!
The nightmare sets of it auto launchers but the close combat experts are unfazed and use their altered body weapons to maximum effect! The machine eventually falling to a mining drill!
The Pitslaves load up and head off, the guild aren’t going to be happy about this one!

The Big Race: The Albino Stalion Cup (its a trophy)

Reactions: Ned Noodle, MedMos and Stoof
Show hidden low quality content
You must log in or register to reply here.