Official Ticket Holders list - If your username isn't known I've listed the details we have please let us know your yak username.

Reserve List - want a ticket? let us know below and you will be offered a chance to buy any tickets that become free.

Spare Tickets will be allocated in strict order of you telling us below that you want one, any previous requests via the committee are now null n void - on the basis we haven’t kept adequate records to know who asked first.

If you have a ticket but aren’t coming please get in touch so we can arrange for your ticket to be sold on to the reserve list, and you can get your cash back from a new happy Yakker!!

Yaks - to those linking here, please note we currently do not have any spare tickets, but if you want to go on the reserve list leave your name below.

Sold to @Luke82 you lucky Yakker you!
Reactions: Luke82

Sold to @Corkers5 you lucky Yakker you!

You sold 1 ticket to 3 Yakkers?!?
Reactions: Scavvierising, ClockworkOrange and undertaker

And we have a winner of the Sump City Radio Ticket! Congrats buddy you get to go to the ball!

Here's my entry for the champions comp, there are a few more photos on the community page but I couldn't fit them all on as attachments.

No-one remembered his real name, or his face before it was hidden behind his metal mask. And if they did remember, they would not have spoken it. They called him instead The Beast of Baulsover, and none downhive dare look into that gleaming skull beneath his hood.
The beast recognised the god of the local Corpse Grinders as his own by a different name, but he had little taste for their chain-fuelled butchery. His weapons instead were lightning claws, slicing gracefully through the bone and sinew of any standing in his way. He dedicated as much blood to his god as any slaughterborn, though. But his loyalty was to the Heretek Demagogue, Omis Mor, who had fitted his skull mask, claws, and heavy ornate armour for his immense frame. 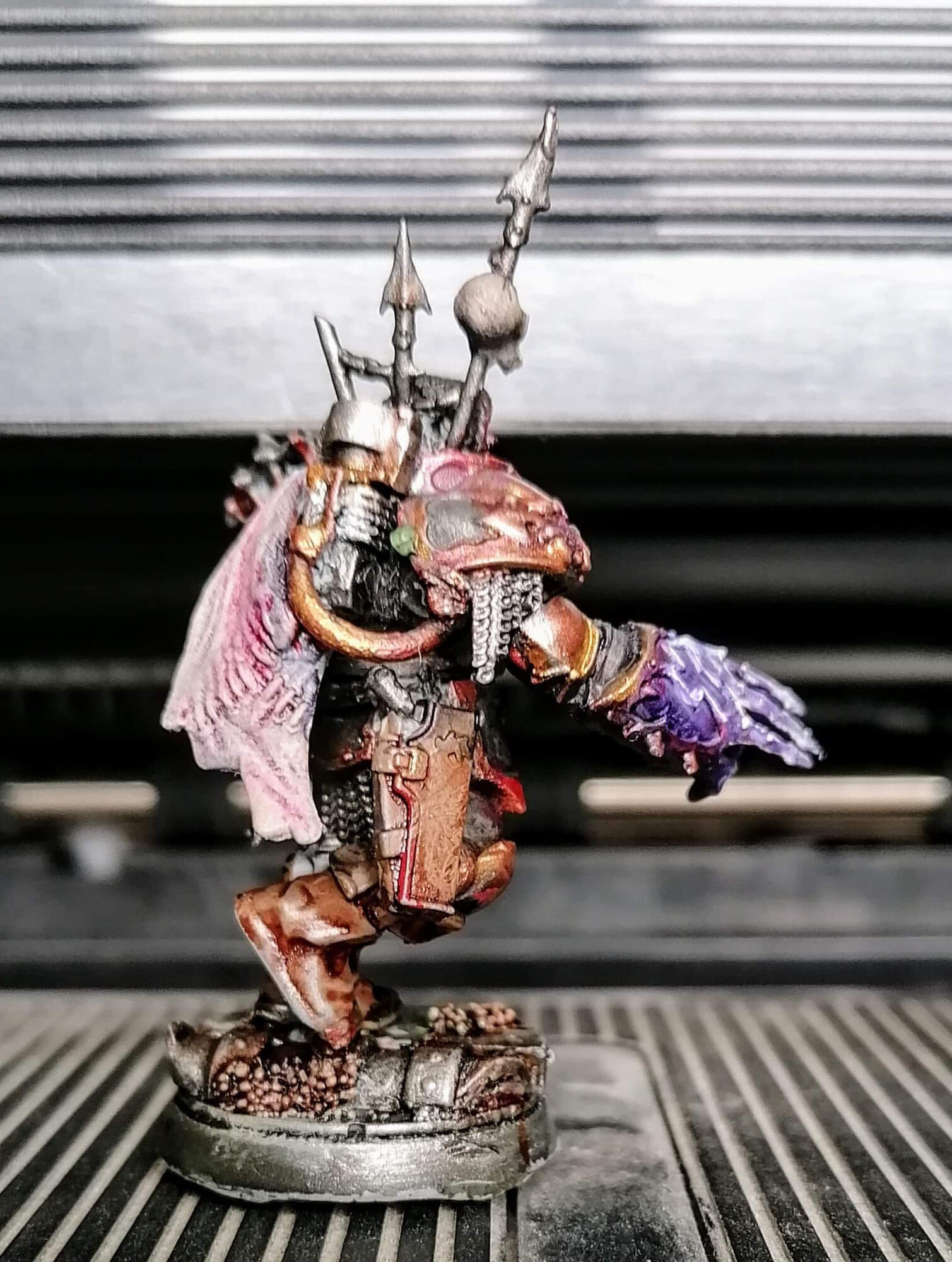 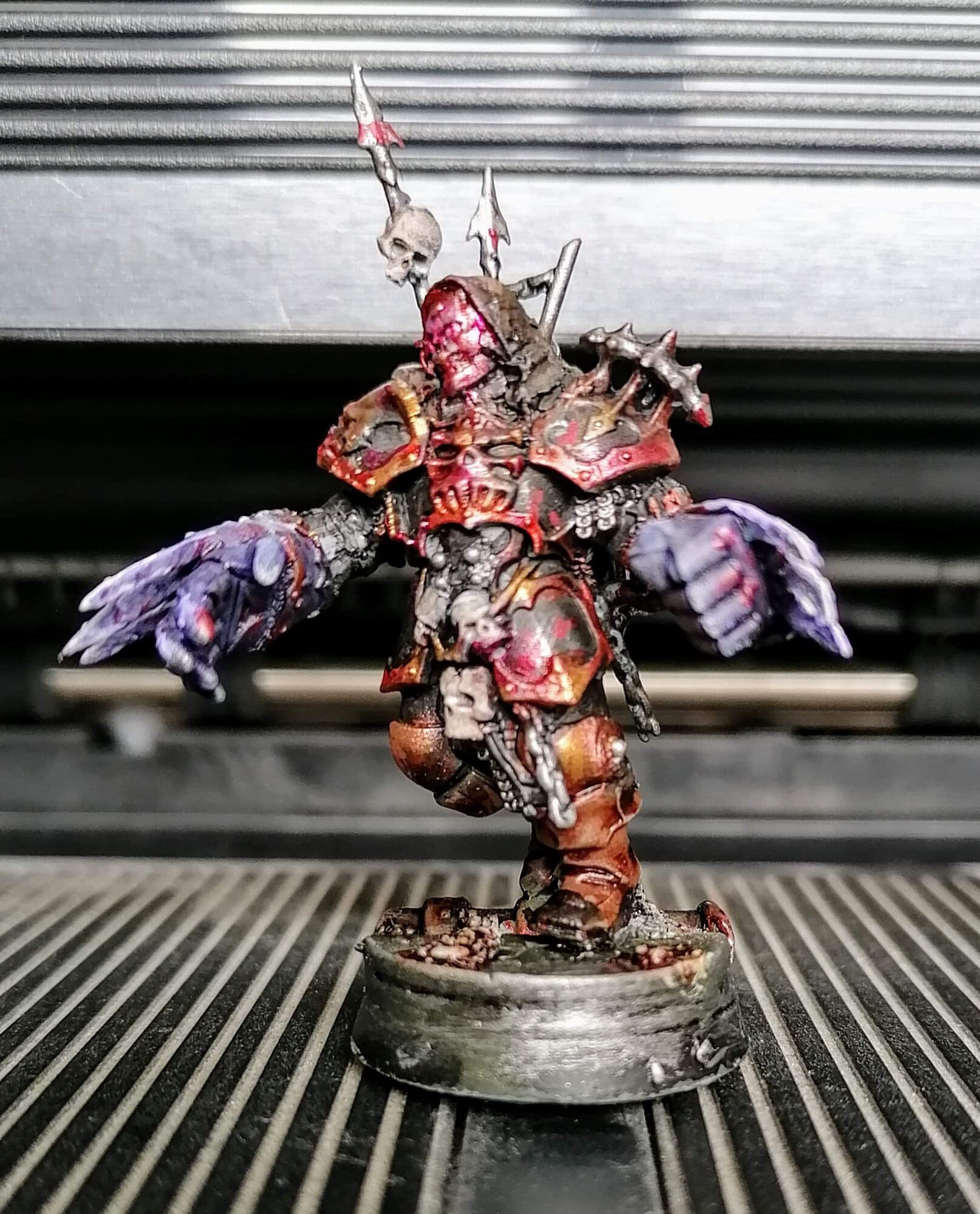 We have a ticket up for grabs number 25) @Galtarr Who sadly can’t make it due to the effects of the warp on time.

No reserves so sold to the first to show interest.

My flight has been cancelled due to the corona virus craze. So No trip for me, unfortunately. :/ Hopefully someone else can make good use of my ticket.
Reactions: Scavvierising, Ardavion, Stoof and 5 others

That is a real shame @Jaws. We are waiting day by day hoping the UK government does not declare a ban on all public gatherings and forces the venue to cancel, but it is a distinct possibility. We will try to reschedule for another date if that happens. It's all unknown at the moment, sadly.
Reactions: CaptainDangerous, Stoof and ClockworkOrange

undertaker said:
That is a real shame @Jaws. We are waiting day by day hoping the UK government does not declare a ban on all public gatherings and forces the venue to cancel, but it is a distinct possibility. We will try to reschedule for another date if that happens. It's all unknown at the moment, sadly.
Click to expand...

They've done this over here. Any arrangement with more than 50 people have to be cancelled. Most other social arrangements are closing, regardless. Bars are forced to close as well. Only places that sell food are allowed to be open, and only at about half capacity. To ensure that people don't have to have too much close proximity.
Reactions: Punktaku and undertaker

I'm happy with a re-schedule as I'm sure refunds would be problematic for you guys. I should probs avoid coming anyways during this "pandemic" as I'm immunocompromised, fml.
Reactions: undertaker

Yep, Adepticon has now been cancelled.

The Tribemeet Uk committee are closely monitoring the situation and we are currently still on. However there is a possibility that we will lose the deposit and balance paid for the venue, and the money paid in Kickstarter fees if we cancel. We’ve also bought stuff that we can at least use at future events, however it’s still taken up funds.

Therefore if the worst happens we will be unable to offer a full refund, but we will endeavour to return as much as possible. I doubt anyone will take issue with this, but peeps are peeps.

The committee invest a LOT of time and purchase their own tickets, and in many cases tickets for family members, so we will all also lose out. This is all run on a strictly not for profit basis.

What a shit position to be in.

Is it possible to rearrange for another date if need be? That would make more sense than to give everyone a partial refund.

Anyone who can't make the new date can get a refund and the tickets can be re-sold. I am sure ticket holders won't mind covering a few quid extra to cover any additional expense.

As much as I'd be gutted for it to be postponed, it would be even worse of it were postponed or cancelled a day or two before the event leaving people no time to cancel hotel and travel arrangements. I'm gutted for all the Scots who are currently in Cardiff with no rugby match to watch because it was cancelled at last minute.

Not sure if any folk are thinking of pulling out for whatever reason, but may be worth getting a gauge for that sooner rather than later?
Last edited: Mar 15, 2020
Reactions: Darian Shurville, Ardavion, Luke82 and 1 other person

My hotel reservation for the 28th-29th is non-refundable, so I'm preferring the current date and no cancellation, but I'm fine with moving to a later weekend (gives me more chance to finish minis) so I can get my gaming fix and justify the boat I'm building.

As long as we get plenty of warning about the new dates so hotel rooms can be booked, or camping arrangements can be made, I'd be happy.
Reactions: Tiny

The Committee are in regular contact via WhatsApp and the current consensus is that we go ahead with the event, we won’t be cancelling ourselves due to the direct financial implications already discussed and people having non refundable hotel accommodation.

That said there are many factors outside our control, we could be prevented from being there by the Government, the venue or things getting worse.

The event is going ahead!!! Woo hoo UK Yaks are a hardy bunch and we aren’t going to let a little thing like an international Pandemic stop us from playing with our toy soldiers!!

The venue has confirmed that they will not be cancelling unless the Government stops all public gatherings, further they believe that as we have an attendance of up to 50 people that we will not be affected should the Government impose such a ban.

That said we need you the hardy Yakker to adhere to the following rules;

The Upside Down Troll

Rightio.... I literally can't remember if I put my name in here, however of not, myself featuring some Goliaths and @ryanBSM with his VanSaar would enjoy an update on ticket availability!
Reactions: undertaker
Show hidden low quality content
You must log in or register to reply here.
Share:
Share Link
Top Bottom