I'm trawling for help building a tzeench chaos cult gang, as I cant settle on what to take both in terms of gangers and weaponry.

I have a box of Kairic acolytes to use as the basis for the miniatures and I have a barrel load of leftover weapons from other gangs...

I just can't settle on the feel of gang, thanks in advance for your advice. 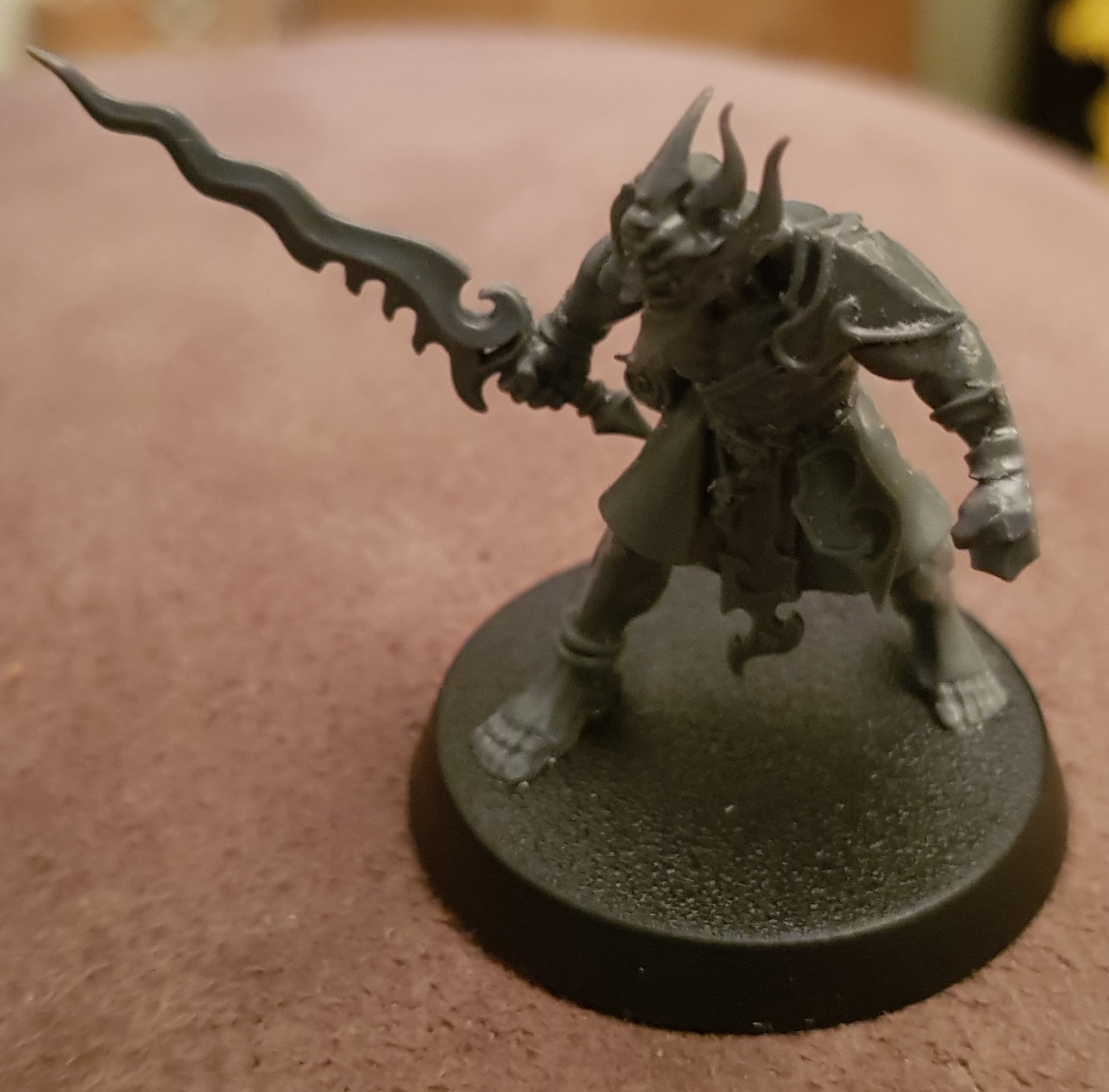 For the leader I'd suggest a support role with cheap load-out and Overseer, Mentor or Inspirational skill.
The champions will work best in a Ranged role, so I would suggest 1 champion with Overwatch and a decent gun (like a Long rifle to start with), while the second champ could go for Infiltration or Nerves of steel while armed with a Grenade launcher.
The Witch you can either take or leave (she isn't all that good to start with), but if you wanted to take her (due to the obvious Psycher theme of a Tzeench gang) I would suggest the Flamer psychic power (since it auto-hits targets and doesn't need to rely on the low 5+ Bs) and minimal extra equipment.
For the rest, you need at least 4 gangers (personally I would go for 5 gangers, 3 ranged and 2 melee focused). If you want ranged gangers I would suggest Lasguns for accuracy (later to be upgraded with Hotshot las-packs) or shotguns if you want a bit more ranged damage dealing. If you want melee gangers I would suggest either Swords or Flails + Stubguns and if you have leftover creds, give these some Smoke grenades.

After the first game or 2, you'll want to get Hotshot las-packs and Executione shotgun shells to improve your ranged gangers, Armored undersuits and Ablative overlays for your characters, Scrap shields for your melee gangers and some gun attachments for your champs (an Infrared sight for the Ovewatch sniper champ and possibly a Monosight and Smoke grenade ammo for the grenade launcher champ). Once you've upgraded the gear of your starting gang I would suggest saving up creds for additional champions with better guns (Nerves of steel or Infiltrate with a Bolgun+Telescopis sight and/or Las projector or even a Plasmagun or Webgun on Infiltrating champs, to create an small team of 2-3 infiltrators).

Hope that helps some
Reactions: PedroLoco, Howie, BearsWillEatYou and 3 others
2

Baffo pretty much hit the nail on the head. Devoting to Tzeentch also favours shooting so having a few autoguns might also be beneficial.

In terms of the feel, have you thought of a backstory for the gang? I find it helps me to arm them and come up with paint schemes etc. I found it hard with Helot Cults and the models I ended up converting fit in much more with a scavvie gang until I settled on using a mix of dark vengeance and Blackstone cultists, and came up with a story that fit with their look.

I love the Kairic Acolyte models and very much look forward to seeing what you come up with!

EDIT: I forgot to add that I take Dark Shield on my Witch as my Leader is combat focused with a Chain Glaive, so the bonus to armour save is really nice. I wasn't too keen on the other powers.
Last edited: Dec 10, 2019
Reactions: PedroLoco

I agree with @Baffo and @2_Minutes_Turkish.

- Chaos Familiars: you can have two of them max. They are one of the few real advantages that the Helot Cultists get. If you give one to your Witch it will help them cast psychic powers!
- If you are gonna go Tzeentch then you really ought to take a Witch. I think that the Scouring (the "Flamer Power") is a good power. Though it is poorly written and confusing. I much prefer, Assail. It has a long-range so that you can keep your Witch in cover and hopefully out of danger. And while I love to see my enemies running around on fire. I think that Assail is better, and you always have the chance to throw some fool off of a building. Also, if you want a Cult Icon the Witch might be a good candidate to have it. The Witch tends to stay in the back and could activate friendly snipers or other gang fighters. Also, many potential witch/sorcerer models have fancy staves which could be used to convert or just leave as is to represent an icon.
- The favor of Tzeentch lets you ignore all negative modifiers for one shot per turn. So why not maximize on that ability. Take a couple Long Rifles and get ready to snipe one unsuspecting fool in cover each turn. Also, the Heavy Stubber has a -1 to hit at long range, you could use Tzeentch's favor to ignore cover, to ignore it's long-range modifier, and to ignore any other environmental conditions. Then you could deliver two rapid fire dice worth of shots on a target that you needed to be eliminated.
- Lastly, DO perform the Dark Ritual after each of your games and DO randomly choose a gang member to be the focus of the ritual. If the ritual succeeds then the gang member who is the focus gets D6 experience points! If worse comes to worse, and you fail the ritual terribly then you get a Chaos Spawn!! Chaos Spawn won't win battles by themselves, but they are a great distraction (carnifex).

I also like the Kairic Acolytes, and would be happy to see you models as you complete them.
Reactions: PedroLoco, Howie, Martini Henrie and 5 others

Early days WiPs, just tacked into position ready for tidying up and additional detail to be added.

Posing isn't final as I might clip and repose some of the elbows. I've some long rifles to add, but they are going to need more than a the light reposing done on these. Also have a pair of spawn half done as well...concentration has been severely lacking, too many ways 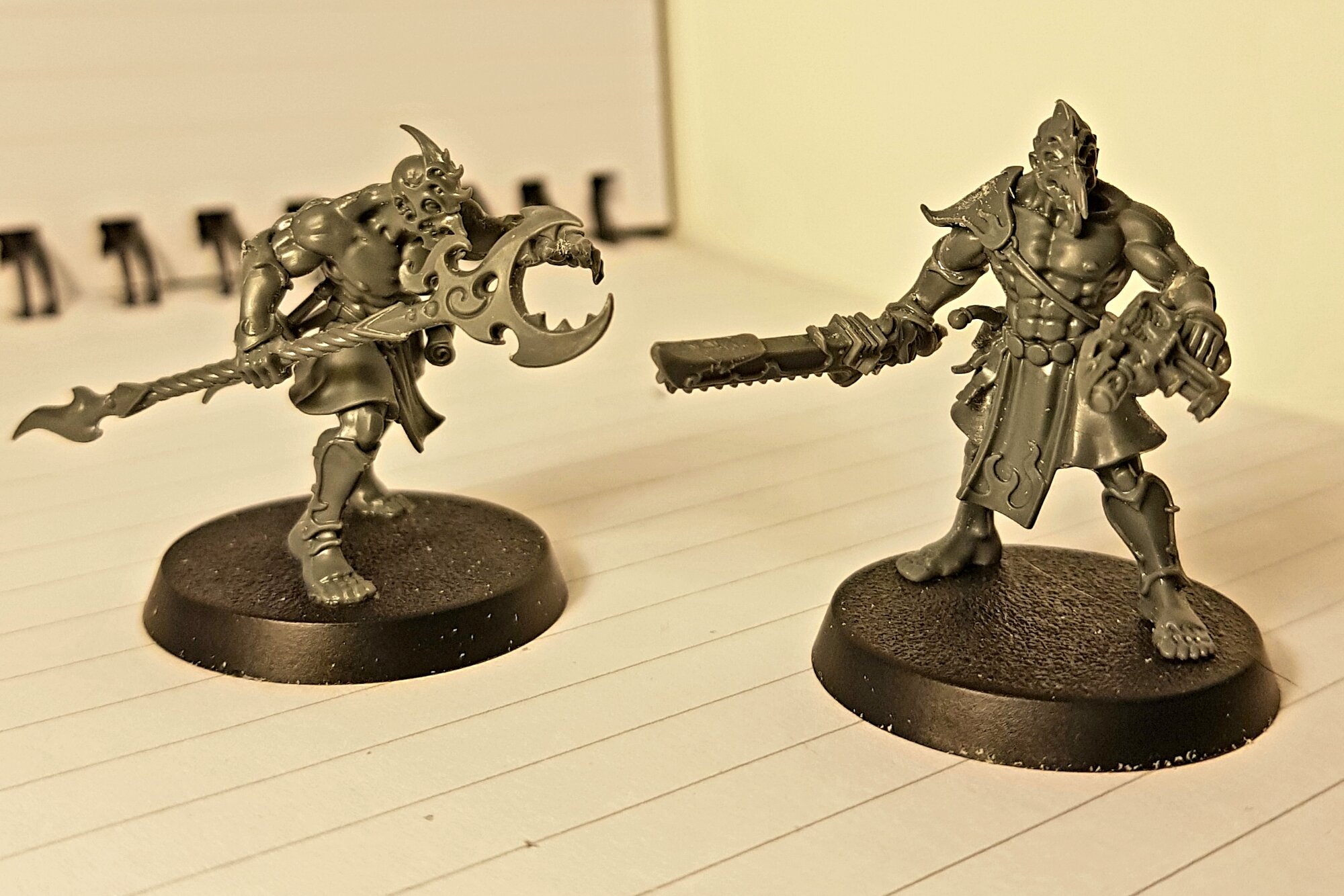 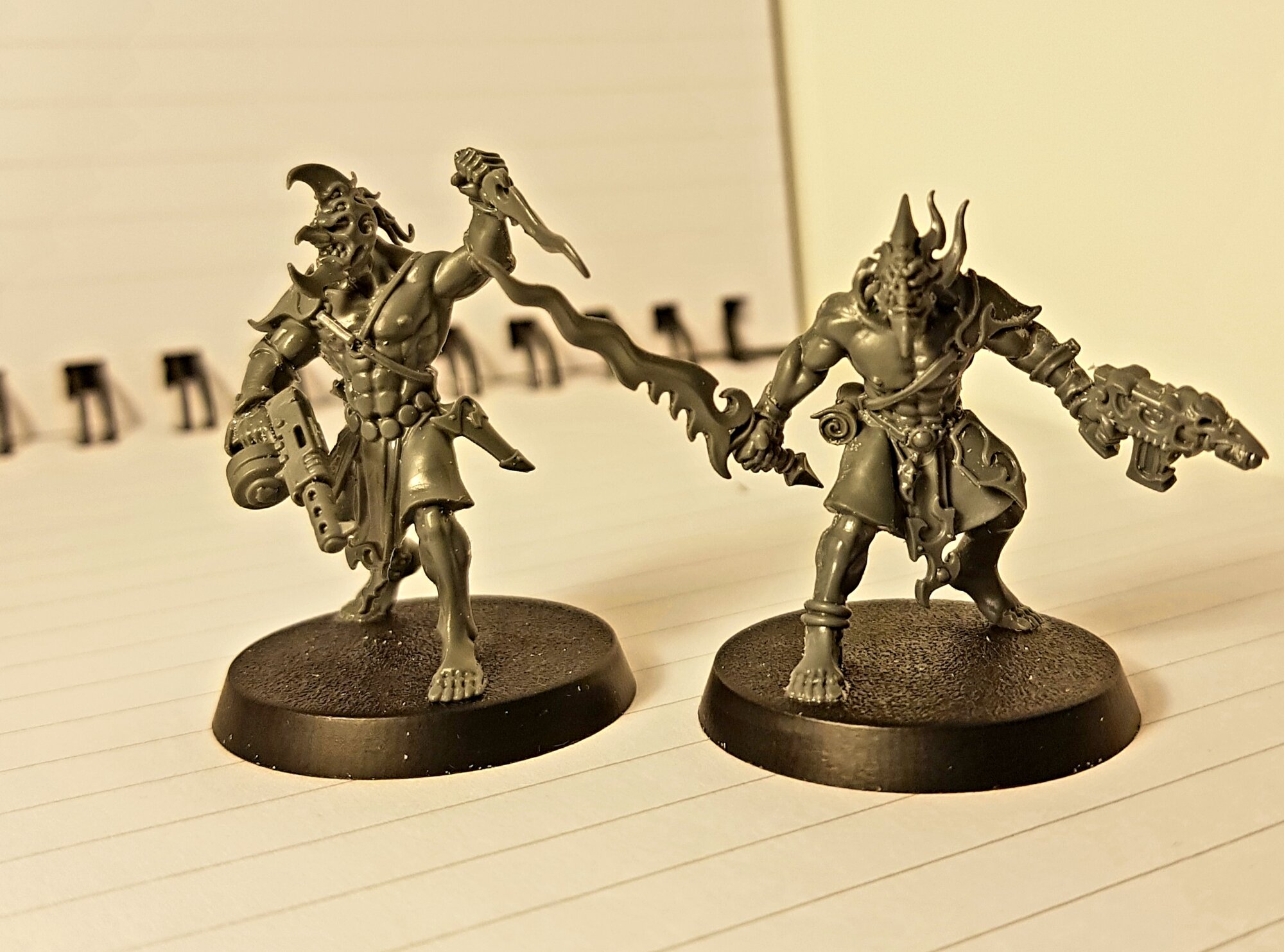 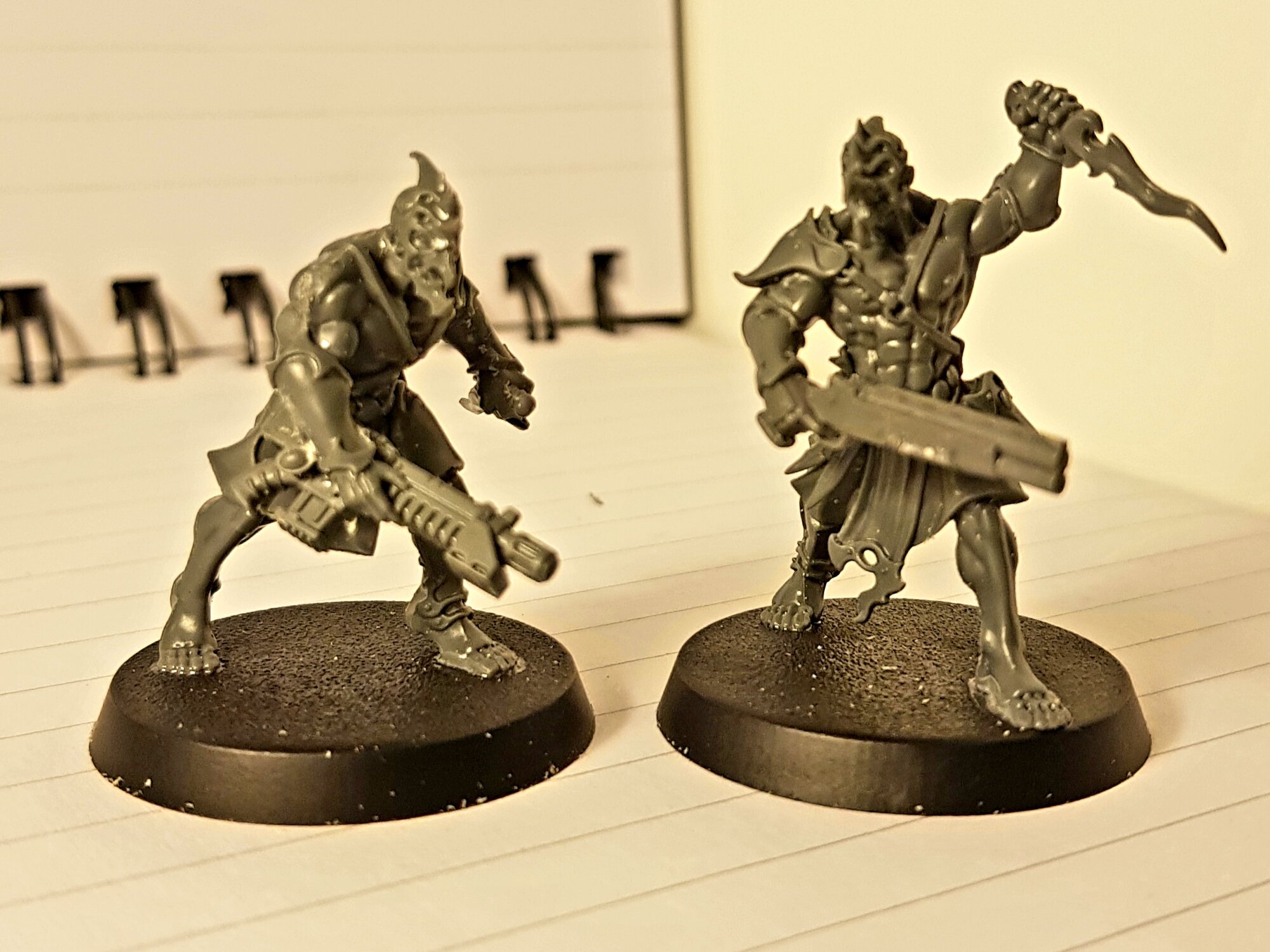 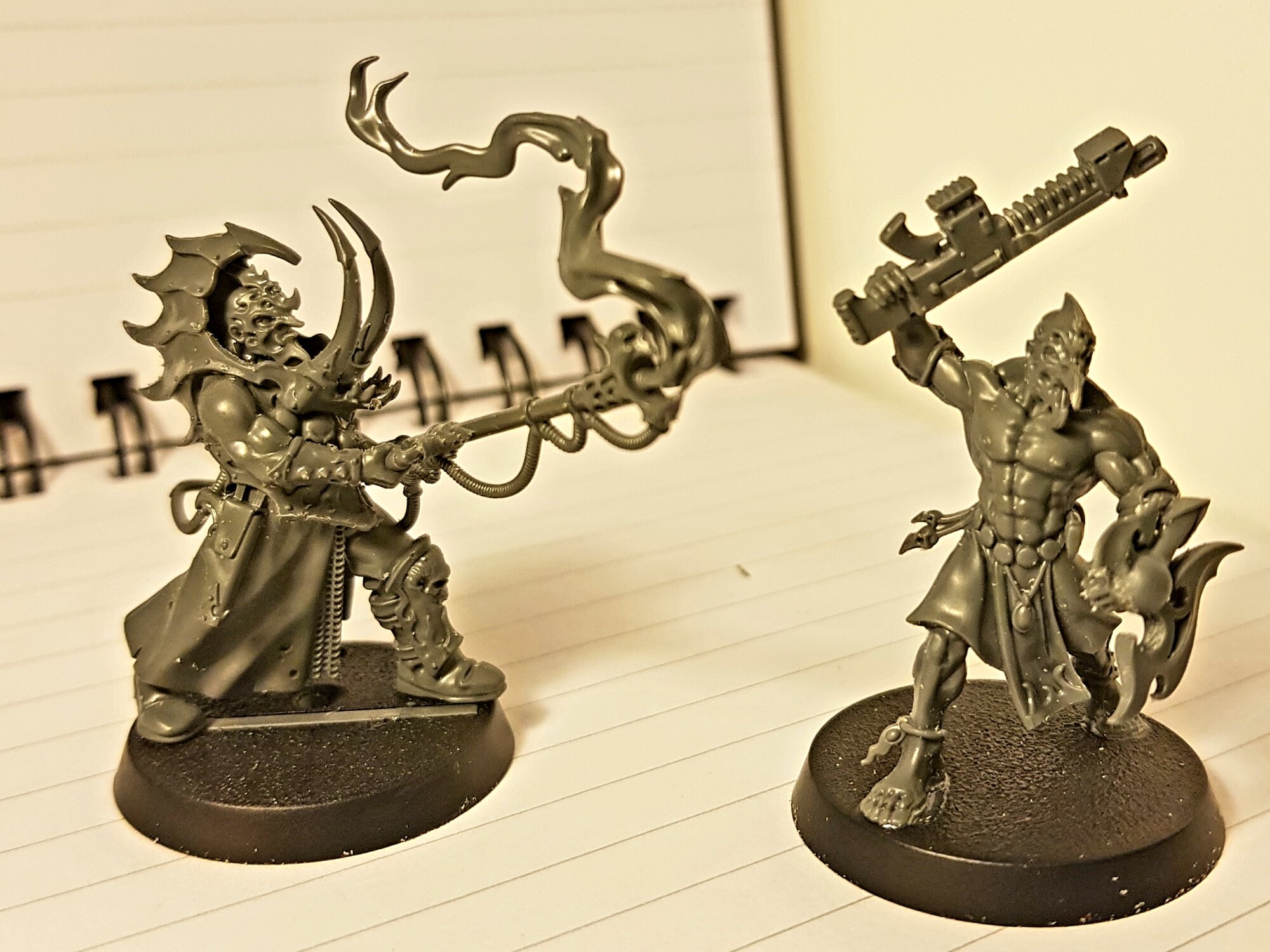 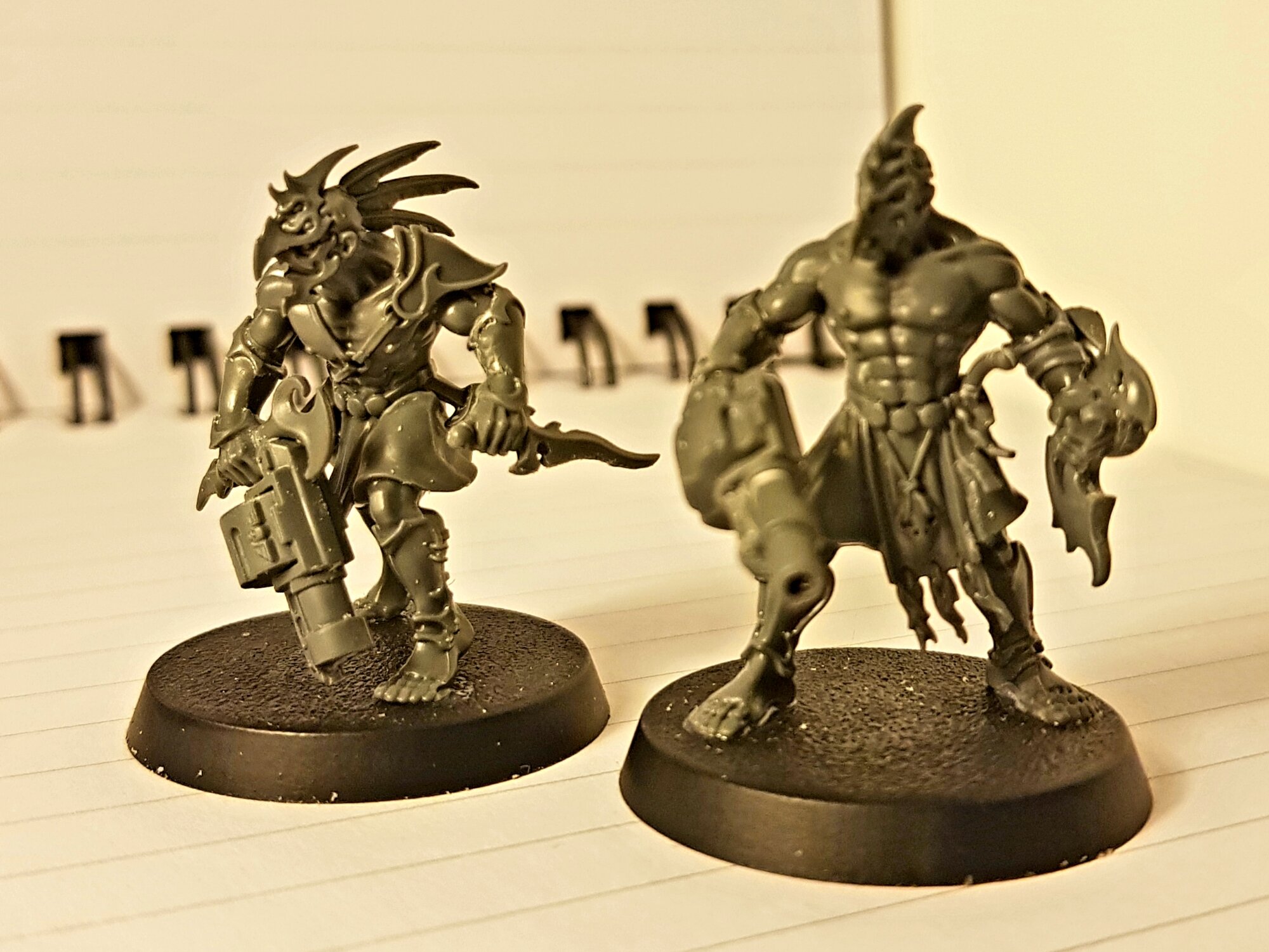 I love that guy that looks like he's about to smack someone with an autogun
Reactions: Martini Henrie
Show hidden low quality content
You must log in or register to reply here.
Share:
Link
Top Bottom