What I've been doing recently, a painting and modelling log...

So, I spent this afternoon making a start on a "monster" figure for Warhammer Quest, and taking stock of the parts I have for the Imperial Guard vehicle kitbash I'll be doing, more on that below the "monster" figure photos.

The "monster" figure in question is GW's Tomb Banshee. I've used Contrast paints for the red and the blue/green. I'm not too happy with it so far, the face is not very well detailed, I don't know if that's because of it's moulding or where I've possibly caked paint on it, and I've got red in places where it shouldn't be, I shall try to rectify that another time.

The splotchyness of the blue/green I don't mind, because, ghost, and some of that may disappear when I drybrush off-white highlights on, but overall the model just looks a little bit of a mess to me at the moment.

Photos, apologies for the blur - 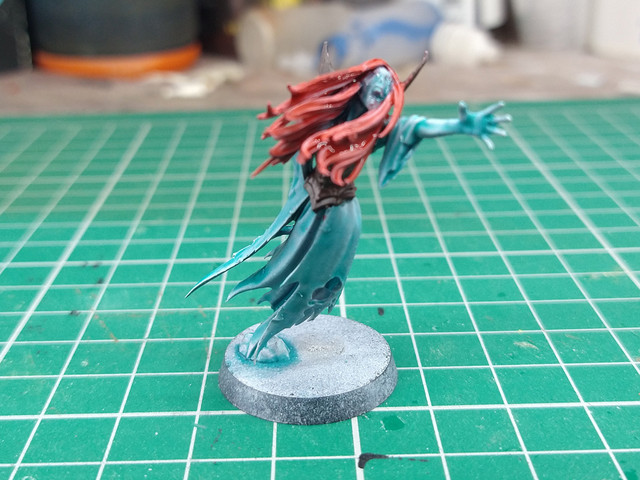 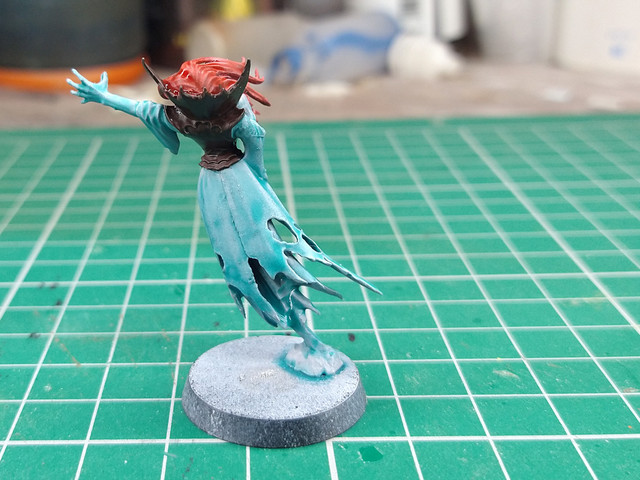 So, the Imperial Guard vehicle project...


Back in the mists of time GW had a magazine running called the Citadel Journal, and in two issues of that magazine there were examples and instructions of a kitbash for an APC, called the Centaur.

You can read the Citadel Journal issue with the instructions here, the previous issue, also readable on archive.org, had built examples - https://archive.org/details/CitadelJournalIssue10/Citadel Journal Issue16/page/n27/mode/2up


Anyhow, I'll be buying the new Kasrkin models (I was going to buy Tempestus Scions, but having seen the new Kasrkin they win hands down!), when GW release them as a separate box set, and I'll only be building 5 of them. They'll represent Inquisitorial Storm Troopers, and they'll need an appropriate transport.

So, I'm building a Centaur. Rules wise I guess it'd work like a Chimera but with half the transport capacity. But I'm unlikely to play a game with the Steel Legion/Inquisitorial/Grey Knights army, it's purely a wishlist army. 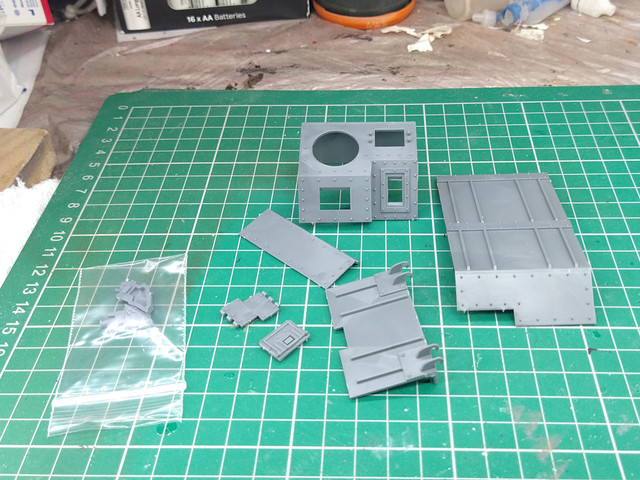 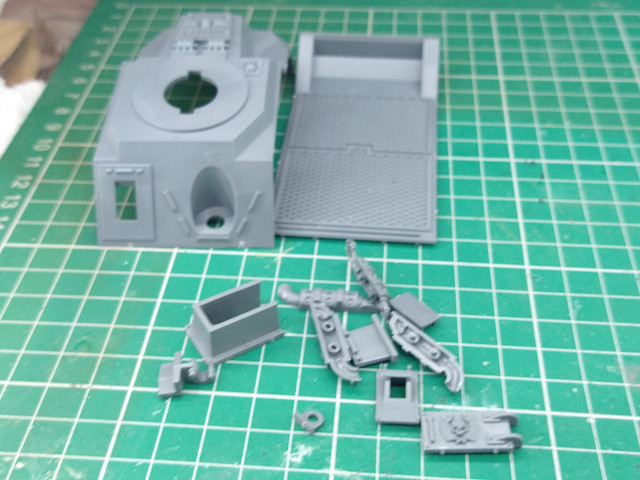 Alternate resin Chimera turret and resin track guards x2 (I bought 2 sets in case I balls up the first), I'm not sure who these are by but I bought them from an ebayer - 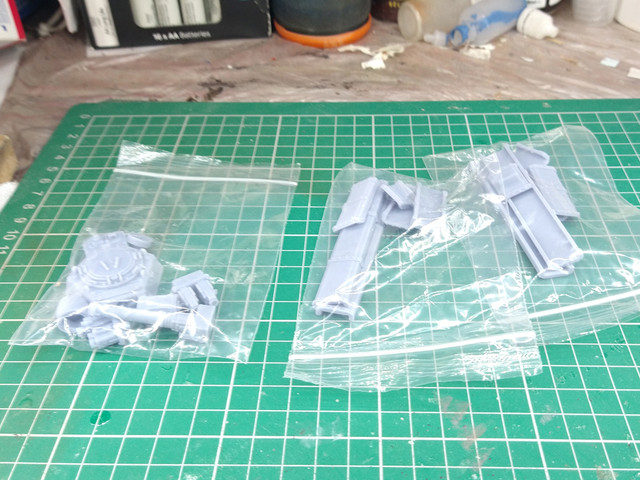 Chimera rear doors, these will form the side doors on the Centaur, I saw this idea by a guy whose Guard army was detailed in White Dwarf 318, way back in 2006 - 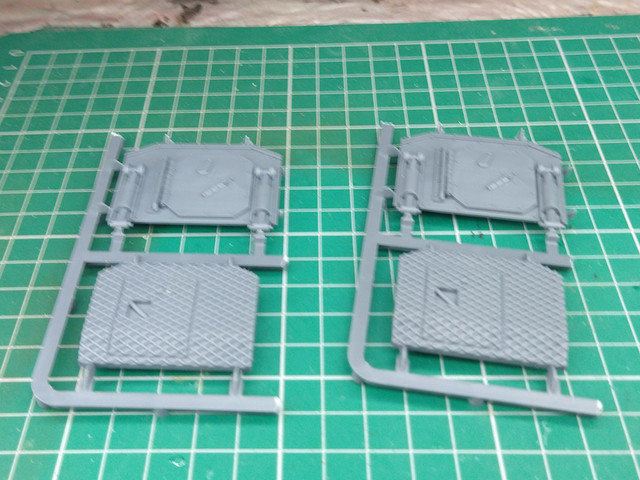 And because I needed wheels for this I bought a Zinge Industries Taurox conversion set, the Taurox is narrower than the Chimera/Leman Russ, so I'll have to do a little work to make them fit properly - 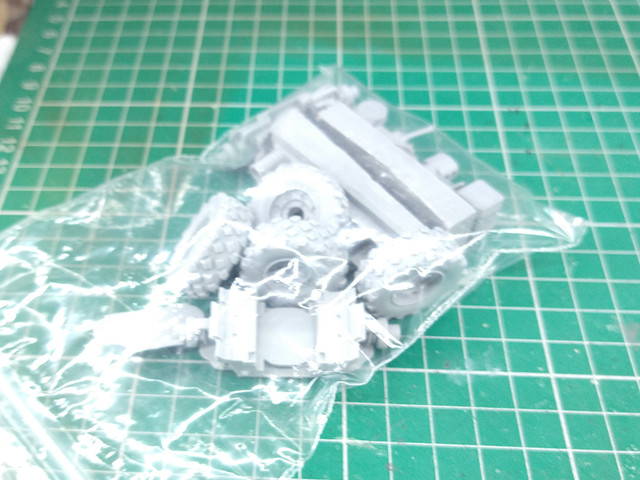 So, that's where I am with that, I'm itching to start it, but I'm waiting on some 2mm styrene sheet that I can make the side panels out of, and Royal Mail are having some industrial action issues at the moment so I suspect my styrene order has been caught up in that as I've not yet received the styrene. I want everything together before I make a start...

What blur? Everyone knows apparitions are hard to photograph.
Reactions: trollmeat, Raven Morpheus and Girl nation

A few of the models in that line are specifically like that. They're veiled brides, or something
Reactions: trollmeat and Raven Morpheus
R

So, Thursday last, and this evening, I did a few things...

The Tomb Banshee is pretty much done, just a varnish layer and the base to finish, but I'm waiting on green stuff curing on the base...

I also decided to carry on with the Chaos Terminator squad and finished 1 more. So that's two complete, which is one more than when I first attempted them some 15-20 years ago.


I haven't taken any final photos of those two yet though.


I have also been working on the Chimera/Leman Russ kitbash. Progress photos below - 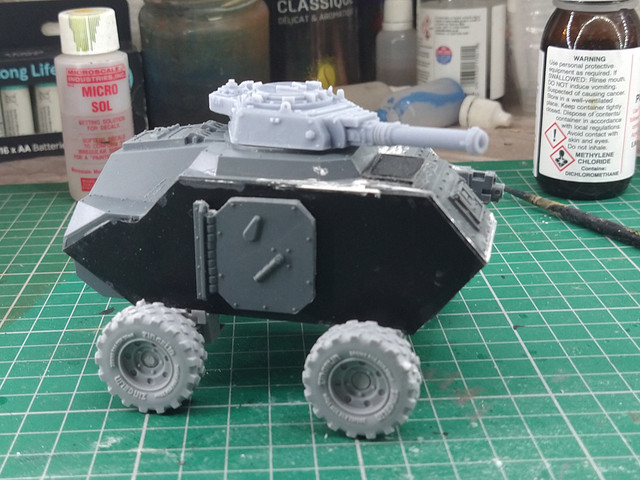 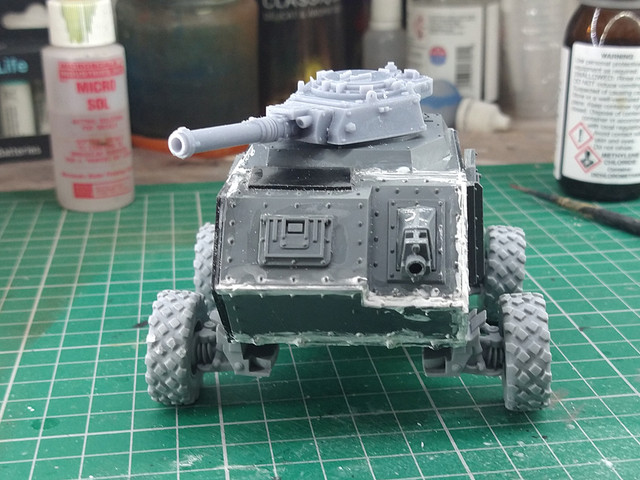 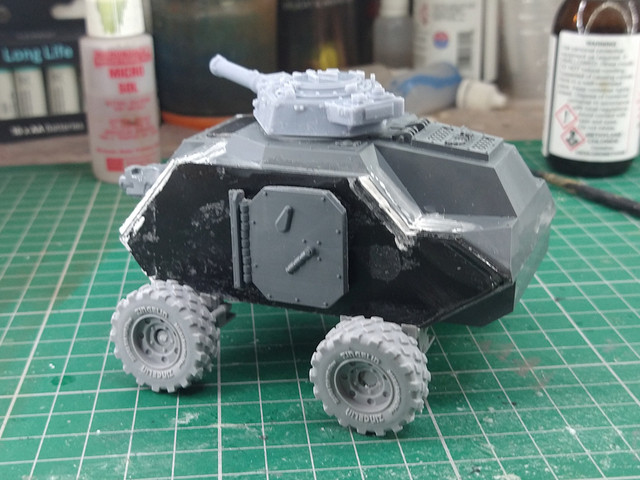 The doors are only white-tacked on, and the turret is just plonked on the top, I need to fabricate a way of securing it onto the hull (probably with magnets). The turret looks a little small to me, I may buy a proper Chimera turret...

Unfortunately as we can see the wheels are comically small on this and the hull rides too high on the axles (it'd ride even higher if I attached the axles properly). They look great on a Taurox, but not on this. Which is a shame because they look great otherwise.

So plan B. I have some resin 1/35 T17 Staghound armoured car wheels on order from an ebayer (it seems the Staghound in 1/35 is a similar size to this kitbash), they should, hopefully, work better. I'll stick a tube/rod between the pairs of wheels and glue them to the hull that way, even if I have to drill through the sidewalls.

Thanks as always for looking, C&C welcome.
Reactions: Ben_S
R

One of those restless nights so I decided to do more to the Centaur...

I glued the side hatches in place, hopefully they're in the right position for the wheels when I get them! I also put some of the Zinge Industries detail parts on - 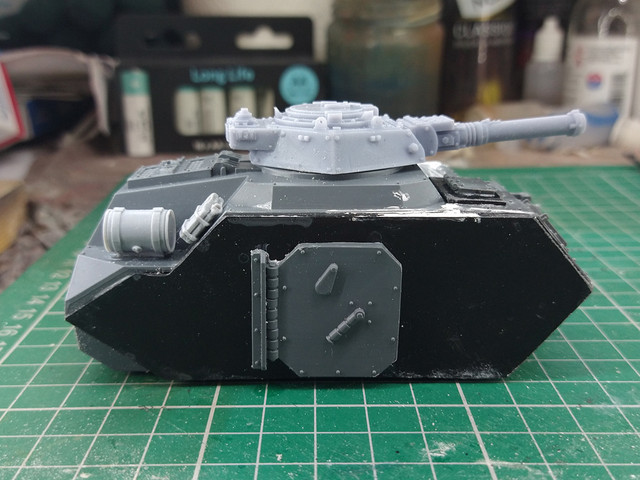 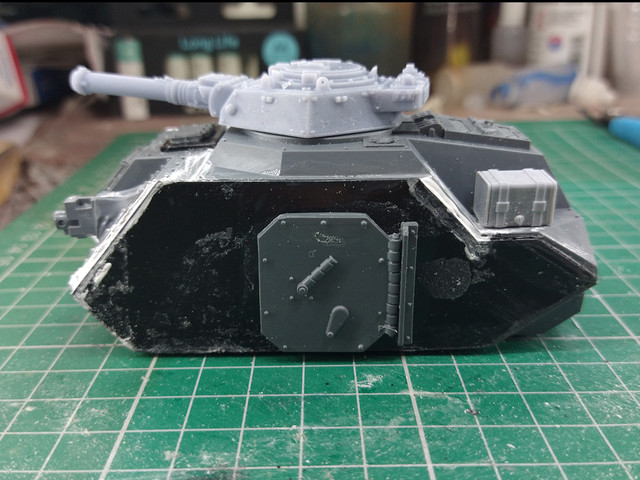 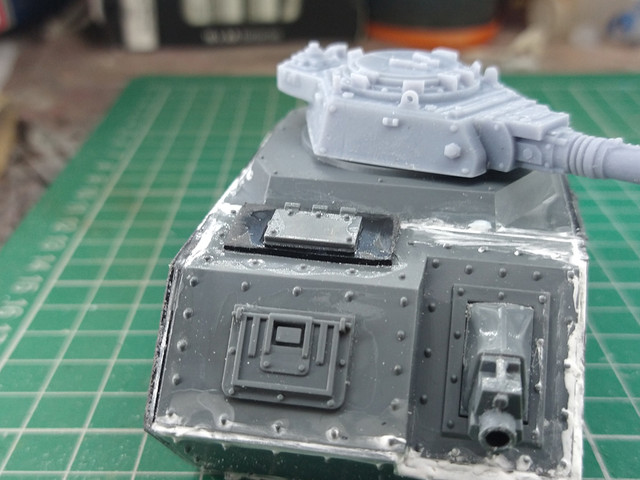 Magnetized in place the turret - 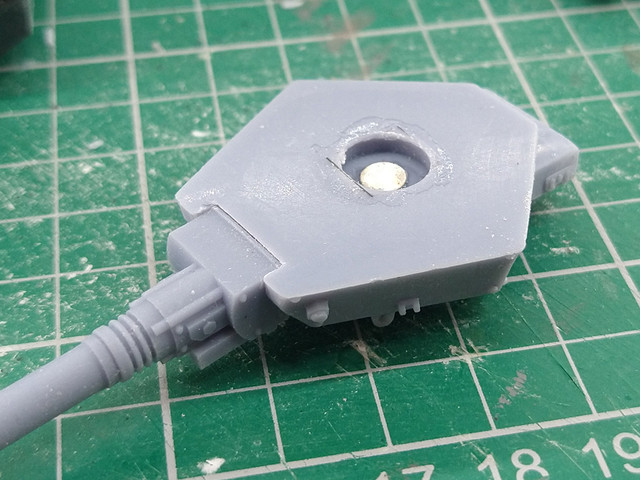 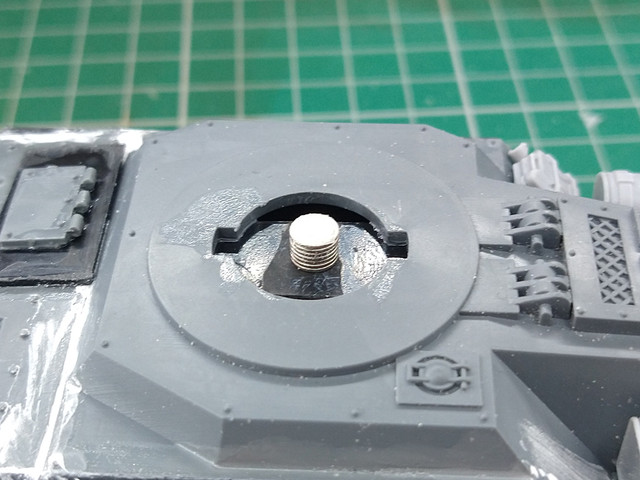 Not sure where to place the exhausts now though, I'll place those when I have the wheels on - 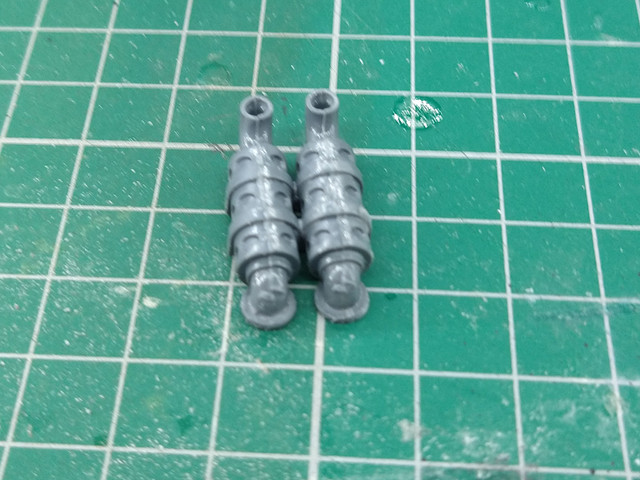 Thanks as always for looking, C&C welcome.
R

Back in September I bought some Battle Systems fantasy terrain, due to being unwell until recently I've only just now unboxed it...


I purchased one set of the village ruins, so after I had finished faffing with the Centaur (I'm waiting on the wheels so I can't do any more), I sat putting the village ruins together also tonight - 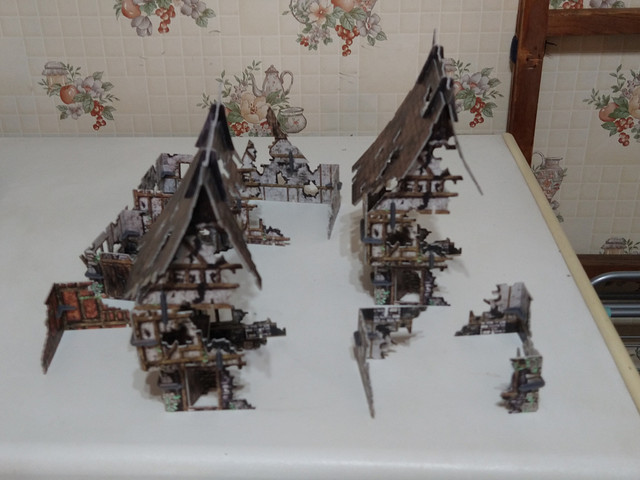 Close up of one of the 2 identical big buildings- 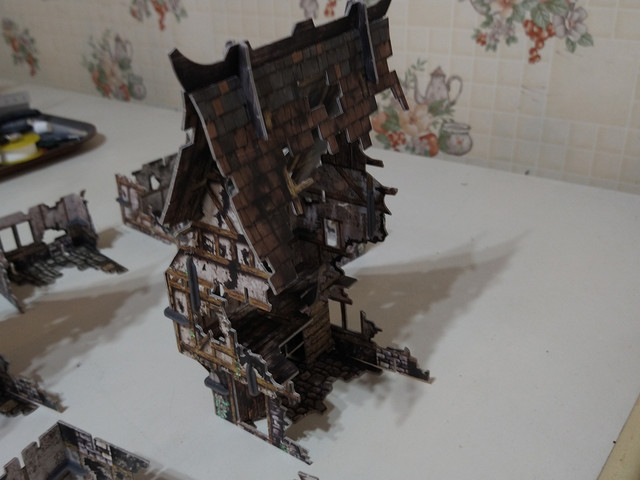 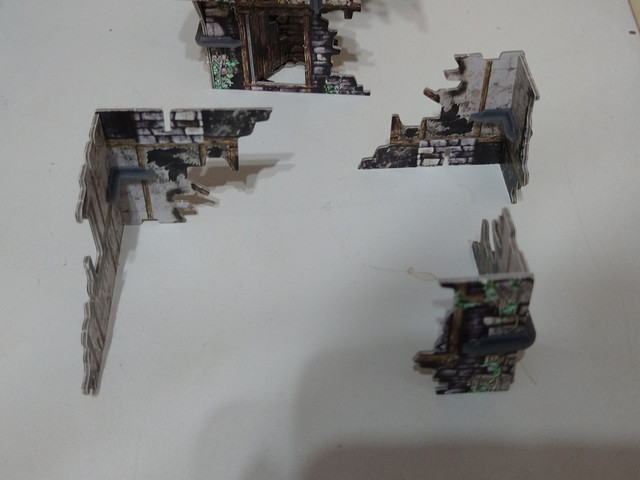 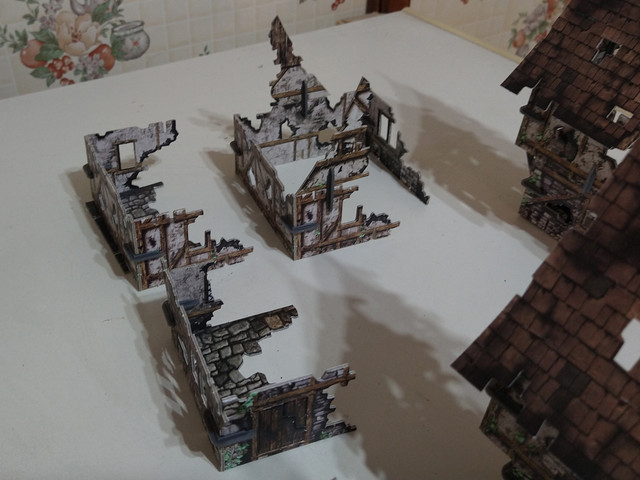 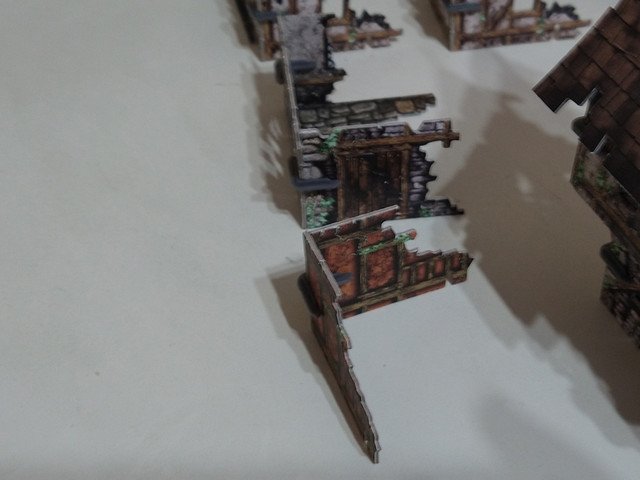 I left the walkways and ladders on the frets though, but there's at least 3 of each.


And I also bought a Wizards Tower, I didn't fancy putting it together tonight though, it's a bit more complex than the village ruins set - 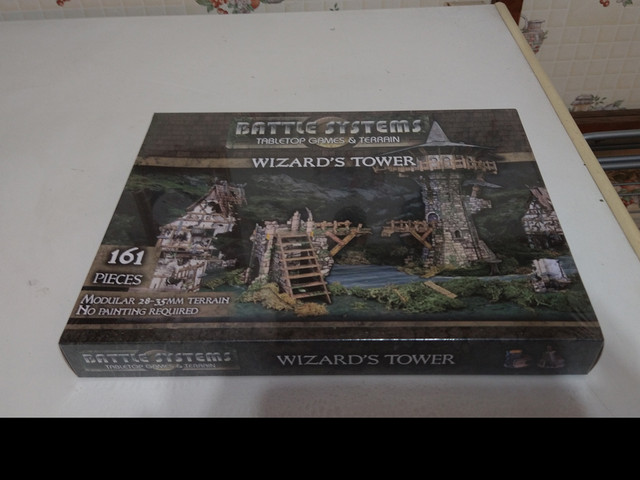 I didn't measure it but I think the village ruins can occupy about 18" square of terrain. With the single set of GW buildings I made earlier in the year, the table will start to look a bit more Mordheim. Just 3 or 4 more village ruins sets and I'll have a full 4x4 table!

Although it strikes me that the Battle Systems stuff has more of a Skyrim look than Mordheim...

Thanks as always for looking, C&C welcome.
Last edited: Yesterday at 4:53 AM
Reactions: Ben_S
B

Although I really like those wheels, your right that they dont do justice to your build, which is looking pretty sweet. No problem keep them for another build (perhaps a wasteland sand buggy).

Hopefully the new wheels will be more appropriate otherwise tracks would certainly suit.

Its looking good.
Reactions: Raven Morpheus
Show hidden low quality content
You must log in or register to reply here.