A few campaigns in with Goliaths and quite a lot of narrative has occured, this is a not so brief synopsis.

The Stimmer named Juice, of The Glorious Meatcakes, gained quite a reputation charging through multiple bomb rats and surviving melta blasts to the face. The dome was doomed by an invasion of daemonic creatures, but somehow Juice survived, going on to become the leader of a new gang he named after himself.

Juice’s Angels were a runaway gang, and Juice became the most hunted criminal of the campaign, but also the Saviour of Sanctions Corner.

In his pursuit of perfection Juice fell to Slaanesh, all the while believing that he was just the best thing in the Hive and sacrificing captives to himself. The end of the second campaign had Juice vanishing offworld, disappearing downhive, or ascending into daemonhood/attained apotheosis.

Third campaign running Goliaths had small cults popping up around the hive, calling themselves the Children of Juice. The gang I ran was lead by Pickles, who had a mutated chainarm. He ended up not doing a very good job of spreading the Truth of Juice to the people, and was demoted to a Forge Boss for the next campaign.

…so that brings us to now. In the pre-campaign battle Pickles won a free inload spike, gaining a skill (and there was no recovery time, but anyone who rolled 66 actually died from the pirated inloads - which actually happened to two players!), and at the start of the first battle he got another free skill from House Favours!

…….which made his death on the Doc’s table all the more entertaining. Especially since I had to sell gear to pay for the operation.

So, Pickles is dead, but I may petition the Campaign Tyrant for a Resurrection Package of some kind of daemonic possession if I manage to model & paint his new body up in time.

This campaign the CoJ are praying to Juice, sacrificing any and all they can in his name, but they are unaware that the entity they are worshiping is actually one of Nurgles minions, so his new form will look quite different to the one I made for Juice himself.
For a bit more about Juice’s Saga check out
the first post on page 2.

Yak40 entry: Upgrading Pickles, dead champion, in case a daemonic resurrection package is an option in the current campaign. 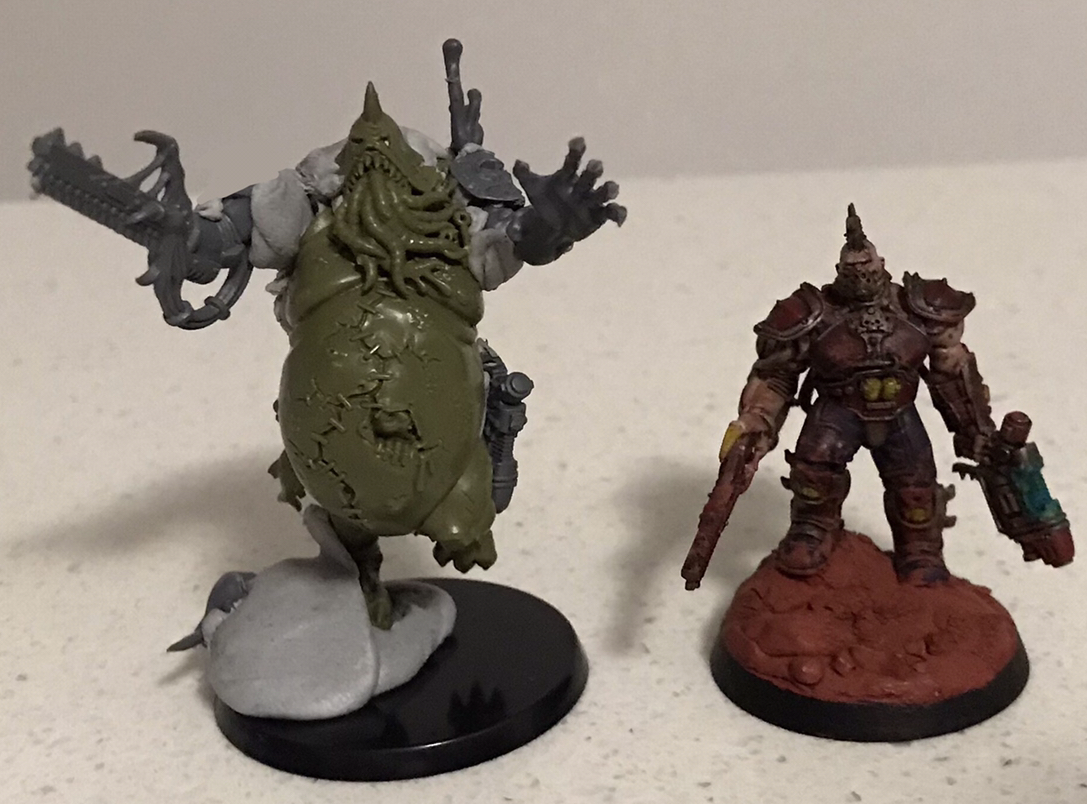 Every so often a strange Goliath wanders out of the wastes, proclaiming that they are the one true son or daughter of Juice. They offer strange secrets of Health and Strength and only ask for one thing in return: assistance in hunting down the false prophets of their kind, so that they may become the one true “Juice”.

All about Juice: Any gang may form an alliance with a Scion of Juice. All that matters is that they support one of the children of Juice as the true heir and leader of the Alliance.

Wisdom of Juice: While you are allied with a scion of Juice, gang members may opt to take a toughness upgrade instead of making a random roll. This option must be selected before the roll is made.

True son of Juice: During the pre-battle sequence, the gang may add a Scion of Juice to their gang. If the mission includes another Juice alliance or a Goliath gang, the Scion of Juice MUST be included.

Whenever a ganger rolls on the permanent injury chart, it must test for the possibility of mutation as if it has a mutation already. (P11 Book of Ruin) (Roll D6, +1 if already mutated, +1 if caused by a Daemon or possessed fighter, + if caused by Chaos cult, Corpse Grinder or Corrupted gang). The gang may choose not to do this, but must test the alliance every time it forgoes the roll.

Inspiring demonic resurrection conversion. I can imagine the Scion of Juice becoming a community tradition.

Witnesses reported the suspect bellowing "Beefcake!!!" as he methodically mauled the guards before hefting two huge barrels of Stareroyd's Premium Muscle Builder and lumbering his way down towards Upper Sumpton.
Reactions: CaptainDangerous, xutech, Stoof and 1 other person

Every so often a strange Goliath wanders out of the wastes, proclaiming that they are the one true son or daughter of Juice. They offer strange secrets of Health and Strength and only ask for one thing in return: assistance in hunting down the false prophets of their kind, so that they may become the one true “Juice”.
Click to expand...

Witnesses reported the suspect bellowing "Beefcake!!!" as he methodically mauled the guards before hefting two huge barrels of Stareroyd's Premium Muscle Builder and lumbering his way down towards Upper Sumpton.
Click to expand...

I’m hoping that we can garner community support, have Juice cults appearing across all of Necromunda, then perhaps he can truly attain apotheosis. 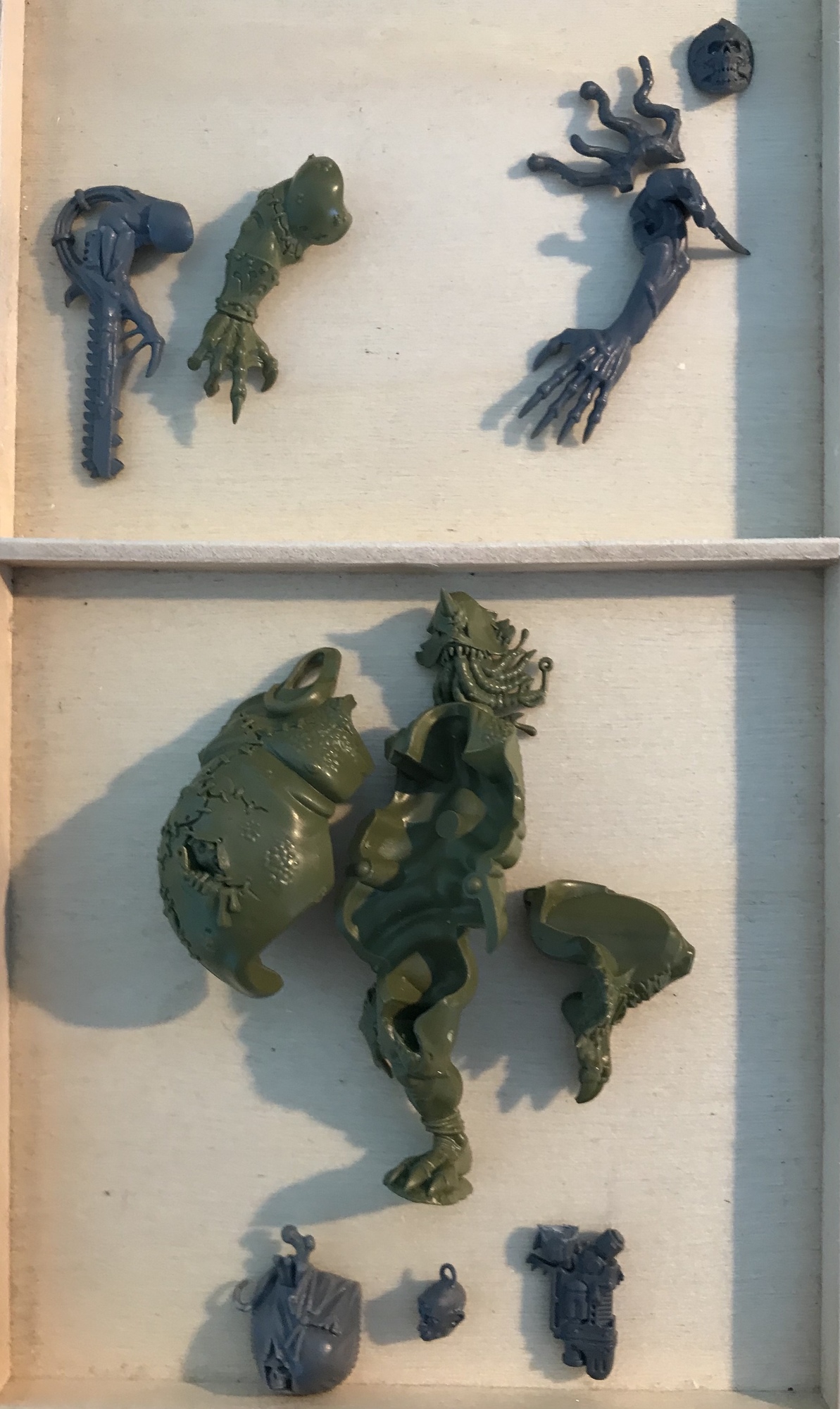 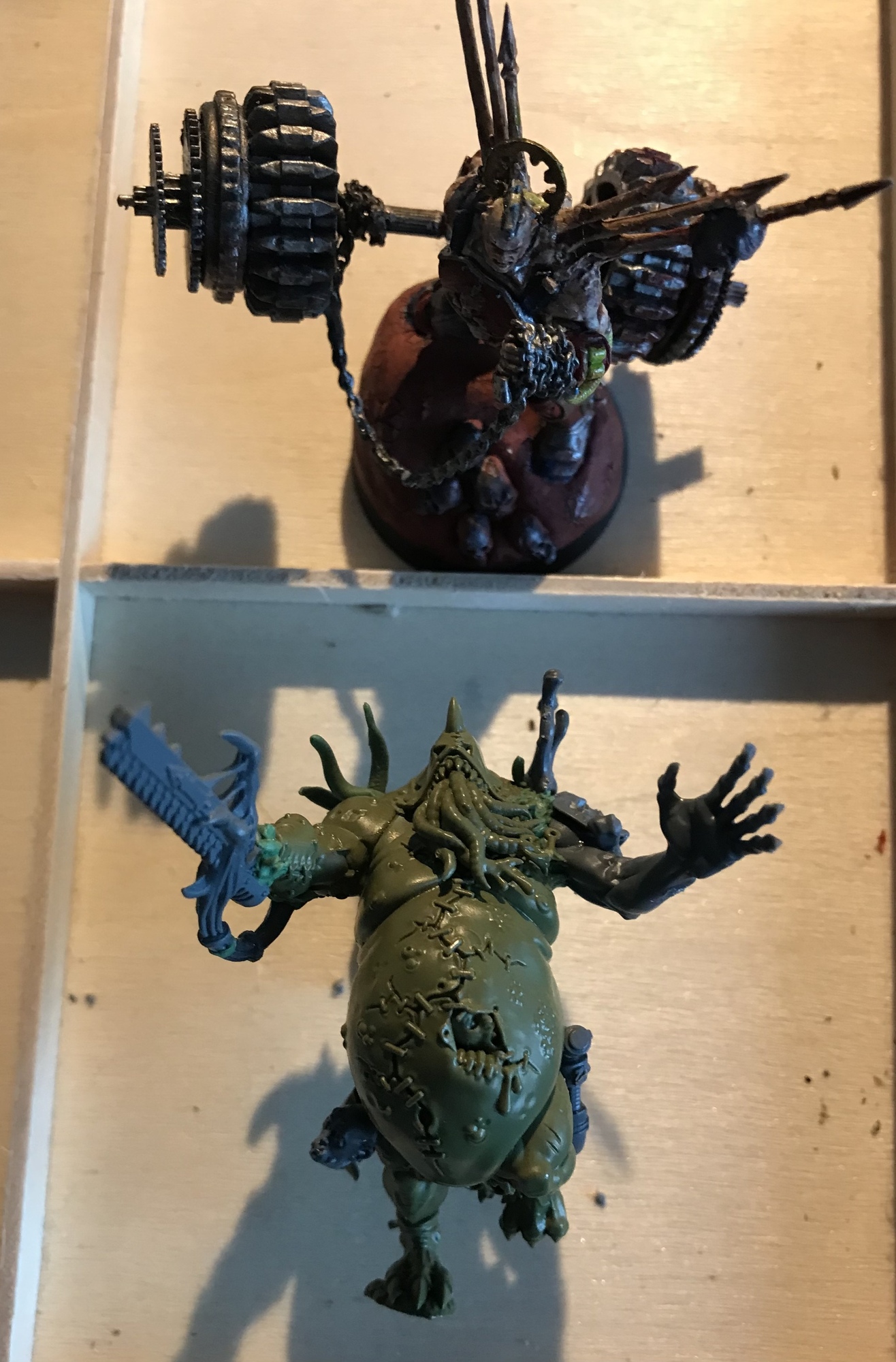 One of the Scions of Juice watches over the rebirth of Pickles.
Reactions: CaptainDangerous, Ben_S, Stoof and 4 others

He looks real... Juicy. I almost wanted to say 'best of luck!'

Good start! Dreading paint on him in the best of ways.

...and now I need to see a Juice social club errrr gymnasium terrain piece. That barbell is Full Metal righteous.

The Scion with Barbell I can imagine at an underhive version of Speaker's Corner, all sweaty, bellowing out the gospel of the curl and squat.

Pickles, on the other hand, is likely spewing a hard to understand but very earnest Nurgle version of the "So you're thinking of getting a gym membership?" sales pitch I've been through a couple of times. I'm very much looking forward to Pickles adventures. Please share some action photos and battle summations if/when you get them.
Reactions: trollmeat
X 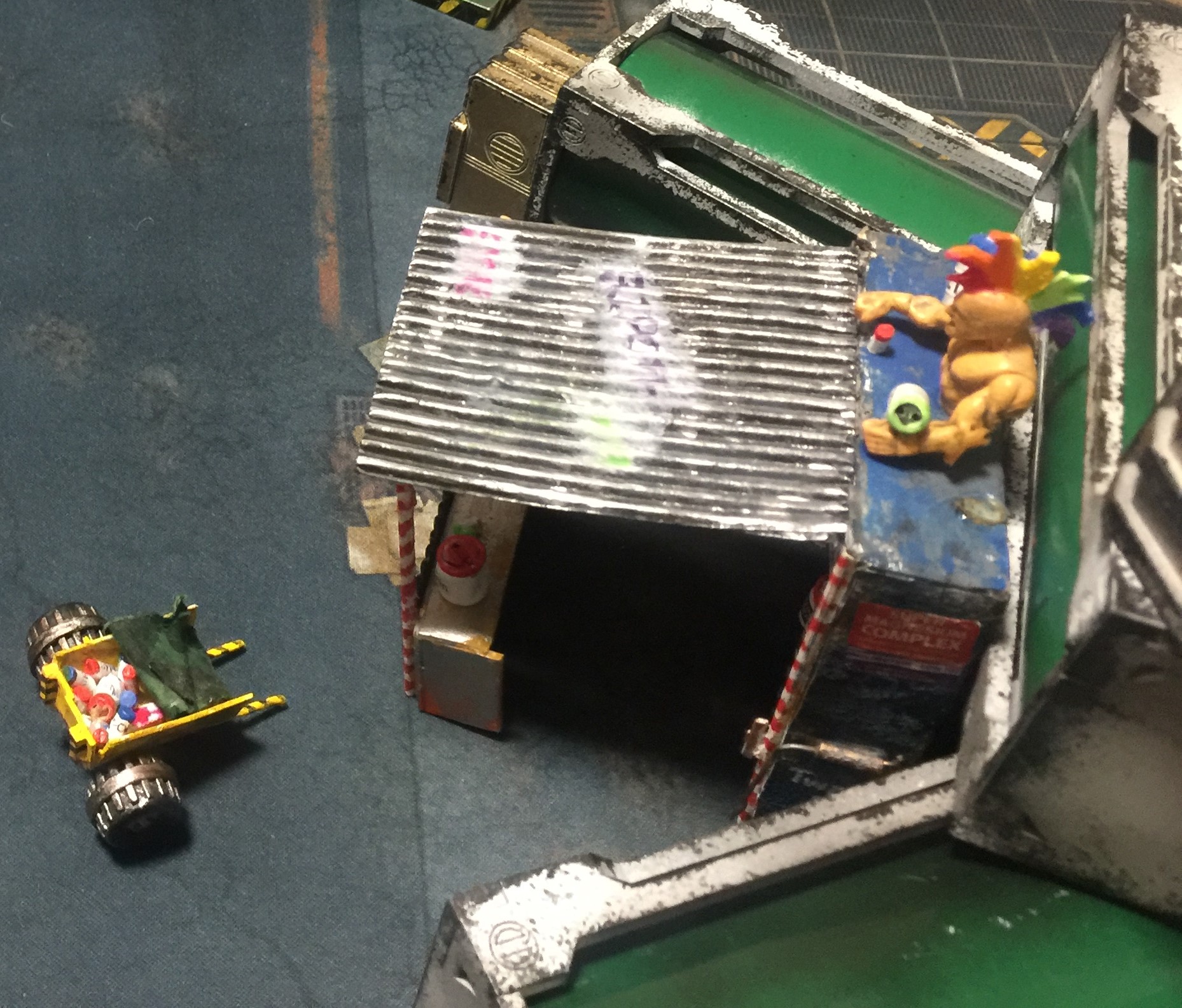 A sheen bird pict of a local Juice Hut....
Reactions: trollmeat and Pagumb

Might have to dig out the Juice Bar and the Gym 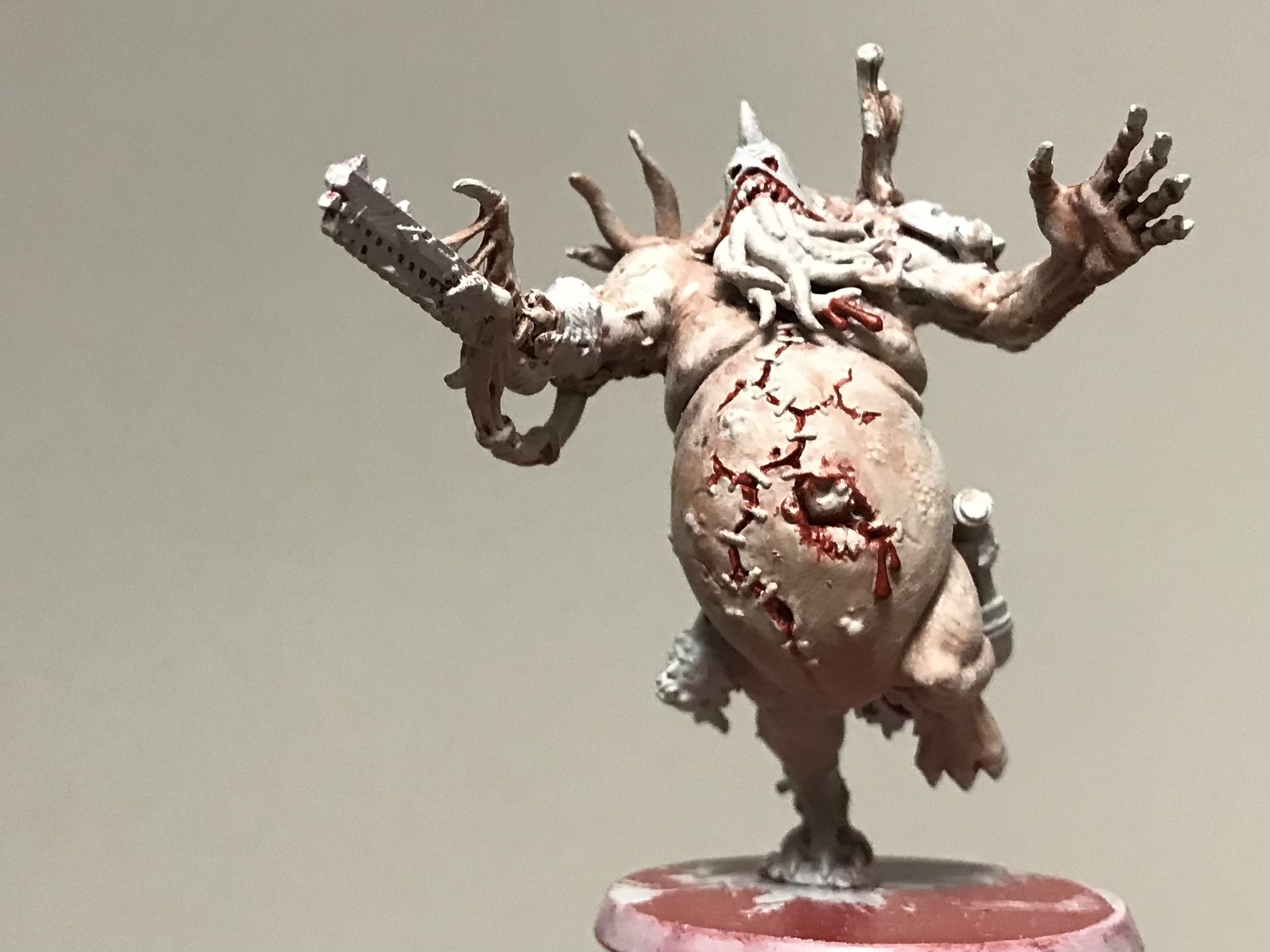 Had a moment of indecision, part way into painting - should the daemonic version of Pickles have the same hairdo as the original, or several additional spikes, or leave it as is? 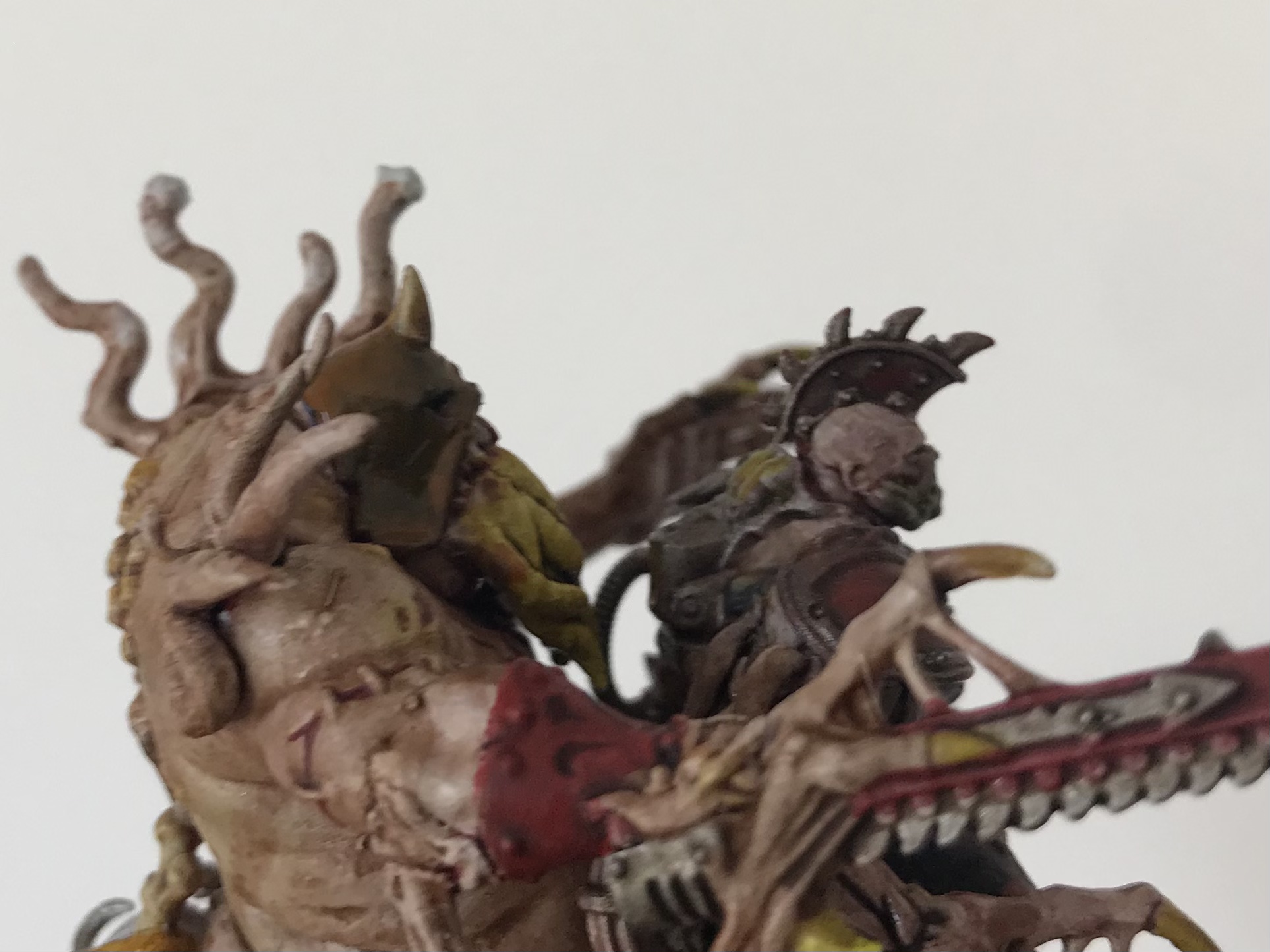 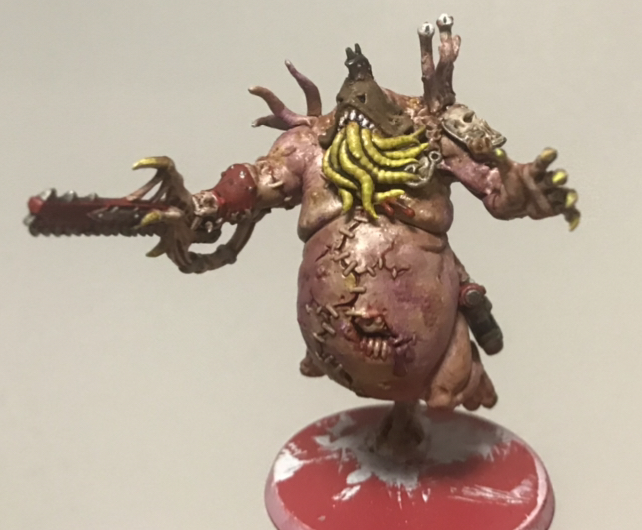 Next is figuring out if I make his face tentacles black and yellow stripes, and choose a colour for the fish 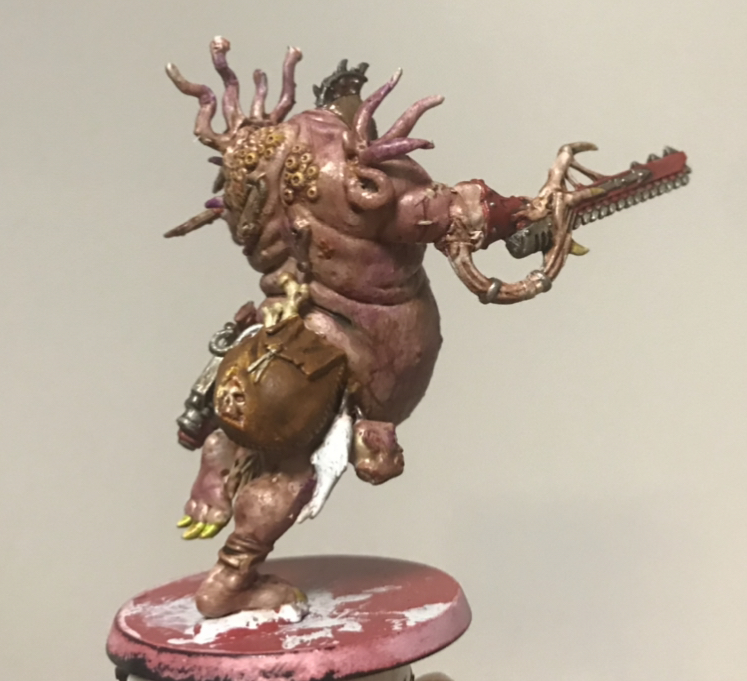 Same hairdo looks badass, it's cool having that common element to connect the two.
Reactions: Punktaku, Pagumb, xutech and 1 other person

If I have learned one thing from this project, it is that I have a lot more fun modelling and painting something when it is an actual character. 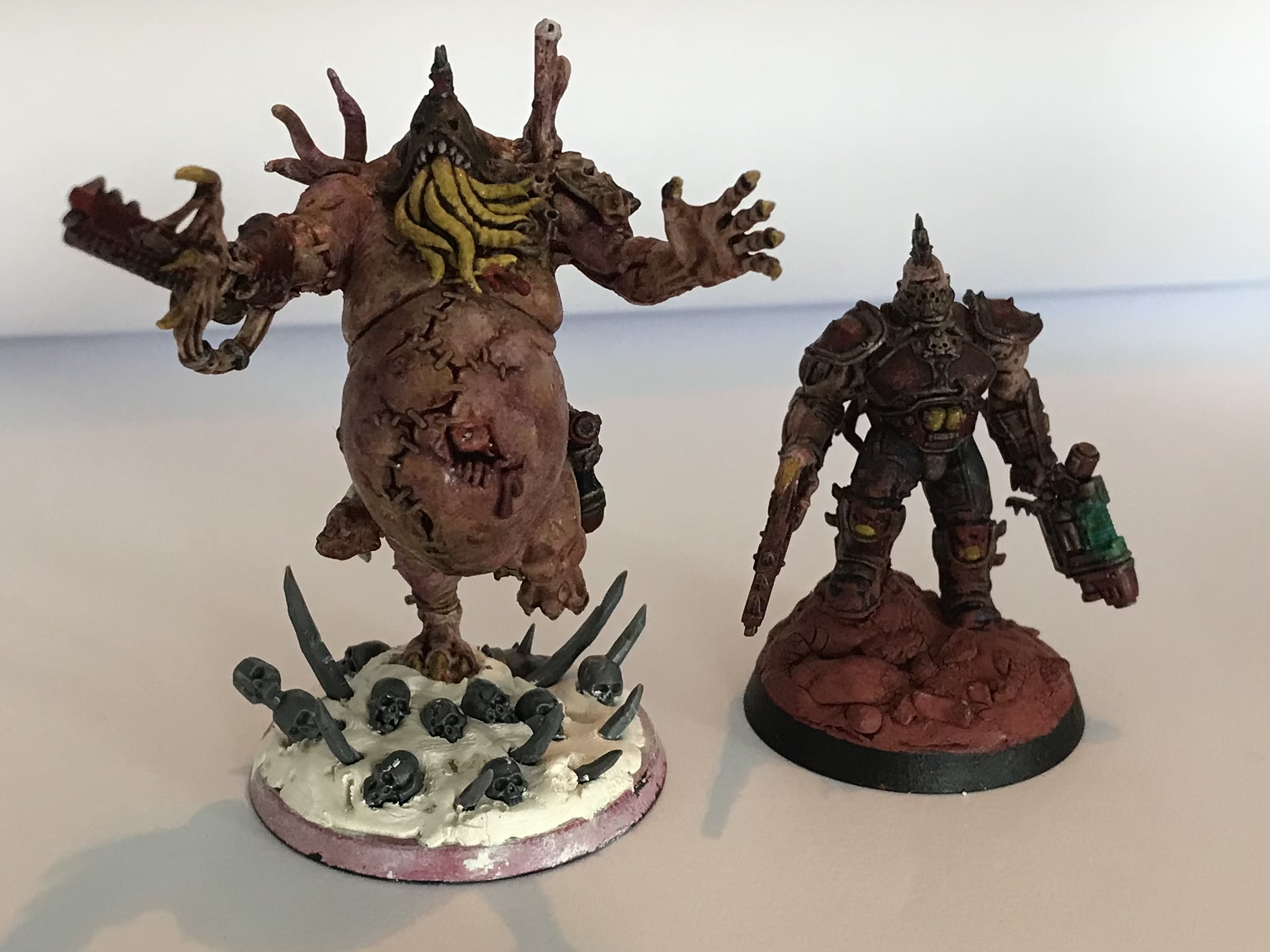 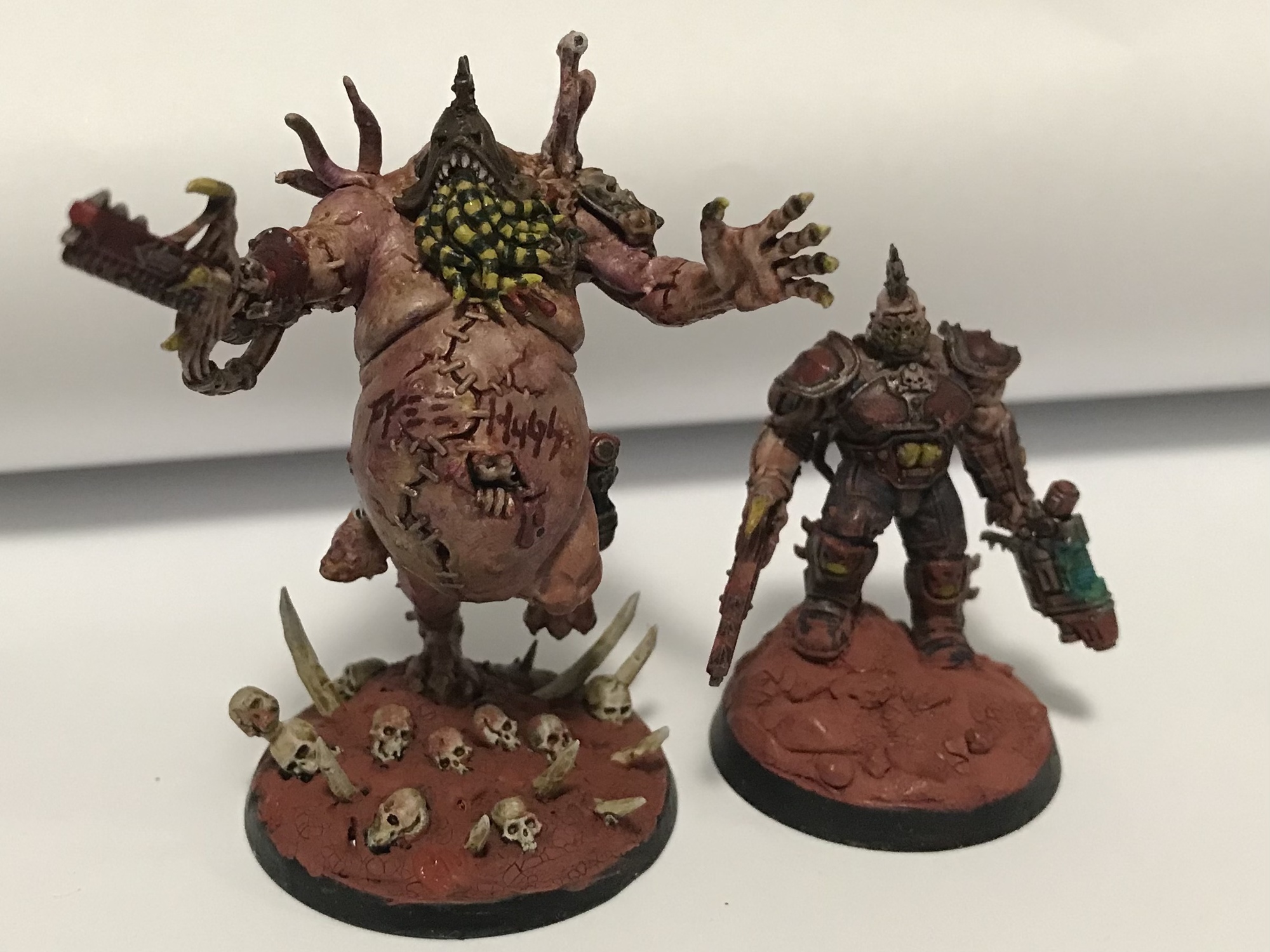 A few touch ups and Pickled will be reborn! 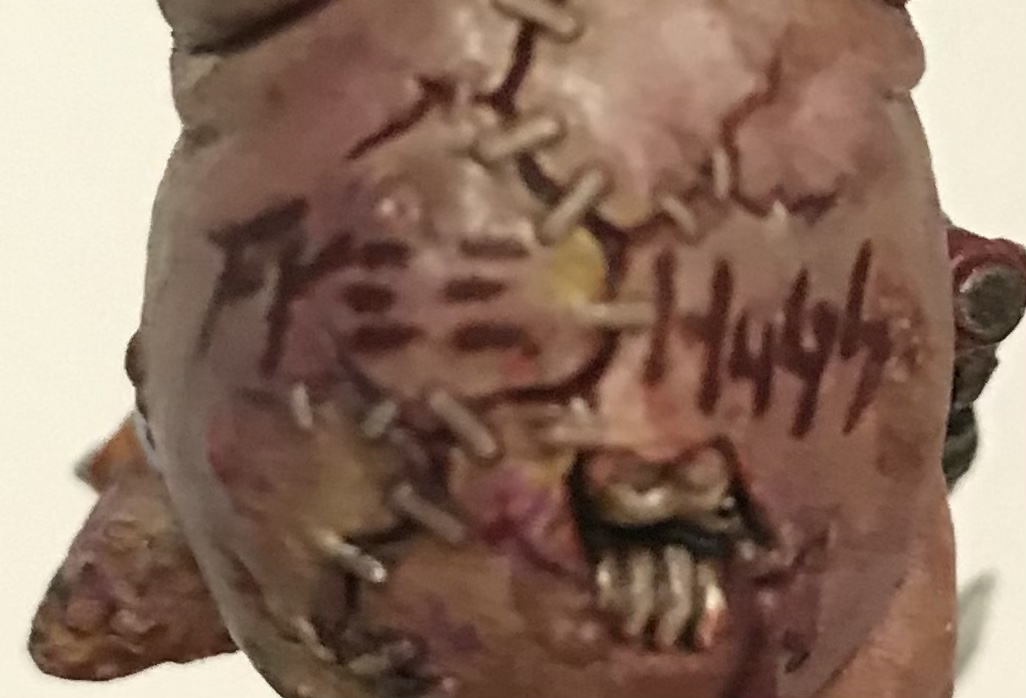 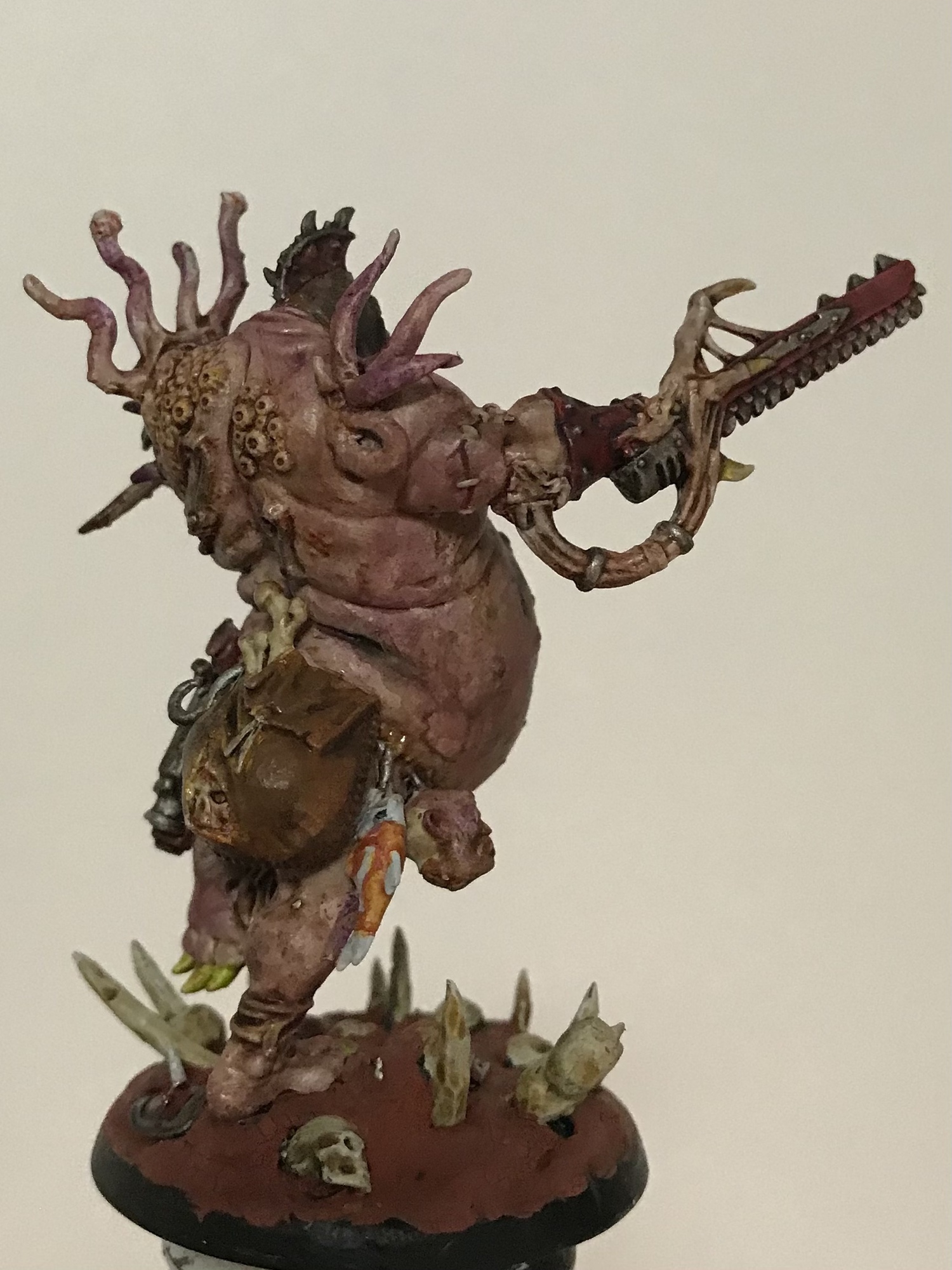 One of those expensive carp hooked on his hip - apparently they are still a thing in the grim dark future. 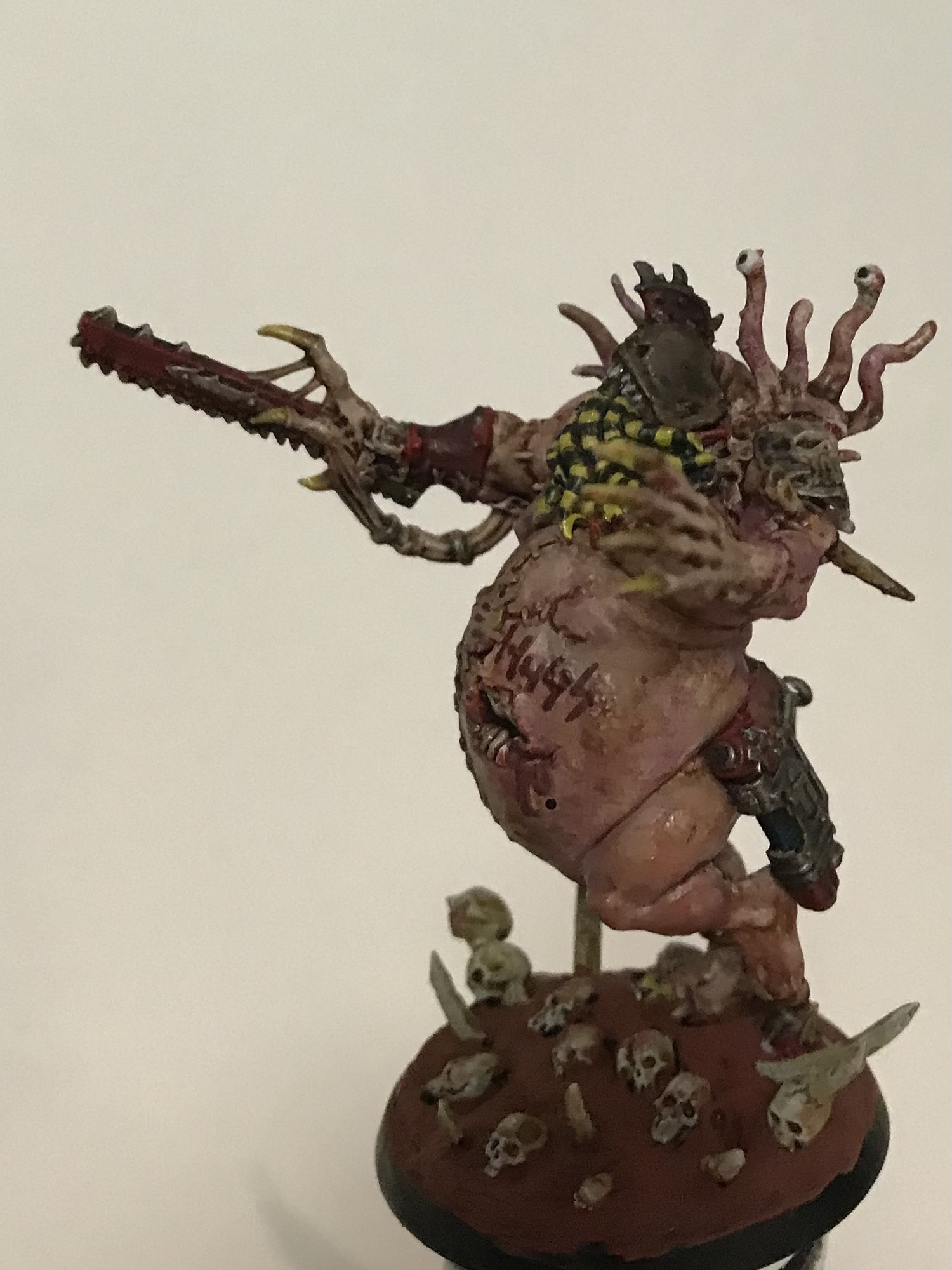 Combi plama-stub for when people don’t want to come into Hugging range.
Reactions: CaptainDangerous, Howie, Stoof and 5 others
P

Pickles has so much love to give. The plasma-stub is obviously to slow down those out of hug range long enough to get into hug range.
Reactions: trollmeat

Pretty much finished Pickles Reborn, but I might need to highlight the “Free Hugs” graffiti/carving on his belly a bit more. 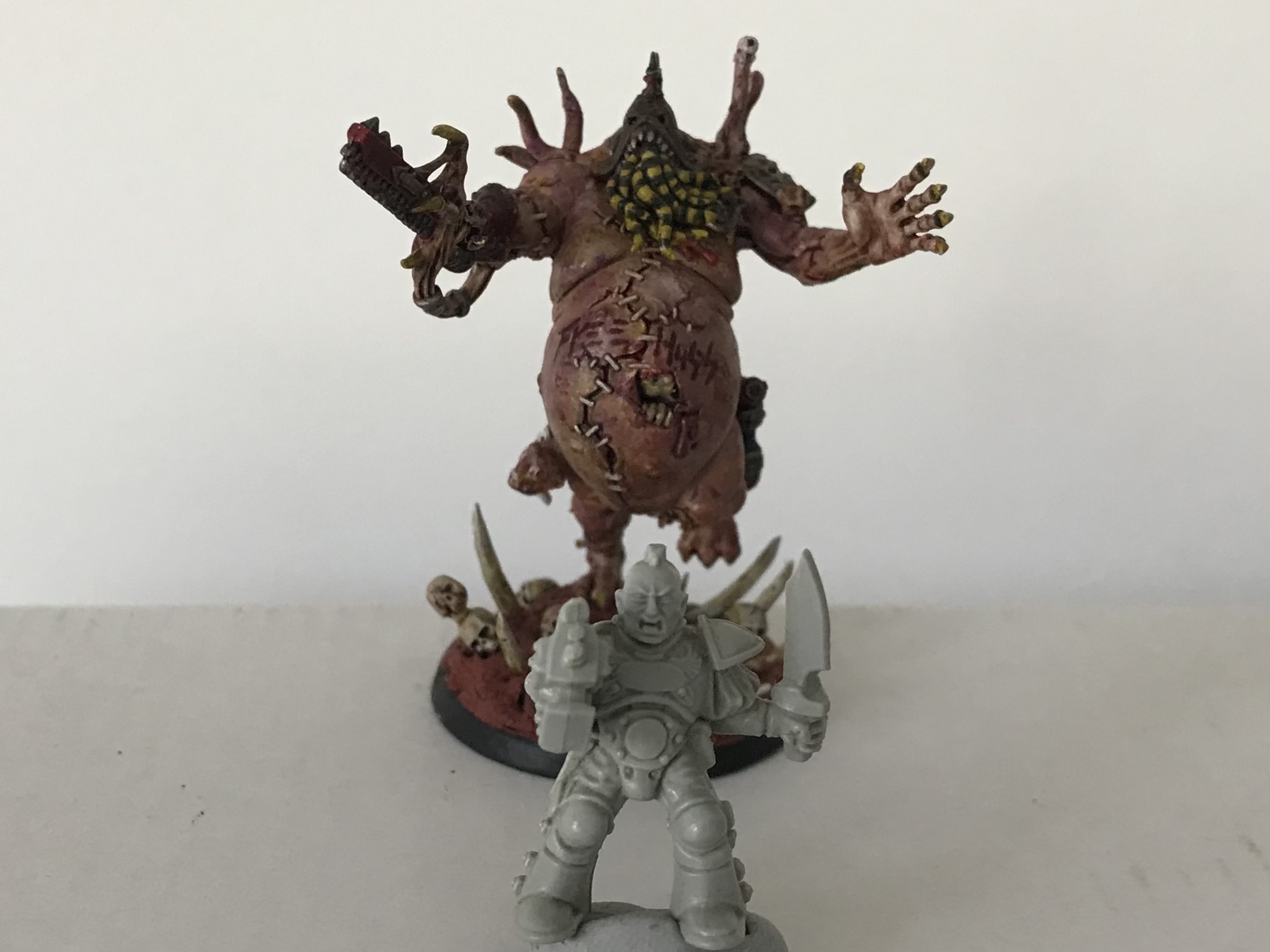 Bonus points are for painting yourself in Yakmarine colour scheme, thought I could be a puny scout running away from Pickles, but I’m not really feeling it….

This is what I’ve got stuck in my head now - making a chaosified warp-ship for potentially teleporting in and saving the disowned child of Helm’ayr in our current campaign, but I doubt I’ll finish by next week*…. Maybe add it into the competition though. Op-shop salvaged Devilfish. 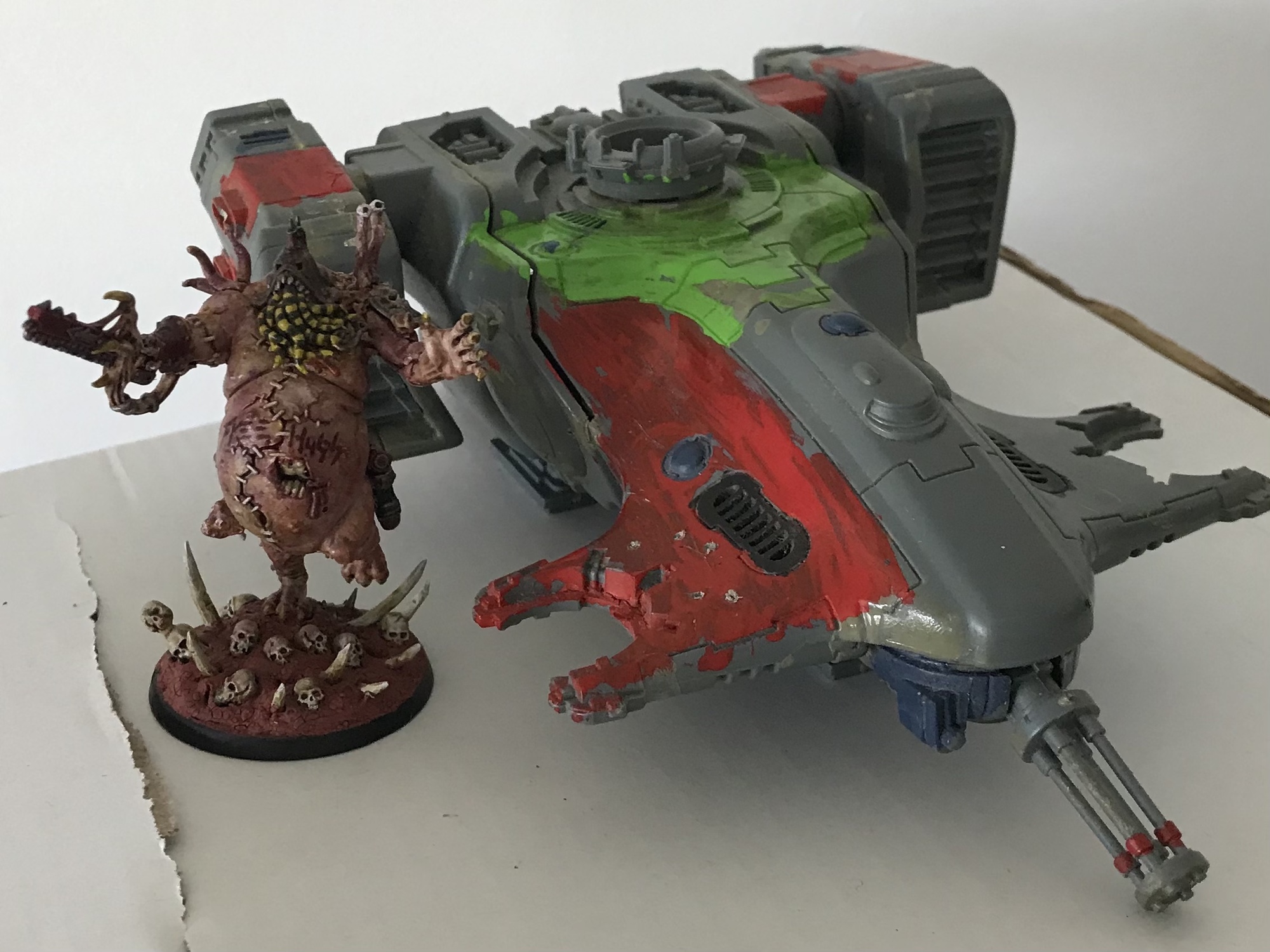 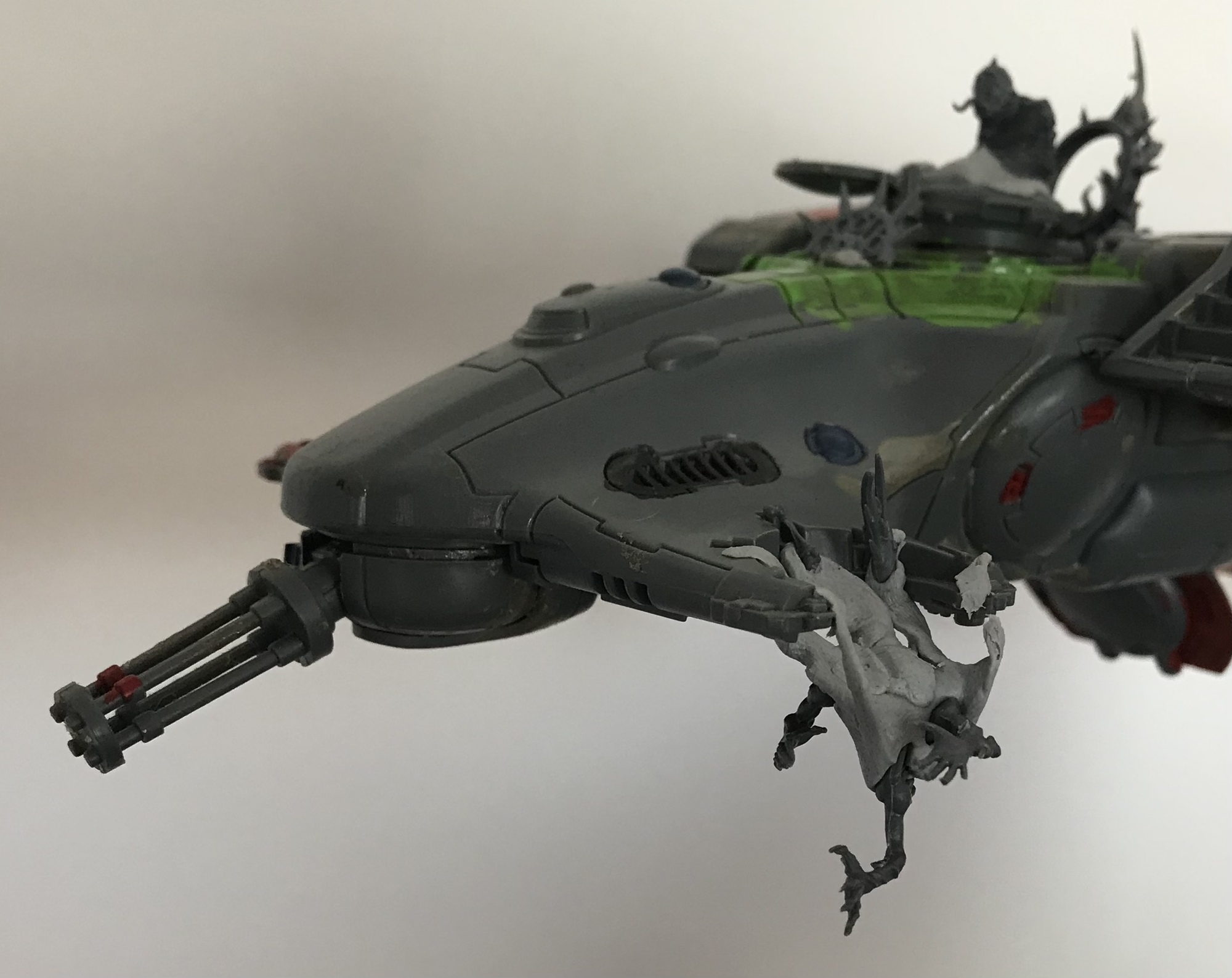 No progress except blutac. Thinking of making a couple of lil spoogily greebs on flying bases to go with it, like tau drones… Not going to be done before the end of the campaign, but I do function in spurts of energy so it may be completed before the competition closes
Reactions: CaptainDangerous, Pagumb and MedMos

Definitely not going to finish any more additional bits for my entry, but Pickles Reborn was able to participate in the finale of the Helm’ayr’s Own campaign.

There were two multiplayer games, on our table we had 3 attackers (Orlock, Enforcers and slightly chaos corrupted Venators), and two defending gangs (Coco’s Children of Juice, and the Goathouse).

The Goats formed gunlines, while the CoJ split their champions up to run aggressive interference - fully expecting to die for the cause and thus earn the favour of Juice once and for all. 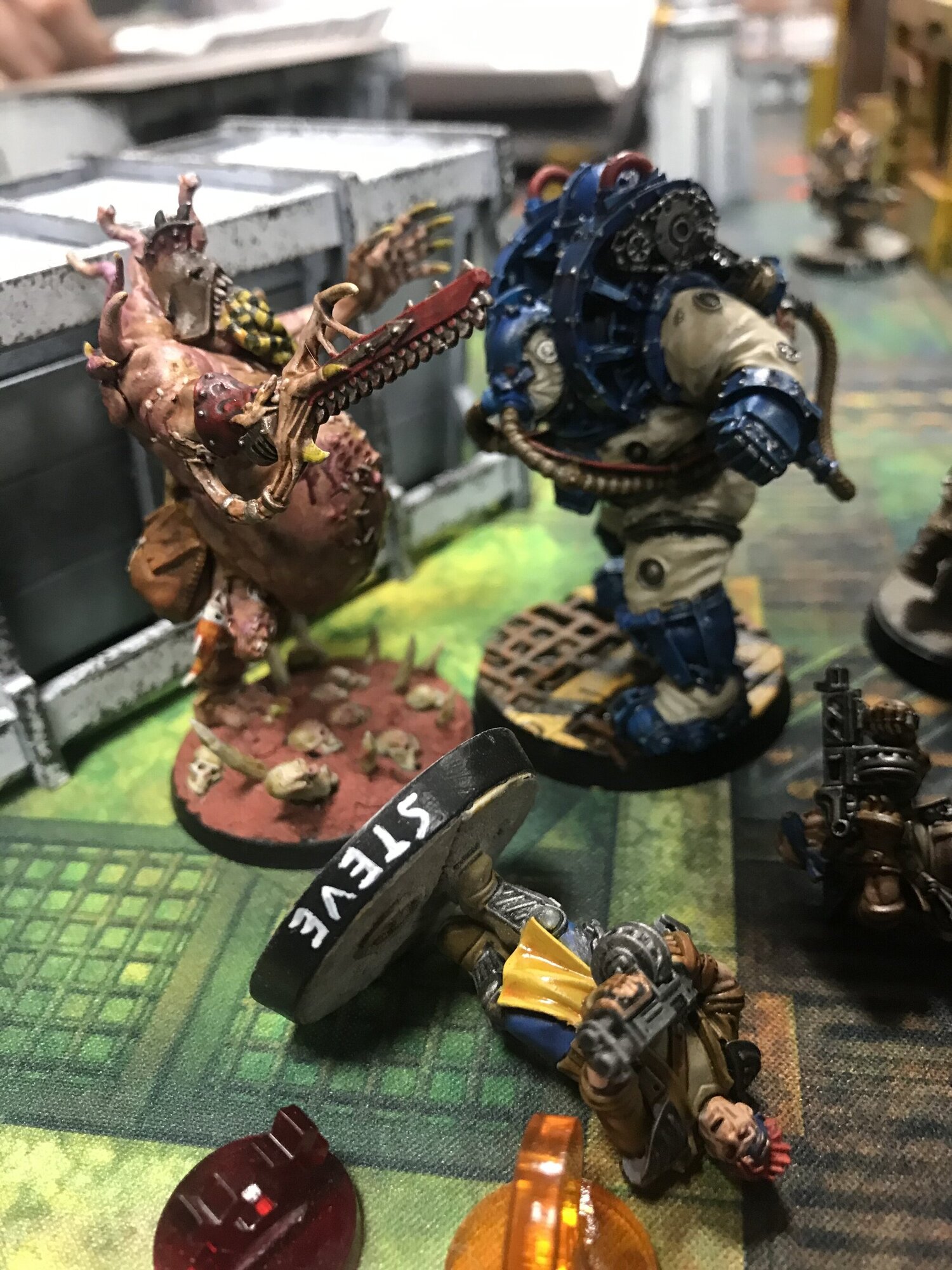 Pickles Reborn and Grawp, the Bounty Bunter, used a whole bunch of tactics cards to just charge straight into the Orlocks, who had made the critical error of running forwards in a clump to try to assist a fighter that had been pinned by a goatshot - they had thought he was down. 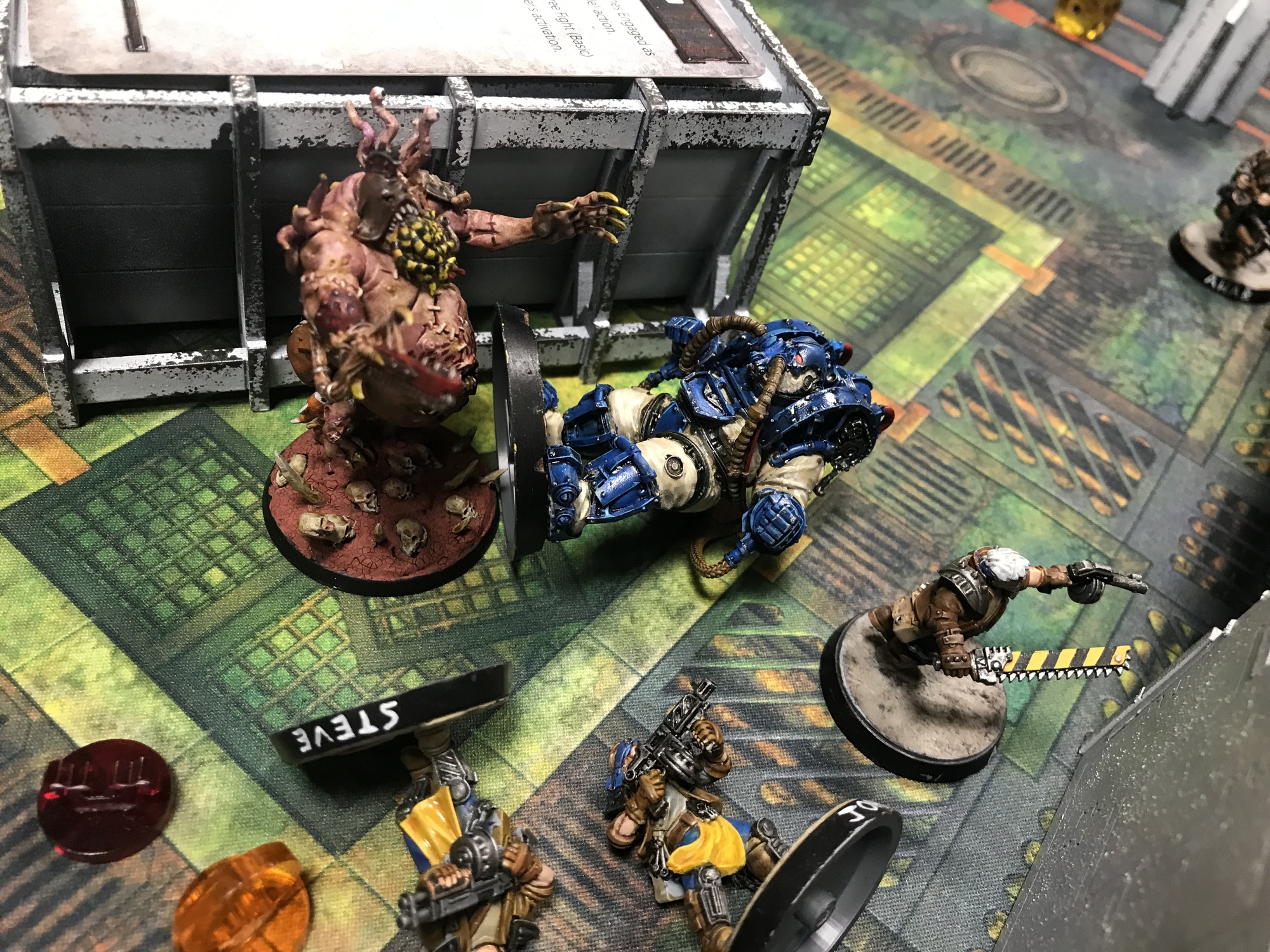 Despite the Hard Stop, Pickles Reborn managed to smash the oversized Orlock leader down, but chewing on his metal limbs provided no sustenance so he had to charge in for more flesh. 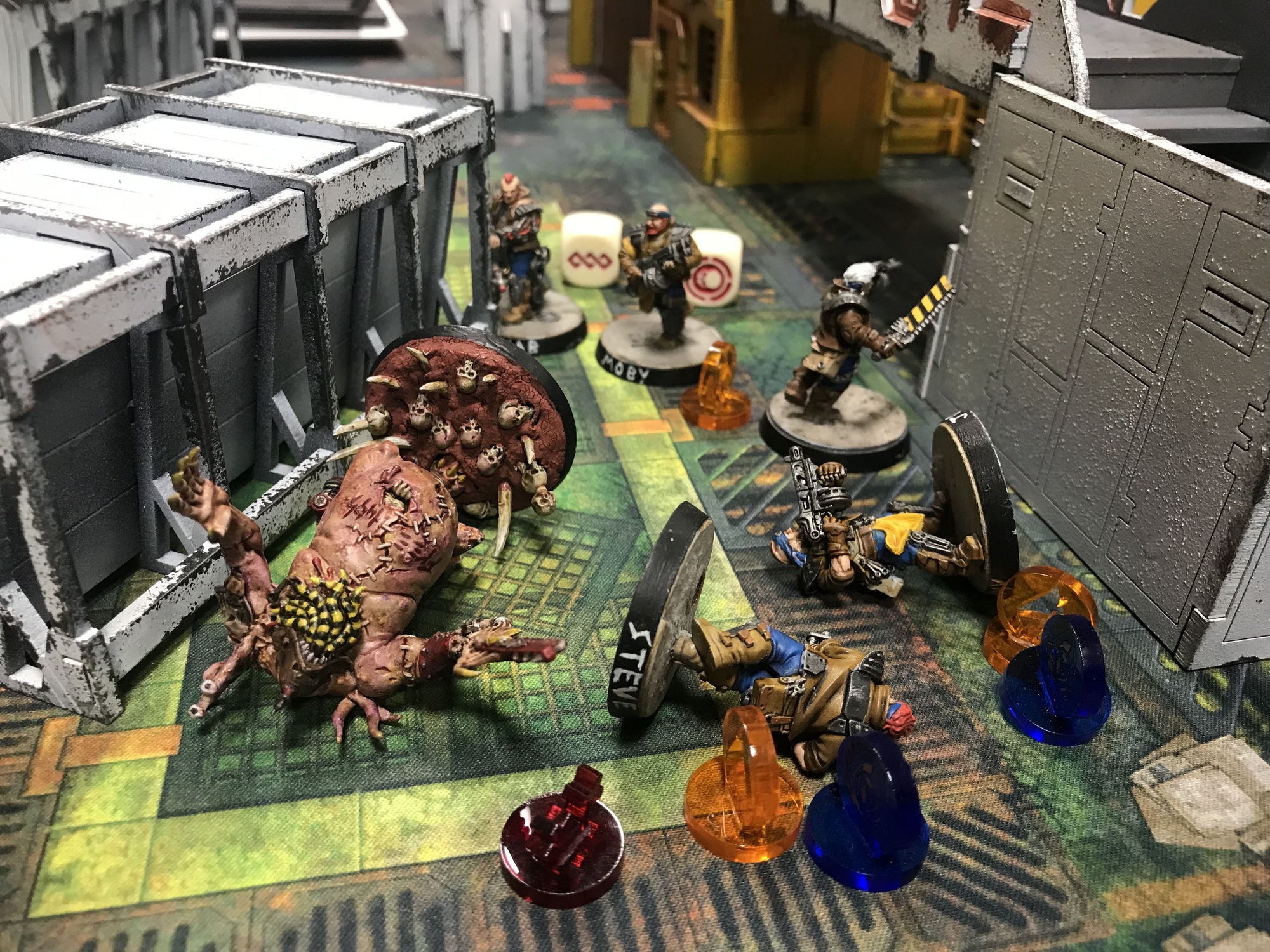 Somehow the Orlocks missed at point blank range with their harpoon, and the Heavy Bolter managed to also miss for a 2nd time in a row! So many 1’s! Pickles then stood up and charged into both the harpooneer and his mate, managing to deal 5 wounds in total, every single one rolling Flesh Wound causing them both to bleed out (in my mind, he used his face tentacles to feast on their blood) 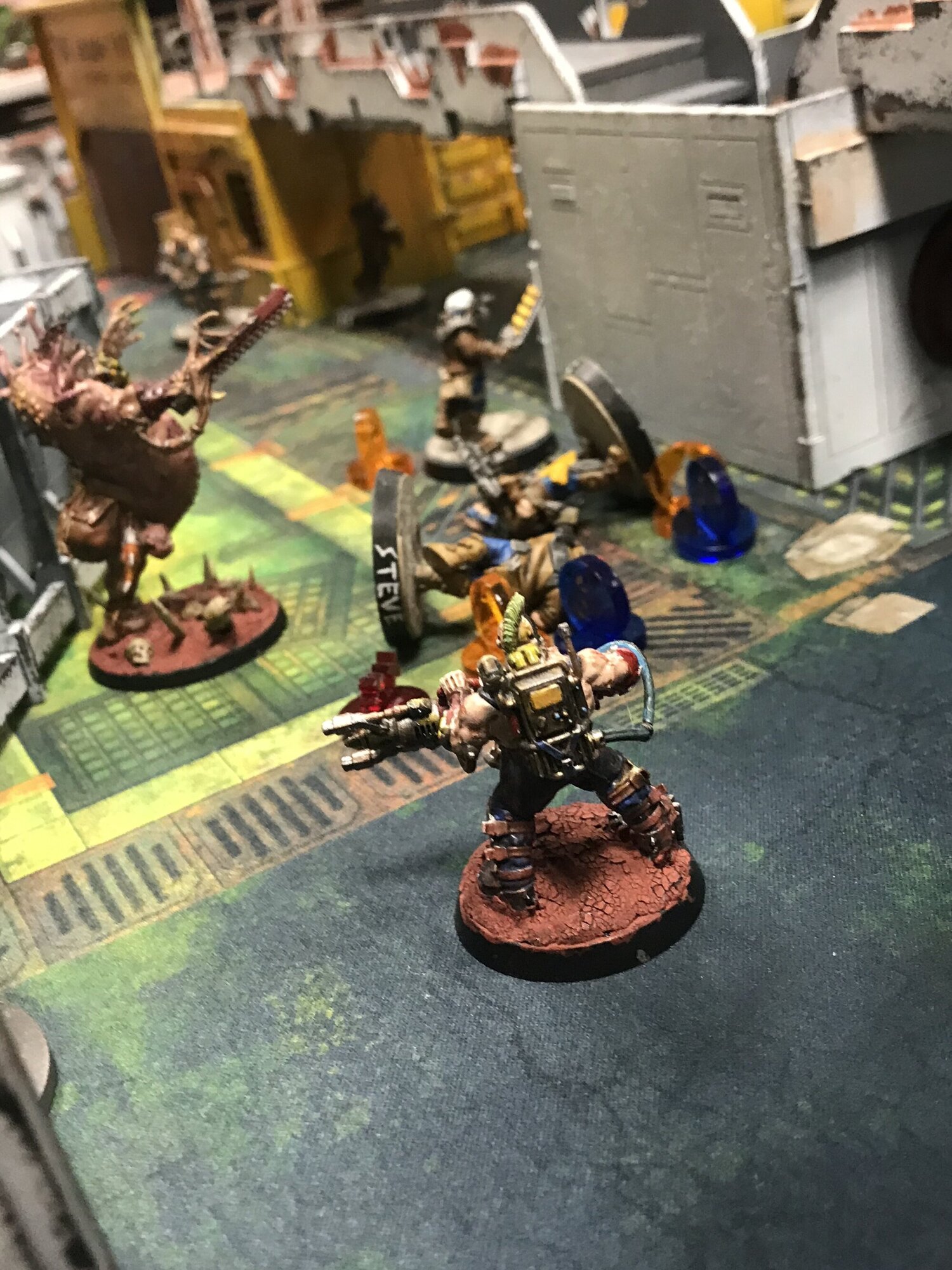 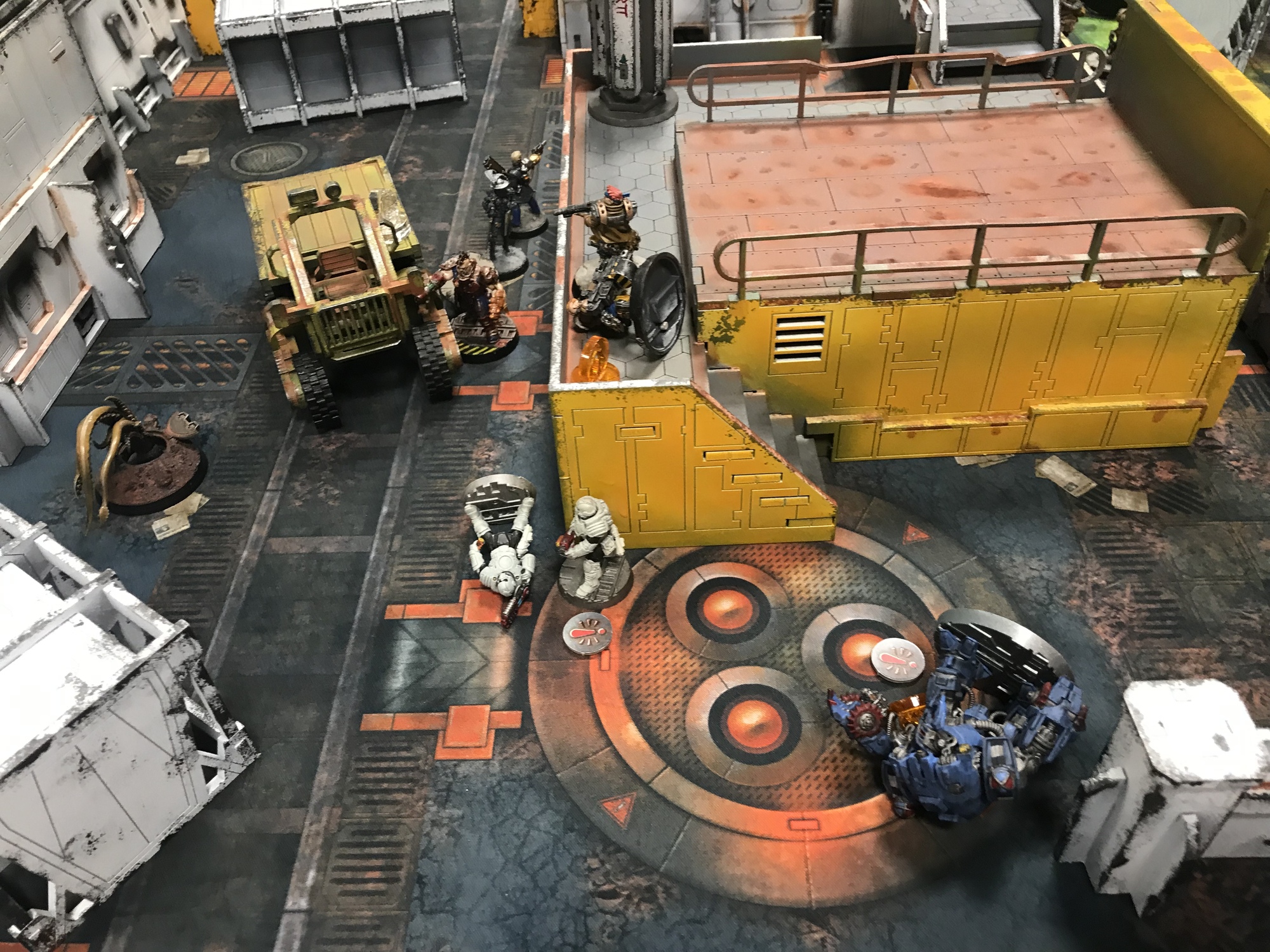 Meanwhile, on the other fronts, Hernia (not pictured because he had already been squished by this stage) had thrown two Shard Grenades into the Enforcers, and Coco the Coward ran into the shield wall to be a bullet soak with the help of the Goatmen alliance (and their sneaky Beast Lure). The Enforcers didn’t progress any further than the truck. 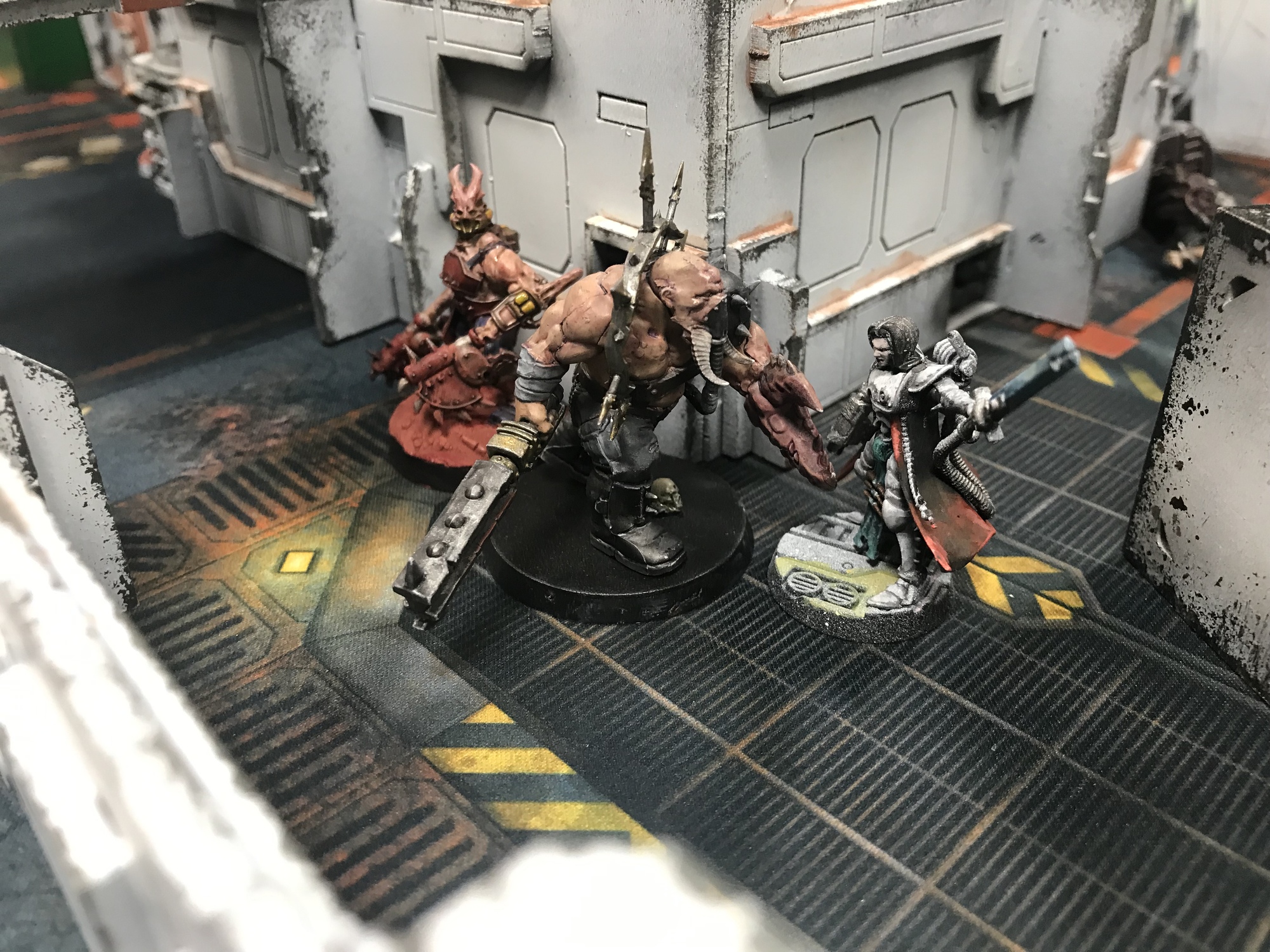 The third front had Meatloaf fighting a Chaos Ogryn, which was a very tight battle, again with the help of Goatmen allies. This front was only held because of the rain of shots from the Goatmen gunlines and their Mole Mortar. 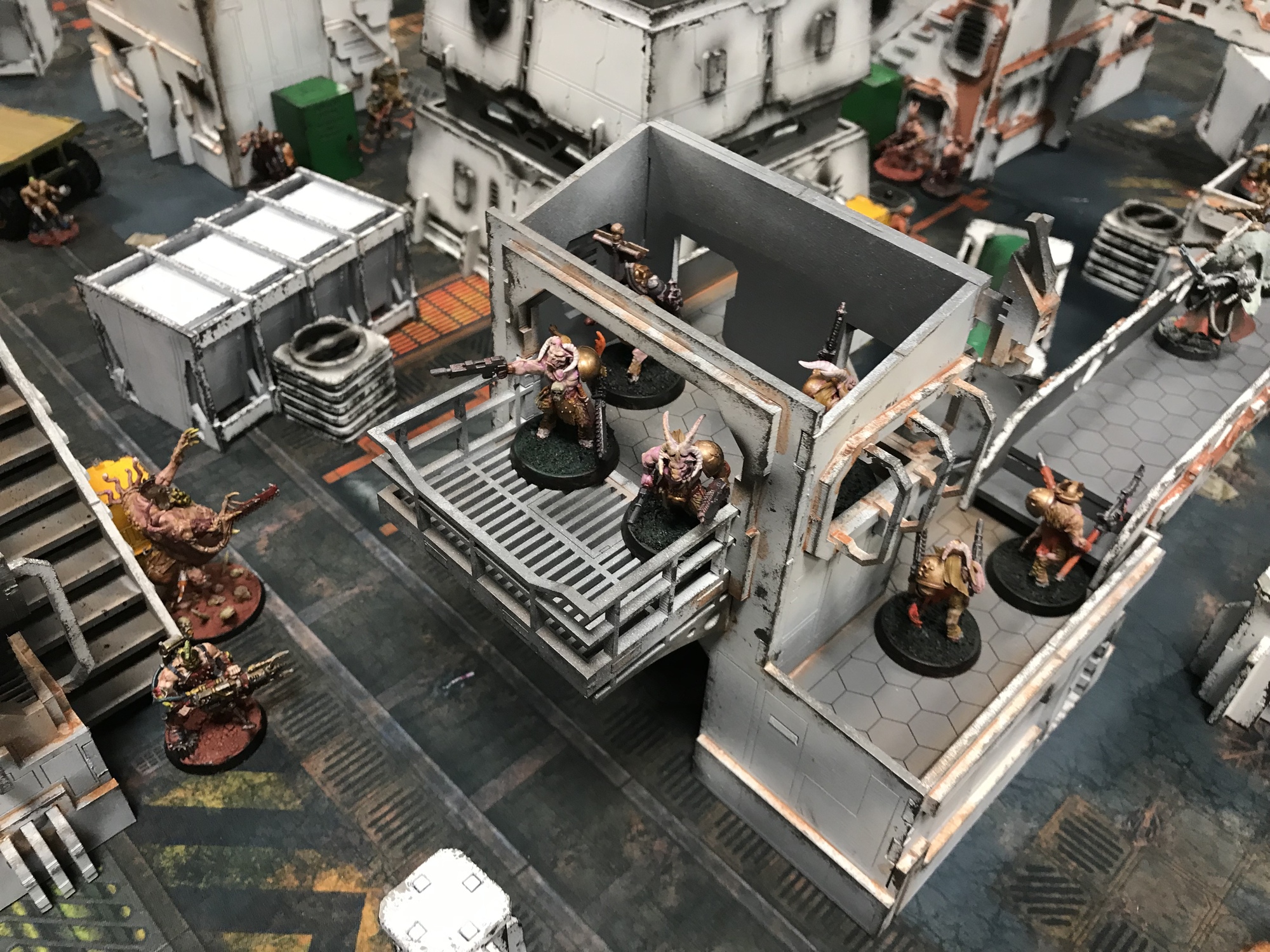 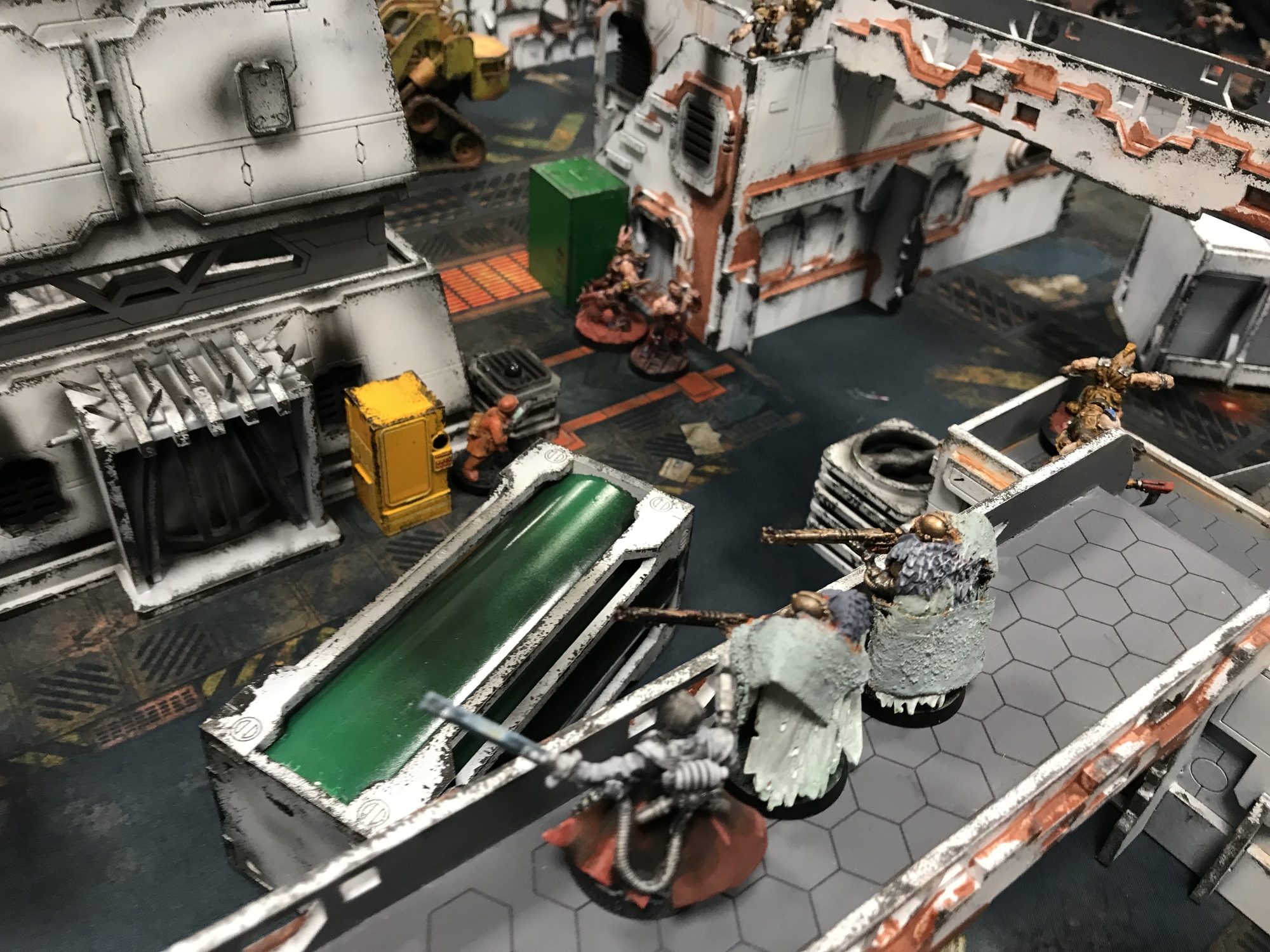 With the campaign ended, I’m unsure where to go next in the epic saga of Juice and his believers. I’m tempted to run Outcasts, with Pickles Reborn (probably Warp Horror) as the leader, going off on his own path demanding even more sacrifices to fill his belly (I made multiple unnecessary sacrifices during the last few battles, to keep Pickles sated, to the point where the only original crew were the champions) 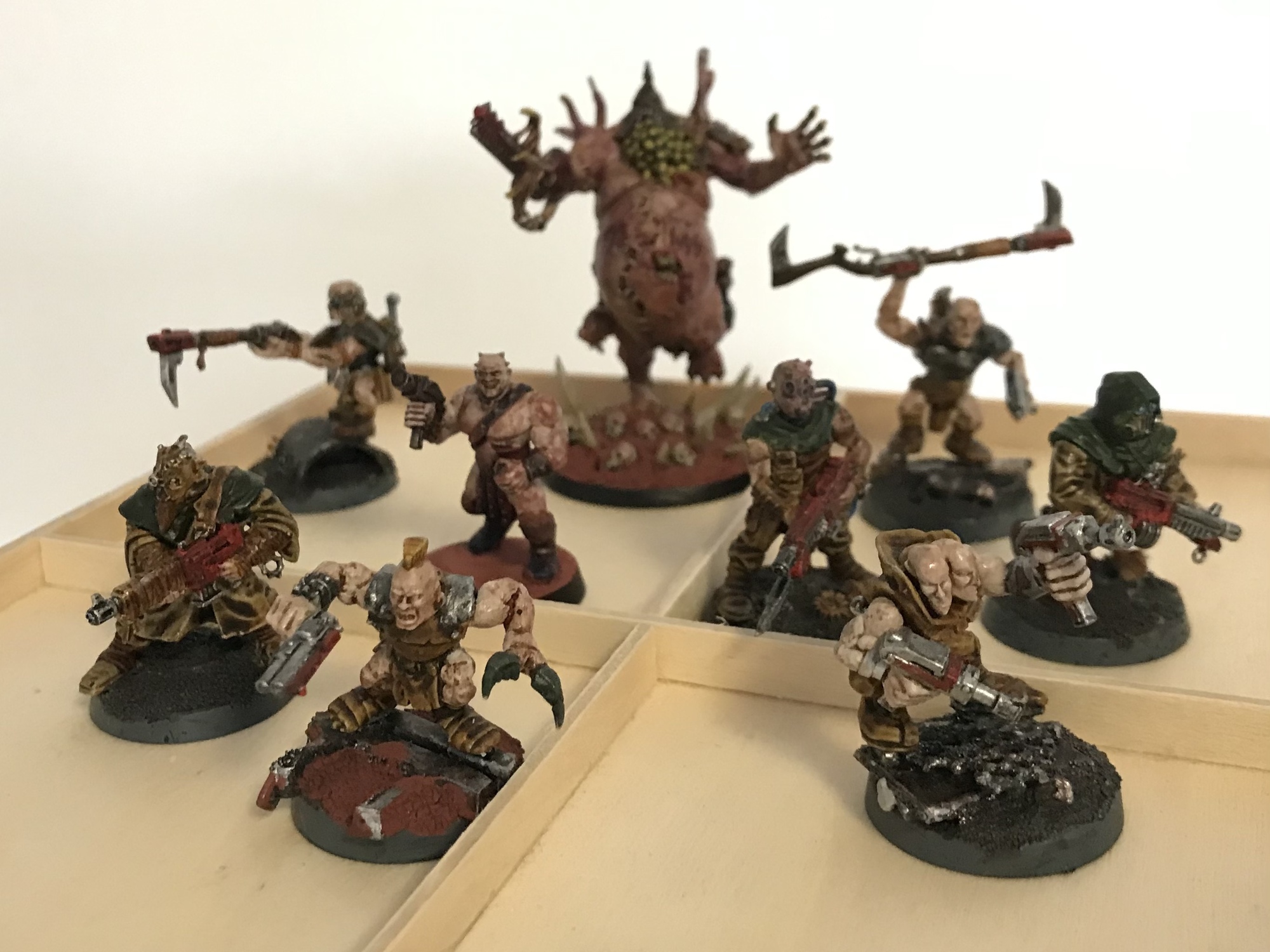 The other main option is running Juice’s Heroes. One of the players in our campaign keeps asking when I would be bringing Clarke back - he was a Forge Boss with a Missile Launcher in the same gang that Juice rose out from. So I could go with Clarke, Meatloaf and Sauce, three heroes from various previous CoJs (all reset to 0xp), with all the other followers having Terminal Biology- having come to the cause because of the True Promise of Juice. 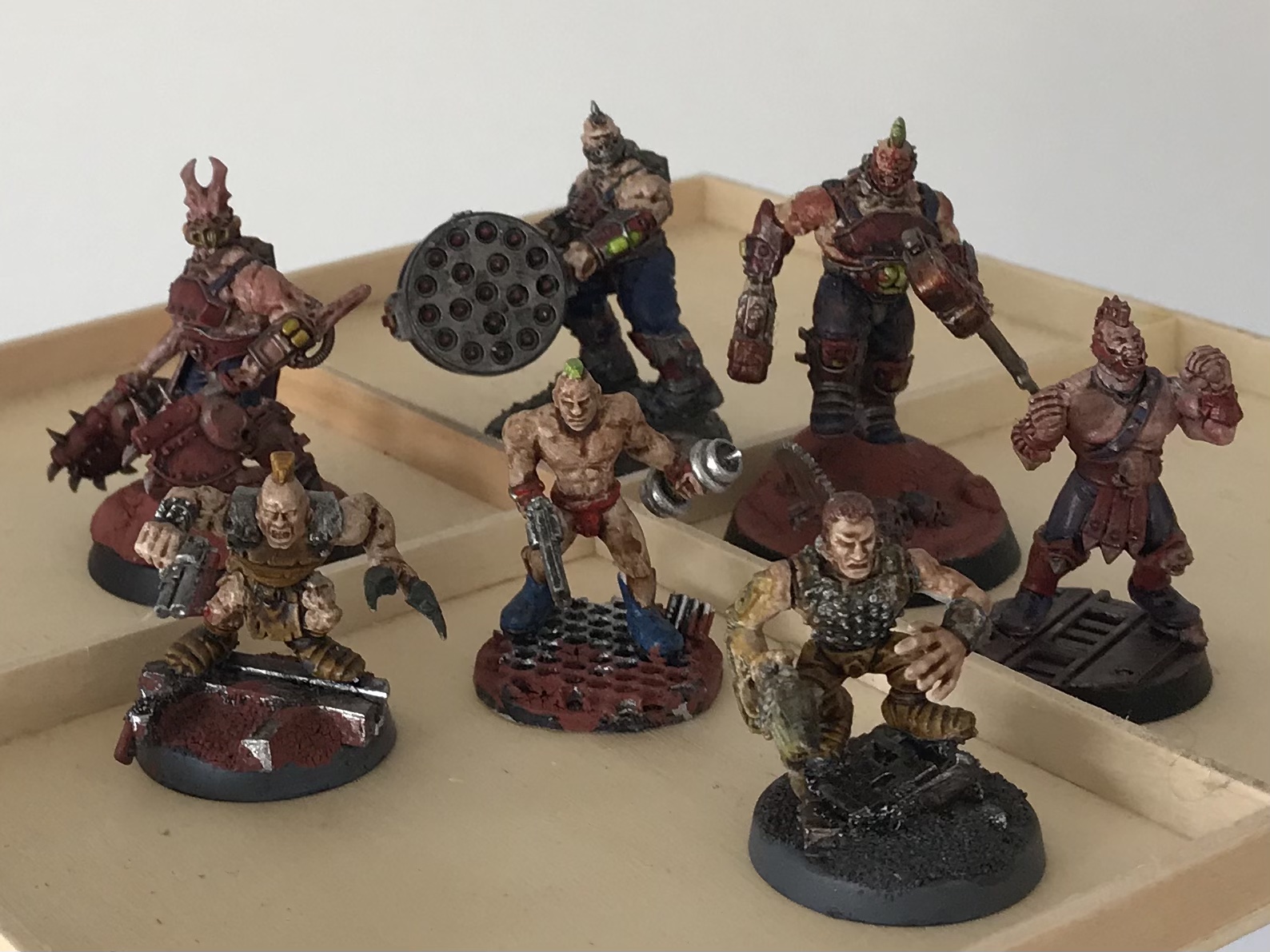 That is one crazy big missile launcher!

Where’d you get that missile launcher, Clarke?!?

Found it. Strapped to the shoulder of a mecha.
Reactions: trollmeat
P

I vote for juice’s heroes. Great continuation of the story arc and you can make Pickles a house agent or some other sort of special character.

It may be time to start collecting myths and fables around Pickles and the Juice. I‘ll start:

- That was no hive quake youngling. Yesterday was leg day and Pickles was leg pressing the dome.
Reactions: trollmeat
Show hidden low quality content
You must log in or register to reply here.

T
N18 Collected Errors/Typos in Book of the Outcast

T
N18 Collected Errors/Typos in the House of Artifice