Which 3rd party models to choose for catachan kill teams?

Currently thinking about starting a new mini project, and kill team is the most fun game at the moment that I play with my friends. I would like to convert a kill team and the thought of catachans is most intriguing to me at the moment for some reason. Don't know why, because the official GW minis are 20 years old! That would be equivalent of using minis from the early 80's when I started around 2000

GW released some awesome catachan characters that unfortunately seem to be of the limited edition kind: 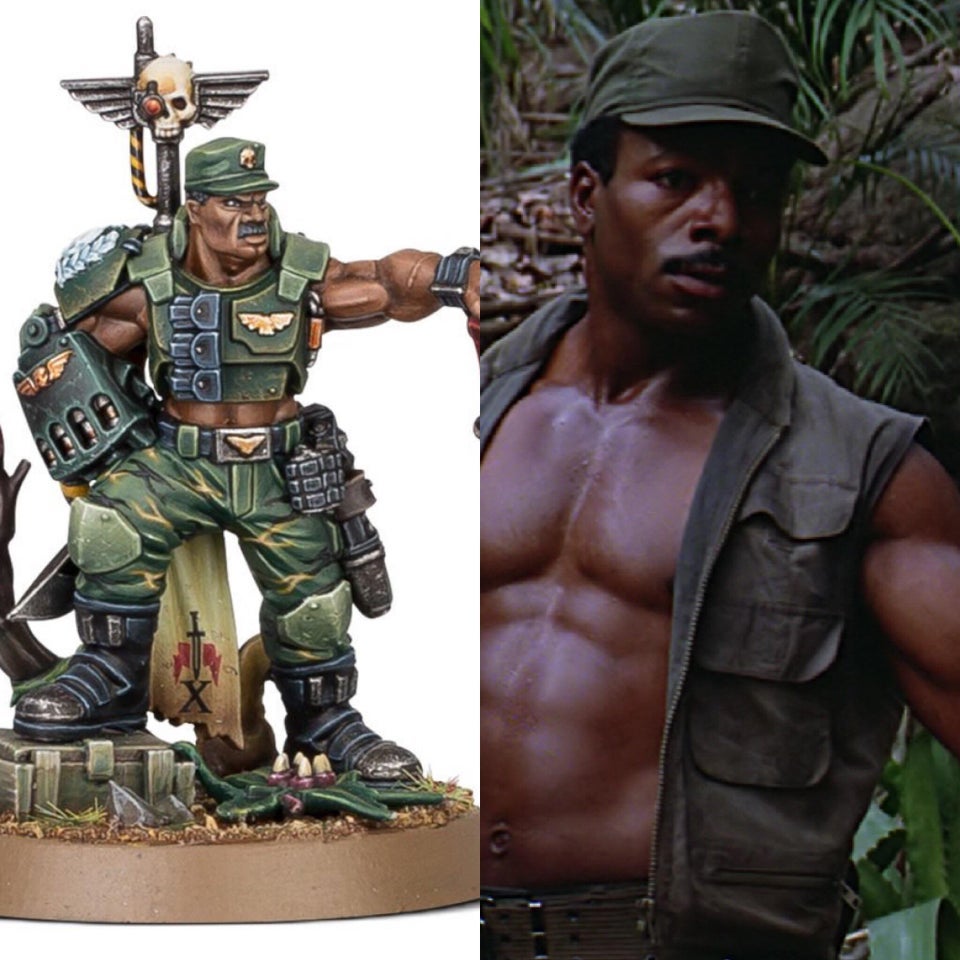 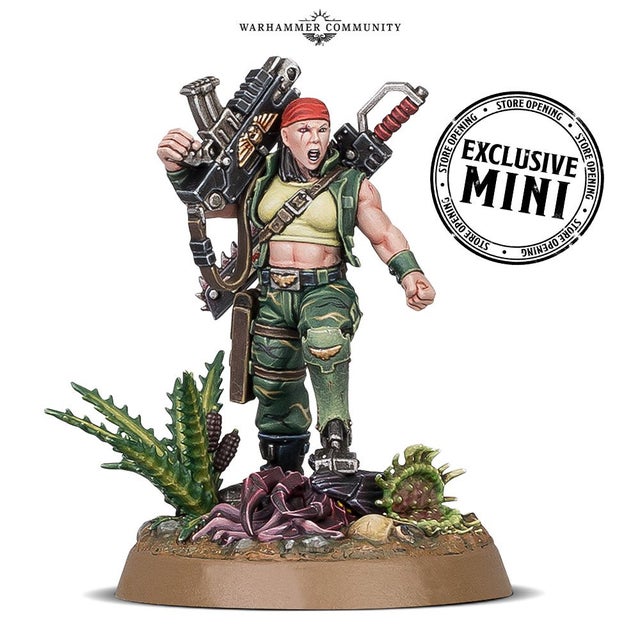 Even if I could get hold of one, I'd be tempted to convert it, possibly messing it up in the process, and that would be a disaster since I probably wouldn't get hold of another one.

Then there are some good 3rd party alternatives. For example space nam: 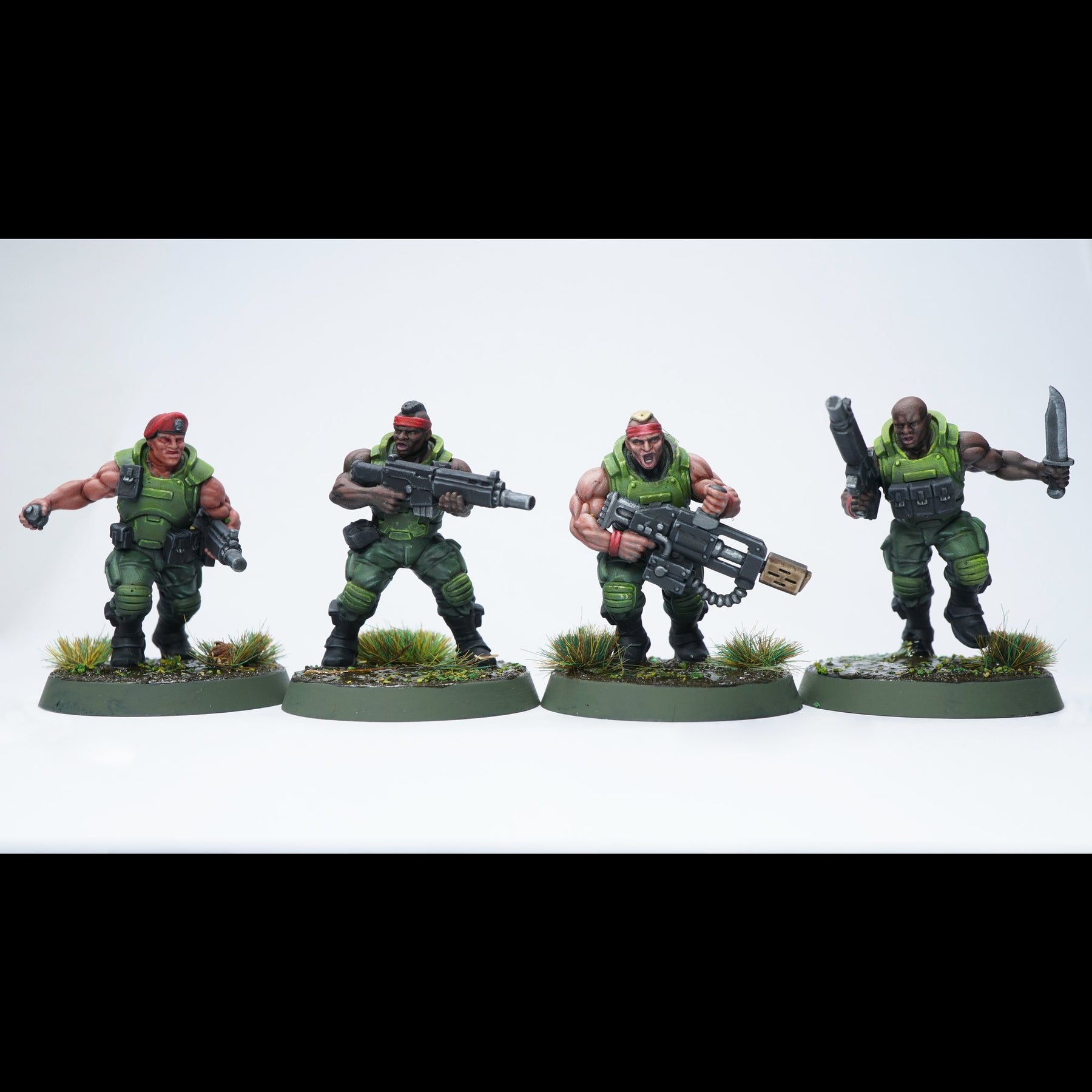 The benefit of this is decently priced plastic. Possibly the best choice with enough bits to get variety and possibility of conversions.

On the other hand, I like Hardcore Miniature jungle fighters better! And enough sculpts to potentially make the entire kill team female! 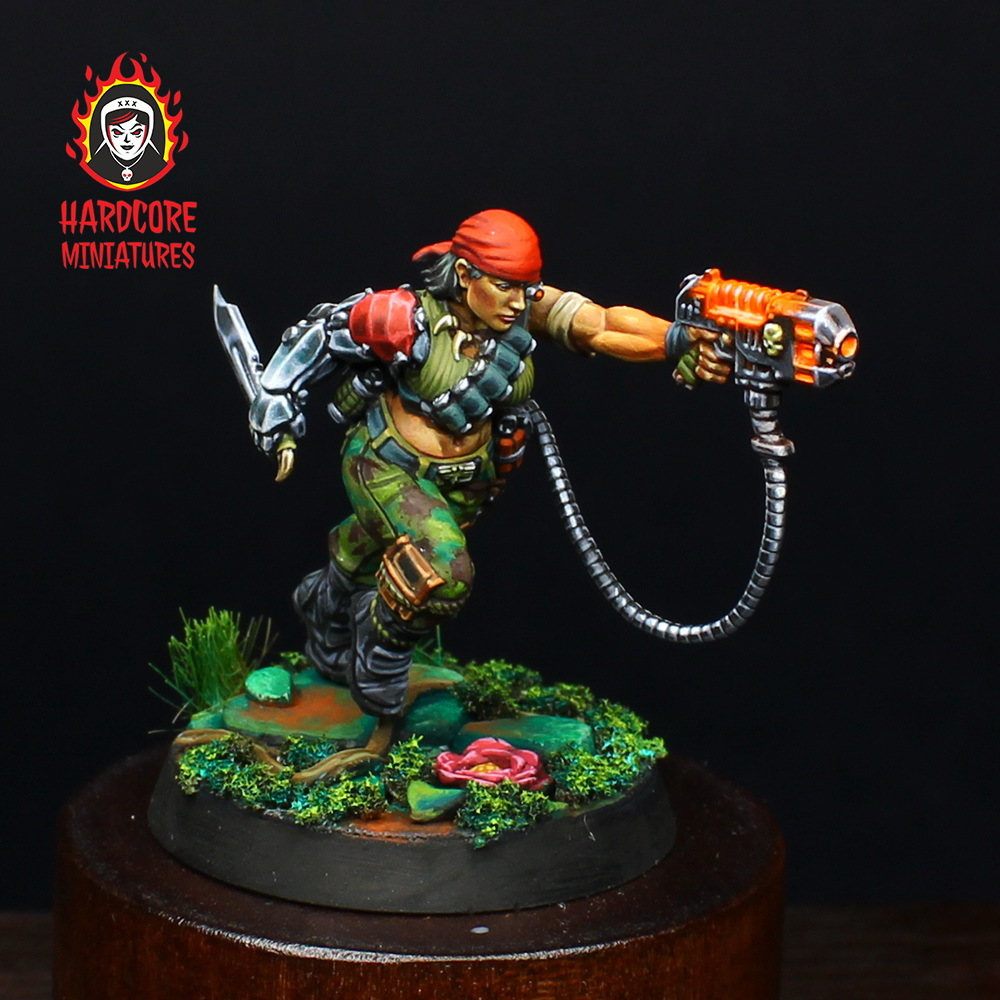 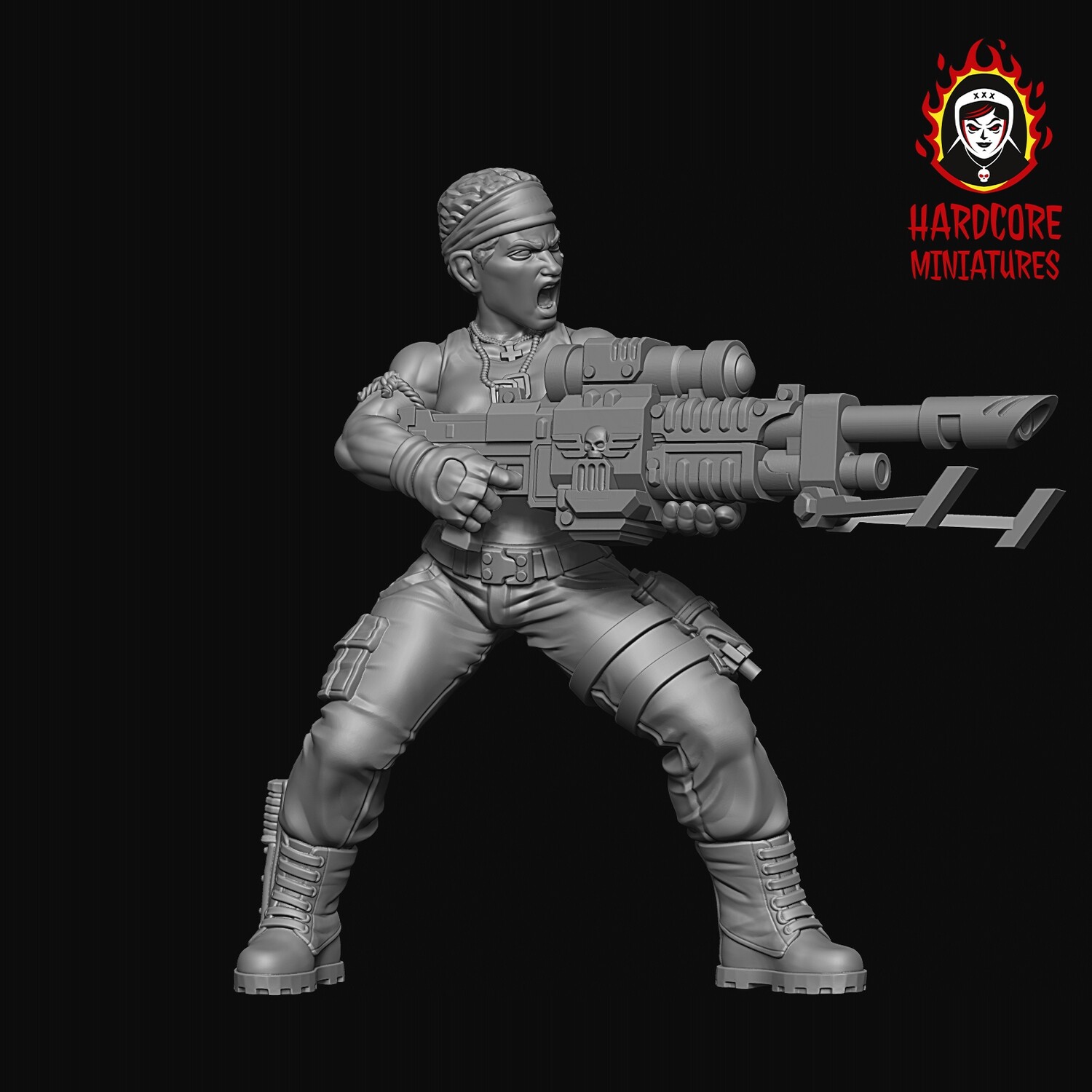 The downside with these is that they are blood expensive! 12-13$ per model. Plus shipping and then $$$ customs on top. I need probably around 20-30 minis to have enough variety for multiple different kill teams, so with hardcore miniatures it would end up costing 200$ minimum, but more likely I'd be tempted to buy "everything" so more like 300-400$. Suddenly GW or even FW starts to look like a cheap alternative!

At minimum the plan is to make at least 1 kill team. For example Compendium Imperial Guard. But ideally it wouldn't take much extra effort to make enough models to represent most "human chaff" teams, from the more elite Compendium Kasrkin (basically space marine scouts) to bespoke Veteran Guardsmen (Krieg), Navy Breachers or even stretch it as far as blooded! 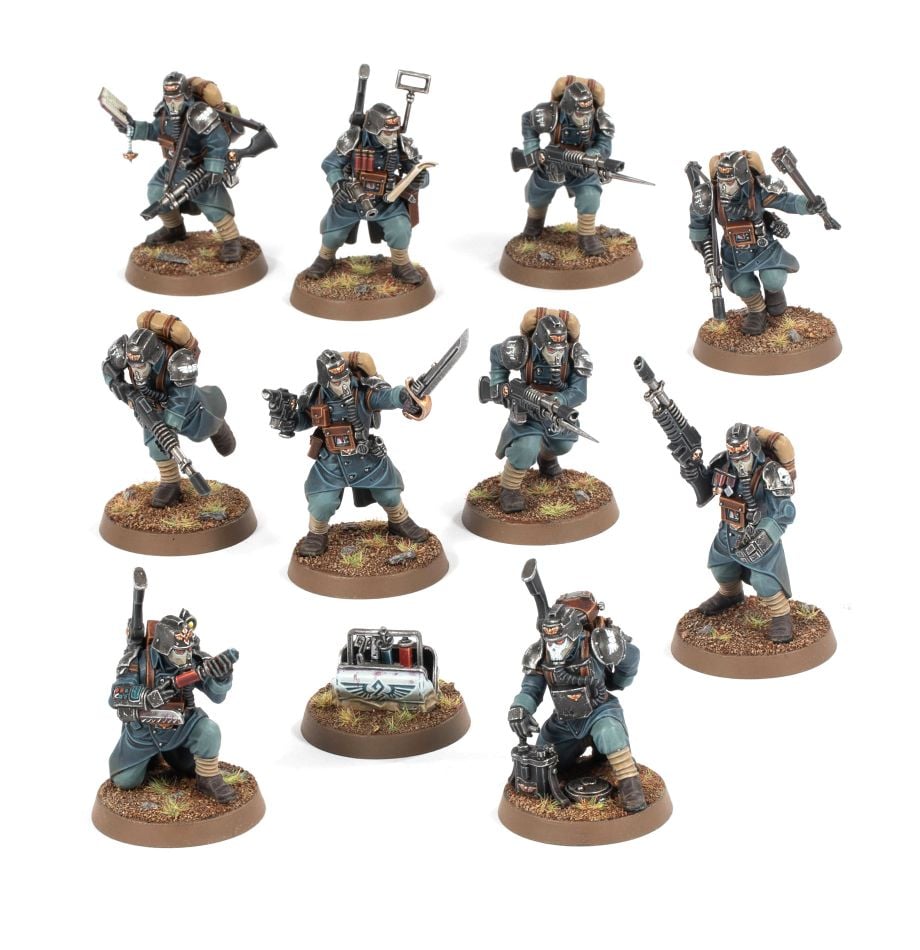 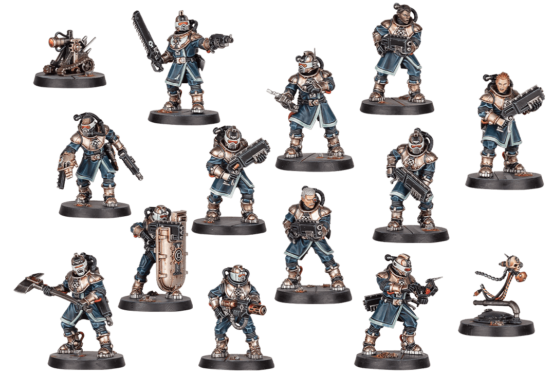 I'm confident it is possible to represent all these teams WYSIWYG using catachan equivalents with some conversions for special equipment like binoculars, bionic limbs, bombs, special weapons and comms.

If I was able to put together a catachan team, I'd even be tempted to make a proper jungle board for them! That's a decently sized project though.

Are there any other suggestions for catachan 3rd party options? Any chance GW will release new catacha units in the near future? What do you suggest, make due with the cheaper space nams or spend big money on the hardcore minis to get an all-female team? Can't make up my mind at this point.
Last edited: Jan 22, 2023
D

One downside is it looks like the box only has 4 unique bodies? Not sure how much you could mitigate that by conversions and mixing up legs & torsos.

Pretty sure space nam is a licensed product from reptilian overlords, which will sell you STLs to 3D print loads of other options for that range. The plastic ones are convenient but the fancy extras are designed for printing.

If you don’t own a printer you could get them done elsewhere as long as you abide by the STL licensing agreement.
Reactions: Sundown Dreamer
T

That is brilliant! Loads of options like comms, binoculars, power fist and special weapons. I prefer spacenam's chunky heroic scale over the true scale that is so common for many other 3rd party options. Was tempted to get everything from raging heroes Sci fi range (jailbirds and other guard like minis), but their scale is a bit too small for my liking.

Need to talk with a friend of mine with a resin printer...
Reactions: Sundown Dreamer
P

There's also some excellent Mad Robot heads that could add some additional style to the jungle fighters.
Reactions: TopsyKretts
T

Turns out my friend isn't interested in using his 3d printer at the moment. How much does it typically cost to use an online 3d printing service? Edit: Nevermind, turns out they can be purchased from ebay... and they're expensive!
Last edited: Saturday at 11:13 PM

TopsyKretts said:
Turns out my friend isn't interested in using his 3d printer at the moment. How much does it typically cost to use an online 3d printing service? Edit: Nevermind, turns out they can be purchased from ebay... and they're expensive!
Click to expand...

Shame. Perhaps he’d be open to lending you it then…

Printing yourself will cost a fraction of getting them from eBay. I’m not sure what pro printing companies would charge.
T

Unfortunately I'm not interested in dealing with 3d printer either. One problem he mentioned last year was it needed a decent room temperature (he had it set up in a separate room in the basement), which is not always affordable this time of year and with the current energy crisis. Anyway I got a bunch of minis from wargame exclusive now. They had some spacenams variants I didn't find elsewhere. However they didn't have everything so ended up buying the rest from ebay. Typical price of 7$-8$ per special mini. 3$ for the standard ones in the box. Even bought the heavy weapons set mainly to get the binoculars and comms. I needed all of them and some multiples of the same one too since I need to cover a bunch of kill teams 320£ and counting, expecting a heavy customs fee in addition. Cheaper than GW and other 3rd party options of the same quality.
Show hidden low quality content
You must log in or register to reply here.

C
N18 Forget top tier, what is the worst gang list you can think of?