After a loooooong time we finally got together for a bit more Quest. A dwarf, a wardancer, a witch hunter, and a warrior priest were enlisted to find a missing dwarf prospector, and stumbled into a nest of night goblins.

The quest with level one warriors with no wizard was a real battle, even against goblins. Squigs and spiders proved a tough combo, at one point trapping two heroes in a room with a slowly descending ceiling, who made it out just in time thanks to a lucky skeleton key find. 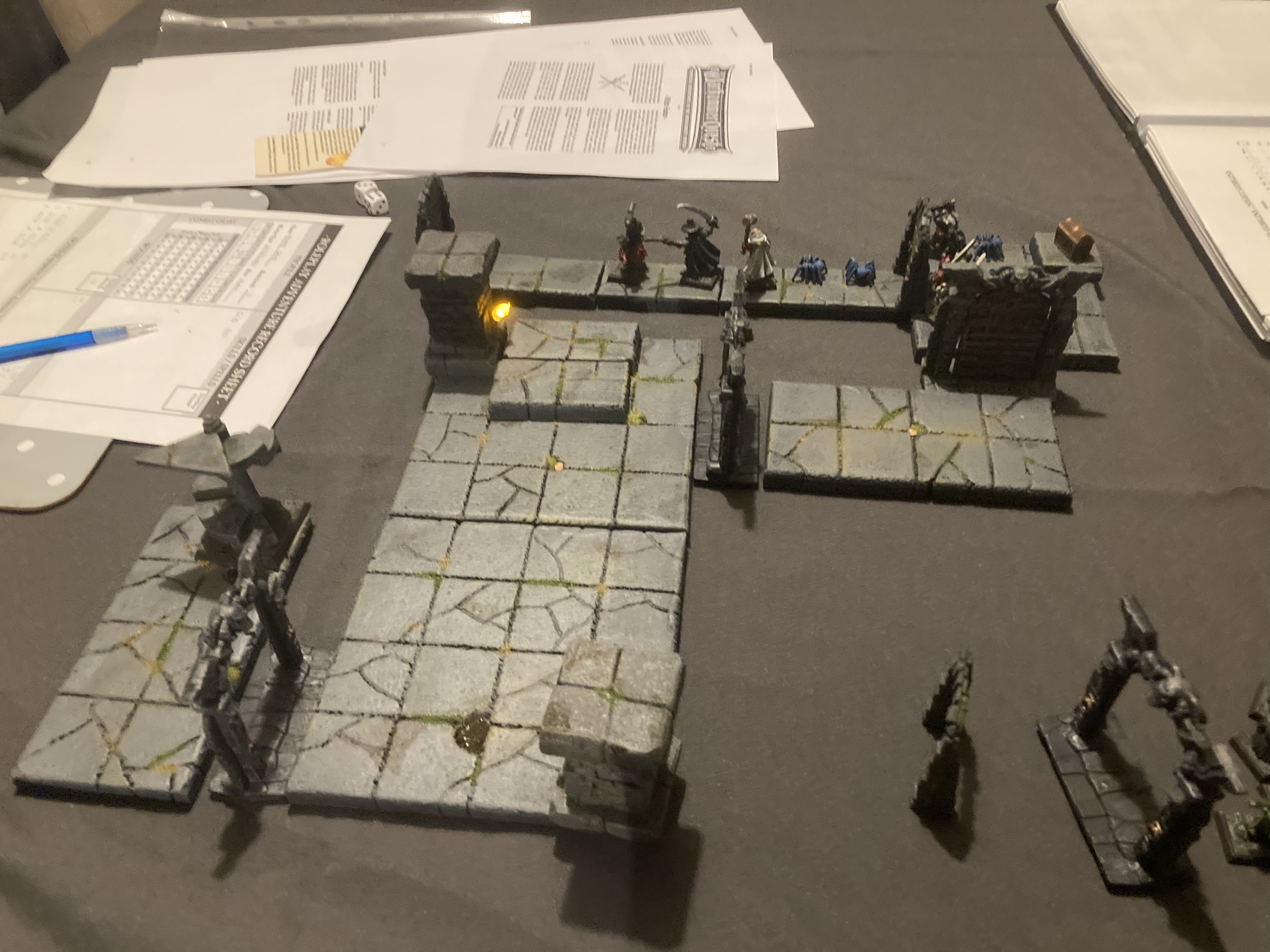 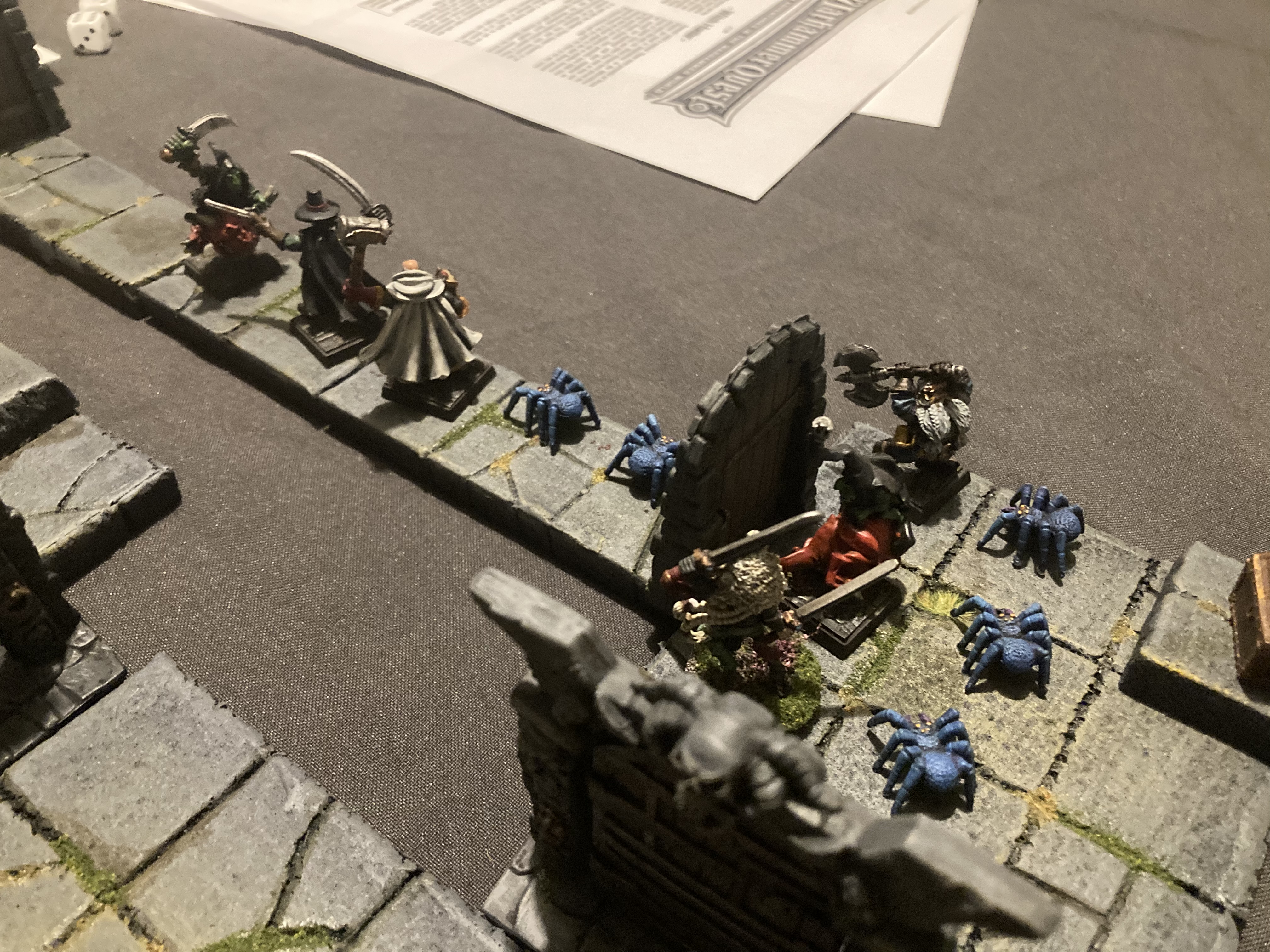 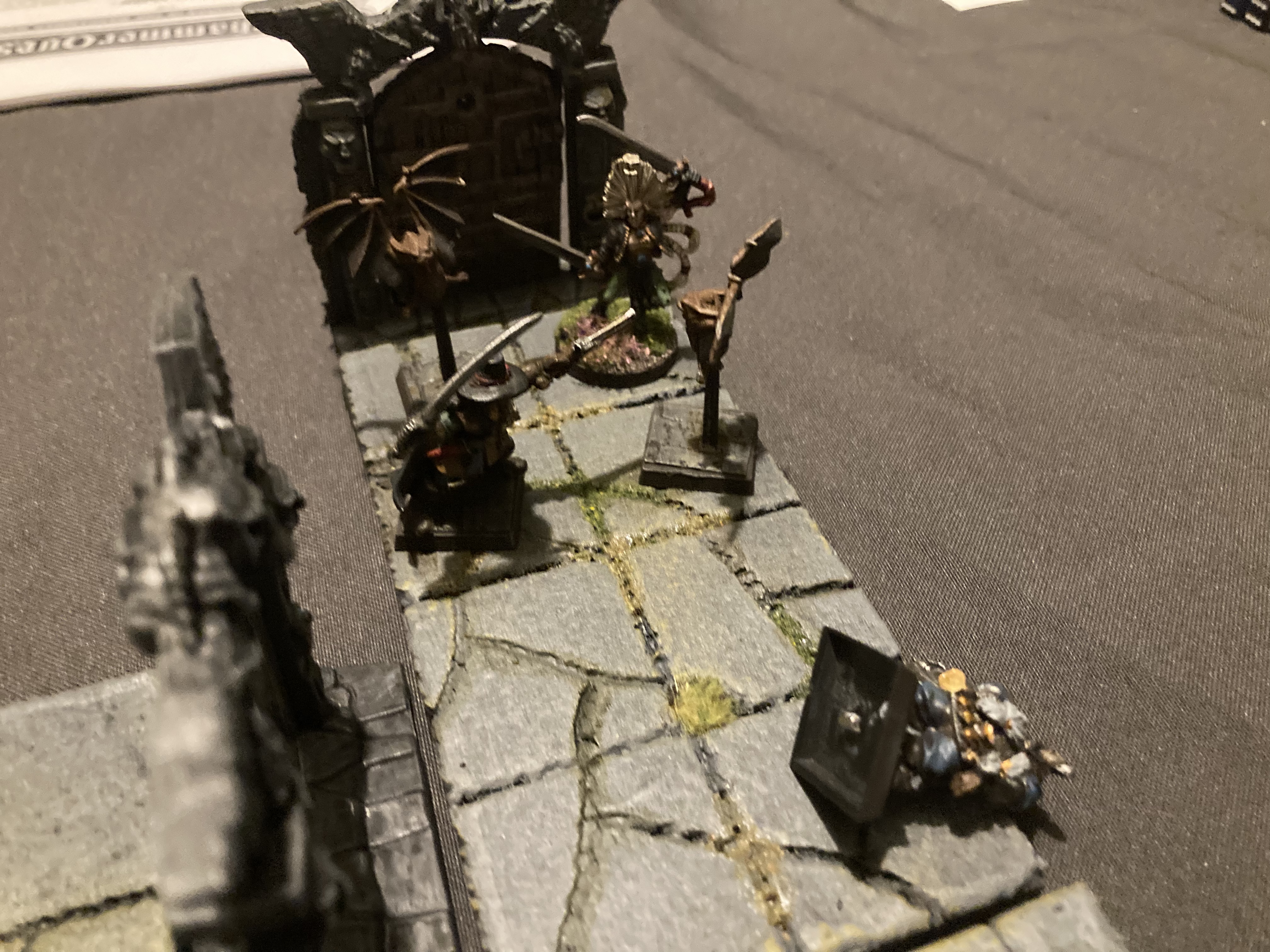 Tripped on the beard
Our dwarf was particularly useless, rolling an astounding number of 1s to hit, matched only by the power rolls of the warrior priest who was even MORE useless, spending half the game incapacitated and the other half failing to bless anyone… we are pretty sure a copy of the beano was hidden in that holy book.

The final room encountered a goblin shaman with a troll and his bodyguards, the heroes got lucky and managed to kill the troll before he could regenerate, eventually stoving in the head of the shaman and freeing the dwarf. 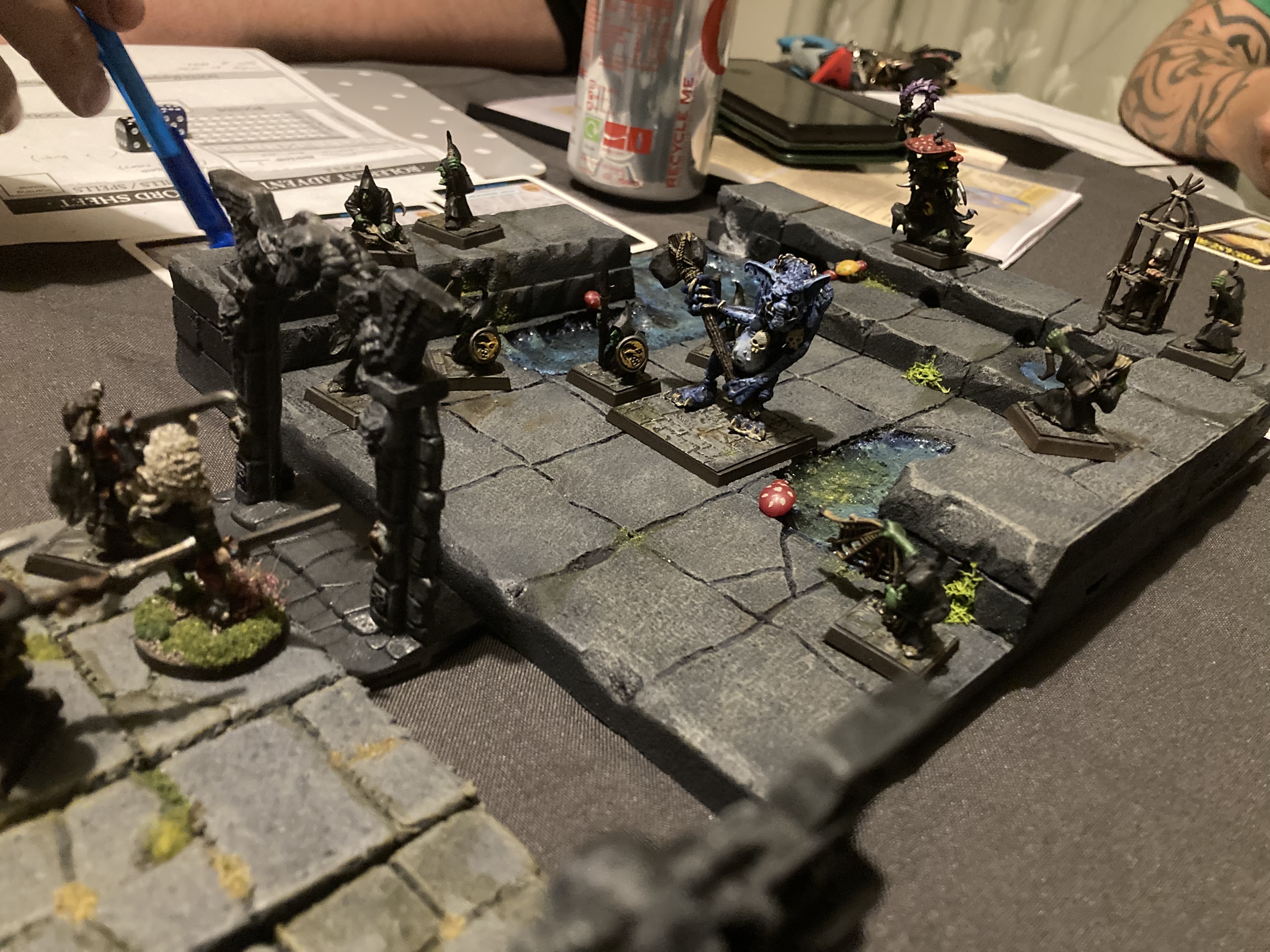 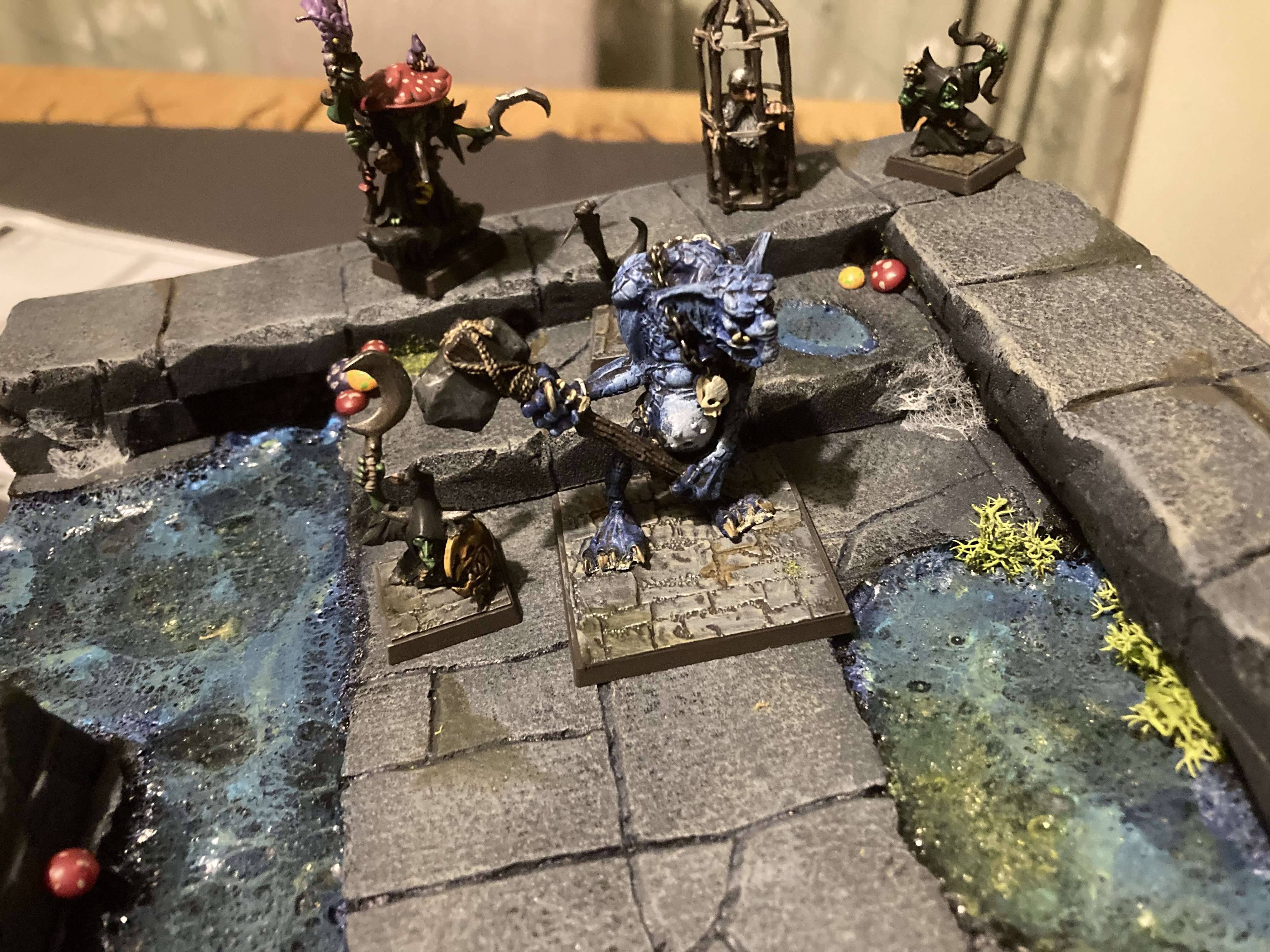 Baddies
The battered heroes made their way back to town, lead by a guide who eventually stole half their treasure. The city was nearly as bad as the dungeon with the dwarf getting run over by a cart and reduced to begging, and the witch hunter being arrested for supposedly assisting a criminal. The Wardancer pranced off into the woods, and the warrior priest was retired after losing so many of his staring wounds (a little house rule we have instead of insta death when incapacitated).

Overall it was classic quest and the start of a whole new campaign.
Reactions: Stoof, Biggle_Bear, Space Truckin and 5 others
R

How are you setting up your objective room contents in your current games? A goblin shaman with a troll bodyguard (plus unimportant goblins!) seems too perfect to be a product of random monster tables, and I am looking for a better way.
Your objective room picture also makes it look like maybe you are using an alternate system for placing Monsters on the board?

Keen to read any other house rules you are happy to share! Thanks
Reactions: Luke82

I GM every game so set the monsters as I see fit really. I have an idea for what will be in each room and then adjust according to how the heroes have been doing… this was a tough dungeon (and level 1 heroes) so I left out the planned second troll and wild Squigs in the last room as it would have been a death sentence! I try and balance a challenge but overall keep the heroes alive as that’s the fun part.

House rules wise we do a few things.

We pool gold (just easier) and simplify living expenses to a flat fee (the expenses became so trivial when striding out of dungeons with thousands in gold as you go on).

The ‘must heal by the end of the turn’ for zero wounds is ridiculously tight and basically means it’s impossible to play without a wizard, which we can’t always guarantee with everyones schedules. So we give it a bit more time and people start losing starting wounds instead, getting weaker instead of dying outright.

We also limit the amount of magical items that can be equipped / used at any one time to stop some of the more outrageous skill and item stacking.

These little things have suited the way we play with a GM and eases some of the wonkier bits from the game.
Reactions: Pagumb and Stoof
R

Awesome, a GM is the missing link!

Thanks man, some helpful tips there, shaving the wonkier bits from the game is a big challenge sometimes, but so valuable.
Reactions: Stoof and Luke82

Our intrepid heroes chased after some missing road wardens, who had been investigating a recent spate of grave robbings, and it lead them to a dank cave. They strode in, and were soon battling hordes of foul zombies. The zombies had a penchant for returning the the battle after being (re)killed, and the heroes took a fair while to bash through the first horde. Finding a trap door, the smashed it to splinters, unleashing a swarm of giant bats on to them. The bats were riddled with disease, and the dwarf ended up with his eyes crusting shut. The heroes then lowered the wizard into the pit via a rope. They soon realised lowering the geriatric spell caster in was a bad idea as the wiz encountered more zombies in the bottom, which he had to fight alone. Finding a bit of gold, the wizard’s compatriots hauled him back out and pressed on. 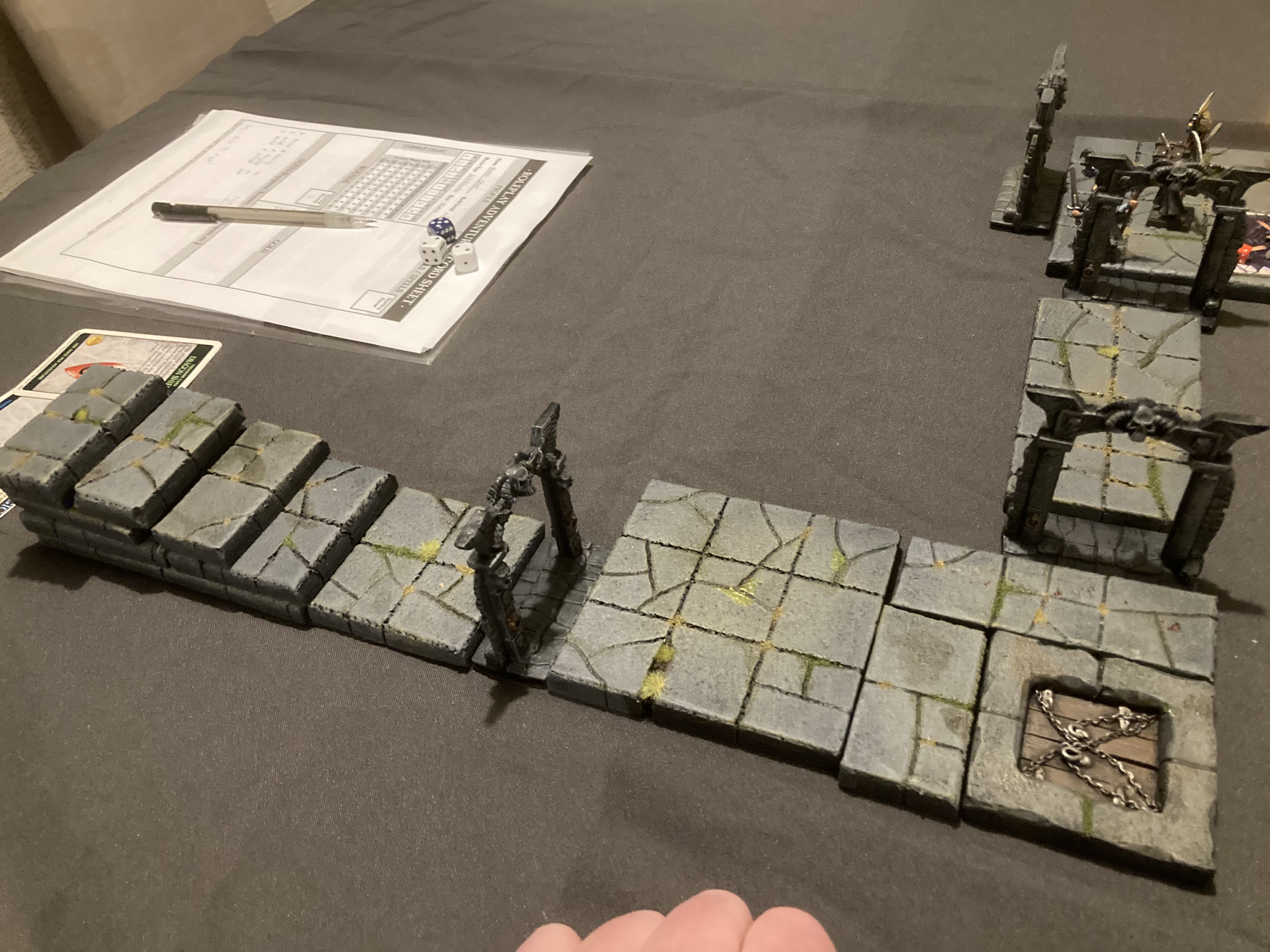 The next room was full of more zombies and some ghosts, and the heroes discovered the main party trick of the new wizard as he started summoning bottomless pits, including one directly underneath an injured road warden, who was promptly swallowed into despair. The warriors began to think hiring the cheapest wizard they could find was a bad idea. 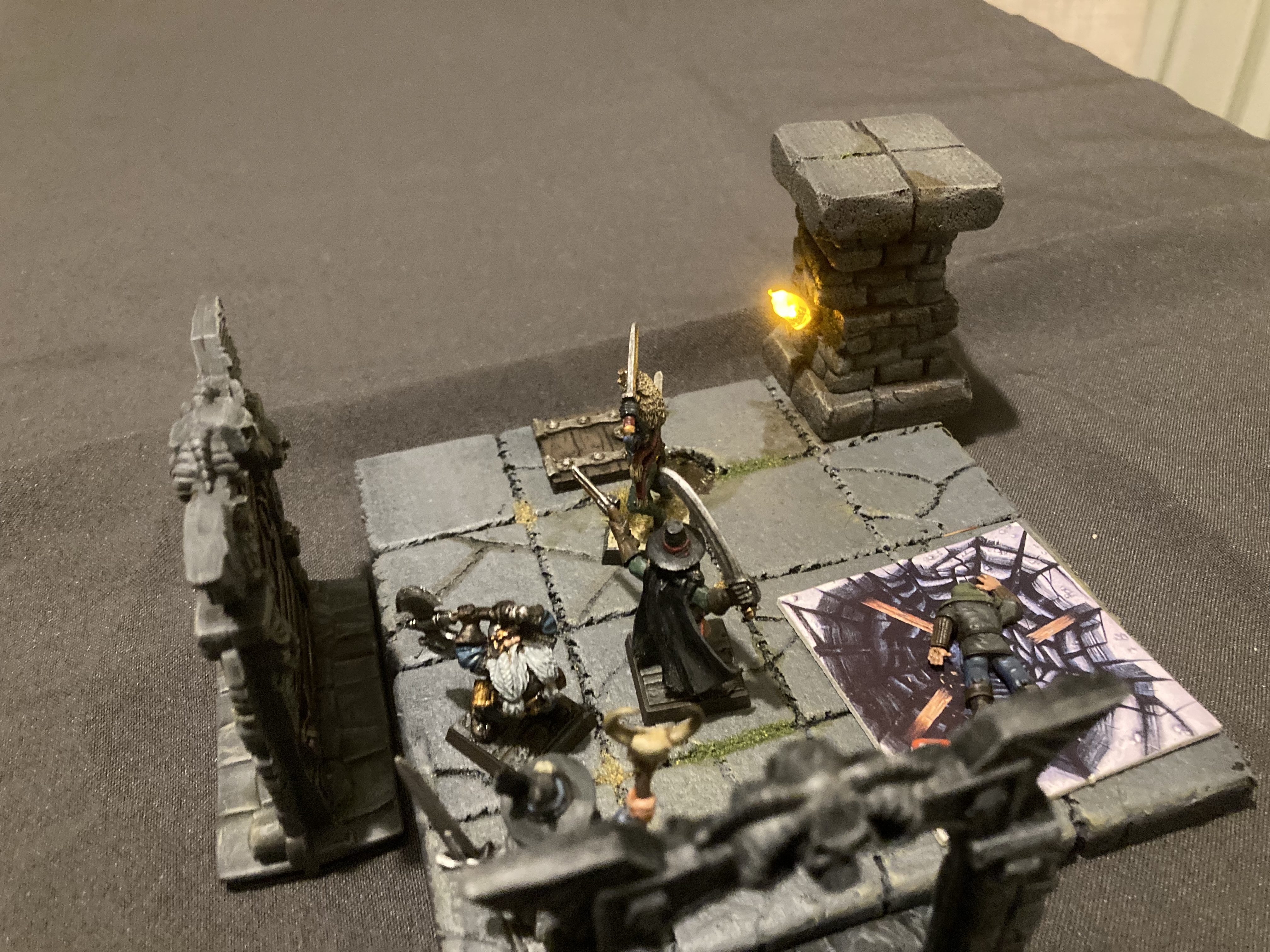 The heroes pressed on further, and encountered a room full of ghouls feasting on some carcasses, including a hulking Crypt Haunter who sat about the heroes with fury. The ghouls were dangerous enough, but the real threat was the wizard, who opened up two pits in the small room, killing a single measly ghoul and completely blocking the path into the dungeon. The heroes battled the ghouls and the impatient Wardancer attempted to leap the pits to reach the other side. The Wardancer proved to be a clumsy lummox however, and plummeted head first into the pit. 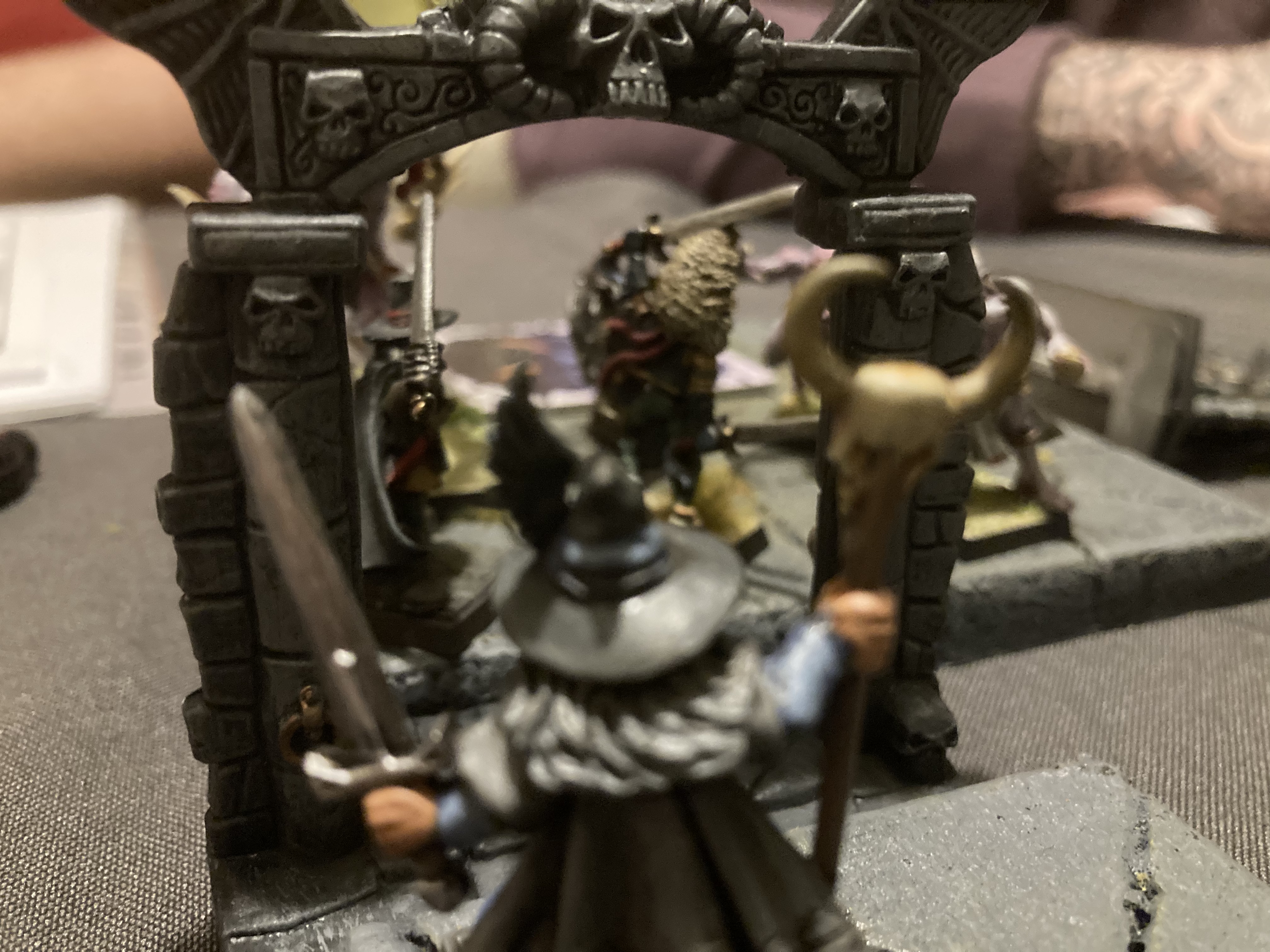 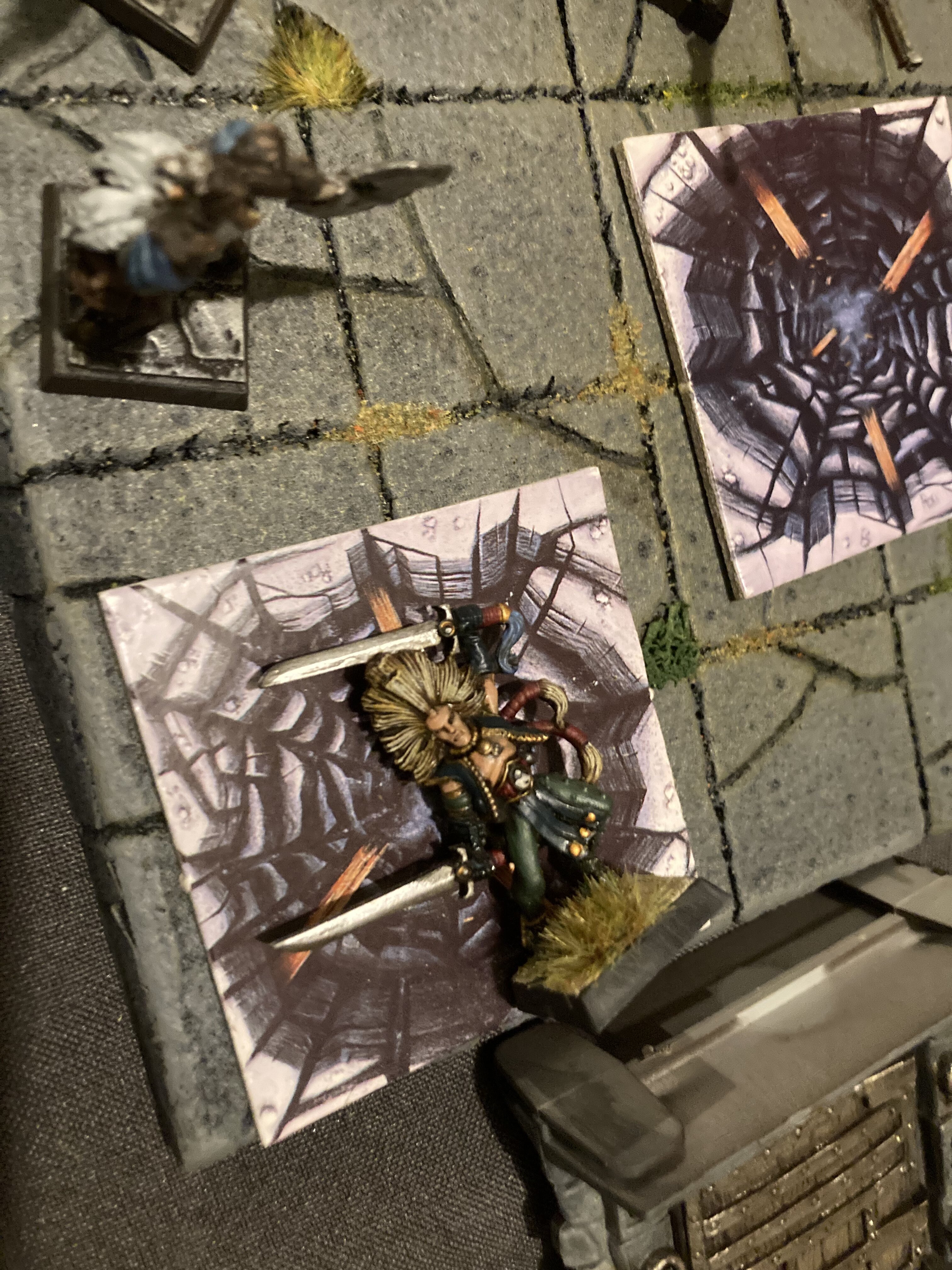 The heroes killed the remaining ghouls and once again sent the wizard abseiling into the pit to see if he could retrieve the Wardancer. Unfortunately, the rope they had was insufficient to reach the unconscious elf, and they had to press on for now, battling another horde of zombies and finding another road warden, this one beheaded and being snacked on by zombies. They killed the zombies and stripped the road warden of his clothes and dignity, fashioning the garments into a make shift rope extension. The heroes trekked back to the elf pit, and lowered the wizard back down to get the unconscious elf. Whilst being hauled back out, the rope started to break, and the wizard and elf had to shed their treasures in order to lighten the load. The Witch Hunter and Dwarf hauled the pair out, but the rope was damaged and had to be discarded. The party healed the Wardancer who would forever have an injured back, and they pressed on. 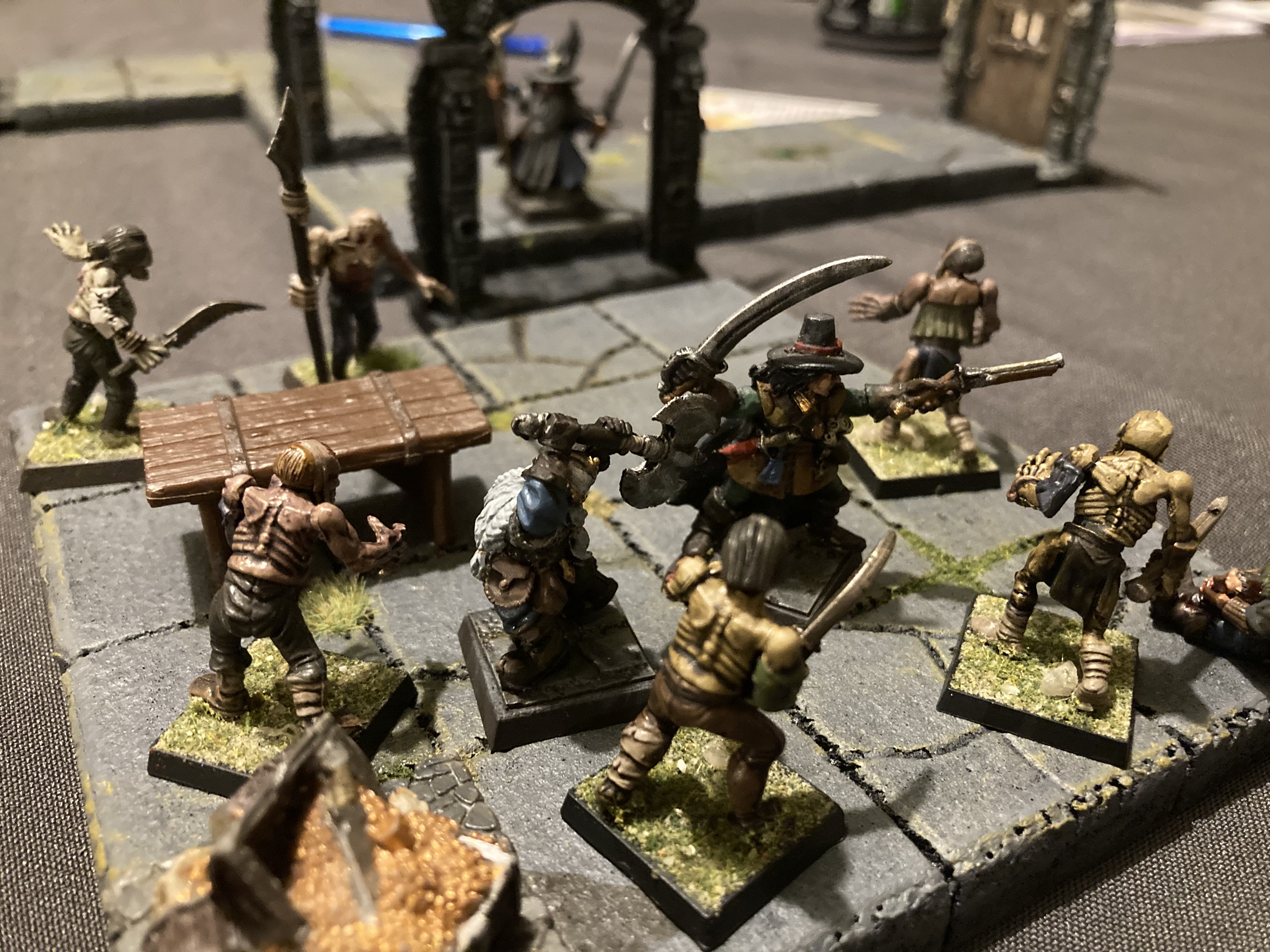 The heroes booted in the door of the lair of a necromancer, and tackled the horde of ghouls and zombies that served him. The wizard once again starting throwing pits around, the Necromancer proving spry enough to dodge the one pit that could have claimed his life. The heroes had a bitter war with the undead hordes, but eventually they got their hands on the spell caster and slew him and his remaining minions. 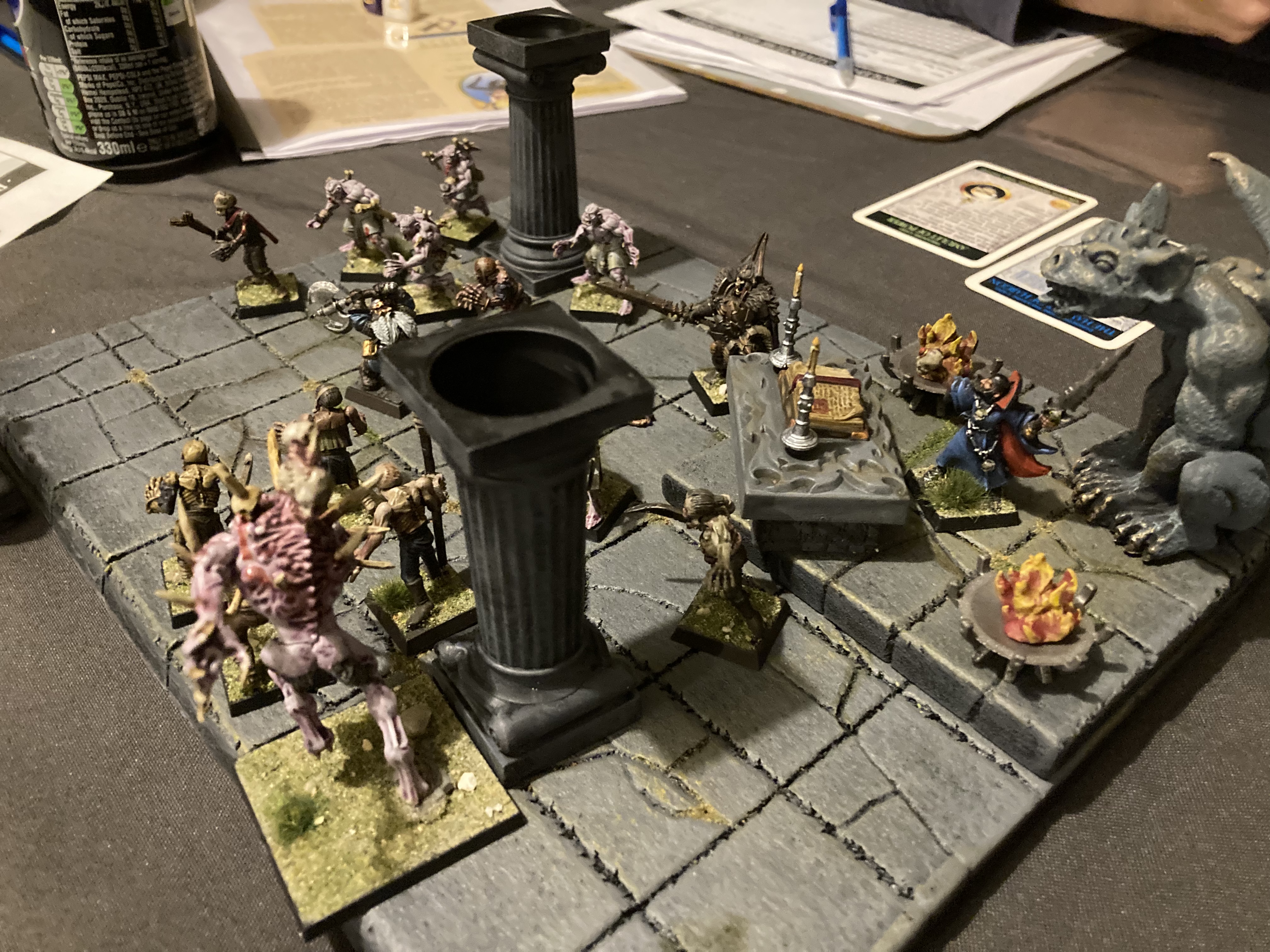 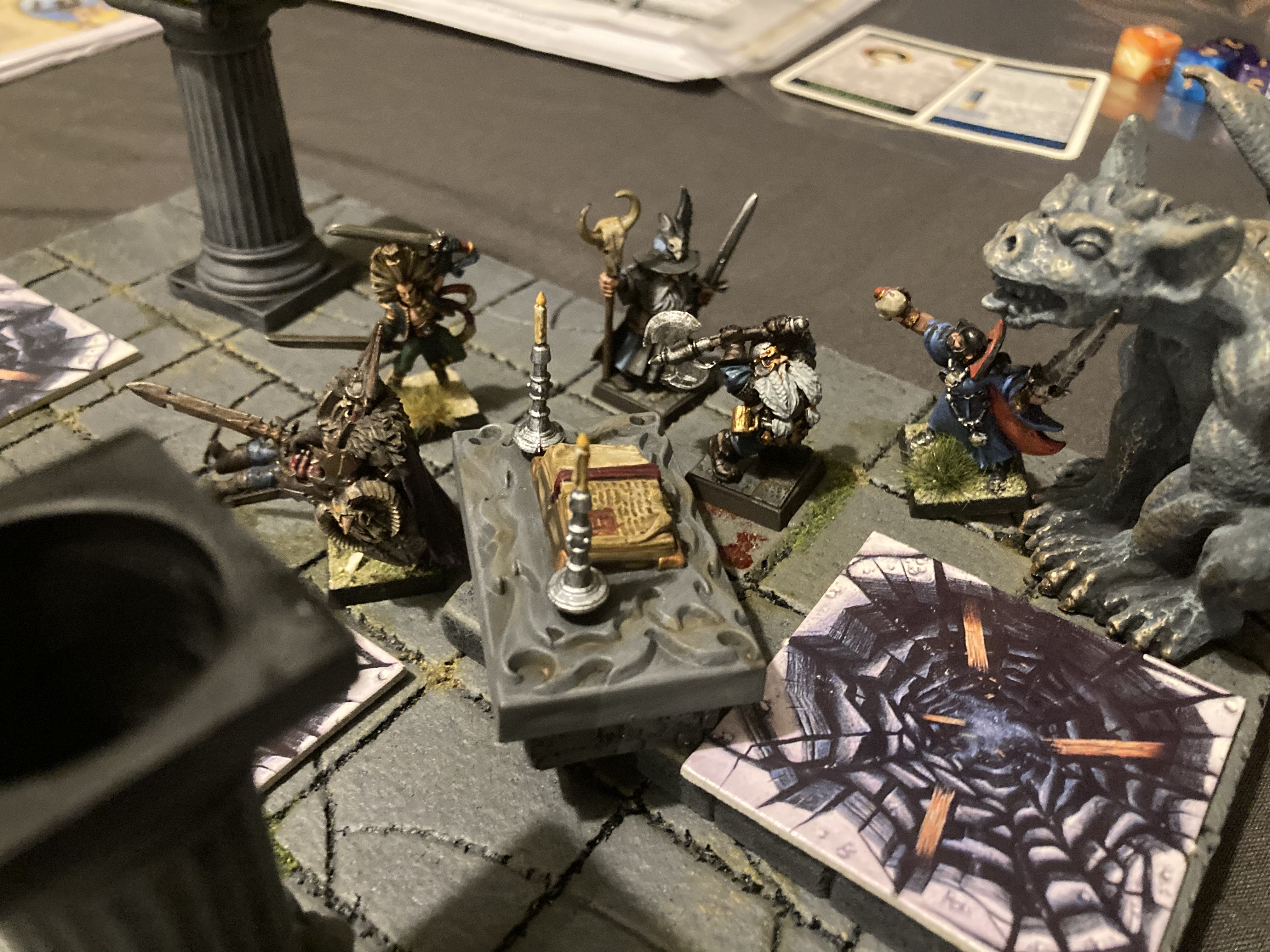 The trek back to civilisation saw them rescue the daughter of a baron, and life in town proved riotous for the wizard who seemed hell bent on spending all the party’s gold in the ale house. The heroes healed up, got some goodies, and levelled up the remaining party to level 2, ready for more dungeon fun next time.
Reactions: Biggle_Bear, RancidWalrus, Ben_S and 2 others
Show hidden low quality content
You must log in or register to reply here.