The Close Combat thread is now summarized through post 224.

Side-note:
I laugh at the post counts in the other baby threads.
YES - This is a competition.
Say it. SAY THE WORDS!
Last edited: Oct 9, 2020
Reactions: JawRippa, Thorgor, Spenetrator and 1 other person

Side-Note: Casualty is the winner.
There, I said it...
Reactions: Al_Weeks
C

Thank you. You really don't know how much that means to my shallow, empty soul. ;-)
Reactions: Spenetrator

1: Any threads I can take to update the document?
2: When are we planning to call time on the suggestion phase (especially with regards to the core rules?)
C

I vote we call it now. We're way over the time per Topsy's original statement of intent...
Reactions: TopsyKretts and Al_Weeks

I'd be onboard with that. I went through the document this afternoon and added about 3 minor things that I'd noticed had been missed.

I think we can move on (at least in the core rules section), and if we've missed any points then we will probably notice that quickly in the next phase.

On the survey I'm now up to 22 responses and getting a good number of well thought out and structured comments in the free field sections.

But obviously it would be great to get as much data as possible.
C

Okay, time to move on! We have more than enough suggestions, and we can re-iterate in the future to cover anything we miss now.
Reactions: Al_Weeks, JawRippa and Thorgor

TopsyKretts said:
Okay, time to move on! We have more than enough suggestions, and we can re-iterate in the future to cover anything we miss now.
Click to expand...

Ok so I guess that mean we need to allocate the work out for the next phase.

We will publish a plan during this day.
Reactions: Casualty and Al_Weeks

Just so everybody knows, a plan is currently being agreed on. The writing crew will be taking a leading role in the discussion phase, as we offer up potential rule changes to the wider group through new threads.

The idea is for us to open a new thread for each section (starting with general principles), raise a suggested change, check that everybody agrees, and then (assuming we reach some consensus) codify it into a new document.

At the moment we're trying out a few ideas to ensure we don't get extra ideas being debated in out of sequence, as we need to have some measure of control over the conversation at this point. But I'd expect for clarity to be achieved by the end of the day, so expect to be invited to a Writing Crew conversation soon.
Reactions: Al_Weeks and TopsyKretts
T

A new document is up for decisions: 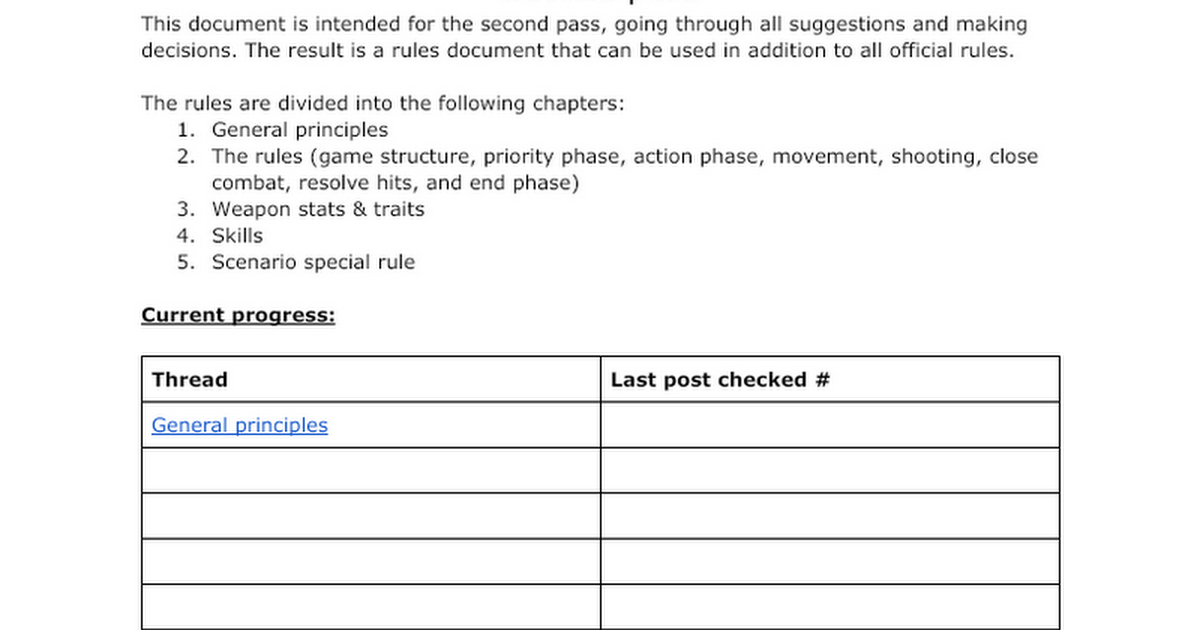 YCE (Yaktribe Community Edition) Decisions For N20+ Second pass This document is intended for the second pass, going through all suggestions and making decisions. The result is a rules document that can be used in addition to all official rules. The rules are divided into the following chapte...

Editor access should be granted to all of those who had it for the suggestions document.

We should delete the 'General Principles' suggestions, but I left them there for the time being (it is what we will start with for decisions).

I think @Orngog has some clever ideas on how to format this?
Reactions: Al_Weeks

I have thoughts, yes.

We need to ensure that we are only discussing one rule change at a time, so I suggest we start each thread with a clear announcement of such, and use a bold text header for each new proposal, such as the post below:
Reactions: Al_Weeks

Activating a character in the standard way awards two Action Points, and Actions have a cost of one or two points.

This change clears up the difference between simple, basic, double and tactics-given actions.

An underlined title, with proposal number for reference.

A quick explanation of the new rule.

And a description of the benefit this change will bring.
Reactions: Spenetrator

Now there are a lot of alternate suggestions at current, we only need to choose one to raise. We the writing team will decide which to offer up, as the most invested in the project I believe we have the best eye for this. Discussion on which point to raise next will be hosted here.

I believe the criteria for the ideal suggestion to propose is as follows:

Continuity- the least radical change is one most likely to be accepted.

Simplicity- the easier the game is to play, the better.

Efficacy- the reason for suggested changes should be resolved by the proposal.
Reactions: Al_Weeks

The Playtesters have requested an alpha version of the finished document to trial, would anybody here be willing to help us compile this? It would be a heavily slimmed down version of the suggestion document.

Orngog said:
The Playtesters have requested an alpha version of the finished document to trial, would anybody here be willing to help us compile this? It would be a heavily slimmed down version of the suggestion document.
Click to expand...

No decision has been made yet. We are weeks away from any kind of finished document. What is there to playtest?
Reactions: Al_Weeks

@Thorgor I would direct you to the Playtest thread for details.

Well, best we can do imo is priorise no-brainer decisions so that they get a bunch of small changes to playtest first, but those decisions still need to be made and we still need time to write them properly.
That's not something that any one person can do, and it will take days/weeks.
Reactions: Al_Weeks
Show hidden low quality content
You must log in or register to reply here.
Share:
Share Link
Top Bottom